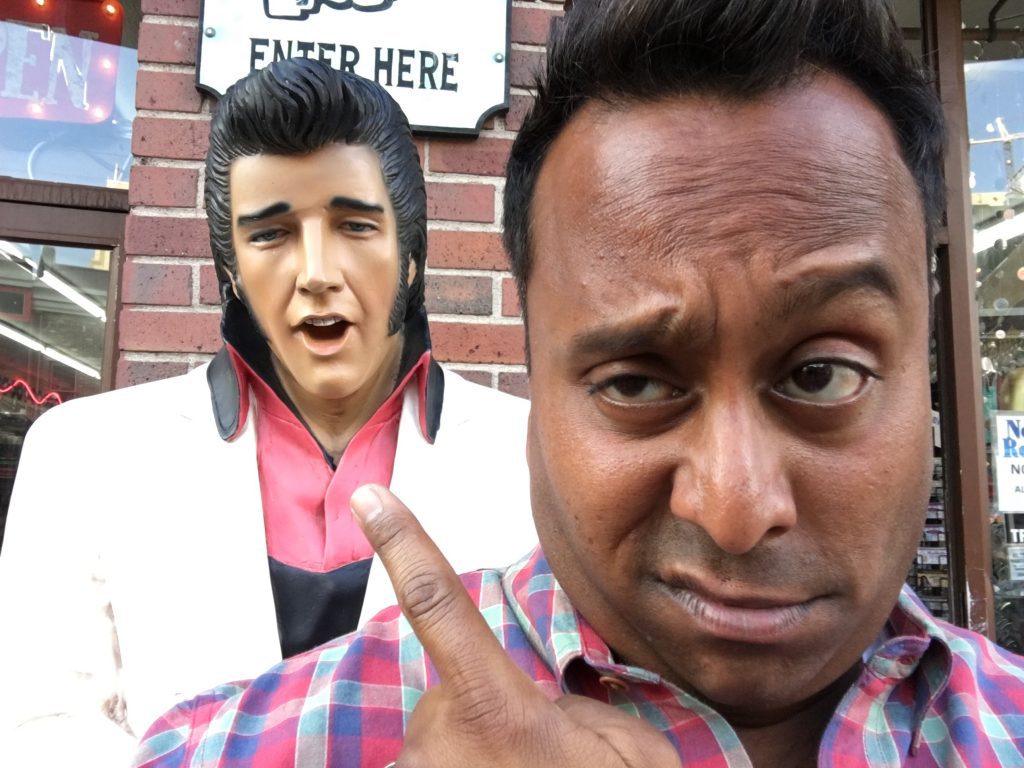 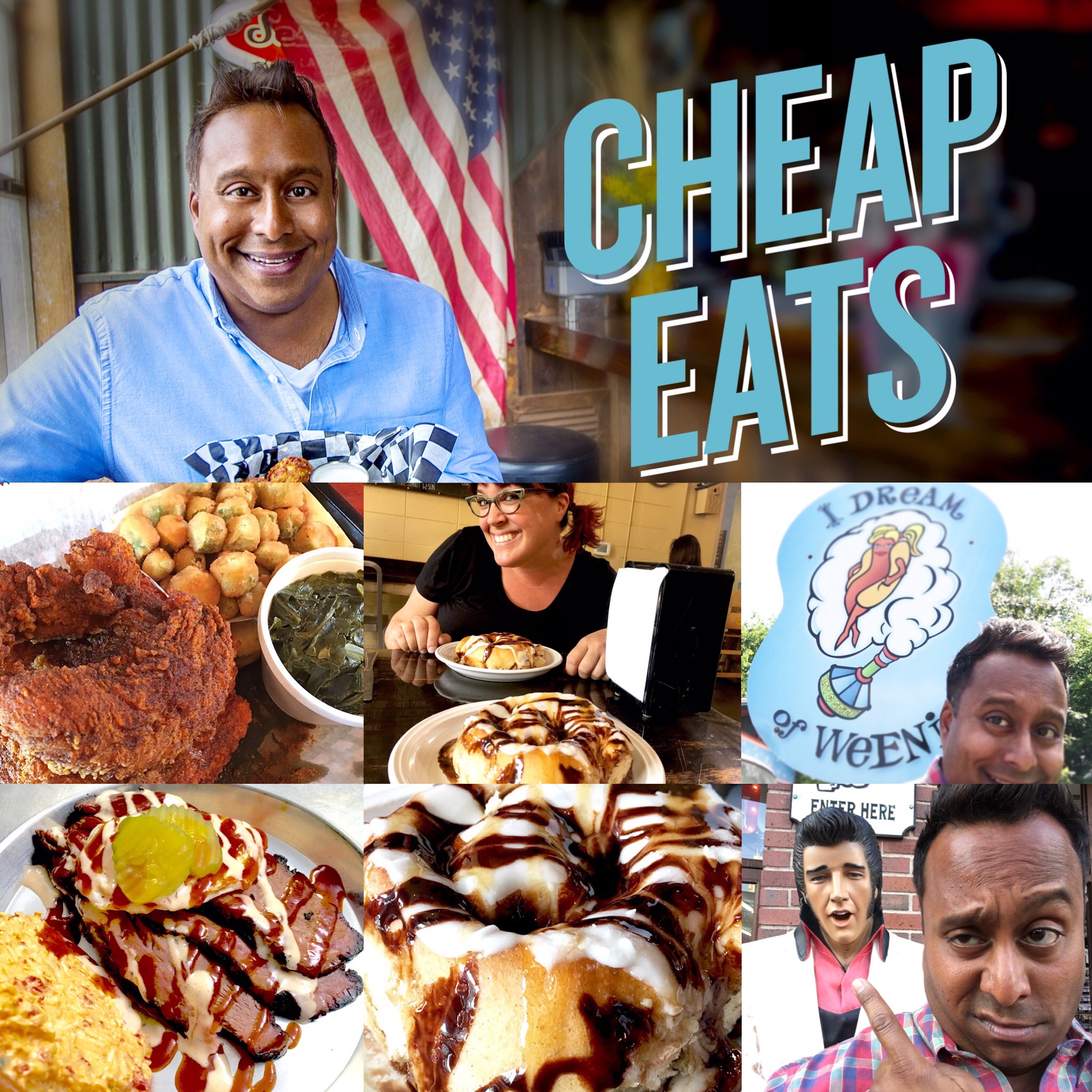 Nashville. Aka Music City. This town has certainly earned a reputation for music and with a music scene comes hungry musicians looking to eat cheap and well. And that we found my friends but I would be flat out lying if I didn’t tell that I had one thing on my mind when we came here: Nashville Hot Chicken. In my 20s, those jovial and carefree years, yours truly was a bit of a hot head. I craved, sought out and created the spiciest food imaginable. If Man v Food was running in the early 2000s, I would have been primed to take on that gig. But that volcanic appetite eventually would settle, becoming almost dormant if you will, unless a particular hot wing or Thai curry happened to come my way. Now I wasn’t looking to become the next Adam Richman on this episode of Cheap Eats, in fact I tried that once on an off day shooting in Jackson Hole last season and the lesson I learned is shooting 12 hours a day on a weak tummy is a bad idea. Still, I wanted to at least experience some heat. And if you saw this episode, I certainly did. But Nashville is more than just spicy chicken, it is a land of Cheap Eats so grab some napkins and lets dive in! 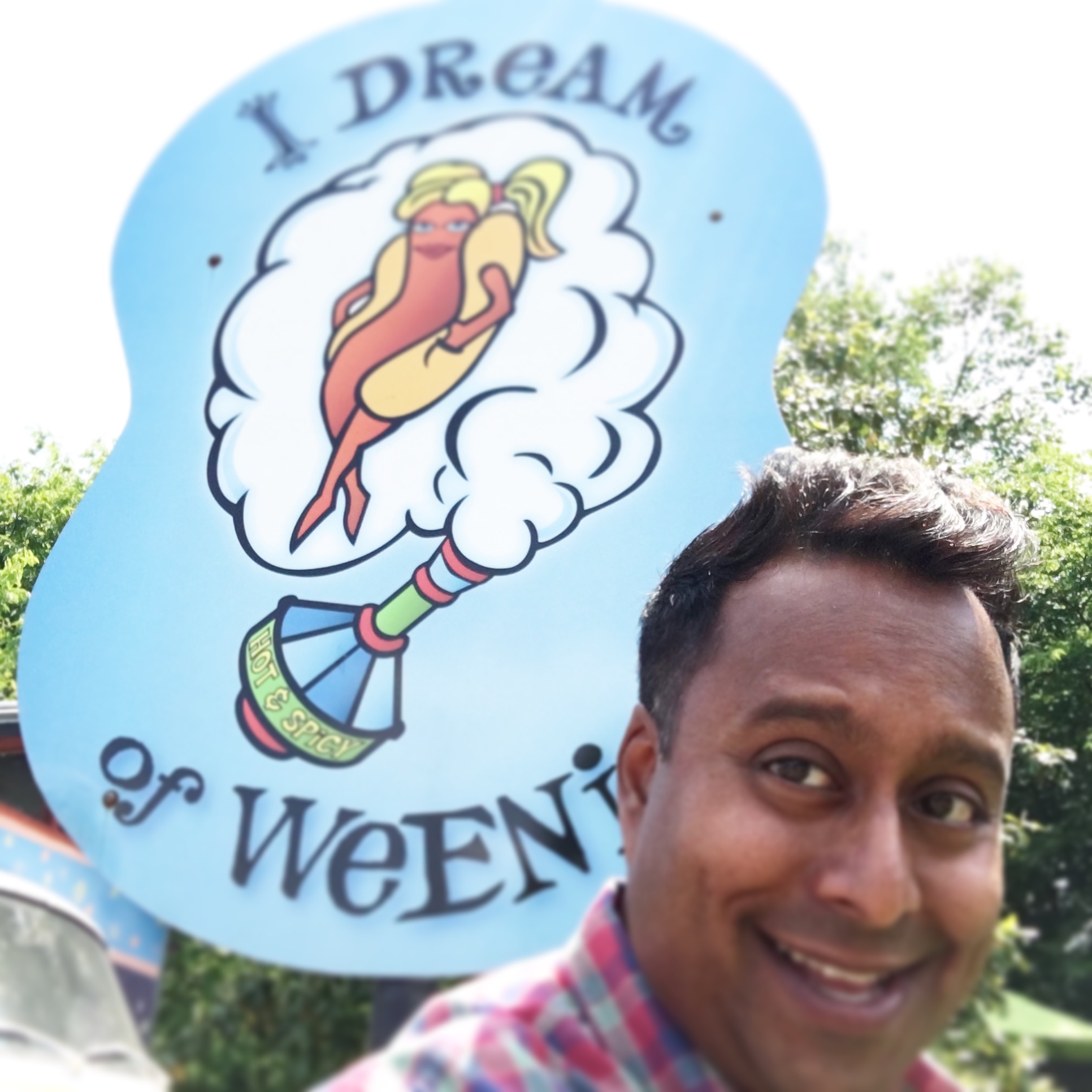 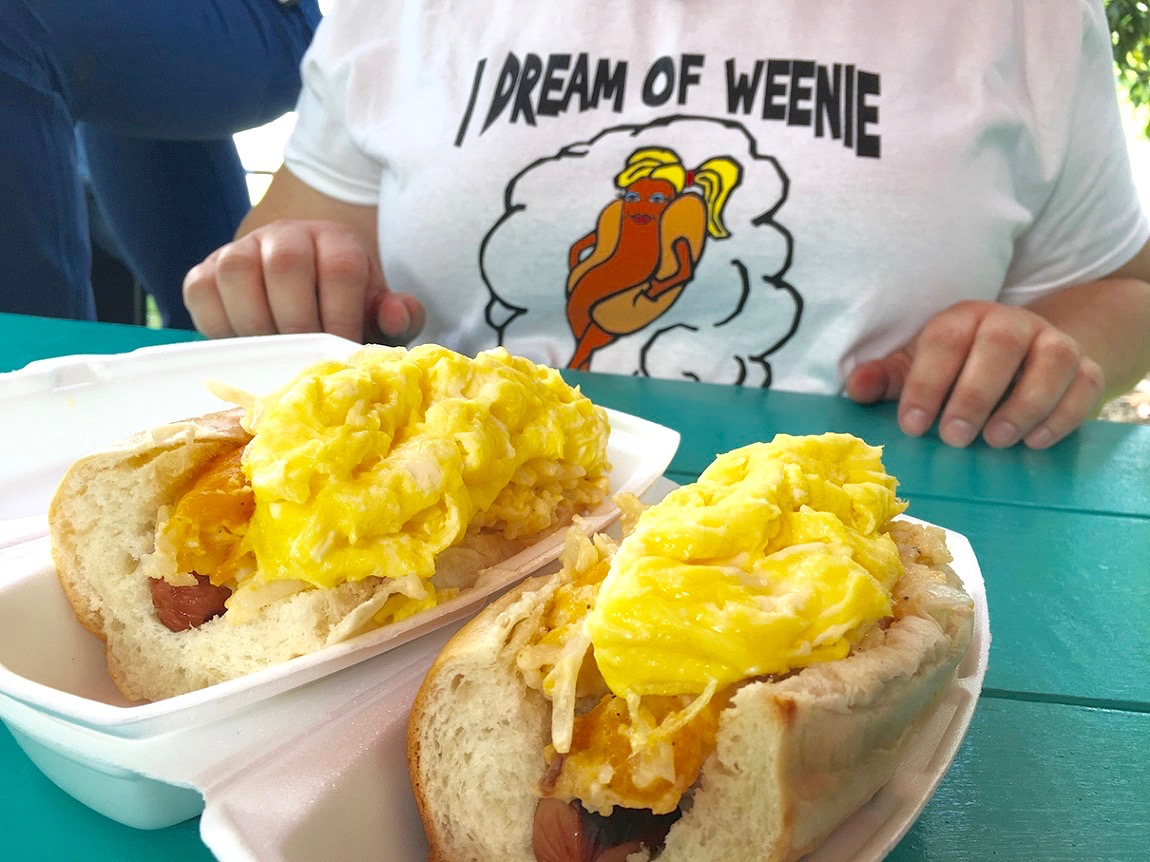 The Vitals:
the spot: I Dream of Weenie 113 S 11th st Nashville, TN 37206
the eats: Hash Brown Casserole Weenie
the bucks: $5 (with egg)
the full nelson: and your mother said you can’t have hot dogs for breakfast

Hash browns are the ultimate breakfast potato. Over a span of 20 years eating in the diners of Los Angeles, the sight of this fine golden griddled starch was few and far between. For some the mantra is: throw an egg on and it is breakfast. For me it is: throw some hash browns on there and I will take you up on an offer to eat hot dogs for breakfast. The play here at I dream of Weenie, which by the way is proof that food truck culture is invading all hipster corners of the Universe, is a hash brown casserole on top of a charcoal grilled Oscar Meyer all beef hot dog. The casserole is not for dieters: butter, sour cream and condensed soup are mixed with the hash browns and then baked in an oven. The casserole is reminiscent of Hot Dish: a tater tot casserole that we featured back in the Minneapolis episode of Cheap Eats. When I asked what the appeal of Hot Dish was, a Minnesotan promptly responded “spend a winter here”. Well it doesn’t get too cold in Nashville but it is a hard drinking town, so expect to find some hung over hipsters at I Dream of Weenie looking for a quick fix while they are waiting to score brunch at a restaurant with an hour plus wait. Yes my friends, I Dream of Weenie is actually a pit stop for those looking to brunch that hard in East Nashville. As for me, I was happy to pay my $5 for a hot dog topped with a two egg breakfast (hash browns included) and move on to lunch. 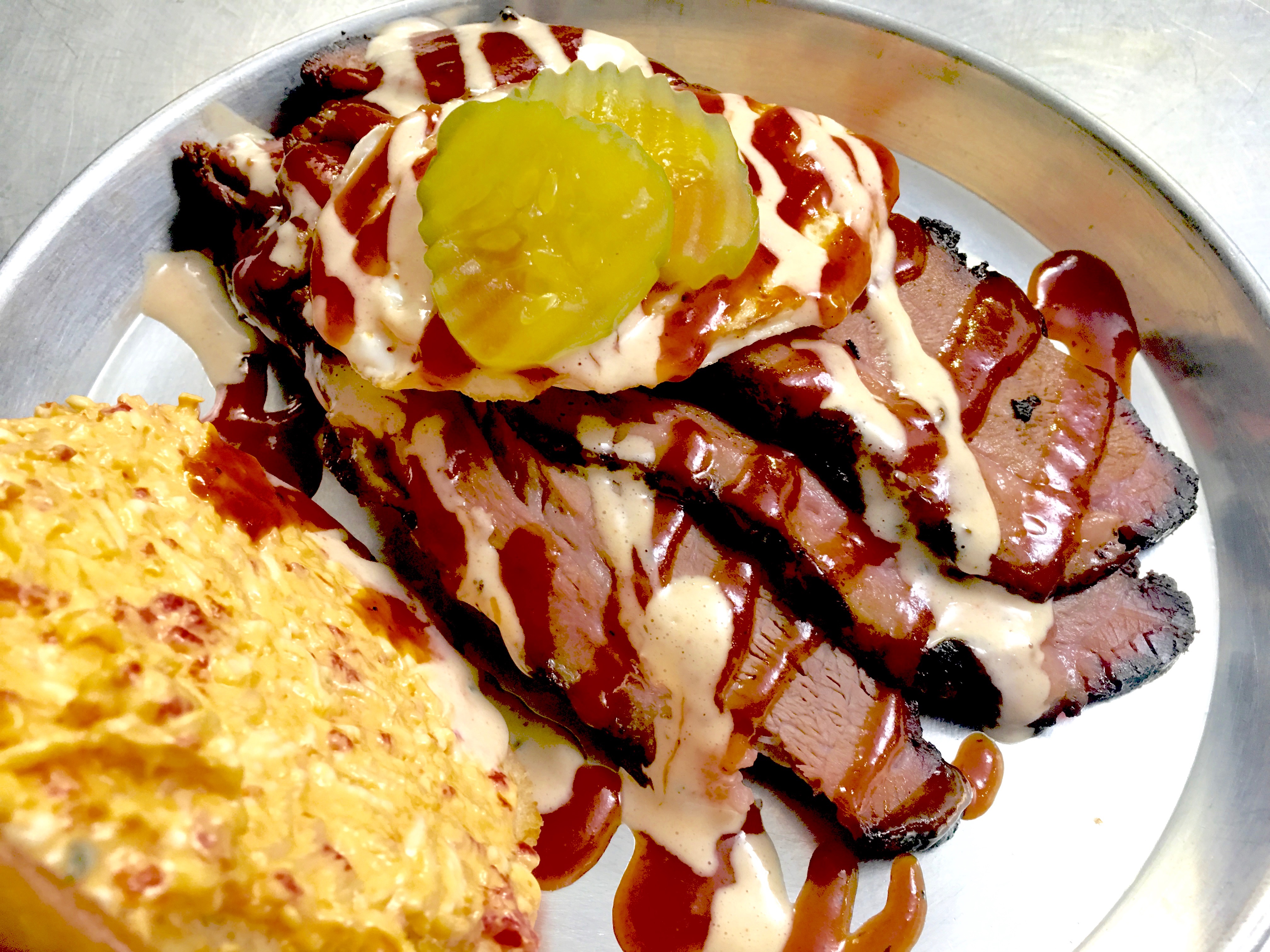 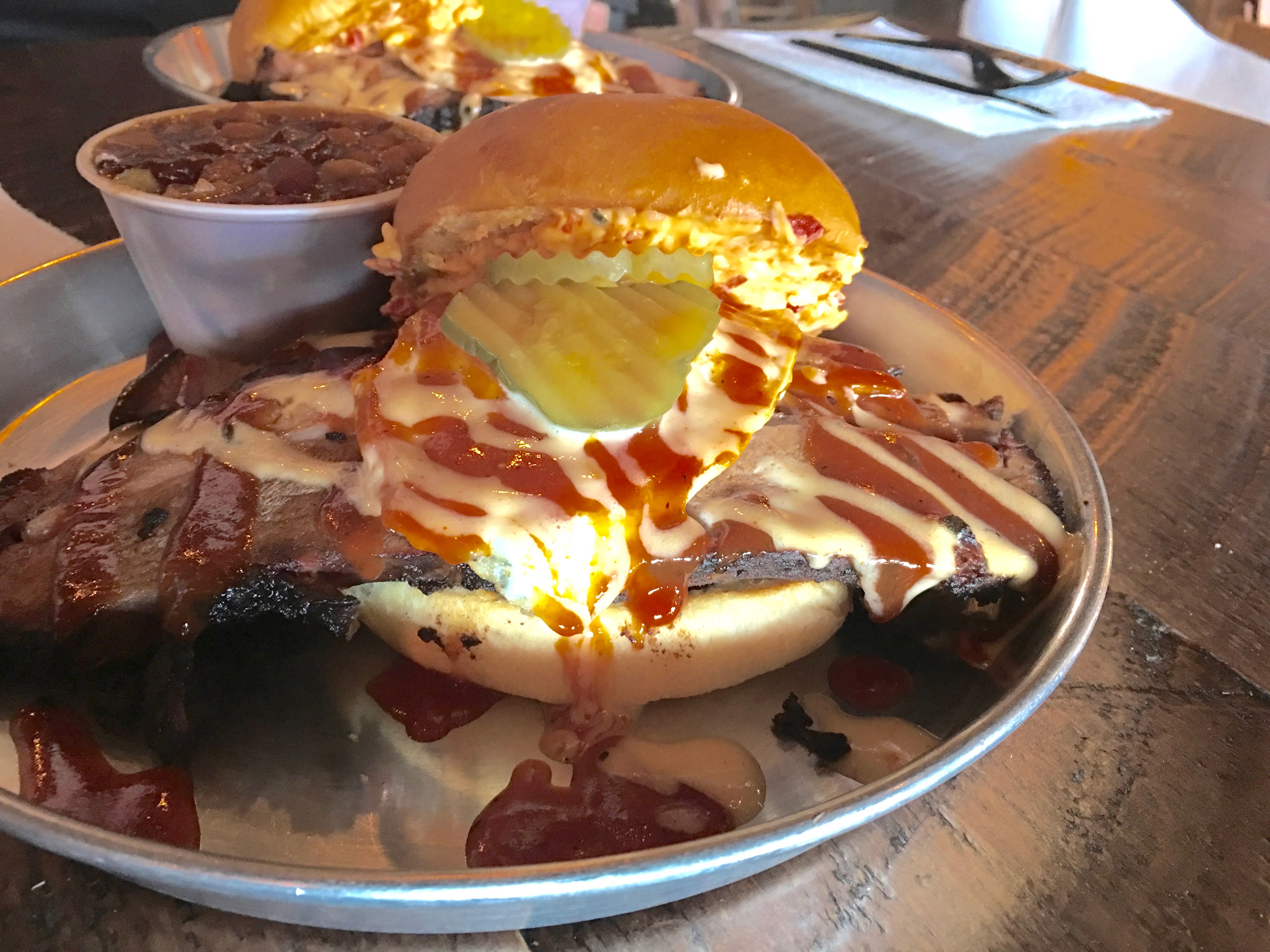 The Vitals:
the spot: Edley’s BBQ 270612 ave south Nashville, TN 37204
the eats: Tuck Special
the bucks: $8 with a side
the full nelson: the sandwich that was voted best in Nashville needs plenty of napkins

You can’t call Edley’s “Nashville barbecue” because as of now there really isn’t a commonly understood style here. However you can call Edley’s bold and creative when it comes to traditional bbq, traits that one day could define what Nashville barbecue really is. Scan the menu here and you will come across tacos stuffed with pulled pork, a bold move that screams 21st century pit master and happens to be a huge fav of mine at Valentina’s Tex Mex BBQ down here in Austin. But tacos were not meant to be on this particular day of Cheap Eats in Nashville. Instead I went for one double fister of a brisket sandwich and I probably obliterated a rain forest worth of trees because I used a lot of napkins. The Tuck special, which was voted best sandwich of Nashville, starts off with a 12 hour smoked brisket, topped with a duet of bbq sauces, one tomato based and the other mayo and vinegar based, a spicy pimento cheese and a fried egg, sandwiched in a bun. Needless to say, the bun fell way short on accommodating all that food porn. And many napkins gave their lives so that I could score one heck of a sandwich for $8. Great meals often come with great sacrifice. But when one on is working to create a whole new regional style of barbecue, things can get messy. I suppose I should go plant some trees. 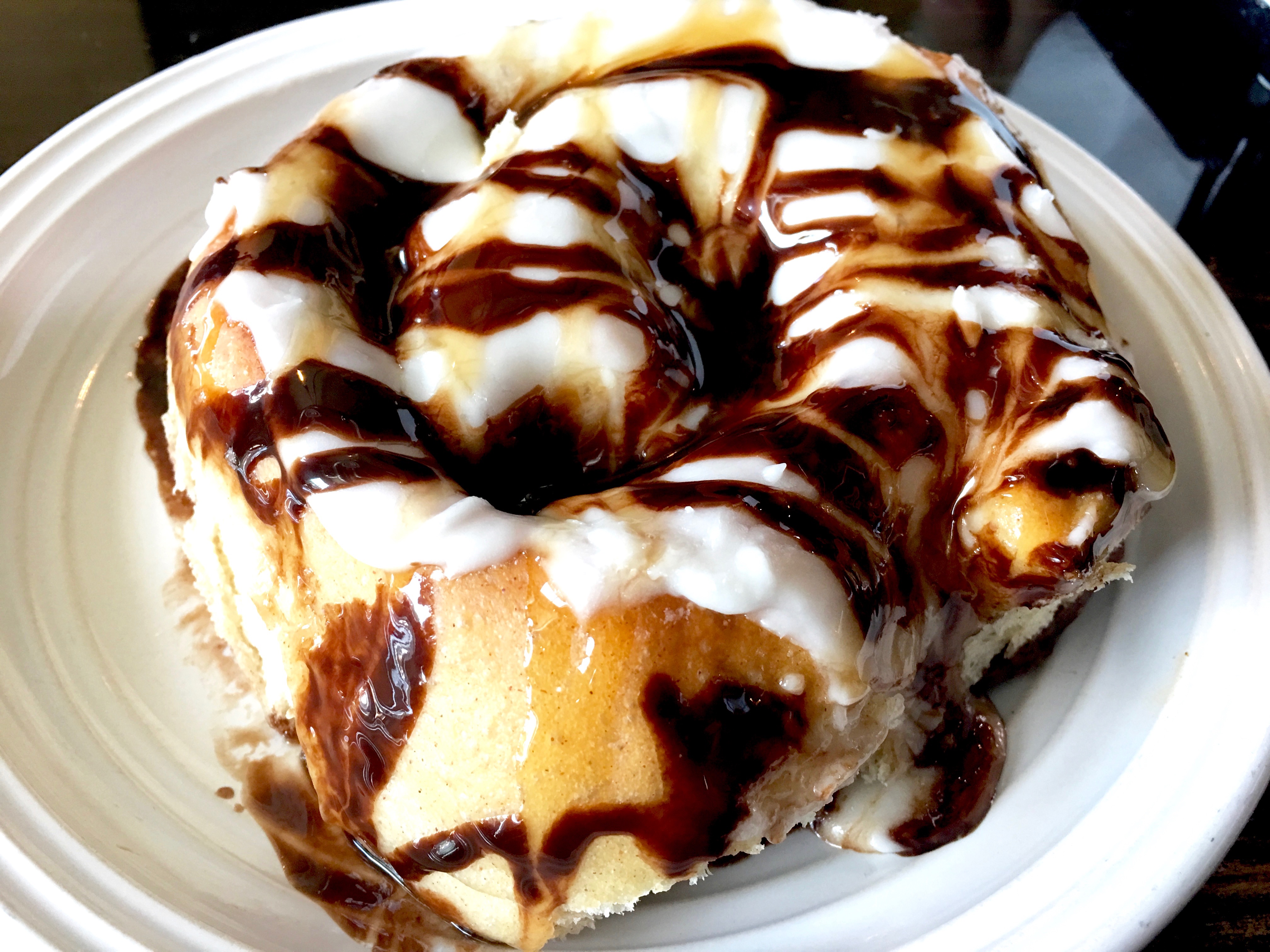 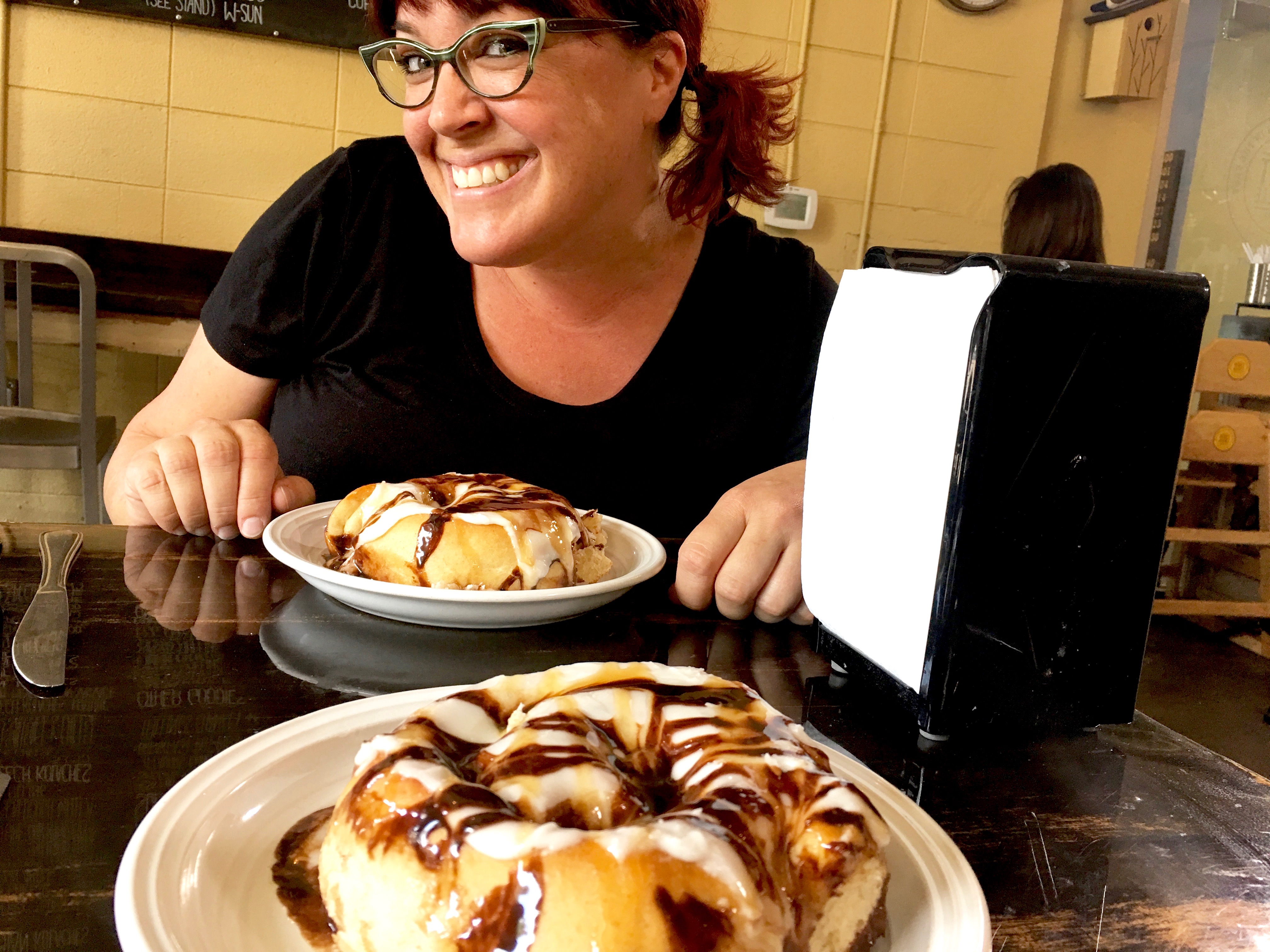 As I sit here typing up this blog post I am also hunkered down for Hurricane Harvey, my first hurricane and my first hurricane as a resident of Texas. When I met Sara Way, a Houston native, we immediately bonded over Kolaches, a Texas pastry treat by way of Czech immigrants and the staple fare at Yeast Nashville. We bonded a bit over Texas as well, her being a transplant from Texas while I was a transplant to Texas. Still, at the time we shot, I hadn’t hit the two year residency mark and I definitely didn’t have a hurricane under my belt; I had not yet felt like I was “from Texas”. Today, with the rain coming down and alerts flooding my iPhone, I feel more bonded to the Lone Star State, and to Sara Way, for bringing Kolaches and a bit of herself to the food scene in Nashville. Now we didn’t go for the Kolcaches as our snack on Cheap Eats, we went for the Chocolate Chocolate Cinnamon roll and the reason was not size(though they are as big as your face), it was evolution. Sara has introduced the world to a cinnamon roll that rocks the chocolate. It is common to see cinnamon rolls drizzled with icing but it begs to ask the hungry Cheap Eater: why stop there? Yeast Nashville certainly doesn’t because they drizzle there cinnamon rolls with chocolate and caramel sauce. Now you might be inclined to ask “Ali, why is it called Chocolate Chocolate Cinnamon Rolls?” Well, peek in the dough and you will see chocolate chips rolled in there as well. Yes my friends, we are indeed talking cinnamon roll evolution to the tune of chocolate. And made by a fellow Texan as well. 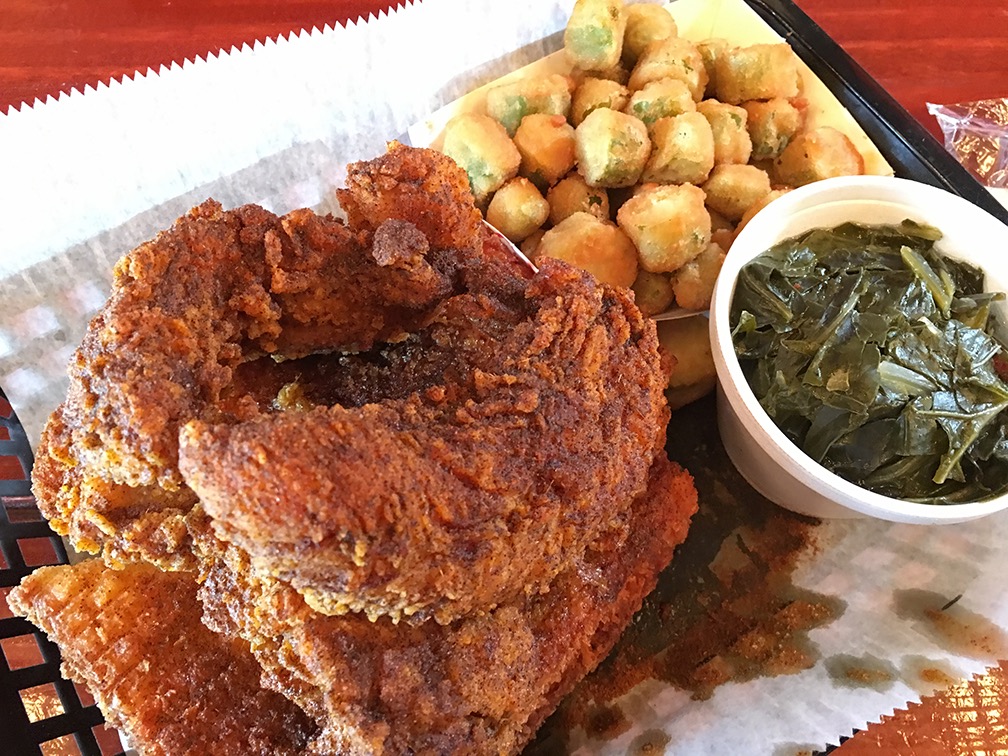 Nashville Hot Chicken has become a nationwide phenomenon with restaurants slinging the spicy chicken as far east as Atlanta all the way to LA. Despite its grand unveiling at the legendary Prince’s of Nashville sometime in the 1930s, it seems in the last few years many more players have entered the hot chicken game. Pepperfire is indeed one of them and much like the cultish following that Hot Chicken draws, Chef Issac Beard also became obsessed with the spicy bird. In this age of food specialization and comfort food being elevated above haute cuisine, the whole hot chicken craze does make sense. And though I am a far cry from the hot head I once was back in my 20s, the pain is worth it. Aside from chicken fried just to the point of doneness, marinating the bird is key and Pepperfire complies with a spice loaded brine. But this isn’t just a plate of Hot Chicken my friends, this is also a deep fried grilled cheese sandwich as well. I have to say I walked out of Pepperfire, heck, Nashville feeling a little heavier. I suppose Music City wouldn’t have it any other way. For $12, you definitely get your calories worth of Cheap Eats + a true Nashville Hot Chicken local favorite.

And that is Music City folks! Much like my new home base of Austin Texas, Nashville is growing leaps and bounds and the food scene is growing with it. Honestly, I really do want to go back soon and taste just a little bit more of Music City. And who knows, maybe I’ll channel my inner 20 year old and go buck wild on some super spicy Nashville Hot Chicken and maybe some more Edley’s. This time I’ll bring plenty of napkins. And some tums.

3 responses to “Nashville in Requiem”