This Big Mac Slider has a name: Tater Mac 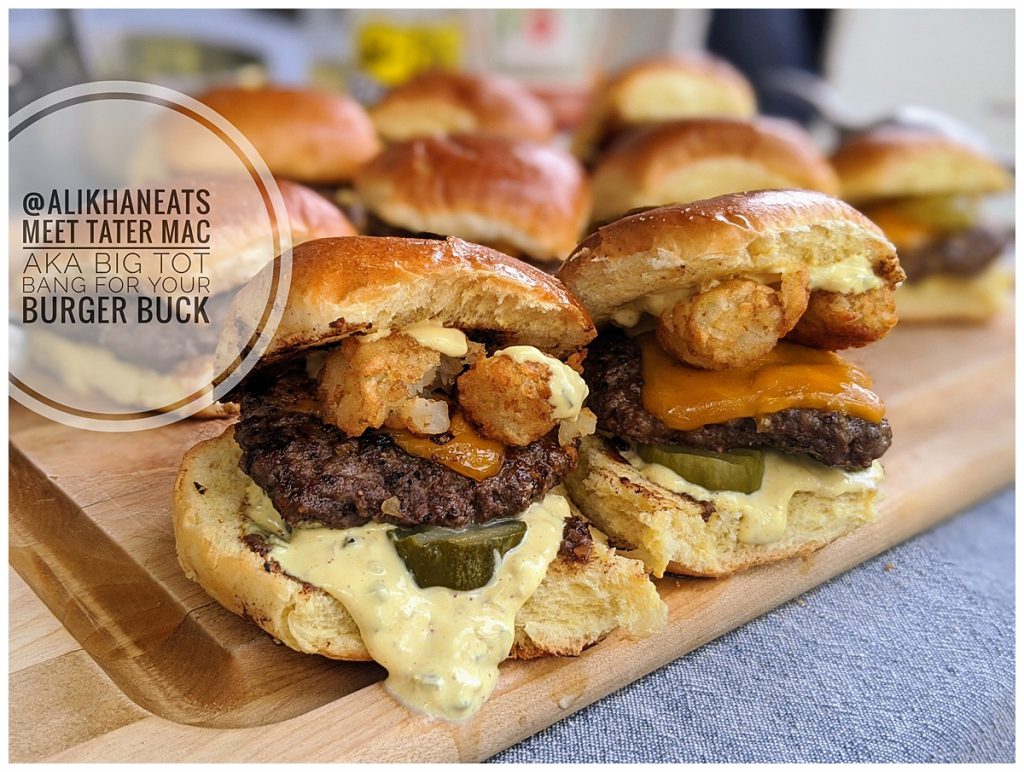 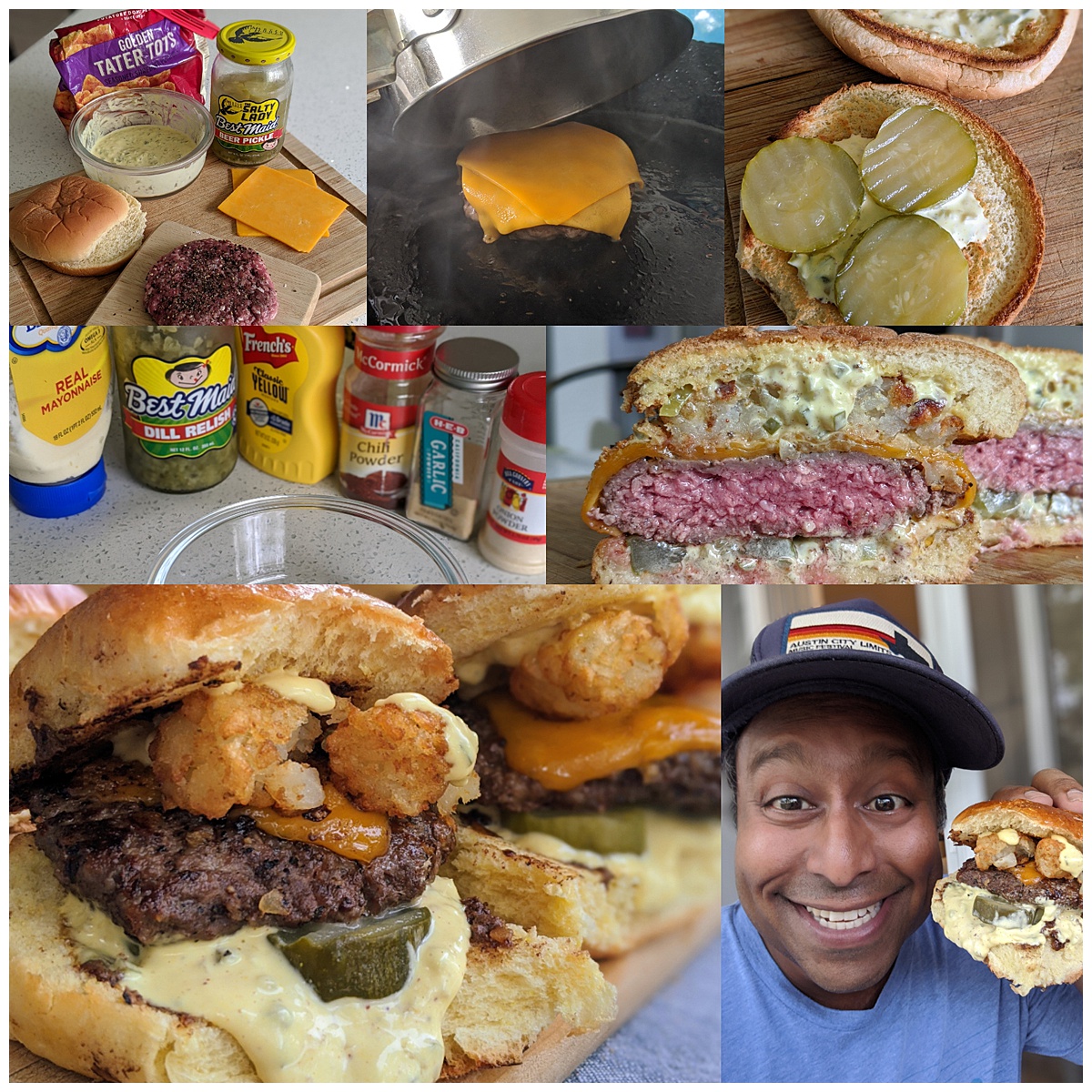 Big Mac Slider could have been the best google search I could have done lately, second only to my search for Big Mac Sauce. If you have been keeping up my recent wave of recipes; you may have caught my previous slider recipe: White Castle in your own Castle. Well now it’s time to take on a Big Mac Slider.

Meet Tater Mac: my take on a Big Mac Slider. 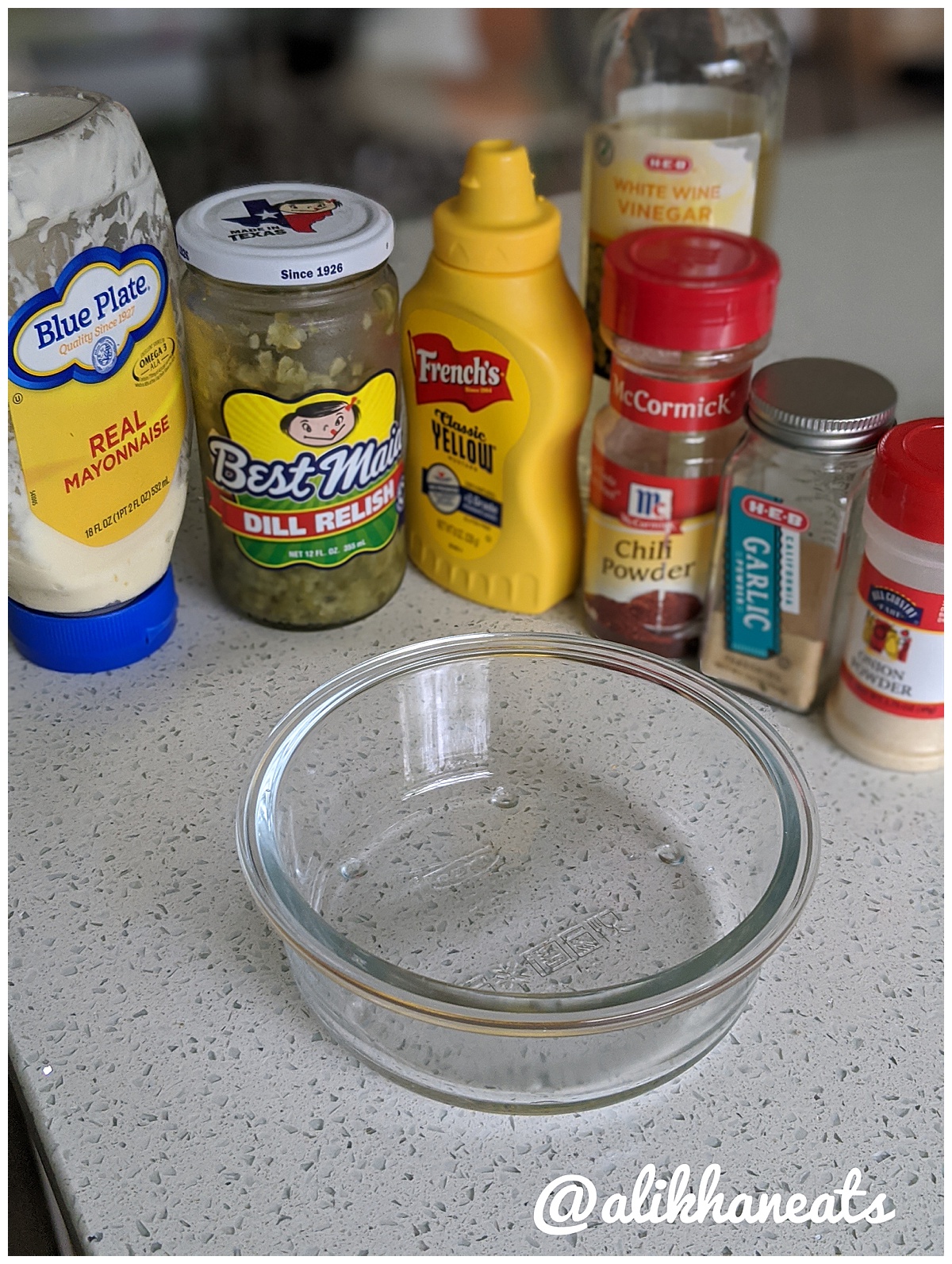 First off, let’s just get down to the magic: Big Mac Sauce. No, it’s not just Thousand Island dressing, it is in fact a mustard infused cousin. I found this recipe, based my portions on it and felt very satisfied with the results. I am a sucker for Thousand Island so anything with mayo and relish will float my boat. I suppose I could try this out side by side with an actual bottle of Big Mac sauce but I think you will find this stuff is magic. 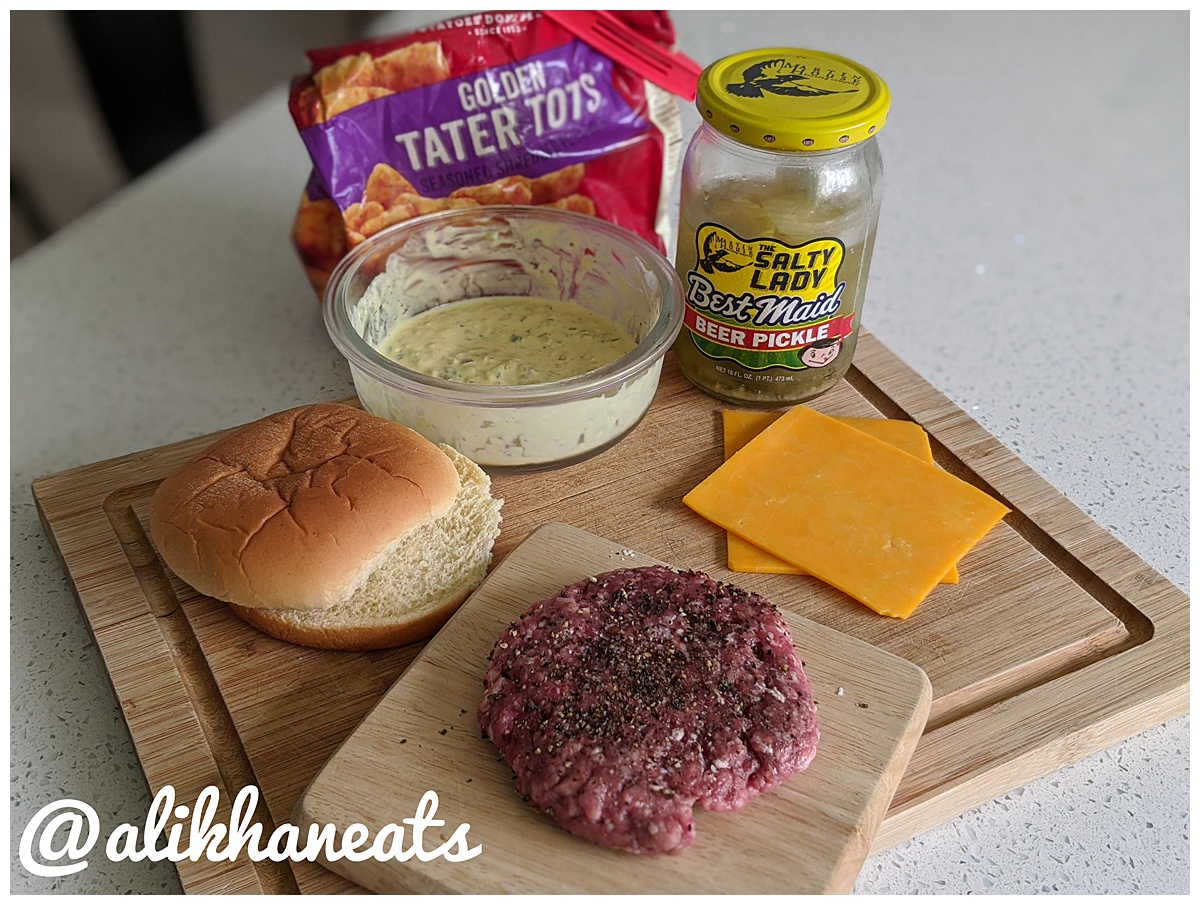 Making the sauce is as easy as dumping all the ingredients in a bowl and giving it a stir. Now, my initial Big Mac Slider wasn’t a slider at all. My patty was close to 4oz. Still the basics applied and no I didn’t add a third slice of bread. C’mon guys, I have a figure to keep up. 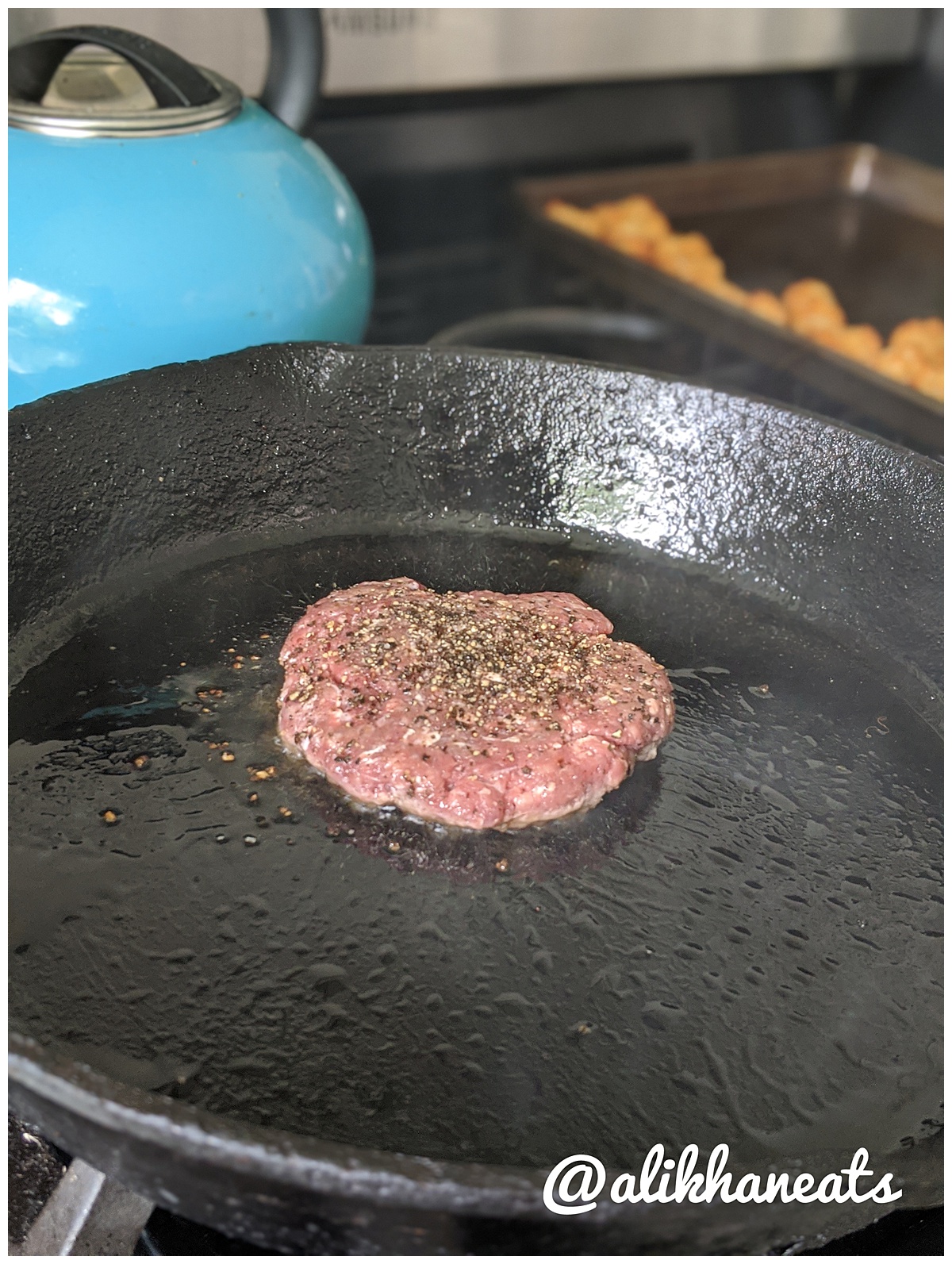 If you look close you’ll see some tater tots cooked nice and golden in a basking sheet up and to the right of that sizzling patty. 25 minutes in a 425 degree oven and that’s all she wrote folks, or just read the instructions on the back of the box.

Now why did I add tater tots? Well I made a Big Mac slider before this version and what was missing was a crunch. Of course that’s what Iceberg lettuce and raw onion is for right? Well I didn’t have that on hand plus it’s a pandemic and I can’t exactly run to the store for every little item that pops up. So I went with what was in the freezer: tater tots. Plus they remind me of one McDonald’s greatest culinary contributions: their hash browns. 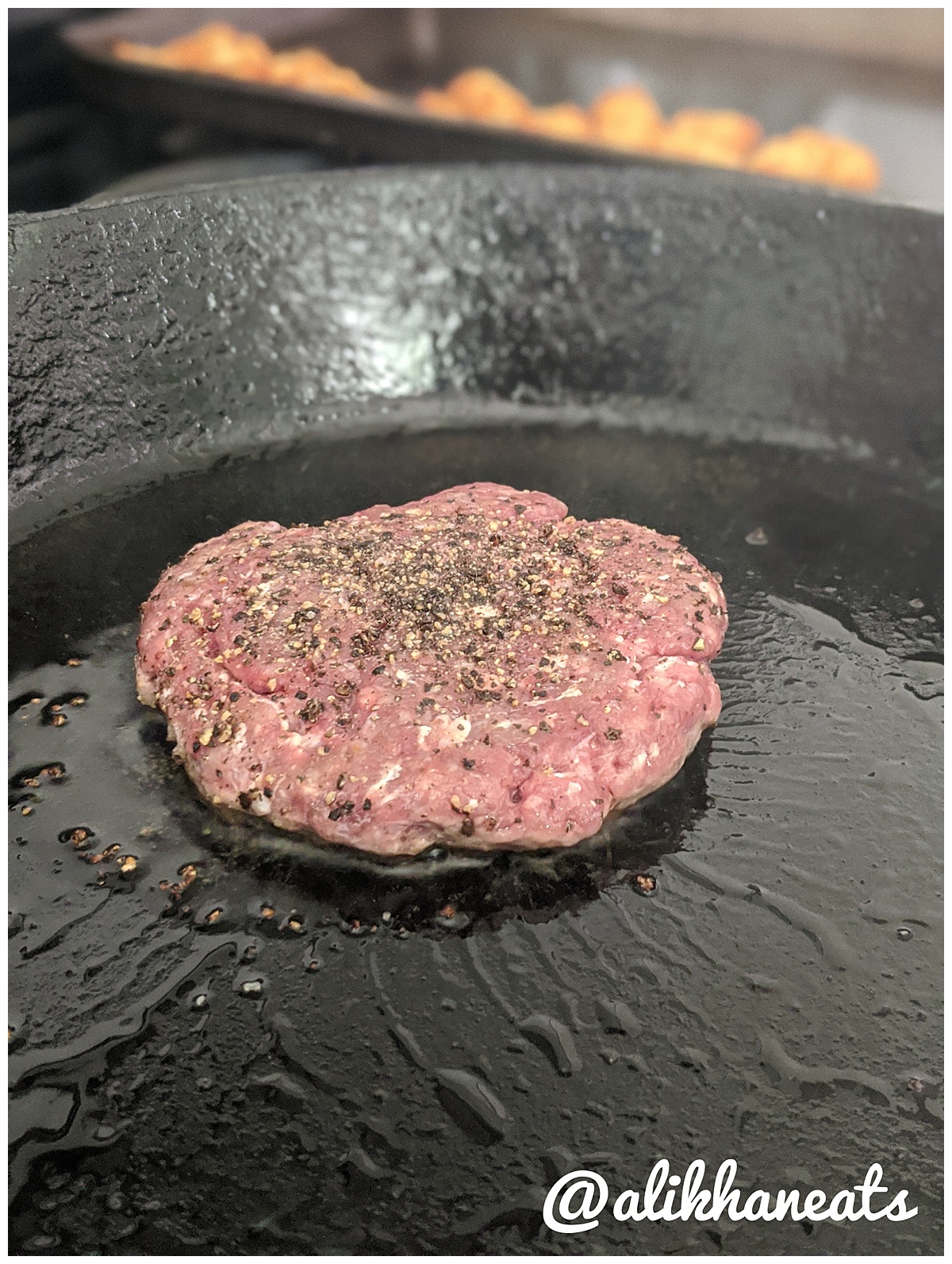 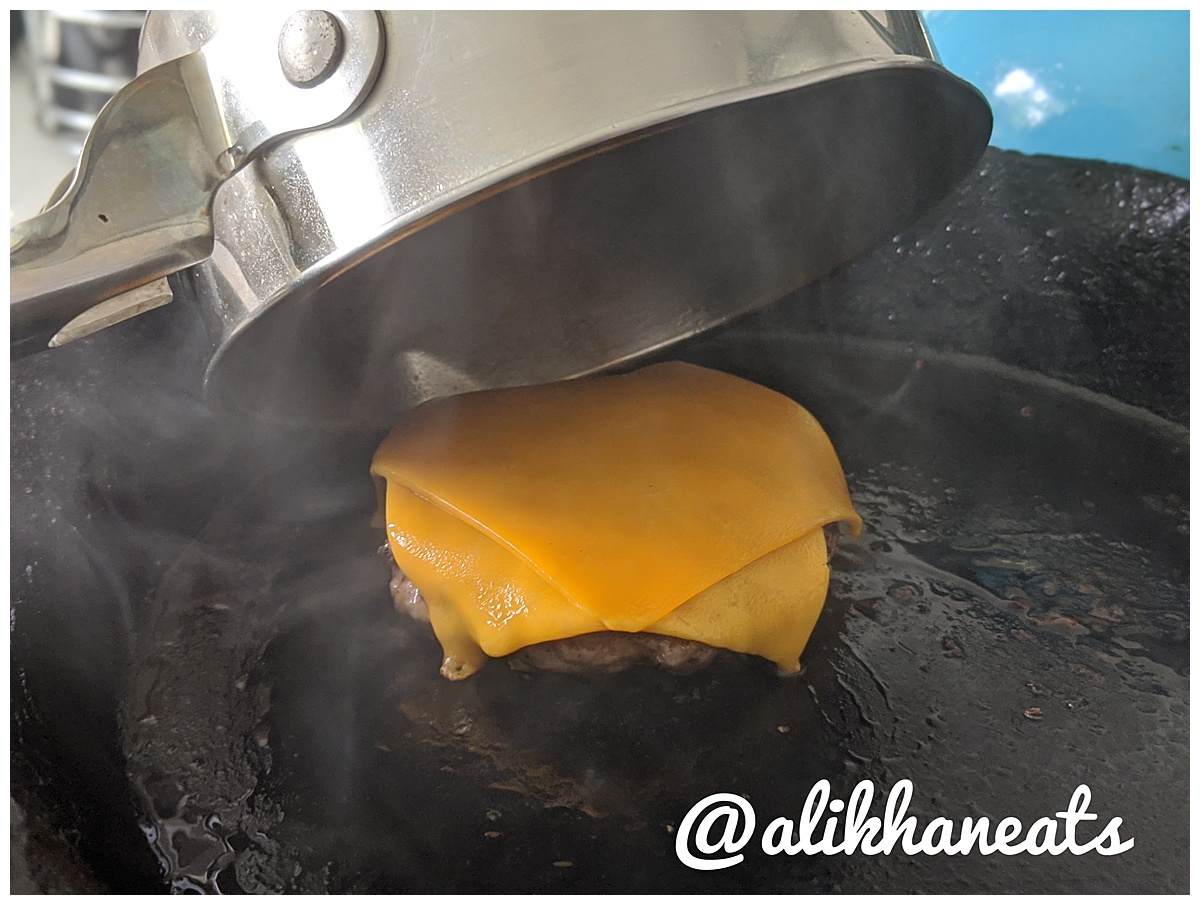 After a solid sear and a flip, I went for the dome effect and steam melted the cheese. Never tried this before and I have to say it is genius. And the best part is someone on my Facebook page told me to do it. 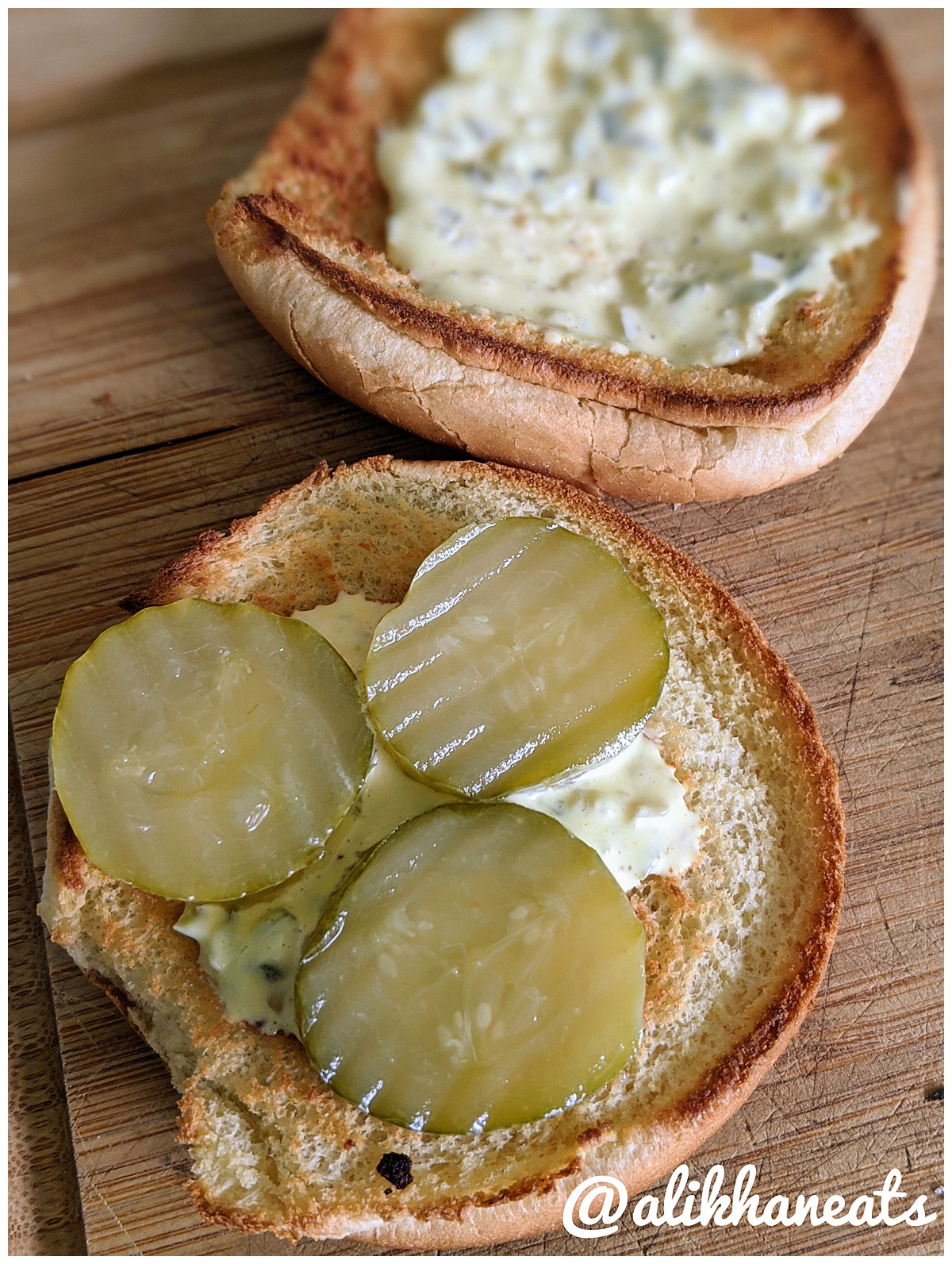 After a heavy saucing of the buns and a hit of pickle, it is time to put this comfort food beast together. 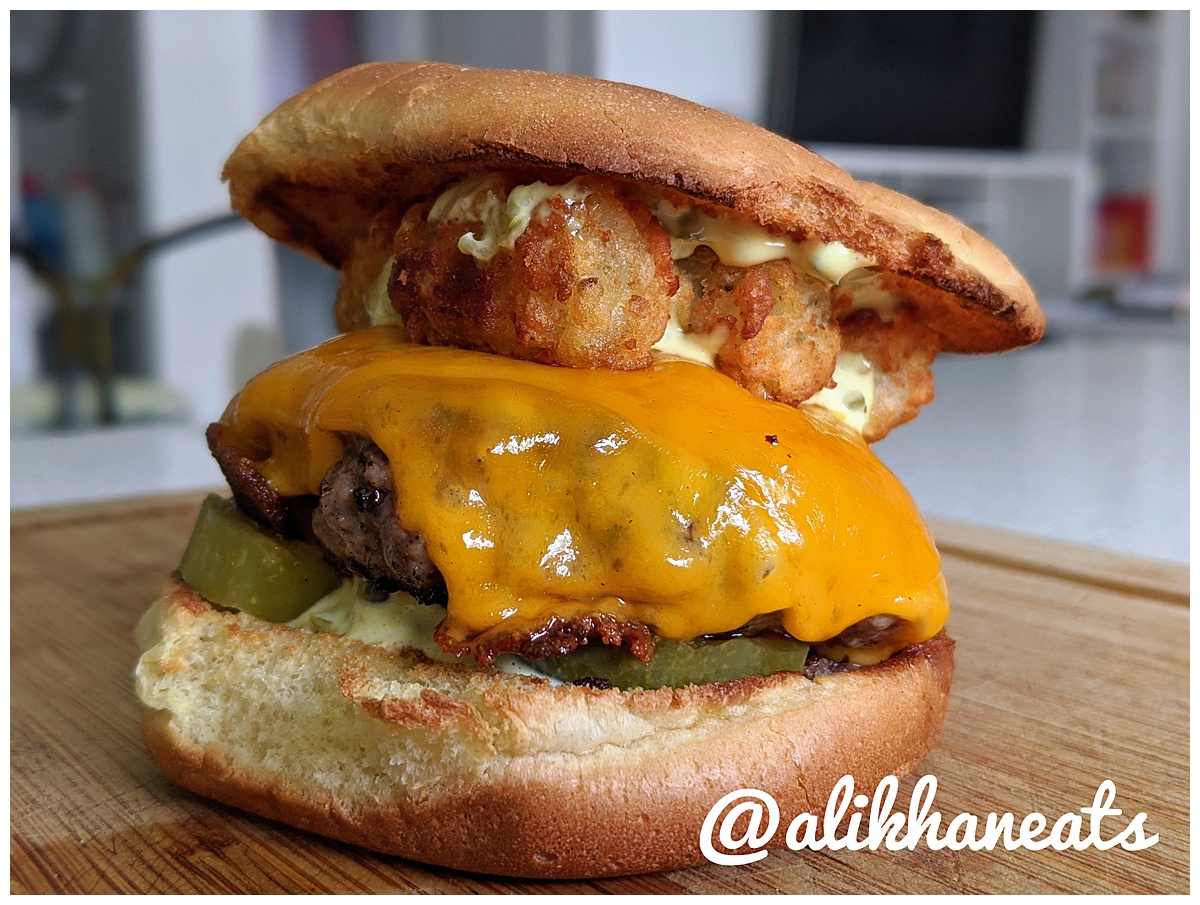 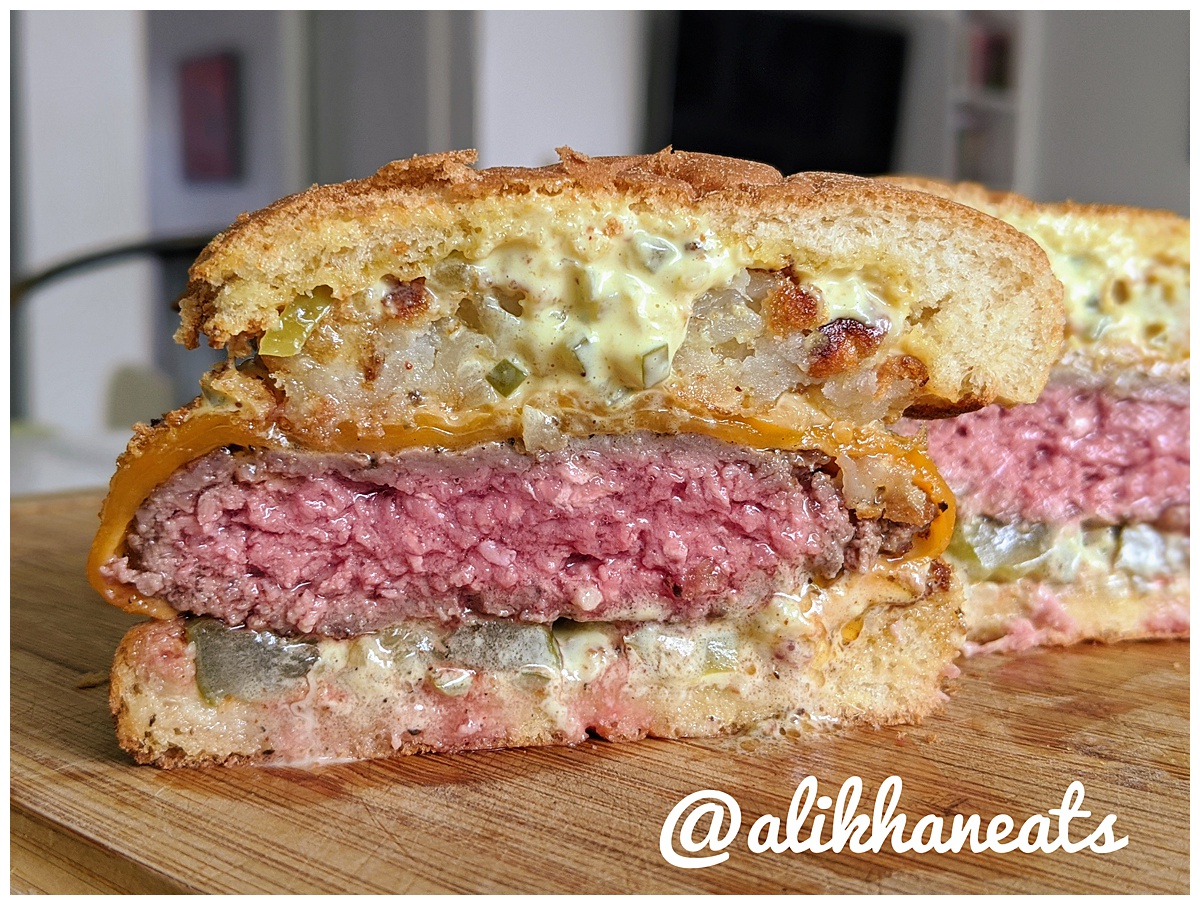 Like I said this was not a slider, but I was super thankful for that hardcore medium rare effect due to using a thick patty. The combo of comfort food/ processed food flavor meeting a grass fed beef patty cooked like steak was pretty awesome. But even more awesome was when I did a batch of proper Big Mac sliders. 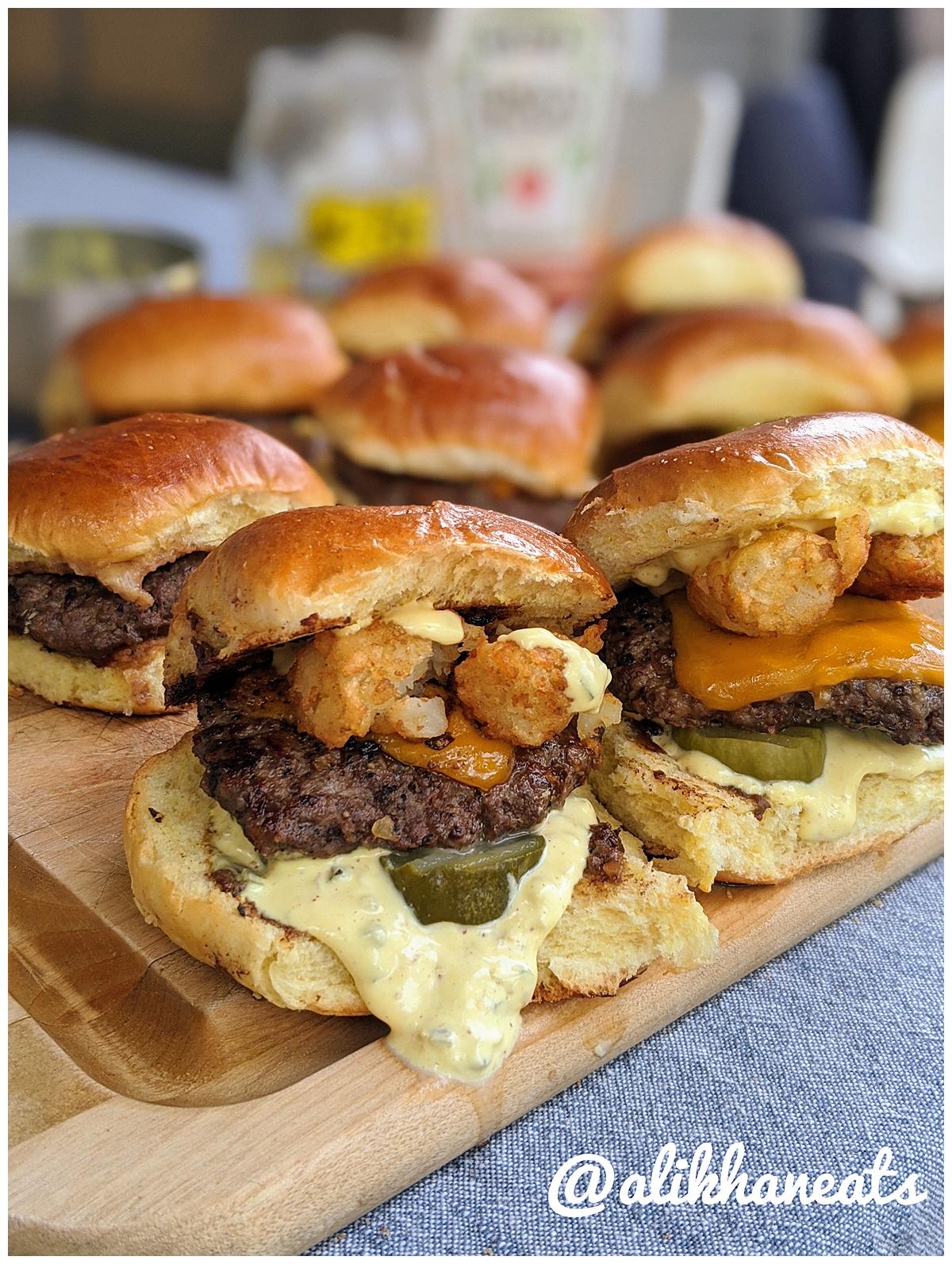 Cue that song from the Twix commercial in the 80s-90s. Big Mac Slider, now dubbed Tater Mac(Big Tot was a close second) has arrived.

Napkins not included. But should be. 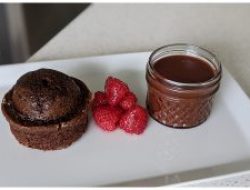 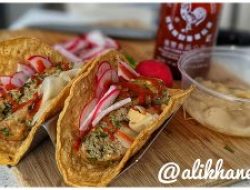 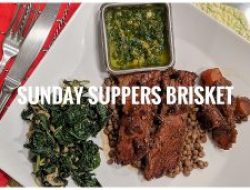 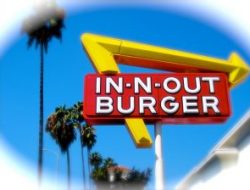 One response to “This Big Mac Slider has a name: Tater Mac”