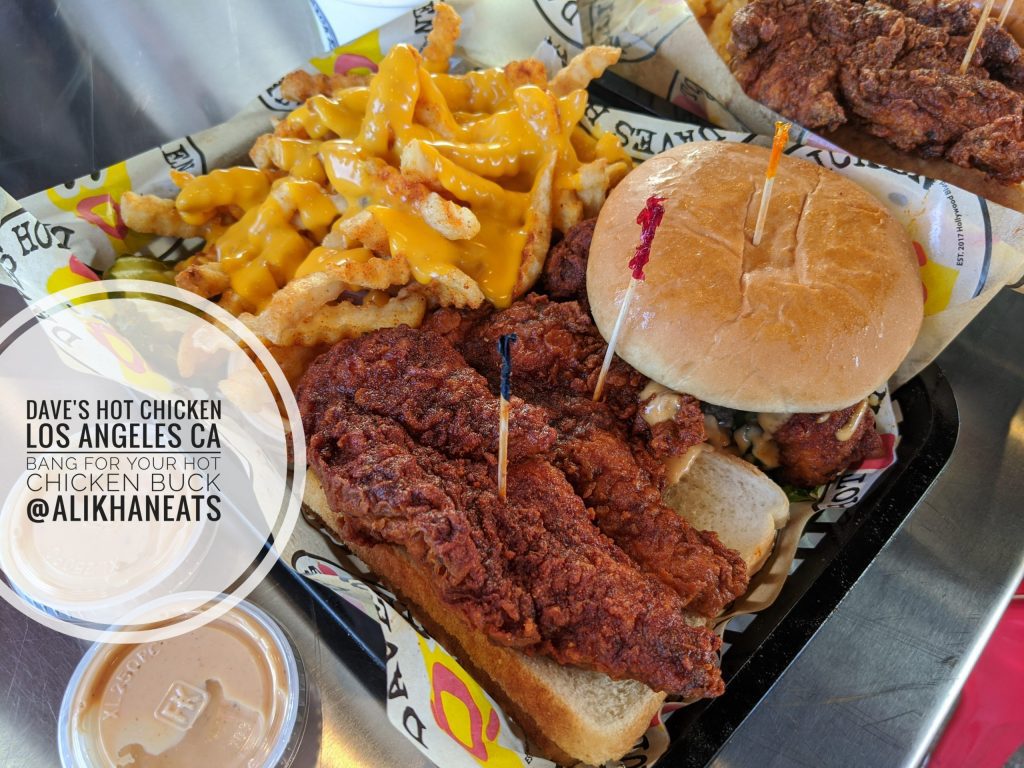 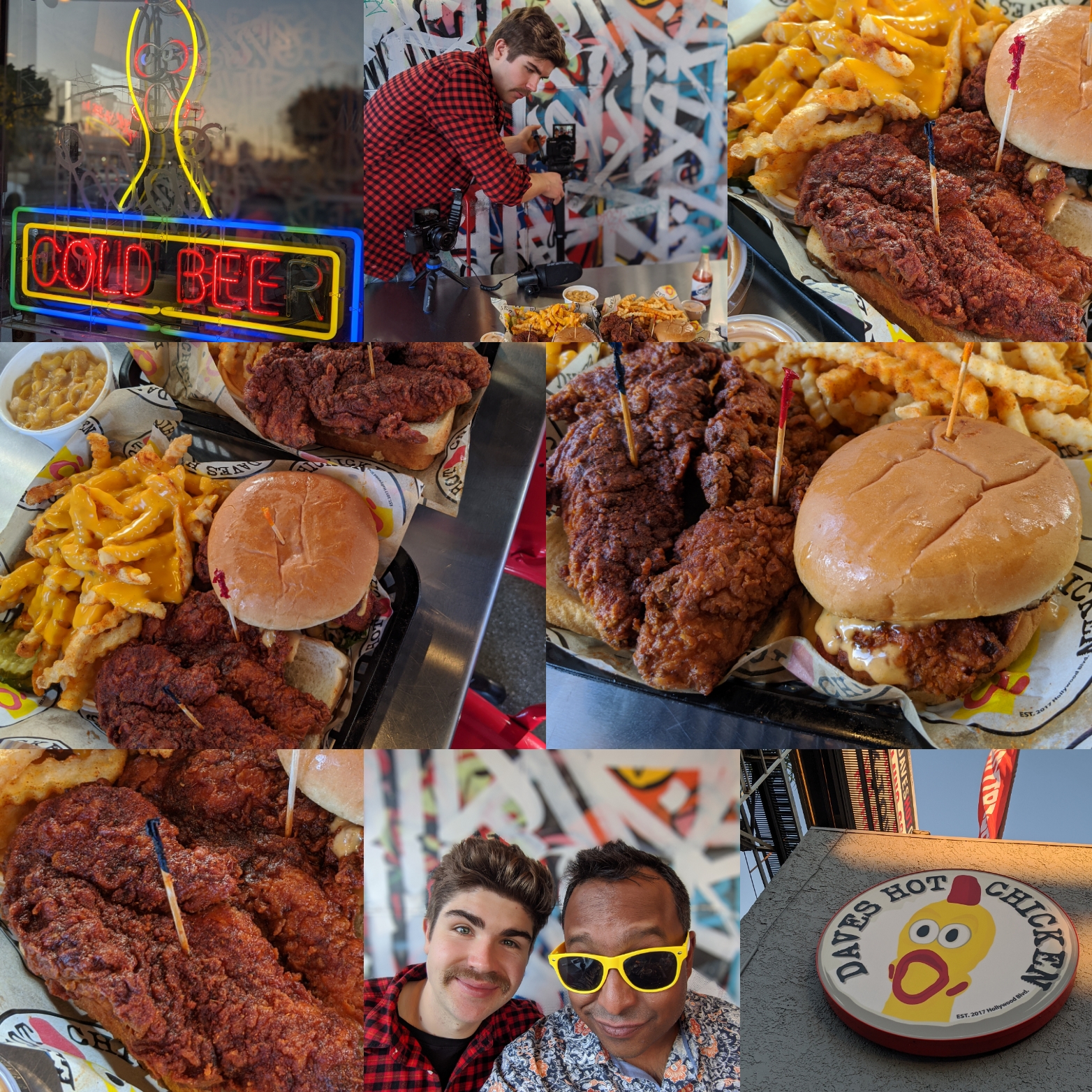 The Vitals:
the spot: Dave’s Hot Chicken 970 N. Western Ave Los Angeles CA + locations throughout the city
the eats: Chicken Tenders and Chicken Sliders + fries
the bucks: $11-$13 for a combo
the full nelson: A delicious gut buster on multiple levels

Nashville Hot Chicken ain’t just a Nashville thing anymore. Take it from a guy who has been to Nashville and done the deed, you can now find spicy as Hell fried chicken in Austin, Chicago, NYC and most certainly Los Angeles. The kind of spice level Nashville Hot Chicken is known for is a young man’s game. When I was 22, I’m sure I would have been up for signing that infamous waiver before eating the Reaper spice level Chicken Tenders or Chicken slider at Dave’s Hot Chicken. But you don’t need to go through all that torture to break a sweat at Dave’s Hot Chicken. In fact, that part comes pretty easy. 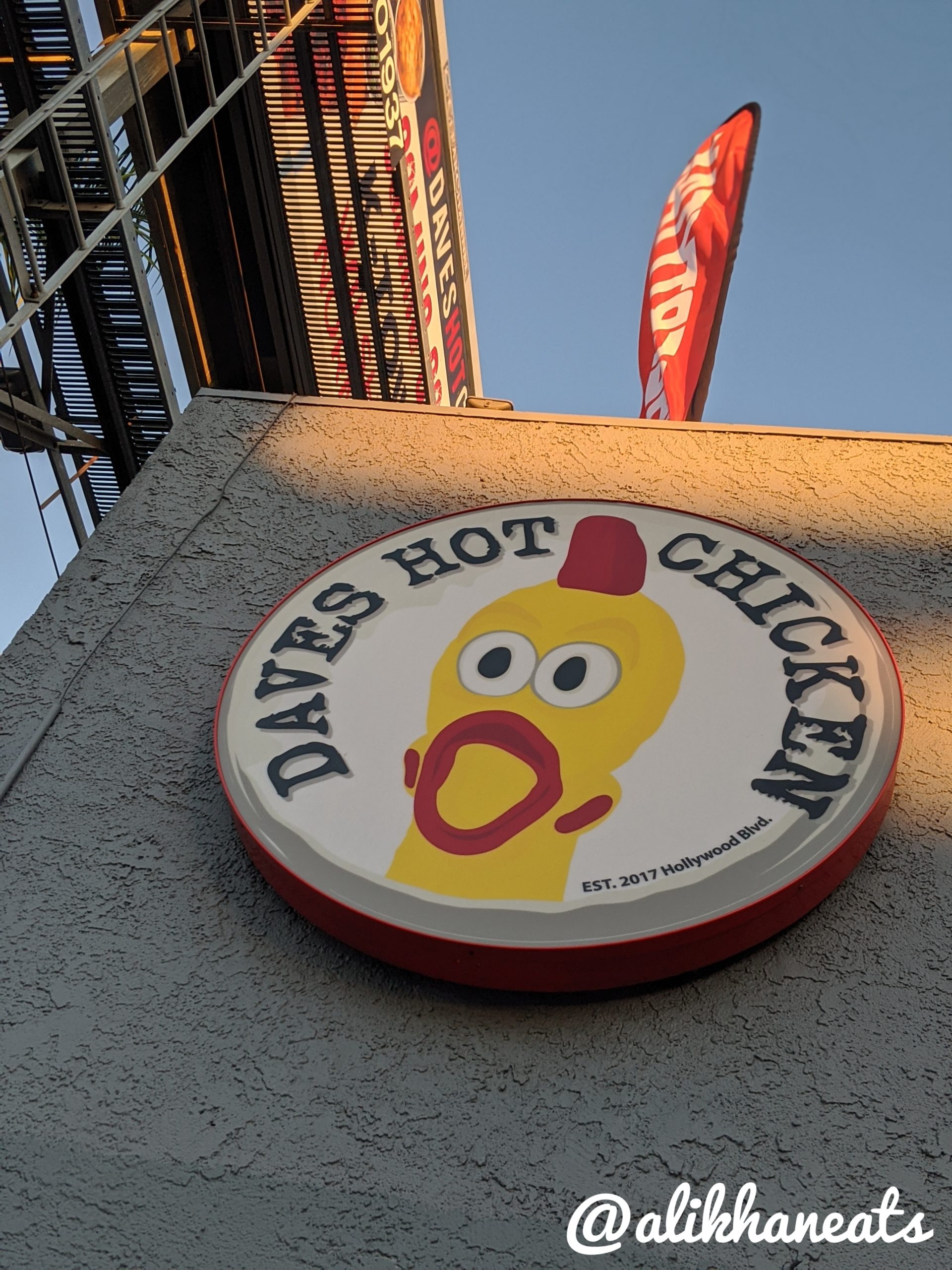 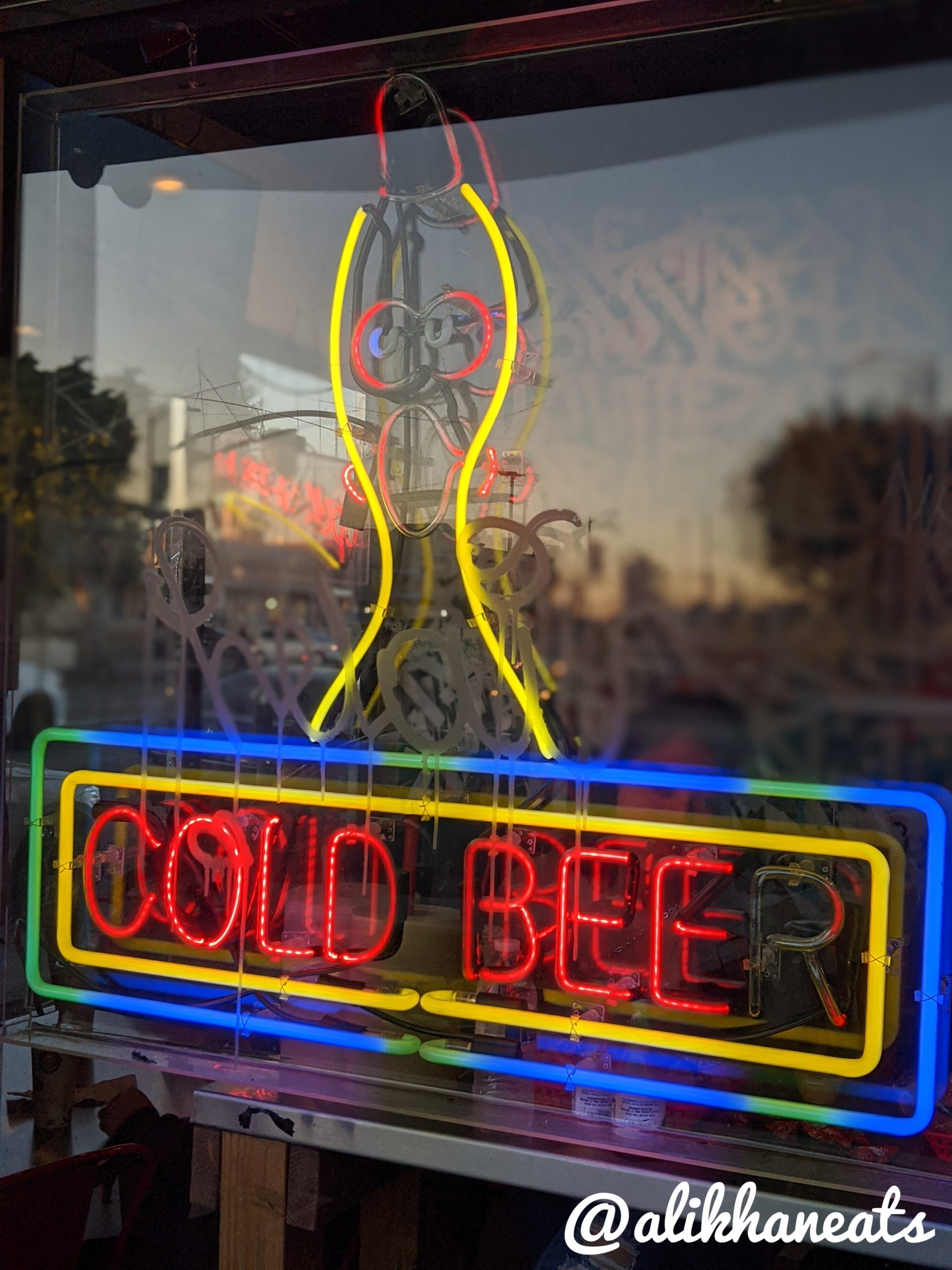 Cold beer is a great idea before and during your visit to Dave’s Hot Chicken. Probably after as well. There are a few players in the Los Angeles Hot Chicken game, perhaps most notably Howlin’ Rays, and they have the line to prove it. That’s not to say Dave’s Hot Chicken is exactly a quiet little secret. I strolled in at 4pm and the place was popping and keep in mind this is one of several locations in Los Angeles. 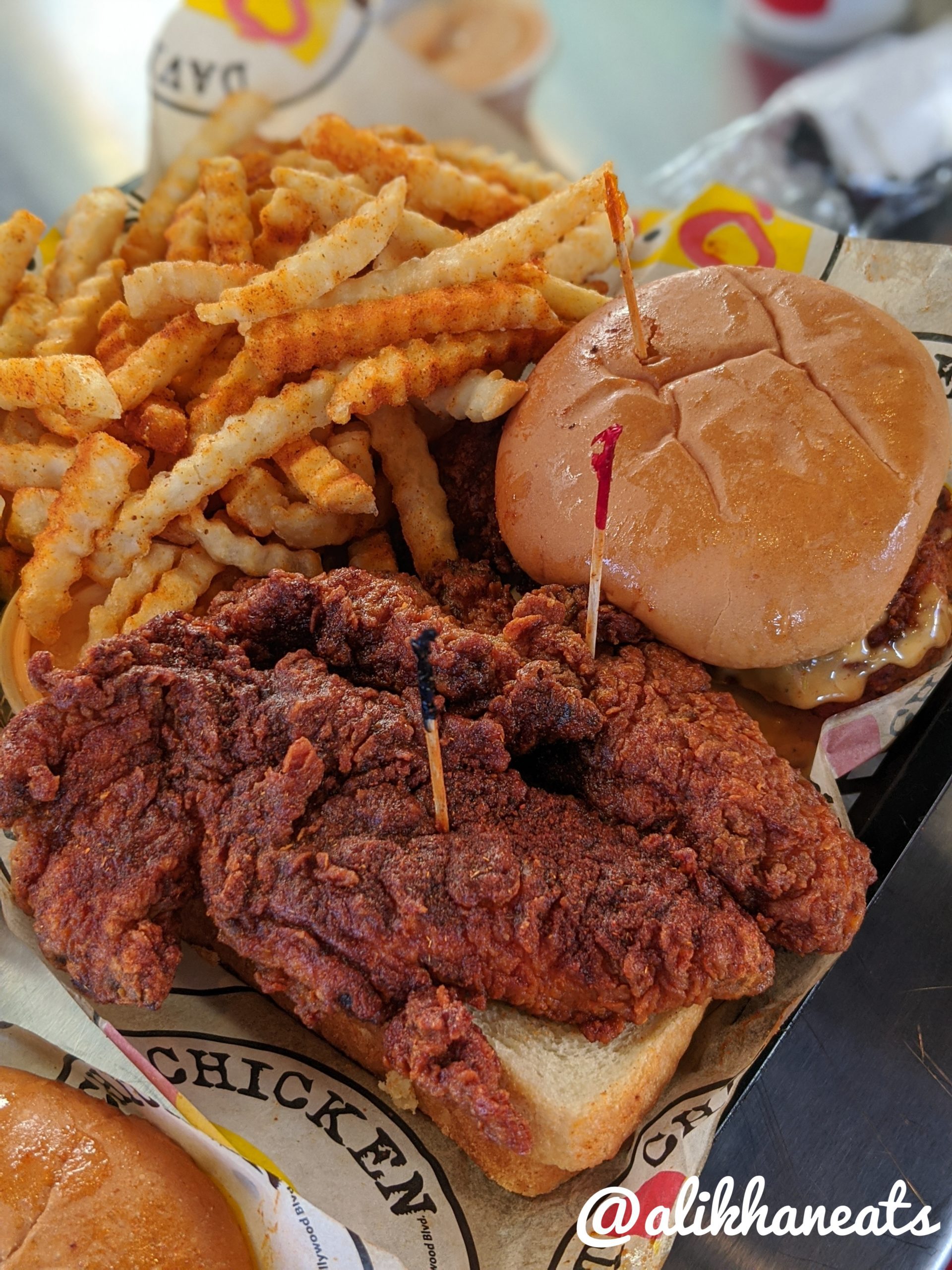 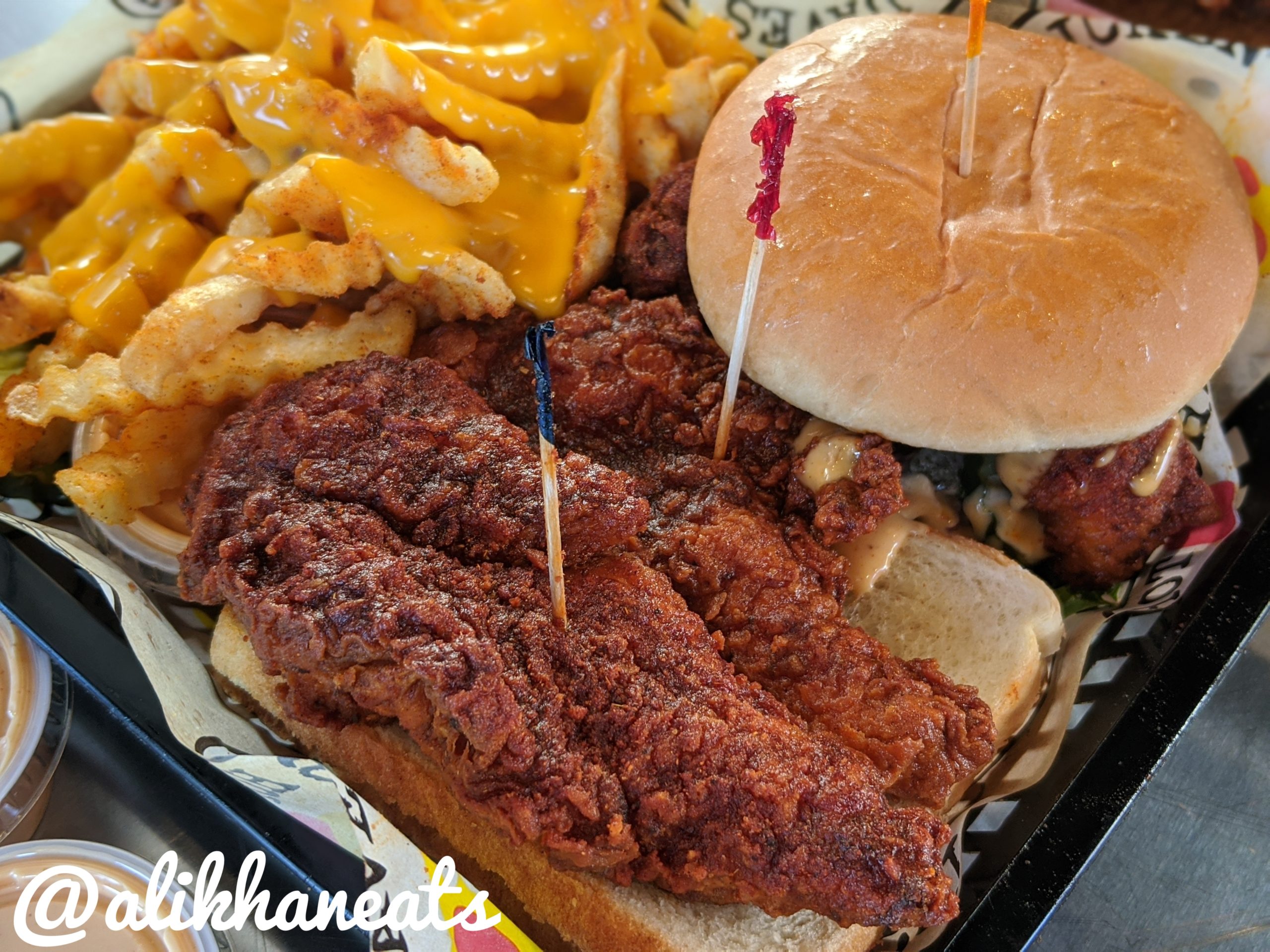 It seems strange to sum up Dave’s Hot Chicken with a side dish but the side dish says it all: crinkle cut cheese fries. Unabashedly nostalgic growing up food, if growing up includes feasting at the Shopping Mall food court while stoned, this dish sums up why you are here: a cornucopia of caloric cheat day eats. And those eats are executed well. This might seem slightly off the beaten path for yours truly but I came here because of my guide. 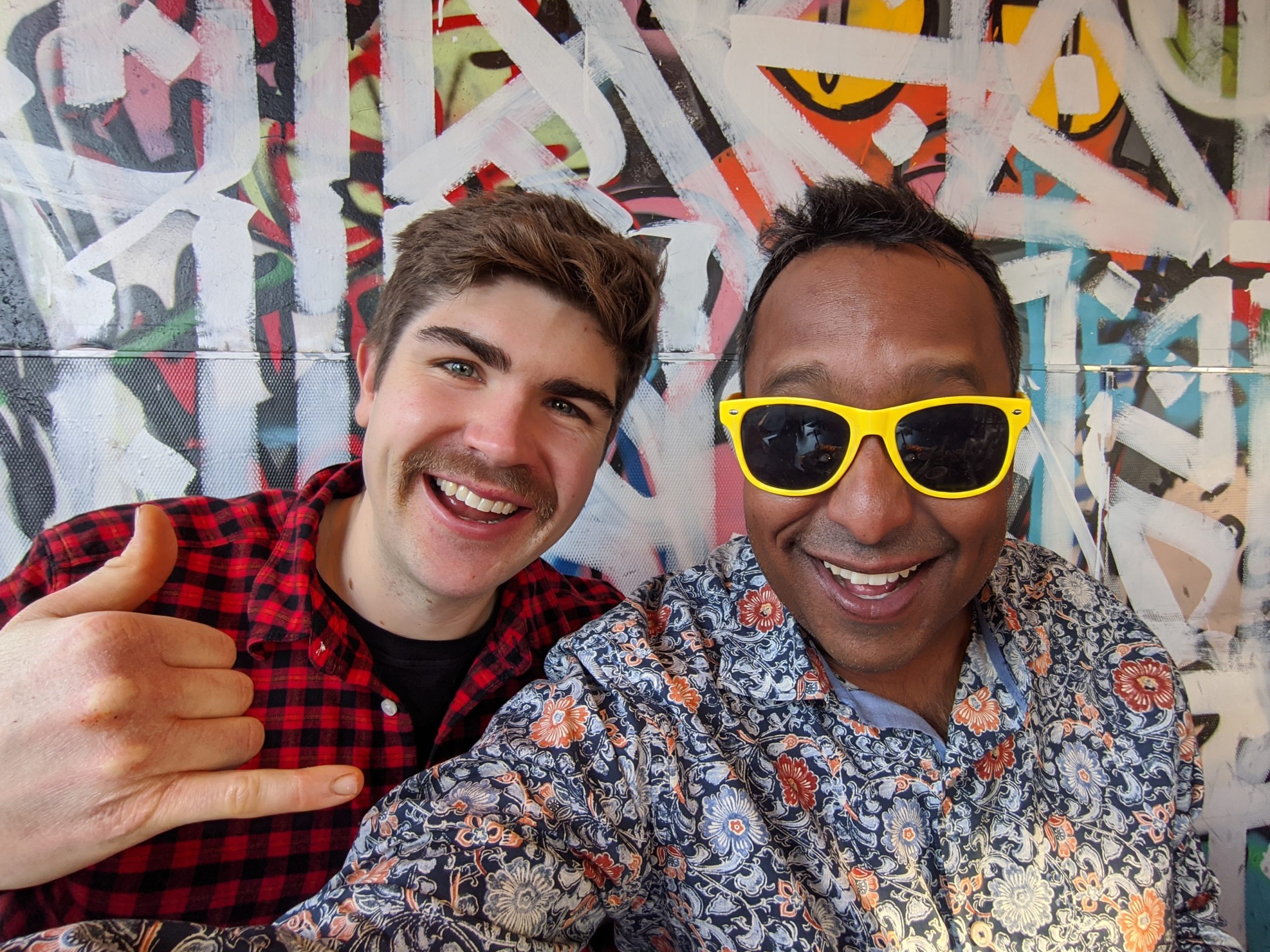 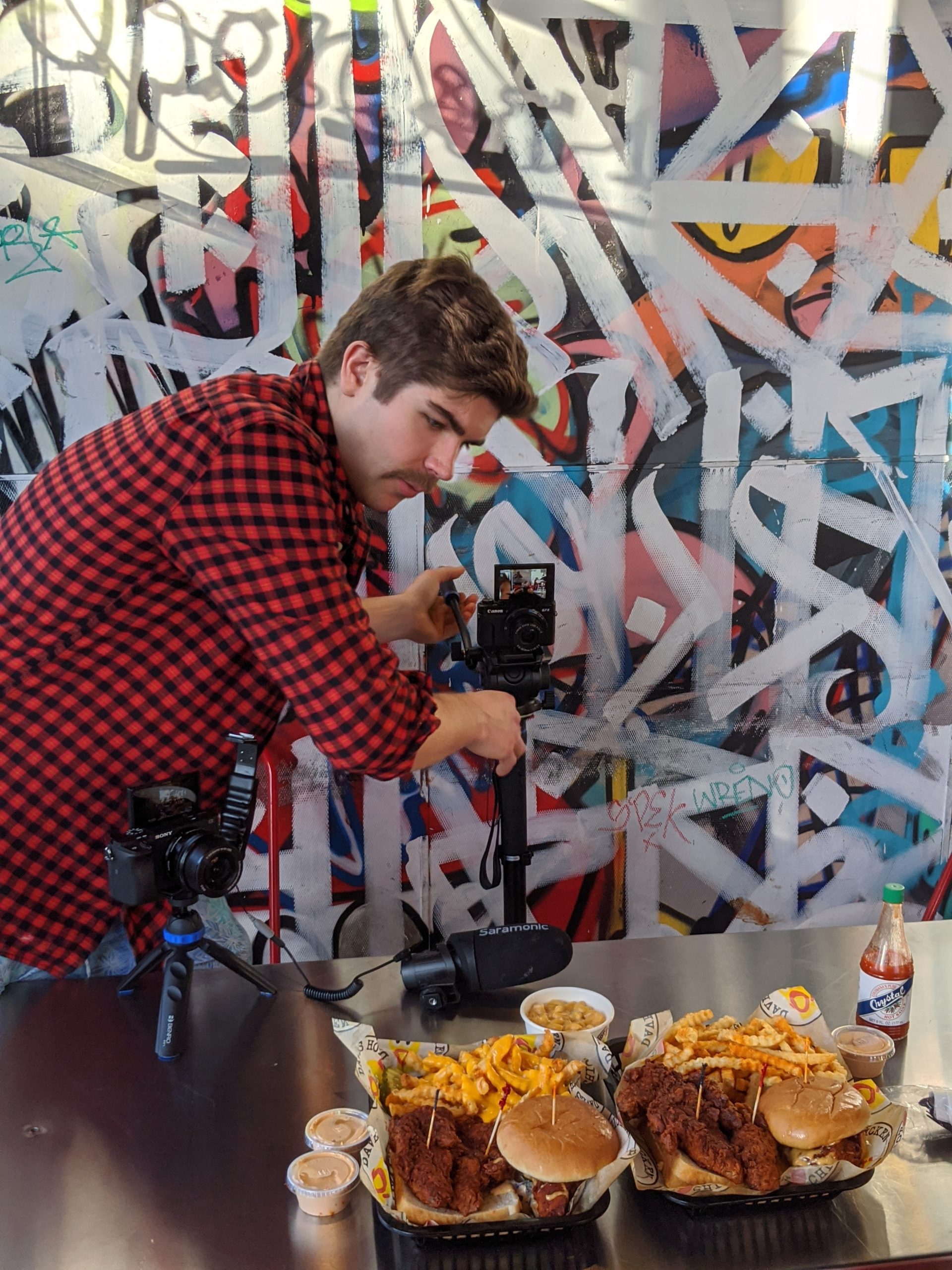 Meet Magic Mikey, YouTuber extraordinaire, Cheap Eats fan and just a great dude who reached out to me on IG about doing a collab. His namesake show features loads of cheat day eats all over Los Angeles and I highly recommend you check it out. Speaking of recommendations, let’s get into that all important issue of just how hot you could/should go at Dave’s Hot Chicken. 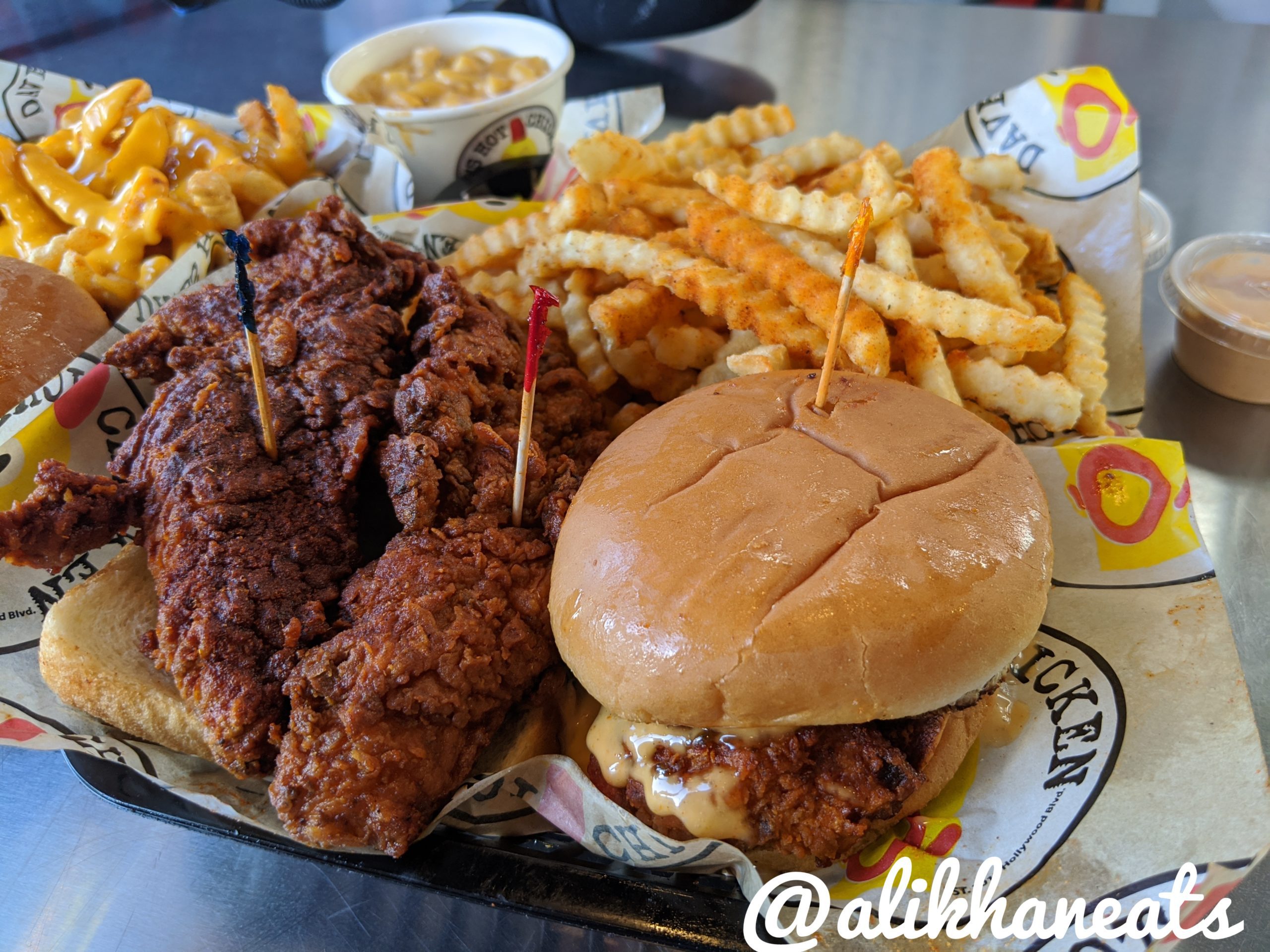 But first off, let’s talk order. We went for the Slider and Tender combo which will set you back a cool $12 bucks. Not exactly the cheapest of cheap eats but it comes with fries. In the pic above you will notice two tenders. Magic Mikey felt compelled to add a second for an extra $3.50. This is wholly unnecessary as the tenders are freakin’ huge. And that chicken slider? It is really just a full on chicken sandwich. The plate above could easily be shared by two people, but hey, when it’s your first time and you roll with a Cheat Day obsessed YouTuber like Magic Mikey, you roll DEEP. 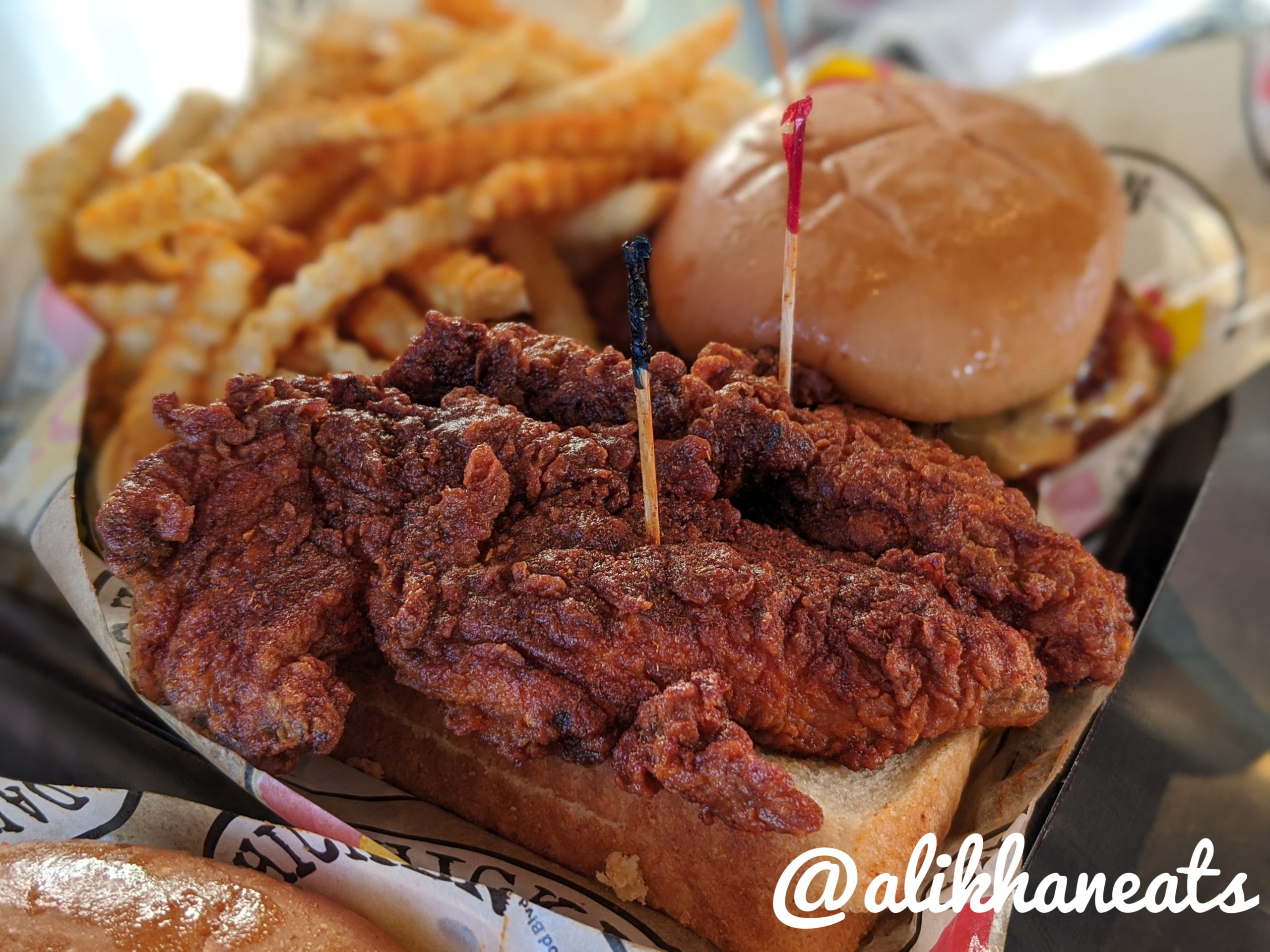 We toyed with two spice levels here: Hot and Extra Hot. As far as the tender is concerned, going hot is the way to go. Keep in mind there is no food barrier like a slider bun between your lips and that spicy inferno that passes for breading on the chicken tender. So hot goes a long way. And so does this chicken tender which could pass for an airline chicken breast at some restaurants. As far as extra hot goes, I couldn’t hang . . . I threw in the towel, or in this case the paper napkin. I can only imagine what the Reaper would do to me, my colon and Dave’s bathroom. 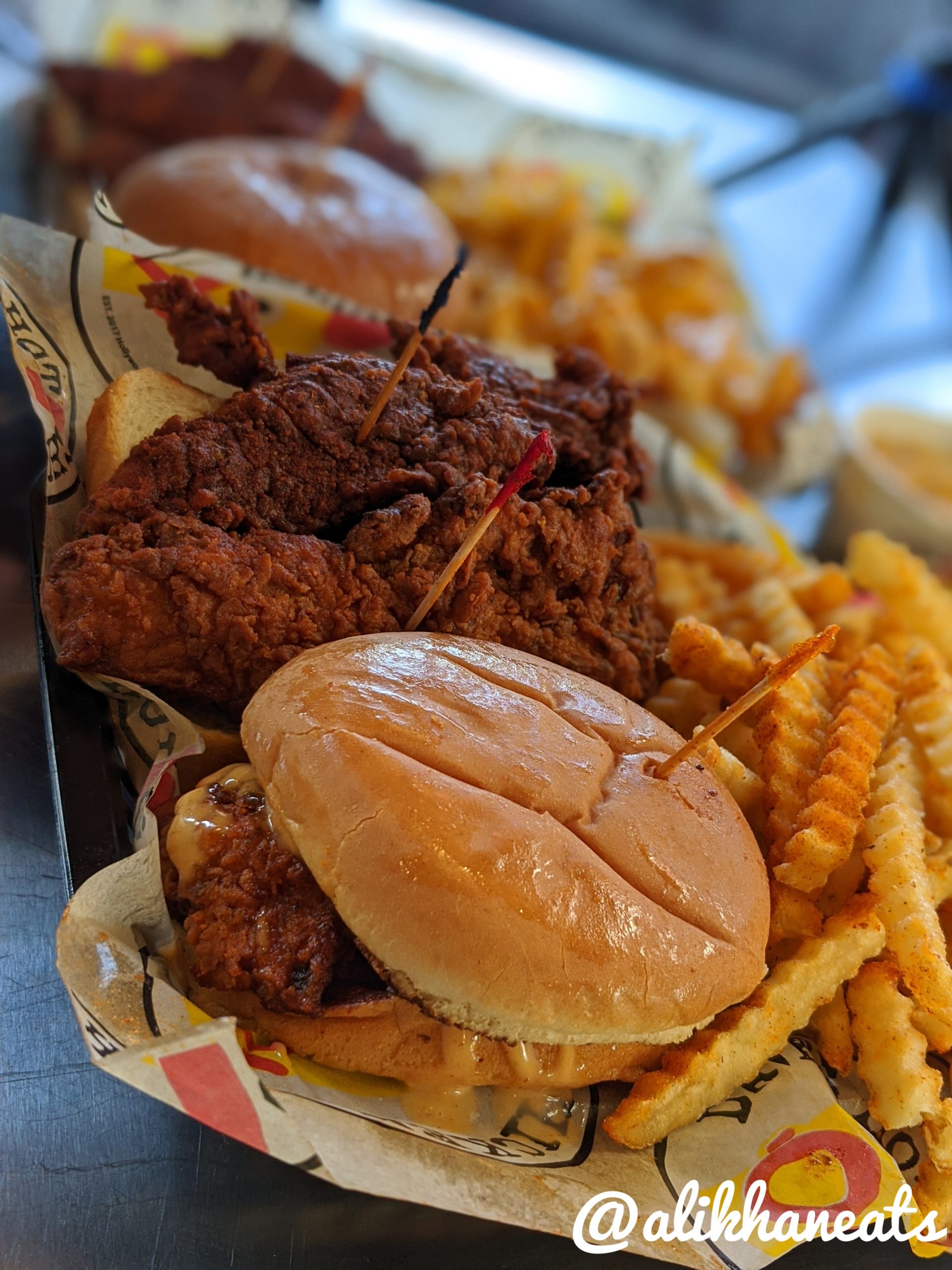 The slider, which again is more like a full on sandwich, incorporates a great kale slaw and with the bun in play, allows you to kick the heat level up to extra hot if you are so adventurous. Like I said, my days of torture inducing spice levels are long in the rearview but if you had to try the Reaper . . . do it in slider form. And it’s a heck of a sandwich. 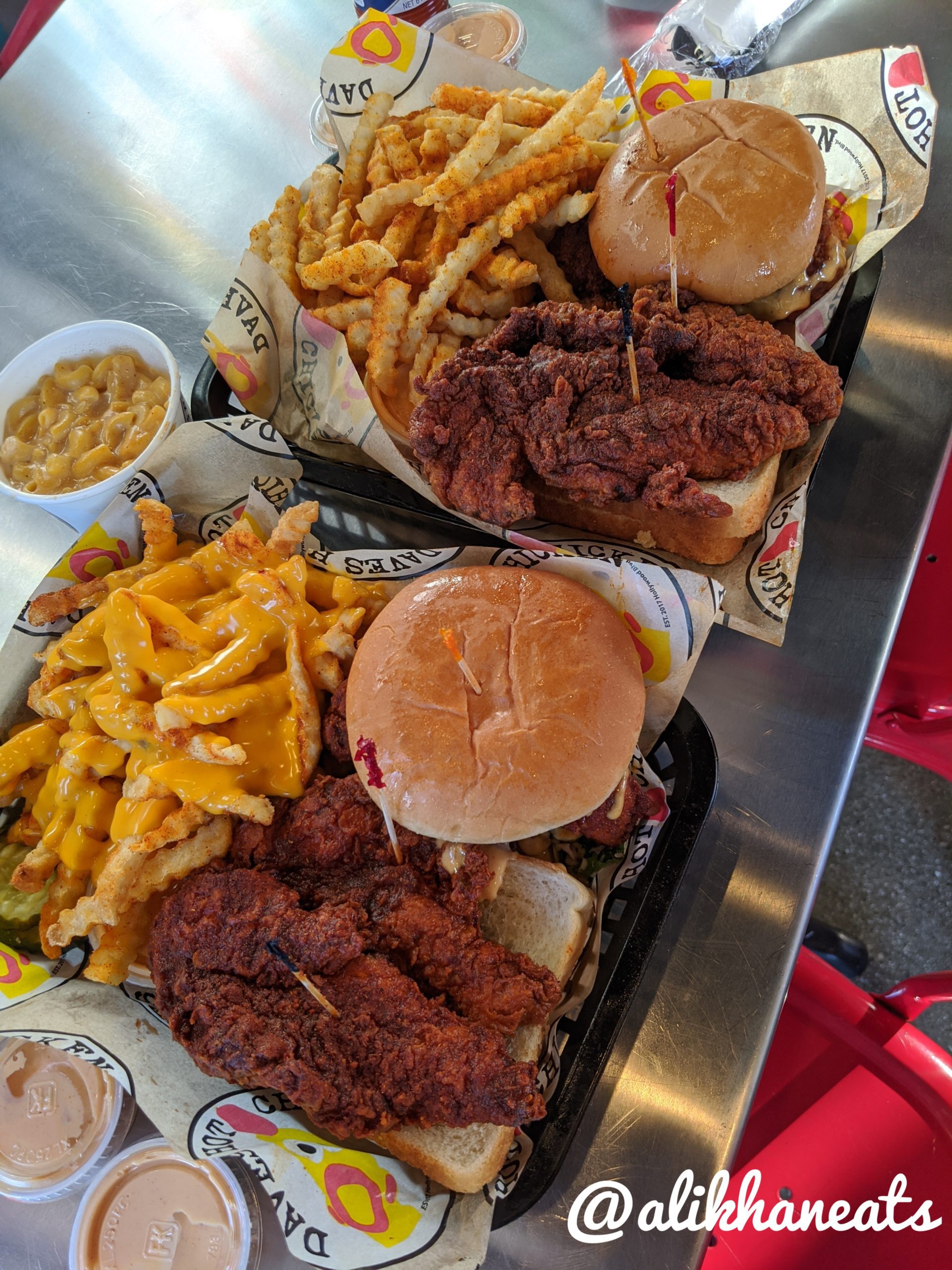 The cheese fries really make the experience on the ‘gram but honestly you don’t need the cheese sauce. Dave’s fry seasoning rules. And so does Dave’s dipping sauce. But if you must for the ‘gram, maybe pull a move and get both.

For foods that seems straight out of a 90s food court or an episode of Carnival Eats, there is some very respectable execution happening in what appears to the kitchen of America’s next great chain. Dave’s Hot Chicken may not wow you with foods you have not seen before, but Dave’s Hot Chicken is a place that people, including myself, will be going to for a long long time. This chicken spot is going places. 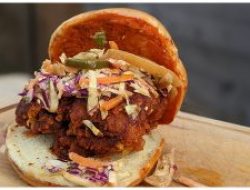 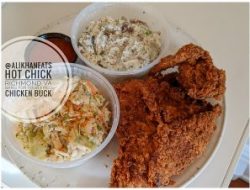 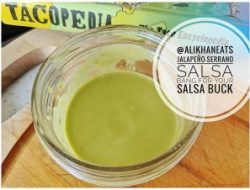