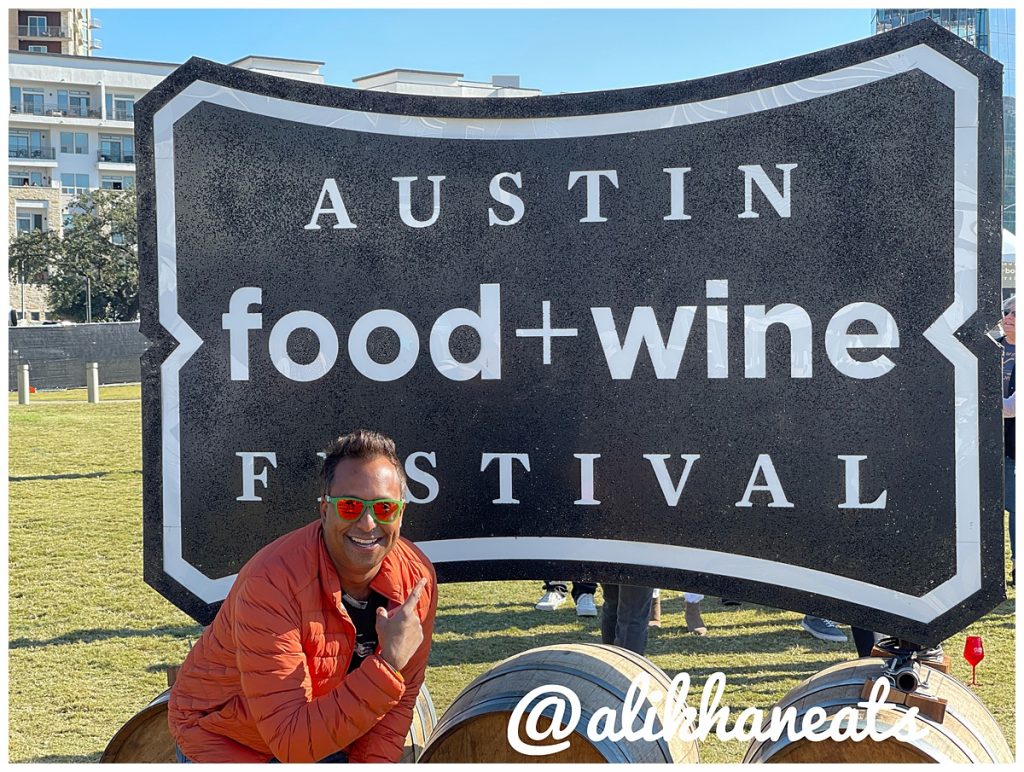 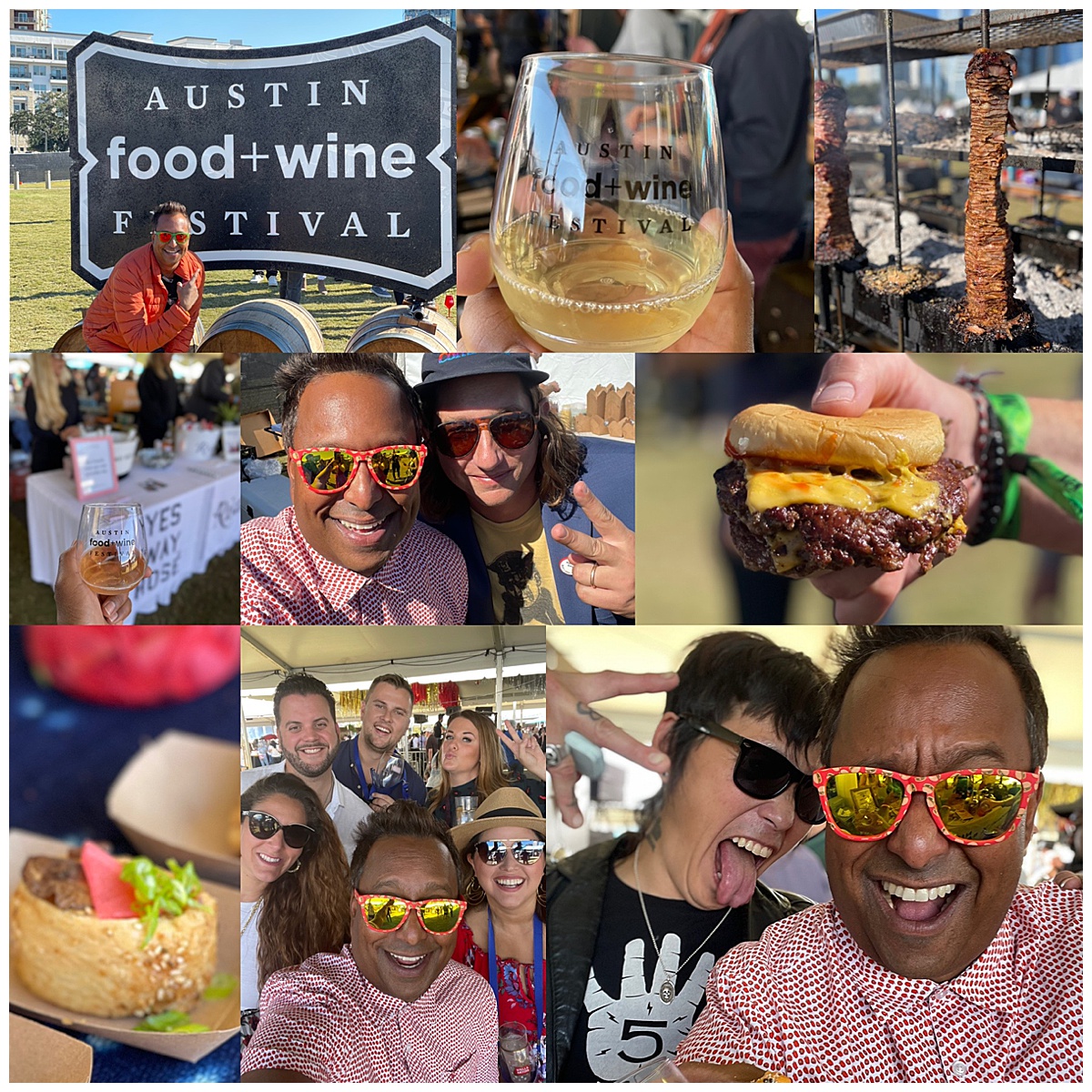 Ever since I moved to Austin I have been wanting to attend the Austin Food and Wine Festival. 2021 turned out to the year for me and I’m hooked. First off, the weather has cooled down which makes Austin ideal for anything outdoors. Second, your ticket gets you all the food and drink you want, provided you are willing to wait in line. And there are lines. So be a pro and make sure to get there early when the fest returns next year. 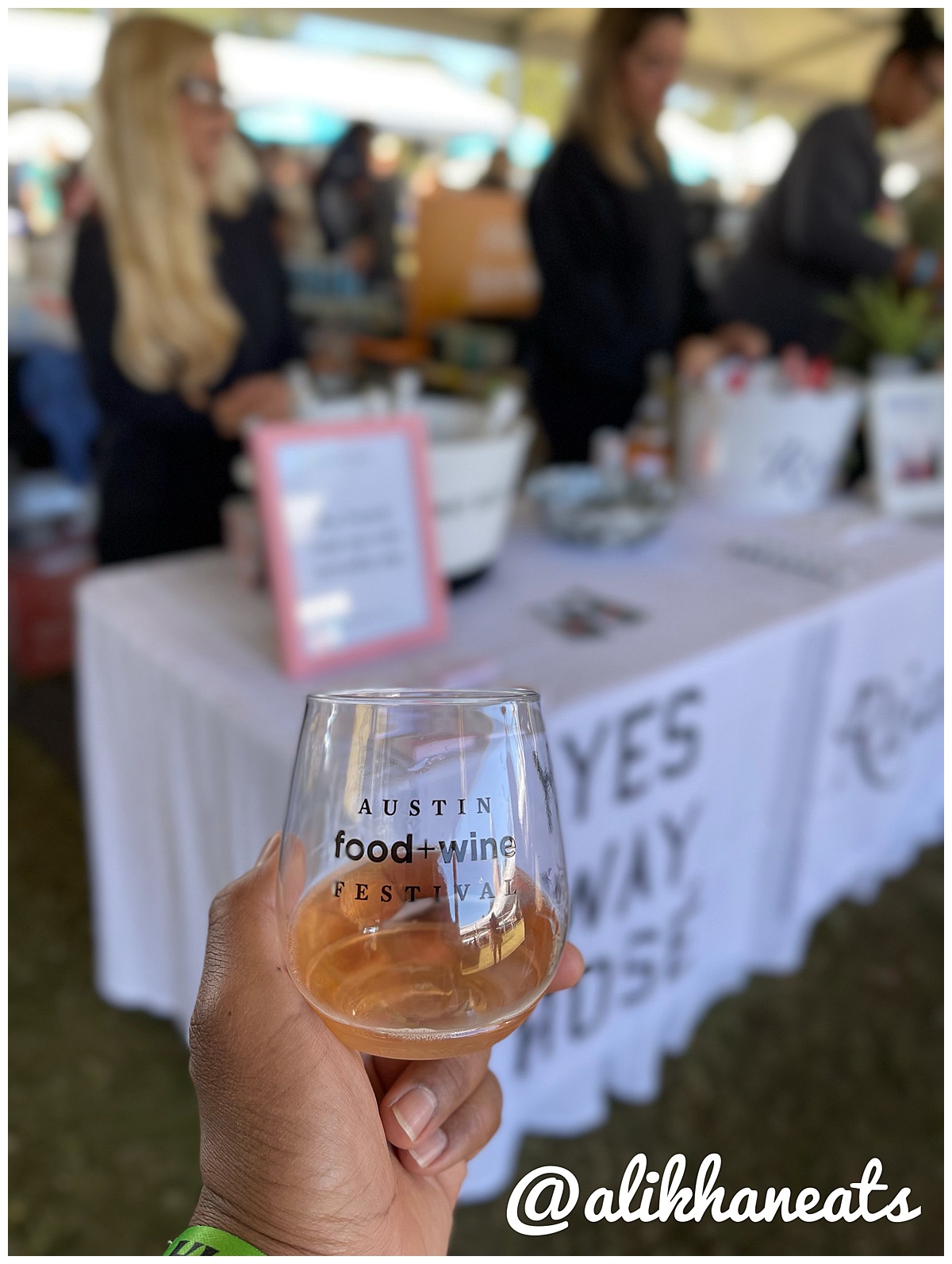 Even though the weather has cooled off in Austin, it is still plenty warm enough to get your white wine and rose drinking on. The selection of wine at Austin Food and Wine Festival included a number of sparkling wines, a few from Champagne and plenty of sparkling rosé, which is a fav of mine. This was the drink I started off with and it pairs well with so many foods too. 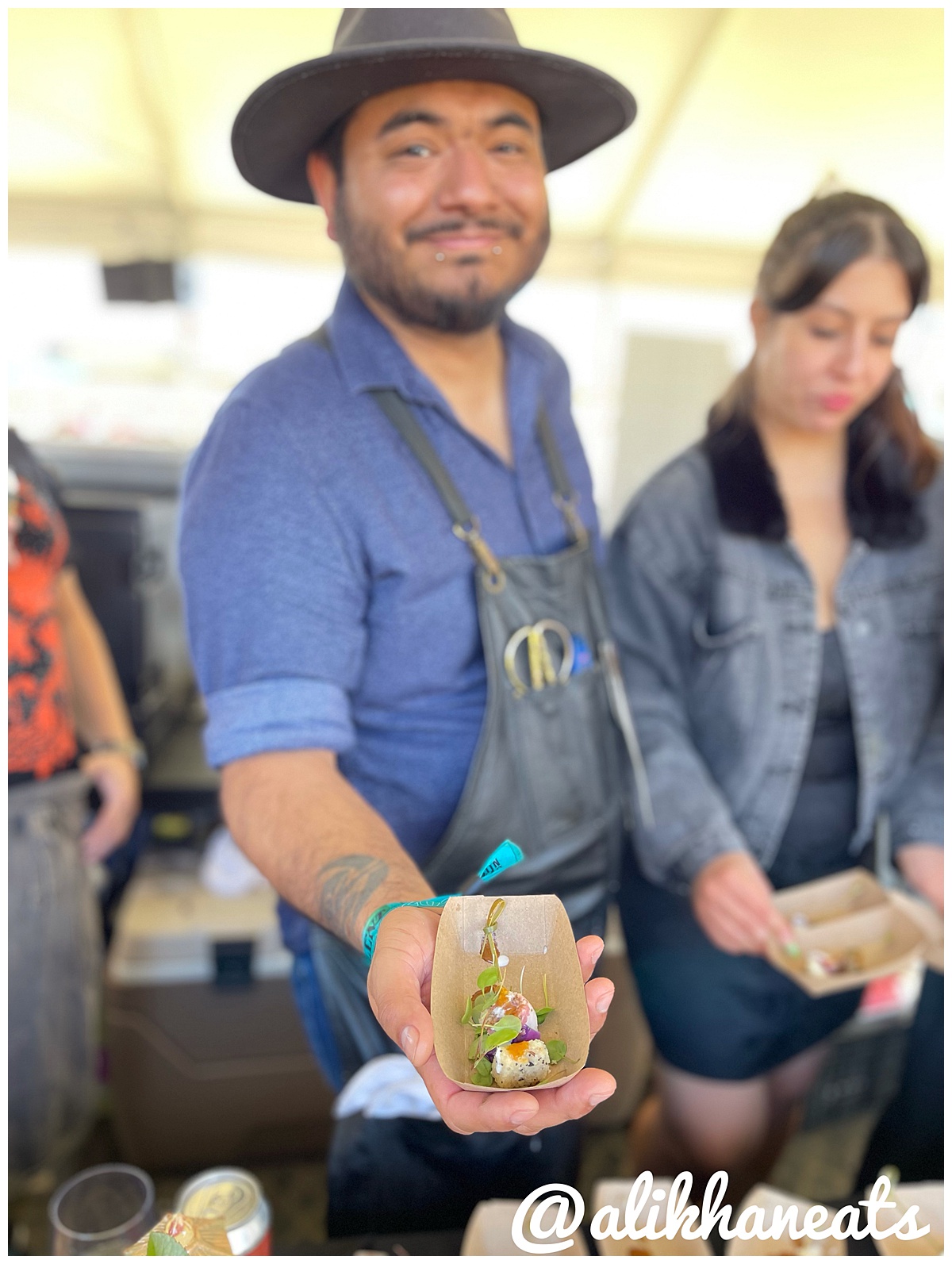 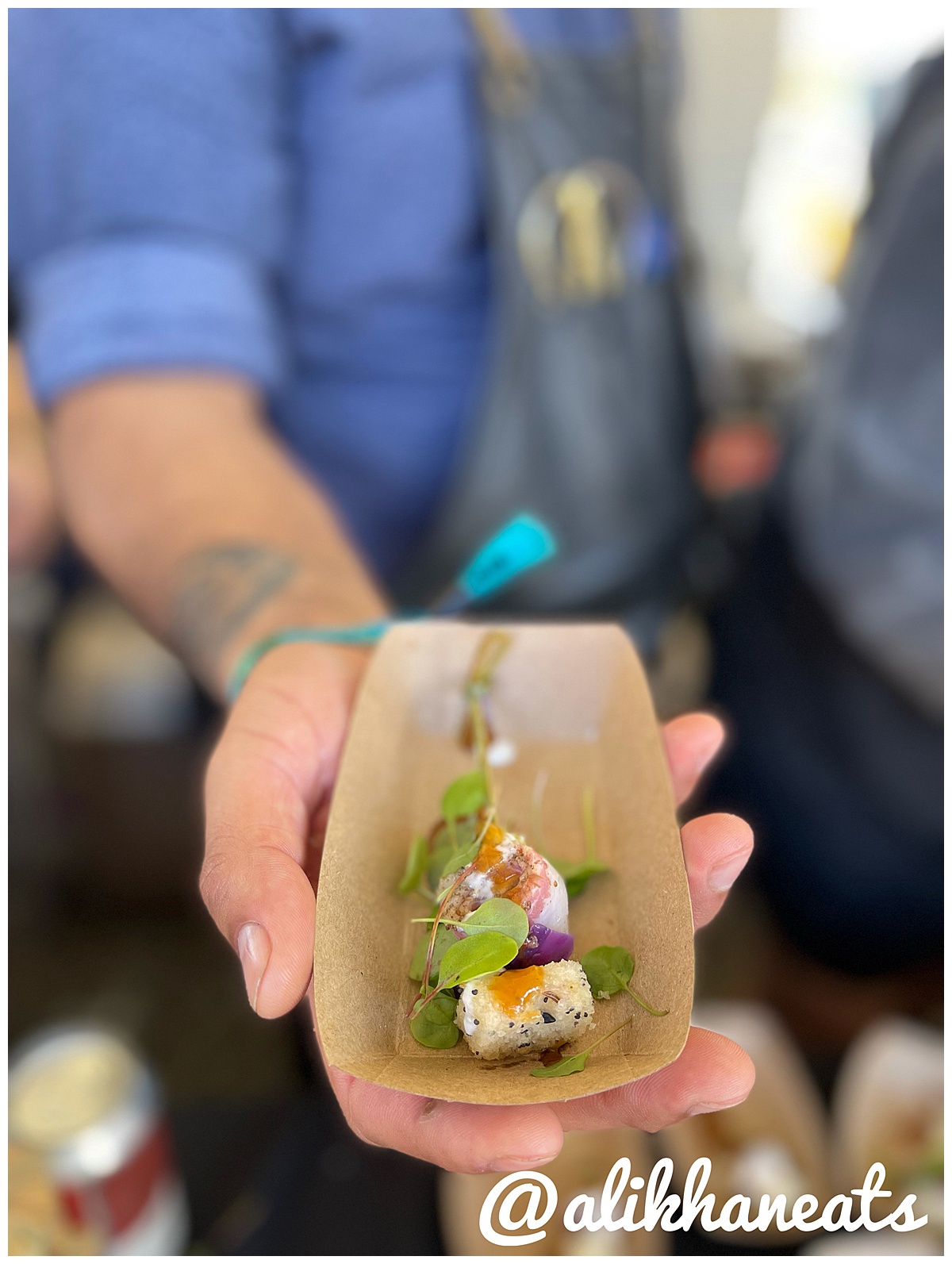 Most of my dining excursions include the whole family but every now and then, my wife and I do pull the trigger on a date night. I’m careful about what we choose because out the gate we are out at least $100 on the sitter. And I think I found me my date night restaurant: Honey Moon.

I was literally forced to eat here thanks to my good friend Gavin Booth of Couple in the Kitchen. Gavin, with his fiancé Karen Reinsberg are a food and travel influencer duo. When they aren’t jetting off to Greece to eat calamari and drink wine, you might find them at Honey Moon. This restaurant had been on my radar but I just didn’t know how good the food was.

Chef Manuel, who is pictured above, does a Pork Jowl Pastrami. The festival version peaked my interest for the full sized version at Honey Moon. As intense as pastrami pork sounds, the horseradish cream was light as a cloud. This skewer held the promise of an evening of balanced flavors and single handedly lit a fire for me to get some fine dining on. 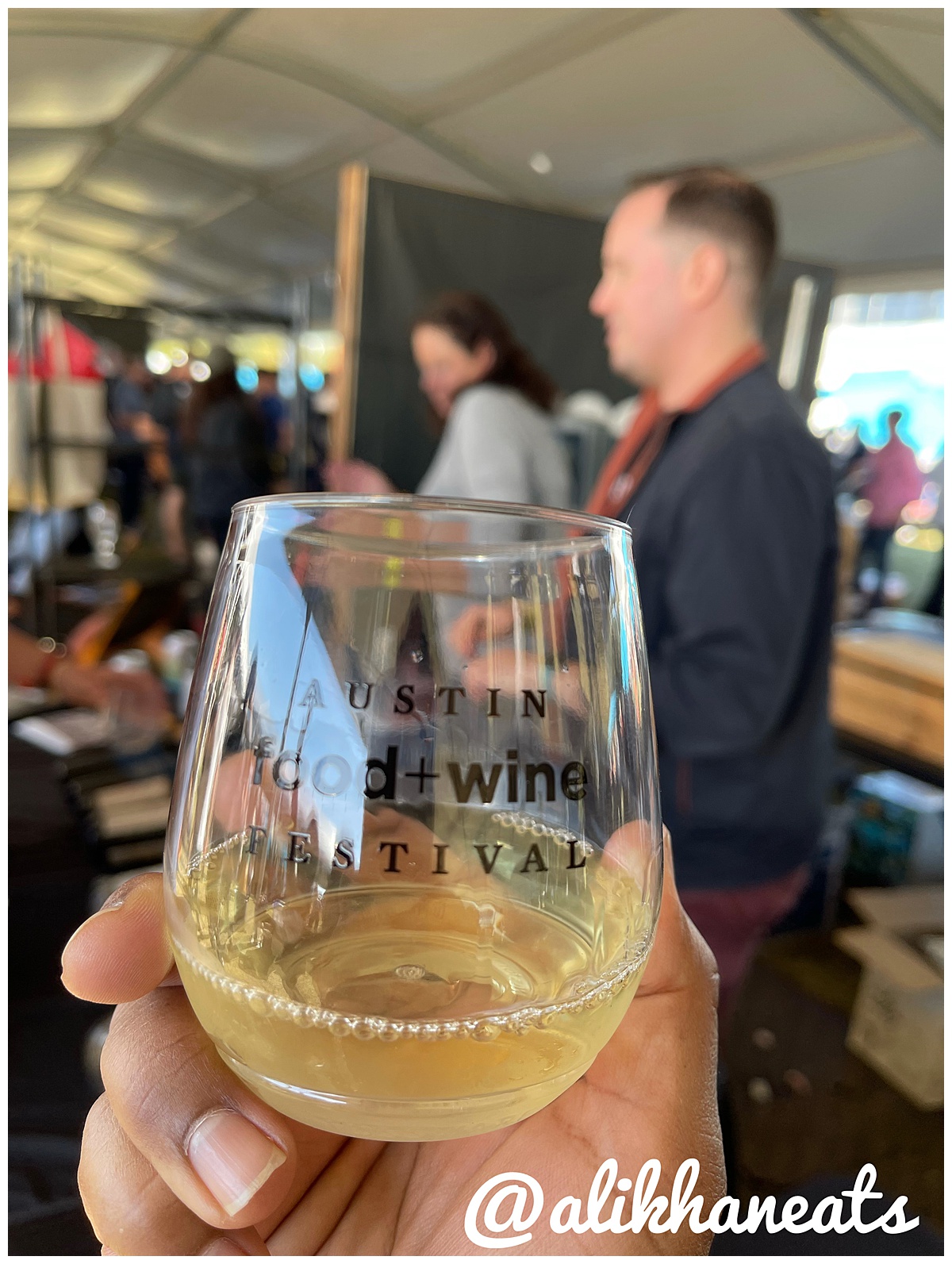 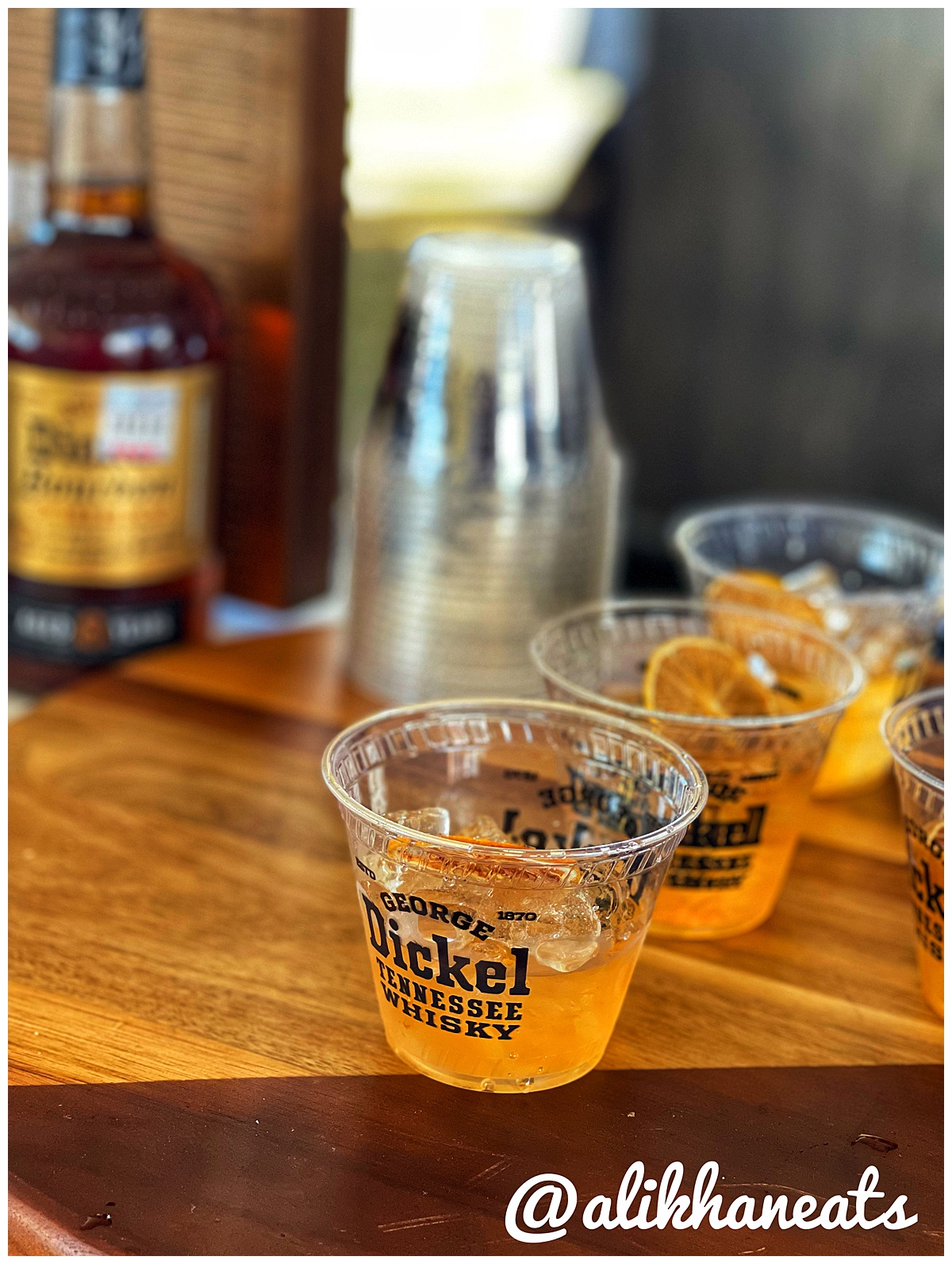 Not just wine. Booze too.

Yeah they got the hard stuff at Austin Food and Wine Festival too. George Dickel, along with Suntory, Nine Banded, Bulleit are just a few of the whiskeys being poured. Most came in cocktail form as well like this salted caramel Old Fashioned from George Dickel. I also had a highball from Suntory made with seltzer. Nine Banded was pouring them straight. Needless to say that wet my appetite. 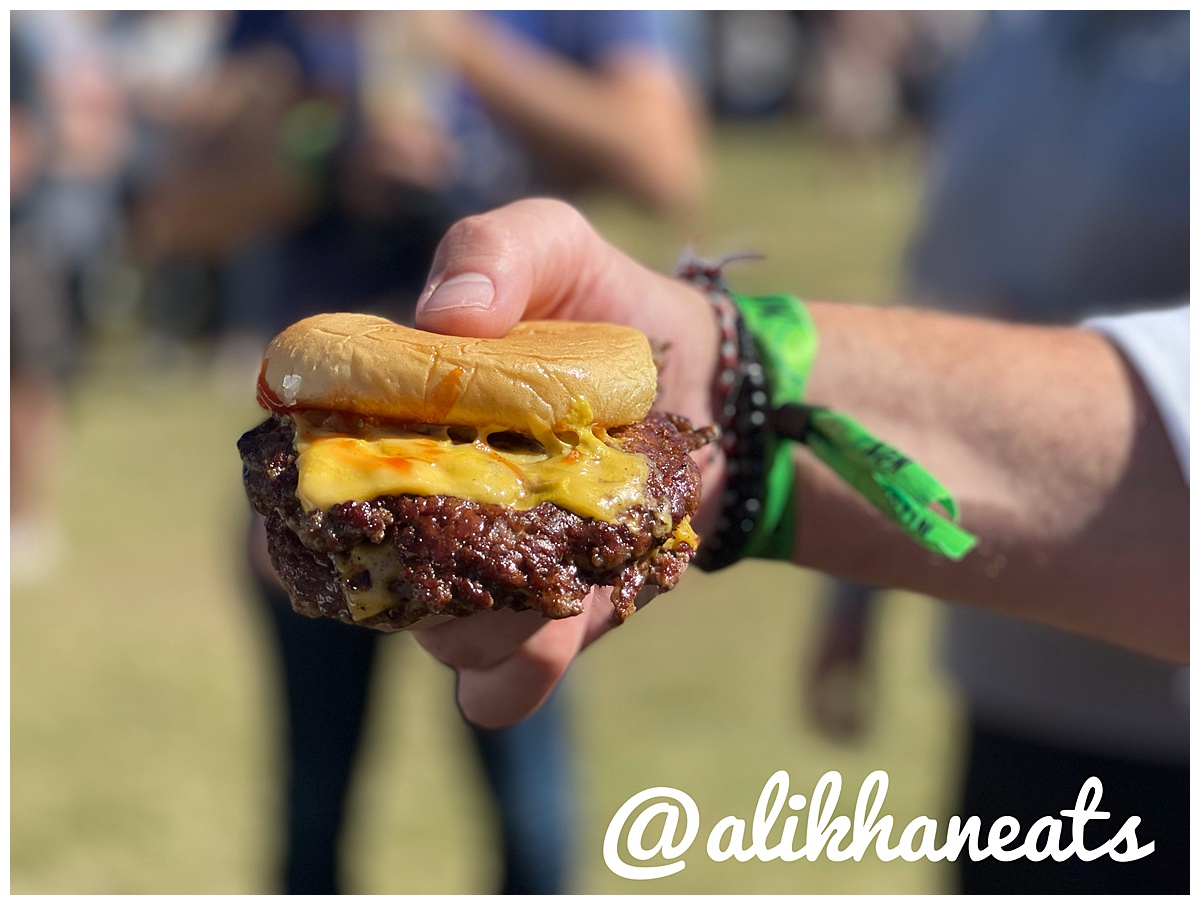 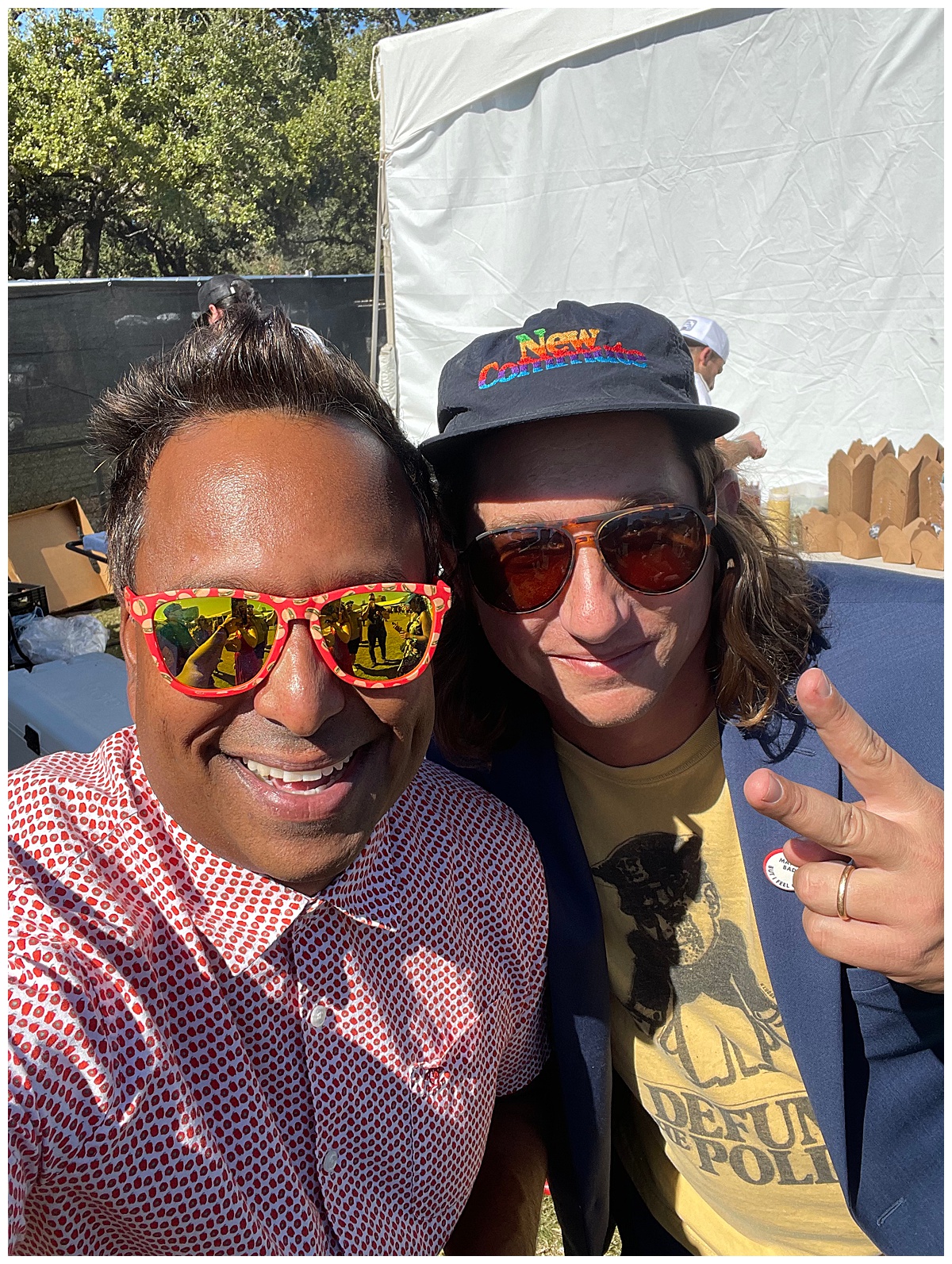 The most hyped burger in Austin

Bad Larry Burger Club is a smashed burger pop up that has taken Austin by storm. The instagram account alone is worth a follow. Lines are long for Bad Larry and not just at Austin Food and Wine Festival. Luckily I was able to slip in and grab a burger along with a selfie with the man himself: Matthew Bolick. Matthew is behind three noteworthy burgers in Austin, Better Half and Hold Out Brewing along with Badlarry. I’ll be posting Hold Out soon . . . needless to say this burger was worth the hype. 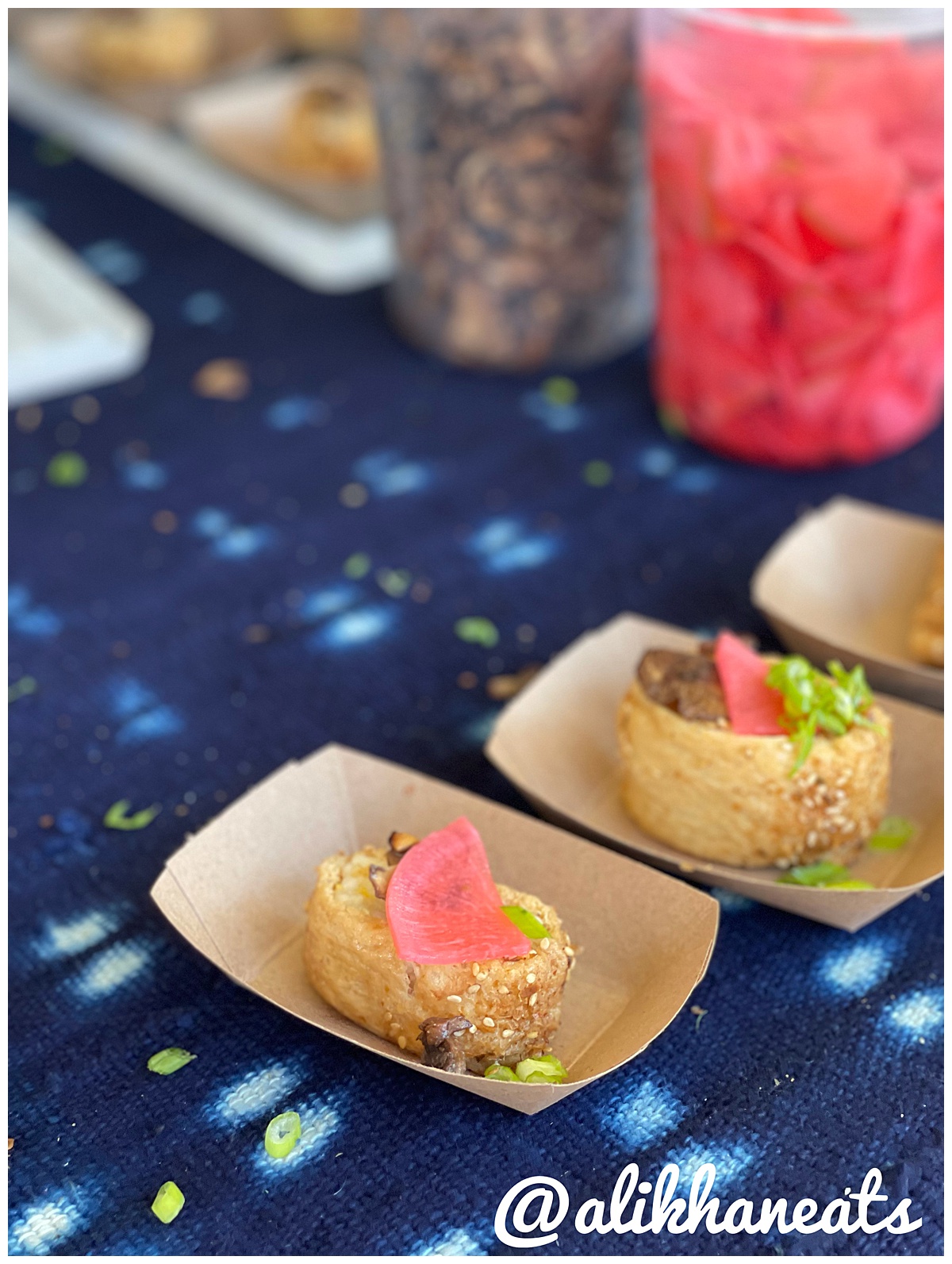 Shio Koji mushrooms are a gift from the Gods

At first glance, a deep fried tofu pocket stuffed with rice and a Japanese omelette might get passed over for a taco. I’m so glad I didn’t pass this up for a taco. Also because I got a taco anyways. The rice and egg mixture was just magic, as was the shio koji mushrooms. The watermelon radish might get the instagram likes but the mushrooms, marinated in a fermented rice liquid stole the damn show. I’m obsessed with getting a bottle of this and getting to work in the kitchen. 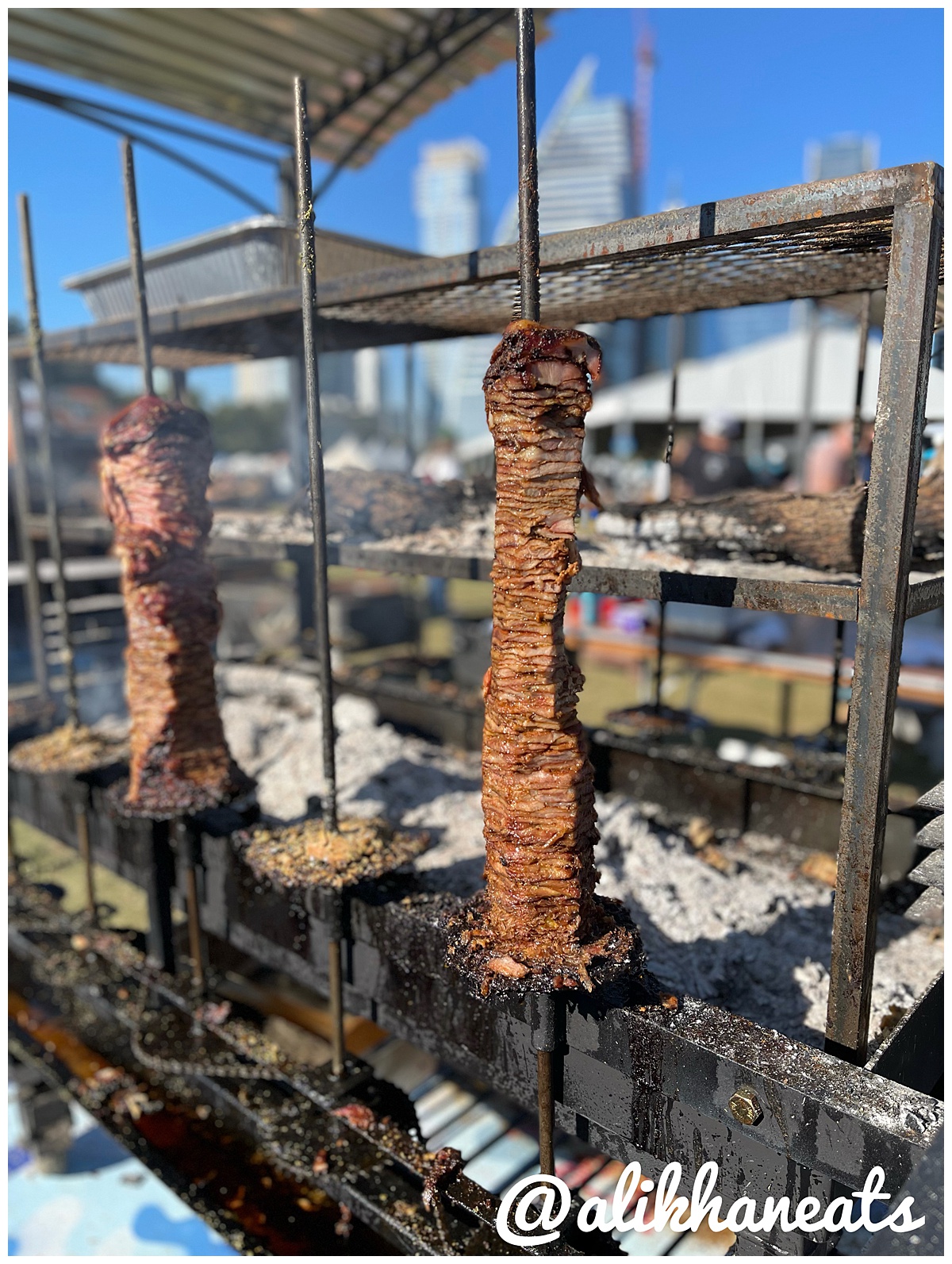 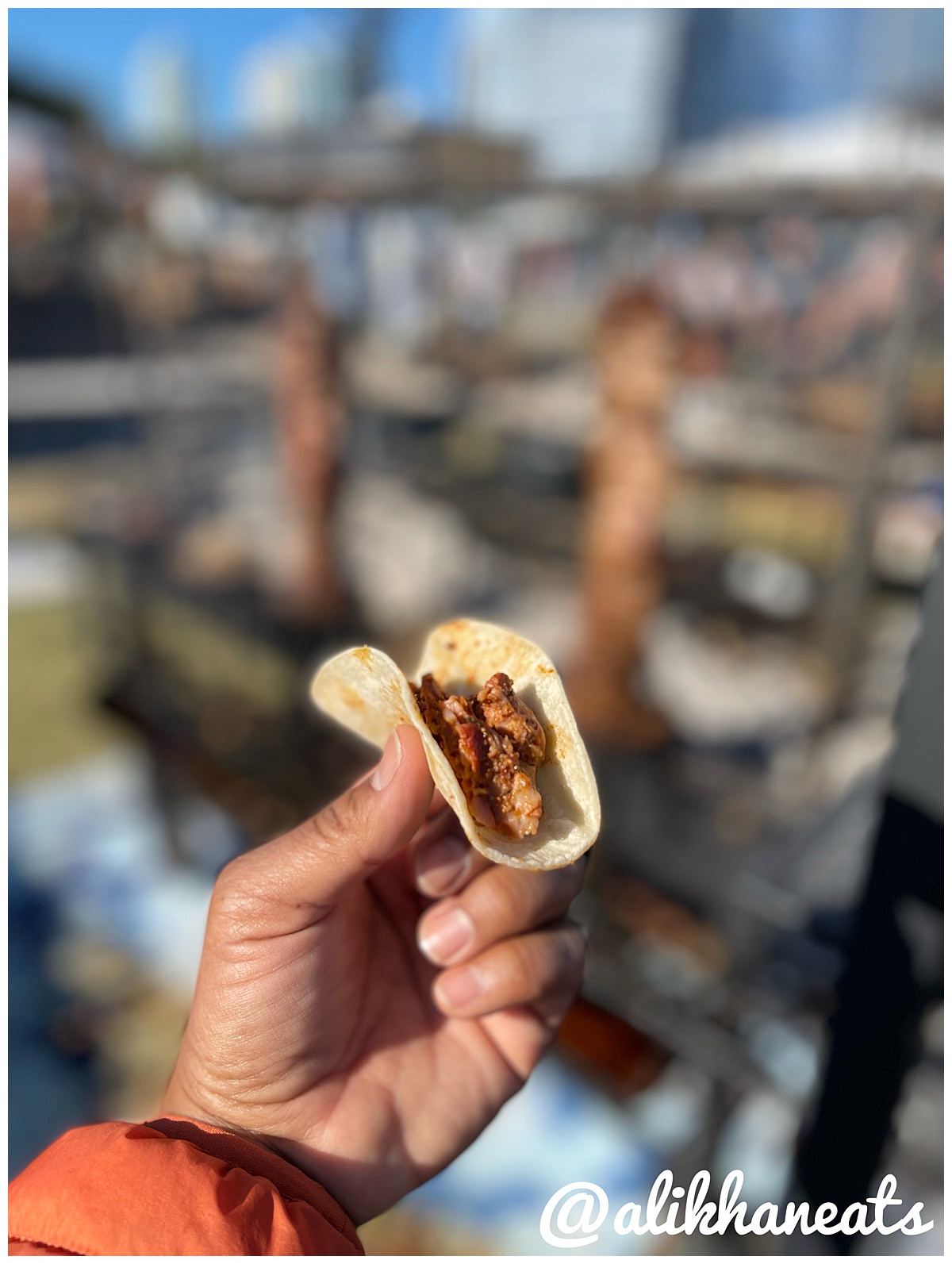 Let’s taco about it

My pals at Stiles Switch BBQ brought it with their open pit Al Pastor. The Mexican version of Shawarma was meant to be cooked over flame and even though I caught the tail end, this taco rocked. No salsa neccesary when Al Pastor is cooked over open flame. 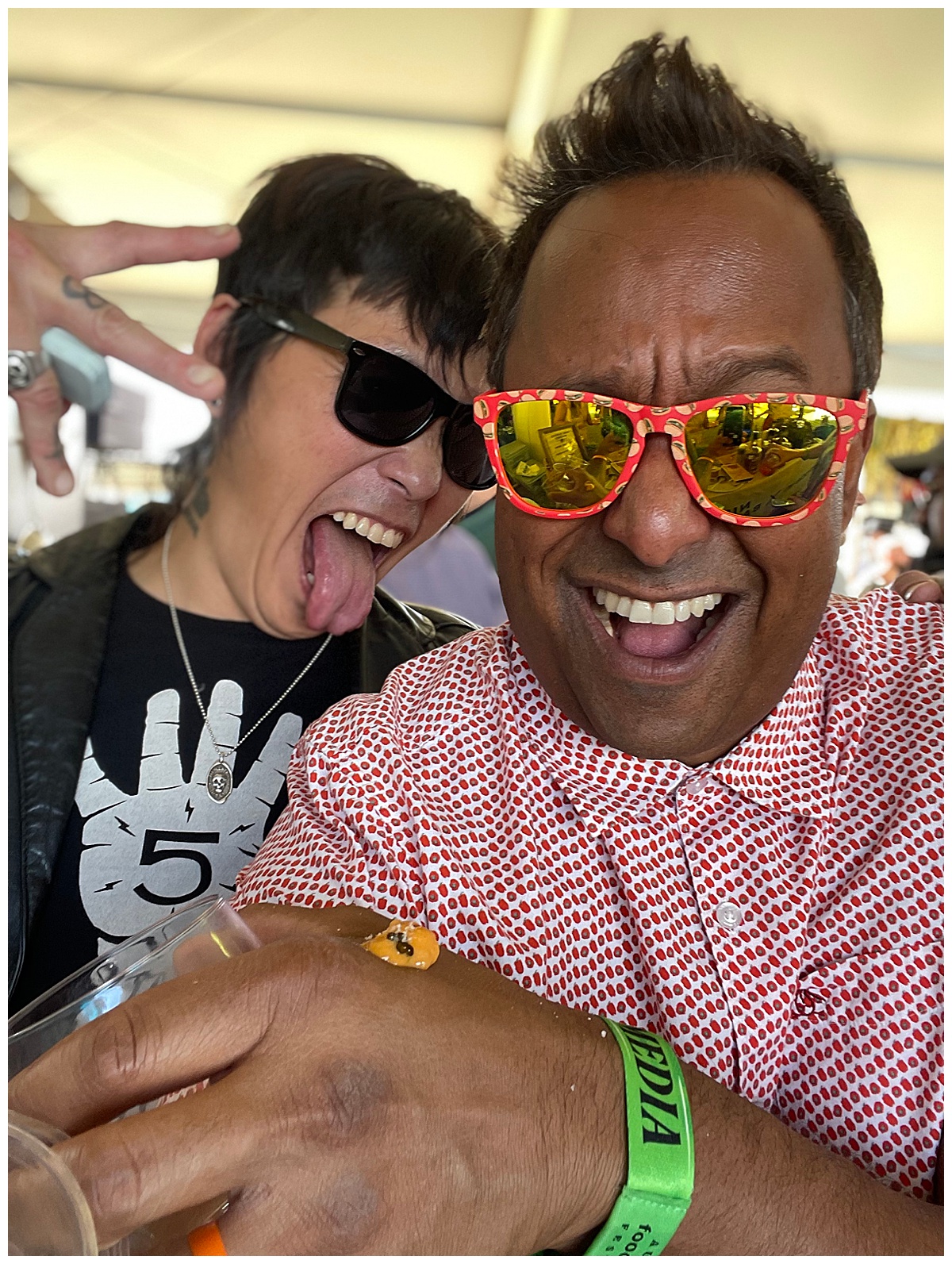 This is me and Chef Yoshi Okai of Otoko Sushi. Chef Yoshi was named best new chef of 2017 in Food & Wine, and his restaurant Otoko tops my sushi splurge bucket list. He was serving uni and caviar bumps on people’s hands with a sprinkle of salt. This was my last bite at Austin Food and Wine Festival and was the perfect cap to the weekend.

I highly recommend coming to Austin Food and Wine Festival, coming early and hit up as many of the short lines as you can. Like all festivals there are lines to contend with but there are great bites to be had all over the place and sparkling rose will get you through it all!