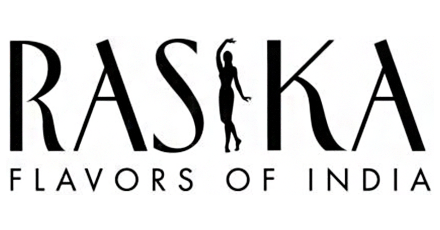 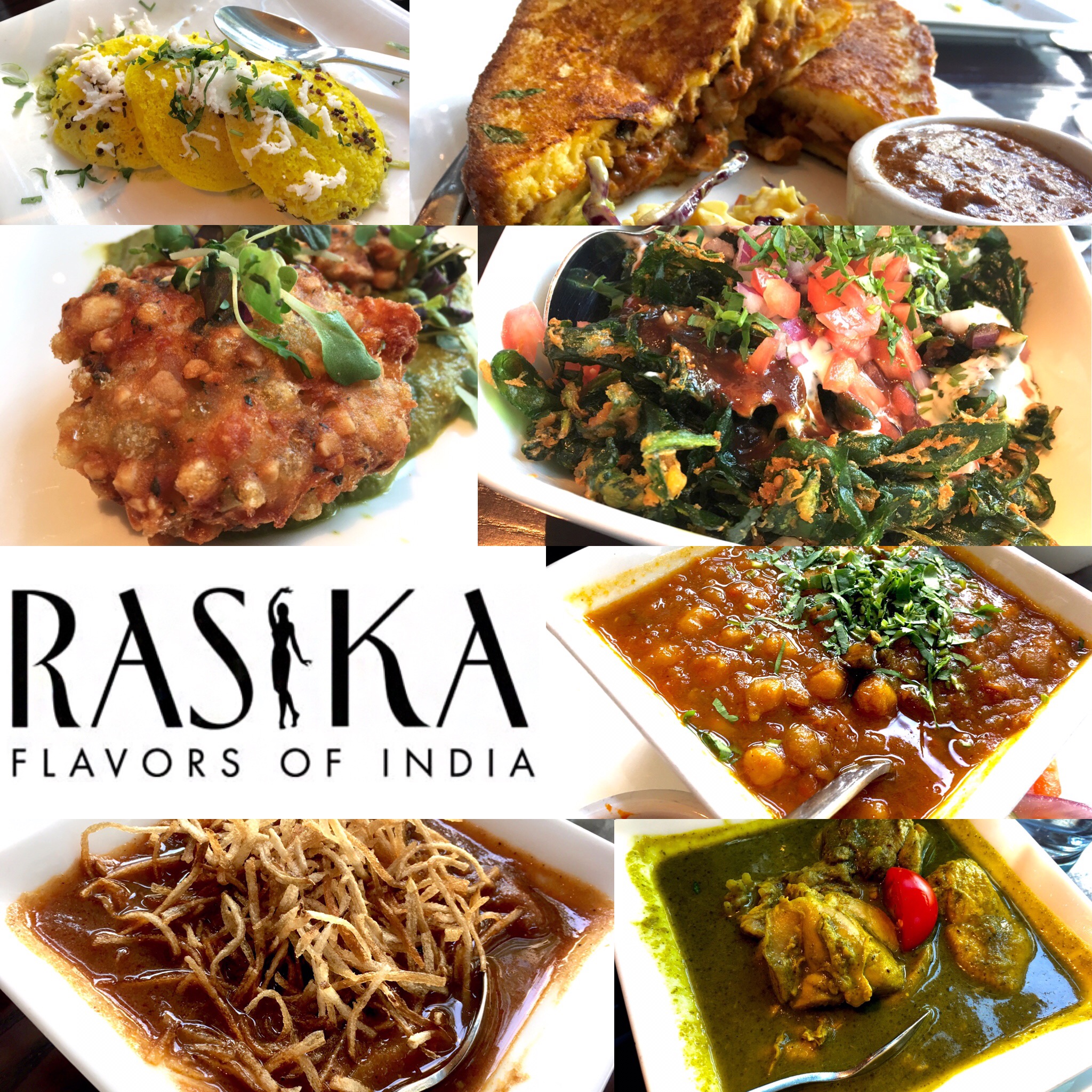 If someone was to ask me for a good Indian restaurant recommendation, my first thought is a divey curry joint. Not one in particular really, although I think back to the four or five blocks of LA’s Koreatown that became designated Little Bangladesh, and the ideal spot has a row of steam trays to be avoided, Bollywood videos blaring off a cheap television set, members of the Indian sub continent diaspora lounging about for most of a hazy afternoon, and of course one regional specialty, like a goat biriyani, that really brought you here in the first place. Expect your china to be chinet, your silverware to be plastic and your appetite to be truly sated. Portions will be generous and the powerful aromas of the dining room will also be found on your plate(and your clothes). If you order wisely your meal will be most certainly regional, “authentic” if that words suits you. Legit is how I like to describe places like these.

Rasika ain’t that but it is all that, and more. Cheap Eaters will be intimidated by Yelp’s dollar sign designation of $$$. When you walk in the joint, expect those kinds of high ceilings that only a marked up yet decked out wine cellar can provide. Yes, this is high end Indian which is not the norm in the US. After all this is a cuisine that thrives on street food alone. But that doesn’t mean Indian cuisine, or any non western world cuisine doesn’t deserve a little posh and glamour every now and then. And if you are looking for some Bang for your Indian Buck, try hitting up Rasika with some friends. We did a feast for four that came out to be about $20 a head. And it was good. How good? Well I guess it’s time to find out. 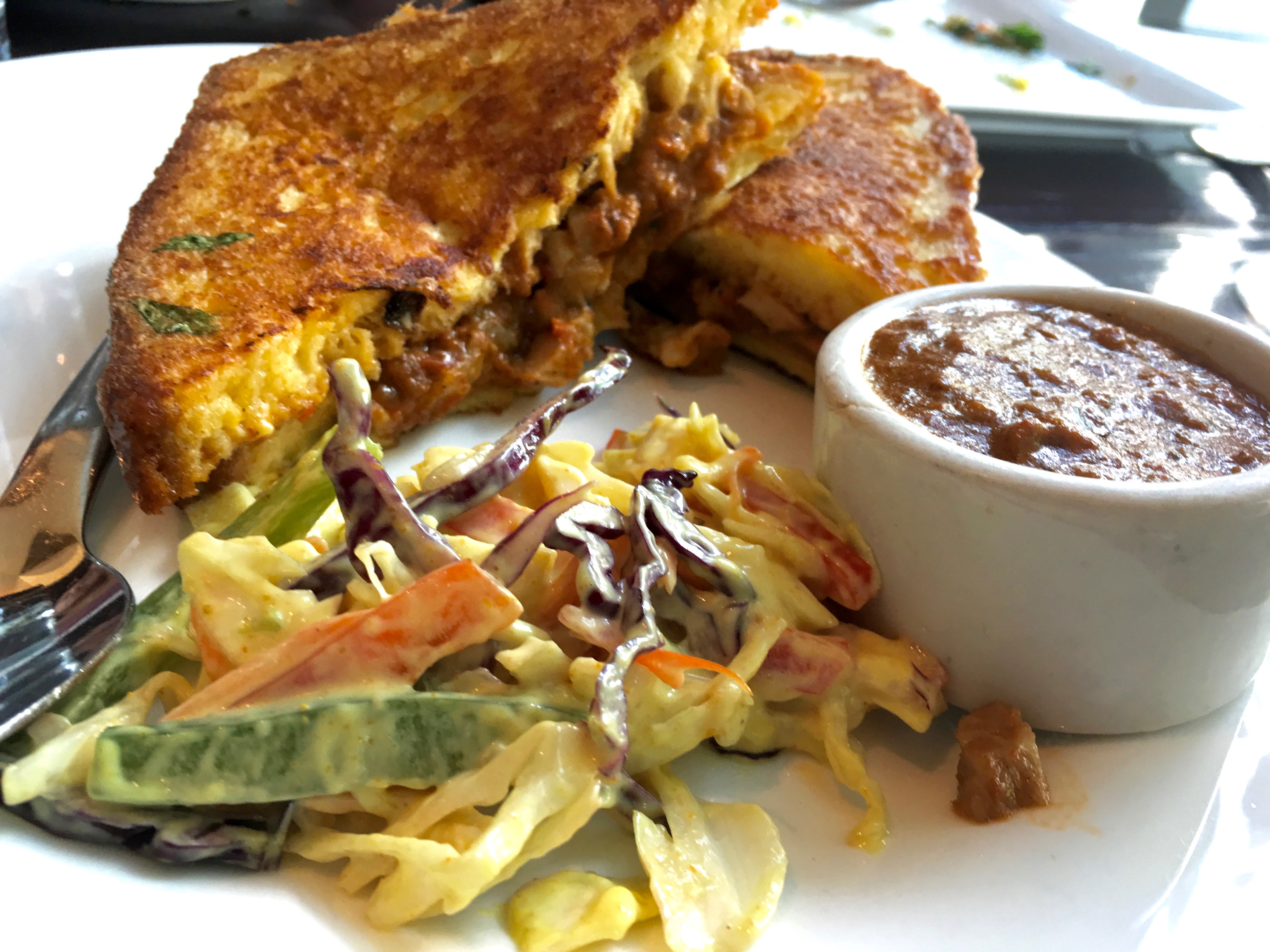 Nothing screams Indian food more than Chicken Tikka Masala. Even though it’s origins are as English as Fish and Chips, like General Tso’s Chicken, CTM(as us pro’s refer to it as) is part of the Indian food canon, whether the traditionalists like it or not. The frequency of this dish, along with the frequency of average Indian restaurants that do more business with delivery and take out then dining in, tend to make a CTM sighting seem a bit ho hum. Like seeing Lindsey Lohan on a US weekly magazine cover about 10 years ago. But you slap that on French Toast and suddenly we are talking Justin Bieber at your front door asking if he can use your land line to call AAA. You probably don’t have a landline and maybe you see through my thinly veiled attempt at pop culture but you cannot deny the idea of forward thinking with food which is what Chicken Tikka Masala French Toast is. A chef having fun with a genre that appears stagnant, at least with Indian restaurants in the US. Also the dish just worked. Yes it sounds weird and even a bit gimmicky but when one is having Indian food for brunch at a high end joint – the rules of engagement are altered. So roll with it. 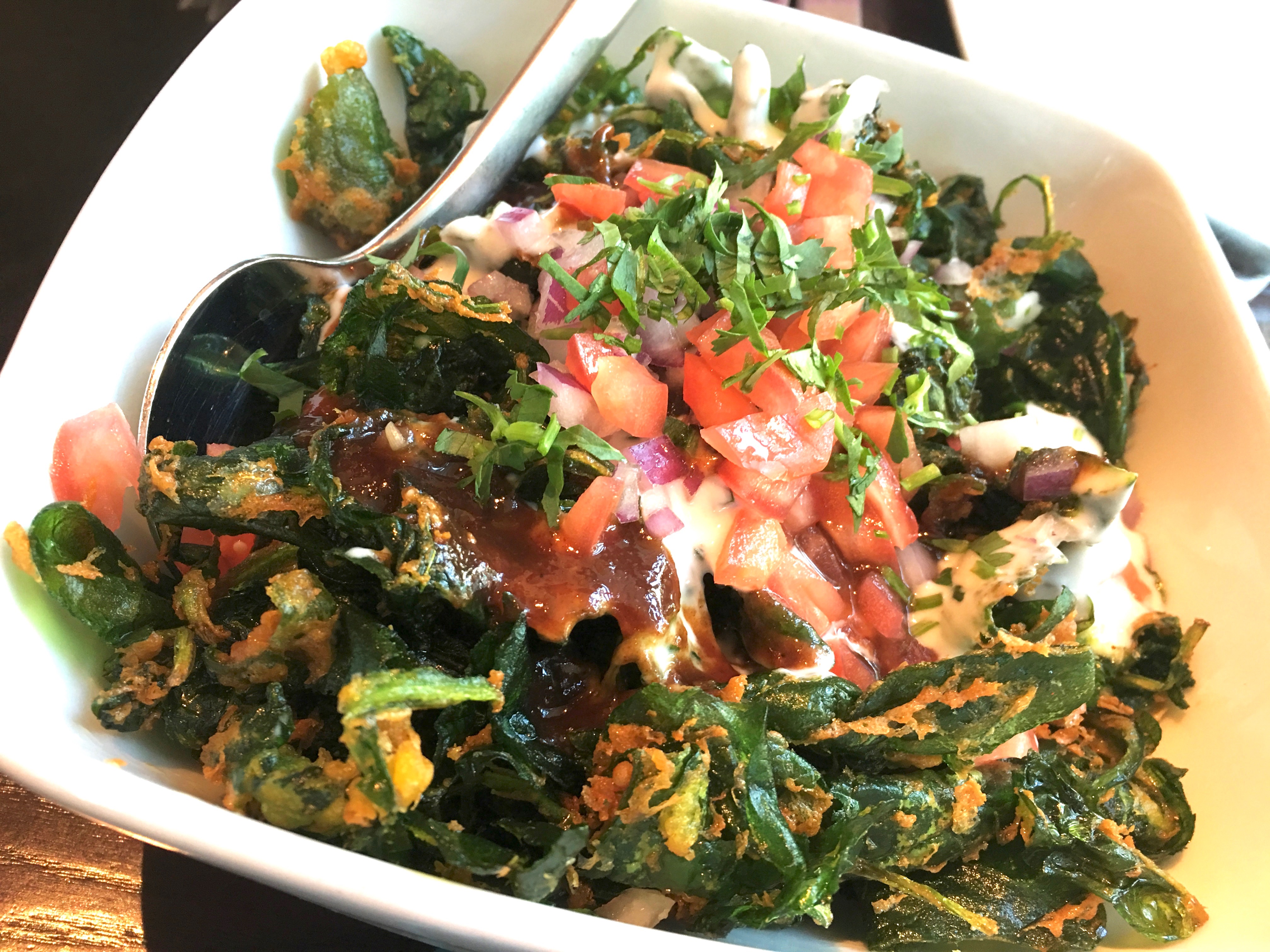 The Vitals:
the spot: Rasika 1190 New Hampshire Ave NW Washington DC 20004
the eats:  Palak Chaat – fried spinach with yogurt, tamarind sauce and date
the bucks: $10
the full nelson:  you know there is more to Indian food than Saag Paneer

Tonight I made a staple dish for my family: dal. If you are reading this post, chances are you are more than familiar with the lentil curry; it is truly a staple of the Desi diet. While my peoples hail from Bengal, where fish and meat always had a place on the table; I do marvel on how good Indian veg dishes are. You really don’t need meat to enjoy the cuisine of the Indian Sub Continent, unless we are talking biriyani, but I digress, veg is where it is at and Palak Chaat is certainly that. Chaat means street food and in some ways this dish is as humble as street food should be. But considering we don’t roam the streets of Mumbai or New Dehli, certain flavors, like the sweet and sour tang of tamarind are simply foreign. Add that pungent fruit as a sauce onto fried spinach and yogurt, and you are covering the Indian palate oh so well. The fact that the spinach is fried makes it a fine dish to share and the tamarind kick keeps you coming back till the next course arrives. The tang of this dish gave it an almost palate cleanser quality which comes in handy when you are juggling three curries, a Gujurati Dholka and Chicken Tikka Masala French Toast. It’s all about balance when you are overeating. 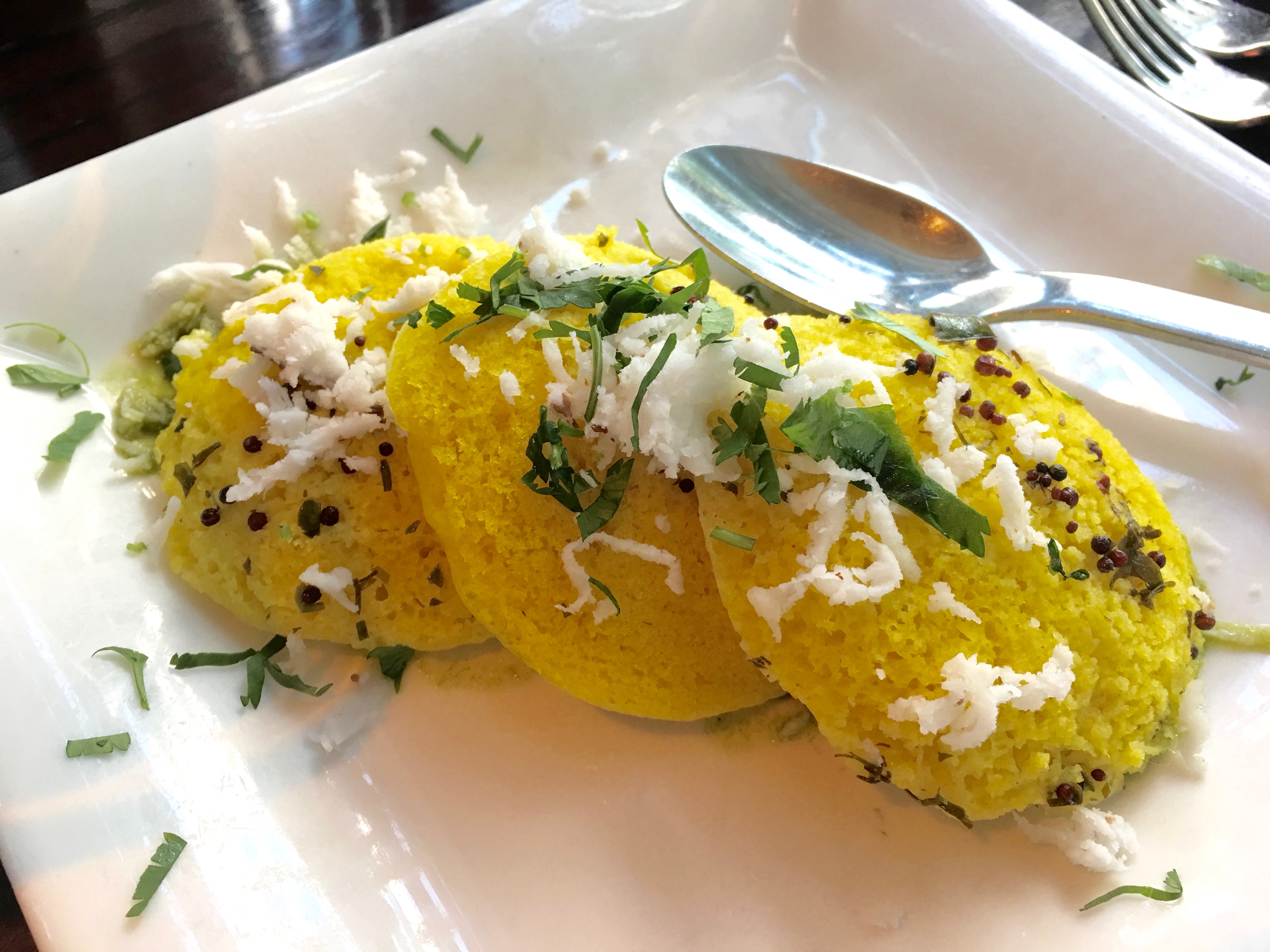 The Vitals:
the spot: Rasika 1190 New Hampshire Ave NW Washington DC 20004
the eats:  Gujurati Dholka – Steamed lentil cake with ginger, green chilies and a mint cilantro chutney
the bucks: $8
the full nelson:  if you want to impress an Indian with your knowledge of regional foods . . .

Gujurati Dholka is as pleasurable a dish to eat as it is to look at, or heck even photograph. Both a breakfast and snack staple from the State of Gujarat, these delicate cakes are composed of a fermented batter made from rice and chickpeas, which are then steamed before being being served. The fermentation gives the cakes a slight sour kick, not unlike injera; the Ethiopian bread staple. Unlike Injera, the Dholka was not very filling. The key to eating Indian food for brunch is to not get too heavy too quickly. This is where a place like Rasika shines: mixing up delicious regional dishes with familiar hearty fare. We knew curries would be in our future, so having the Dholka early on was just wise planning. Thankfully I was taken here by a seasoned regular – hey, it helps to know people. 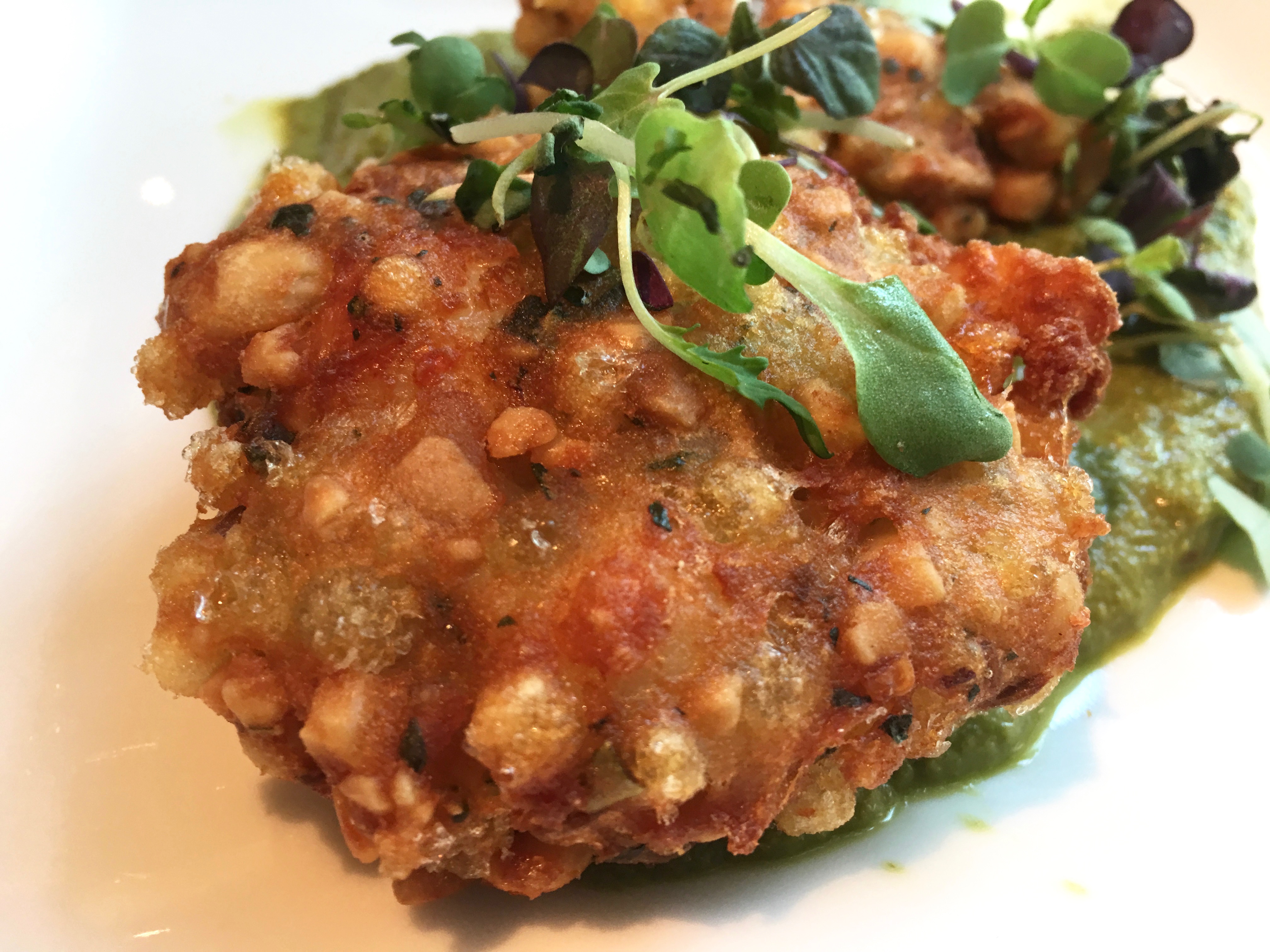 The Vitals:
the spot: Rasika 1190 New Hampshire Ave NW Washington DC 20004
the eats:  Shrimp Wada – a shrimp patty studded with peanuts, tapioca and a coconut chutney
the bucks: $12
the full nelson:  Not your mama’s Coconut Shrimp

Since my feast at Rasika took place at Easter and we are now a couple days deep into August, I had trouble identifying this delish little fritter. The beauty of eating at a place like Rasika is that you will be inundated with loads of regional Indian specialities, many of whom seldom see the inside of a restaurant in the US. My detective work(my friend Neetu figured it out) led me to identifying this dish above as ‘Shrimp Wada”. Beyond the use of tapioca and peanuts which are wholly foreign to the (Bangladeshi) food I grew up on, the dish appears to be a favorite snack from the state of Kerala, in southern India. Surrounded by the sea, it should come as no surprises that this part of India has a fondness for seafood. What I love about Kerala is that it is one of the few places in the Indian Sub Continent where you can eat anything, including beef and pork. Yes, my friends, there are indeed decadent Desi peeps out there. You are not alone. Now pass that shrimp wada. 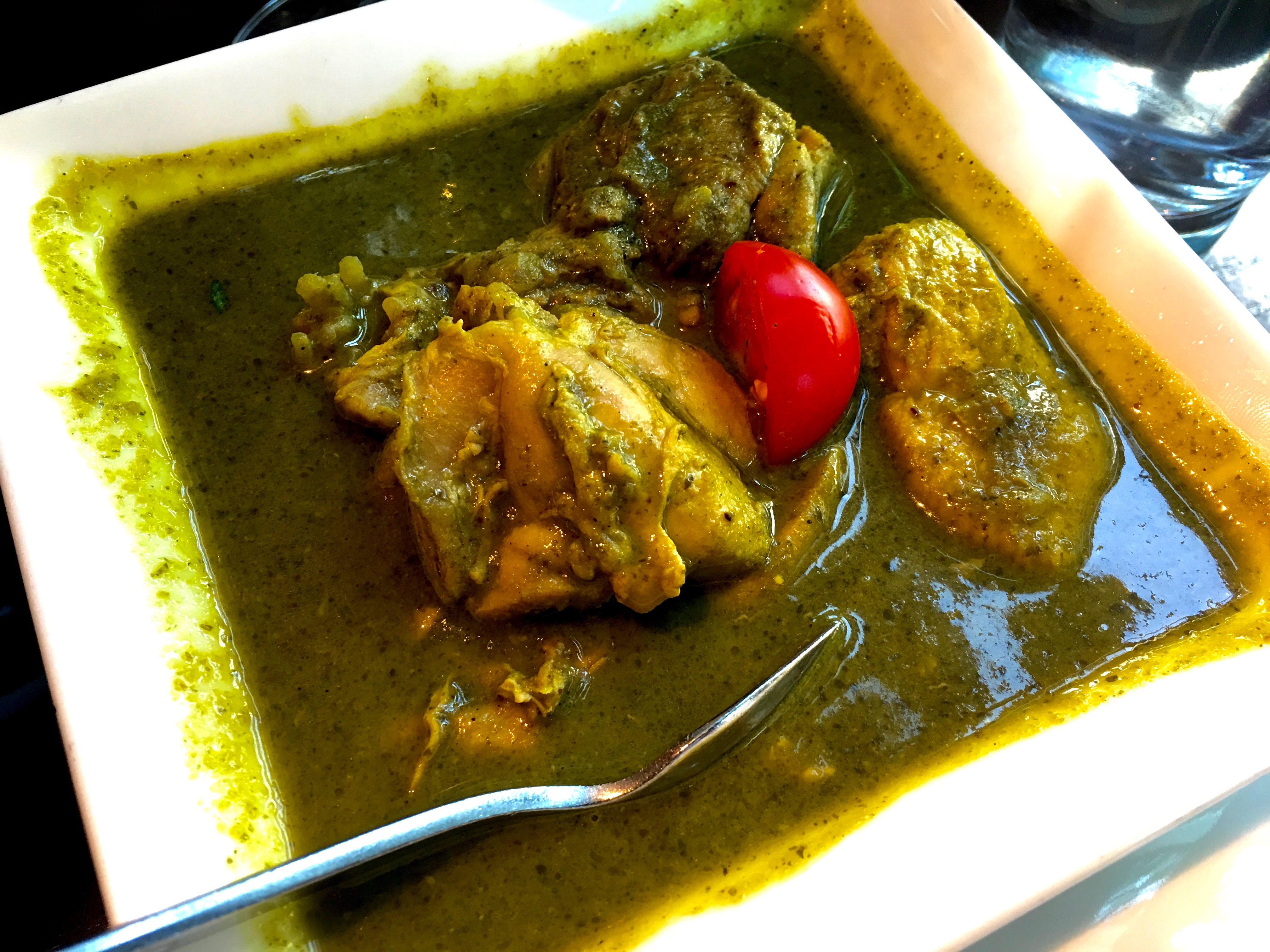 It may have been brunch but you know curry was going to make an appearance in this meal. I find Indian food to be downright “light as tapas” elegant when you take away the rice component. A series of tikka and fritters + cocktails makes for a splendid evening. But brunch, when done right, also means day drinking, so the comfort of curry and rice is always a welcomed sight. The Green Chicken Curry was one of three we would have and it is simply splendid to have a chicken curry that doesn’t rest on the powers of cream. Not that the mixing of cream with a turmeric soaked mirepoix of onion, ginger and garlic isn’t a wonderful thing, it is, but a good curry need not rely solely on dairy. That’s where coconut milk comes in handy. Just enough richness and a touch of sweet to round out the aromatic broth. Growing up, this was the kind of curry we had – where the flavors of the meat, in this case the chicken, really stand on there own. 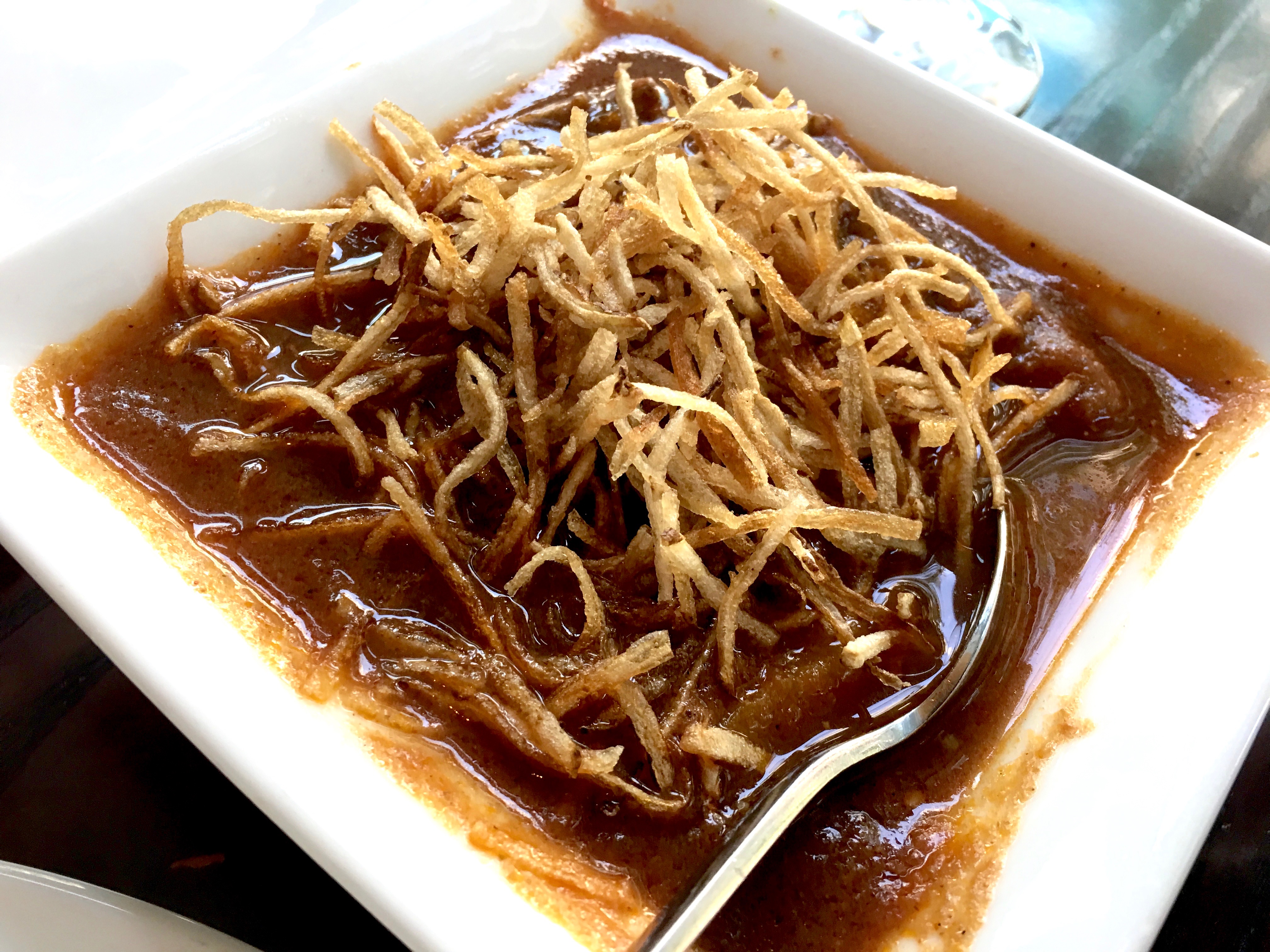 Earlier I sang the praises of vegetarian Indian dishes but if there is one thing that could break me on a veg only path at an Indian restaurant it would be a good lamb curry – they never seem to let you down. More so than beef or pork, lamb takes the best to Indian spices and the fact that it has a distinct flavor of its own is probably why. You can separate the average from the exemplary Indian restaurants(that serve meat of course) on how good their lamb is. Is it tender? Is it spiced well? Is the sauce with the rice as decadent as the meat itself? In Cheap Eats Season 2, I had a Cioppino in Des Moines and my favorite part wasn’t the shellfish but rather dunking the bread in the broth. A great lamb curry should bring you to do the same with naan or  a forkful of rice with the curry sauce. Yeah, dal is great but man it doesn’t hurt to have a little lamb curry lying around. Like maybe for dessert. Yeah I guess I won’t be going vegetarian anytime soon. 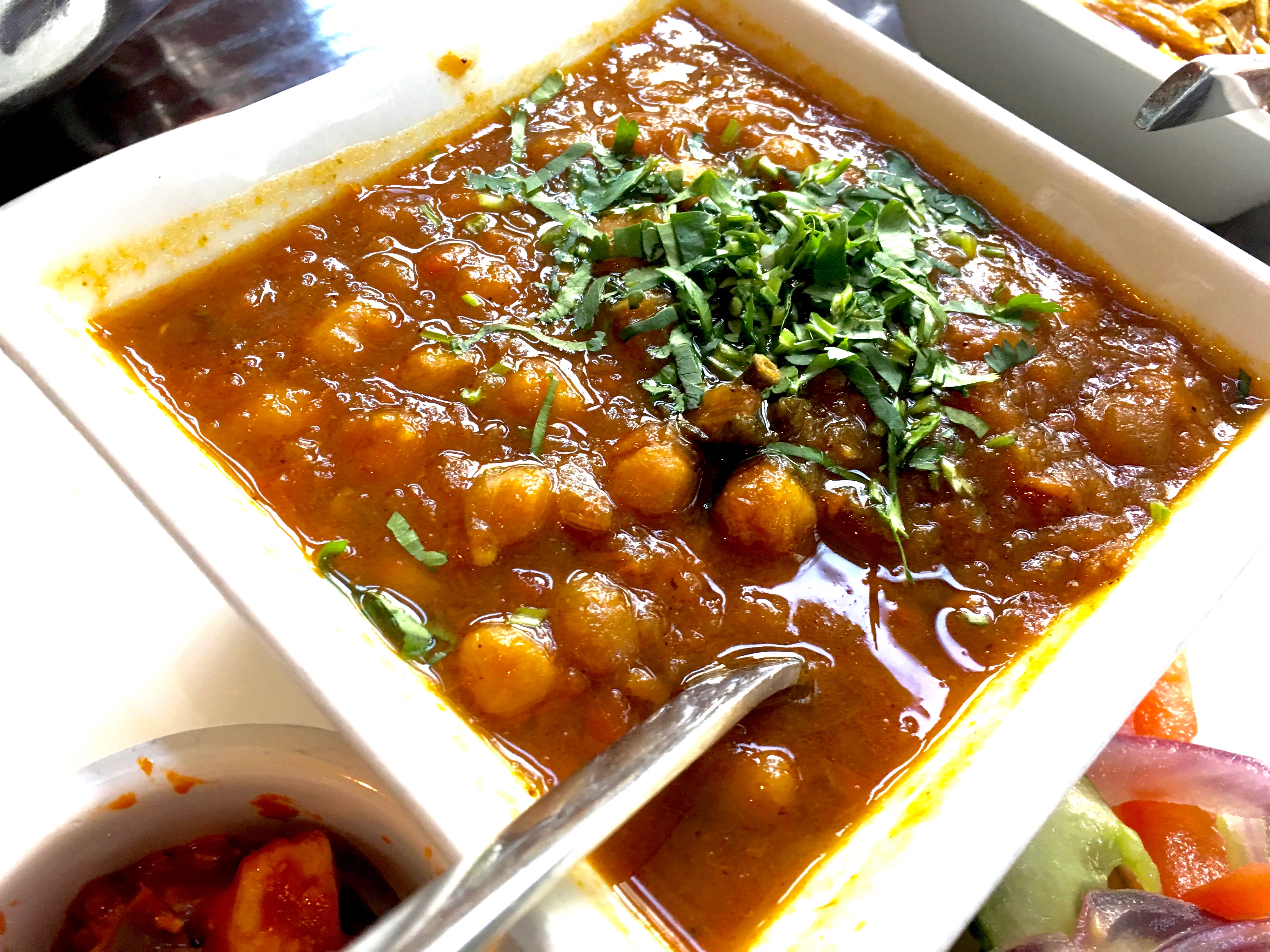 The Vitals:
the spot: Rasika 1190 New Hampshire Ave NW Washington DC 20004
the eats:  Chloe Batura
the bucks: $12
the full nelson:  the chana masala that Punjabi MC would be down for

If you’re looking at the curry above and wondering why it is called Chloe Batura vs Chana Masala then A) you know your Indian food and B) you don’t know Punjabi MC, or maybe not well, because “chloe” is the Punjabi word for “channa” also known to us English speakers as chickpeas. A global staple, chickpeas, or garbanzo beans as I call them because I buy cans of ’em from the Mexican Grocer are second only to lentils as the plant protein of choice when fricasseeing up some curry. Rasika does the Punjabi version of Chana Masala called Chloe Batura which is similar enough except for the addition of a fried bread called Batura(not pictured). Even though dal is my favorite, chloe makes for a fine, not missing the meat type of curry and being a delicacy from Kashmir, you know the spice is gonna be there. Disputed regions tend to like their food well seasoned. At least, so I’ve been told.

And that was that. Grand total for this meal was $22 per head, divided between four people. Knowing we had three curries to share means we all walked away full and being brunch means we took advantage of a appetizer heavy strategy. Indian food is meant to be shared so it should come as no surprise that this meal was a success because we ordered as a group. Years ago I went to an Indian restaurant where some guests chose to go there own way. They paid more, walked away with left overs and never seemed to want to go back. It goes to show you that you can’t ignore the culture behind a cuisine. Share and ye shall reap the rewards of a cuisine meant to served on a communal table. It’s kinda of like Thanksgiving but every day of the year.

Maybe that’s why I was never a skinny kid. 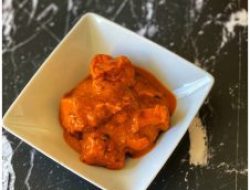 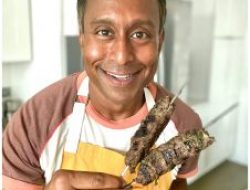 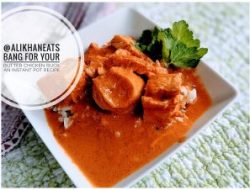