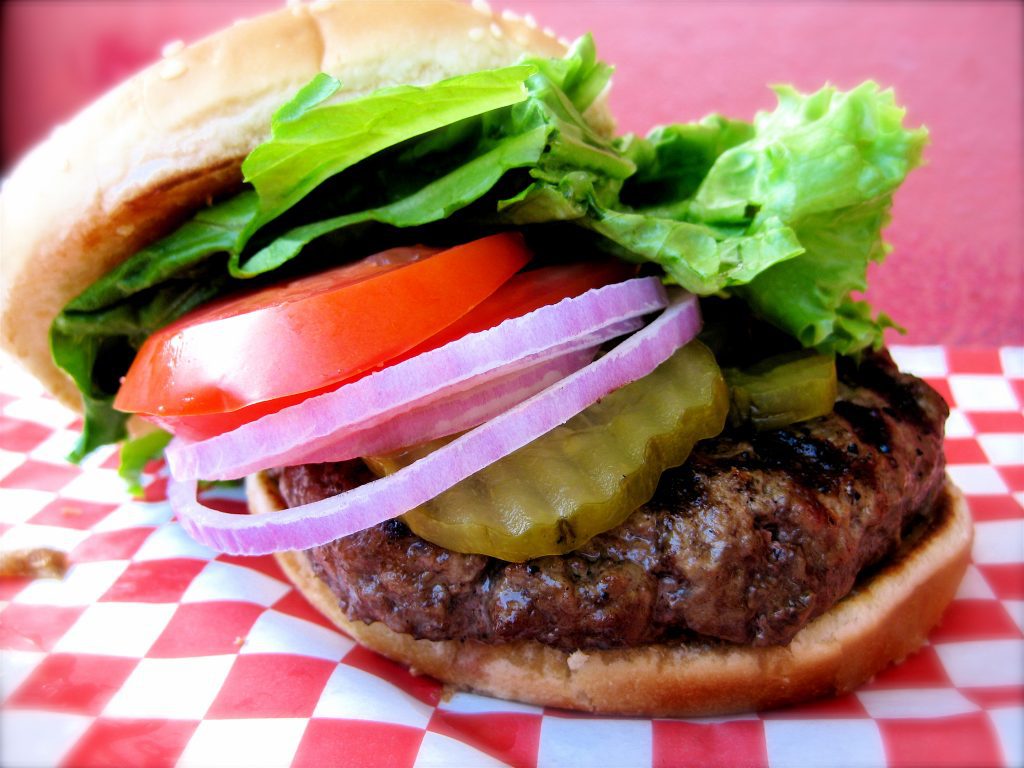 The Vitals:
the burger: The Big Mouth Burger: a 1/2 pound of USDA Prime All Natural Chuck, charbroiled and served with lettuce, tomato, red onion, pickle and mayo
the bucks: $8.95
the coordinates: San Francisco, CA

Most of the country would balk at a cheese-less burger for $9, even if it was a 1/2 pound of USDA Prime all natural chuck and came with fries. But most of the country ain’t got nothing on a warm sunny day in San Francisco, which could just about sway almost anyone that you might be in the greatest city in America. This well reputed metropolis surrounded by natural beauty, enriched in culture, and well recorded in the history books, just about owned the food movement in America, if not the world, for the latter part of the 20th century. Farm to Table took root in the Bay Area first thanks to Alice Waters and spurred a whole generation of chefs to come. The Asian pantry collided with European cooking sensibilities here. I won’t even get into the whole wine thing, but I will say that when one looks beyond all the vitricultural brouhaha, the beer made in these parts is just as good. Yeah, San Francisco is a hell of a town, and an even better one if you are hungry. Finding a great burger is not a hard thing to do. Finding Bang for your Burger Buck – well that was kind of a conundrum.

In San Francisco, the “once humble hamburger“, as the SF Weekly puts it, has been thoroughly transformed by the all star roster of talented chefs residing here. The result is a booming burger majority of chef driven offerings found in neighborhood bistros, bar menus at high end restaurants, and even a redefined fast food local burger chain with a habit of incorporating jaw dropping food purveyors like Niman Ranch and Acme Bakery. This quality comes at a price and despite an exception or two, like Anthony Bourdain favorite Sam’s Burgers, you might be better off indulging in an $11 feast at Marlowe and have one of the best burgers in the city. With so many alluring options for just a couple bucks more, you may ask why I would even try this quiet little trifecta(three locations) of a Neighborhood burger joint? The answer is the neighborhood itself: the Mission district of San Francisco. 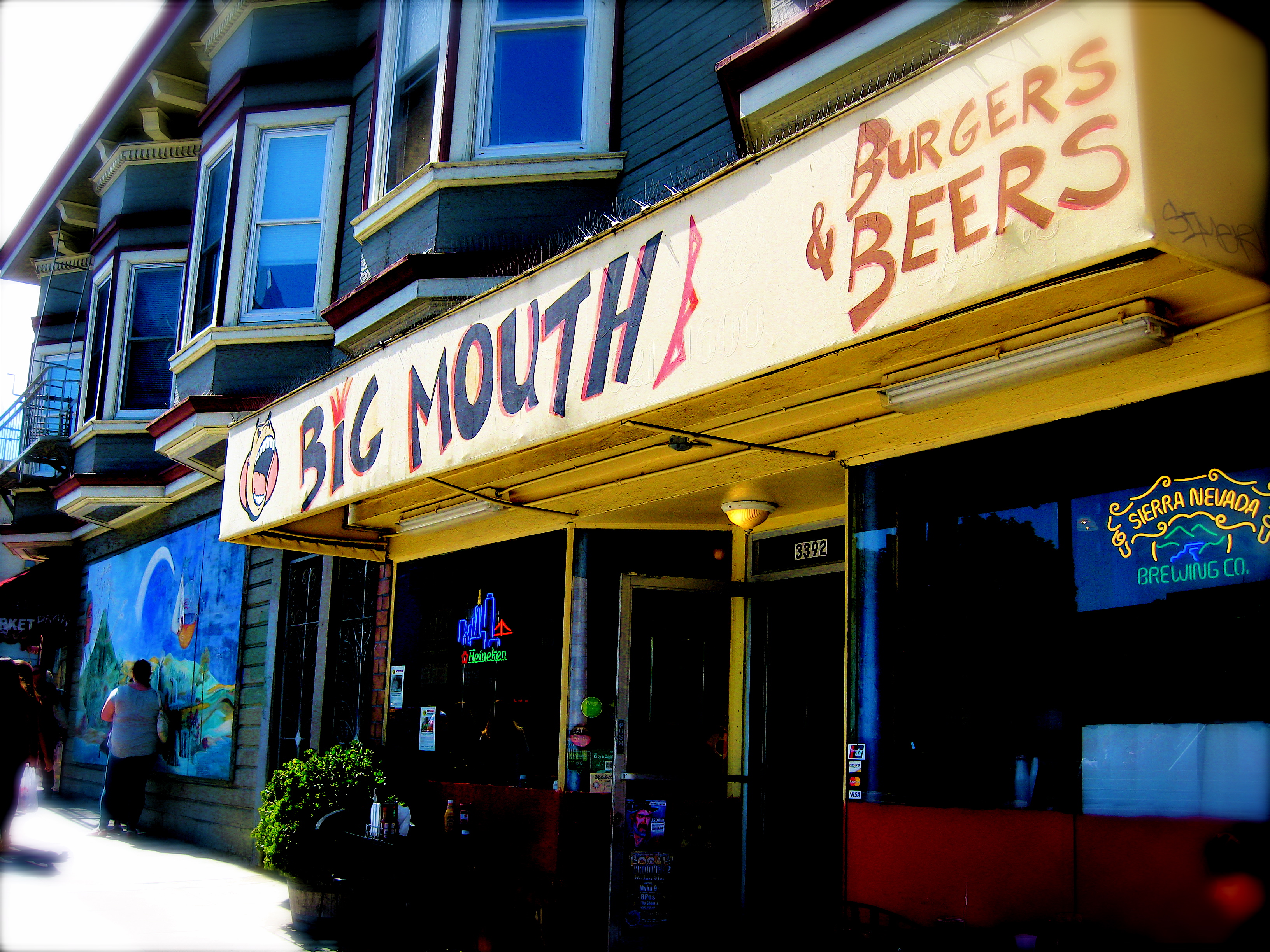 I have had the luxury of having a couch to crash on in the Mission since 2007. In the 8 years that have followed, I have bore witness to a gentrification that rivals even my current home of downtown Los Angeles. This window of change pales in comparison to what has happened from say even just 1980, when a home could be fetched for $100,000. Today, I would wager that a similar home, like one facing Big Mouth Burgers, will start at $1,000,000. If renting is more up your alley, plan on about $4k a month. Money isn’t a bad thing if you have it or if you like clean sidewalks, even Mission and 16th isn’t as bad as Skid Row in downtown LA. However along with those cleaner sidewalks, that rush of tech boom money and subsequent rising rents and real estate prices are pushing long time renters, the elderly and decades old small businesses out. The thought of the oldest neighborhood in San Francisco losing the last of its ubiquitous taquerias is sad one, but still is one that is all too possible. So with that backdrop and background in mind, allow me to tip my cap to a joint making burgers for almost 20 years. And when you take into account the fact that you could be standing in line at Big Mouth, killing time on Facebook next to the guy who invented Facebook; $9 for a hefty burger and fries starts to make some dollars and sense. 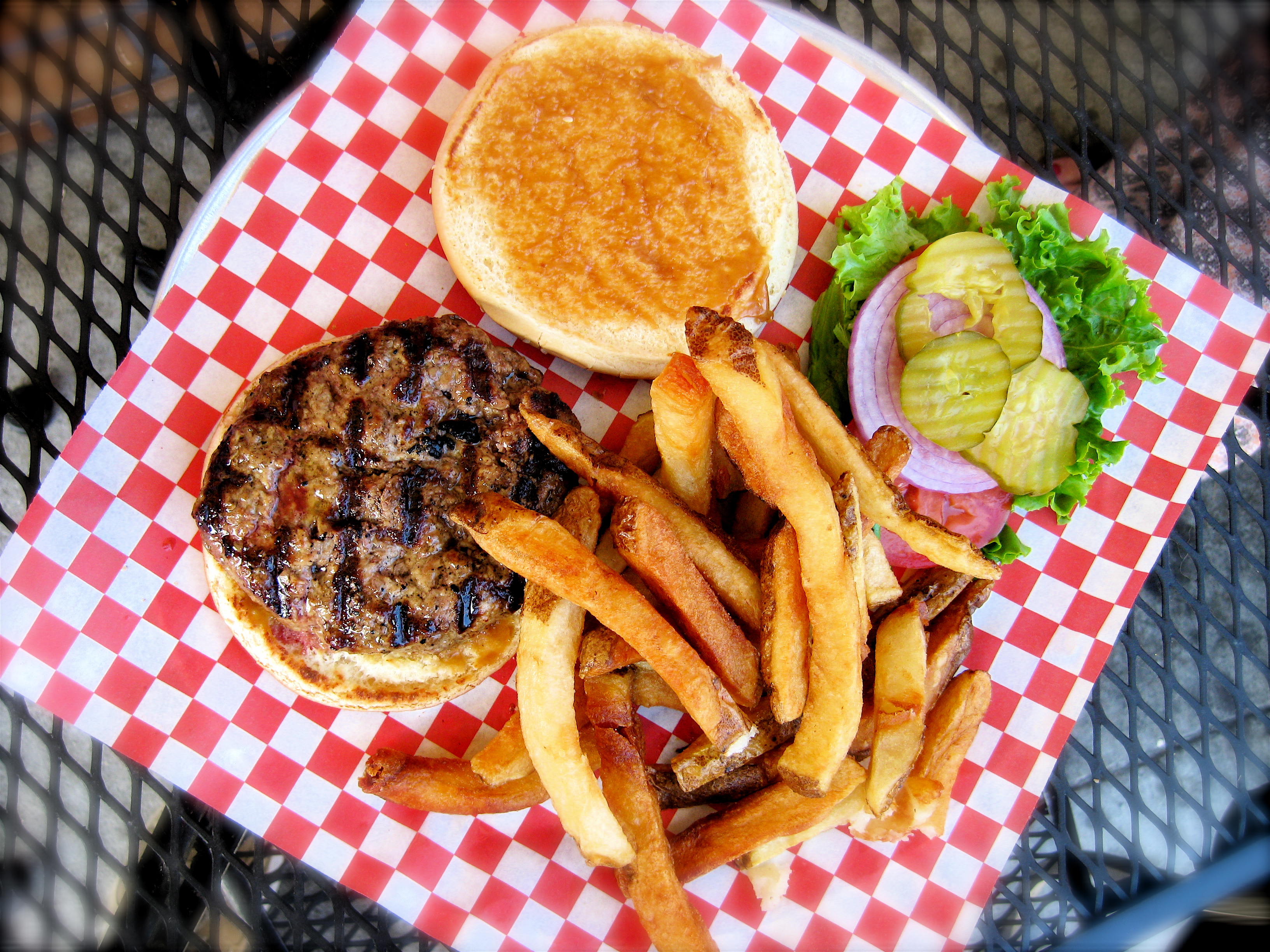 For most people, an “old school burger” resembles something out of Pie N Burger in Pasadena – that better than your average diner burger, wrapped in paper but made with love. For me, an old school burger is one presented open faced, a “shot in the arm” in terms of appearance which sets the tone that size and quality are the dominant themes for your burger experience. The full produce suite of lettuce, tomato, pickle is a given and red onion, a must. The star of the show is a thick beef patty, charbroiled to a rosy pink inside and noticeably juicy. These would have been considered “restaurant burgers” back in the day; no clever chef’s take on the genre to speak of – just a more substantial offering in volume and depth than the fast food counterpart, and for just a few more bucks too. 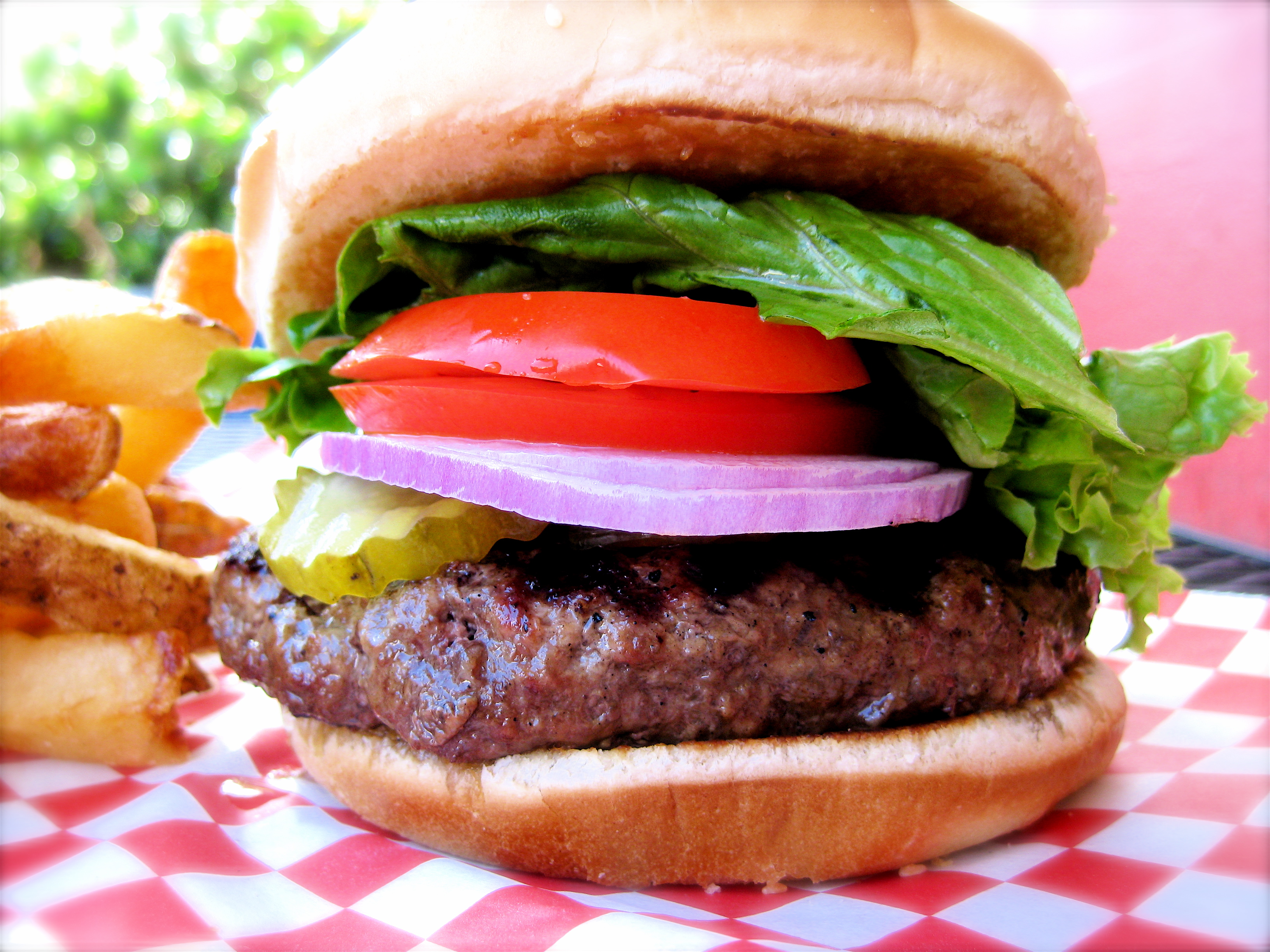 Though sparse on paper, the standard Big Mouth Burger is the embodiment of the aforementioned “Old School” burger. When fully assembled, you are facing a true blue double fister. Toppings are equally excessive to the beef, and there is just enough bun to hold it all together. Speaking of bun, yeah it came right out of a bag but boasted a freshness and general appeal more than the burger stand/liquor store varietal. When pressed about it, the nameless fella who has been flipping burgers for 20+ years referred to a local market where the buns were procured. The lettuce was Romaine, not exactly a revelation but fresh nonetheless, as was the tomato. The pickles were nothing to sneeze at, but they pop back into my mind more so because of revisiting the pics versus any sort of taste memory of refreshing pungency or crunch. For some, anonymously produced produce, non organic beef and a hamburger bun pulled out of a plastic bag all for $9 seems a little steep and it is, even considering the fact that you are in one the wealthiest neighborhoods in the country. But I would go back to Big Mouth for this reason and this reason alone: the beef. 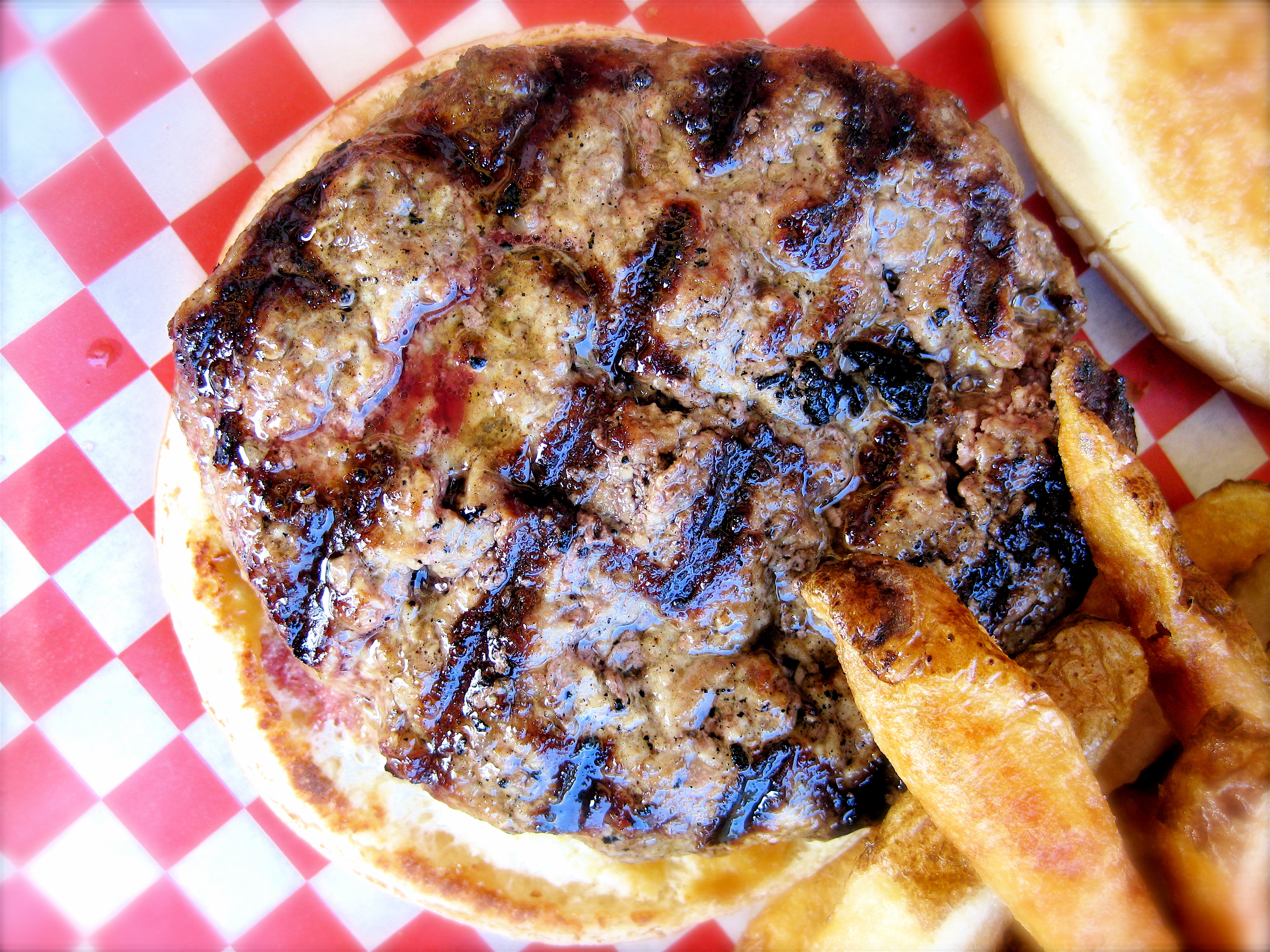 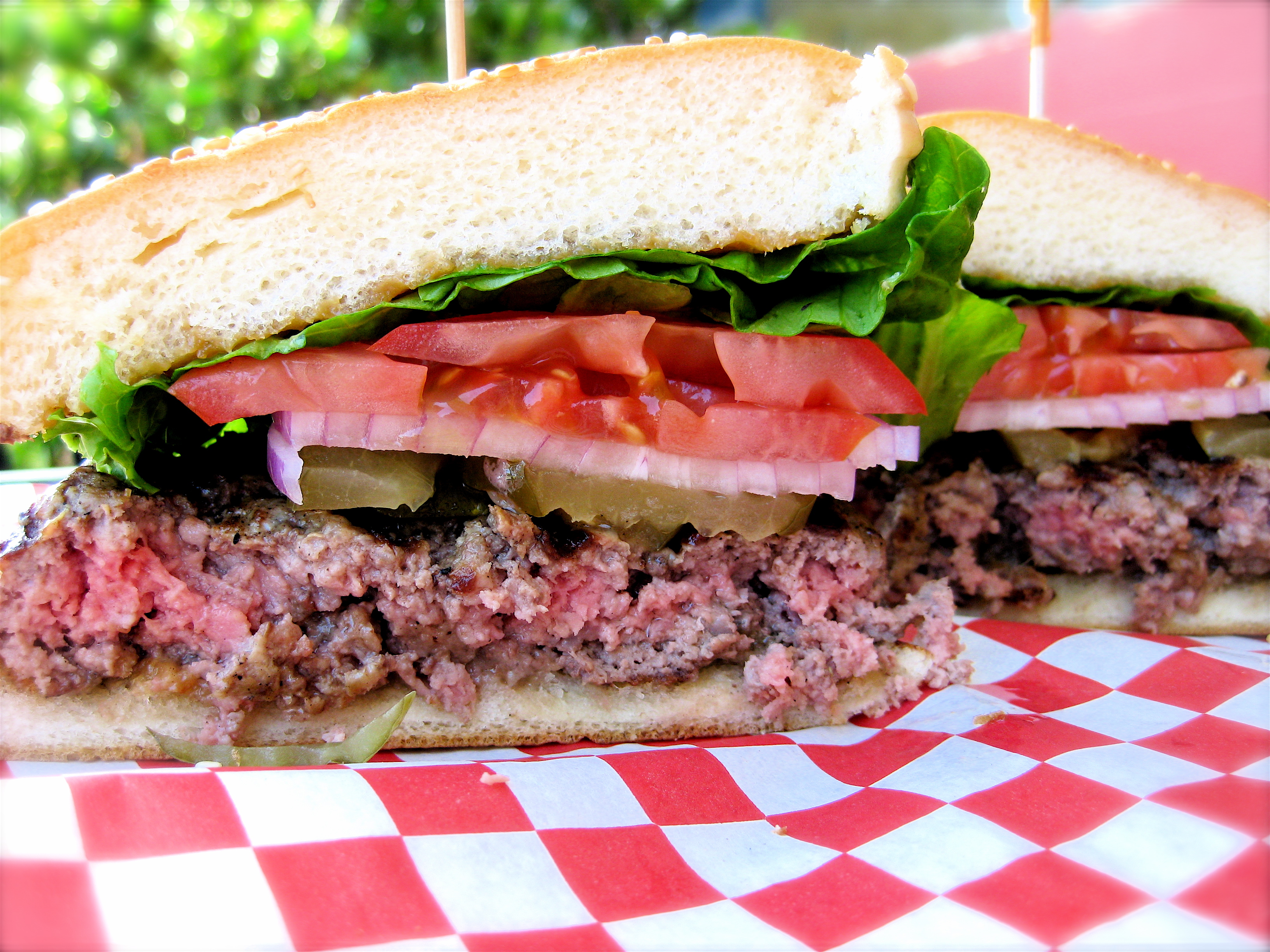 A delicious after effect about any type of name dropping on food ingredients is a shared confidence in quality that is communicated by cook and customer. The beef at Big Mouth isn’t Niman Ranch but USDA Prime is quality nonetheless. I grew up on medium rare, restaurant style burgers before the whole mad cow thing landed on our laps. This style is as much the burger of my youth as was the thin stack griddle style seen at the likes of In N Out, Shake Shack and Steak n Shake. Nostalgia aside, by virtue of trying to getting a burger for under $10, this experience at Big Mouth reaffirmed both burger and general food mantras about good ingredients needing little enhancement to stand out. At Big Mouth, the door to $12 burgers are paved with the likes of BBQ Sauce, Bacon, Onion Rings and of course cheese. As boring as it might seem, you don’t need any of them. USDA Prime Chuck is good enough to stand on its own. And the kicker is it doesn’t stand alone because the price includes fries. It doesn’t hurt that Big Mouth serves beer on draft but don’t expect much in terms of selection – a surprise not just considering that you are in San Francisco but given the current state of our Micro Brew Renaissance. But really, you aren’t at Big Mouth to be picky, you aren’t here to taste the creations of the city’s latest and greatest chef. You are here to fuel up on a 1/2 pound juicy burger with fries for $9. And given the hood you are in – you just had a piece of Bang for your Burger Buck SF style. 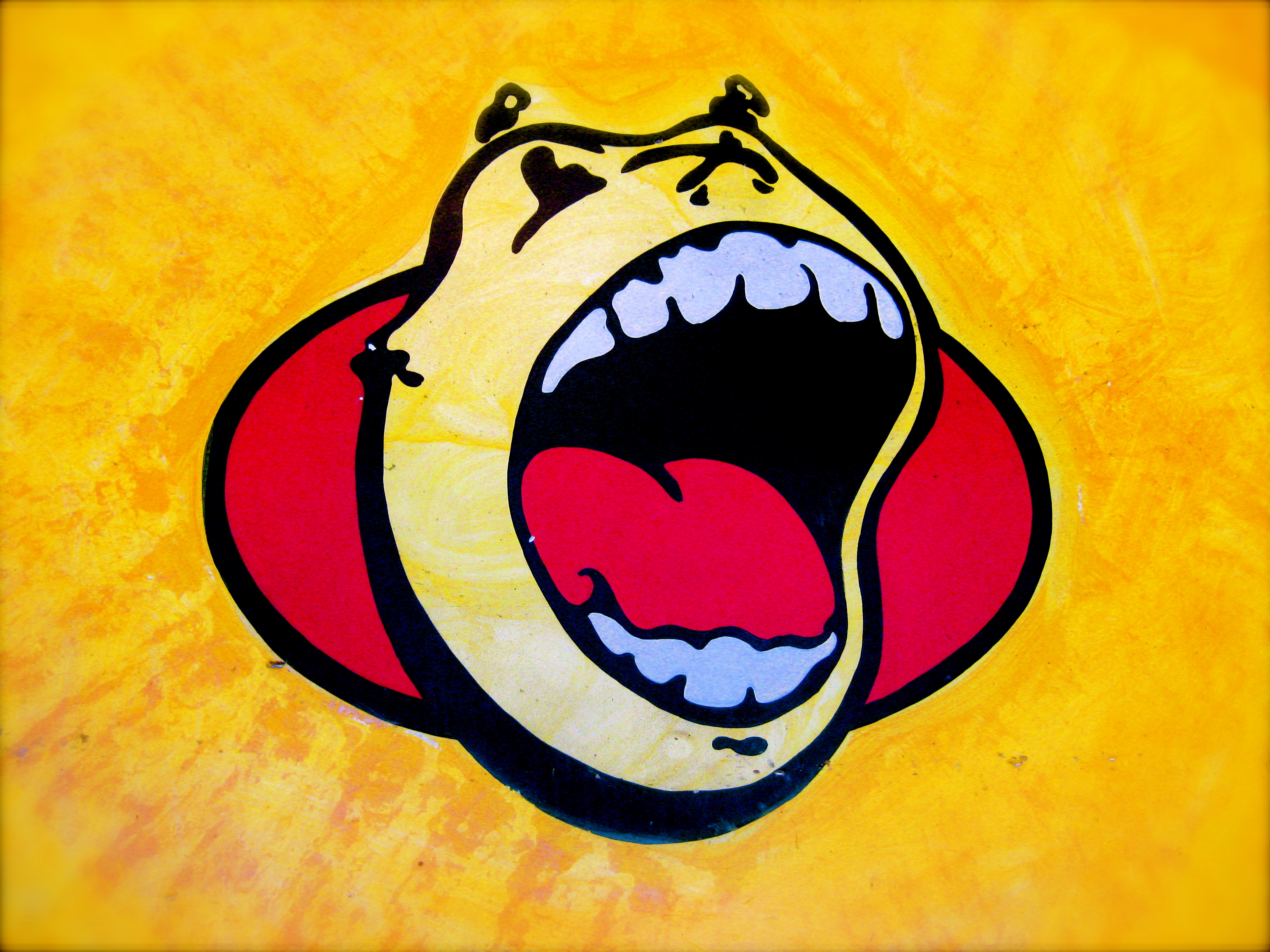 We are in the midst of much change happening both now and in the months to come. In just over a year’s time, our country will select a new President. Discussion and debate will commence about our economy. The tech boom will be brought up and while both sides will tout who did what to foster the job growth, a quiet audience will be watching and listening and wondering what will happen to them as they feel an economy that is literally pushing them out. Nature and capitalism have a lot in common – survival of the fittest, being generally cruel and what not. The same stark reality applies to the restaurant business and I wonder if Big Mouth Burgers, who despite a lengthy run not just in the Mission, but in the Bay Area at large, will still be around.

As I combed over many other burger contenders as I wrote this piece, I wondered if coming to Big Mouth was the right choice considering the venerable selection. Truth be told I came because I was staying blocks away. But as I started to peel away at the neighborhood, and the signs of things to come not just in the Mission but in the city as a whole, I realized that I was actually visiting what could be called “the Vanishing San Francisco”. This term has been applied in Manhattan for the very same reasons: gentrification is ushering in the new and, at times sadly, ushering out the old. Jaw dropping meals, both in spectacle, flavor and price lie in wait around many a corner in San Francisco. The city has the luxury of luxurious eating almost everywhere. But Bang for your Burger Buck, beyond being about burger bliss and being friendly on the bucks, is also about chasing experiences, of your past as much as your present. Big Mouth Burgers, when done simply, offers a burger of my youth at a price I would gladly return for time and time again. But the added bonus, a perhaps sobering reality, is that it is also a fleeting experience of what the city once was.

So get there soon.