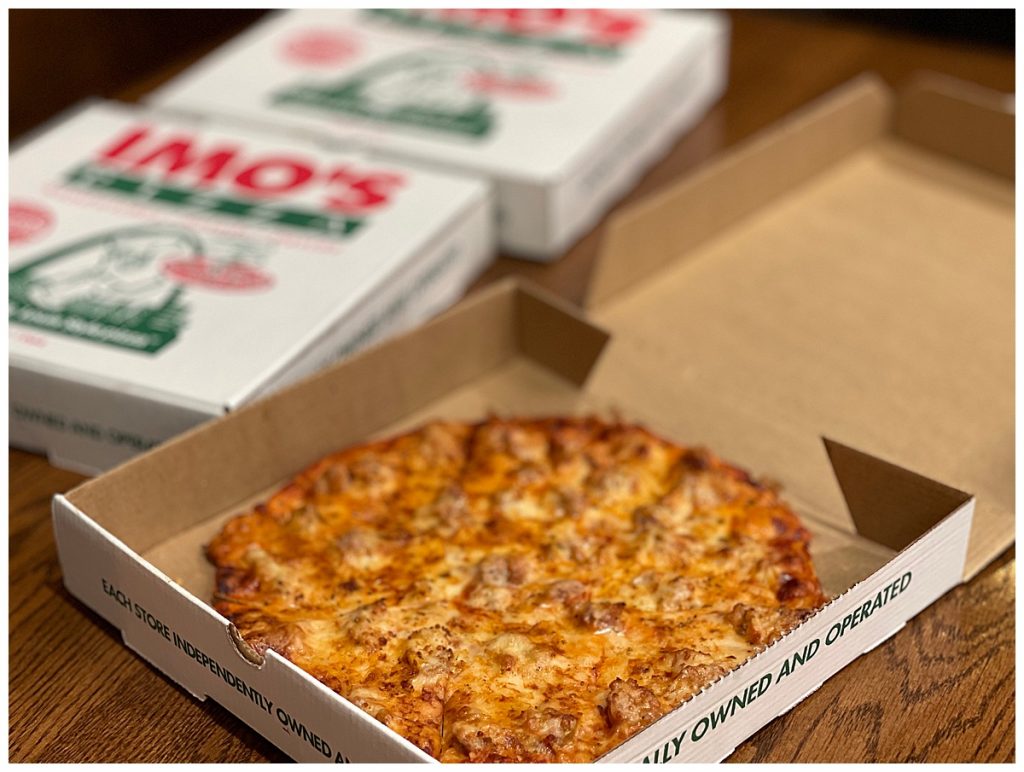 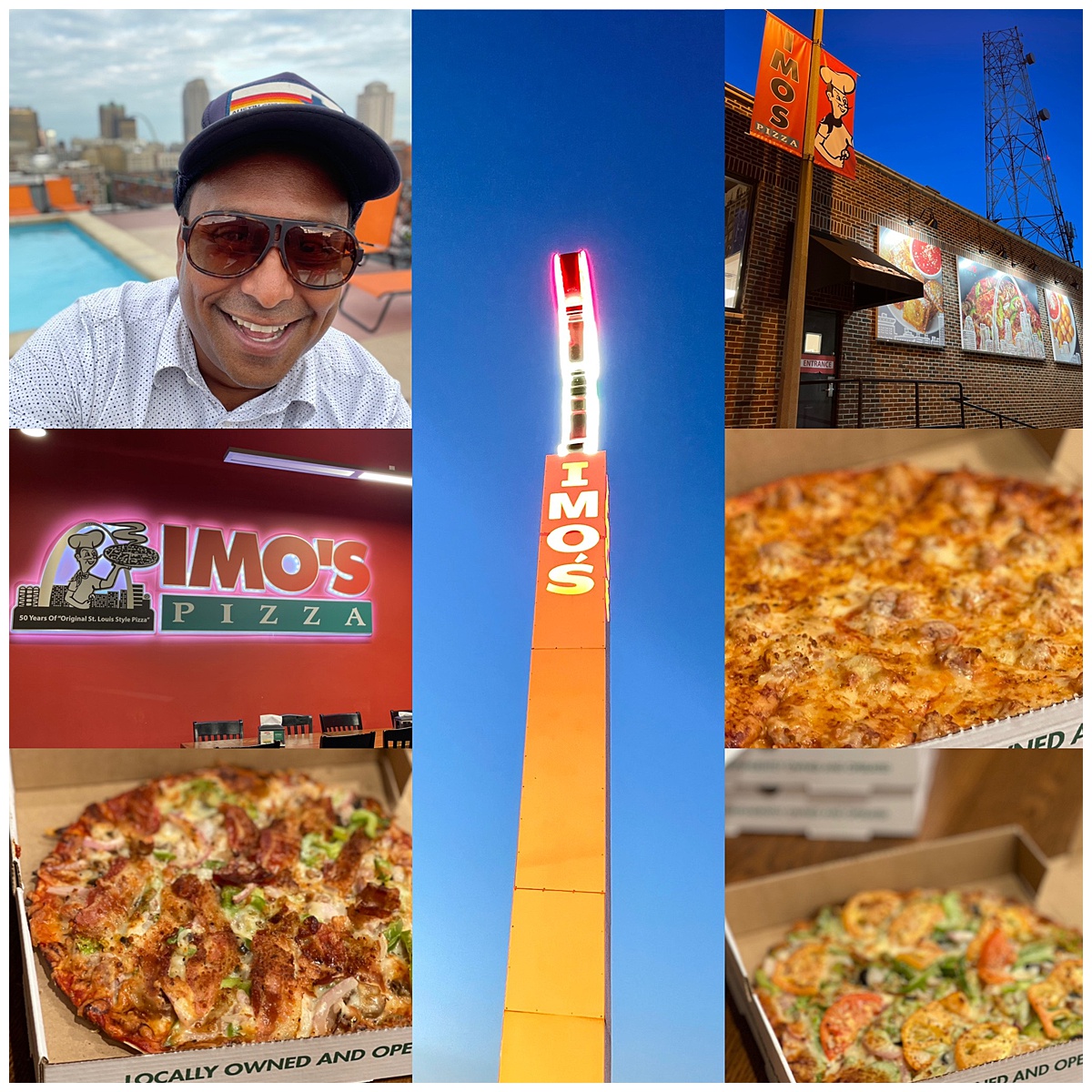 The Vitals:
the spot: Imo’s Pizza multiple locations in St. Louis
the eats: St. Louis style pizza
the bucks: $13 for a small single topping pie, $25 for a large with all the toppings
the full nelson: pizza abomination and beloved local institution

I love my hometown, I really do. Nostalgia rushes through my veins when I come back to St. Louis. There’s a charm about a Midwest blue collar city that endures in my soul. It’s more than the local landmarks too. Sure, it’s fun to see the Arch in your selfie and go to Busch Stadium and see the Cardinals regalia. What really makes St. Louis special is the Midwestern friendliness. Which even extends to a love affair with a pizza style, that simply put, just ain’t good.

Forgive me St. Louis but I don’t love your pizza anymore. 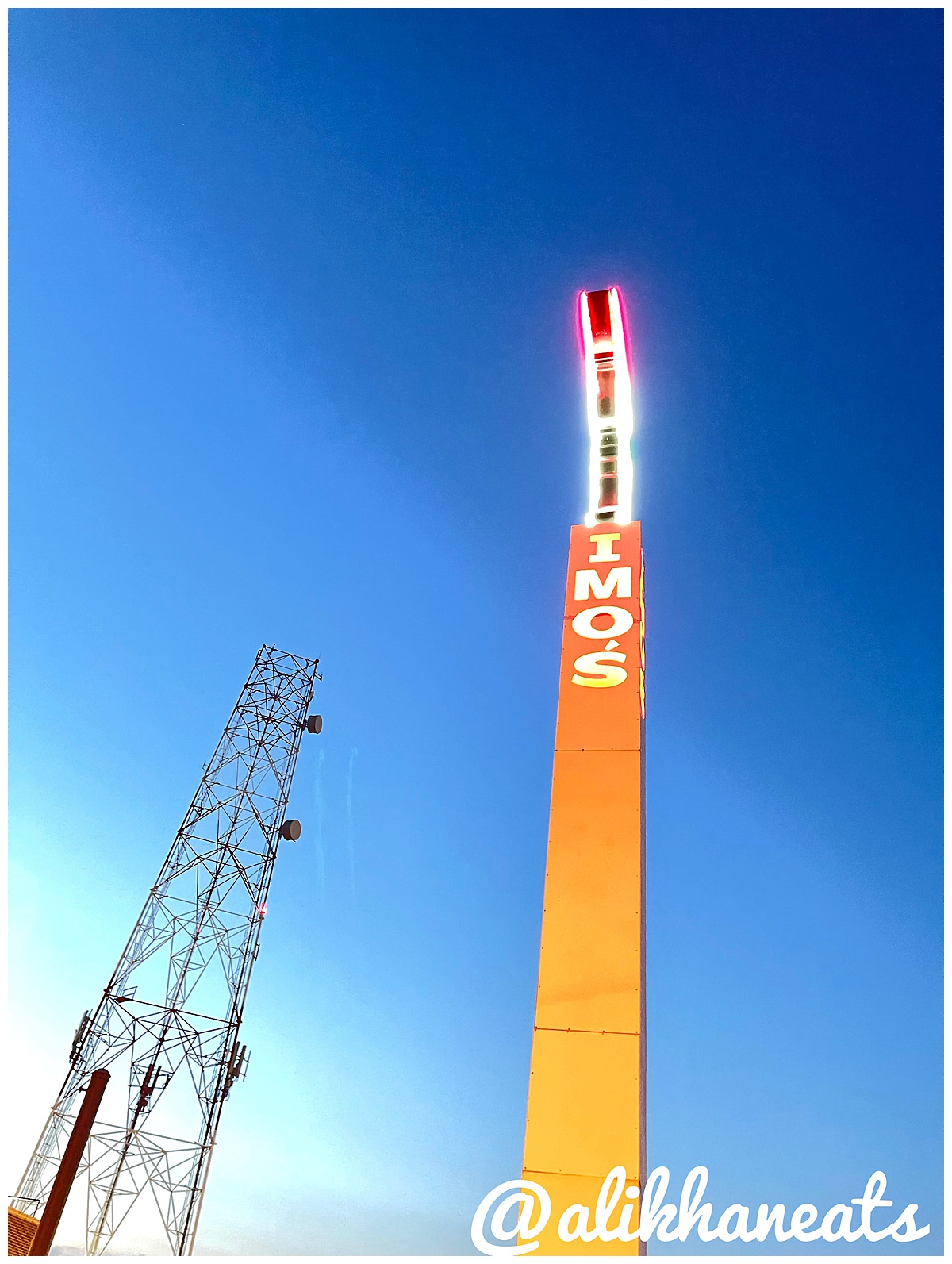 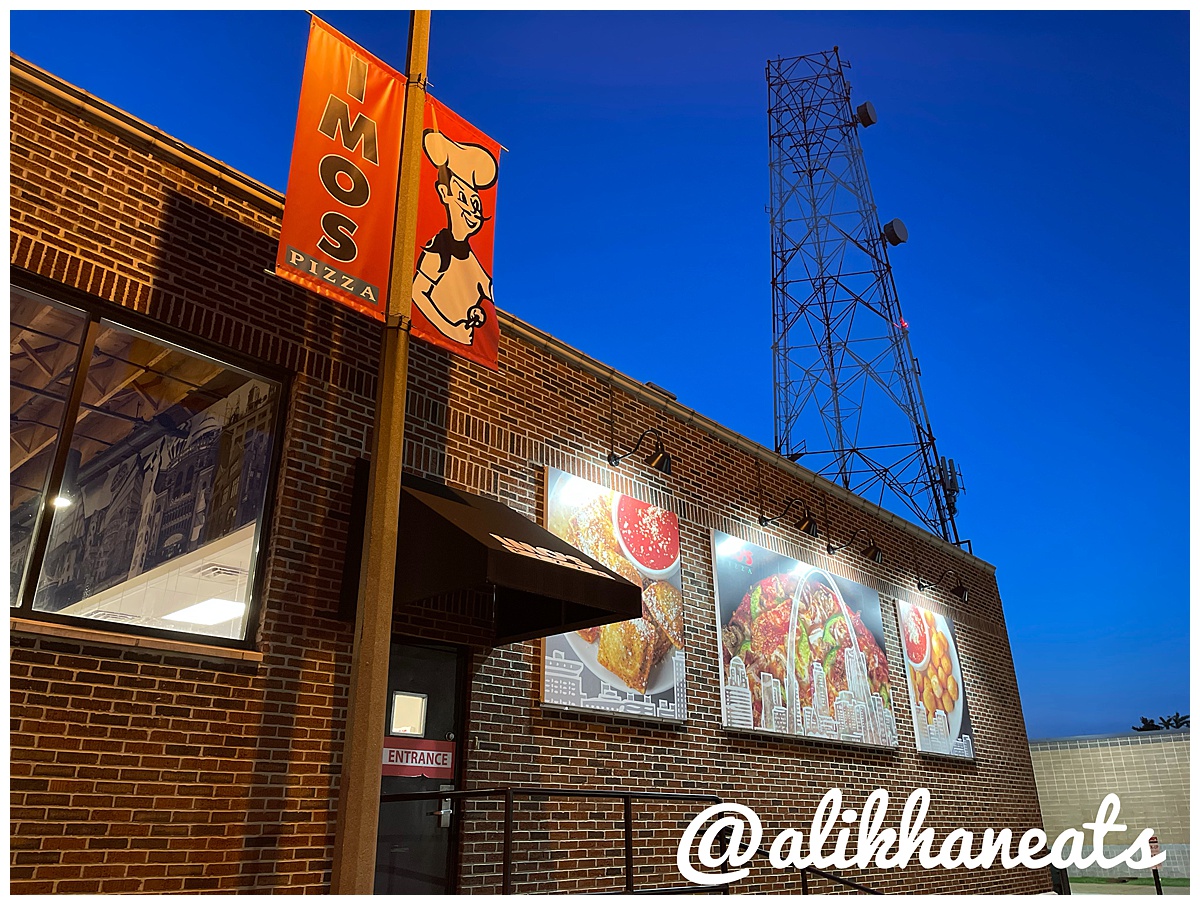 Imo’s Pizza is a St. Louis institution that has been going strong for nearly six decades. What started out as a little pizza joint in the Hill, a historic Italian American neighborhood, has grown into 100+ locations across three states. The promise of pizza delivered to your door in the early 1960s lead to Imo’s growth. In some ways it’s like how chains like Domino’s came to be: fast, convenient and consistent pizza; though Imo’s carries the allure of a local Mom ‘n Pop. 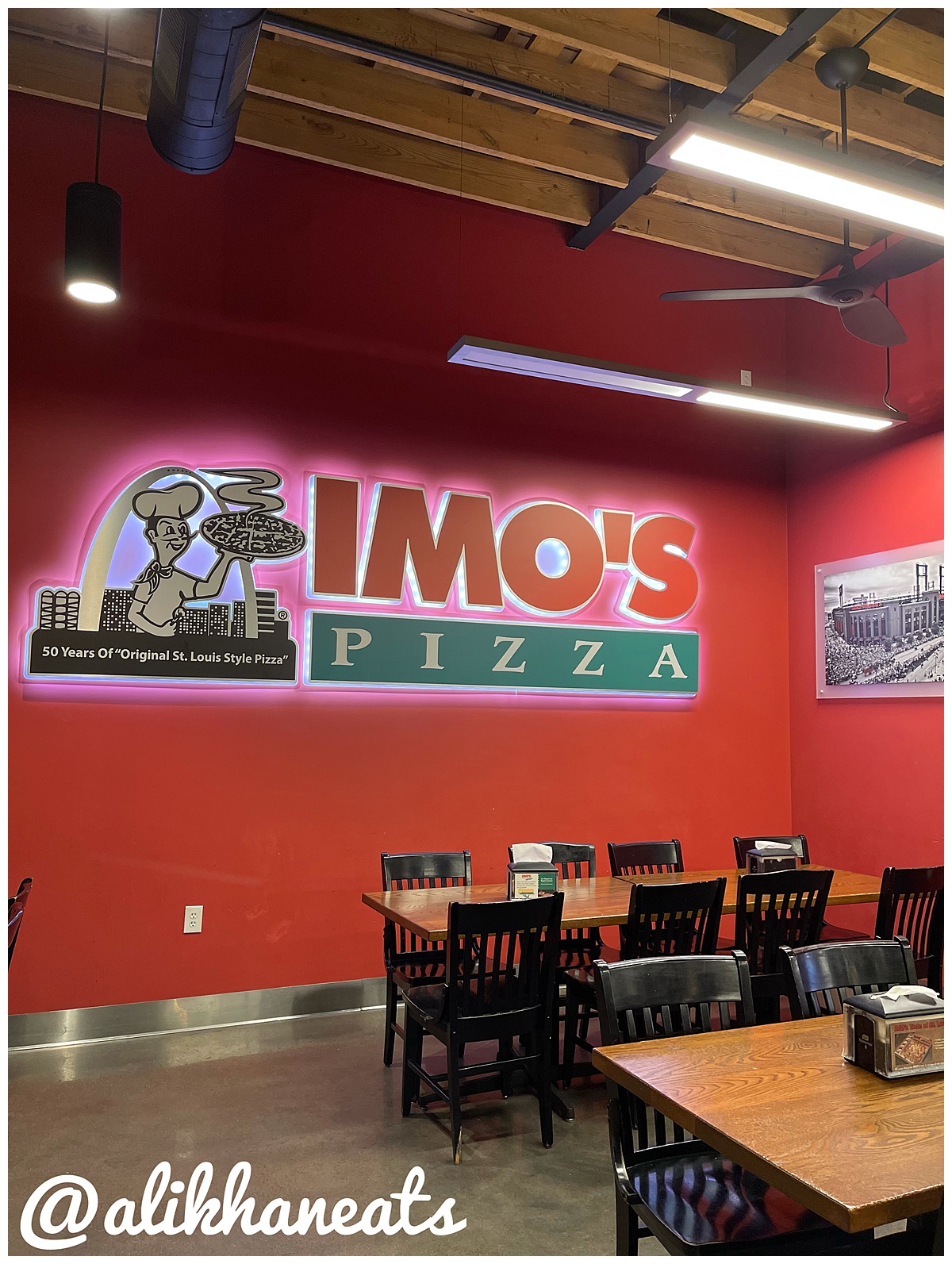 I was staying in downtown St. Louis a few weeks ago and had to make a stop to Imo’s. Apparently their main location was a stone’s throw from my Airbnb. My nostalgia was met with immediate modern day gratification. You can order online directly on their website. Within 45 minutes my Imo’s feast was about to begin. 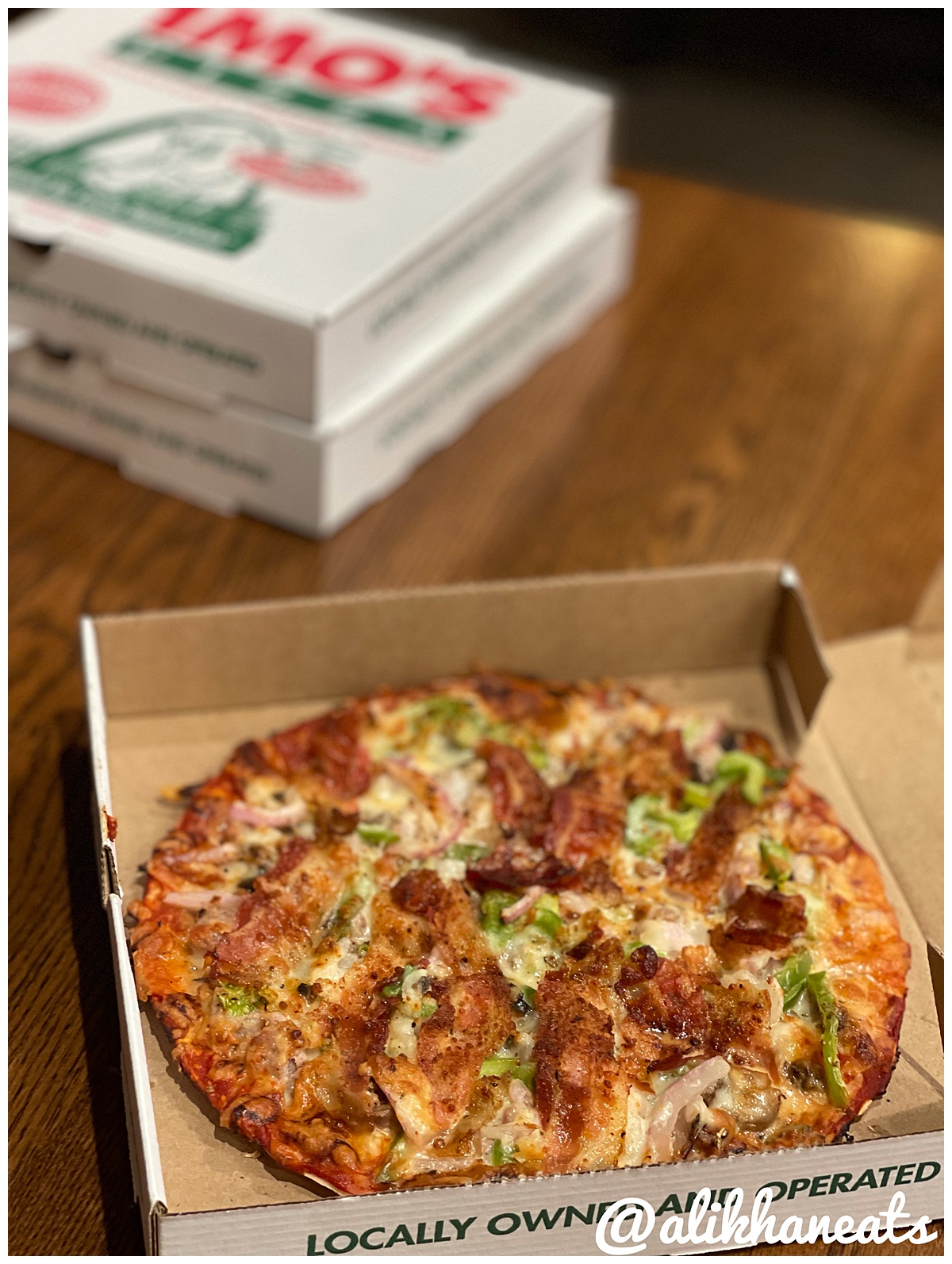 Growing up, I can’t say Imo’s was part of my family’s regular rotation. Trips to Imo’s happened more and more in the years after I moved away from St. Louis, when I would visit family and hit up Imo’s with old high school friends. And that’s how I discovered the deluxe. Sausage, green peppers, mushrooms, onions, bacon and provel cheese combine forces to say a big “FU” to your cardiologist or gym trainer. I don’t mind getting over the top every now and then if it’s worth it. Sadly, Imo’s isn’t.

At this point non St. Louis folks might be asking what Provel cheese is? According to Imo’s website + Wikipedia, Provel cheese is a combo of Provolone, cheddar and swiss along with some emulsifiers which allow it to melt very easily. A modern food marvel perhaps but it ain’t better than Mozzarella. In fact it’s decidedly worse. 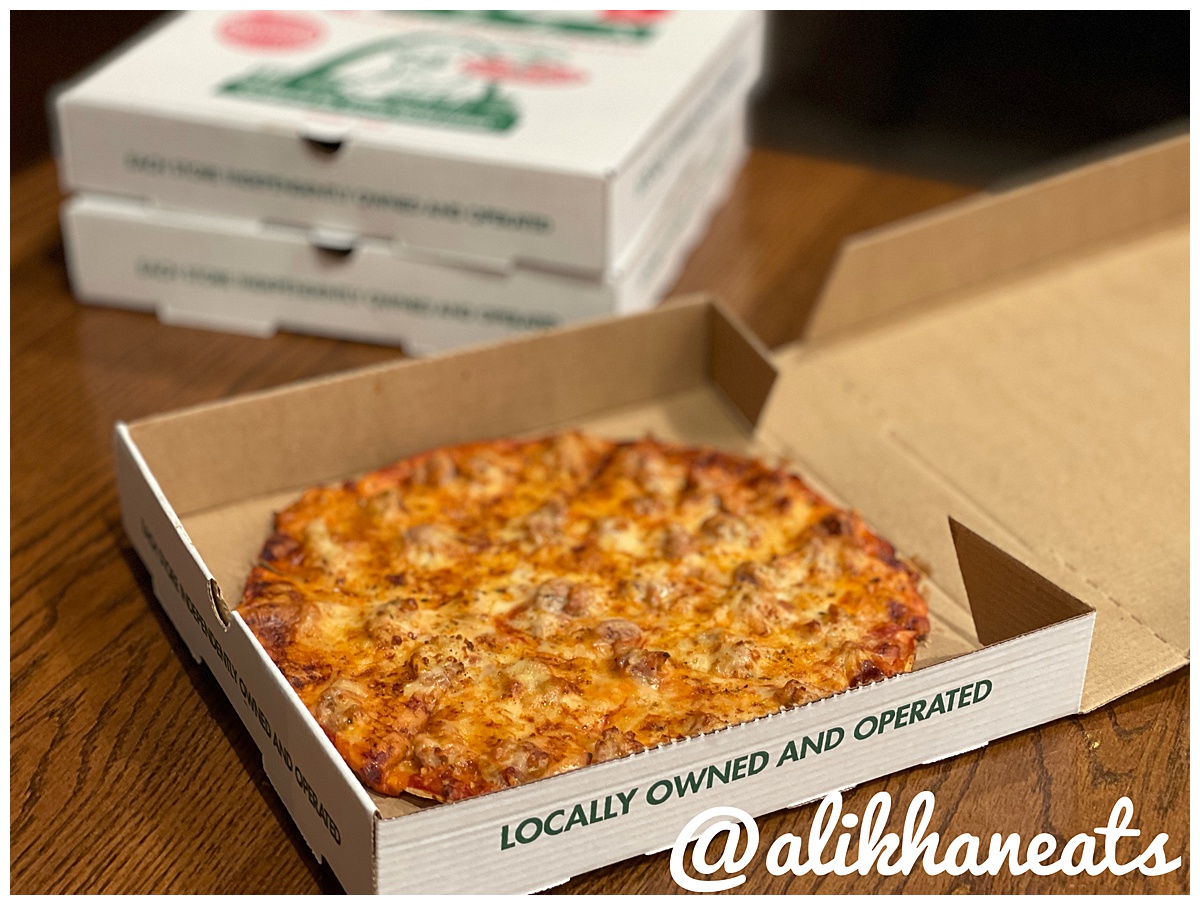 My kid opted for something pretty typical for a kid: single topping pizza and on this day he was feeling sausage. I love sausage on pizza when the seasonings, like fennel seed, really pop. This sausage makes Jimmy Dean taste like Andouille from New Orleans Gumbo Shack. I will say this was by far the best pizza of the bunch. Still, you’re stuck with that St. Louis cracker crust whose texture is closer to undercooked frozen pie crust. Oh, and provel doesn’t pack much of a flavor wallup. That plus the low melt point makes the cheese behave more like a white sauce. And a bland one at that. 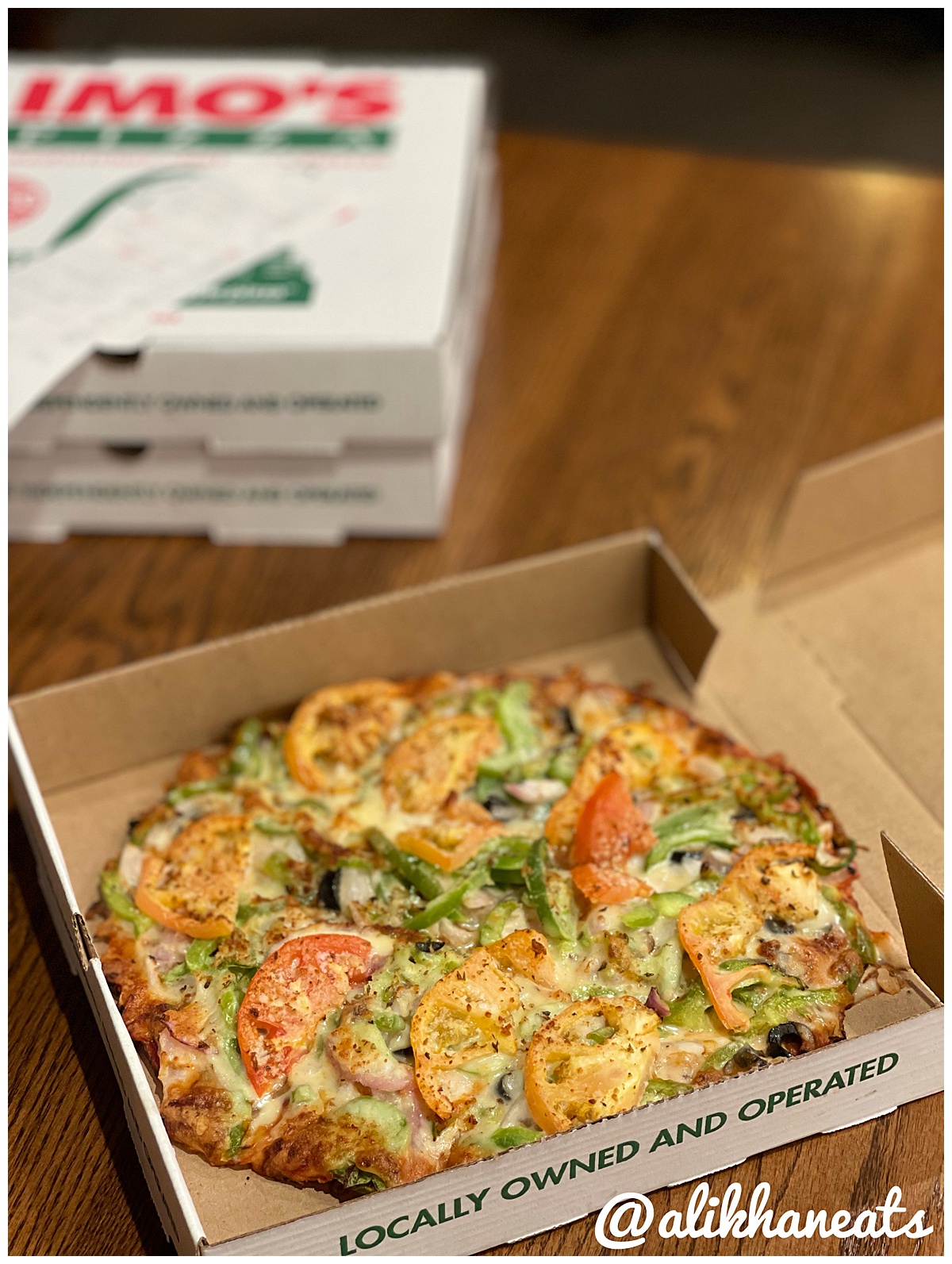 This could be the worst pizza I’ve ever eaten. Mushrooms, onions, green peppers, tomatoes, black olives and provel prove that throwing a salad bar at a pizza monster is a really really bad idea. The tomatoes must have leached out so much water that the ensuing pizza sog was to be deemed inedible by an inebriated Ali Khan. I’m not one to waste food, especially with a few beers in me, but a keg of IPA could not wet my whistle to eat this. Most of this was consumed by the trash can.

I still love you, Imo’s.

Imo’s pizza is not very good pizza. Nor is St. Louis style pizza, a very good pizza style. And while I’m at it I could throw Chicago deep dish in there too plus the BBQ chicken pizzas from California Pizza Kitchen I ate in the 1990s. The point is bad pizza is out there and people love it anyways.

Lately I have been on a pizza Renaissance tour with Neapolitan pies popping up along with some more frequent trips to NYC and East Coast. When I think about the sausage pie we featured in Cheap Eats New Haven, I think any St. Louisian who tried that would throw their arms in the air and say “That is real pizza!” And it’s nothing too elegant or foreign. That’s “watching football on the couch” pizza as Dave Portnoy would put it.

Ultimately none of that matters. For a place like St. Louis, that’s maybe seen more that it’s fair share bad days than good, I’ll let the people rejoice in what they take pride in. It’s their thing and it has stuck around.

This last Imo’s run has let me look at Whataburger with fresh eyes. Since I moved to Texas, the love affair for Whataburger has truly escaped me. Especially because it comes with an In-N-Out bashing. Whataburger is decidedly inferior to In-N-Out which is more a reflection of Whataburger’s ho-hum fast food burger quality than In-N-Out being some sort of shining burger joint on the hill. But Whataburger, like Imo’s, is a beloved local joint, it has stuck around and that counts for something. Even when the food doesn’t.

I’d bookmark Imo’s as a true St. Louis eatery that’s worth of a visit. I just won’t eat there. 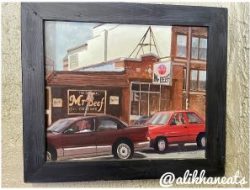 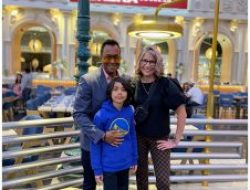 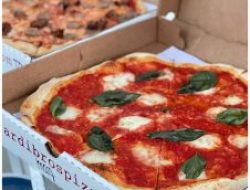