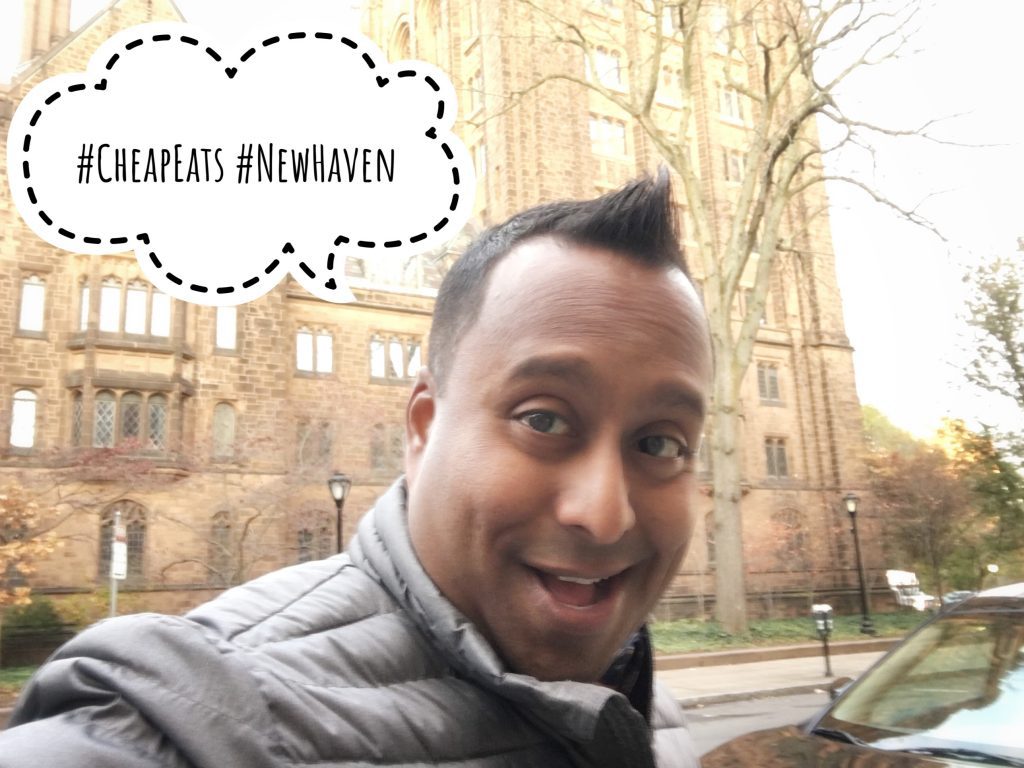 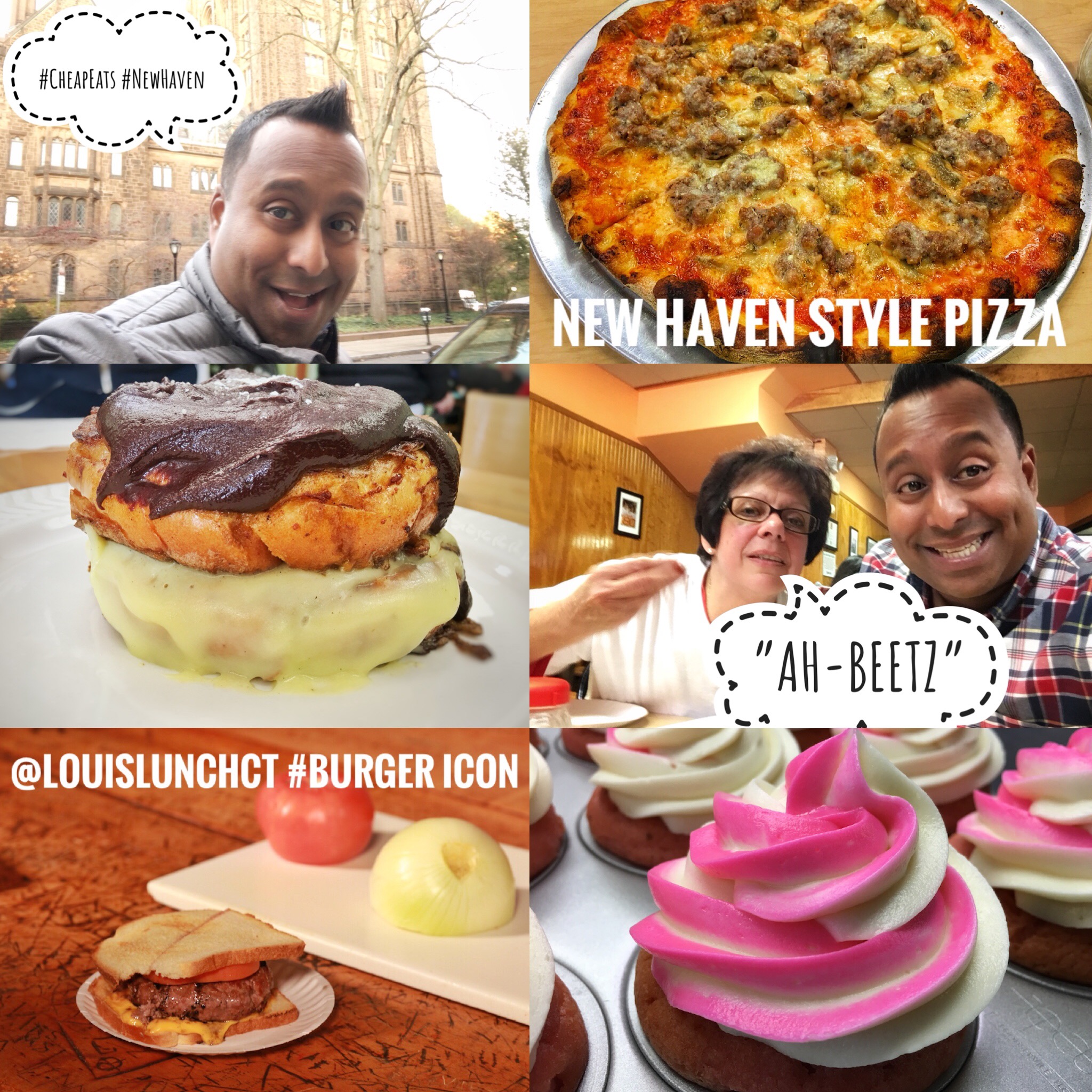 Home to the most OG burger spot in the world and sporting a pizza style that makes New Yorkers swoon, I would move to New Haven out of foodie principles if I could handle the cold and had the GPA to live that close to Yale University. But since it makes for a the perfect pit stop in between NYC and Boston, I know I will be back. And pizza is just the tip of the Cheap Eats iceberg. So with that let’s take a big second bite of Cheap Eats New Haven! 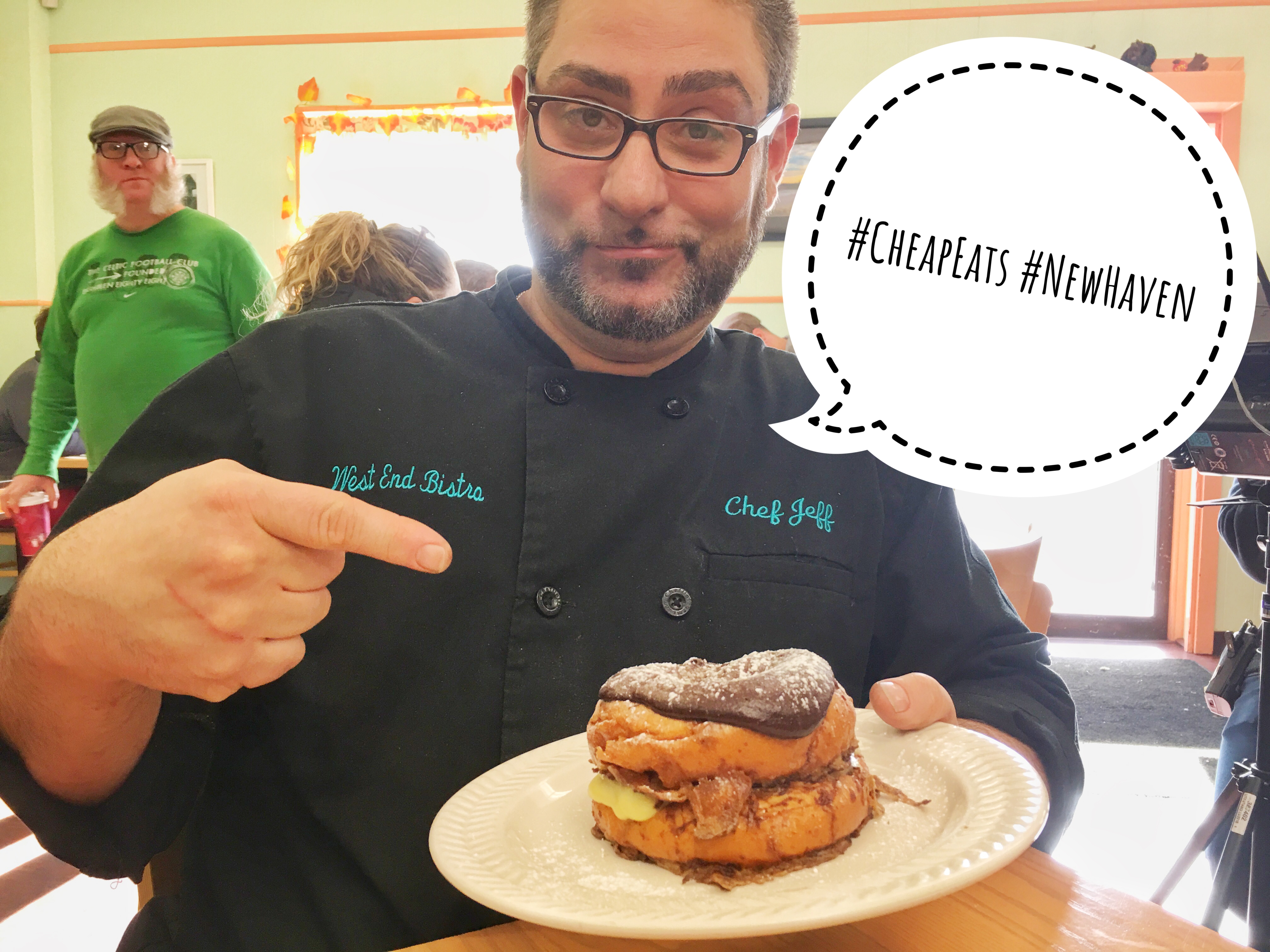 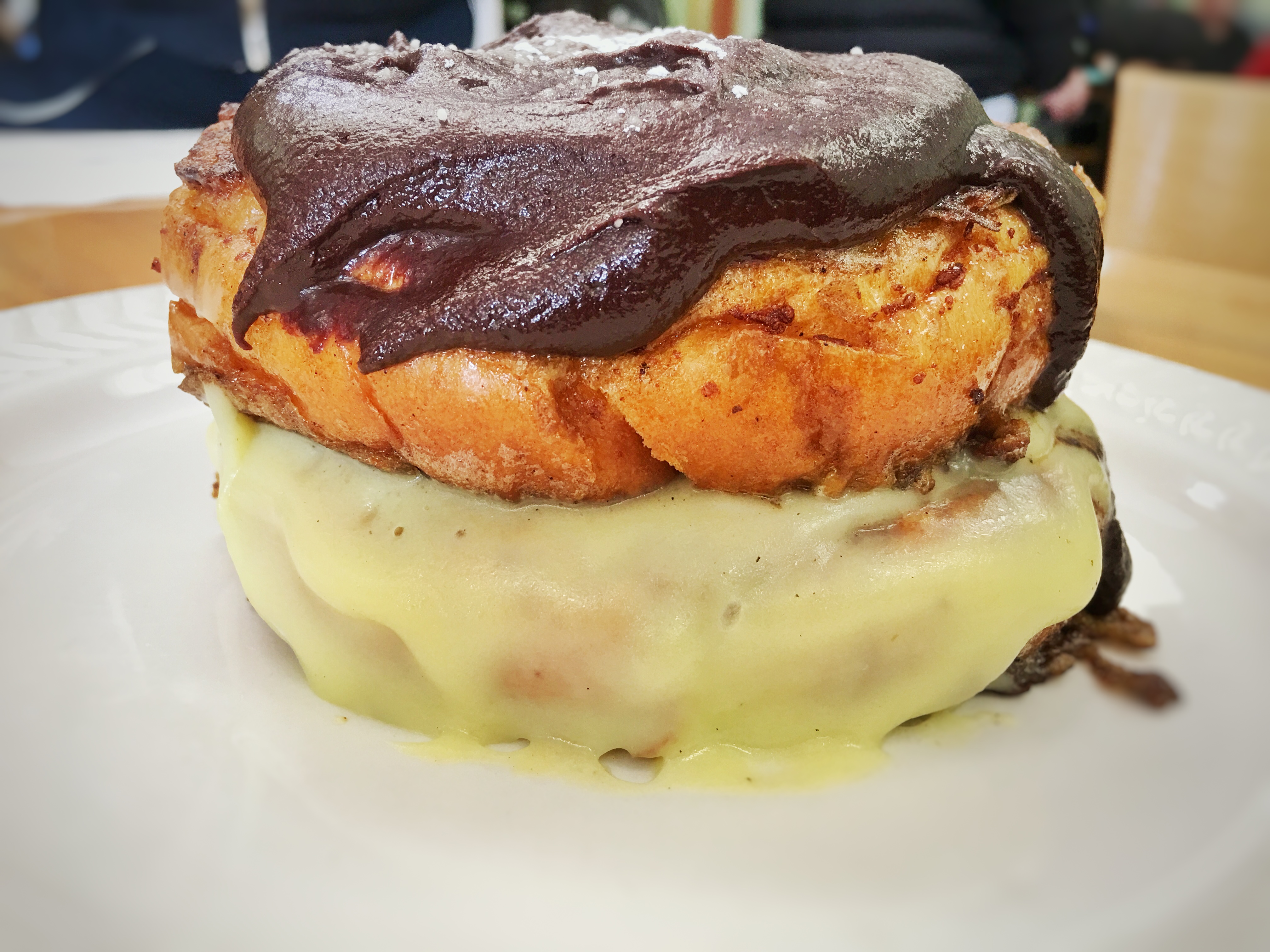 If you watch enough episodes of Diners, Drive Ins and Dives you start to see a pattern of unpretentious restaurants taking on technique and ingredients that once were to be found almost exclusively in fine dining establishments, building their menus and reputations around it. The button phrase that would pop out of the chef’s mouth would pretty much sound something to the tune of “we are just doing it right“; taking the extra step, not cutting corners, challenging both the soul of the kitchen and the palates of the peeps in the dining room. West End Bistro pretty much squarely falls into that category with locally sourced eggs, truffle laced cheese and grass fed beef. Cheap Eats New Haven started off the breakfast round with a sweet tooth and the move was made to go for the Boston Cream French Toast: a brioche bun cut in half, stuffed with a Boston Cream Pie filling and topped with chocolate ganache. And Chef Jeff Lambreti spares no expense because he uses imported chocolate from Belgium. He is also a freaking riot on top of being a chef who is stepping it up for breakfast, lunch and dinner at solid Cheap Eats prices. Oh and he also loves Instagram almost as much as I do . . . that’s my kinda chef. 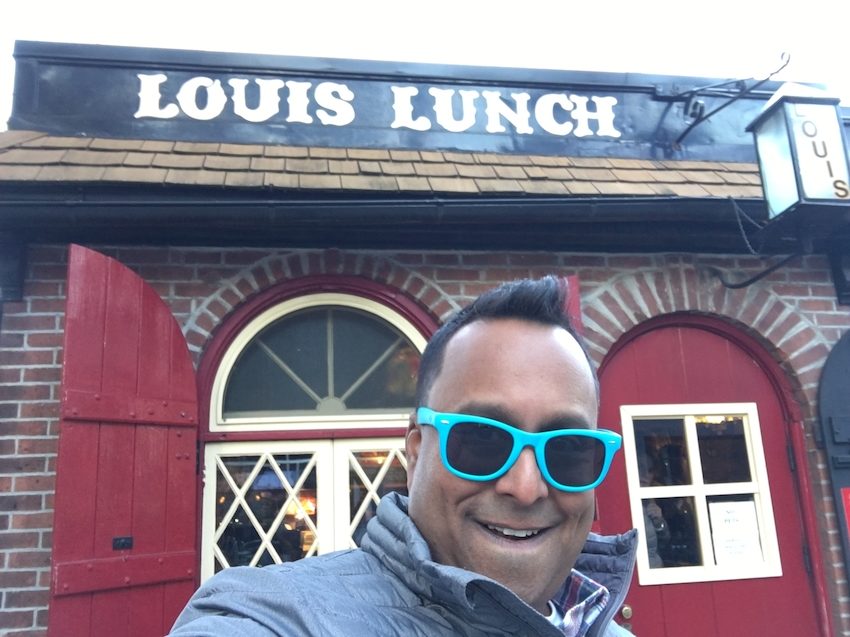 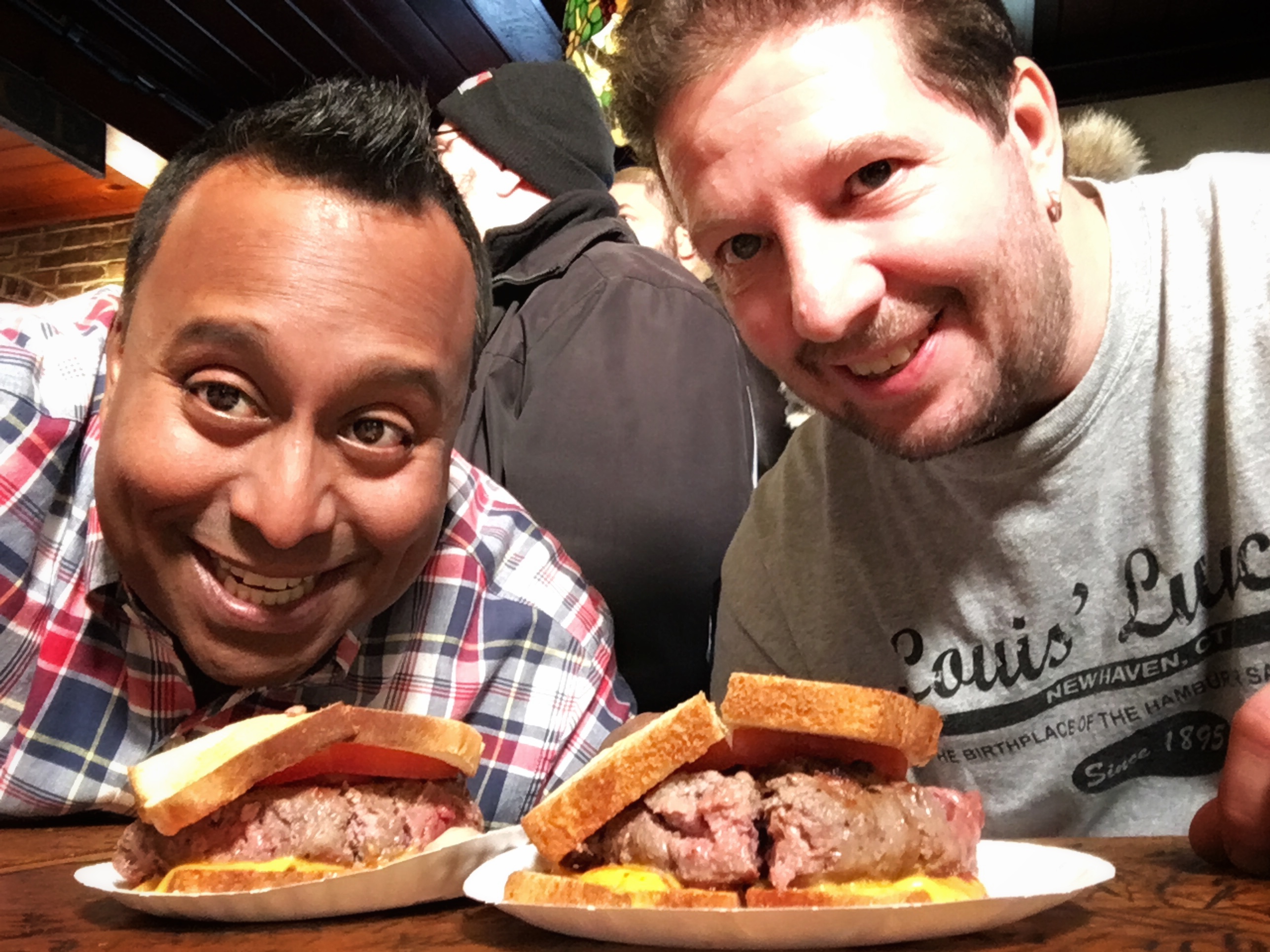 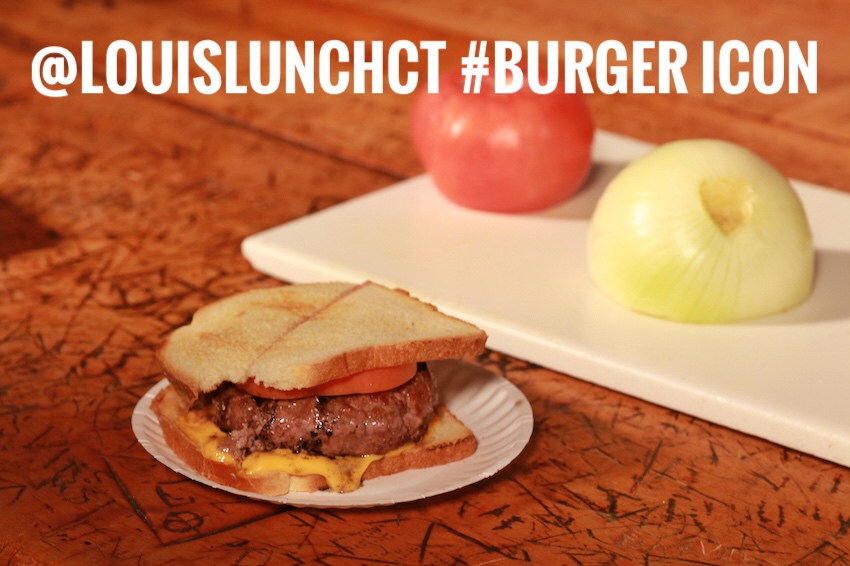 The Vitals:
the spot: Louis Lunch 269 Crown St Haven CT 06511
the eats: The Original Burger
the bucks: $6.25
the full nelson: the burger that started it all

Way back when, Bang for your Burger Buck was a blog looking for burger bliss while navigating a new burger world filled with trendy burgers, concept chains and countless other distractions trying to part your hard earned bucks for a burger that was worth it. Back then I would have said that a burger cooked to temp for $8 or less was worth checking out. And if a place really delivers for that price you best believe I would drop the holy words “bang for your burger buck”. Well it is 2018 folks, and Louis Lunch, the place where the hamburger was invented, that has been in business since 1886, and has been featured on numerous television programs(like Cheap Eats New Haven) is serving a burger, with cheese, for $6.25. Served on white toast with only tomato and onion plus cheddar and a beef patty made from a secret house blend of five different cuts, the point of this burger is the beef and the beef is on point. Of course cooking a burger to medium rare is just the right thing to do, but don’t overlook Louis Lunch’s signature vertical broilers and the fact that the onions cook along with the burger patty in those signature broilers. Recently I have been rocking an incredible marinade from the Zahav cookbook that features onions as the base. Make no mistake that the onion, the truffle of the poor, as some have come to know it, flavors meat as well as black pepper. This burger is simple, vintage and as legit as the sight of owner Jeff Lassen cooking  burgers behind the same counter his great grandfather did. This is living history people, its edible and it most certainly is Bang for your Burger Buck. 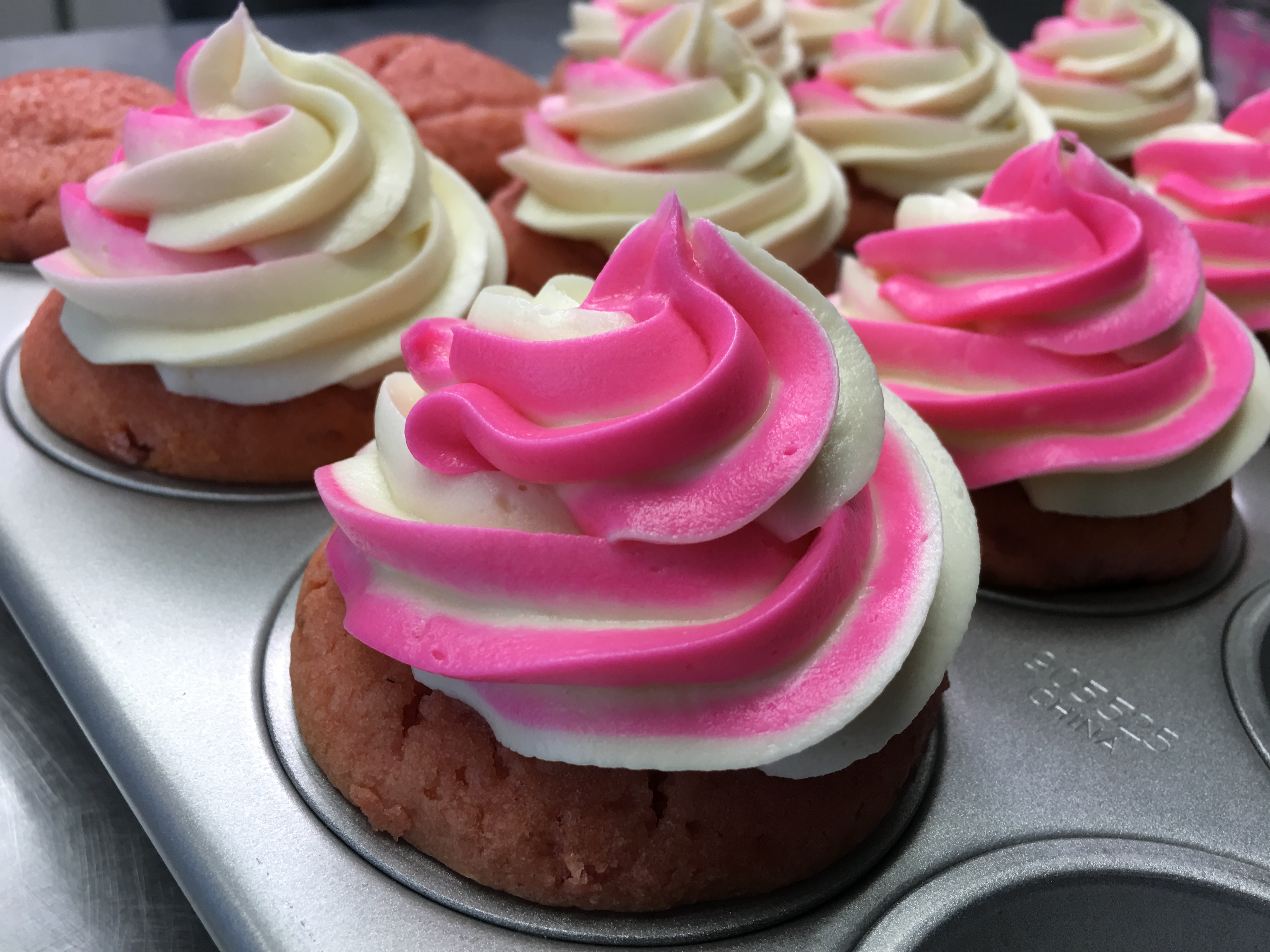 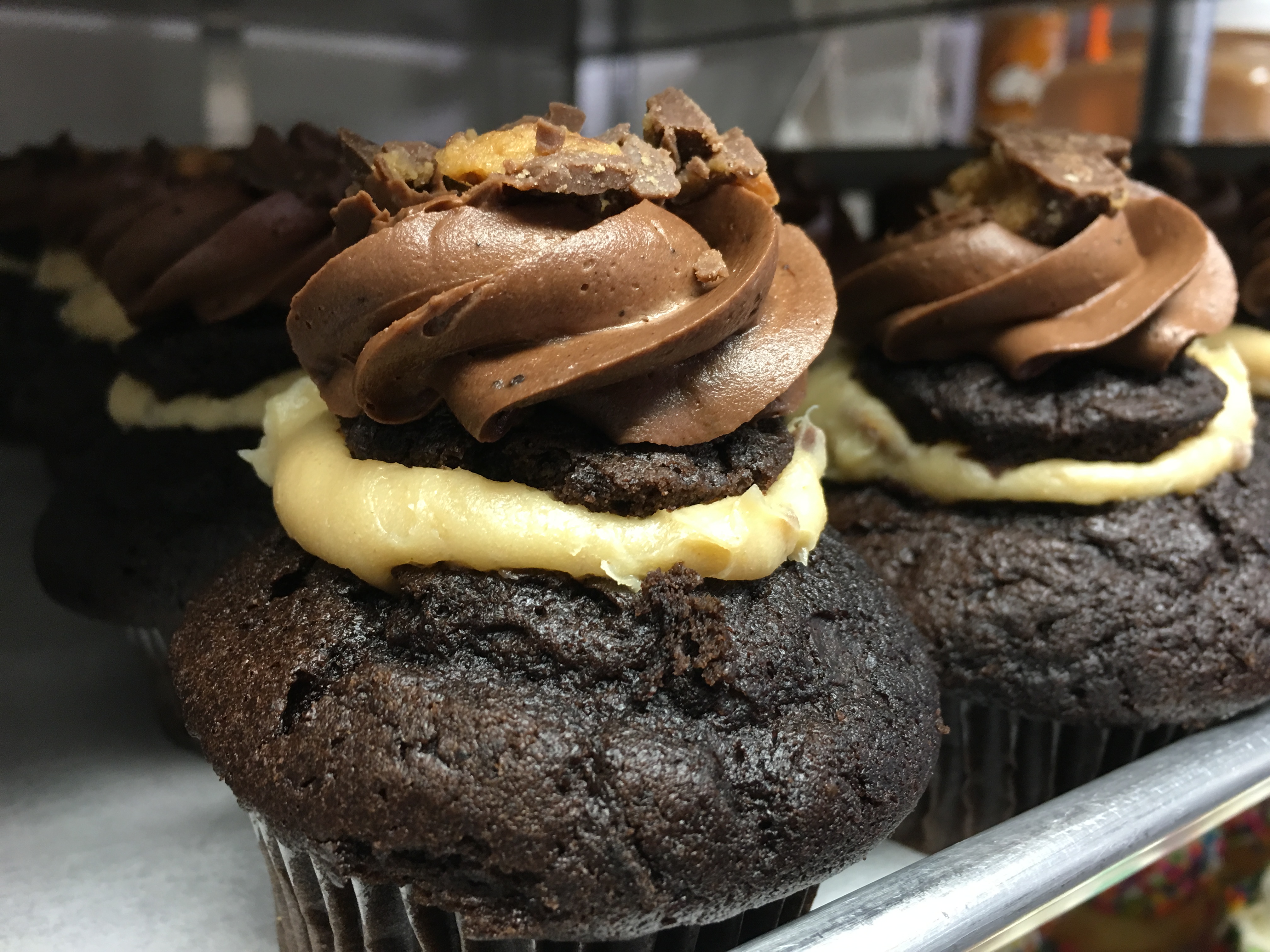 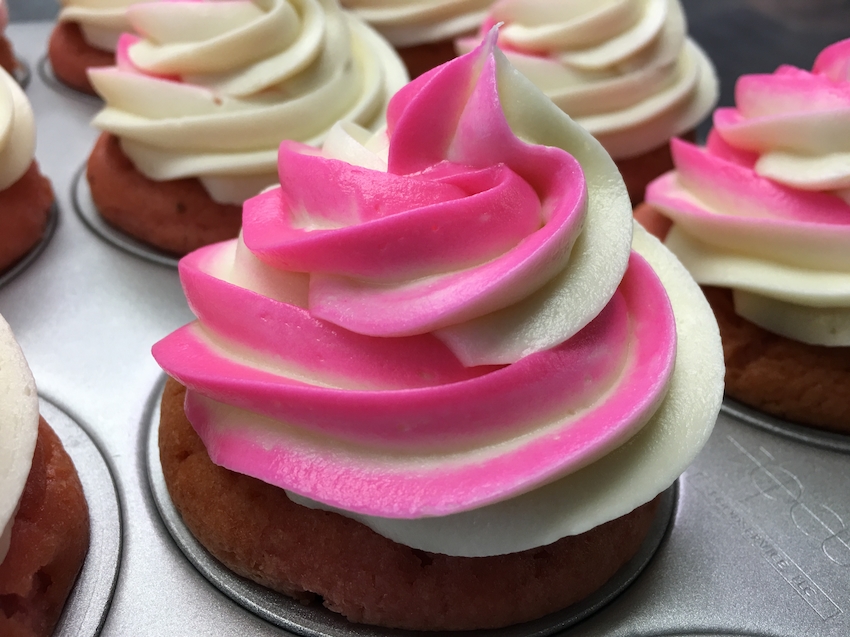 Cupcakes might be trending but they are most certainly here to stay. Which makes Sugar Bakery and Sweet Shop a 21st Century New Haven institution. And they freakin won Cupcake Wars . . . game on. What started out in a garage by a mother and daughter baking duo back in 2004 has grown into 4500 square foot cranking out like 1000-2000 cupcakes a day. But I ain’t here to find the next Hostess factory . . .  I’m here for some Bang for my Cupcake Buck. Meet the Strawberry Cheesecake cupcake, with a cake base that features fresh puréed strawberries and a cream cheese buttercream. Now when $5 cupcakes came on the scene, I feel like we the public came to an understanding that cupcakes first and foremost should have moist cake. I still believe in this statement but if there is one thing I have learned in this last season of shooting Cheap Eats is that it is all about the buttercream frosting. Now standard issue frosting can sometimes use cream cheese(or in lesser bakeries: shortening) but at Sugar Bakery they use butter and cream cheese along with the requisite powdered sugar.  Cream cheese is basically THE flavor profile of cheesecake and is exactly how Cupcake Wars champ Brenda De Ponte pulls off cheesecake in cupcake form, and for $3.50 no less. But would you expect any less from the baker that one Cupcake Wars? Exactly. 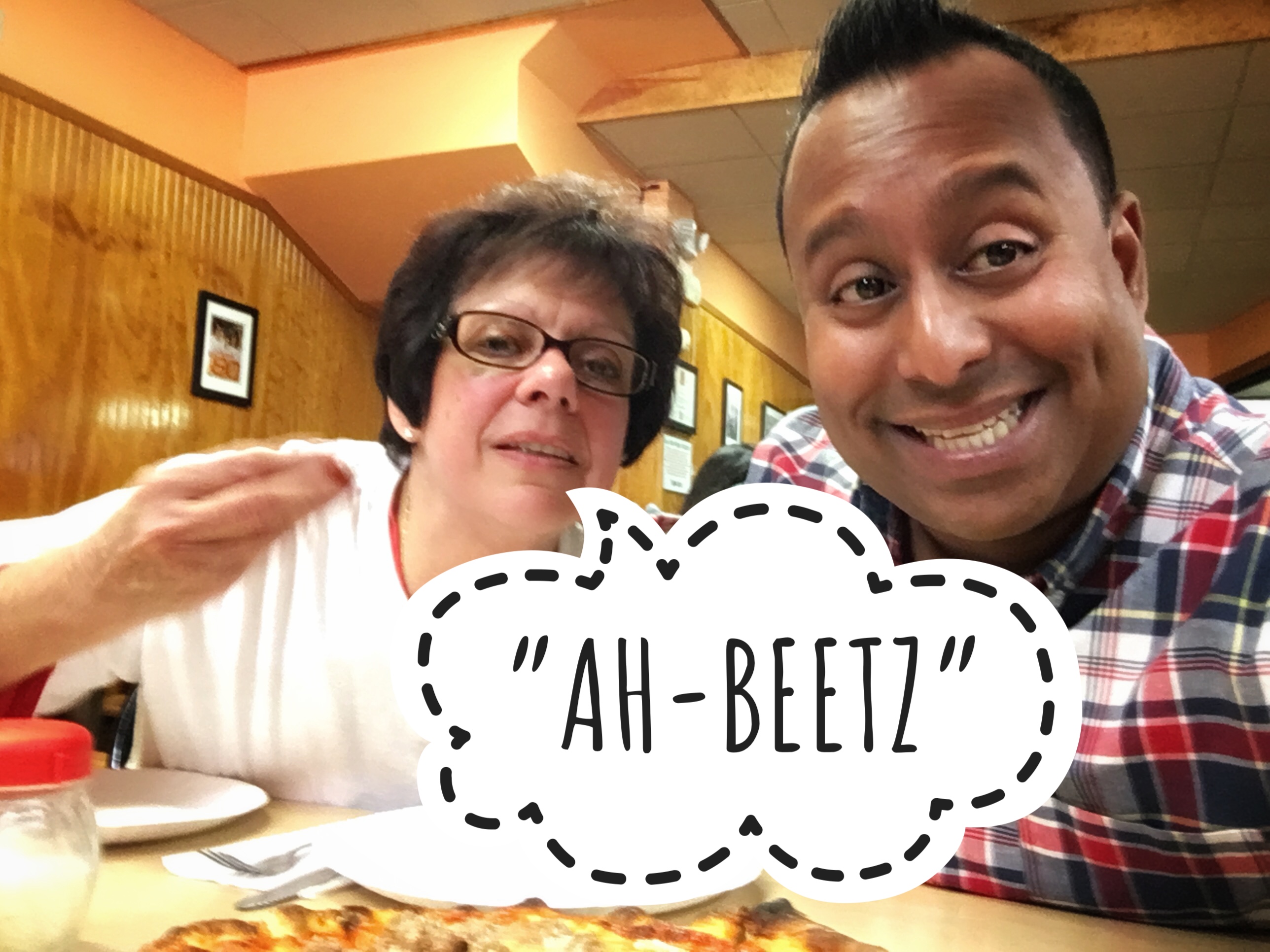 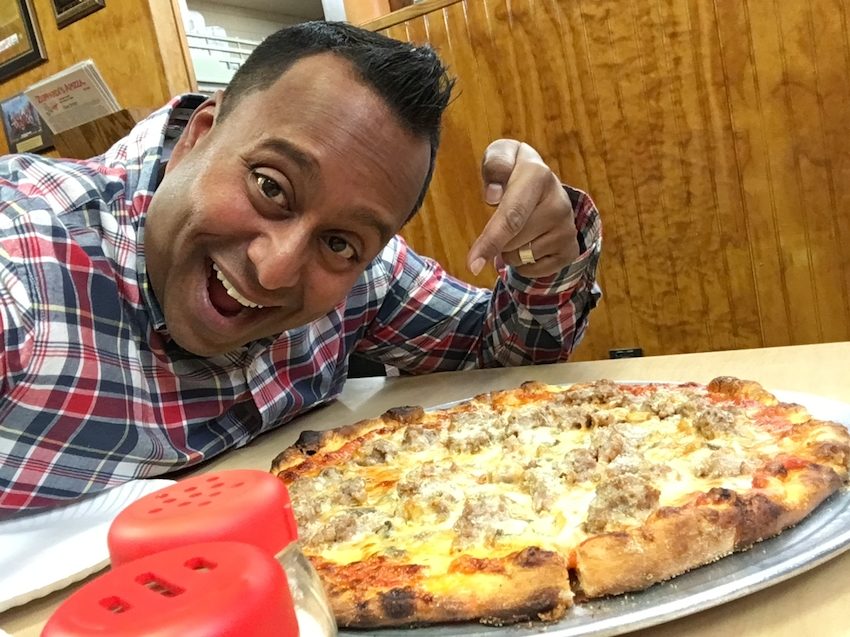 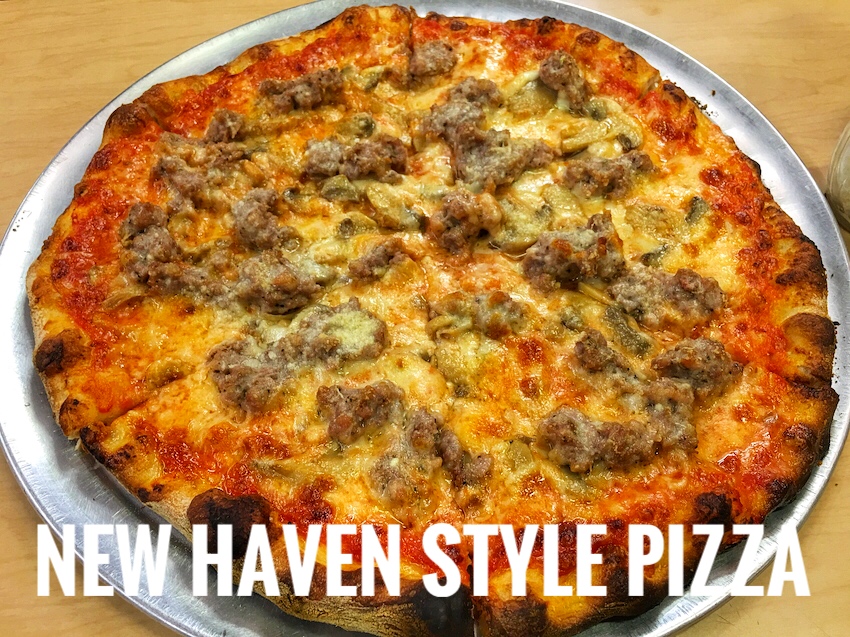 The Vitals:
the spot: Zuppardi’s Apizza 179 Union Ave West Haven CT 06516
the eats: The Special a red sauce pizza topped with mozzarella, mushrooms and house made fennel sausage
the bucks: $11.25
the full nelson: my favorite pizza style ever with my favorite topping ever

Pizza is pretty darn subjective which means I should be upfront with my own personal pizza subjectiveness. I grew up in St Louis, loving all things meat and thin crust pizzas. Neapolitan style Margherita pizzas may well be exquisite but will never be my favorite. I also think fennel and pork is a magical pairing. And if you catch me nibbling on pizza crust or relishing on that last  noodle of pappardelle, then chances are I am feasting on some carbs that somehow manage to melt my meat centric heart. Zuppardi’s Apizza covers all these bases, challenged my previously held belief in the superiority of Midwest thin crust pizzas and allowed me to come to the realization that the crust is as important as the toppings. Now part of the conversation when getting pizza, or should I say “Apizza” in New Haven is getting the clam pie. I have had it. And it indeed is amazing. It also sells at market price so if you’re on a budget, the move is to get the Special: a red sauce pie with house made fennel sausage, mozzarella aka mootz, and mushrooms. Two things stand out as I recall this pie: the chunks of juicy fennel spiked sausage that were perfectly cooked because they go onto the pie raw and get cooked along with that perfectly charred chewy crust. Neapolitan pies are known for their char, something New Haven pies aspire towards. It is more subtle but that slight burnt aroma is there. Now the chew of the crust . . . it is truly unmistakable. Like eating Central Texas barbecue in Austin, eating pizza in New Haven is an experience one must do at least once in there life. The greatness of New Haven style pizza is not limited to Zupparadi’s but for me, going there and meeting Cheryl and Lori Zupardi, who represent the third generation of Zuppardi’s making Apizza in New Haven makes Zuppardi’s an instant Cheap Eats classic. Worth the flight to New Haven, I can tell you that. 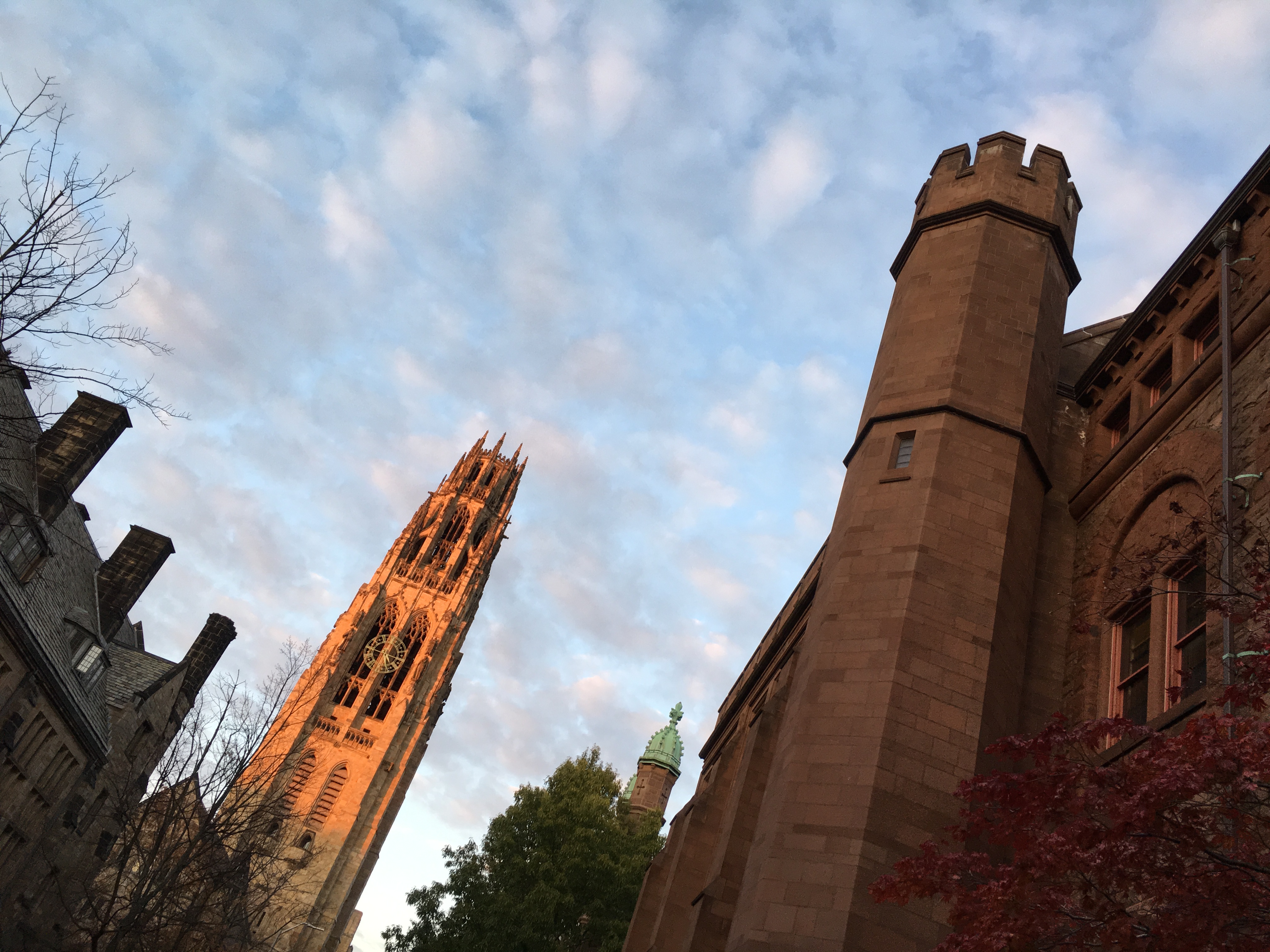 And that was Cheap Eats in New Haven! The home to Yale University is also also a Cheap Eats haven, New Haven is. See what I did there? Jokes aside I’ll be honest with you: I took a peak at the cost of sending a kid to Yale because I have 6 year old . . . it costs $300,000. So take this Cheap Eats list to heart future parents of Ivy League students . . . cuz you’re gonna be trying to save every penny you can. And when it comes to Cheap Eats in New Haven, you really don’t have any excuses!