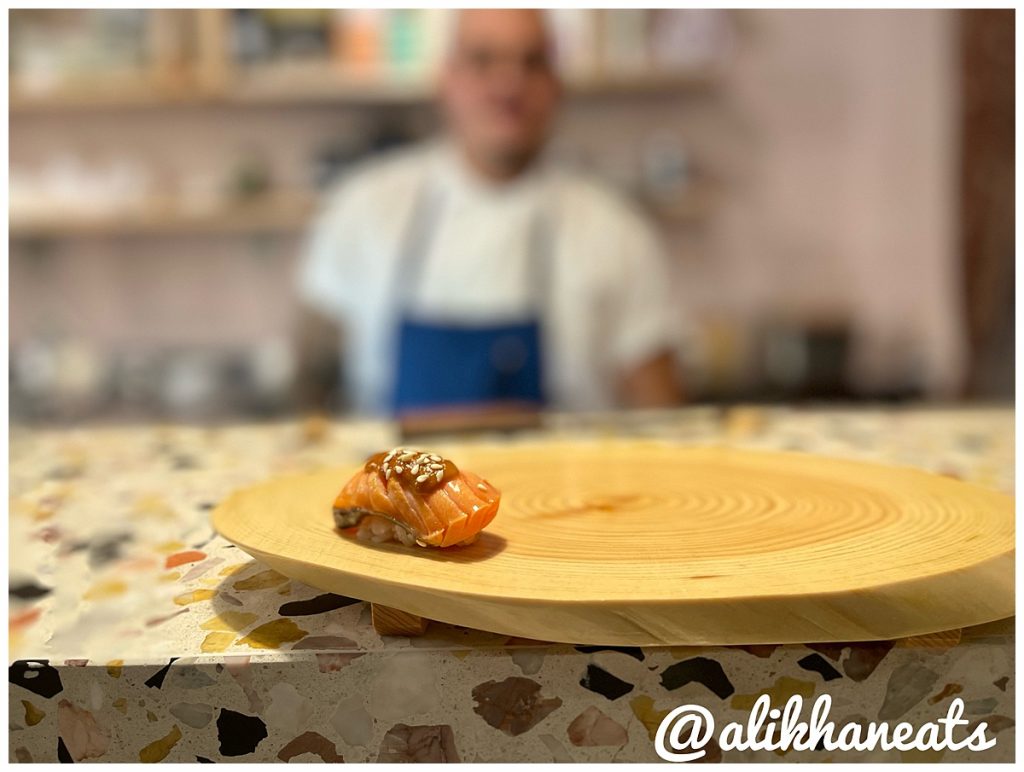 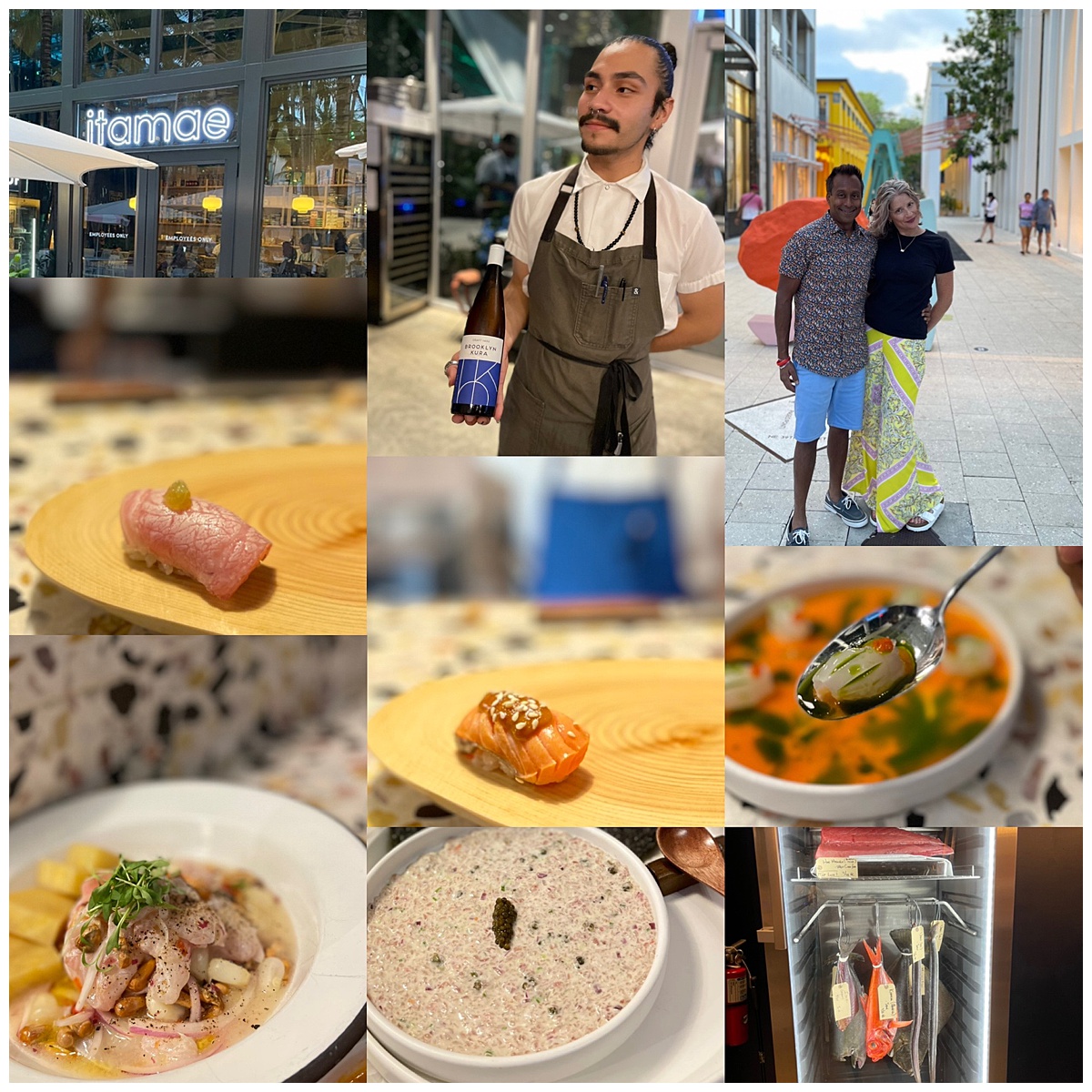 The Vitals:
the spot: Itamae 140 NE 39th St. Miami FL 33137
the eats: Chef’s tasting menu
the bucks: $$$$
the full nelson: The best sushi I have EVER had and technically it wasn’t even sushi

Itamae in Miami may well be the best sushi experience I will have this year and technically it isn’t exactly a sushi restaurant. Itamae is a Nikkei restaurant which refers to generations of Migrants in Peru who arrived from Japan for fishing and stayed, bringing their culinary traditions to a new country. Like the mixing of Tex and Mex, a new cuisine was born that would define Peru the same way chips and queso define Texas.

The most notable chef to come from this culinary evolution is rockstar celebrity chef Nobu Matsuhisa. His high end chain of restaurants translate to a trusted name in high end sushi. Nobu is technically from Peru, though he is of Japanese ancestry. Itamae, like Nobu’s restaurants, comes with a price tag but it is worth it. Here was my course by course experience. 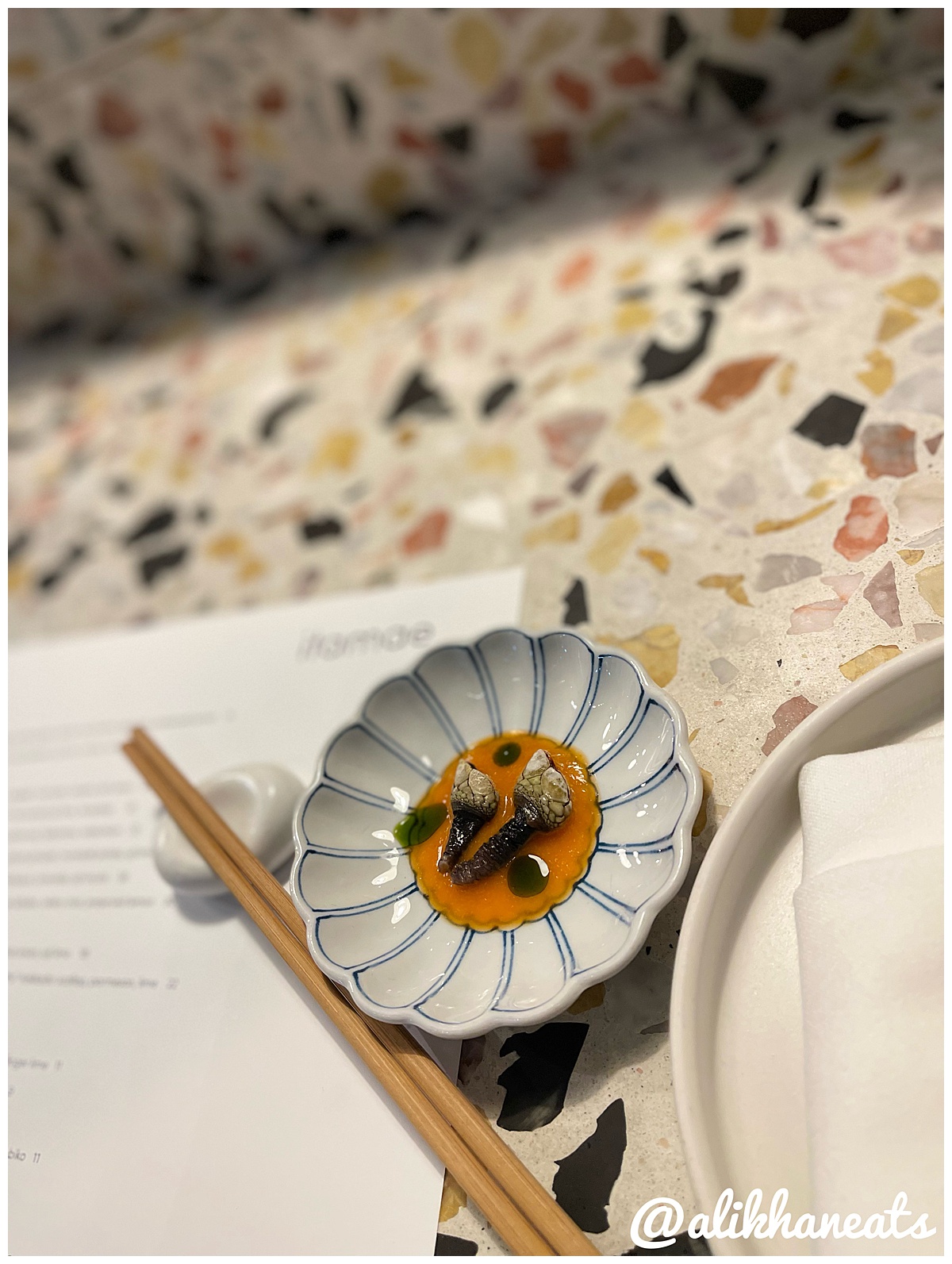 These crunchy little buggers were a tad tricky to eat(i.e. I hope you like a good shell slurp) but man was it pretty and absolutely brimming with a pristine taste of the sea albeit, a small taste. An omen of things to come, though the bites get much bigger. 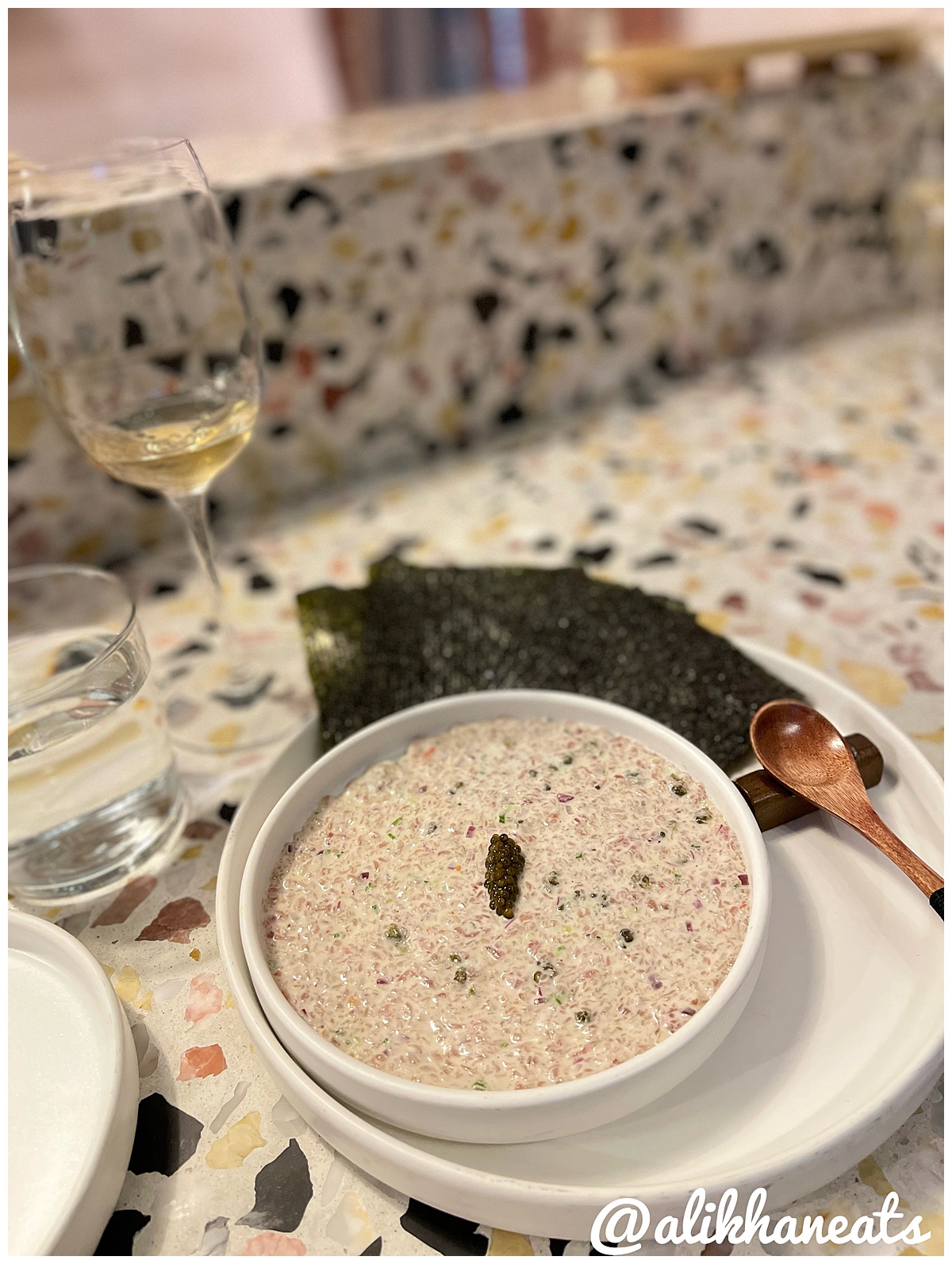 As much as I love a good steak tartare, bluefin tuna tartare > steak tartare. This was as creamy as it looks and yes that is caviar in the middle. Did I mention I dropped a monthly health insurance premium for this meal? 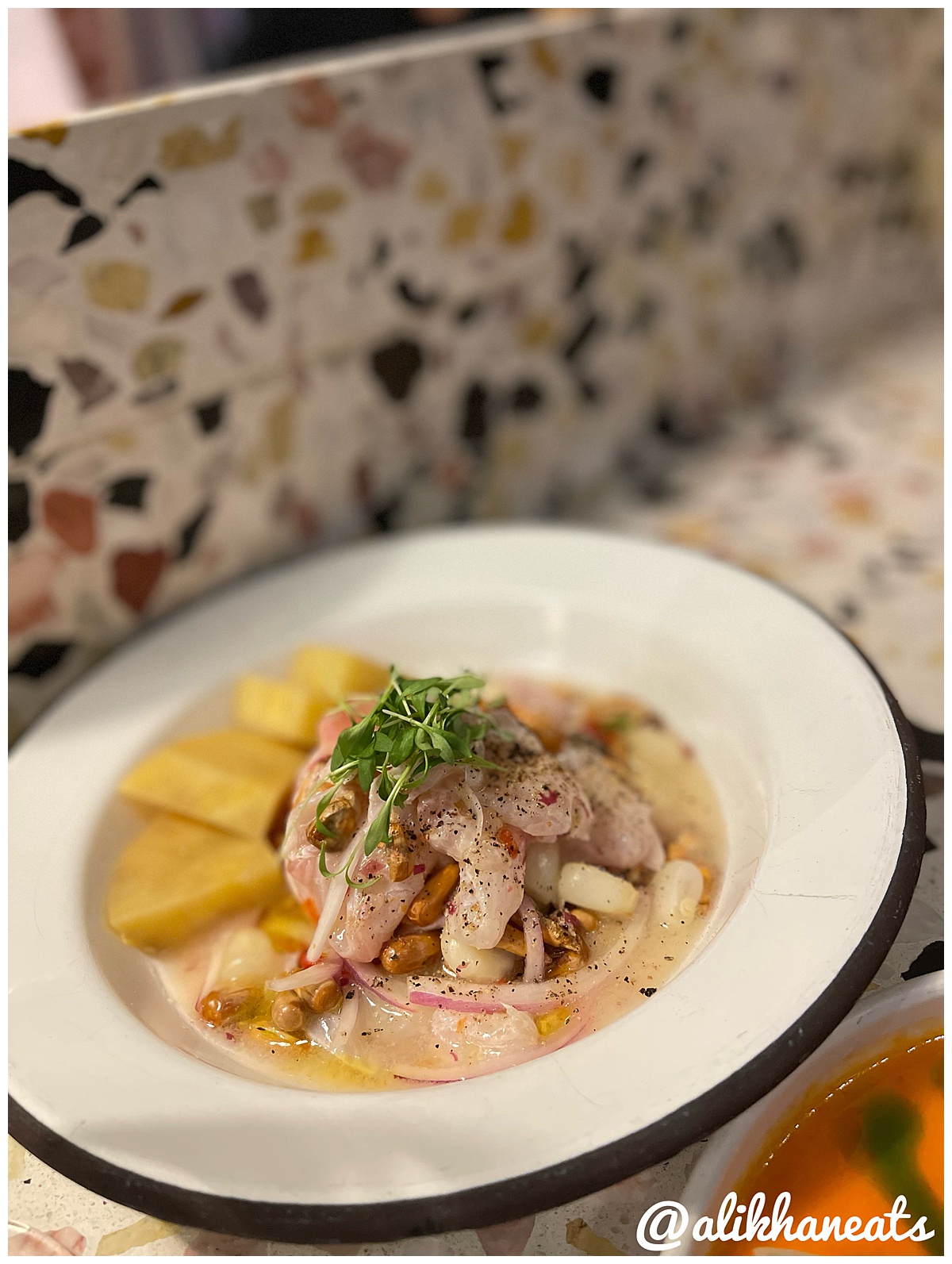 This is where the meal takes a turn from “this is good sushi” to “well, this is different”. Peru sticks out in this dish for sure with the potato in the ceviche that oddly enough had Indian flavors thrown in, specifically star anise and cinnamon. I recall saying to myself “Im eating potato salad vindaloo”. The fish had that pristine quality one associates with expensive sushi. Oh and speaking of quality . . . 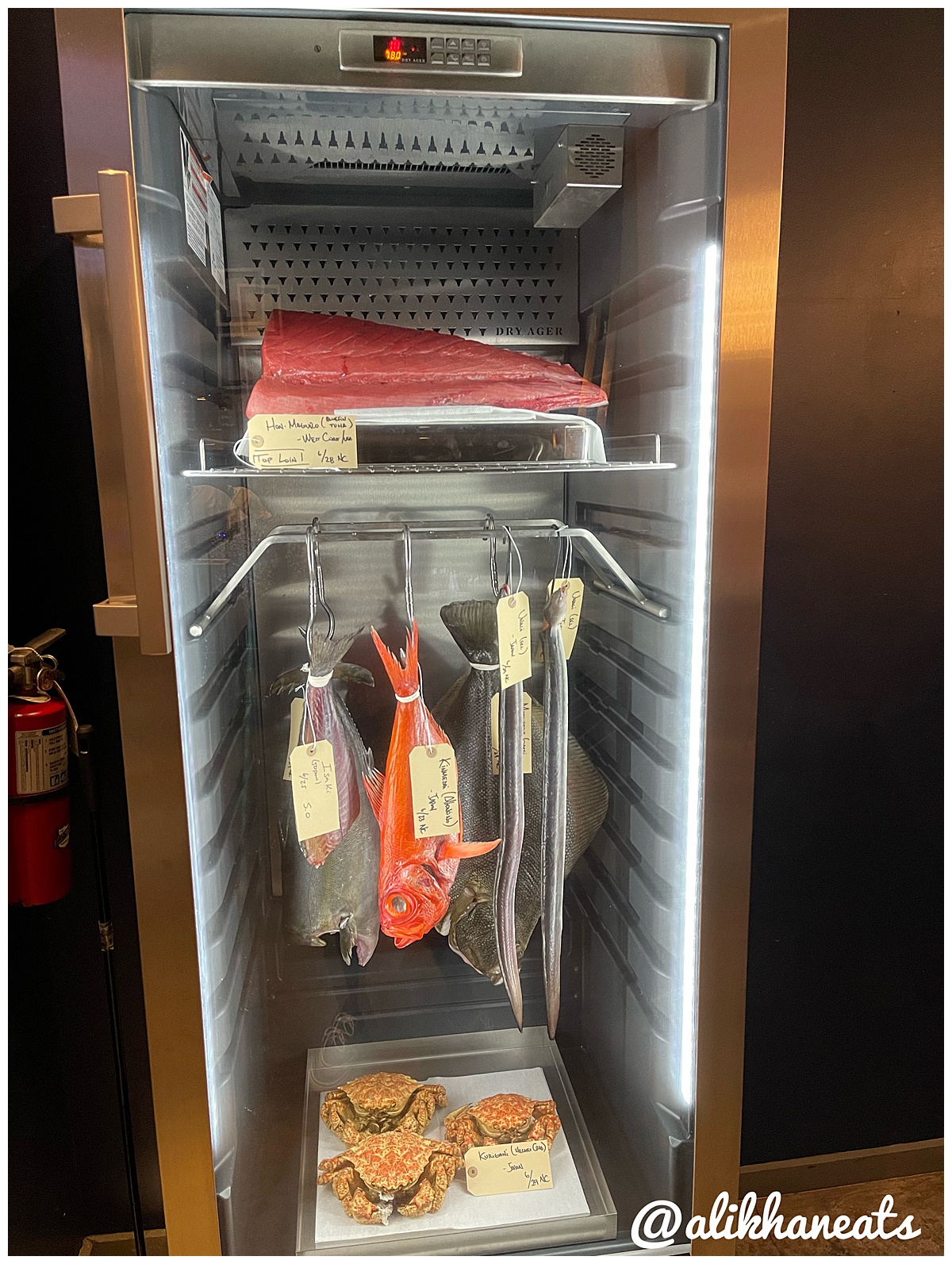 They age the fish at Itamae

Yup, a dry aging system. I had heard about this stuff but this was my first time experiencing it with the fridge on display. Much like dry aging beef, or aging cheese or charcuterie, enzymes not only break proteins down to change the texture but also add complexity to the flavor profile. Think about the difference between a 24 month old wheel of Parmesan vs a slice of Kraft. See, I told you. 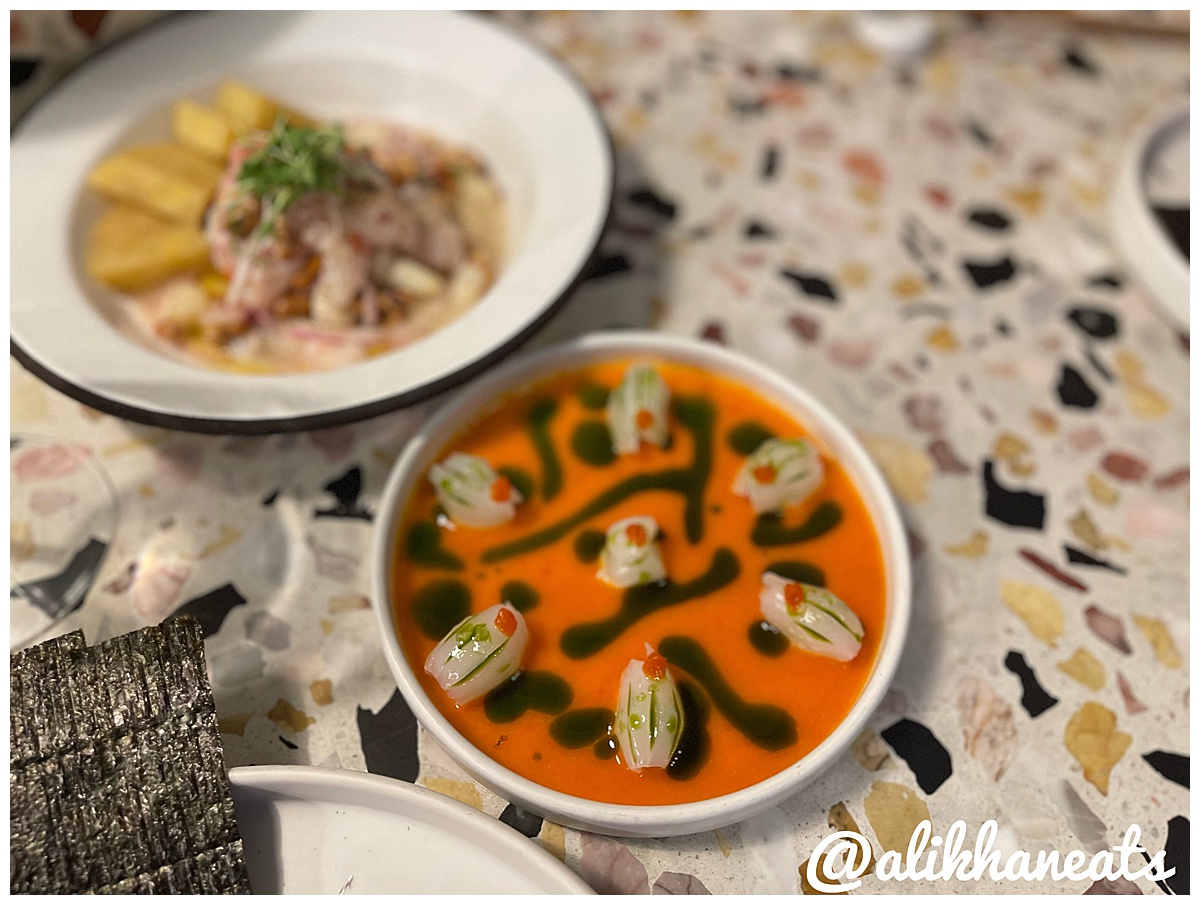 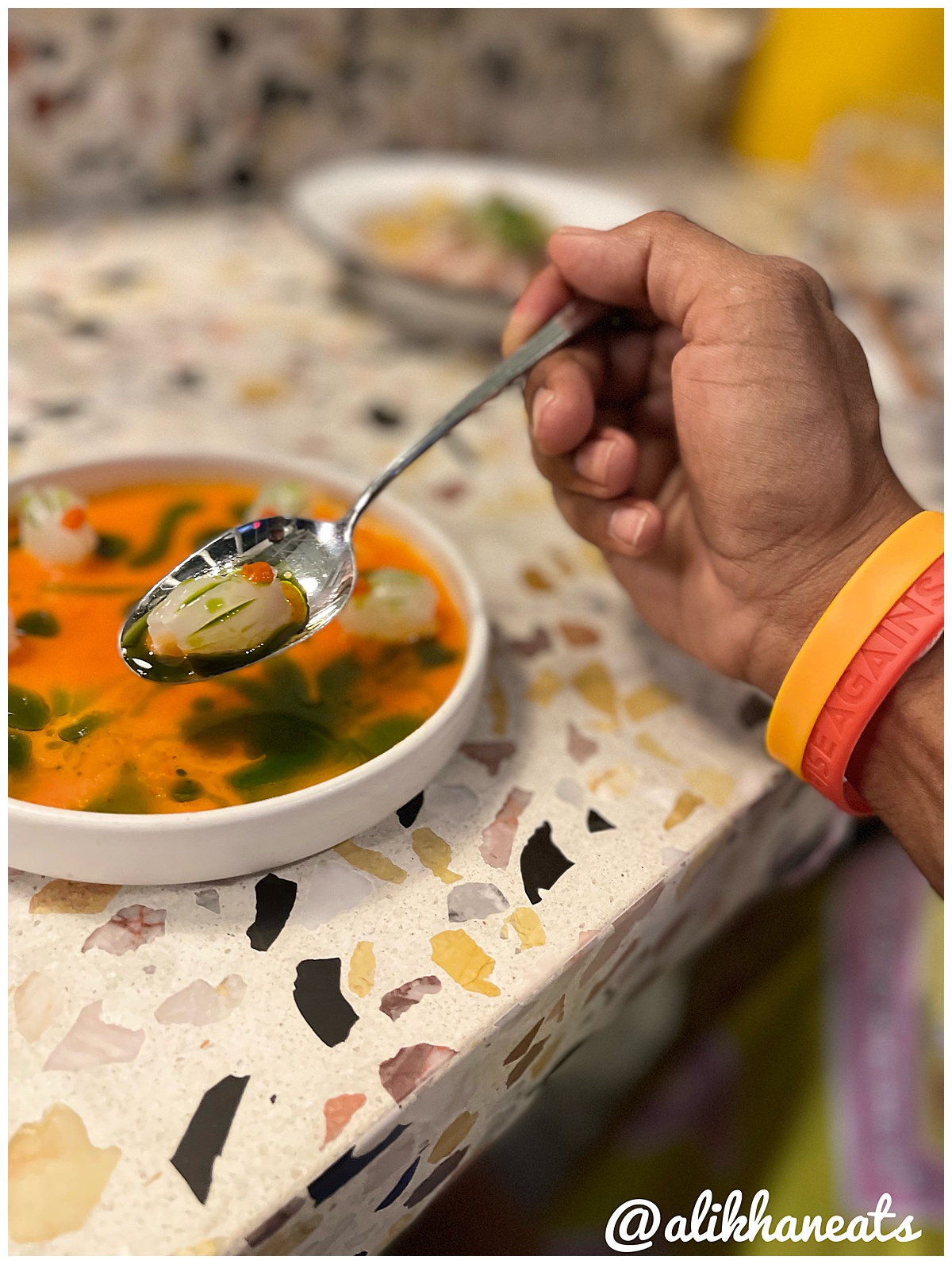 Soy sauce? Who needs it. Itamae’s squid sashimi gets hit with “Tiger’s Milk” which is a common Peruvian sauce for marinating ceviche. This typically consists of citrus along onions, chiles and leftover ceviche marinade. Peruvian ceviches are kind of just next level: pristine sashimi that plays with fire but doesn’t burned. 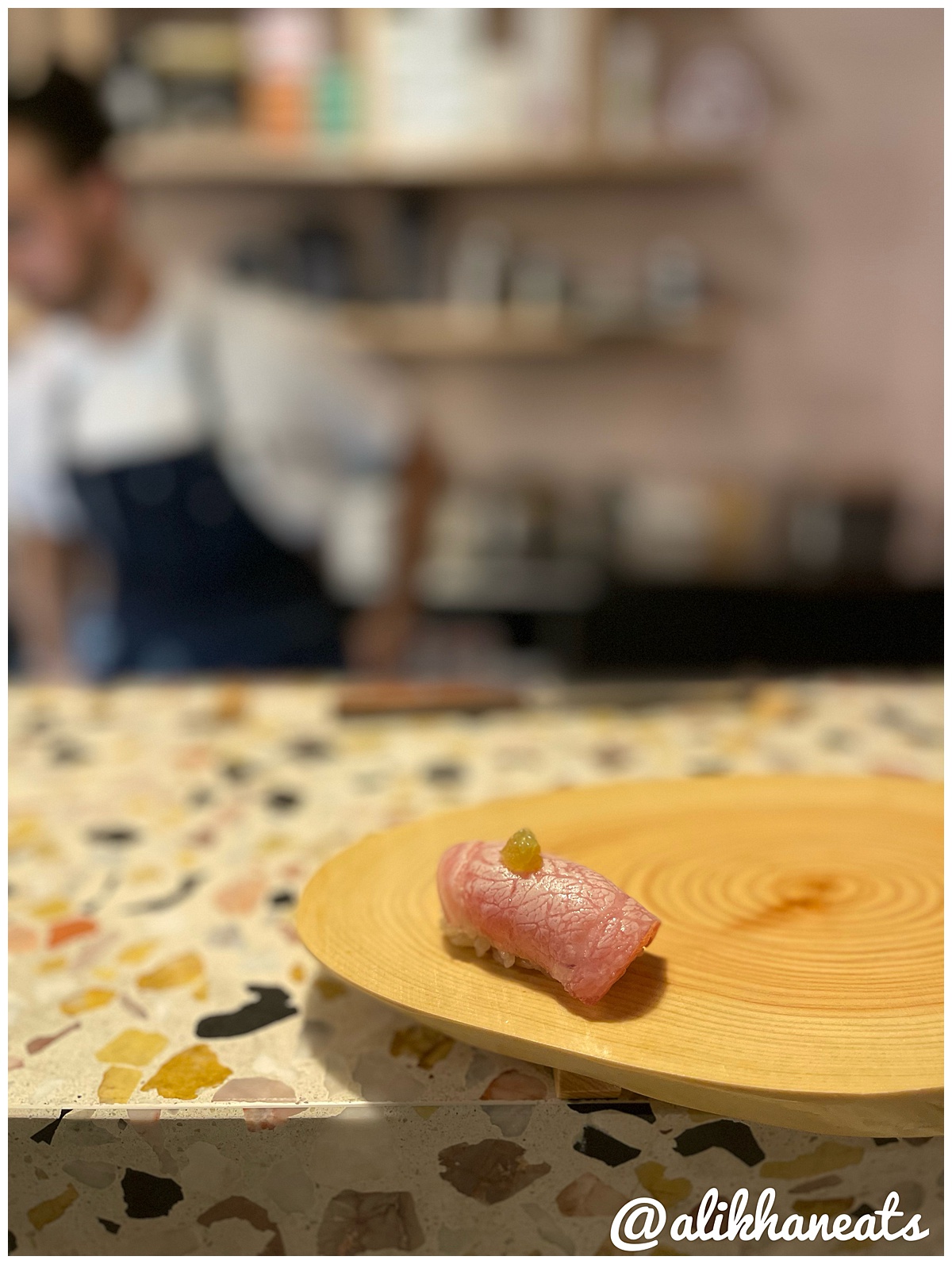 You know in Top Gun Maverick when someone is flying and you hear the beep and everyone is like “oh damn here comes the enemy jet?”. That was what it was like when Itamae’s Toro lands in front of you. But instead of getting blown to bits, your palate gets blown away.

I know Bluefin is going extinct but damn if it doesn’t justify all the money you spend on top of the apocalyptic world I’m leaving for my child. The rice matched perfectly with the melt in your mouth meaty pleasure of the tuna belly. This is the type of sushi that takes you from $$$ to $$$$. 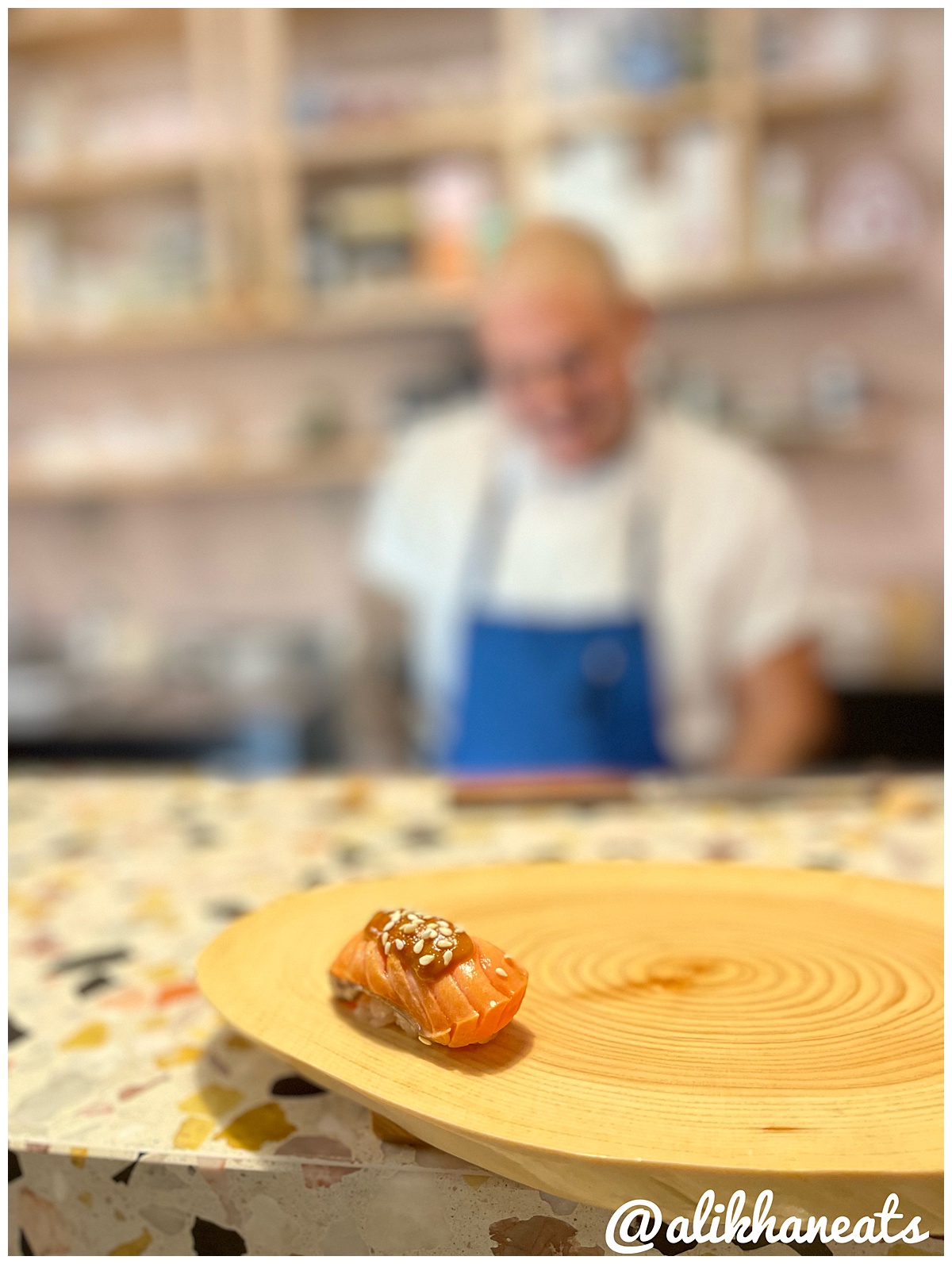 Like Iceman to Maverick(or should I have said Hangman?), Ora King is a fine wingman to Toro sushi. On top you might notice, well something different. Chef called it the “secret sauce”. Hey, everyone has to have their secrets. Did I mention how amazing the sushi rice at Itamae is? Then again for these prices, it better be. 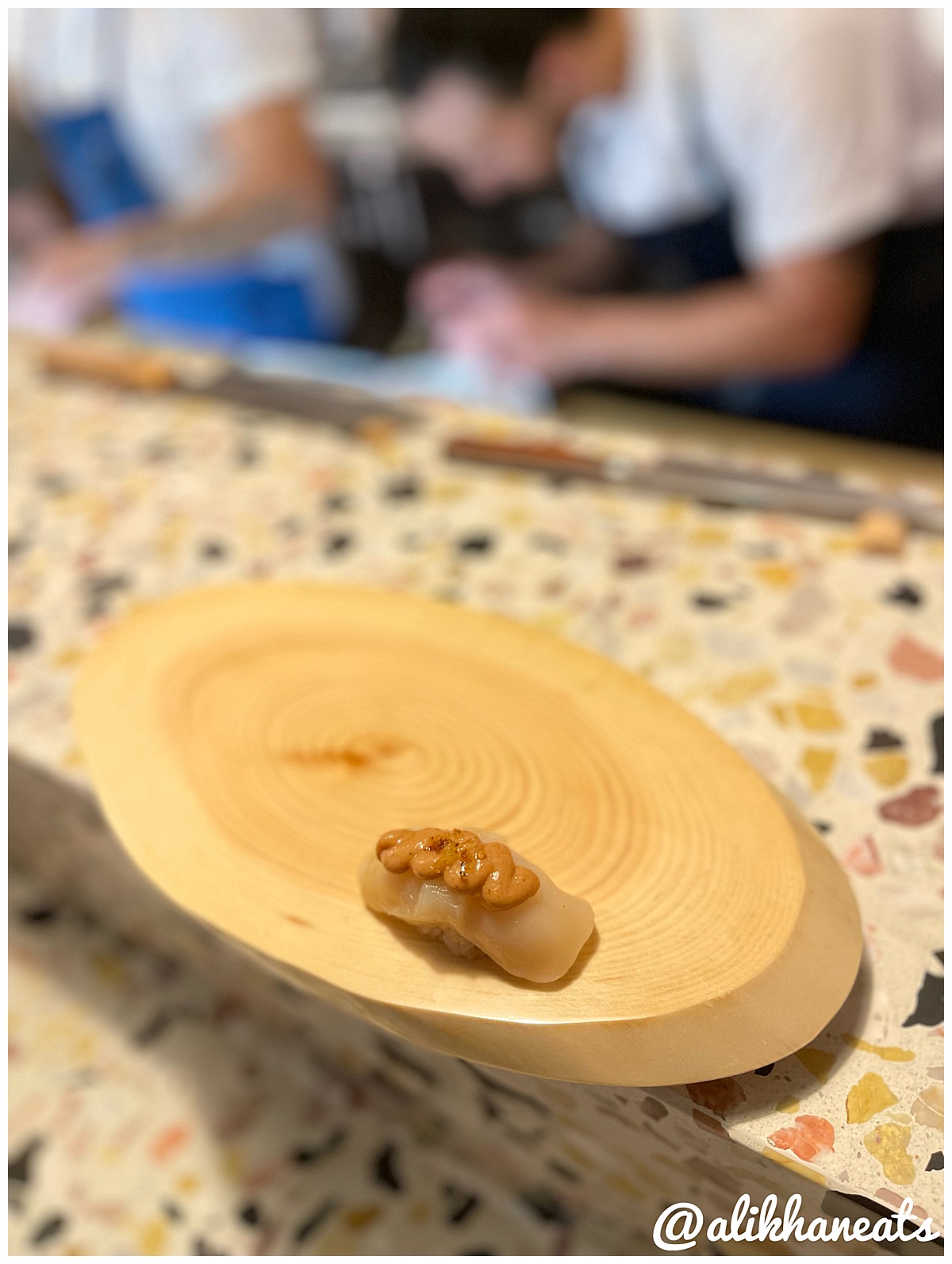 The secret sauce continues with Itamae’s Scallop sushi, though this time chef divulged more details. Get ready for the unexpected, unless you expect ingredients from a smoothie. Banana, apple and charapita pepper are blended to make the thick sauce placed above the scallop.

I wish I could make this up. I also wish I had the balls to combine these elements and put them on a gorgeous scallop. Hell, I just wish I knew what charapita pepper was. I could ask but I have more eating to show you. 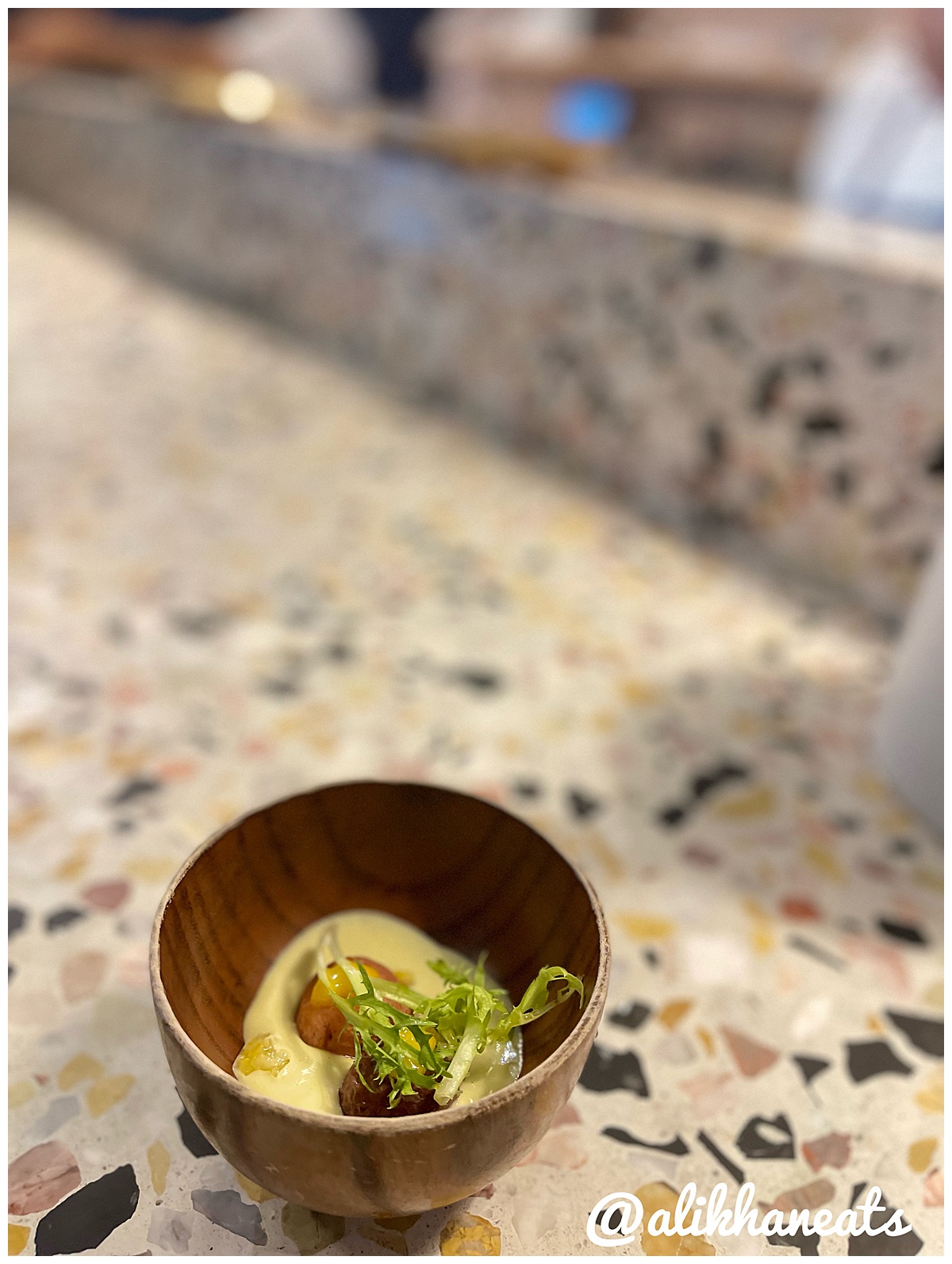 Peru’s staple root vegetable returns in a spicy cheese sauce spiked with shishito peppers. Even when it’s not raw and dry aged, Itamae makes their food look as precious as can be. It might seem like I’m just fawning over everything but this kind of meal is such a treat and welcomed respite from the bbq, burgers and tacos I typically force my iPhone to capture.

I’m also fawning over the umami in this dish. Koji, which is a rice fungus(bare with me) and an umami flavor bomb(just ask Japan) is combined with cream to make a butter. Yeah, it’s an umami butter bomb. Throw in some preserved lemon and frisee and you got one hell of a baby potato dish. 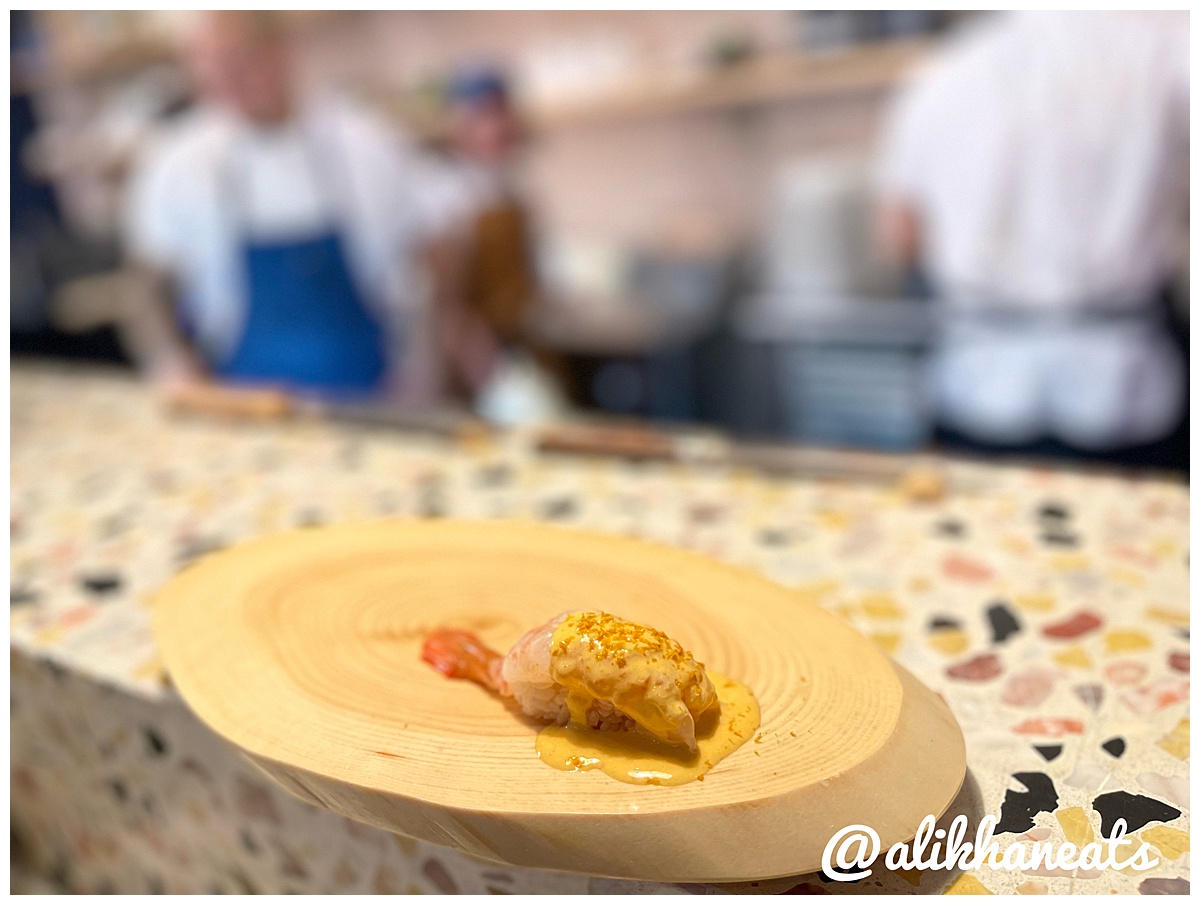 Raw shrimp has an intensity the cooked stuff can’t touch. It is more meaty but the texture is softer with less bounce than the cooked version. Itamae heightens the flavor with a sauce made from sea urchin and grates salted sea urchin, a variation of the Italian delicacy bottarga, on top. 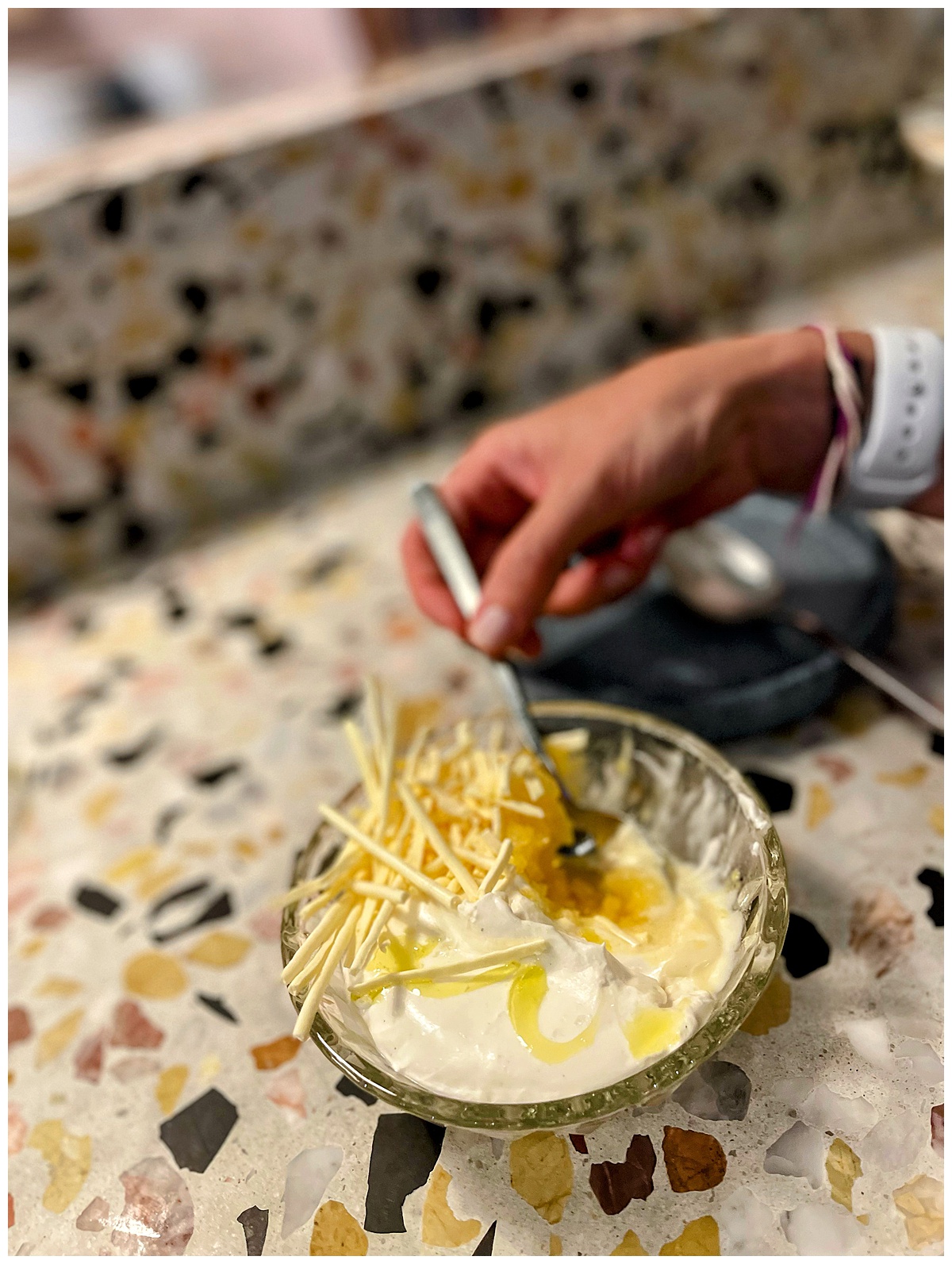 I’ve never had a cremolada before but if I see one again, I am definitely ordering it. Softer than ice cream and refreshing like an Italian Ice, the Tangerine Cremolada at Itamae eased my emotions that my epic sushi, or should I say Nikkei feast was coming to a close.

There’s isn’t much I can say beyond the play by play of what went down course by course at Itamae. If you can swing $200 a person(out the door with drink and tip), then go. I sure want to go back. 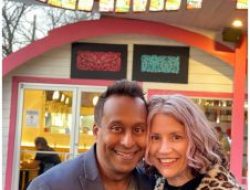 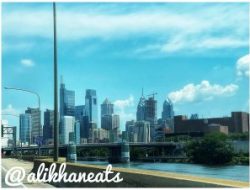