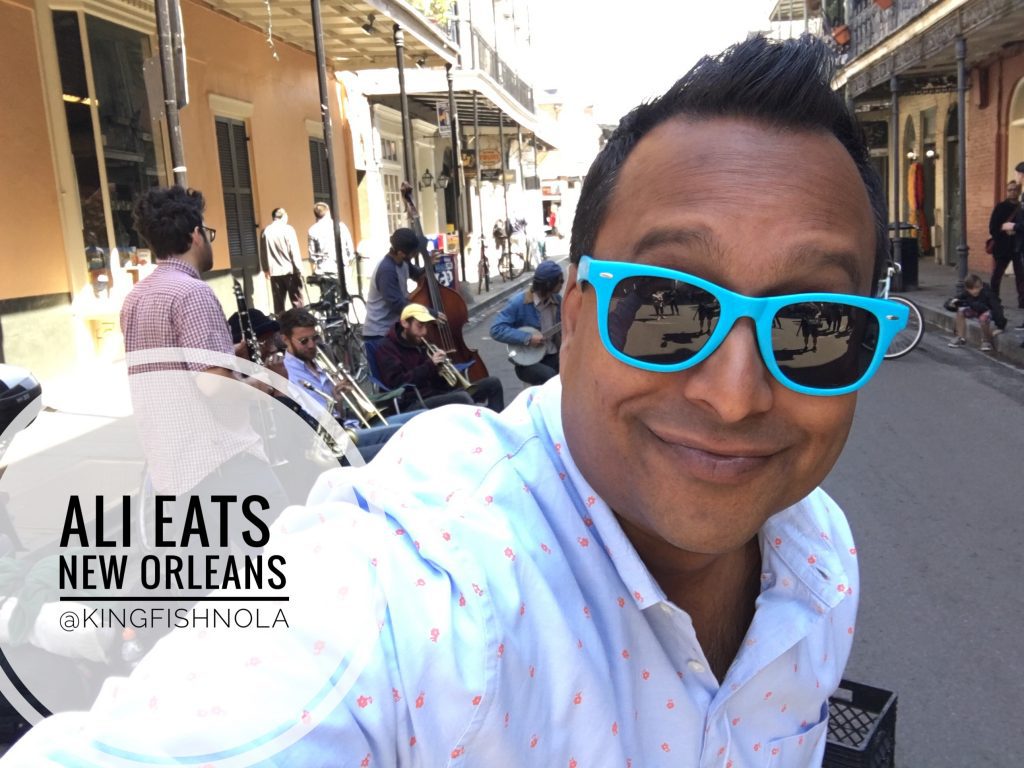 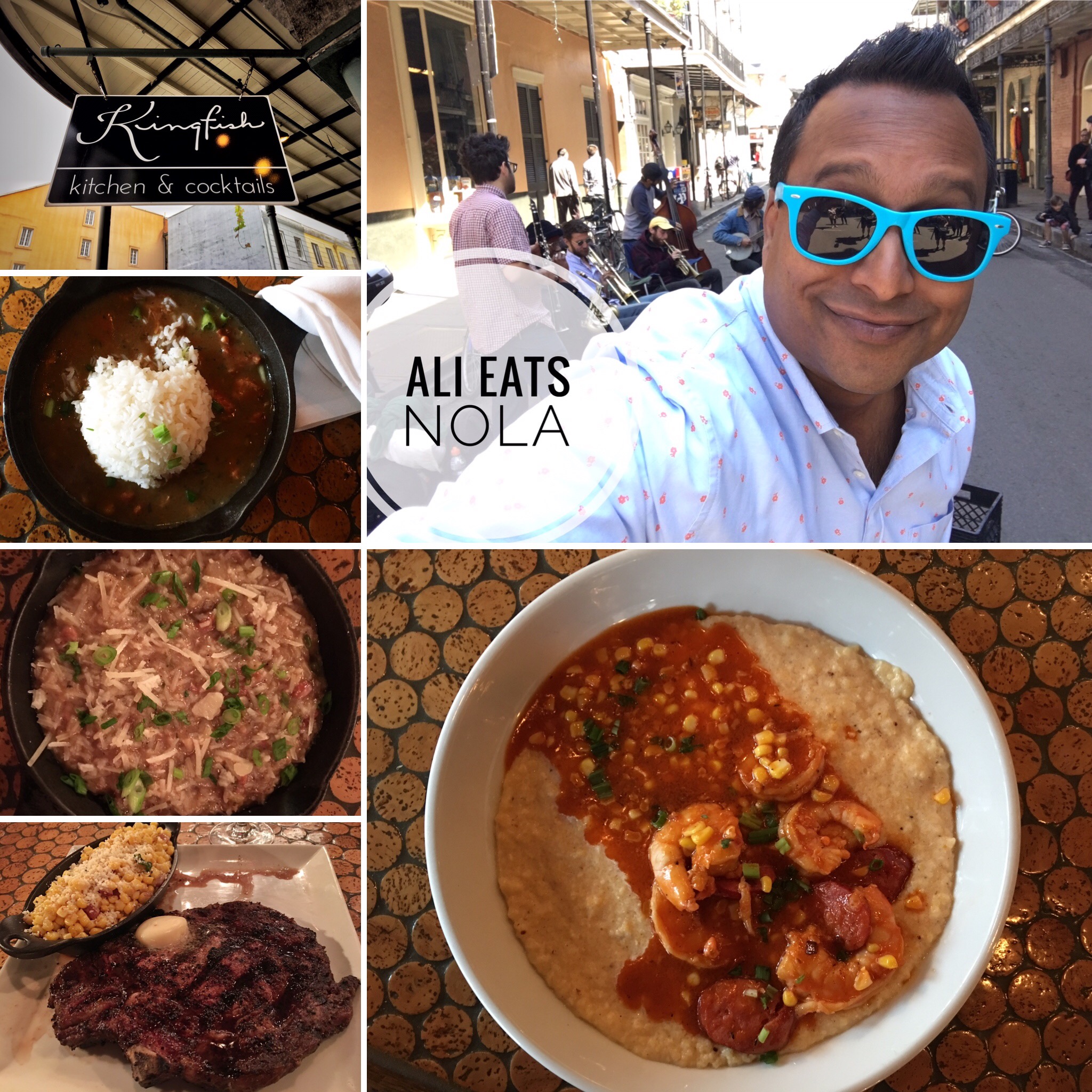 The Vitals:
the spot: Kingfish 337 Chartres St. New Orleans LA 70125
the eats: Chicken and Andouille Gumbo, Jambalaya Risotto, Shrimp n Grits, Ribeye steak(special)
the bucks: $9, $12, $22 and market price respectively(around $30-$35)
the full nelson: one of the few restaurants in New Orleans I have gone to more than once

New Orleans is my favorite food city in America. I love Chicago, San Francisco, New York, Austin and Los Angeles but Nola is just the gem that rises above them all. I lived in LA for 20 years which included numerous weekend excursions to San Francisco. Because of that, the cities I regret not living in, especially during my 20s, are Chicago, NYC and Nola. When one factors cost, food and character, New Orleans rises above the rest.

In 2017 I had the pleasure of spending two weeks in New Orleans shooting Spring Baking Championship Season 4. Armed with a decent per diem(more than a day on Cheap Eats), I went to town in New Orleans and ate to my heart’s content. Kingfish was the kick off Nola restaurant bender and one of only two places I ate at twice in those two weeks. In those two visits, I went deep into the menu. Just how deep? Well . .  read on to find out! 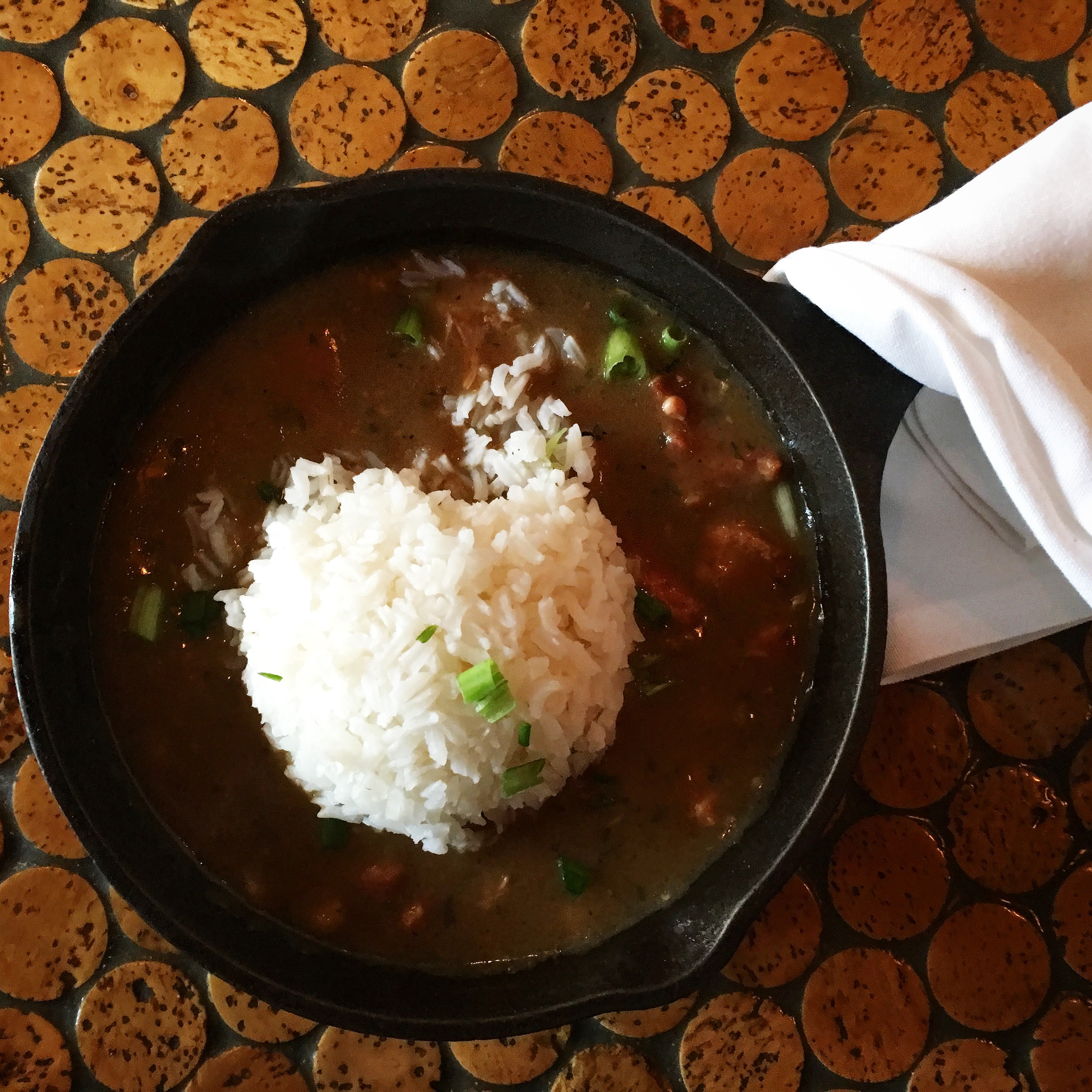 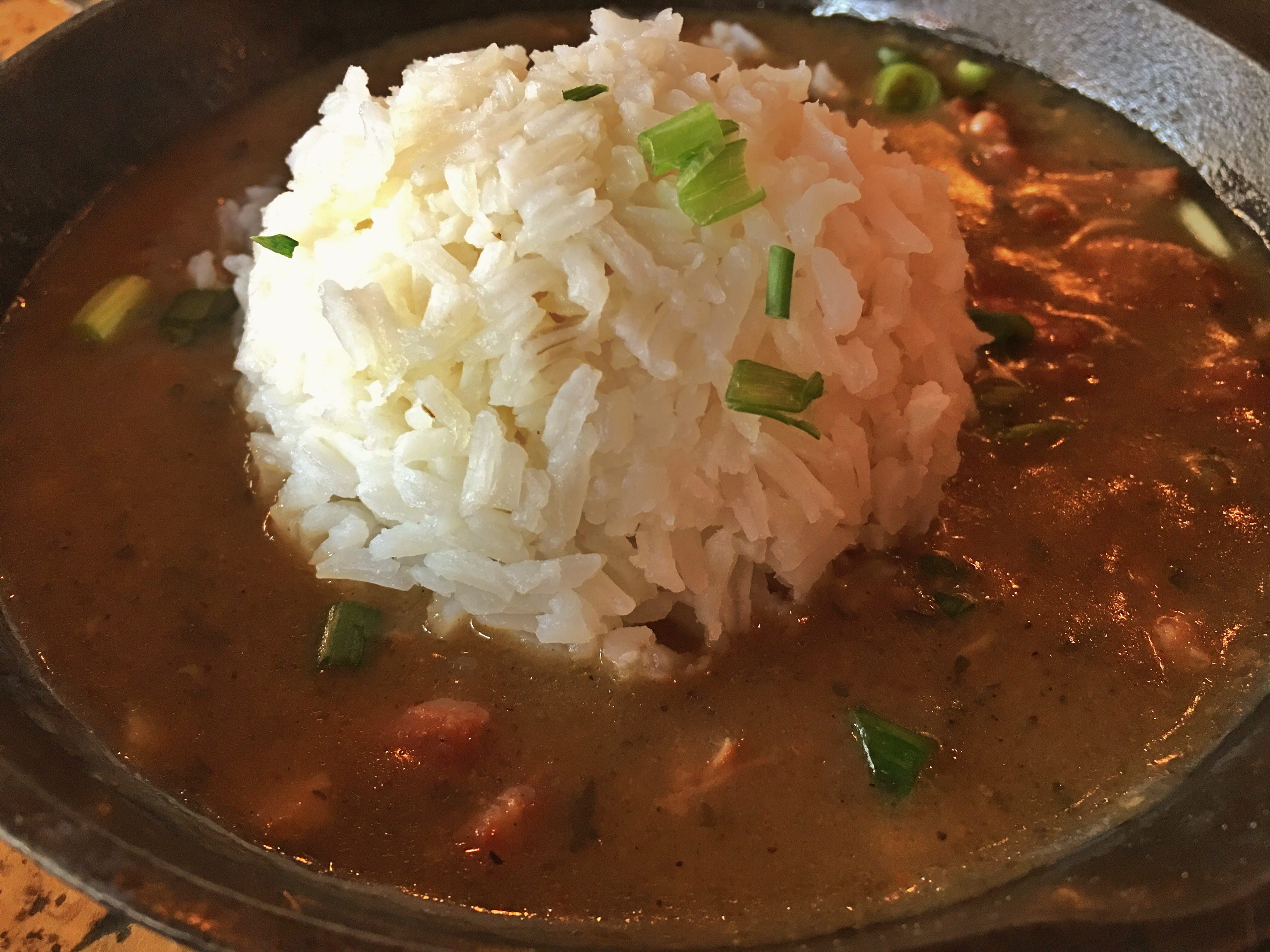 There is loads more to Nola than just Cajun/Creole but there is no denying the absolute pleasure of getting a legit gumbo. Great ones can be found in both dives and posh dining rooms, Kingfish sits right in between, and they served up what could have been the most memorable one of the trip. The key was that roux: dark, rich, meaty and just enough spice from the andouille sausage. Honestly you could come here just for that bowl and call it a meal. But you know me better than that. 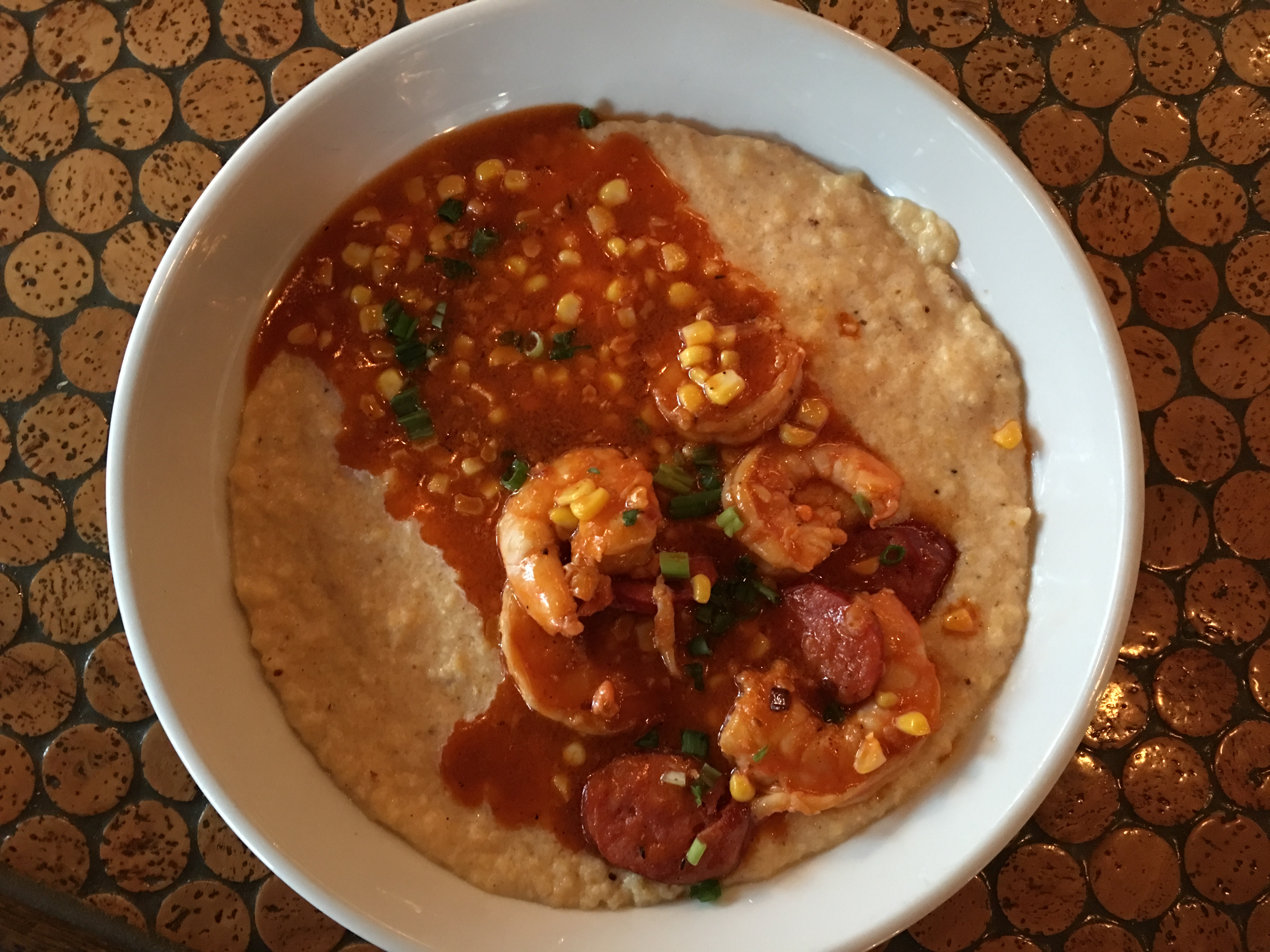 So in New Orleans you’re gonna see a lot of BBQ shrimp on menus. That ain’t lil’ shrimp swimming in bottled bbq sauce mind you. It’s fat shrimp from the Gulf, swimming in butter, garlic, Worcestershire and loads of spices, like paprika, which gives it the red color. I don’t know whats in Kingfish’s shrimp, I don’t know how they do their grits, but believe me when I say this dish is as good as it looks. Looking back on this plate a good year and a half later, I’m so damn ready to hop on a plane back to New Orleans. 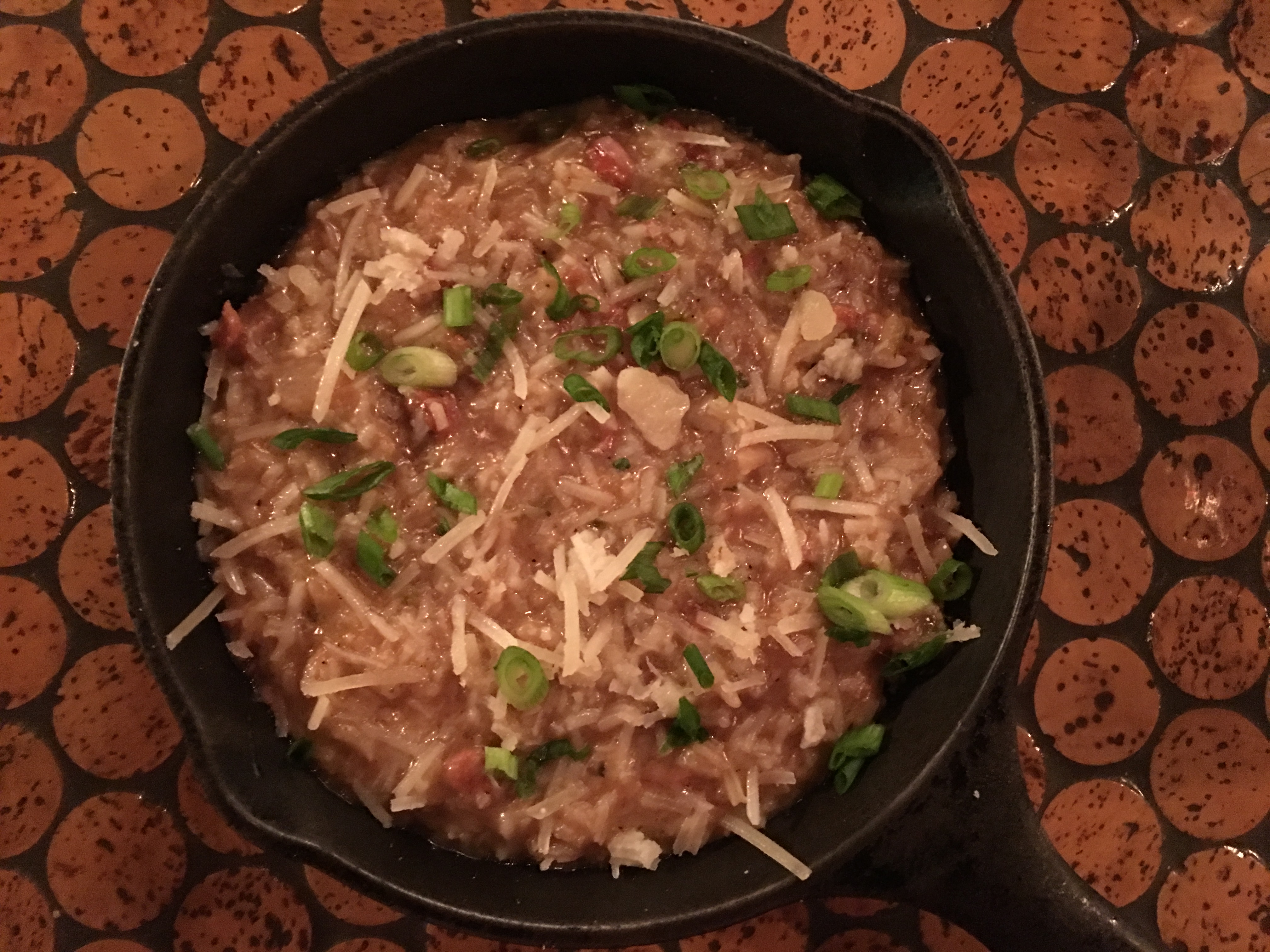 So my second visit to Kingfish was not quite as impressive as my first, but that was most likely due to the fact that I had been going to town on Cajun/Creole food for a solid two weeks and the magic(plus my mojo) started to wear off a little. Well even still, Kingfish churns out a solid meal despite my weariness from all out gluttony. On this visit I started with the Jambalaya Risotto, which was as hearty as risotto studded with sausage and chicken should sound. Still I missed the piquant kick from the Gumbo so if given the choice between the Gumbo or Risotto, I would go Gumbo every time. 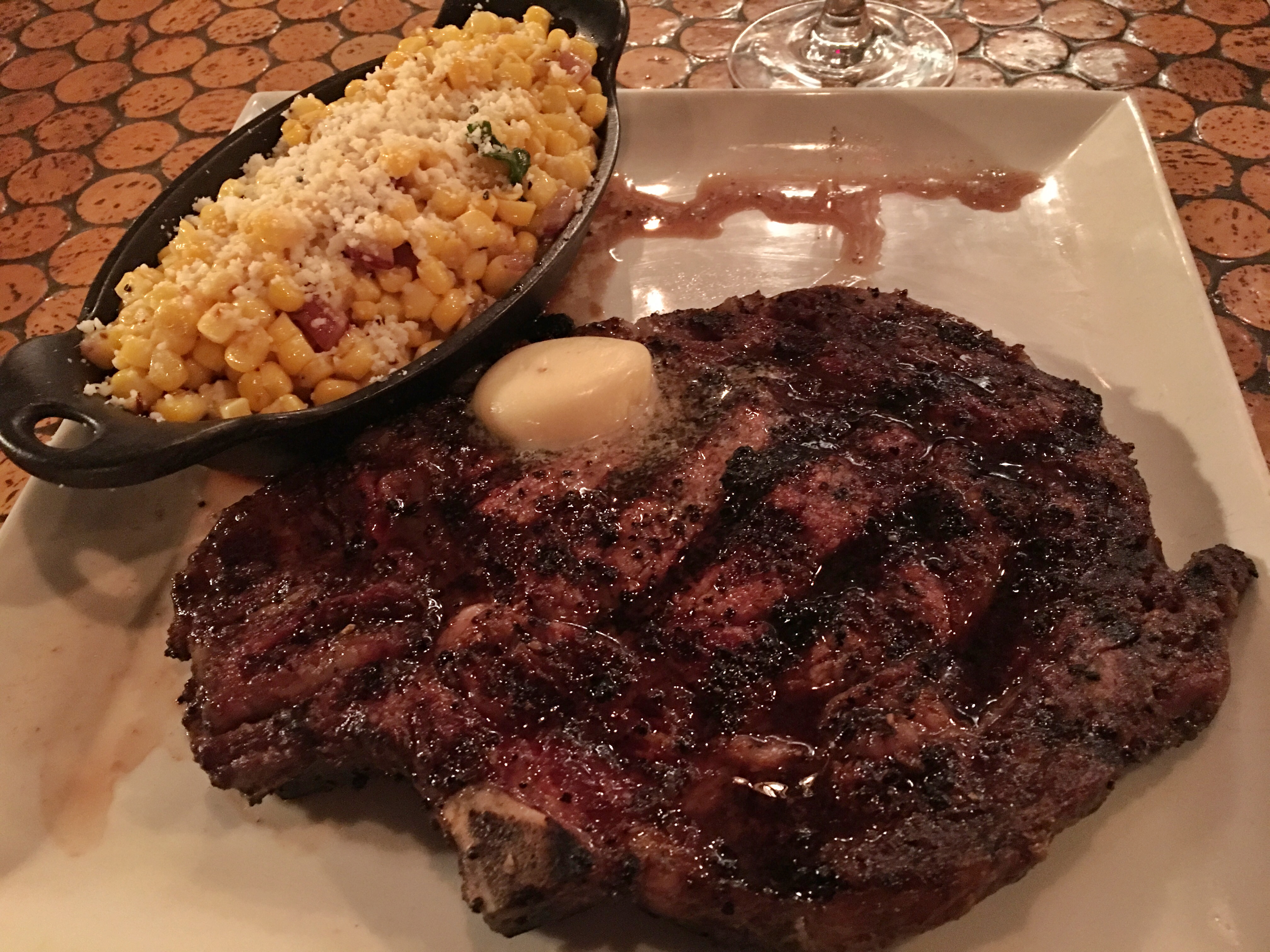 House Special Rib Eye Steak with melted butter and some tasty corn on the side.

Now here’s the thing: you can get a good steak almost anywhere, including my backyard, so this dish was a bit of a calculated misfire. Not bad in any way but why waste your time and valuable stomach real estate with something you can get in any number of cities when you can dine on New Orleans classics like Gumbo, Étouffée and Jambalaya? That’s on me for thinking I needed a steak to feel sated in a town like New Orleans. Yeah, you know you’re in a good food town when steak takes second place. And a good restaurant for that matter.

Kingfish is right in the French Quarter, has a modern but still very Nola atmosphere and you can saddle up to the bar solo, like I did, and feast it up. Though I have eaten here twice and still have many more restaurants to hit up in Nola, I would easily come back to Kingfish for a round 3. And when I do, I will be going all in on the Gumbo and Shrimp ‘n Grits, two classic dishes thats are served up as correct as it gets in New Orleans. 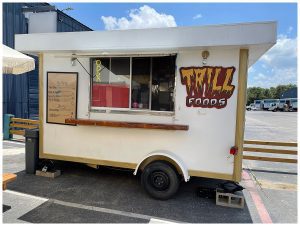 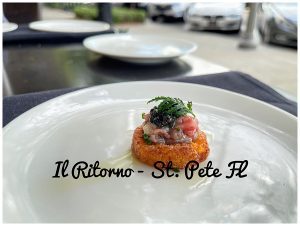 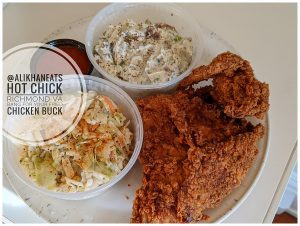 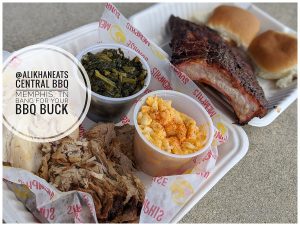