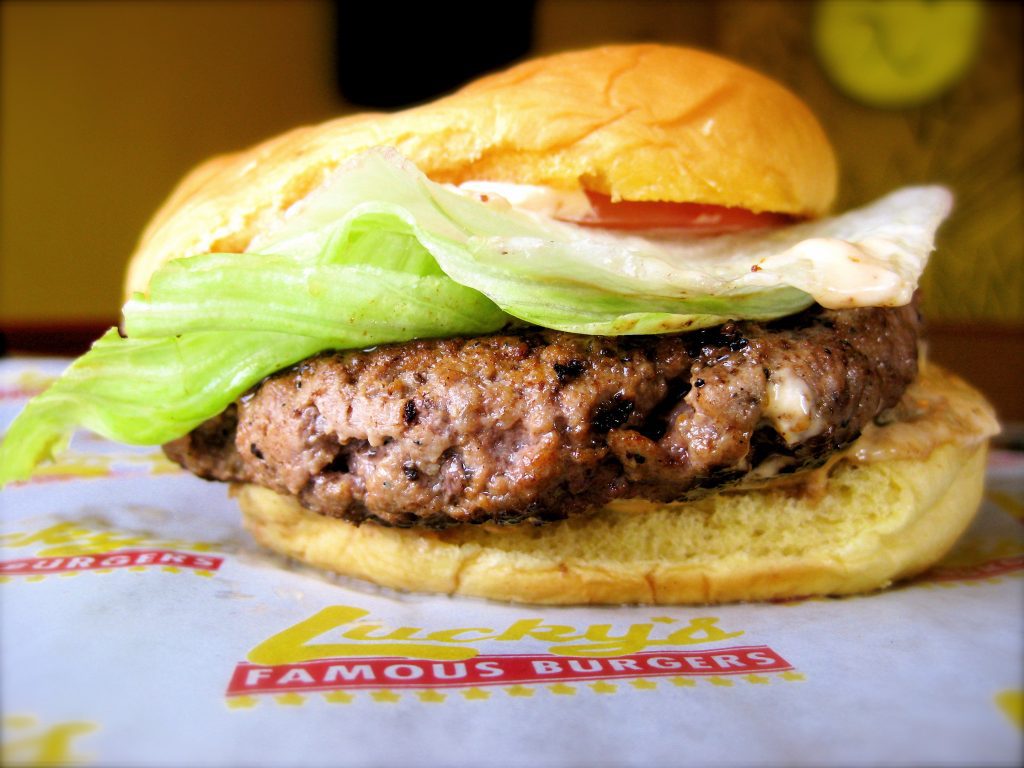 I’m sure for many a New Yorker, Lucky’s Famous Burgers is just another blip on the burger radar screen. If you didn’t narrow your search down to $10 and under, it may not even pop up on Yelp. With no shortage of burgers in New York vying for your snuggle time at their counters, even at this price point, the question you might be asking right now is why go to Lucky’s Famous at all? Well for one thing, they take flattery with genuine sincerity there. I called up a few weeks ago to confirm some details on the bun and when I mentioned that I just loved their burgers, all at once I could hear the surprise, disbelief and gratitude, even over 3G. 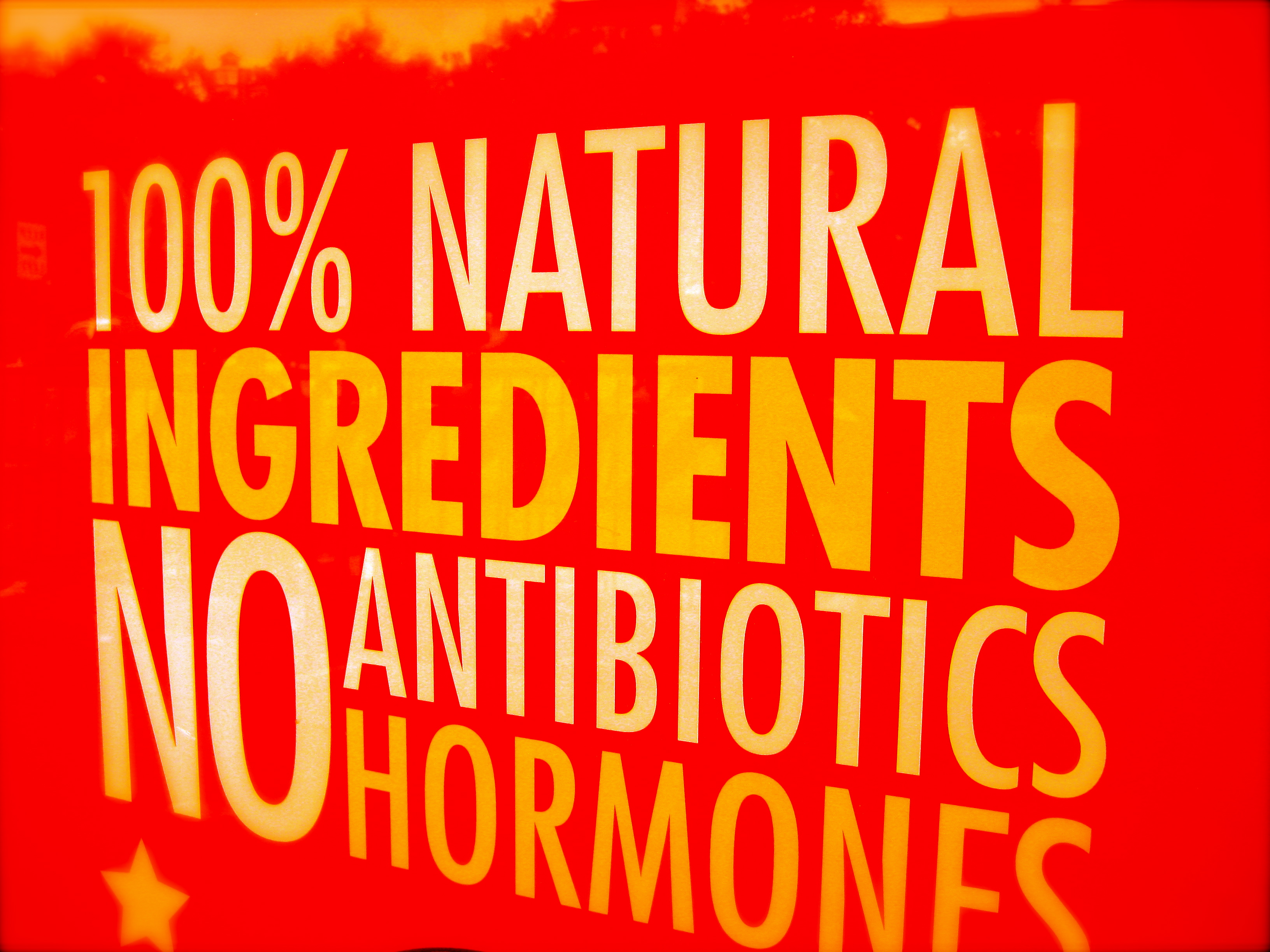 This is another reason. With news of McDonald’s now adding an organic burger to their arsenal, it seems that the trend of offering “premium” ingredients to the masses is here to stay. And that is a good thing. Lucky’s Famous has been offering this “good thing” for about 10 years and at $6 for a baseline burger – well, that is straight up bang for your burger buck. I can’t help but draw parallels to Lucky’s and Juicy Burger – the very first Bang for your Burger Buck post, the one that started it all. Both joints have you walk up to the counter, build a burger to your liking and wait for what culminates into a working man’s lunch treat or the happy drunkard’s late night nosh. The latter was my first foray into Lucky’s. It had been a long day of burgers, IPAs and a dash of jet lag. I still had the bright lights of New York glazed over my peepers and my general disposition. It was that moment in a New York trip when you simply walk into whatever is in front of you: dive bar, museum, fried chicken specialist or in this case, a neighborhood burger joint. I suspect that those who hang their hat in the Lower East Side would consider Lucky’s to be at best a perfect sate for an emergency burger crave as the neighborhood bodega is for needing bottled water during a code blue hangover. The greatness is derived from proximity as well as the food and it illustrates the larger truth of living in New York. In a city that is teeming with everything, including legendary must haves worth taking three trains during rush hour to get to, there is an equal need for the places you go to because it’s right there and it’s good enough. Good enough to not wait in an absurdly long line at Shake Shack or cross the bridge into Brooklyn for. A perfectly good burger you can have so easily. Whether it be at the close of an evening or when you’re running short on time for lunch, or when you just happen to have 15 minutes to kill. Lucky’s Famous is that easy burger treat. Also making Lucky’s just so easy to like is there namesake sauce which is in actuality a hickory smoked mayo. Yes, I really said hickory smoked mayo. Let’s get into that.

The similarities of Juicy Burger and Lucky’s Famous really hit home for me over their use of sauces. Juicy Burger uses the familiar SoCal go to, Thousand Island dressing. Meanwhile at Lucky’s, the namesake sauce, despite the exclusion of pickle/relish, still bears a distinct and overall similar experience of flavor, thanks to the infused hickory smoke. In both instances, the sauce is fundamental to the enjoyment of the burger. So good in fact that you don’t need the cheese, a dairy ban that amounts to not only a wise display of flavor smarts but a cheaper burger as well. Of course there are other directions one could go in terms of the wet stuff, but you gotta recognize the power of a burger joint coming up with their own sauce. It literally becomes their wet signature and part of the experience you end up craving. I can’t attest to the sauce being overtly “smokey” but the piquant flavor presence would certainly keep me from straying far on future visits. Over their 10 year run, previous correspondents made mention of Lucky’s burgers being tinged with smoke – on the patty specifically; an act that drew from these burger connoisseurs, considerable praise. By as early 2009 it seems the technique was dropped. Whether the sauce became an evolution of attempted backyard BBQ infusion is at best burger blog conjecture, but the call stands: get the burger doused in Lucky’s Famous Sauce.

Ratio of beef to bun is fundamental to a successful burger and both beef and bun know their role in the epic of Lucky’s Famous. Cue the Martin’s potato roll, the very same utilized by Shake Shack and the darling of Chowhound for being the best commercial hamburger bun available. While the image of the bun at Shake Shack conjures up perfectly flat hamburger patties, the very same bun also offers the right dimensions for a standard issue NY pub/bar thick style burger. When burgers come out thick, the likelihood of getting one served up juicy increases exponentially. For me, it is always a welcomed sight to see a bottom bun just about to buckle from the weight of the burger, a big smear of the house sauce and a pickle swimming in all of the above. God do I want to eat this now.

Also key to having a thick patty is the extra time it can stay on the griddle, thus developing a serious char while keeping the center temp close to Death Valley levels. As much props as I give the sauce, the Maillard reaction delivered by the guy behind the griddle is as important to the flavor. The prep station knows their ratio for toppings as seen with just enough lettuce layered in, as well as sliced tomato and onion with an appropriate thickness. The result is a burger that retains it’s composure, with or without the wrapper, but reach for a napkin you surely will.

Juicy and tangy pretty much sum up the insides of this burger. Lucky’s likens themselves to a 1950’s throwback, and to a certain degree, they do deliver that simple and classic burger experience. But, take stock you must in beef cooked to a connoisseur’s content and ingredients selected with an enlightened modern food awareness. Like the style of the patty, the yellow egg wash of the Martin’s potato roll’s is a familiar sight to the burger loving New Yorker. Hardly unique. Not much of a stand out. Of these descriptive qualities I cannot refute. But for $6, this burger is a neighborhood go to, and with three neighborhoods in Manhattan that Lucky’s calls home, it is an important, convenient, burger treat. 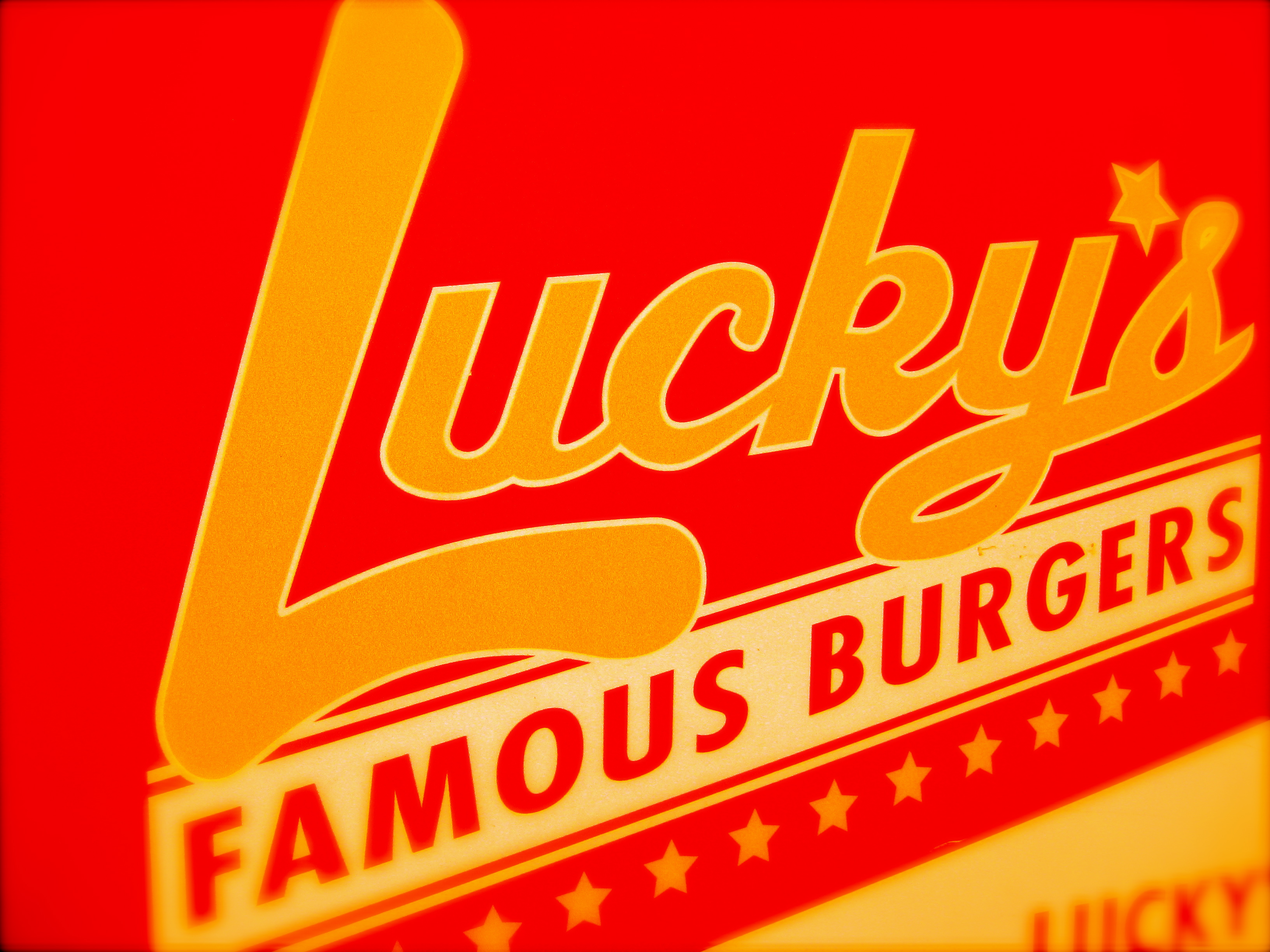 In a town known for big time movers and shakers, we forget that the blue collars out number the white collars. We overlook the places where regular folk eat in New York. For those who may not have connections to get a table at Spotted Pig on a Saturday night, or who might choose Knickerbocker over Keens for their Porterhouse fix, Lucky’s Famous is a burger deserving of recognition. Let’s remember that even in our current burger renaissance, it’s not always about decadence, gluttony or even pleasing a moral high ground of eating. As intimidating as it is for me to come to a city like New York and give out burger props, I know that people here revere value and satisfaction like anywhere else. And when you encounter an establishment whose staff falls humble by a seemingly random compliment, you found the right joint to write about. A place that is of, by and for the people. Paul Newman had a great line from the The Verdict where he tells the jury that they are in fact the law, and not some book or statue. I feel that way about Lucky’s and the NYC burger scene. As big and as important New York is to the food world, it’s also a place where regular people live, work, sleep and eat. And every time someone scores a solid $6 burger at Lucky’s, we are reminded that they can also eat pretty well.