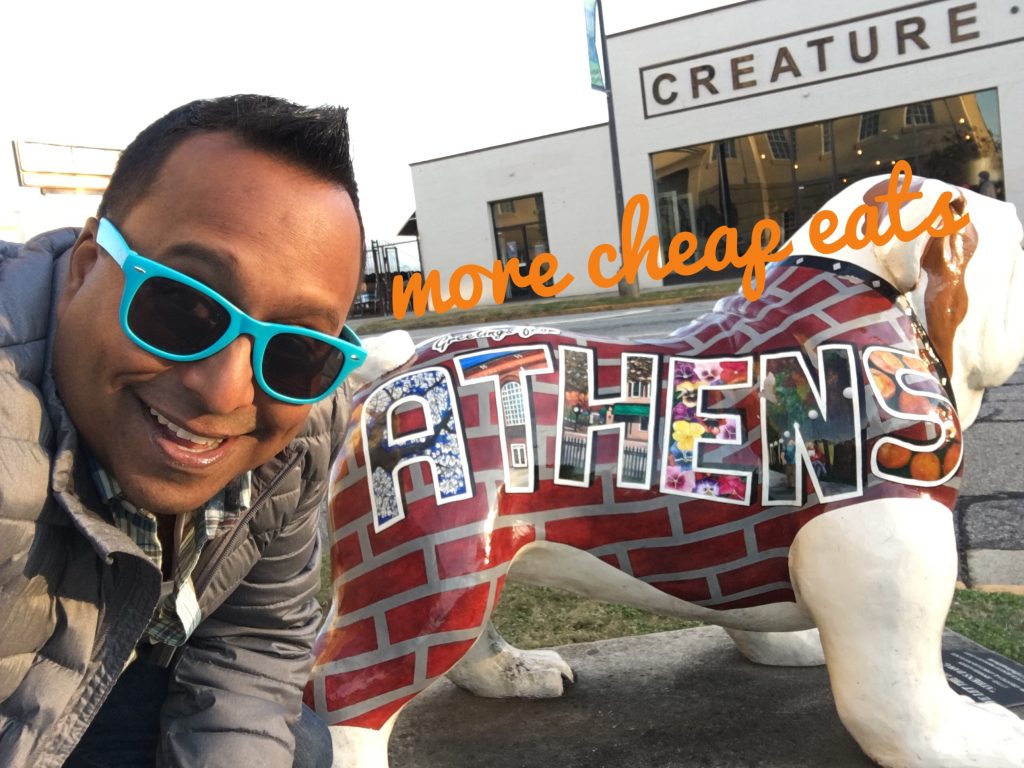 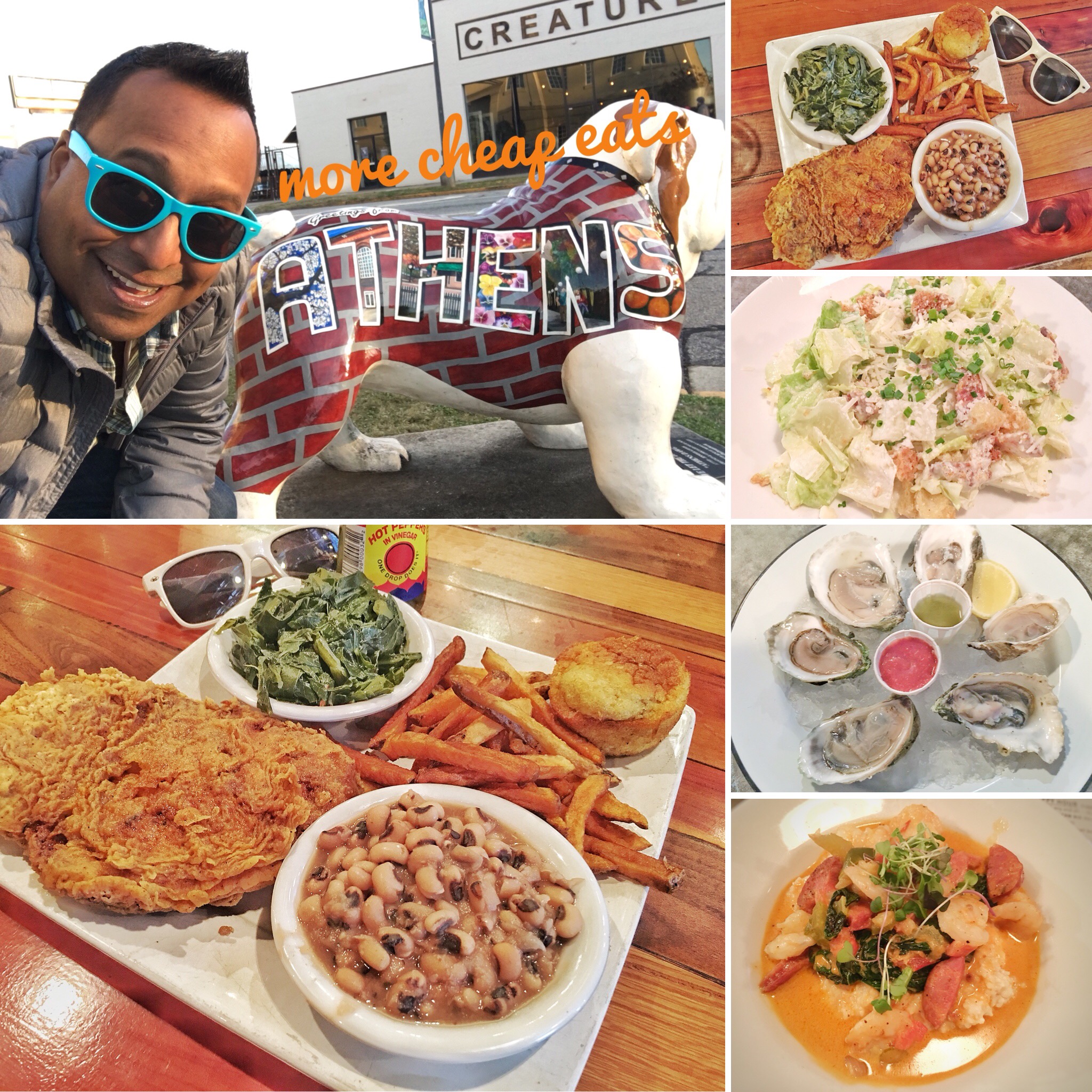 Not every city I visit on Cheap Eats warrants a second posting but as I flipped back over my iPhone camera roll and receipts I was stunned to find even more deals, hence this post: More Cheap Eats Athens. And I say stunned because when I was out dining on these here meals, budget was not in mind. I was craving whiskey and oysters when I popped into Seabear. The following morning I was in need of a stick to your ribs meat and three kinda place, which landed me at The Place. In under 24 hours I had two memorable meals that were also legit cheap, which means we need to take a bite out of more Cheap Eats Athens! 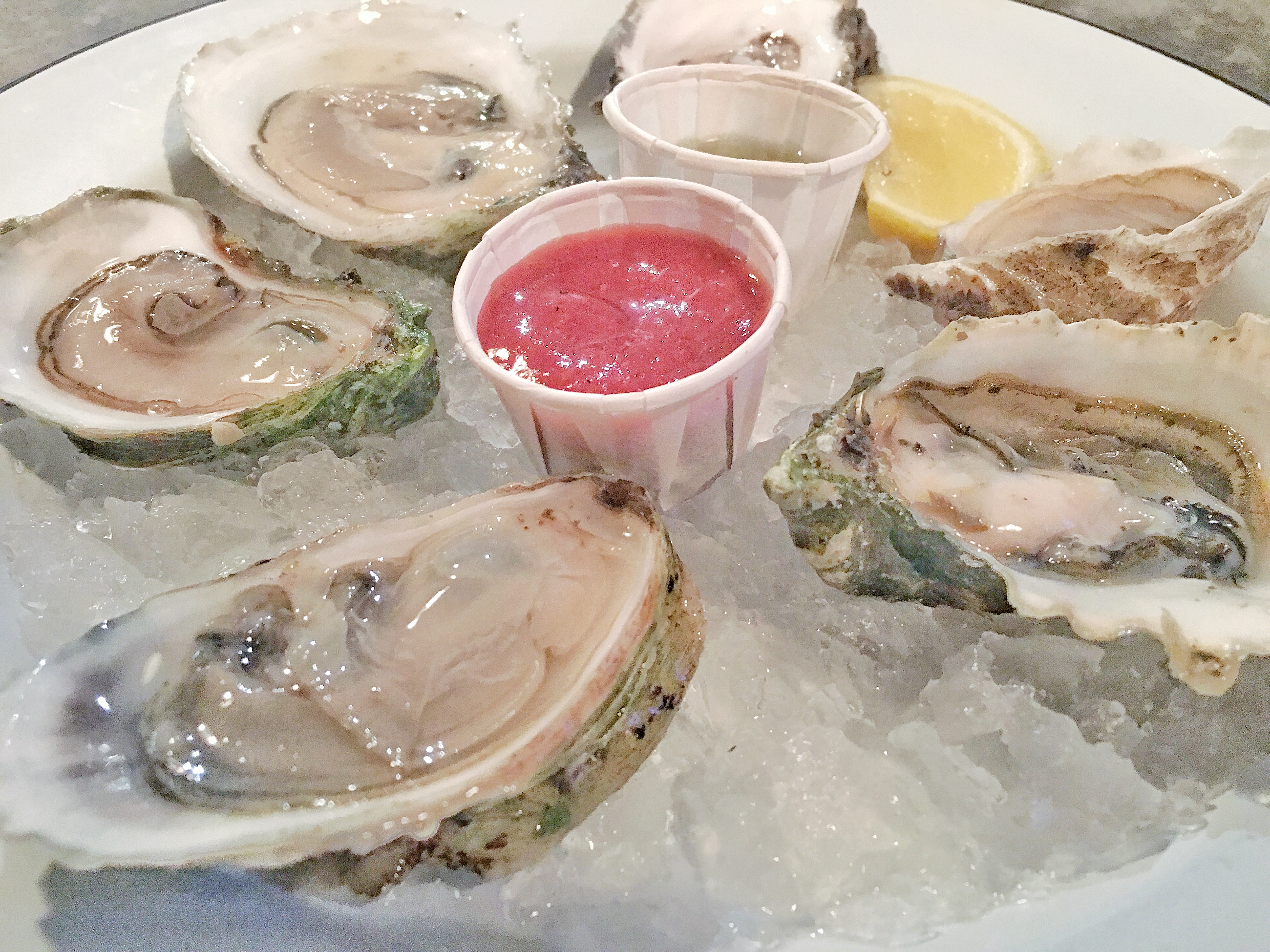 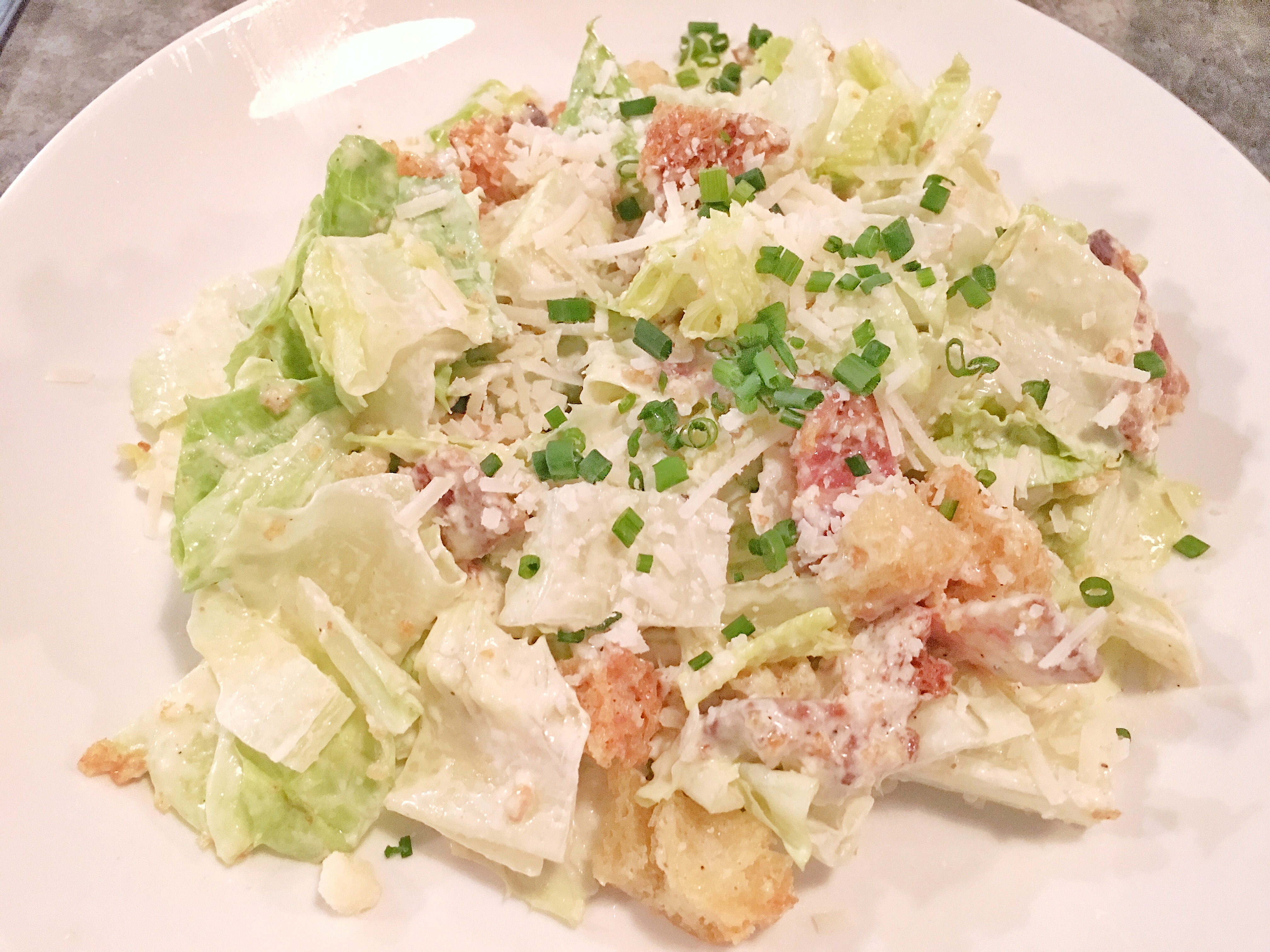 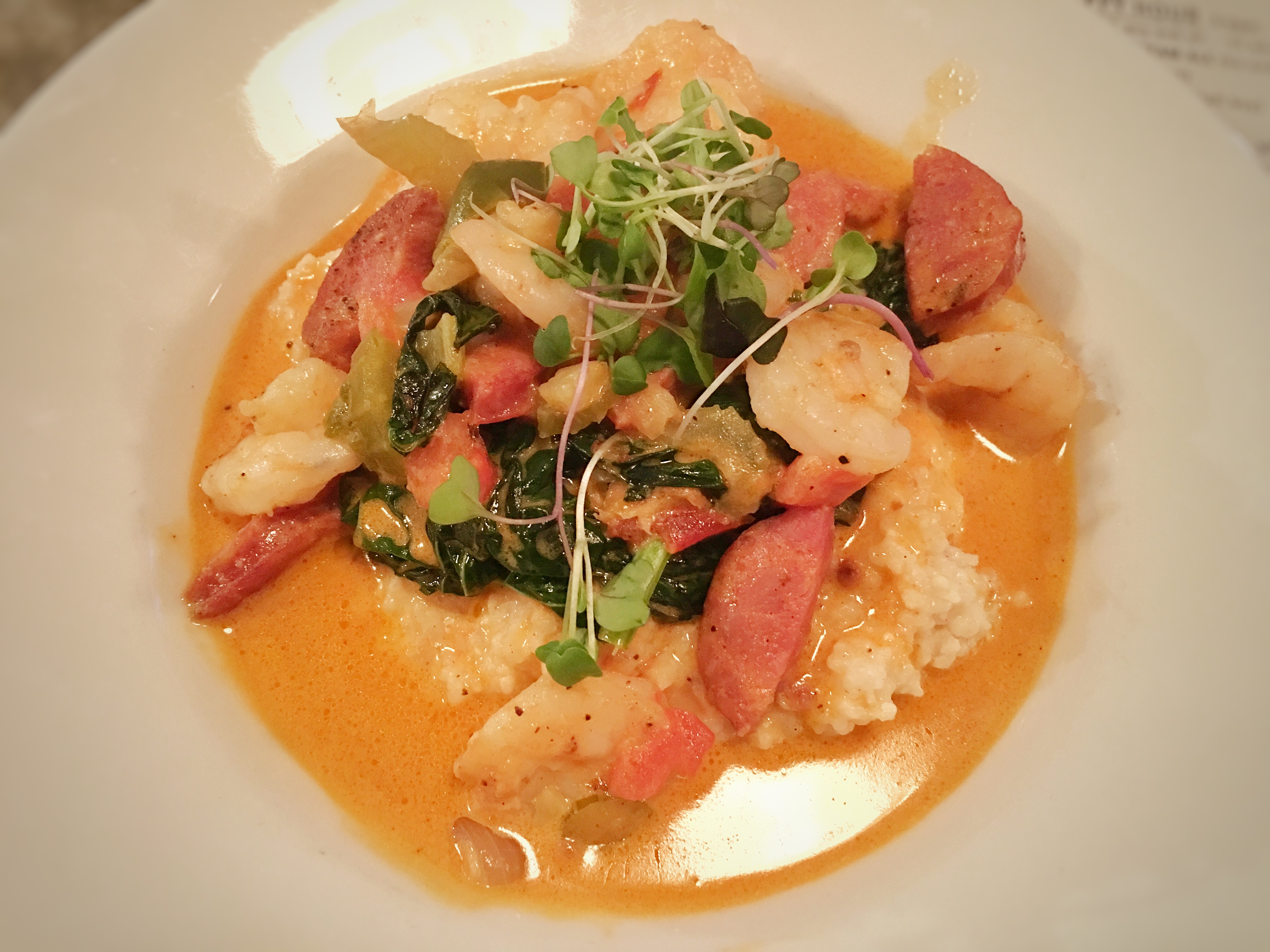 Good oysters are seldom cheap unless the establishment has them on happy hour. Lucky for you and me, Seabear Oyster Bar has two happy hours: 3pm-6pm and 10pm-12am. I opted for the latter and had my way with the bivalves of my choice at a measly $1.50 a pop. A solid Caesar salad is a great transition from raw oysters, with a pronounced flavor from the dressing and some heartiness from the Parmesan and crouton, but it’s still a salad so you won’t be too weighed down. Between the oysters at $1.50 a pop during happy hour and a Caesar at $10, one could call it a night with a light but very tasty dinner. But being down south, the Shrimp and Grits were too tempting to pass up. Now this is the deal right here folks: $12 for a southern staple, with Georgia shrimp.

It all adds up at Seabear but on top of slinging quality seafood, the kitchen can really cook and all in all this place has fine dining caliber food that one can piecemeal on the cheap. So whether you do an oyster and Caesar salad combo or go all in on the Shrimp and Grits, if you are on a mission for more Cheap Eats Athens, put Seabear down on your list. 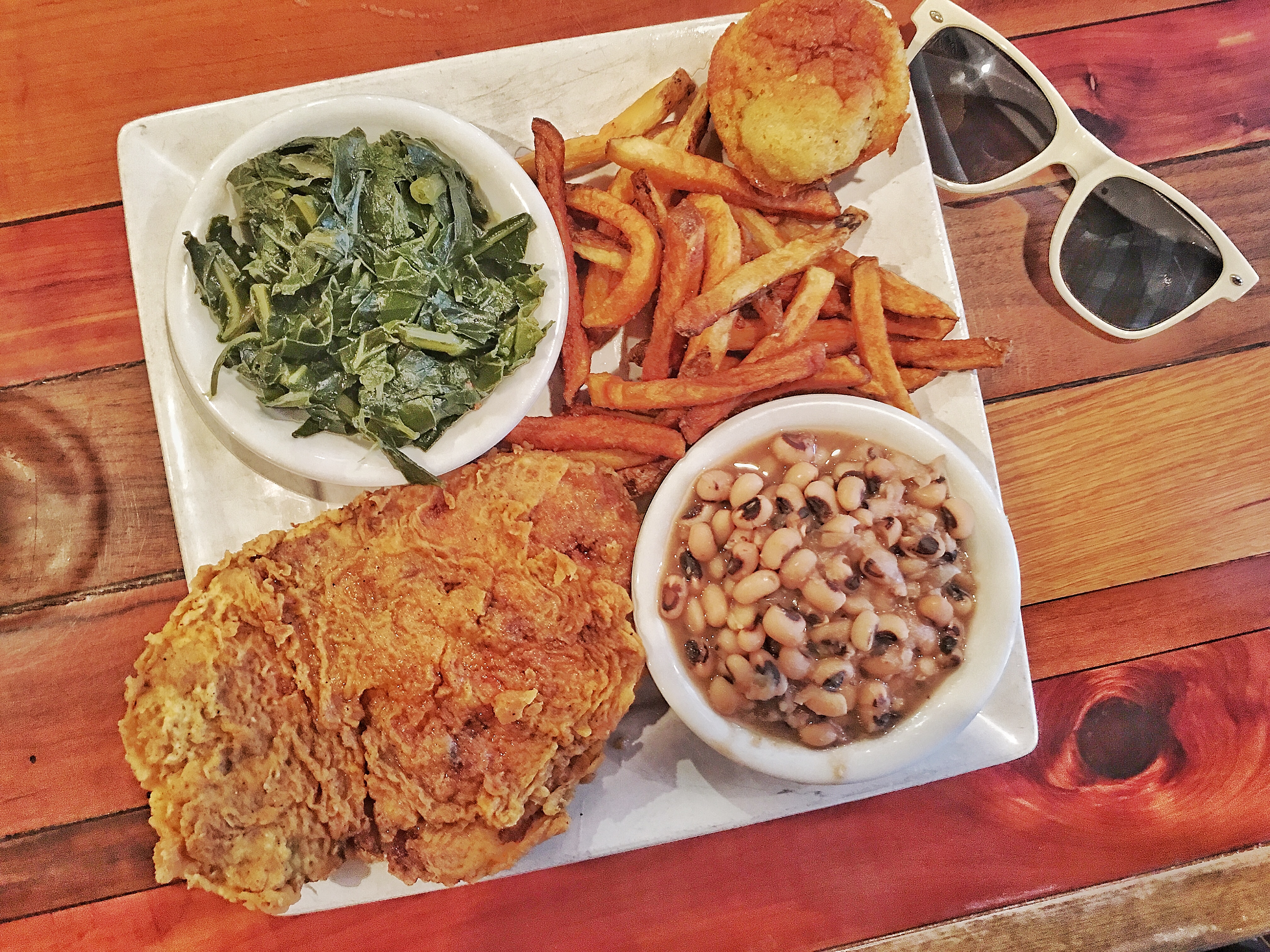 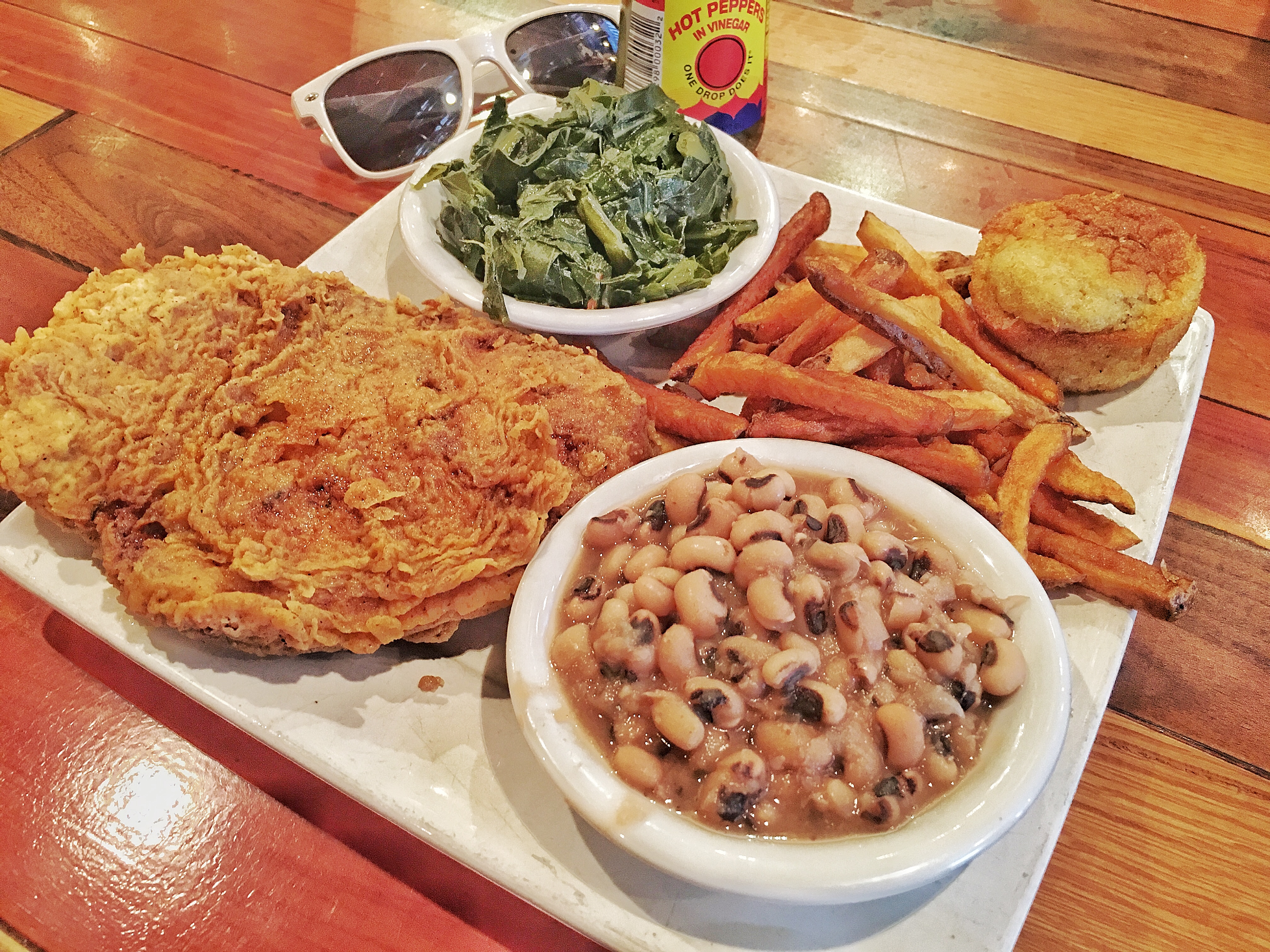 The Vitals:
the spot: The Place 229 Broad St Athens GA 30608
the eats: Meat and Three: Fried Pork Chop with Three Sides
the bucks: $10.50
the full nelson: The best fried pork chop I have ever had

Years ago I had a Veal Chop Milanese at a long since shuttered restaurant in downtown Los Angeles that had me rethink the superiority of pan seared over fried. I love a good medium rare anything(well maybe not chicken), so something done fried often robs me of that juicy bone in ribeye steak or double cut pork chop factor. That veal was an exception, where the classic Milanese preparation of pounding, breading and frying a Veal rib chop yielded a juicy chop plus a crunchy buttery exterior. And then I went to the Place in Athens.

Billed as a “relaxed Southern Eatery” one walks in expecting an accessible restaurant. A place trying to stay in the middle of the lane, banking that its prime downtown Athens location plus a full bar with a TV will appeal to all. These are the places that usually serve up food that’s just decent to good, but never #OMG. I rolled in a bit tuckered from the night before(thanks Seabear and your bourbon selection) and eyed the pork chop. I opted for it fried because, well, we are in the South right? The Meat and Three was calling me; collard greens, black eyed peas and fries seemed like the perfect sides. Plus how cool is it say “I’ll have the Meat and Three” when you are actually in the South? In general I love hearty greens and any kind of bean so I was happy on the side front(plus I needed the fries), but that fried pork chop? #OMG. Perfect crisp exterior and juicy as can be. And it was $9. If you  need more Cheap Eats Athens, then look no further. 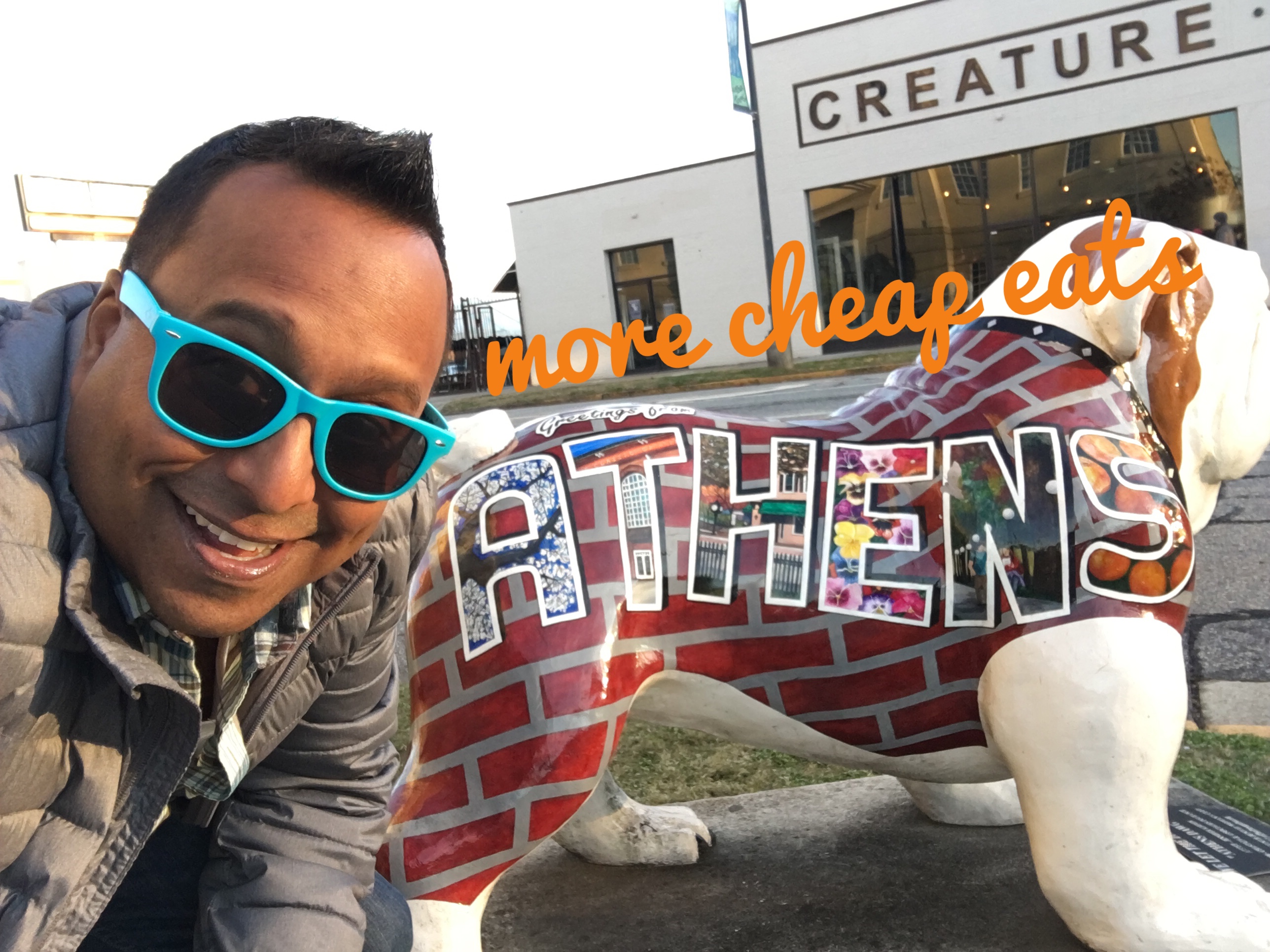 So there you go Cheap Eaters, two more must hits if you are in the market for more Cheap Eats Athens. I recommend the order of these meals as well. Go light and tasty at Seabear and then arise in the AM for a fried pork chop for your brunch needs.