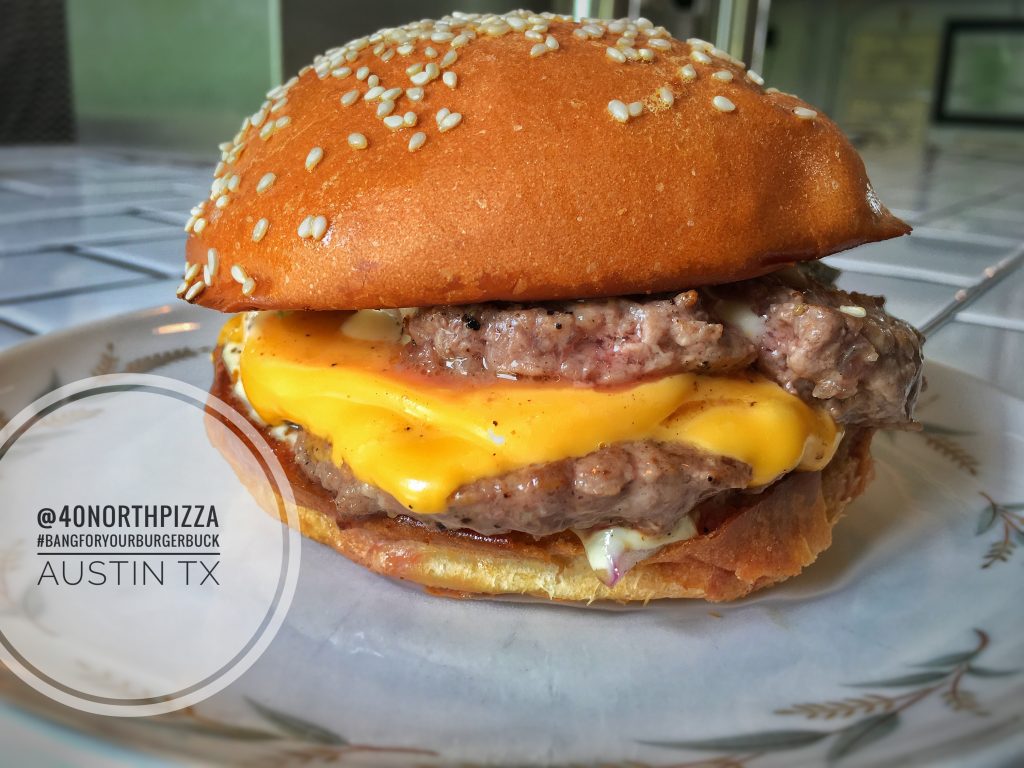 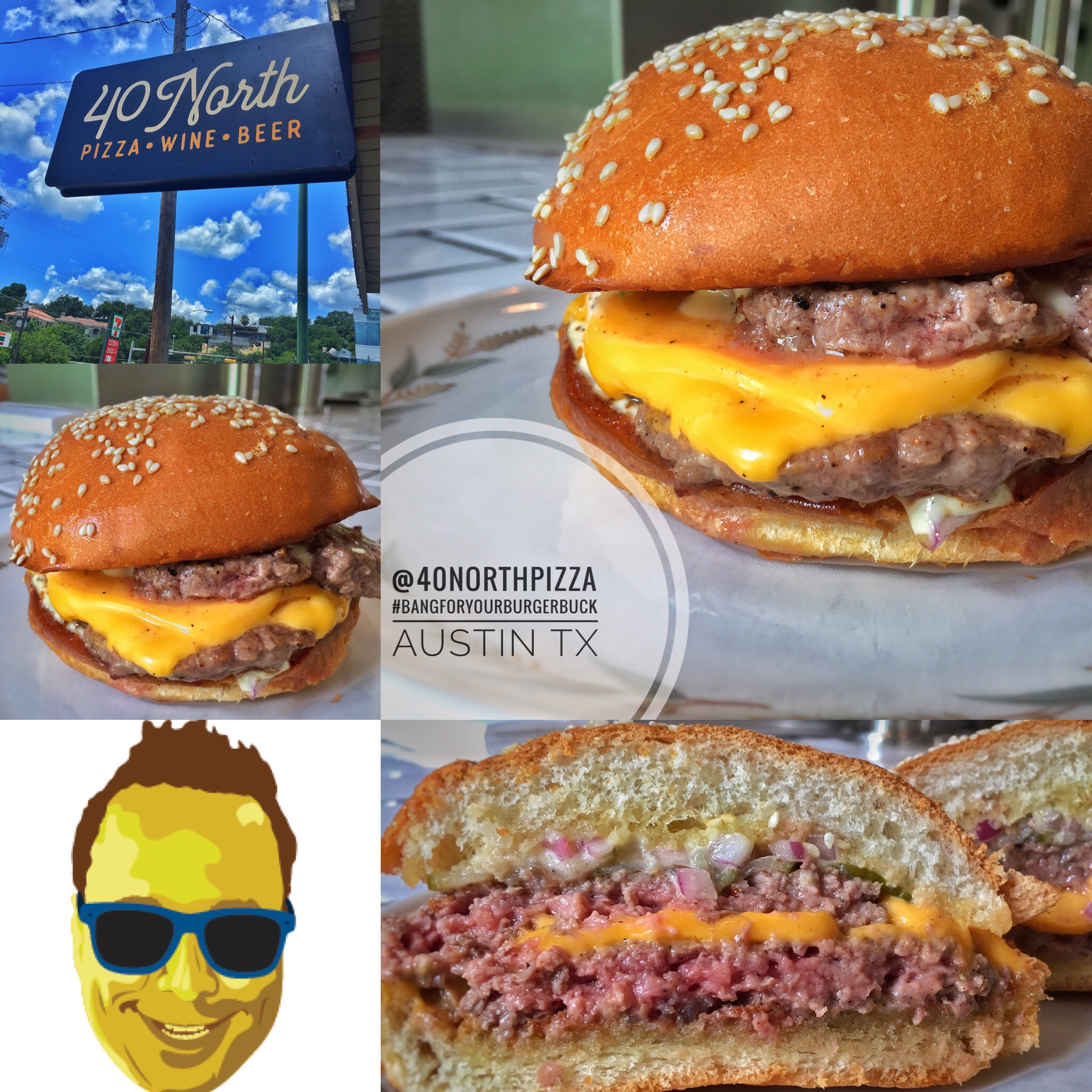 It might surprise you to learn that Austin TX has a respectable pizza scene, including the likes of Neapolitan, NY style, New Jersey Bar pizzas and Detroit style pies. Within that flurry of pizza know how, 40 North stands out with some very tempting sandwich options like a Porchetta(roasted pork belly) on baguette, a fried chicken sandwich and one damn good and good looking burger. The 40 North burger also commands a somewhat hefty price tag of $13.40. Does it deliver some Bang for your Burger Buck? Read on to find out! 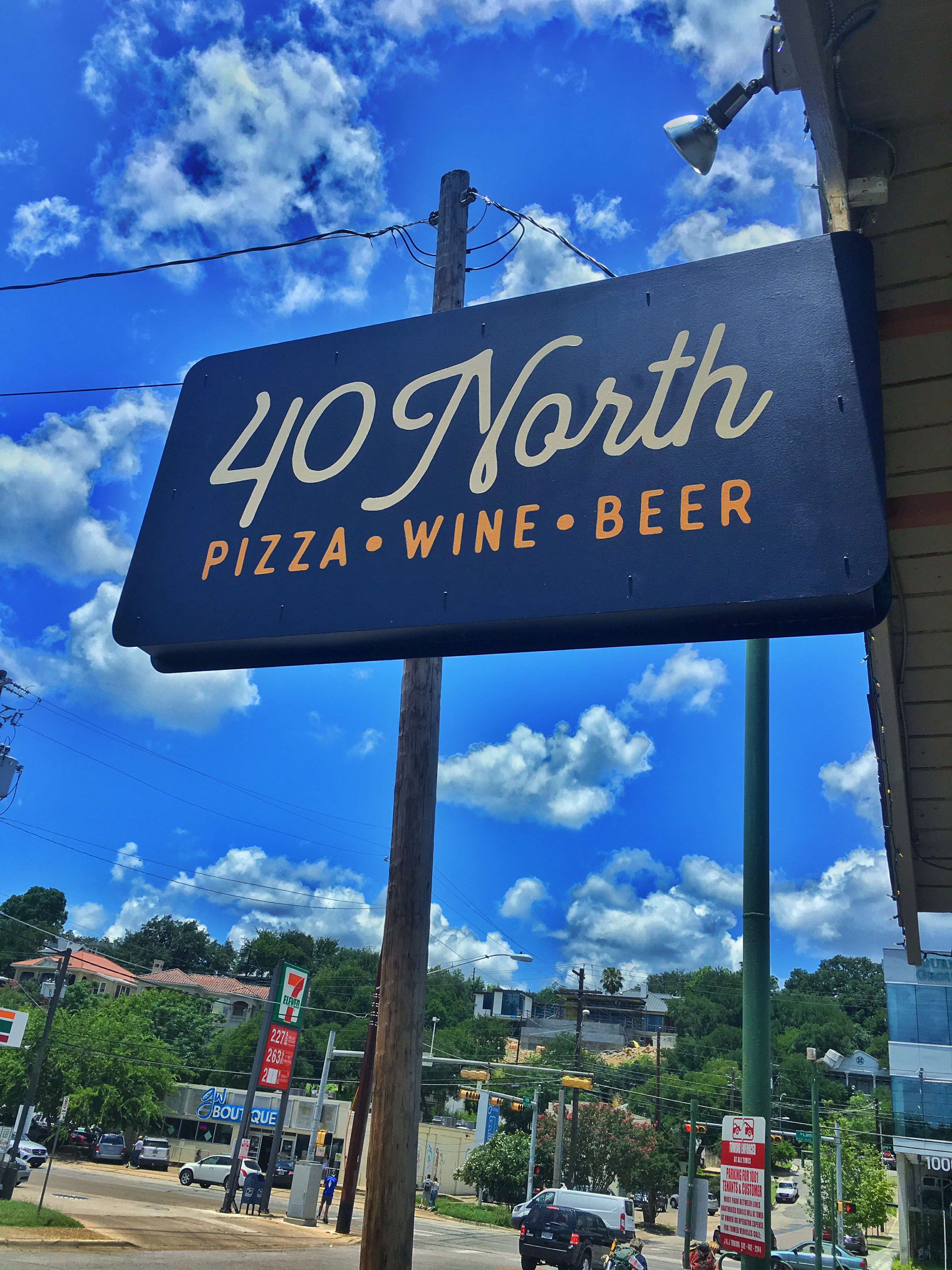 As far as pizza goes, 40 North is gonna come at you with the Neapolitan style, a kind of pizza that I have really taken to as of late. These pies are kinda fancy and delicate in my opinion. Not the kind of pizza you are looking to take down around 2am. Regardless of whether pizza should be consumed in a drunken stupor, the pizza at 40 North is definitely worth a try and worth the bucks as these kinds of pizzas don’t often come cheap. You’re also paying for some pizza pedigree, prior to opening 40 North as a food trailer, Clint Elmore studied pizza making in Naples and Paulie Gee’s in Brooklyn. As far as the burger goes . . . well looks like Clint ain’t just a one trick pizza pony . . . 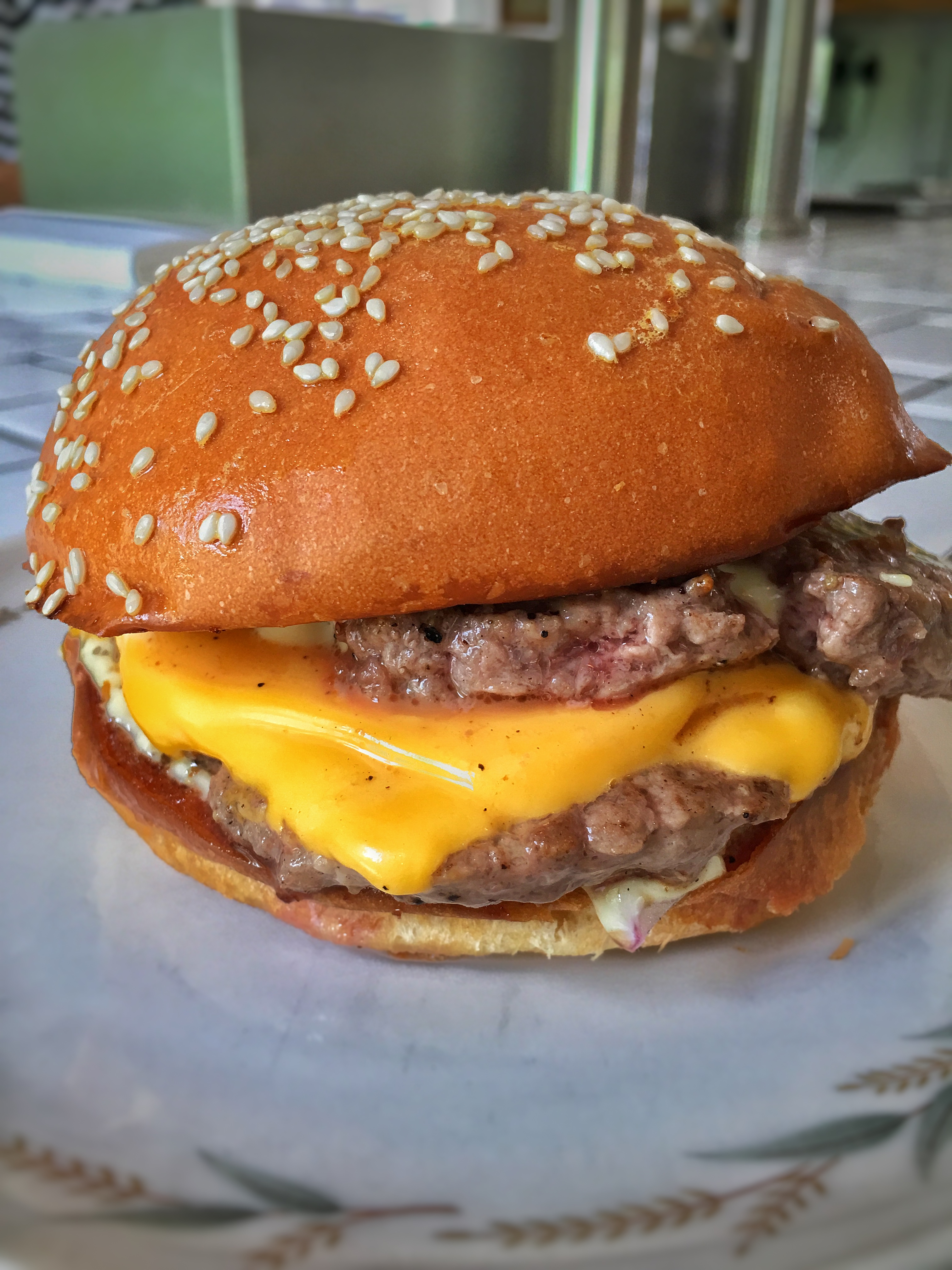 Two 3 oz patties with three slices of American cheese pretty much anchor the concept of the 40 North burger: a double cheeseburger for grown ups. There is also pickle and chopped raw red onion as well. The menu leads me to believe that there is a mustard aioli as well but to be honest, I really didn’t detect much of any sauce. If you have been reading my burger reviews since the Los Angeles days, you know that I am a whore for Thousand Island dressing. I don’t think the 40 North Burger needs Thousand Island but it does need something to counter the creaminess of the three slices of American cheese and the big beef hit of two 3 oz patties.

If you’re looking closely, you’ll notice those patties looking darn juicy . .  like almost dripping with jus. Well, if you happen to reach for a knife and cut into the 40 North Burger . . . it’s gonna look like this: 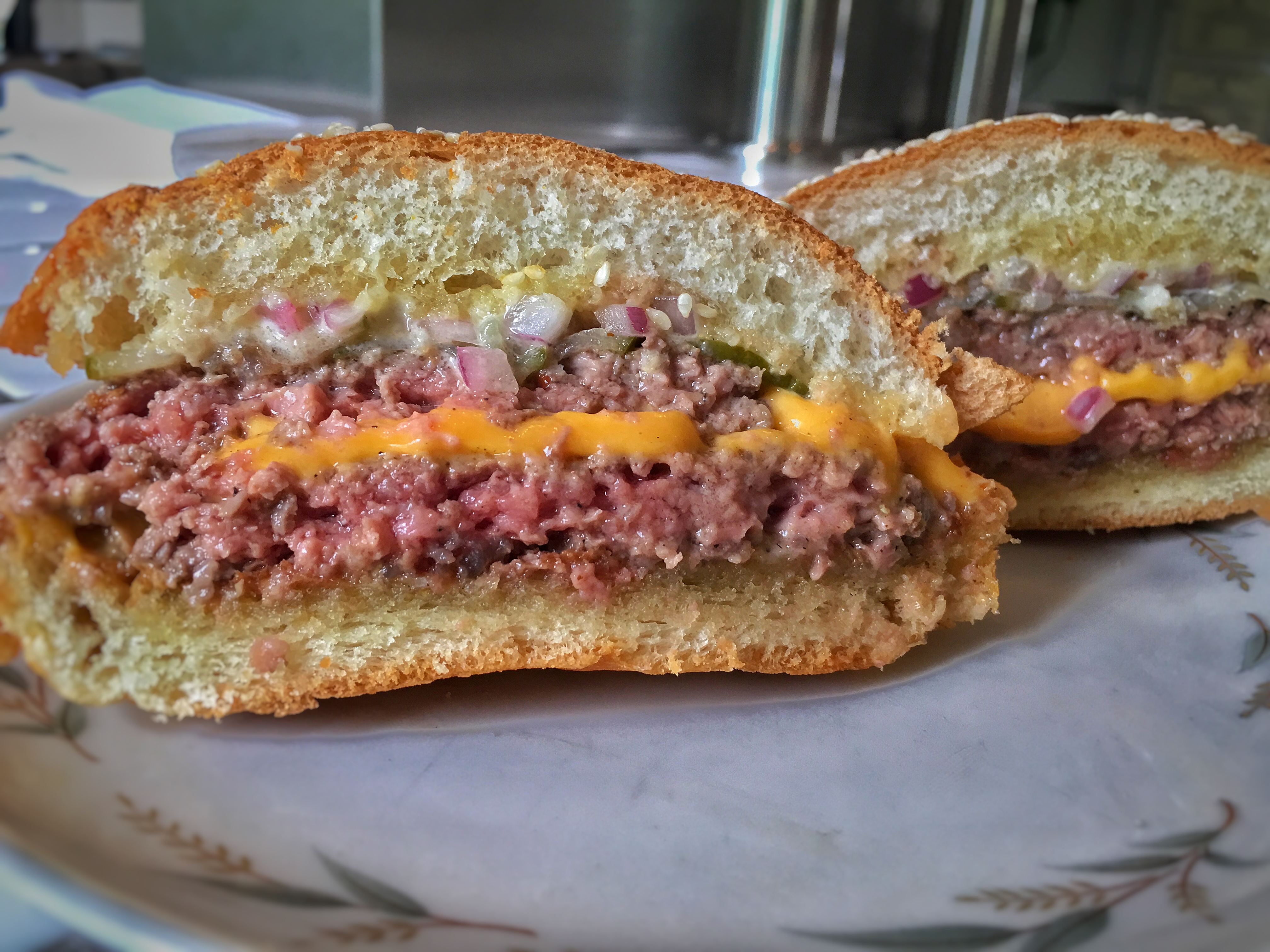 I requested a medium rare on my 40 North Burger and it almost came out a hair under done, BUT the steak tartar effect of mid rare to rare beef mixing it up with the chopped red onion and the brine from the pickles is WELL WORTH IT. For the record, I did try one cooked more thru  – 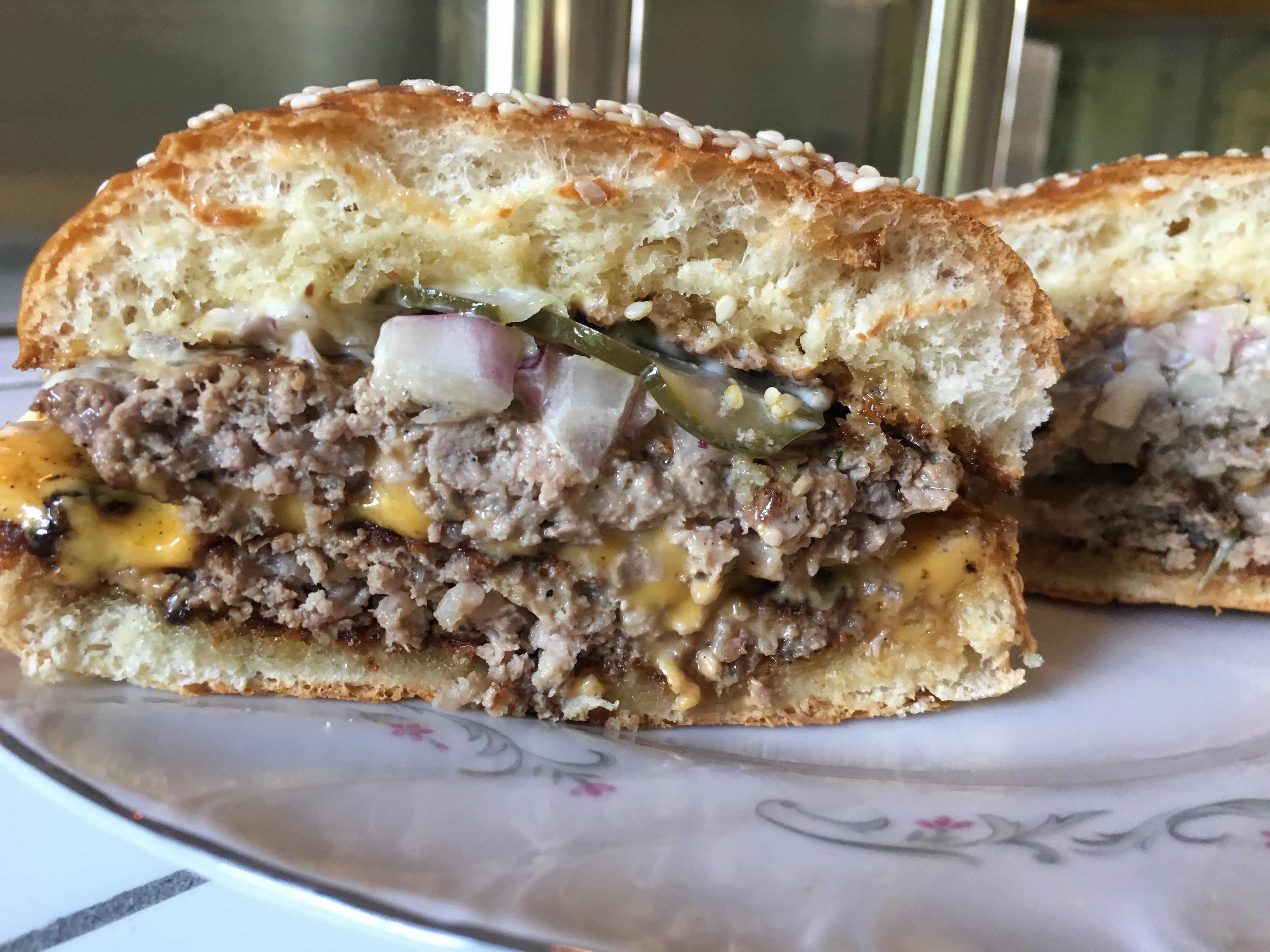 Disappointing to say the least. Do yourself a favor and get the 40 North Burger medium rare and savor the interaction of raw red onion with a burger cooked like you were at a steakhouse. The bun is damn near perfect, super soft, high quality and the sesame seeds seem like perfect call with a double cheeseburger style burger. 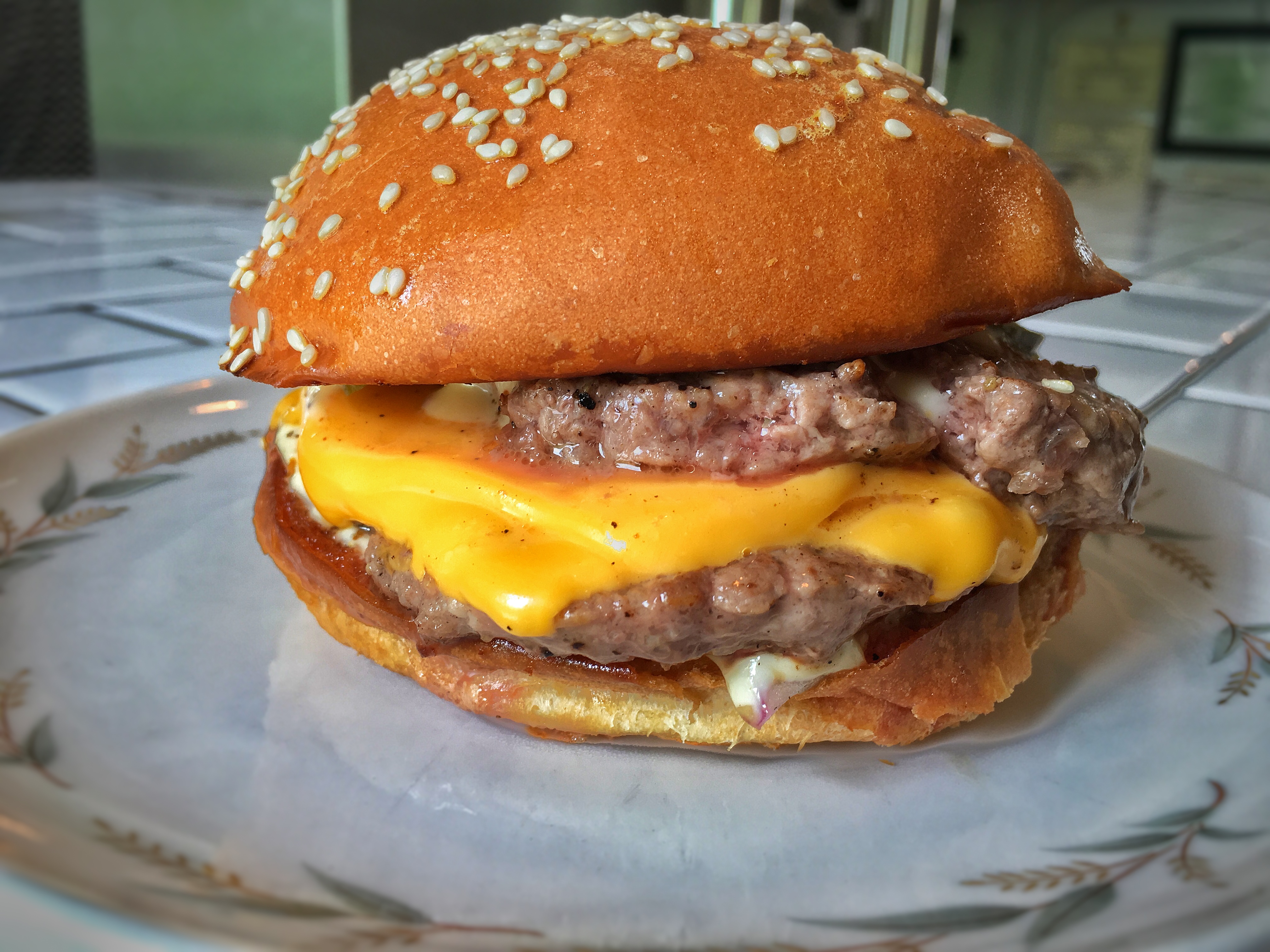 One last hard question remains: is this burger worth almost $14? It does come with a salad or chips but I was interested in neither. This burger goes down quick and not because it’s small but because once you take that first bite, you’re just not gonna want to stop. If you’re a die hard about your burger experience being a classic American cheeseburger experience, then the 40 North Burger is for you and worth the money. For myself, at that price, I like to see a Gruyere get thrown into the mix. It was a close call but I would go back for the 40 North. It’s not the best burger deal around but by far the best use of red onion in a cheeseburger I have found to date. And that’s worth my $13.40 right there.