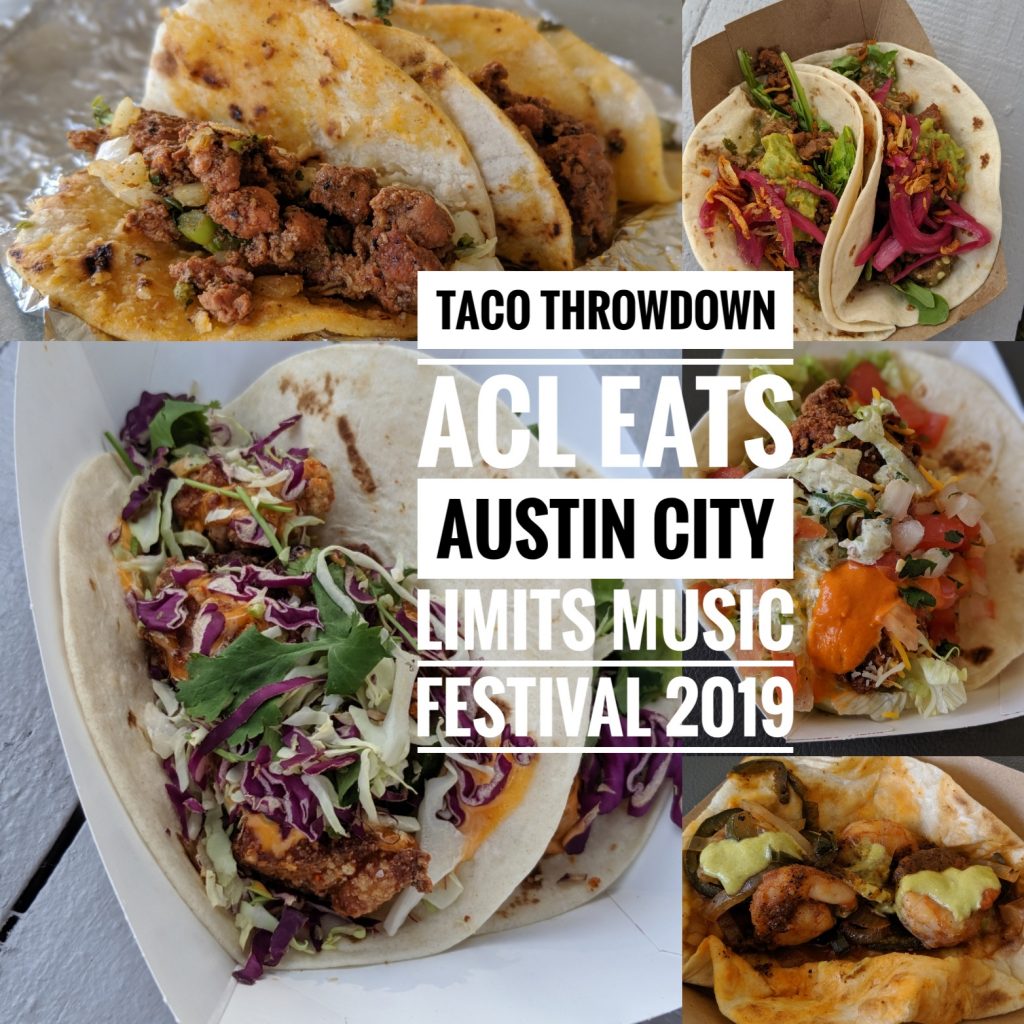 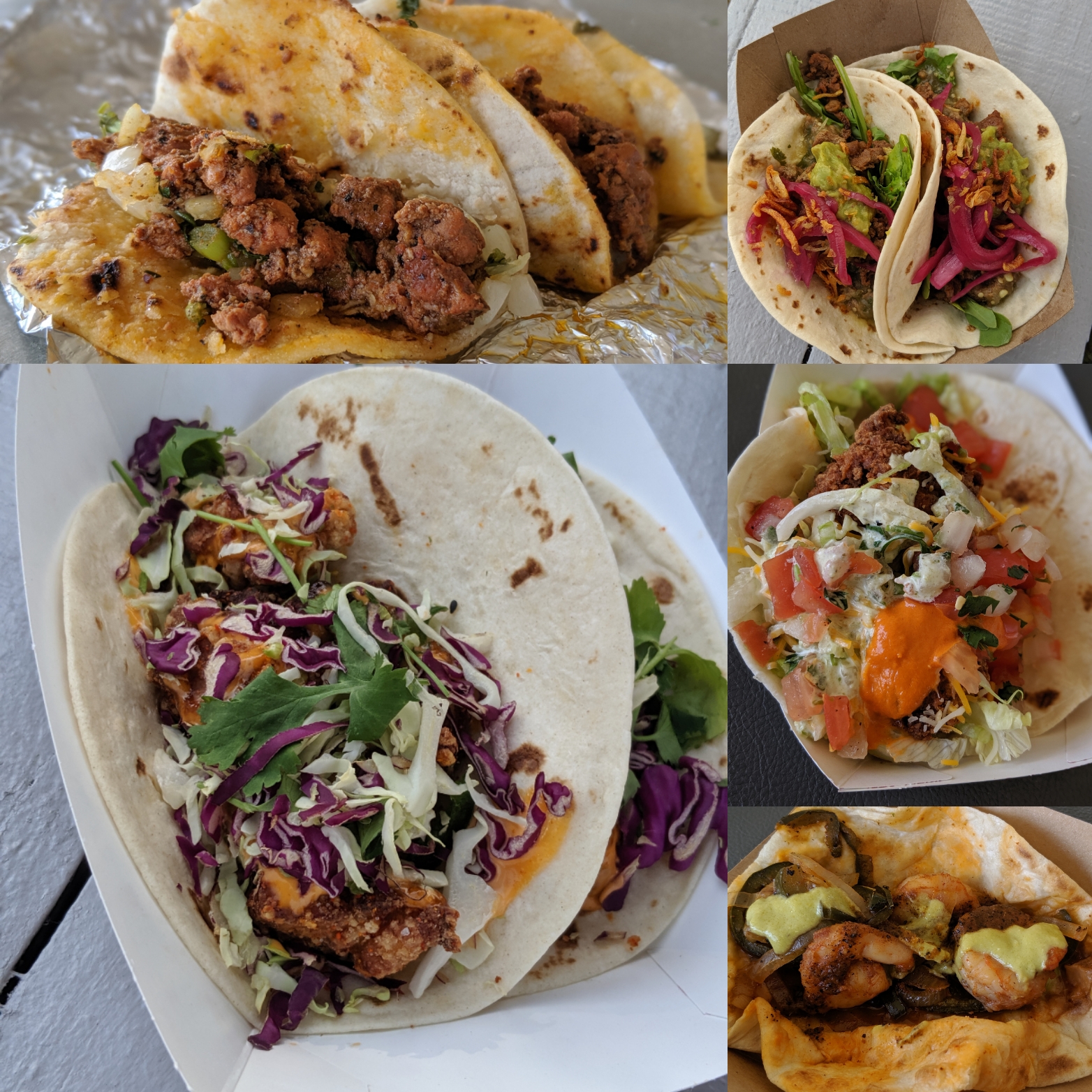 ACL Eats is as a big draw as the music is for the Austin City Limits Music Festival. My last post was all about burgers and this one  . . . is all about the tacos. Now Austin has a rep for “keeping it weird” and some of the more noteworthy do just that. Torchy’s Tacos rethinks comfort food in a tortilla, East Side King brings you Asian street food in a tortilla and Taco Deli slings it farm to table via a tortilla.

Still, out of 5 taco offerings at ACL Eats, only one is straight up street tacos. A bit surprising, even for unconventional Austin. So which taco took the cake? Read on and find out! 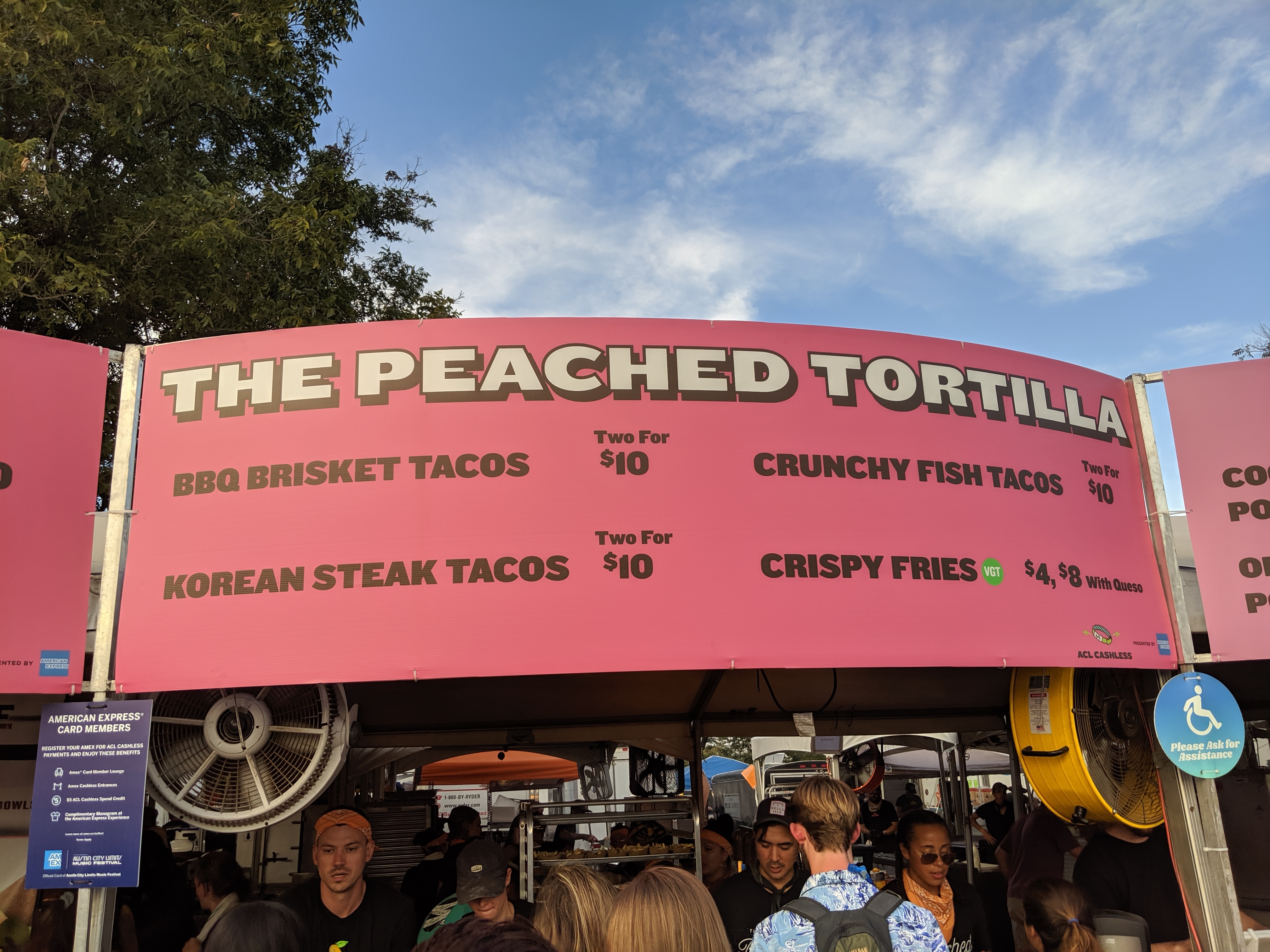 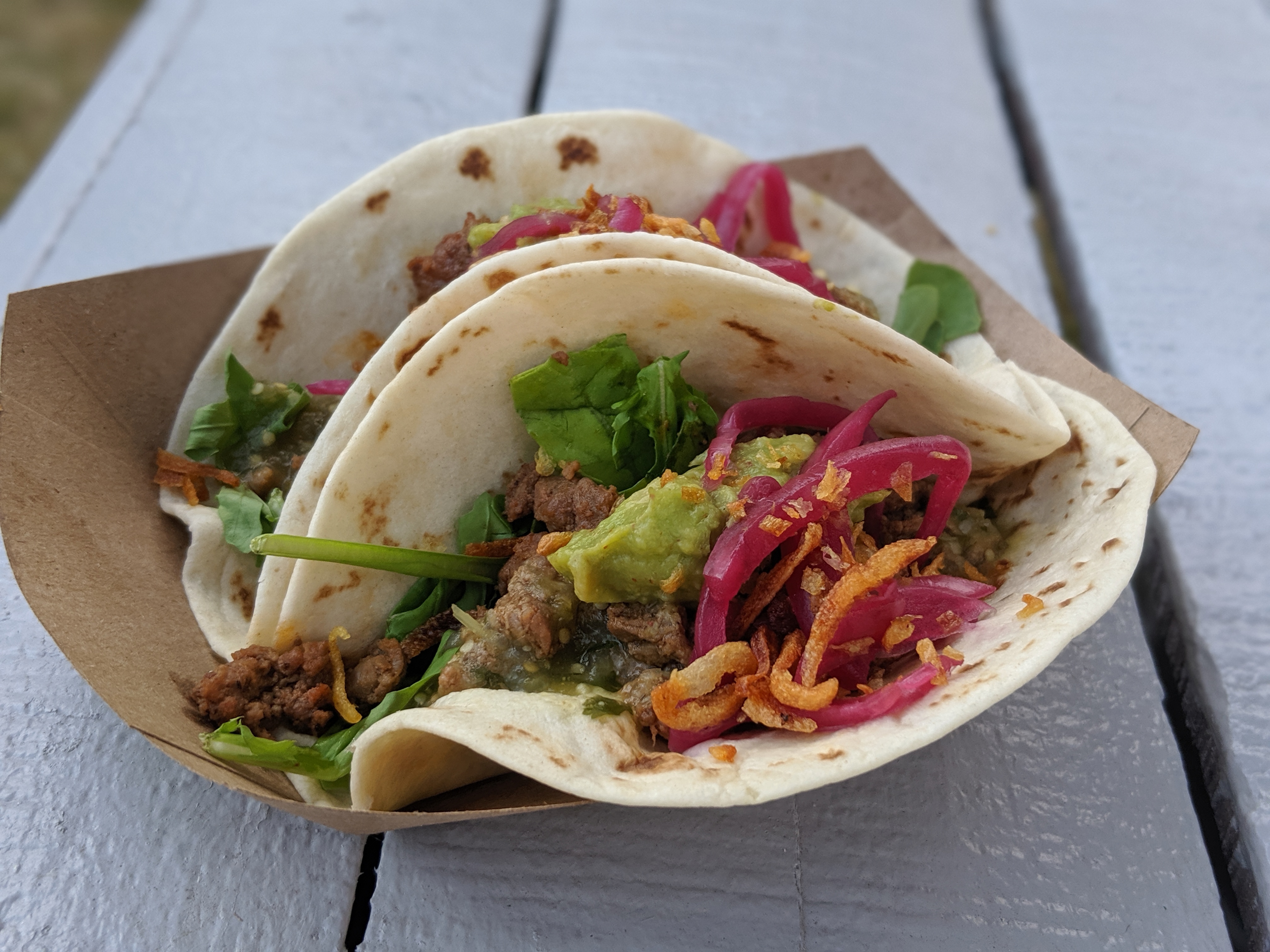 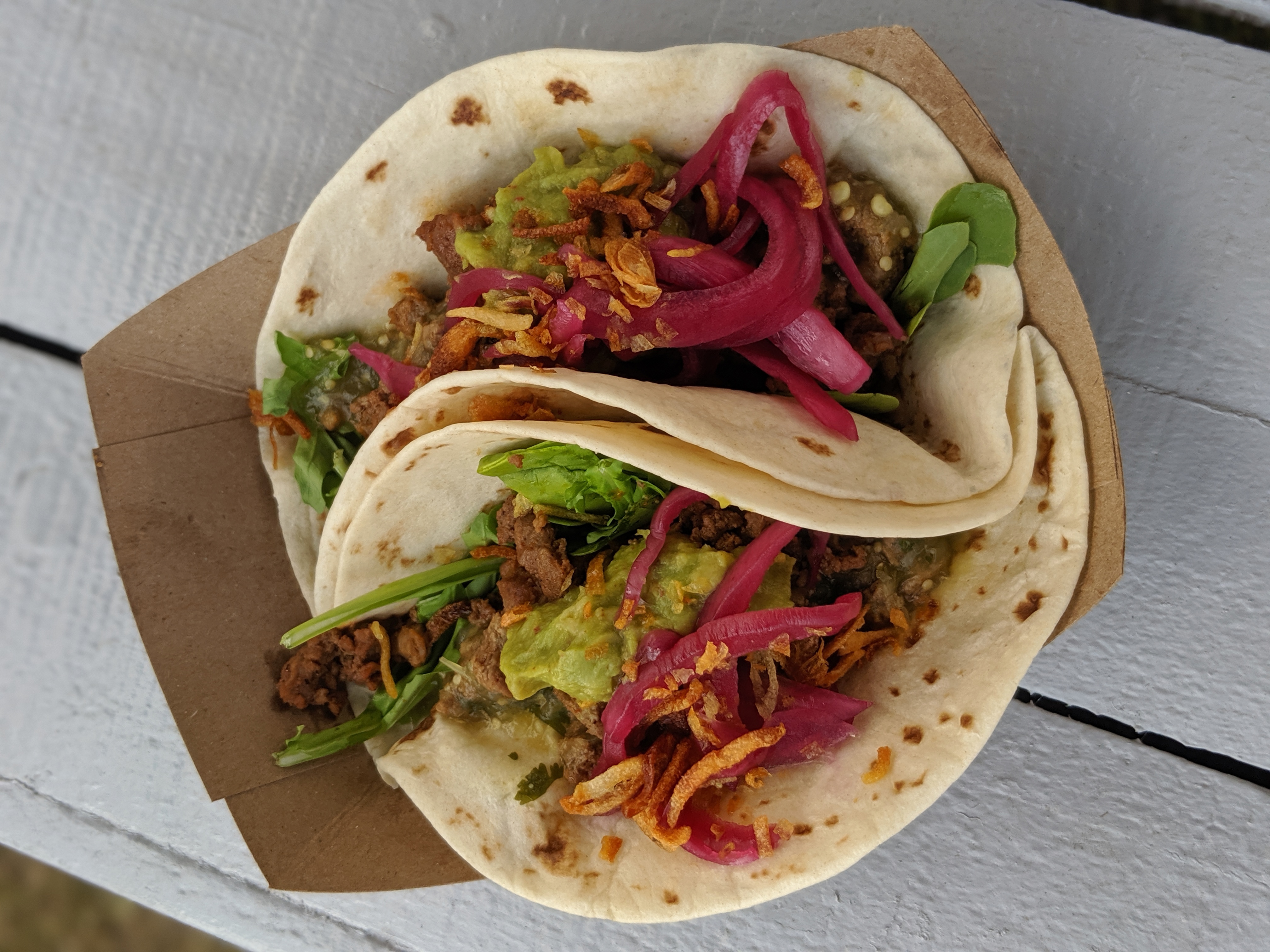 The Vitals:
the spot: The Peached Tortilla 5520 Burnet Road Austin TX 78756 // at the ACL Eats Main Food Court
the eats: Korean Steak Tacos
the bucks: $10 (for two)
the full nelson: Not all Korean Tacos are created equal.

Korean fusion tacos have been the rage since modern food trucks came on the scene thanks to Chef Roy Choi and his Kogi Taco Truck. I have to admit when I first tried Kogi, I realized that I was creating these very same fusion tacos whenever I had leftover bulgogi in the fridge and some extra tortillas in the pantry. Oh, what could have been had I owned a taco truck and an entrepreneurial spirit . . .

So when I came across The Peached Tortilla, I went for the Korean steak as an ode to the Kogi taco days. I don’t think Roy has anything to worry about though, as these tacos fell flat. The avocado didn’t jive with the flavors in the marinated steak and the steak was beyond marinated, more like macerated, totally lacking in the texture department. My biggest grievance here, and Peached Tortilla wasn’t alone here, were the disappointing flour tortillas. I am a self admitted corn tortilla guy but I have been impressed here and there with freshly made flour tortillas. Not the case here. I like Peached Tortilla’s brick and mortar restaurant but their tacos at ACL Eats were a let down. 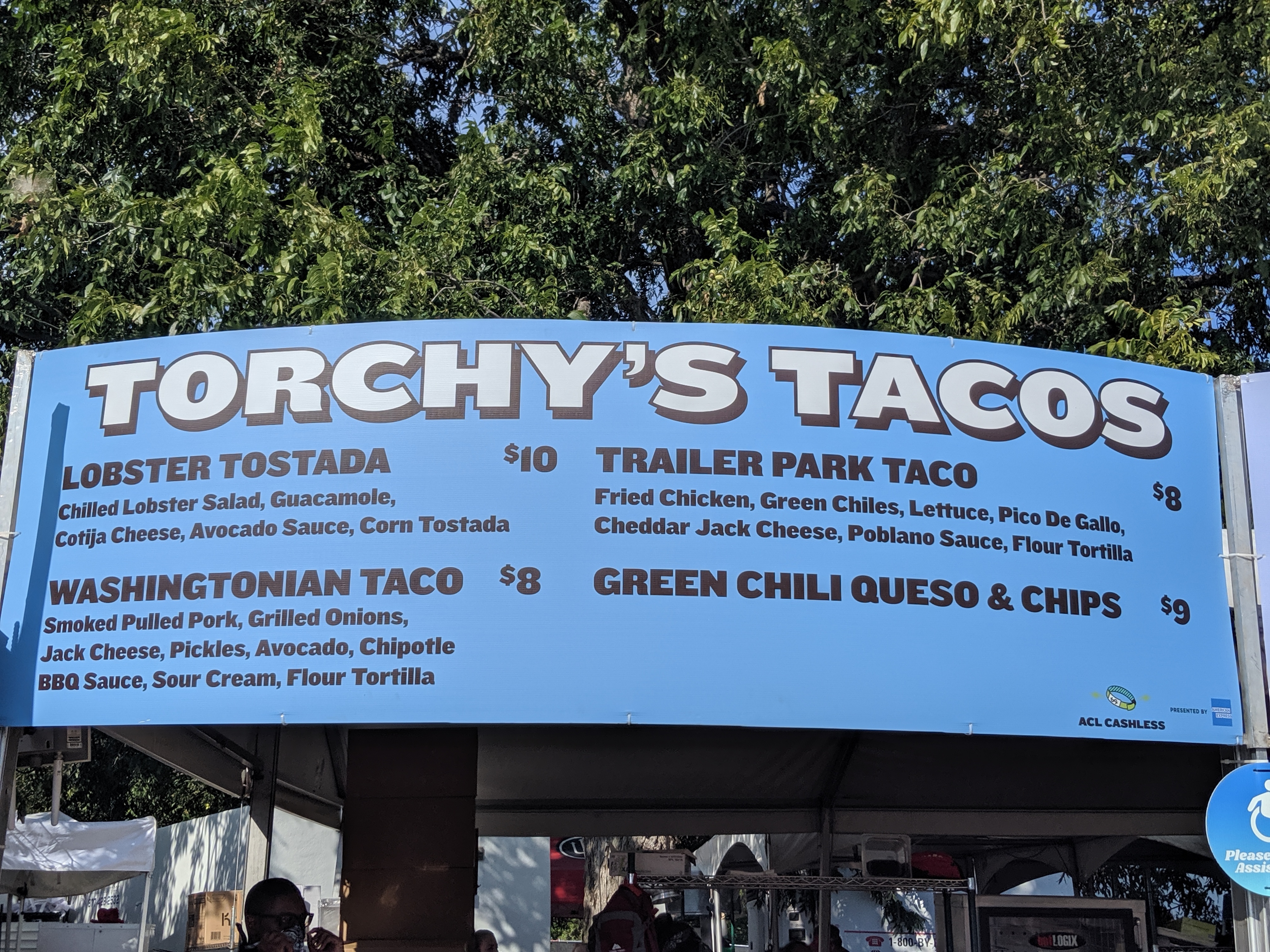 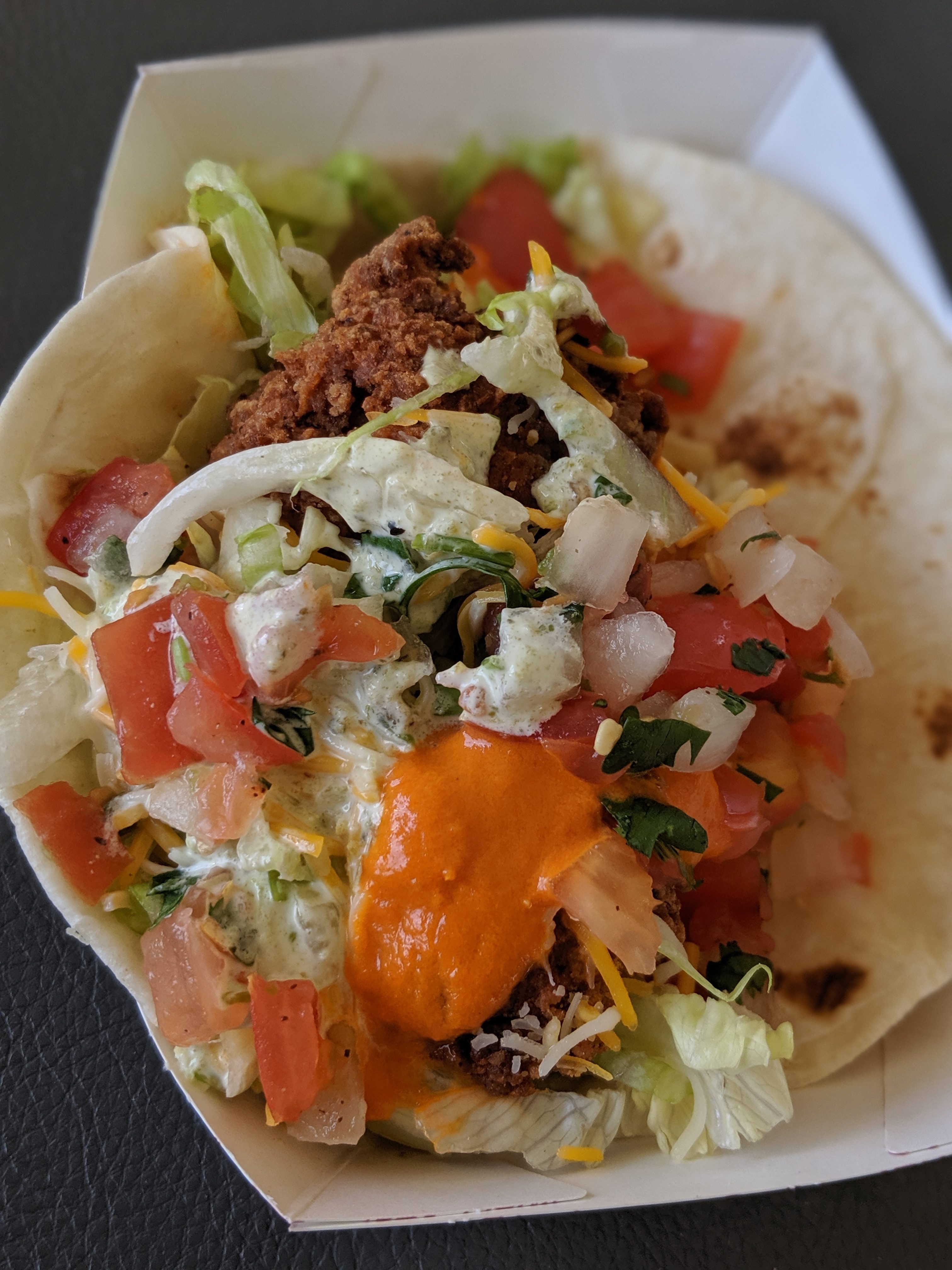 Torchy’s Taco started out as a one off in Austin and can now be found in four states. It’s not quite Chipotle big but a chain can dream, can’t it? Its success lies in the fact that they please a broad spectrum of people, even finicky ex Californians craving something remotely authentic. If you didn’t catch it, I was talking about me and my go to: the barbacoa taco. That taco plus a craft beer makes for a respectable lunch in my book.

Now anything named “Trailer Trash” is not respectable, nor is it trying to be. I could say that shredded lettuce doesn’t belong on a “real” taco but this taco isn’t aiming to please cab drivers in Mexico City. I have to admit, I enjoyed this taco up until the heartburn that hit me after finishing it. And even then, I understand why this taco is there. People are gonna like chicken tenders in a tortilla(another bad flour one I might add). Though it is just one taco for $8, it is pretty hefty. If you have never had Torchy’s, put on a track from Kid Rock and try this taco. On second thought, you can skip the Kid Rock part. 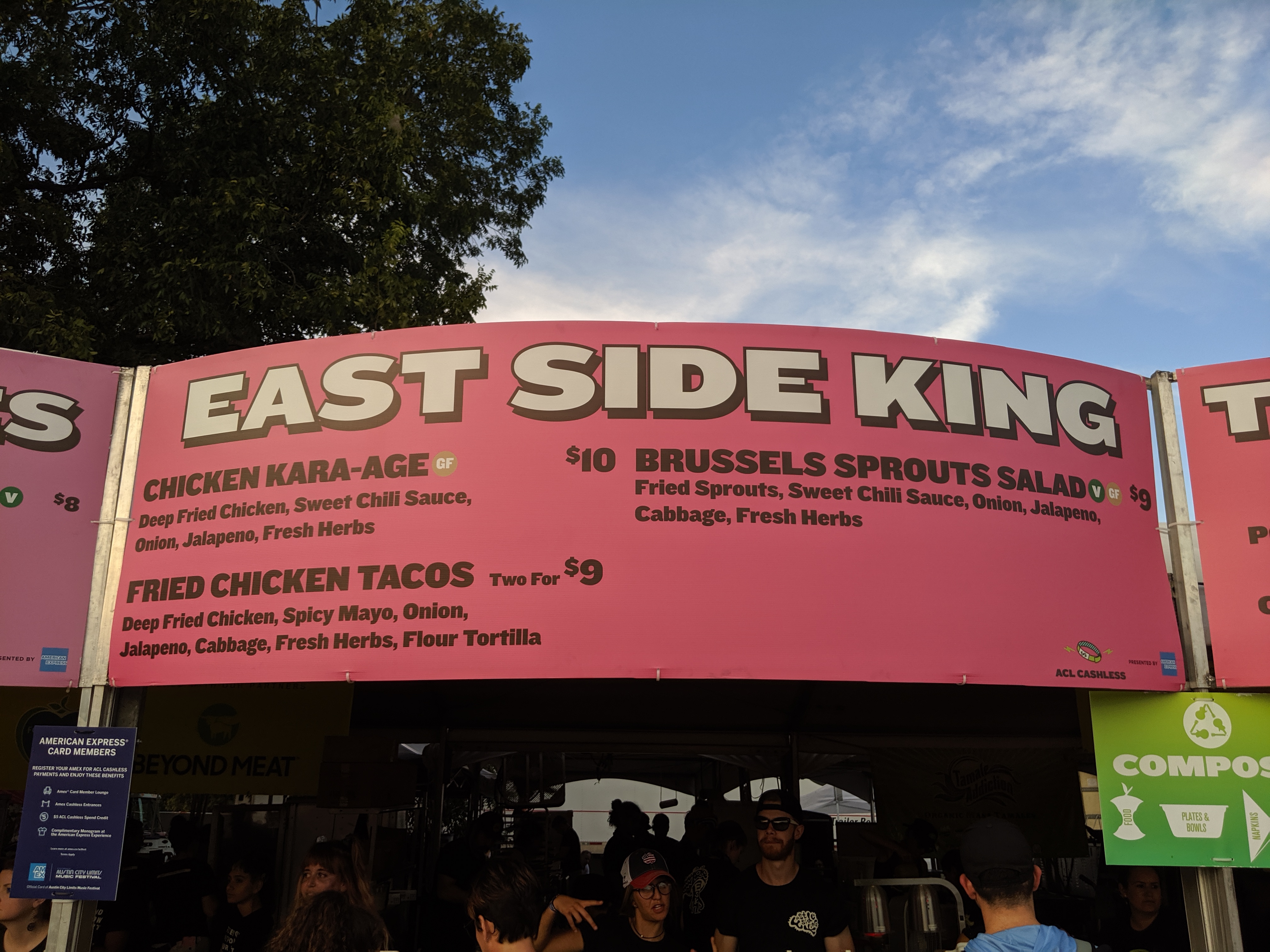 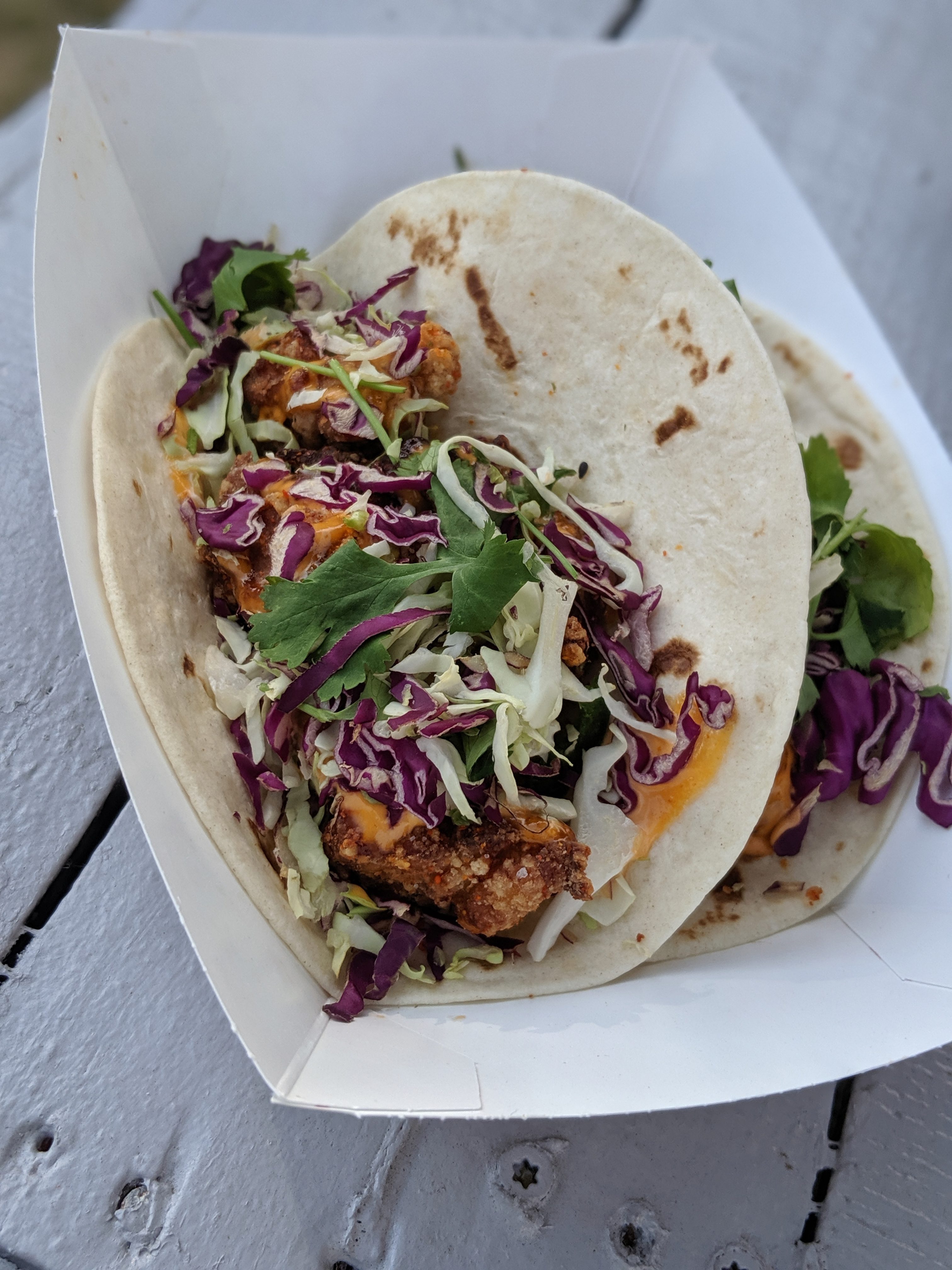 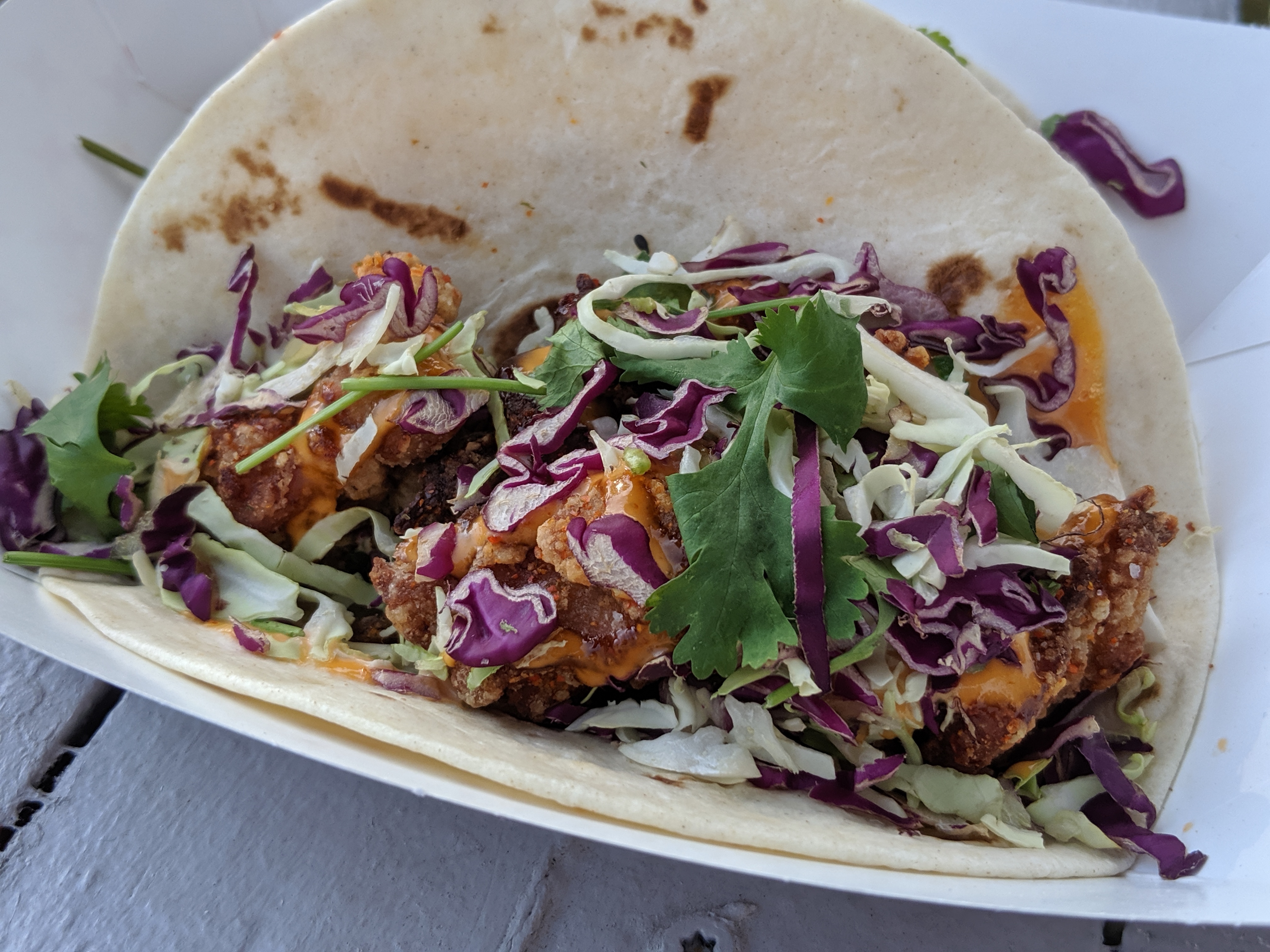 The Vitals:
the spot: East Side King two locations in Austin  // at the ACL Eats Main Food Court
the eats: Fried Chicken Tacos
the bucks: $9 (for two)
the full nelson: Japanese street food in a tortilla

Do some digging online and you will learn two things about East Side King. One is that they were one of the first food trucks in Austin to draw in some national hype. The other is that the chef behind it all, Paul Qui, winner of Top Chef, has had his share of problems, like assaulting his girlfriend(charges dropped) and steering a restaurant empire known for closures rather than openings.

I’m gonna remove the controversial chef out of the equation and say this: East Side King serves tasty food, like the Brussels Sprouts and I am a sucker for their Karage(Japanese fried chicken). If not for another bust of a tortilla, this taco might have been the taco to try at ACL Eats, but alas, even sweet and crispy fried chicken can’t save a taco that is saddled with a tortilla that came out of a bag. You might want to stick to the fried chicken boat and def get the sprouts. 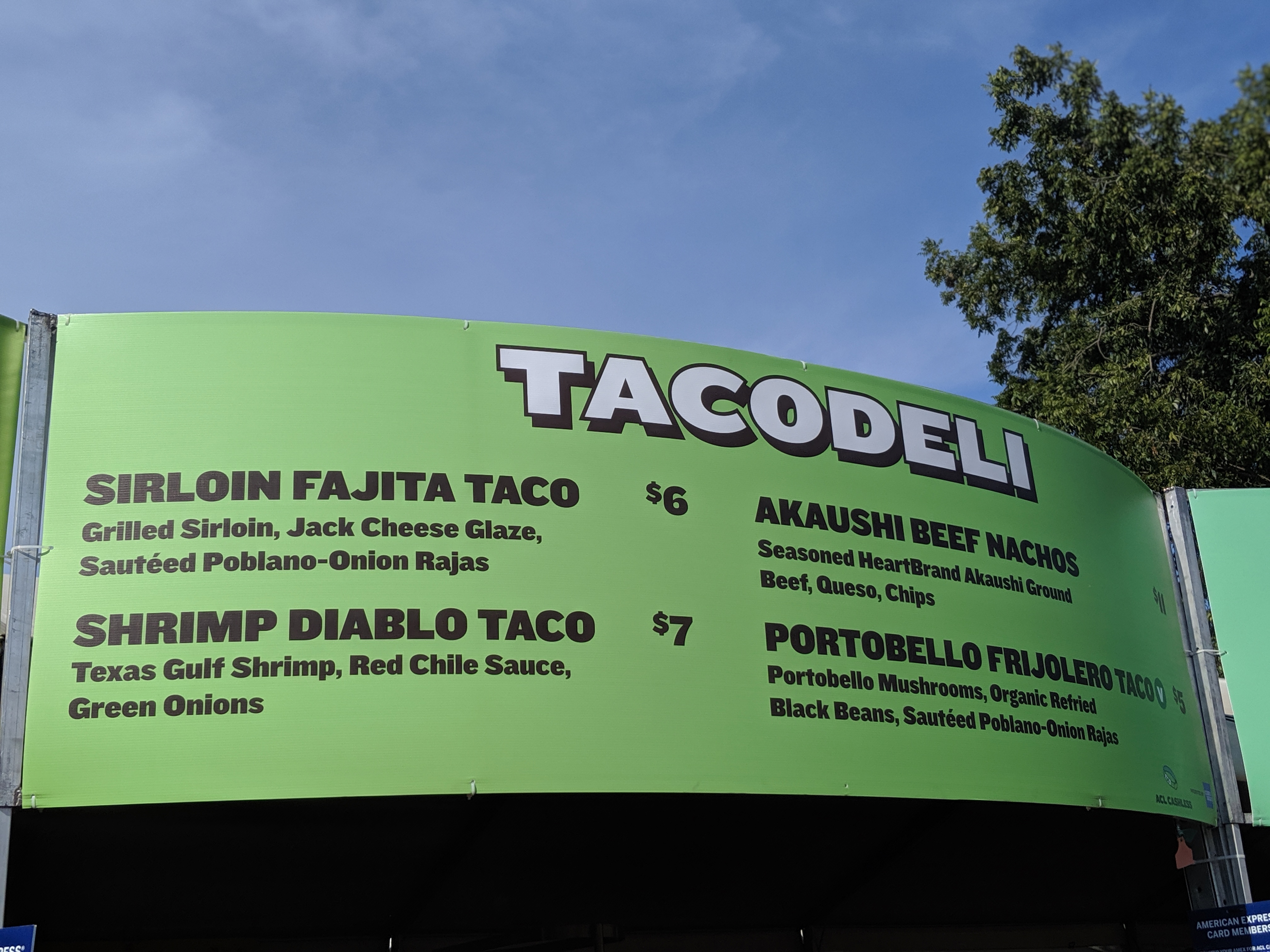 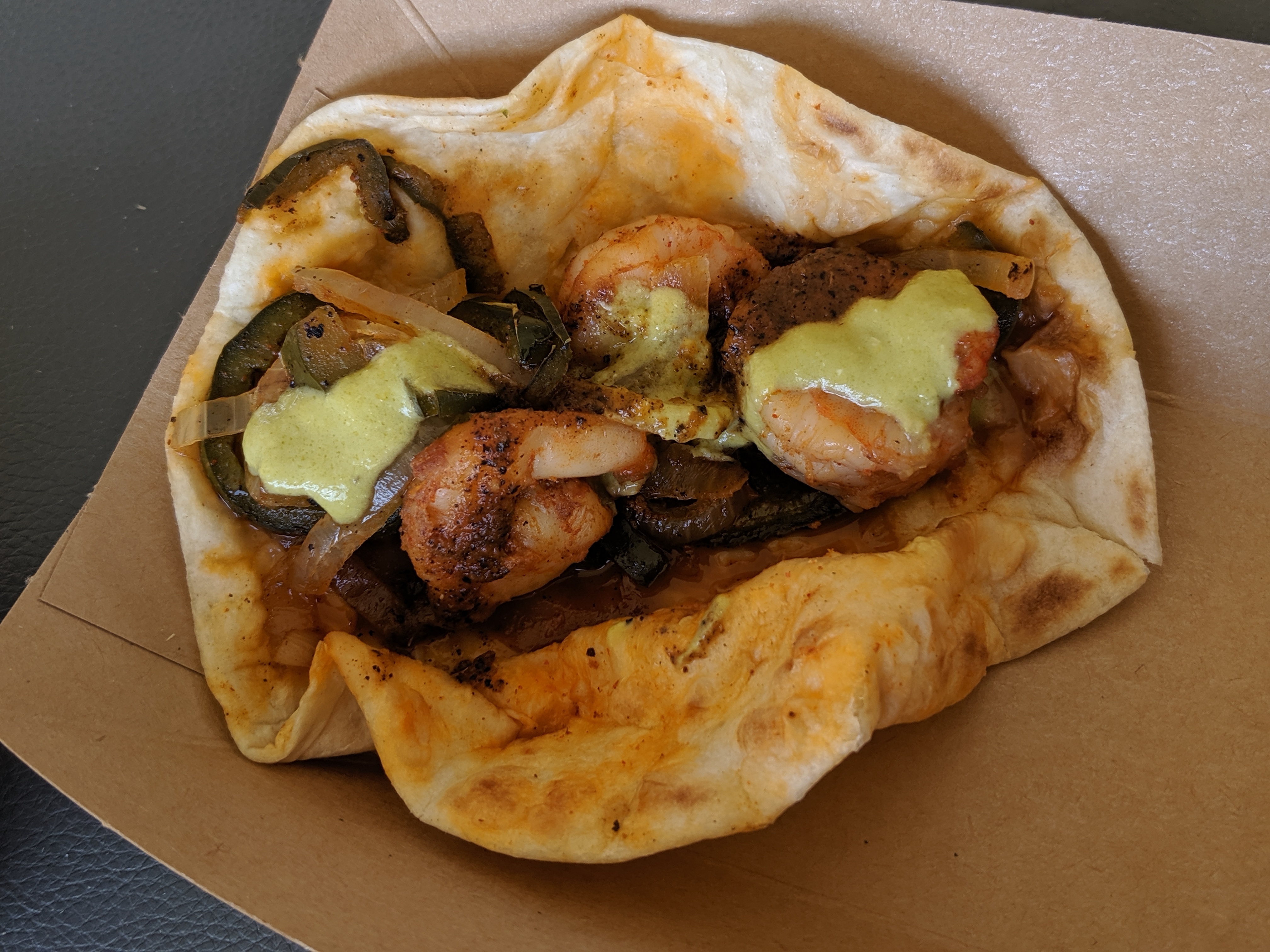 Do some research into taco scene in Austin and Taco Deli should be right up there with Torchy’s as a “must visit” kinda place. If you find yourself at their brick and mortar in the AM hours you would be hard pressed not to get their Otto taco, a modest mix of bacon, beans and cheese that has become one of my top breakfasts of all time. Some places might have bigger tacos but Taco Deli serves up quality ingredients and when it comes to their tortilla game . . they deliver even in a festival environment like ACL Eats.

I had both the steak and shrimp and while you can’t go wrong with either . . . well cooked juicy shrimp is a find at a restaurant let alone a food court. These tacos aren’t cheap, I could easily eat three of them but you know what? They are also good enough to splurge on. You get what you pay for, and they served up the best tortilla at the Fest: hands down. 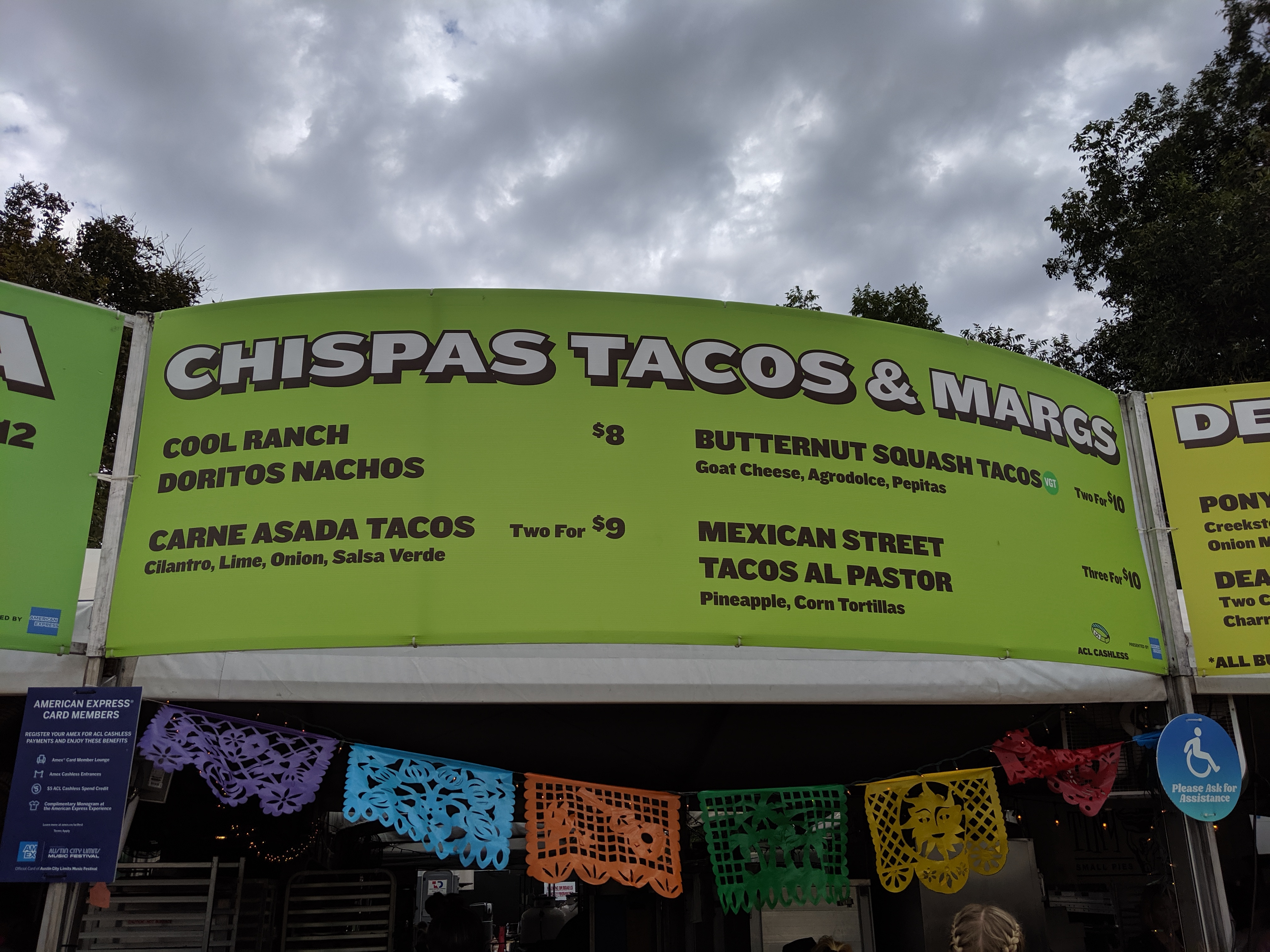 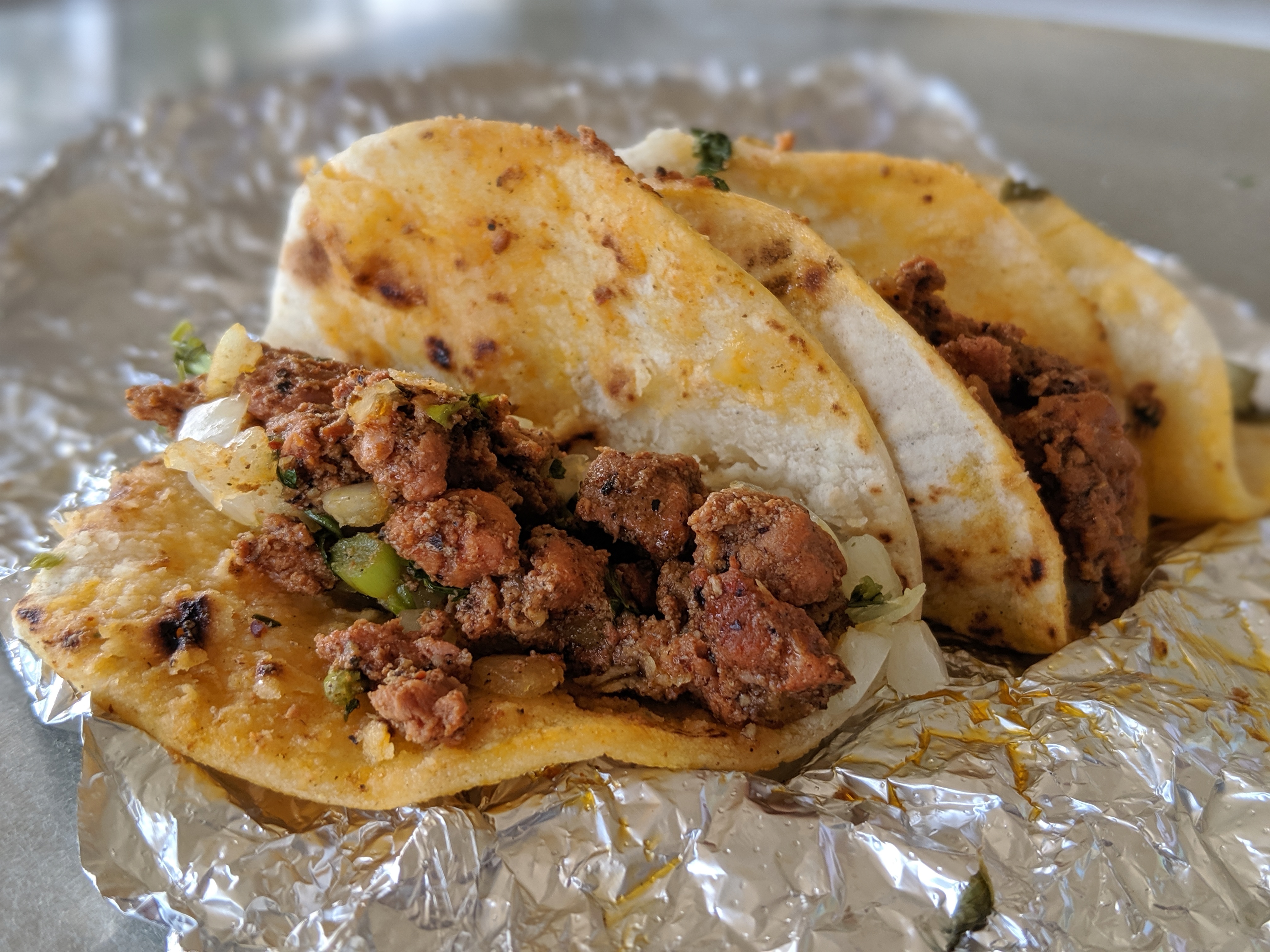 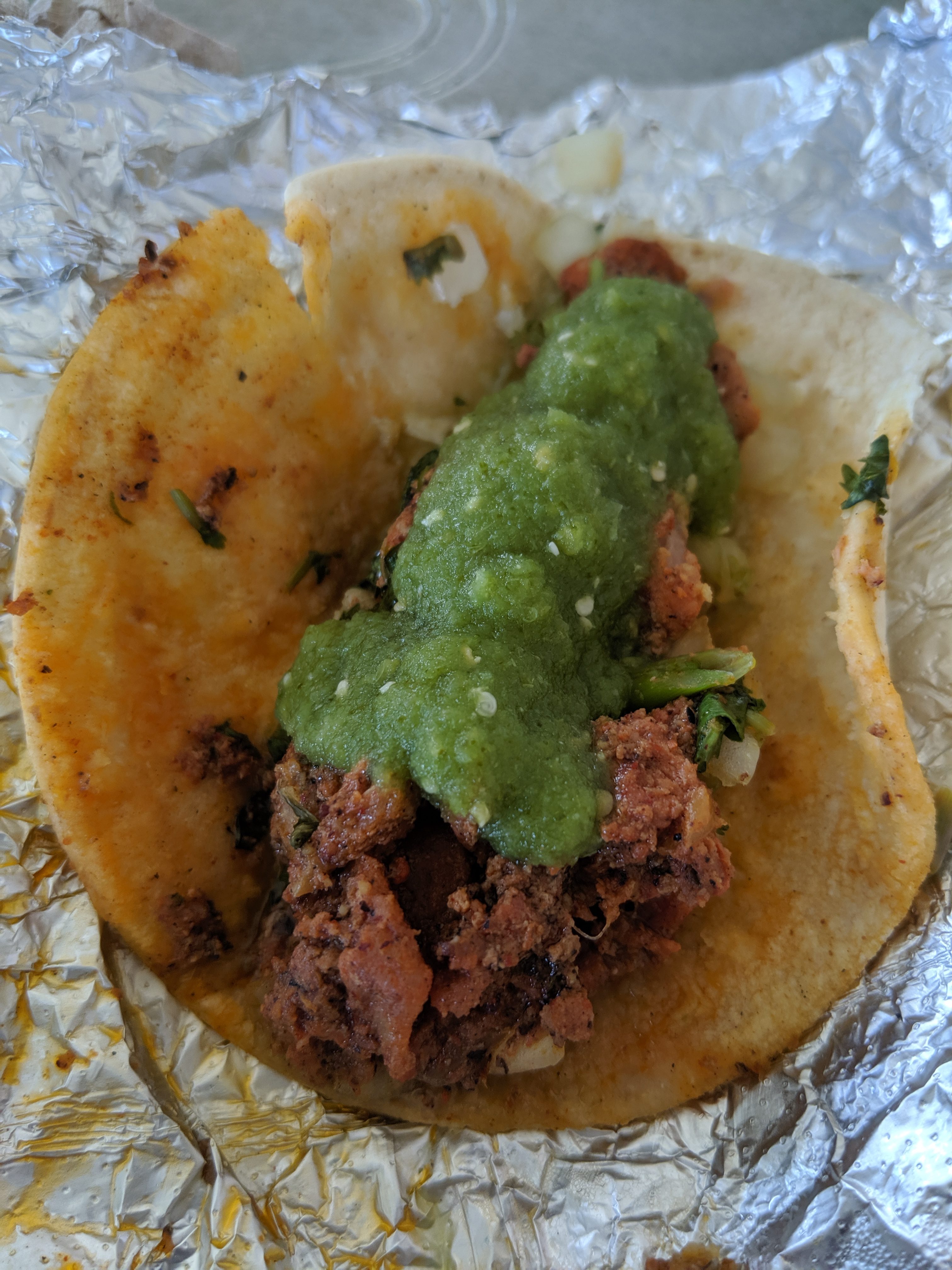 The Vitals:
the spot: Chispas Tacos and Margs 214 W. 4th St. Austin TX
the eats: Al Pastor tacos
the bucks: 3 for $10
the full nelson: when you crave street tacos at ACL

I don’t know how I missed Chispas Tacos and Margs on my first forays into ACL Eats but there they were offering exactly what I thought was missing from ACL Eats taco line up: street tacos. I have not visited their brick and mortar location in downtown Austin but that is merely a matter of time. These are true street tacos though it is tough to judge them in the festival scenario where the food is made in advance. One interesting side note is that the cilantro stem takes on a hearty green like texture somewhat similar to broccoli rabe, an accidental discovery but a taste and texture I found compelling. Look, this is not the best Al Pastor tacos I have ever had but it really satisfies the street taco craving at ACL and their raw tomatillo salsa was piquant and on point. 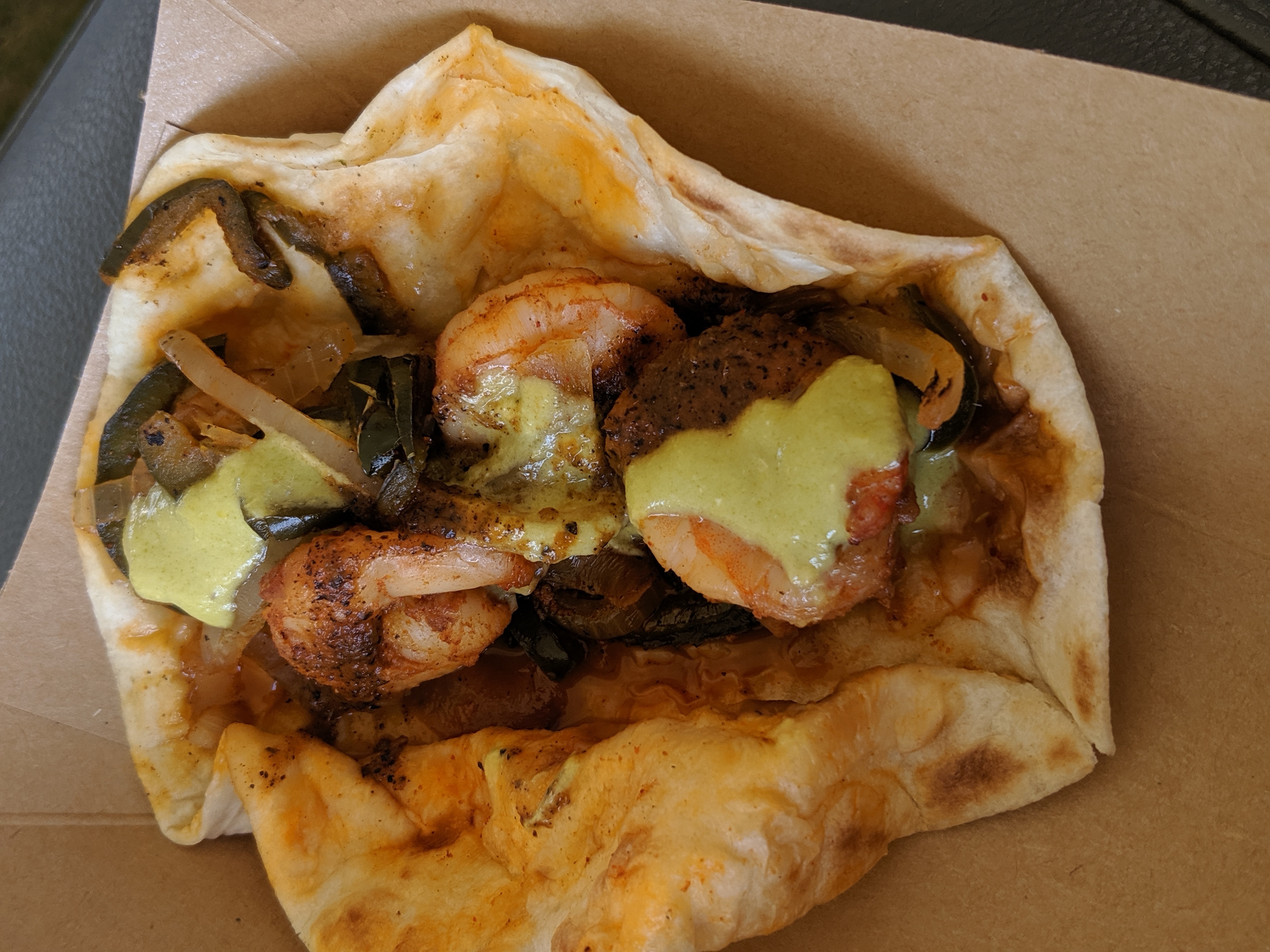 You get what you pay for and this a quality taco that holds up very well in the festival food scenario. I could eat Taco Deli all day at ACL Eats . . . and over the course of two weekends . . . I did.