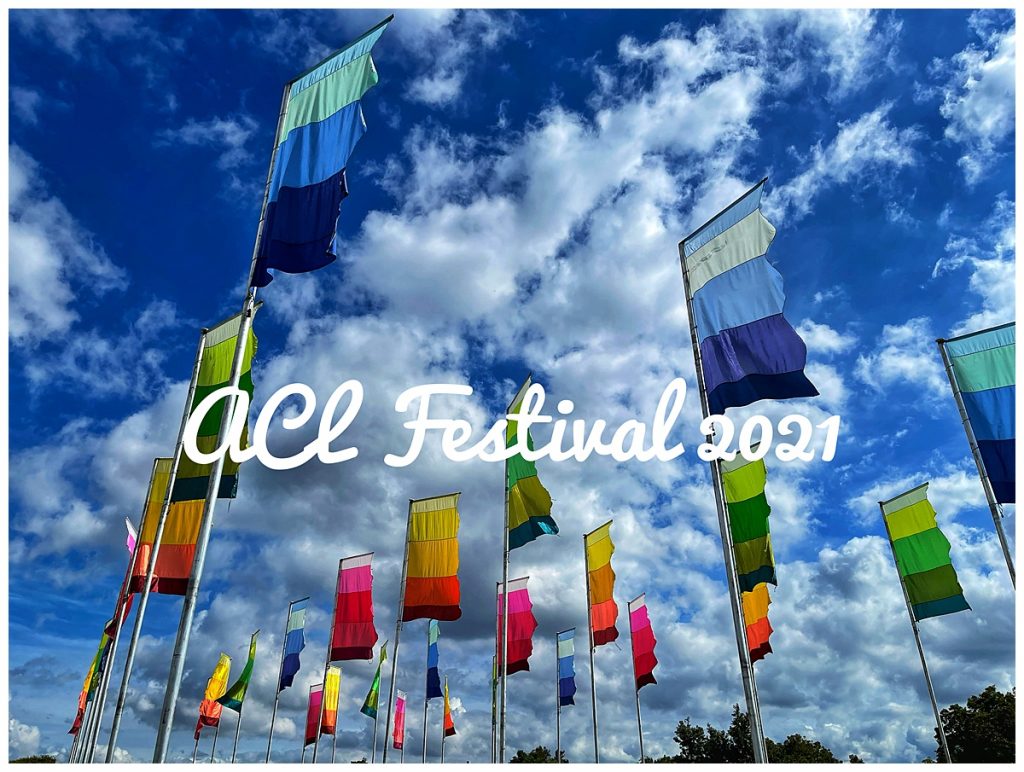 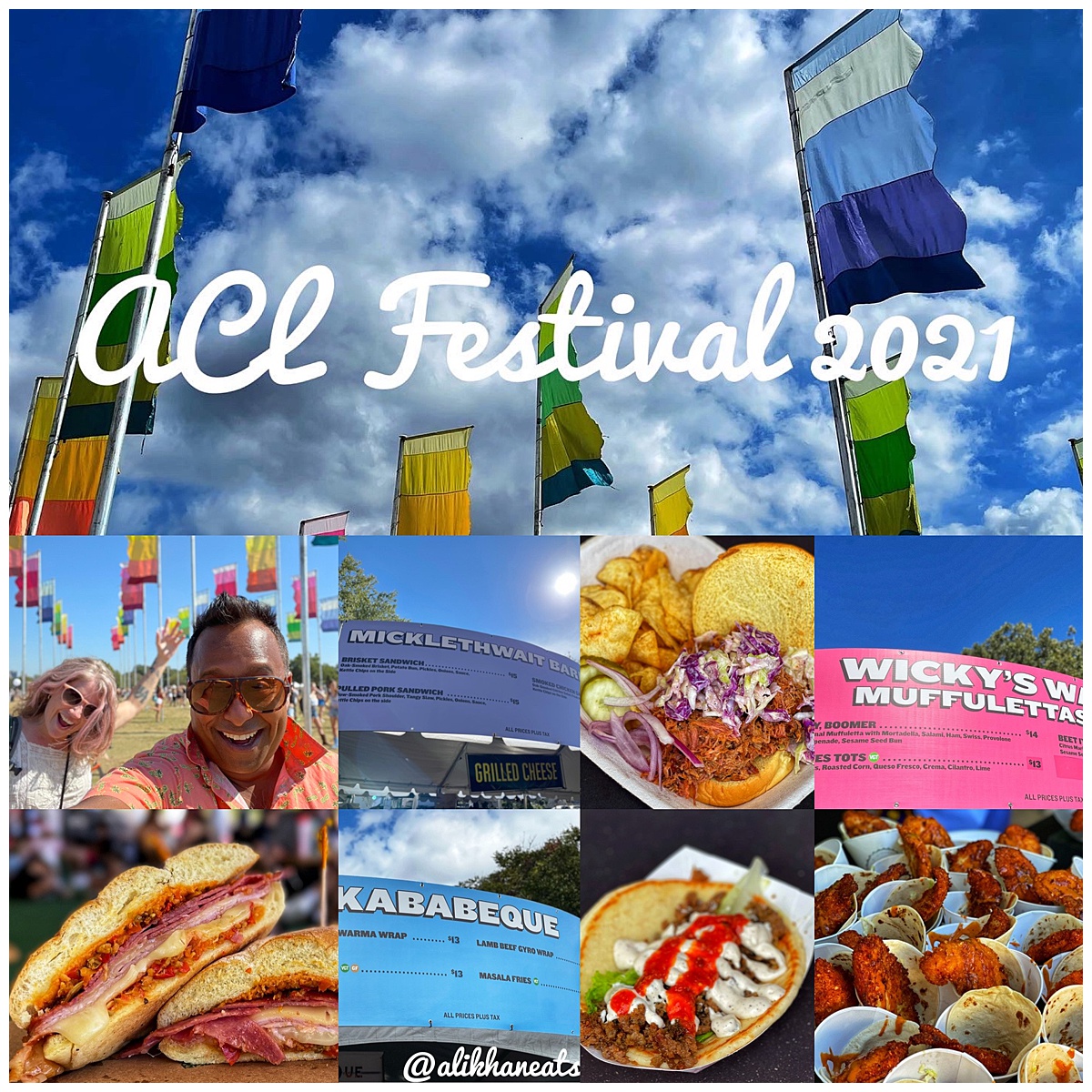 Austin City Limits Music Festival is well in the rearview now. The six day music festival wrapped up this last weekend and suffice to say, I got my fill. So why read about where I ate at a music festival now that it is over? Well these eateries live on in Austin and represent the city food truck and trailer scene oh so well.

I ate a ton of food, so we gotta dig in like NOW. 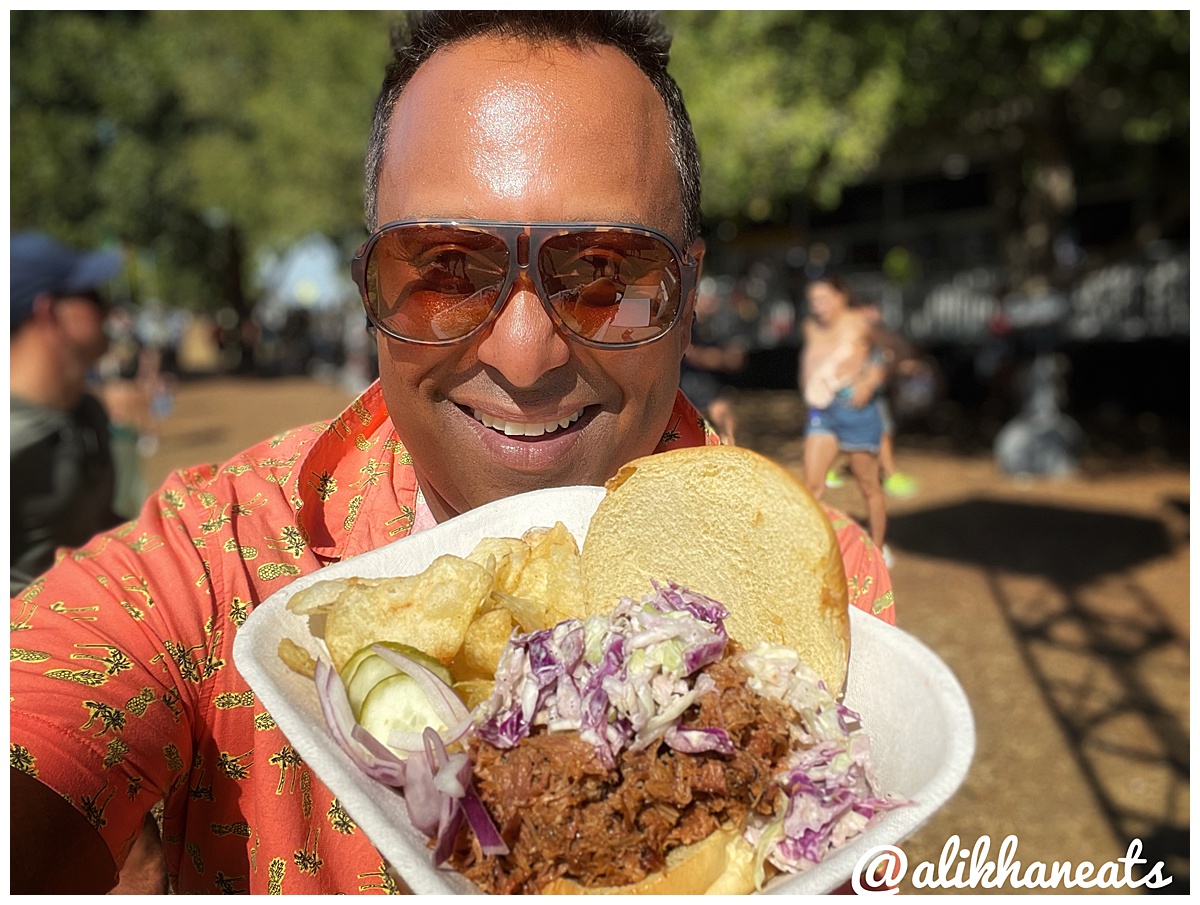 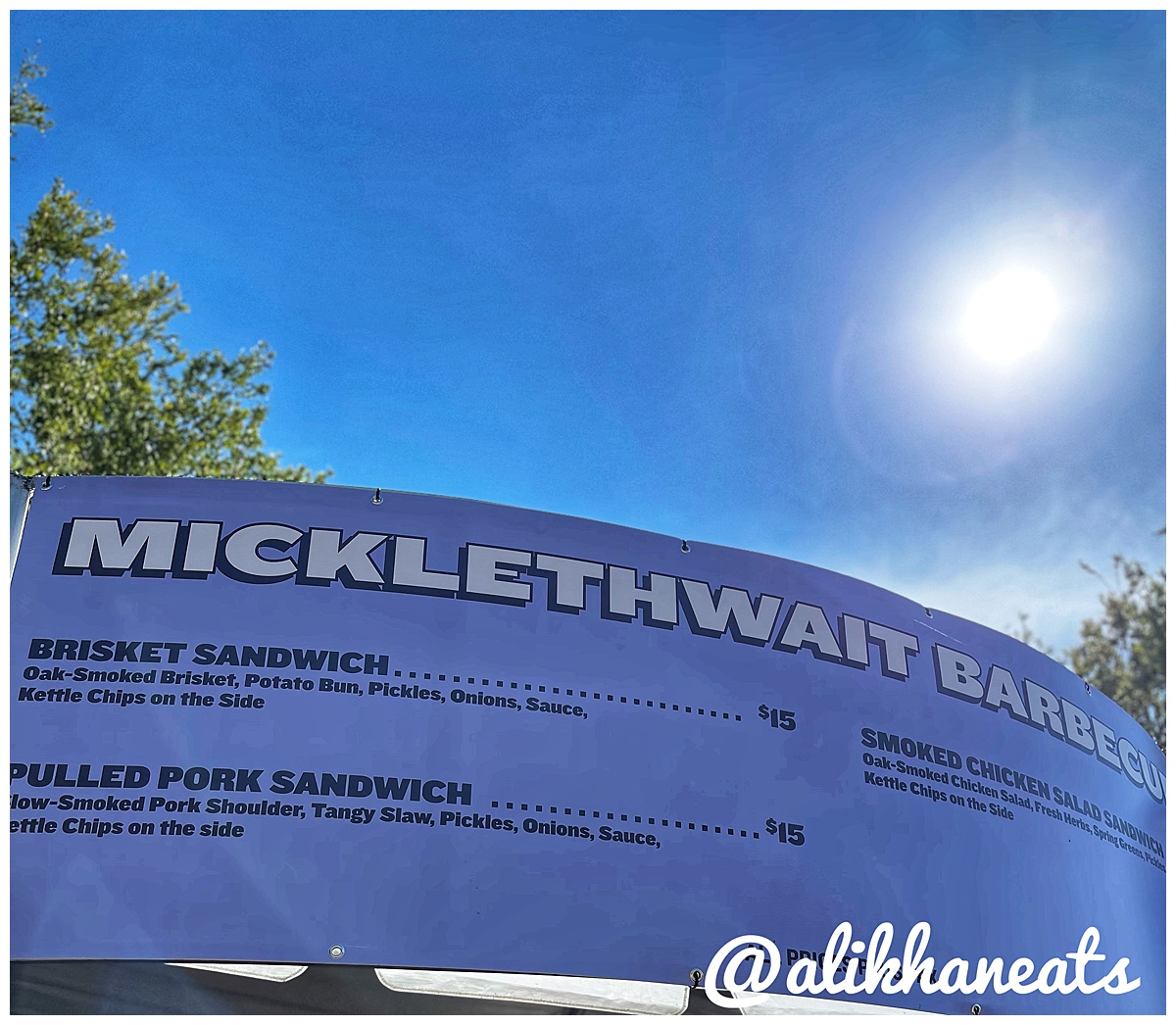 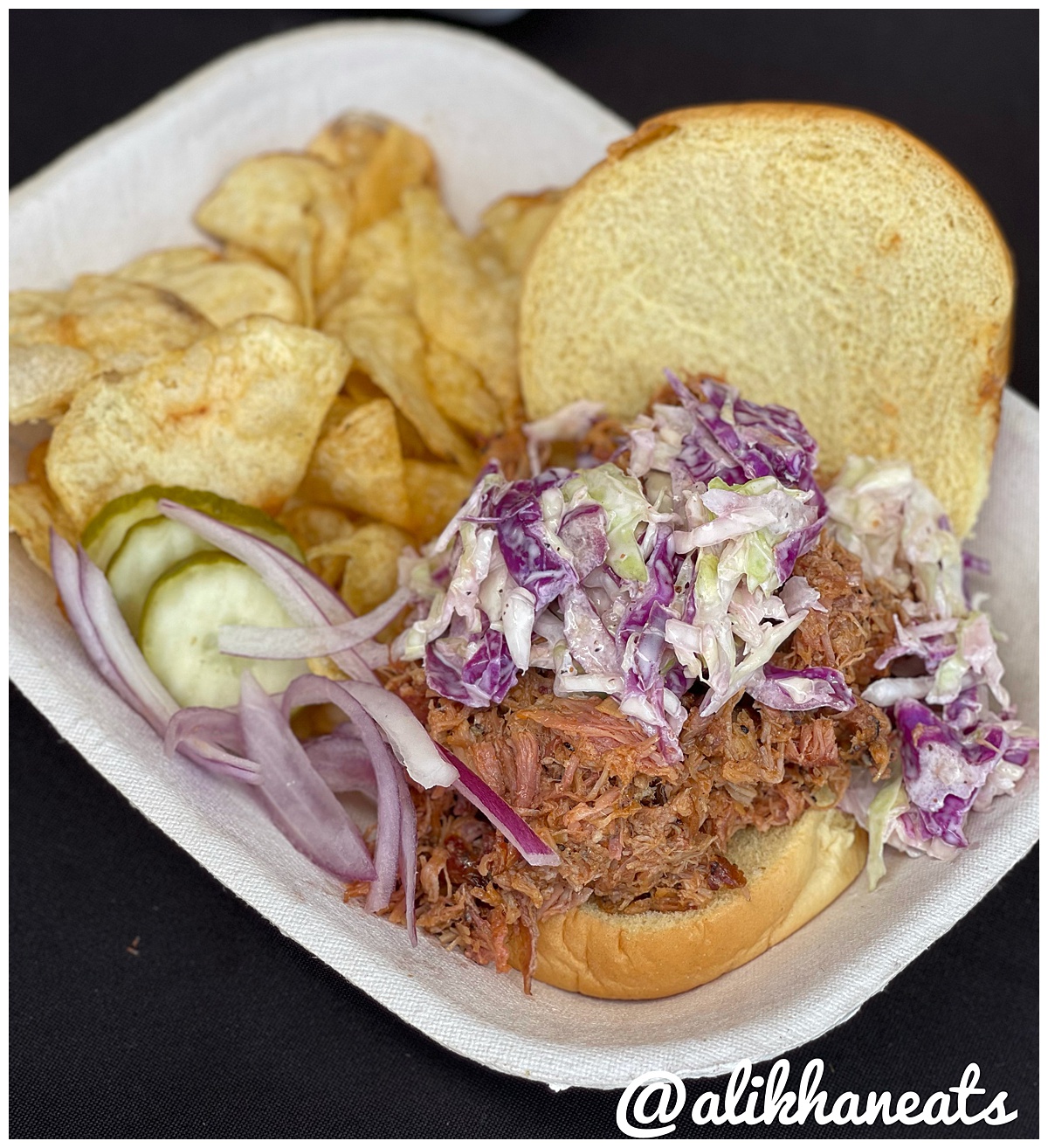 Don’t sleep on a pulled pork sandwich. Even in Texas.

I tend to pass over pulled pork at Central Texas barbecue joints. It’s just not the main draw. Now that’s not to say the pulled pork can’t be done well in Central Texas. For ACL Fest 2021, I had to break ranks with brisket, for the sake of variety. While my heart swoons more for the smoked carnitas at Taco Bronco (Micklethwait’s sister joint) this sandwich came with zero regrets. Go light on the sauce as the meat stands tall on its own. 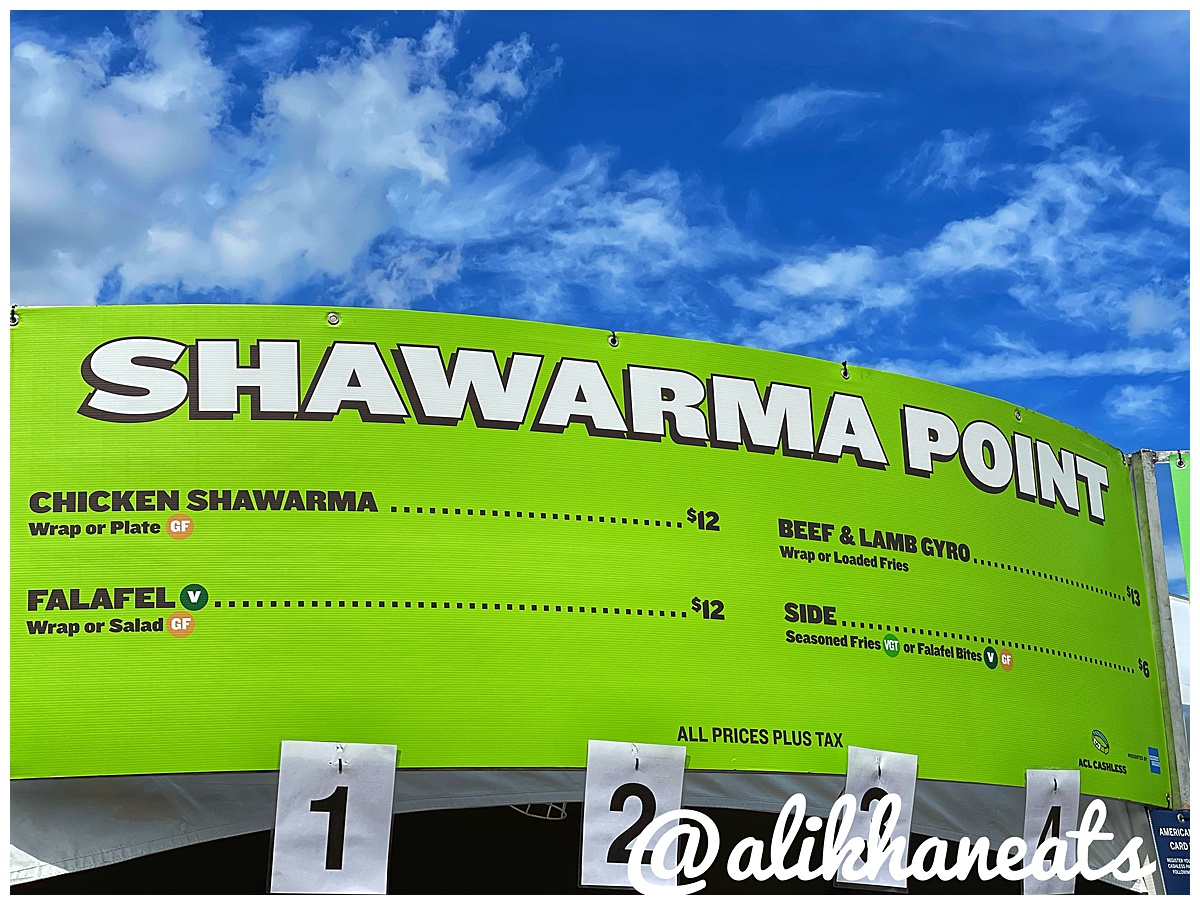 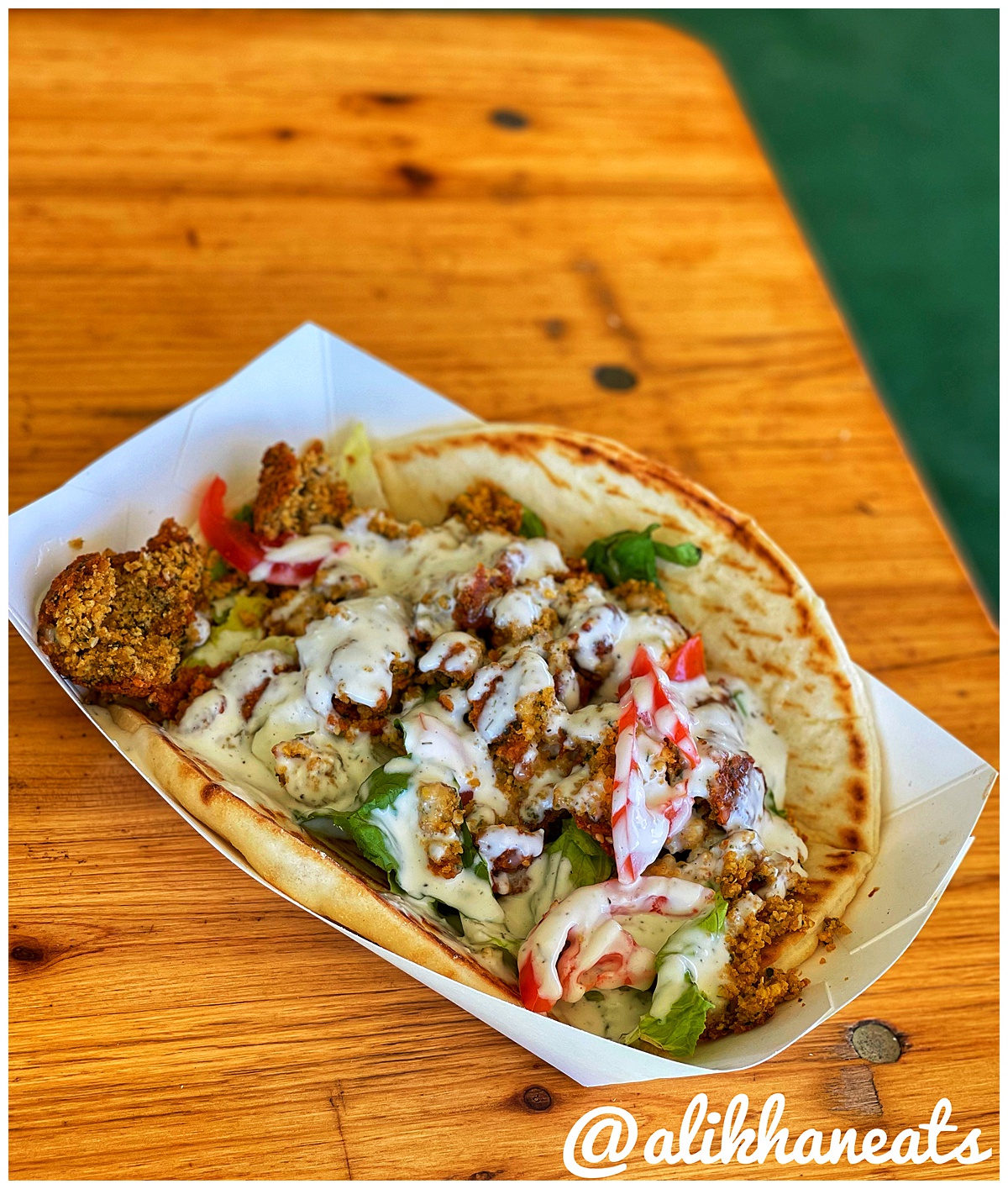 Is the falafel on point?

Last week I called Shawarma Point’s gyro one of my fave ACL Eats. For what it’s worth I had it again and while it wasn’t quite as good, I can’t see myself not getting one at every ACL. That brings us to Shawarma Point’s falafel sandwich. Looking back at my notes I recall the sandwich being respectable. If the falafels had come fresh out the fryer we might have something. What I do know is that I’ll be giving this falafel a second shot at their Rainey street location in Austin. 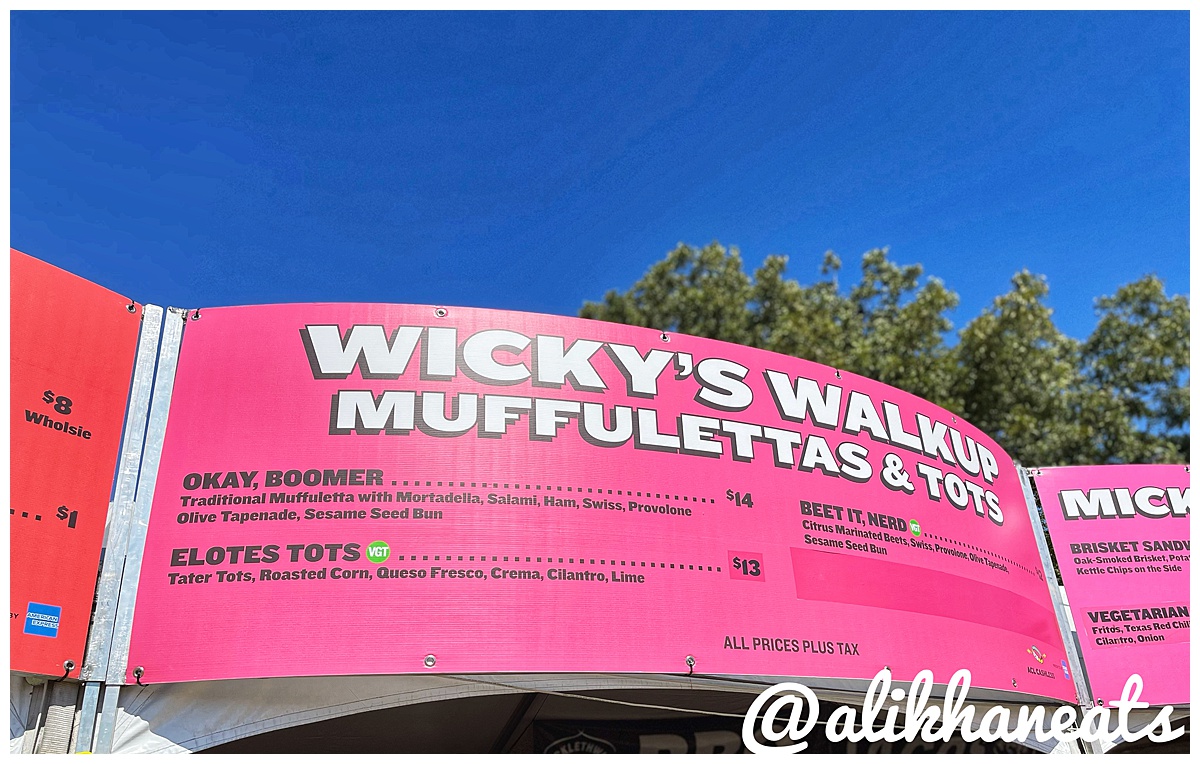 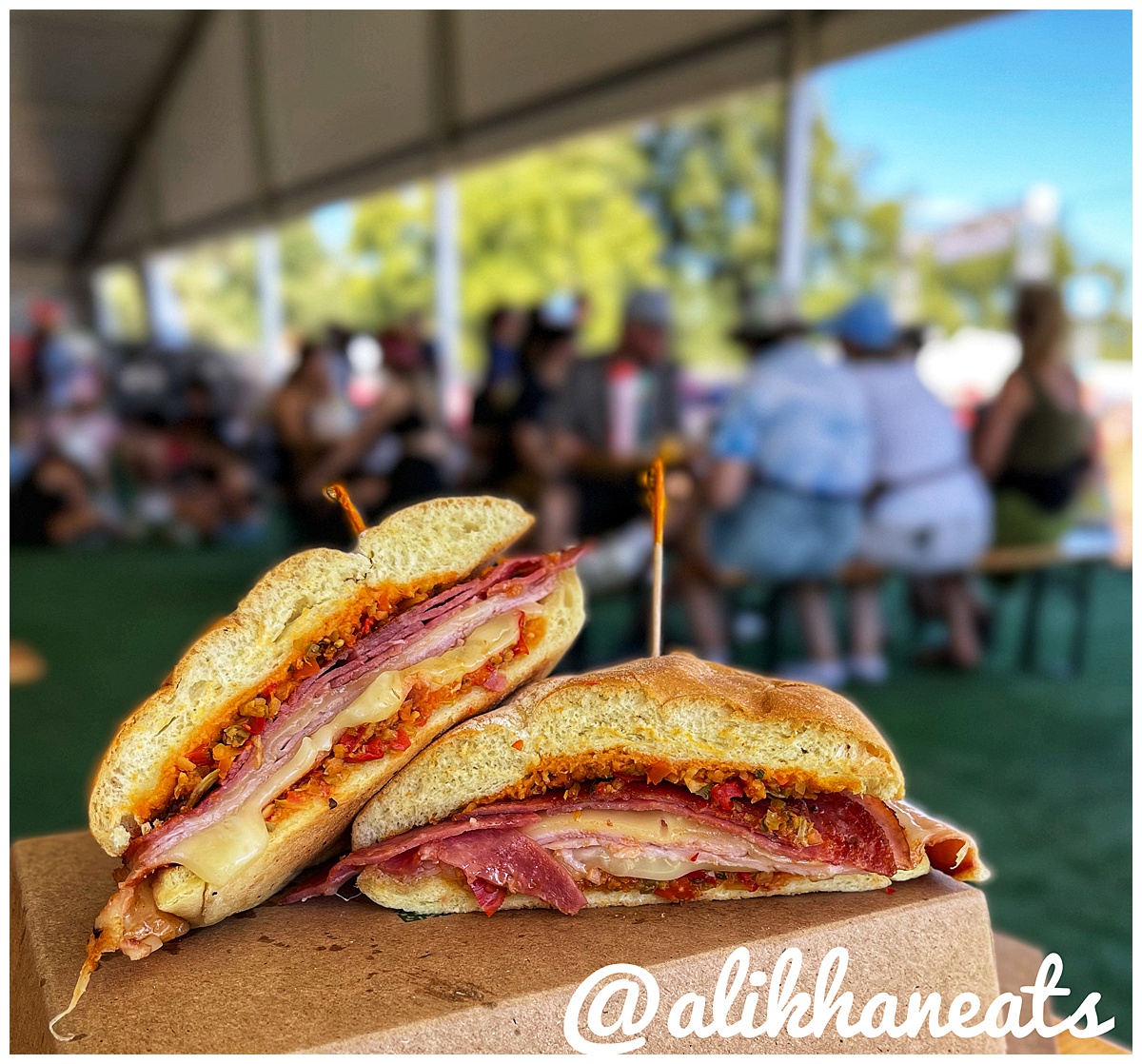 The Vitals:
the spot: Wicky’s Walkup walkup spot at the Cavalier Bar 2400 Webberville Austin TX 78702 // @ACL Eats Main Food Court
the eats: muffuletta sandwich
the bucks: $14
the full nelson: a taste of New Orleans that might make you wish you just went there instead

I spent two weeks shooting a TV show in New Orleans and the experience might have just spoiled me on food forever. Needless to say my standards for Muffuletta’s are high. I’ve even had great ones from my hometown of St. Louis. Wicky’s sadly wasn’t one of the great ones. The sandwich came out hot pressed and had me tasting more Quizno’s than anything else. The people there were as cool as can be which makes me want to try them out again in their East Austin location. Unfortunately their East Austin location is temporarily closed because of Covid-19 staffing issues, though you can get their sandwiches at the Cavalier Bar where they reside next to. 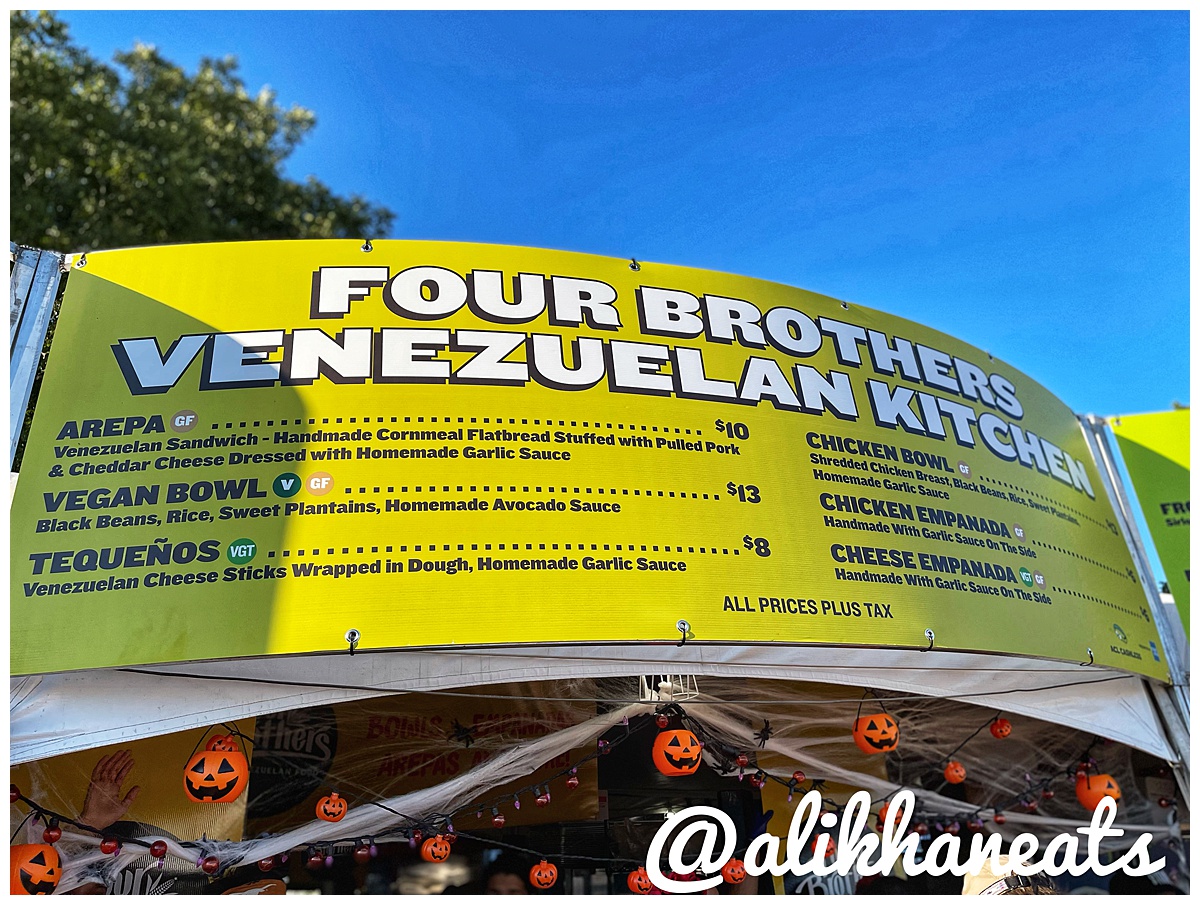 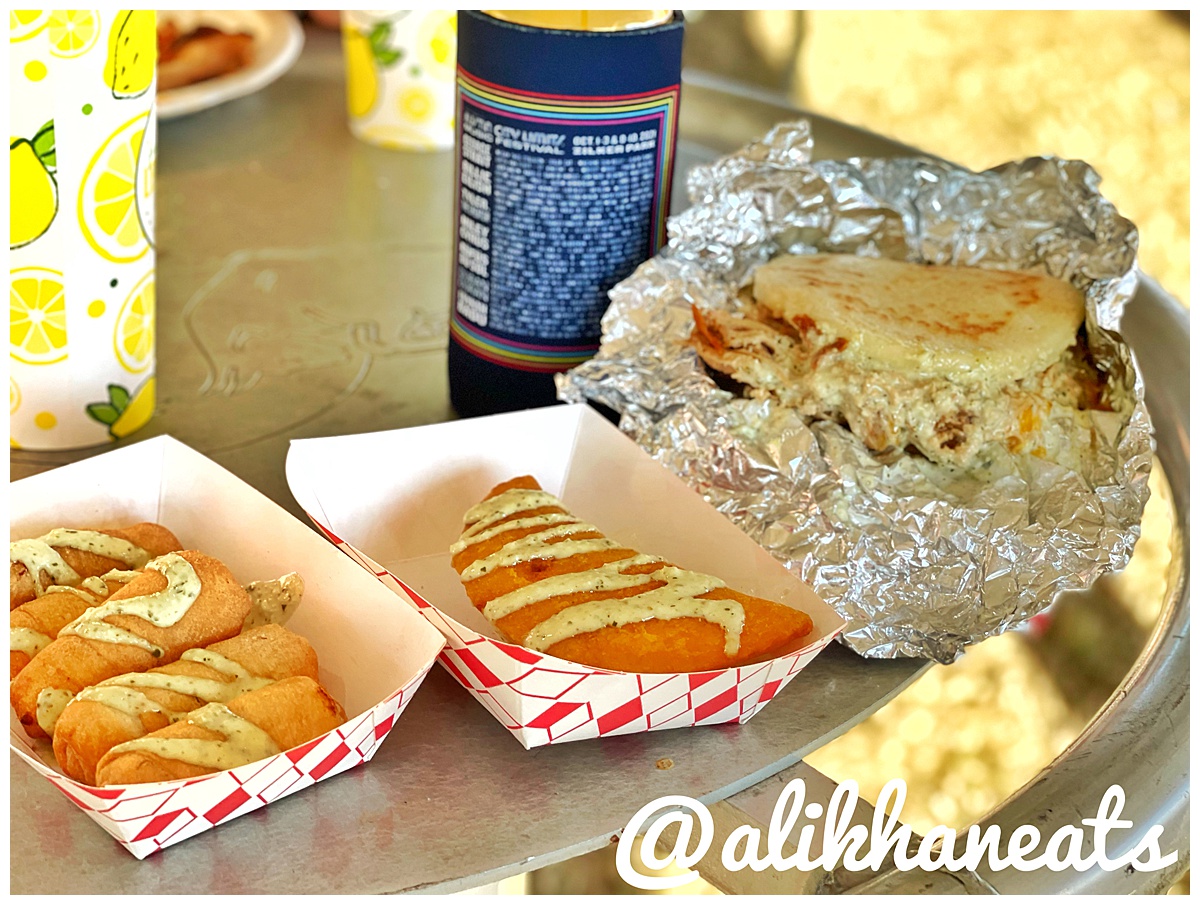 If you went to ACL Eats and were anywhere near Four Brothers Venezuelan Kitchen, you would have definitely heard them. They were loud, boisterous and were having as a good a time as the concert goers were. I’ve never had an Arepa before but it has long been on my bucket list. The unsweetened corn pancake is basically a sandwich though more similar to a gordita. Mine was stuffed with pulled pork, cheese, and a garlic sauce. I also had a few empanadas. To be honest, I’ve had better. But that Arepa . . . I’m obsessed. 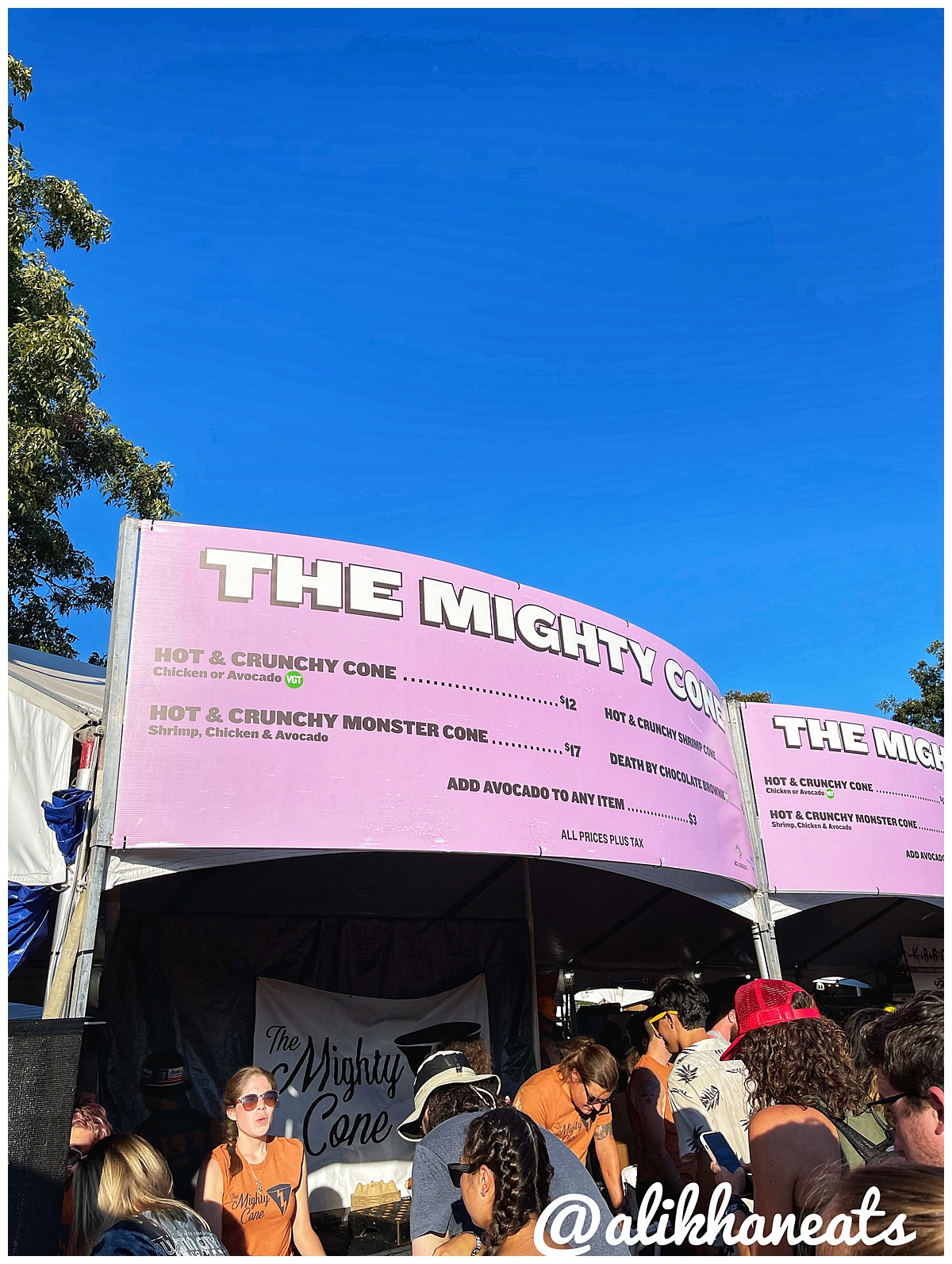 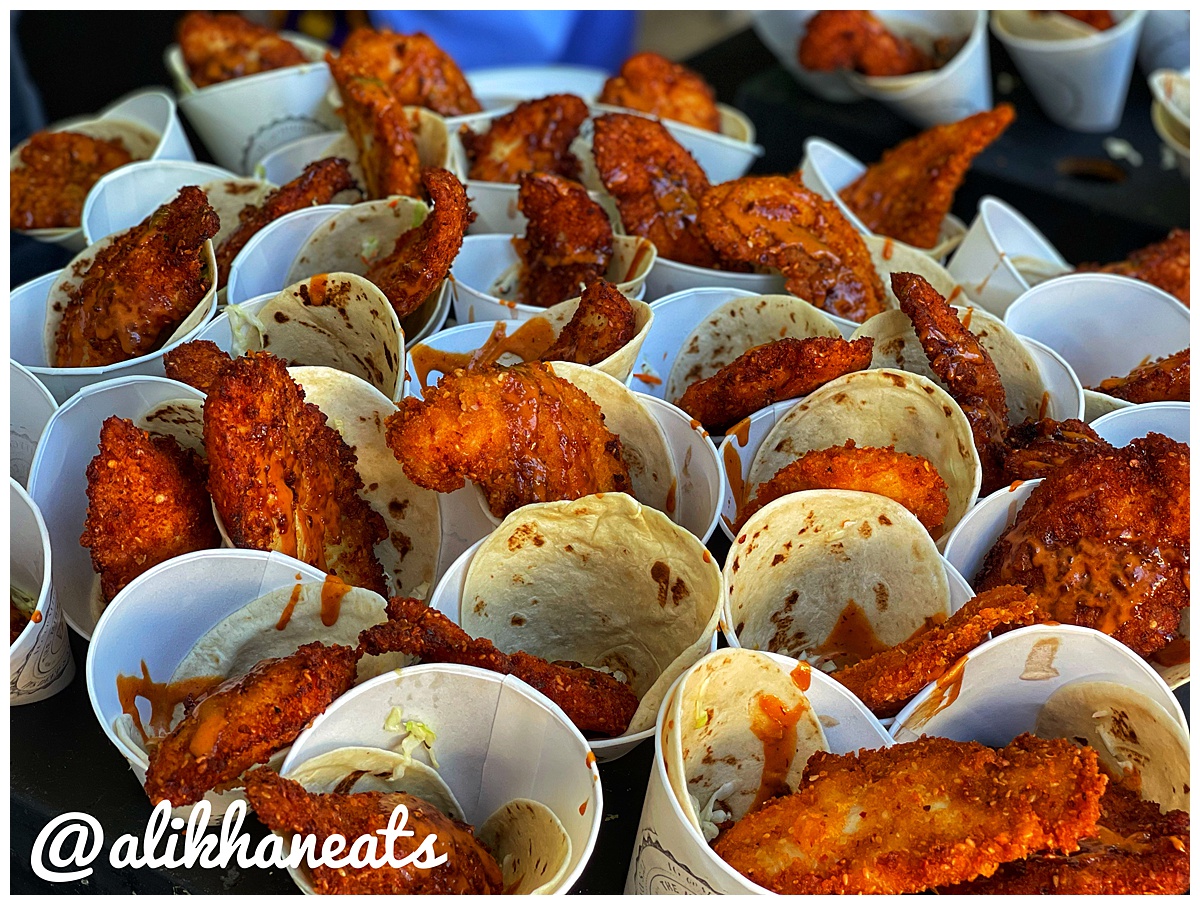 Mighty Cone not so “mighty”

The Vitals:
the spot: Mighty Cone 1720 Barton Springs Austin TX // @ACL Eats Main Food Court
the eats: chicken in a cone
the bucks: $12
the full nelson: I’m not sure I’d use the word “mighty”

I was graciously given access to the media lounge this year for ACL and it comes with perks. One of them is vittles for happy hour, which Might Cone was one of them. I’m almost positive I’ve had the Mighty Cone at previous ACLs. This one was far from mighty. Dry chicken, cold flour tortilla and a lack of sauce made this cone something I’d rather leave as a warning for pedestrians to watch their step. 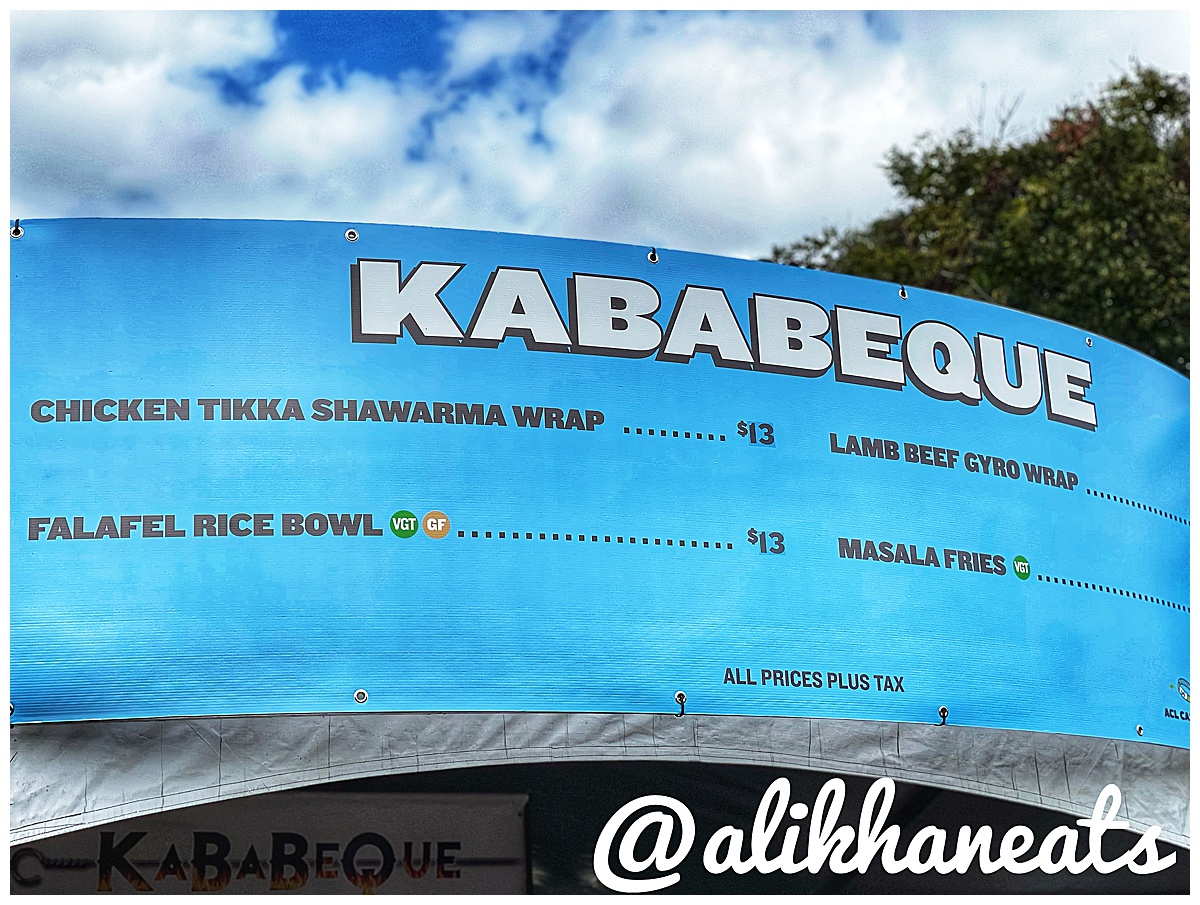 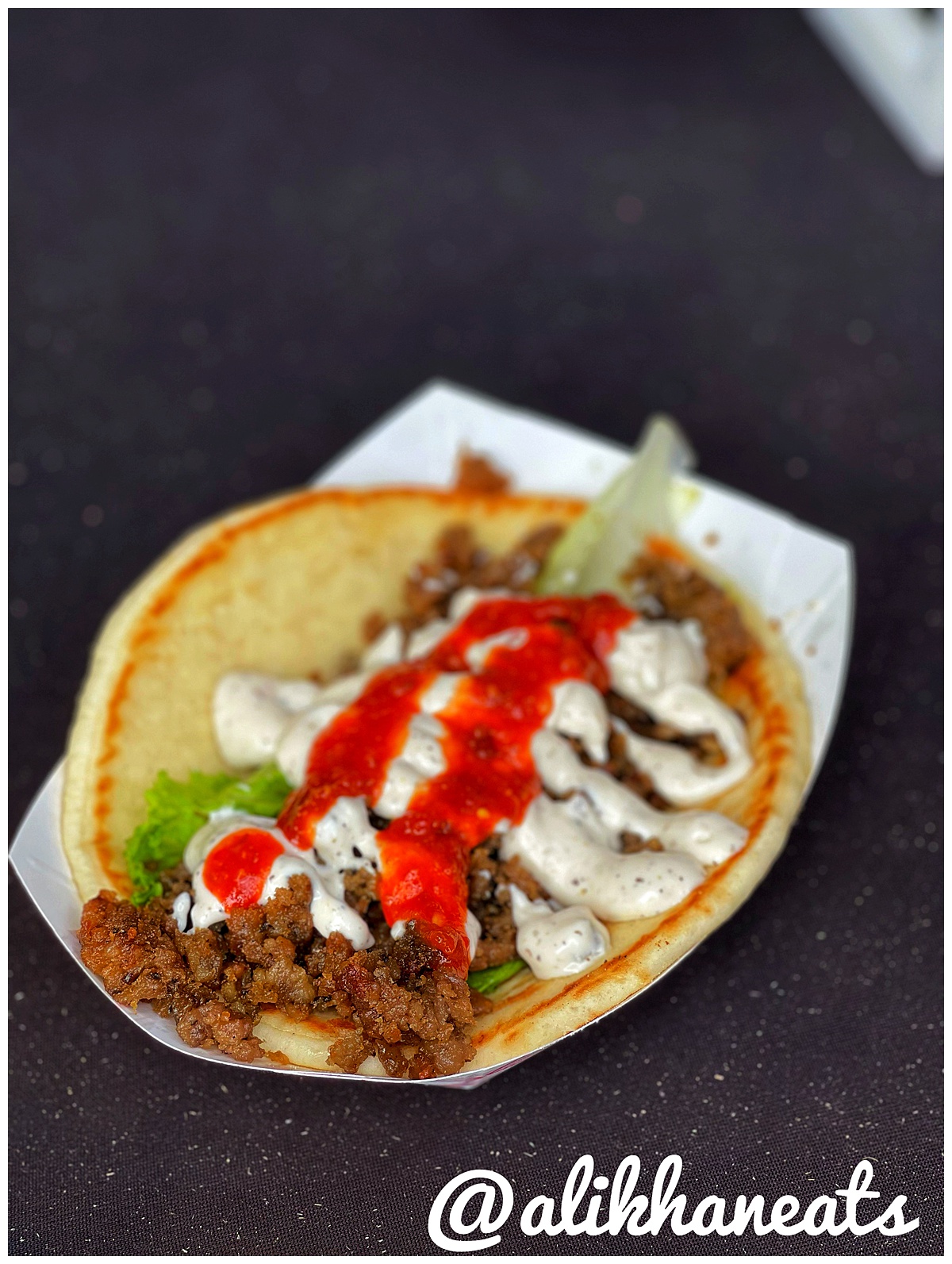 The Vitals:
the spot: Kababeque 6900 Ranch Road Austin TX 78732 // @ACL Eats Main Food Court
the eats: gyros
the bucks: $13
the full nelson: the gyro streaks continued and did not disappoint

My very last bite at ACL was at Kababeque. I’ve seen their tents in years passed but never came through. This year, thanks to my success with gyros at Shawarma Point, I had to test theirs out. Overall they are remarkably similar. Chopped up gyro hit with creamy white sauce and spicy red on a toasted pita. The only shortcoming was . . . me. I had run out of gas at this point at ACL and this meal just took me over the edge and out of the festival.

Beyond my self inflicted indigestion, I am genuinely curious to try out more from Kababeque. Their South Asian meets Mediterranean is right up my alley. Only downside is that they are way far north from Austin proper. 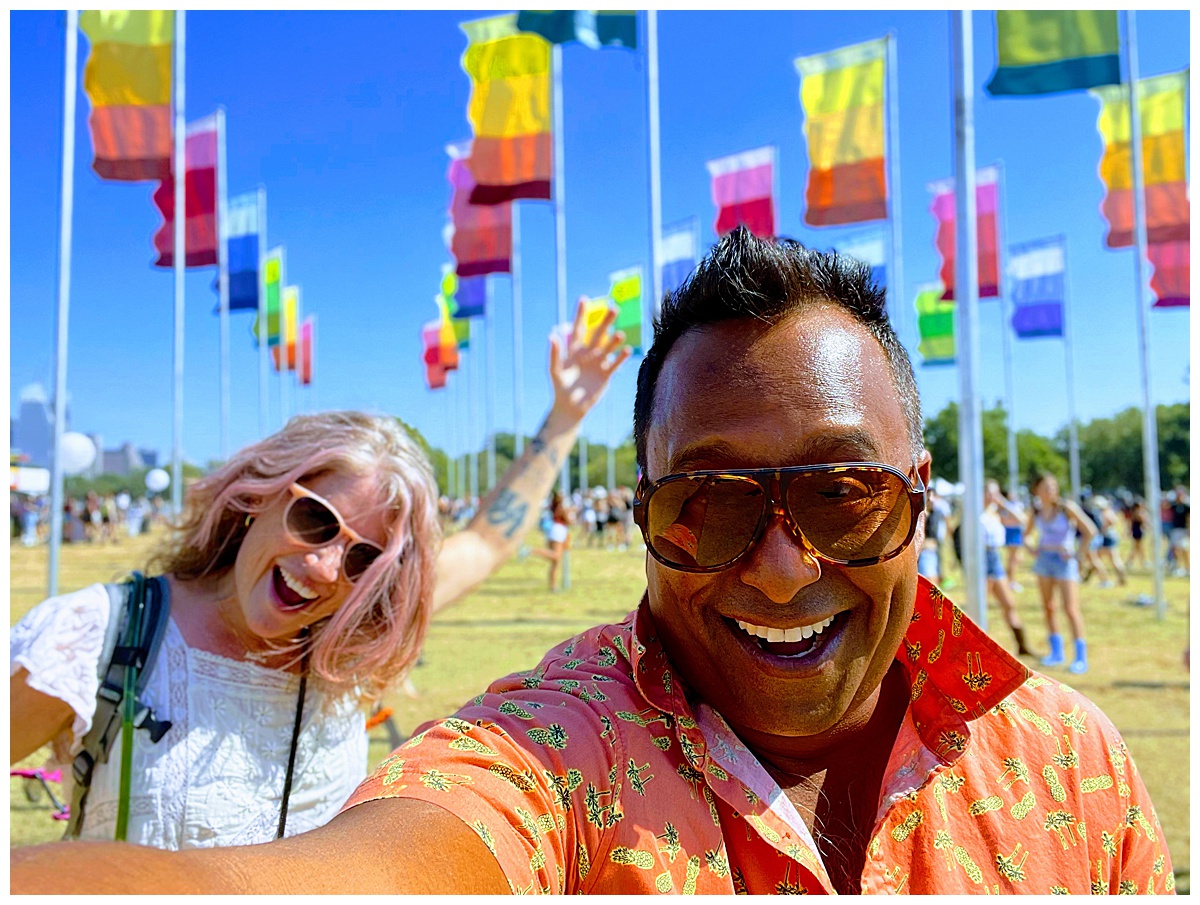 So which bite had me dancing away? 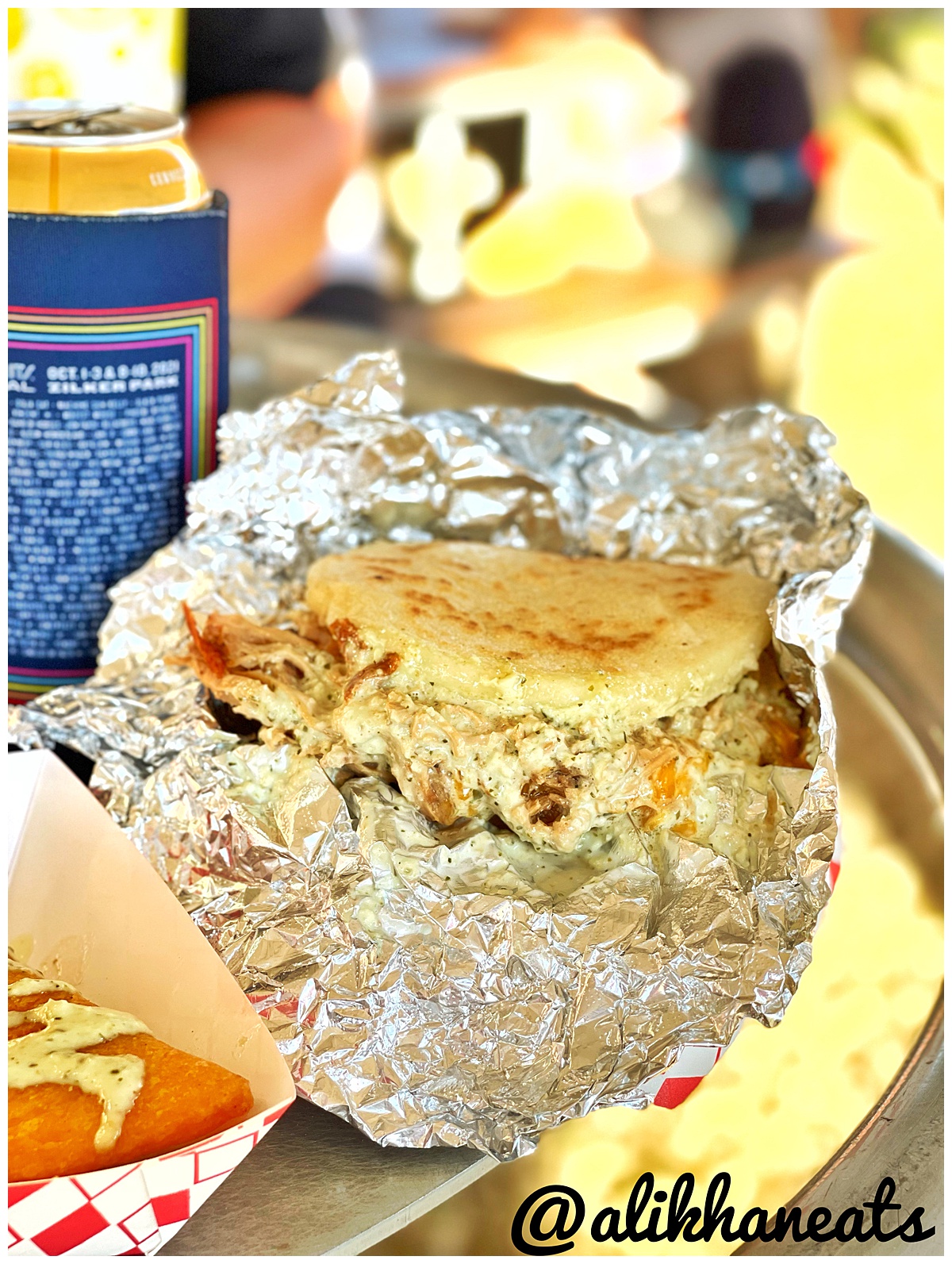 I could not get enough of this dripping rich goodness. I had more than a few good bites at ACL but leave it to Austin City Limits Music Festival to cross a food icon off my bucket list. Well done ACL Eats, I now have a new food crush: Arepas.