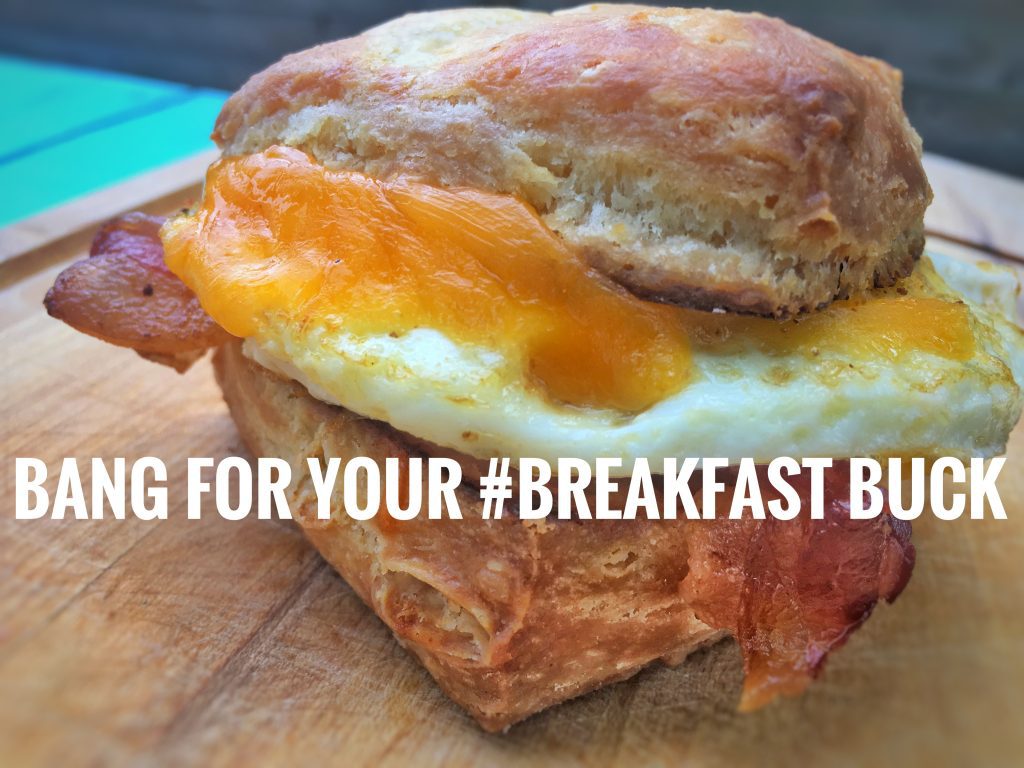 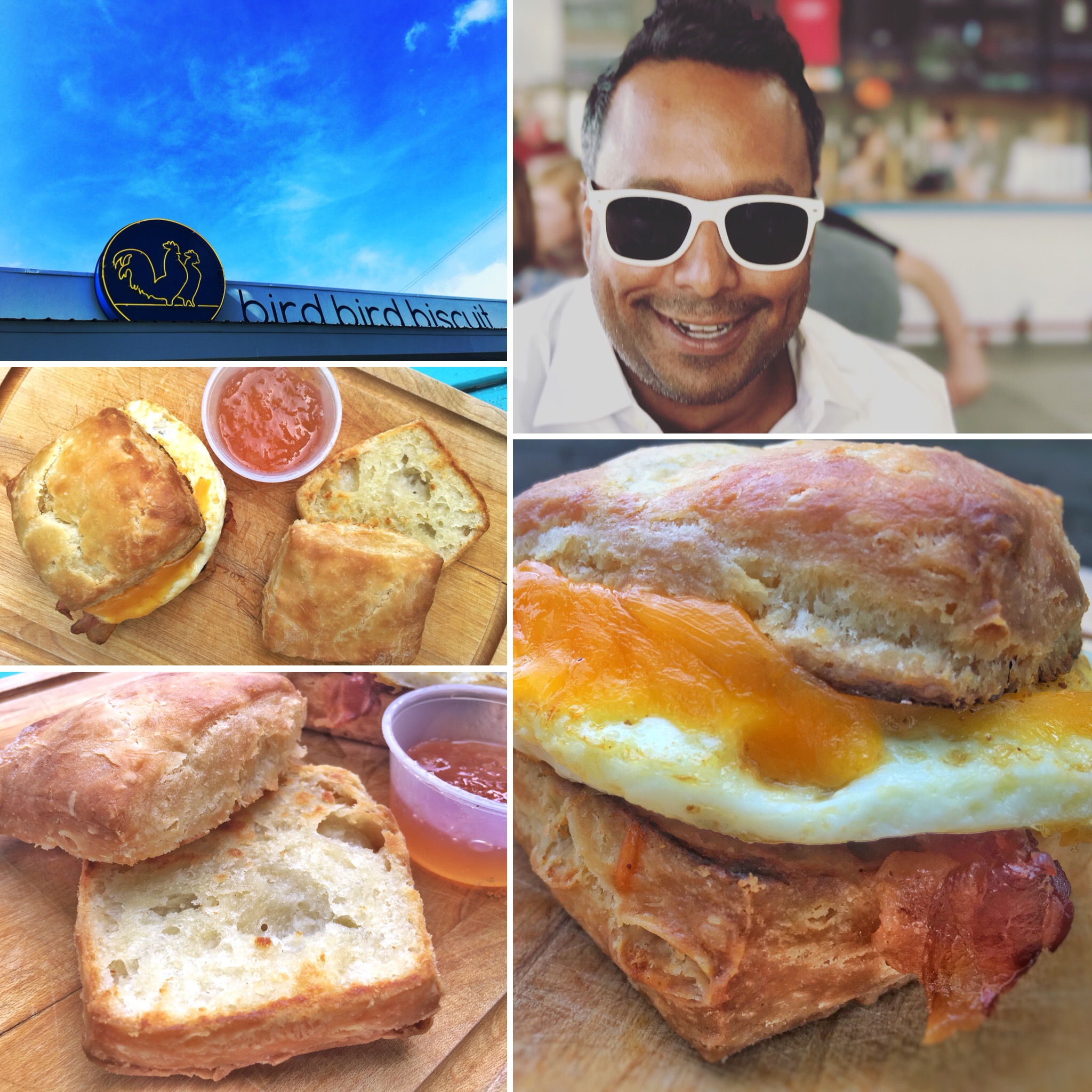 The Vitals:
the spot: Bird Bird Biscuit 2701 Manor road Austin TX 78702
the eats: Bird Bird Bacon
the bucks: $7
the full nelson: a full on portable breakfast meal that is not on a tortilla

To the tourist and the local, breakfast in Austin means breakfast tacos. While popular throughout the state, Austin seems to have made breakfast tacos part of the city’s brand, dare I say part of the city’s soul. But there is more to AM carbs than just corn or wheat tortillas, like biscuits, which are kind of a thing in the South. Part of the excitement for me when I moved to Austin was the idea that I would be getting loads of great Southern eats in the ATX. After all moving from Southern California to Texas is dramatically closer to the land of whistling dixie. But the South, Austin is not. Up until recently I haven’t found fried chicken worth blogging about(coming soon). And as far as biscuits go, I’d just as soon hop on a plane to the deep South, which I have been doing a lot lately if you have been catching up on your Cheap Eats. Still, it doesn’t mean it is impossible to make a good biscuit in the 512 and I think that just may have been the motivation for Thunderbird founders Brian Batch and Ryan McElroy to bring their biscuit dream out of the oven and into the mouths of hungry Austinites looking for a quick breakfast fix with the brand new Bird Bird Biscuit. 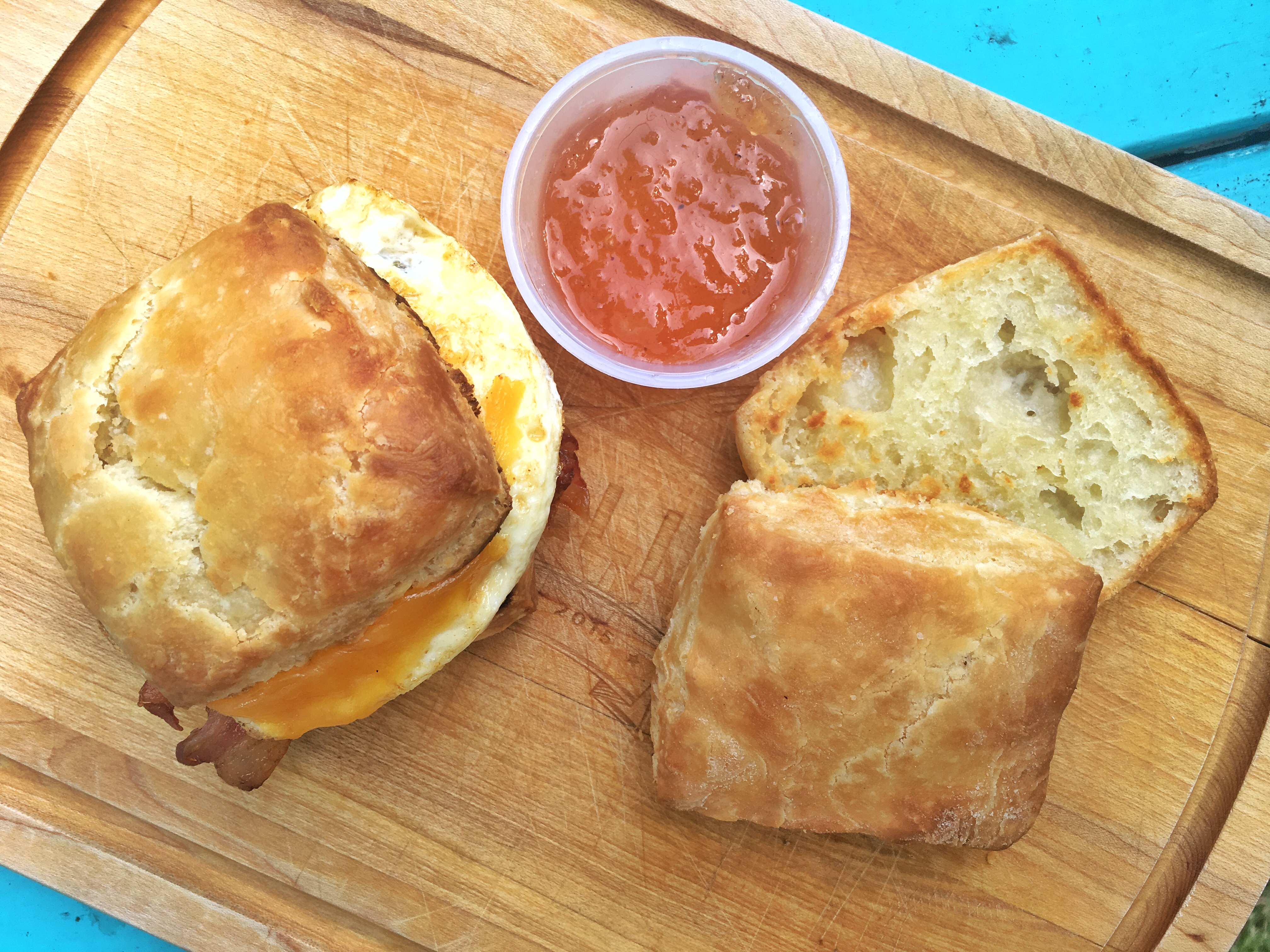 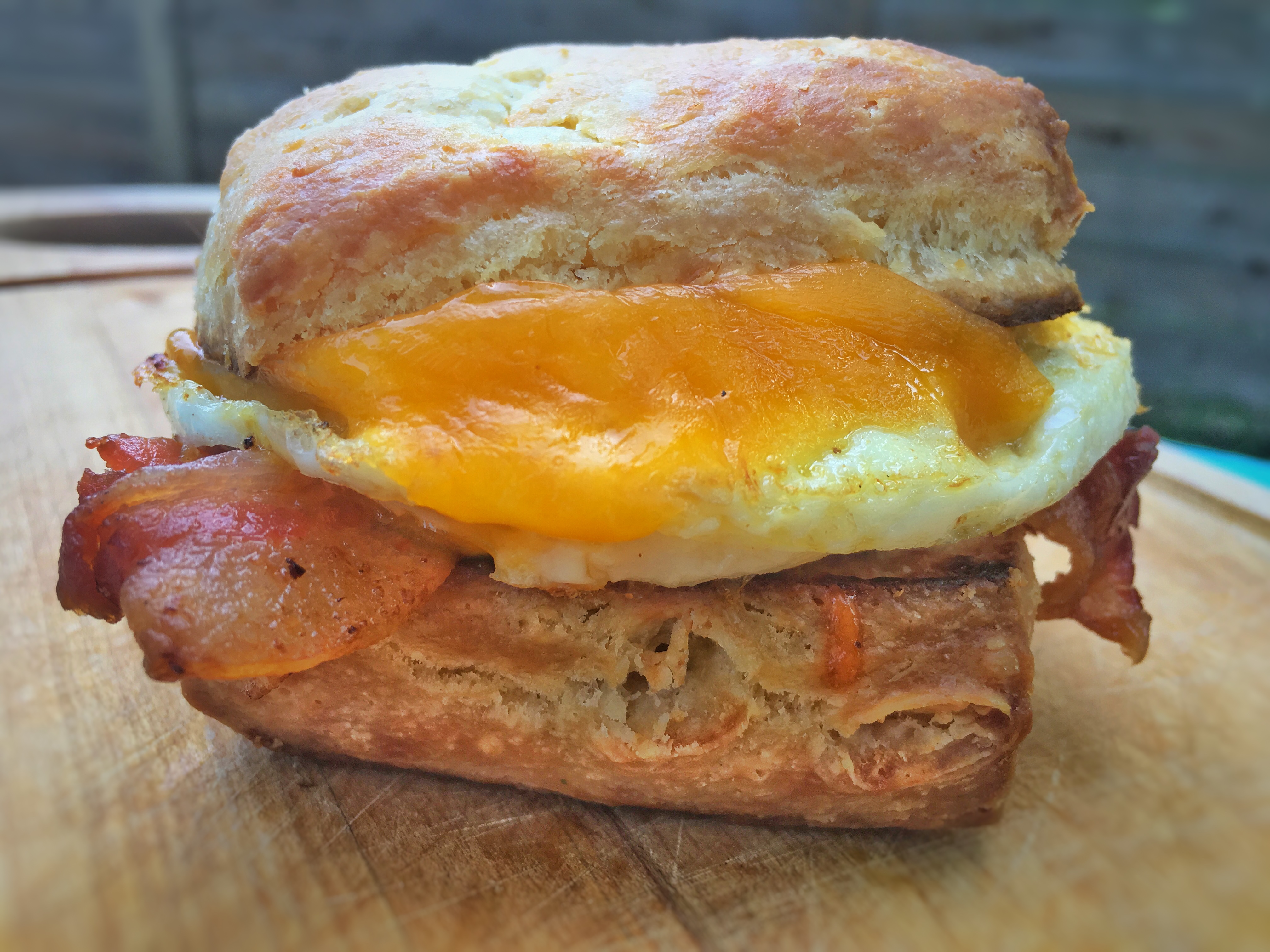 My move in looking for some Bang for your Breakfast Buck at Bird Bird Biscuit was the Bird Bird Bacon which sandwiches bacon, an over medium egg, cheddar cheese and a bacon infused chipotle mayonnaise in between a biscuit. Not surprisingly the cheddar dominates the sandwich, which is certainly not a bad thing. The chipotle mayo was from spicy but also makes for a broadly appealing breakfast sandwich sauce. There was a bit of bacon in every bite and the sandwich overall holds together well. Now for me, a runny yolk makes a breakfast but I can see why they cook the egg to medium – your breakfast stays in between the biscuit and not all over your hands and lap. That being said, on a second visit I’ll slip a buck and ask if they will cook the egg over easy and ask for extra napkins. This is a biscuit after all, meaning it will stick your ribs and one sandwich with egg, cheese and bacon is definitely a meal, a meal for $7 which is definitely some Bang for your Breakfast Buck. Now if you look through the menu you will find other temptations like biscuits and gravy for $5, a fried chicken biscuit and a fried eggplant with fresh mozzarella and basil with pickled onions and a garlic tomato jam. The fried chicken really caught my eye as it features a fried chicken thigh finished with a cayenne black pepper honey and more of that bacon infused chipotle mayo that went on the Bird Bird Bacon. One word of caution Cheap Eaters, keep your expectations set to high because that sandwich, appropriately named the “Queen Beak” will set you back $9. 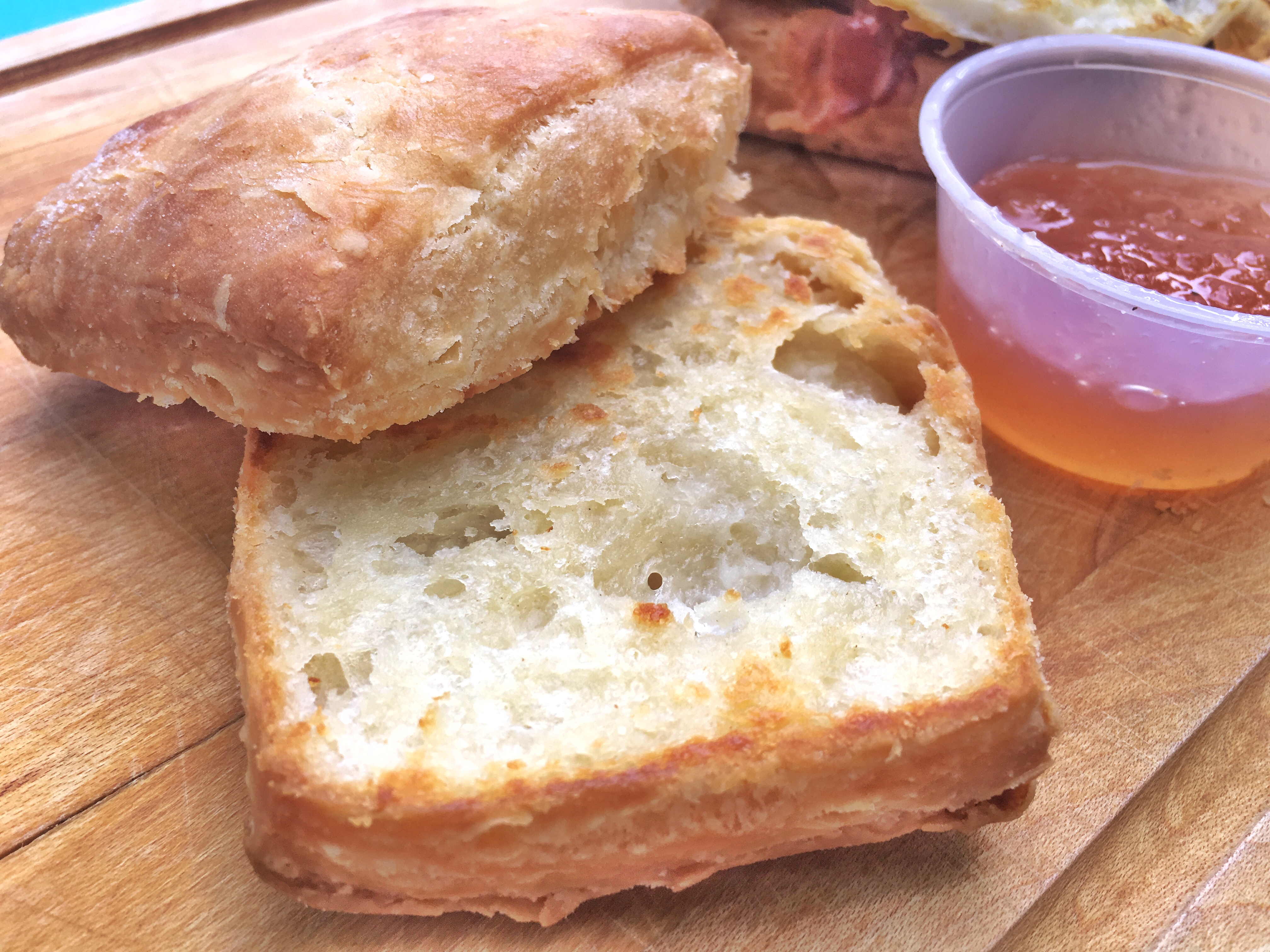 But the real move at Bird Bird Biscuit? The biscuit with jam for $5. I’l have to do some further detective work on what goes in the jam, perhaps starting with the fruit, but one taste of this jam and you instantly know this ain’t no jelly from the jar. I’m borderline obsessed with this jam, mainly because it has a spicy kick to it. My guess is there are some warming spices like cinnamon, maybe nutmeg or clove but I also think maybe some cayenne too. So often good cooking is all about balance like adding enough salt to your sweets or in this case a touch of heat to offset the natural sweetness in a jam. And in the case of the simple but very satisfying biscuit and jam, you really appreciate the quality of the biscuit. These biscuits are good and buttery as they should be, but the biscuit and jam biscuit was a bit more flaky – a sign of biscuit perfection in my book. And remember these are the guys who brought you Thunderbird Coffee so you know the java will be on point. Good coffee plus this biscuit and jam is a solid Bang for your Breakfast Buck deal. Simple but very tasty. 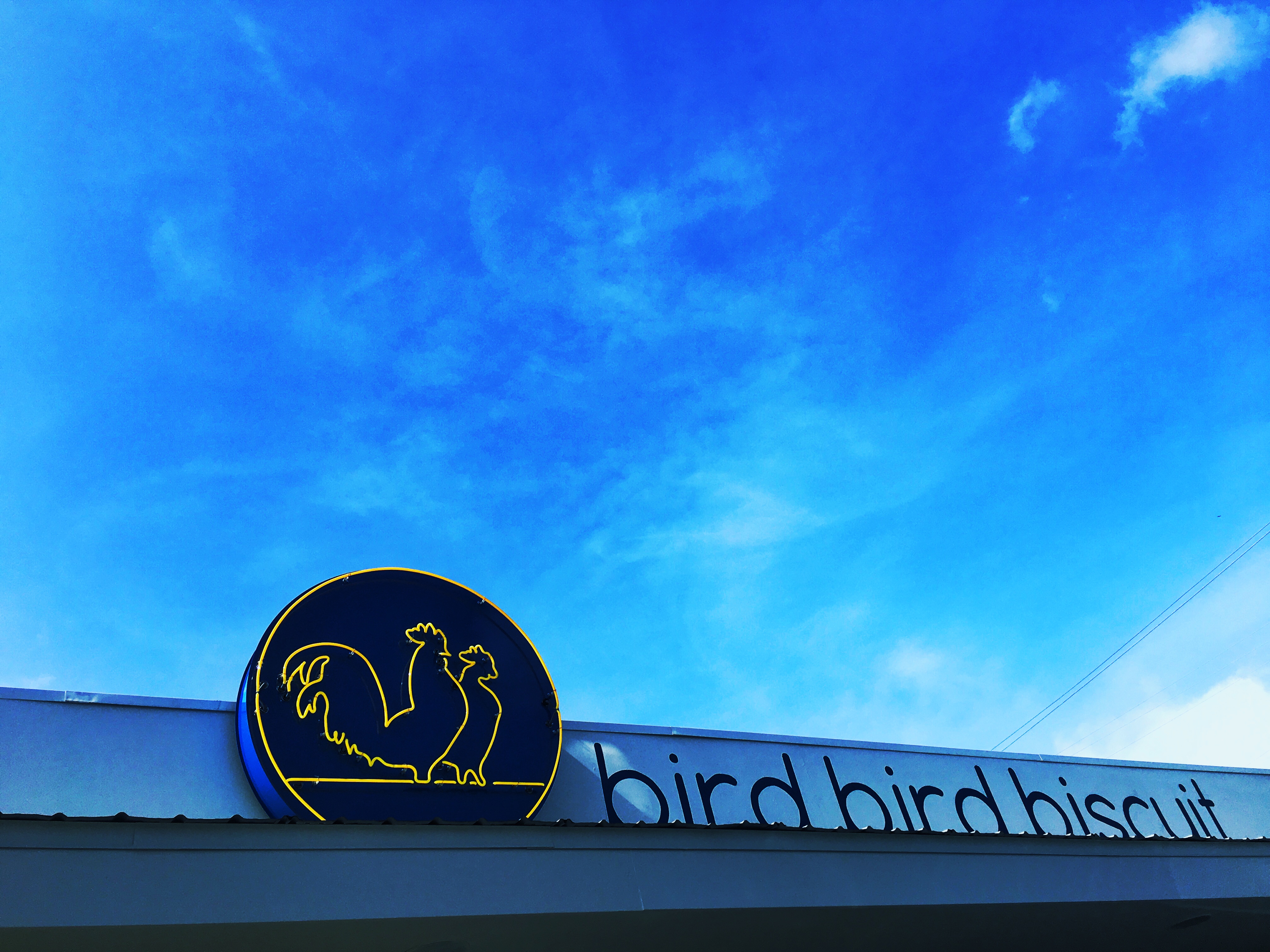 Bird Bird Biscuit looks like a serious contender to stick around in the ever changing and growing East Austin restaurant landscape. With places like Sour Duck Market offering compelling affordable options(albeit higher priced) Bird Bird Biscuit just might fill a niche for that fast casual with a sincere emphasis on quality. Will biscuits be the new breakfast tacos in Austin? Maybe, maybe not. But when you offer legit, unique breakfast options that can attract hipsters and young families, well the sky’s the limit. Just ask the people slinging breakfast tacos.