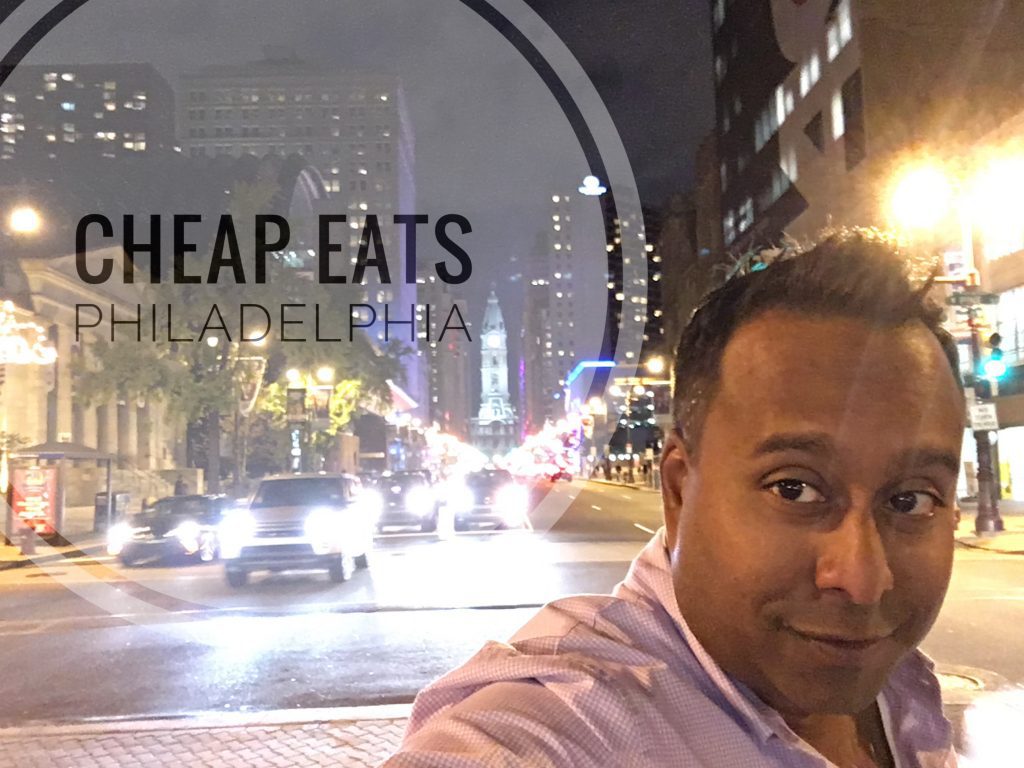 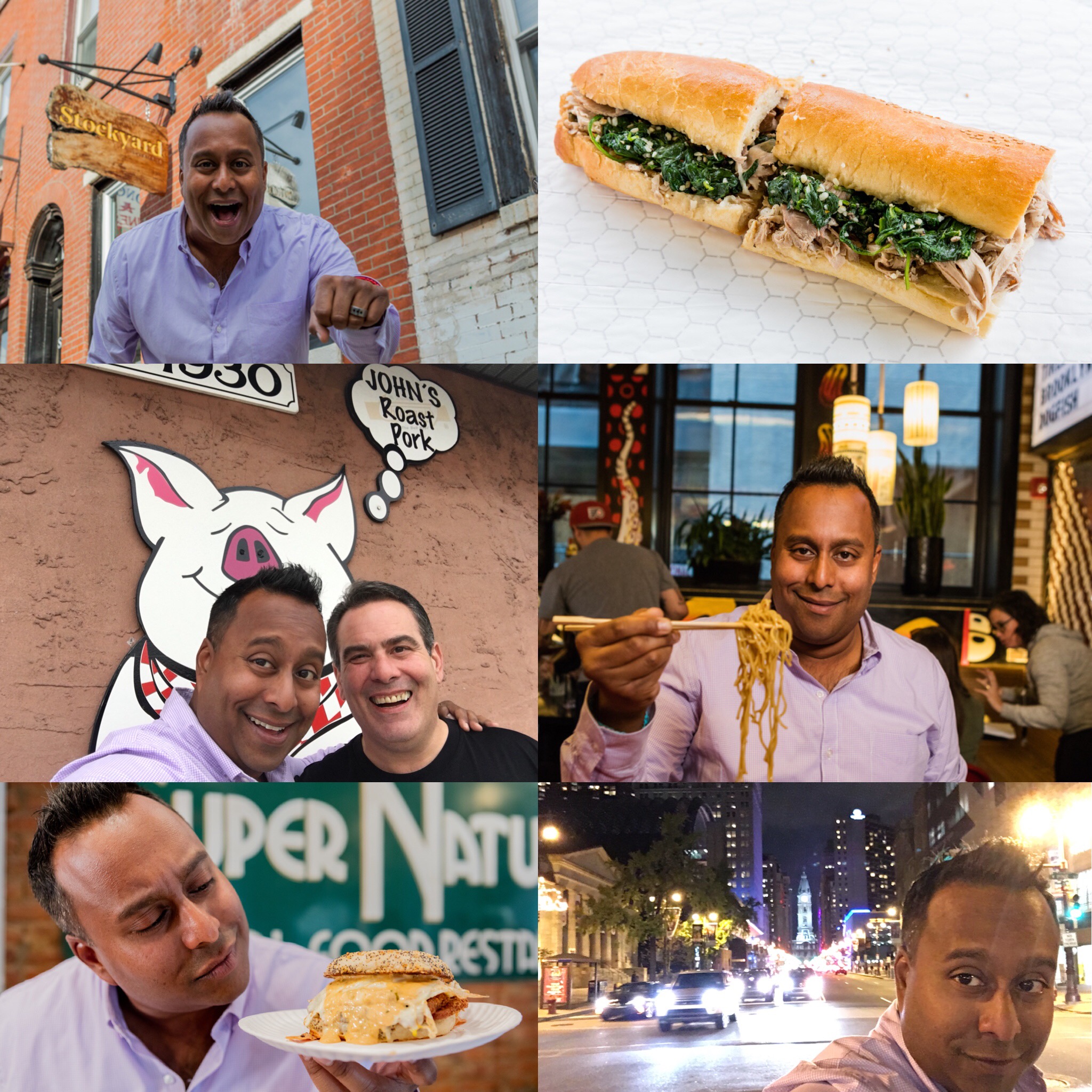 City of Brotherly Grub. Yes, Philadelphia is truly a grand land of Cheap Eats and frankly could not be a better place to begin the fourth season of Cheap Eats. Philly is a special town for me, a veritable second hometown as this is where my wife hails from. In general I love the East Coast: the history, the diversity and die hard food traditions. Ask someone from Philly where the best hoagie is and you will get an earful. Get ’em started on how their high end dining spots can compete with NYC and you can pretty much give up the next few hours of your day. And unless you are the Pope or Santa Claus, or a NY Giants fan(or Cowboys), it is an easy town to root for. So what can $35 get you around here? Well, I’m glad you asked . . . 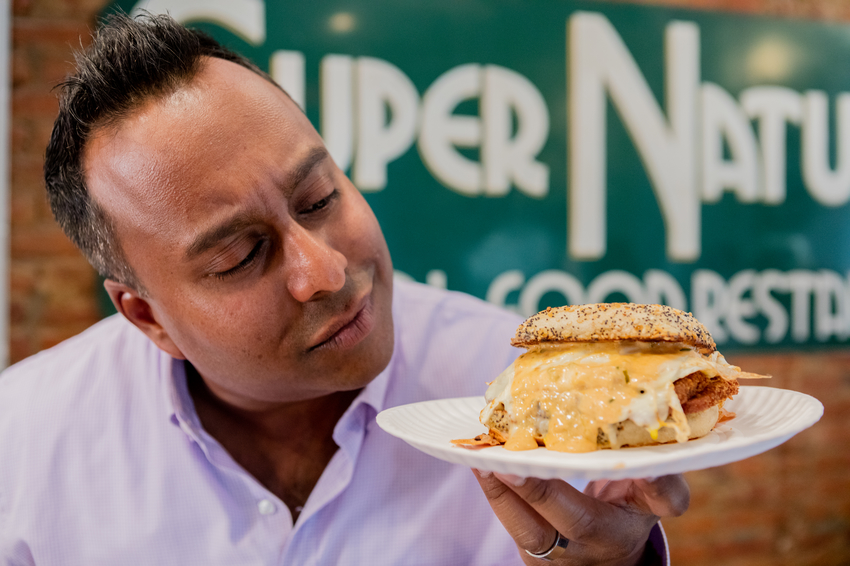 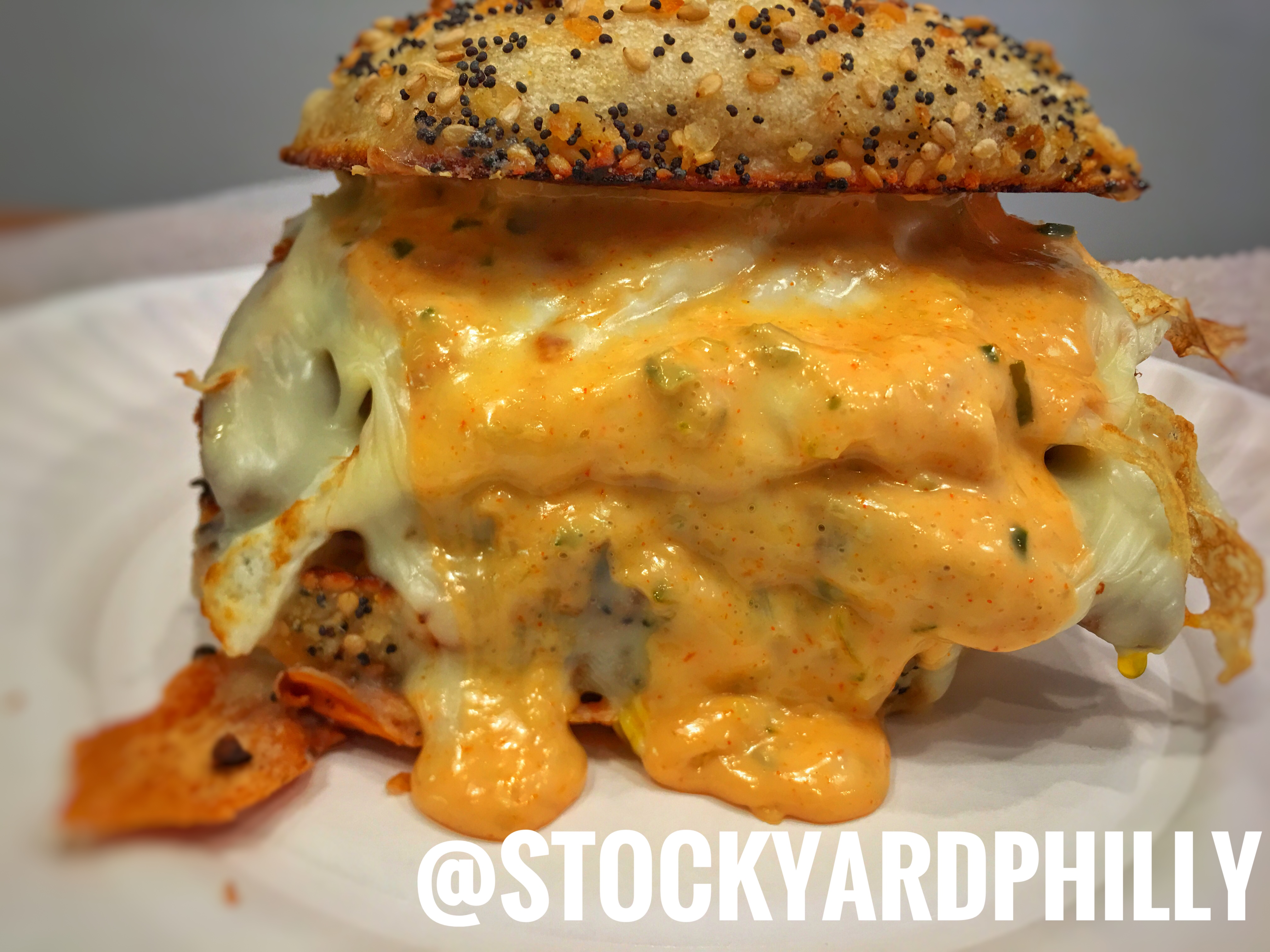 The Vitals:
the spot: Stockyard Sandwich Co 1541 Spring Garden St. Philadelphia PA 19130
the eats: BYO Breakfast sandwich on everything bagel with house made scrapple
the bucks: $6
the full nelson: The land of sandwiches delivers in the AM too

Stockyard Sandwich Company is a stone’s throw from my brother and sister in law’s house in Center City Philadelphia and I got turned onto their rather epic braised beef version of a cheesesteak during a lunch visit almost a year back. But when it came to Cheap Eats in Philadelphia, their rock bottom breakfast sandos ranging from $5-$7 made them a must stop for the start of my day. Scrapple, a mishmash of pork parts and cornmeal, spiked with some aromatic spices has been on my meaty bucket list for sometime. But since I have yet to make it to Pennsylvania Dutch country, scoring scrapple in Center City would have to do. Like any great sandwich, bread is key, and apparently Philly can also add bagel to their list of well done breads because the everything bagel I scored possessed the great chew one would expect from a NY bagel, but with cheaper rent. Owners Mike Metzger and Will Lindsay have the right credentials to work anywhere in the city considering that they both attended culinary school and have worked at top shelf restaurants like Morimoto, but instead these guys choose break down whole animals for a menu that barely breaks a $10 spot. To me this says these guys are cooking for love rather than money. And I love what they are doing because I love what I eat there, at any time of day. 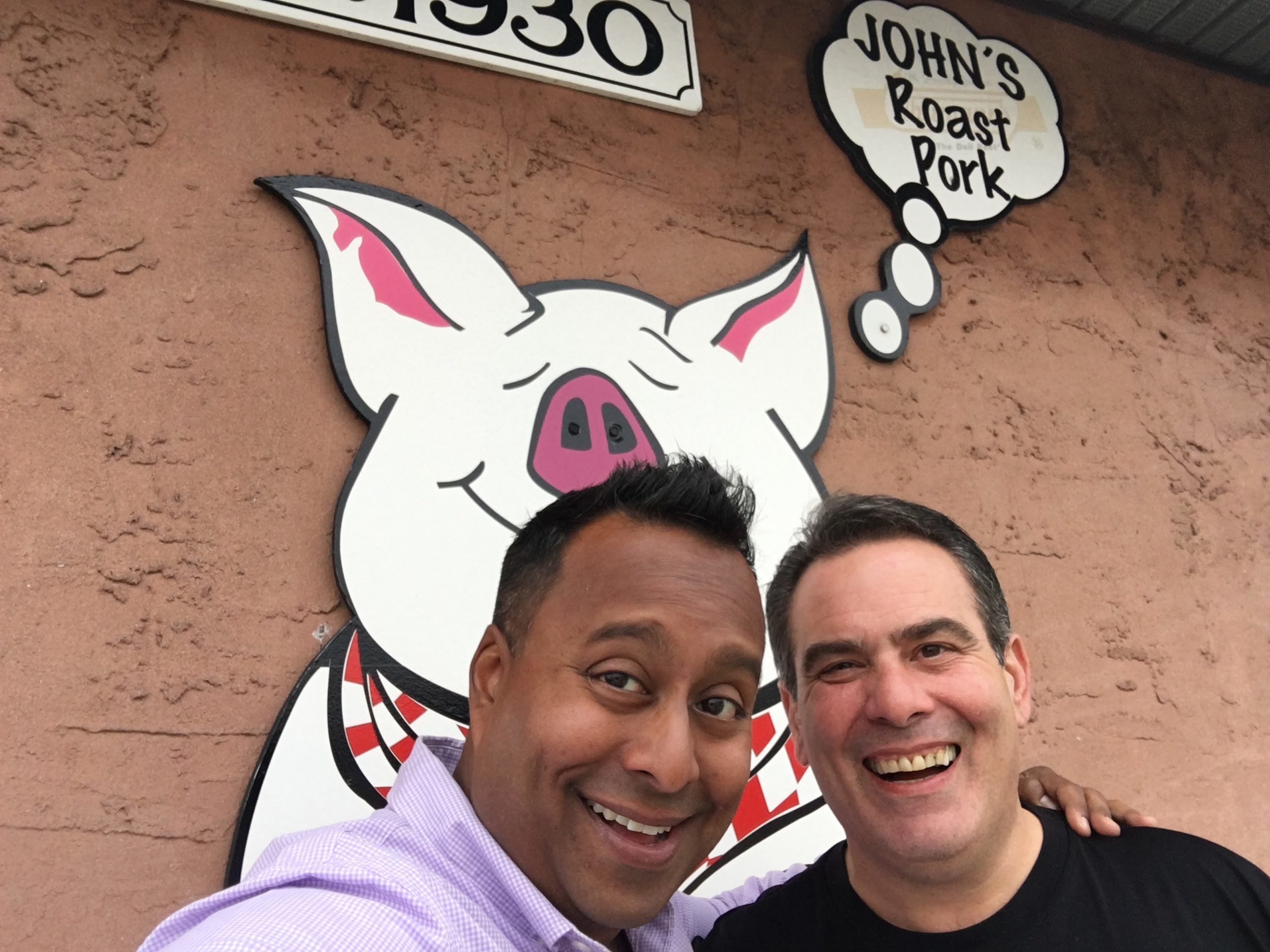 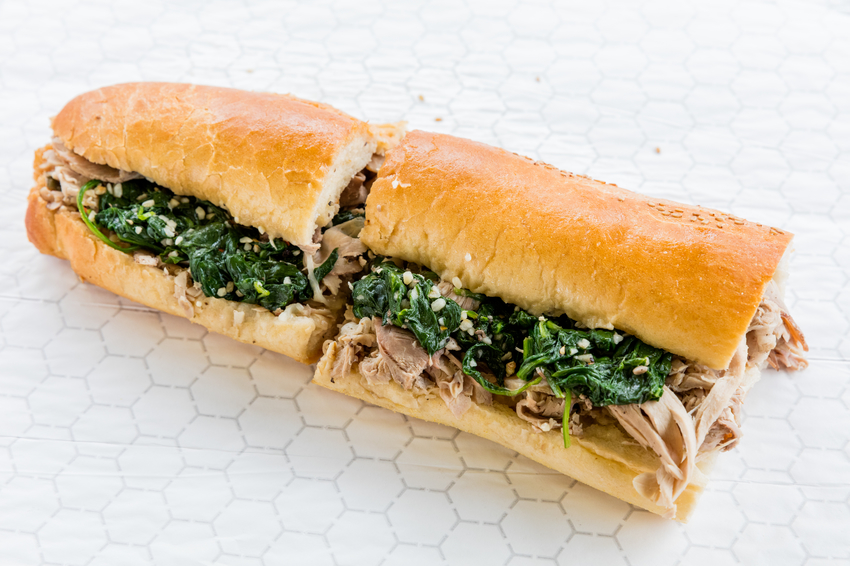 Yeah you heard me right: Roast Pork is THE sandwich of Philadelphia. Sorry cheesesteaks, you get all the love but when it comes down to a toe to toe, heavyweight Rocky vs Apollo Creed matchup, we end like Rocky 2 – Roast Pork wins by a KO. First off this sandwich is a meat lovers dream if you love well seasoned meat. Owner John Bucci has an 87 year old recipe(direct from Italy) for butterflying fresh hams, stuffing them with Italian seasonings and then roasting them for seven hours, resting it overnight and then running it through a deli slicer. Yes my friends in Chicago, this is Philadelphia’s answer to Italian Beef. And while there isn’t giardiniera to dress the sandwich, sharp provolone and garlicky spinach do the trick. Still need some heat? Spring for the longs hots, it’s a little extra but to be fair, this massive sandwich is really two meals, meant to be taken down in two parts. The first being when you scramble for a seat at John’s modest outdoor area as soon as you get your sandwich, and then promptly inhale the first half of the greatest sandwich style in Philadelphia. The second will be when you shamefully go after it in the fridge later that day or evening. One could say the small is the way to go at $6.50 but few have the will power to not spend another $2.25 and get the large. Maybe if I lived in Philly I would. But even then, what’s another $2 and change for the sandwich that could knockout Apollo Creed? 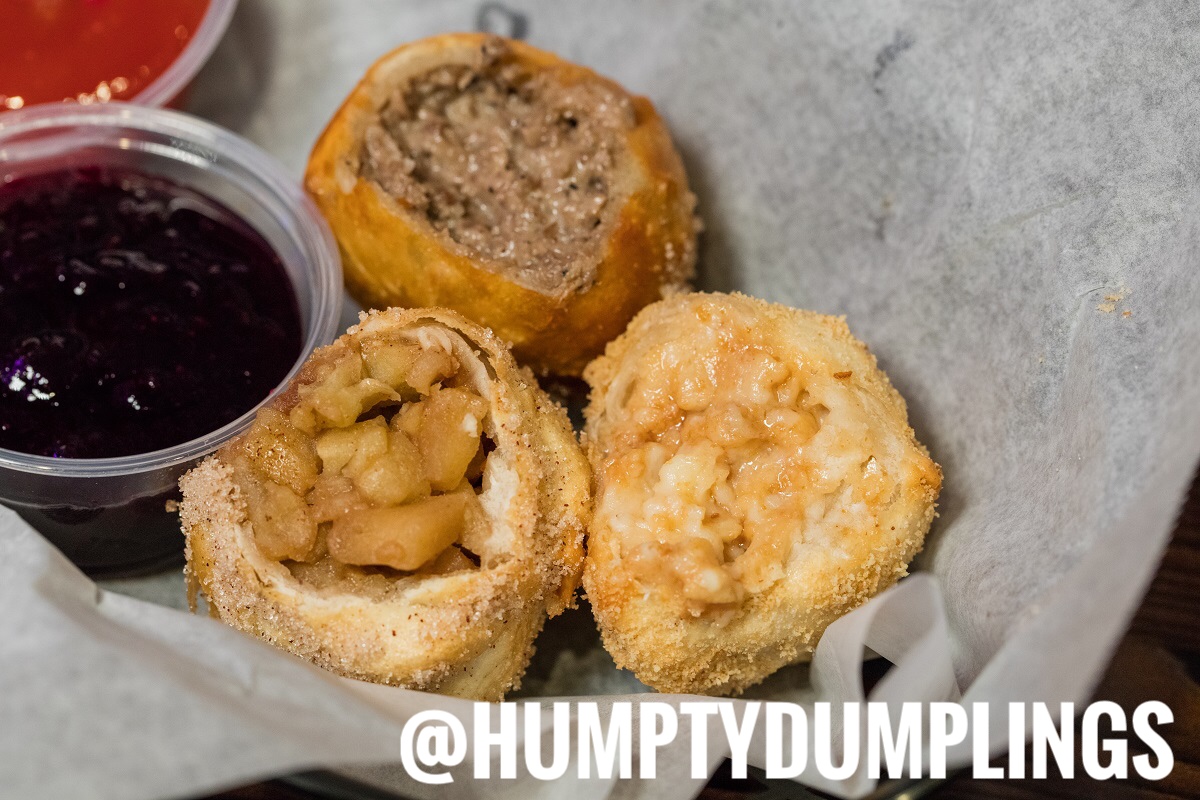 The Vitals:
the spot: Humpty’s Dumplings 705 E. Passyunk Ave. Philadelphia PA 19147
the eats: Cheesesteak, Cheesecake and Apple Pie stuffed fried dumplings
the bucks: $1 each on hump day or 5 for $7
the full nelson: not the frozen potstickers from Trader Joe’s you scarfed down in college

It should not be surprising that Humpty’s Dumpling was born from an evening of late night revelry. After all, wontons happen after hours. The guys behind Humpty’s are young lads who didn’t let the last round of drinks inhibit their culinary creativity. Hence a menu studded with a wide range of fillings from Apple Pie to traditional pork. Frankly I could have had cheesesteak wontons all day long but the idea of cheesecake in a fried wonton was to alluring. Your debate will be deciding whether to go sweet or savory here. Or maybe just leave it up to the Gods of Late Night. I hope you took an Uber there. 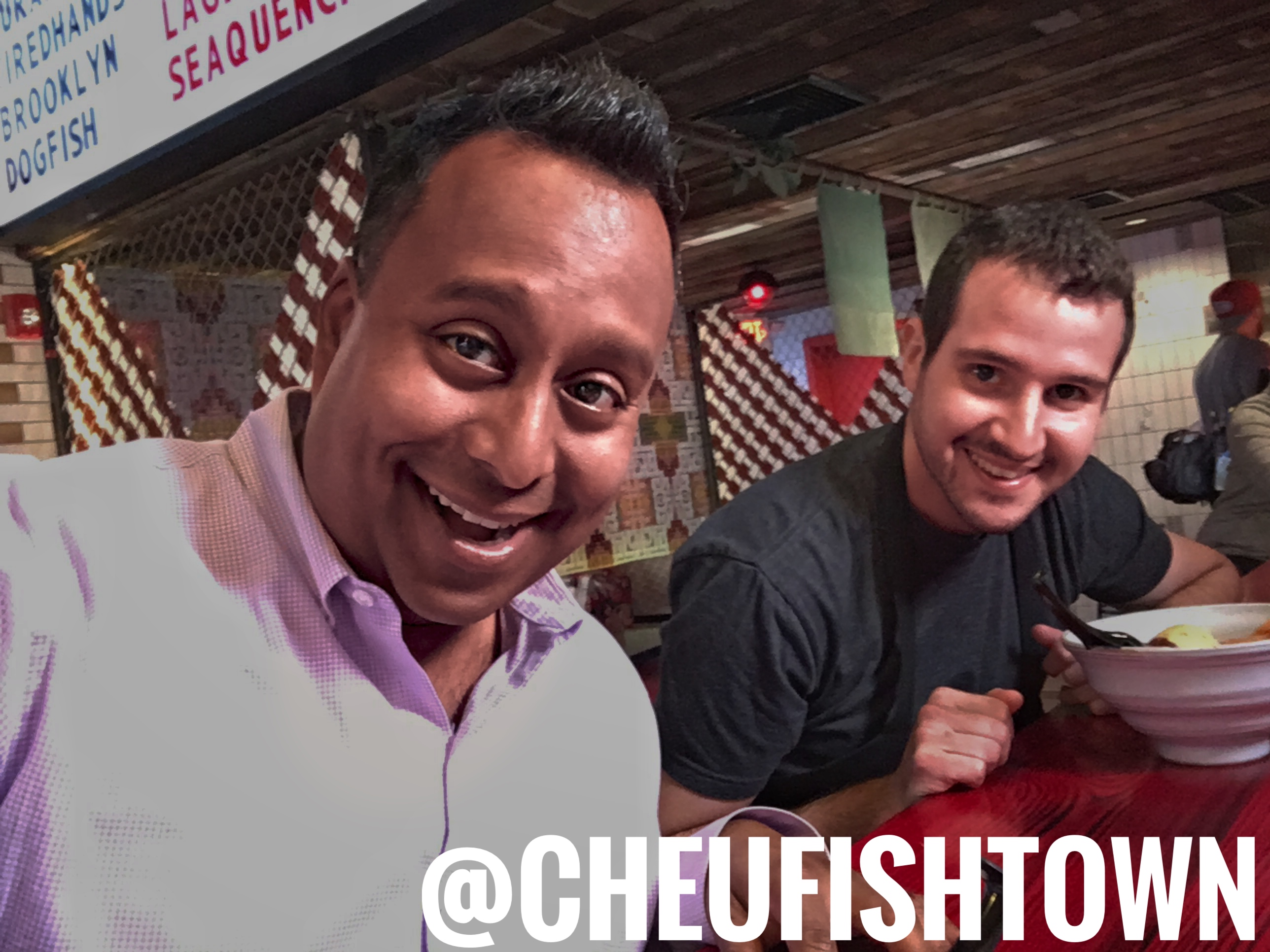 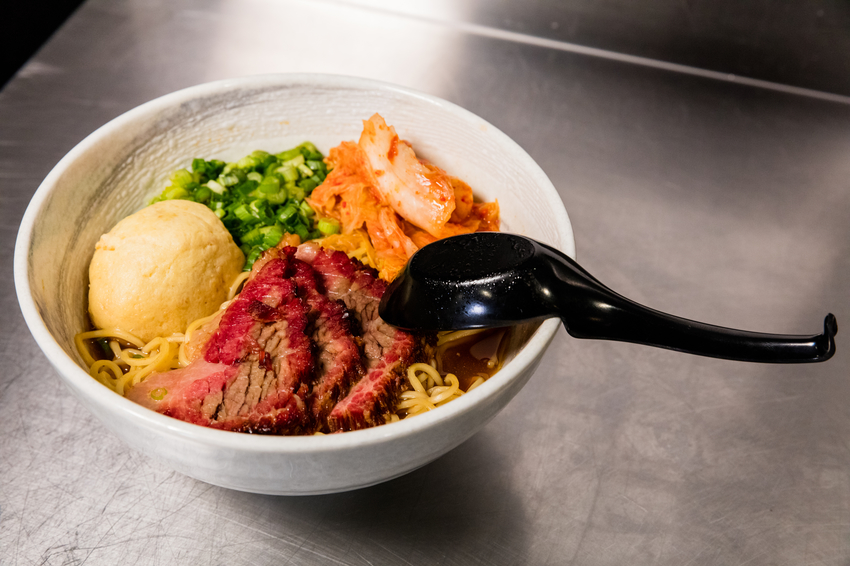 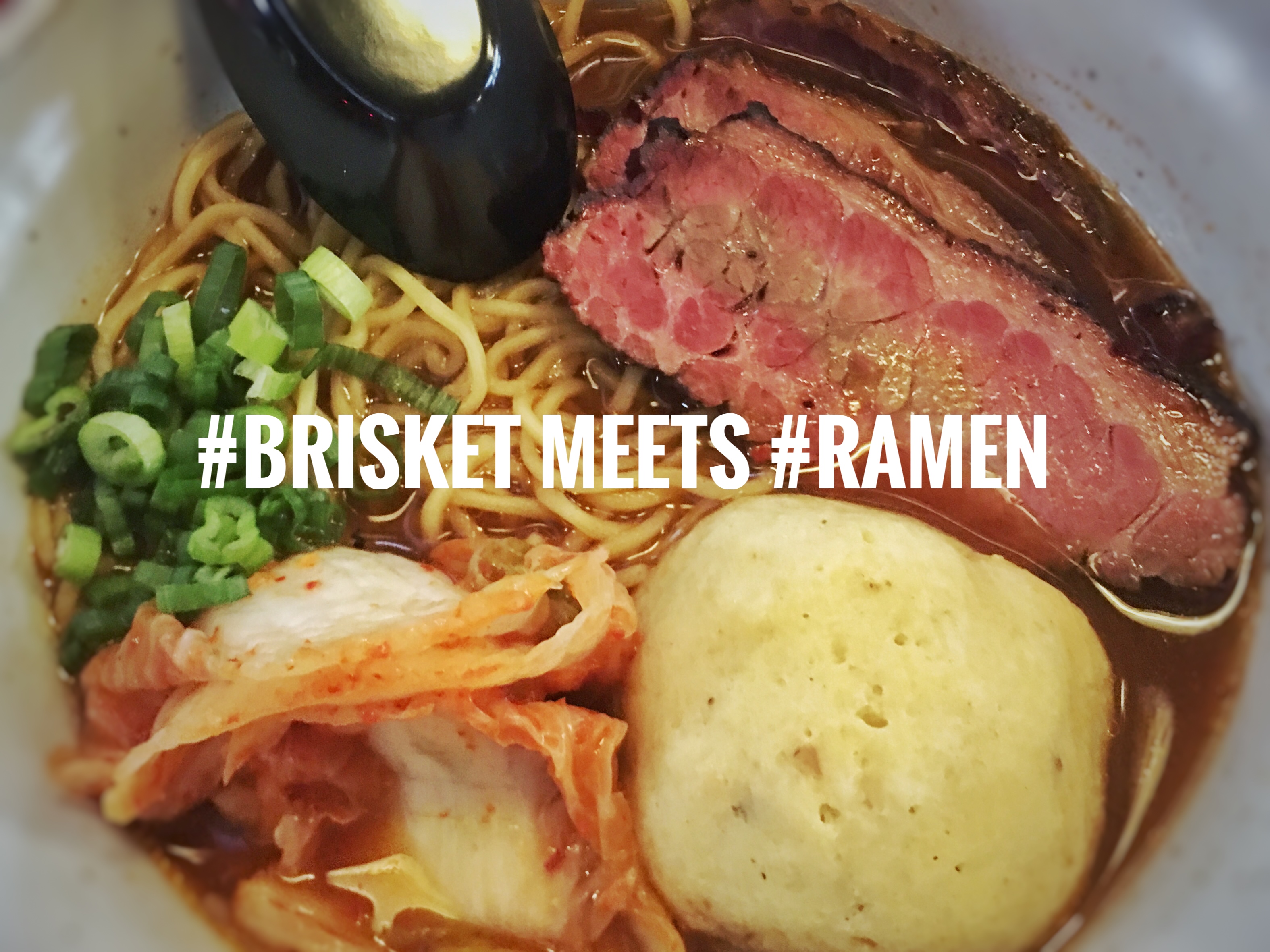 The Vitals:
the spot: Cheu Fishtown 1416 Frankford Ave. Philadelphia PA 19125
the eats: Brisket Ramen
the bucks: $14
the full nelson: Brisket meets Ramen. And nobody got hurt.

#Brisket meets #Ramen is pretty much why we are in such a golden age of food nowadays; taking long standing traditions and remixing them into something delicious and contemporary. Some may balk that if it ain’t broke, don’t fix it or that such food is simply “not authentic” and therefore has no value. I say let the cooks cook; there is always more room on my table for something different. The bottom line is mazto ball in ramen broth flat out works. And lately so does brisket in just about anything. I know I live in Austin and all but the sheer amount of brisket that seems to be popping up across the country is just astonishing. Like what bacon was to Brussels sprouts in the early 2000s so goes the tale of brisket here, there and everywhere. While the brisket and matzo ball stand out as true ramen interlopers, as well as nods to chef Ben Puchowitz’s Jewish heritage, there are other interlopers at play as well, and they hail from Korea: the Kimchi topping and the ssamjang and gochujang in the ramen broth. While the fun in ordering ramen comes from toppings, the broth is the foundation. So the addition of fermented soybean, chili and garlic, the base of gochujang and a main ingredient in ssamjang, are significant Korean signatures to the this Japanese classic comfort food. Toss in the fact that this was created in Philadelphia and you can pretty much toss traditional Japanese ramen out the window. But you won’t throw your wallet out the window because believe me $14 for this fat bowl of ramen is a some Bang for your Cheap Eats Buck. 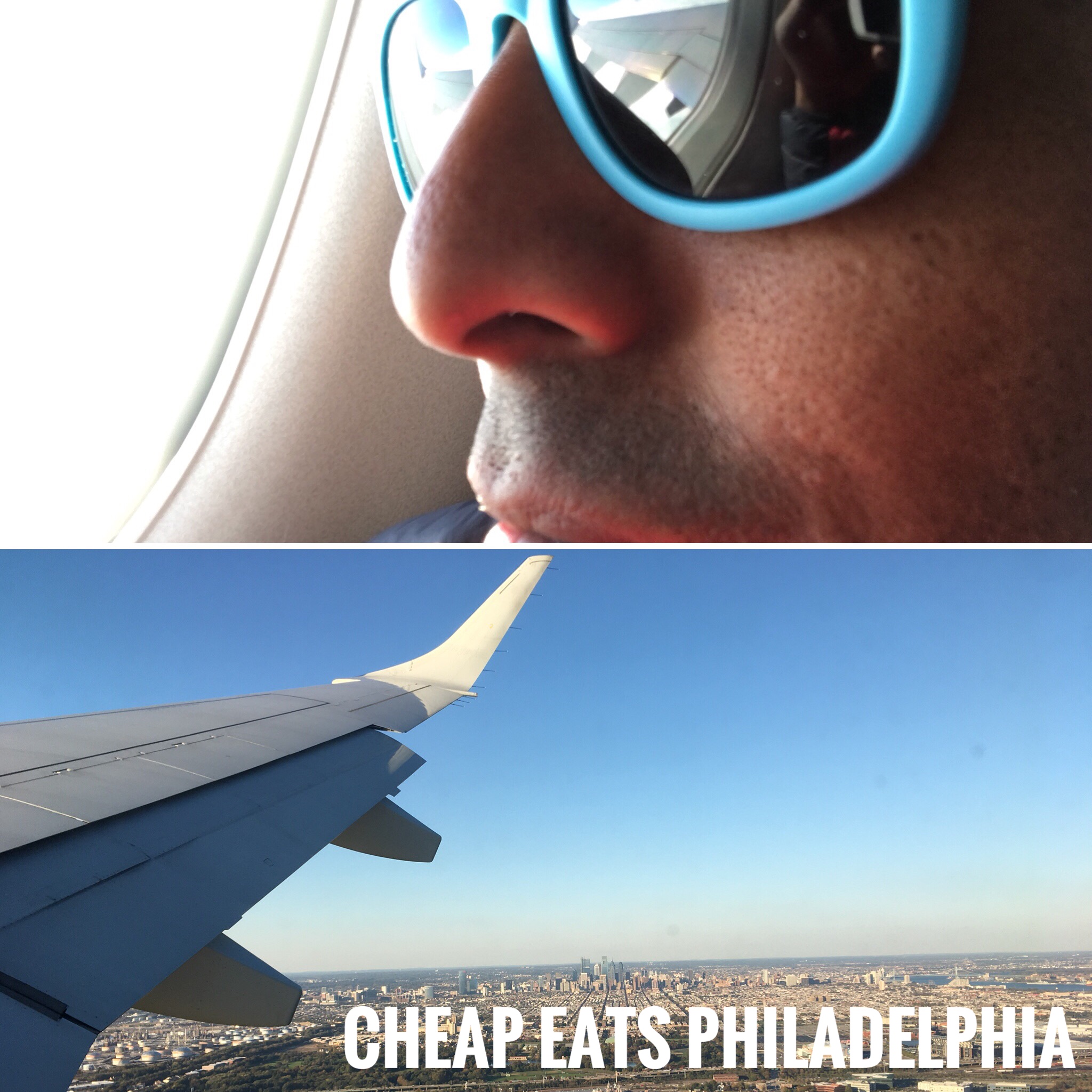 I’ve long held Philadelphia in high regard as a food town. From their slew of iconic eats like cheesesteaks and roast pork sandwiches, to top shelf eateries like Morimoto and Vetri, to sheer diversity with Pho, Ramen and hidden gem Chinese spots, Philly is the city of Brotherly Grub. And it is also a friend to anyone living on the Cheap, thanks to big portions in the sandwich department, BYOB policies for fine dining and an overall strong restaurant game that keeps chefs on their toes. And I am hardly the first to find these foodie truths to be self evident. Lastly, I would like to dedicate this post to food writer and food blogger Hollister Moore, whose blog Holly Eats turned me on to John’s Roast Pork and many other restaurants in the Philly area and beyond, as well as the work of iconic food writer Calvin Trillin. Holly left us last summer but his legend lives on. And so does the legend of Cheap Eats Philadelphia. 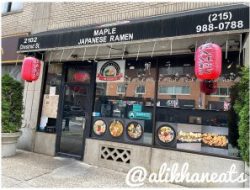