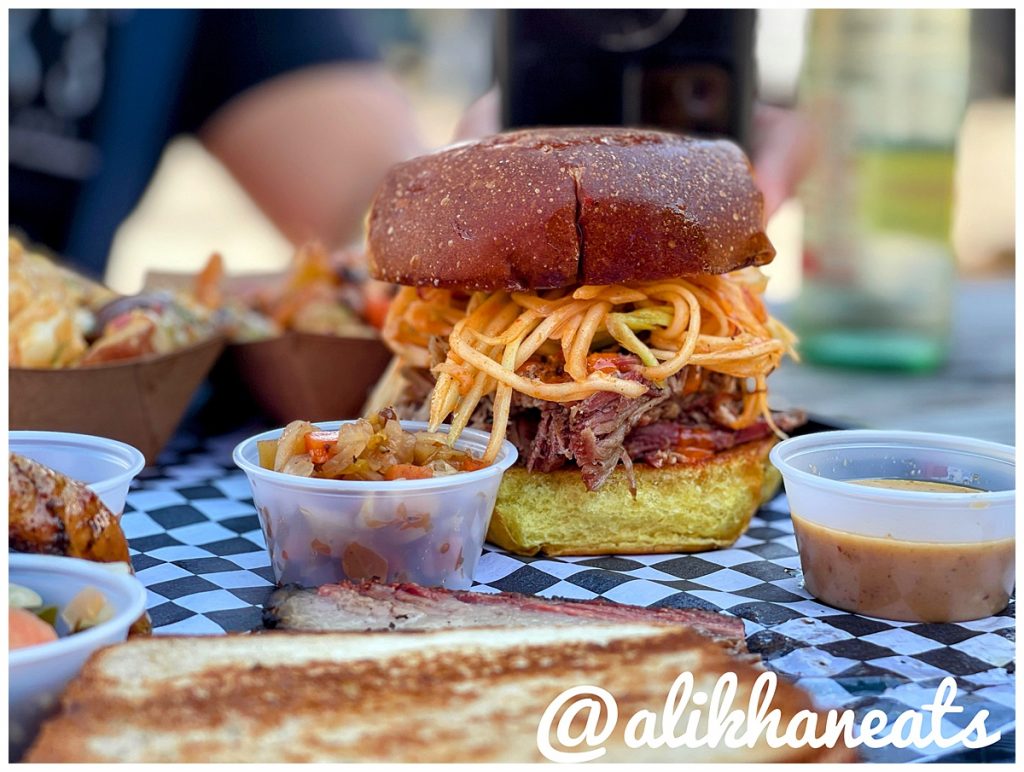 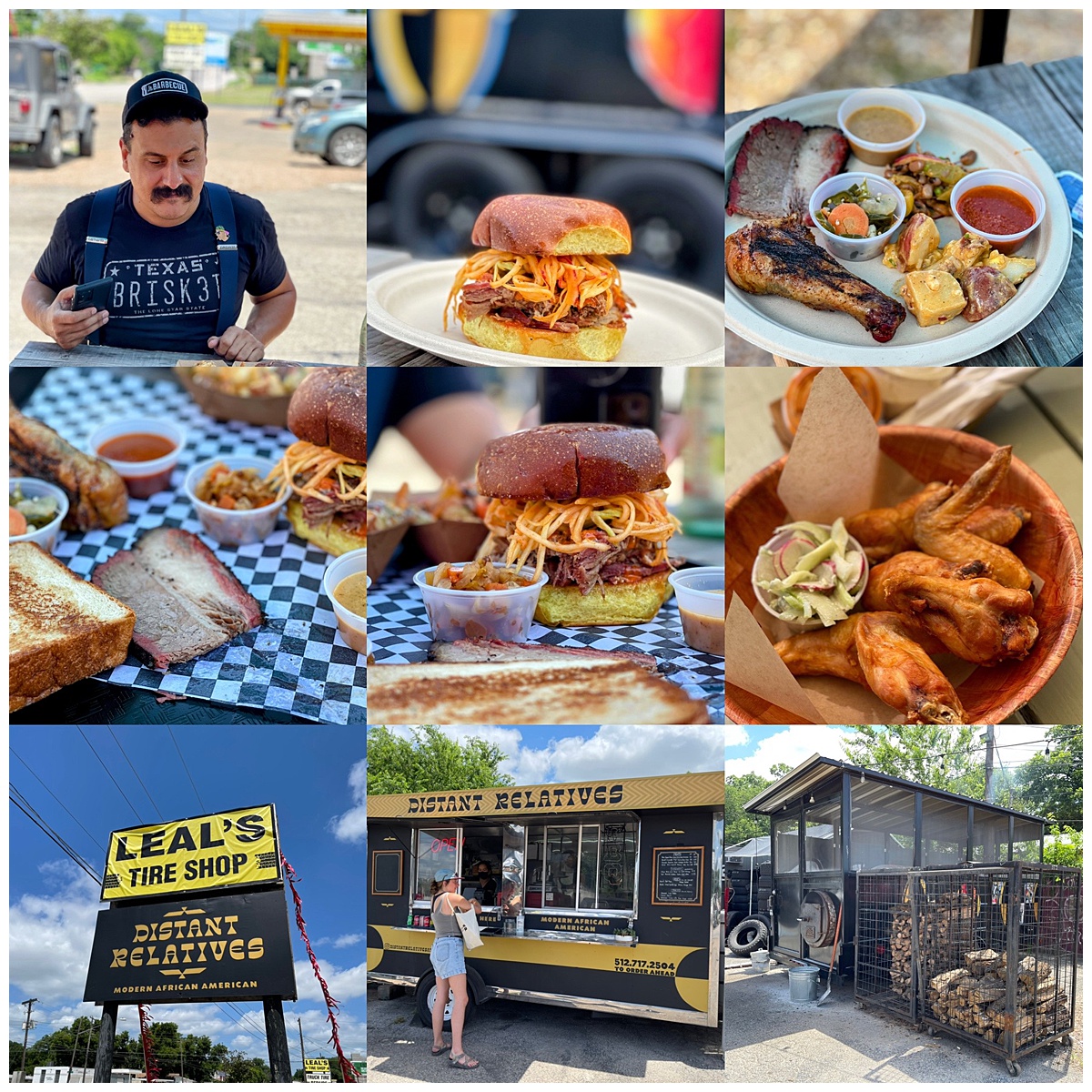 The Vitals:
the spot: Distant Relatives 3901 Promontory Drive Austin TX 78744
the eats: Mribs, chicken, pulled pork sandwich, all the sides
the bucks: $10-$20 a person
the full nelson: a new chapter in Austin’s BBQ scene and maybe in the history of BBQ

Distant Relatives recently was named one of the country’s best new restaurants by Eater. That’s a pretty big deal.

But what’s an even bigger deal is the new chapter of barbecue that Chef Damien Brockway has embarked upon. The former fine dining chef has taken the barbecue reins not just as the latest entry among craft barbecue specialists but as an African American celebrating African American foodways. Brockway is tracing the lineage of African ingredients as they present themselves in barbecue, choosing each ingredient based on this research. It’s about what’s not on there as much was what is. Like black eyed peas, bird chili and grains of paradise being utilized versus pinto beans and a BBQ rub heavy on the black pepper. 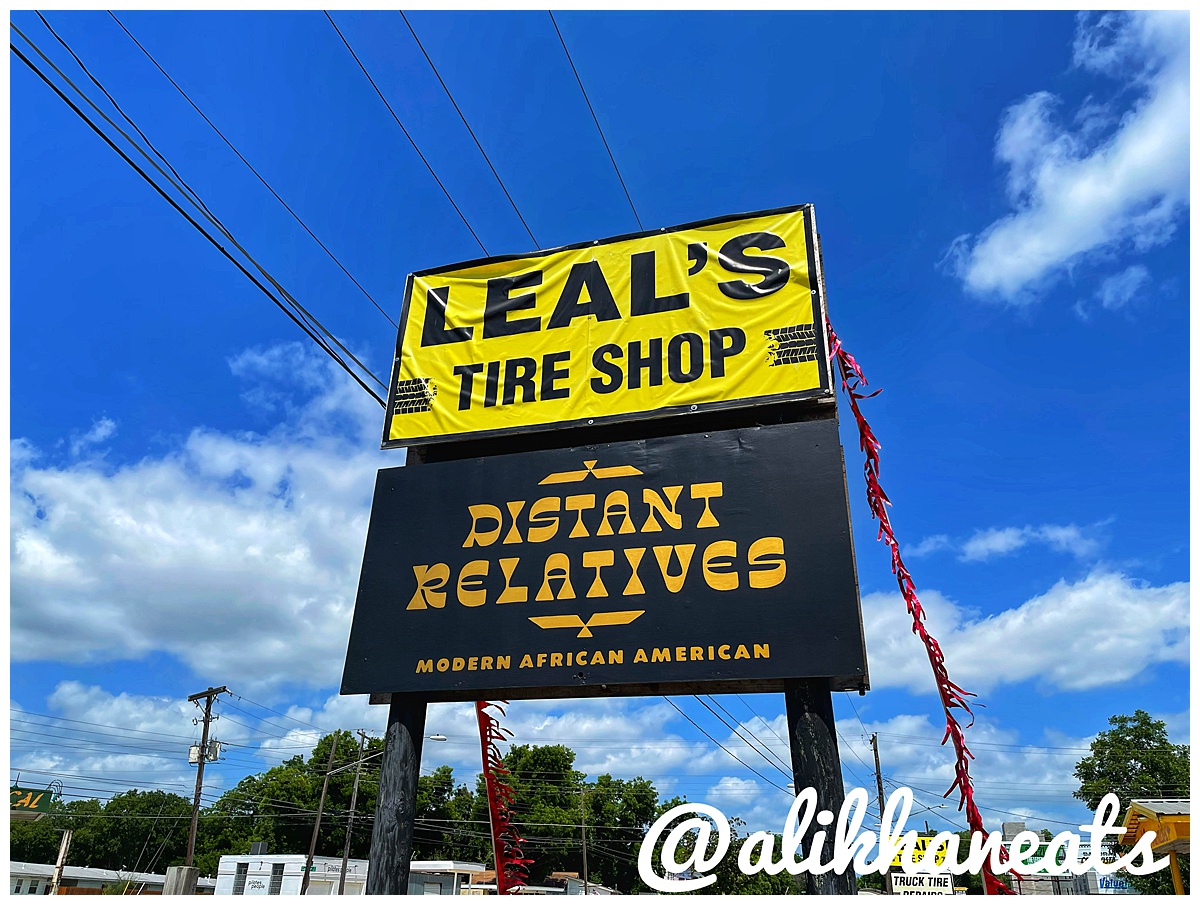 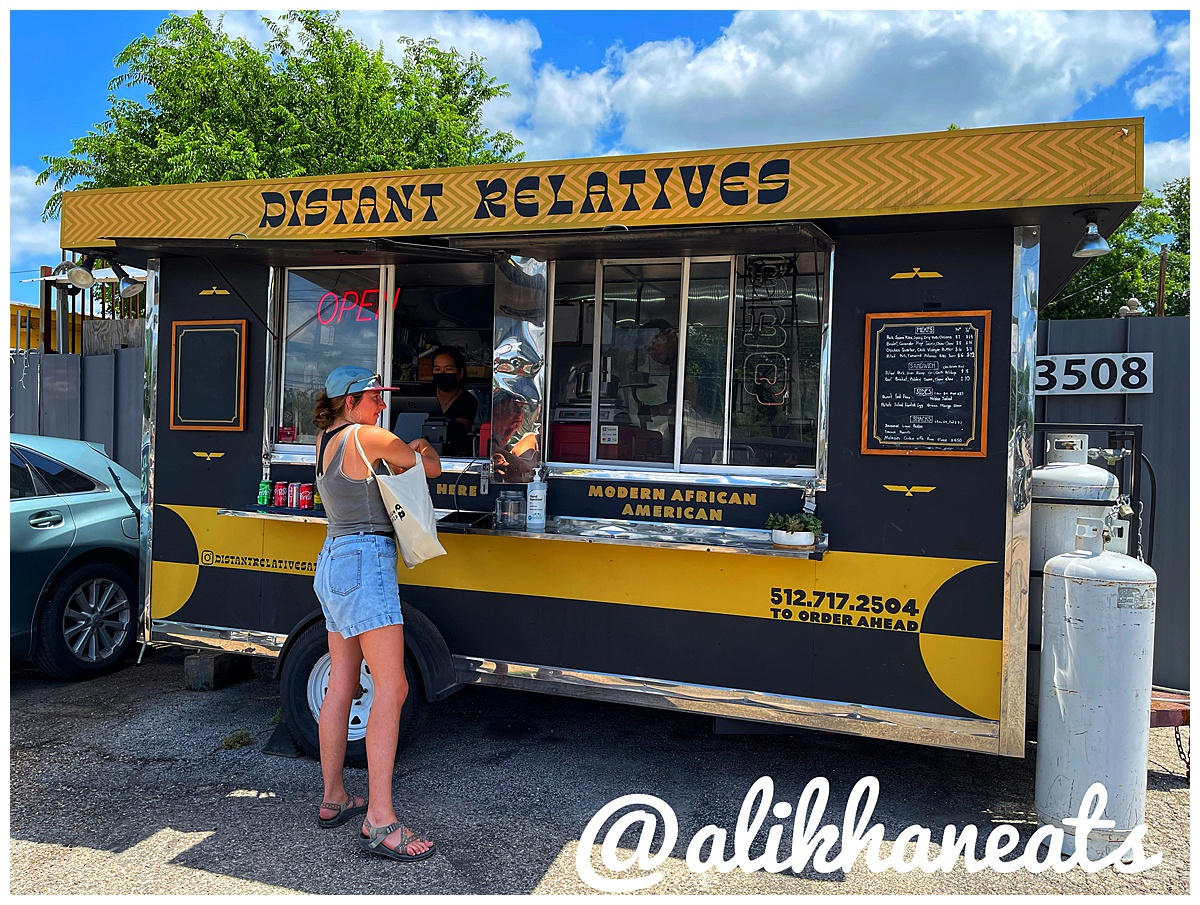 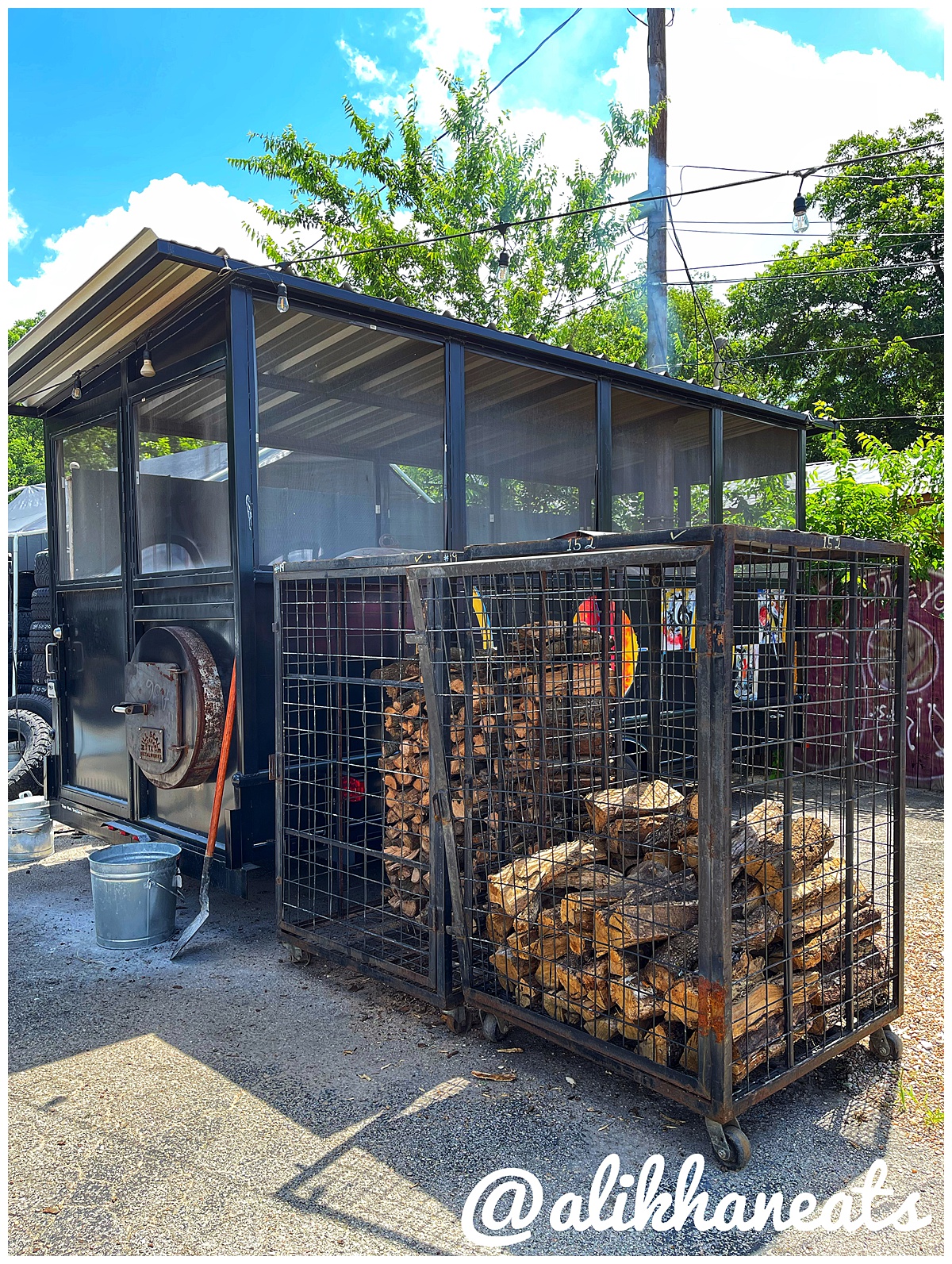 I visited Distant Relatives back in June. They were about a week away from moving to their present location at Meanwhile Brewing, joining Pueblo Viejo and Doughboys, respectively some of my fav tacos and pizza in town. Meanwhile is nicer digs but there’s something about being situated next to a blue collar business like a tire shop that says “if you cook it they will come”.  Maybe that’s just the years of hood taco eating but either way I’d go just about anywhere to eat at Distant Relatives. 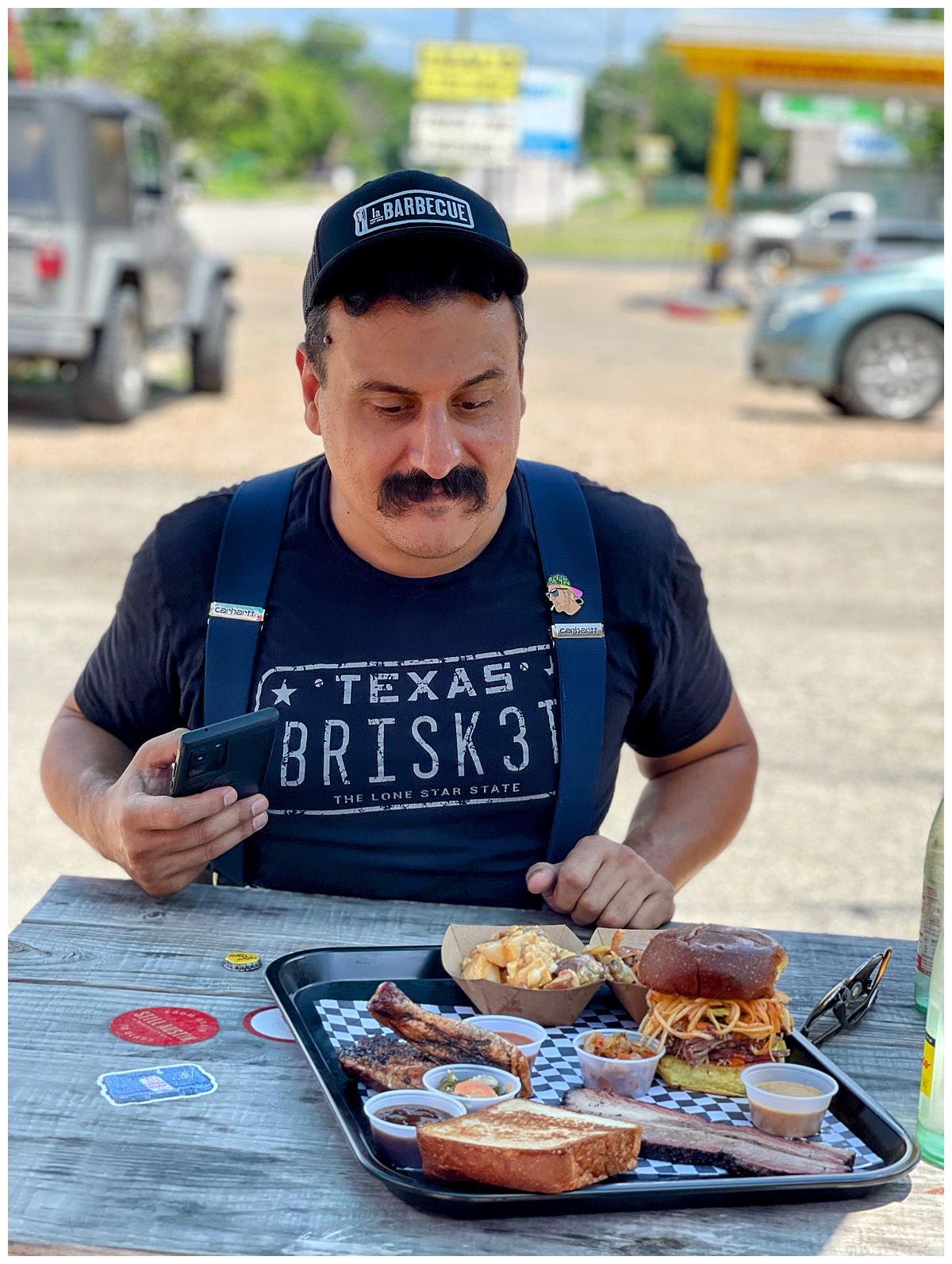 I was out scouting some barbecue joints and brought Yoni Levin with me. If you don’t know Yoni, check out his podcast Best BBQ, and you’ll soon find out that he has a deep love for the craft of smoked meats. Spoiler alert: his fav place is Snow’s BBQ which I’ve written about in the past. Another spoiler alert: he was also a fan of Distant Relatives. 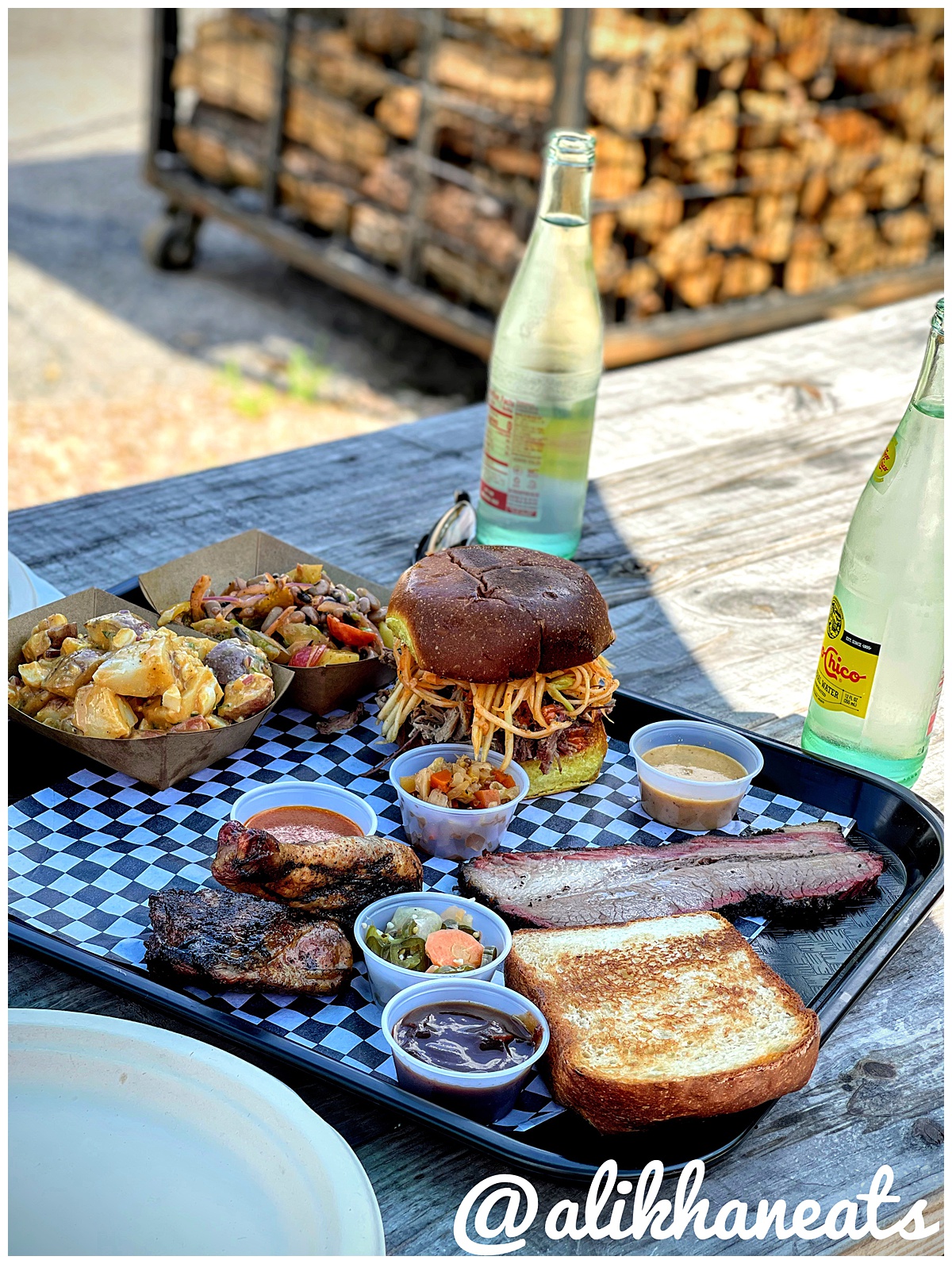 So the two of us tackled some brisket, ribs(not pictured), bone in chicken, pulled pork sandwich, black eyed peas, and potato salad. Honestly I would come here for the black eyed peas alone then go to Whole Foods and mock everyone in line at the salad bar. Beyond tasting the chef’s hand at what can seem like common place dishes, it’s the seasonings that really make an impression.

Especially with those black eyed peas. I felt like I was eating something closer to Ethiopian food than barbecue and that was because of the flavor profile of the seasoning. Chef Damien, like any good chef doesn’t give away too much but I do know that if I want to taste these flavors again, I need to meet a chef from West Africa. And yes, I was way off with my Ethiopia comment. But it goes to show you how limited we are in our exposure to food from the African continent. 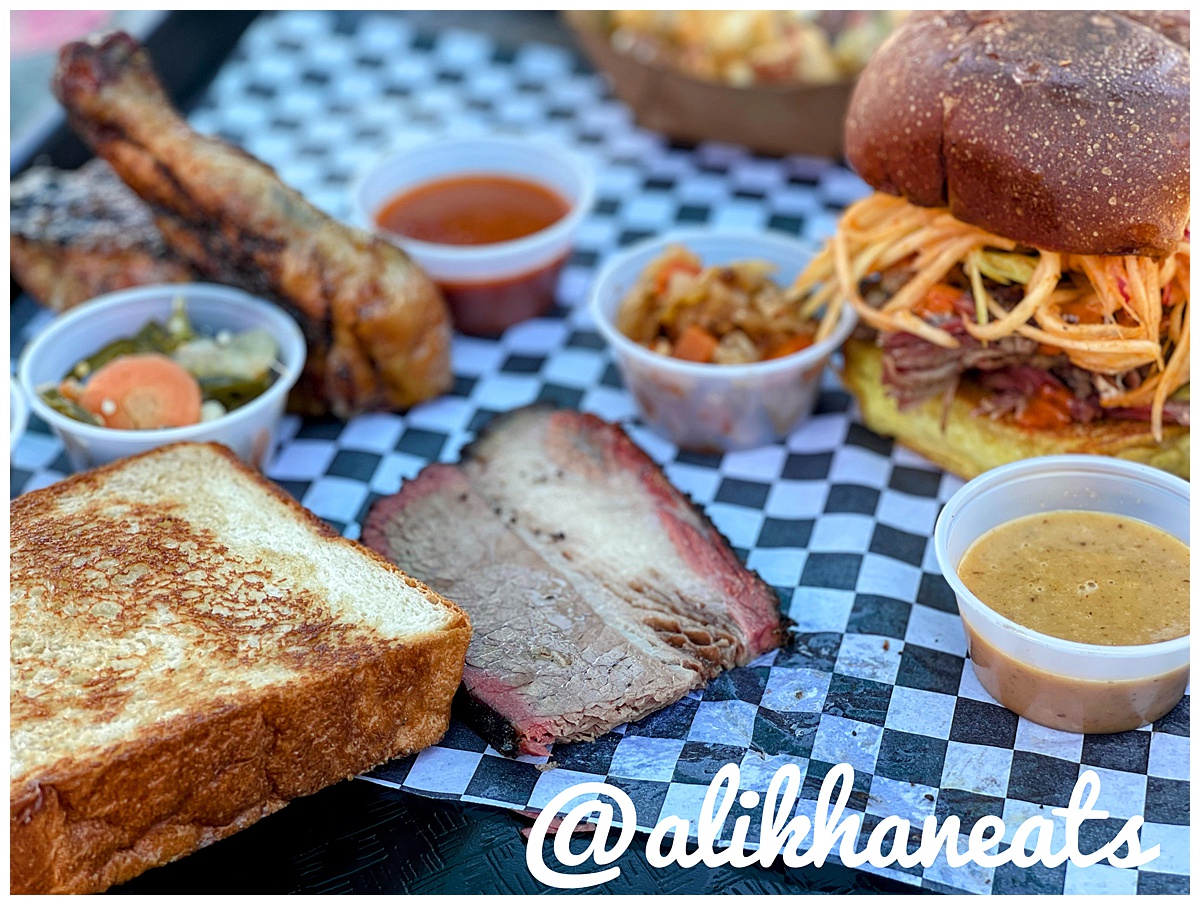 Honestly it doesn’t matter. I’m a moist guy and while that slice looks far from dry, it was actually lean and technically not my jam. The fair thing to say is I have had better brisket elsewhere. And then we move on to what I had that has no equal in Austin. 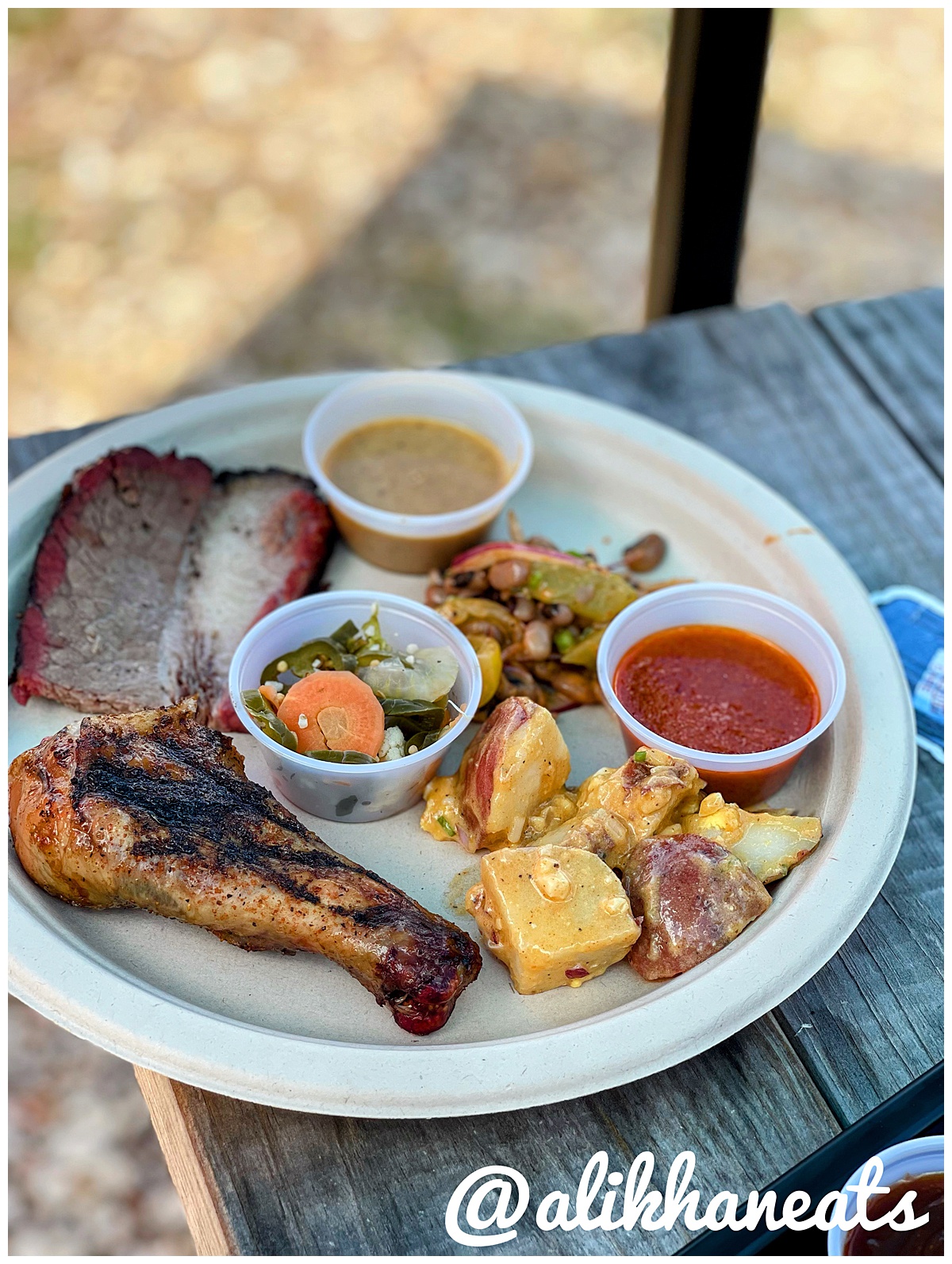 I swear by this chicken

So anyone coming from the South would trip when I said “you don’t see chicken ordered that much in BBQ joints in Austin”, but you don’t. If anything, smoked turkey steals the poultry spotlight and frankly, that turkey is good. The thing is, bone in dark meat chicken is a BBQ delicacy all its own and an opportunity missed by diners when you taste the chicken at Distant Relatives. It’s also a protein that shines with sauce. Chef Damien has a dark and intense molasses sauce and a vinegar based one. And they both hit like guac on a chip. 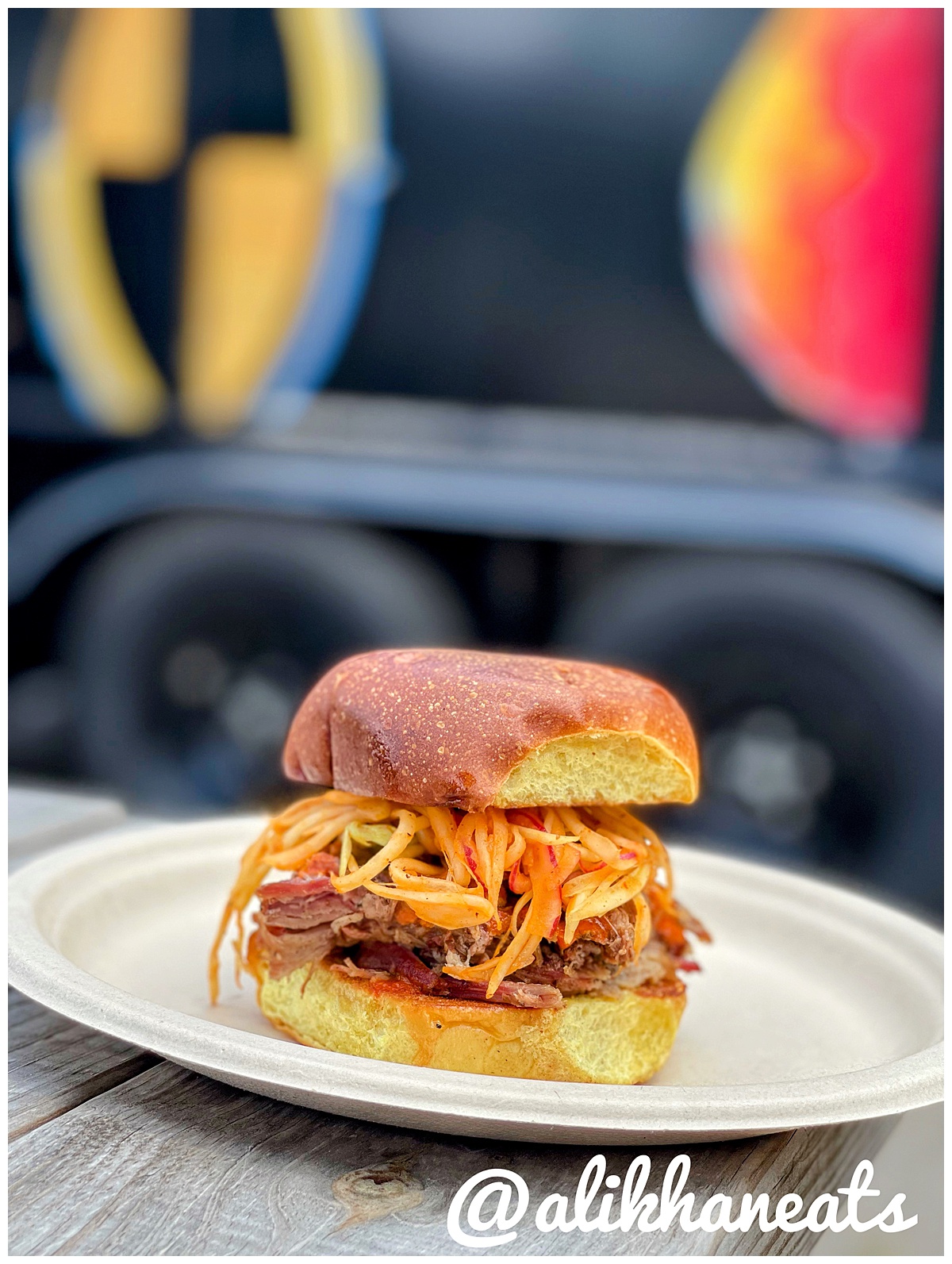 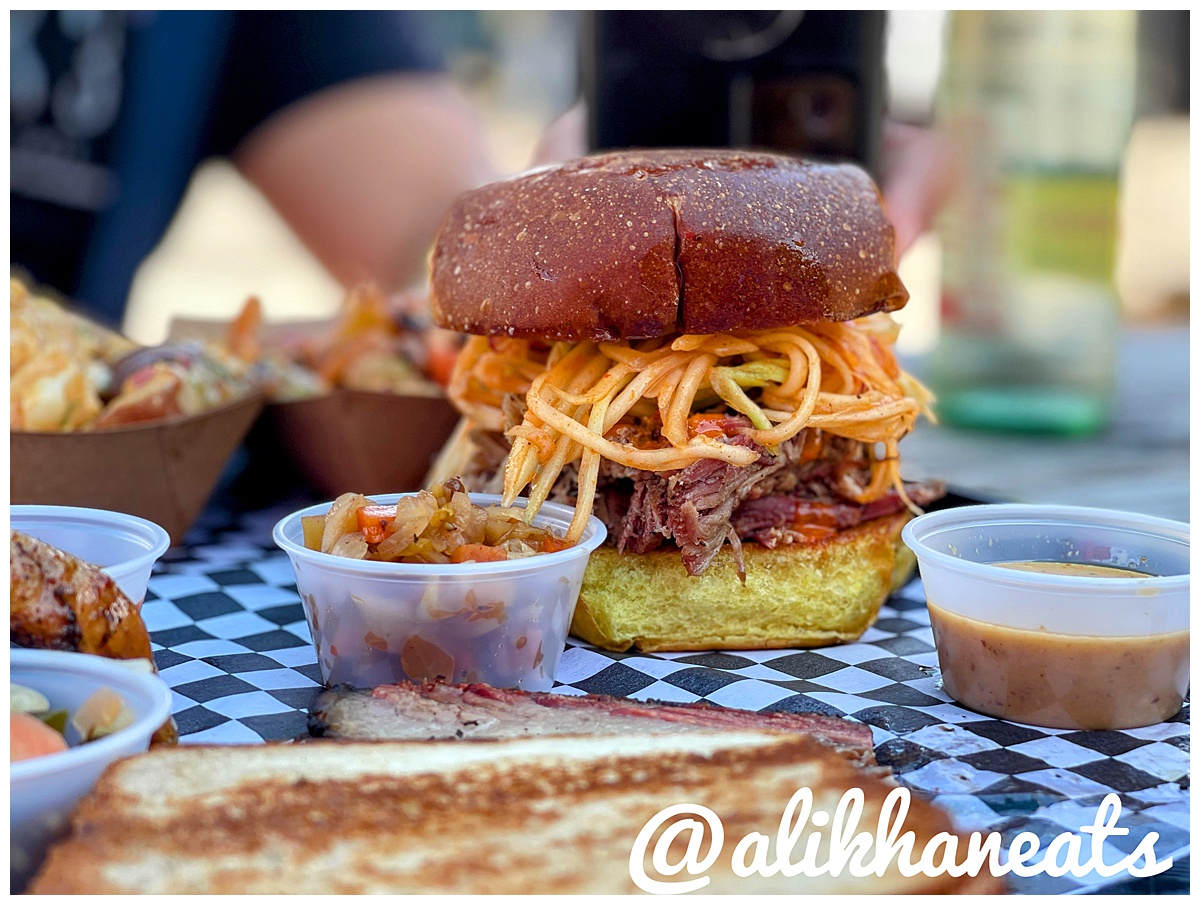 Tell your Carolina friends about . . .

. . . the pulled pork sandwich. Not so much because it is an homage to their style of barbecue but because it is an example of how some barbecue is just better on a bun. That’s not spaghetti on top either, it is coleslaw.

Distant Relatives is a gift to our current barbecue renaissance. And it becomes an answer to a fair question posed by First We Feast years back about how the obsession with brisket marginalizes barbecue’s African American roots. There’s more to barbecue than brisket or whatever else might be trending right now. There is an important history that’s tied barbecue: a story of people brought in bondage who brought with them a rich culinary tradition. A tradition that sowed the seeds of what has become the most American of foods: barbecue. Distant Relatives is a reminder about how this cherished American food came to be, and it’s a delicious reminder at that.