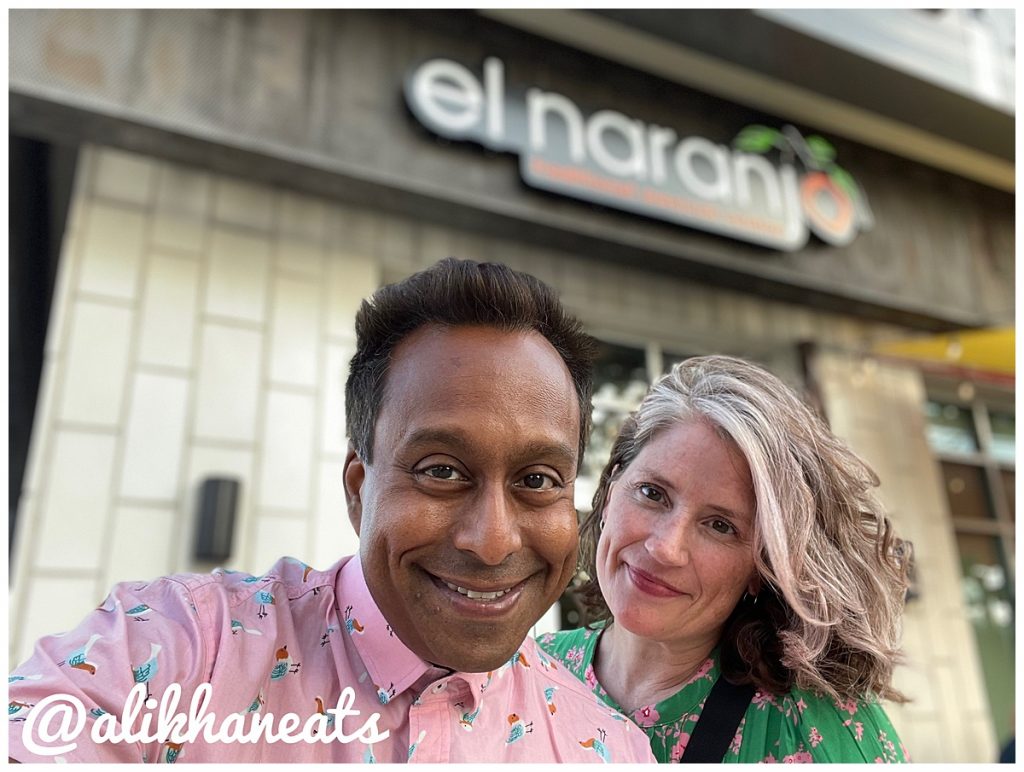 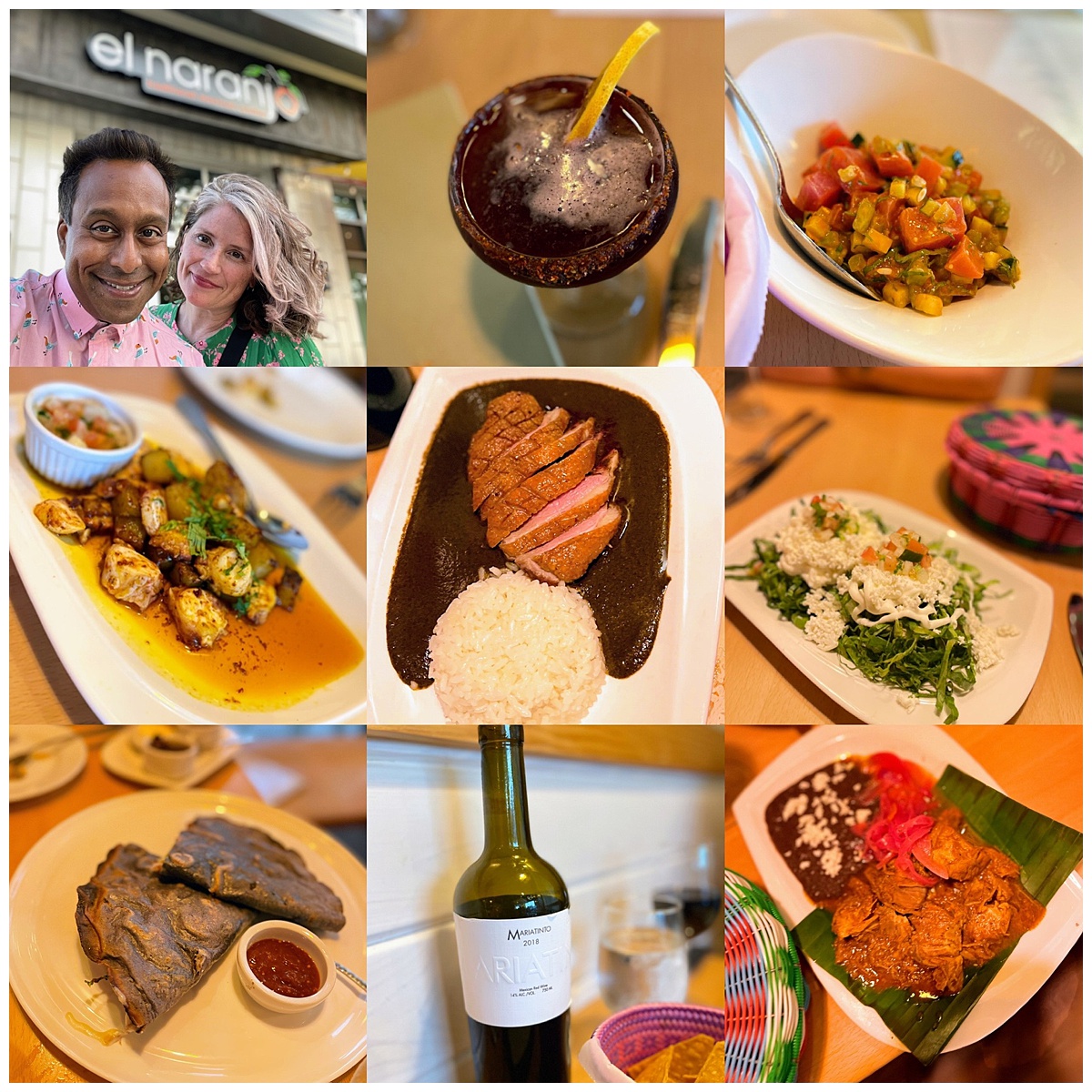 Back in April I visited El Naranjo in Austin TX. The Oaxacan restaurant had been on my list for sometime. First off, I’m always ready to try regionally specific cooking of any country. Oaxaca isn’t just any region though. Famed as the land of a thousand molés, there’s more to the Southern Mexican state than the dark brown sauce that coats braised chicken and seared duck.

First off there is more than one kind of mole and the dark brown stuff with hints of chocolate and cinnamon are the tip of the iceberg. In fact so is mole when it comes to Oaxacan cuisine. Before this becomes a deep dive into a state in Mexico that counts dozens of languages predating the Spanish conquest, a remarkable amount of microclimates and biodiversity and perhaps the country’s most famous chef as a native son, let’s just go into a picture driven play by play of what I ate at a restaurants whose chef eventually would win a James Beard award for Best Chef Texas this year. Yeah that was a mouthful, but so was this: 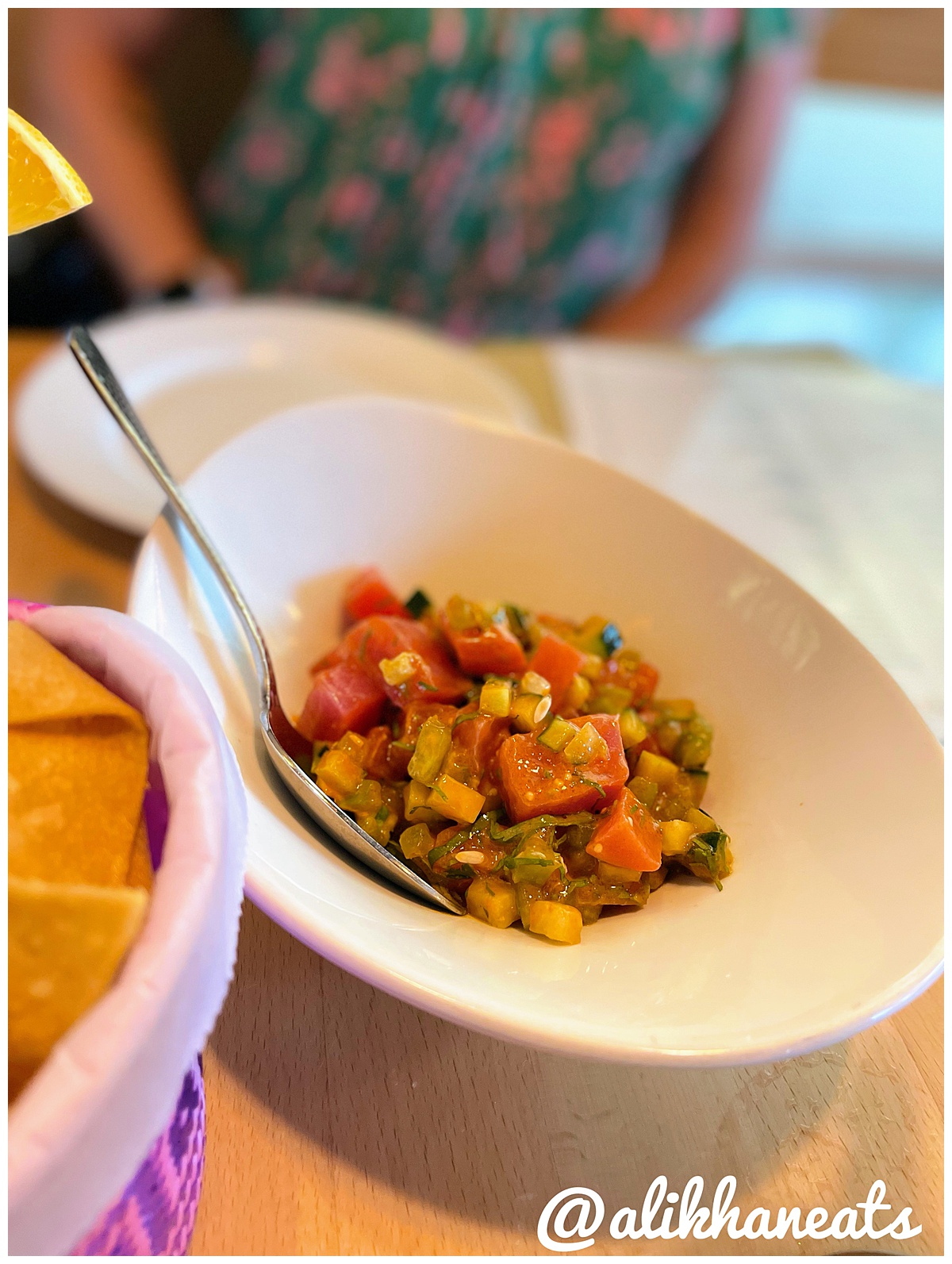 I’m always up for a taste of raw tuna to start a meal and I adore ceviche. I can’t say this was the best dish I had that night nor was it among the better ceviches I have had in town. You could skip it but don’t skip this. 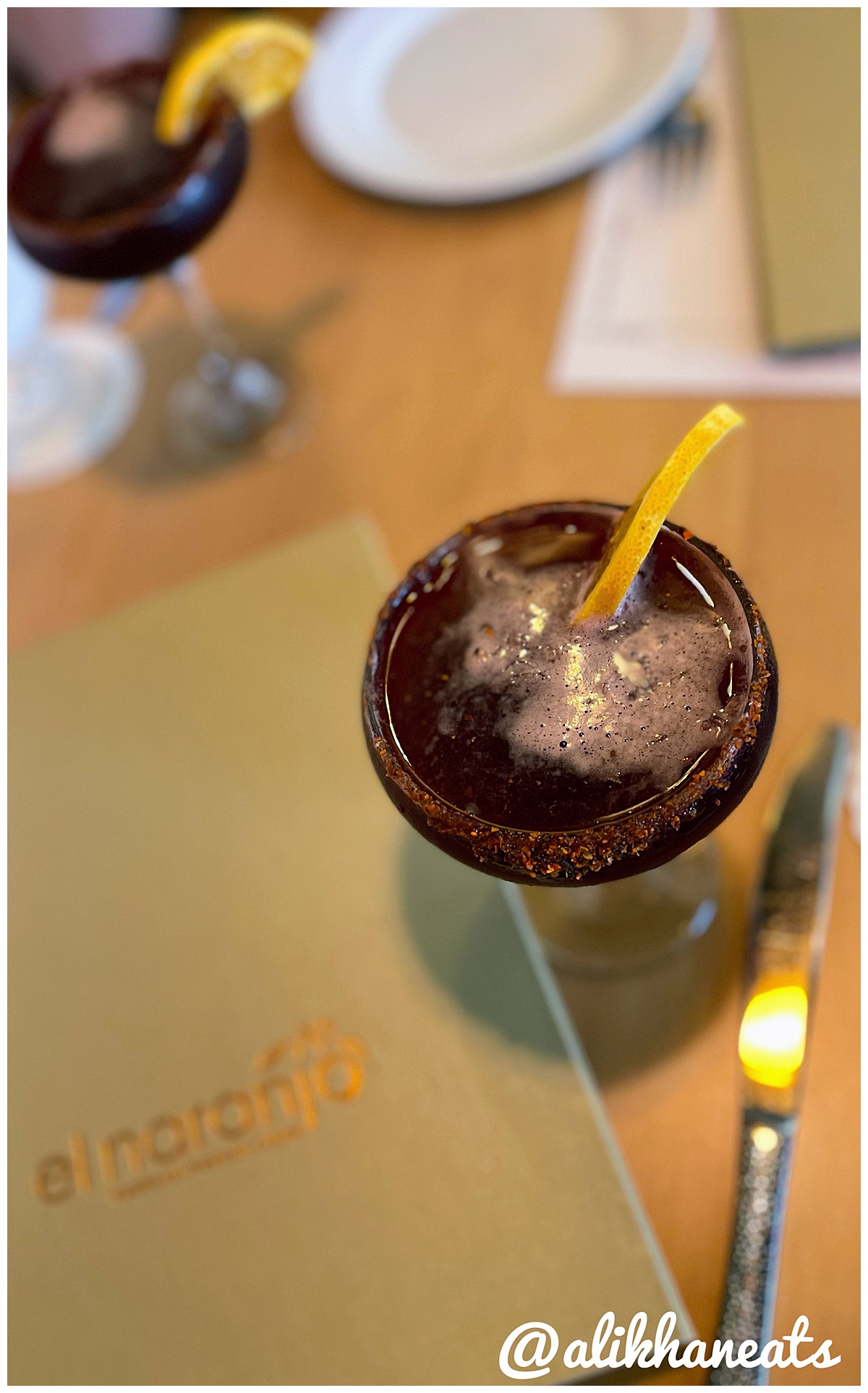 Excuse the all caps but this drink deserves that say it loud effect. Mezcal, a liquer made from Ancho and Poblano peppers, hibiscus tea, and lime juice make for a drink you could drink all night. But I had other plans. 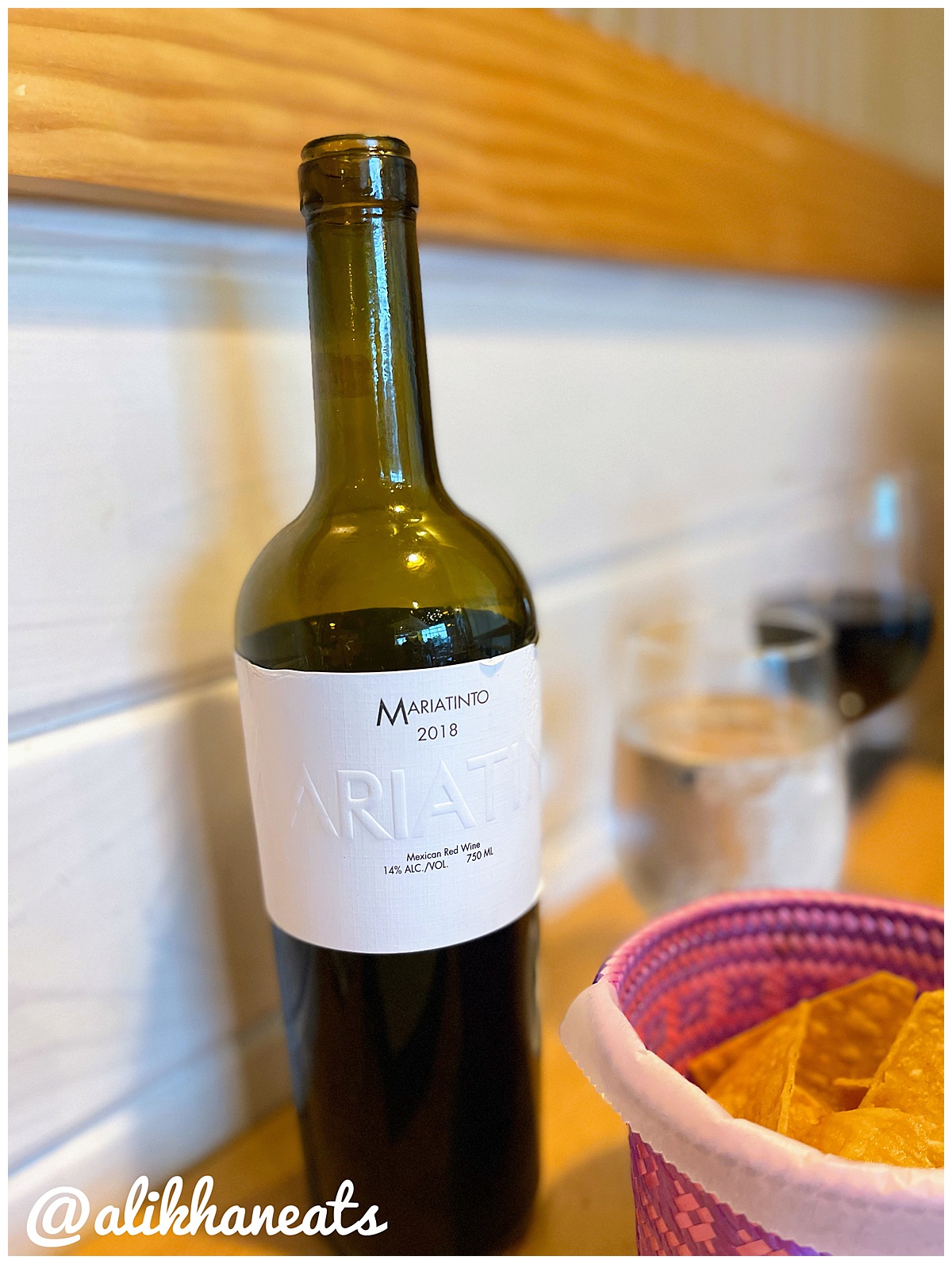 You can get beer and margaritas at any Mexican restaurant with a liquor license. Take advantage of El Naranjo’s Mexican wines like this Syrah blend from Baja California. Back when I lived in Los Angeles we would take excursions down to Valle de Guadalupe, Mexico’s wine country which is also home to an incredible Mexican meets Mediterranean cuisine. I also got married at a winery down there so I can’t not try a bottle.

Think of this red as something closer to a Southern French red from the Rhone Valley. This is the kind of red wine that won’t be the heaviest on its own but will pair very well with intense meats dishes like braised lamb and steaks cooked over charcoal. Or a seared duck breast in a molé . . . but I am getting ahead of myself. 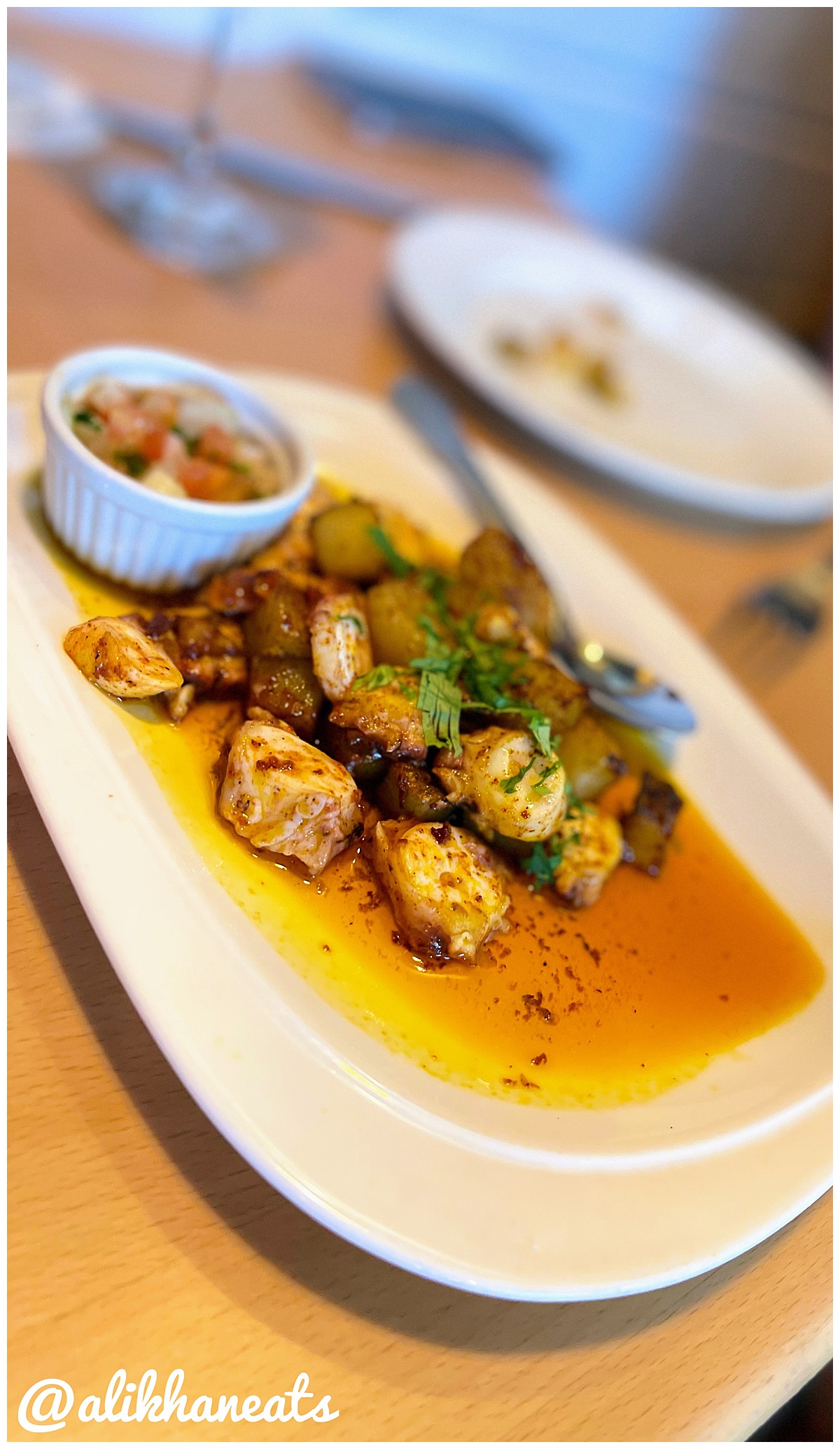 My second fav dish of the night

Octopus is cooked in a sous vide and then sliced and tossed with diced roasted potatoes in a chili oil. My eyes rolled back in my head as I ate this. Octopus is butter when it’s cooked till tender and that is a painstaking process. A sous vide is what you pay the big bucks for at a place like El Naranjo and it works. The chili oil reminded me of the separated layer of oil in a Bengali curry my aunties would make. This dish is a must order. 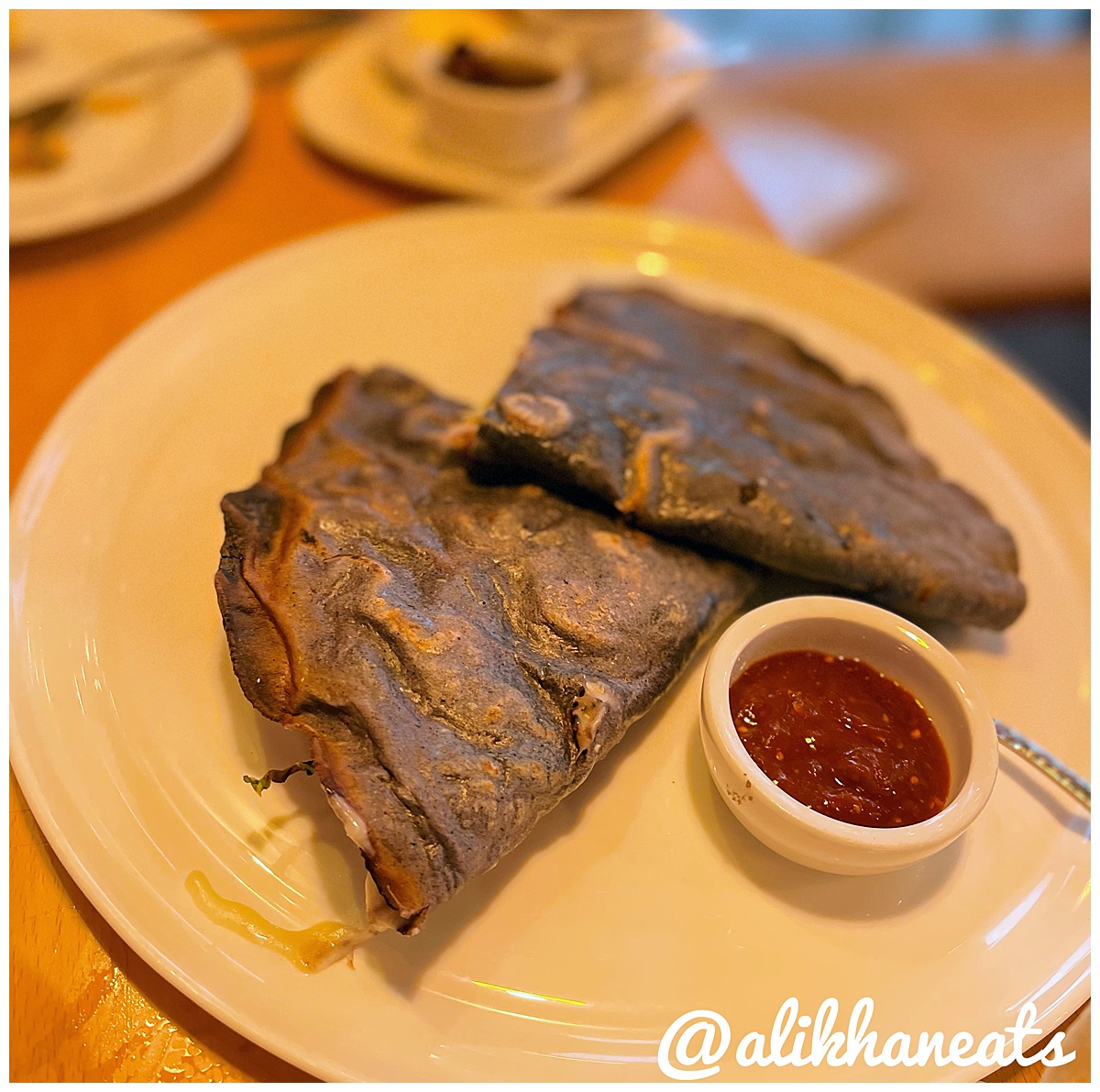 I’m not biased for blue corn but at times it is a sign of Nixtamalization which is corn made the right way. That means making tortillas the old fashioned way which is fast becoming extinct thanks to modern conveniences. Beyond altering corn production into a dark dystopian future, shelf stable tortillas taste like eating cardboard compared to the real deal, and drowning it with salsa is often how one makes it palatable. Not the worst fate but there’s a better way to eat masa.

What happens when you use heirloom corn and it’s nixtamalized? The toast off the blue corn gives off a wonderful nutty aroma. The fiery salsa roja cuts through the beans and queso nicely. The only downside to this dish is that it is filling and does bring up an interesting point: menu labeling. Some plates are bigger than others and you can easily fill up if you happen to be a party of two. This Tlayuda could put a dent into you soaring through the menu. Luckily I had a dish to reinvigorate my appetite. 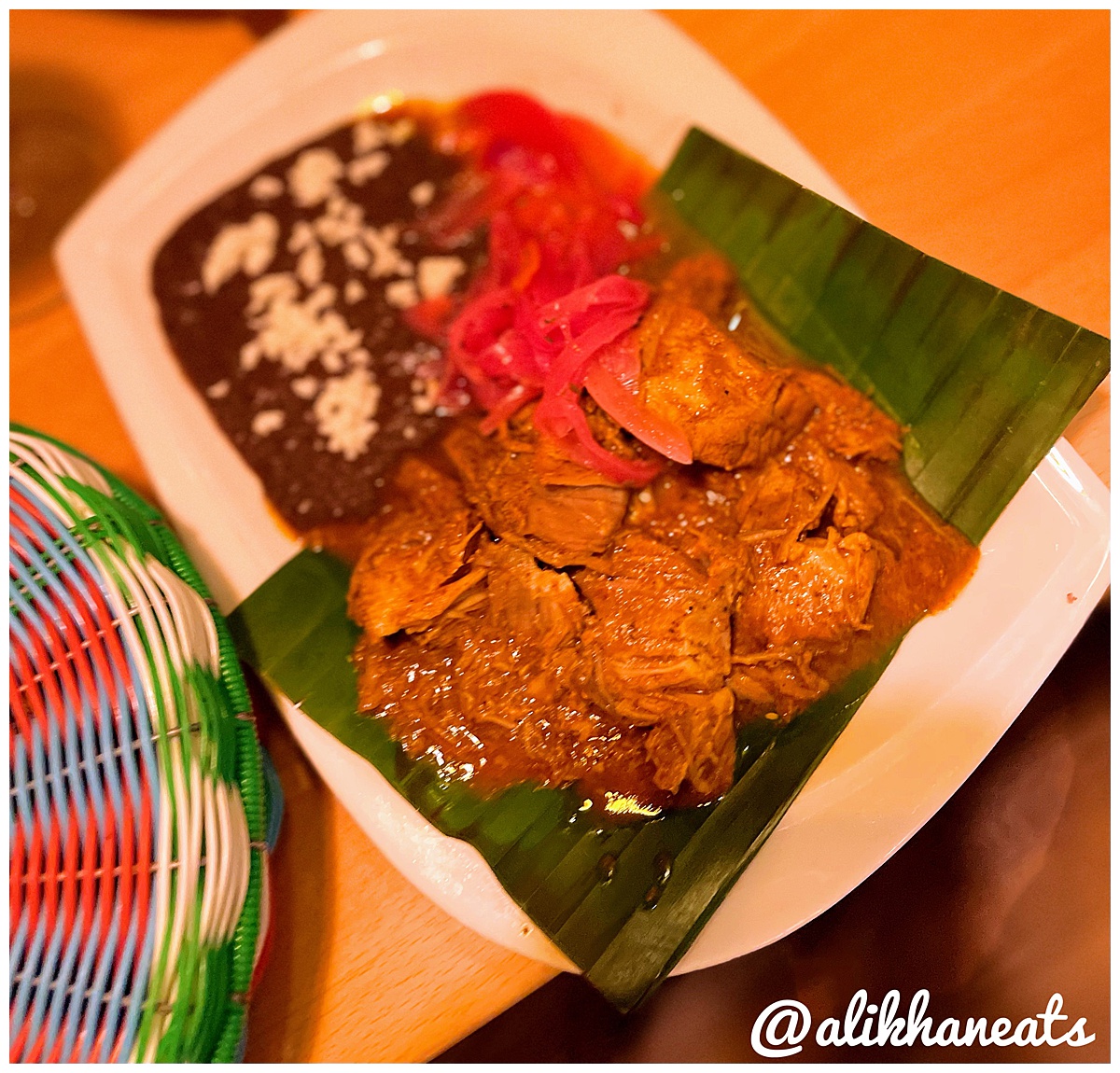 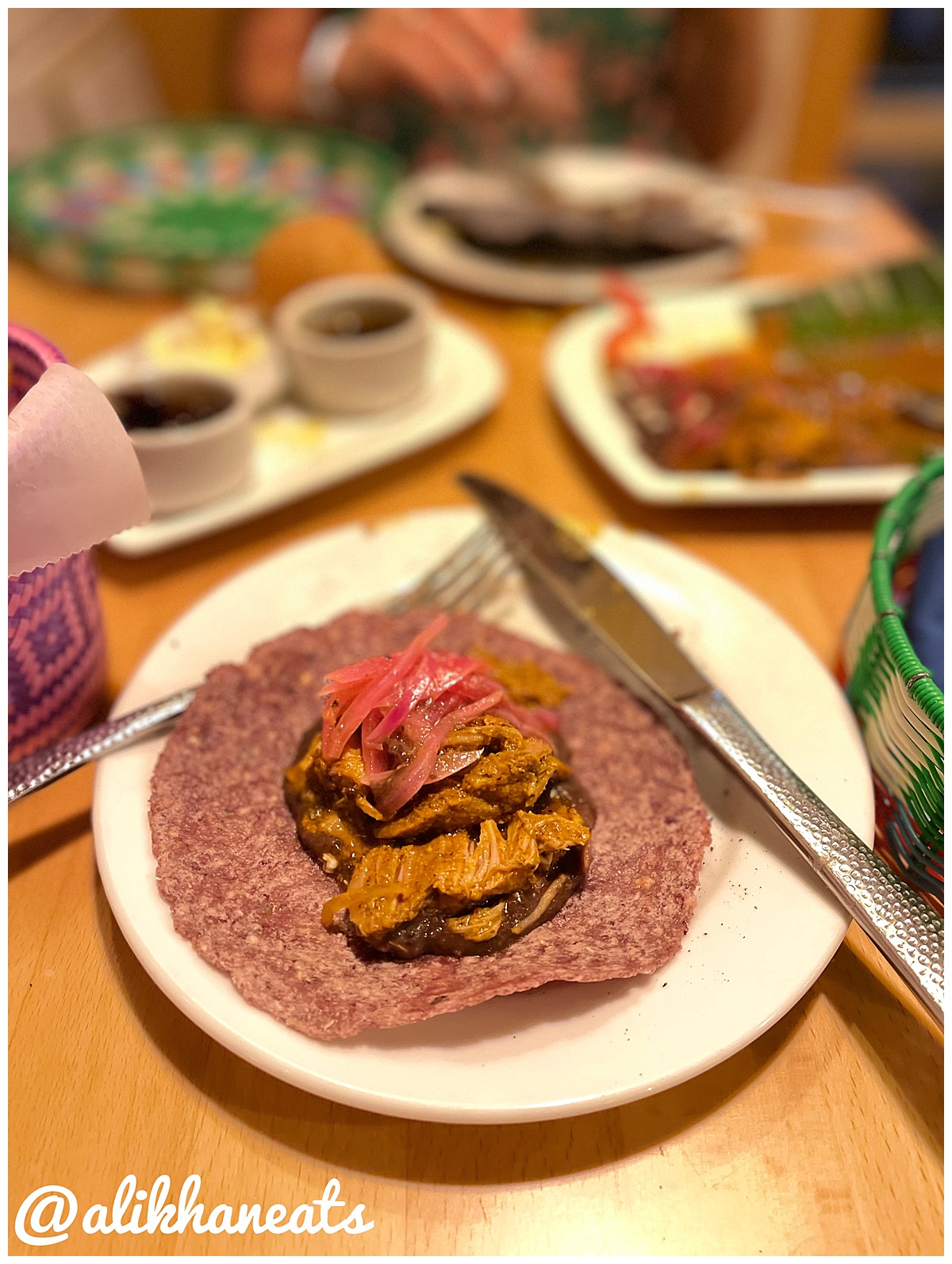 This rendition of the Yucatan classic wasn’t like the stuff I’ve had down south but somehow I could not put it down. In Quintana Roo, which neighbors the Yucatan, I visited a woman who made Cochinita Pibil on Sundays. Her verison, served to me in a plastic bag which I took home and promptly devoured on bolillo rolls, was cooked underground and remains the gold standard. So why was I constantly nibbling on this despite an approach to total fullness? Great meals find a way I guess. This dish is a crowd pleaser and I would encourage you to order it, especially when dining as a group. 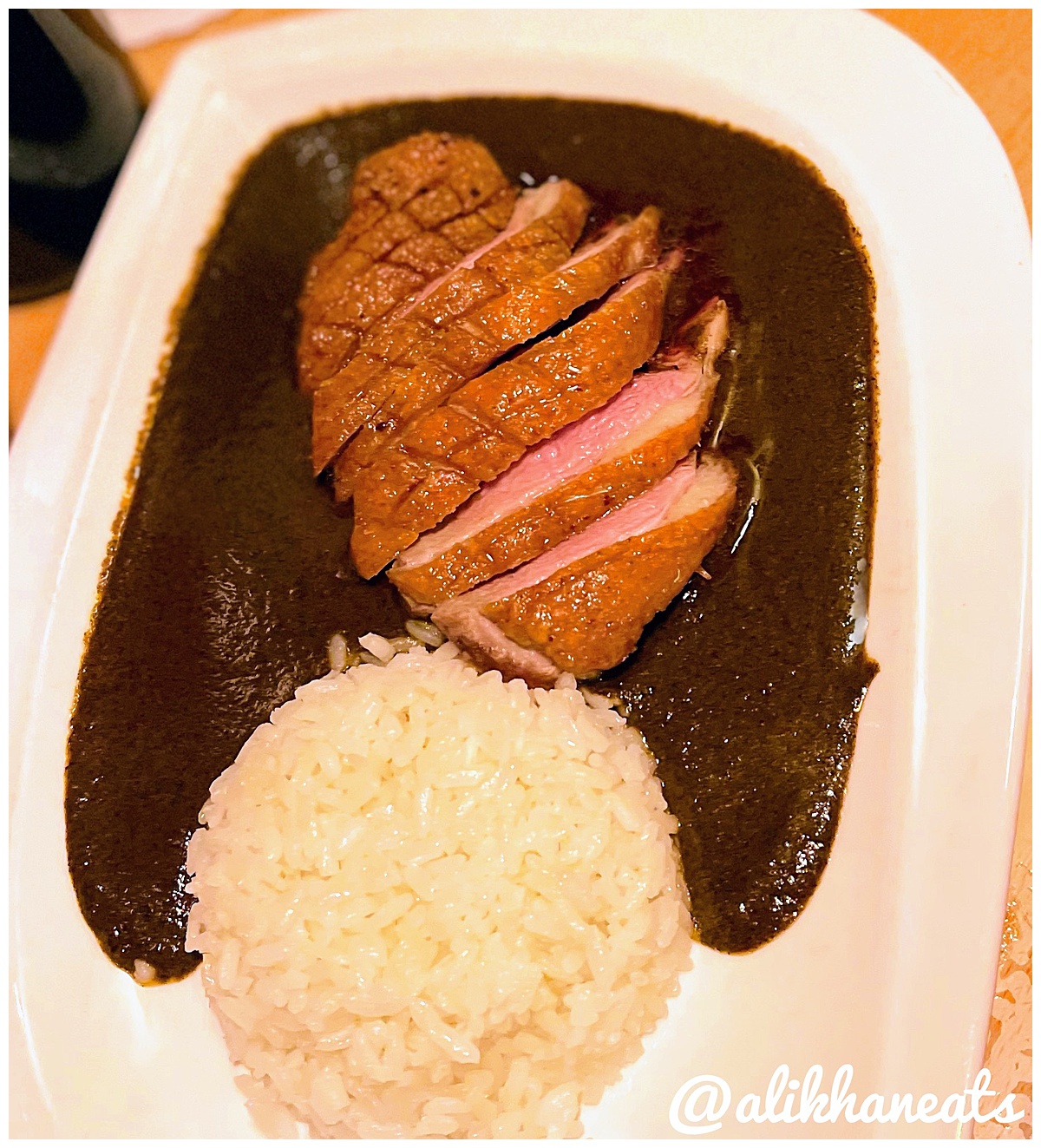 The Best Molé I have ever had

And of course it was with Molé Negro, what some consider the Holy Grail of Mexican cooking. While there are many moles of many different shades, Molé Negro is a blockbuster hit and for good reason. At El Naranjo, 30 different ingredients including almonds, pecans, peanuts and Oaxacan Chocolate combine forces for a most complex tasting experience.

Chef Iliana de la Vega also sources a rare chile called Chilhuacle that grows in Oaxaca for this molé as well. Don’t think of it as just spicy, this pepper also adds notes of cocoa, tobacco and dried fruit. Sounds like a wine description right? That should foreshadow how deeply complex this sauce tastes.

Now I have had molé several times over the years but no dish hit quite like the one I had at El Naranjo. What made this so special? The right protein that deserved to be hoisted up with such a magnificent sauce. I became a fan of duck breast cooked medium to medium rare(yes you can do that) in my youth going to French restaurants. I’m a steak lover and duck seared like this is right up the steak lover’s alley. Like an Au Poivre(French Peppercorn sauce), the right sauce makes a protein elegant beyond approach. I previously held this distinction for French dishes like steak au poivre. I now consider this molé as part of that cannon, maybe even the crown jewel.

I could just come to El Naranjo and order this duck with a glass of Mexican red wine and be happy as can be. And I know that because even after I ordered this dish, I ordered more. 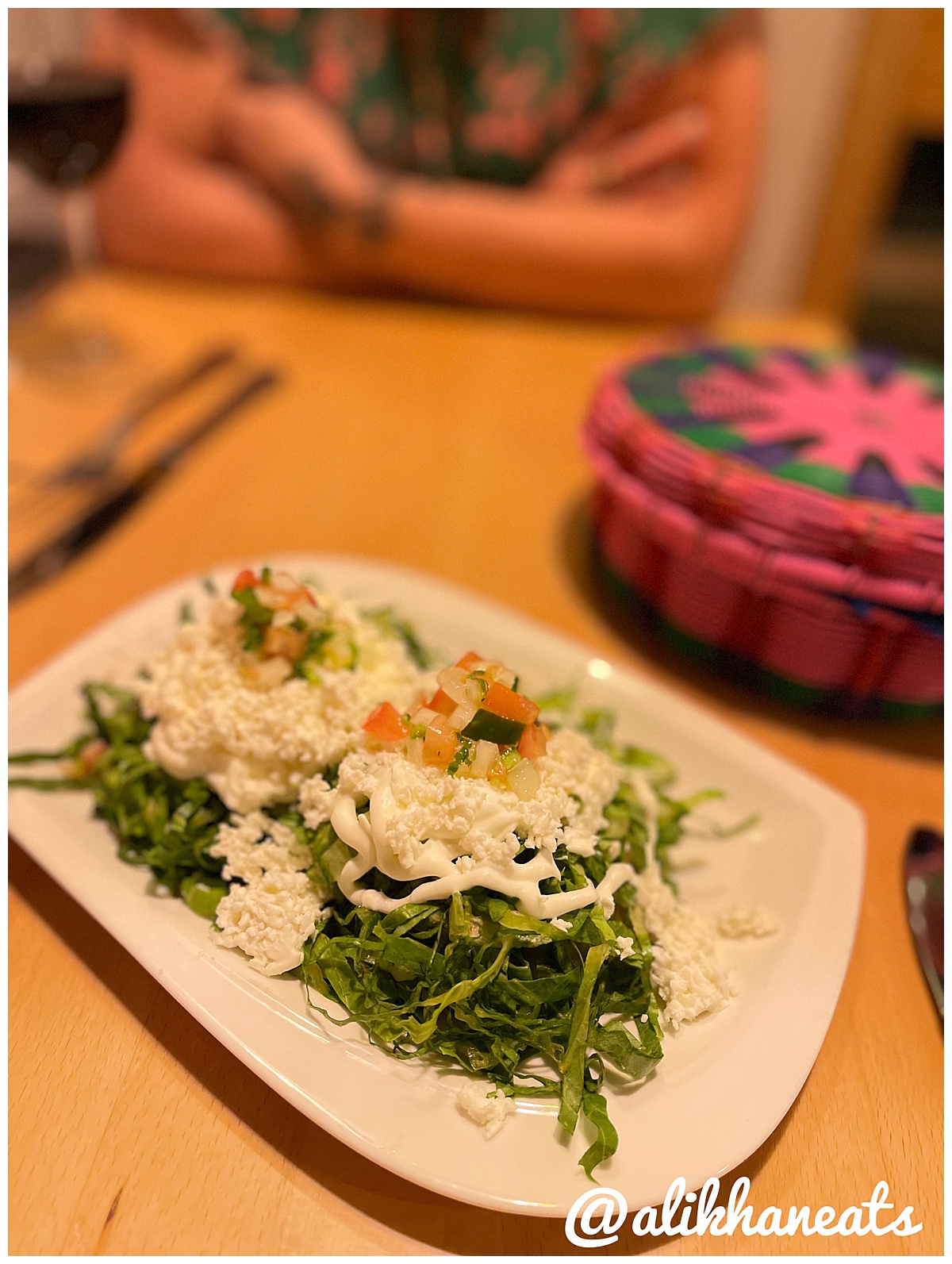 Underneath the shredded lettuce, crema and that dollop of pico de gallo lies two gorditas stuffed with chicharron. I was two full for the thick masa discs stuffed with fried pork skin so I’d advise ordering them early on and know that they will fill you up unless you are part of a big group.

And that’s probably the only issue I had a El Naranjo, there was too much to try and it’s hard to experience it all with a small party. So plan multiple visits or bring a group. Just know that the duck mole will that dish that will mark your experience until you get to Oaxaca itself. Like Oaxaca, El Naranjo is a special place.