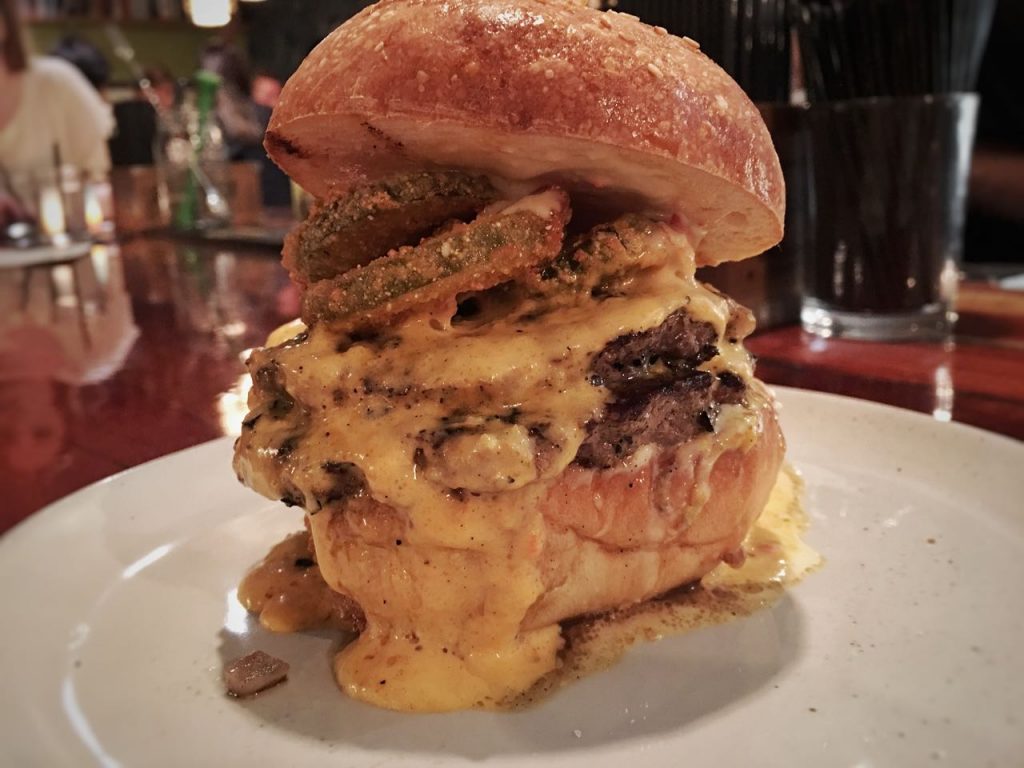 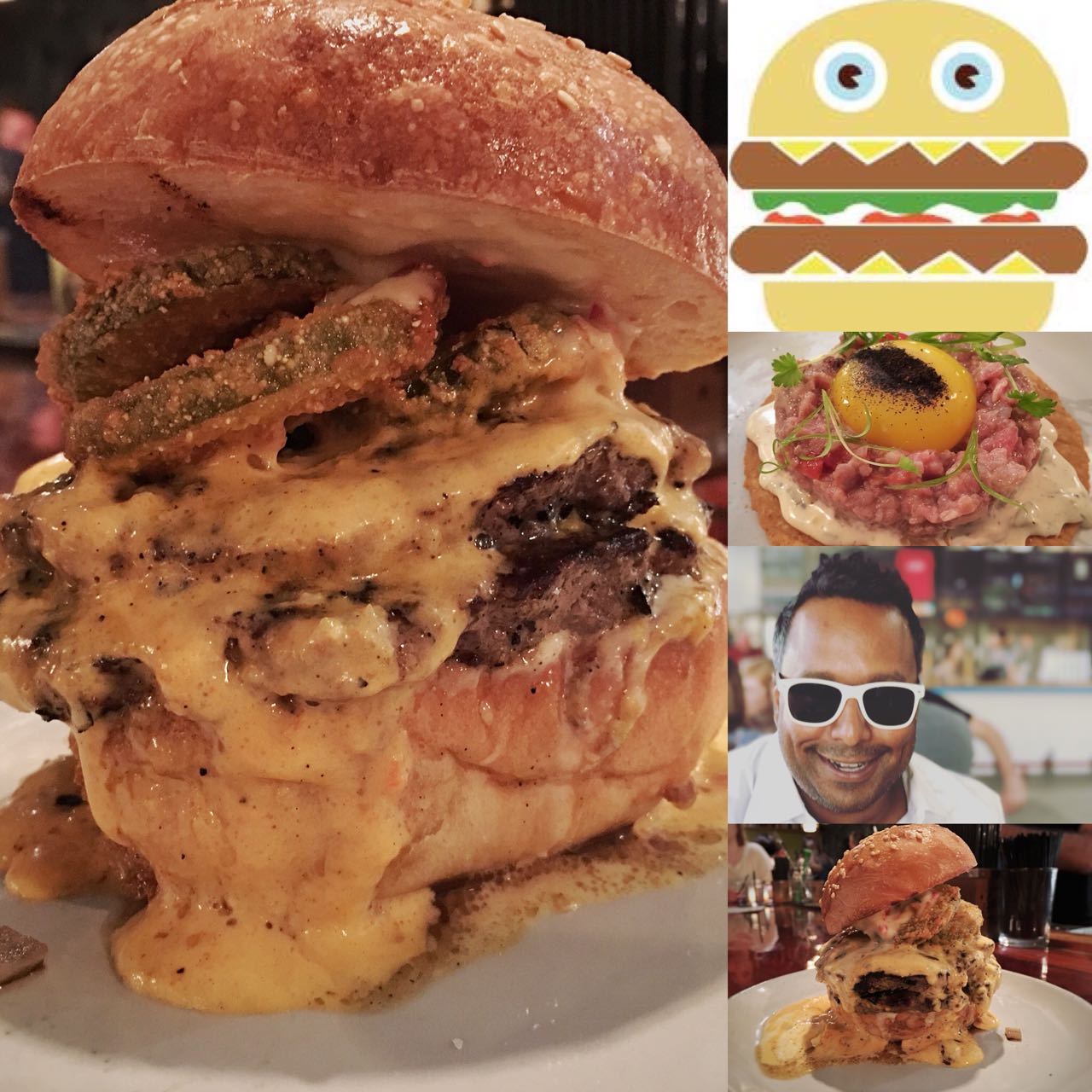 Austin is an unpretentious food town, and Hightower’s dimly lit interior and casual service set you up perfectly to be surprised by a dynamic menu wrangling in Mexican and Asian flavors in a small plates format sized for tipsy appetites. Every time I eat there I like it more and more. If you watch Cheap Eats carefully or read this blog(which I’m guessing you do since you are right now) you know that I flip for flavor forward foods. Mexican and Asian cooking certainly can serve that up, and being an American who is spoiled by food culture choices, it is nice to go to one place that has great whiskey and food I would crave a day after having plenty of whiskey. Before we get to the burger however I do feel we need to get into some other highlights of the menu that might have you picking Hightower for a date night as much as a burger binge. 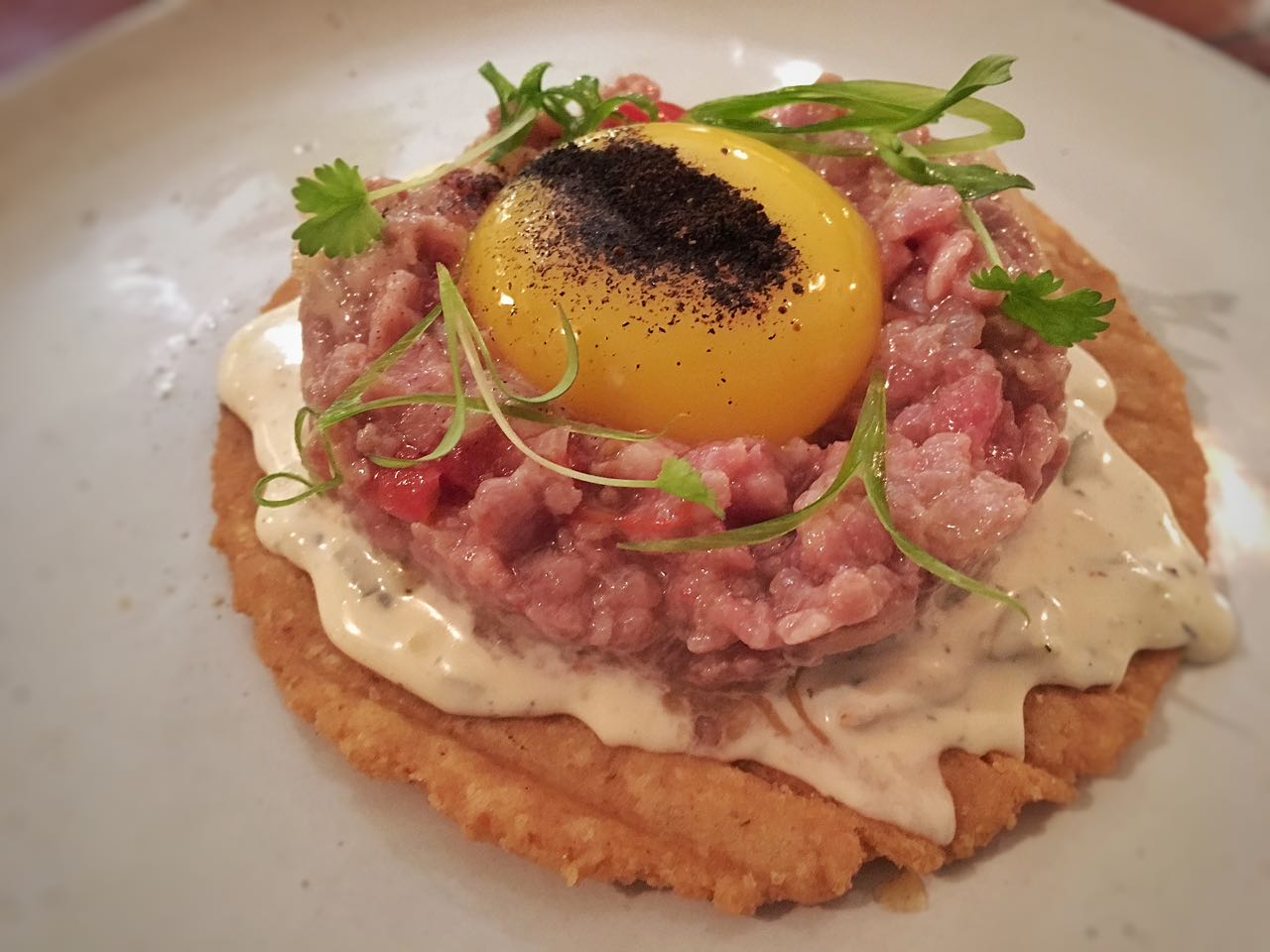 At $13.50, the steak tartare starter at Hightower is not exactly a prize pick for Bang for your Burger Buck, but steak tartare seldom is. This classic, elegant start to a meal is more to prepare the carnivore for a red meat feast fit for a king or at the very least someone with a job boasting 401K, health, vision and dental. Classic renditions mix the ubiquitous raw steak with the raw yolk of an egg, onions, capers and Worcestershire. At Hightower they remix the tartare with Mexican flavors and format; the base is a tostada and is layered with tomatillo crema, along with the raw steak, a tomato confit, an egg yolk and finished with chile lime powder. As pretentious as it might seem to type all that out, believe me this tartare was as lips smackingly satisfying as diving into a tostada dish you would find at an Interior Mexican restaurant. 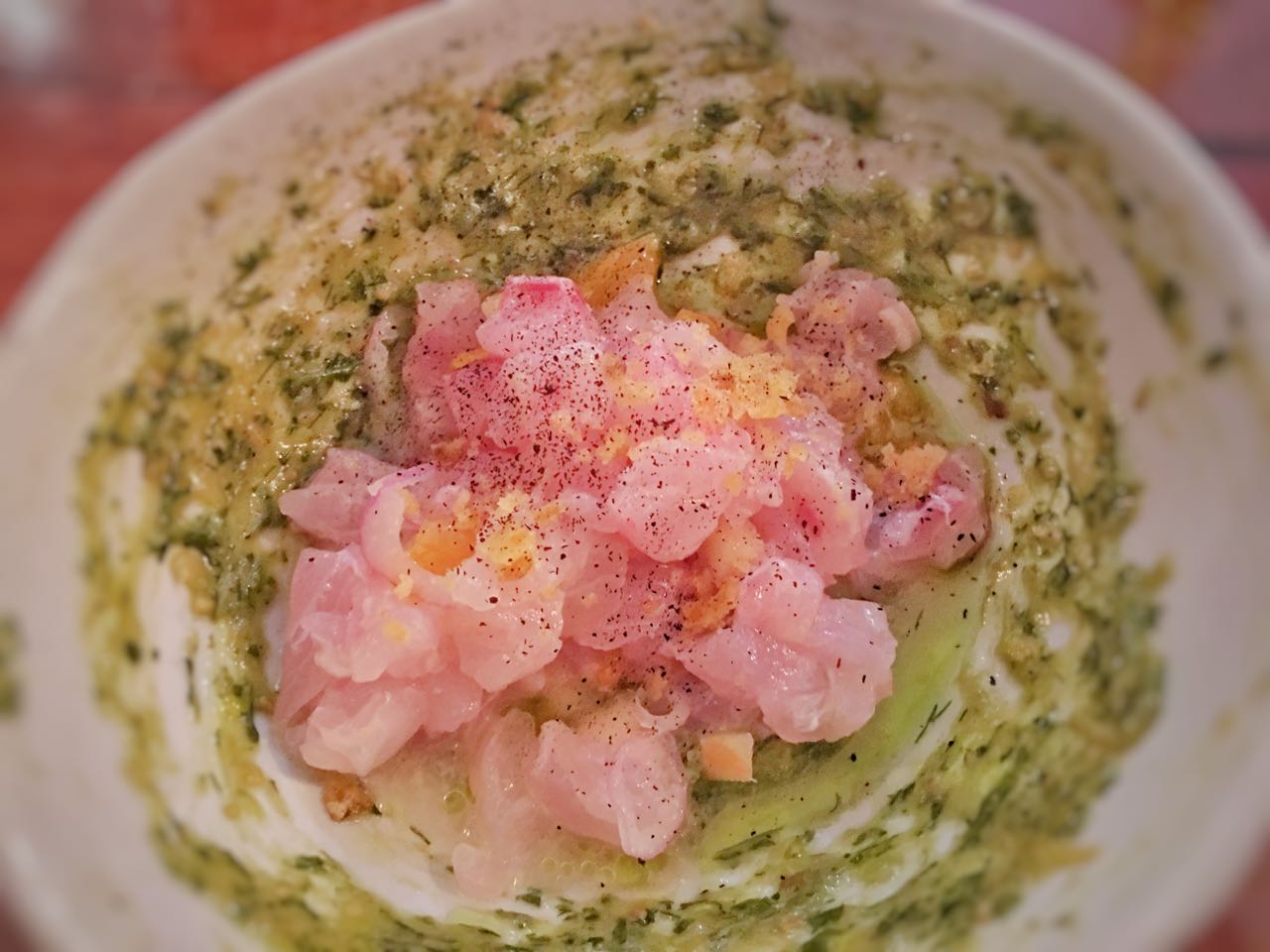 I found the ceviche equally compelling as the Mexican inspired steak tartare in that it took full advantage of Austin being a short drive to the bounty of Gulf seafood. I had not encountered black drum until I moved to Austin, and like all fresh local fish, really captures your attention when it is more or less coming straight out of your backyard. Everyone loves tuna, which is why you see tuna on every menu, but true ceviche heads know that milder white fishes can be equally satisfying in this south of the border “sashimi-esque” format(taking some liberties here but hopefully you get the idea). Fennel mojo and orange give the marinade that acidic and citrus touch and if I recall correctly(there were some whiskeys that night) the guacamole smeared on the edges of the bowl added some fat and flavor. I do wish there were more ceviches to be found in Austin given the hellish summers, so at $11.50 I ain’t mad, not at all. 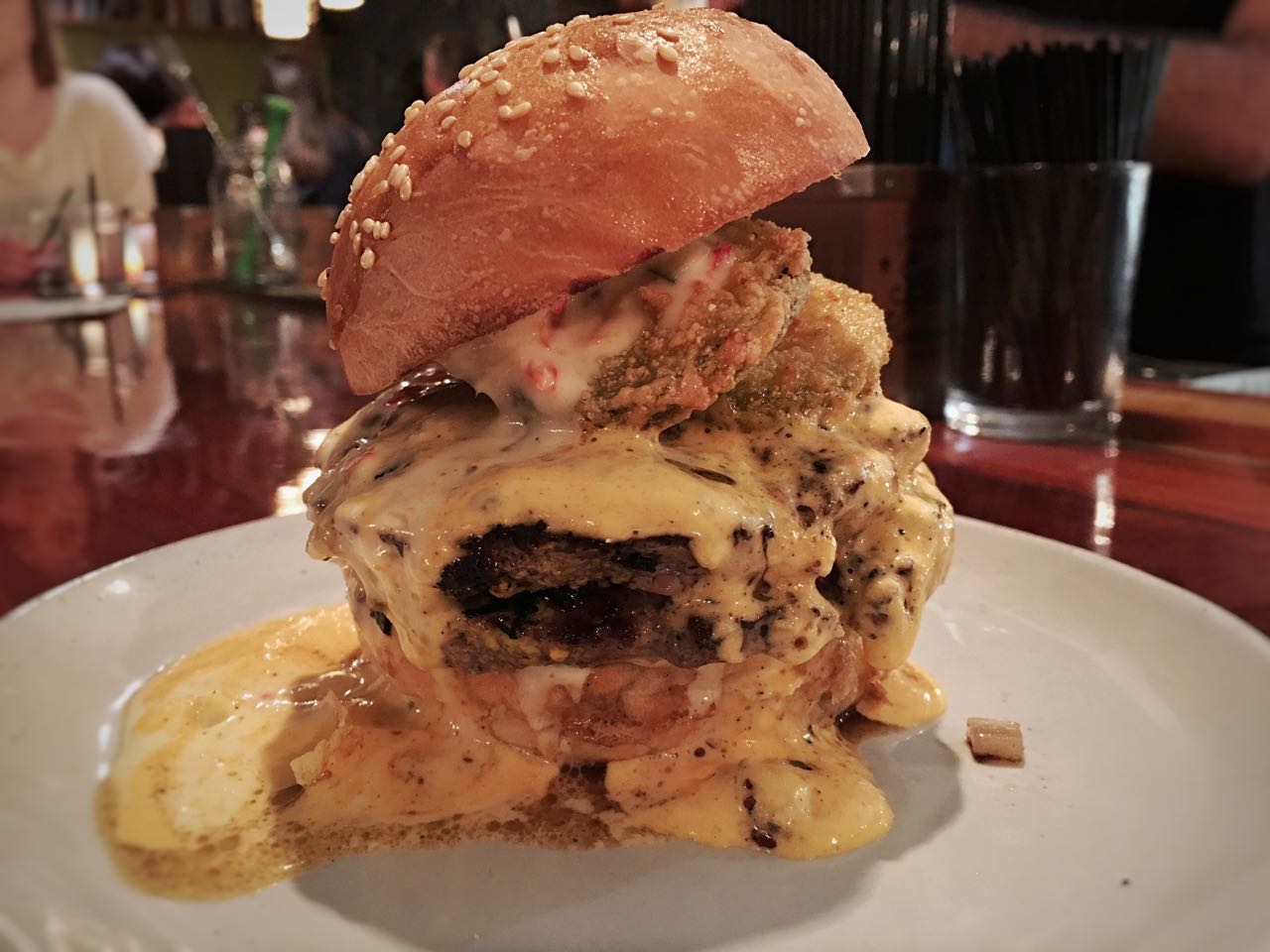 And now the main event. Coming in at two patties, plus cheese sauce, fried pickles, fried egg aioli on a sesame bun, the unassumingly named “Burger” at Hightower is one magnificent messy feast. The patties were cooked through, which being fairly thick defies my “edict of medium rare” but lets not kid ourselves; there is NO WAY this burger is going to come off dry. This is one of the most gooiest cheeseburgers I have encountered and yet despite my better burger intuition, the cheese sauce and fried egg aioli don’t cancel each other out on the creamy factor, rather they make for one rich zesty mess. I feel like some heat was snuck in there for balance, but one doesn’t ask many questions when eating the burger at Hightower, just more napkins. 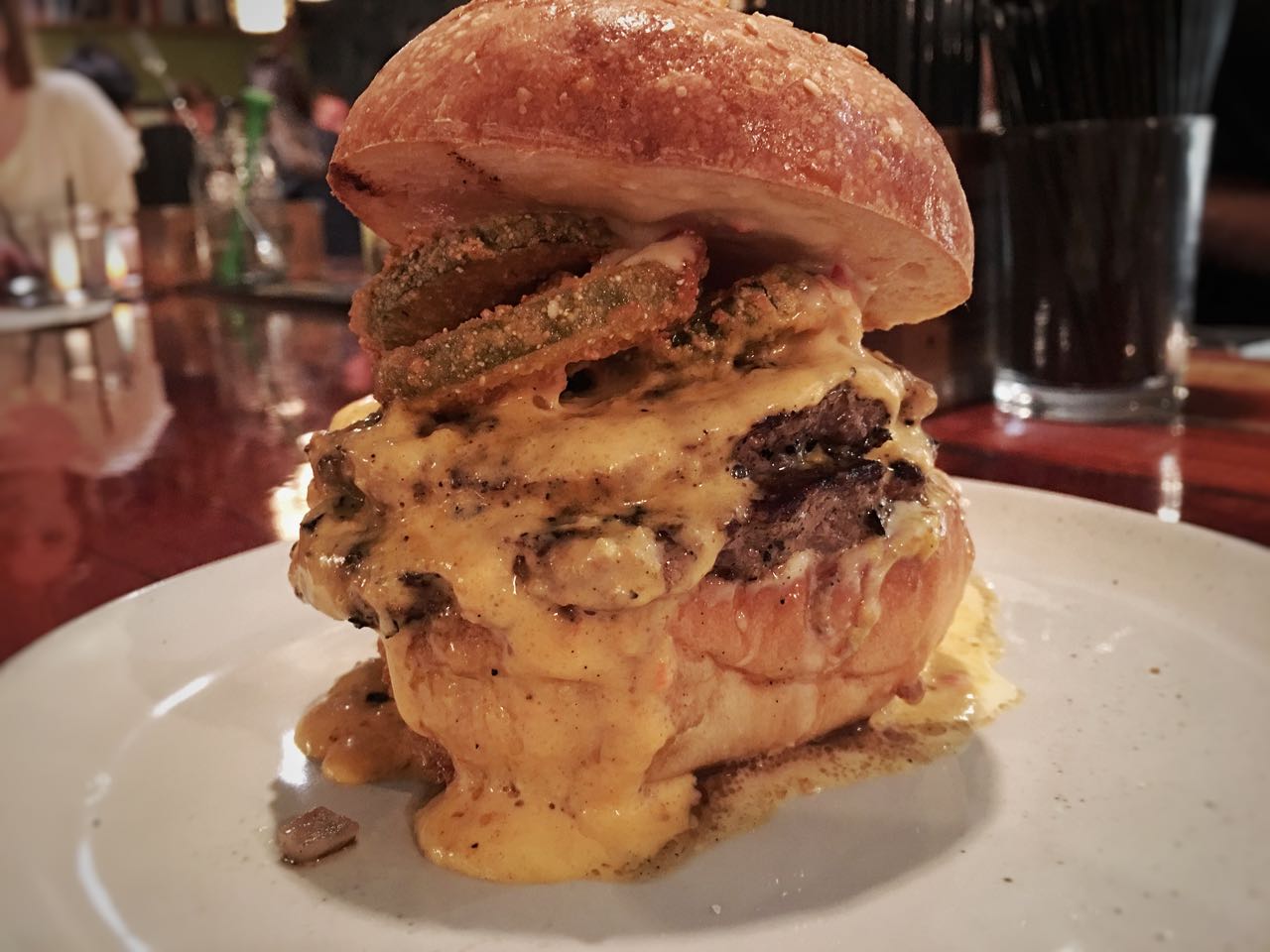 Yeah, they really were. Certainly much needed on the acidic front, but keep in mind these pickles were also fried adding some contrast in texture. This burger works on the Big Mac principle where cheese, pickle and sauce smother burger in a comforting embrace, invoking that familiar flavor profile that worked on double cheeseburgers for decades. This is of course tuned up for the Austin dining crowd who are no strangers to there own local burger traditions like Hopdoddy and P. Terry’s but also will pony up at chef driven farm to table places like Barley Swine and Sway. I have called out Hopdoddy’s as a prime example of Austin bang for your burger buck, but if you seek a burger that literally drips with decadence, coming in at $9, this heavyweight is a true champ.