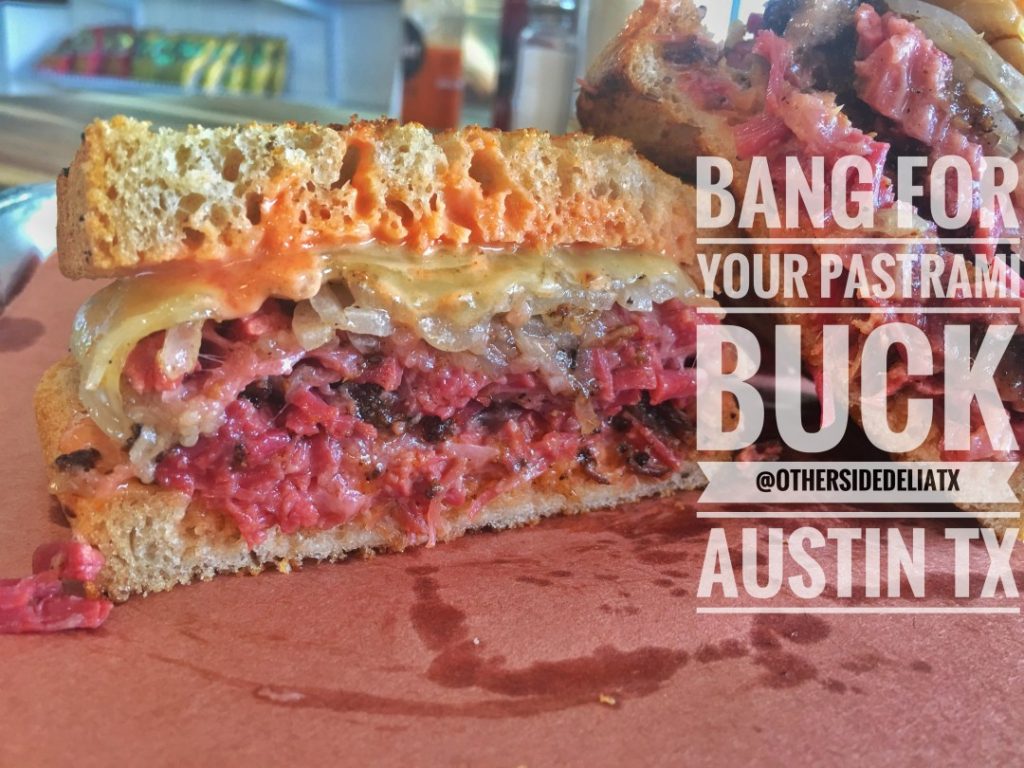 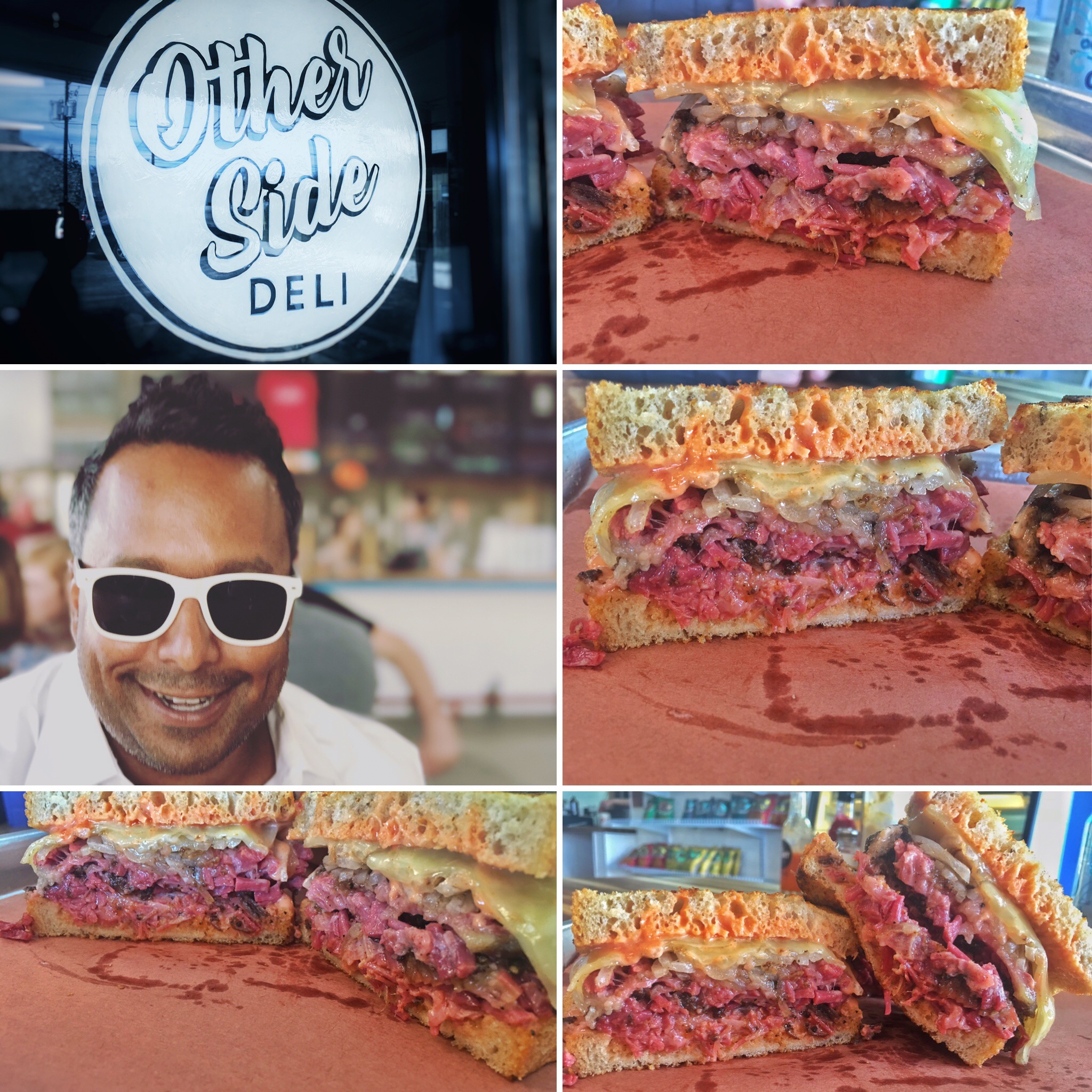 The Vitals:
the spot: Otherside Deli 1104 W. 34th St Austin TX  78705
the eats: The Roddy
the bucks: $11
the full nelson: The first pastrami sandwich that has made me miss LA a little less

In the weeks leading up to my imminent departure from Los Angeles in the summer of 2015, I made sure to eat at as many of my favorite haunts as I could. Knowing that I couldn’t get to them all, I made a special emphasis on foods that I knew would be in short supply in the Lone Star State. Falafels, Baja style fish tacos and delicatessen fare topped the list. Sure, one can find a respectable falafel in a city like Austin, but just not in the same frequency as one can find them in the city of Angels, or with the same variety; Israeli, Lebanese and Armenian options abound when it comes to scoring a Middle Eastern hush puppy.

As far as deli fare as concerned, I knew I would be in dire straits. So I made sure to hit up Langer’s delicatessen: home to the best pastrami sandwich in the universe. Yes, it’s better than Katz in NYC. Langer’s magnificently crafted pastrami sandwich, whose rye bread is just as perfect as the hand carved slices of pepper smoked beef, was worth a flight back to LA in my opinion. And I held to that opinion for years now, right up till about last week. 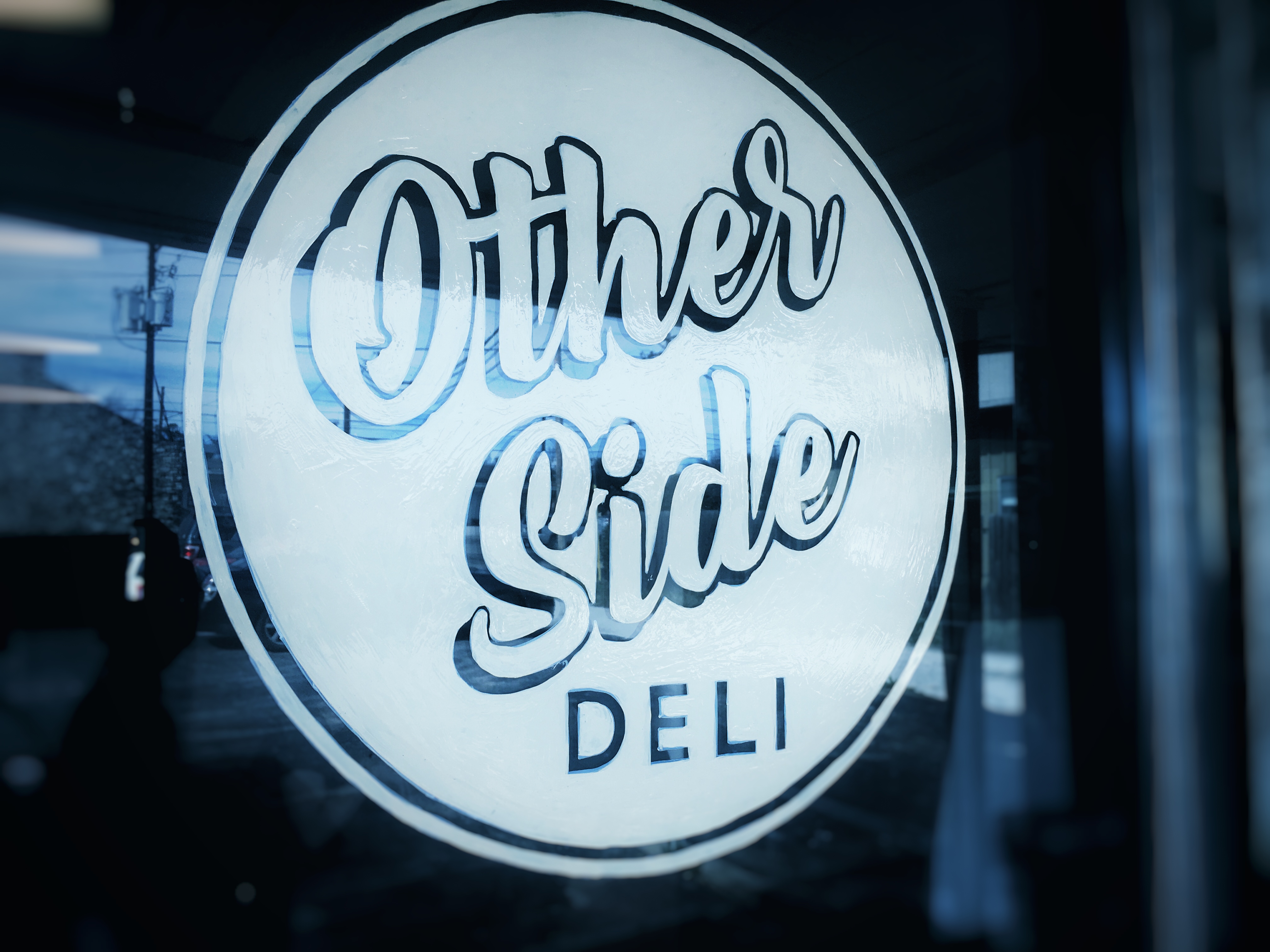 Like so many excellent Austin eateries, Otherside deli started out as a food truck. Cut to fall of last year and Otherside Deli has grown into a full fledged brick and mortar. Occupying a former sandwich spot in a dated strip mall, you don’t go to Otherside Deli for ambiance. You go for a legit pastrami sandwich that can hold up to some of the best in the country. 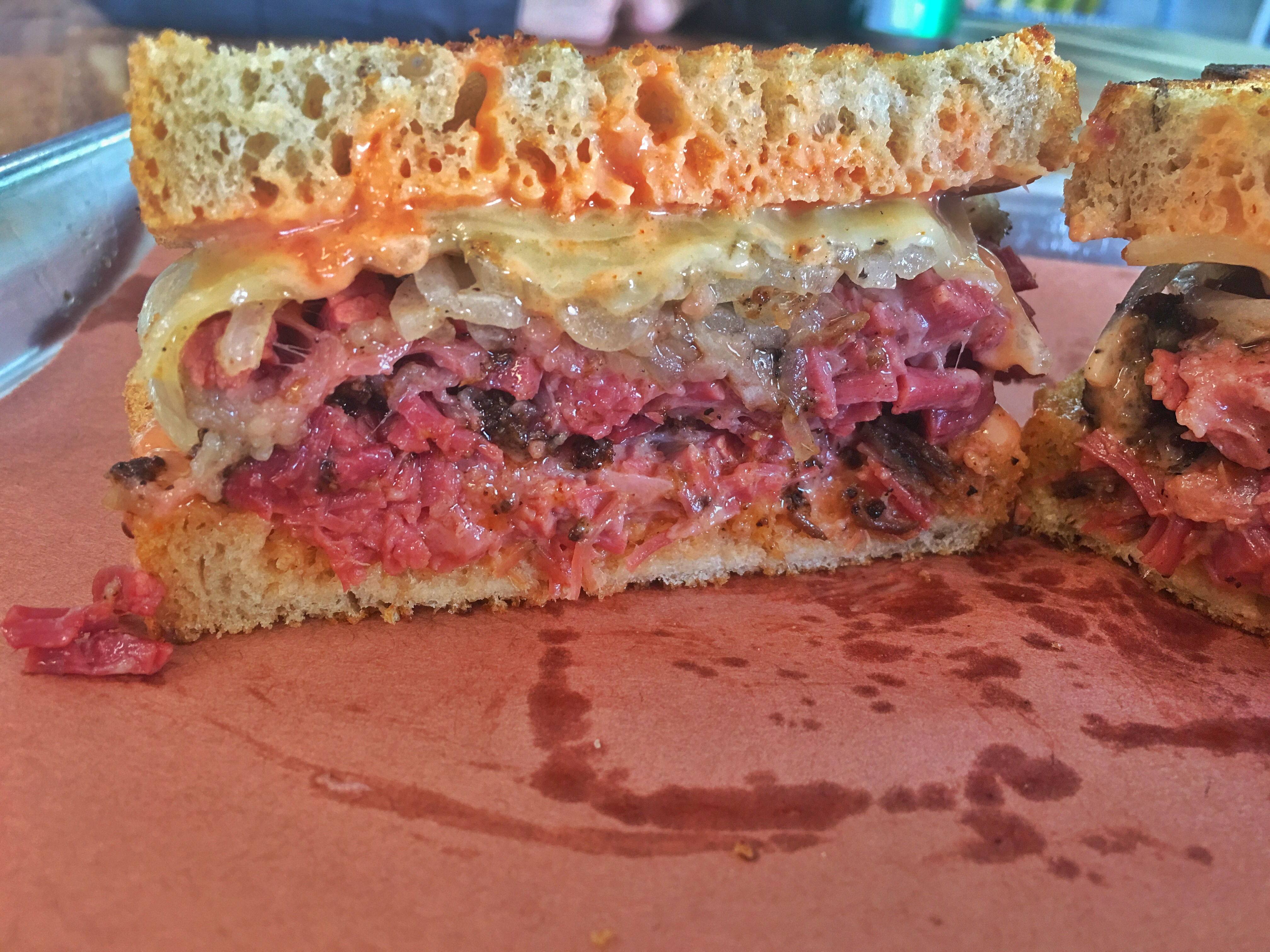 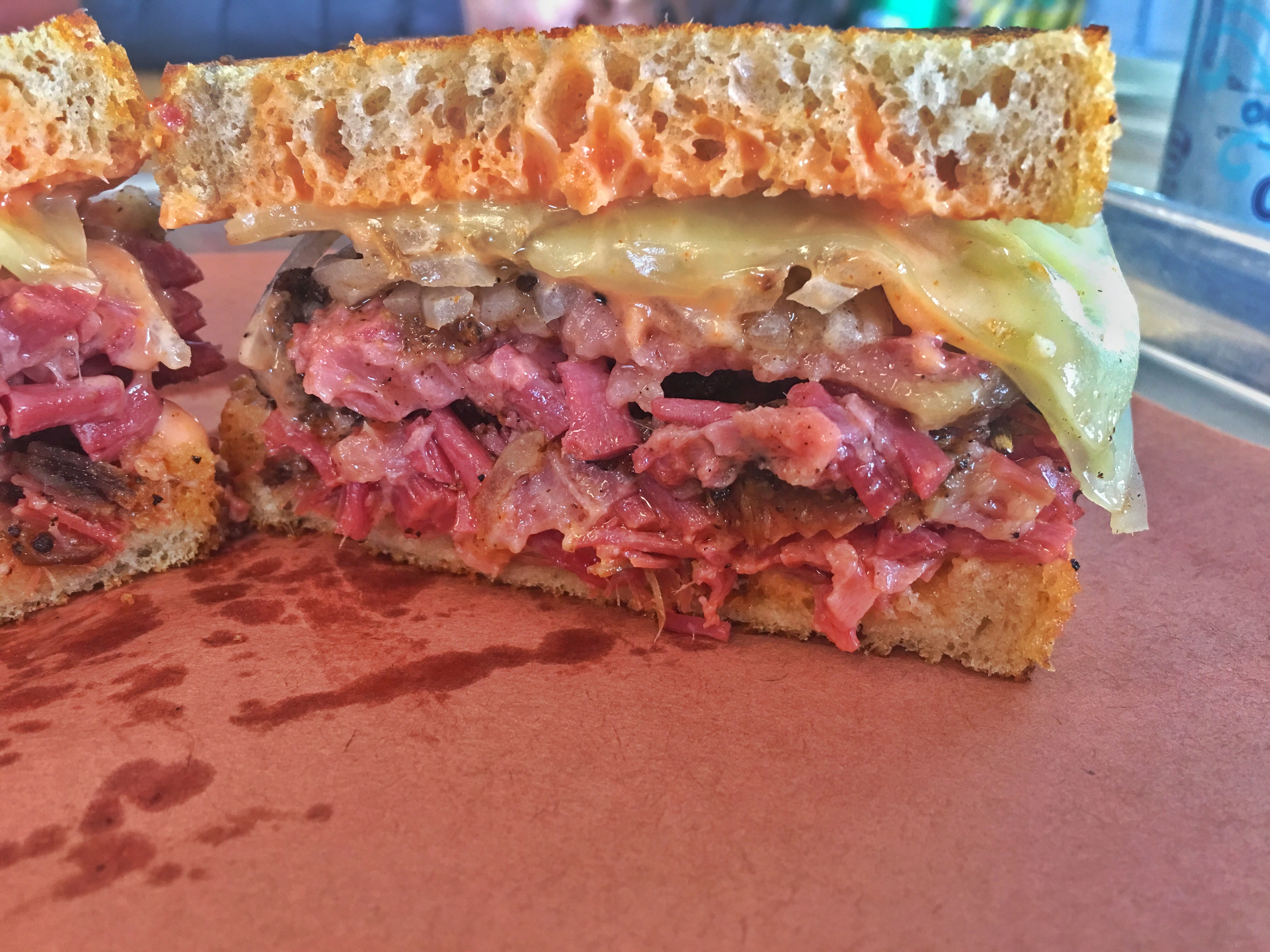 Unlike Langer’s delicatessen in Los Angeles, Otherside Deli prepares the pastrami from start to finish. They brine beef brisket for days before they smoke and steam the hunks of beef till it’s melt in your mouth tender. Like Langer’s, they source their bread from a great bakery, for any restaurant in Austin that means  Sour Duck Market, which is a well documented favorite of mine.

I went with “The Roddy” which is Otherside Deli’s version of a patty melt. The Roddy usually comes with American cheese but I opted for the Swiss. Russian dressing, a classic pastrami condiment, is also in play and since this is a patty melt, there are grilled onions too. Grilled onions on pastrami might strike you as unusual, it did to me, but a couple bites in and I totally forgot the onions were there. And that’s a good thing. This sandwich is all about a melt in your mouth, complexly spiced pastrami that favors the aromatic coriander versus the bite of black pepper. Oh and some ooey gooey love on top never hurts either. 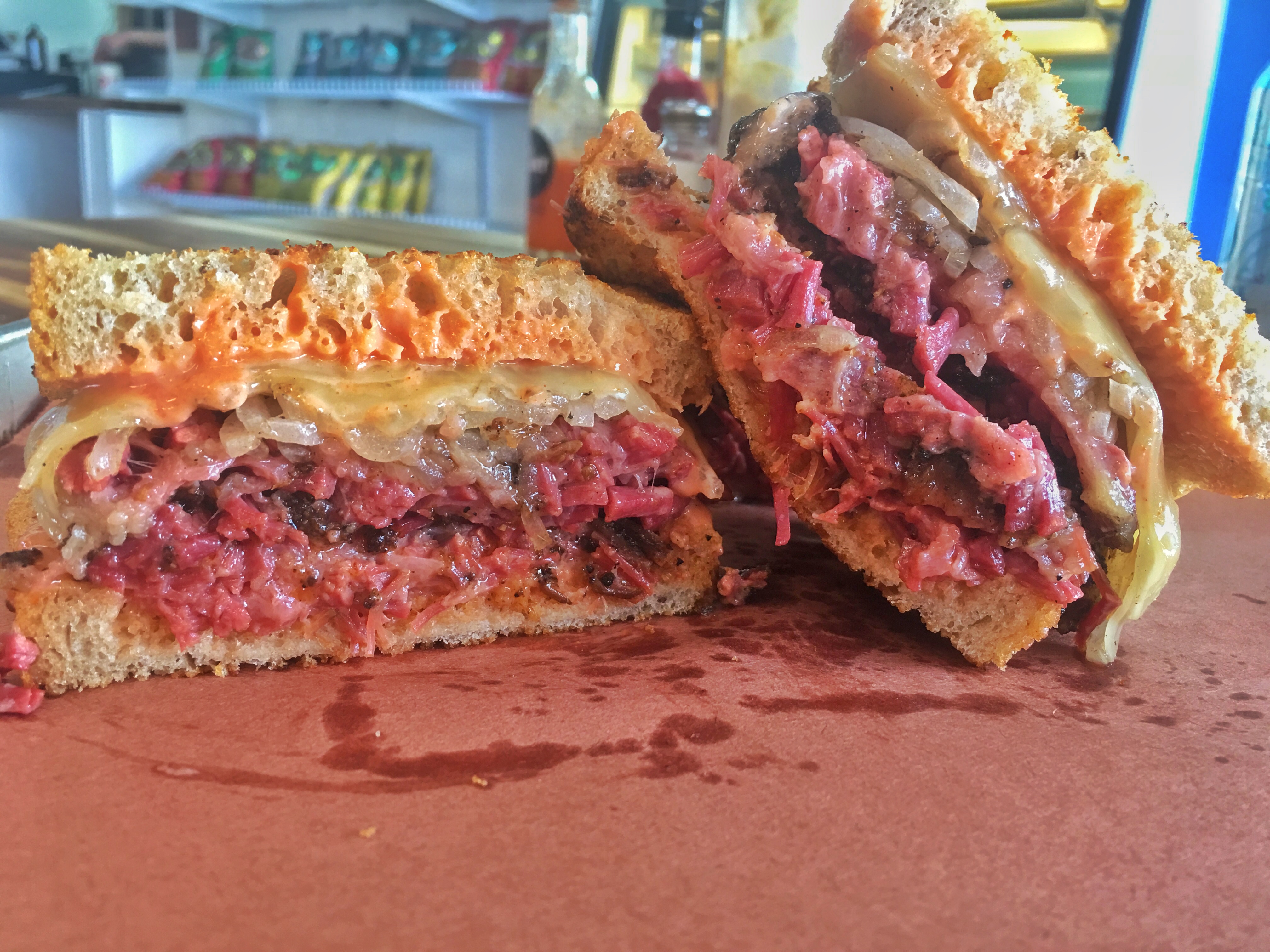 You certainly get your money’s worth at Otherside Deli. The Roddy runs you $11 and you could almost share it, if it wasn’t so good. The Pro Tip would be to get multiple sandwiches, roll deep with the squad, and just start tearing through the menu. Out of principle I will need to try the Reuben. But upon my next visit I will be getting the namesake, The Otherside, which much like Langer’s famous #19, serves up pastrami on rye with coleslaw and Russian dressing. There are other sandwiches too, like Italian cold cut combos, but in a town where tempting pastrami peddlers can be counted on one hand, make the safe bet and go all in on pastrami, or maybe corned beef, every time at Otherside Deli.

Now you might wonder if I’m ready to declare the Otherside Deli pastrami sandwich as good or even better as the legendary Langer’s delicatessen of Los Angeles. Well that’s just too tough a call to make without a side by side comparison. But as far as Langer’s being worth the flight back to LA . . . that’s just no longer the case. Austin may not ever be known as a delicatessen town but when it comes to food trucks that dream big . . . you just might be surprised what you can find.

One response to “Bang for your Pastrami Buck: Otherside Deli ~ Austin TX”