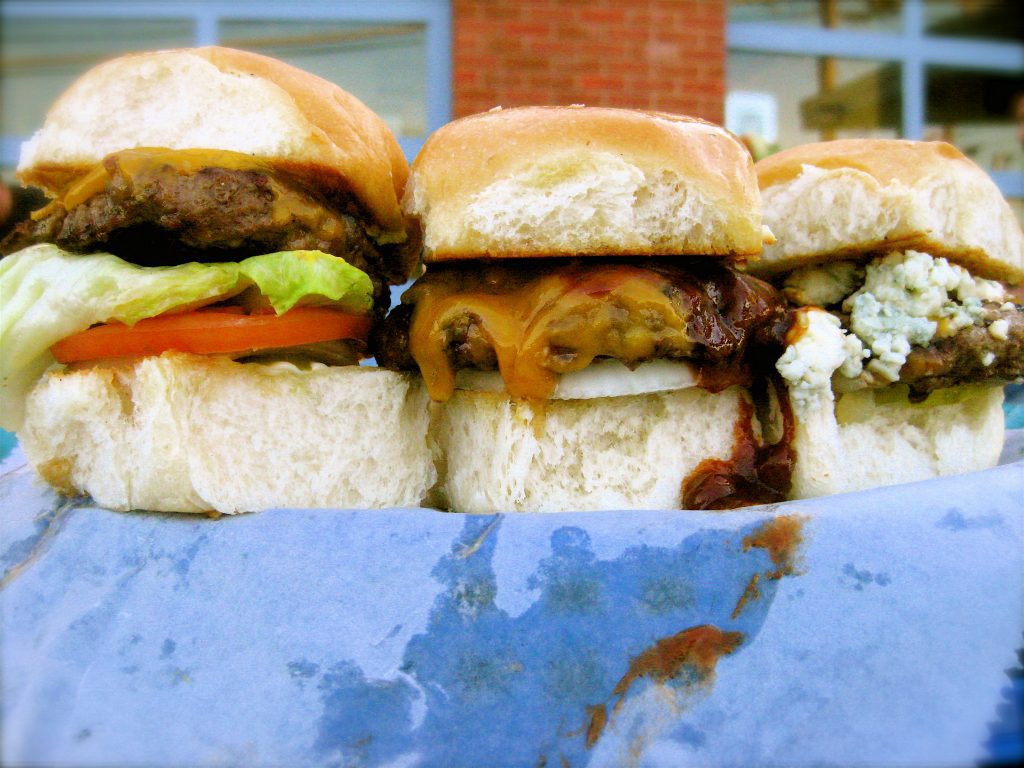 The Vitals:
the burger: Mini Burger Sampler Basket: three topping concept driven sliders from a selection of eleven different renditions plus a 50/50 mix of regular and sweet potato fries
the bucks: $9.49
the coordinates: Austin, TX

Sliders and the restaurant “Playland”. Two crucial components to Phil’s Icehouse. Two elements that are frankly way undervalued in the burger world. After recently completing a 1500 mile road trip from Los Angeles to Austin with a three year old, I came to appreciate the power of the Playland. An appreciation that came with a cost. One can only imagine the legendary Chicken Fried Steak or BBQ Brisket I passed up because the aforementioned diner or shack failed to offer a slide and climbing wall. A regret that seems actually more bearable than the thought of enjoying the most blissful bite of fork tender beef brisket only to turn into chewing gum once your 3 foot tall dining companion commences a meltdown. So for those 1500 miles I ended up eating more than my share of Chicken McNuggets, Square hamburgers and fake milkshakes. But hey, that’s part of the sacrifice of being a Parent right? Wrong. Leave it to some smart entrepreneur who recognized this ridiculous disparity of fine food and fun times for the ankle biters, and set up a place like Phil’s Icehouse. And speaking of fine food, how about fine tuning about 11 compelling burger combinations then offering them in miniature form, aka sliders? Sound like a good idea? Well, it tastes like one too. 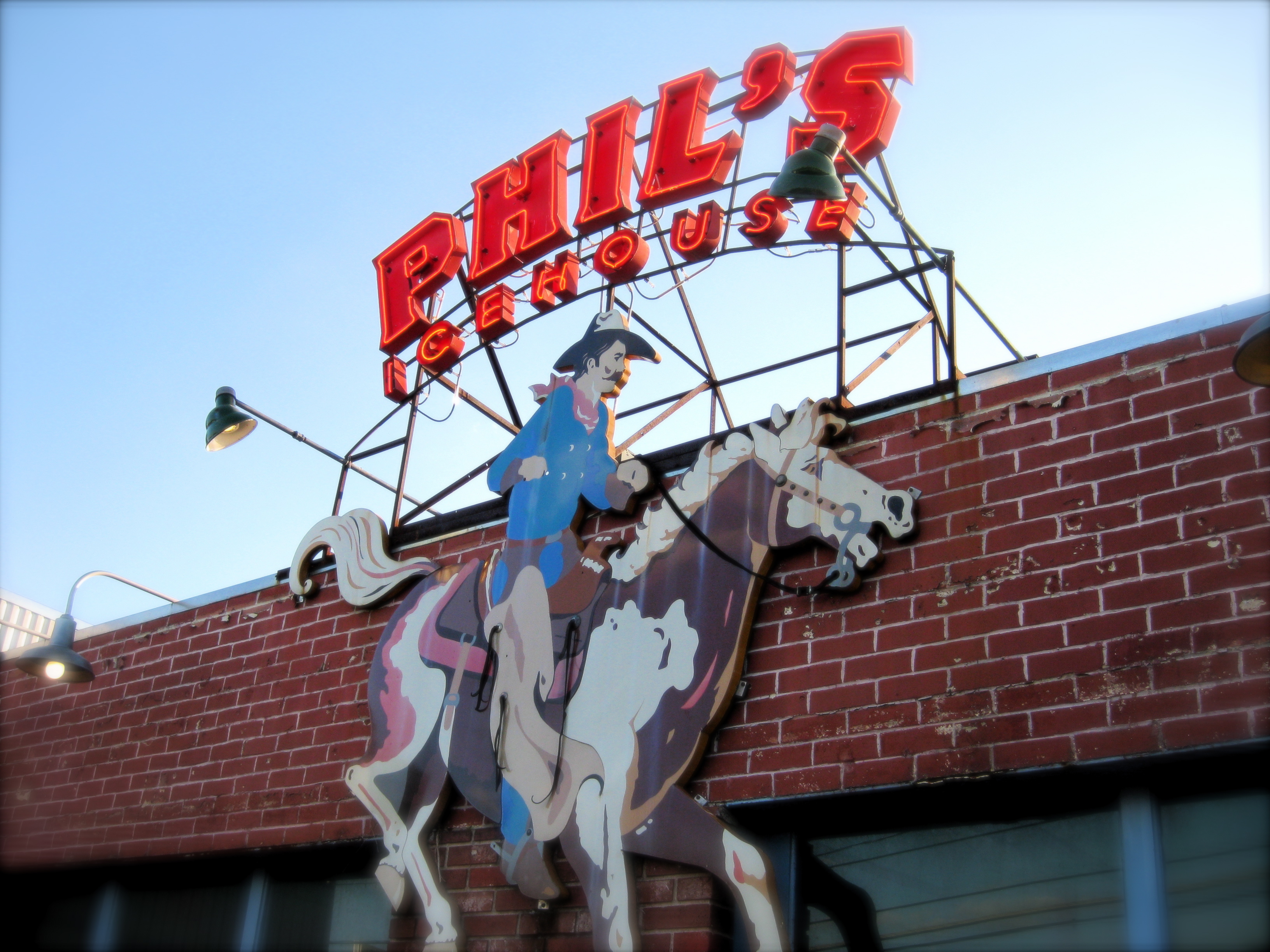 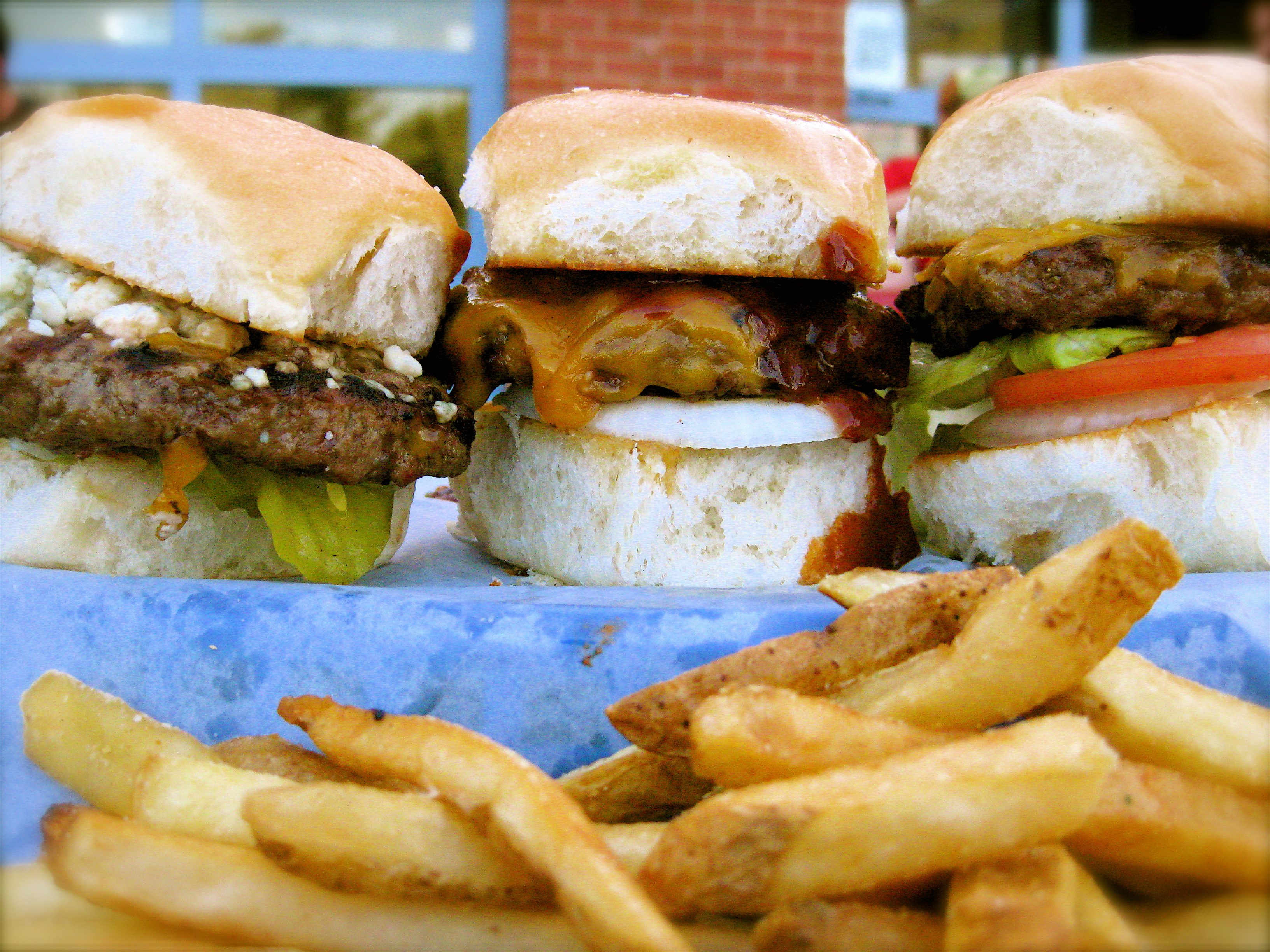 The standard shebang of a burger joint’s genesis in the last 15 years usually begins with a burger obsessed person or persons one day having an epiphany of what the greatest burger should be. Shortly thereafter, the said person or persons will rob a bank or let the bank rob them by way of a loan, then go about their way of serving their delicious dream to John Q. Public, Mrs. Public and their 2.5 children. In the case of Phil’s Icehouse one would assume a guy named Phil would be the big cheese behind the griddle. But in fact this is sadly not the case. Phil Clay, whom the Icehouse is named after, passed away some 12 years ago. From looking at his tribute on the website, one can conclude he was far more than a business partner at Amy’s, the ice cream shop situated right next to Phil’s Icehouse. He was a treasured friend, one of those special people that meant so much to so many. After his passing, Amy and Steve Simmons, owners of the ice cream shop, felt compelled to do two things: honor their beloved friend and start yet another Austin burger joint.

The ATX is no stranger to good burgers. Chefs around town churn out high concept burgers as often as top tier burger chains either move in or expand beyond the Austin City Limits. I still scratch my head at the fact that I live in a town that has In N Out, Shake Shack and Steak N Shake plus local burger empires like P. Terry’s and Hop Doddy. Stepping into burger competition of this scale takes someone that is determined and maybe a little crazy.  Considering the fact that the menu settled on 11 different burgers, I would say both were at play when initial burger brainstorming began on Phil’s Icehouse. And a brainstorm it was. It seems a venerable think tank of burger experts were assembled in disseminating the components of a “perfect burger” in what could be called simply a bacchanal of burger consumption. After months of testing and the inevitable weight gain, two conclusions were made: there is no one perfect burger and sliders are the way to taste a multitude of these compelling burger combinations. 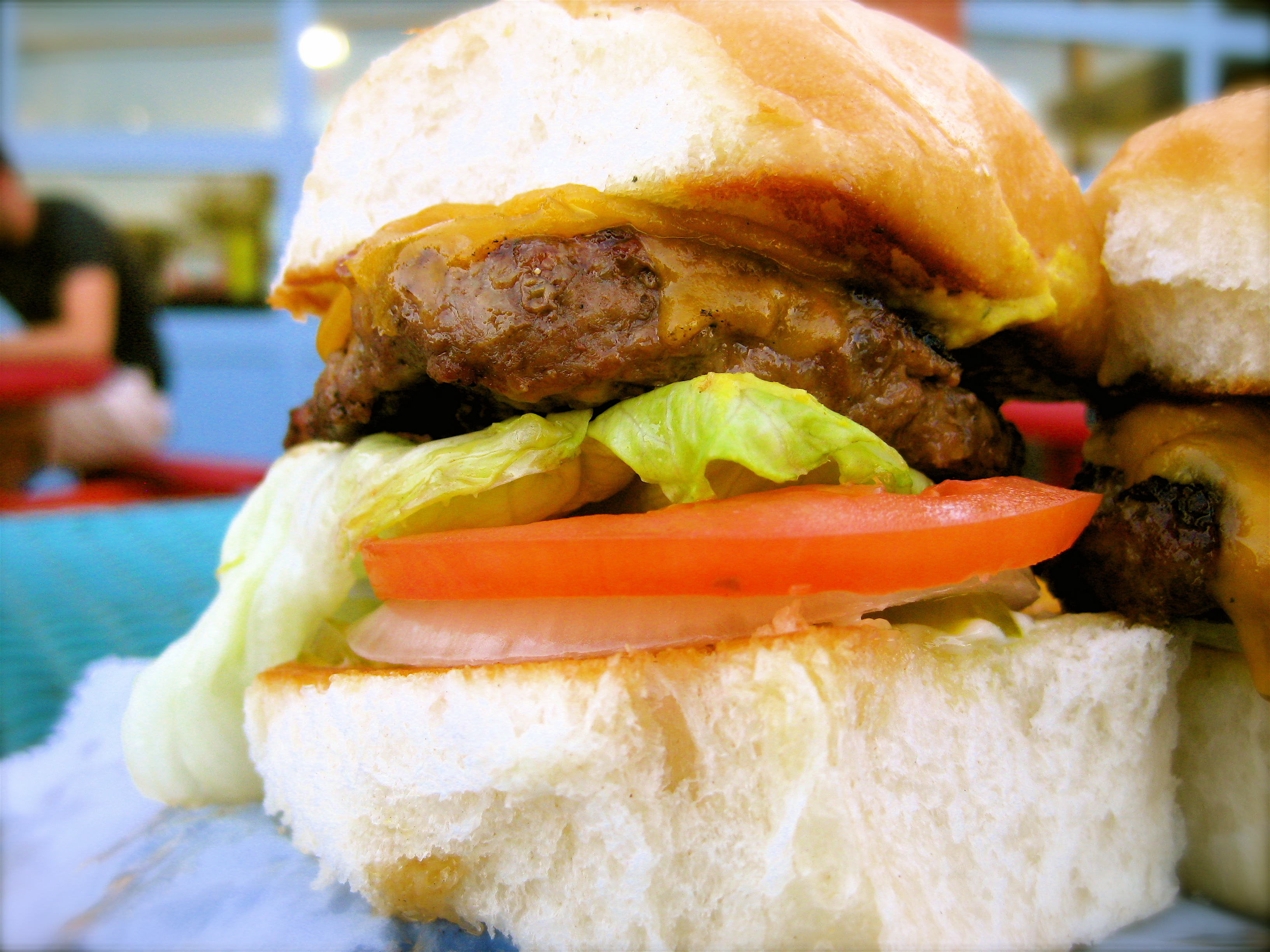 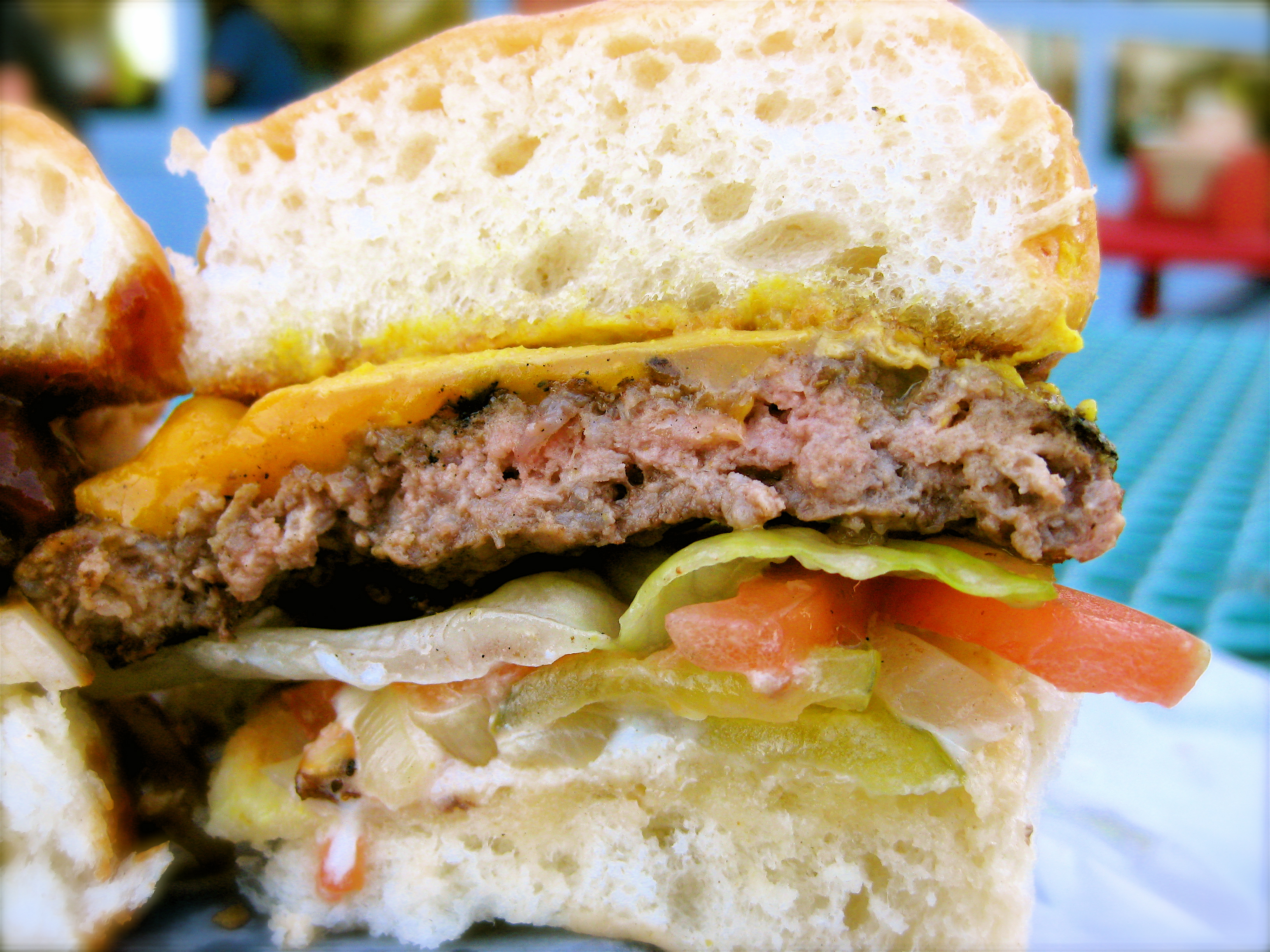 Meet the Allandale. Named after one of the adjacent neighborhoods surrounding Phil’s Icehouse(a popular trend on this menu), this seemingly standard issue of toppings: lettuce, tomato, onion, pickle, mayonnaise and mustard, raised my brow to what I have identified to be a “classic Texas” style burger. The Allandale evokes Whataburger’s signature “all the way” ordering option with a slight but smart addition of mayonnaise. The trait of note is the wet stuff. As opposed to the classic Southern California burger where the wet stuff of choice is thousand island, that combo of creamy mayonnaise, sharp mustard and briny sharp pickles creates just a little more overall heat to the familiar all American Cheeseburger. And it works. The Annandale may seem the most pedestrian burger on the menu at Phil’s but it’s also the comforting and the easiest to order again and again. 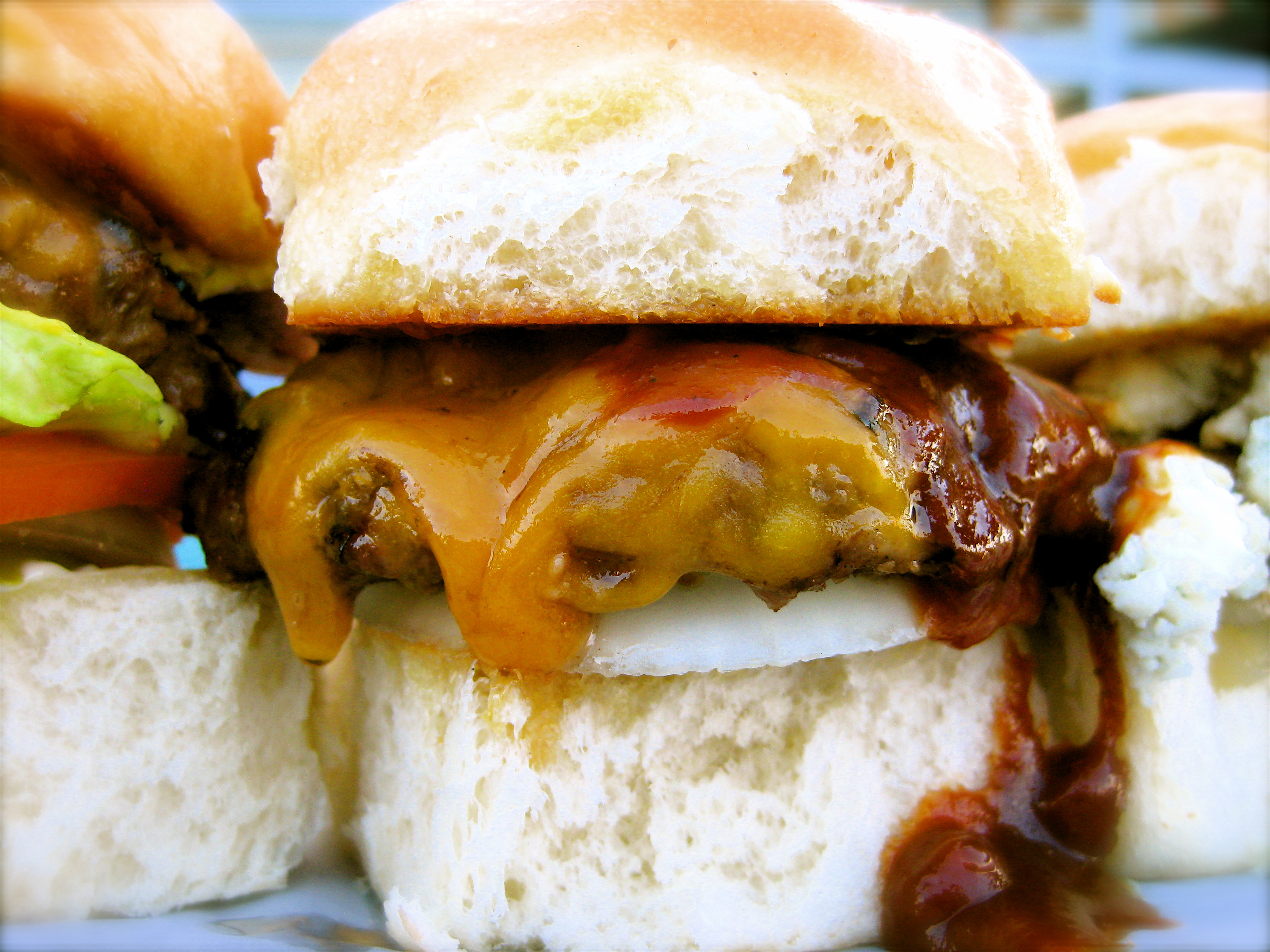 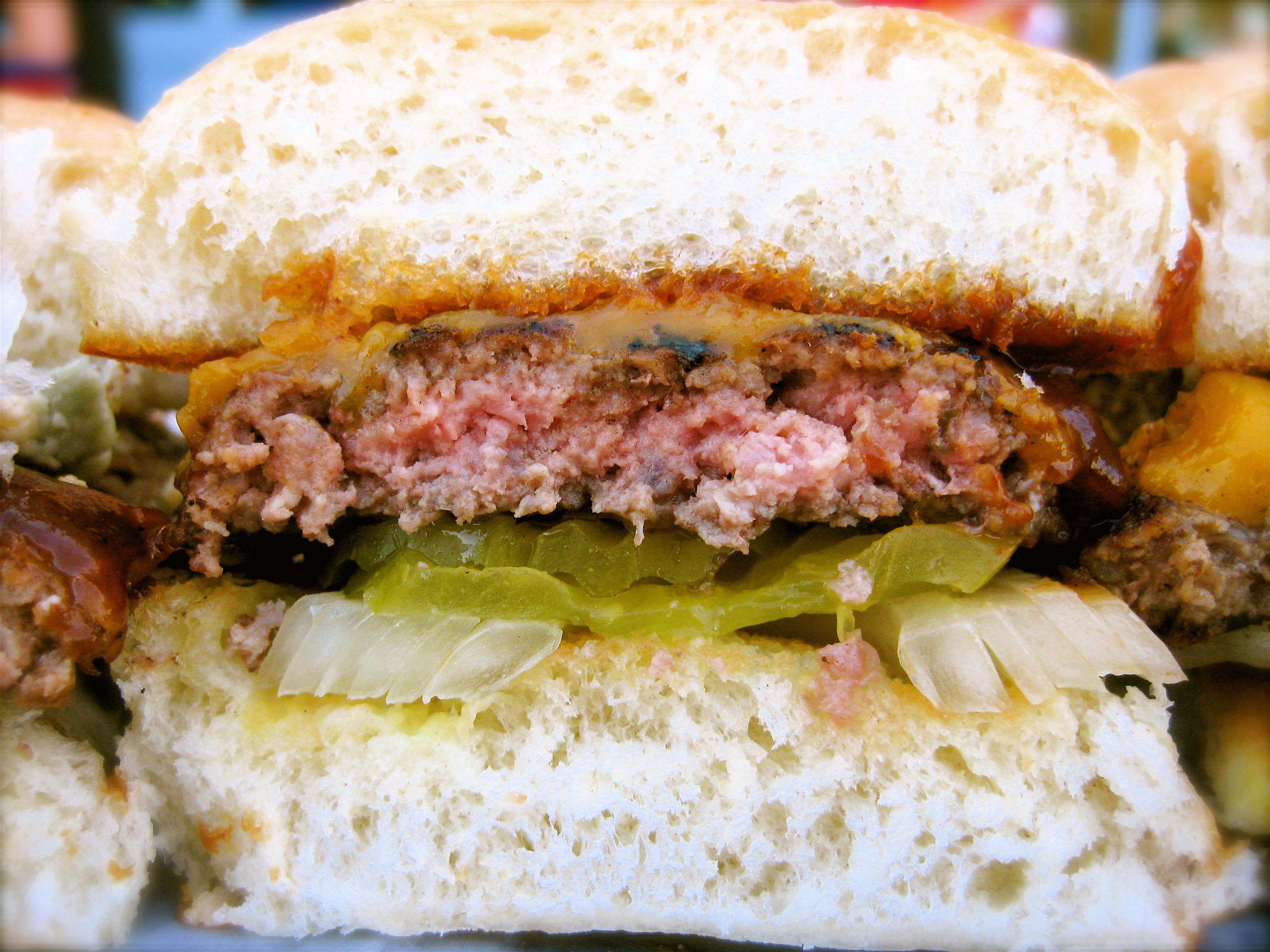 My standard burger ordering protocol is to skip over anything with BBQ in it as most of the time the taste of the burger is lost in a sea of some lowly bottled BBQ sauce. One would suppose in Texas, this would not be the case, with so many BBQ joints vying for a discriminant customer base. Such is the case of the Rosedale, a mesquite grilled cheddar cheeseburger that is dressed McRib style with an equally mesquite barbecue sauce, pickle and onion. With my consumption of barbecue and admittedly BBQ burgers at a relative minimum when compared to the typical Austinite, this was the most memorable of the three sliders and easily the one I would recommend to the out of towner. When it comes to the decision of ordering anything BBQ related in the confines of Central Texas, the old saying “when in Rome” applies rather aptly. 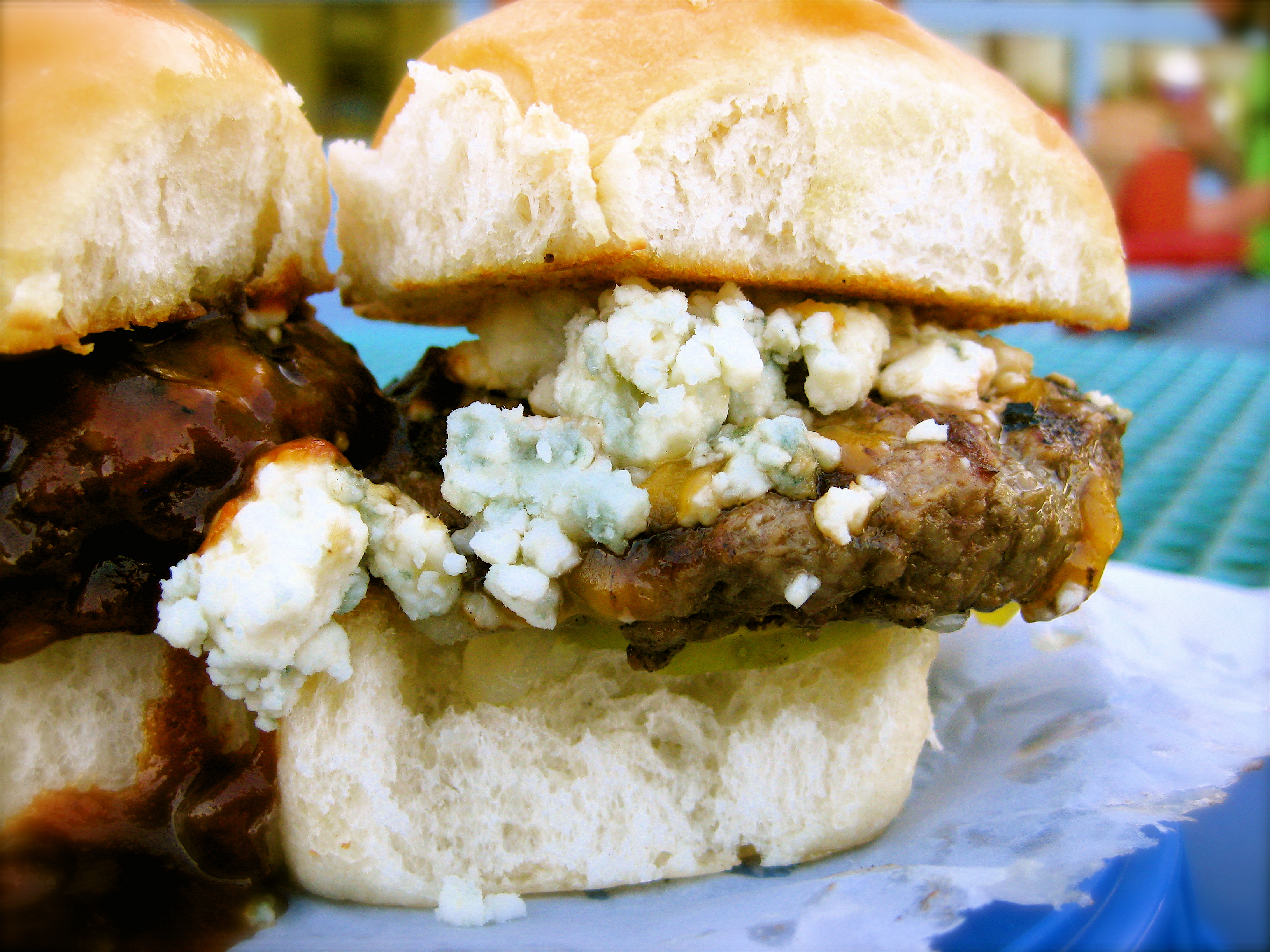 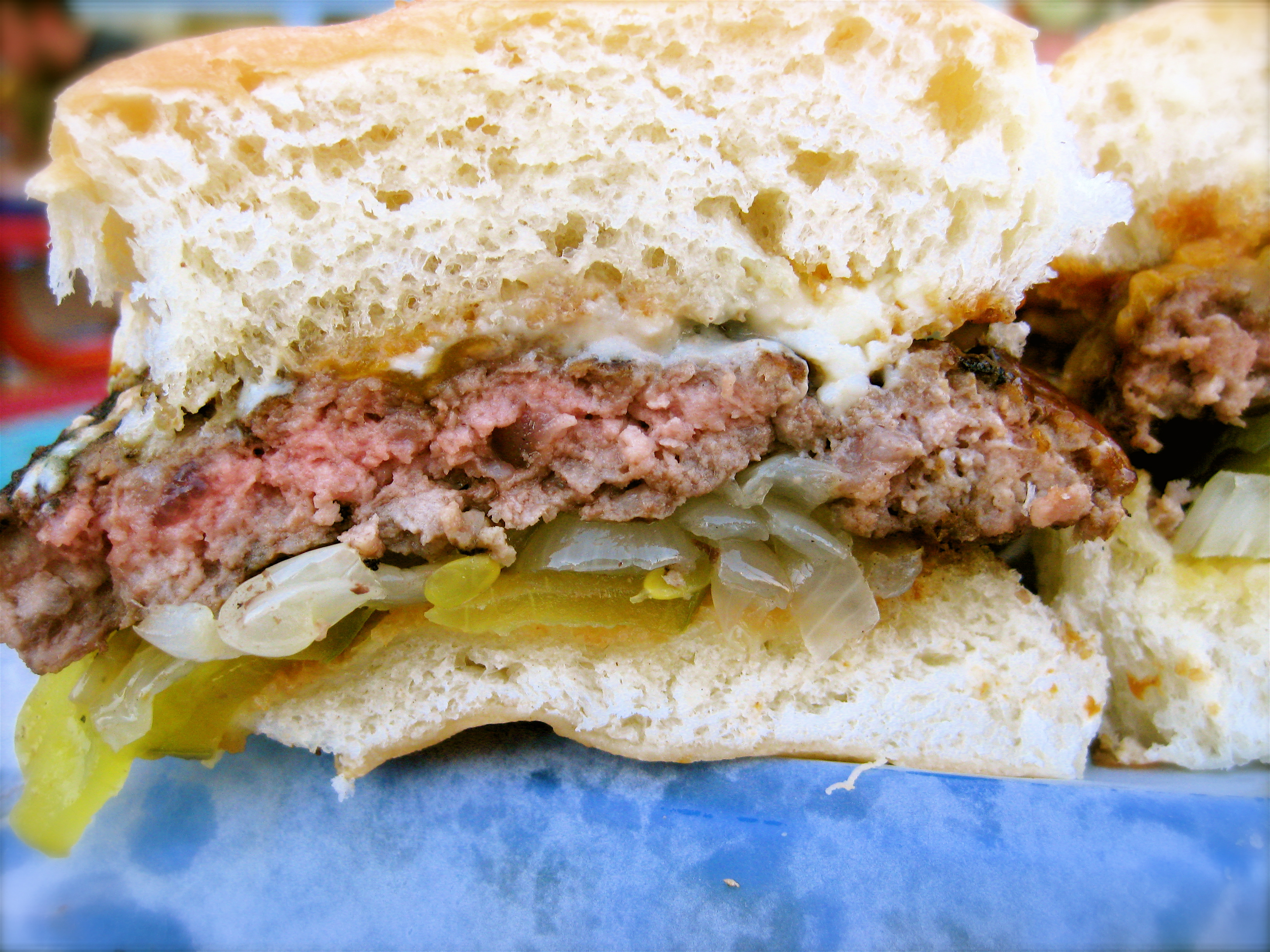 The decision to go blue on a cheeseburger is the equivalent of taking the riskiest decisions possible in a Choose your own Adventure Book. There is no turning back and one can’t promise it will always work out right. Indeed you may find yourself living out the rest of your days in that Magic Sand Castle. Over the years I have encountered some exceptional blue cheese burgers, burgers that elevated the dining experience from a tall can of Budweiser to a perfectly decanted bottle of Bordeaux. The blue cheese cheese burger is almost always a memorable affair but they don’t always work out in the end. The Violet Crown, topped with blue cheese and grilled onion sounded like a decadent little treat on paper, but when burger was pressed to lips, it just didn’t compare to the Allandale or the Rosewood. The blue cheese single handedly dominated the slider. A slider whose heft and girth almost belied the term. And yet with this reasonable amount of beef on bun; the blue cheese came out as being the alpha male of flavor. Both White Manna and White Castle, titans of the slider world wielded their reputation on the concept that the small form burger need little topping beside pickle and onion, perhaps a slice of American cheese. Lessons that could be applied to the Violet Crown. Try one if you must but I believe from a ratio standpoint that blue cheese simply cannot work on the burger canvas known as the slider. 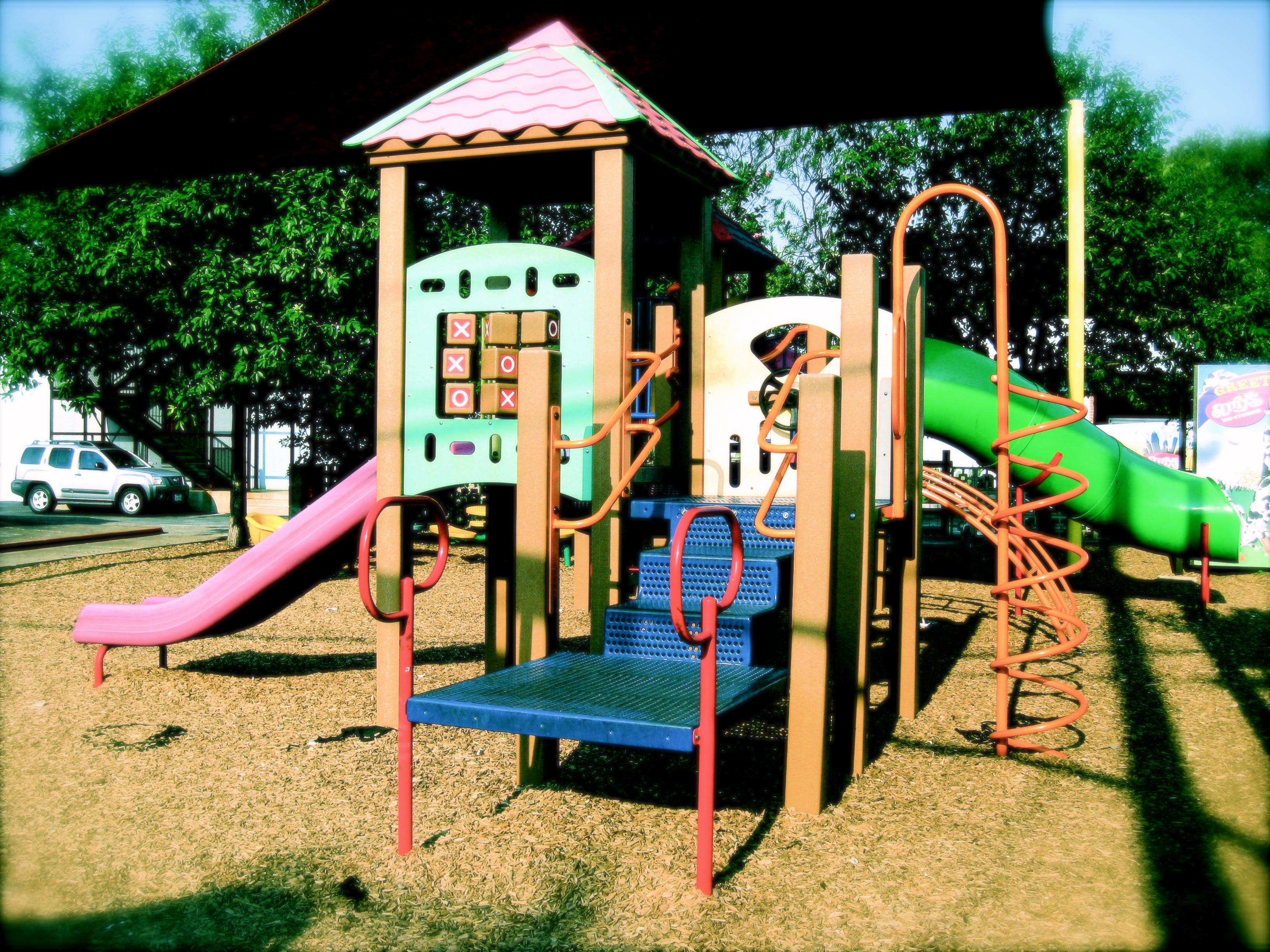 At long last we have the other essential component of Phil’s Icehouse: the Playland, or Playscape as some like to call it. This place of solace for the weary restaurant patron parent solves so many dilemmas at once: exercise, nourishment, reward and punishment, email/text/socialmedia hour and perhaps most importantly a place to enjoy a cold one legally: 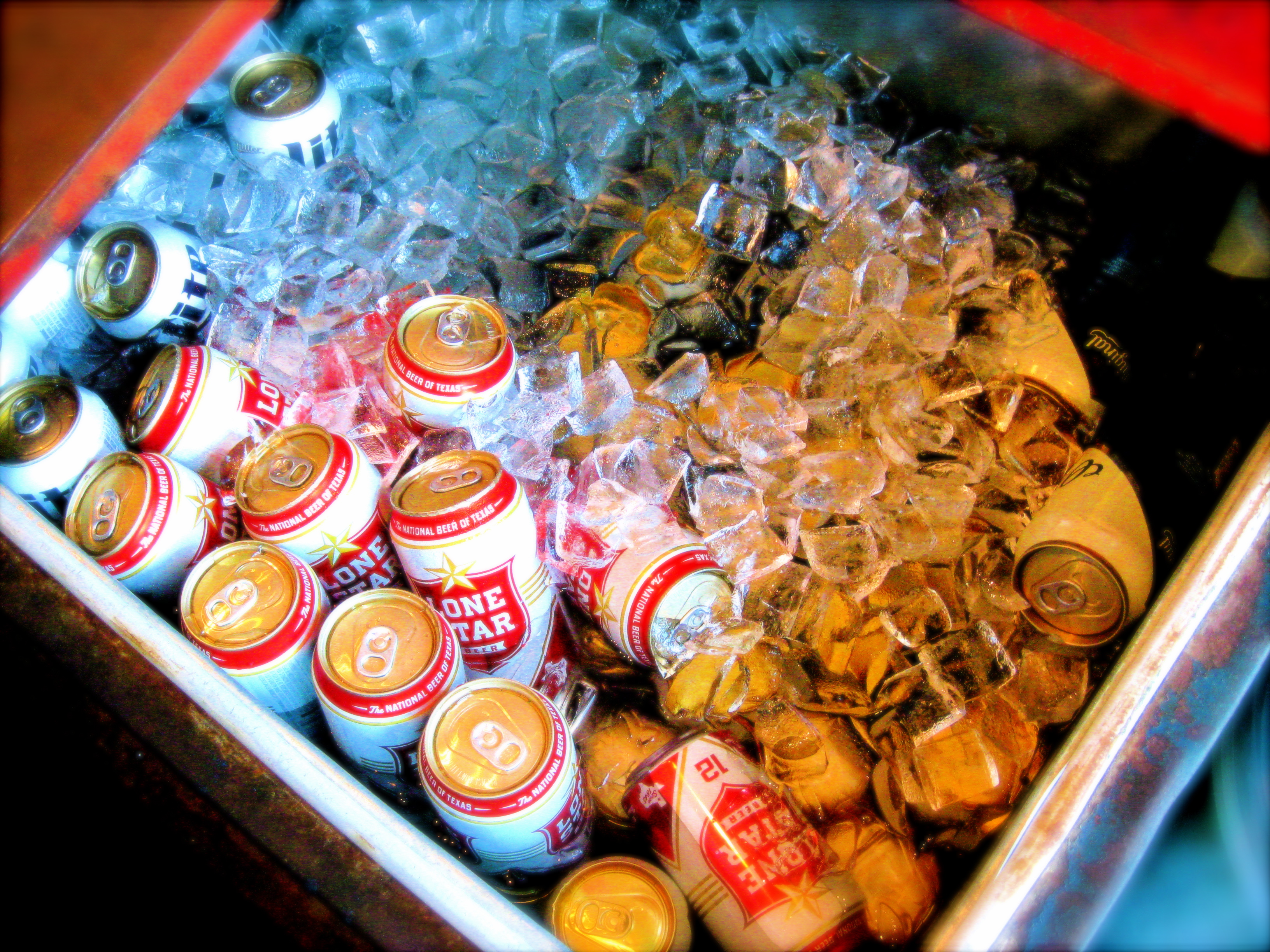 Try pushing your kid on a swing with one of these in you hand and you are forced to wrap your tall can in a brown paper bag, and let’s not even get started on the series of dirty looks. But not at Phil’s, where much like Hamsterdam in the Wire – there is no need for a paper bag and no one will judge you either. Far be it from me to advocate anything other than safe and sober parenting at all times but here is a tip fellas: offer to take your lady and little one(s) off to a spot like Phil’s. Offer to pay, offer to be the designated driver and let the relaxation of your better half begin while you take down a bevy of burger sliders and, wait for it – look like the hero. Yeah, your welcome.

Beyond the playscape and beer factor lies a slider experience with serious depth thanks to eleven different options plus the occasional chalkboard special. And beyond even the burgers is a restaurant that has a lot of heart, not because they are caught up in the hustle of our crazy food world but because Phil’s Icehouse isn’t just a restaurant, it is a living breathing tribute to a great friend. For many of us, myself included – friends become family, and like family members that have left us in body, it is up to us to make sure they live on in spirit. I never knew Phil Clay, but I’ll wager he was a guy who liked to unwind with a beer and eat a good burger. A fun guy he must have been, because that’s exactly what Phil’s Icehouse is . . . a lot of fun. 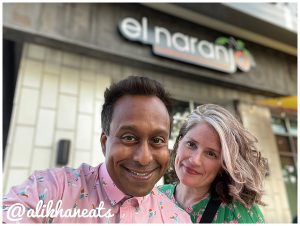