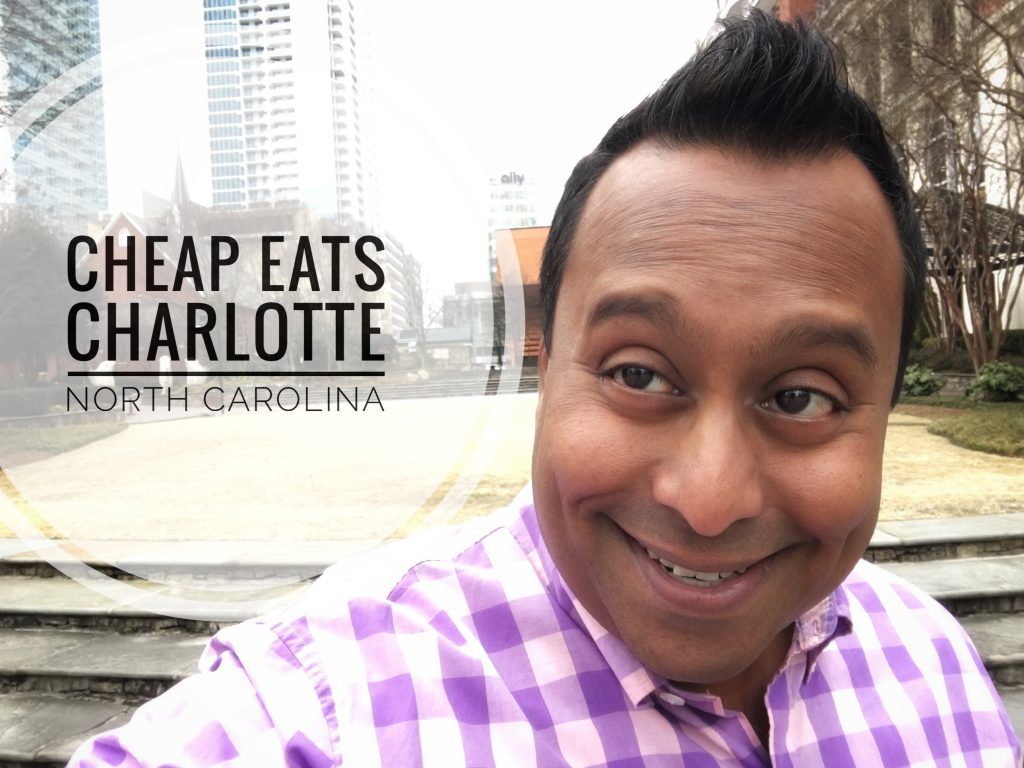 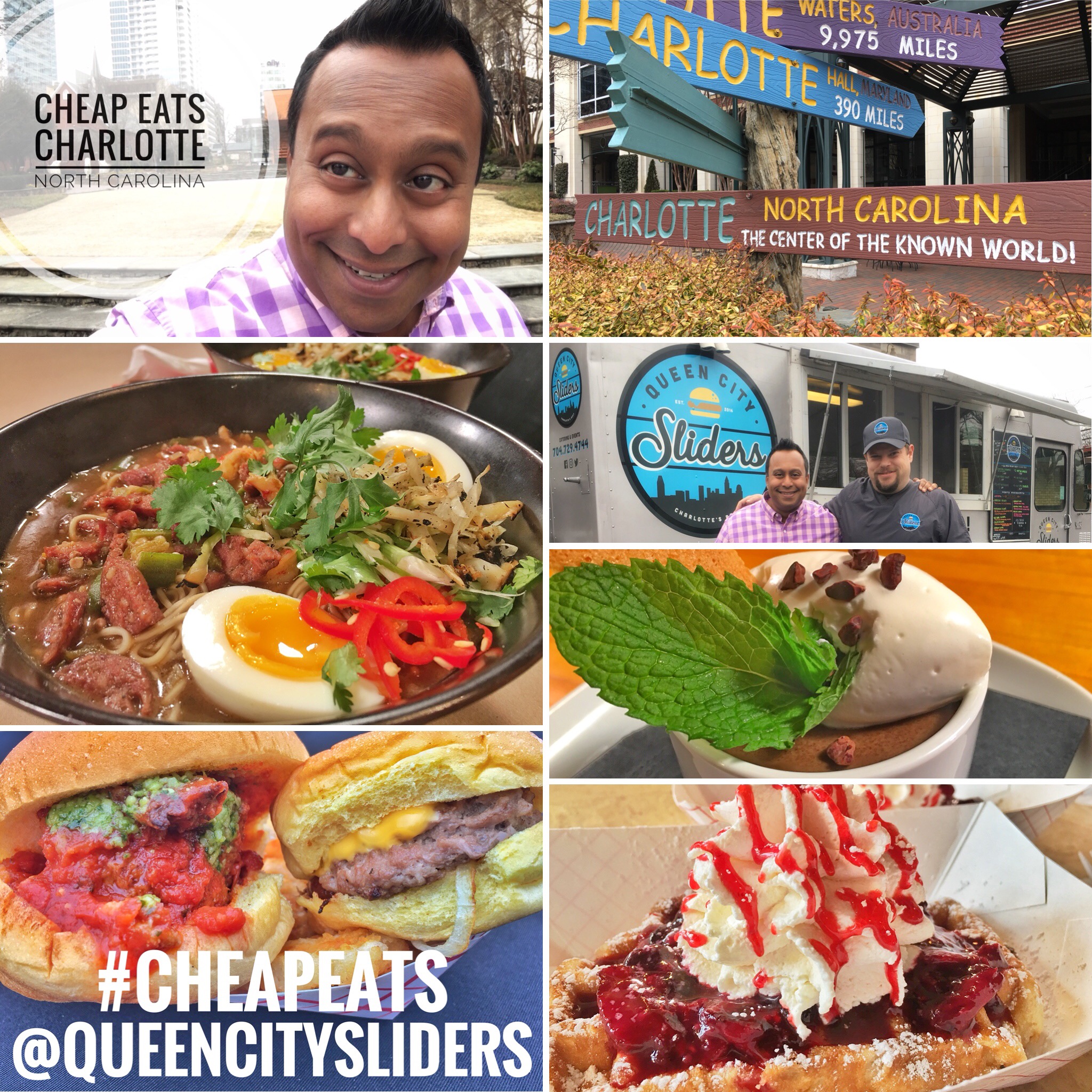 Cheap Eats Charlotte was a landmark episode for me: this was the 50th episode of Cheap Eats. Hard to believe three years ago it all started with the pilot episode in Minneapolis but here we are. Fitting that this special episode featured some of my favorite things about food: burgers, food trucks, chocolate and food culture collisions. Charlotte is a growing town that likes to eat and with that, let’s take one more big bite of Cheap Eats Charlotte!! 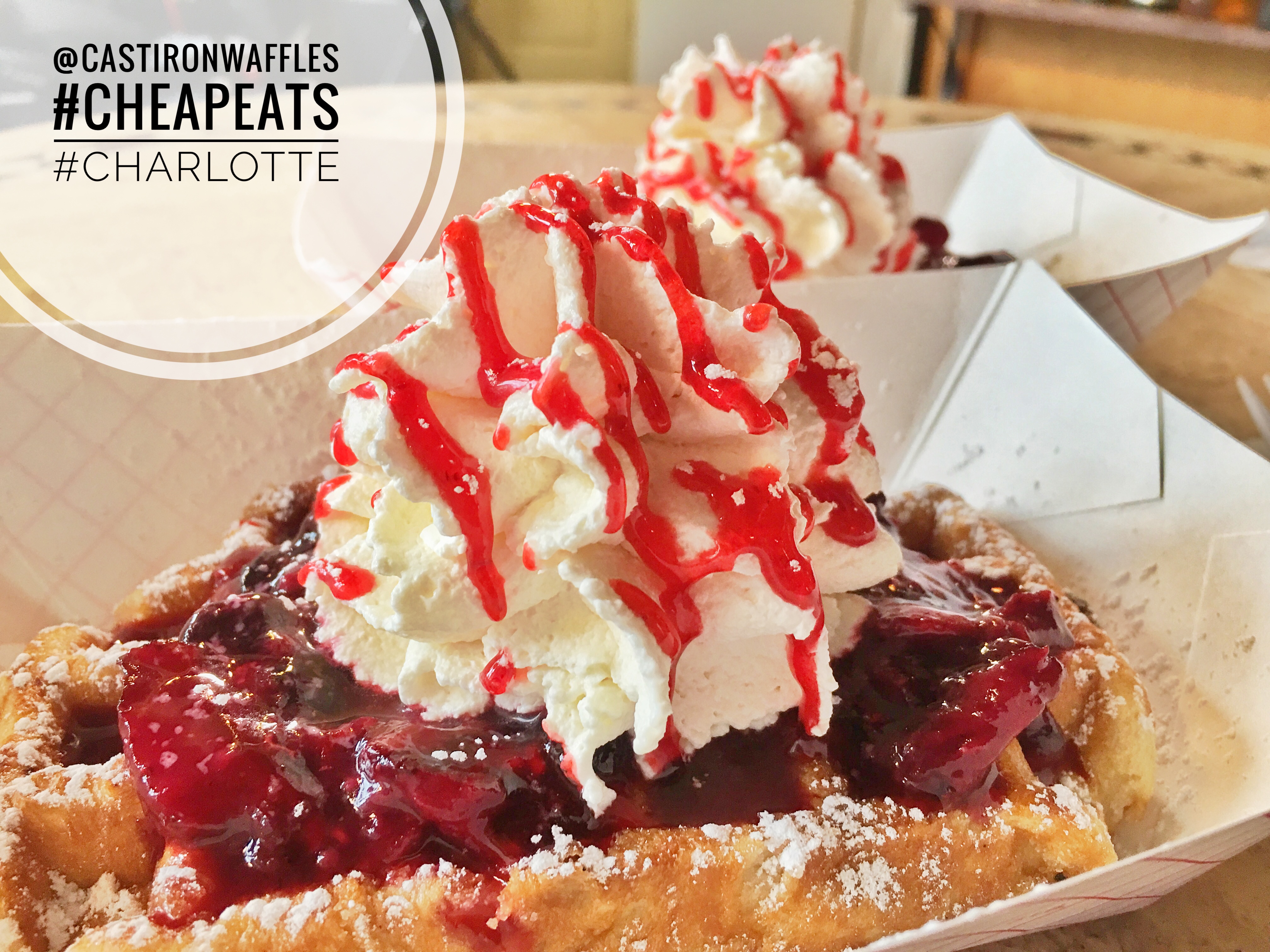 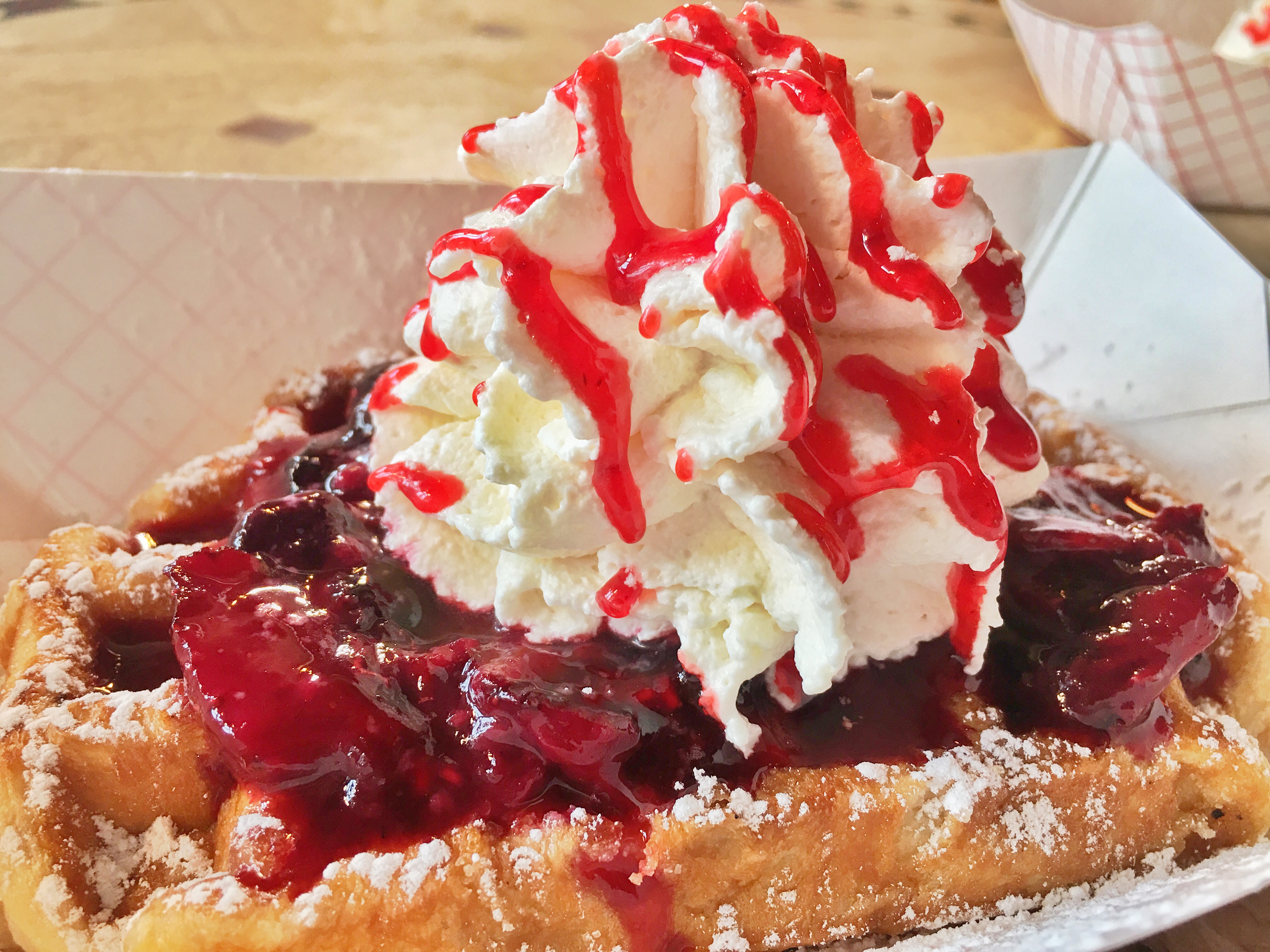 The Vitals:
the spot: Cast Iron Waffles 9604 Longstone Lane Charlotte NC 28277
the eats: Slowberry Waffle
the bucks: $4.99
the full nelson: the best $5 waffle I have ever found

I gotta say Cheap Eats Charlotte made my job easy. Straight tell me you wouldn’t pay $5 for that waffle up there! Set up like a coffee shop, Cast Iron Waffles pretty much nails what people want for breakfast on a weekday: quick, cheap, delicious plus they sling coffee. When it comes to sweet breakfast, you really can’t beat berries and cream which made the Slowberry my choice start to up my Cheap Eats Charlotte day. But you are really here for the Liege waffle: a straight out of Belgium waffle that has pearl sugars in the batter itself. Of course as this griddles up the sugar caramelizes, allowing sweet bites before you even get to the syrup but really this waffle is all about texture. The special waffle irons create a marvelously crisp exterior to contrast the chewy middle. And. It. Costs. $5. I mean c’mon . . . 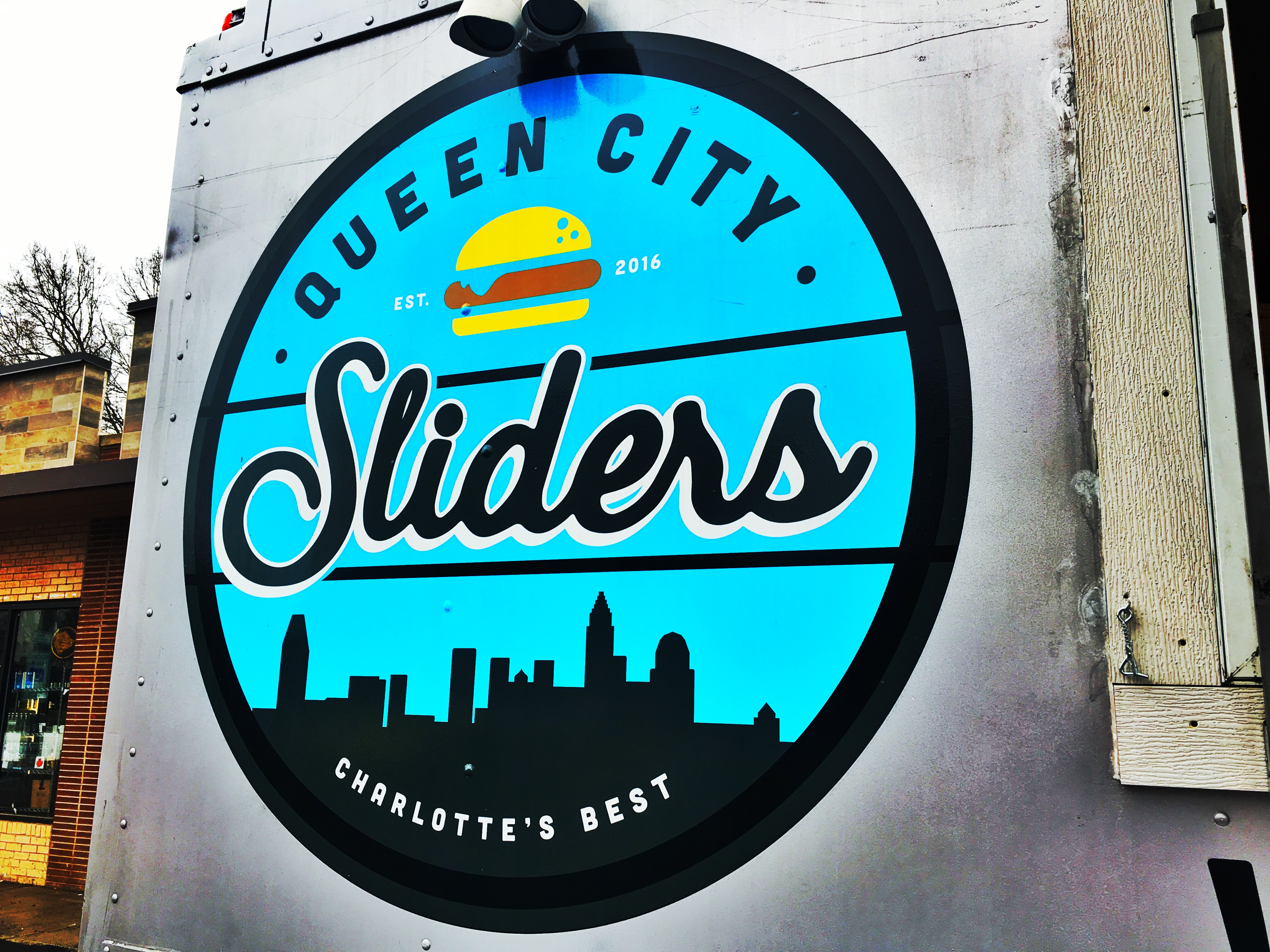 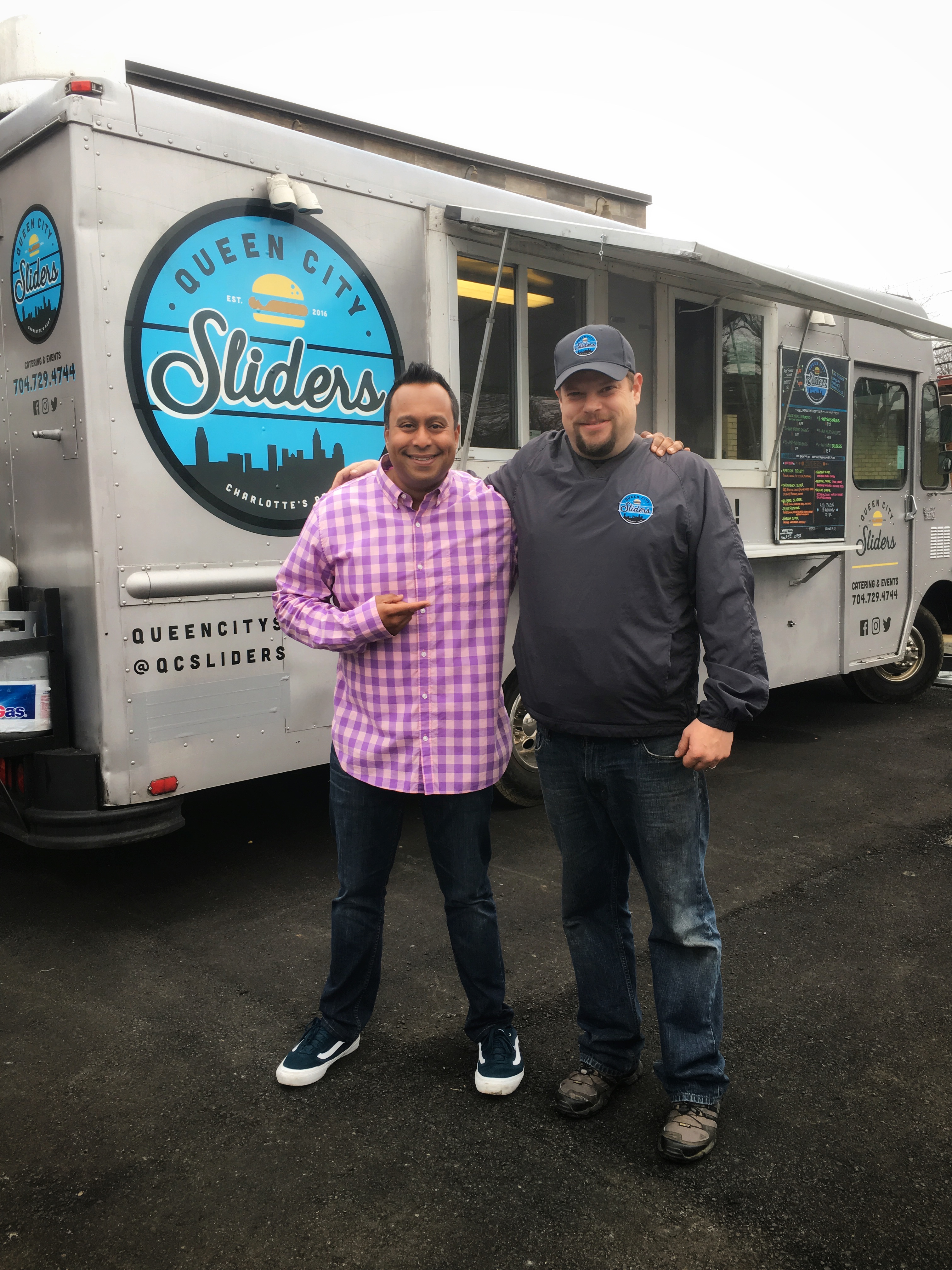 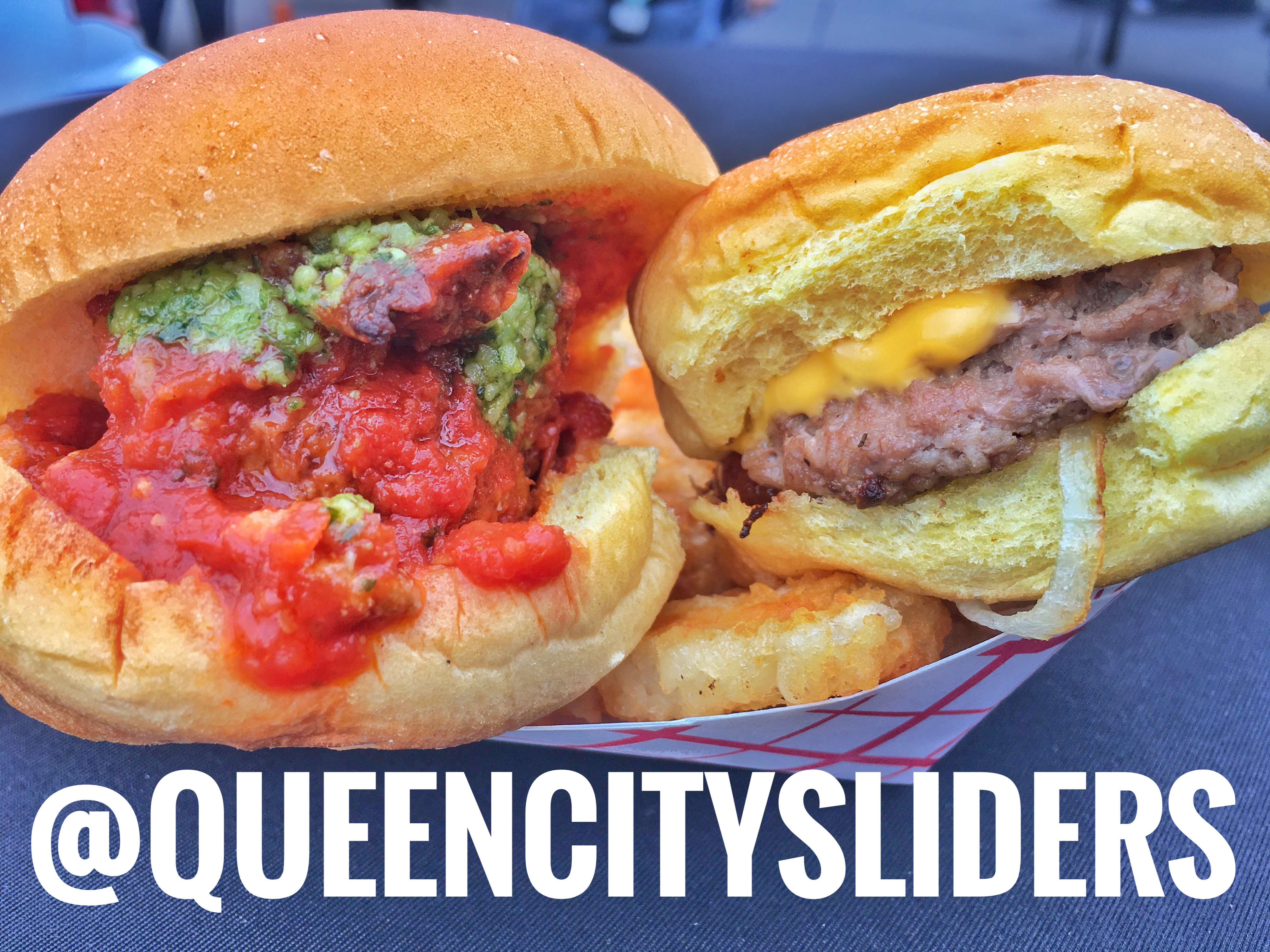 The Vitals:
the spot: Queen City Sliders a food truck roaming around Charlotte NC so check instagram, twitter and facebook
the eats: Meatball Slider and QC BBQ Slider
the bucks: $9 for two sliders and tater tots
the full nelson: Legit Sliders via a New Jersey native

I do believe Richard Harrison loves burgers about as much as I do which is probably why the New Jersey native introduced proper sliders to Charlotte via this food truck in 2016. I suppose everyone knows what a slider is but how many of us have had an excellent one? I’ll admit that up until Cheap Eats Charlotte . . . I had not. Sure I have made them a plenty with some Kings Hawaiian rolls and found solid burger joints that serve up slider options but what of the “Slider only” establishments?  Contrary to the late night drunk guy’s theory: White Castle ain’t the be all end all, it’s a place called White Manna in . . . yup, New Jersey. So with Rich hailing from the Garden State, expect these sliders to serve up the perfect meat to bun ratio and cooked through, but still juicy.

Queen City Sliders steps it up with creative options, most notably the Meatball slider which shows off Richard’s years growing up watching his mom simmer red sauce on Sundays and the QC BBQ slider where Rich gets creative to the tune of putting chipotle peppers in the barbecue sauce. Tater Tots are a comfort food restaurants have certainly taken advantage of over the last 10 or so years but besides a Minnesota hot dish, I ain’t seen anybody do something more fun with tater tots then sticking them in a panini press, essentially turning them into hash browns. All that with a price tag of $9 and I’m two for two rolling in Cheap Eats Charlotte. 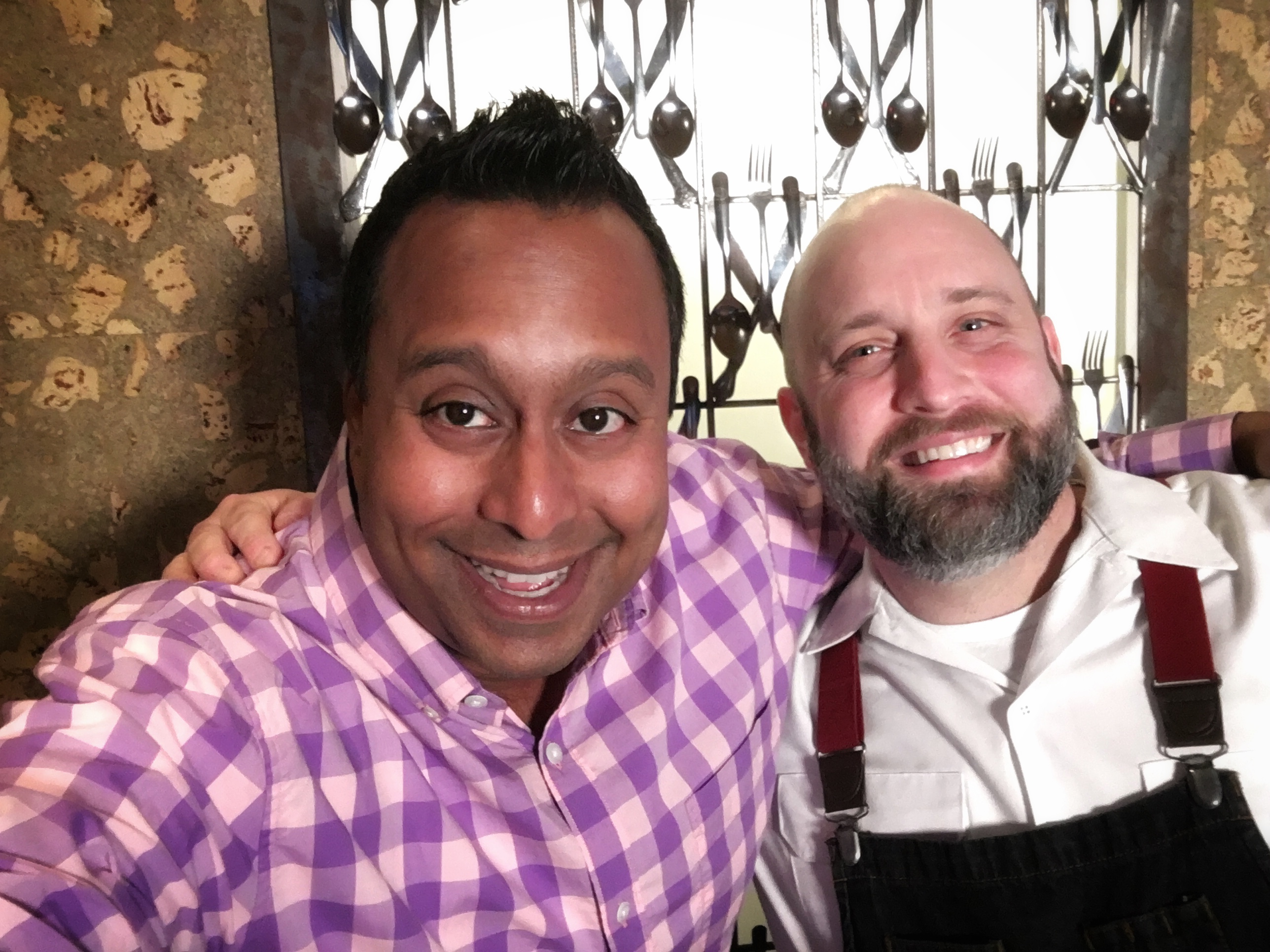 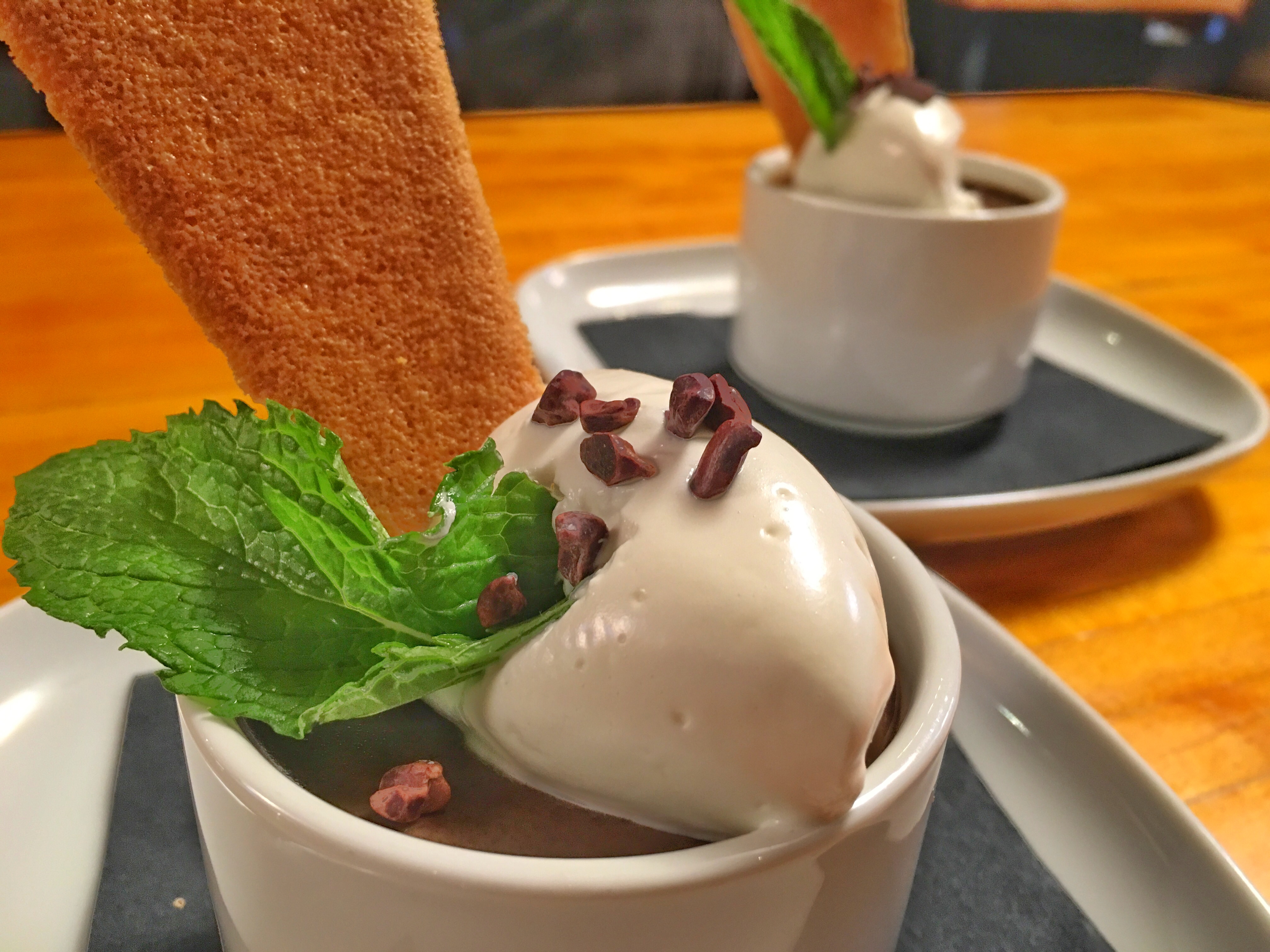 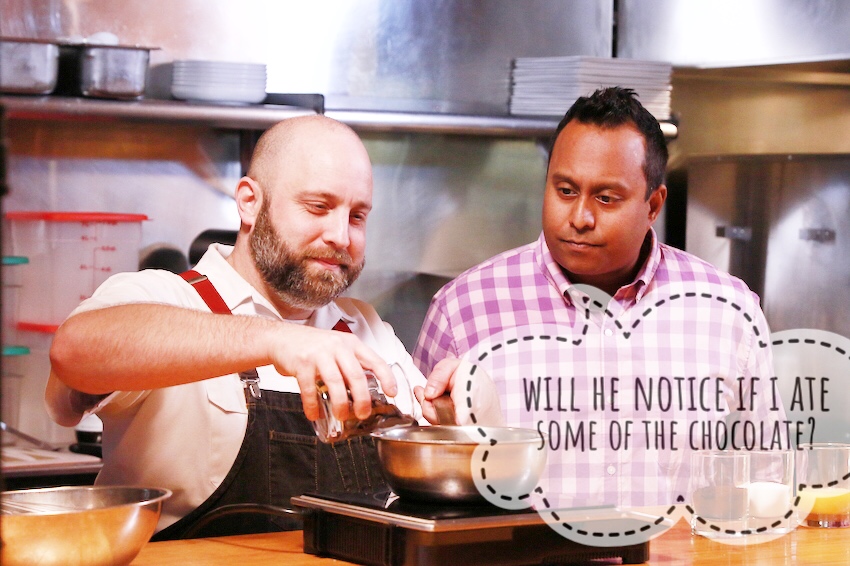 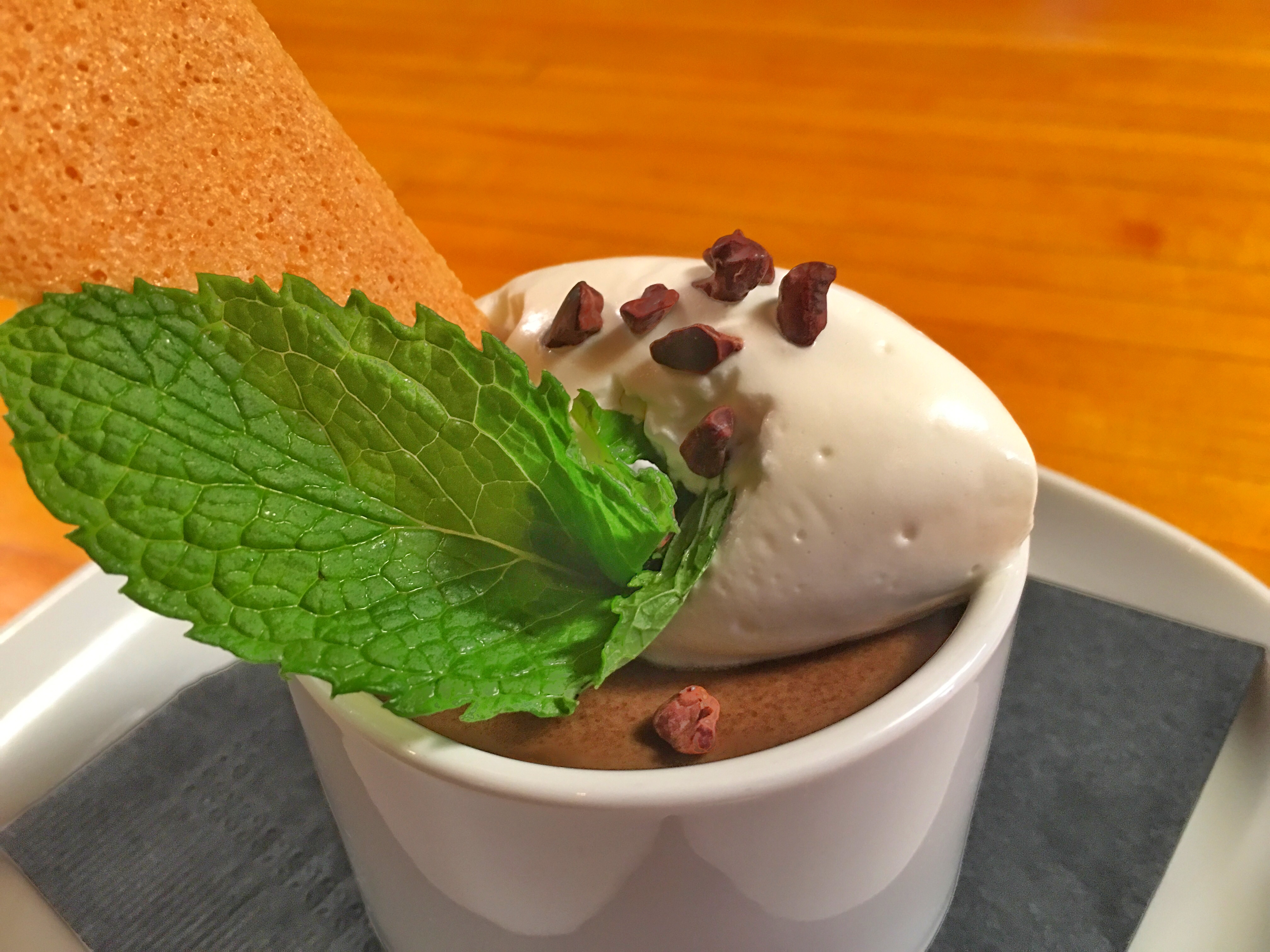 The Vitals:
the spot: Good Food on Montford 1701 Montford Dr Charlotte NC 28209
the eats: Chocolate Pot de Crème
the bucks: $7
the full nelson: Slip in and out of one of the sought after restaurants in Charlotte for under $10

It really doesn’t do justice to call Pot de Crème “a chocolate pudding” anymore than saying “let’s go to Good Food on Montford and get the snack they showed on Cheap Eats Charlotte”, because there is just so much more to both. With regards to the chocolate Pot de Crème at Good Food on Montford, know that you are not getting some chocolate pudding served on a cafeteria tray. You are in fact getting a rich, supple and sensuous dessert that requires precise cooking to ensure a texture that makes Pot De Crème taste like chocolate mousse on steroids.

As far as the restaurant goes, know that you will break the Cheap Eats budget if you choose to dine at Good Food on Montford for dinner. But the beauty of Cheap Eats isn’t to shun restaurants that at first glance appear to be out of our price range but to find ways to get a taste of many experiences without breaking the bank. Good Food on Montford is a tough table to snag and Chef Larry Schreiber is a serious contender for one of Charlotte’s best chefs but this is also one heck of a spot for a Cheap Eats Charlotte snack. So scrape up the $7 and don’t miss out. 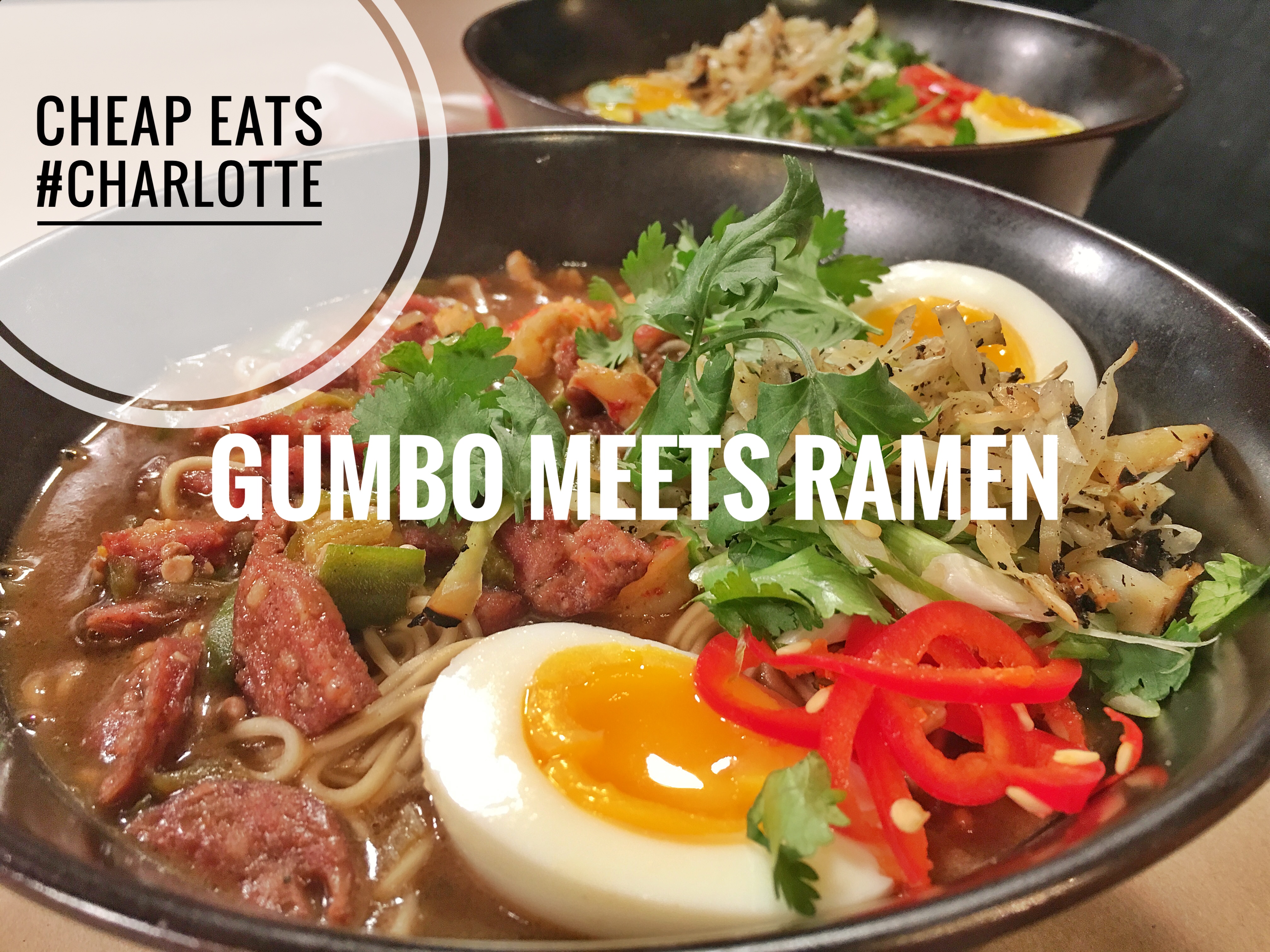 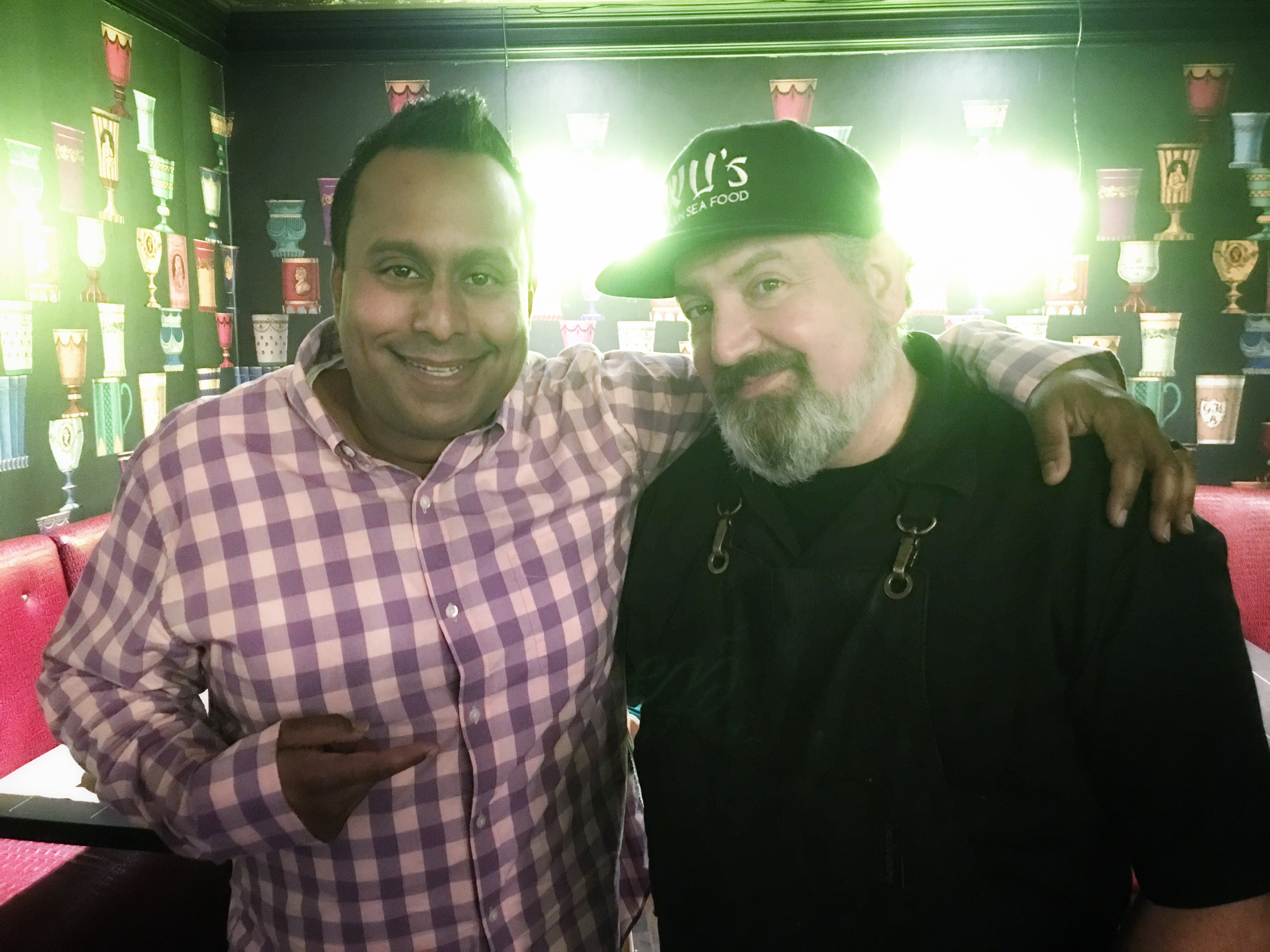 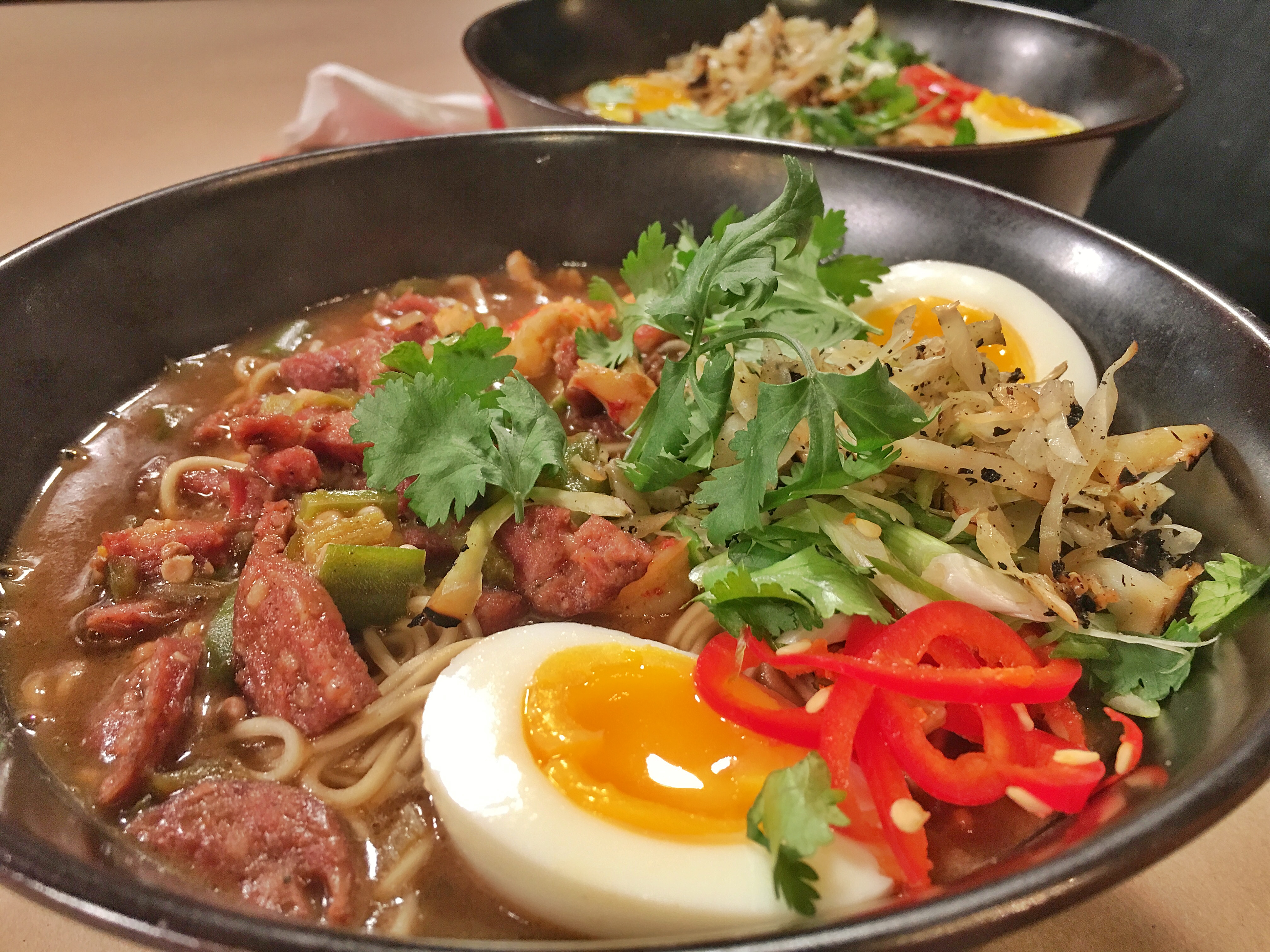 It is an unfortunate truth in the restaurant industry that good restaurants close, as was the case for Wu’s Cajun Seafood. It isn’t the first time its happened for us but no doubt this is a loss for Cheap Eats Charlotte. I will always look back fondly on the gumbo ramen not as a gimmicky fusion dish, but really an honest observation by Chef Troy Gagliardo that noodles can do the same job as rice in a gumbo, and can be a lot more fun. And what better noodle to use in a hearty soup than ramen’s tonkatsu noodle?

Thinner than a traditional gumbo, the heart of the flavors reside in Cajun country with the Asian elements such as the charred cabbage, and the kimchi marinated egg acting like an all star supporting cast. Still the tonkatsu noodles really change the dynamic of this gumbo and how you eat it: with chopsticks. I asked Chef Troy if this is “really a gumbo or really a ramen?” He replied “kinda both and kinda neither”. I believe it is simply something that was all his, as was Wu’s Cajun itself. Thankfully Troy’s restaurant group, Bottle Cap, keeps him busy with a number of concepts most notably Ink n Ivy with locations in Charlotte, Greenville and Charleston . Still Wu’s Cajun Seafood was a cool concept, a great way to end Cheap Eats Charlotte, and I’ll miss it. 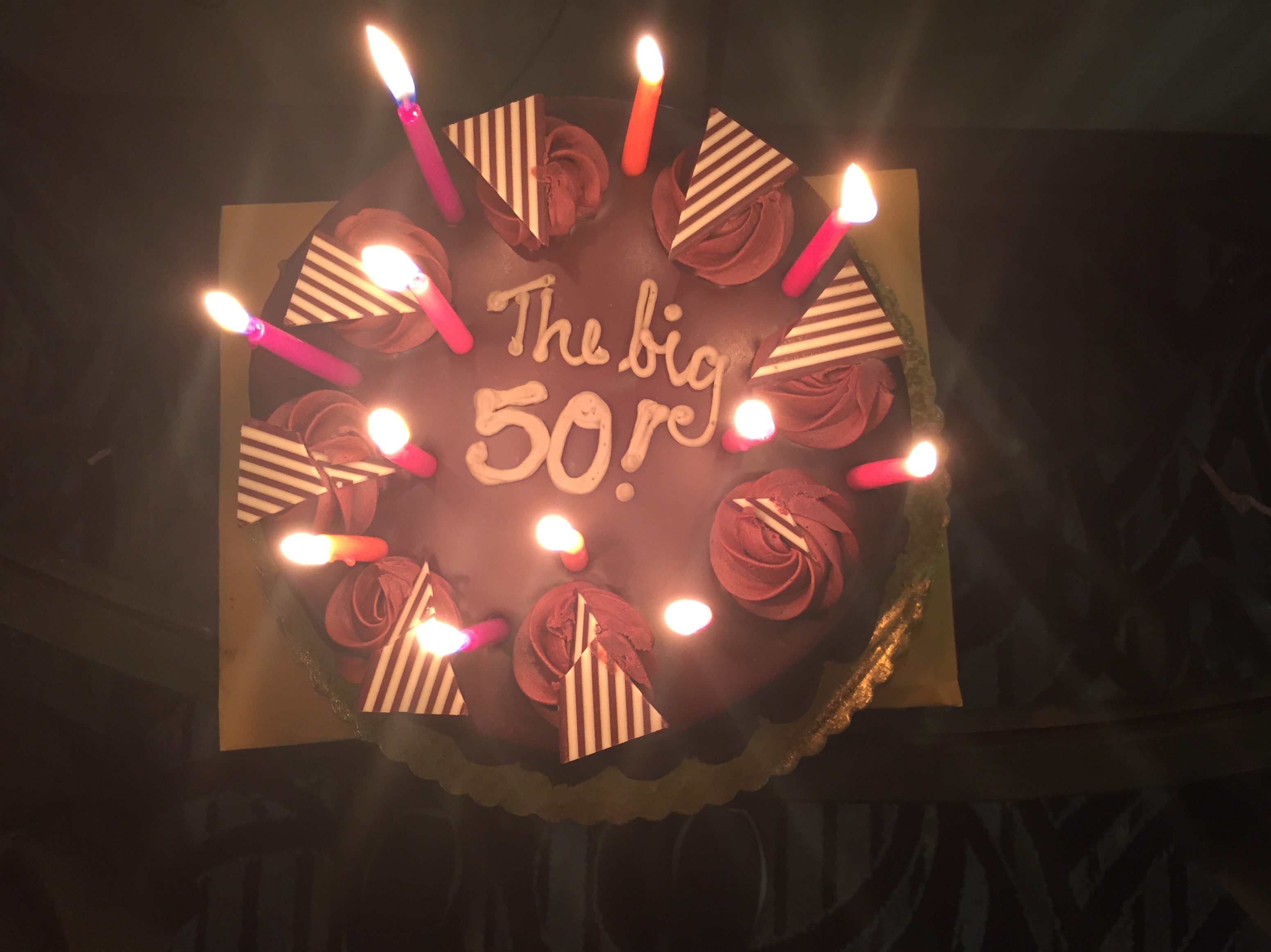 Oh yeah baby! The BIG 5-0. Cheap Eats Charlotte will definitely go down as a special one for yours truly. Yes, we went to a thriving city with a food scene that surprised me with quality, diversity and affordability. But mostly I’m thankful that you all kept watching to get us to this milestone. And big ups to the best film crew ever to share this journey with and be thoughtful enough to spoil me with this delish chocolate cake – my favorite too. It’s like they somehow know all fav foods . . .

Until next time my friends. Stay hungry. And thrifty.