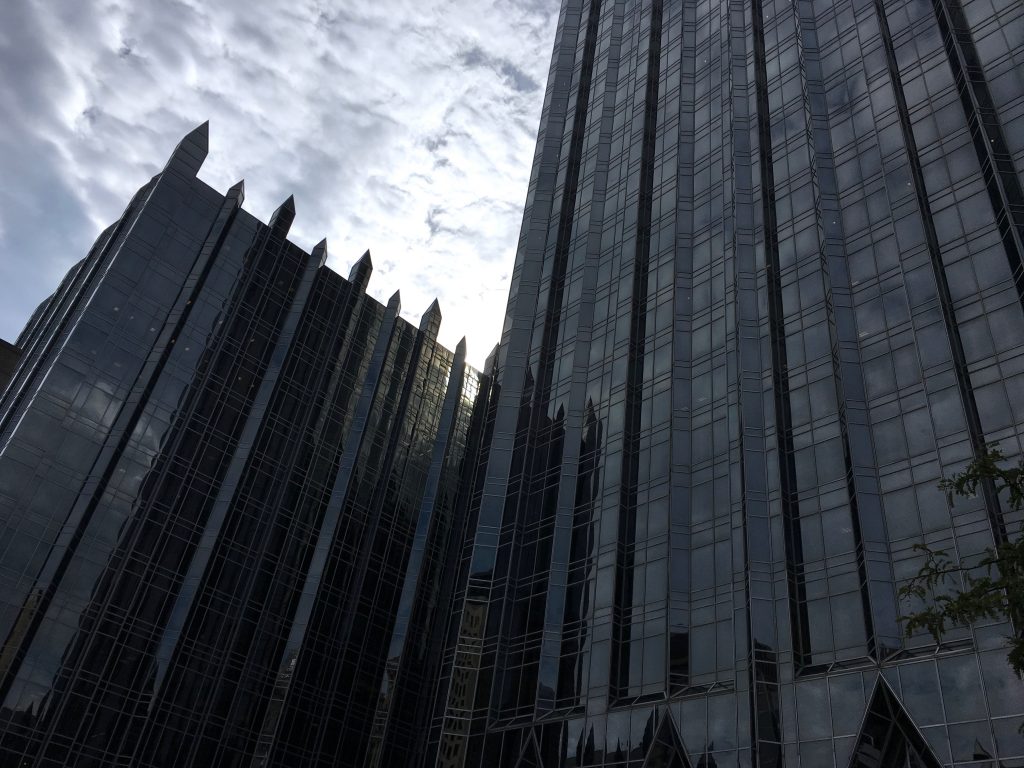 Pittsburgh. The shining blue collar city on the hill. A town that is as big as a city needs to be. Three major sports franchises. Loads of neighborhoods that teem with history, character and characters. And forget about an “accent”, Pittsburghese sometimes seems like its own language. In some ways I wasn’t surprised to find great Cheap Eats here. But I was impressed by how much the city has become a serious food town. Like much of the cities we cover in Season 2 of Cheap Eats, Pittsburgh is a city in transformation, and the food scene is a big part of it. As I look back on the Burgh, I think of an experience that slips in moments of sophistication during a humble feast for the soul. But ya know what? I’ll let the pics just tell you all about that.

The Vitals:
the spot: The Commoner 458 Strawberry Way Pittsburgh PA 15219
the eats: Pan Seared Salmon, Mac n Cheese cast iron skillets, Duck entree specials
the bucks: pray you get out of here for $40 with a cocktail
the full nelson:  fancy as it should get, your belly will be full but this is a splurge for the true cheap eaters

Smartly billing itself as a gastropub, and nestled underneath a swank downtown Pittsburgh hotel(no, I didn’t stay there), I must admit that I became a common sighting at The Commoner. The bar was well stocked with bourbons and televisions, the menu had half the items cooked in duck fat. It just felt as cozy as some dream man cave one would find in an issue of GQ magazine. The food aint cheap, but it is seriously good. The duck special(last pic) was a perfect example of contemporary fine dining flourishing beyond the likes of Chicago, NYC or SF. One bite of a perfect medium rare duck breast and you understand why people wig out when they visit France and eat. Then you pick your head up from the plate and realize the Cubs have a string of hitters that could win the World Series. Food this good with playoff baseball? Makes a $30 price tag seem semi reasonable. Is this Cheap Eats? HELL NO. But let me tell you this is the caliber of food one would struggle all day to prepare at home and even if the risotto was off the mark, I would come back for the $18 burger. On my birthday. 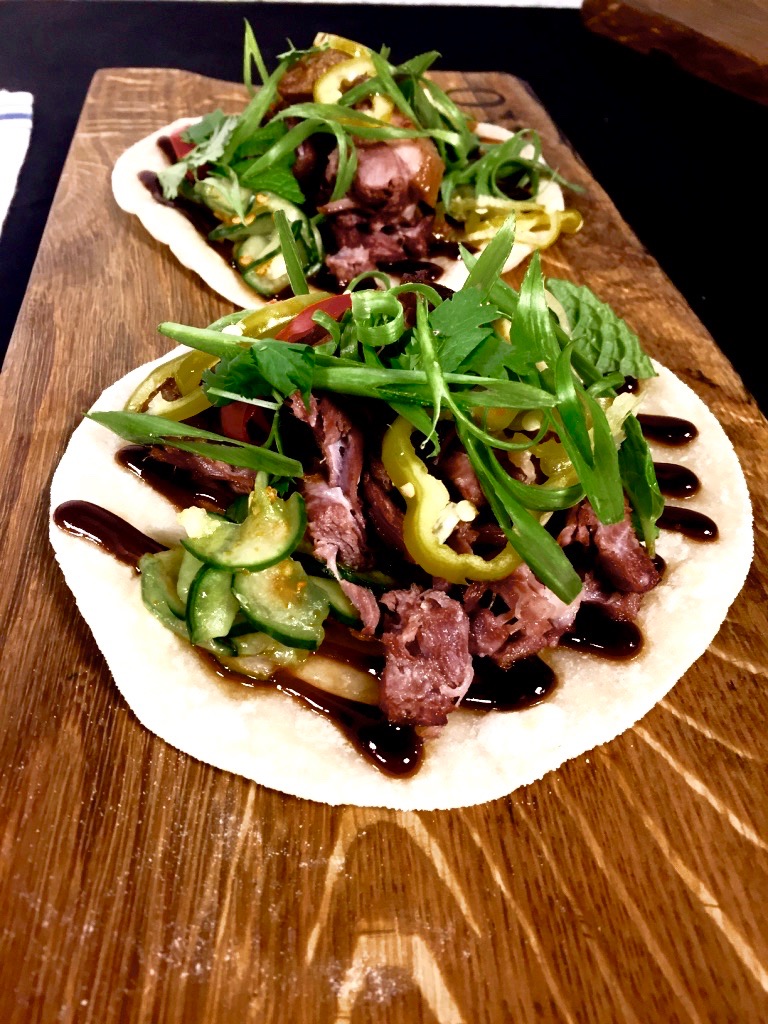 The Vitals:
the spot: Tako 214 6th Street Pittsburgh PA 15222
the eats: Chorizo tacos, Duck Confit tacos (2 per order)
the bucks: $12 and $14 respectively
the full nelson:  Excellent froufrou tacos that you can walk away from full after a single order

Tacos have a special place in my heart. They represent a deeper understanding of food that I attained in my 20 year residence in Los Angeles. Add to that the fact that Mexican food is blowing up in all parts of the country and chances are I am game to sample the local taco game in any zip code. Well folks, in the 1-5 triple 2, Tako is indeed legit for tacos and that’s coming from your boy who did 20 years in Cali only to stroll into Austin which has a serious taco scene of its own. Yes my friends, we are back to Cheap Eats now. Even though these tacos come in at $6-$7 each, knock down two and you can call it a night. Composition and homemade tortillas go a long way here and Chef Richard Deshantz pretty much has a midas touch when you look at the restaurants he has launched. Fitting a sunny side egg on a taco without turning it into a $6 mess is nothing short of a magic act – and unlike seeing David Blaine in Las Vegas, seeing Richard in da Burgh will have you leaving full and tako satisfied. 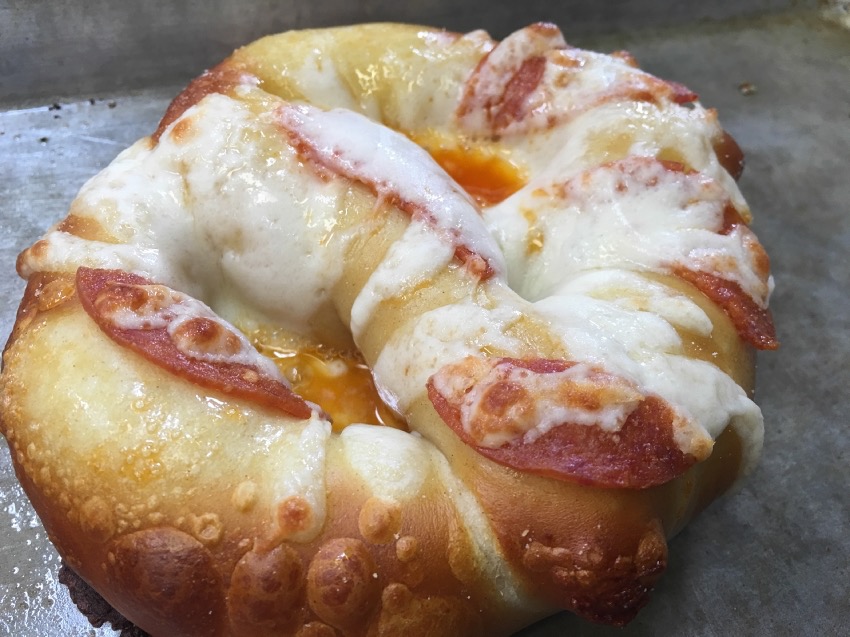 The Vitals:
the spot: The Pretzel Shop 2316 E. Carson Street Pittsburgh PA 15203
the eats: Pepperoni Pretzel but at these prices you can roam where you want to
the bucks: $1.50
the full nelson:  Break the chain of bagged and mass produced uninspired pretzels with a classic Pittsburgh Cheap Eat

Look, I really don’t dream about pretzels like I dream about burgers and tacos and that’s probably because I didn’t grow up eating pretzels in Pittsburgh – a place that cherishes these warm ‘n golden salted bands of dough like NYers to bagels or SFers to burritos. Part of my Personal Food Manifesto is to embrace the local culture, eat what the locals eat – join the tribe. Well in the Burgh that means getting down with some pretzels, and for $1.50 I really can’t find a good reason not to. The transformation of pretzel into pepperoni pizza was a humble culinary feat to witness. A simple but effective technique that addresses a dilemma I refer to as “The Greasy Pepperoni Pizza Effect” or GPE for short. How many times have you dabbed a slice of pepperoni pizza to take off a serious layer of grease? No dabbing necessary here. With the pretzel as the base, a thick layer of dough soaks up the excess oils well. It’s like a deep dish pizza experience that makes more sense – the pretzel dough is there to balance the heavy oil and kick from the pepperoni. Yes, it might be a move for befitting a round of Iron Chef America NCAA edition, but with Carnegie Mellon and University of Pittsburgh as collegiate cornerstones of Pittsburgh for decades and decades, suddenly the 89 succesful years of The Pretzel Shop’s existence makes total sense. The pepperoni might not be farm to table but the experience is totally Pittsburgh.

The Vitals:
the spot: The Square Cafe 1137 S. Braddock Ave Pittsburgh PA 15218
the eats: Lemon Ricotta Pancakes
the bucks: $10
the full nelson:  A total treasure of a neighborhood cafe serving up food well above the bar of  the diner breakfast standard

It takes a lot to get me off the savory breakfast train. And if there is Corned Beef Hash anywhere on the menu, well it’s gotta be something just shy of divine intervention to get me to go sweet on a breakfast sweet. Enter the Lemon Ricotta Pancakes at Square Cafe. These pancakes look more at home at a fancy brunch joint but Square Cafe is that type of bohemian breakfast spot that slips leeks into breakfast skillets and still moves customers in and out as efficiently as a top tier neighborhood diner. In the course of seeking out Cheap Eats in Season 2, there have been times where we find young ambitious chefs whose culinary vision somehow falls into our price point. Or perhaps we uncover a local food treasure that has stayed cheap for generations(Pretzel Shop anyone?). In the case of Square Cafe – they just like to do food “right”. Throw in some cocktails or situate Square Cafe at a downtown hotel and this menu increases in price by 50%. But at a downtown hotel you are not – rather you are in the Pittsburgh neighborhood of Regent Square. Yeah, this is a true local’s find. And locals, and you, deserve to know how good ricotta cheese tastes inside a pancake.

The Vitals:
the spot: Triangle Bar and Grill 2122 Monongahela Ave Pittsburgh PA 15218
the eats: Cheesesteak Destroyer or really any sub of your choosing in the Destroyer class
the bucks: $10
the full nelson:  As hard core Pittsburgh as it gets with a $10 sub that could feed two(but its so good you won’t share)

Last and certainly not least in the total recall of my Pittsburgh experience is the total Pittsburgh eating experience: Triangle Bar and Grill. Surrounded by factories, a few in operation, many no longer, the Triangle Bar and Grill is literally located in the shadows of Pittsburgh’s Industrial past. A lunch here is Working Class dining at its finest. Having a bar doesn’t hurt their cause and it pretty much seals the deal as a must stop before or after a Steelers game. I’ve already gotten flack from my Philly fam on even entertaining a cheesesteak from outside the 215 area code but I must say this: Pittsburgh is damn serious about their hoagies. Triangle has multiple options here so don’t think this is a cheesesteak only experience. However, like the birthplace of the Cheesesteak, Triangle knows what it takes to make a hoagie. Great bread, generous toppings and an assembly line of sandwich professionals who clearly eat here on their off hours. The mix of clientele at Triangle alone is reason for an out of towner looking to catch a glimpse of real Pittsburgh to make a it a worthy visit. Perhaps why this cheesesteak would draw the ire of a diehard purist is exactly why I dig it: the fully dressed cheesesteak experience. It sounds funny to say it but all that lettuce, tomato, mayo and vinegar brings me back to the food court days of my youth, where endless afternoon loitering at a video game store was rewarded with a chain cheesesteak feast. You best believe I ordered that sandwich with the works and of course it was a far cry from what I would come to know as cheesesteak bliss in the form of Tony Lukes or John’s Roast Pork, but early food memories are a powerful thing. Truth be told, my love for Triangle goes beyond the hoagie styled cheesesteak. I love the Triangle because the Triangle loves Pittsburgh and Pittsburgh loves the Triangle right back. 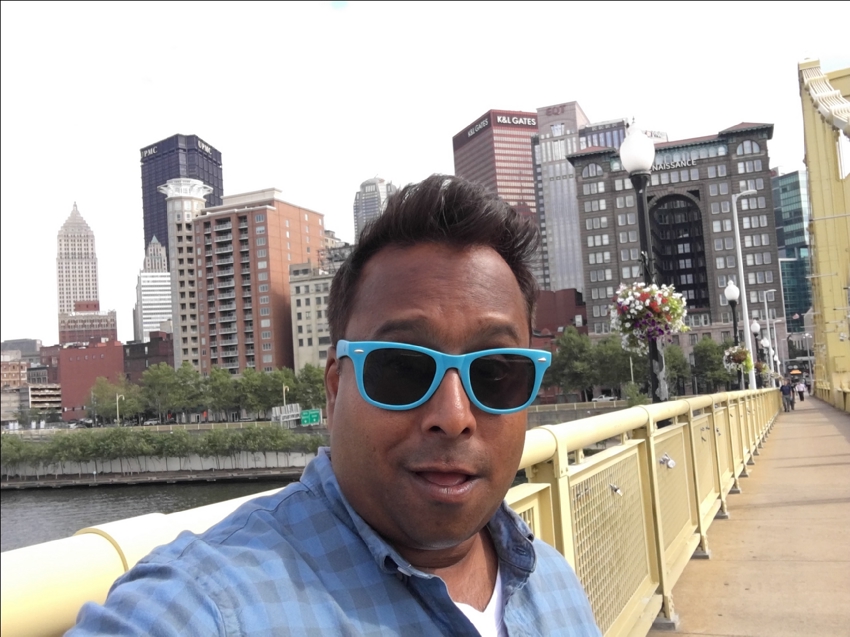 Oh Pittsburgh. That blue collar metropolis whose friendly demeanor appeals to my Midwestern roots. Whose history and diversity, reminiscent of the East Coast, appeals to my soul. It’s a city I would take my family to for a vacation in a heartbeat. And it’s a city that doesn’t just have good food, but is getting better at food. A humble yet proud populace who feel compelled to tell you that their city is on an upswing, heading in a new exciting direction. Whatever changes may come, I do believe Pittsburgh will stay true to its blue collar ethos. Always and forever, the Burgh.

And I’ll drink to that.

The Pittsburgh episode of Cheap Eats is currently available for streaming at Cooking Channel’s site or click here.