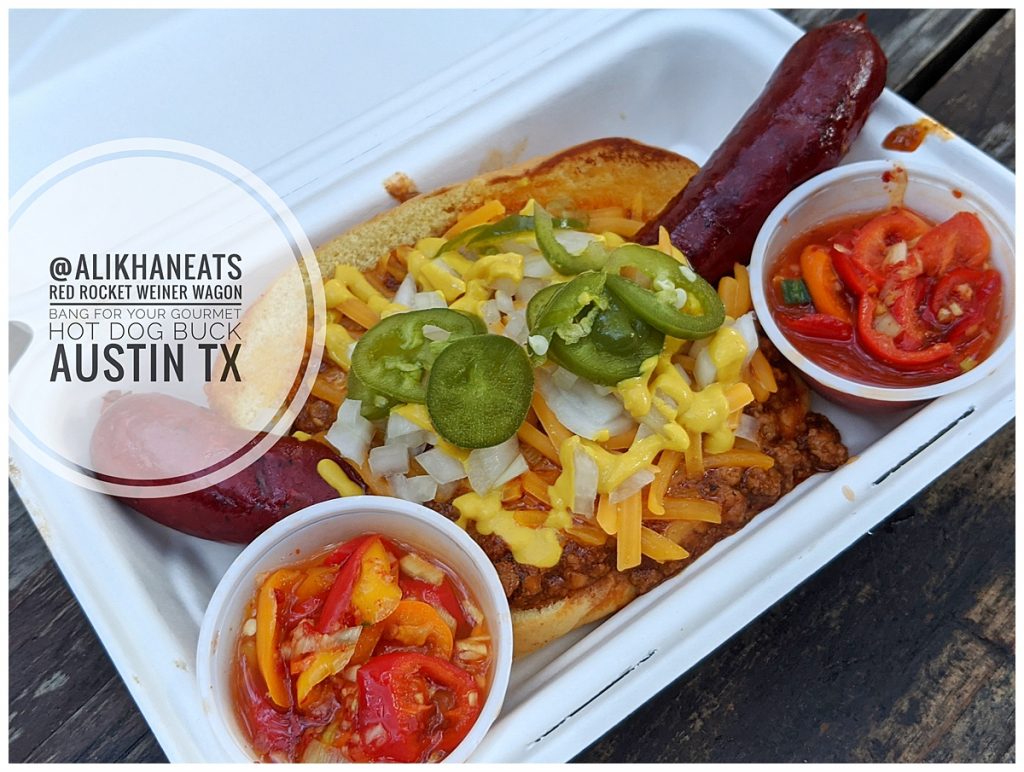 Watch out for the Weiner Wagon!!

The Vitals:
the spot: Red Rocket Weiner Wagon a pop up in Austin TX
the eats: Serious Hot Dogs
the bucks: $10.50 for the classic, $13.50 with brisket chili
the full nelson: Craft BBQ queens elevate a hot dog from stadium food after thought to premium tailgate food

Red Rocket Dogs just might be the breakthrough the hot dog world needs. Changing the game on what a premium hot dog experience means, much like the chef driven burger of the early 2000s, this is a hot dog I would gladly drop over $10 for. And finally, I can agree with that controversial debate on Twitter that a hot dog is a sandwich.

Because this one totally is.

Leanne Mueller and Ali Clem are queens of craft BBQ. La Barbecue, the first restaurant I featured on Best Thing I Ever Ate, still remains my gold standard for everything brisket should be. I was back at La Barbecue over the weekend and was also reminded that their mark of unconventional sides like house made pickles onions, jalapeños and more recently kimchi, the staple Korean condiment are also reasons why they are so good at what they do.

They have now turned to hot dogs, which at first mention, didn’t really fire up my imagination. As of last night, I have now seen the light. And it is red.

Coming in at 9 inches, the rocket dog is a true custom hot dog. The all beef sausage is made from shoulder clod and the casings are lamb. The spices are pronounced. My almost 9 year old felt the kick but continued on. The signature red color is reminiscent of a dried chorizo from Spain and the texture and intensity leans more like an air cured sausage though still far from a charcuterie classification.

The toppings are classic American hot dog through and through. At home and at the ballpark, mustard, kraut and occasionally relish are all I reach for. I’m mindful to not overwhelm the hot dog. A Red Rocket dog could pick a fight with any chorizo I have ever had, so the addition of cheddar and jalapeños are far from excessive. Plus the Red Rocket Dog is one big puppy. You would be right in assuming this dog is about the weight of a Texas sized BBQ link.

Best reason to ever eat a chili dog

Putting chili on a hot dog is about as necessary as eating a whole turkey leg at the state fair. But, it’s fun and we do it anyways. Now most of the time, the chili overpowers the hot dog but I’m sure you know that this ain’t the case with the intensely flavored Red Rocket Dog. Which isn’t to say that Red Rocket Dogs are sleeping on the chili. It’s made from La Barbecue’s brisket after all, plus a meaty mélange of sausage scraps too. The house made kimchi though is a game changer. I don’t think anyone has put this much thought into a chili dog. And if they have, I need to meet them.

If you’re in the Austin area you will be able to visit the pop up, just follow them on their Instagram account for their updates. Also know that you can buy these hot dogs at La Barbecue to make at home, or more importantly at a socially distant tailgate style party. I will most certainly be coming up with a recipe post for that + my top hot dog brands soon, so stay tuned.

And because I have to ask: where my dogs at? Well they clearly are at Red Rocket Weiner Cart. The best $10+ hot dog I have ever had. 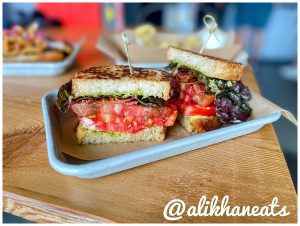