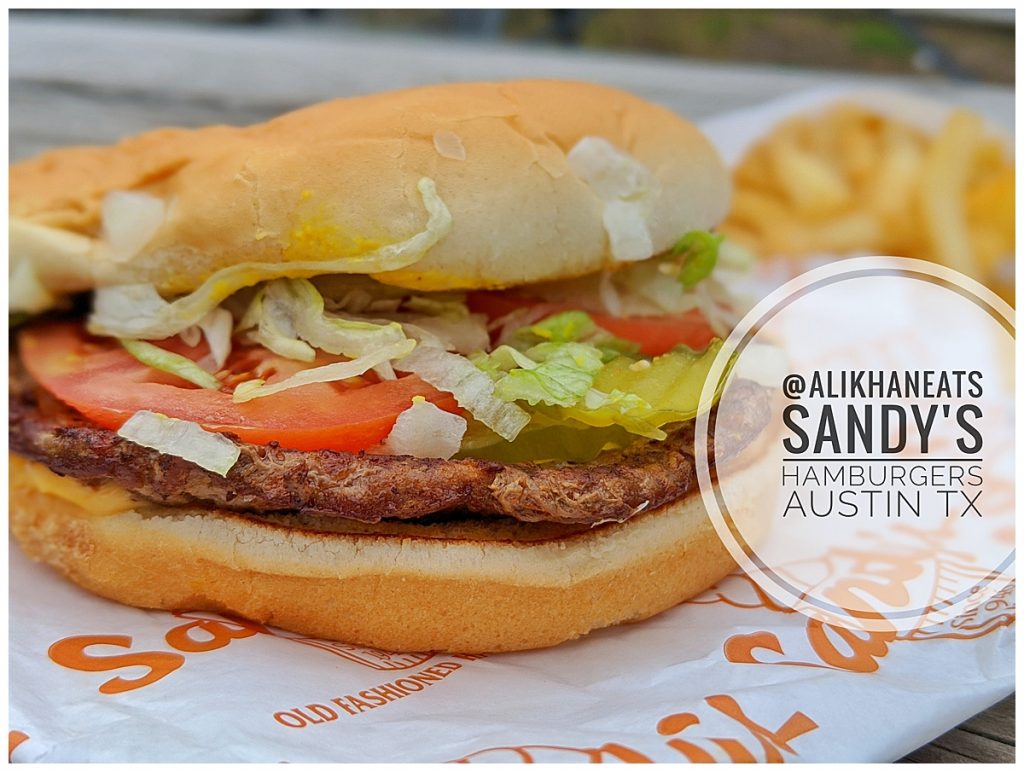 The Vitals:
the spot: Sandy’s Hamburgers 603 Barton Springs road Austin TX 78704
the eats: cheap burgers
the bucks: cheeseburgers for $5, a double will run $6.40
the full nelson: a nostalgic burger experience fueled by freezer to table fare

Sandy’s Hamburgers puts their frozen custard out there front and center. Sure it’s on the signage but if you do a little digging you might find more skeptical critics throw their weight to getting the custard vs the savory fare. I would do the same but I doubt I’ll ever go back here again.

But I still think you should. At least once. And here’s why.

The appeal of a happy meal

There is something so simple and appealing of the sight of independent fast food. Branding that doesn’t evoke publicly traded conglomerates still reap the rewards of childhood appeal. A bag of fries, a couple ketchup packets and a burger wrapped in paper appeals to the kid in us. I’m looking at this food and I want to eat it. Especially since I ate a vegetarian puttanesca over polenta for dinner about an hour ago.

Dirt cheap prices don’t hurt either. Sandy’s Hamburgers is about as affordable as it gets unless you are working off a dollar menu. Cheeseburgers for under $5 and combos for $6 and change. A double cheeseburger might alleviate the need for fries if you were so inclined to dump the starch. But you aren’t scoring big points for doubling down on the forgettable beef either.

Getting down to brass tacks here, Sandy’s Hamburgers are not very good. The beef is preformed and most likely comes in as frozen as the custard. The produce is lackluster, the bun is out of a bag and this cheeseburger barely had any cheese. I’m pretty sure I went through all those Hunt’s packets when getting through this burger.

Want fries with that?

No you really don’t. These pre cut frozen taters tasted mostly of some cheap cooking oil. To be fair I’m not much of fry guy. Fries like these are probably why.

So yeah, the food at Sandy’s Hamburgers sucks. And yet I still like it anyways. Sometimes you want food that isn’t trying to be anything more than a simple affordable effort. You crave cheap food, that exists however it does, to allow you to eat for pennies vs pounds. I know I can tell you where to justifiably spend $10 or even $20 for a burger. But that’s an entirely different experience, and frankly, one that is becoming the norm versus something unique.

Sandy’s Hamburger’s is special. Not because the food is memorable, but because it once was. They serve food that was once considered not just good, but innovative and managed to always stay affordable. At one point while digging up the history of Sandy’s Hamburgers, it seems that there was once a national chain. Originating in Illinois, Sandy’s competed with McDonald’s for a time before being swallowed up by Hardee’s. Sandy’s Hamburgers of Austin it appears predated the chain and staved off any would be corporate takeovers. Surrounded by a city that has changed immensely, Sandy’s Hamburgers remains Sandy’s. And for that very reason you should go at least once. You won’t regret it. I certainly didn’t.

And maybe I’ll even go back. Maybe.