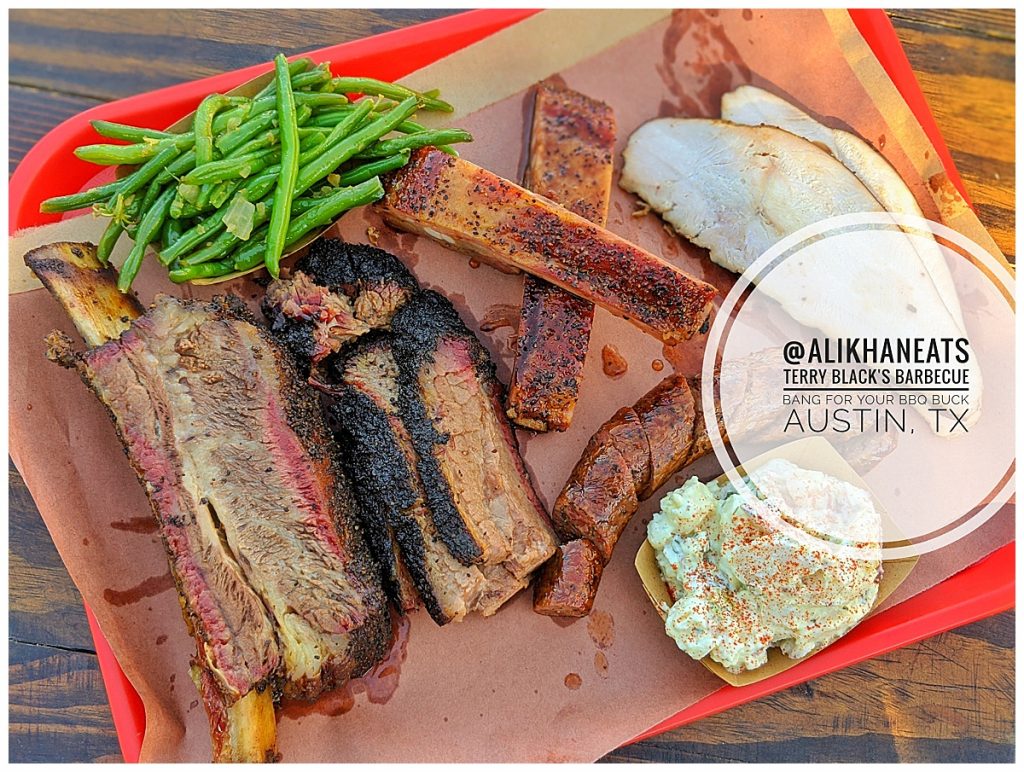 Terry Black’s Barbecue most definitely makes the 10 best list of Austin BBQ round ups. In casual conversation, Terry Black’s may get drowned out by names like Franklin BBQ or La Barbecue, which can add cookbooks, TV shows and a cult like following to their names. But that’s not to say Terry Black’s doesn’t deserve a cookbook or a feature on a show like Best Thing I Ever Ate.

You ask me, they got the best darn classic Texas sausage link in town.

Great BBQ in a restaurant setting

Terry Black’s is a place that has grown on me in the 5 years I have been living in Austin. Before I called myself a resident, an exploratory trip to Austin paved way to my first Central Texas barbecue experience: La Barbecue. They were they were just a trailer back then, close to Interstate 35, sitting in a gravel parking lot.

It was an eye opening experience to craft bbq and the mystique of the trailer setting with long lines and the reality of running out of certain items has stuck with me ever since. I raise a brow to conveniences like air conditioning or a bathroom when I try a BBQ joint. Two features Terry Black’s happily offers along with a fraction of the wait. Can great BBQ be so convenient?

As long you order right, the answer is yes. This is Central Texas and Terry Black’s does Central Texas BBQ right. With DNA that connects them to Black’s of Lockhart and subsequent satellite locations, BBQ is literally in their blood. And here is a pro tip . . .

The Cadillac of Meat Sweats

Get that beef rib. Yes, they are pricey but damn if they aren’t a splurge to have every now and then. They will run you about $40, so you will want to adjust your brisket order properly. But if you love insanely marbled smoked beef, look no further.

You’re in Texas and so you must get brisket. Always get fatty and if you must, get a little lean too. In either case, the point is the same, that melt in your mouth burst of smoked fat and beef goodness. On a good day, Terry Black’s brisket can stand tall with almost anybody in town.

Sausage and the Texas Trinity

It has been said that the Texas Trinity of BBQ is brisket, spare rib and sausage. Terry Black’s sausage certainly justifies that claim. Their classic sausage could very well be the most snappy, well seasoned, addictive sausage that’s not charcuterie, that I have ever had. Period.

When I first went to Terry Black’s, I was disappointed with their sides. Not because they weren’t executed well but because my preference is for new school, fine dining chef takes on what would pair well with BBQ. I still am of that mentality but at the same time, these green beans and potato salad are certainly respectable. Beet salad and goat cheese ain’t for everybody after all. Besides, at the end of the day, you are here for the meat sweats.

Can you spare a rib?

I’m not mad at the spare ribs at Terry Black’s either. You can tell these are the full cut with the brisket left on. I don’t mind a little crackle in my ribs. I’ll just say this: Central Texas BBQ doesn’t make the best ribs compared to BBQ in other parts of the country. And Terry Black’s doesn’t make the best spare ribs in town, but I never regret ordering a couple bones. A beef rib it is not, for what it’s worth.

Not mad at that turkey either. In fact, I might suggest that over the spareribs if you had to choose. I’ve been saying this for a minute: a sign of a good Central Texas BBQ is if they do a good job on the turkey. If the turkey is moist and flavorful, so goes the brisket.

Great barbecue is a great thing. But what makes great barbecue great? Great people. I’m not gonna pull any punches here, I went to Terry Black’s and they hooked me up with like $100 of BBQ on the house, all before Covid-19. Is it cool to be friends with peeps in the BBQ biz? Well, yeah but it’s also cool to celebrate a spot that does a damn good job serving rock solid BBQ with less wait and at dinner time. Yup, unlike more than a few great BBQ joints in Austin, Terry Black’s is open for dinner.

. . . is more than a mouthful. In fact it is a must order if you are with a group of three or more. So get it when you get to Terry Black’s.