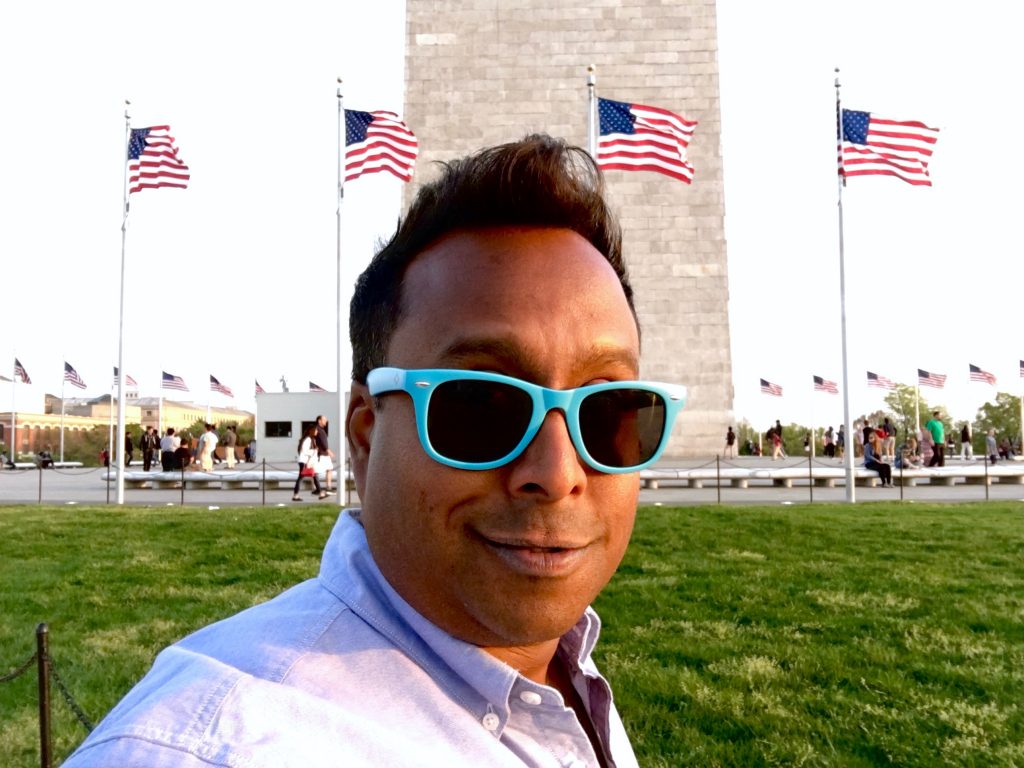 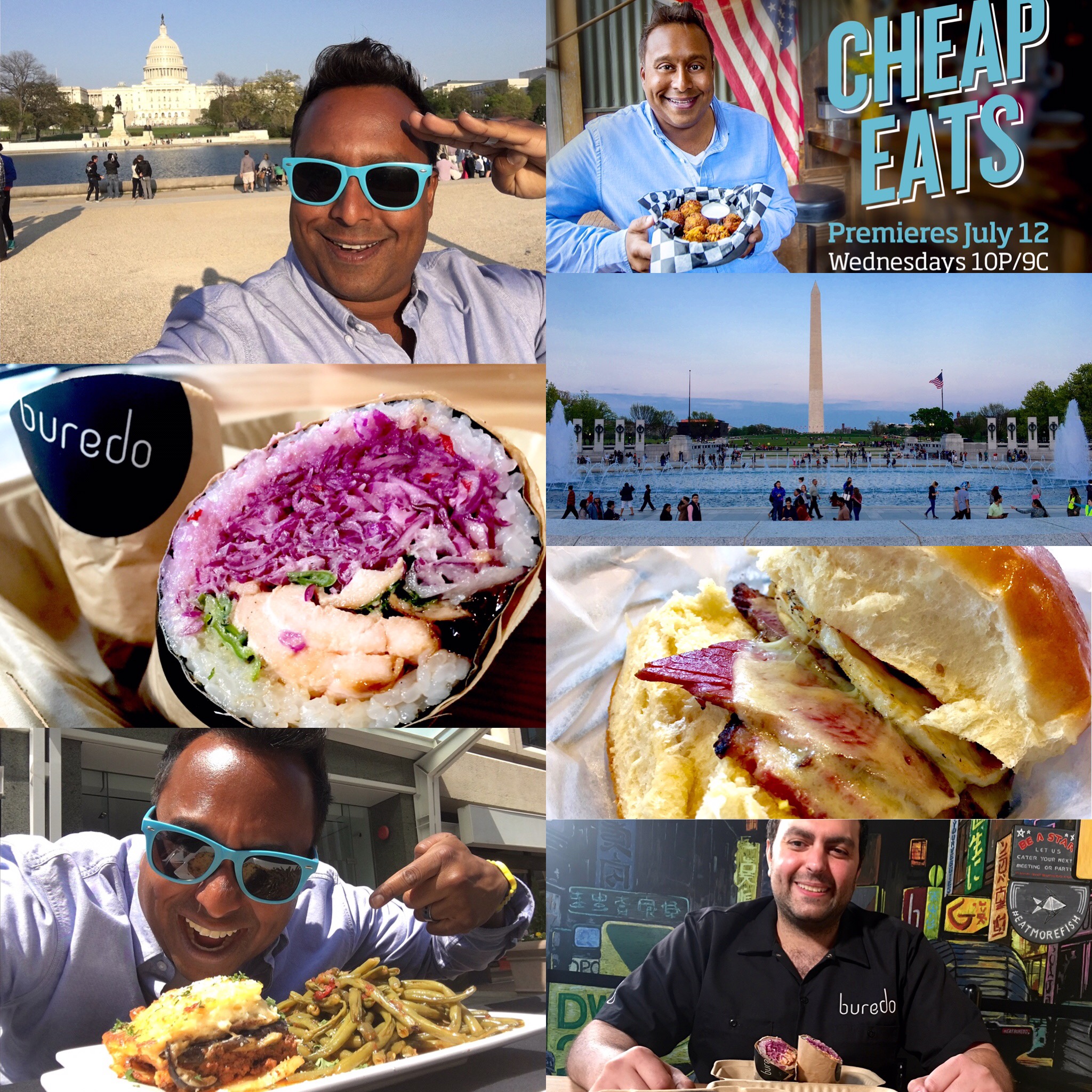 Washington D.C. – Chocolate City – City of Magnificent Intentions. Call it what you like, after Cheap Eats hit this town up, I know how it tastes: international and forward thinking. Long standing in the shadows of NYC, Washington DC has come into a culinary standing of its own, with high end cuisine drawing even New Yorkers down to the beltway. But as far as Cheap Eats goes – heck I was scared. Little know fact is that I worked on a show called $24 in 24 whose similar Cheap Eats premise had me researching the District of Columbia for affordable fare back in 2012. And frankly, I was coming up with goose eggs. Cut to 2017 and lordy DC is having a different convo with me and budget friendly grub. This town kept me plenty occupied with all kinds of Eats, Cheap and more, so let’s just dive right in!! 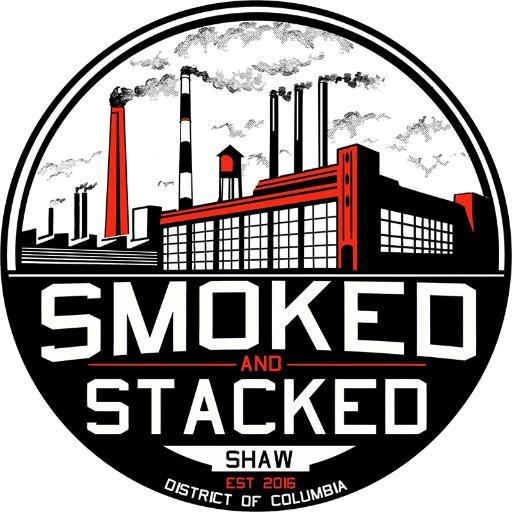 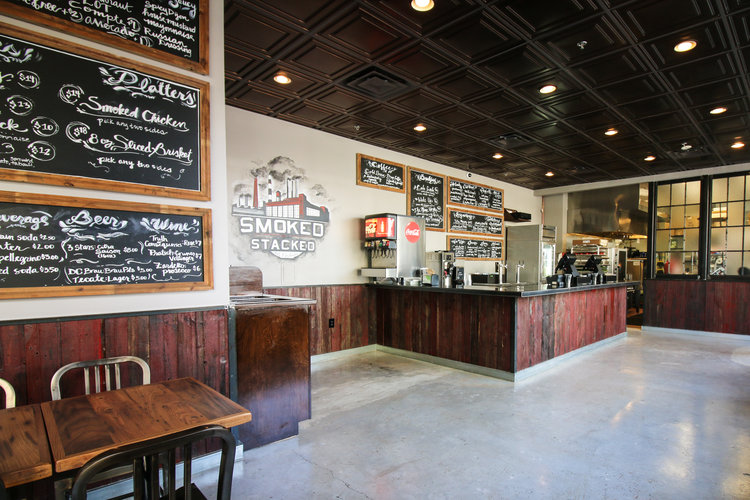 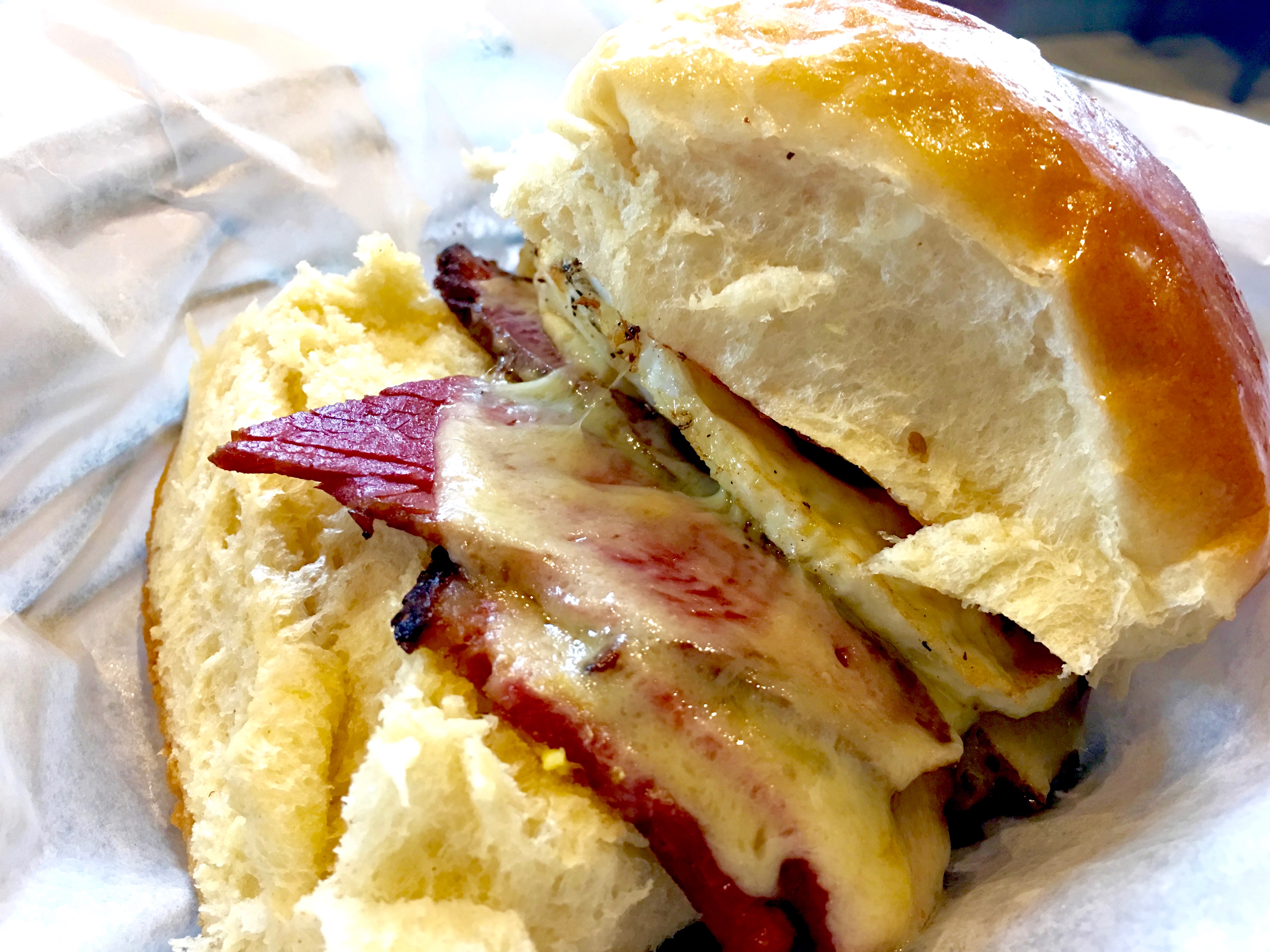 The best way for me to get into the Smoked and Stacked experience is to bring up a question posed to me during the DC Cheap Eats episode – “was it spicy?”. This was referring to the pepper jelly that is featured on the New Yorker along with Pastrami, the fried egg and the Comte cheese. Given the context of the segment where the chile featured possessed a high Scoville measurement, it was a fair question. However the answer was this: not at all. And that is the whole point of a fine dining chef making taking on comfort food: showcase range and expertise while delivering a lip smacking balanced meal. Smoked and Stacked does not offer table service but they serve food like it deserves to have a waiter up sell it along with some imported sparkling water. This is the kind of habit forming, once a week place that might hinder your plans to buy a new car but it is still a fine deal in the Cheap Eats world. The sandwich was as rich and as satisfying as breakfast between the buns gets. Chef Marjorie Meek-Bradley may not have won it all on Top Chef but she was a big reason why Cheap Eats won in DC – straight up Bang for your Breakfast Buck. 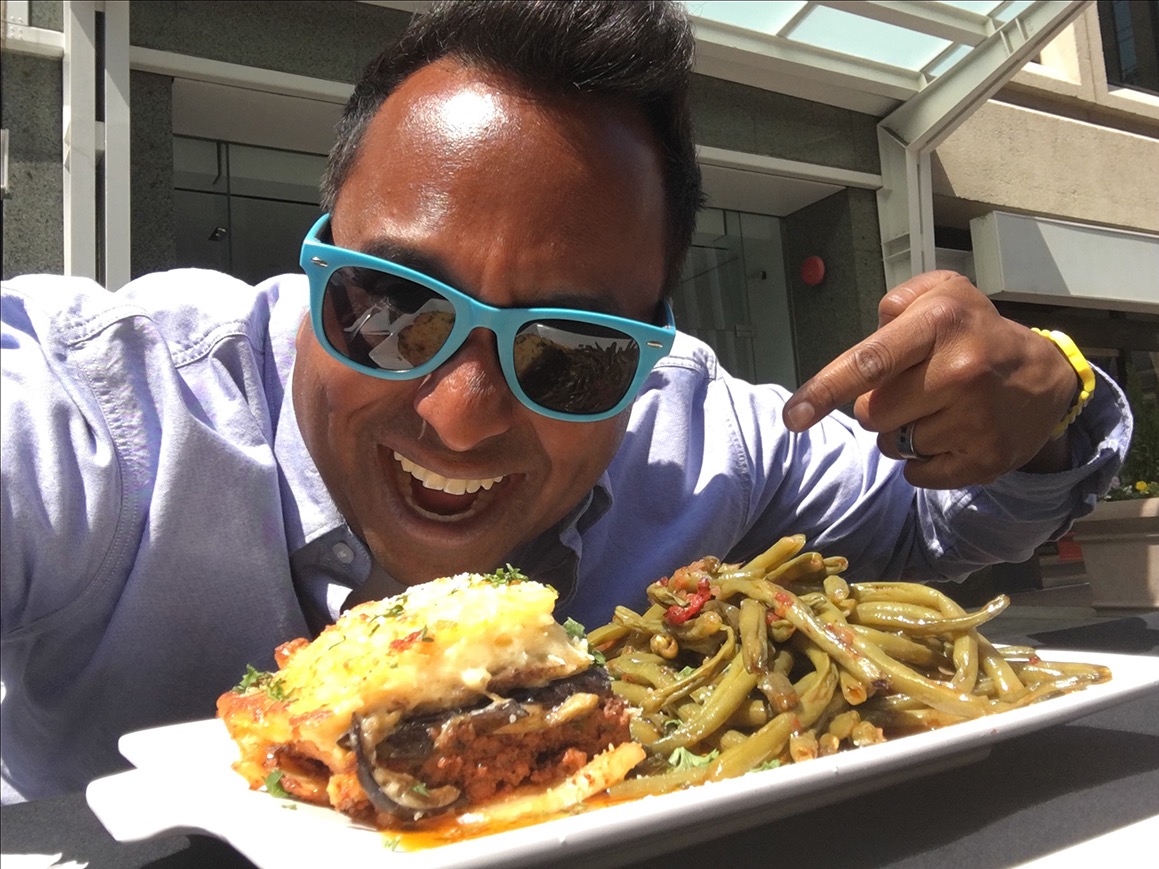 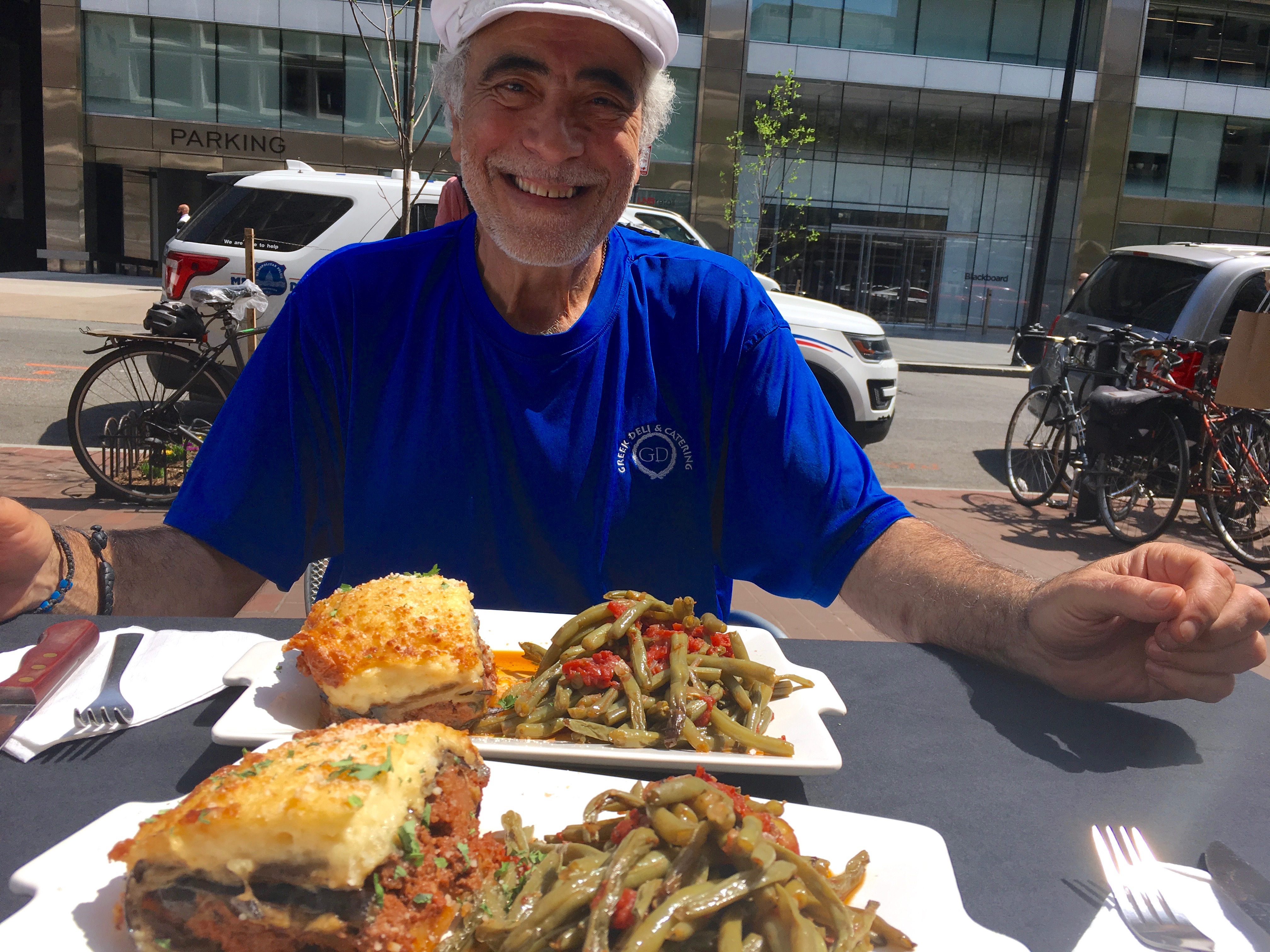 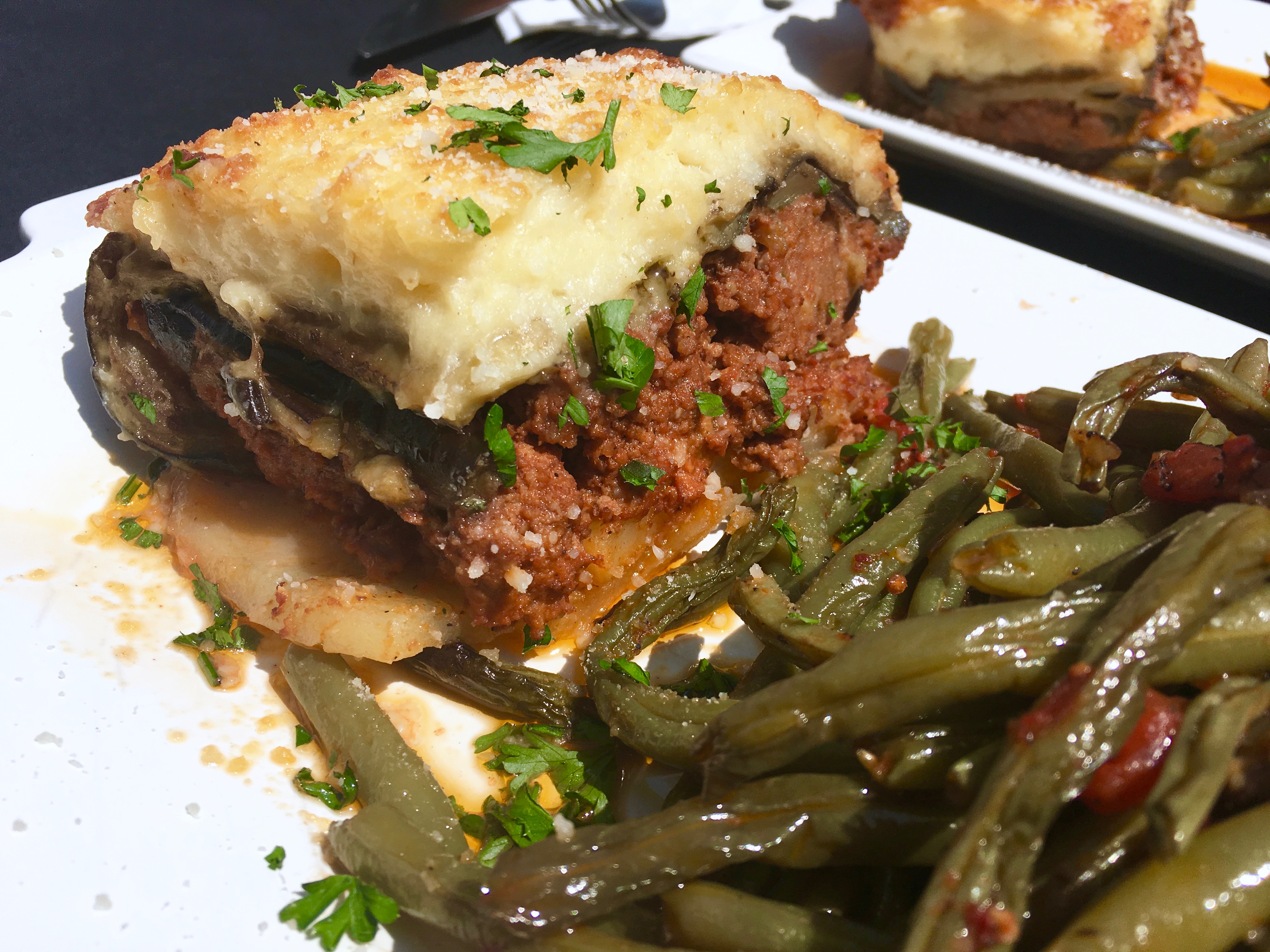 First off, Greek Deli is all about Kostas Fostieris – I mean that man alone is worth the price of admission. Kostas has a rep and for good reason: he is easily one of the most interesting people I have ever encountered in the food world or any other world for that matter. He is at once fiery yet commands an endearing paternal charm. You could say he is Washington DC’s version of the Soup Nazi but he will also have you laugh as hard as George Constanza, Elaine Benes, Kramer or even Jerry himself. As far as the Moussaka goes, it is as rich as a bechamel soaked casserole of potatoes, ground beef and eggplant sounds. It hits you like a Shepherd’s Pie, sits up like a fat piece of lasagna, but just don’t make a sound that resembles the word lasagna around Kostas, or he will have your head. If there is one lesson I learned at Greek Deli is that if something was invented by someone first, they were Greek. The other thing I learned is that food that feeds the soul comes from people with the best souls, and Kostas’ Greek Deli is certainly that. 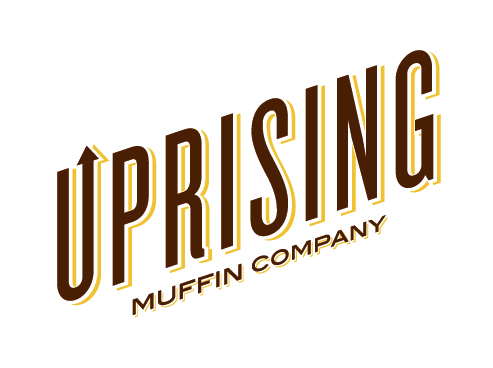 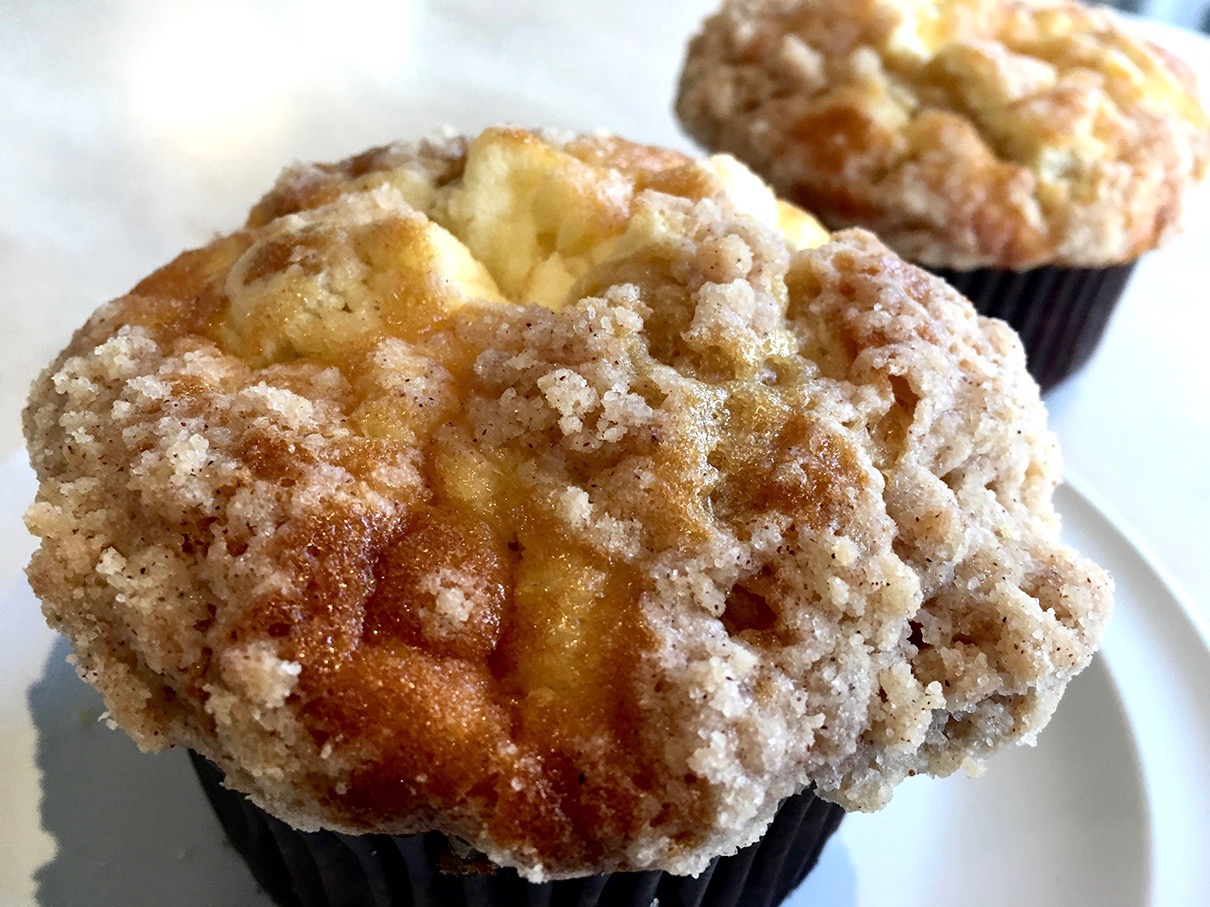 The Vitals:
the spot: Uprising Muffin 1817 7th St NW Washington DC 20001
the eats:  Cream Cheese Streusel Muffin
the bucks: $3
the full nelson:  because muffins are the next cupcakes

My official take on the snack segment of Cheap Eats is that you are essentially playing with house money. I mean to get 3 meals for $35, that are worth taking a trip for, is a big deal. Now you throw in a snack? Excessive perhaps, but you’re boy is always DOWN for a lil somethin’-somethin’ . Yet the snacks on Cheap Eats surprise me. Sometimes they are full on meals going incognito on Happy Hour menus. Sometimes they are sweet treats that may never have caught my voracious fancy but I’m glad to give my dentist reason to purchase a vacation home. And it gives me an excuse to explore food fads that otherwise I would sit back and watch. Like the whole cupcake craze. Look, I am down to eat a $5 red velvet cupcake, but not at the expense of my taco budget. Enter Uprising Muffin: a new bakery that shows yet another sign of gentrification in Washington DC, this time in the Shaw Neighborhood. I spoke with owner and muffin master Donnie Simpson about the impact Uprising Muffin and gentrification in general has had on DC and, as expected, the answer becomes a mixed bag of positives and negatives. I have seen first hand what gentrification has done to Manhattan and San Francisco: dream dining destinations and whole communities pushed out by sky rocketing rents. Yet the feel is different in DC. Given the context that the Shaw Neighborhood was the epicenter of race riots in the 1960s, it means something that an African American owned business is part of the gentrification movement. And the neighborhood is changing, becoming more diverse, and Donnie saw that as the impetus to start a coffee and bakery. A place where Gay, Black, Straight and yours truly can convene in the AM over common ground, coffee grounds and buttery rich muffins. Like a frenchmen to bread, Donnie won’t sell a muffin more than a day old so expect every treat here to taste literally right out of the oven. Eating the streusel muffin was an edible revelation because I never knew how good cream cheese could taste when its warm. But take my advice and choose your own muffin adventure. At Donnie’s prices you can easily afford to have two. 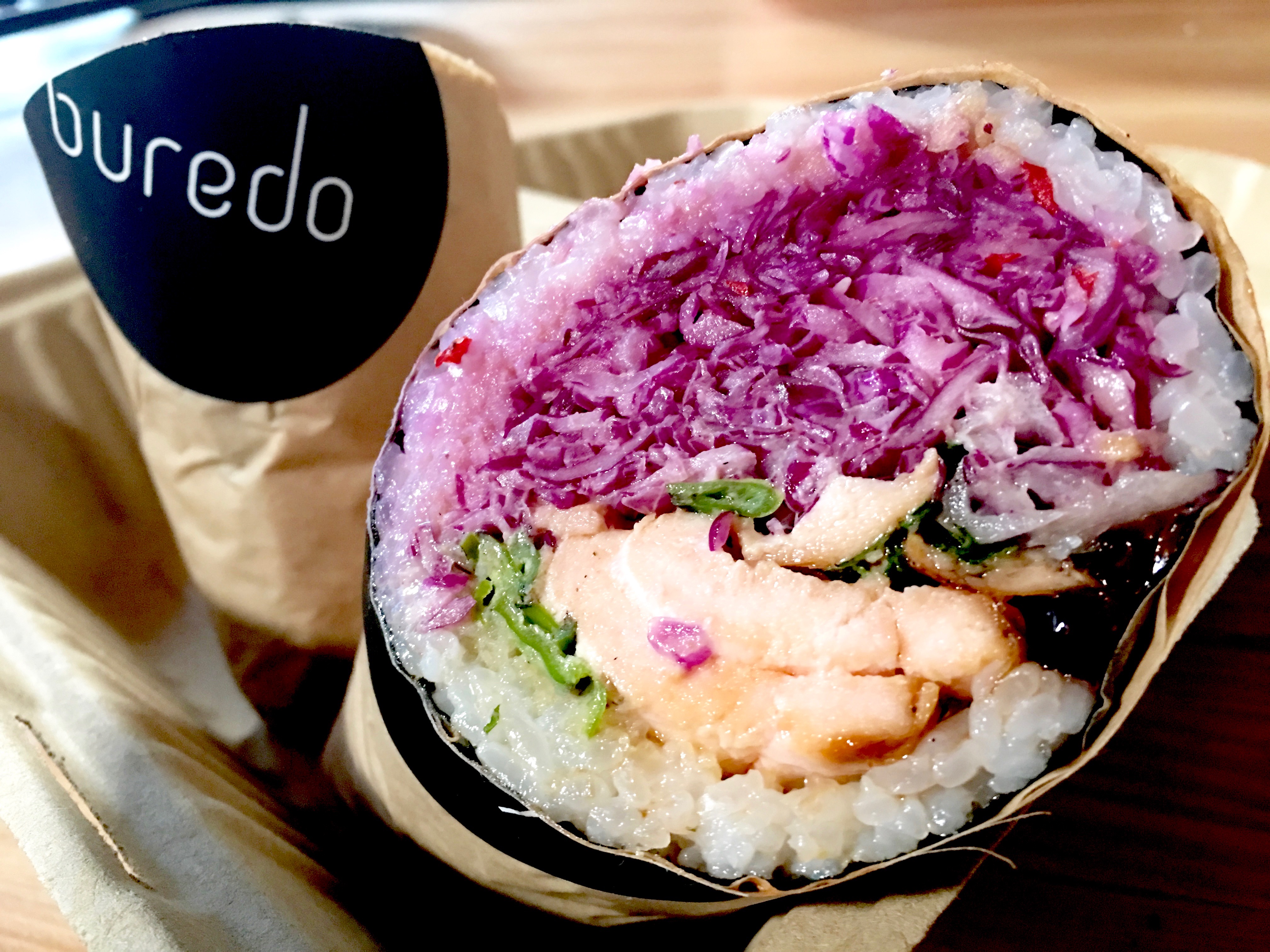 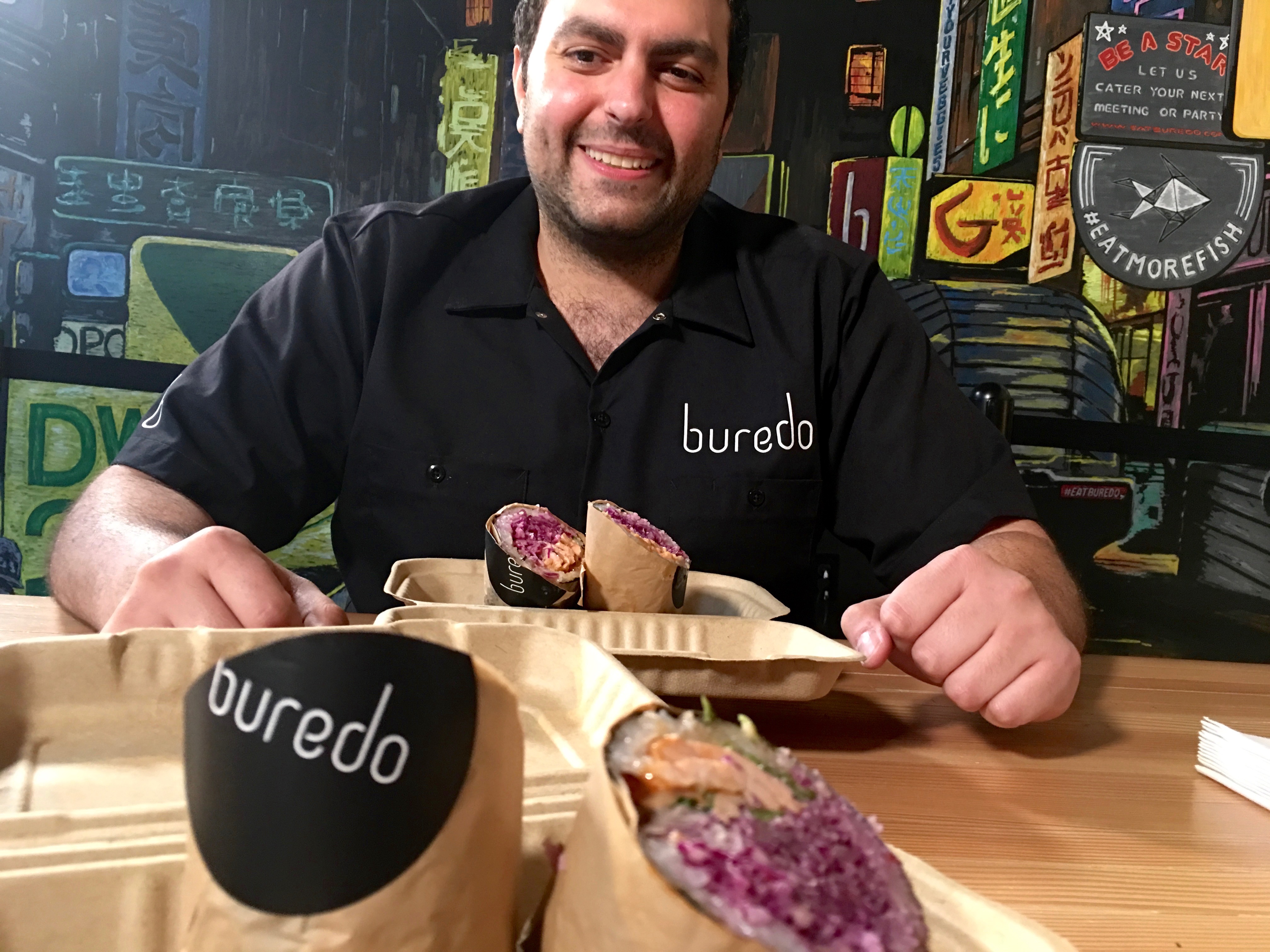 The Vitals:
the spot: Buredo 1213 Connecticut Ave NW Washington DC 20036 (multiple locations in DC Metro)
the eats:  Nikkia a “burrito” wrapped in nori(seaweed) filled with seared salmon, salmon roe, blistered shishito peppers, red onion, shiso, tempura crunch, and a creamy sesame sauce
the bucks: $11.75
the full nelson:  as sushi at it can get on a Cheap Eats budget!!

I think there was a running joke for a minute about how Cheap Eats could ever do sushi. I mean lets face it people: sushi ain’t cheap. It kinda shouldn’t be. The thought of eating raw fish is certainly off putting to some, but to think you’re getting anything but the highest quality because you are looking for a Spicy Tuna Roll Blue Plate Special, well that’s enough for even me to lose my appetite. But that’s not to say that yours truly hasn’t hit my fair share of all you can eats, Sunday Special’s and even tried my hand at making sushi(fyi it’s way harder than it looks!). It’s just that there really isn’t a substitute for a quality nigiri and sashimi experience. But rolls . . . you can get creative with rolls. In some ways I am very much a purist when it comes to food but I do have a soft spot and decent amount of real estate in my belly for sushi rolls. Inventive and cleverly filling, sushi rolls scratch the itch, fill my belly and frankly keep things in relative budget check. Still I could easily drop $20+ on a sushi roll lunch. Enter Buredo, whose clever misspelling of burrito has struck a fine balance with the soy soaked fish craving that literally is the Umami of sushi eating with a filling and affordable vessel, yeah the burro. Considered to be gut bombs by taco snobs, a good lunch time burrito can certainly cancel your dinner plans. But you change up the standard issue flour tortilla, beans rice and meat(I skip the gringo add ons like lettuce and sour cream) with seaweed, morsels of sushi grade fish, sushi rice and some creative extras and suddenly you’re talking about a hand held meal you would seek out post gym workout. Straight up I ate at Buredo multiple times while shooting Cheap Eats DC; a healthy filling and frankly innovative eating experience at these prices is a serious Cheap Eats find, I’m talking habit forming people! Mike Haddad, who is a co owner and co brain child of this fascinating fast casual concept is an awesome dude and truth be told we had a blast filming the segment here. A good friend of mine stopped by set to say hello in part to say hello and because he was a Buredo regular. Watch out Cheap Eaters, Buredo could be the next Chiptole. 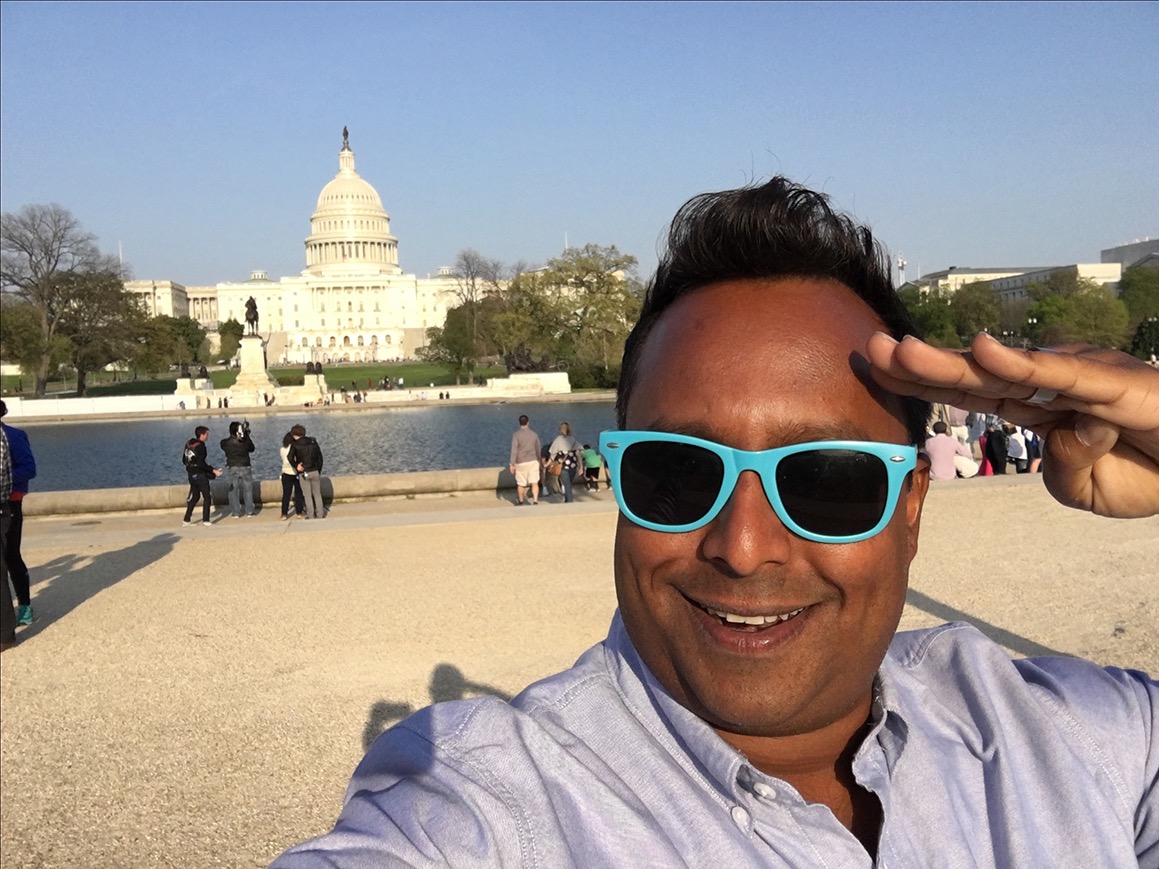 And that is a wrap for Cheap Eats DC! If you watched closely, you will have noticed that our day of Cheap Eating also navigated around any white table cloth establishments – heck we didn’t even feature restaurants with waiters! But that ain’t to say DC doesn’t have some fine dining establishments worth your hard earned bucks. So be on the look out for two upcoming posts highlighting some Bang for your White Table Cloth Dining Bucks in Washington DC that will take you all the way to the Land of river Ganges and one my of favorite steak joints of all time.