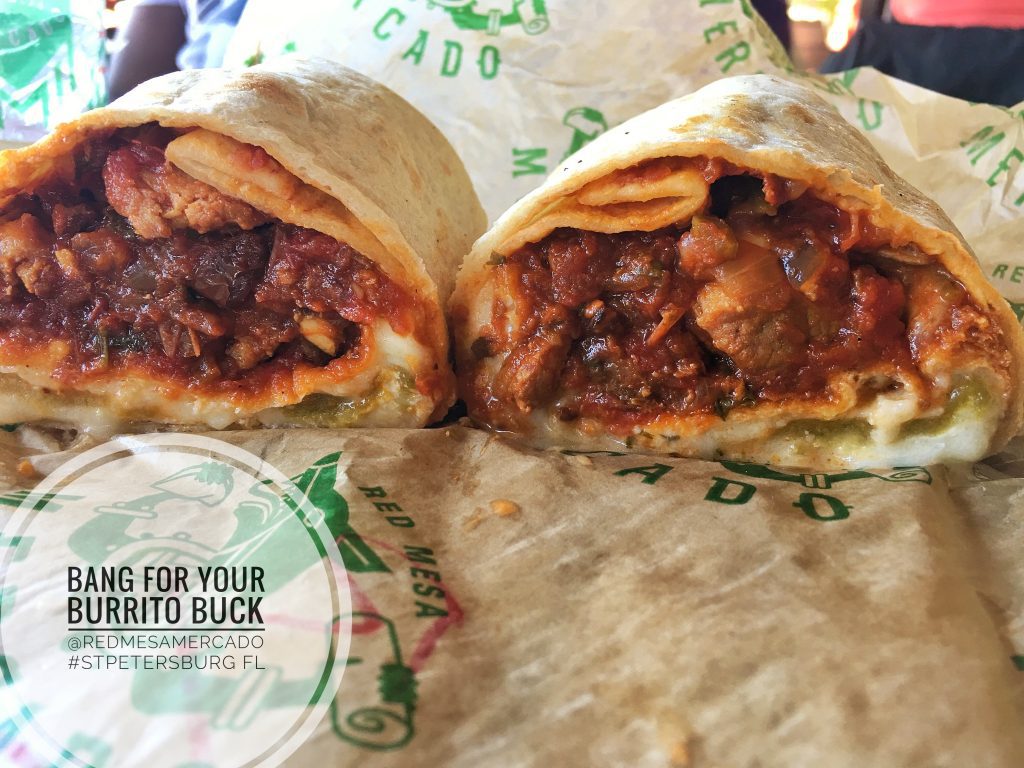 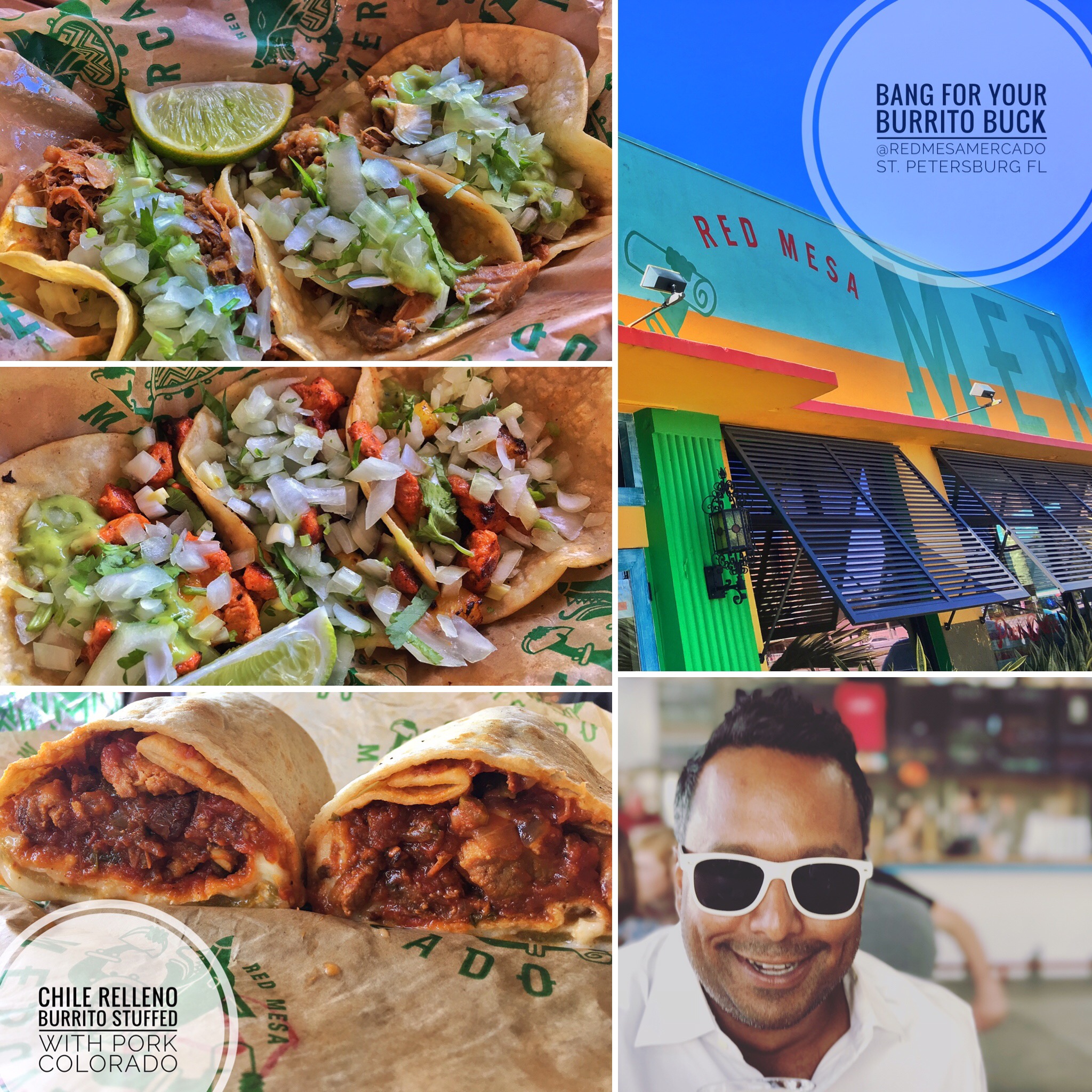 The Vitals:
the spot: Red Mesa Mercado 1100 First Ave N St. Petersburg FL 33705
the eats: Chile Relleno Burrito with Pork Colorado,
the bucks: $7.95
the full nelson: The best Bang for your Burrito Buck outside of Mexico

Considering this is my third post on the food scene in St. Petersburg FL, I think it is safe to say that I am pretty impressed with the food down there. If you saw Cheap Eats St. Petersburg, you might remember the duck confit quesadilla from Red Mesa Cantina. Well Chef Chris Fernandez makes one mean burrito too, in fact this might be one of the best burritos I have ever had . . . and that includes a burrito bender in San Francisco I went on earlier this year. It one was heck of a deal too, legit Bang for your Burrito Buck. Still you should be a little skeptical . . . bona fide burritos in Florida? Well seeing is believing so scroll down to check out Red Mesa Mercado’s contender for some Bang for your Burrito Buck! 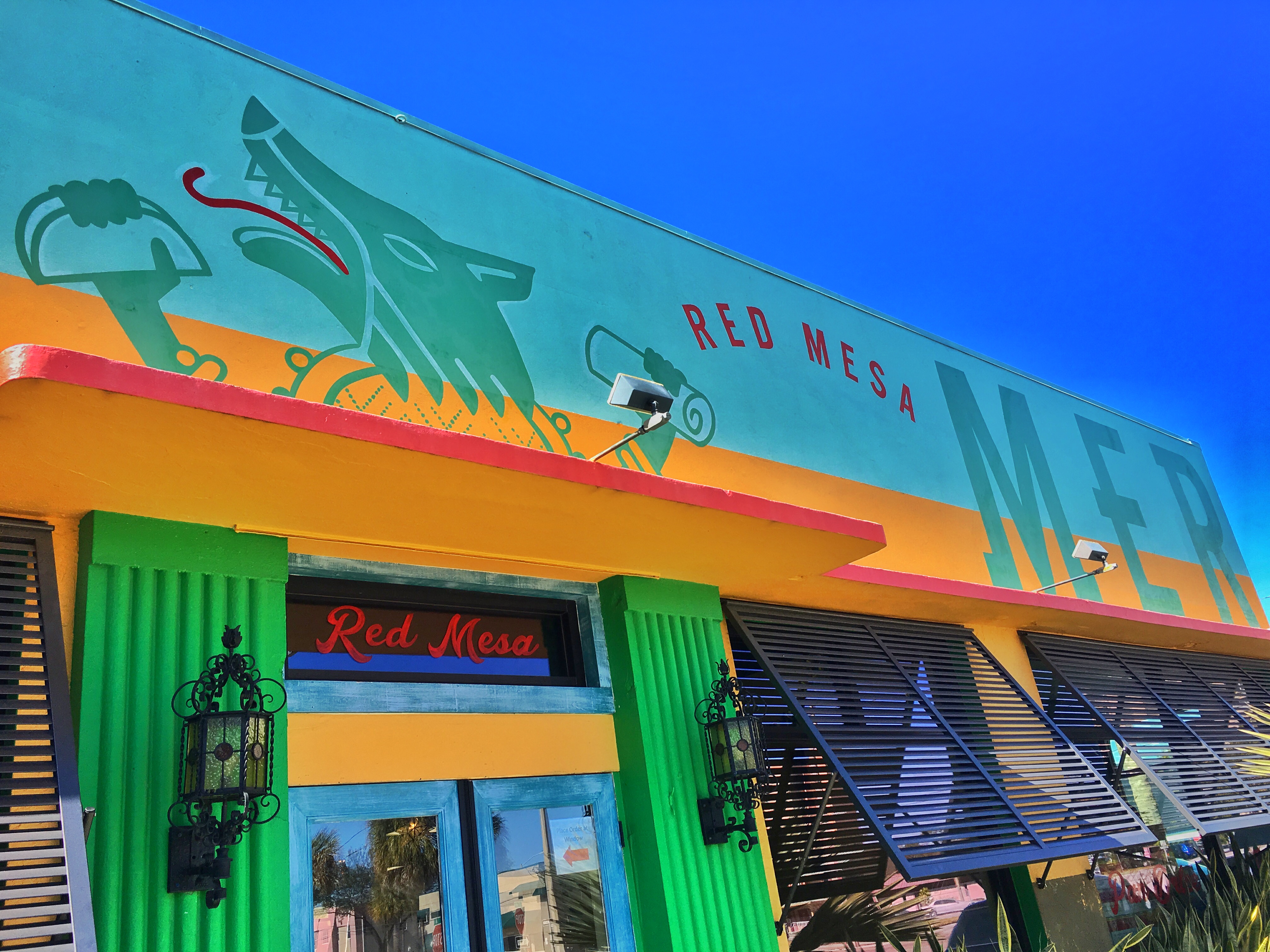 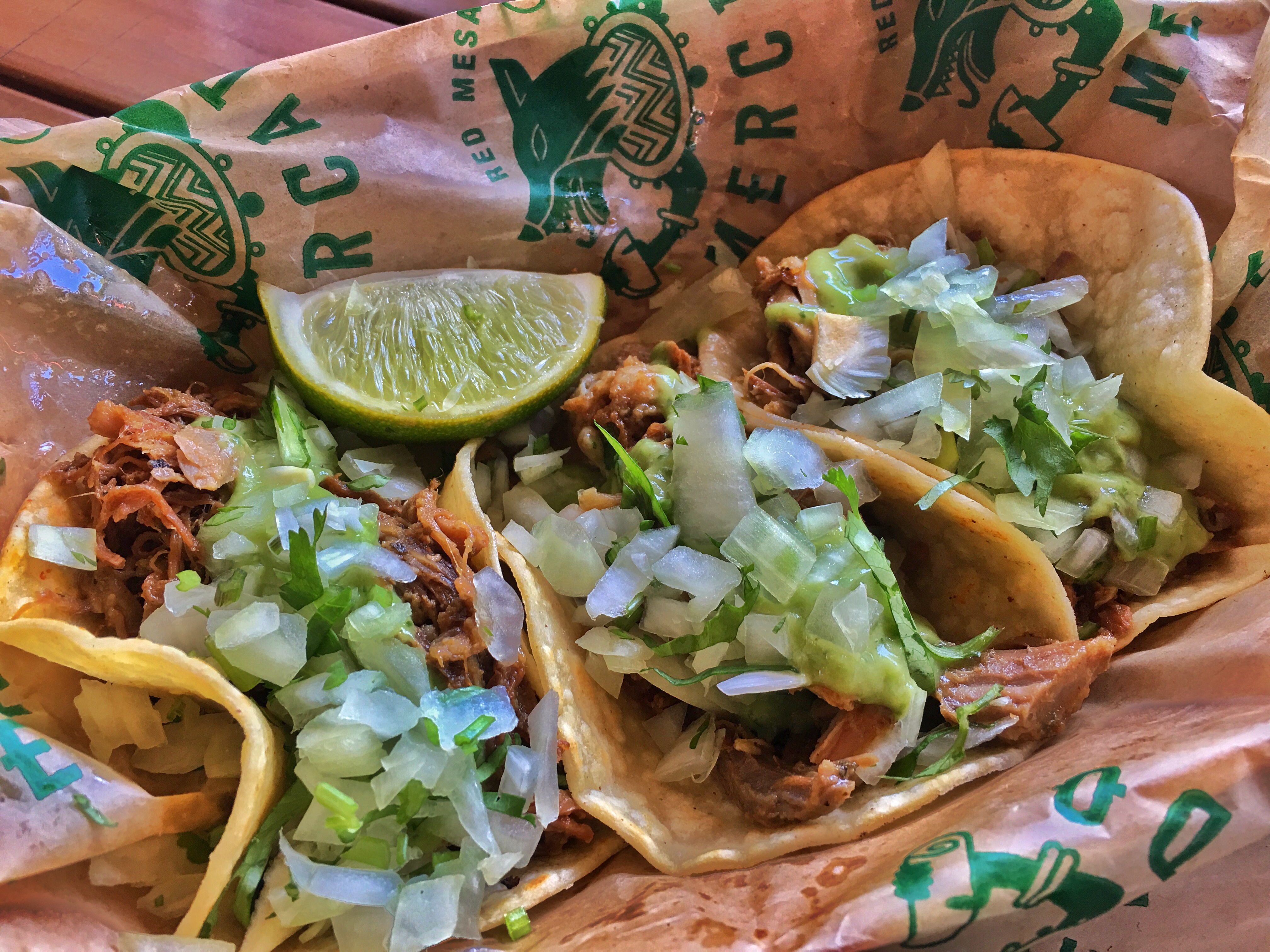 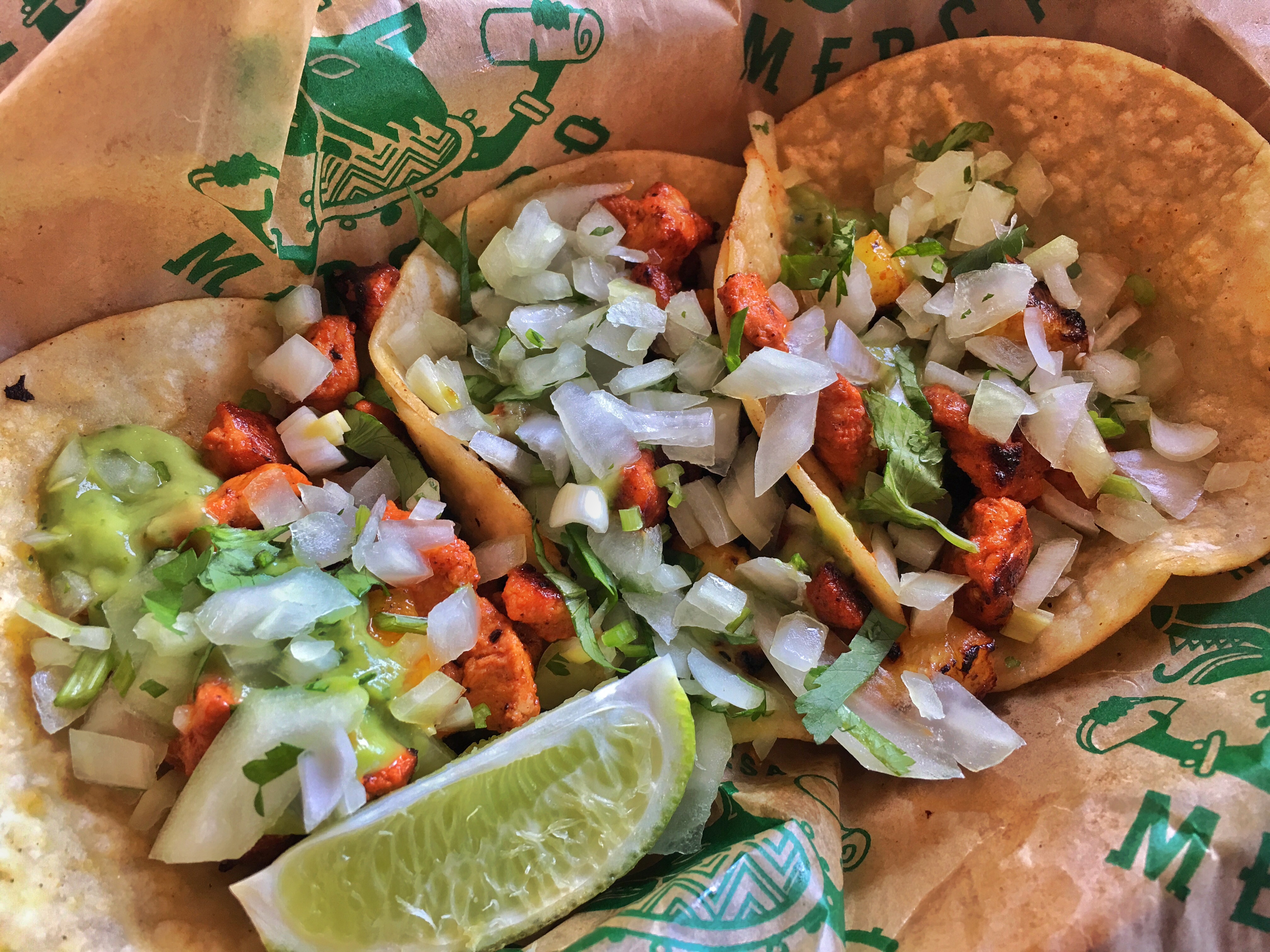 Even on a Burrito mission you gotta make a move for some tacos. Remembering that Chef Chris Fernandez makes his own tortillas for the Duck Confit Quesadilla we featured in Cheap Eats St. Petersburg, I had to see how the corn tortillas faired. Dubbed as “Street tacos”, $6.50 will get you three Carnitas or three Al Pastor tacos. At just over $2 per taco, these aren’t the cheapest tacos you can find but the corn tortillas are made in house, so there is some Bang for your Taco Buck when you factor in the labor. One order makes for a decent meal, two is a gut buster so consider one of Red Mesa Mercado’s combos if you’re looking for variety. I ended up having to bag these up because, well, I had to make room for this . . . 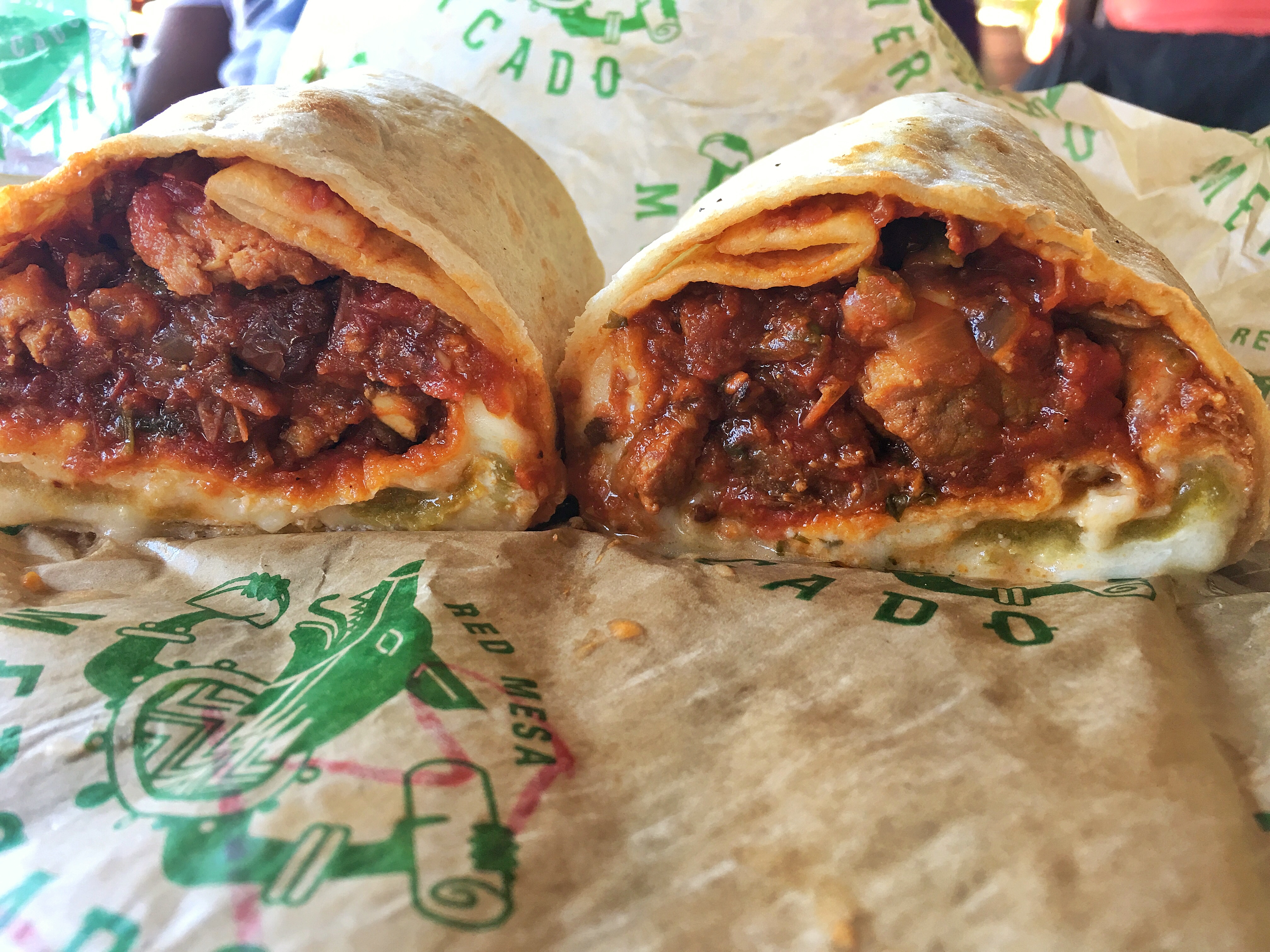 On the advice from the Chef himself, I went with the Chile Relleno burrito and I was not disappointed. Chile Relleno is one of those dishes I don’t order often enough, mostly because it’s meatless. Luckily for me, you can add meat to these burritos at Red Mesa Mercado, like ground beef, chicken or pork braised in tomatillos. I went with Pork Colorado, which is pork shoulder that’s slowly braised in chipotle peppers, roma tomatoes, onion and cumin. Yeah, it pretty much tastes as good as it sounds. What ties the whole thing together is the excellent flour tortilla which is made in house. Just like a brioche bun to a premium burger, the carbs matter and this flour tortilla would give many taquerias a run for their money. 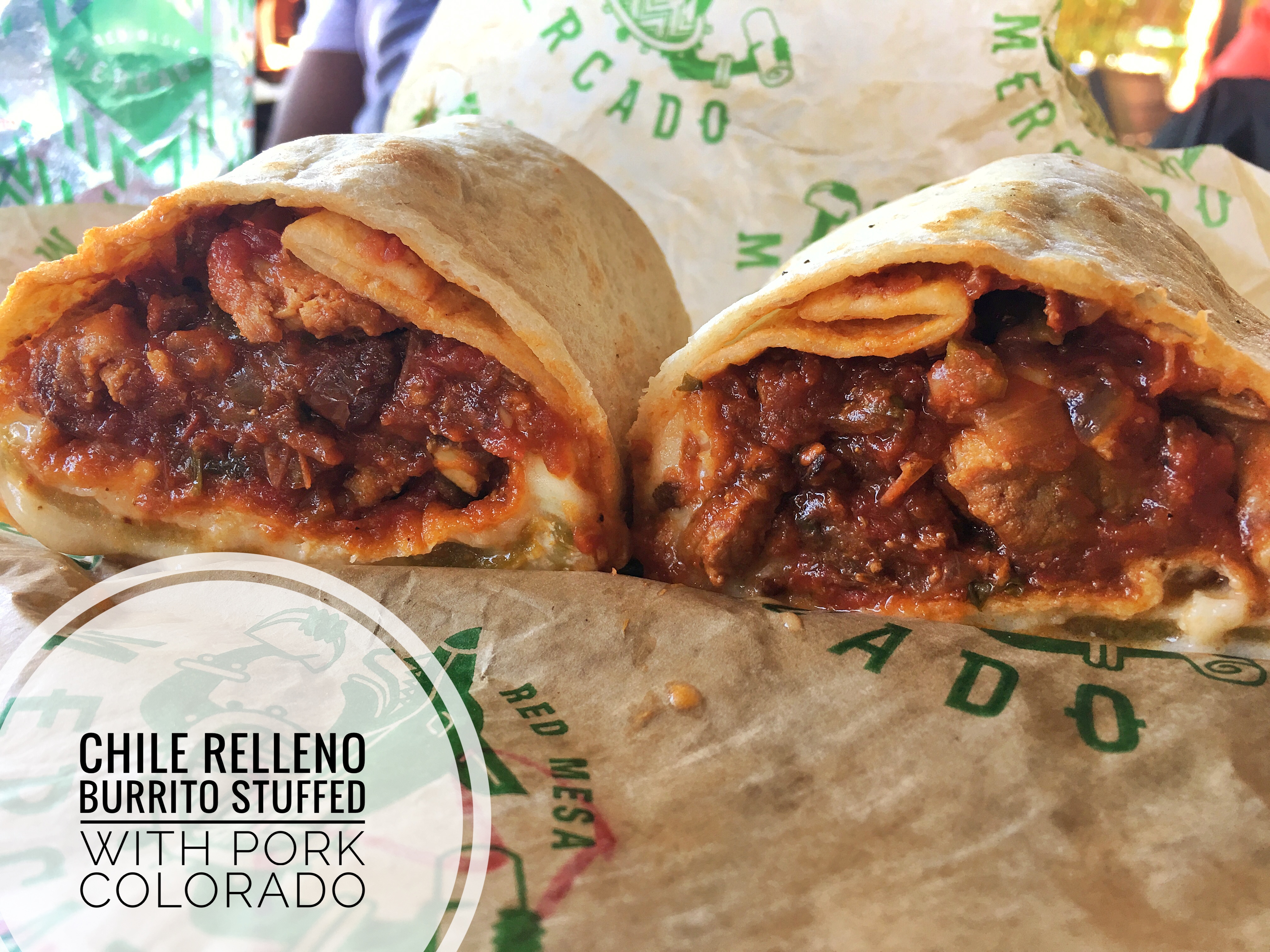 Normally I judge most Mexican joints on their tacos, but in the case of Red Mesa Mercado, the Chile Relleno Burrito with Pork Colorado is a must order. Plus, at $7.95 it is absolute Bang for your Burrito Buck. I recall a taqueria in LA called Tere’s Mexican Grill I used to hit up back in the day that made great burritos, the chile relleno in particular. I not only met its match with Red Mesa Mercado, but upped it with the addition of the Pork Colorado. The tacos are solid at Red Mesa Mercado and they do bowls too, but trust me and go with the burrito staring back you, I promise you it is as good as it looks.