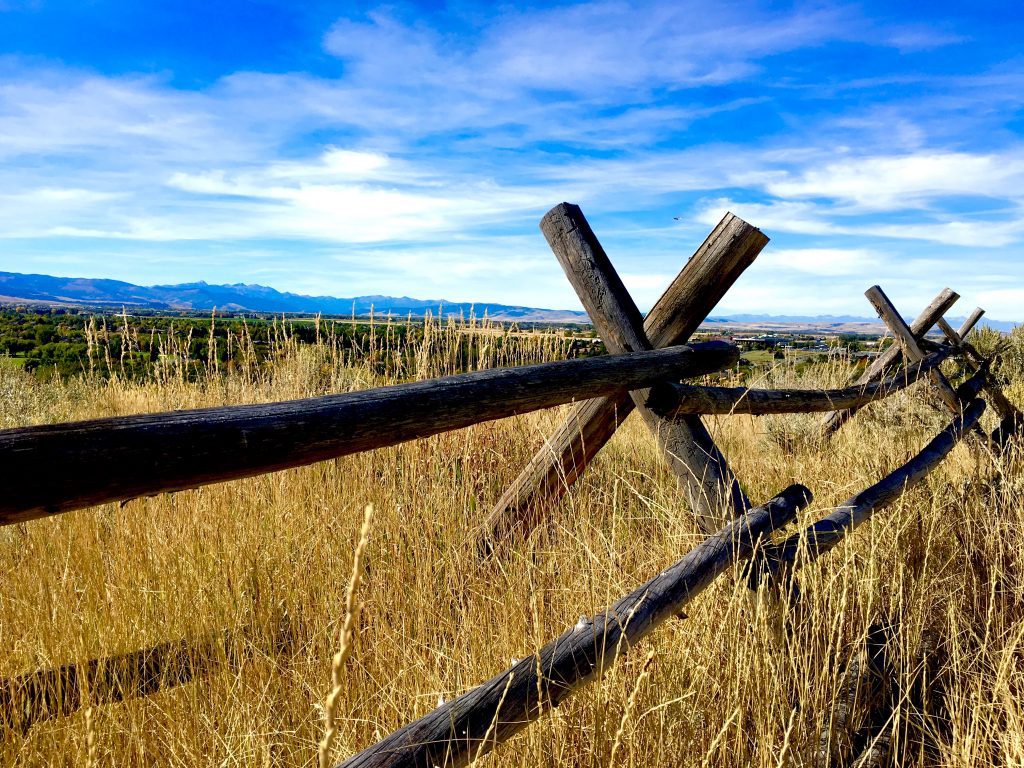 The natural beauty of Montana can transform the most novice photographer into a wannabe Ansel Adams. I might have a ways to go before I enter the realm of that iconic photographer but I will say that there was no shortage of scenic shots in my Bozeman roll, that’s for sure. Natural beauty was, is and will always be the draw to Bozeman. That being said, everybody likes to eat and our current food renaissance is finding its ways to all corners of the map. What does that mean for Cheap Eats in Bozeman? Definitely a shift in focus to locally sourced foods. Bringing food to the more far reaching parts of the world certainly poses challenges in food costs, so expect the word “local” to be featured prominently as a reflection of necessity. In my three city run in this part of the country, I consumed more than my fair share of Buffalo burgers, so we worked extra hard to showcase the bounty of exotic game in these parts with a freakin Elk burger. Bozeman is a growin’ and changing. And while that might rub some the wrong way, it will ultimately mean more dining options in this grand wilderness. And people eating better is always a good thing. This is a dining scene in the early stages of becoming an exciting and noteworthy one. My advice is to keep your eyes wide open because there are more than a few fancy steak and chophouse sized let downs. And some darn interesting food happening in breweries whose college kid heavy customer base could soon find themselves waiting in a line, shoulder to shoulder, with food obsessed hipsters, and possibly, the next Ansel Adams. 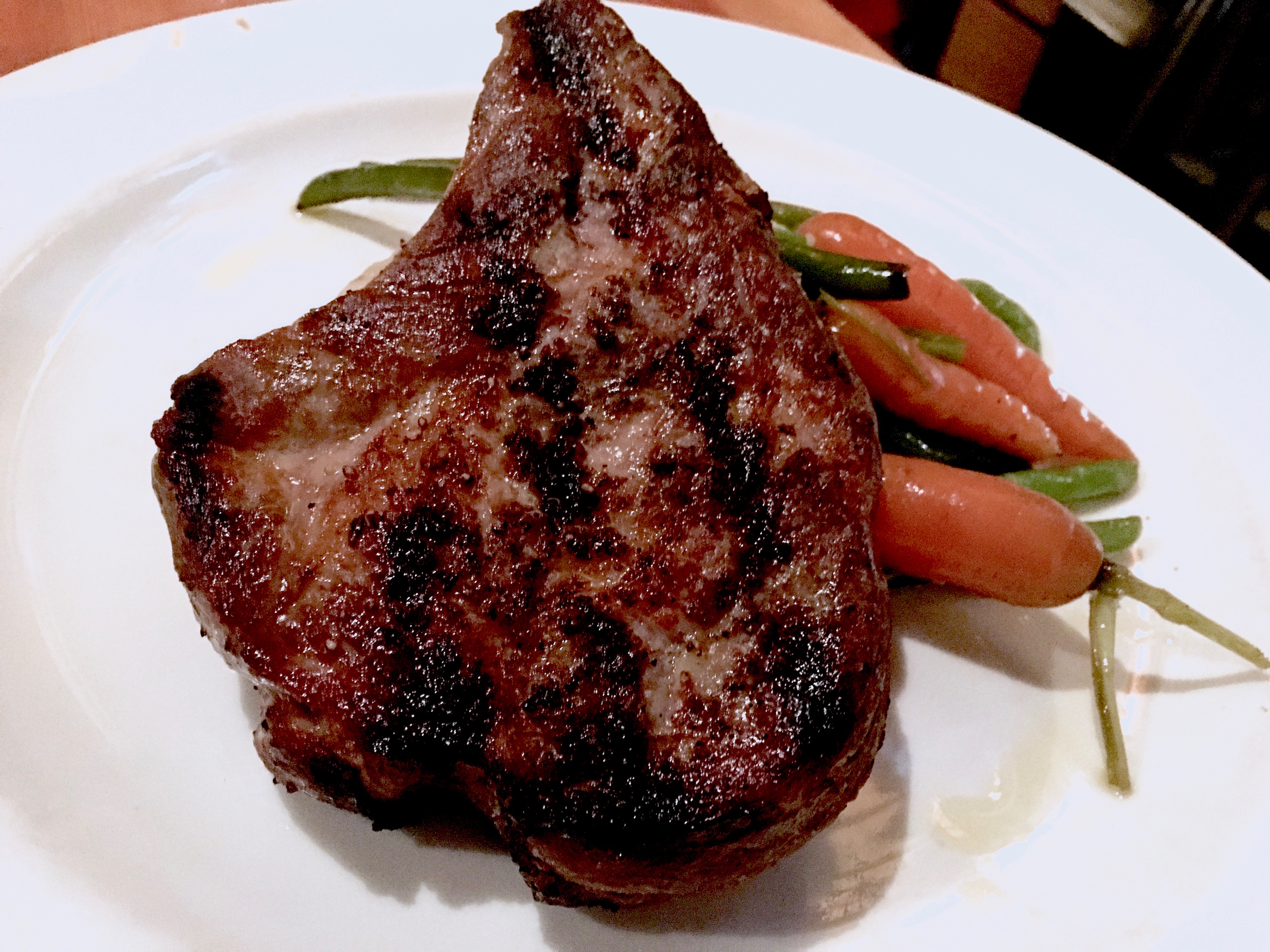 The Vitals:
the spot: Montana Ale Works  611 E. Main Street Bozeman, MT 59715
the eats: Natural Bone in Montana sourced Pork Chop, cooked sous-vide in bacon fat, garlic and fresh herbs then finished on a grill.
the bucks: $24
the full nelson:  What seems like a fratty brewery with food offers steakhouse surprises that peak with this bang for your buck Pork Chop

For sometime now, civilization has graced Mountain towns with fine dining. Upon initial reflection, this is a wondrous act: traversing to the most remote of regions and feasting on the delights of the grandest big city dining halls. But soon you find yourself wondering how anyone can vacation at such a level without featuring the word lobbyist in one’s resume. Montana Ale Works seems like a reasonable refuge from some of the more “big ticket” restaurants in town but there ain’t nothin “cheap” about a $24 entrée. I will say this: that pork chop tasted like it was $24. A big part of that was trying to pinpoint where the richness in every bite originated from: the  sous-vide cooking method or the fact that the packet was filled with bacon fat? For the uninitiated, the method of cooking sous-vide entails cooking food in a vacuum sealed bag that is immersed in heated water. The result is an evenly cooked food without comparison, retaining maximum moisture. Unlike beef, pork has a smaller range of desirable final cooking temperatures, so this precise cooking process is as welcomed as the overcooked pork chop from the Sunday supper’s of yesteryear is unwelcome. Suddenly that $24 doesn’t sound so unreasonable does it? I tip my cap to the locally sourced pork as well. Customers should take the same pride that chef’s do in finding foods that are truly worth bragging about on the menu. But mostly I was happy to eat something that truly felt like a proper big city dinner, with a fork and knife, in the land of premium/exotic burgers and craft beer. You certainly could get away with spending less, or more, at Montana Ale Works, but you would be missing out one of the better pork chops I have ever had. 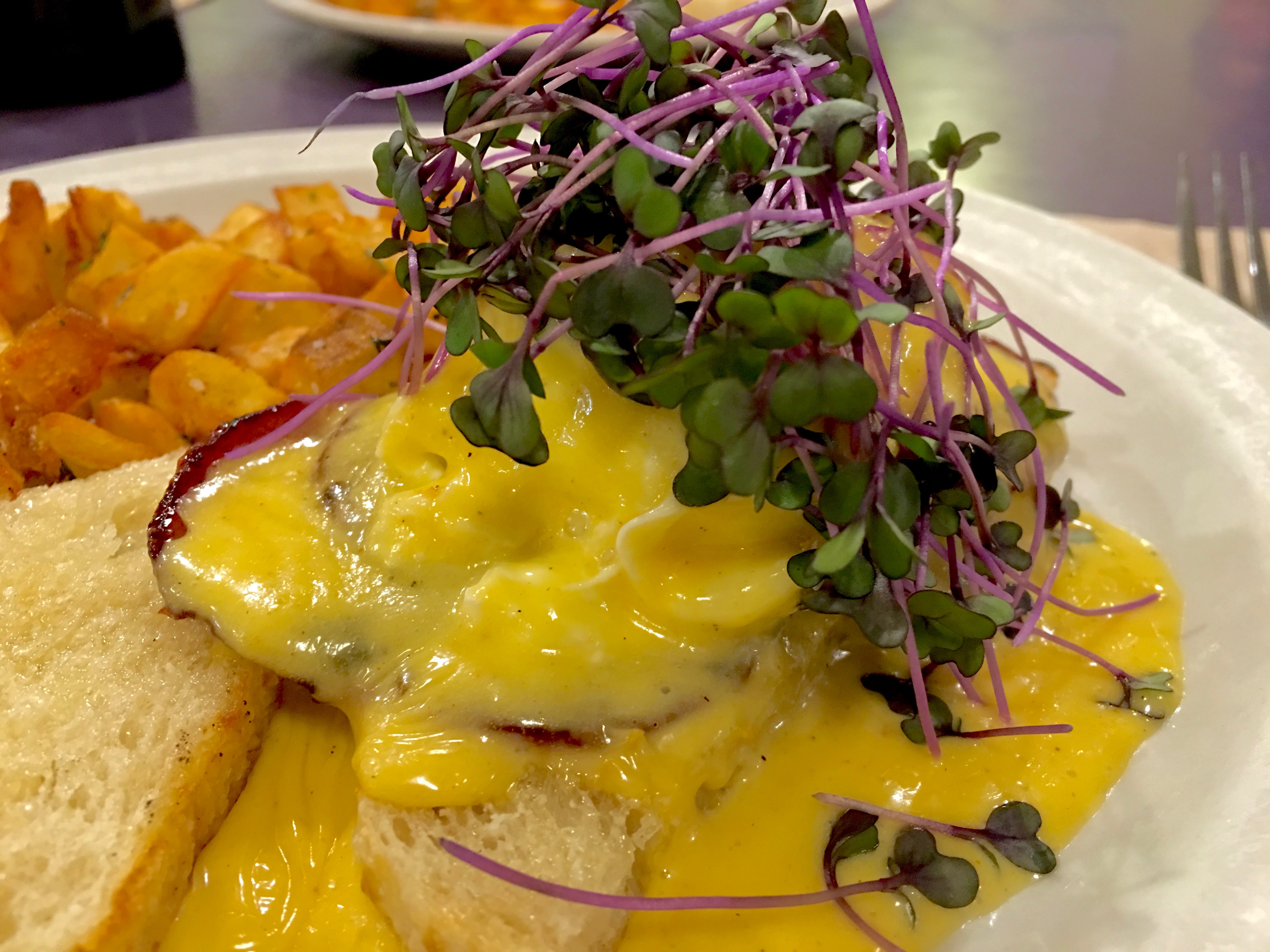 Nova Cafe just does it right. The food is turned up just enough to keep a diehard loyal customer base. This cafe bustles and it is word of mouth that keeps Nova packed. The interior is inviting to slightly funky but the overall effect is as casual and as approachable a place as you could imagine. College kids and young families abound but don’t think for a second that the hollandaise this kitchen churns out won’t turn the heads of even the most frequent of diners. Elements of that healthy Mountain lifestyle trickle onto the menu with options like gluten free this and locally sourced that. But these guys have fun too. Anybody who serves up a dish called “biscuits and gravy for players” is clearly having fun in my book and furthers the case for why you should eat there. I settled on the Locavore Benedict because Summer Sausage was a long forgotten breakfast meat treat of my Midwestern youth. It is certainly worth a try for sake of variety and the pungent bite of cased meat pairs very well with the lemony hollandaise. 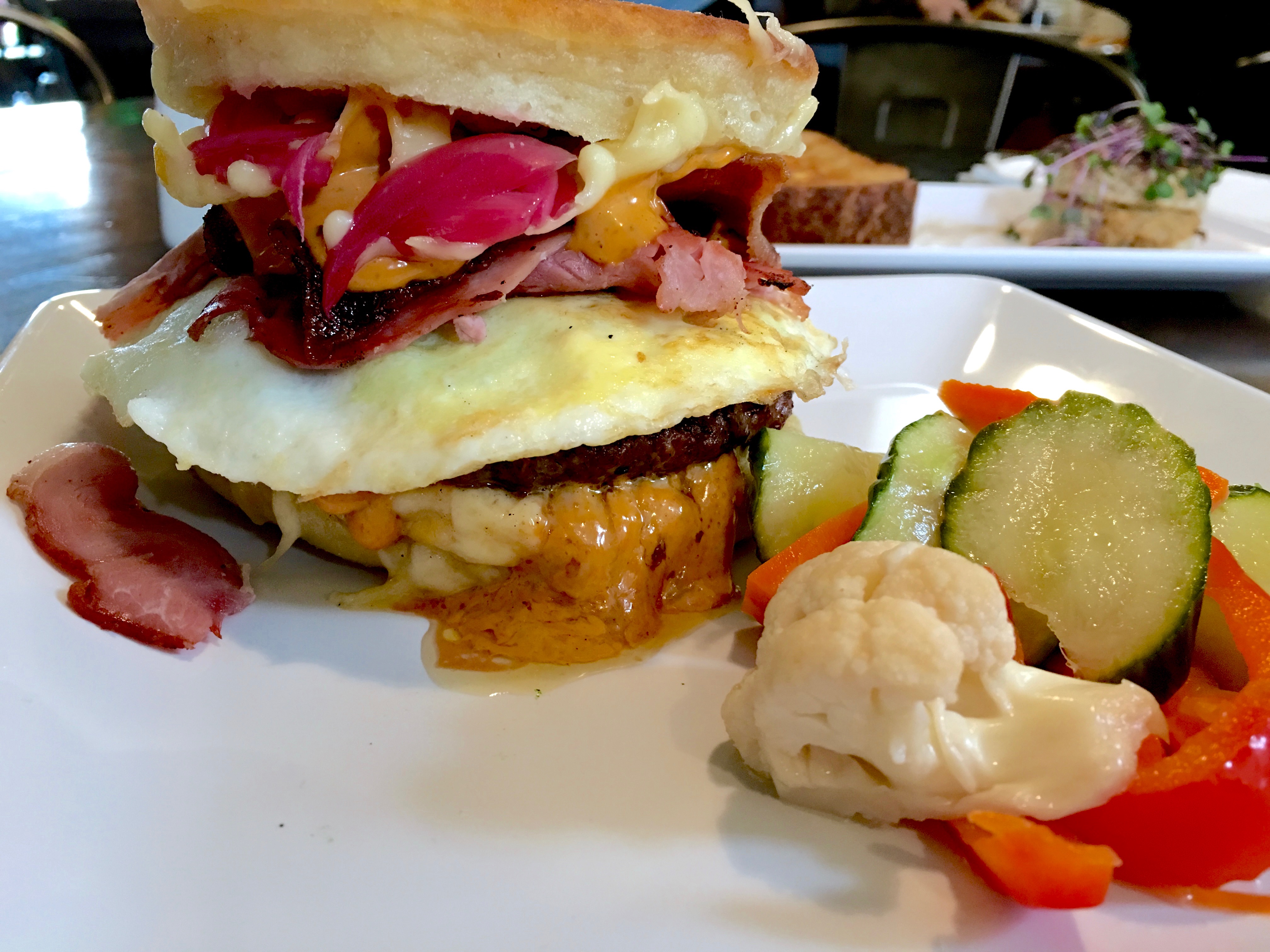 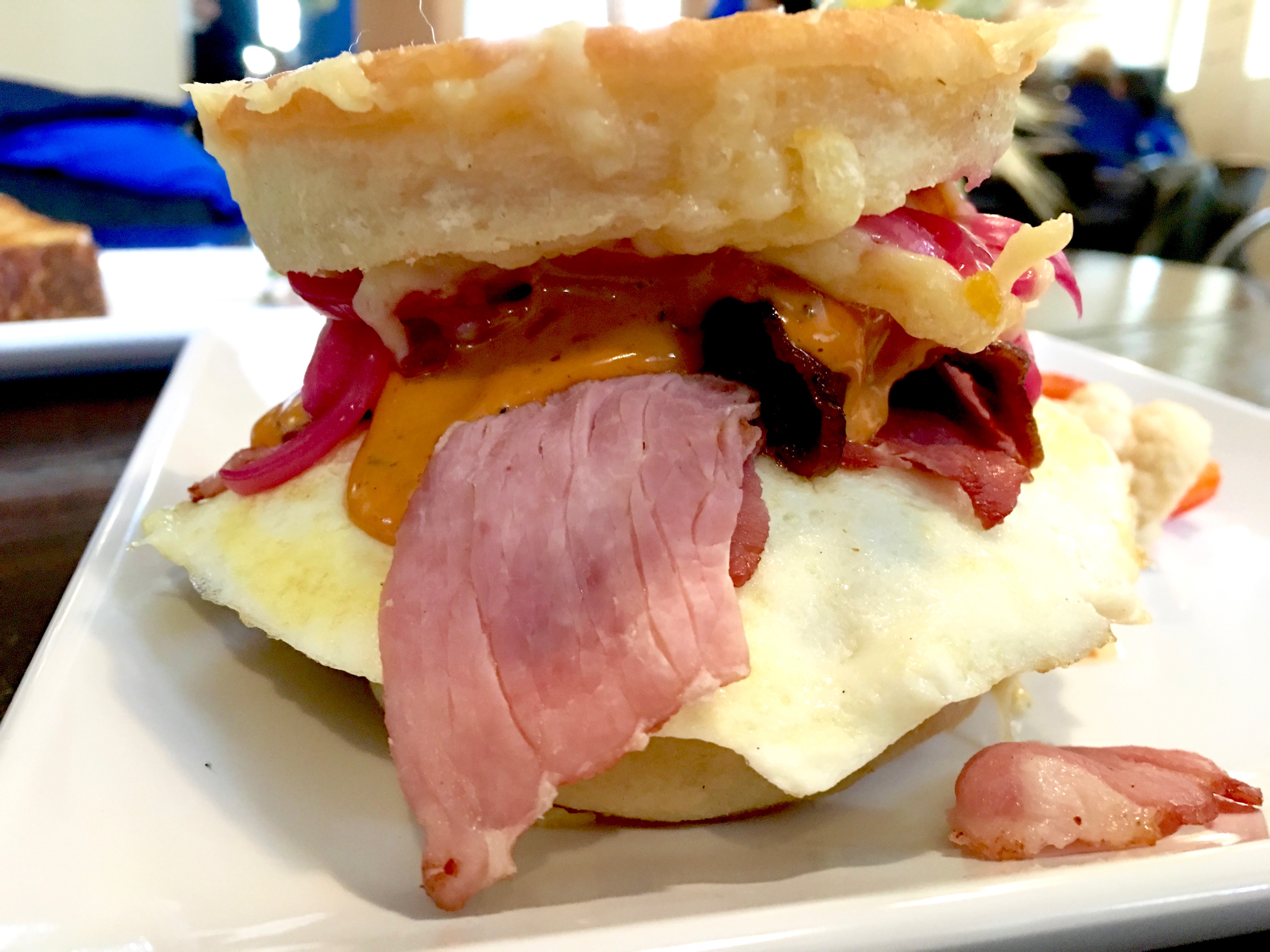 If there are two things I balk at when it comes to burgers, its burger prices in the teens and multiple meat toppings. The Piled High Elk Burger at Feed Cafe is a noteworthy exception. First off, I ain’t never had no elk burger so my rules just don’t apply. Nor should they because elk, like deer or buffalo is considerably leaner and benefits from the rich add ons of ham and bacon. They are also smartly compiled from a flavor standpoint. The addition of the bacon and ham adds a double hit of smoky porcine depth to a meat one could consider tasting gamey. A fried egg at first glance seems to be an act of gluttony but the yolk makes for a rich secondary sauce that gets along rather well with the Harissa aioli. But the biggest game changer could be the homemade English muffin. Burgers on English muffins have their fans – Im kinda in the middle on the subject but this is no average English muffin. Considerably larger in surface area and as giving as a fresh out of the oven biscuit, the Piled High Elk Burger is a must try if you dig burgers on English Muffins. Thirteen dollars and fifty cents for a burger is enough sticker shock to last well into the drive home after the meal but the Piled High Burger offers way too many firsts; from the homemade English muffin to a meaty remix of cured pork and elk and finally a duet of Harissa aioli and rich egg yolk. That’s enough food for thought to take you into your next meal. 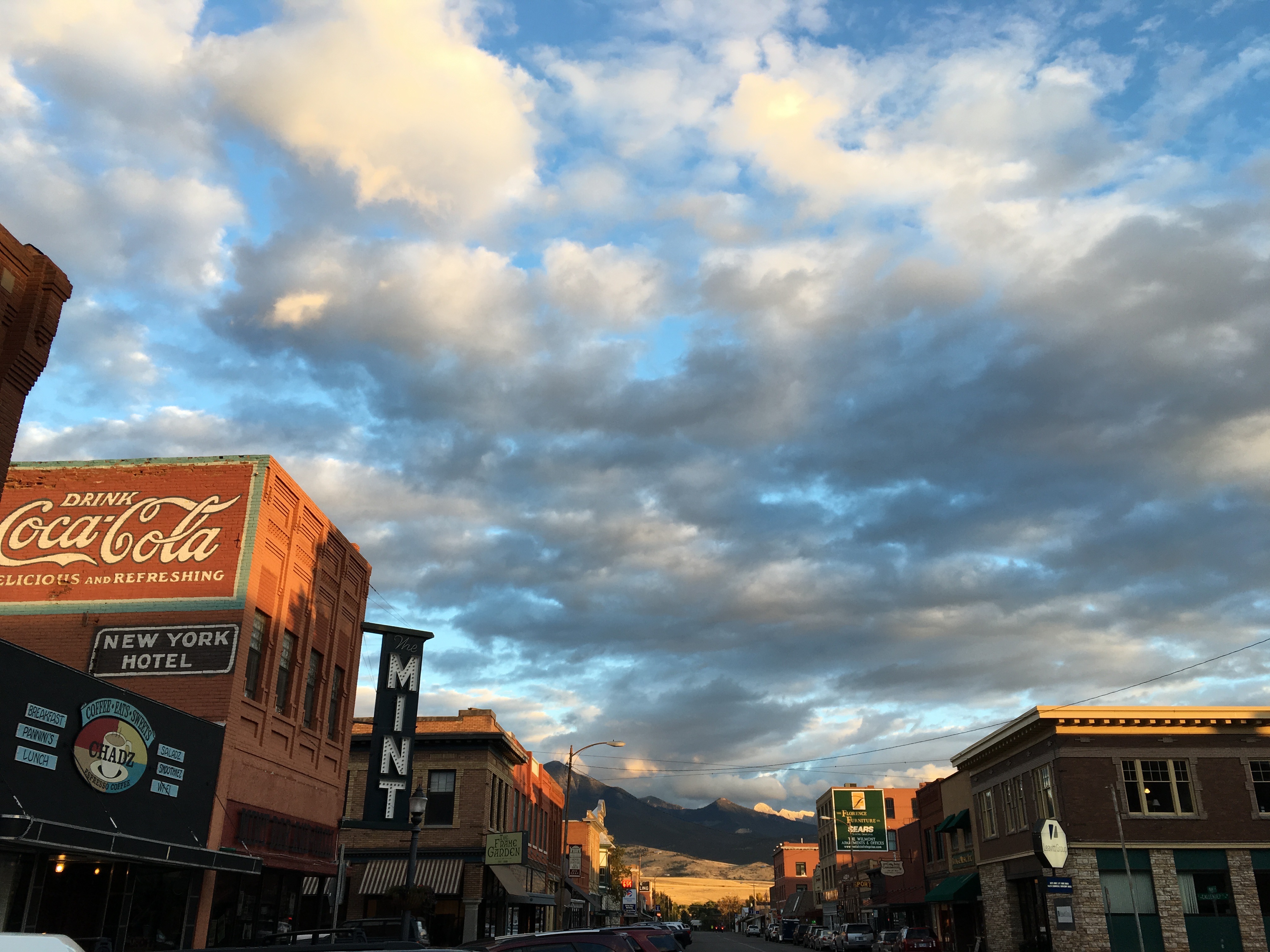 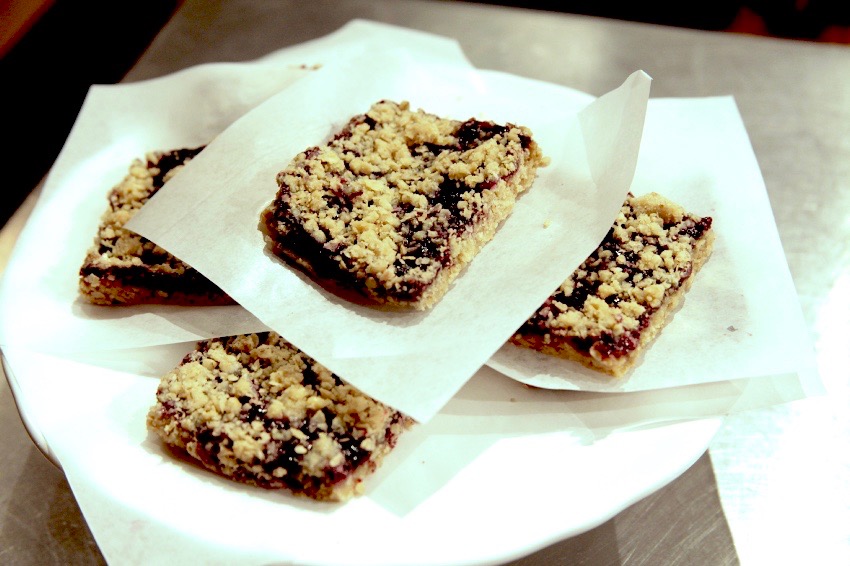 The Vitals:
the spot:  Mustang Fresh Food and Catering 112 N. Main Street Livingston, MT 59047
the eats:  Huckleberry Bar
the bucks: $2
the full nelson: Look, if it’s good enough for Martha Stewart and the President of the United States . . .

Walking into Mustang Fresh Food and Catering is like walking into a candy store if you love food. Like the lengthy name implies, Mustang does its fair share of gourmet catering, which is a boon if you live in this gorgeous but even more remote area of Montana(Livingston is 30 minutes east of Bozeman). Being such a draw apparently has drawn the notice of stars: Jeff Bridges is a fan along with Martha Stewart and Barack Obama. Essentially similar to a cereal bar, these made from scratch healthy treats feature huckleberries: a fruit native to the region. Apparently a favorite among bears(so watch out when picking them in the wild) the flavor profile sits somewhere in between blackberries and blueberries, not quite as tart as the former and far more interesting than the latter. I do rub my chin when I think that the leader of the free world could get down with a $2 snack. I guess Us Weekly is right: stars are just like us. 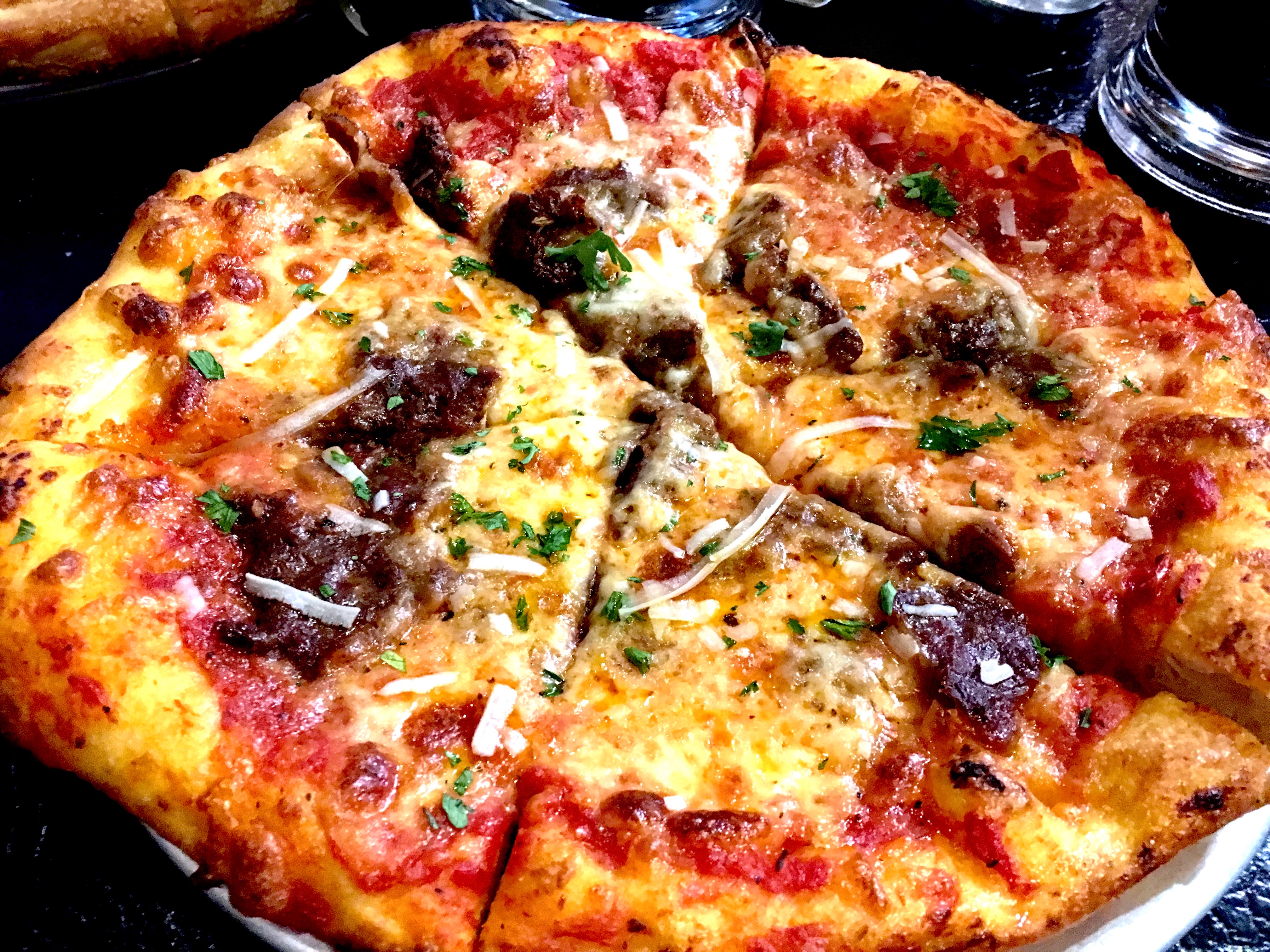 When I think of how brilliant college goes with pizza and beer, I wonder how anyone could be gluten free during the years of 18 and 22. But I do understand how someone could thumb their nose at pepperoni. I mean, it’s essentially mass produced salami. Rarely do you spot it outside of the pizza medium and if through some unfortunate series of incidents one does see it on a charcuterie platter, then one has clearly gone to a place that serves a pedestrian charcuterie platter. Look, I have had some noteworthy exceptions to the pepperoni experience but I will say in general that there is always room for improvement. Enter Bridger Brewing, a genius fusion of friends, pizza and beer, set so smartly on the campus of Montana State University. While filming Cheap Eats, I had the unique pleasure of making pepperoni at Bridger for the dinner segment. But this wasn’t your pedestrian pork pepperoni my friends. This was Bison pepperoni with some pork added in for fat and flavor. The result was a distinctive “cured” sausage experience, and as one would expect, unlike any pepperoni pizza you have had before. It almost resembled shawerma but delivered in a vessel of pizza. Still it is something familiar enough for any 19 year old to chow down on, years before the thought of a gluten free lifestyle would or should, sink in. 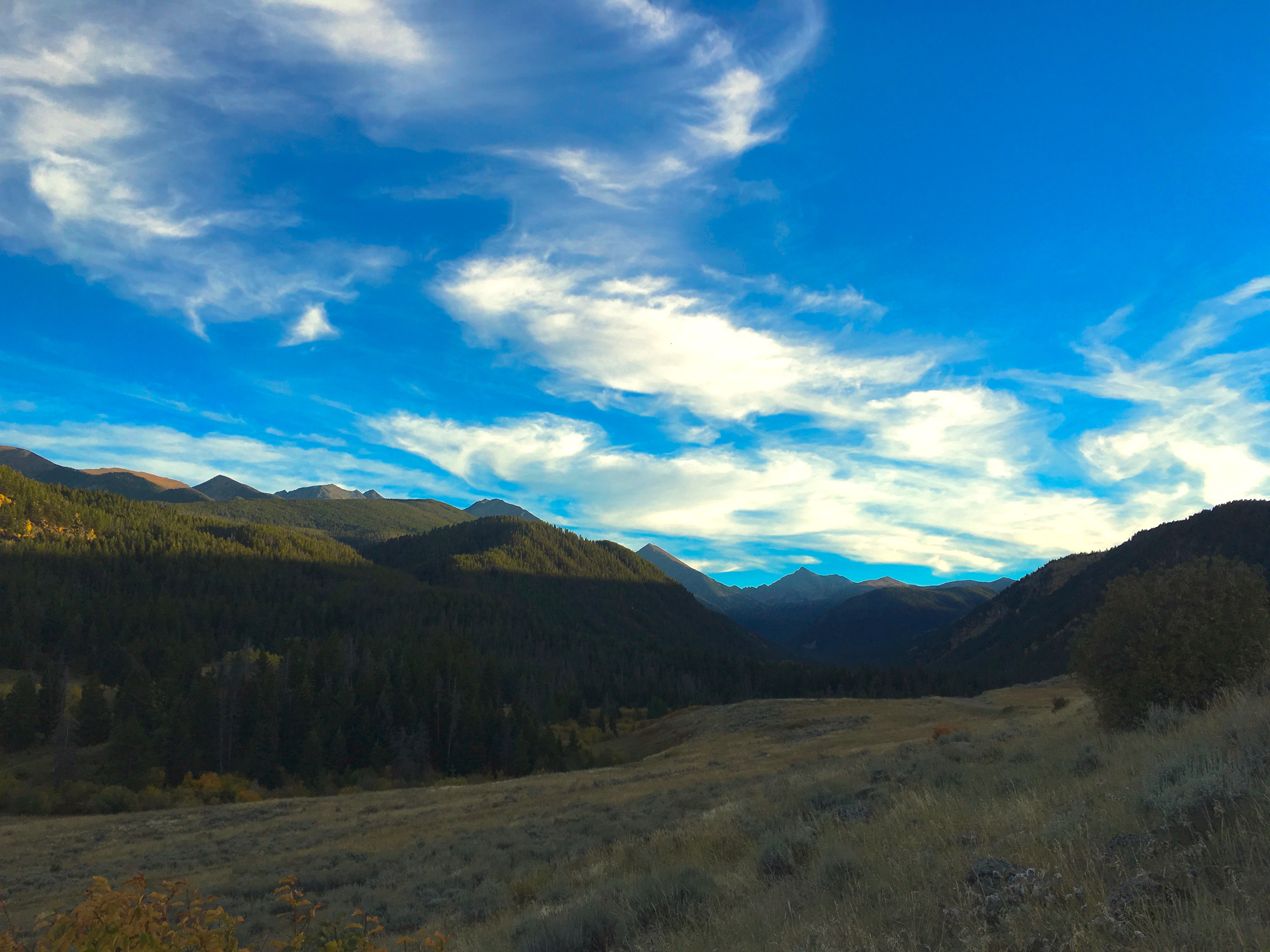 They call Montana Big Sky country for a reason. And as I said, this is the real draw here. But the food is catching up and as our food revolution evolves, so will the dining scene in Bozeman. My hope is that the food continues to reflect the land and the lifestyle here. That local foods stay the focus and the exotic bounty this part of the country offers, remains the centerpiece of the table. I would like to think my very best pics are still ones of burgers, but my inner Ansel Adams stirs me. And reminds me of how I need to get back to Bozeman. And soon.