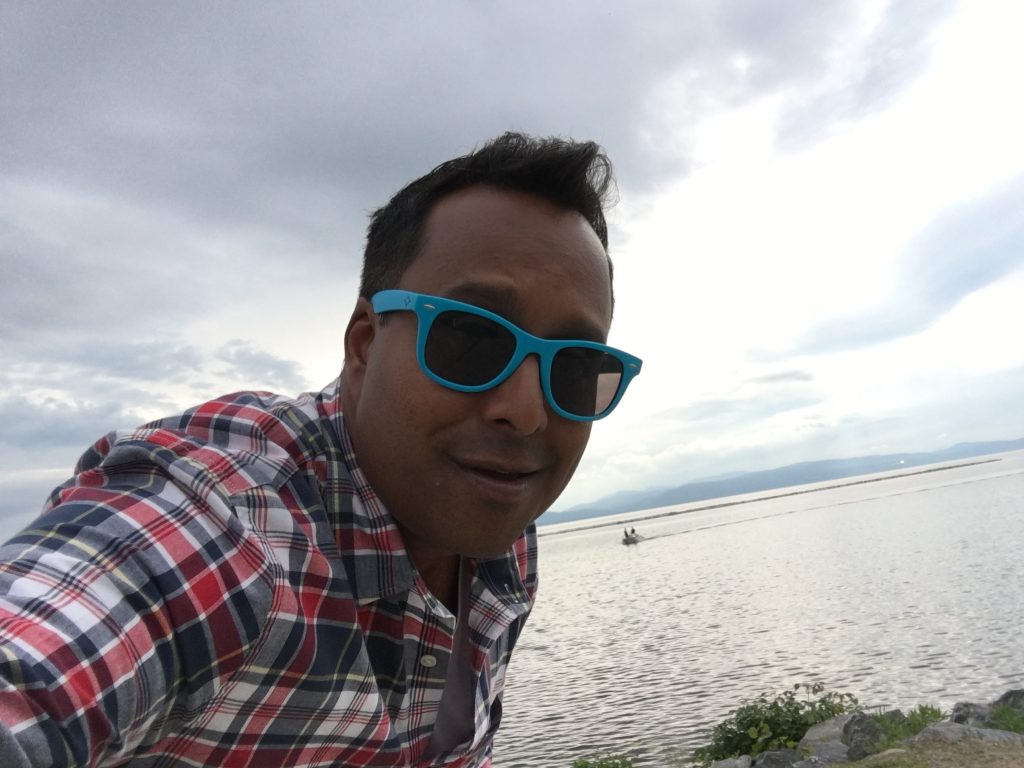 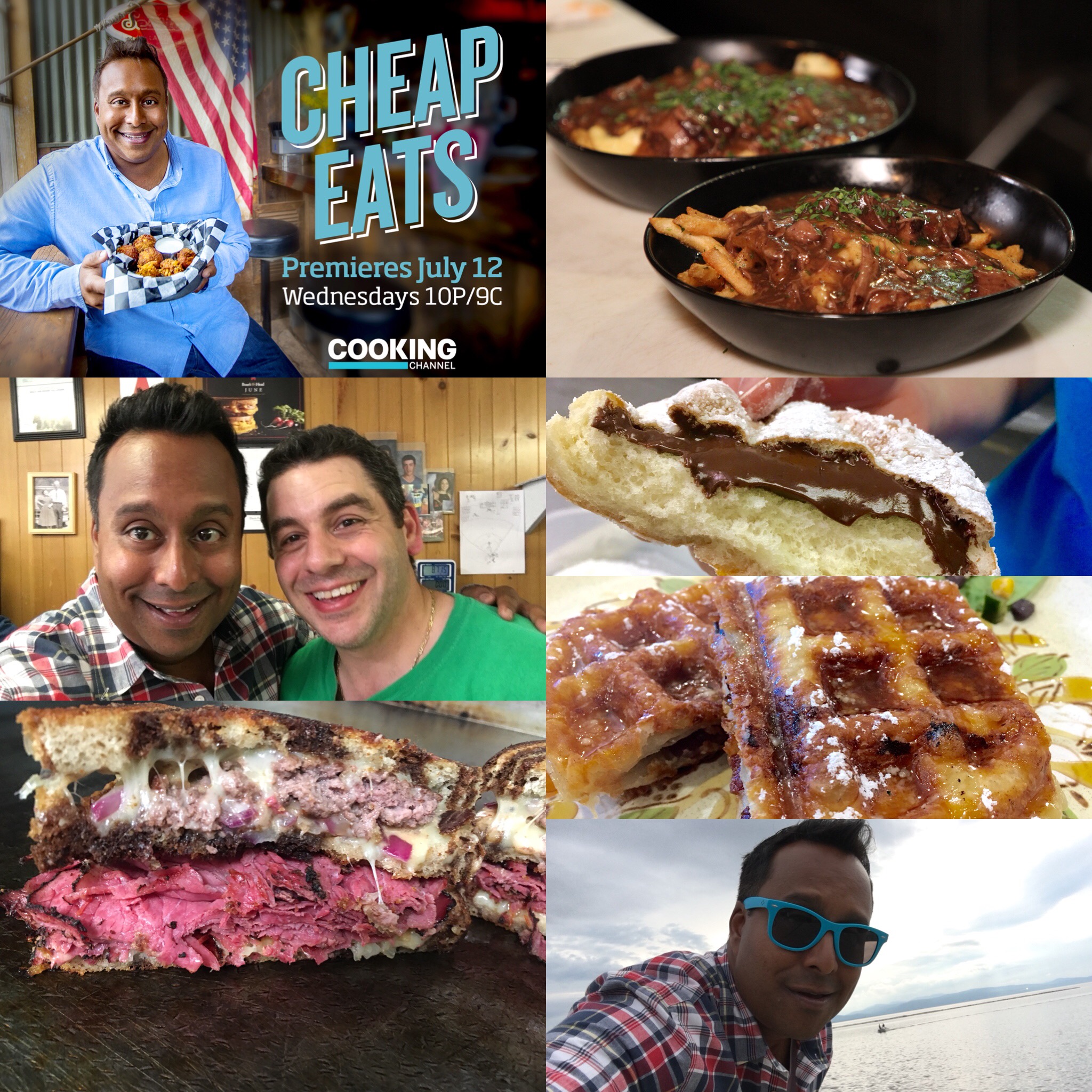 Boys and Girls, welcome to the Season Finale of Cheap Eats brought to you by the killer food scene and all around good vibes of Burlington, Vermont. Now I had never been to Burlington before, but I spent too many years listening to Phish and watching pals trot off to UVM(University of Vermont) to not have some idea of the potential here. First off, in June, Burlington is a beautiful place and we were lucky to catch a music festival while we were shooting here. Great beer scene, great restaurants and great music; Burlington reminded me a lot of my current home of Austin. And Lake Champlain? Truly gorgeous. I could not have asked for a better close to season 3 so get ready to take one last big bite of Cheap Eats Burlington baby! 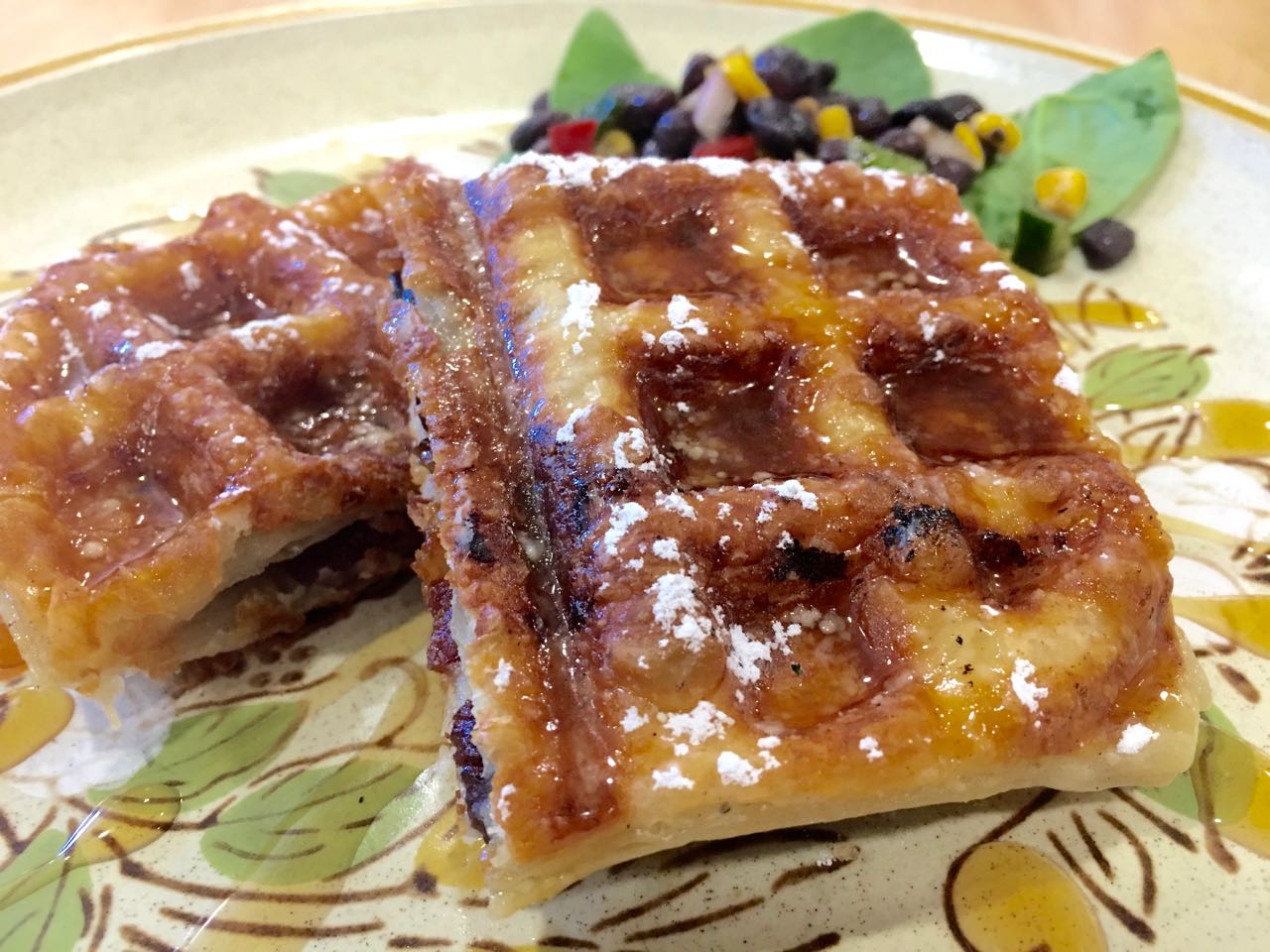 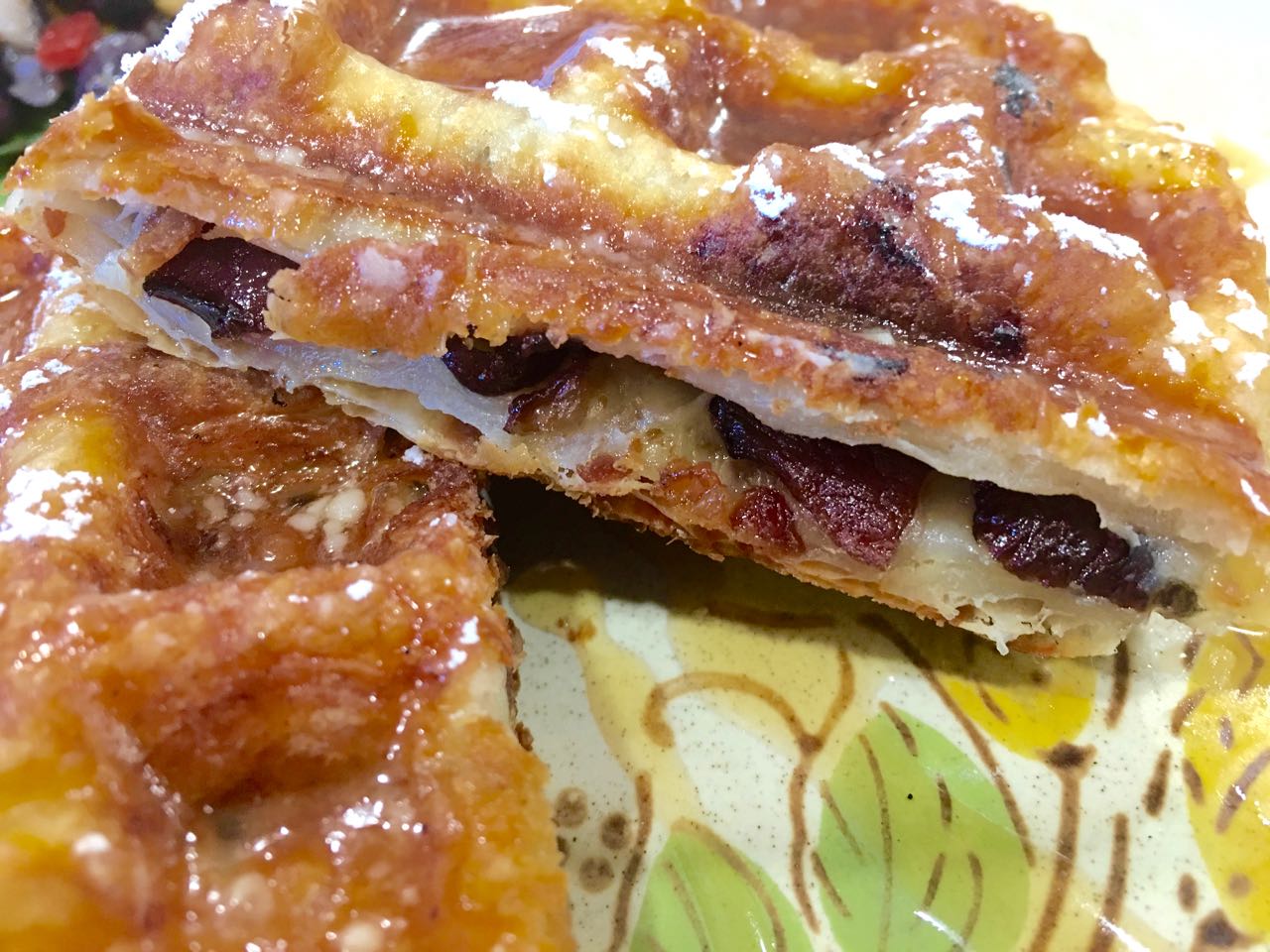 The Vitals:
the spot: Swingin’ Pinwheel Cafe and Bakery 11 Center st Burlington VT 05401
the eats: Bacon Maple Wafflini
the bucks: $6.50
the full nelson: the most to the point breakfast panini you can have

For those of us who partake in the swine, bacon is breakfast. It doesn’t take much to satisfy the craving either, two strips can go a long away, especially if the bacon is of fine quality and is hit with a little sweet. Well the Bacon Maple Wafflini is excellent bacon hit twice with the sweet. First the bacon is cured in Vermont Maple syrup and then it is pressed in between a waffle to be drizzled with, well more of that Vermont Maple syrup. Though bacon is familiar territory, what isn’t is the pinwheel dough Chef Andrew Machanic uses to make the waffle. Similar to croissant dough, pinwheel dough was part of a German Baking tradition Andrew grew up with, literally. His family would make pinwheel pastries twice a year, for Christmas and Easter and even back then, they would use a waffle iron to cook the pastry. While it looks like a waffle and eats like a waffle, the wafflini is made from a dough versus a batter. The result is a much lighter and flakier waffle experience. I went with the half order which was a clear bargain for $6.50 but even still, I would say this breakfast was just filling enough and gets straight to the point: waffle and bacon and I’m done. Andrew told me that when he started Swingin’ Pinwheel he didn’t want to make big breakfast plates piled with country potatoes nobody eats. So it shouldn’t surprise that I finished my plate. What was really wild was the bean salad that came on the side – not exactly something I picture going with a waffle or wafflini, but delicious, hearty and a much needed punch of zest. Andrew spent a lot of time out west, working in ranches, even dabbled in gold mining and he brought that western vibe plus a ranch hand’s understanding of what a good breakfast should be to power through your day. I found mine to be cheap, tasty and just filling enough to get me through a hard days worth of eating. Which I’m sure is almost as hard as riding a horse and roping cattle. 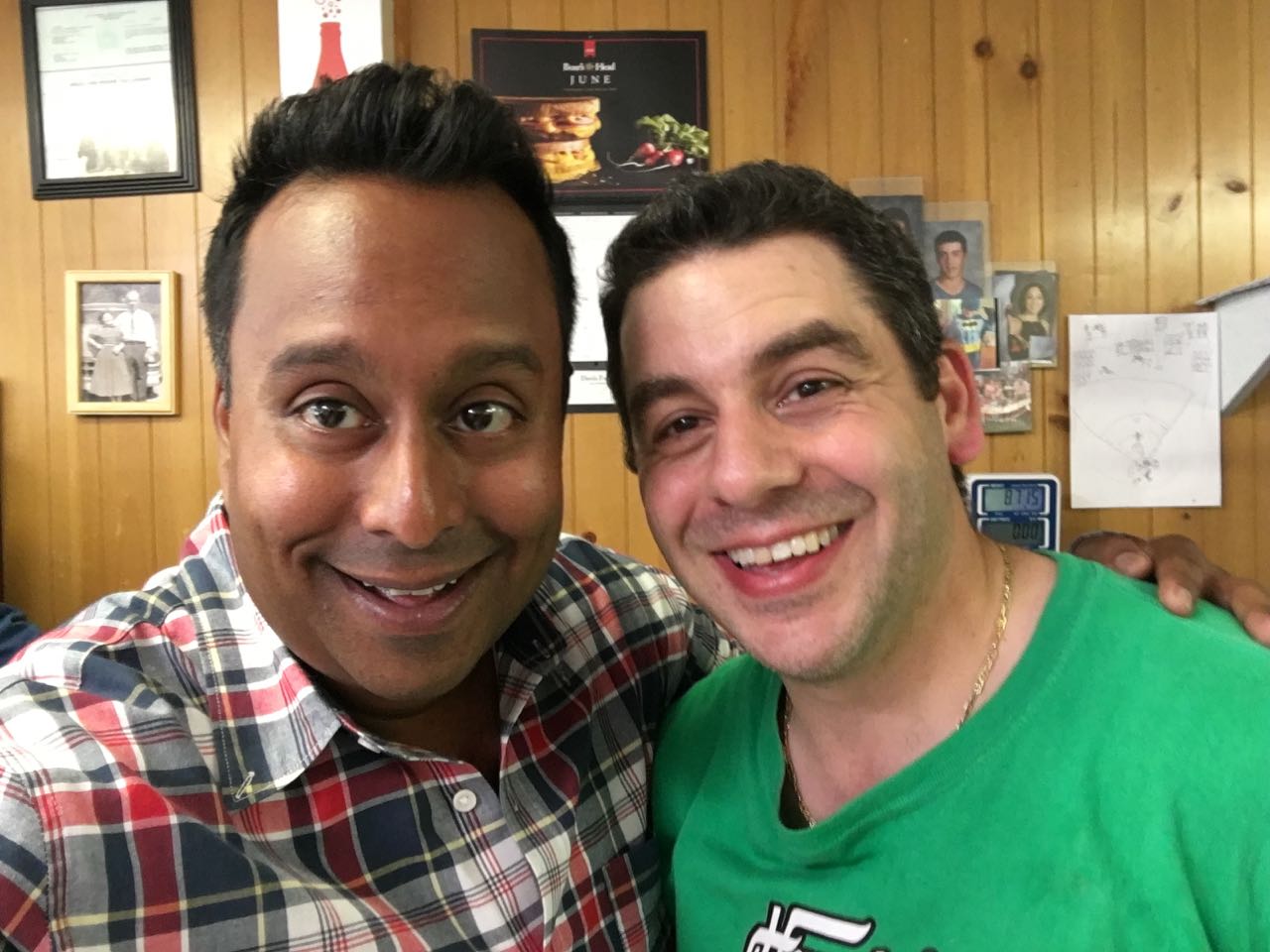 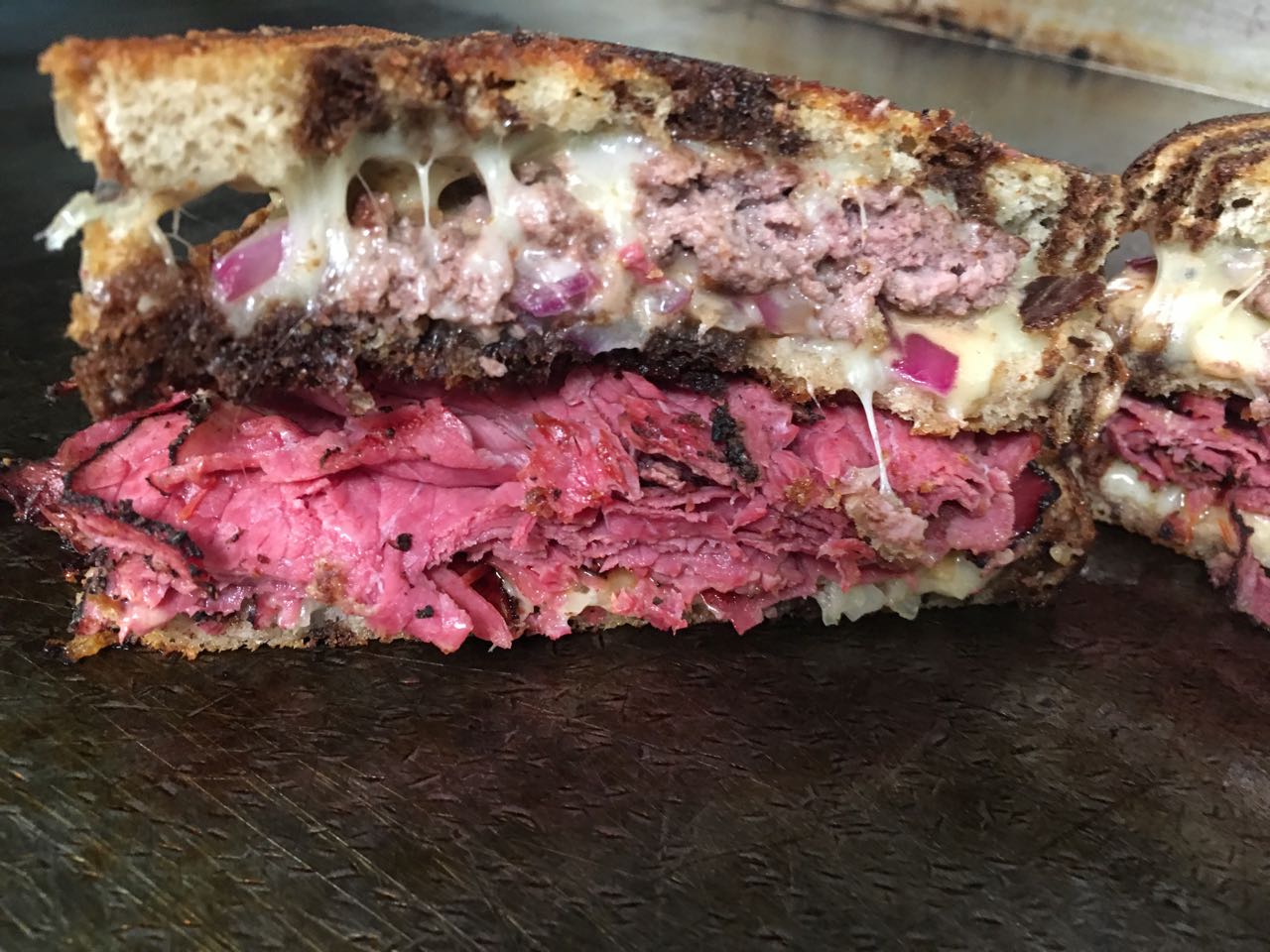 The Vitals:
the spot: Handy’s Lunch 74 Maple st Burlington VT 05401
the eats: Macho Man
the bucks: $9.95
the full nelson: the best case for pastrami on a burger

Oooohhhh yeaaaaaah. Even more obvious than me uttering those two words to the tune of the legendary Randy Savage is the realization that the best burger to get at a diner is the patty melt. Patty Melts are a wonderful burger experience where the perfect melt of a grilled cheese sandwich embraces a hamburger patty that is then enshrouded in the aromatic spice of a caraway seed encrusted slice of rye bread. And it is a heavy burger too. Then there is a reuben which frankly every diner in the country by law should have on the menu. Now let’s just suppose a certain food show host feels like they are 20 years old again and is looking for that late night reuben but is torn between a patty melt. Now as heavy as a patty melt is, heavier still is the crown of indecision. Suddenly you find yourself saying “Oh yeah, Early Handy, you third generation slinger of this glorious Burlington diner, I want the Macho Man, my cholesterol level be damned”. It is excessive folks but it works. And it’s worth the calories because Handy’s Lunch is as vintage as diners get complete with a 3rd generation owner who also happens to be my brother from another mother. As much as you will enjoy what’s on the plate, when you look around at the customers, you realize that there is no place they would rather be then right here. Just a legit gem of a diner. Now excuse me while I go on a red meat fast for the next year. 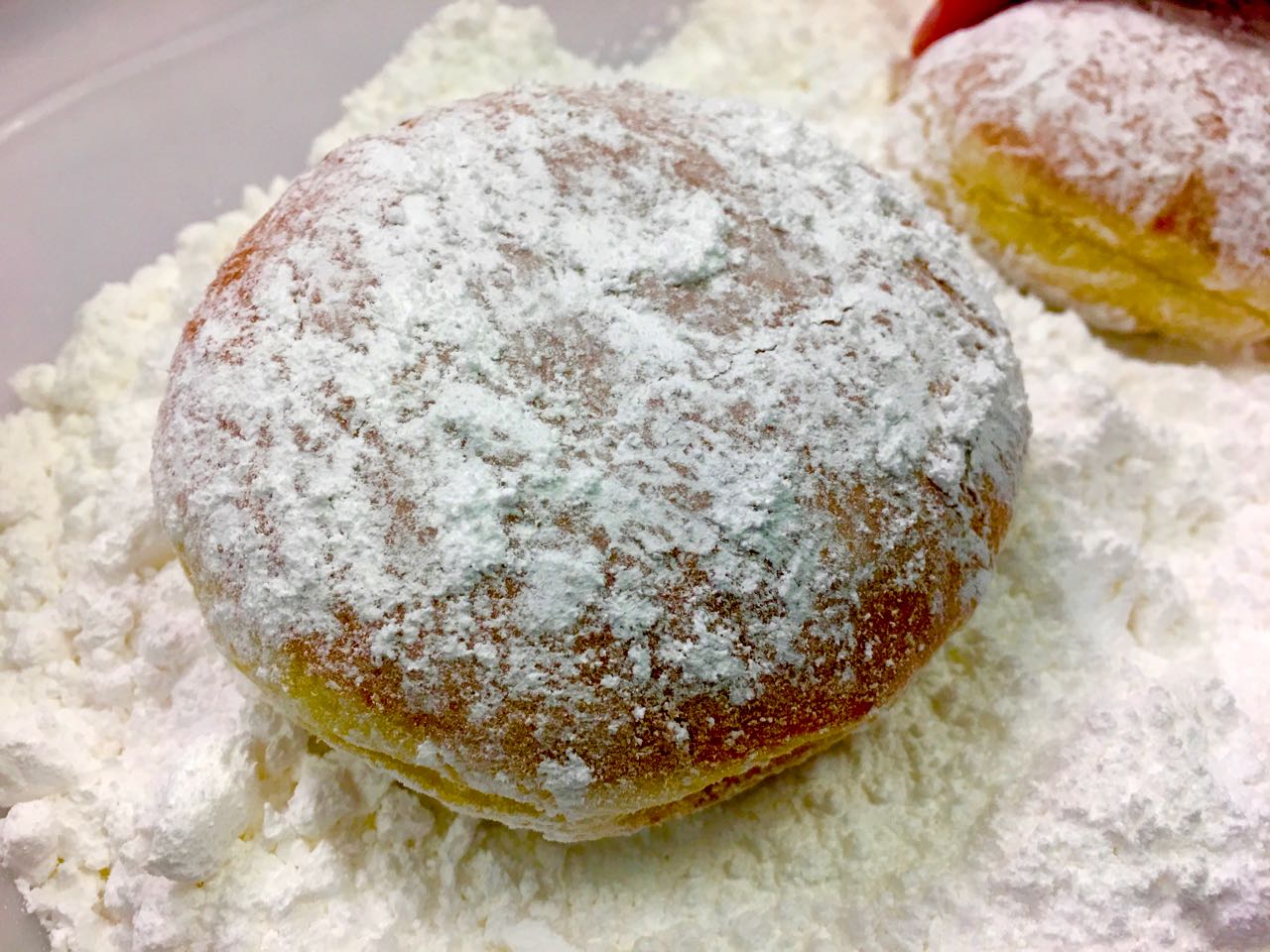 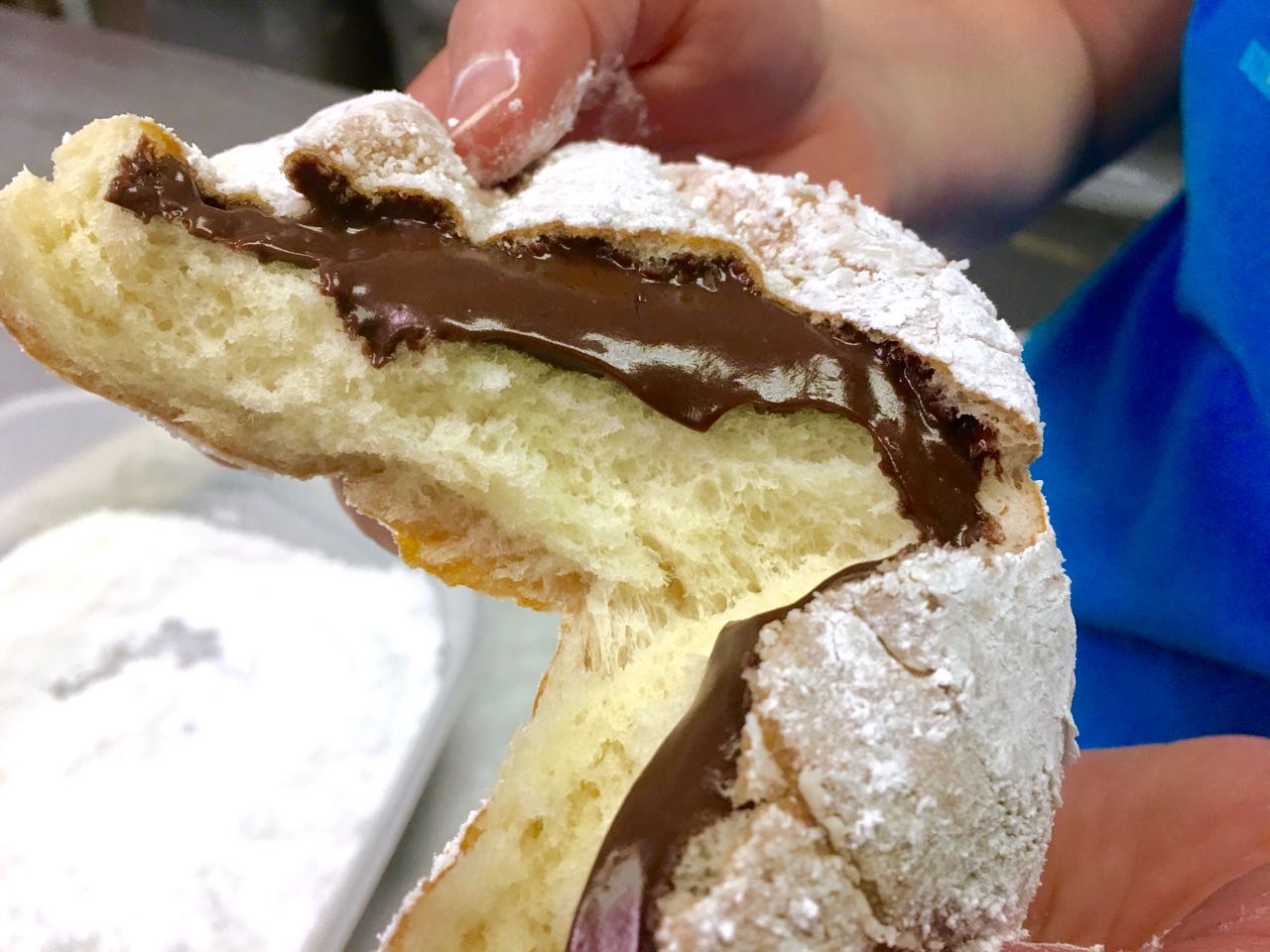 The Vitals:
the spot: Doughnut Dilemma closed and in process of relocating
the eats: Chocolate Cream filled donut
the bucks: $2.75
the full nelson: the only dilemma is when they will return

I suppose given the natural ups and downs of the restaurant industry, it would be inevitable that a place we feature on Cheap Eats would close. But it was surprising that Doughnut Dilemma closed just weeks before Cheap Eats Burlington aired. Alas I am reminiscing on a delicious donut experience that for now may be lost for all time, but still I must share the love for this rich creamy chocolate stuffed fried dough. First off, great donuts are fried to order which is why they alway rocked back in the day when you hit a supermarket in early AM. Having the Chocolate Cream donut within an hour from the fry was just instant snack bliss but that chocolate . . . oh Lordy. Not only is the filling made in house but Baker and Owner Michelle Cunningham uses plenty of ganache: mix of chocolate and cream that you a lot in truffles. I really don’t experience the word truffle with the price of $2.75 often but you can connect the dots on why this snack is, or rather, was a Cheap Eats slam dunk. It’s just the “was” part that gets me sad. Here’s hoping that this donut dilemma will be resolved and soon. 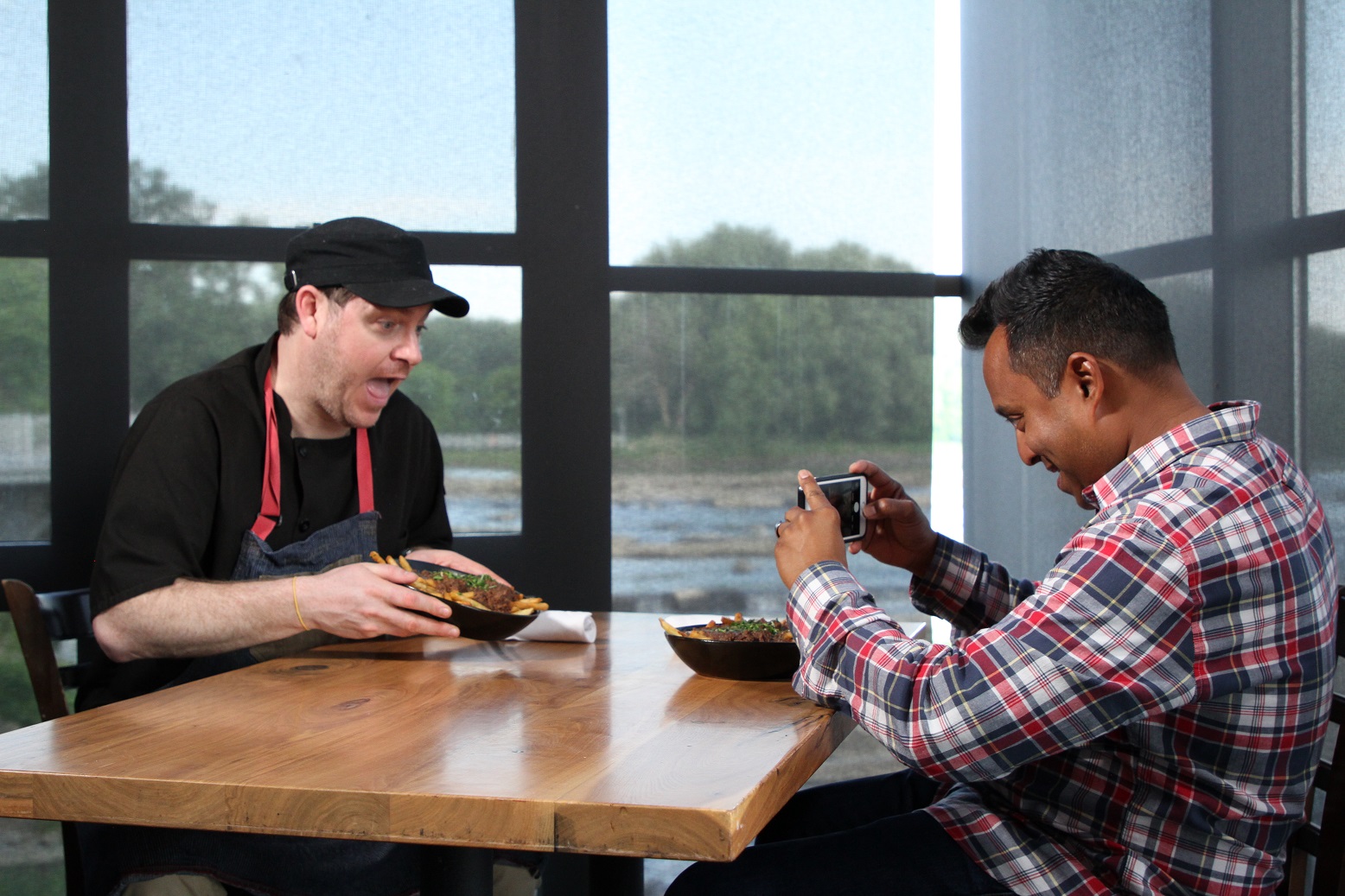 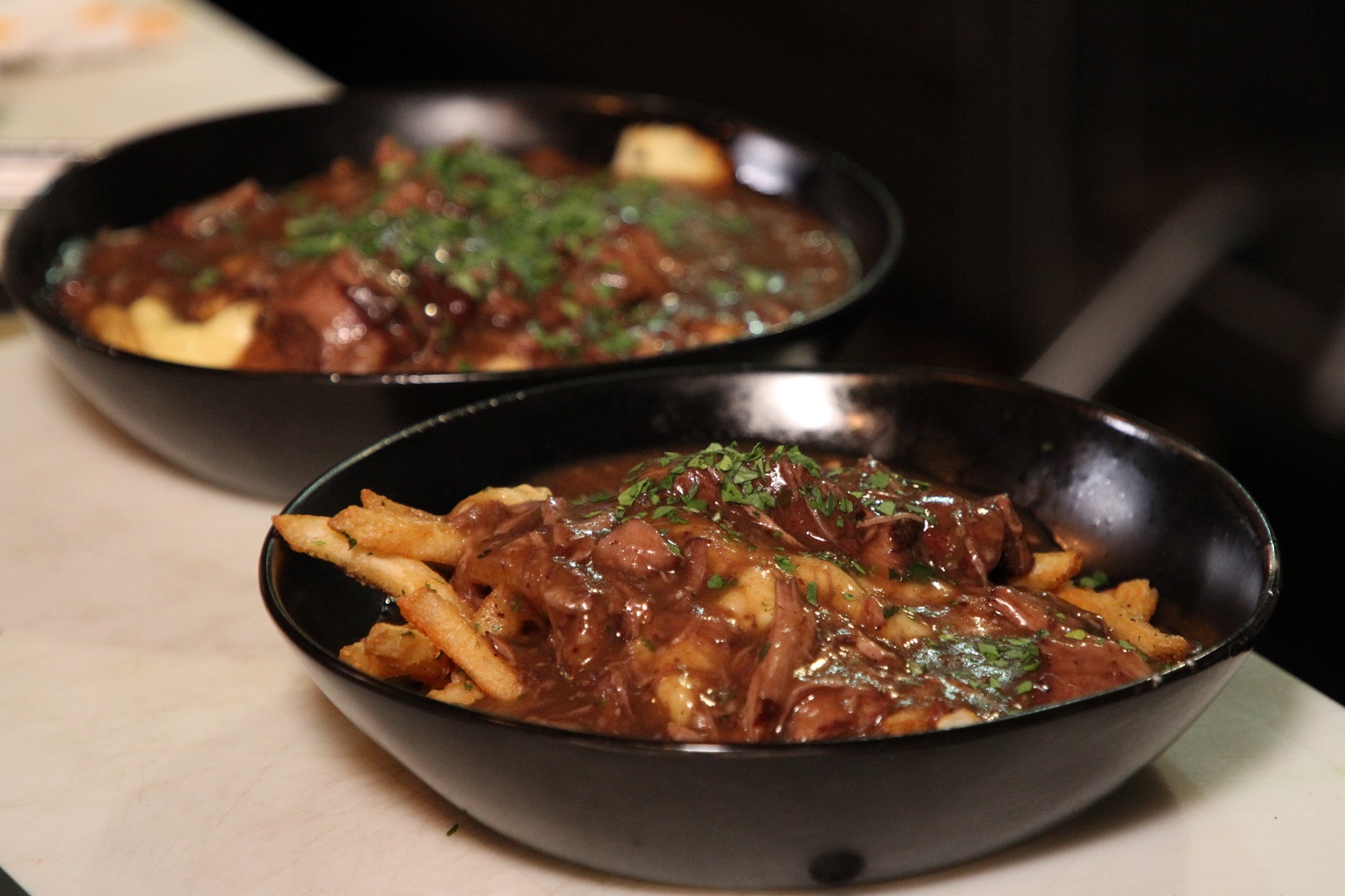 I have never had a proper poutine but it would make sense that the closest one I would get to date would be in Burlington, which is just a two hour drive to Montreal(and yeah I can’t WAIT to do a Cheap Eats up there!). Chef Adam Raftery has done plenty of time manning the stoves at pricey white table cloth restaurants, Waterworks being one of them, but the play here was getting a $13 poutine that could easily feed two while showing off the fancy culinary work one sees at $30 entrée restaurants. To the uninitiated, poutine is fries covered in gravy and cheese curds, a Canadian thang that has started to make its way down south for obvious gluttonous reasons. Now at its bare bones minimal, this dish resides at the chili cheese fries level of gastronomy, but as we have seen over the past 20 years or so, comfort food has been taking under the chef’s wing and the results for poutine have become extraordinary. In Los Angeles, Indian centric restaurant Badmaash makes a poutine with Chicken Tikka, cheese curds, gravy and hit of Indian spices. That was my first experience with poutine and it may have shaken my bar for the traditional but your boy LOVES braised short ribs and sometimes the best move to make at a $30 entrée restaurant is the the braised dishes. Employing tedious technique and often expensive supplementary ingredients like wine, braised dishes often are best left to the professionals if you are not a patient home cook or you tend drink more wine than cook with it. This makes the play for the Short Ribs poutine an easy one and you get a TON of it. I mean, trying to finish this on your own is reaching Man vs Food level proportions. Easily worth the $13 and as legit a poutine as you will find on this side of the Canadian border. 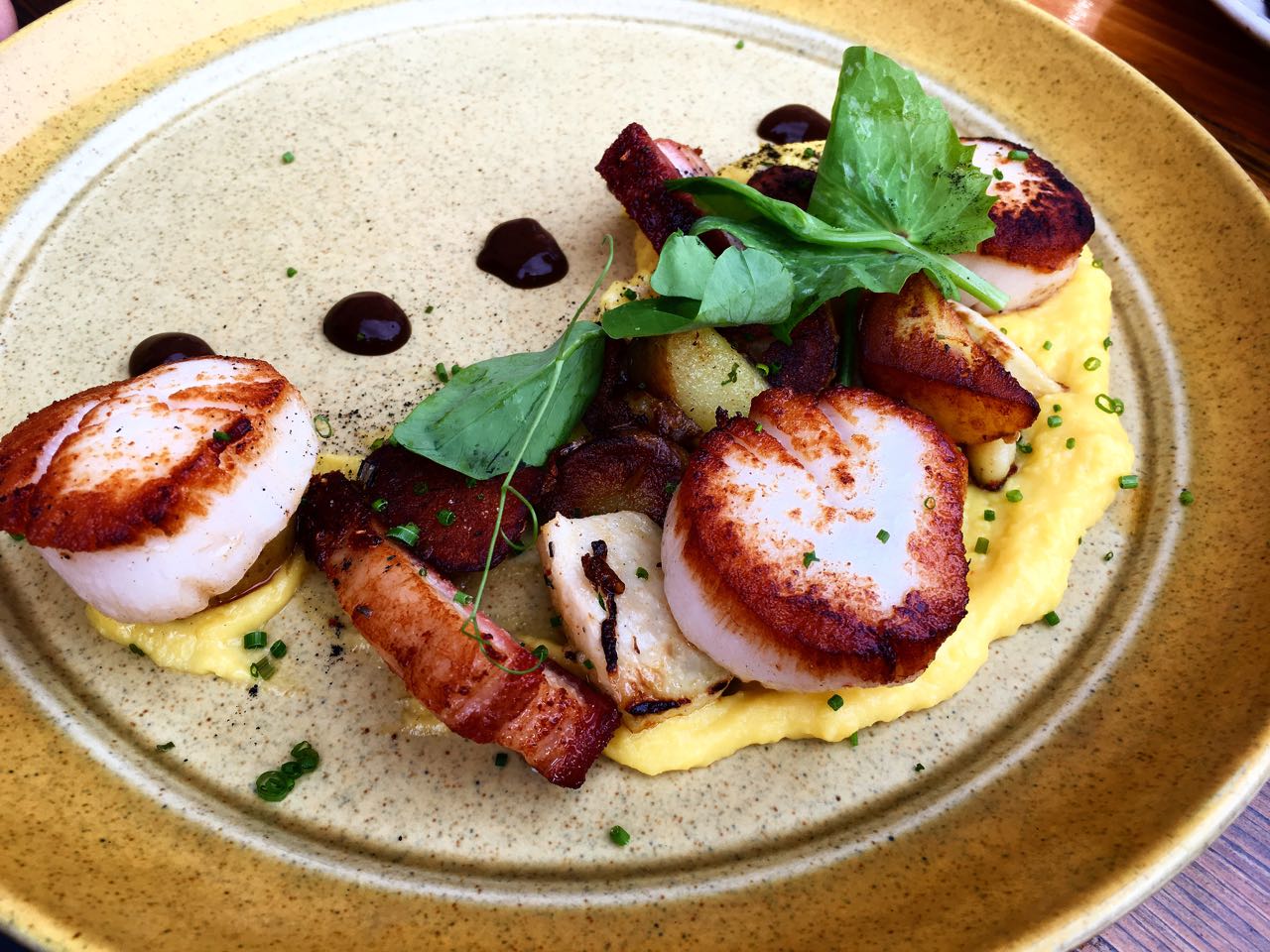 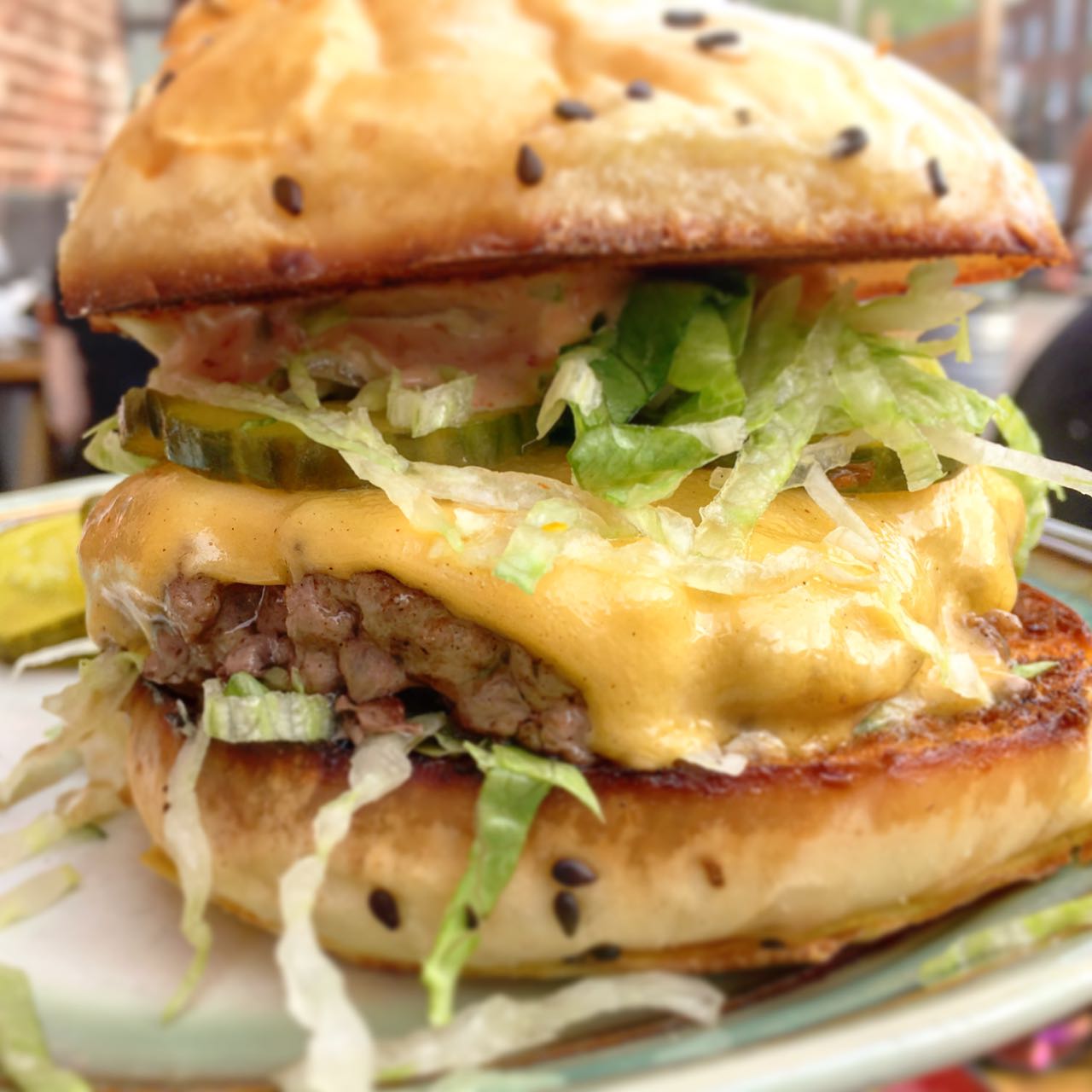 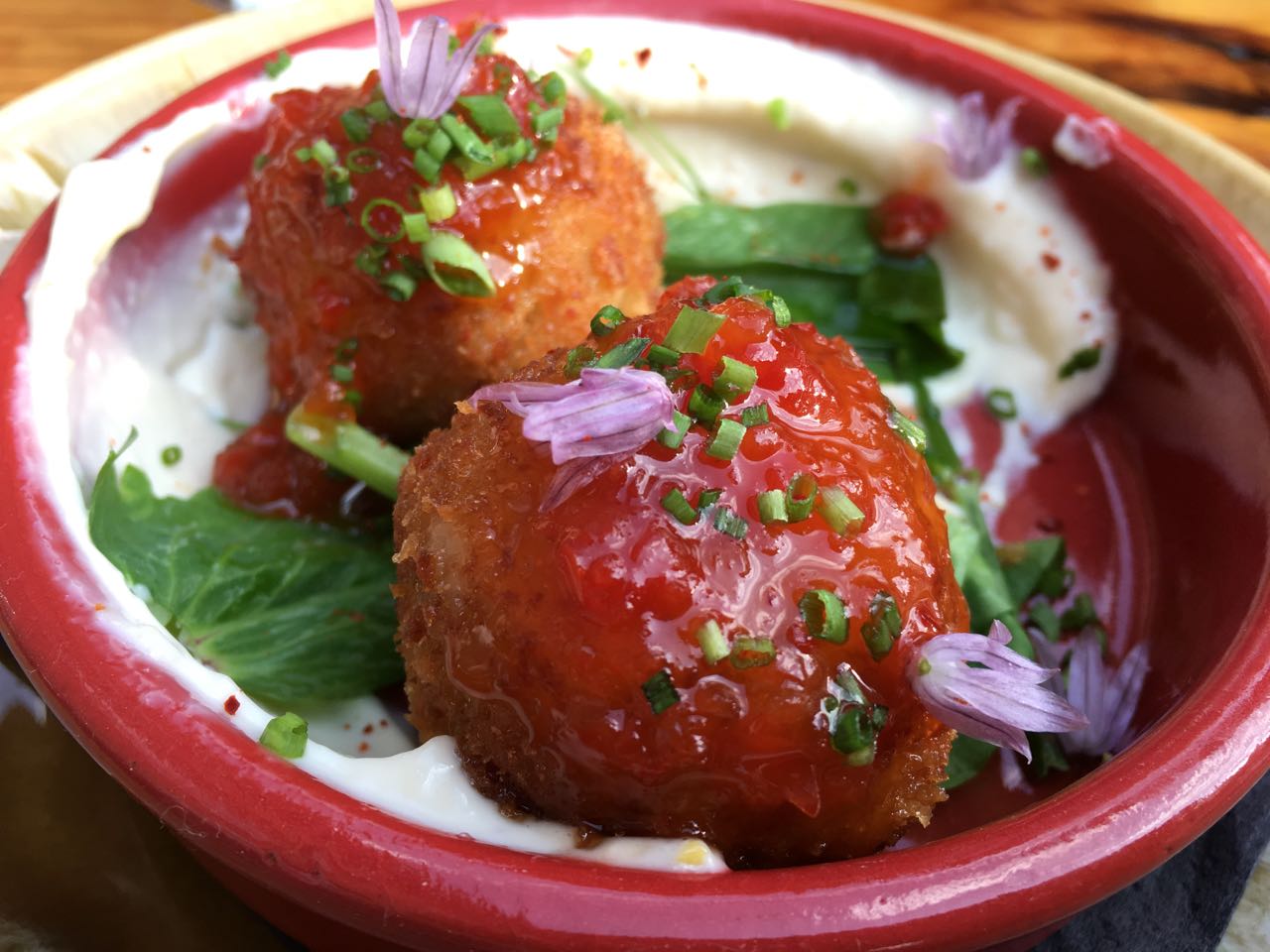 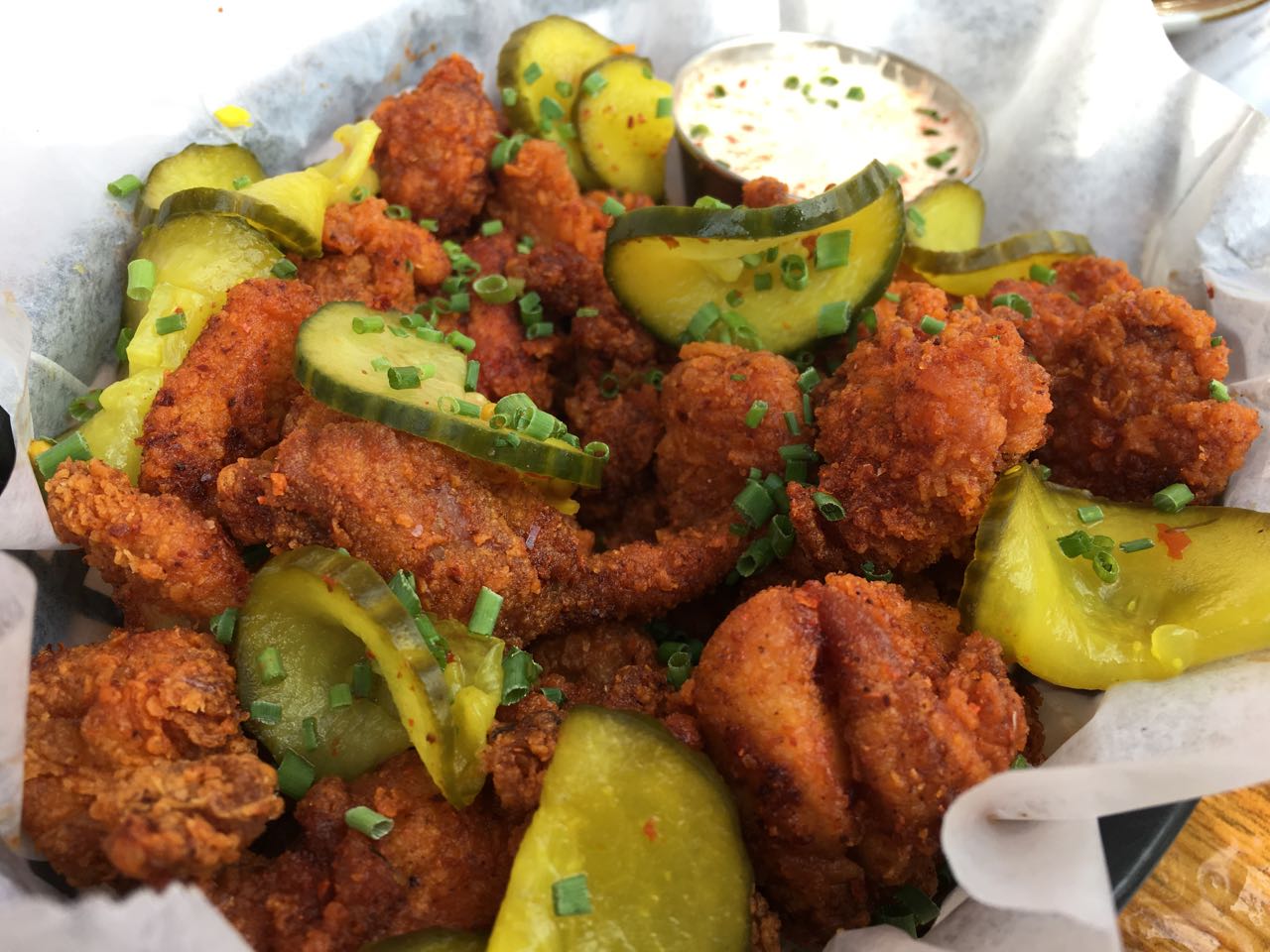 The Vitals:
the spot: Arts Riot 400 Pine st Burlington VT 05401
the eats: 400 Burger, Popcorn Chicken, Pheasant Balls, Scallops
the bucks: $12-$18
the full nelson: If I lived in Burlington I would eat here twice a month

When I wasn’t shooting Cheap Eats in Burlington you probably could have found me at Arts Riot, an absolutely fun concept where food, drinks and art get tossed around like wings in a bowl of Frank’s Red Hot. I ate here multiple times and whether I went for the more adventurous like Pheasant balls(yup the game birds) to the more familiar like the 400 burger, I was never disappointed. When you breeze through the menu, you see a smattering of Asian and Mexican cookery in a laid small plates setting. The general acceptance of these flavor profiles as fair game whether one was craving an “ethnic food” or not speaks volumes to the state of dining we are in and where Chef’s heads are at. These are indeed good times to go out to eat my friends. Arts Riot just rocks and even if you think the burger is just a “playing it safe crowd pleaser” think again. They added a dash of something just special to make a diner style burger as satisfying and as exciting since I first messed with Shake Shack in the early 2000s.  Yeah, your welcome for me telling you about this place. 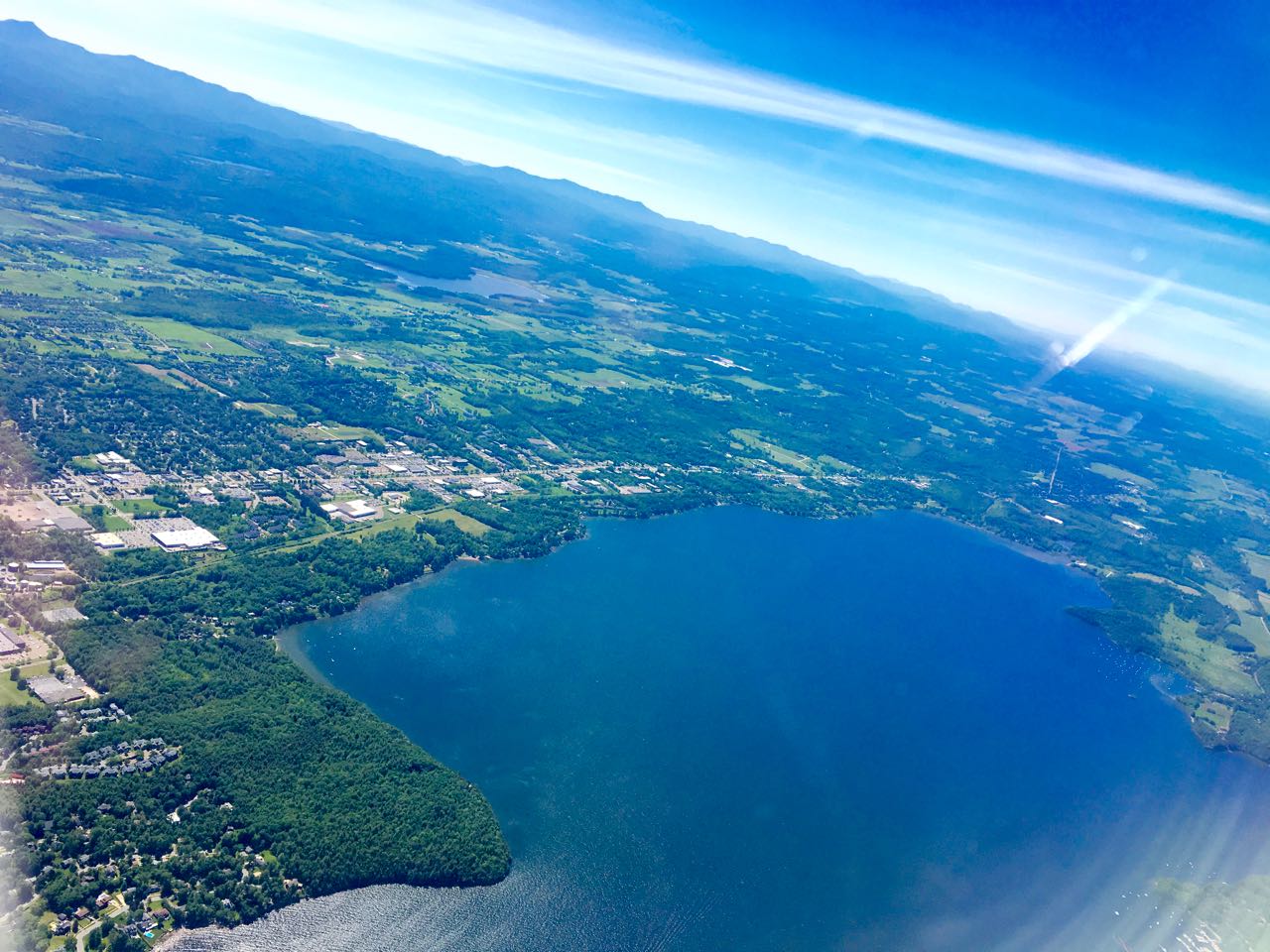 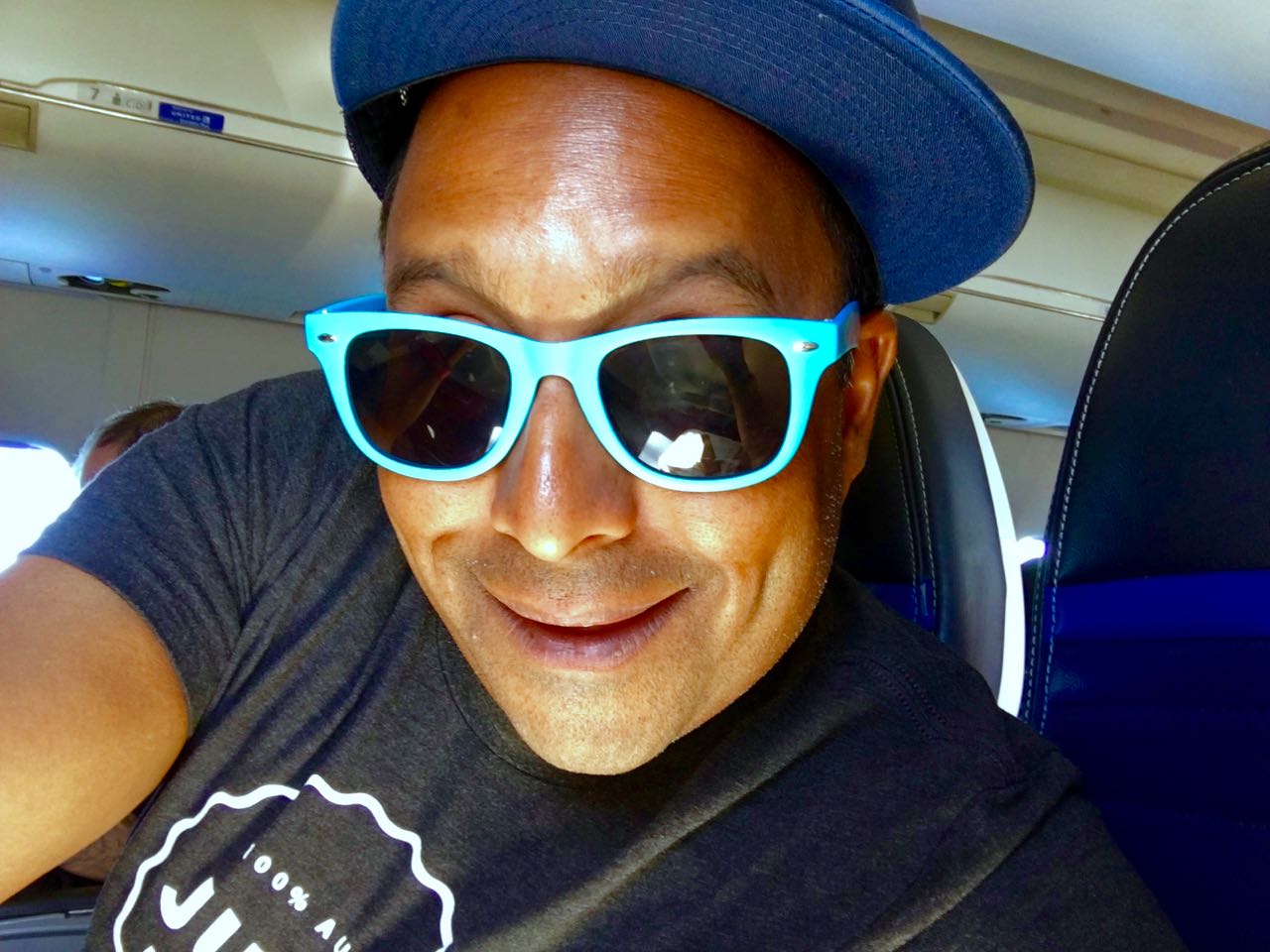 Goodbye Burlington and goodbye to Season 3 of Cheap Eats my friends! I hope the ride watching these last 13 episodes was as fun as it was for you as it was for me. As I look back at this season, I was blown away by the diversity of small towns in the East Coast and found places like Cincy and Milwaukee to be on the verge of becoming breakout food cities. As I said earlier, this is a great time to be eating out in America and so get out there and keep your eyes peeled for your boy in the blue shades, hunting for the next!