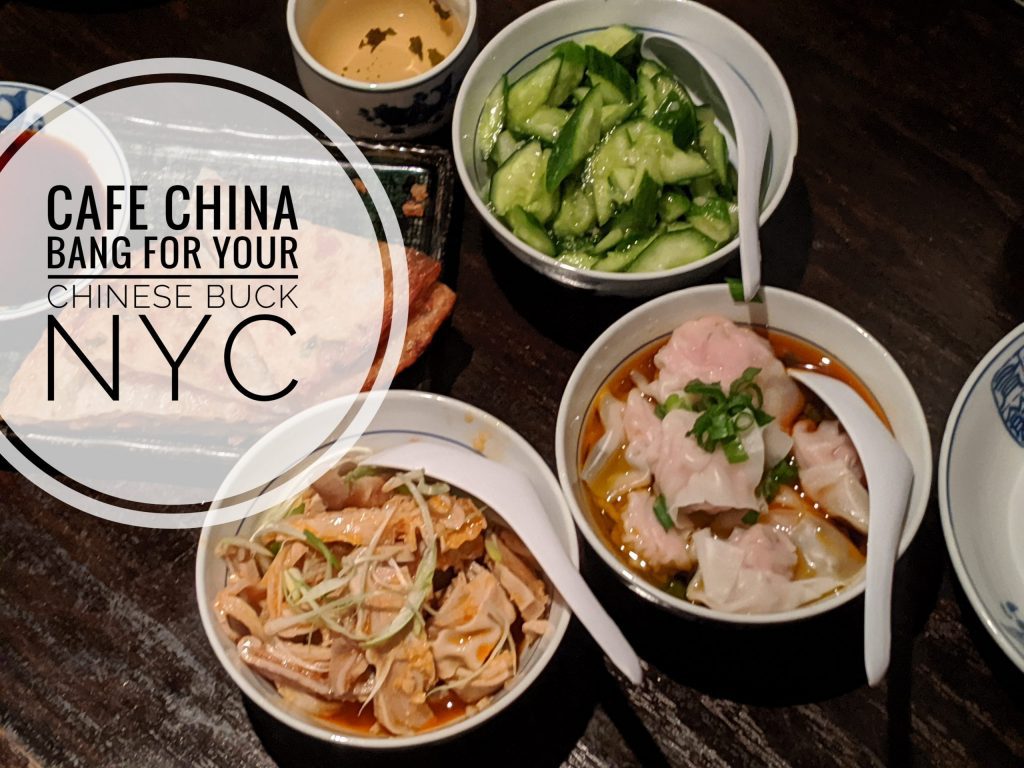 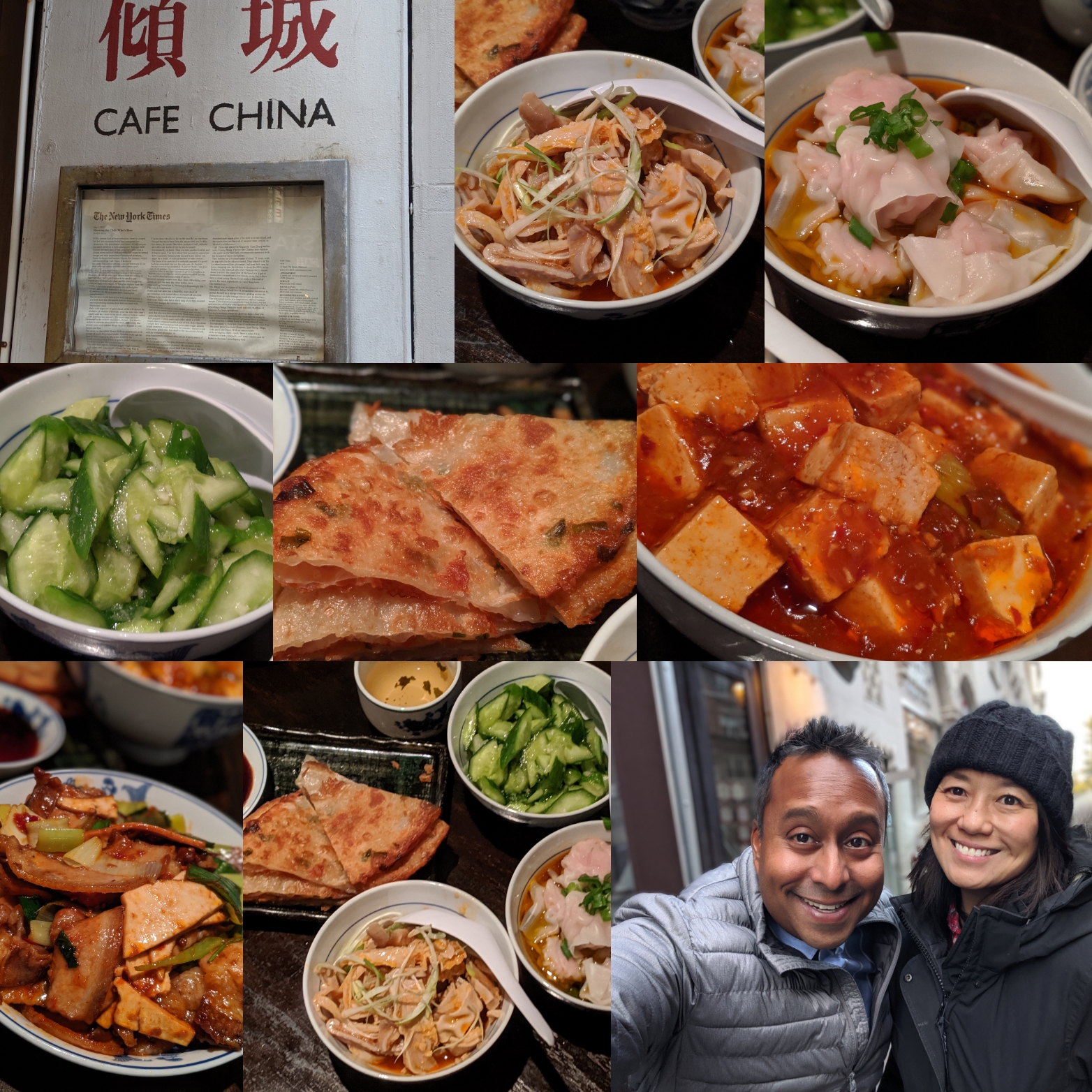 I have been to New York City many times over the years and yet every time I go I feel like I overlook getting a good dose of Chinese eats. Neighborhoods like Flushing Queens have long been on my radar but save for a trip to Brooklyn for Cheap Eats, I usually find myself in Manhattan where Chinese eats are served to the masses. But that don’t mean it ain’t legit . . . 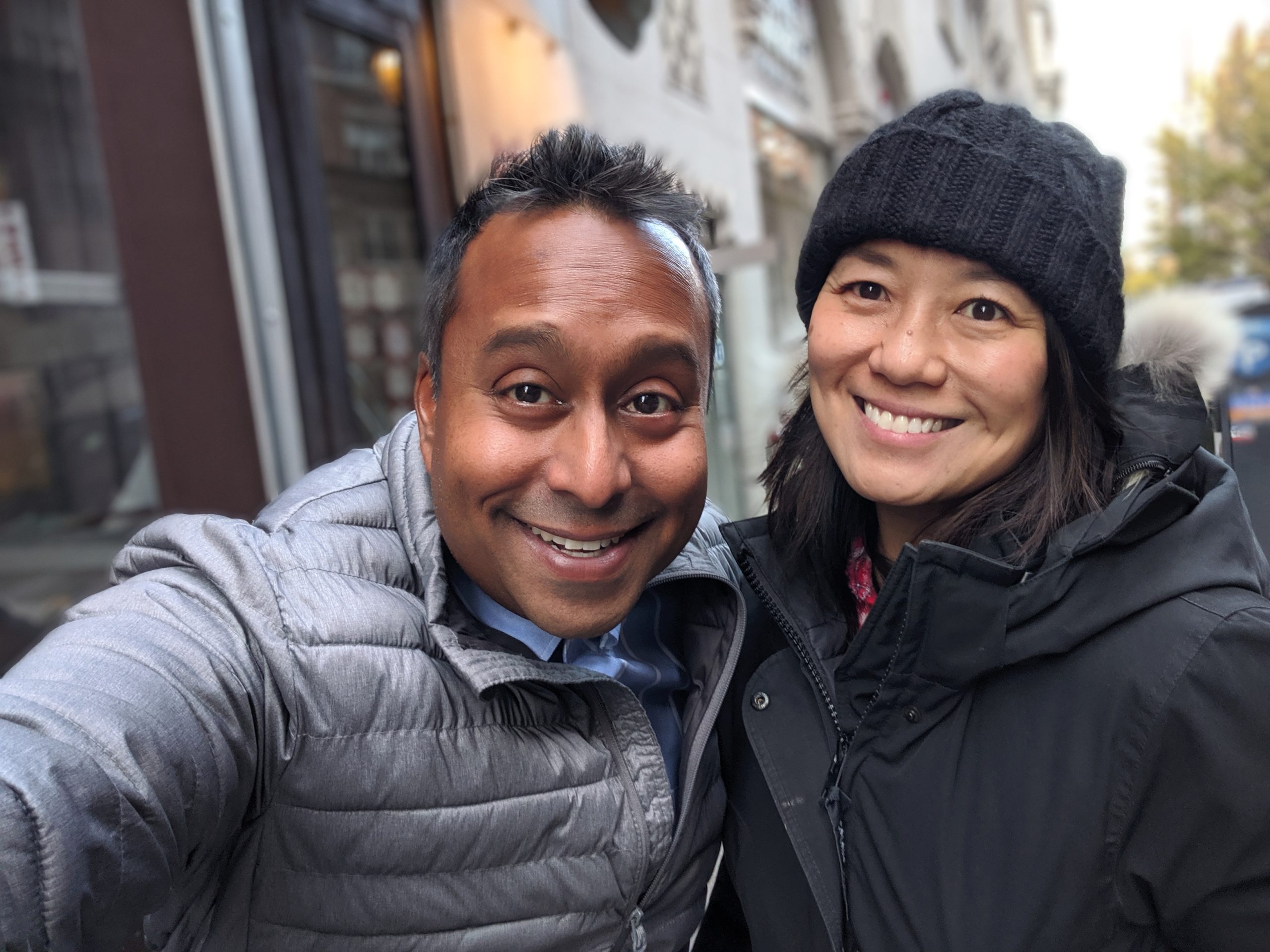 Major props go to veteran Food TV producer Irene Wong(Man Fire Food, Food Paradise, and loads of Giada DeLaurentis shows) who put me on to Cafe China, a Szechuan Chinese restaurant in the middle of Manhattan. Besides the addicting, mouth numbing chili oil that graces more than a few Szechuan dishes, I humbly remain a Jedi in training, which means I let Irene order. And we went to town. 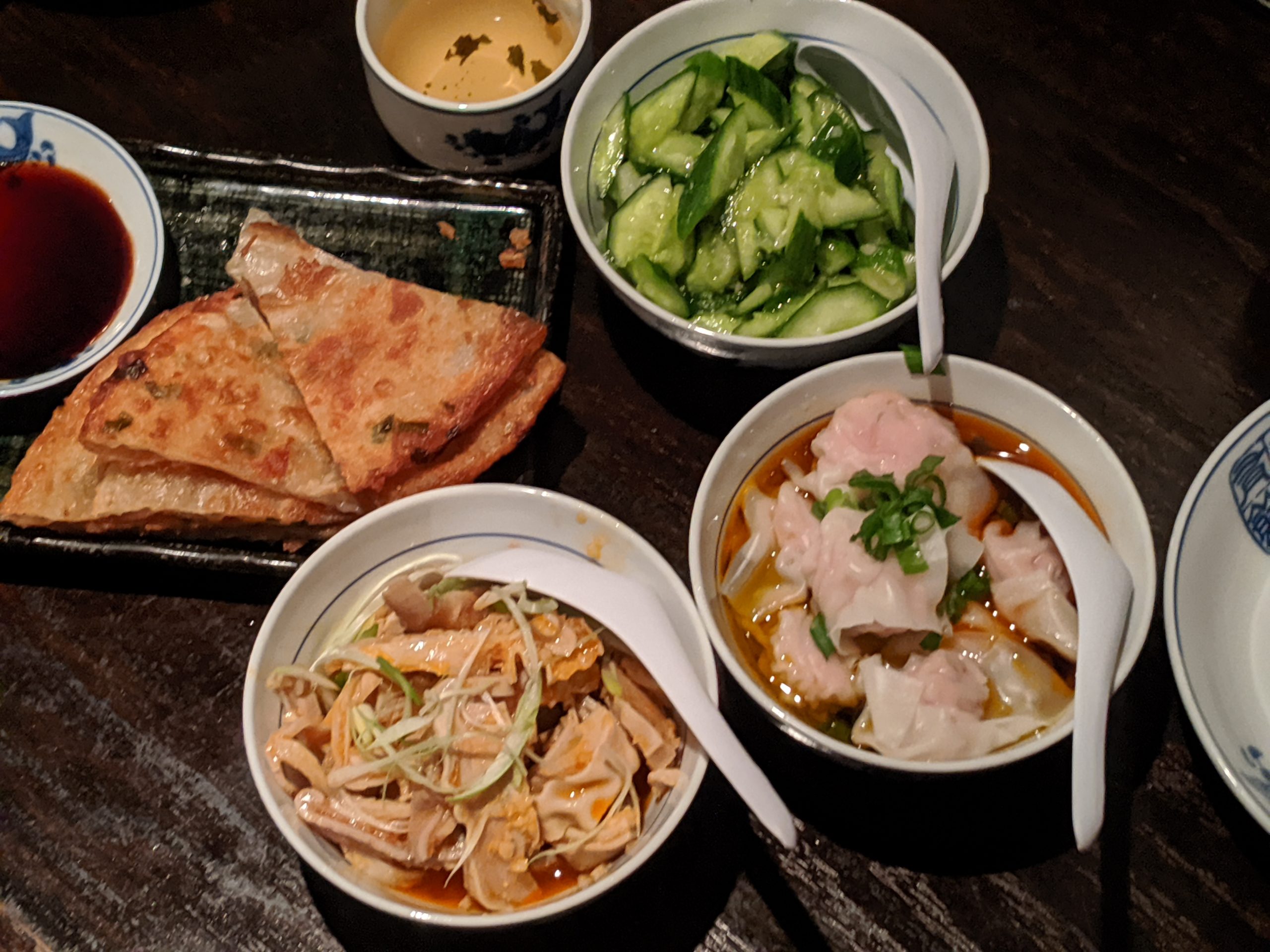 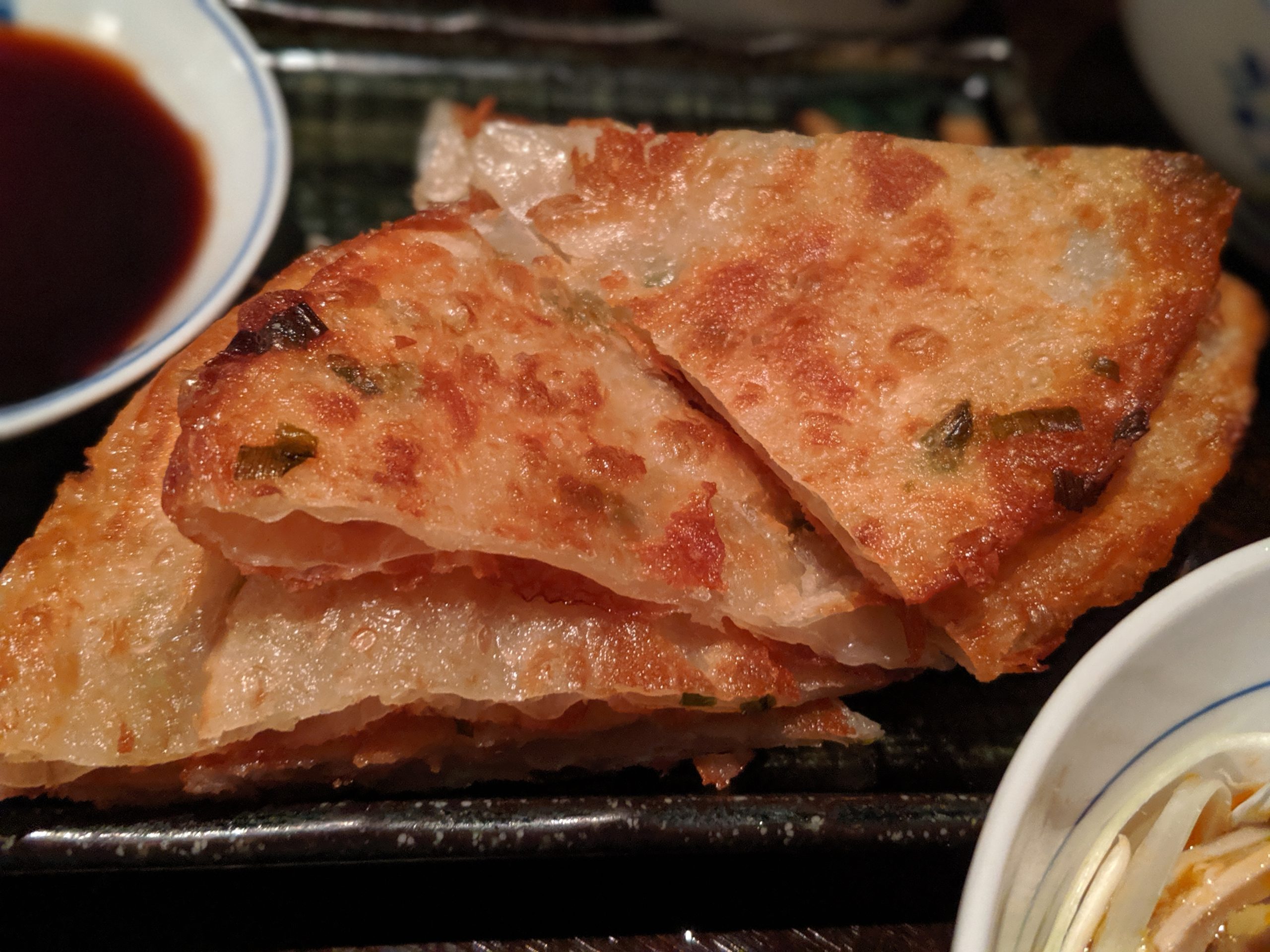 Cafe China has over 60 items on the menu, not including desserts and daily specials. Still, the very first dish that came out of Irene’s mouth was the Scallion Pancakes. The savory flatbread is rumored to have been the inspiration for pizza by way of Marco Polo way back when, at least Wikipedia thinks so. I’m inclined to think that, like pizza, everyone loves scallion pancakes. It reminded me of a paratha, an Indian fried bread and relies on the same concept that fried bread plus some savory fillings make for some fine eating. 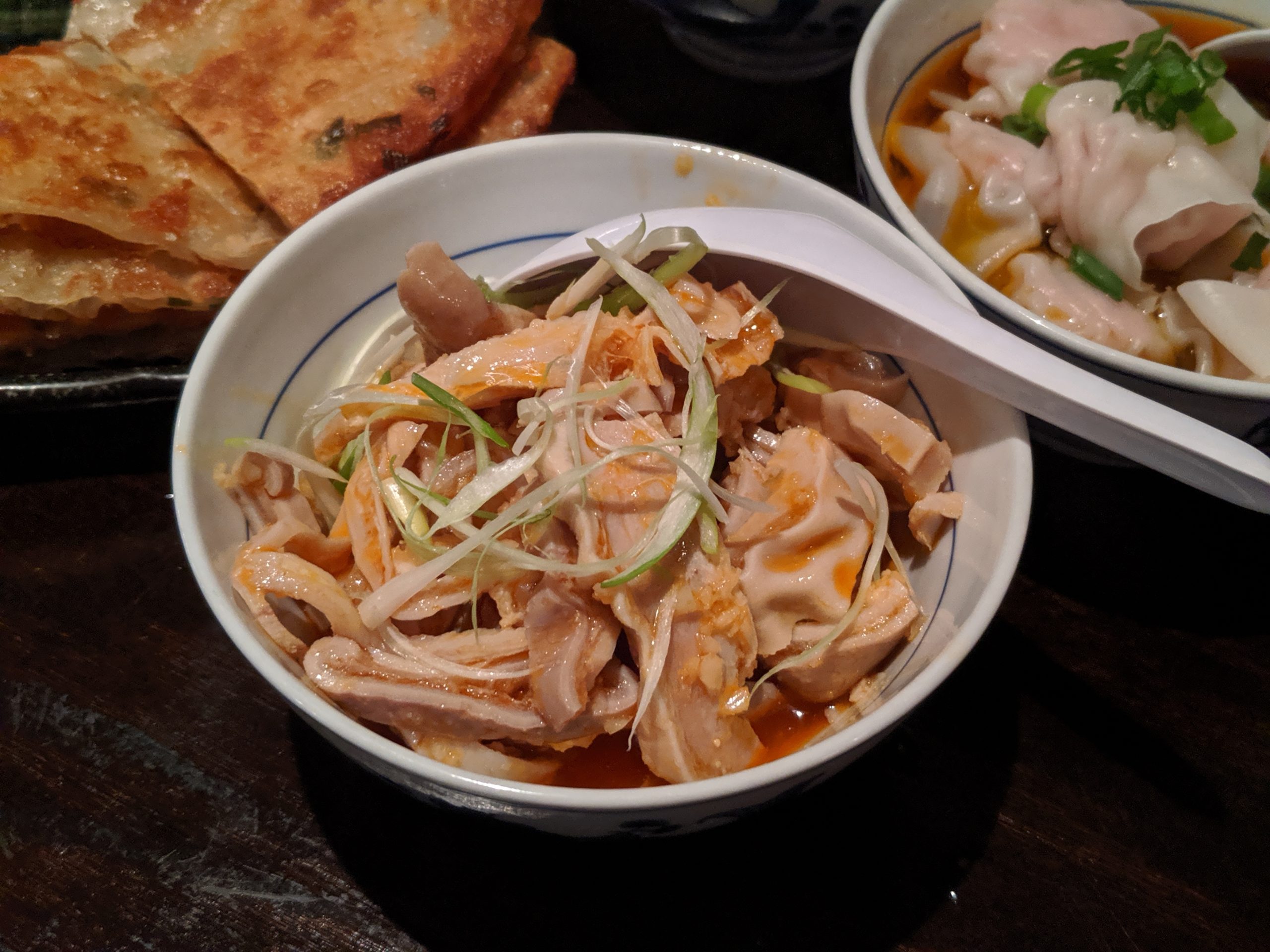 And so does cold tripe in chili oil. I absolutely fell for tripe in Mexican dishes like Menudo and Buche tacos. I’ve since moved on to try tripe in Italian and Chinese dishes as well. I guess when a culture has been around for 5,000 years, they learn how to cook almost anything well. 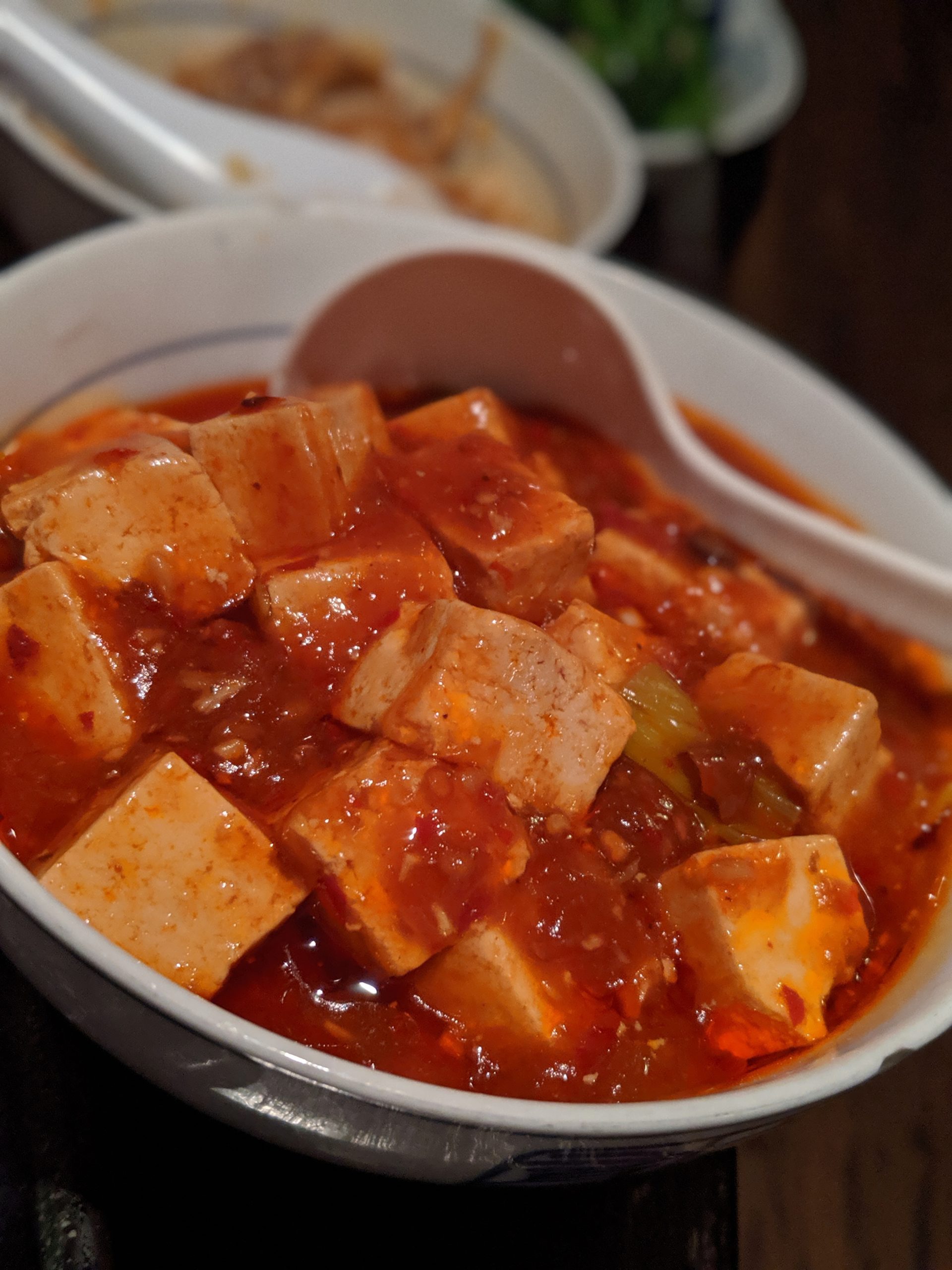 Cafe China might have had an off day when it came to the Ma Po Tofu seen above. The fiery Szechuan dish does a number on tofu’s cake like texture with a poach and stir fry. I found the sauce a little thick and not nearly as spicy as other dishes we had at Cafe China. And if you haven’t gotten the memo by now, here it is: Szechuan food is for spicy food lovers. 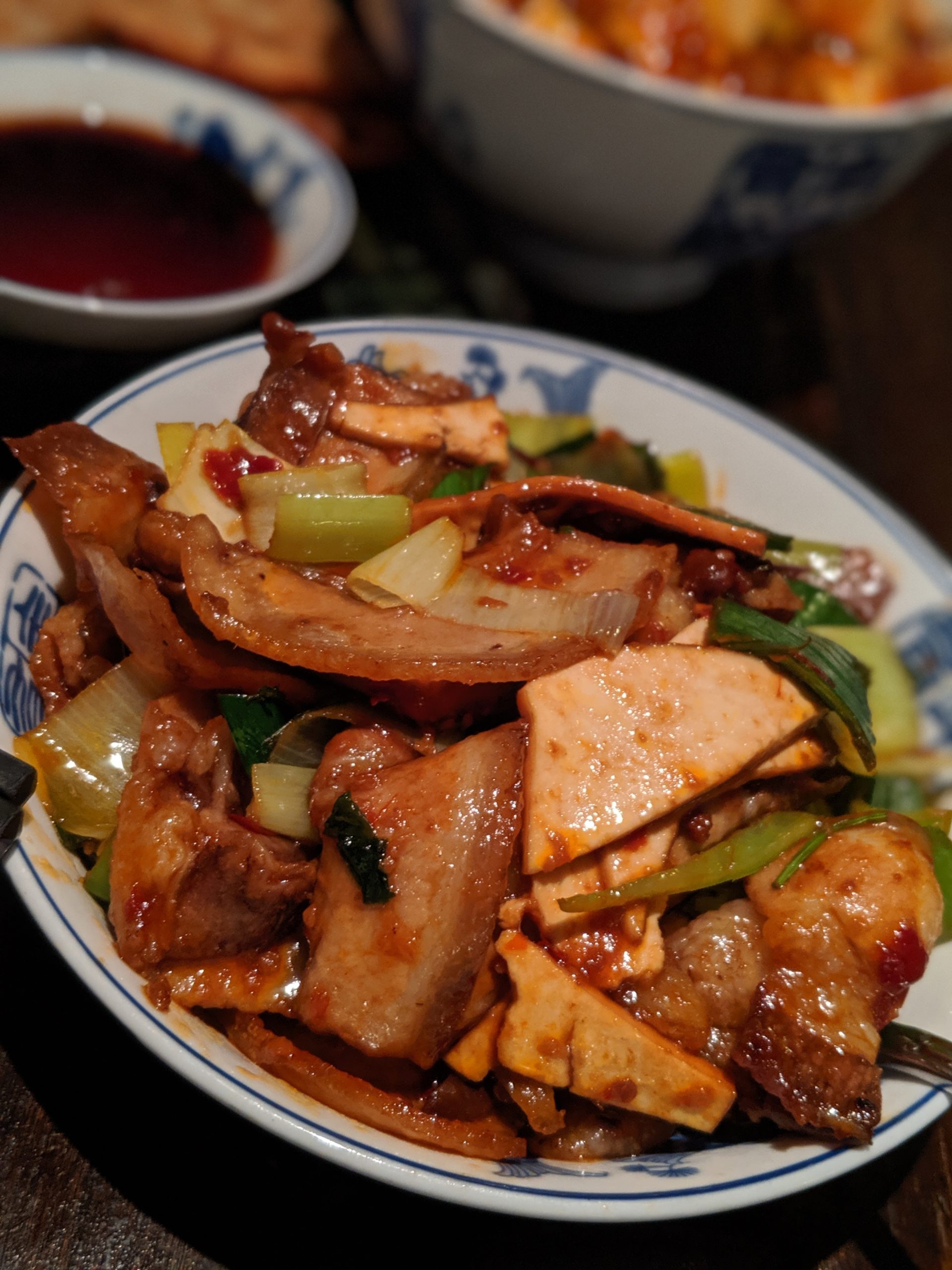 What’s not to love about smoked pork belly at a Chinese restaurant that likes to kick up the heat?Yeah, we were pretty full at this point, but this was a dish you kept picking at, even when you have tossed your napkin onto the table. If there weren’t 50 something dishes I still have to try at Cafe China, this would be on the rotation at every visit. 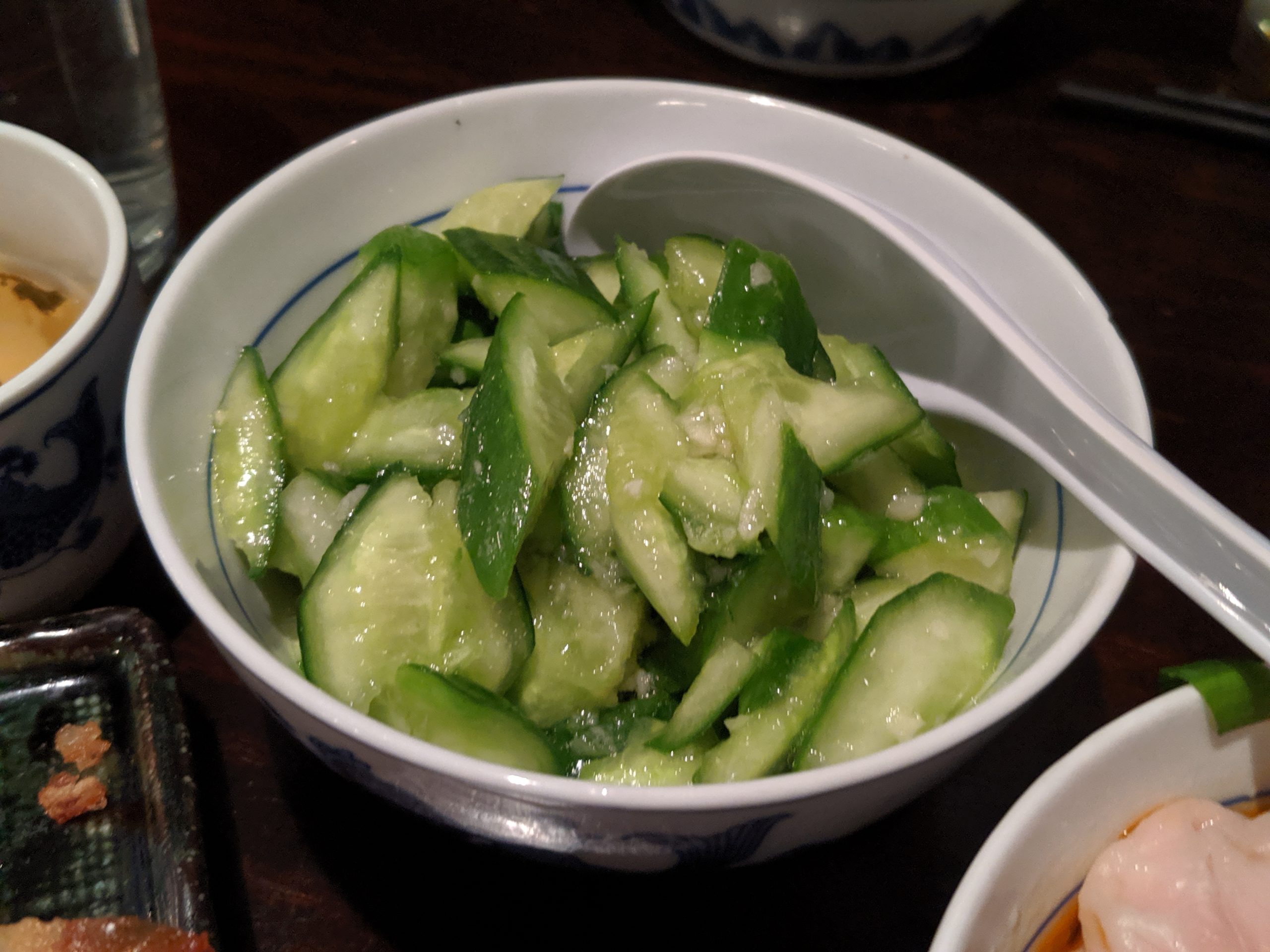 Yes, we ordered a lot but we didn’t skip out on the vegetables. The baby cucumber in garlic sauce was a refreshing palate cleanser amongst all the spicy meat dishes. I think we ordered a bok choy that somehow escaped my ravenous Pixel 3. Whether it was a hallucination or a dish we really ate, I was quite satisfied with the greens at Cafe China. 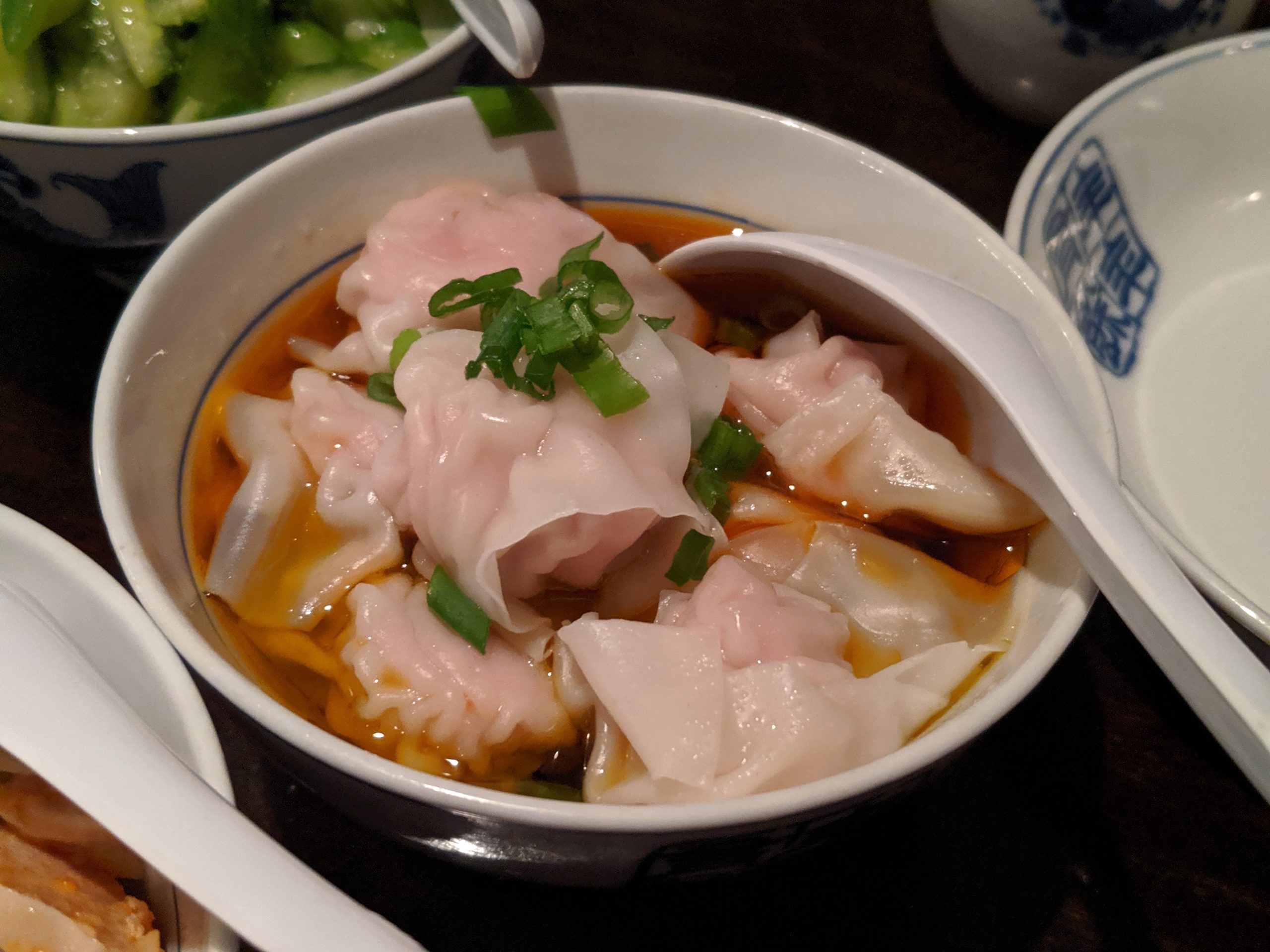 Lastly, we had to get dumplings. I think my Chinese food exploration took a gigantic nose dive once I discovered dim sum dumplings. These delicate pops of flavor never seem to get old for me, nor do I get to full from them. If I came to Cafe China and found out this was all they had on the menu, I would get myself nice and comfy for the next hour and put a hurt on their dumpling supply.

Now this might seem like another two thumbs enthusiastic review but look, a freaking food tv producer who has been in the biz for 20 years gave this spot her stamp of approval and did all the ordering , so take notes. I still think Los Angeles offers Chinese eats that takes the cake but in the city that never sleeps, Cafe China is doing it legit and in the heart of Manhattan. Pricey but fair considering the quality of food, the depth of selection, the real estate and you can order a 18 year Macallan scotch to wash it all down with.

producer’s correction: the snow pea shoots with garlic were served not the bok choy and the dumpling of the meal was the Spicy Chengdu Wonton – a must have! 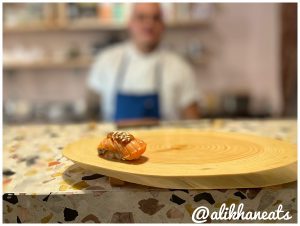 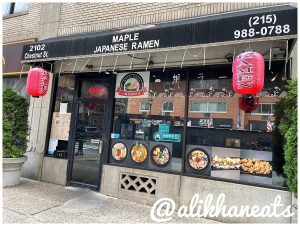 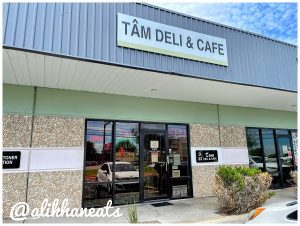