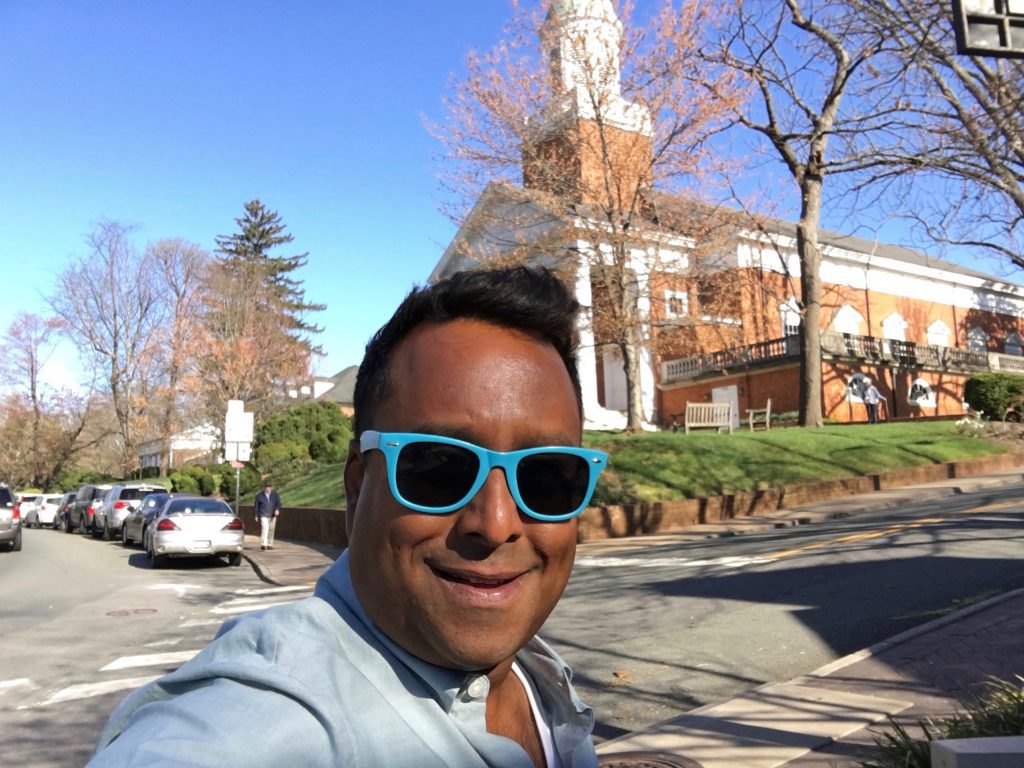 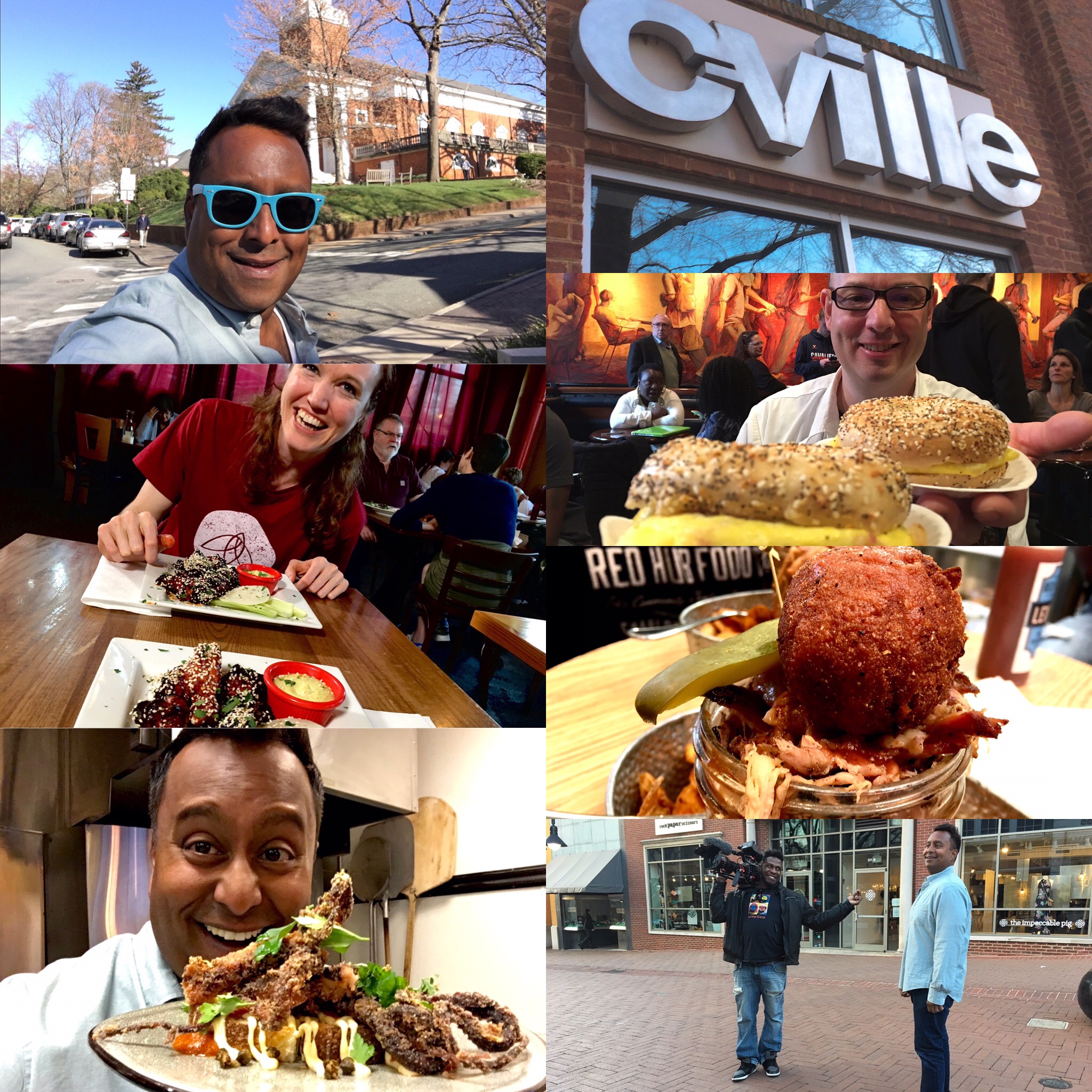 Ahh, Charlottesville. Or “Cville” if you are a local. Or just loco for the UVA Cavaliers. This quaint East Coast college town might seem timeless thanks to the Jeffersonian architecture of the University of Virginia’s campus but the food scene is very much in the 21st century. This episode of Cheap Eats starts off with familiar enough territory at Bodo’s Bagels. And let’s face it, what college kid didn’t survive off the occasional bagel? But Cheap Eats also found familiar comfort food turned sideways like Korean Hot Wings, a BBQ Sundae and Chicken Fried Octopus. Now before I get in trouble with the italics police for overuse and abuse, let’s take a big bite into Cheap Eats Cville . . . oops. I didn’t mean that italics police officer. Can you maybe just let me off with a warning? Please? 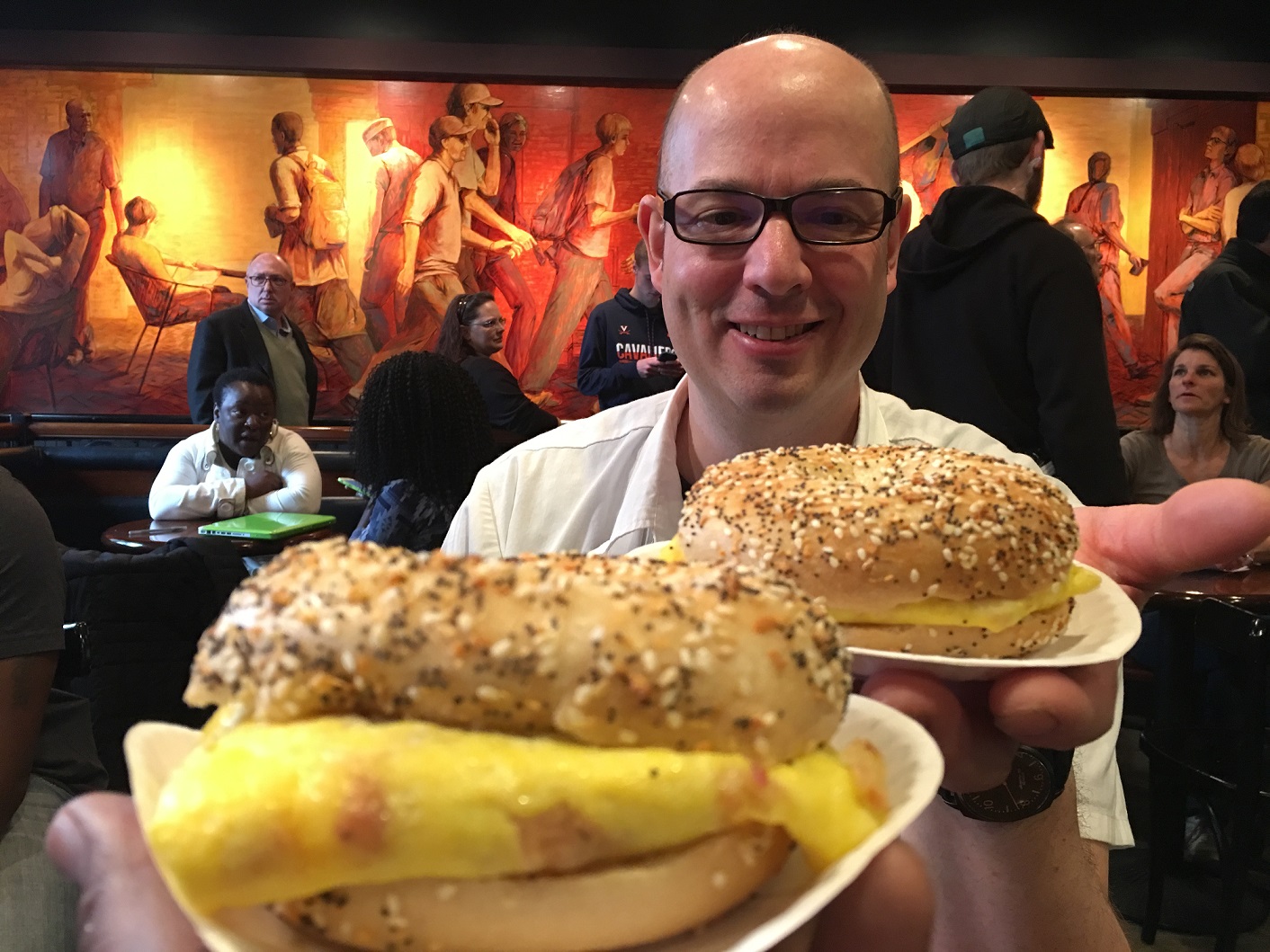 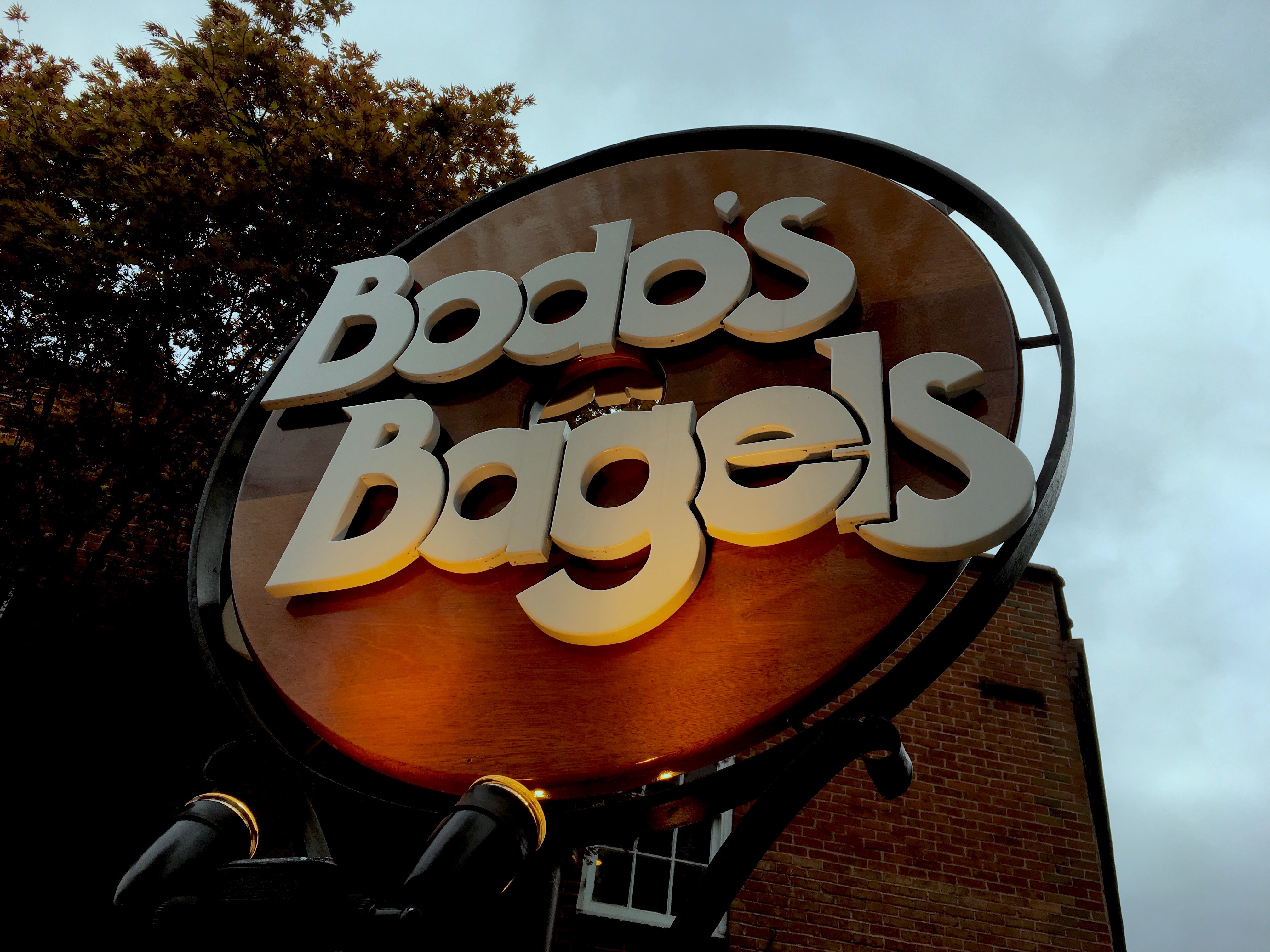 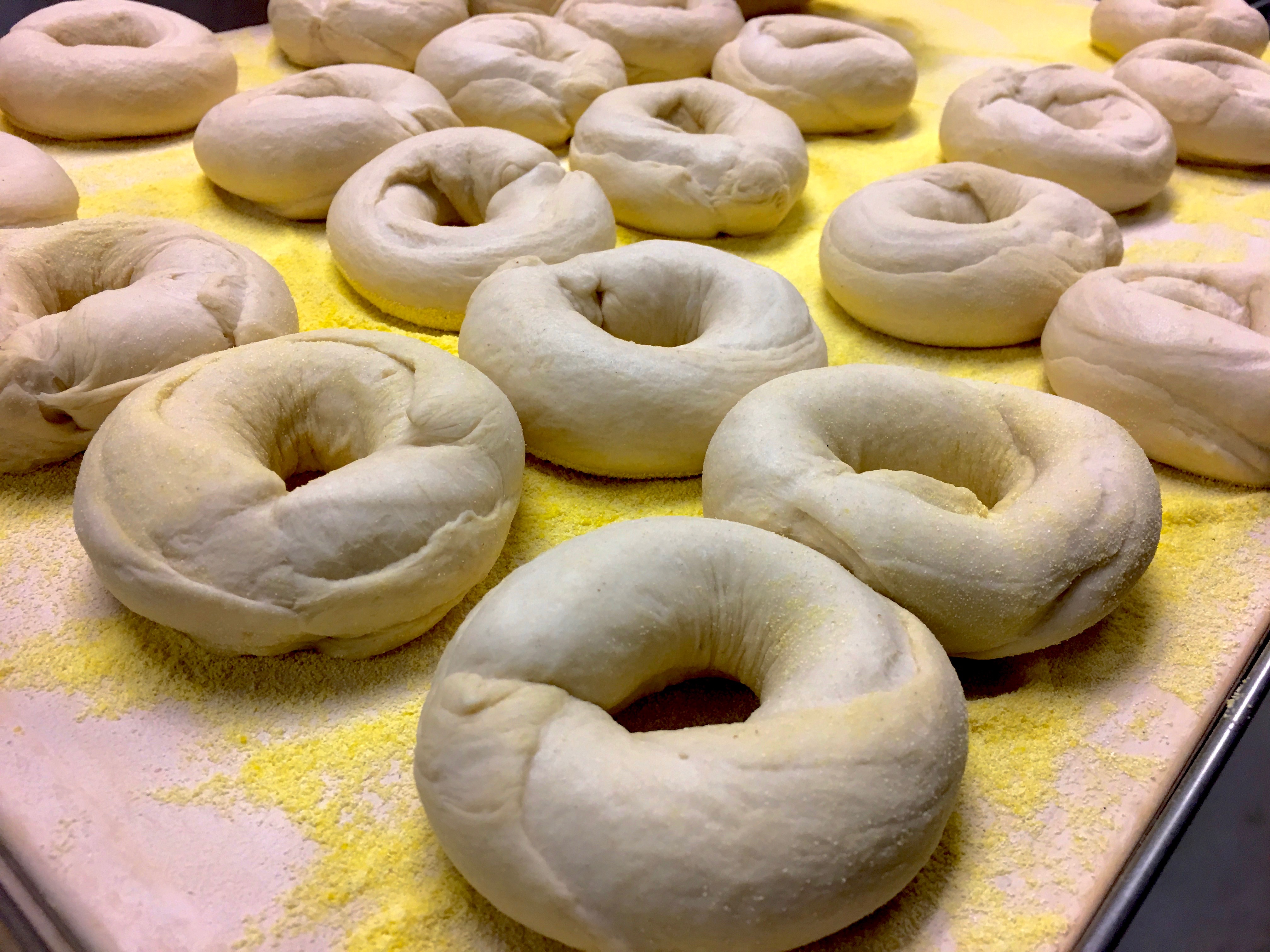 To the Cville local, Bodo’s Bagels is indeed a Charlottesville institution. To the Charlottesville visitor this multi location bagel operation is as NYC as you are gonna get in Virginia. Bodo’s bagels are water bagels: meaning they are boiled before baking which has been tradition since this humble bread’s beginnings in Poland back in the 17th century. On the surface getting a good bagel shouldn’t be a big deal because they are, until lox gets involved, a true cheap eat. Until you take into account the shelf life, which is short unless you forgo the process of boiling then baking and use a steam baking method. The result is a supermarket bagel that yields a longer shelf life and by far more disappointment in the flavor department. That whole mass produced food thing has a way of letting you and me down. Which then explains the long lines at Bodo’s – it takes effort to make bagels from scratch everyday but the taste is clearly unmistakable. Being breakfast and me being Ali Khan, you knew I had to get some animal protein in there and you really can’t cover your bases more in the animal protein department then pastrami, corned beef, ham, capicola and salami. For the record, I realize that this is a seriously un Kosher move to put on a bagel but considering I grew up in a Muslim American household where pork was shunned, well, you really shouldn’t be surprised that I like to flip the script. And for $3.30? At that price I would have taken one plain and BYO some cream cheese. 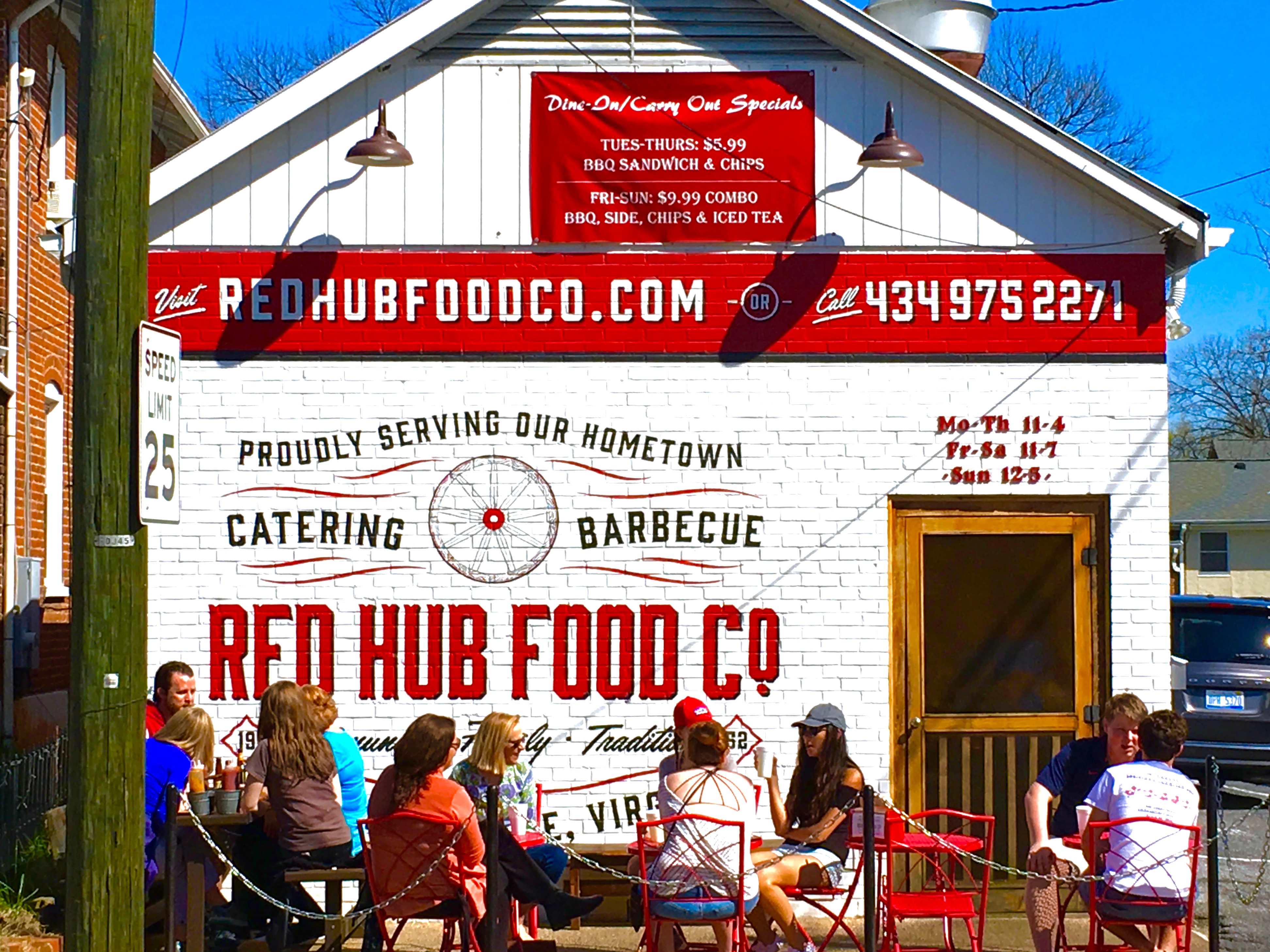 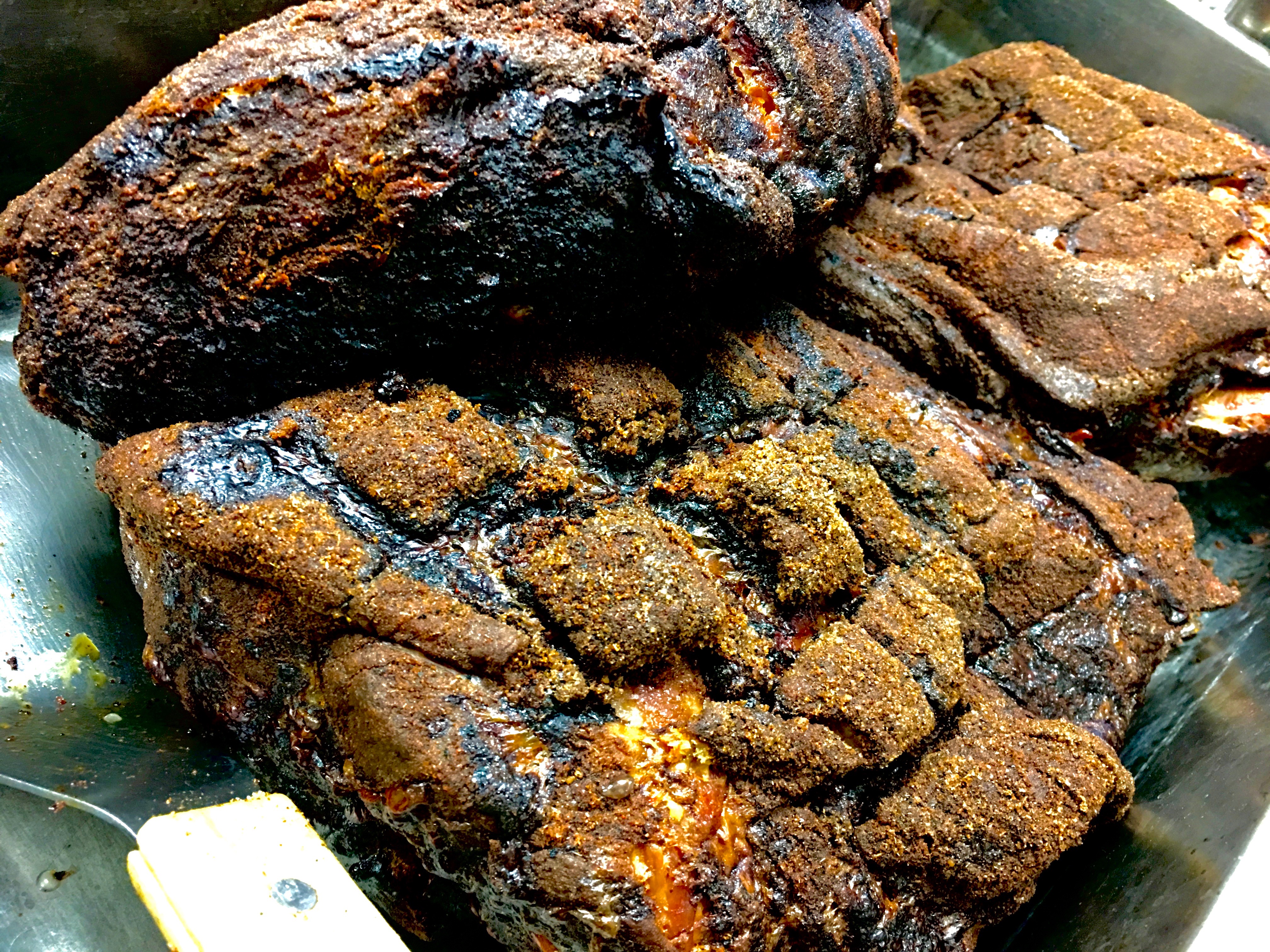 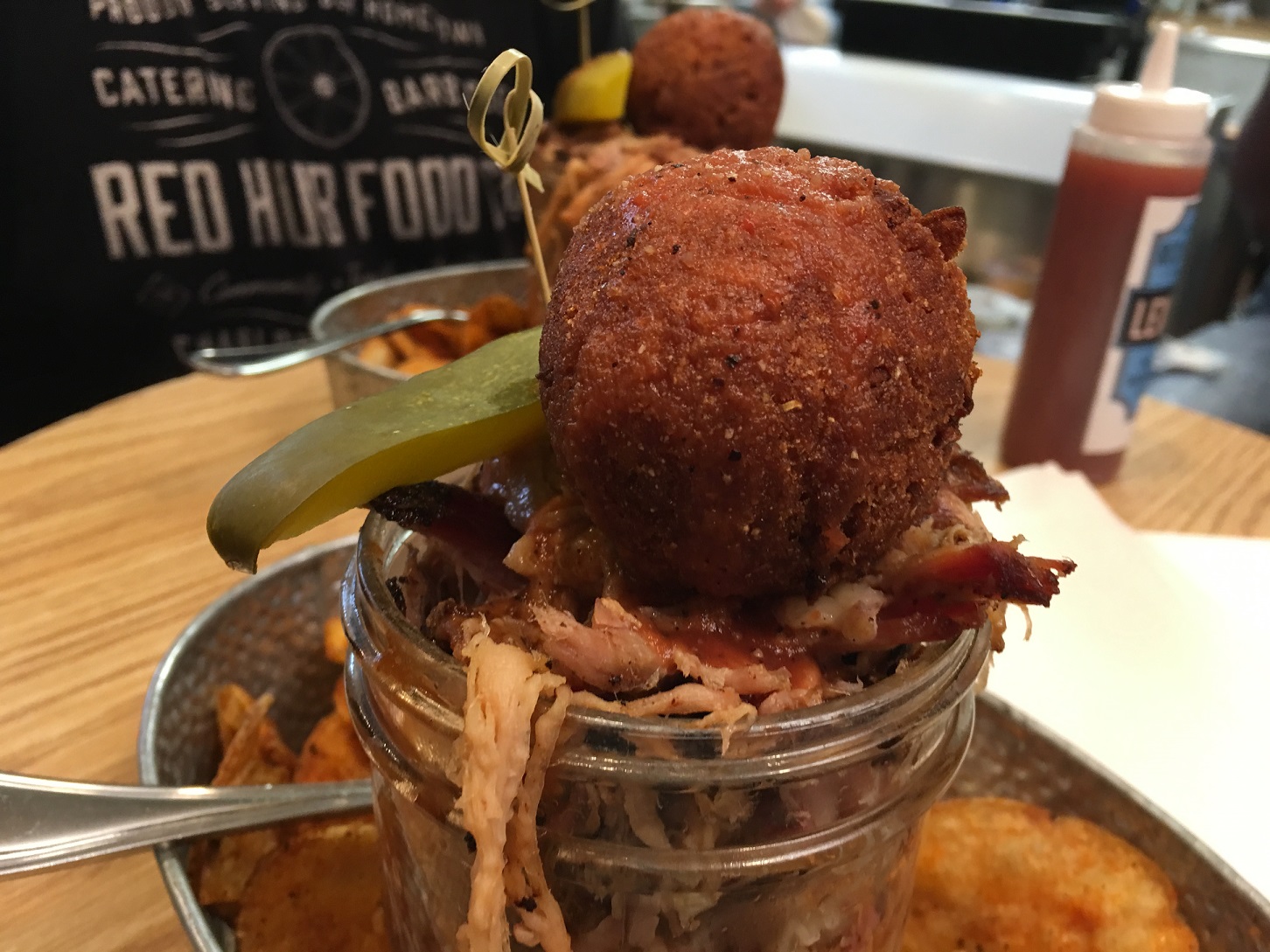 Among the genres of American cuisine, barbecue stands out as the most beloved, really the most American type of food there is. Yet despite having 50 states and thousands of miles that stretch from one coast to another, there really isn’t that many styles of barbecue in America. Texas has it’s brisket, KC has its sauce drenched beef and pork options, there’s Alabama and her famous white sauce, South Carolina contributes with a mustard based BBQ sauce, Memphis signs off with dry rub ribs and then there is North Carolina with their pulled pork. Not to be remiss about the tri tip out west nor Georgia and Florida’s affinity with a good pig picking, it is that North Carolina style BBQ that I wish to really land on. See, my man Ryan Hubbard has kin from NC and that is why his pulled pork tastes legit. Truth is Virginia as a whole doesn’t have its own BBQ style but the beauty of that is they need not be held back by years of tradition and the culture of do’s and do not’s that come with it. In fact this is ground where smoked meats and free thinking can thrive. Enter BBQ gone vertical aka the Barbecue Sundae; clearly something from Ryan Hubbard’s imagination which speaks to the fact that in Cville, BBQ is left to be defined by any who dare light a smoker. Starting with baked beans as its base, the Sundae is then layered with finely chopped coleslaw mixed with hot sauce and bbq sauce, 14 hour smoked pulled pork, and a hush puppy on top. While meat always remains the focus when one talks BBQ, you are quickly reminded that you are in the South when your sides evoke the grand Southern cookery that is soul food. A good hush puppy is a great find, a good hush puppy with legit pulled pork will have you whistling dixie on the 4th of July. For $8 my friends, Red Hub Food Co is a must stop in Charlottesville. 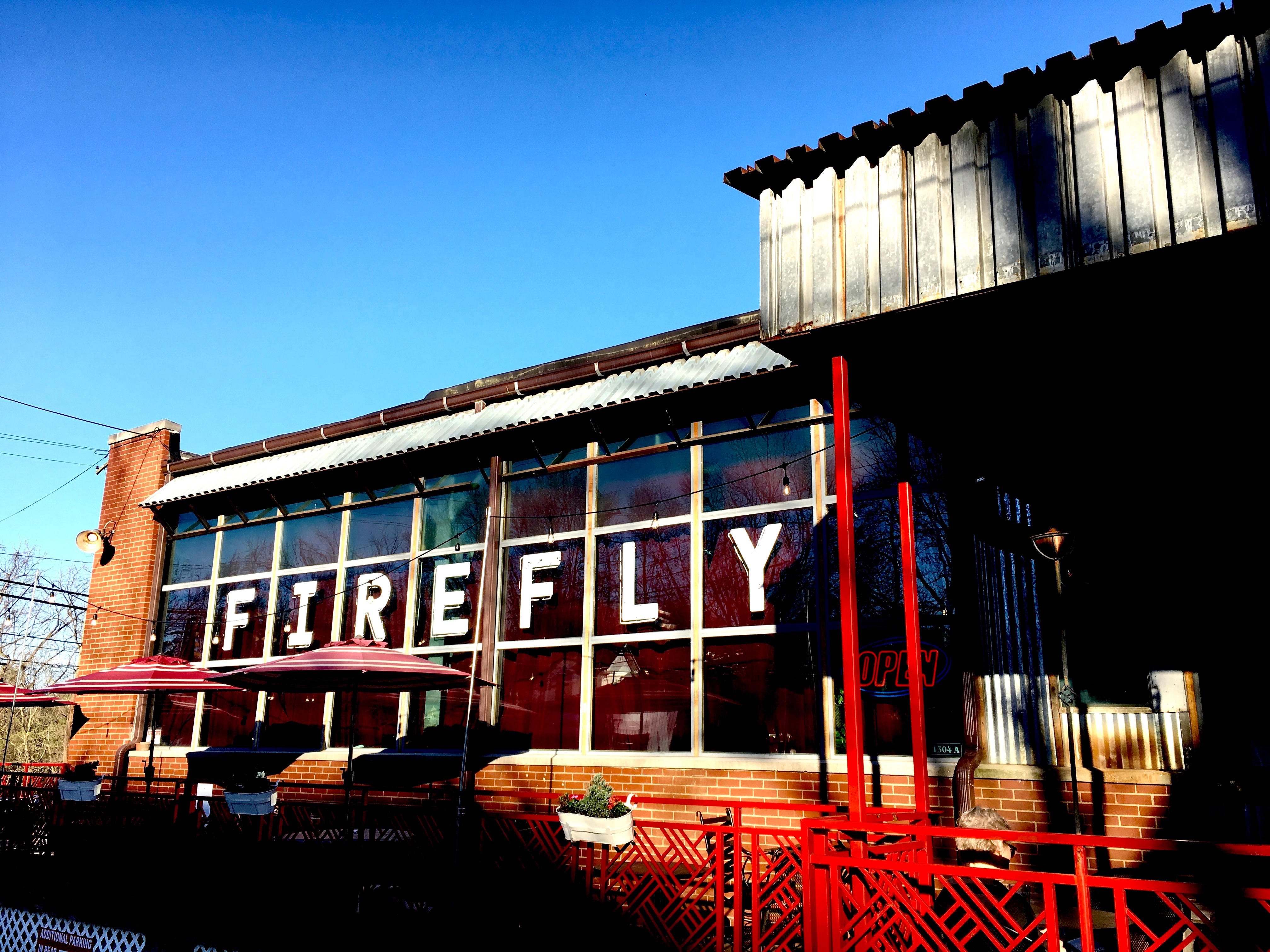 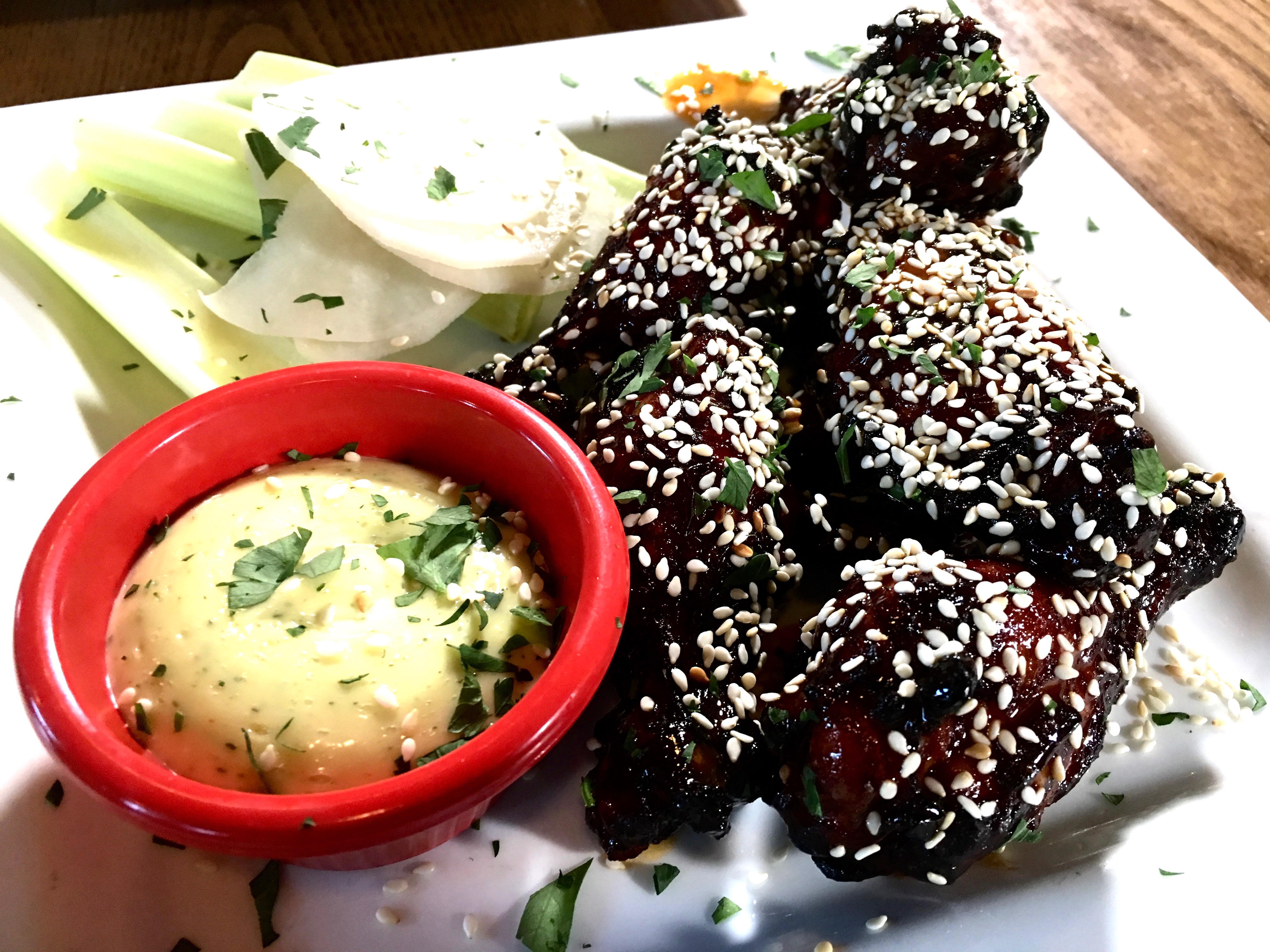 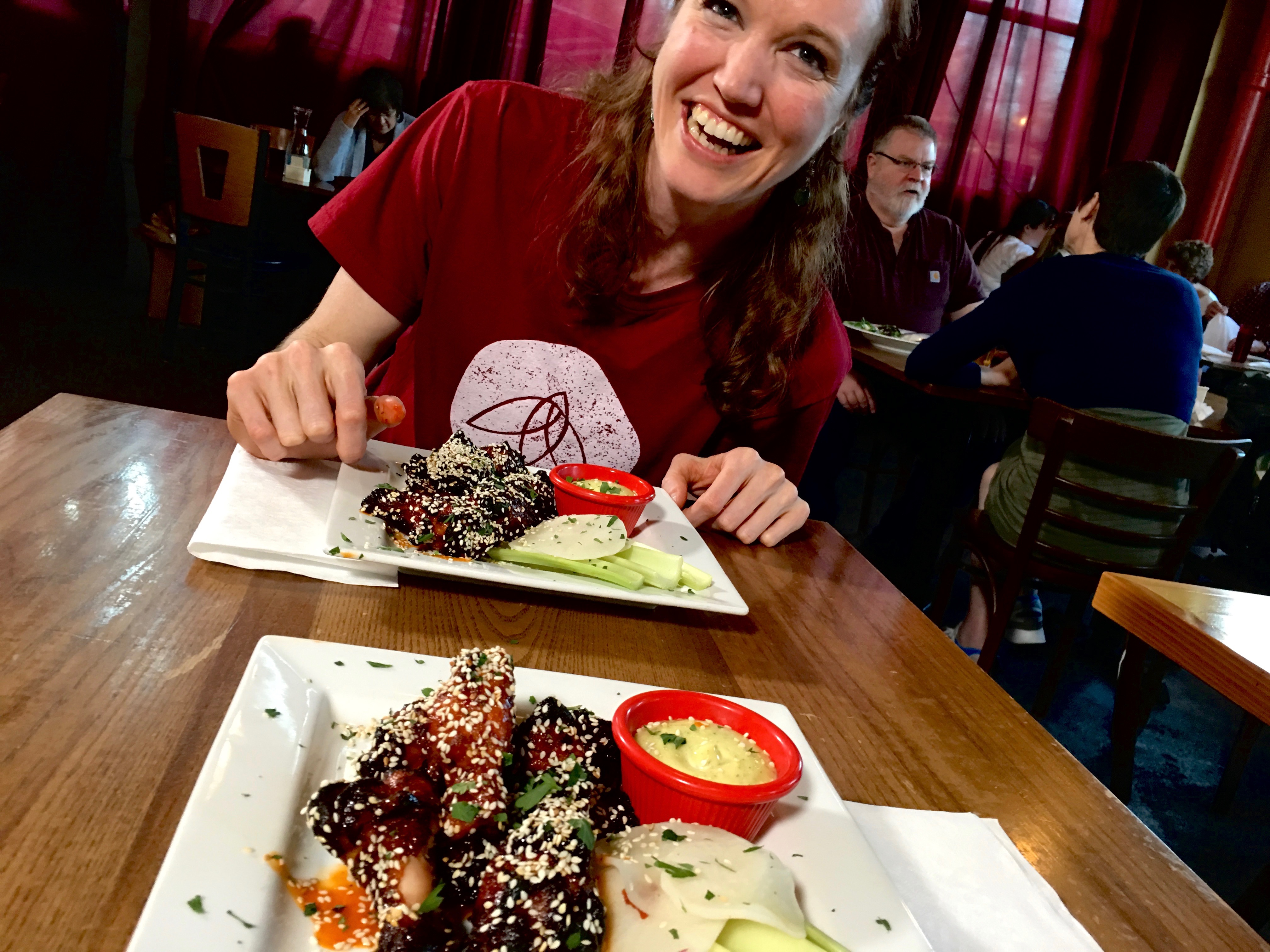 Firefly is a dream really. For foodies with young ones in tow(like myself) the dream is to go get great food in an environment that can appease a 5 year old on a sugar rush. But there are indeed bigger dreams than that. Opening up a place like Firefly was a dream of Mark Weber and Melissa Meece. The dream became reality in November of 2014 but sadly Mark was diagnosed with and eventually succumbed to cancer in January of the following year, but not before getting to see Firefly, his dream, open. After losing her partner, one would not have been surprised to see Melissa let the place go, but she stayed and took it on herself despite having no culinary experience. Drive and a dream can go a long way. All the way to Korea apparently because I scored some epic wings doused in that epic Korean sauce we came to learn about last season at Dooby’s in Baltimore: gochujang sauce aka g sauce. Even if you haven’t been initiated into the world of Korean Fried Chicken, let me tell you that the strong, assertive flavor profiles of Korean cookery do well with chicken. For you wing traditionalists out there who cry “give me Buffalo wings or give me death” I say that if it is heat and acidity you are looking for, give the Korean wings at Firefly a try. Cheap Eats that also doubles as a living memory to a food lovers dream? I’ll take that as my snack any day of the week. 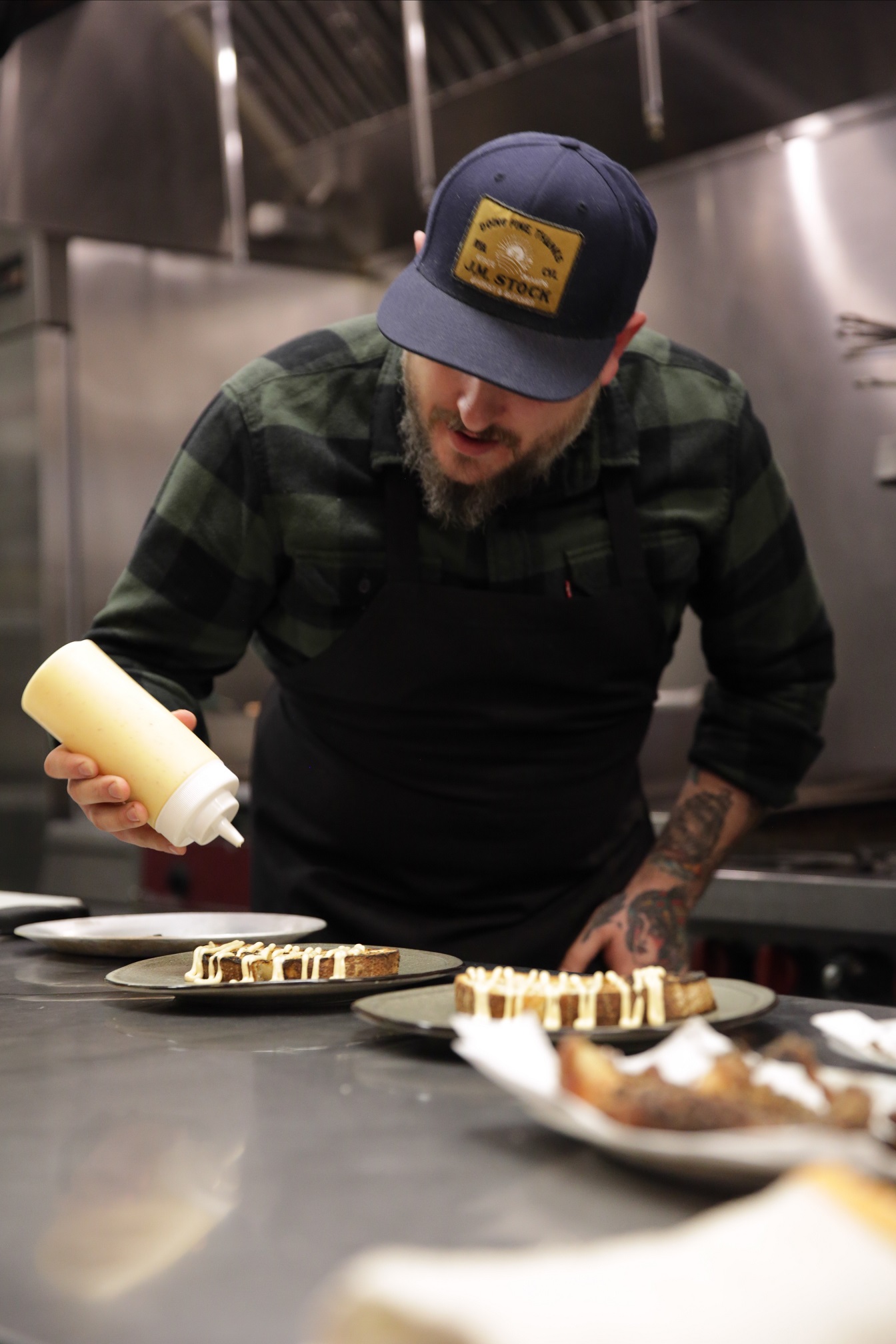 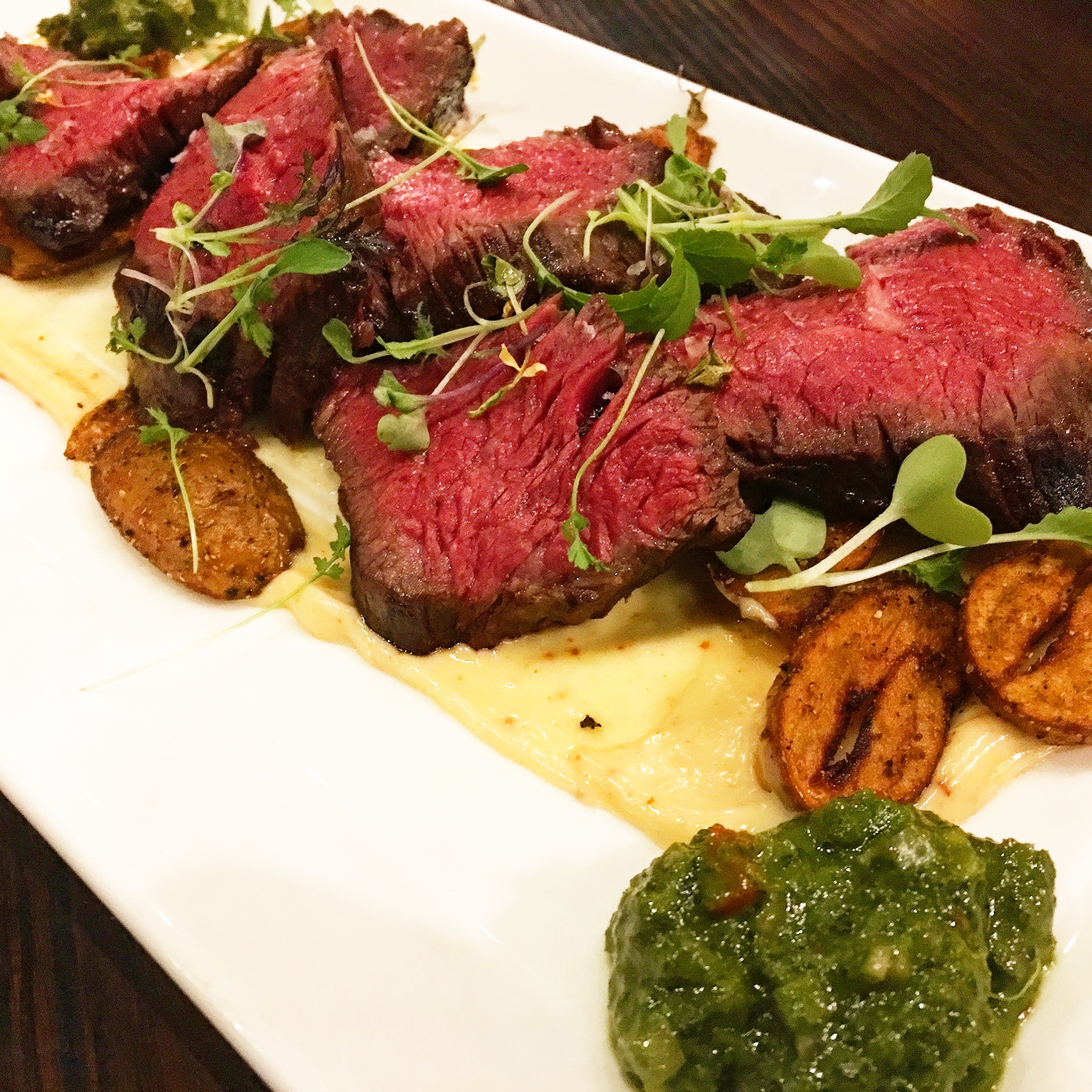 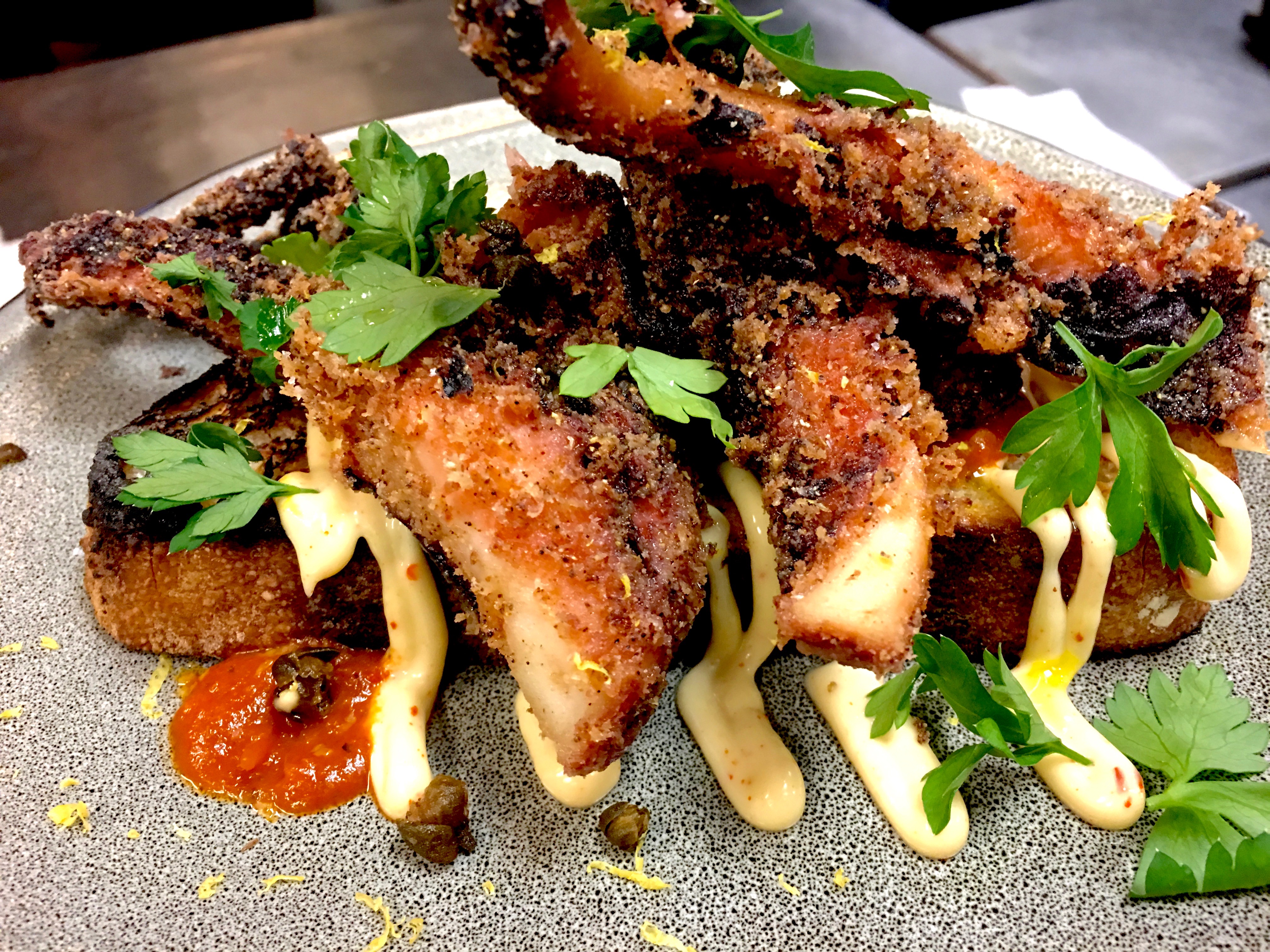 The Vitals:
the spot: Oakhart Social 511 W. Main St. Charlottesville VA 22903
the eats:  Open faced Chicken Fried Octopus Sando
the bucks: $15
the full nelson:  one of the best bang for buck dinners Cheap Eats has ever had

Truth be told I’m a gourmand at heart. But the realities of my pocket book coupled with the wealth of culinary innovation and tradition in the world of street, comfort and ethnic foods keeps me very sated. Still, when we squeeze in something fancy on Cheap Eats, well, I am very glad to do so – at the very least realize that variety is the spice of life. Enter the world of chicken fried octopus, something that can make hairs stand on end among many – heck try butchering an octopus like we did on the show! Shocking to some, exotic to others, foods like this are why many go out to white table cloth restaurants: new experiences and challenges to one’s palate. New experiences to me should warrant a $15 entrée but let’s discuss for a moment the idea of “challenging one’s palate”. Using myself as an example I can tell you that, more often than not, at a nice restaurant, my eyes gaze at the red meat selection and if you simply gaze up in this post you can see I tried a fantastic steak at Oakhart Social on another visit. Yet when I am drawn out of my habit and venture into the world of hand made pastas, local seafood or in this case Chicken Fried Octopus, well, you just might be surprised. There is no guarantee when one challenges their palate that you are going to enjoy the Camembert as much as the Vermont Cheddar but when you are rewarded with a new experience that you really love, well that is the excitement of dining out to a T. Oh and that Octopus was one of the best Cheap Eats dinners I have had. Buttery, tender and dressed to the 9s with sauce. Yeah, this ain’t the kinda food you make at home, it is the kinda food you go out for.

And that is a wrap Cville! For a college town there is no doubt this food scene has both feet planted in the farm to table, innovative foodie trends of the 21st century. And thanks to some rock bottom priced bagels, one can stay and eat all day in Charlottesville so good looking out Bodo’s!