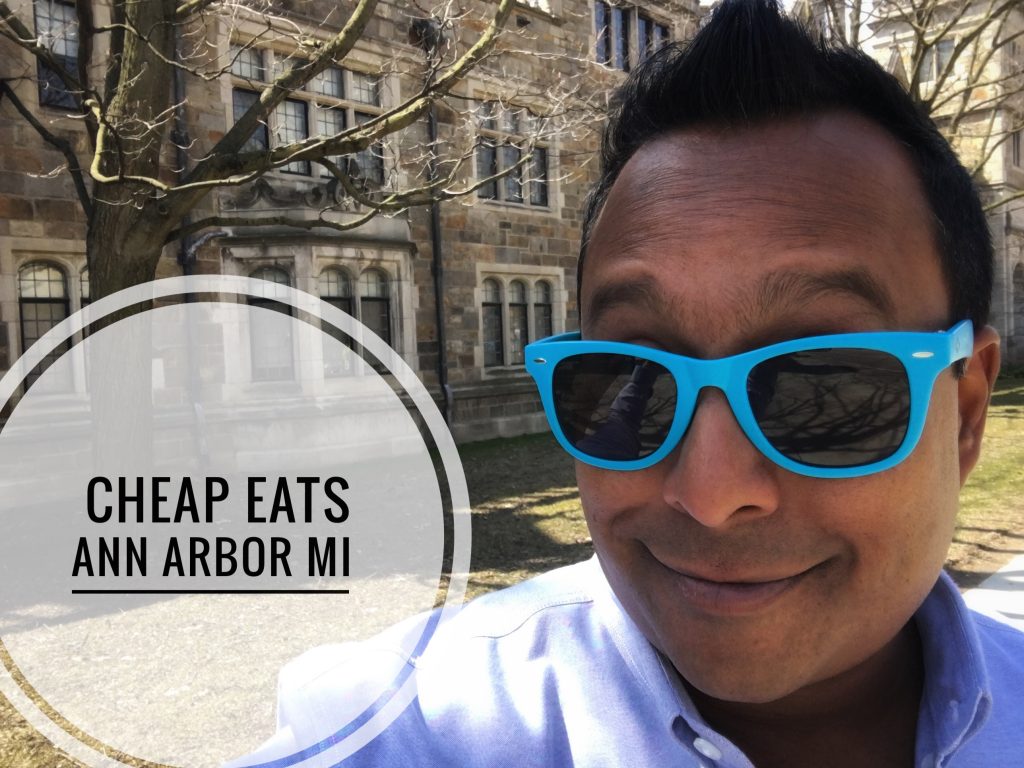 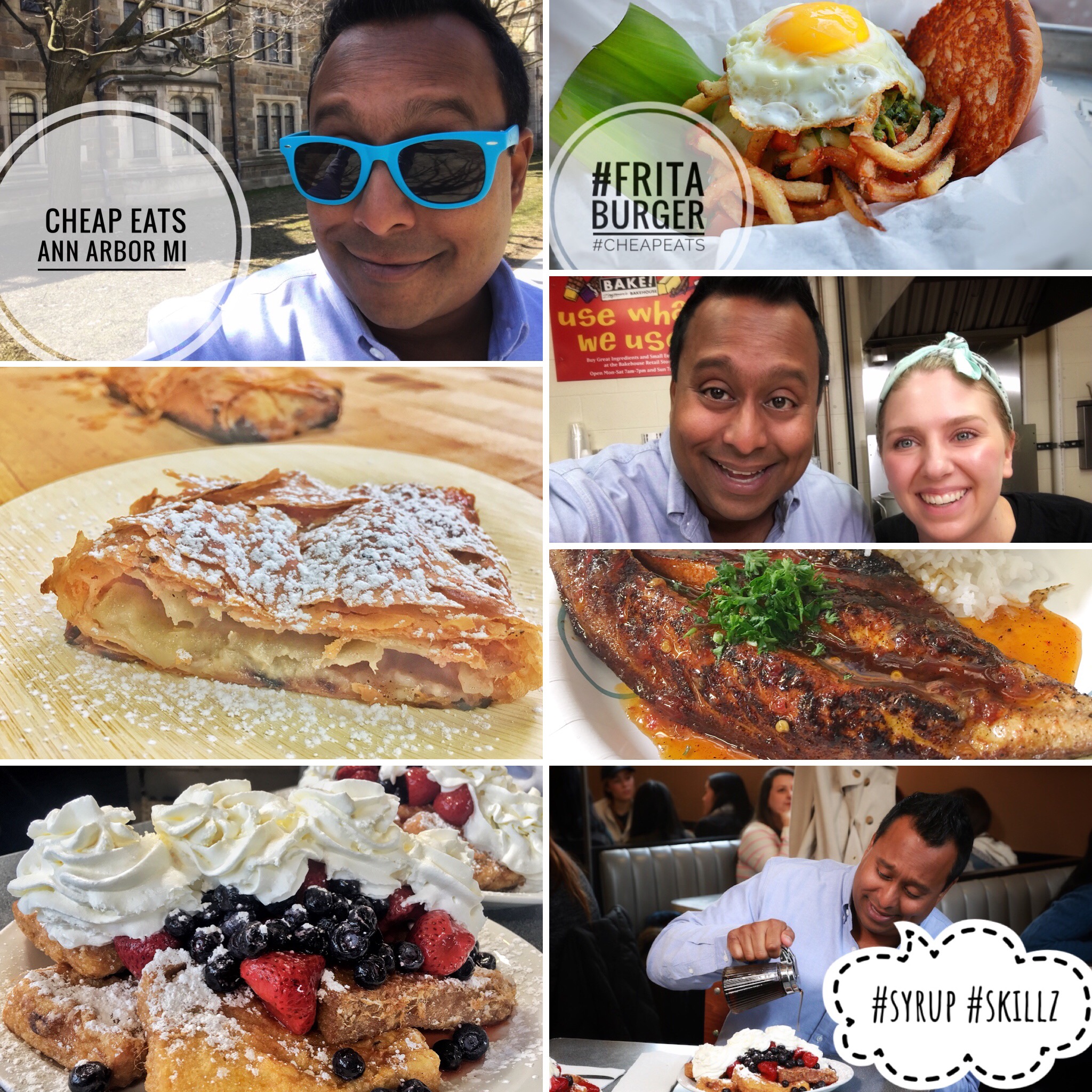 Michigan is fast becoming a fav state to visit and Cheap Eats Ann Arbor may have been the icing on the cupcake. After getting wowed back in 2016 when Cheap Eats visited Grand Rapids and then experiencing the revitalization of Motor City a year later when Cheap Eats visited Detroit, I have been riding high on a wave of solid Michigan eats for a couple years now. Enter Cheap Eats Ann Arbor, Michigan’s answer to college town eats and let me tell you . . . if this is what college kids eat these days, call me Rodney Dangerfield and send me Back to School, cuz up and down the Cheap Eats in Ann Arbor are really just Good Eats . . . minus the Alton Brown of course. So buckle up, Go Blue(even if you’re a Buckeye fan) and take another bite out of Cheap Eats Ann Arbor! 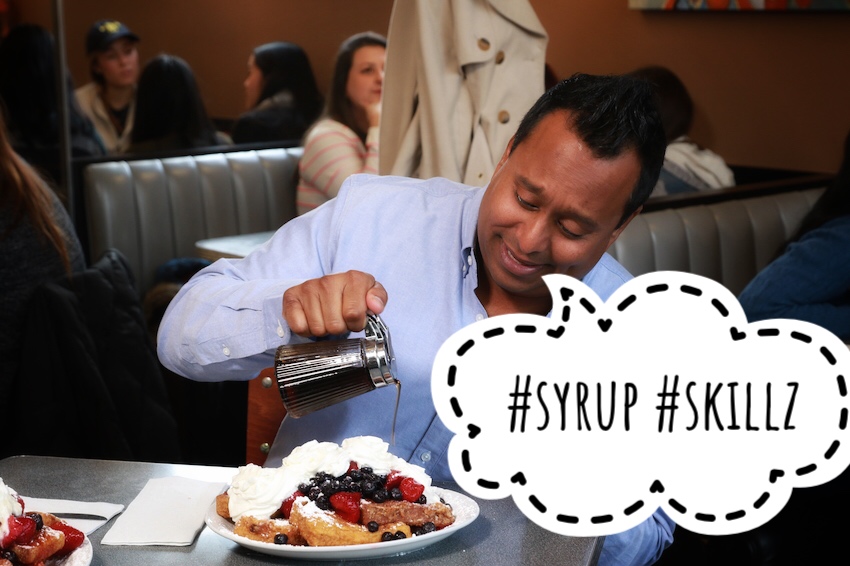 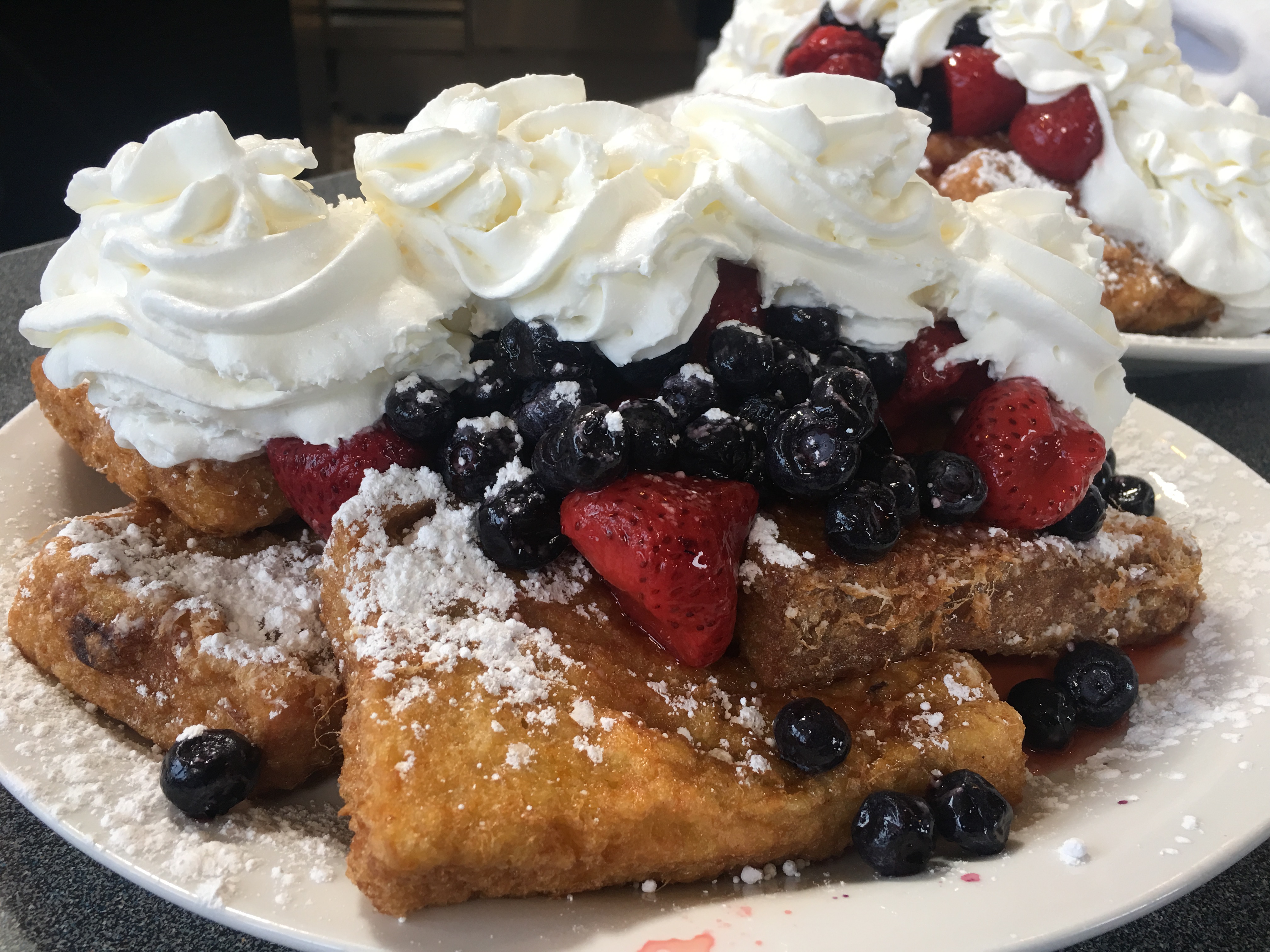 After wrapping up a weeknight dinner at home, my 6 year old thanked me for making him salmon because “salmon is brain food and it will help me learn at school”. If only this age was forever. I suppose there are more than a few research papers out there to support my kid’s theory, perhaps a few might have been written in Ann Arbor by a student at the University of Michigan. Which leads me to believe that if salmon is brain food, then surely the deep fried French toast served at Angelo’s is as well, because that’s what the kids at U of Michigan are eating while writing these papers.

Angelo’s is a beloved Ann Arbor institution and it is easy to see why: a diner serving great food for decades at prices that seem to hardly reflect that passing of time. What will no doubt grab everyones attention is the fact that the French Toast is deep fried, which gives it a wonderful crunch that can stand up to the heavy onslaught of syrup, whipped cream and fresh berry topping. But an important element here is that the bread is made in house and there are not many diners going through all that trouble. I say “trouble” but what it really means is a lot of hard work and I saw that first hand while watching second generation owner Steve Vangelatos make that bread.

Everyone loves a good diner but working in one is a grind. Pushing out orders at high volume, knowing that the profit margins are slim ain’t for the soft hearted. But that’s exactly what Steve’s dad did when he started Angelo’s after immigrating from Greece back in 1956. His hard work, passed on to his son, has created an Ann Arbor legend of a diner. Angelo’s is as legit as it gets Cheap Eaters, so make sure this one is part of your Cheap Eats Ann Arbor experience. And getting a little brain food is just the cherry on Sundae. Or in this case, deep fried French Toast. 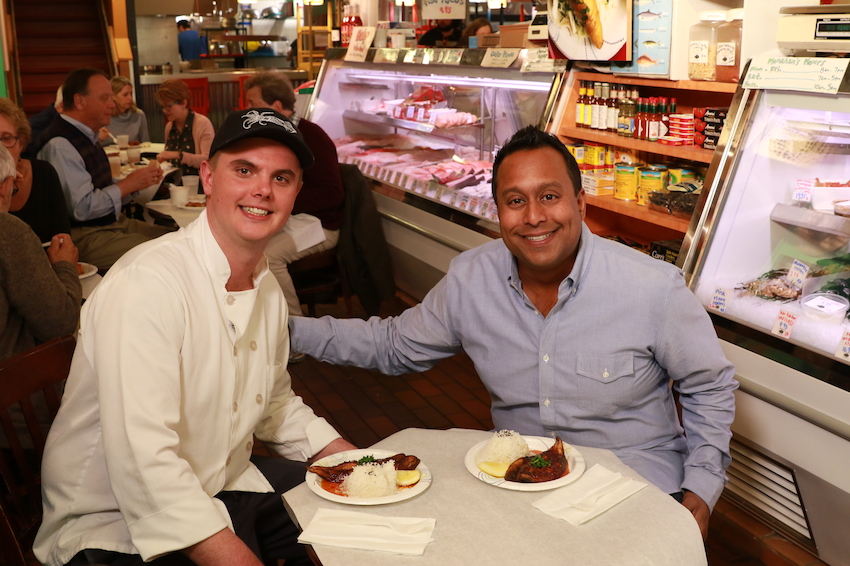 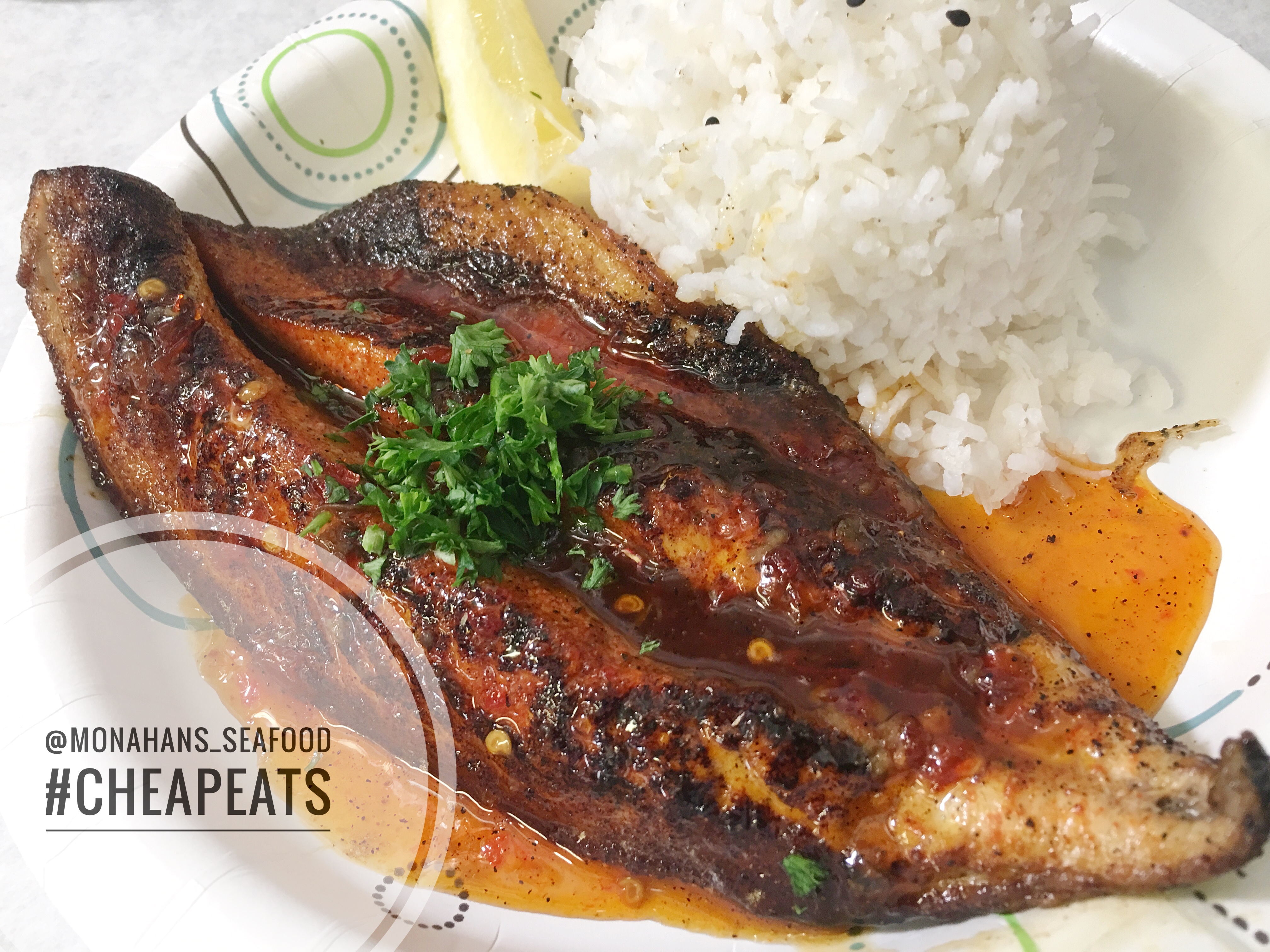 Monahan’s “Pick a fish” deal can stand on its own as worth making a trip to Ann Arbor for. Some of the reasons are obvious, like the fact that you are eating in a Farmer’s Market and you are ordering your meal at a seafood counter. But then take a peak at the goods underneath the glass at that counter. This seafood is top shelf my friends, to the tune of sashimi grade tuna at $40 a pound. Suddenly one realizes that the best ingredients in the whole world can be found anywhere, if you’re willing to pay for it.

Here’s a pro tip Cheap Eaters: if the place you’re at is selling top shelf seafood, chances are the cheaper fish is still going to be of that same quality. And it makes for a fine time to try meaty and oily fishes like mackerel because at this level of freshness, these specimens are hard to come by.

All that’s left now is cooking a fish like Mackerel just right. Meet Chef Justin Johnson, a graduate of the Culinary Institute of America, and head chef at Monahan’s. Justin likes to season Mackerel with aggressive flavors hence the use of a Cajun rub to blacken the fish before going full on Southeast Asian with a Thai chili sauce. On paper, or perhaps on salmon, this sounds like overkill but the oily Mackerel can take it.

And this wasn’t served on a bun either my friends . . . this was a full on entrée on a plate, a paper plate, but a plate nonetheless. Finding seafood of this caliber is a find in any city, let alone in Ann Arbor, Michigan. But as far as Cheap Eats goes, the only thing separating this meal from a $24 price tag was a bit of porcelain. Yeah, this plate is a deal on its own. Paper and all. 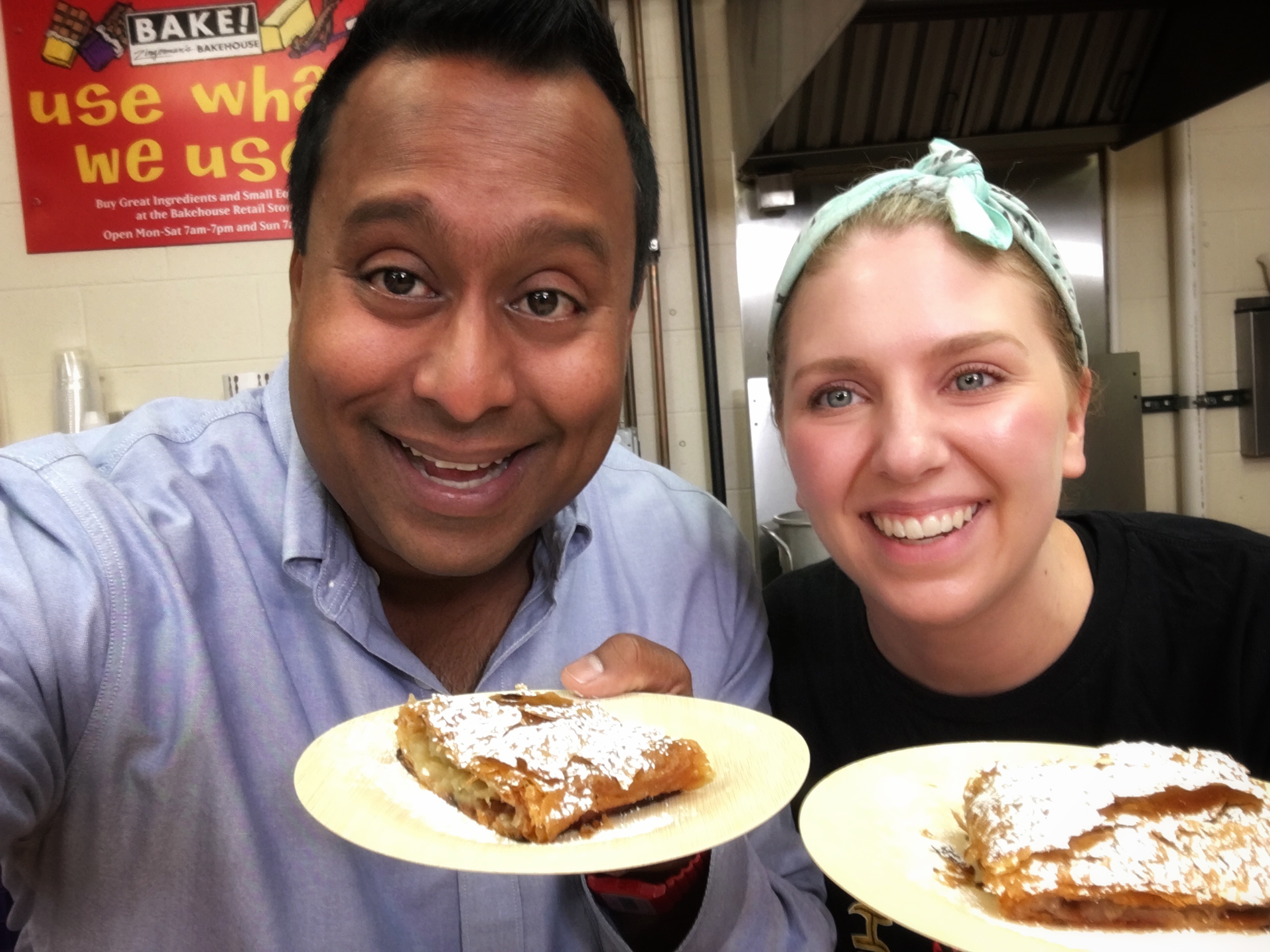 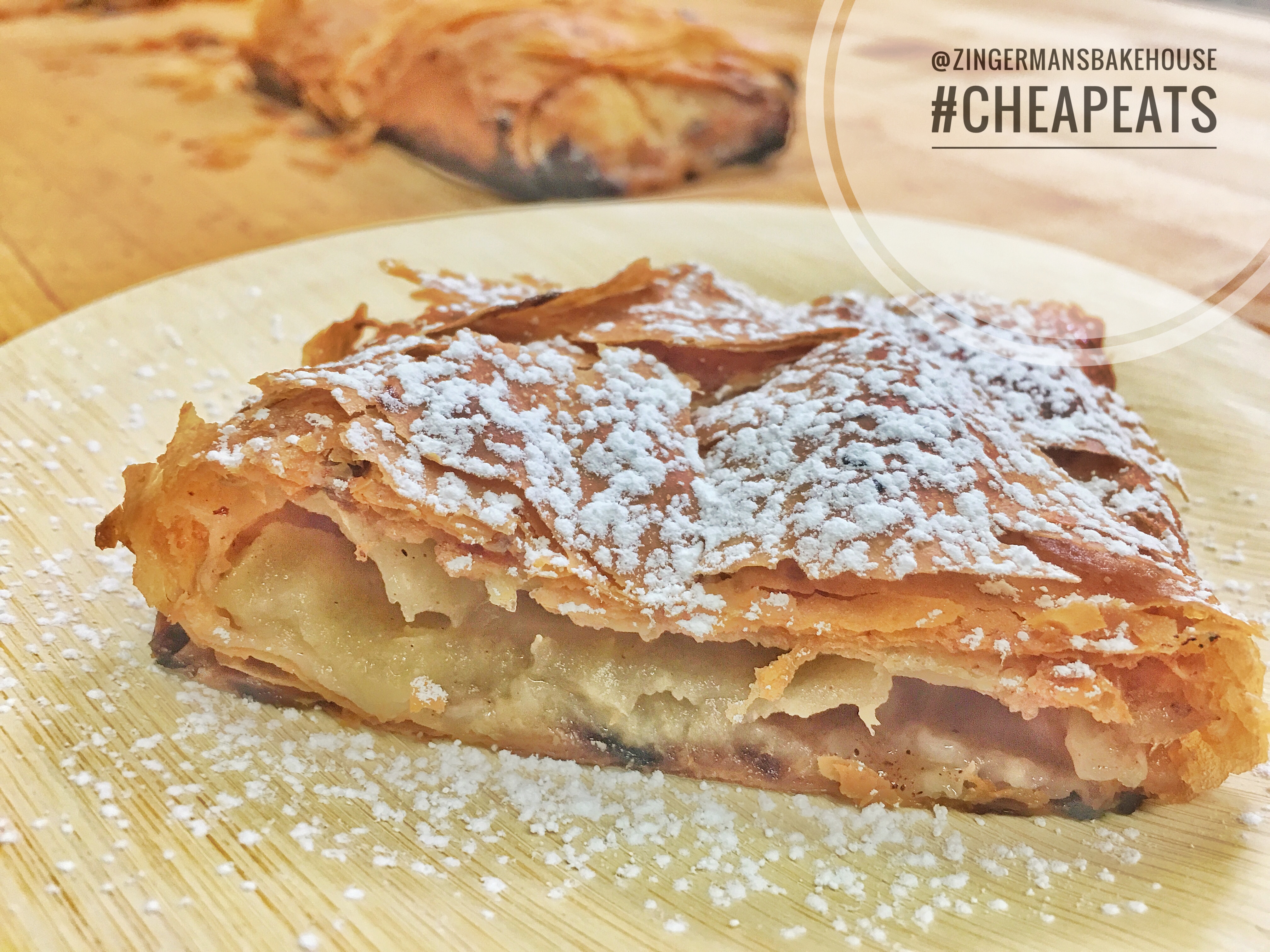 A wonderful by product of being a glutton is the opportunity to learn about new cultures through food, or at the very least, new words. At Zingerman’s, my new word was “Retes”(prounounced Ray-Tesh) which is Hungarian for strudel. As far as culture went, the one thing I most certainly walked away with from my Cheap Eats Ann Arbor snack session was that Hungarians know a thing or two about pastry. And so does Zingerman Bakehouse Head Pastry Chef and manager, Melissa Lesz.

With Hungarian in her blood(plus German and Polish), Melissa grew up baking with her grandparents. You could say Eastern European sweets were her version of baking chocolate chip cookies after school. But that wasn’t enough to satisfy her desire to master the craft as Melissa went on to Culinary school to become a full fledged pastry chef. After stints throughout Michigan, she landed at Zingerman’s and its clear she is at the right bakery. With a solid national reputation, it didn’t surprise me to find out that Zingerman’s sent Melissa, along with a few other bakers, to Hungary and Transylvania, to taste the goods and bring back some sweet tricks of the trade.

What does $3 bucks get you at Zingerman’s? The best apple s ,Rétes ever. The apples were Ida Reds, which are known for holding their flavor long after being picked and are favored for pies and applesauces. What I liked most about the Rétes was that  dominant butter flavor in the pastry. The apples held the seasoning well but did not carry too much acidity, which also allowed the richness of the pastry shine through. Yeah, you best make Zingerman’s Bakehouse a must stop for your Cheap Eats Ann Arbor snack fix. 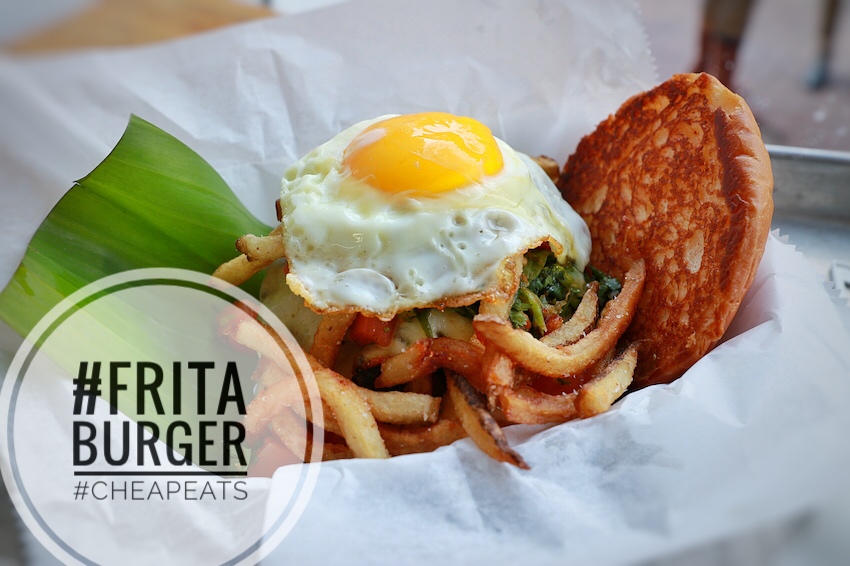 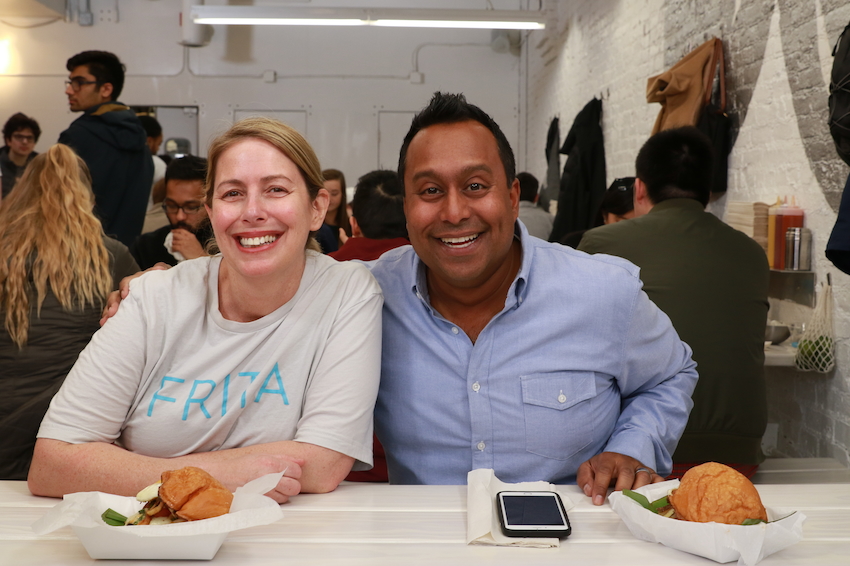 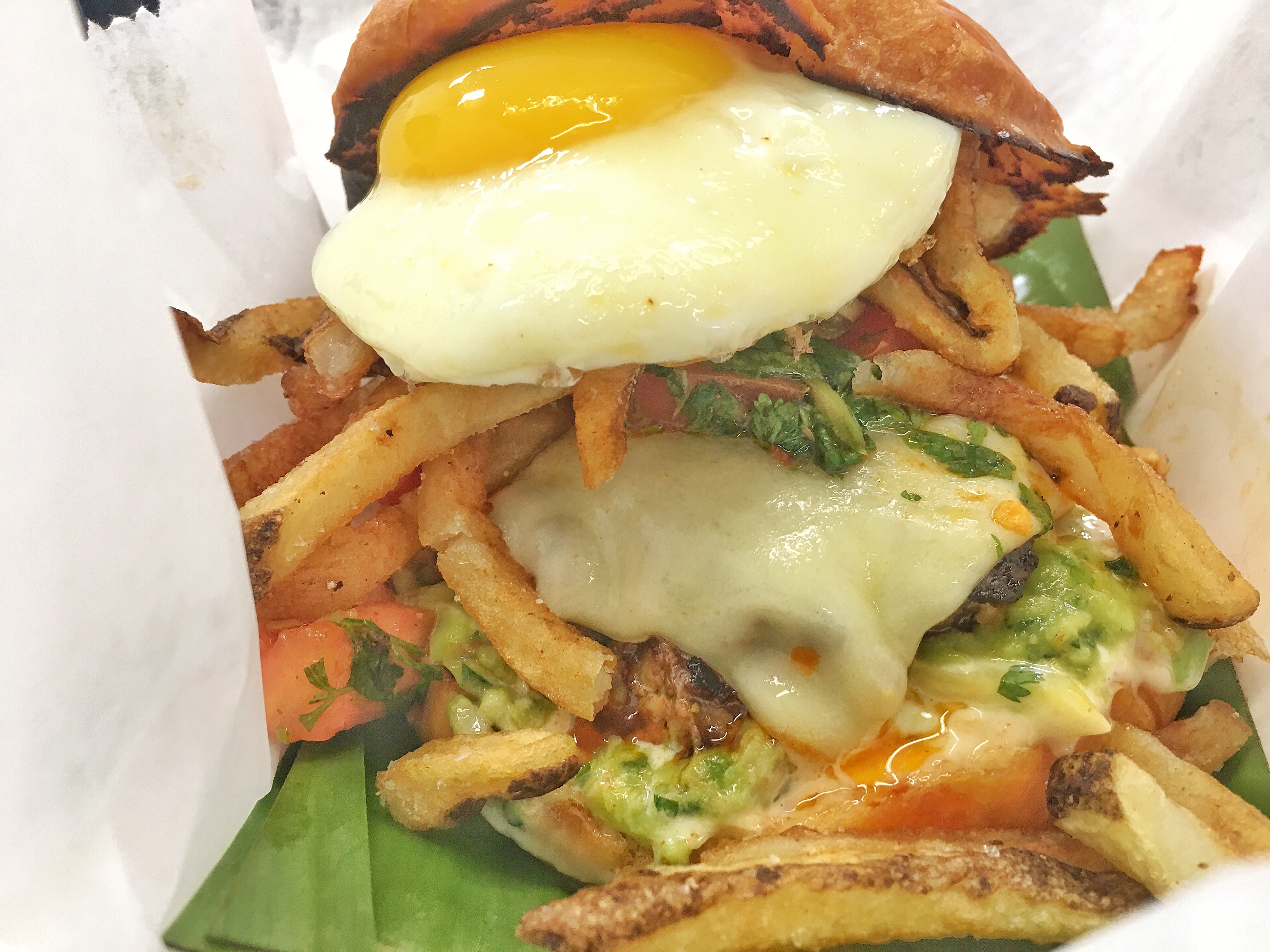 On paper, the Frita Loco is the kind of burger that gets me nervous. Yes, a 1/3 of the price is in toppings alone. But know that the sweetness of the mango and crunch from the cabbage make the tropical slaw a brilliant topping on a chorizo burger patty. The triple hit of fat from the egg yolk, the avocado and the Muenster cheese scream unabashed burger indulgence. And the fries on top of the burger, along with a killer bun make for a sandwich meal on the Primanti Bros level. Yes, this is a everything but the kitchen sink burger, but it all pairs perfectly with the concept of a well spiced pork sausage burger. You might not want to wear you best shirt at Frita Batidos when ordering the Frita Loco, but you would be crazy not to get one either.

Still you must be scratching your head on how a Miami burger style came to Ann Arbor Michigan. You have Chef Eve Aronoff to thank for that. Growing up on the East Coast and spending time down in Miami, Eve got a taste for the Cuban cooking. Add to that her training at the Cordon Bleu plus 25 years in the restaurant biz and well . . . anything is possible. Lucky for us it was priced just right for Cheap Eats Ann Arbor. 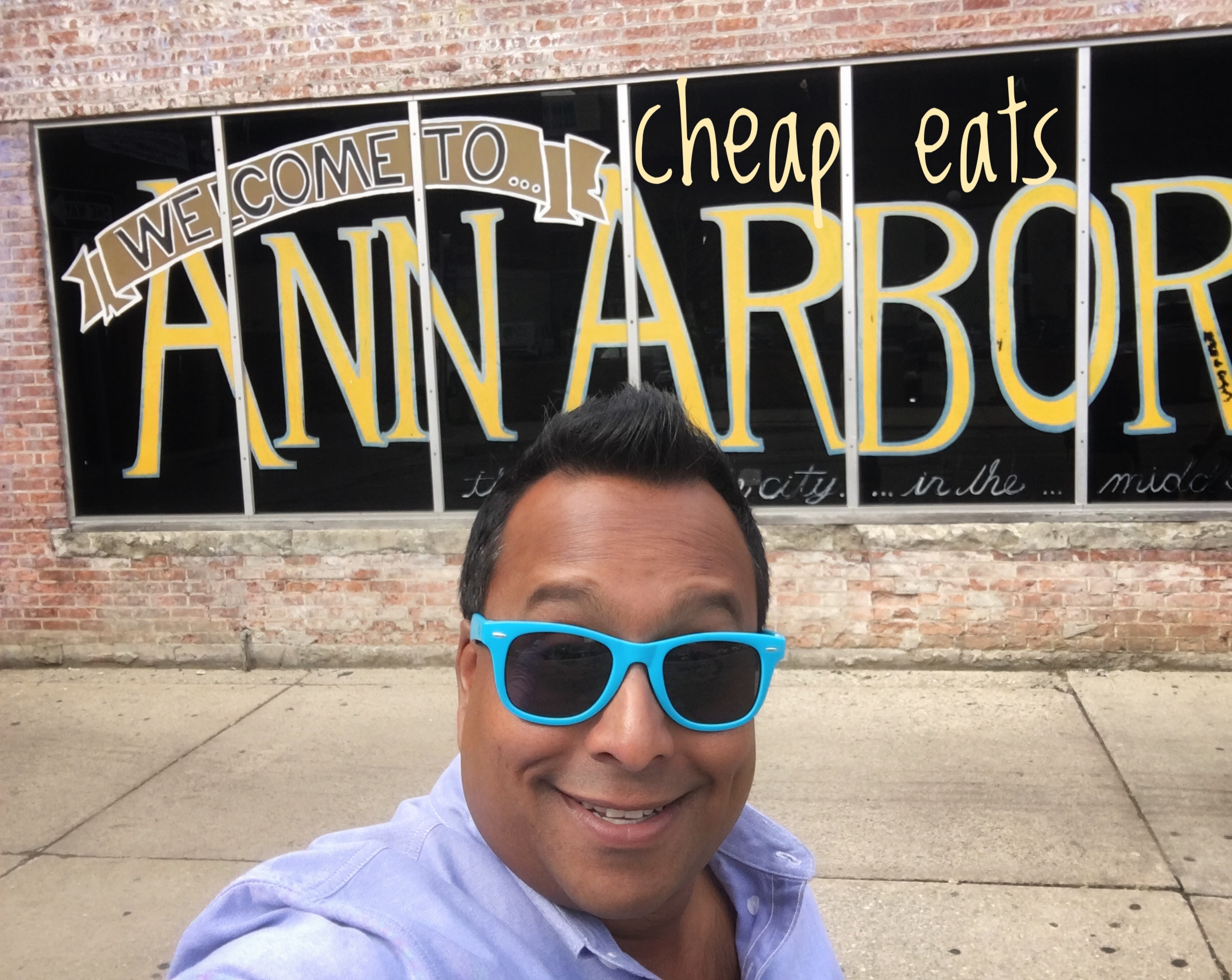 And that is all she wrote about Cheap Eats Ann Arbor! Michigan, you are 3 for 3 when it comes to Cheap Eats and all around great food. It being August and all, I’m dreaming about a little heat relief up north. So keep your eyes peeled Cheap Eaters; your boy in blue just might be yelling “Go Blue” on another round of Cheap Eats Ann Arbor! 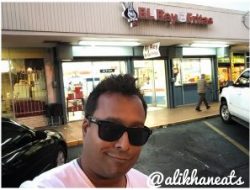