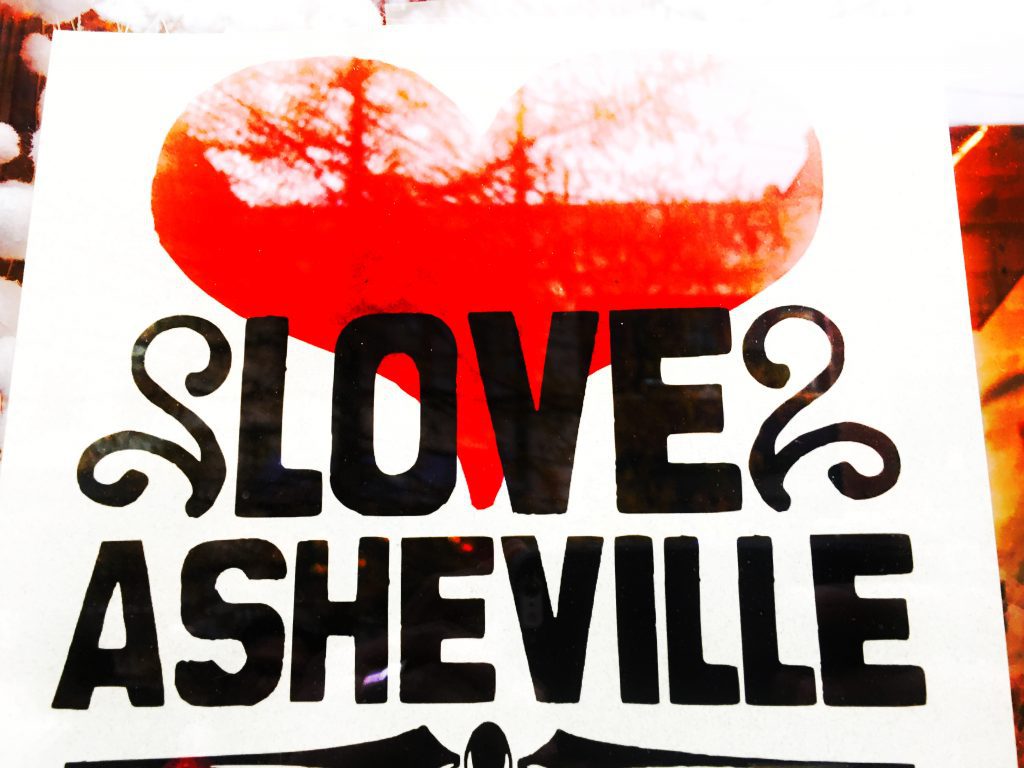 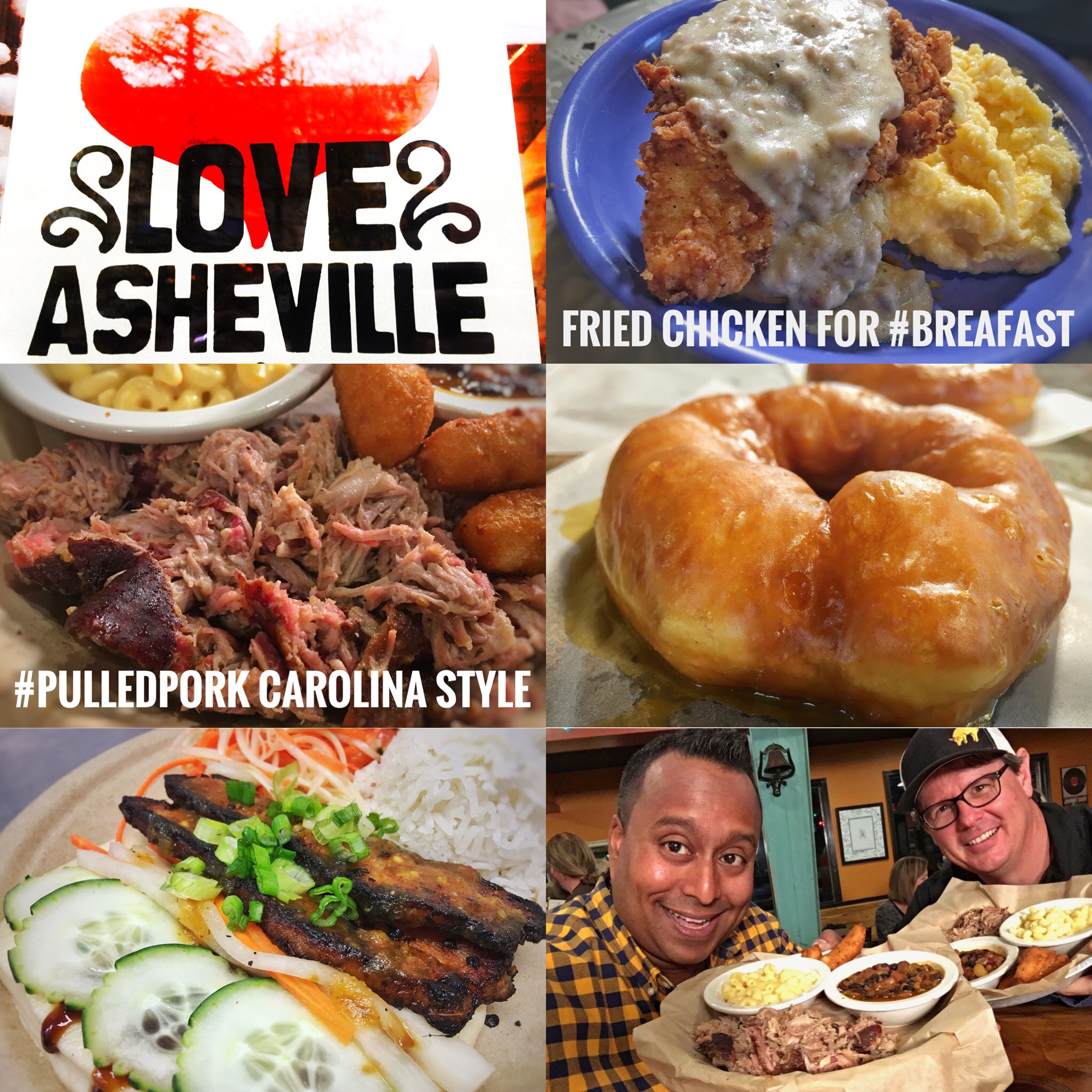 Yeah, I got love for Asheville. I have since the summer of 1998 when I took a road trip there to check the scene out. My most memorable moment was talking to a French Ex-Pat who fled Los Angeles after 10 years and extolled the virtues of the mountain serenity with a 4 year old in tow. Beyond the slower pace of life one would expect, you also have to recognize the draw Asheville has for people from all over the country and beyond. For whatever reasons, the AVL has been designated a cool town and a standout in North Carolina along the lines of the hippie/hipster angle. Charlotte might boast more growth but Asheville has is its own brand of chill. As far as the food goes, this town is a trend setter in the South. As far as the Cheap Eats goes? Well let’s just take a gander! 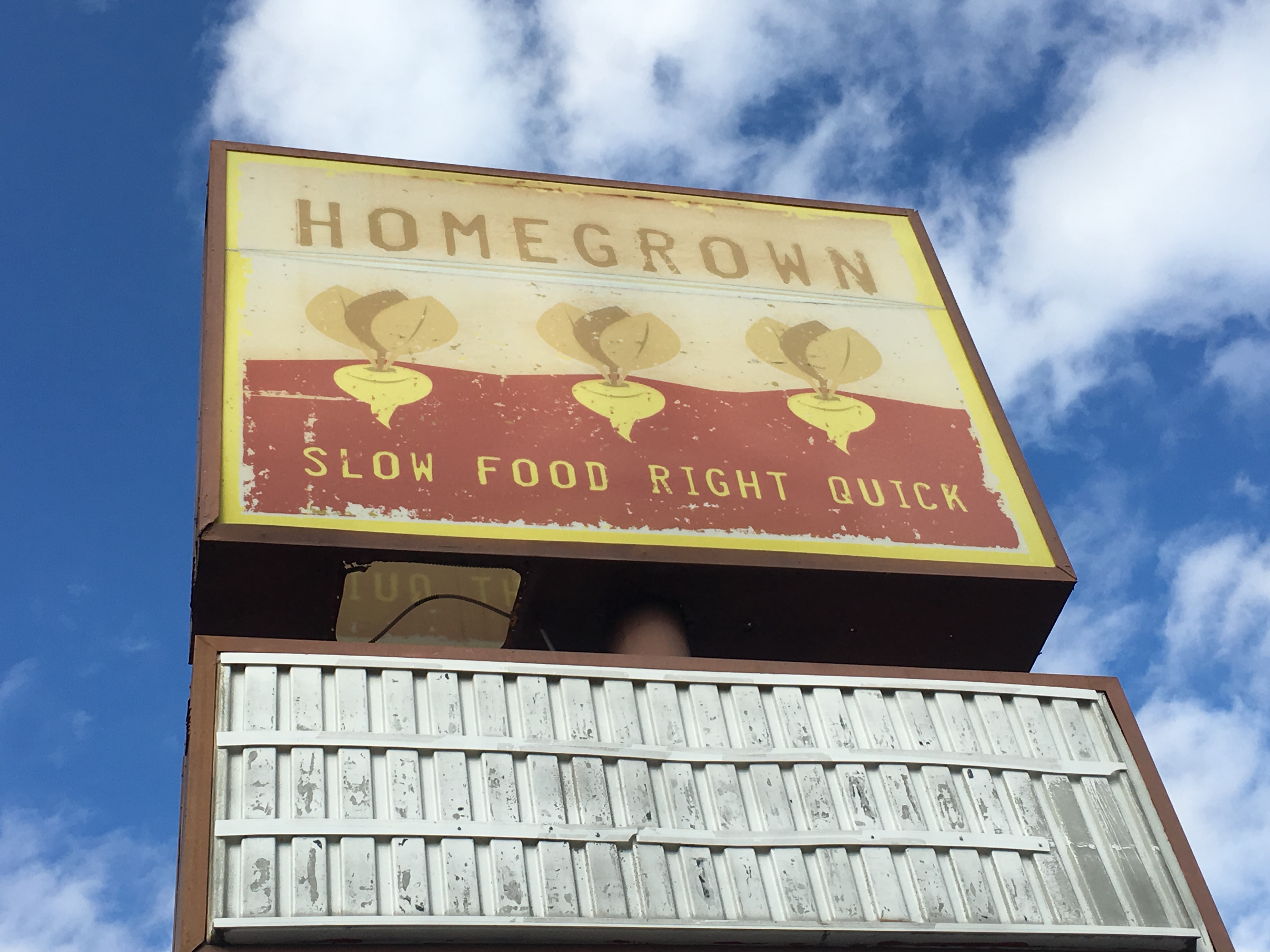 The Vitals:
the spot: Homegrown 371 Merrimon ave Asheville NC 28801
the eats: Fried Chicken Biscuit with gravy
the bucks: $8.50
the full nelson: this is what you dream about when you come to the South

“Fried chicken for breakfast” is a bold statement. And so is real deal classic Southern eats. Fried chicken and biscuit is certainly that. Without doubt Homegrown in Asheville NC is exactly the type of food I dream about eating when I step off the plane and set both feet onto Southern soil. The biscuit is dreamy, the grits are the best I have had and the fried chicken was just money. This dish is so perfectly rich one would assume that gravy would be excessive but it somehow worked. Often times I have found the piling of heavy flavors to be overwhelming on the palate; though in concept makes your brain drool.  Not the case at Homegrown. I could attribute it to Homegrown’s philosophy of locally sourced food, but what blew me away here wasn’t ingredient as much as technique and execution. Their motto is “slow food right quick” but for me it translates to “Southern cooking, real legit”. I spent a bunch of time down South over the last six months and Homegrown was damn near my favorite in the “classic Southern food” category. So, I guess I’ll see you at Homegrown. 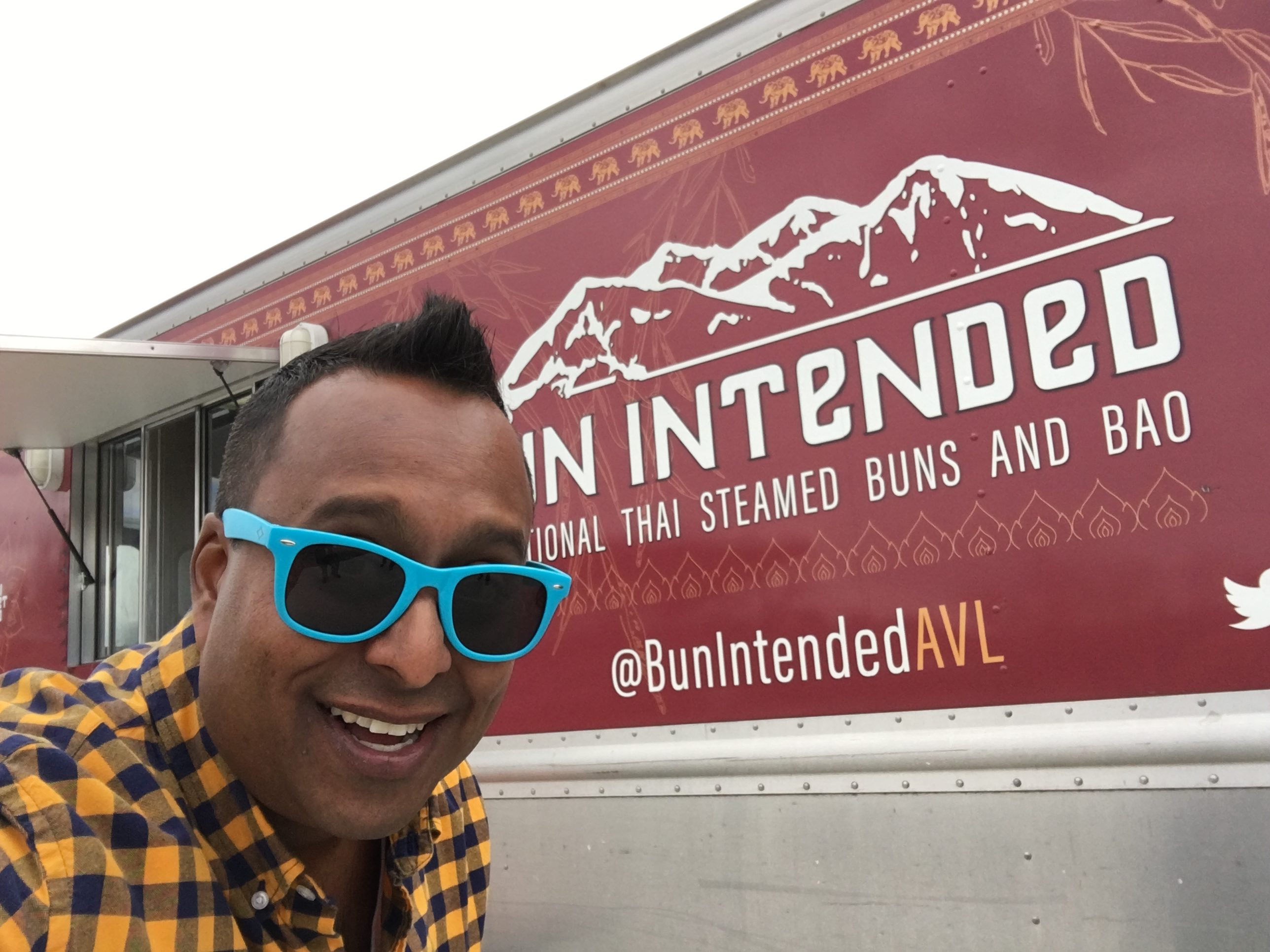 The Vitals:
the spot: Bun Intended Roaming Food Truck so check their schedule on their site
the eats: Pork Belly Bao with Papaya Salad and Rice
the bucks: $8
the full nelson: why Thai food from a food truck is trumping traditional Thai restaurants

For more than a minute, chef’s have been having some fun with pork belly and we, the dining public, have found ourselves eating bacon way past breakfast time. That has been a food trend that has been rolling on for more than a decade. Another trend has been food trucks that are breaking the shackles of traditional Asian restaurants in America. And one cuisine that could become a true breakout is Thai food. While Thai food might not seem as poised as Filipino food to make shock waves in the US, take in the fact that we are inundated with homogenous Thai restaurants, working the takeout and delivery angle, offering cookie cutter menus of Coconut soup with chicken, Panang and Pad Thai. Look, I love all that stuff but there is so much more to lemongrass than a bowl of Tom Kha Gai. Enter the well intentioned AVL food truck Bun Intended, who offers Bao stuffed with Thai inspired fillings such as Thai Basil Chicken or Pork Belly that is cured and braised with Thai flavors. Though the Bao is Chinese in origin, Chef Erica Glaubitz aka “Shorty” informed me that Bao made it’s way  south to Southeast Asia like tacos have made their way north from Mexico to the US. Beyond the sheer deliciousness of Pork Belly cured in lemongrass, kaffir limes, Szechuan peppercorns and thai chiles then braised in more lemongrass and kaffir limes plus Thai Basil, mint, cilantro, ginger and Sambal sauce is the fact that this ain’t the same old take out Thai that has become what one expects when the phrase “How about Thai” is brought up. Yeah, nothing wrong with little genre changing Cheap Eats lunch, nothing at all. 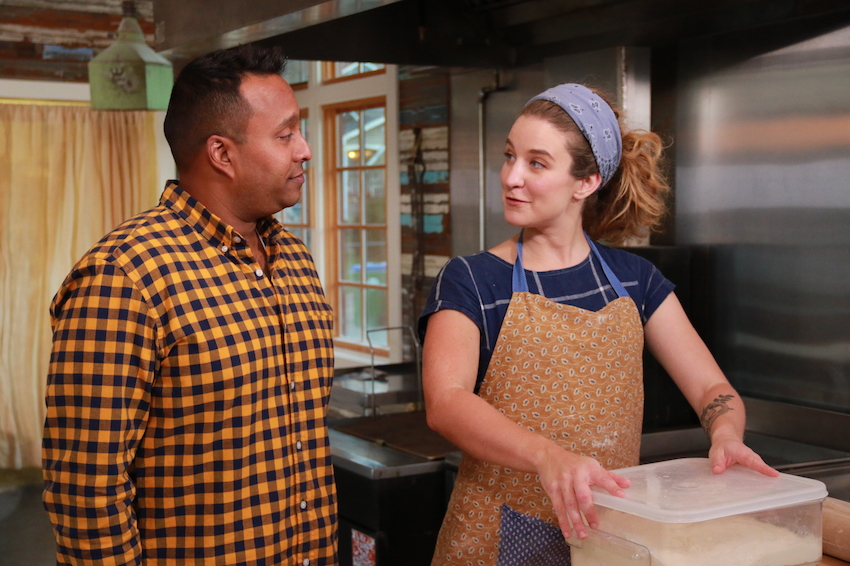 The Vitals:
the spot: Hole Doughnuts 168 Haywood road Asheville NC 28806
the eats: Molasses Bourbon Doughnut
the bucks: $2.75
the full nelson: if only shots of Bourbon were this cheap . . .

I will say this, a donut worth blogging about is a donut that is fried and glazed to order, which is exactly what you get at Hole Doughnuts in the AVL. Hole has gotten the hype for sure, in 2016 a little publication called Bon Appétit named the Bourbon Glazed Doughnut the best dessert of the year. What drew me in was that bourbon – my drink of choice that goes into the molasses glaze. Equally compelling is just how crispy the exterior of the donut is because it is fried to order and has no time to sit and get stale. Like pizza, even a bad donut is still a treat but for this food obsessed explorer, I’ll take my donut fried to order and soaked in some bourbon to boot. 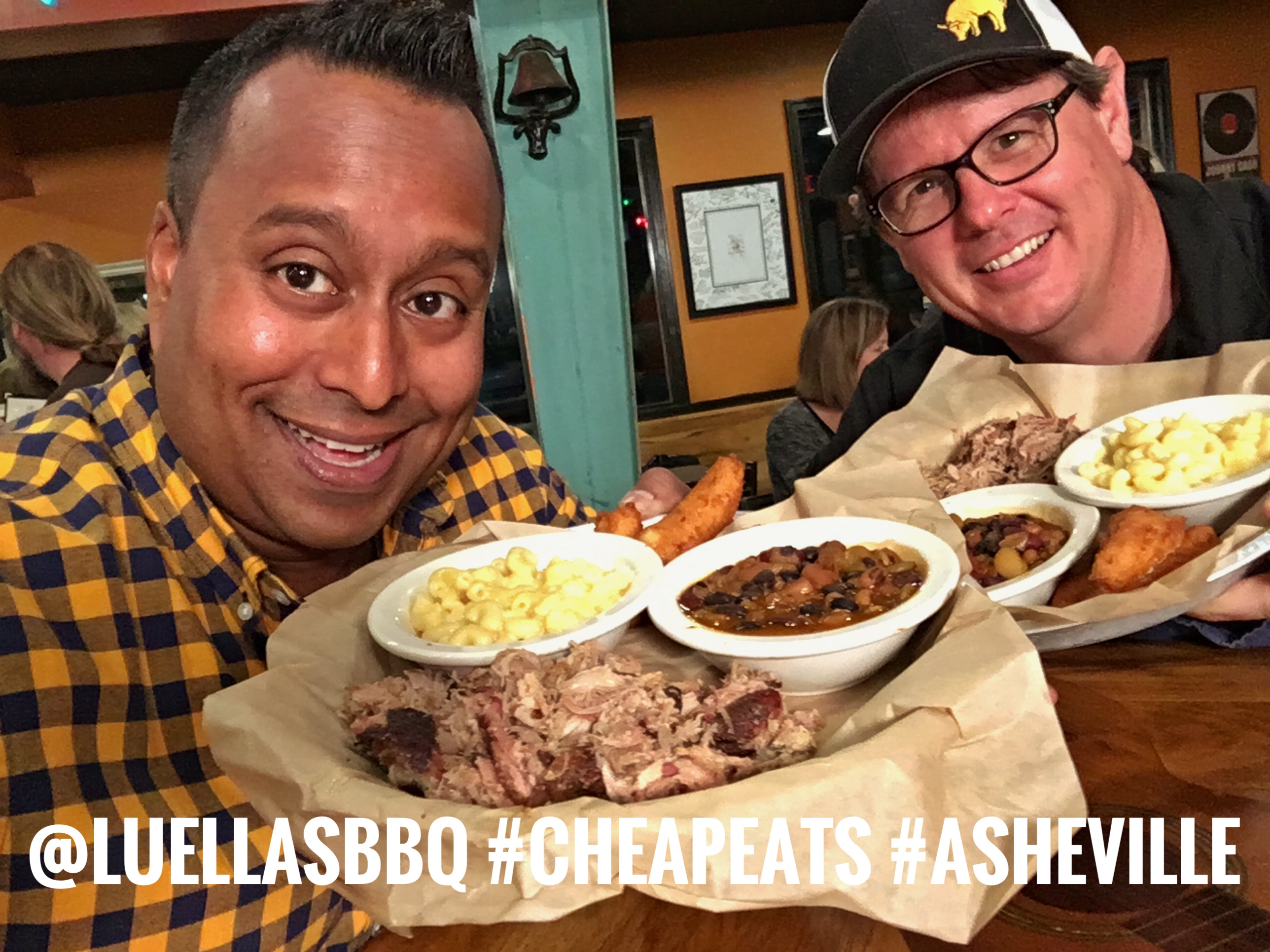 You already might know that North Carolina is known for barbecue. What you might not know is that many of the coveted institutions of pulled and chopped pork(you will taste the difference) are strewn across the state in small towns like Lexington and Ayden. When it comes to Asheville, serious BBQ contenders are relatively more recent arrivals as far as the statewide BBQ scene goes. Back in 2016 Buxton Hall got a lot of hype thanks to Bon Appetit but for 10 years, fine dining chef turned pit master Jeff Miller has been serving up Chopped Pork in the East Carolina tradition that yours truly scored for a killer Cheap Eats dinner. $11.95 gets you a plate of BBQ with two sides, and when the BBQ is legit along the lines of an all hickory 12 hour smoke set to a cool 220 degrees, well its pretty legit. Great bbq will set you back and great bbq is worth the money. When you can get yourself a meal of BBQ for under $15 that hits you with smoke but is far from dry? Reach for a wallet and know you found yourself a gem. One note on the pulled pork vs chopped pork debate. I prefer chopped and I will tell you why: tenderness. Not only is the meat softer from the knife work but that heavy vinegar sauce just macerates the pork. This aint a pork chop, its chopped pork and it should melt in your mouth but still carry that tart and savory vinegary kick. I’m a Austin-Central Texas bbq guy but I tip my trucker to Eastern Carolina’s chopped pork any day. 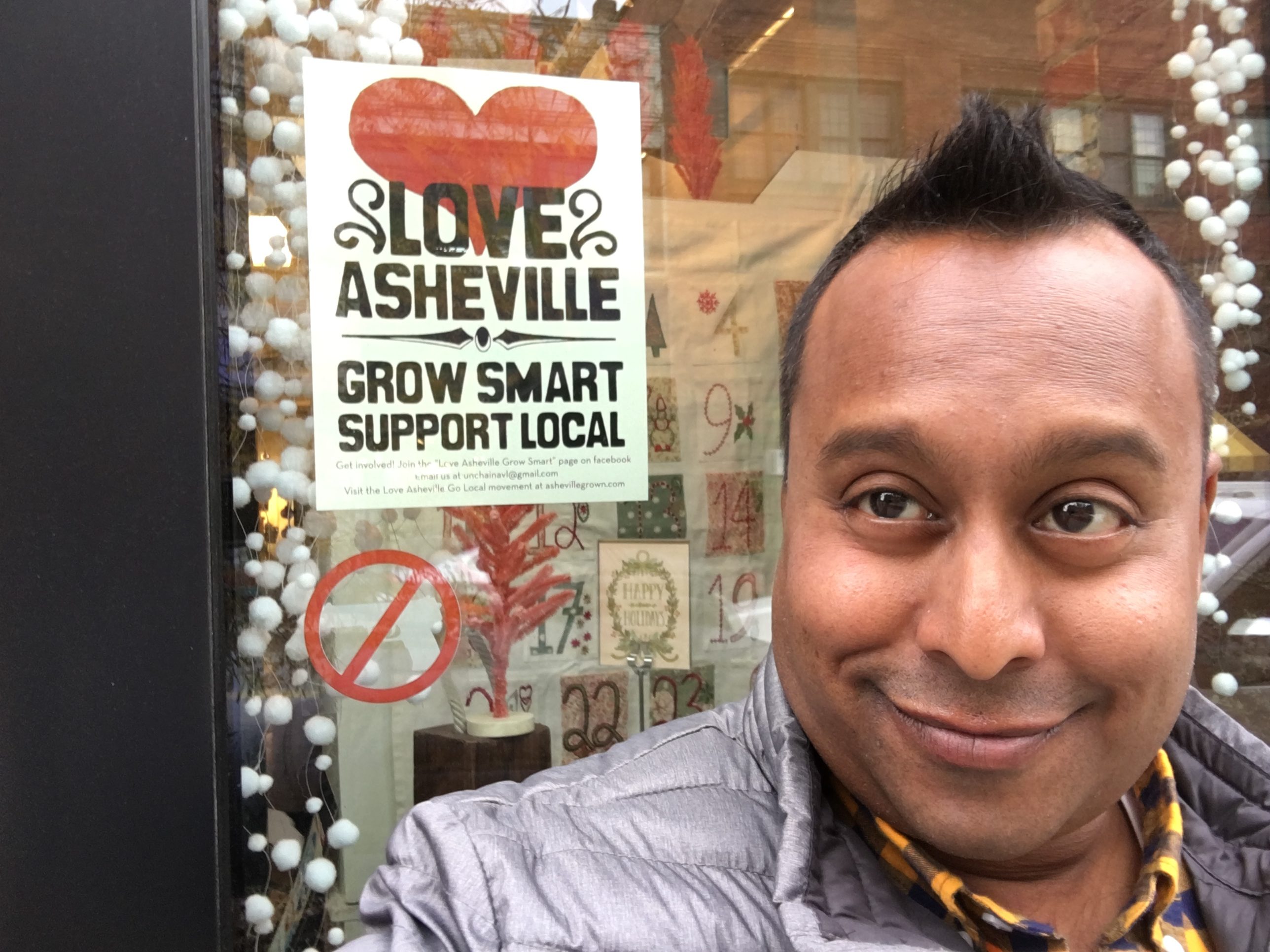 And that is how Cheap Eats is done in Asheville. This town already is drawing visitors in for the mountains, the beer scene and plenty of food options but know that if you are looking to score a 4th meal without breaking the bank . . . well, it Khan be done!

One response to “Cheap Eats ~ Asheville”