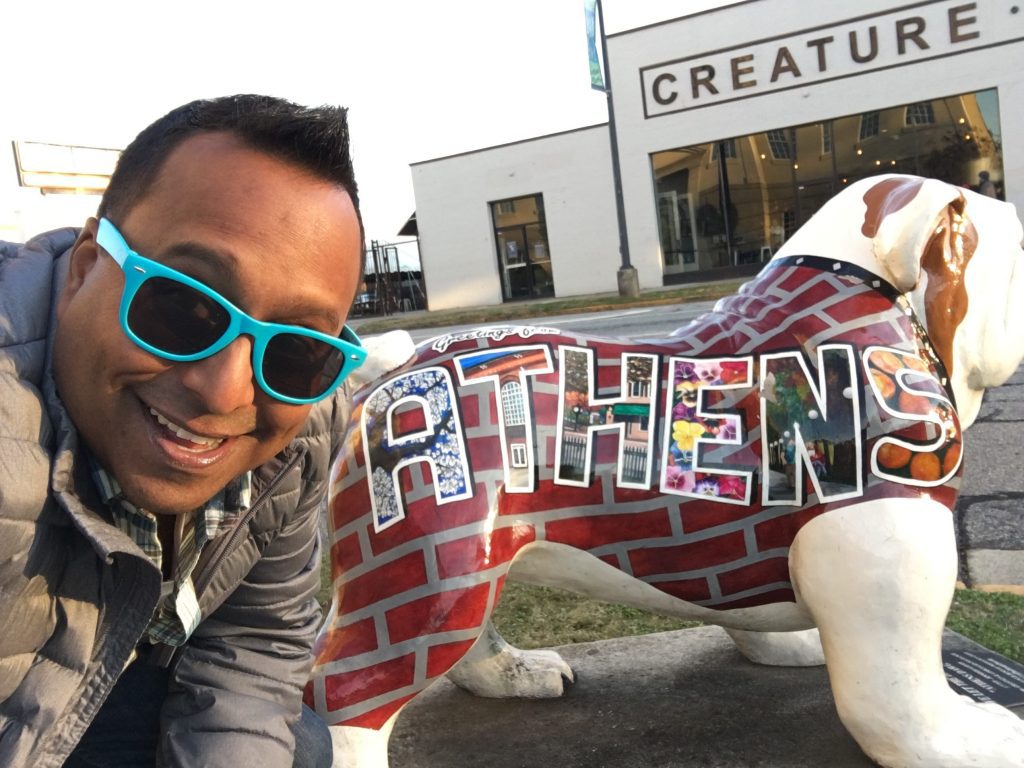 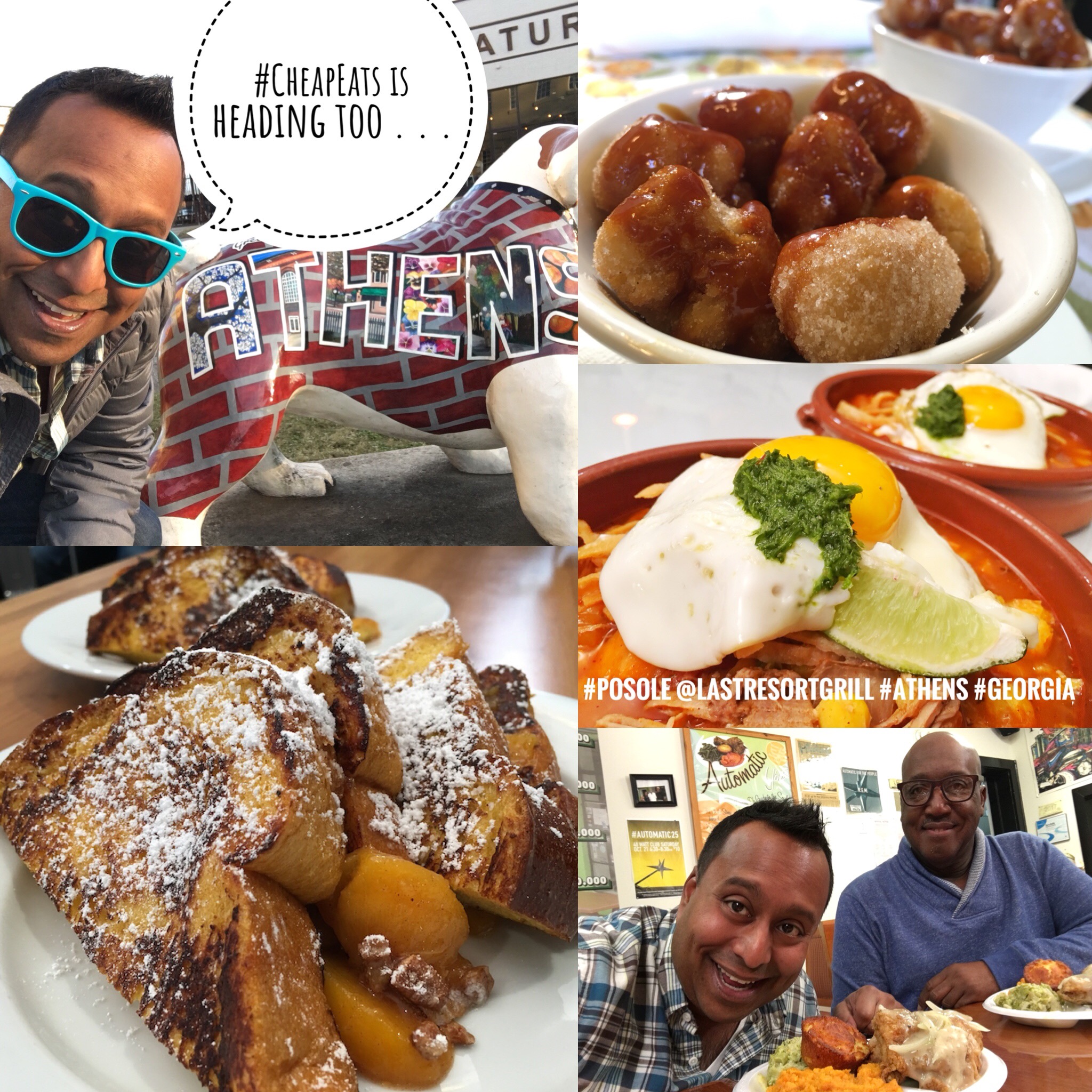 Even though my allegiance to college football is out west with my alma mater, The University of Southern California, I caught a little of the “Go Dawgs spirit” when Cheap Eats went to Athens Georgia last December. And though they may have come up short in a double OT game against the Alabama Crimson Tide, they did not come up short on Cheap Eats. And I ain’t talking just budget either . . . because if there is ONE THING I look for when I’m down south, is a go to soul food joint and let’s just say I got that playing on “Automatic”. And as far as the rest of my Cheap Eats went down in Athens? Well let’s just take a big bite back in time shall we? 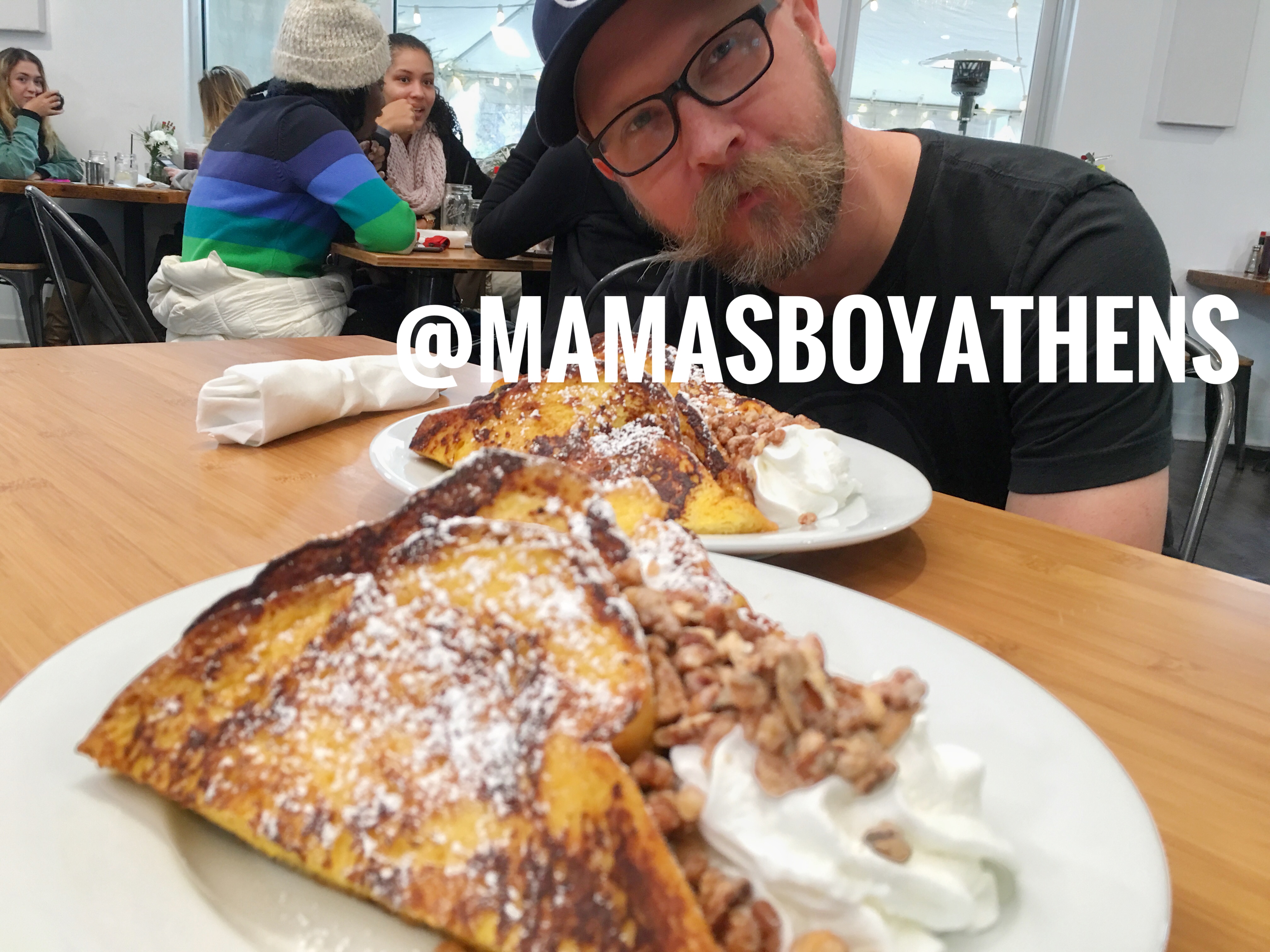 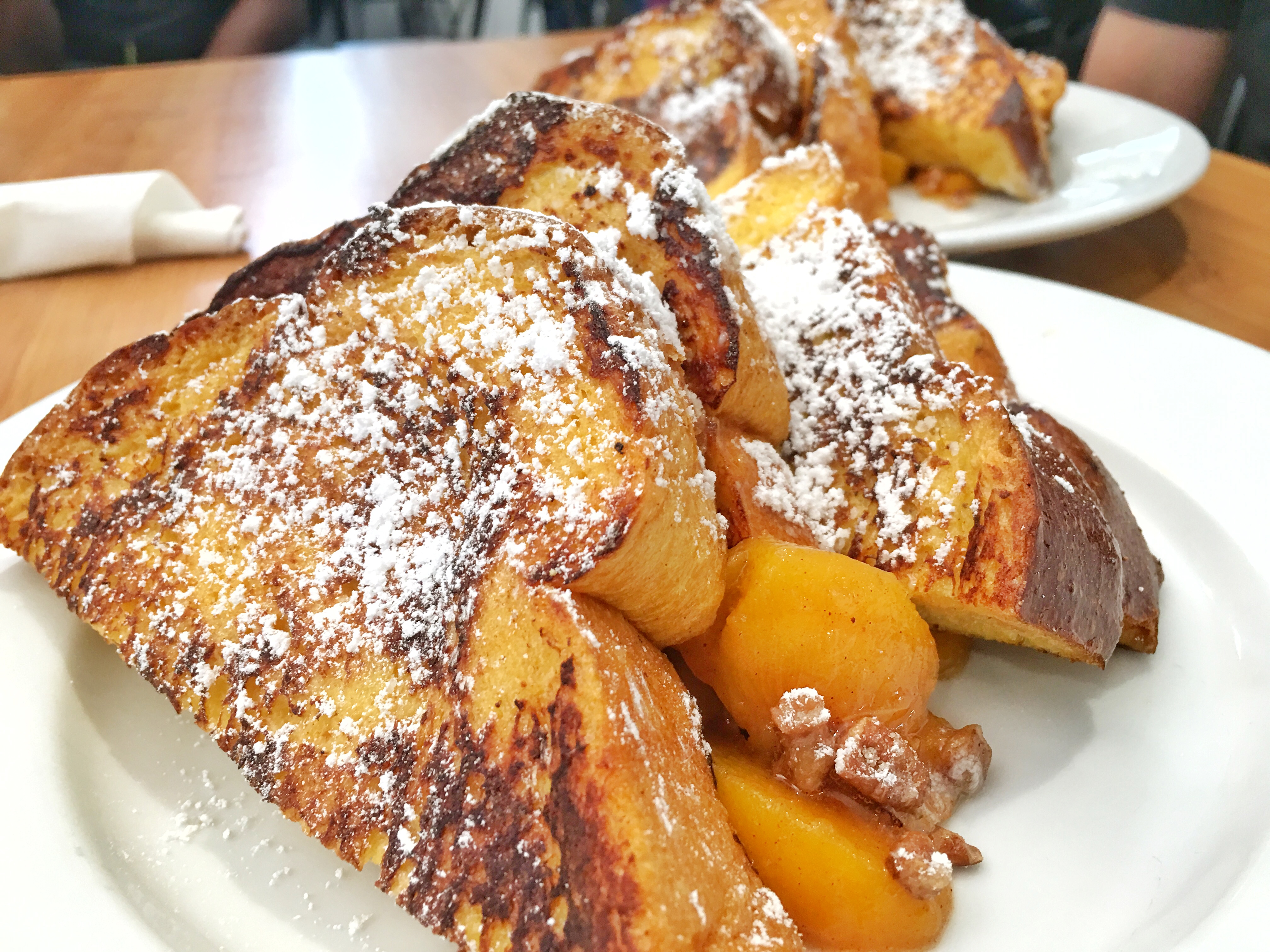 The Vitals:
the spot: Mama’s Boy 8851 Macon Hwy, Suite 403 Athens, GA 30606 plus a location in downtown Athens GA
the eats: Georgia Peach French Toast
the bucks: $8.99
the full nelson: because you have Georgia peaches on your mind

No doubt when you come to Georgia you have peaches on the mind. I mean they are on every damn license plate in the state, well almost. But what of peaches in the colder months? How does one enjoy a soft, ripe juicy peach when the the leaves on the trees are no more? Well, you snag some peaches from last harvest, freeze them and then bake them with brown sugar, cinnamon, ginger, allspice and salt. Peaches will release more liquid than say apples when cooked, making a syrup spiked with all those warming spices. Yeah, you can pretty much skip the Aunt Jemima on this plate of French Toast. Candied nuts add a nice heartiness and the challah bread used for the French Toast comes from a local baker is always a good thing. But you are here for that just peachy experience. Chef Colin Mays grew up in Georgia with fond memories of biting into those oh so juicy ripe peaches in those hot and humid Southern summers. He knew he had to do something with a peach and so this delish French Toast came to be. But there is something more than a local fruit being paired with a breakfast staple happening here. They say calling someone a Georgia Peach means they are from around here, a Southerner, a person that is automatically familiar even if you don’t know their name. And that kinda of is the point of ordering a quintessential dish: to taste the feeling of belonging. All in all a peachy way to start my day. 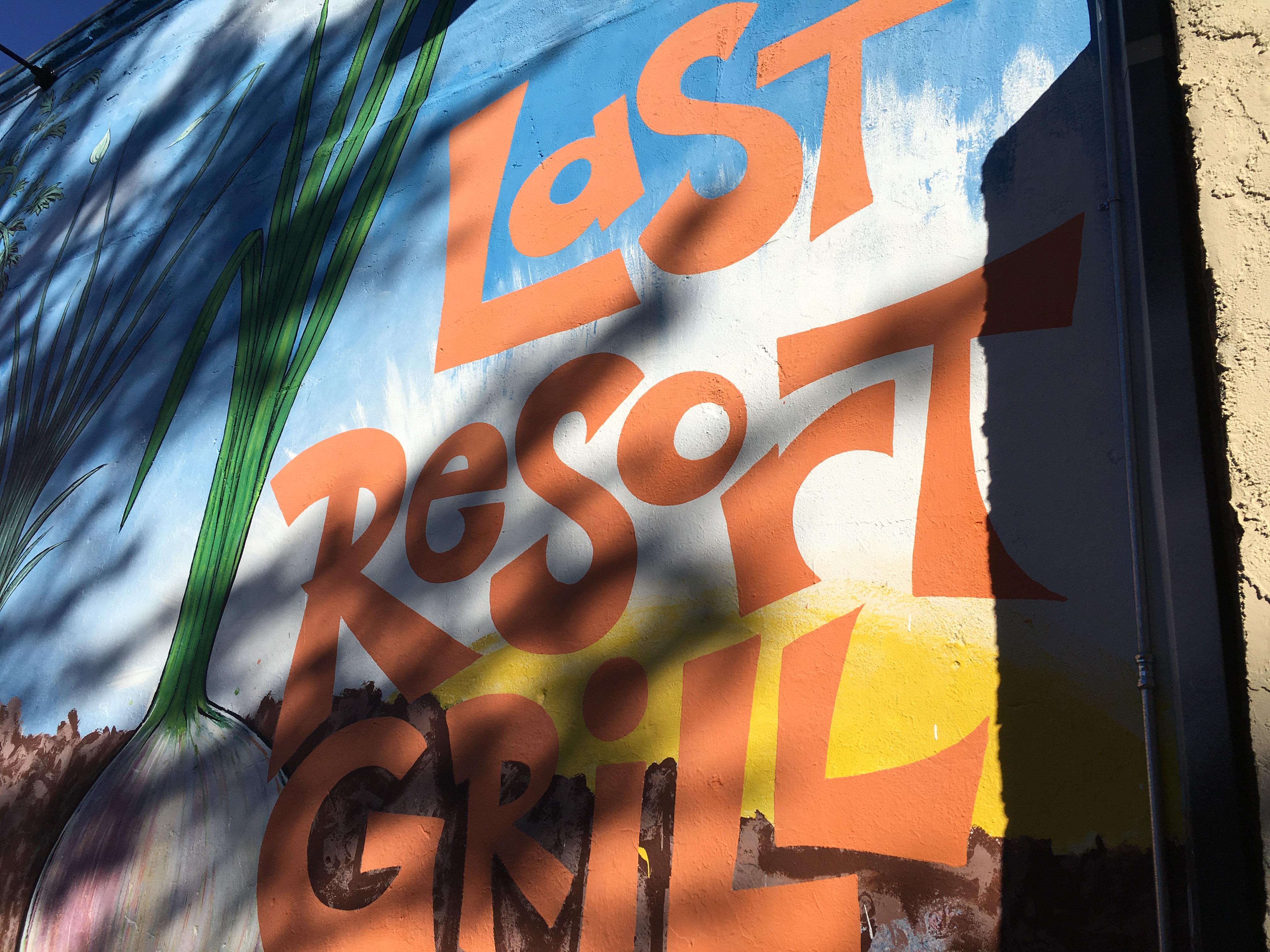 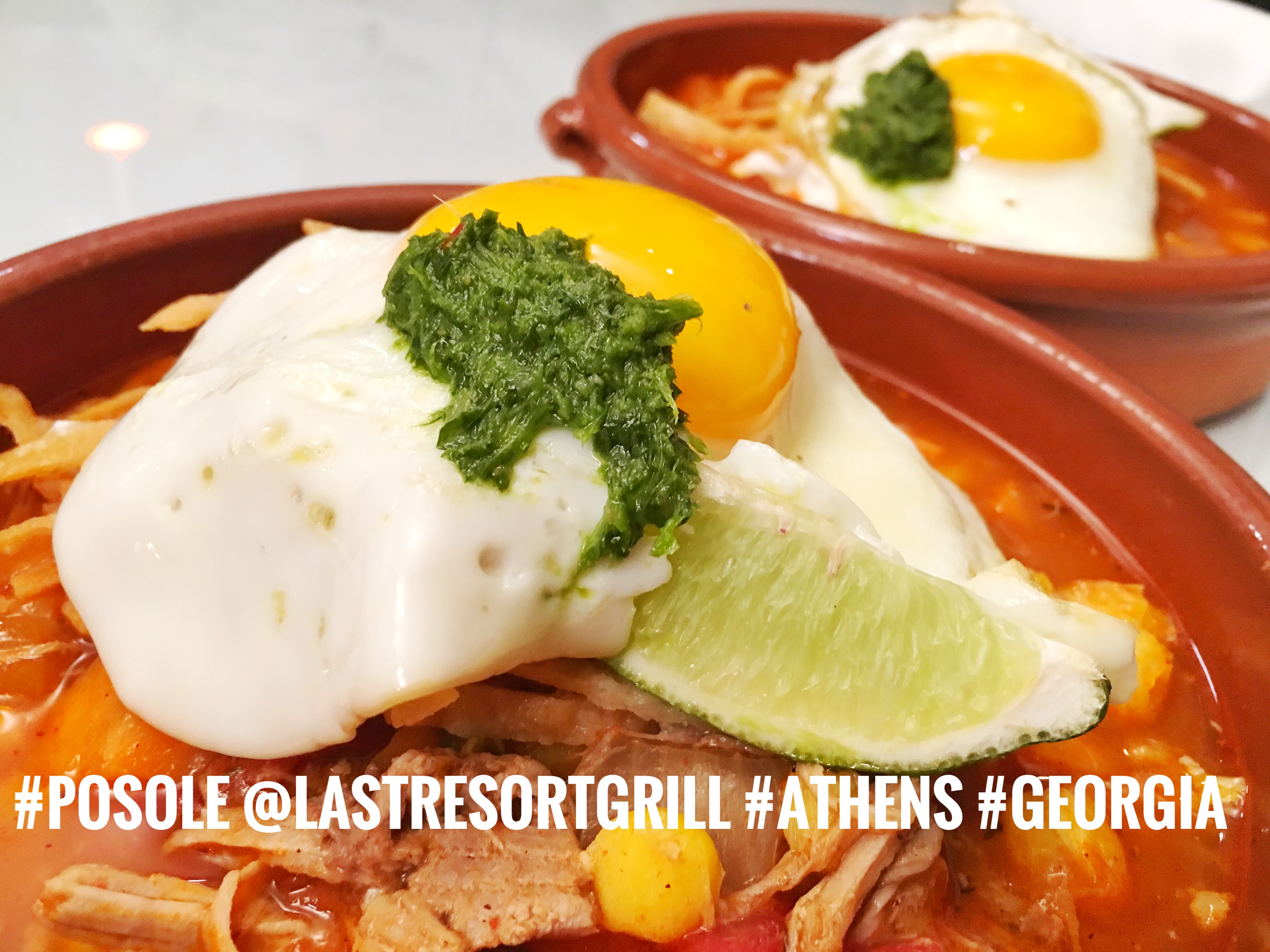 The Vitals:
the spot: Last Resort Grill 174/184 W Clayton St Athens, GA 30601
the eats: Posole
the bucks: $8.50
the full nelson: A classic Mexican stew with a Southern BBQ kick and a fried egg because why not?

I was approached at the airpot a few years back by a Cheap Eats fan who insisted I come to do a show in Athens just to try the Last Resort Grill. Had I known they served Posole and I may have changed my flight on the spot. Posole is a dish you either grew up with, most likely in a Mexican or Mexican American household or you absolutely remember trying for the first time. I fall into the latter category. It was a cold winter’s day in Taos, New Mexico when I had my first bowl of Posole and I instantly became hooked. Sure, who doesn’t love a hot bowl of soup when it’s snowing outside but we are talking a stew with a depth of flavor few cuisines besides Mexican can bring. Classically Posole is a stew or soup with hominy, meat, chiles and various garnishes like onion, cilantro, lime, avocado, and cabbage. My first was a chicken Posole with hatch green chiles; one of the most exciting Mexican/Mexican inspired dishes I had to date. Eventually I would come across the pork variety in a red broth, far richer and very handy when hungover. I even have made Posole with left over Thanksgiving turkey which has become a go to along with turkey club sandwiches. I guess you could say I am Posole obsessed. Which made choosing the Posole at Last Resort Grill a bit of a no brainer. Now while I wouldn’t call this Posole traditional, it would certainly fit the bill as a hangover cure by virtue of the fried egg topping alone. The pork is hit with a BBQ rub, smoked and pulled which doesn’t exactly scream Mexico City but to be honest, a bbq rub is a bunch of spices and so much of Mexican cooking involves spices of all varieties, so it just works. Last Resort Grill is anything but a Last Resort: the place is always packed and certainly is an Athens staple. Beloved enough to even stop someone at the airport and say “you need to go there”. Well, stranger who put Last Resort on my radar, you got your wish and I got a solid Posole lunch for under $9. 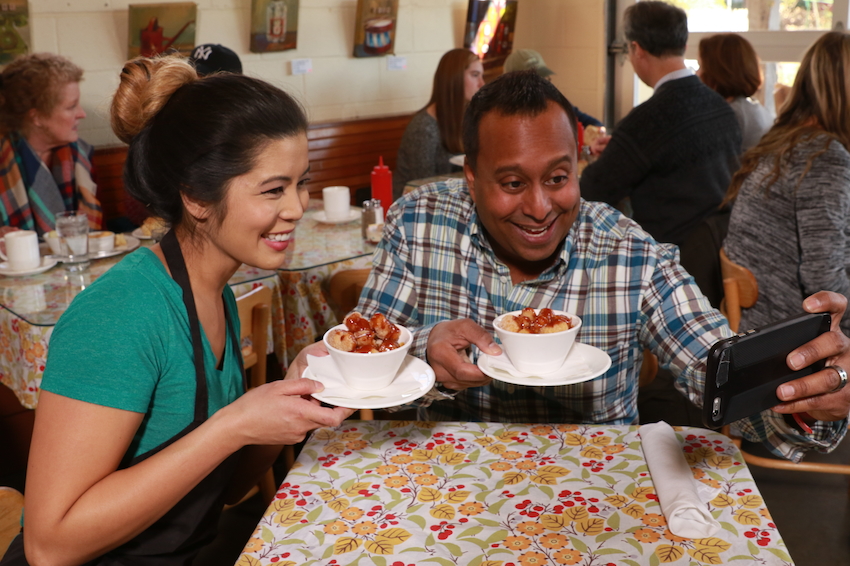 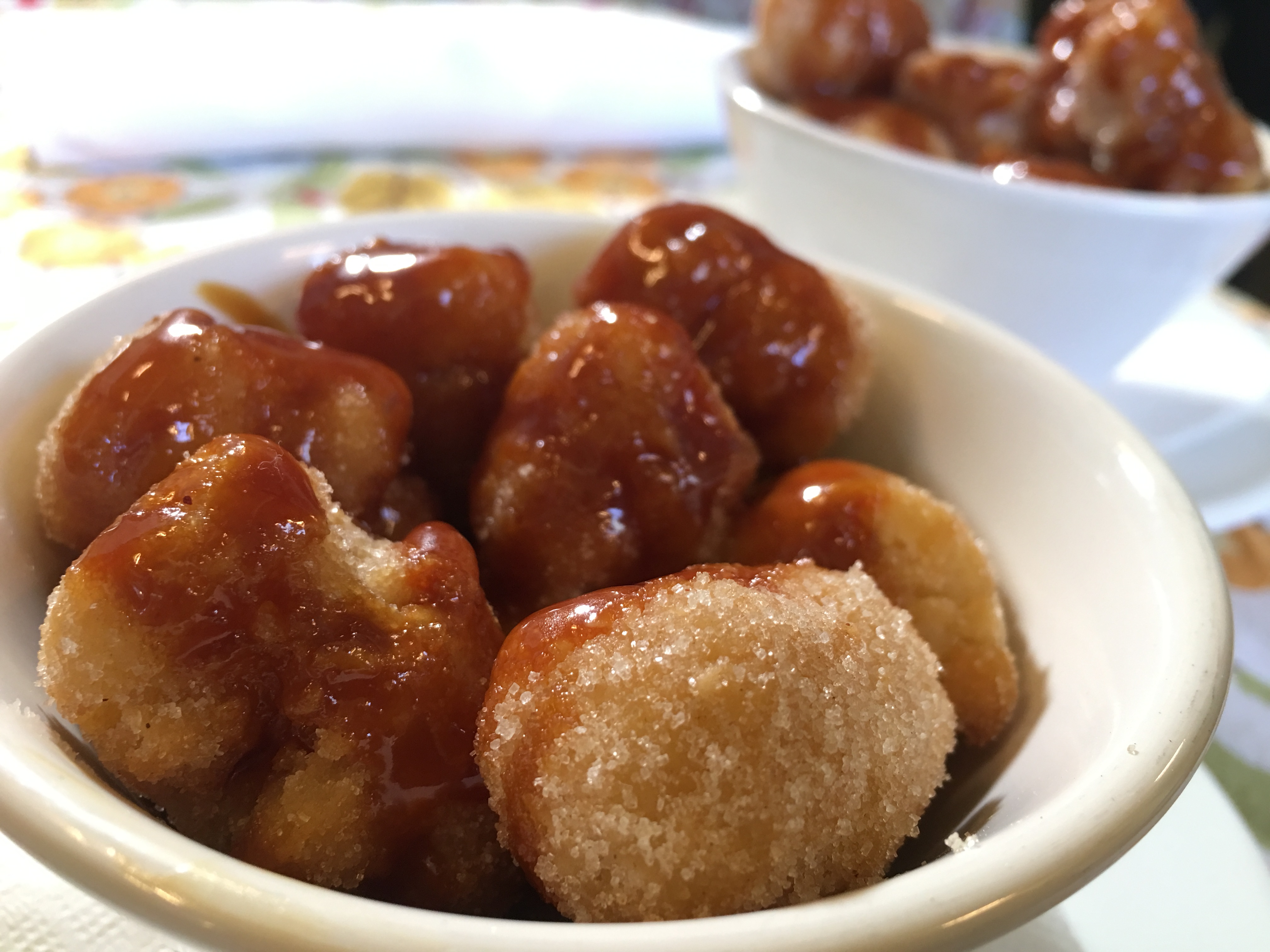 The Vitals:
the spot: Heirloom Cafe and Market  815 N Chase St Athens, GA 30601
the eats: Doscuit Holes
the bucks: $6
the full nelson: Even donuts holes in the South are made with biscuit mix

If you are serious about making biscuits, and we are in Athens Georgia after all, you never want to over work the biscuit dough. So when you have scraps from punching out biscuits from a sheet of dough . . . you toss them. To take the scraps and make biscuits out of them would yield an inferior biscuit from a texture stand point alone. Or, you could be a total genius and fry them like donut holes. I knew there was something about sustainability that I really liked. I also like salted caramel; that fascinating pairing of salt to cooked down sugar that transforms caramel into something more that the chews I nibbled on during Halloween trick or treating. Chef Nicholle Bath steps up salted caramel by swapping out the salt for miso: a paste made from fermented soybeans, salt, rice and barley. Yes, she is adding Umami into biscuits. And that is just really really cool. So is deep fried biscuits apparently and I have to say the doscuit holes were among the most interesting snacks I have ever come across in Cheap Eats. Also getting 10 of these deep fried biscuit bombs in an irresistible caramel sauce for $6 ain’t exactly a raw deal. Me so wish I lived closer to Athens. 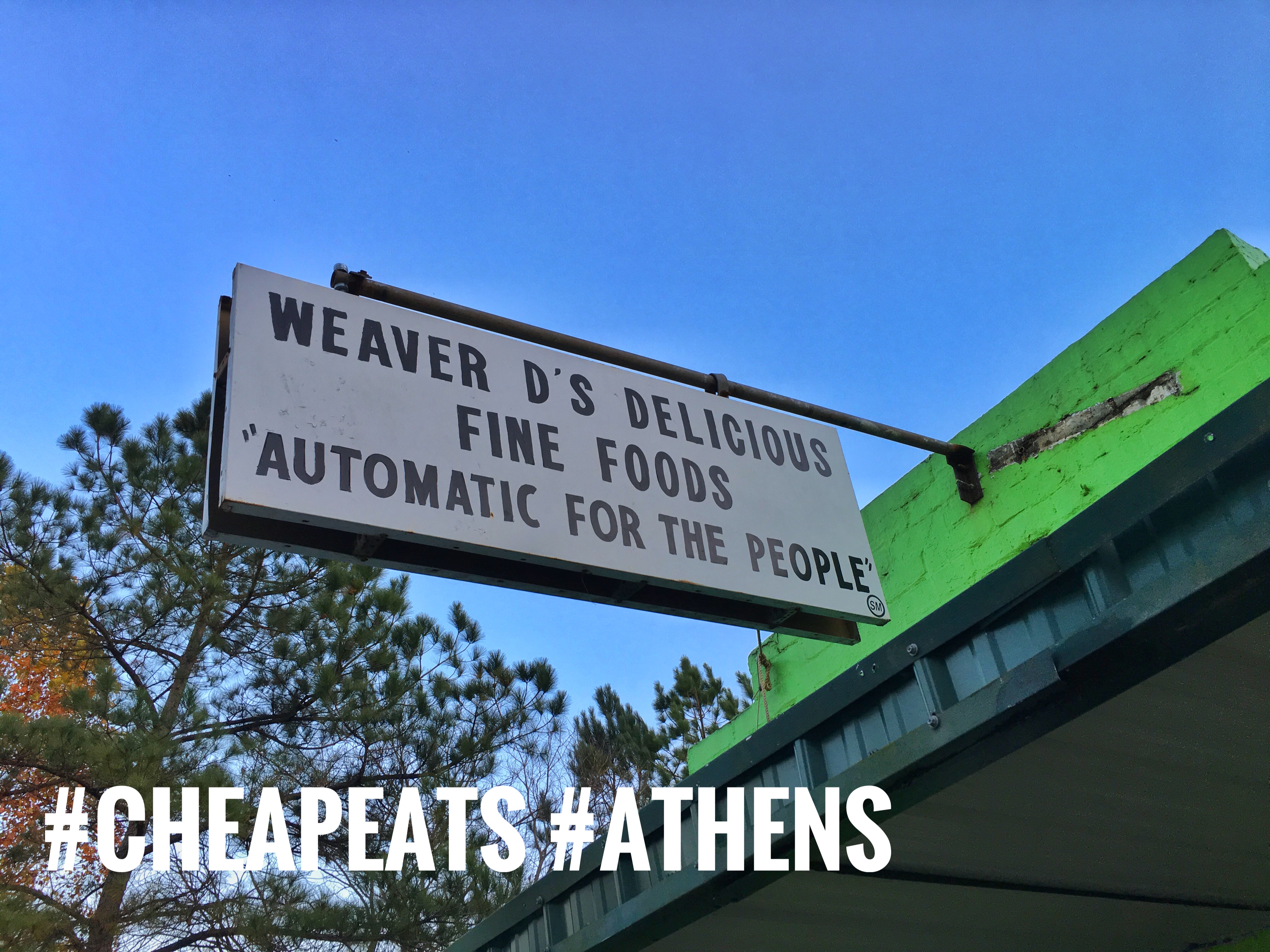 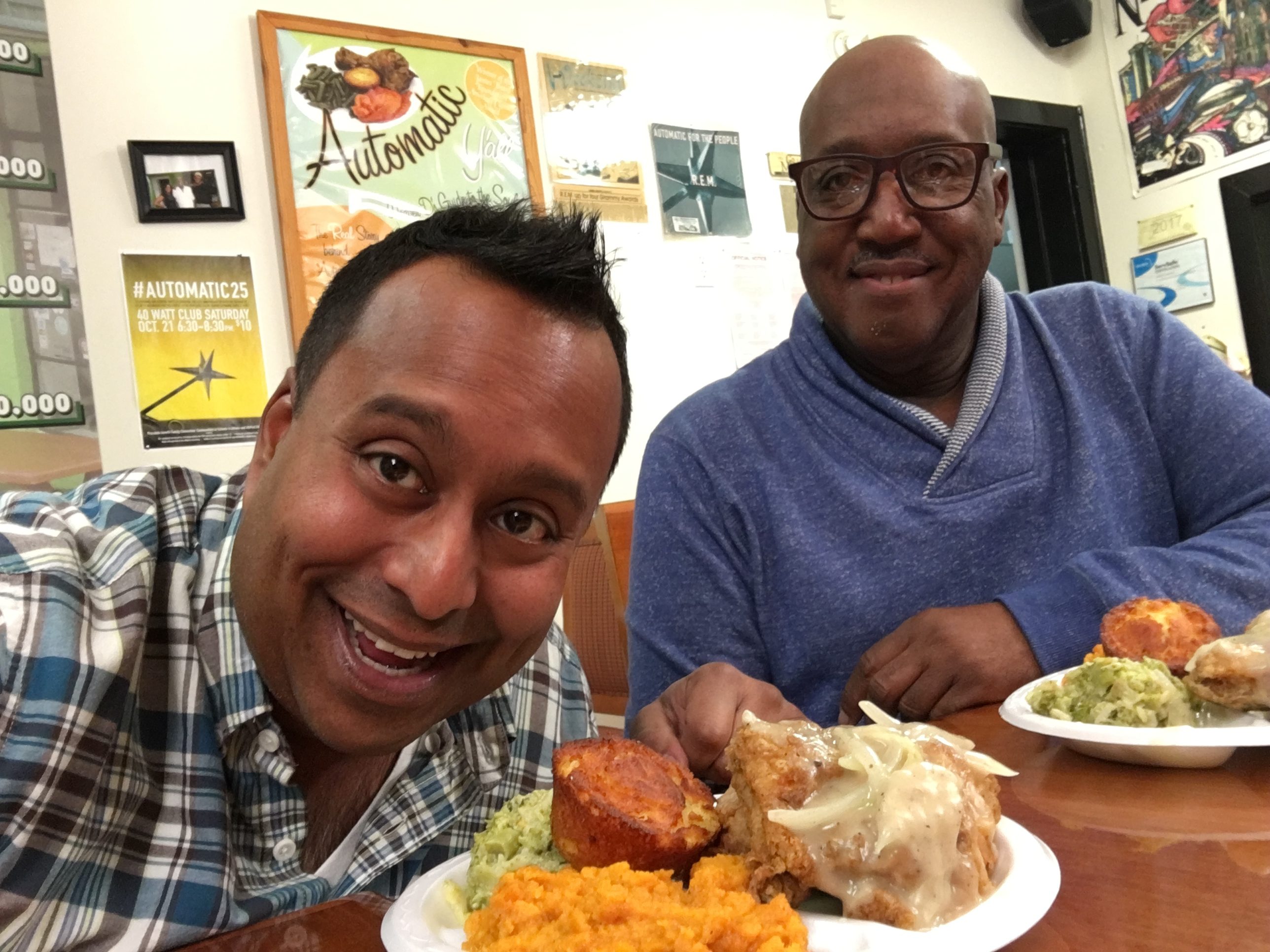 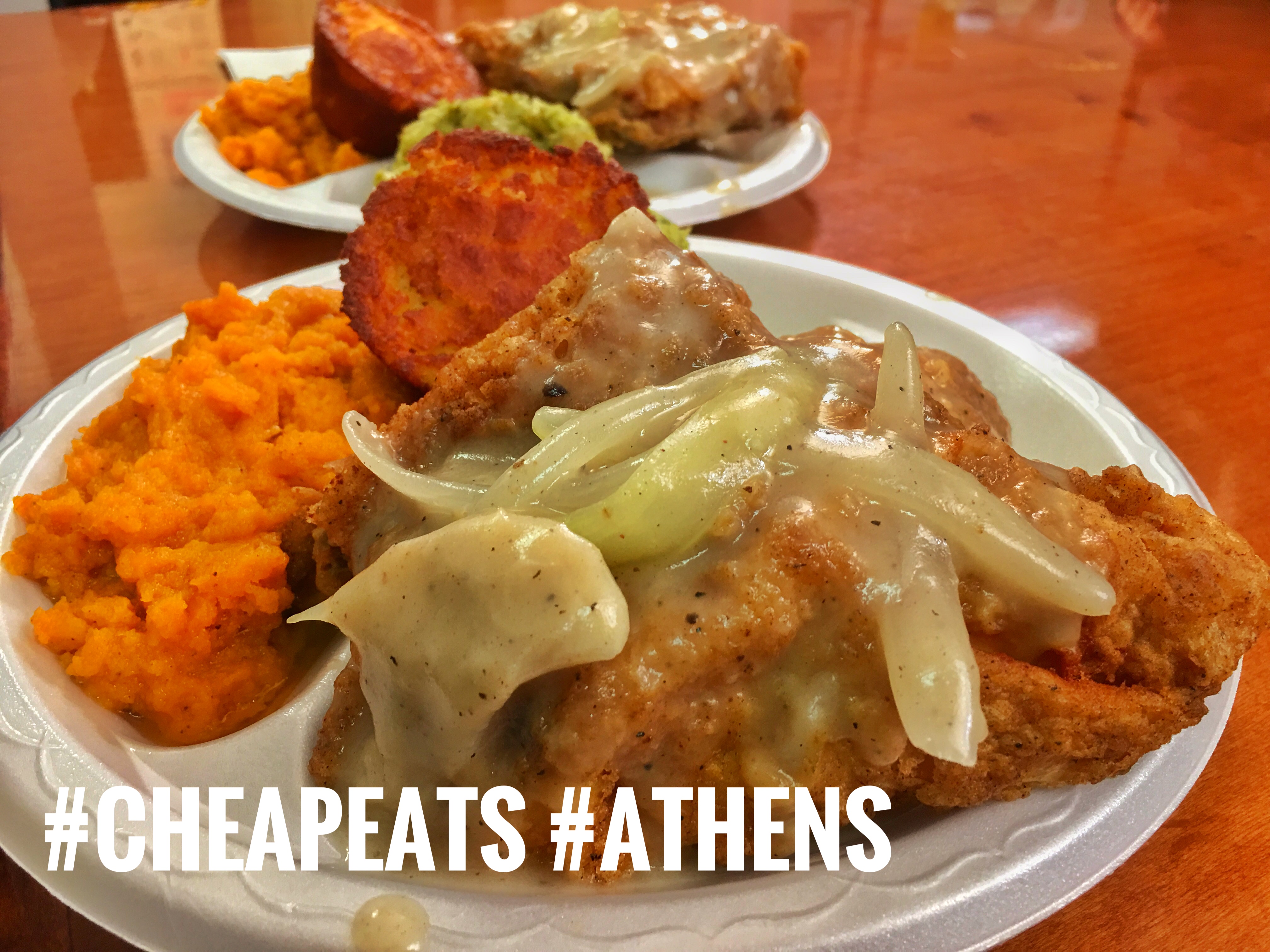 If there is one thing I just expect to find in a Southern town is good fried chicken. Now it doesn’t have to be some buttermilk brined type affair. But I do expect down home, simple, crunchy, juicy fried chicken satisfaction. I ain’t looking for Panko in the breading or even that intoxicating zip of Korean spices found in “KFC”(Korean Fried Chicken) joints up north in NYC. Not that there is anything wrong with that, I’m just looking for some fried chicken to match well with the small town Southern scenery. Well let me tell you about a place called Weaver D’s Delicious Fine Foods; a place that inspired the name of R.E.M.’s seminal album Automatic for the People and the man himself: Dexter Weaver aka Weaver D. First off every other word he says is “Automatic“. I’m not sure why. I also don’t know why it is so catchy, I started saying “Automatic” as often as he did, because . . why not? I also don’t know why Dexter seasons his chicken with iodized salt and garlic salt. But it works. I saw a couple UGA kids just absolutely picking the bones clean off their plates of fried chicken. Weaver doesn’t brine his birds. I would bet the poultry farm that he doesn’t source his birds from any place special. And he just knows when the chicken is done without relying on a thermometer or a timer. Yet it is damn good fried chicken. The fried chicken you expect to find down in a town named Athens, Georgia. One would think his simple soul cooking would be the sum total of his culinary repertoire but when I met him he was putting together an elegant catered event spread with braised short rib this, canapé that. There is no explaining the phenomenon of Weaver D’s just as there is no hint that the almost glowing green shack of fried chicken excellence would become inspiration for one of the greatest rock bands of all time. But I can explain that for just under $10 you’re gonna crave this plate of down home real deal chicken as long as you are within an X mile radius. And it’s a craving that comes on . . . like automatic. 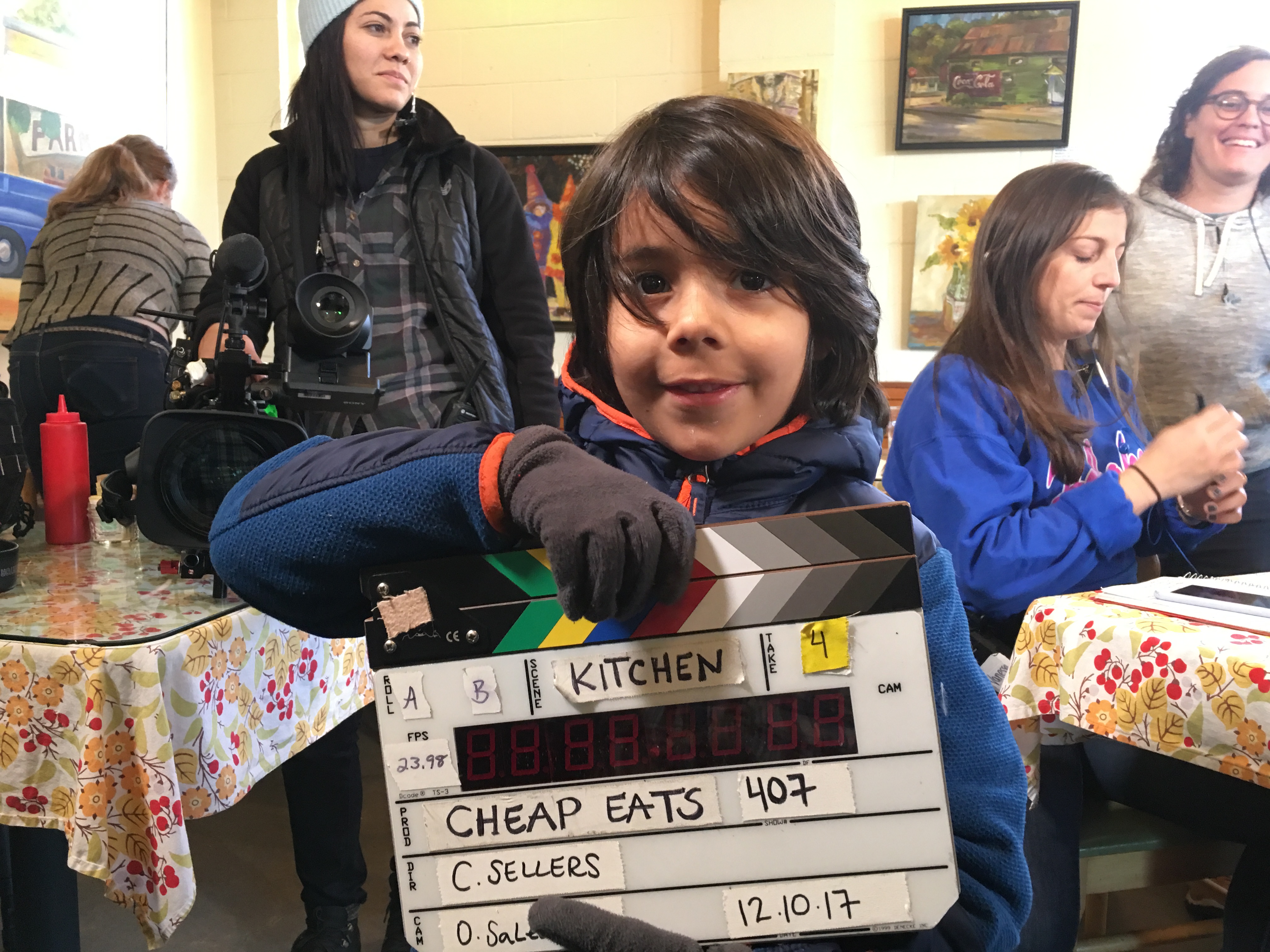 Added bonus: bring your kid to work day! Nothing cooler than putting your kid in the show and if you looked real carefully during the tasting scene at Heirloom Cafe and Market . .  you could see my boy in the background noshing with his Mama(the back of her head but still). And so went Cheap Eats in Athens: a storied college town and home to a rock phenomenon that also can feed you well in all kinds of ways, including on the cheap!

One response to “Cheap Eats ~ Athens”