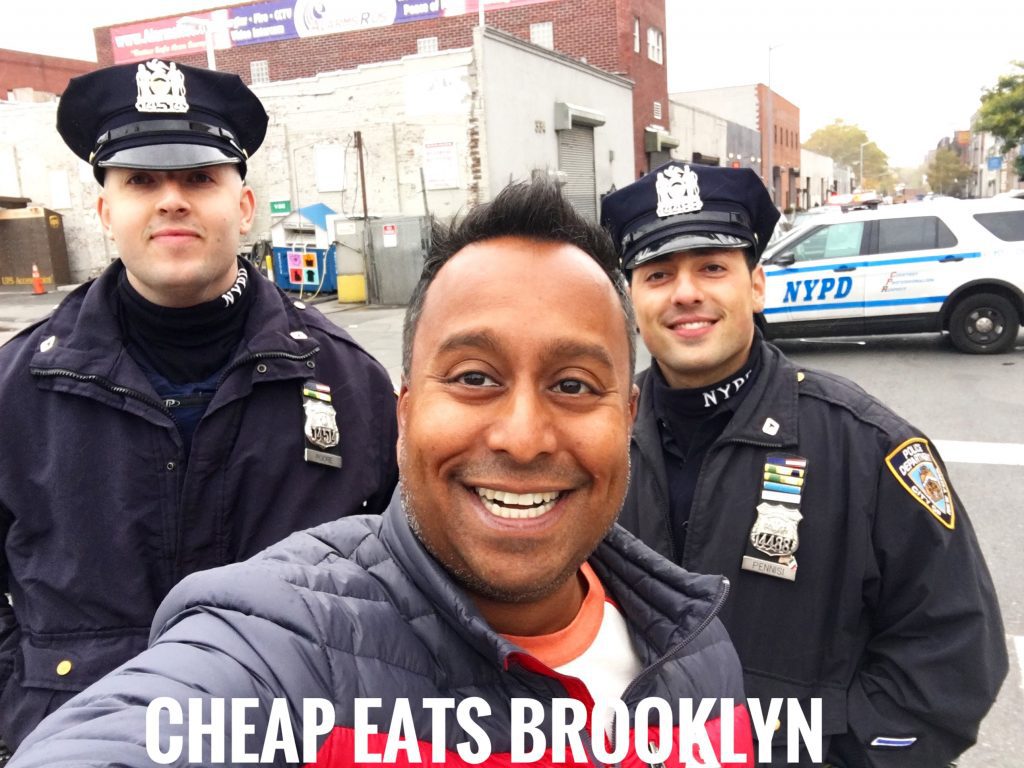 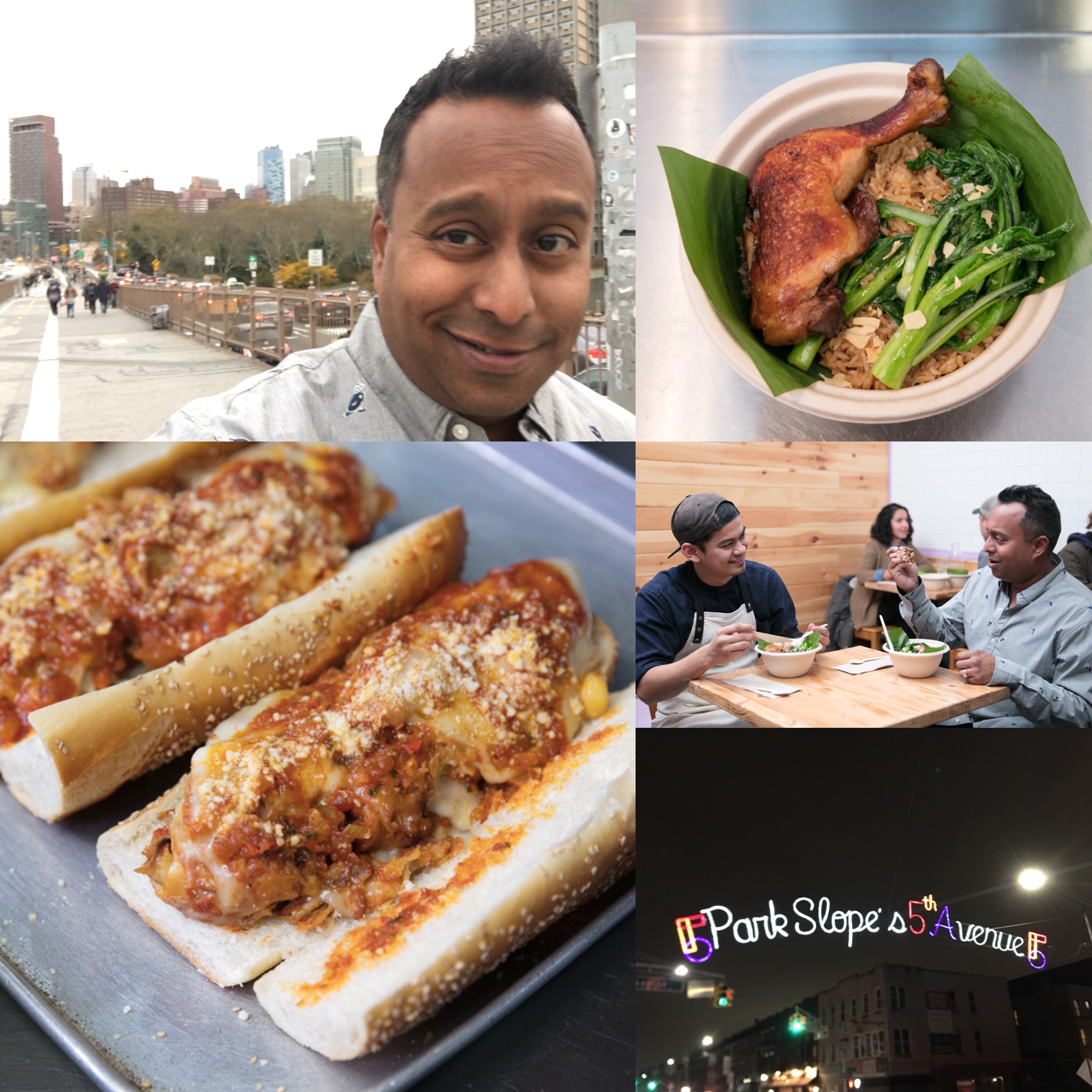 Brooklyn. The largest borough of the NYC. Simply iconic. And for a long while an oasis of Cheap Eats along with cheap rent. But then Brooklyn blew up and decided to take on big brother Manhattan as the “it spot” in NYC. Suddenly the idea of Cheap Eats became a challenge. Well yours truly is always up for a Cheap Eats challenge almost as often as I am up for a trip to the city that never sleeps, so get ready for the lowdown rundown on Cheap Eats Brooklyn!! 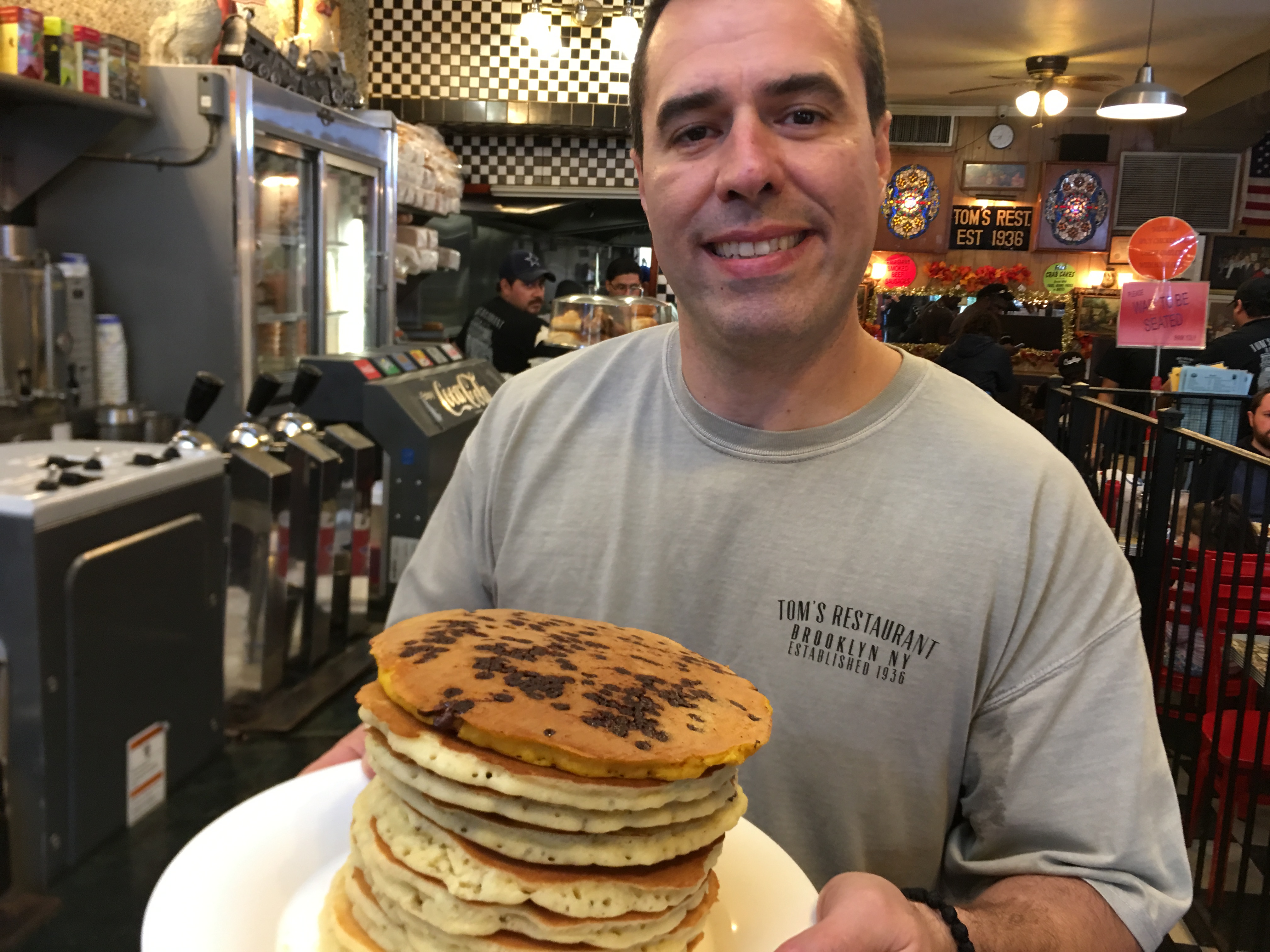 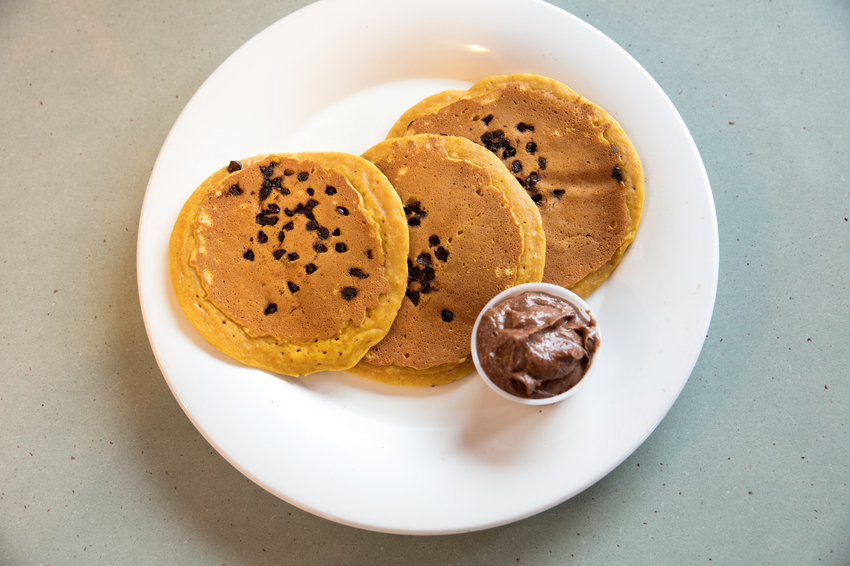 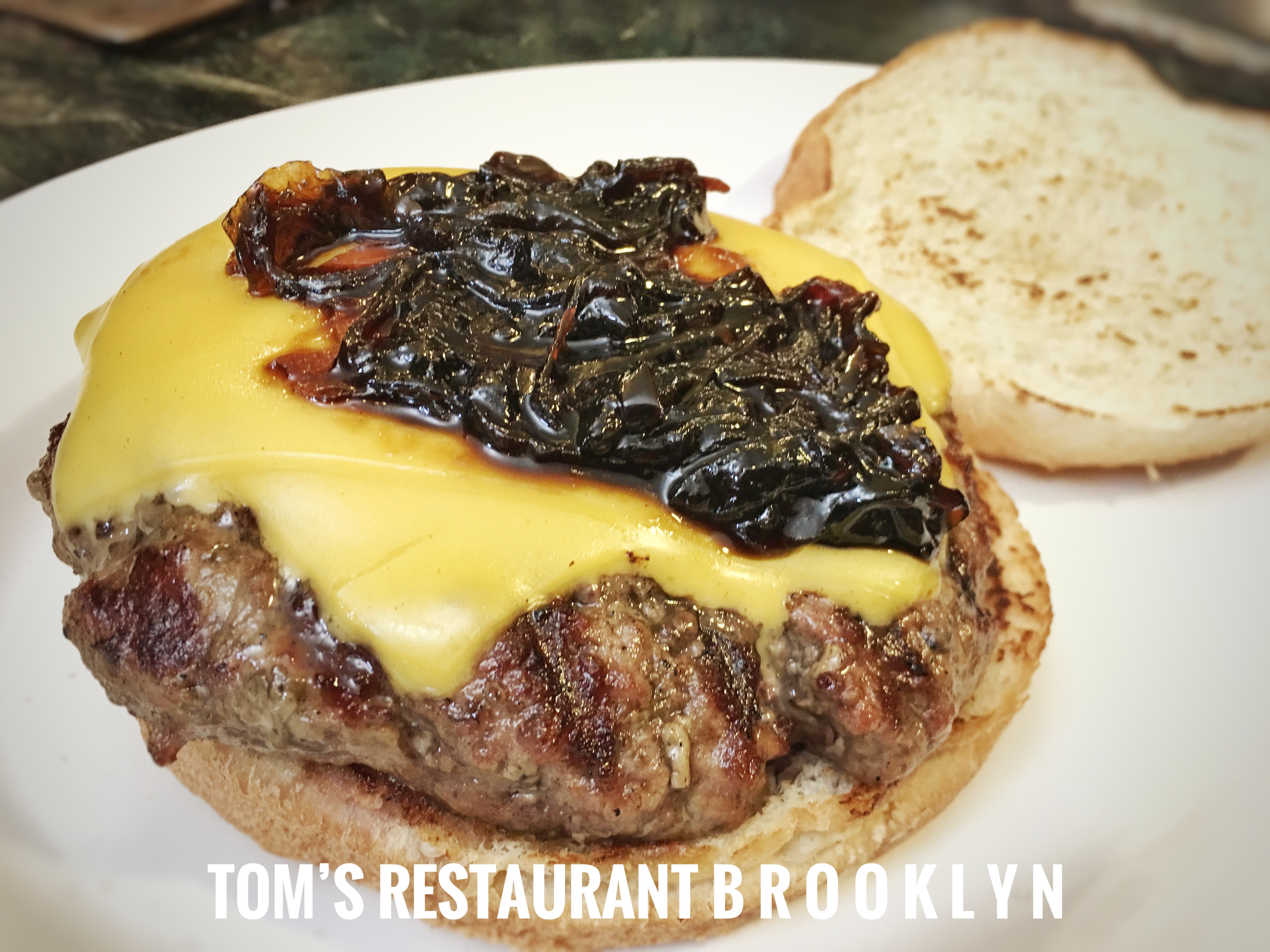 While the idea of eating in New York City might conjure up the vaulted ceilings and chandeliers where Gotham’s elite dine, it is also the land of epic breakfast diners and luncheonettes. Tom’s Restaurant is a legendary example of both. Though technically one would call it a luncheonette, on Cheap Eats Brooklyn, I called it breakfast. And speaking of breakfast, the call here was pumpkin chocolate chip pancakes; the kind of foodie concoction that could have spurred a cupcake empire in the mid 2000s or just some serious cooking creativity one tends to find in the kitchens of New York City. Up and down the menu, the food is legit and supposedly legendary food show host Adam Richman has popped in from time to time. But Tom’s is something more: a historic restaurant in a town full of history and restaurants. With a lineage of Greek immigrants running Tom’s, the founder who gave the gift of his name to this establishment, passed the restaurant on to his son, Gus. And Gus was a legend, a stalwart, an absolute treasure of a guy who was as much part of the draw as the food. Today Tom’s is run by Jimmy Kokotas, Gus’ nephew, and believe me, the apple does not fall far from the tree. He has more than a few jokes and stories to share about the good old days at Tom’s. And when you take a bite of these pancakes, a fascinating flavor pairing of pumpkin and chocolate that oh so works, you will realize that the good old days are still alive and well at Tom’s, thanks to great food, and memorable characters like Jimmy Kokotas, his Uncle Gus and Great Uncle Tom. 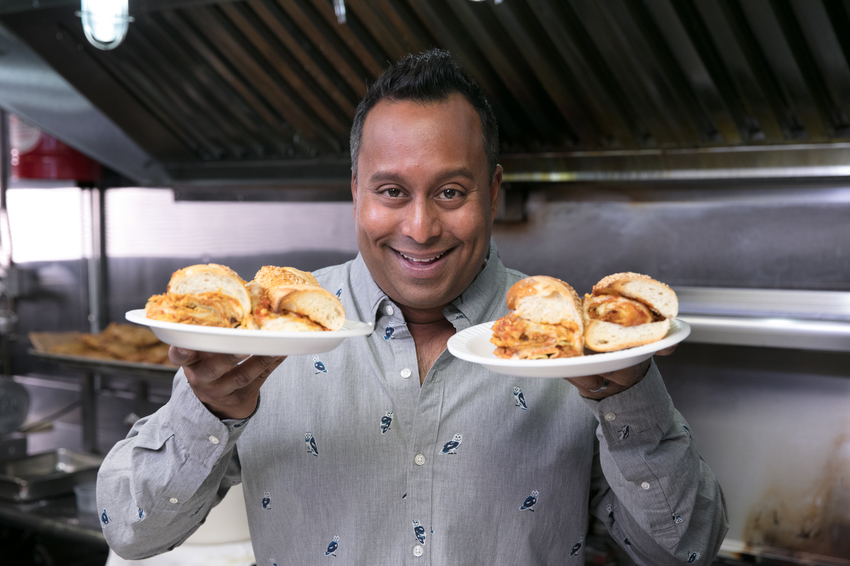 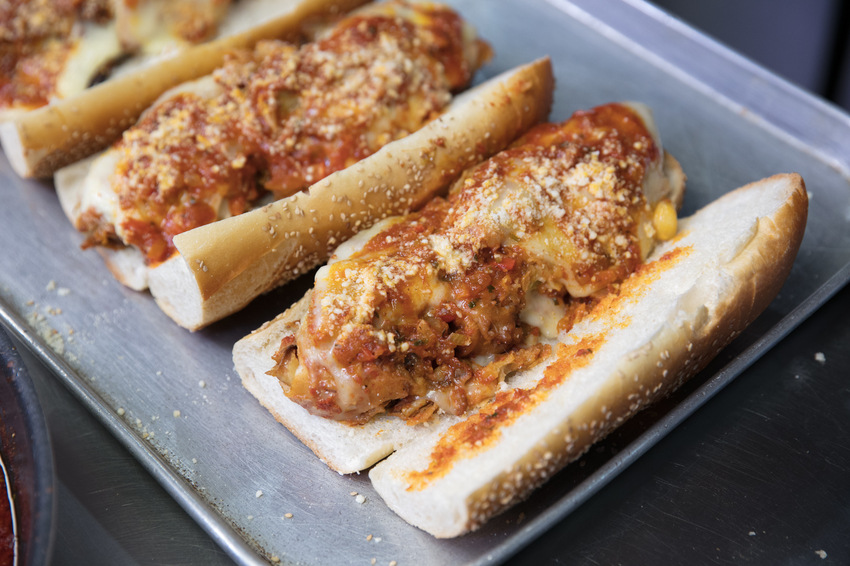 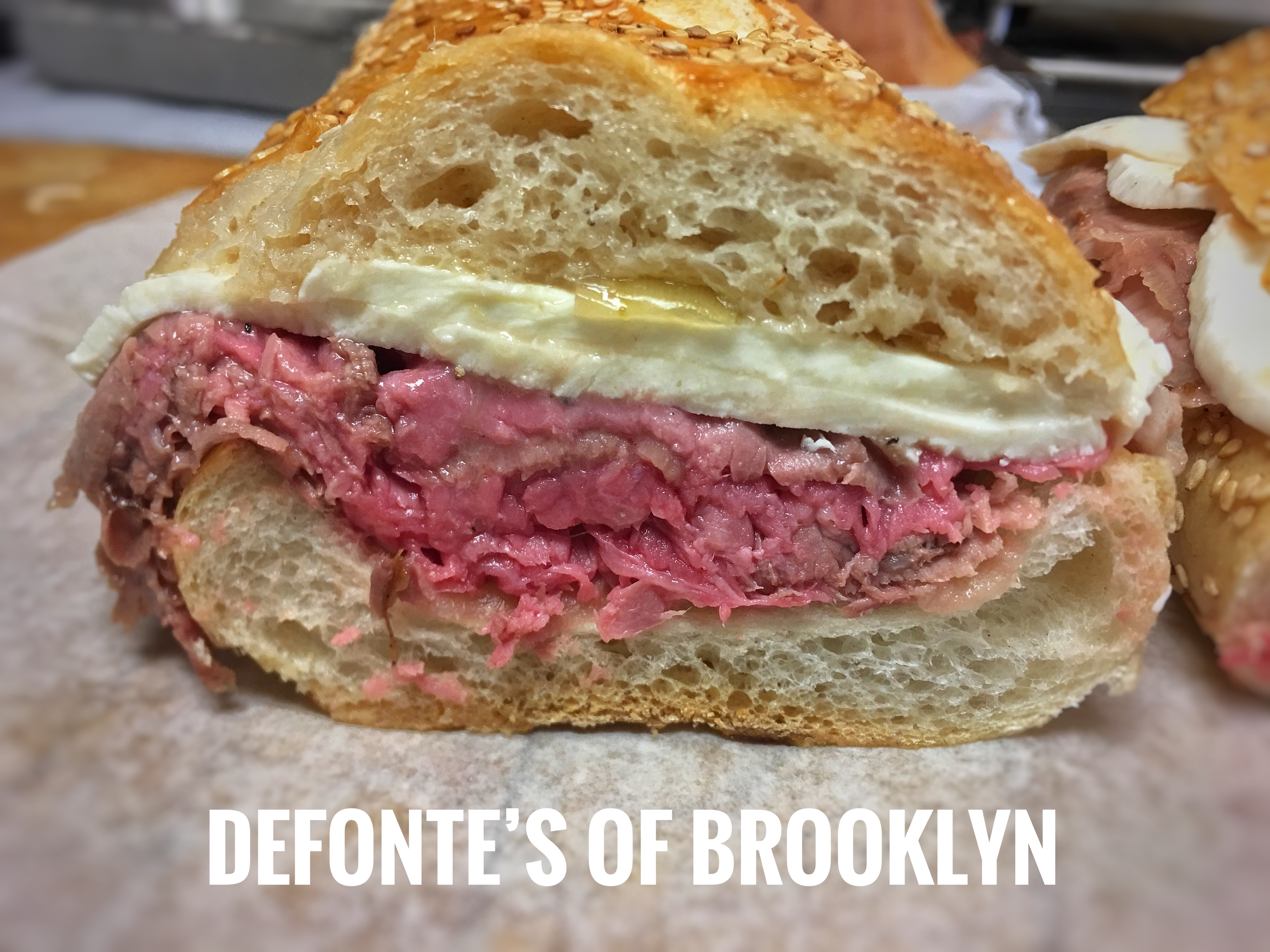 The Vitals:
the spot: Defonte’s 379 Columbia St Brooklyn NY 11231
the eats: Eggplant Parmesan sandwich
the bucks: $9
the full nelson: the NYC sandwich place you dream of going to the moment you get off the plane

Defonte’s is THE TRUTH. What does this mean? I have been chasing a real deal Italian sandwich deli all my life. And I’m gonna keep chasing, BUT I know that Defonte’s will give me the most genuine experience I could ever ask for. But you don’t have to take my word for it. Just ask the city utility workers and cops that line up for a meatball parm at like 10 in the morning. They know how good that sandwich is gonna be in like two hours. The only thing more fun than eating this spectacular eggplant parm, that gets a deep fry and comes out closer to tempura that your classic renditions, are the myriad of other spectacular sandwiches Defonte’s is slinging up. Oh and then there is Nicky and Larry, two of the most memorable chefs Cheap Eats has ever had – these guys kept me entertained! Knowing that part of my DNA is a diehard meat n potatoes Midwesterner, Larry set me up with a roast beef sandwich pictured above. How amazing was it? Let’s put it this way: Paulie Giannone aka Paulie Gee, the pizza guru whose Greenpoint pizza joint has now spread to Miami, Chicago, Ohio, and Baltimore made it the first stop on his NYC roast beef tour, along with fellow Austinite Brandon Hunt of Via 313 Detroit style pizza. Game attracts game and Defonte’s is at the top of the Italian deli sandwich game. 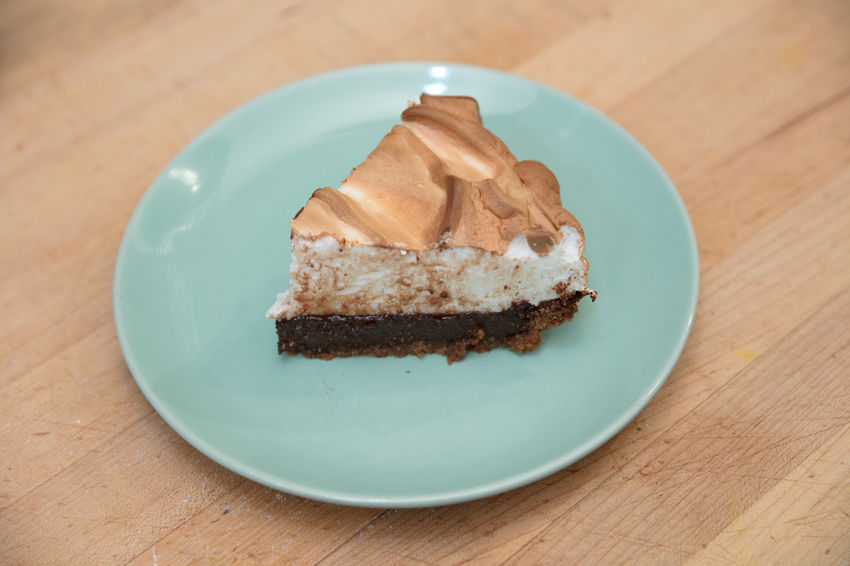 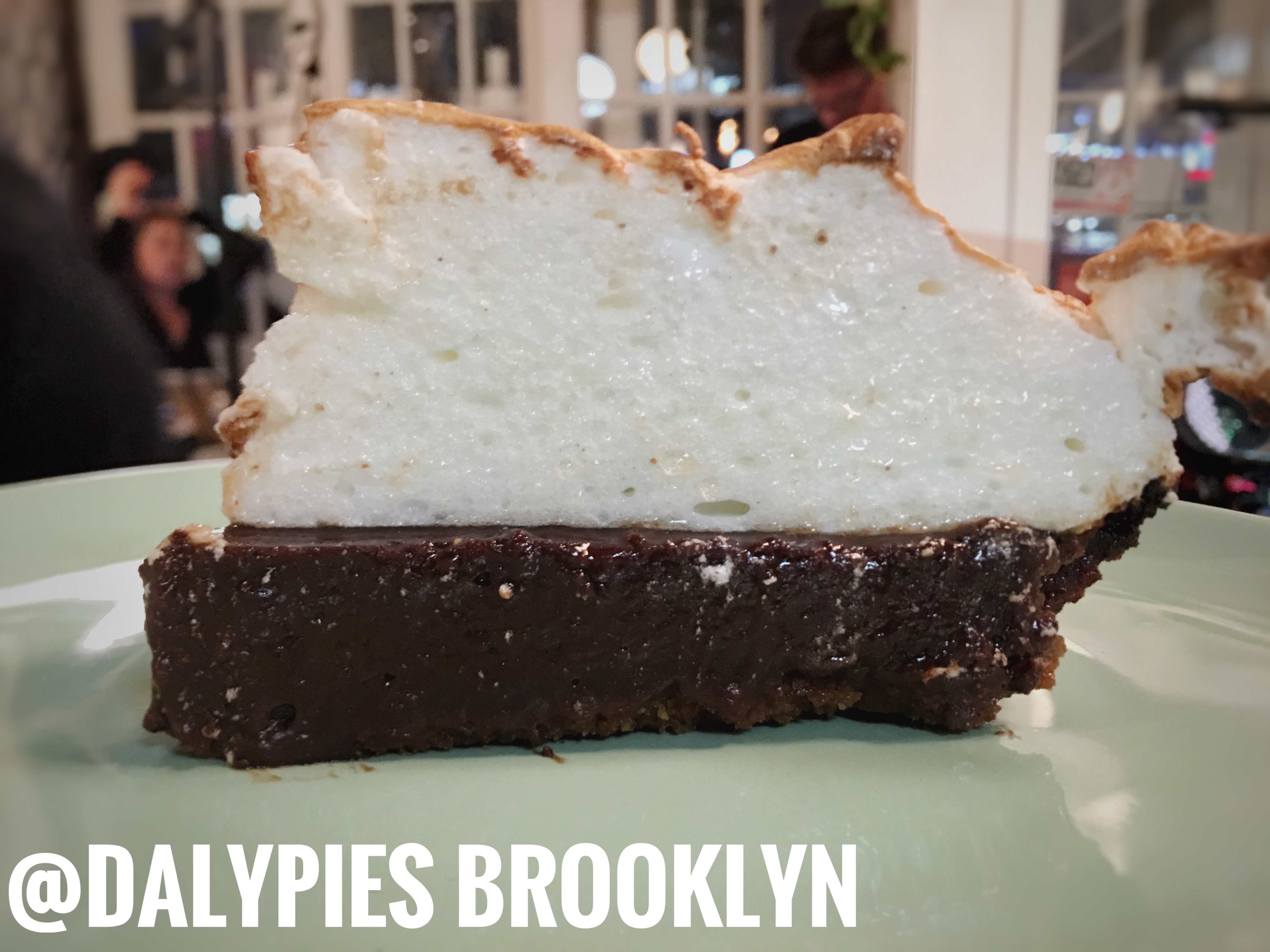 The Vitals:
the spot: Daly Pies 665 Vanderbilt Ave Brooklyn NY 11238
the eats: Smore’s Pie
the bucks: $5
the full nelson: this pie is supremely superior to the whole camping and smore’s thing . . .

Frankly I had been on a roll in Brooklyn but NYC don’t sleep, not even on snack and so went my snack at Daly Pie’s. If Tom’s and Defonte’s speak to the old school side of Brooklyn, then Daly Pies speaks to that part of New York where the young bucks come to this town to make it or break it. Meghan Daly did a little bit of both as she broke my expectations of what smores could be in pie form and let me tell you she is definitely making it because her pie shop ain’t no one trick pony. You chocolate lovers should be satisfied with the Smore’s pie but look out for the Maple Pecan, Apple Crisp and Caramel Apple. And in case you chocolate lovers are looking for more chocolate, there is a Chocolate Guiness pie and one called a Case of the Mondays where she combines chocolate and potato chips. All of a sudden Monday’s are sounding awesome right now. 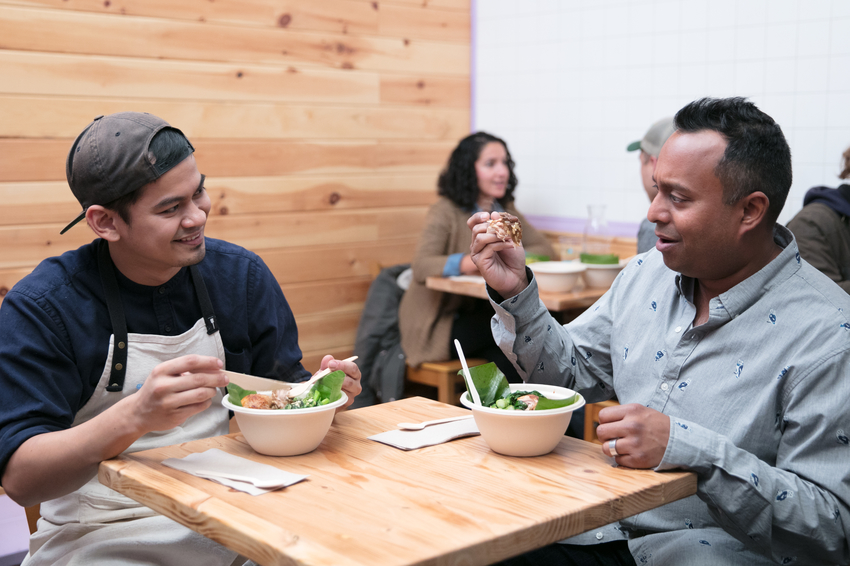 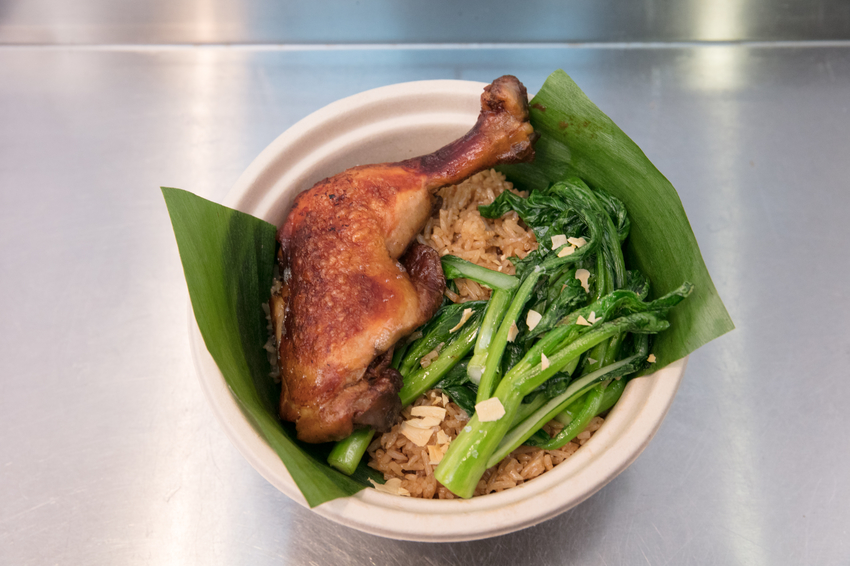 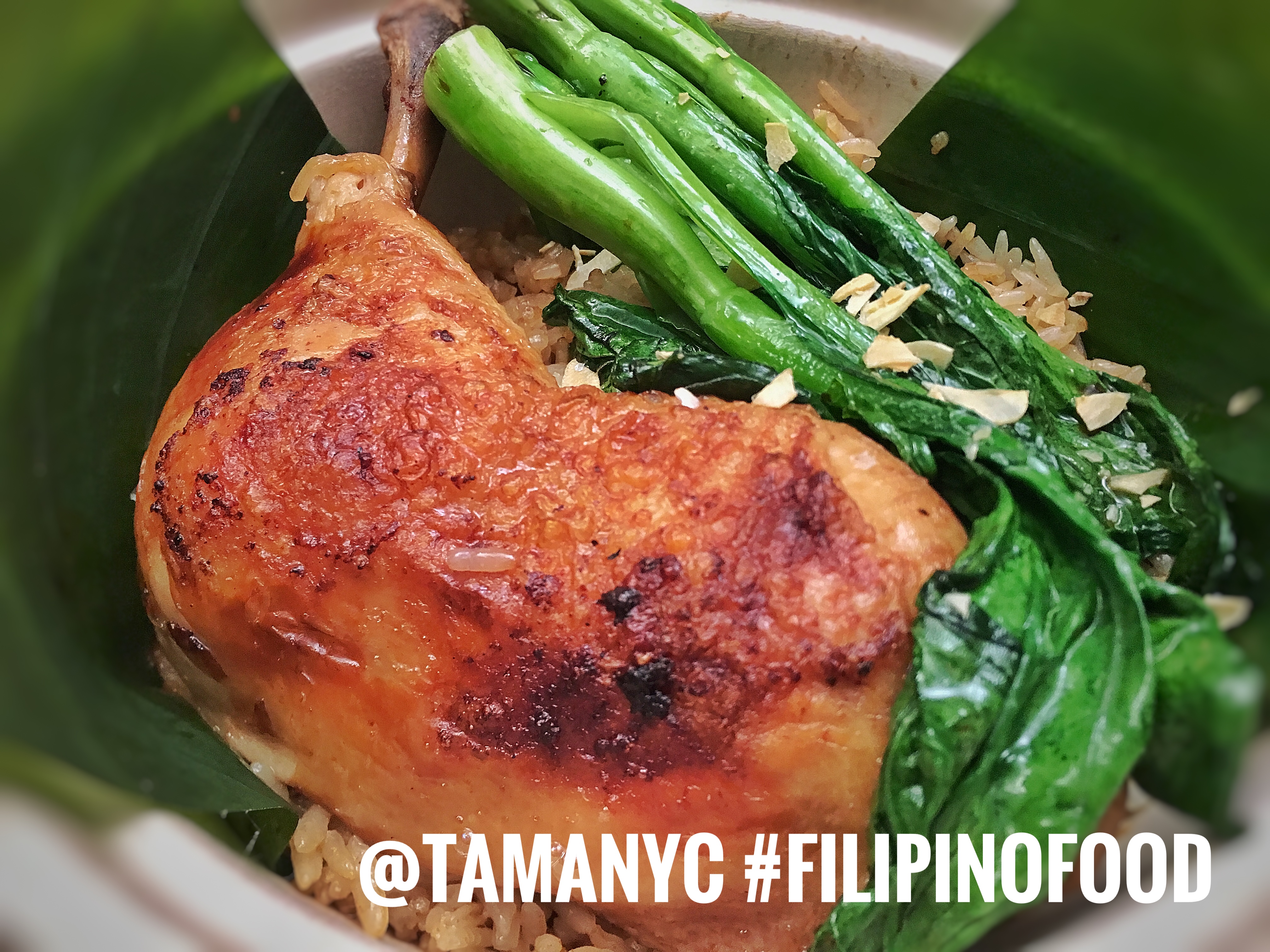 The Vitals:
the spot: Tamá Restaurant 147 Lewis Ave Brooklyn NY 11221
the eats: Chicken Adobo
the bucks: $12
the full nelson: this whole Filipino food trend could really jump with duck fat in the mix . . .

In the world of food media, we are always on the hunt, or really just pumping up the next big food trend. And for the last few years, Filipino food has been exactly that. If you haven’t had Sisig and you love carnitas, well you need to. It is basically the meat from a Pig’s head that is first boiled till tender, fried till crispy and mixed with chili, lime, egg, and sometimes a little mayo. Yes, this food is rich and so was the chicken adobo I had at Tama to close out my day of Cheap Eats in Brooklyn. Now I have had some Filipino food that stopped even my ravenous appetite in its tracks like fried chicken skin served at a buffet. And while I love fried chicken skin, less is more. This is where the genius of Tama comes in: balance by way of technique. Granted, Tama’s Adobo increases the richness factor of chicken adobo by braising the meat in duck confit aka rendered duck fat, the final stage of crisping the chicken on a plancha(or flat top) not only delivers a crispy skin but also concentrates the flavors of the soy, anise, vinegar, chili marinade while cooking off the excess fat. I mean the beauty of chicken thighs is that you can always cook them a little longer because they are so rich to begin with. A little duck fat doesn’t hurt either. In the right hands, it might even push a hot new food trend to a whole new level. 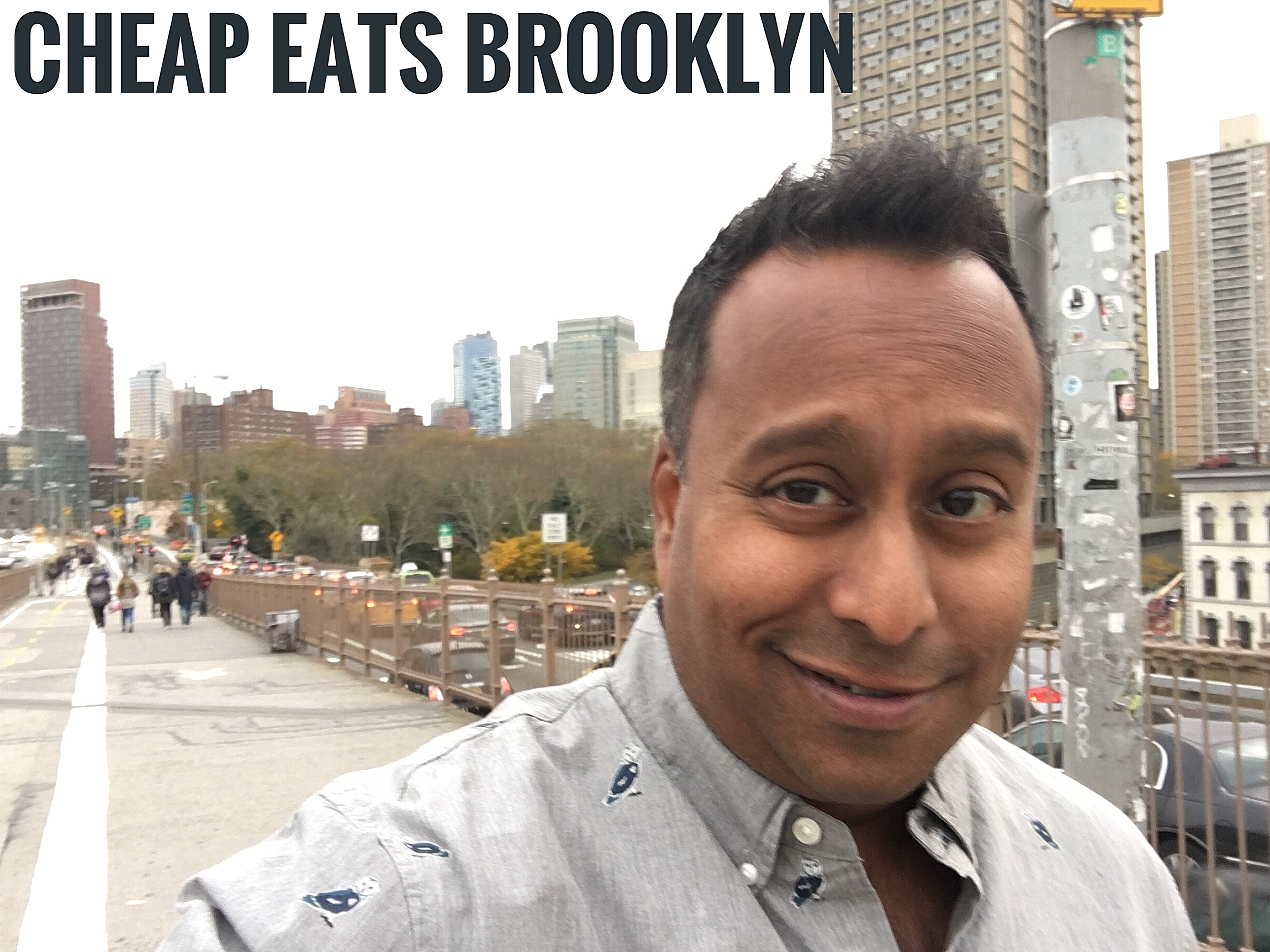 And THAT is how you do Cheap Eats in Brooklyn. But let’s be honest – there are so many great places in this epic borough of eating that I can’t wait to go back. Still the places we found on Cheap Eats Brooklyn perfectly describe why I left my heart in NYC – enduring restaurant legends and that evergreen drive for new chefs to come up with the next great thing. BK is a Cheap Eats treasure so don’t sweat the NYC rent . . . and just LIVE off the Cheap Eats! 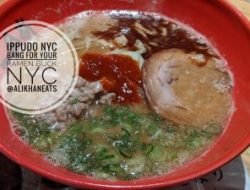