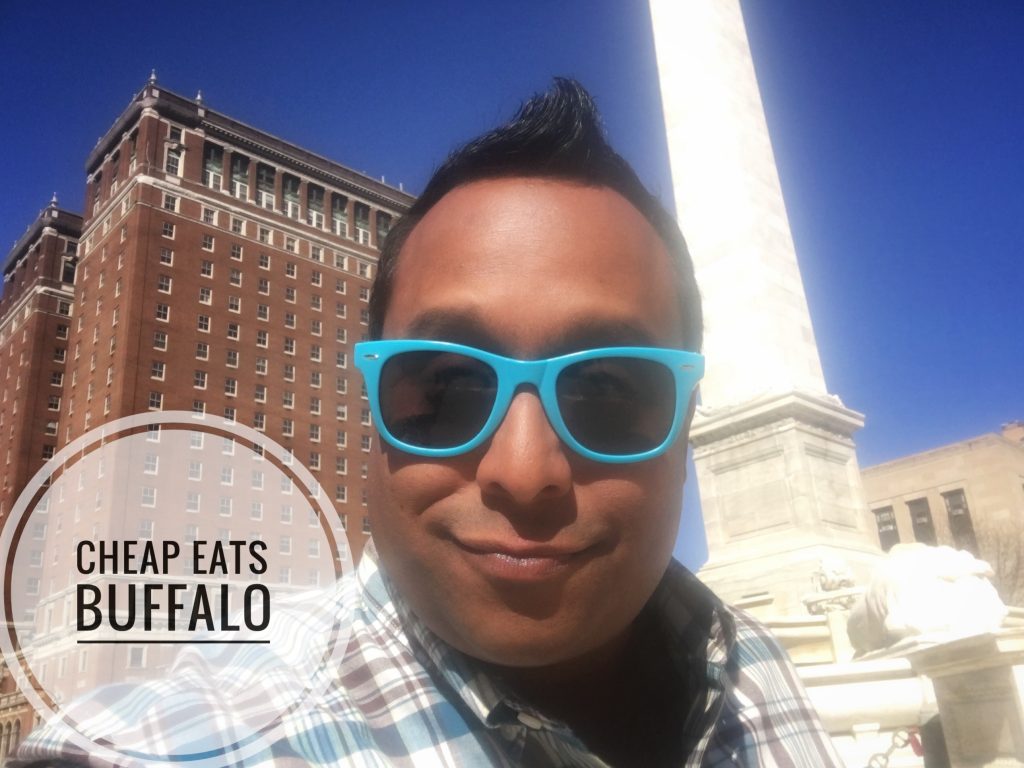 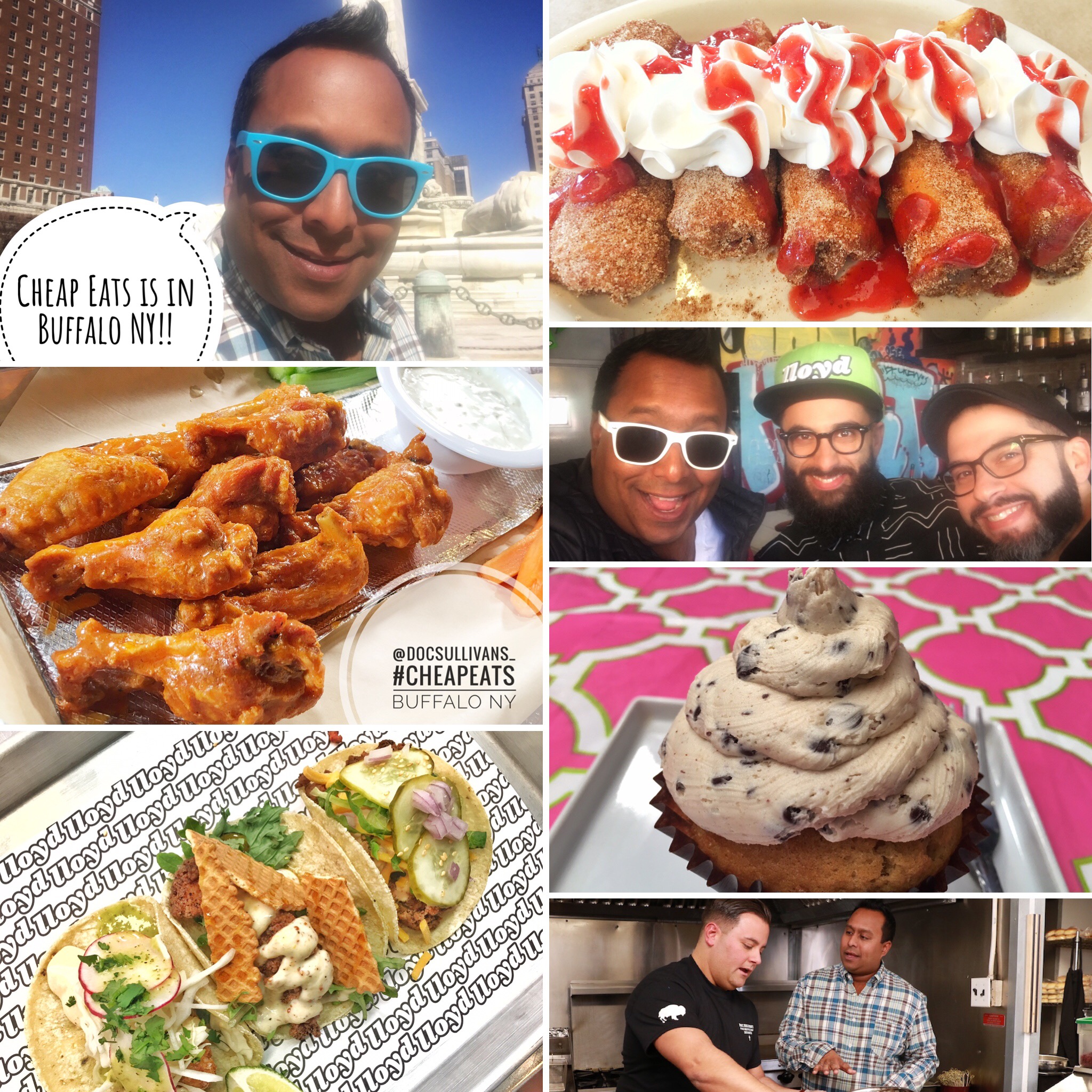 Welcome to Cheap Eats Buffalo, the season finale of Cheap Eats Season 5 and a huge strike off the Cheap Eats bucket list: I ate Buffalo wings IN Buffalo NY! You knew there would be wings but did you expect serious taco and cupcake game? I sure didn’t. Throw in some French Toast that were literally on a roll and you have one fine day of Cheap Eating in Buffalo. Well, enough of the chit chat, time to take one more bite out of Cheap Eats Buffalo! 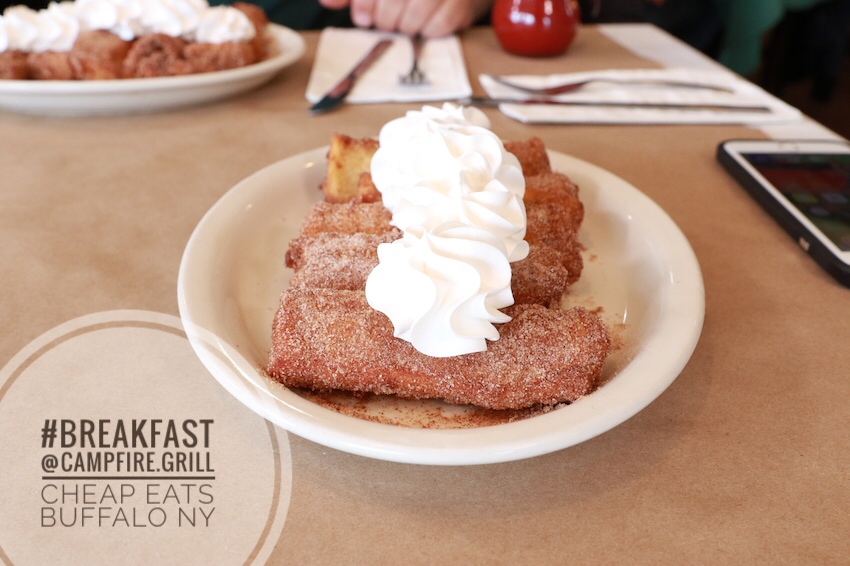 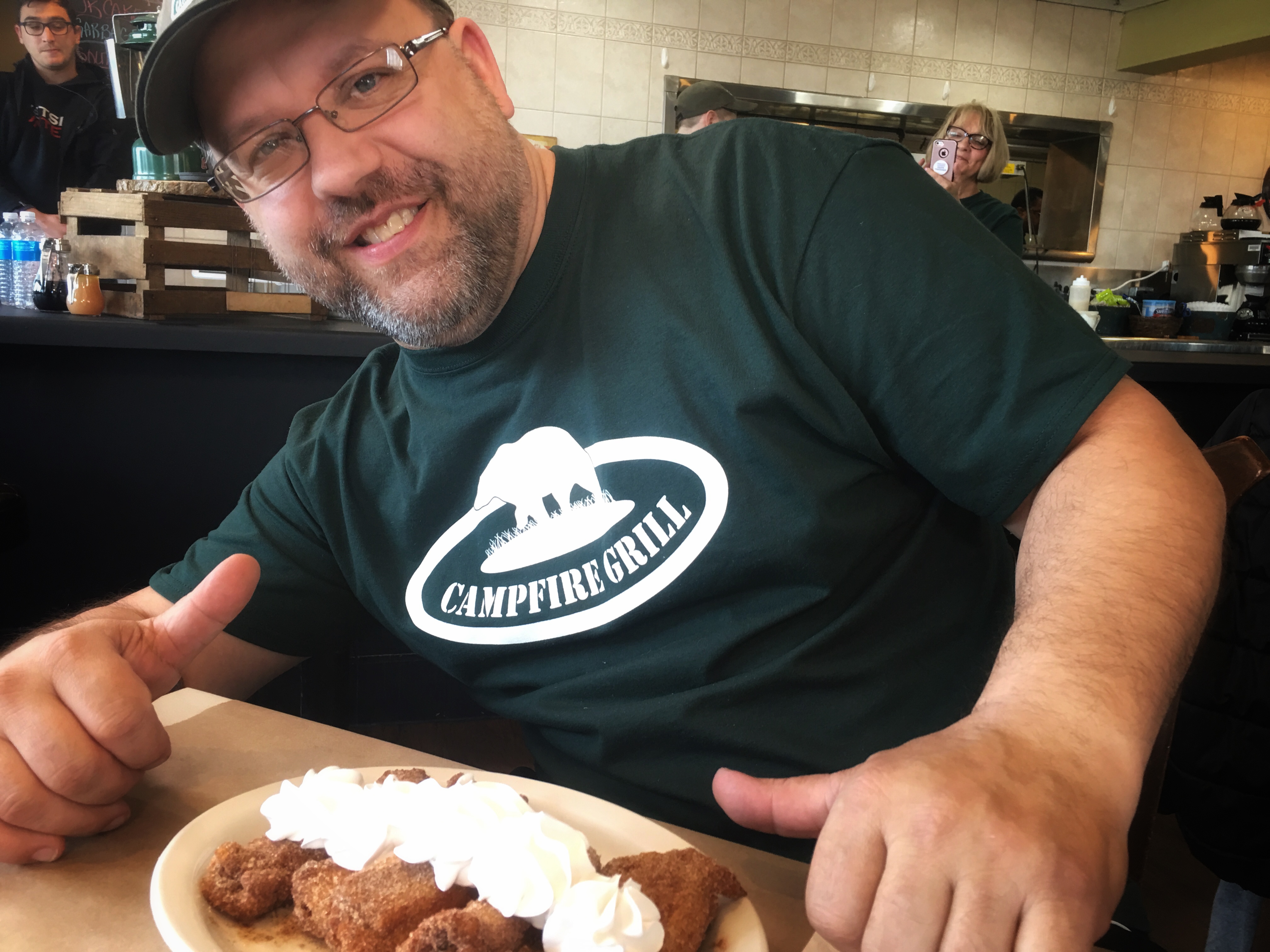 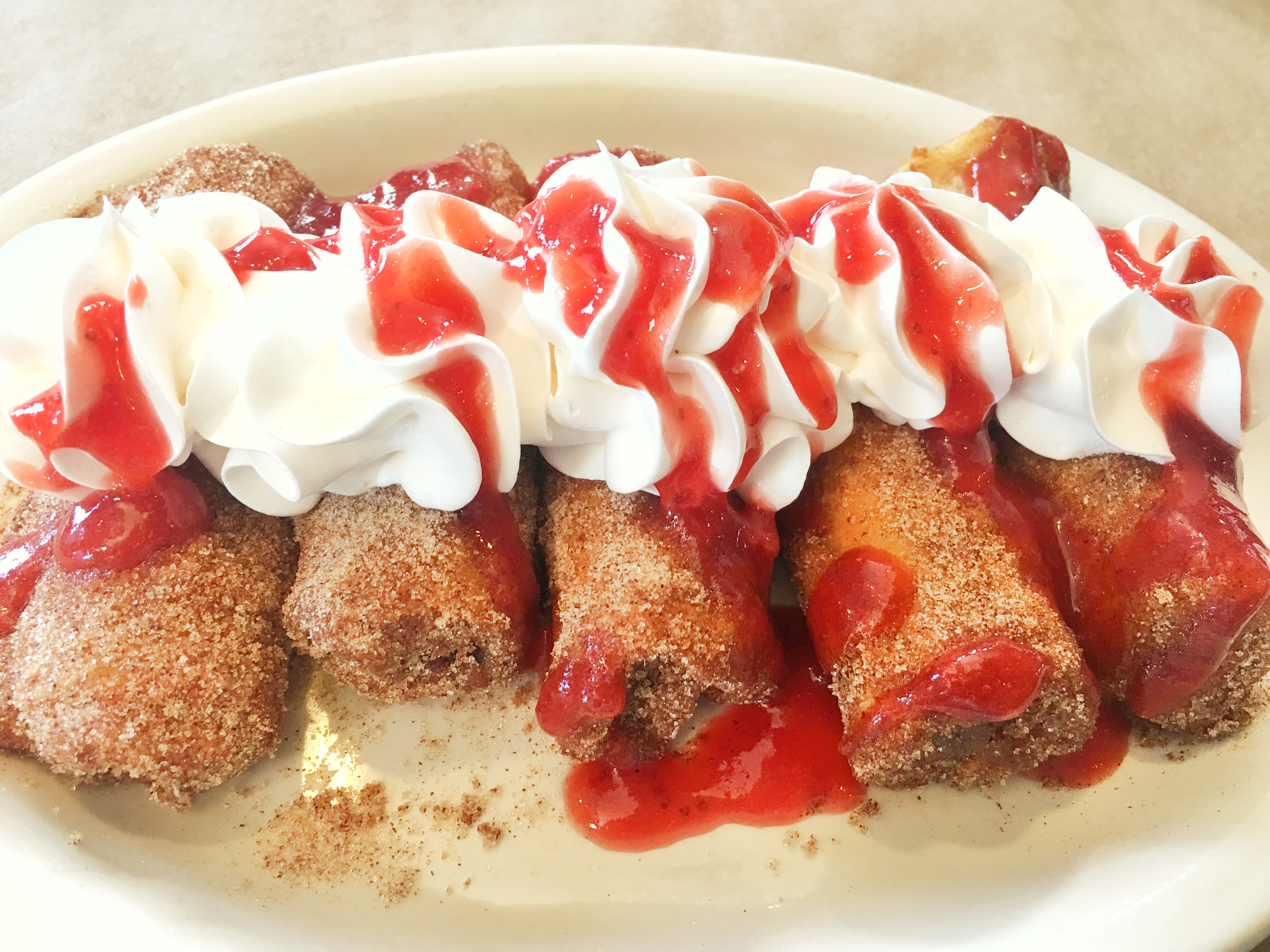 Campfire Grill isn’t exactly in Buffalo, it is in nearby Depew, but trust me that it’s still Cheap Eats Buffalo adjacent. Chef and owner Scott Gargiello was toying with the idea of a breakfast appetizer when he came up with the Griddled Toast Logs. If it wasn’t for the smothering of whipped cream and strawberry sauce, this could very well be breakfast finger food. Beyond this solid plate of cinnamon and sugar coated fried goodness for a fair price of $8.50, Campfire Grill is a truly beloved local’s diner. When I posted about this episode on Facebook, I saw the loyal customer love erupt in the comments section. So when you do come to Campfire Grill, brush up on how the Bills and Sabres are looking because this Cheap Eats Buffalo breakfast joint is a true locals hangout.

Currently, at least at the time of this posting, the Sabres are 4th in the Atlantic. 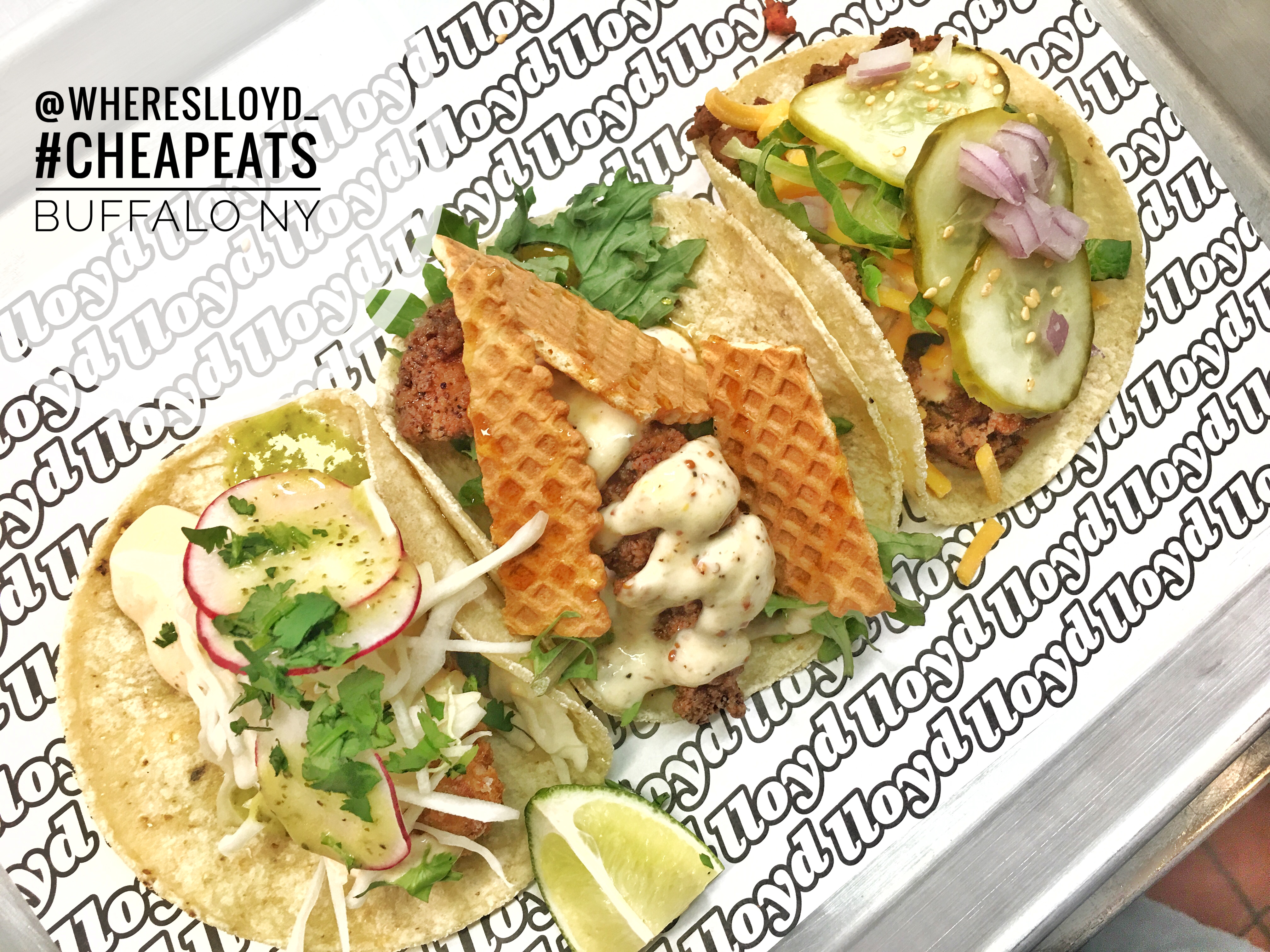 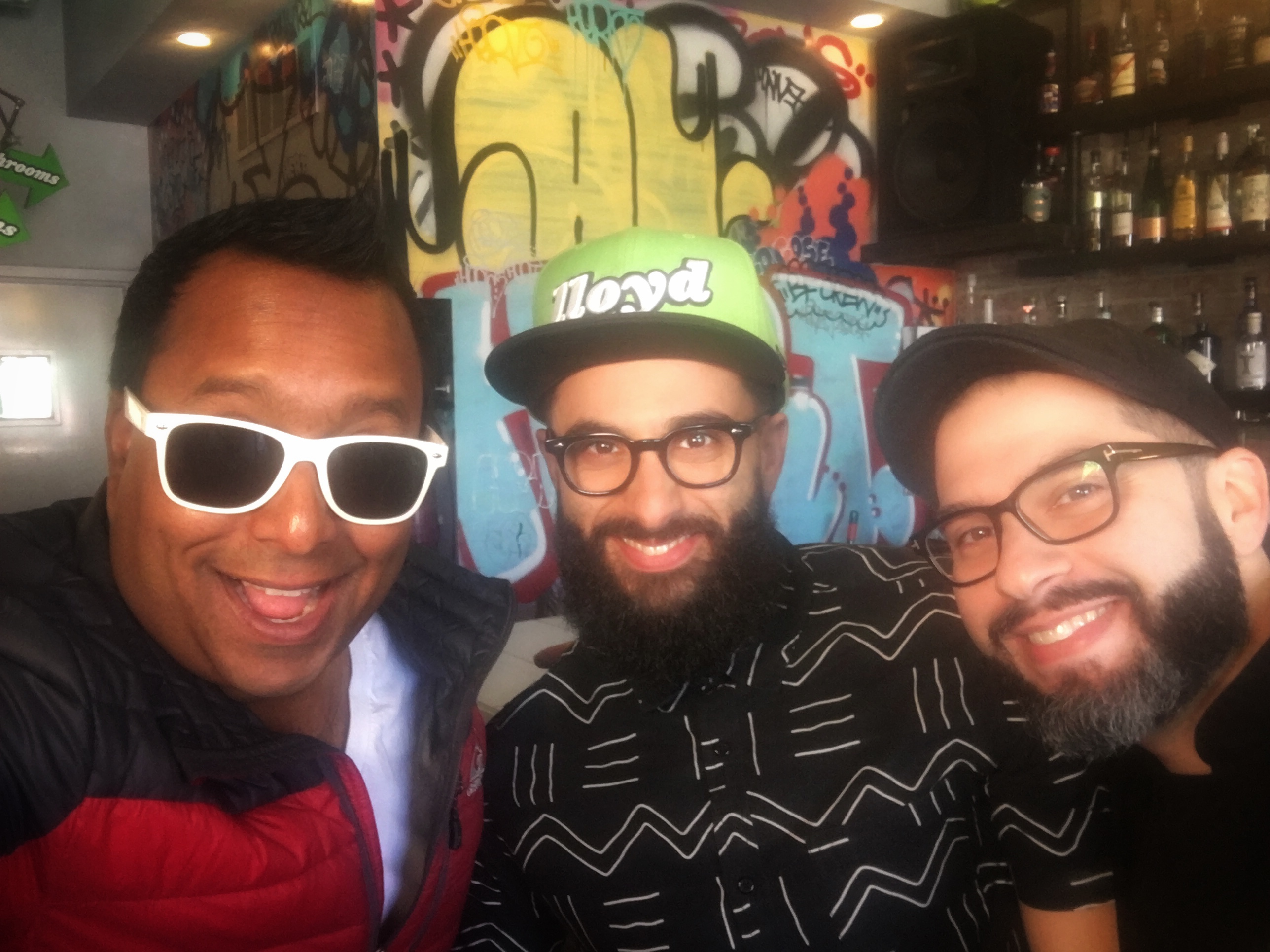 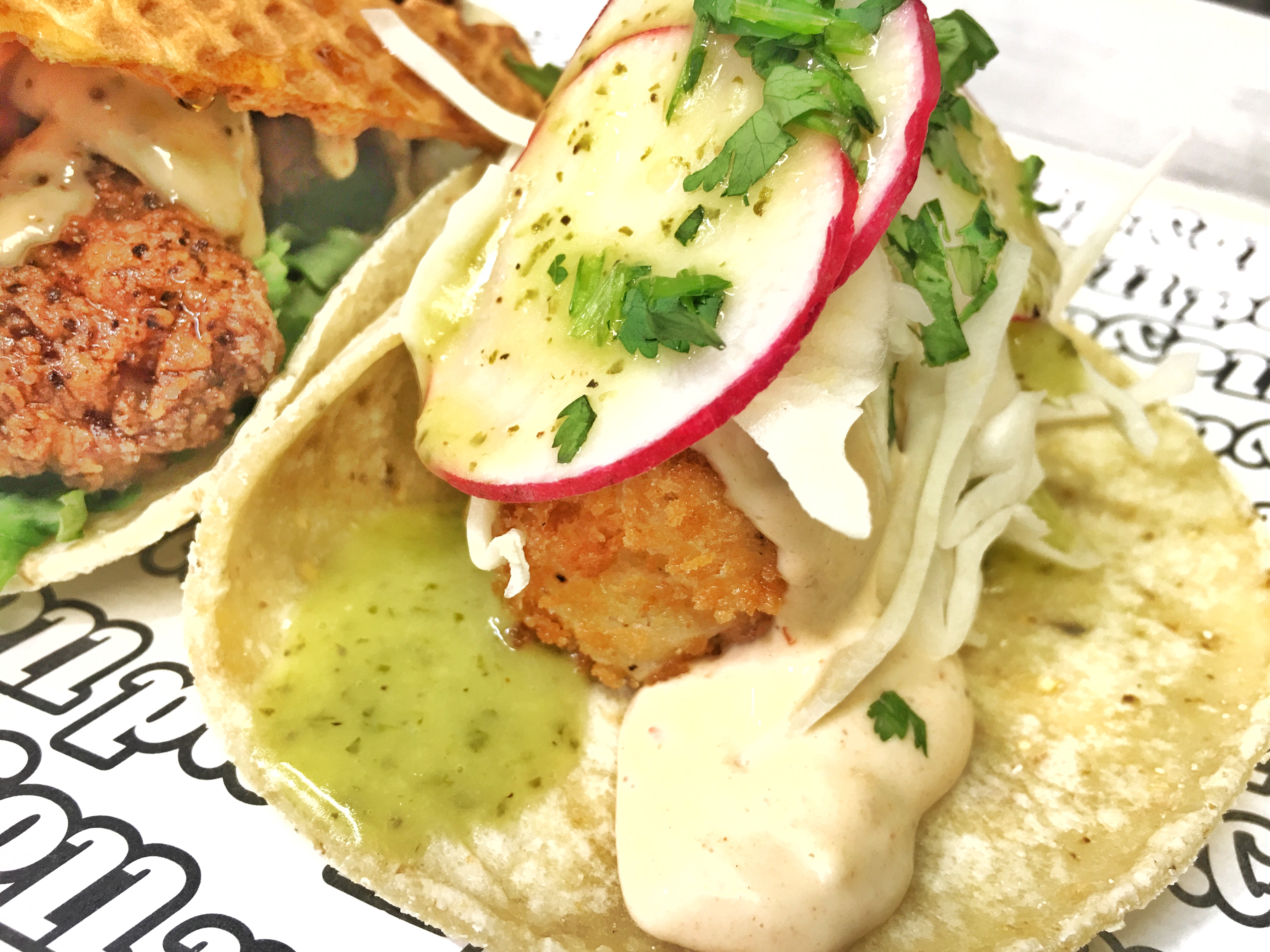 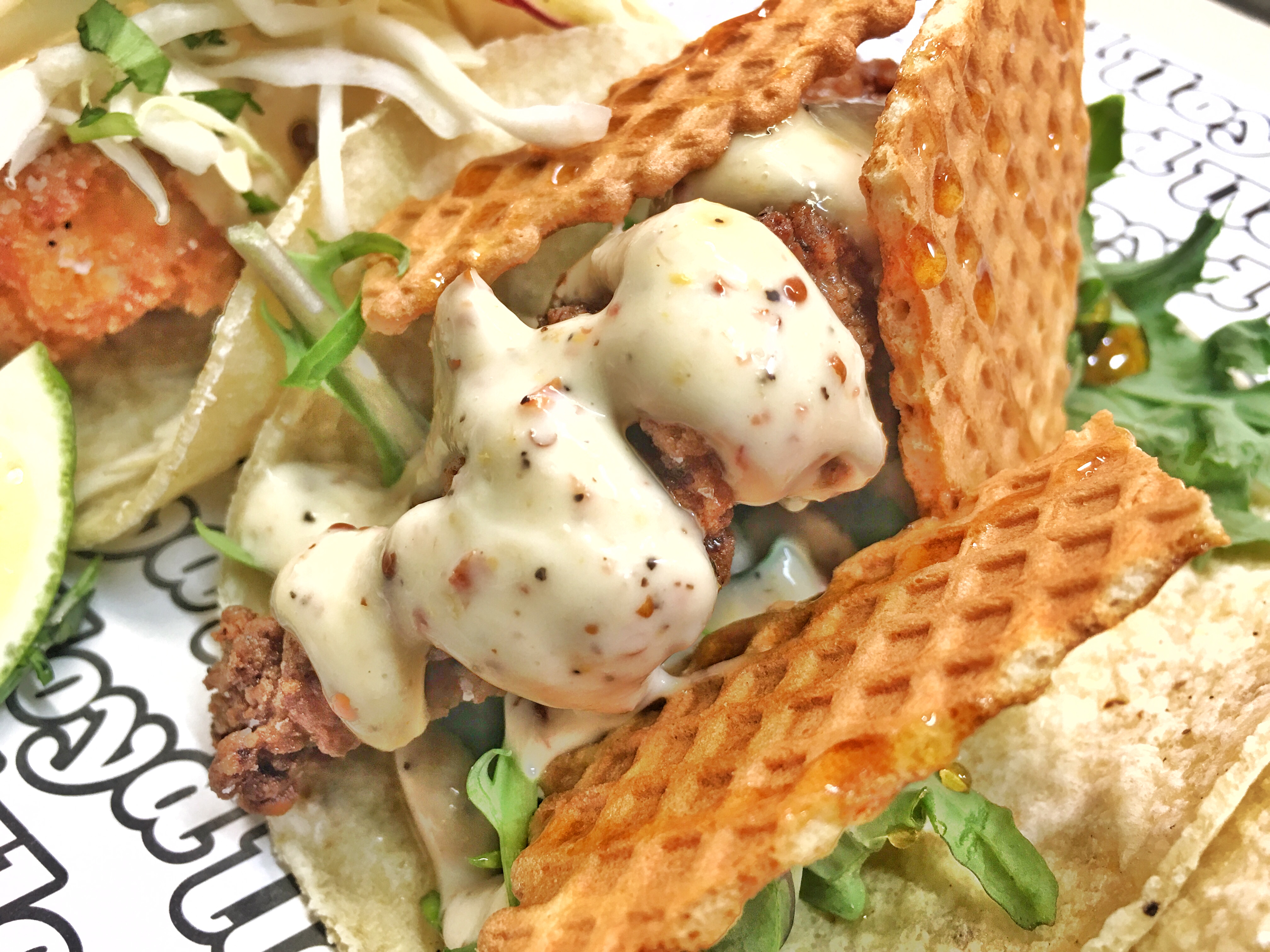 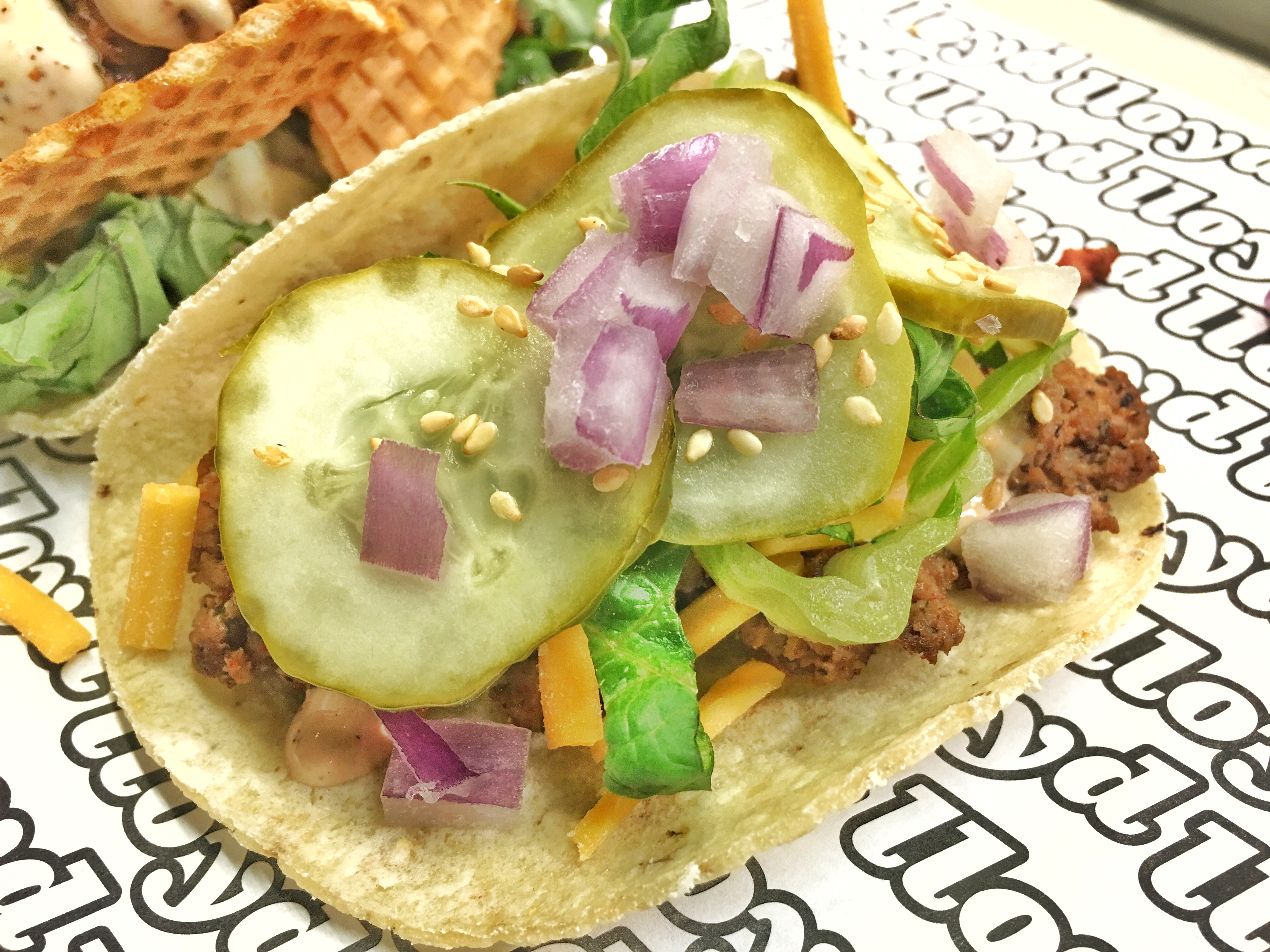 Cheap Eats Buffalo was more than just finding 4 meals for $35. It was about discovering a food scene that is happening and evolving and nothing says that more in 2018 than an innovative taco joint. In a relatively short amount of time, tacos have become as commonplace as the hamburger and frankly make a case for being more affordable. Now I’m used to $1 street tacos from the streets of Los Angeles and while nothing is gonna beat that deal outside of Mexico, there is certainly room for handheld fried chicken and waffles for $3 and change. Which is exactly what you get with the Dirty South Taco. More traditional is the Crispy Fish Taco, which features Wild Alaskan Pollock. The Big Lloyd should remind you of the Big Mac on looks alone as this taco is adorned with special sauce, lettuce, cheese, pickles, onion and sesame seeds. Lloyd does one up Mac in the beef department, this taco features grass fed ground beef.

While a total deviation from the street tacos of Mexico City, the tacos of Lloyd’s is a firm statement that Mexican food is being embraced in all corners of the US, of this, I am quite sure. I’m also sure that Pete Cimeo and Chris Dorsaneo, the guys who started Lloyds, are indeed true Buffalo food pioneers: Lloyd’s was the city’s first food truck. As I look back on my lunch for Cheap Eats Buffalo, more astounding than getting three distinct and inventive tacos is the revelation that food culture in America is changing coast to coast and more than likely, it’s happening on a tortilla. 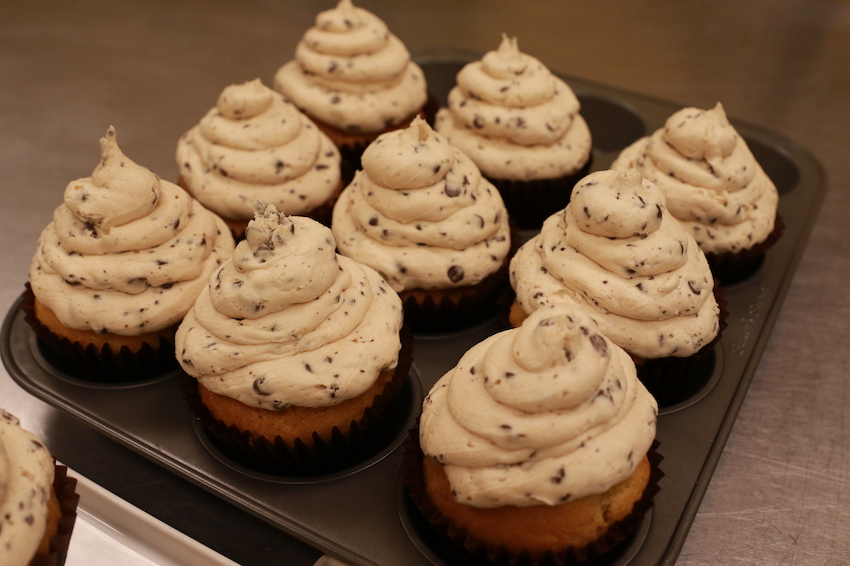 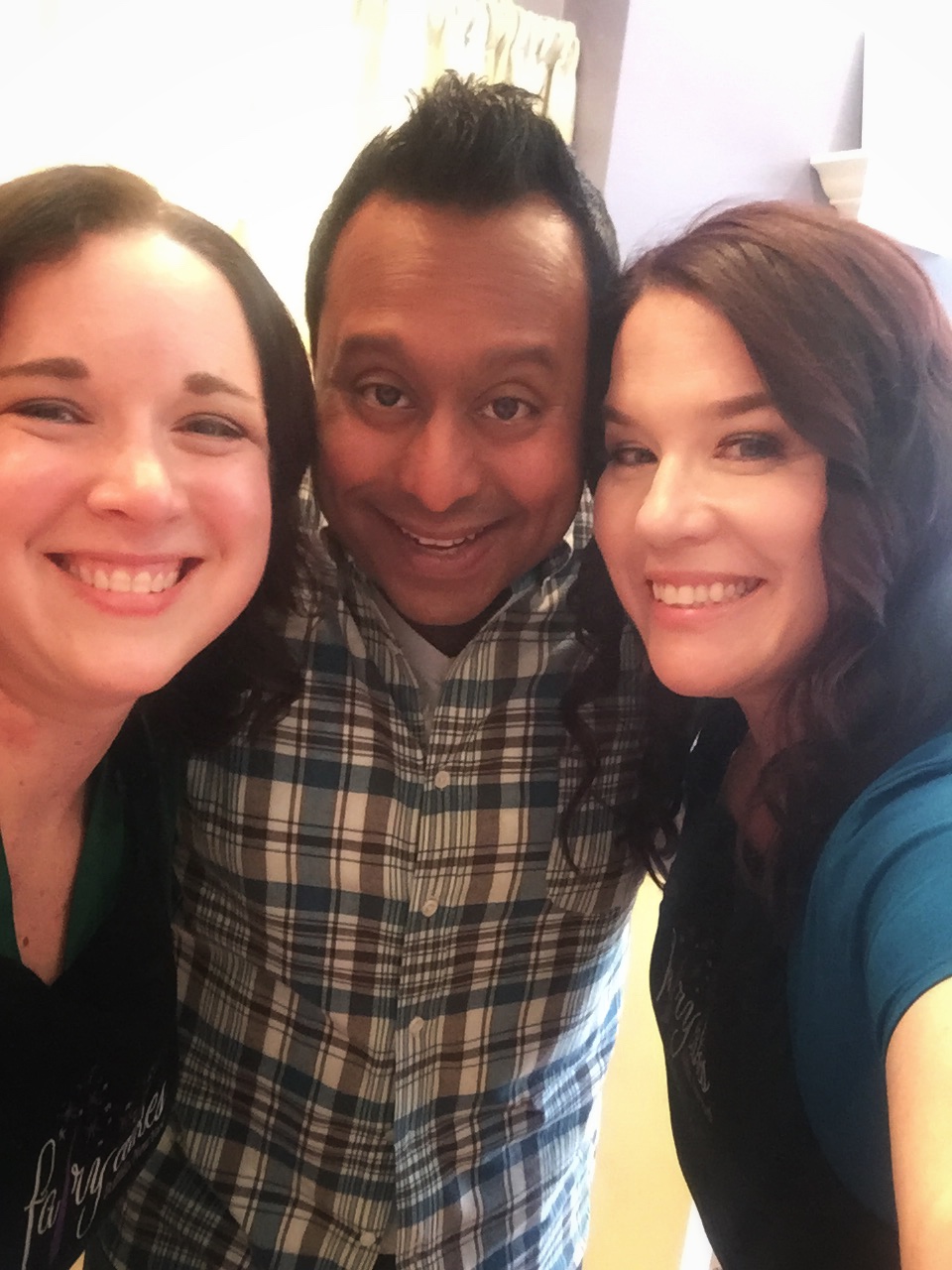 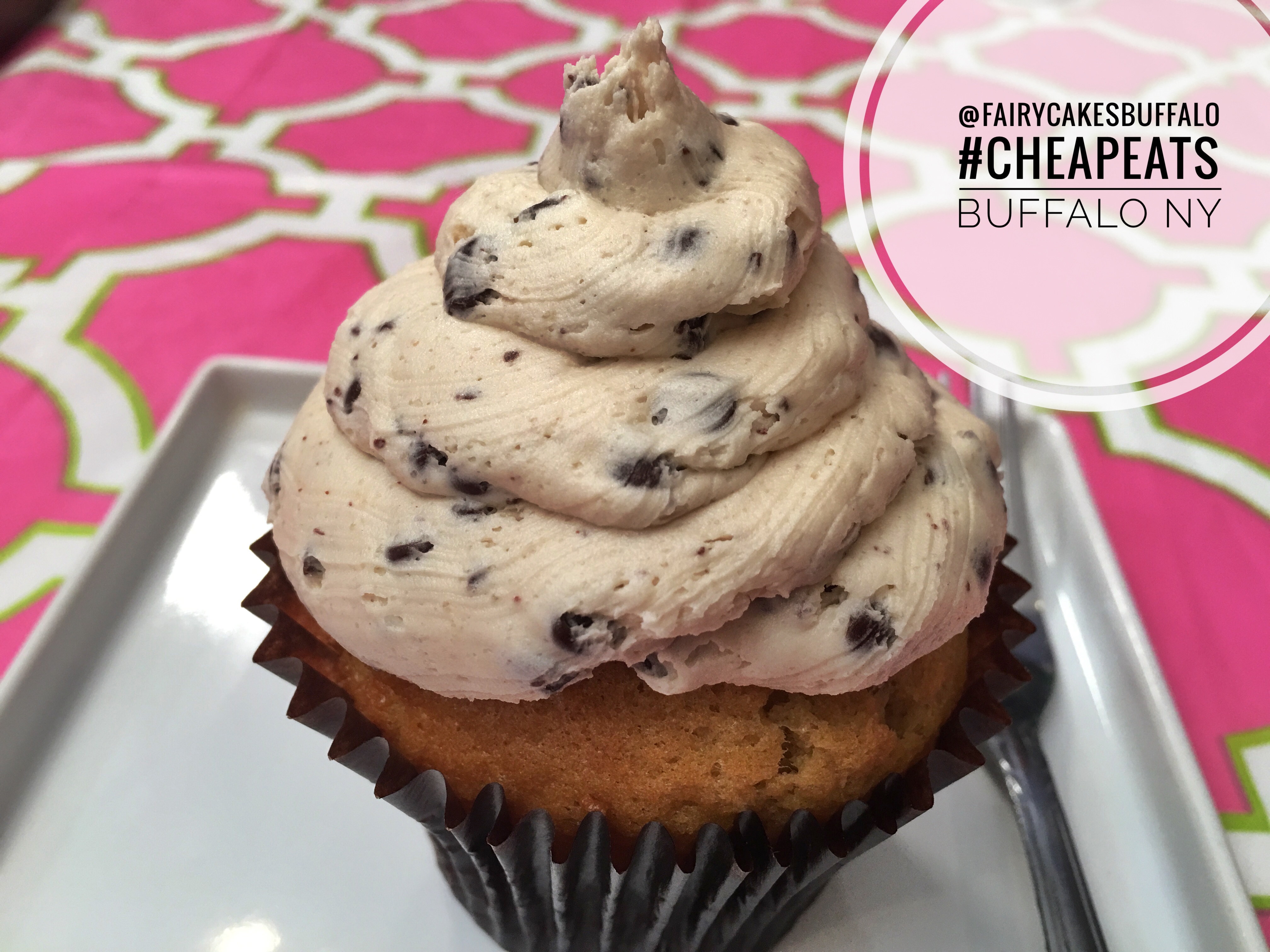 No up and coming food scene is complete without the requisite bespoke cupcake bakery, so for Cheap Eats Buffalo, that meant a snack stop at Fairy Cakes. The sweet creation of longtime friends Kelly Audette and Mo Torpey, Fairy Cakes rose from the ovens in 2006 first as a home bakery before rising to a full blown brick and mortar in 2012. I love chocolate, so the Chocolate Chip Cookie Dough was a no brainer. Reminiscent of the Brookie from Pint Size Bakery(Cheap Eats St. Louis), the Chocolate Chip Cookie Dough Cupcake is a hybrid dessert where a chocolate chip cookie becomes the base of a brown sugar cake cupcake and topped with a chocolate chip cookie dough buttercream. I assume you are drooling right now. Everything about this $3.50 cupcake is marvelous but the mixing of an eggless cookie dough into vanilla buttercream frosting was truly a stroke of sweet genius. No surprise here that these two ladies won Cupcake Showdown. Nope, not at all. 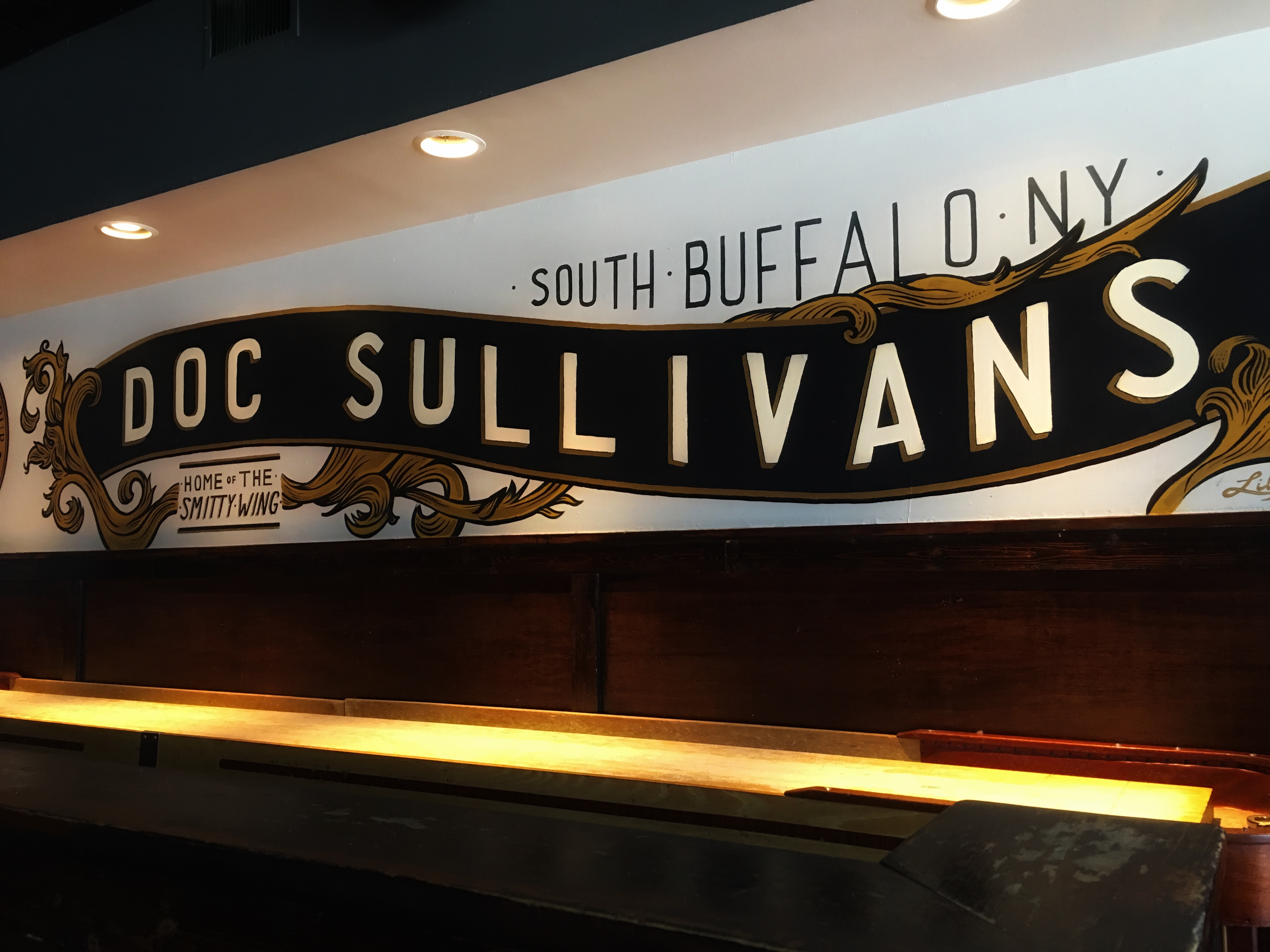 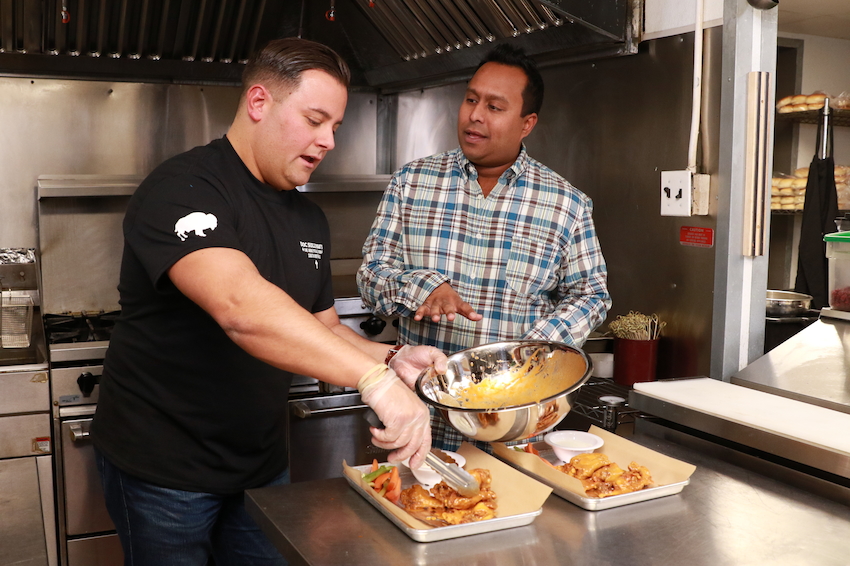 Chef Tommy mixing the wings in the sauce 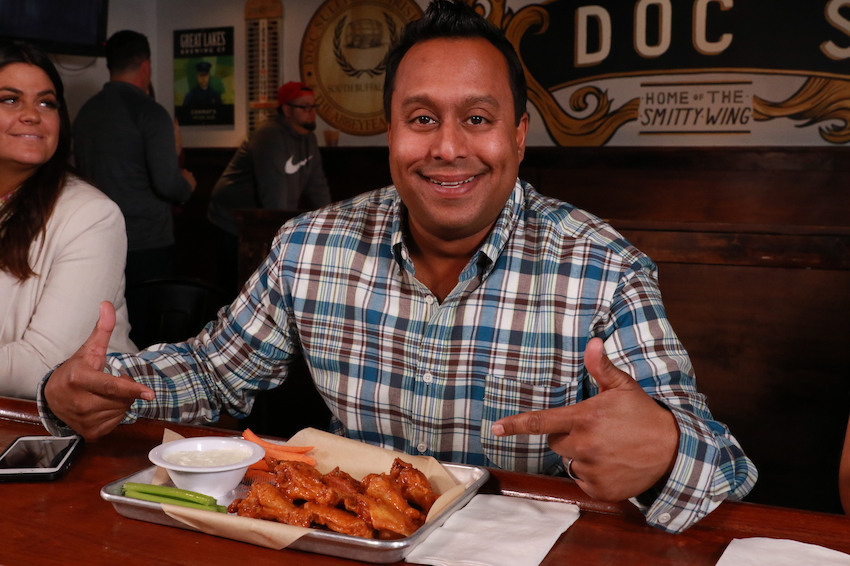 Ali posing for a picture before eating the wings

I mean, how could I NOT get Buffalo wings in Cheap Eats Buffalo? With no shortage of options, Buffalo NY is THE place for Wing snobs to go for their wings. The only hard part was choosing. There are famous places for wings in Buffalo but our call was to hit a local’s spot called Doc Sullivans and they did me right. Owner Tommy Cowan is a Buffalo native whose career in the restaurant industry began at age 14 as a dishwasher. He has worked a lot of bars and bars are where wings are done the best. The wings at Doc’s are pretty traditional save for one key component: instead of Frank’s Red Hot sauce, they make their own and its kissed with a little cinnamon, nutmeg and a few other spices. Making wings ain’t rocket science but more often than not places overcook wings. And undercooked wings are grounds for a lawsuit. Expect the wings at Doc Sullivans to be well crisped on the exterior with juicy meat to the bone. $9.75 gets you 10 but believe me you might be getting a second round, budget be damned. Pro tip: try the Beef on Weck Wings, which is a play on the Beef on Weck, a classic upstate NY sandwich. These wings are coated in a horseradish aioli and peppered with caraway seeds – as good as the classic Buffalo style, maybe even better. 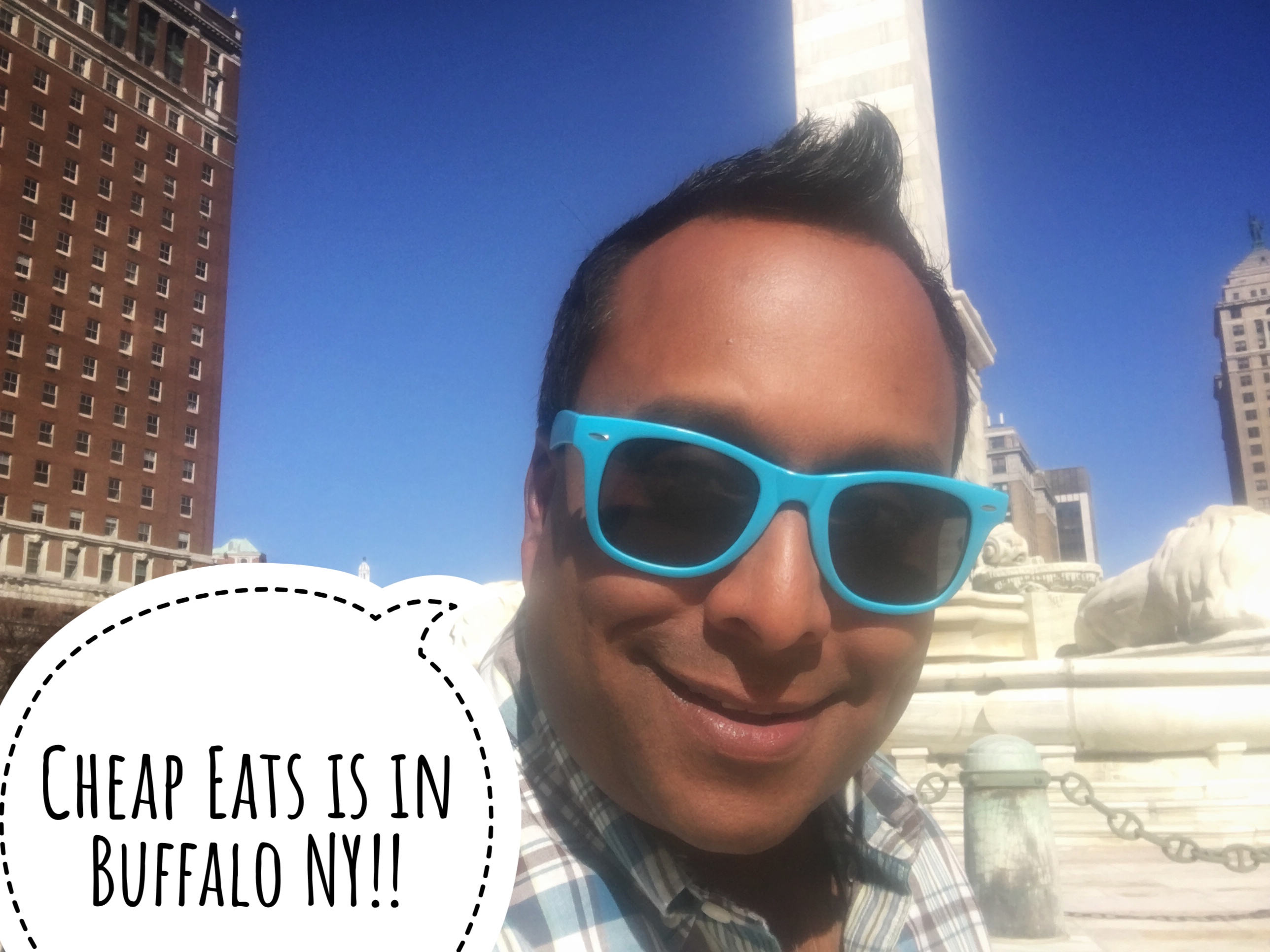 And that’s how its done in Cheap Eats Buffalo! Yes, the wings are a thing but this Upstate NY town has a taco game, a cupcake game and a diner that makes me consider trying camping again. A great town to close Cheap Eats Season 5 and one heck of an American food classic to cross off my bucket list: Buffalo wings in Buffalo.