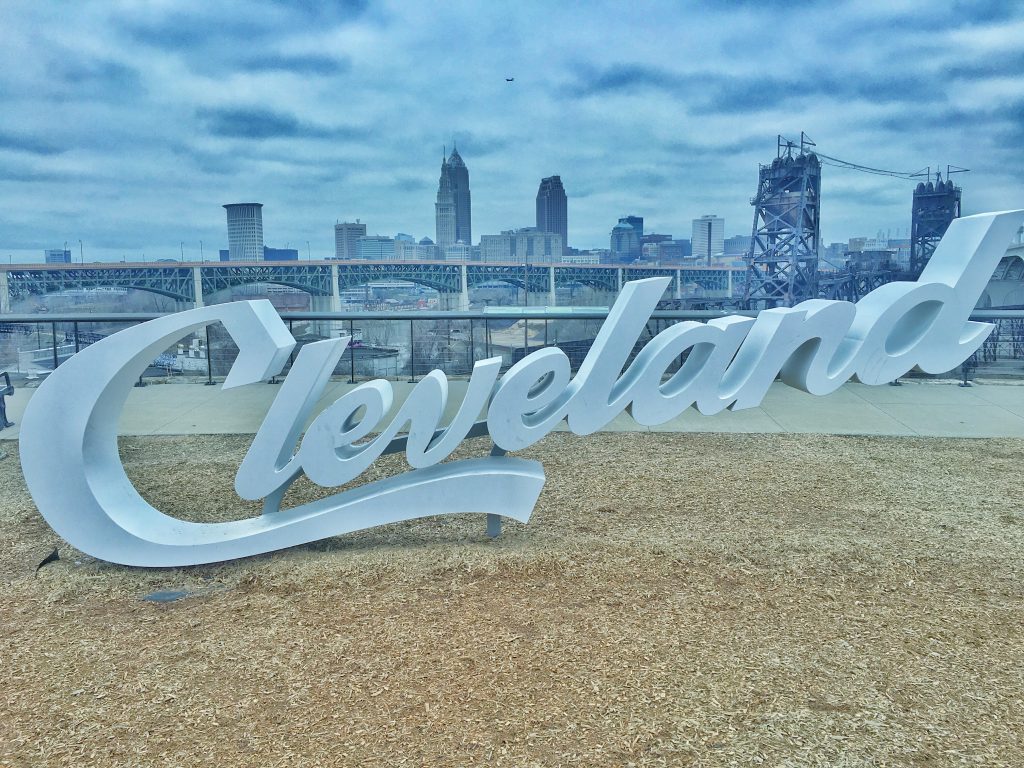 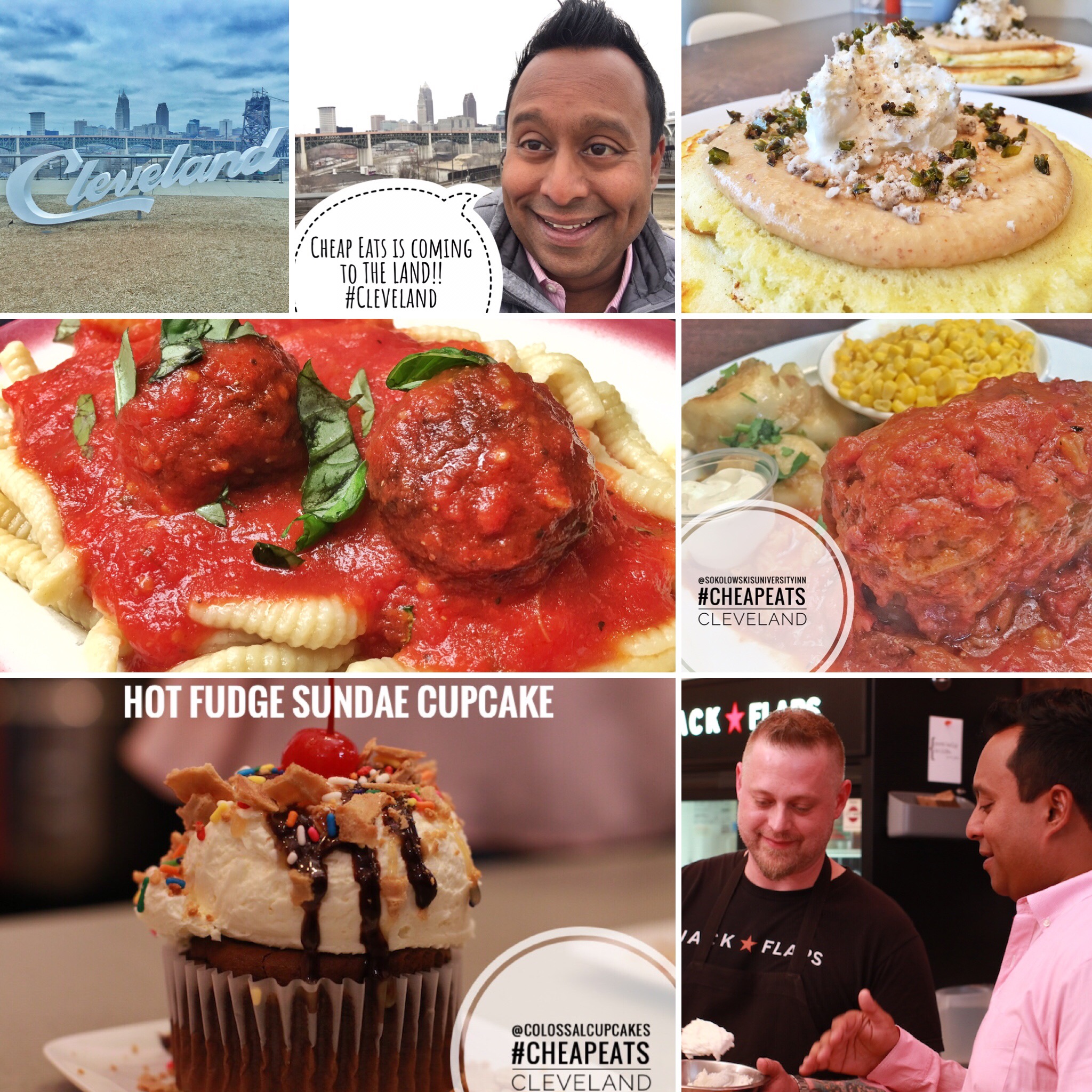 Once upon a time Cheap Eats went to the Land.

Cheap Eats Cleveland was a matter of time really. The idea to do an episode here had been floated around during Season 1. And before that, Cleveland has been on my food radar since 2012. I’m sure more than a few of you out there may not know that before Cheap Eats, I worked in Food Television on the production side. My good pal Jeff Mauro, whom I teamed up with to create our own food show back in the day, hosted a show similar to Cheap Eats called $24 in 24 that went to Cleveland. I was in charge of finding the restaurants and so I already had a connection here. Like my hometown of St. Louis, Cleveland has history, cool old neighborhoods and some celebrated food cultures to pair with both. A lot of times we focus on whats trending in the food world, well Cheap Eats Cleveland is anchored in the iconic. Ok Ok, enough talk, lets take another bite out of Cheap Eats Cleveland! 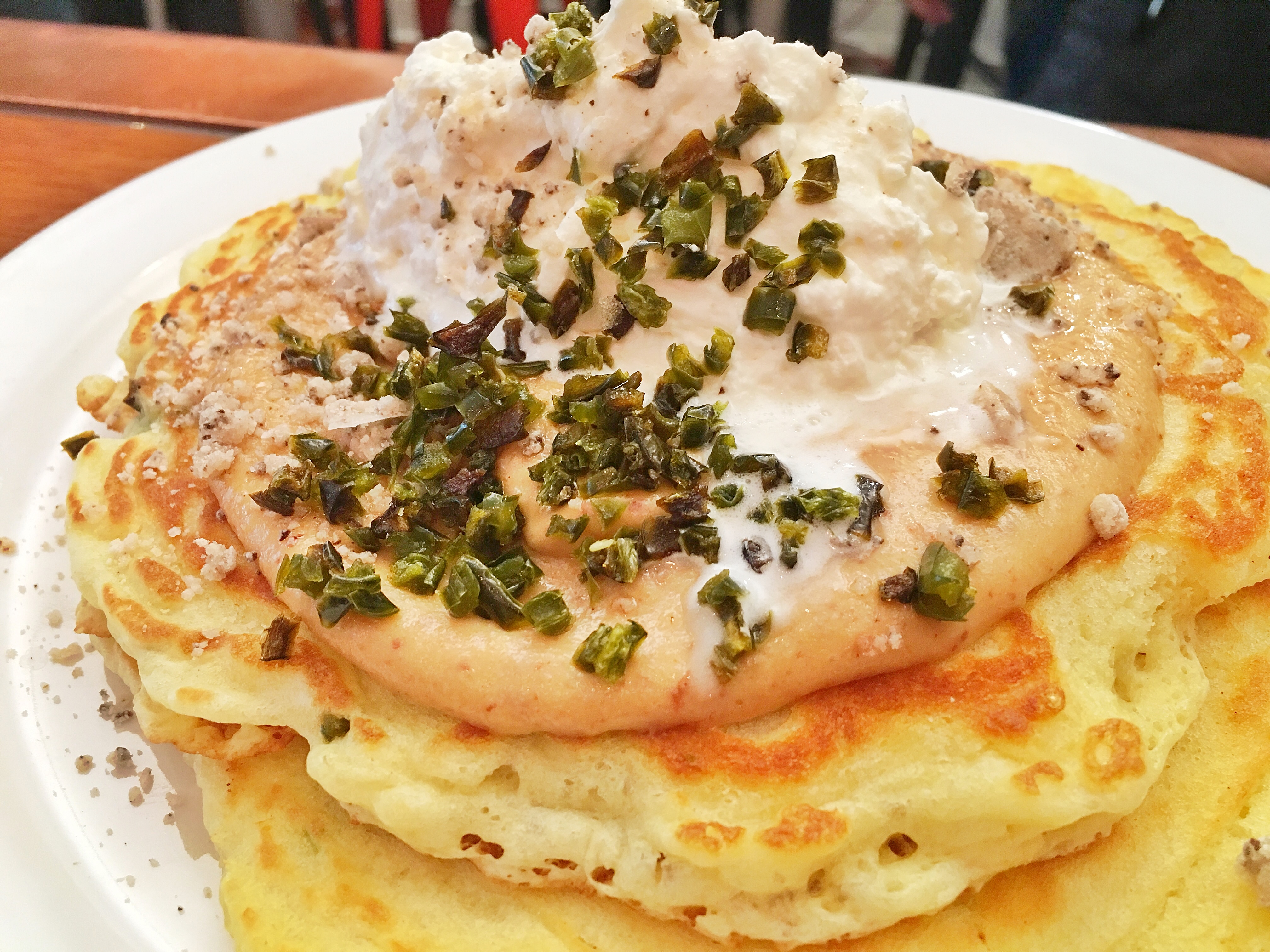 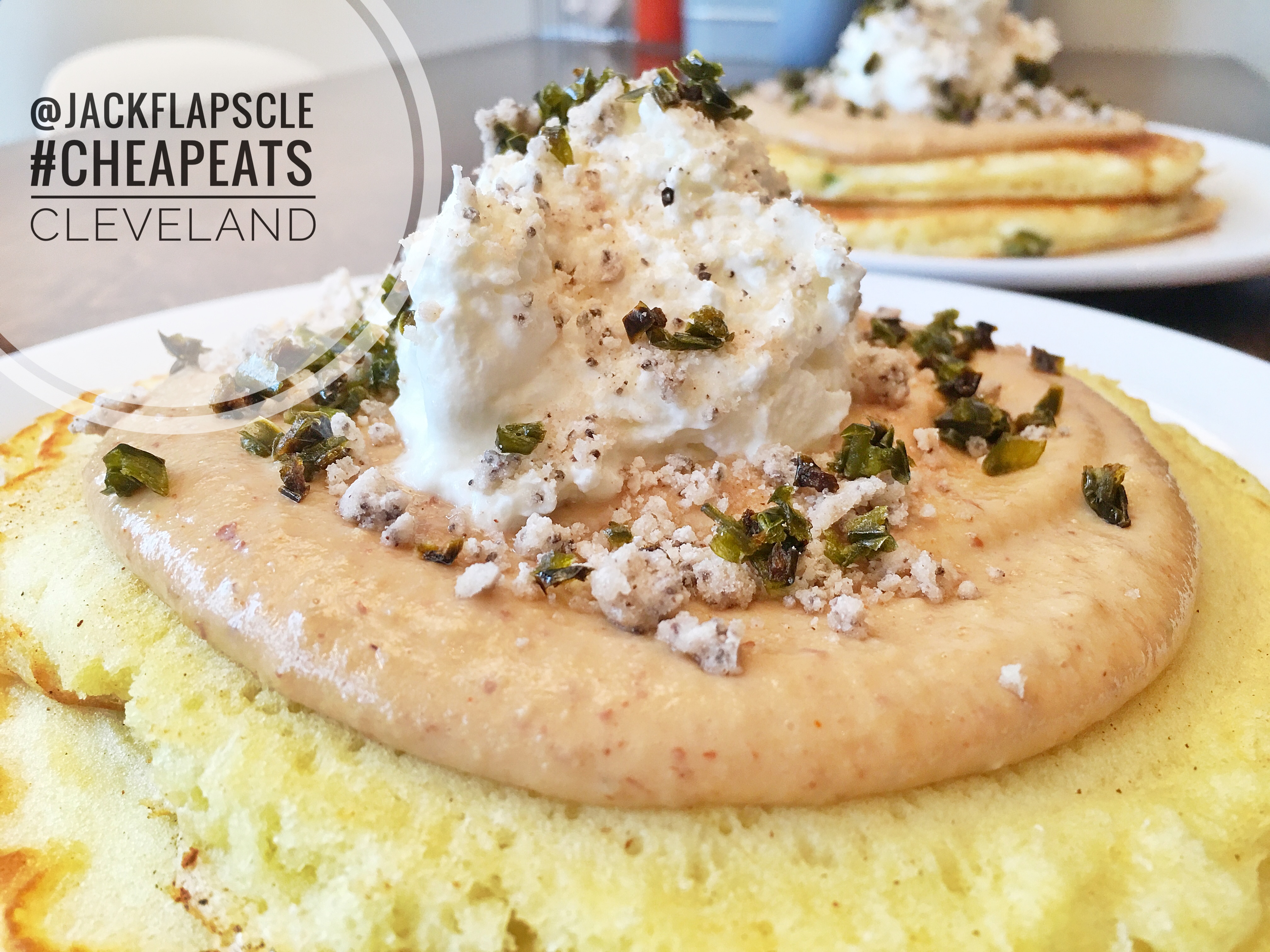 The Vitals:
the spot: Jack Flaps 3900 Lorraine ave Cleveland OH 44113
the eats: Candied Jalapeño White Chocolate Mole Flapjacks
the bucks: $9.50
the full nelson: if the name of these pancakes doesn’t draw you in . . .

Chocolate Mole pancakes would be a find in Houston, Los Angeles or Chicago, let alone Cleveland. Their existence however has more to do with the local chef scene than the Mexican food scene. Chef and owner Randy Carter has been working in kitchens for almost two decades, including some time at Momocho: Cleveland’s go to Modern Mexican restaurant. So between his time there and his love for pancakes(he entered these flapjacks in a local contest), Candied Jalapeño White Chocolate Mole Flapjacks were born. For a dish that looks like they were created for Instagram(#pancakeporn), these pancakes also manage to deliver complex flavors that also find balance. The subtle spice from the candied jalapeño pairs nicely with the sweet earthiness of the white chocolate mole, and are indeed as tasty to eat as they are as interesting to read aloud. But to be honest, I’d pay the $9.50 just to post these pancakes on my Instagram. And like that, Cheap Eats Cleveland is off to a running start. 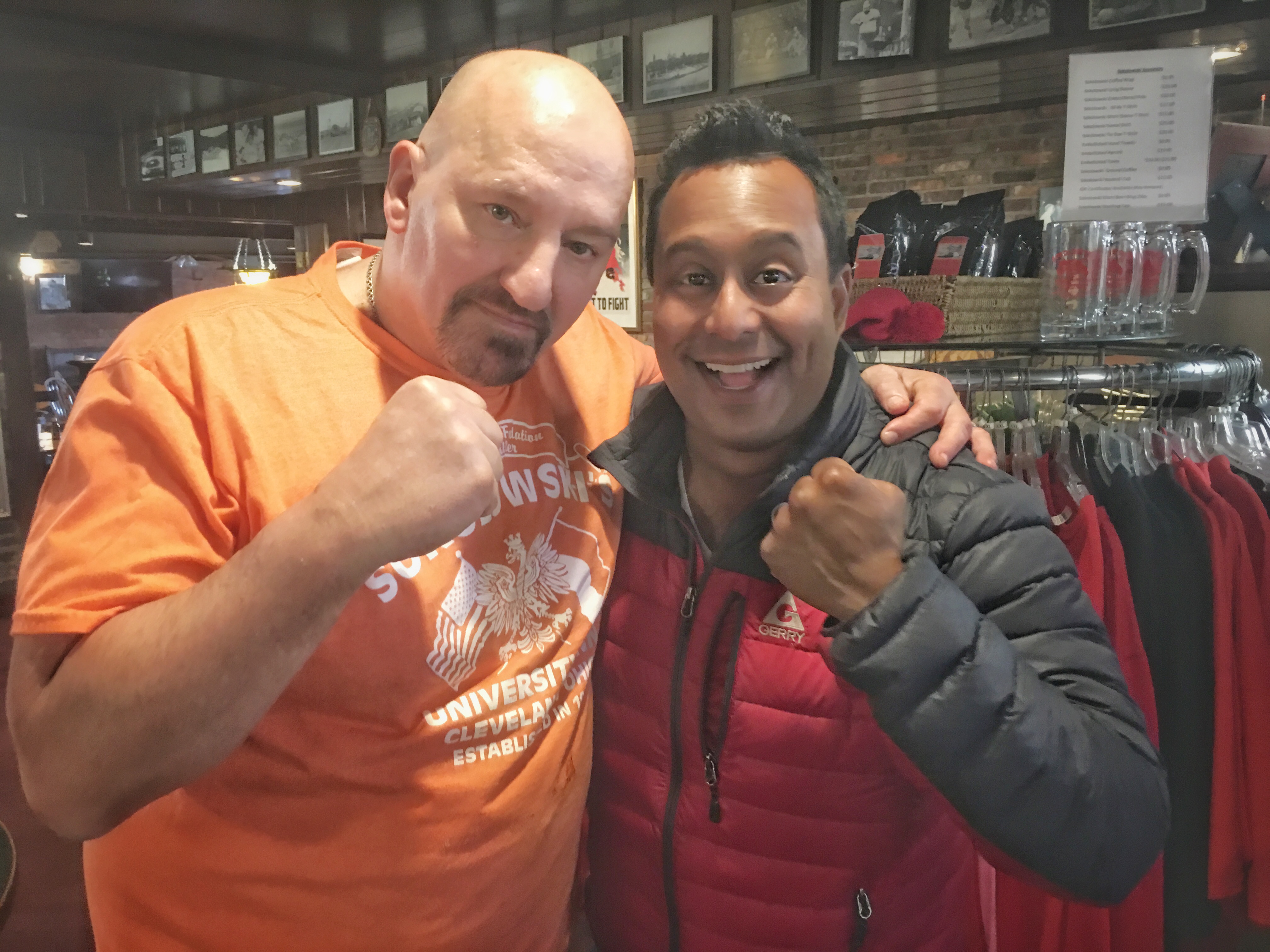 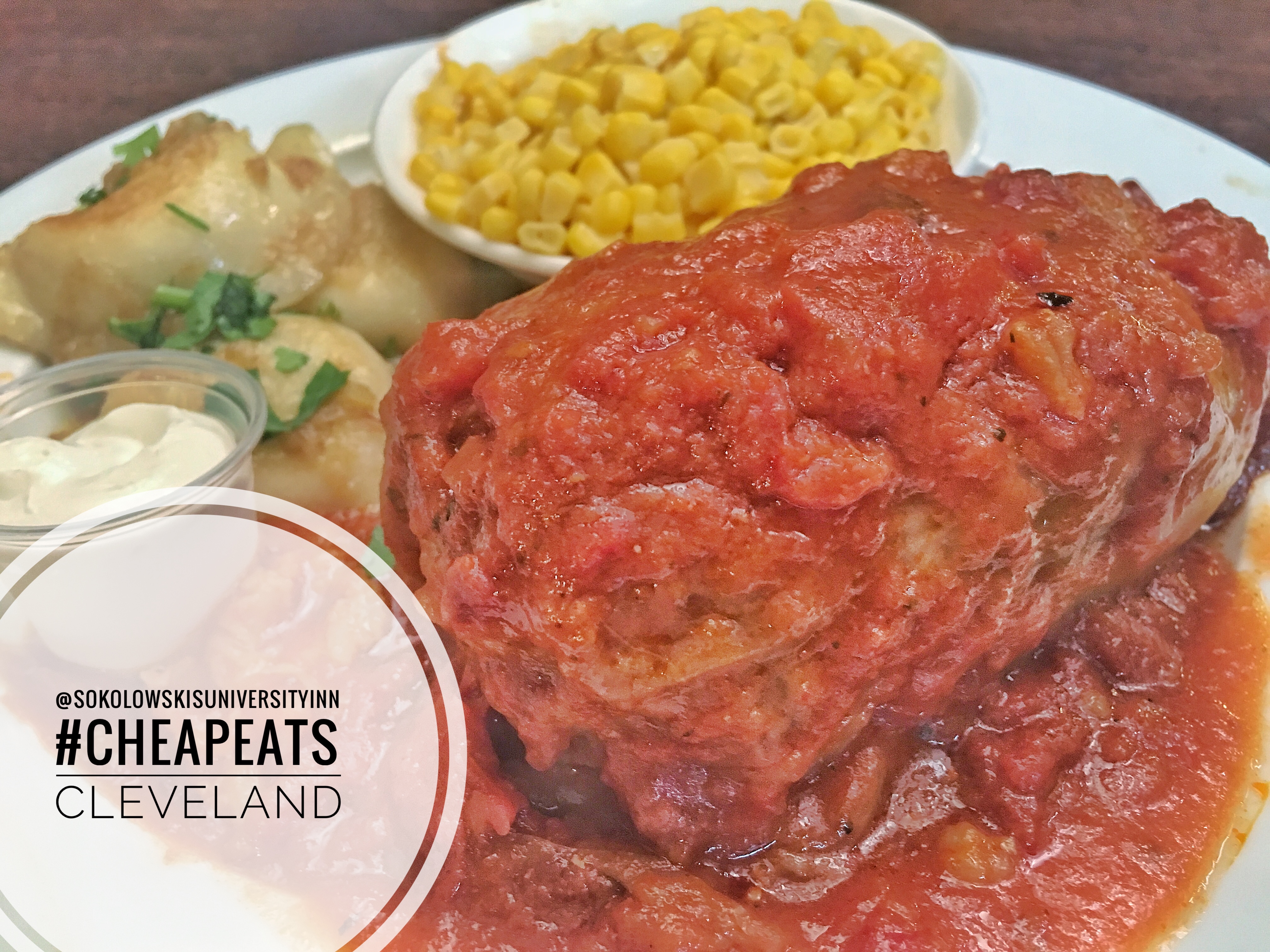 It’s a crowded field, but Stuffed Cabbage just might be the most classic Cleveland Comfort food. Ground meat, in this case three(beef, veal and pork) plus a red sauce makes for a guaranteed good time. The cabbage part might throw you if you don’t have any Eastern European family or friends but rest assured, this is good stuff. The roll is huge and filling but make sure you include the pierogi as a side. For the uninitiated, a pierogi is dumpling filled with cheese or potato, like gnocchi on steroids. Needless to say this is a stick your ribs kinda lunch, and really, enough grub for a dinner. At any time of day, $10.25 is a fair price for food that has that unmistakeable homemade feel. The food is only half of it too. The Sokolowskis, who have been running this Cleveland Cheap Eats institution for 95 years, are half the draw. Bernie and his sister were some of my most favorite people I have met on Cheap Eats. Between those pancakes and this stuffed cabbage, I could have called it a day. But this is Cheap Eats Cleveland my friends, and the day has just begun. 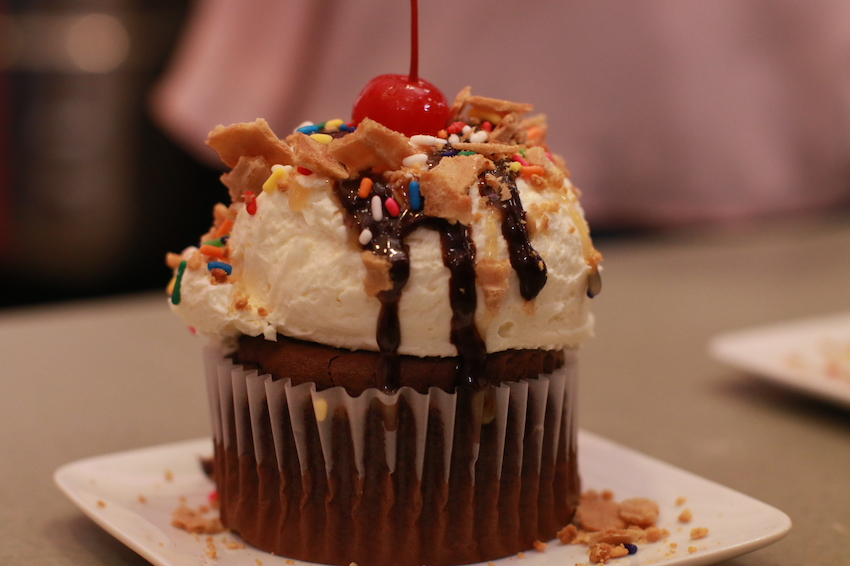 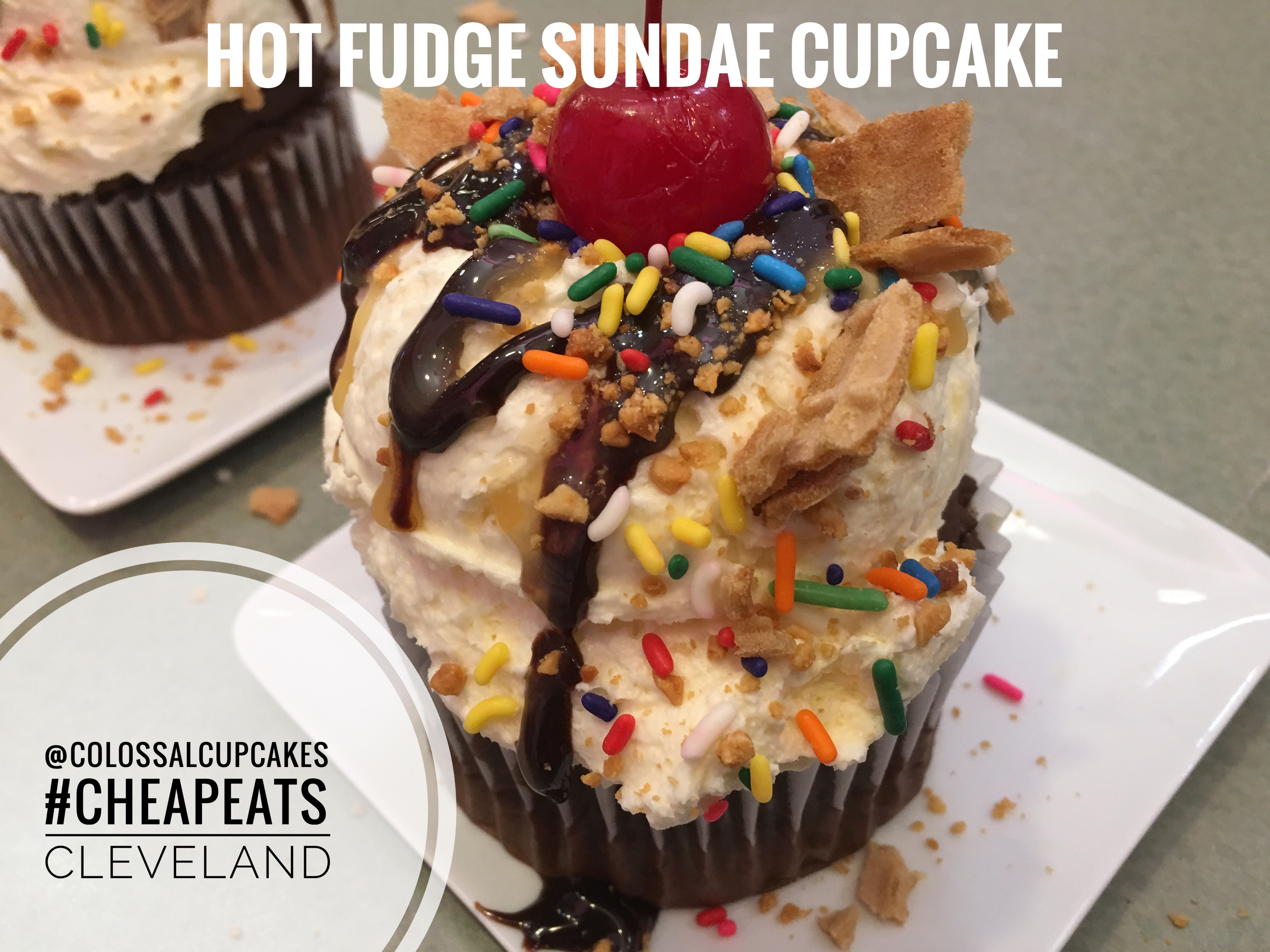 If someone were to tell you that they can turn a cupcake into a hot fudge sundae by replacing the vanilla ice cream with frosting, you should be afraid, very afraid. But if there is one thing I have learned eating all these amazing cupcakes on Cheap Eats is that buttercream ain’t frosting . . . buttercream is just beyond. Kelly Kandah, the woman behind Colossal Cupcakes knows this well. After taking a page from the cupcake craze in NYC, Kelly opened Colossal Cupcakes in 2012 and one of her staple moves is using real butter in her buttercream frosting. Unlike the cheap spots that use margarine, Colossal Cupcakes prides itself on using real butter and they go through a lot. Believe me Cheap Eaters, real butter is the way to go, especially when you have to risk lockjaw to take a bite out of this cupcake. At $3.75, I’d say a case of lockjaw is worth it. 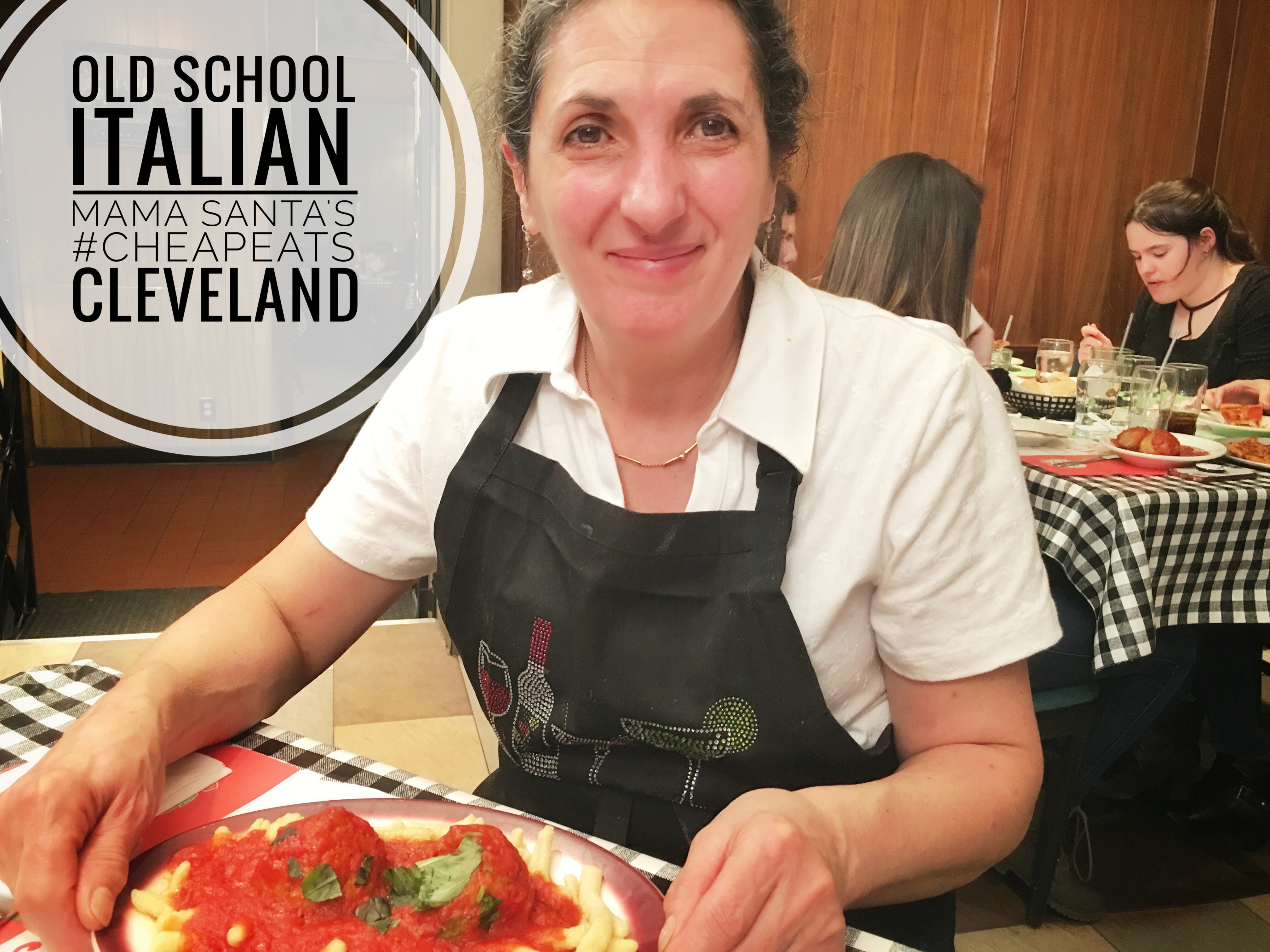 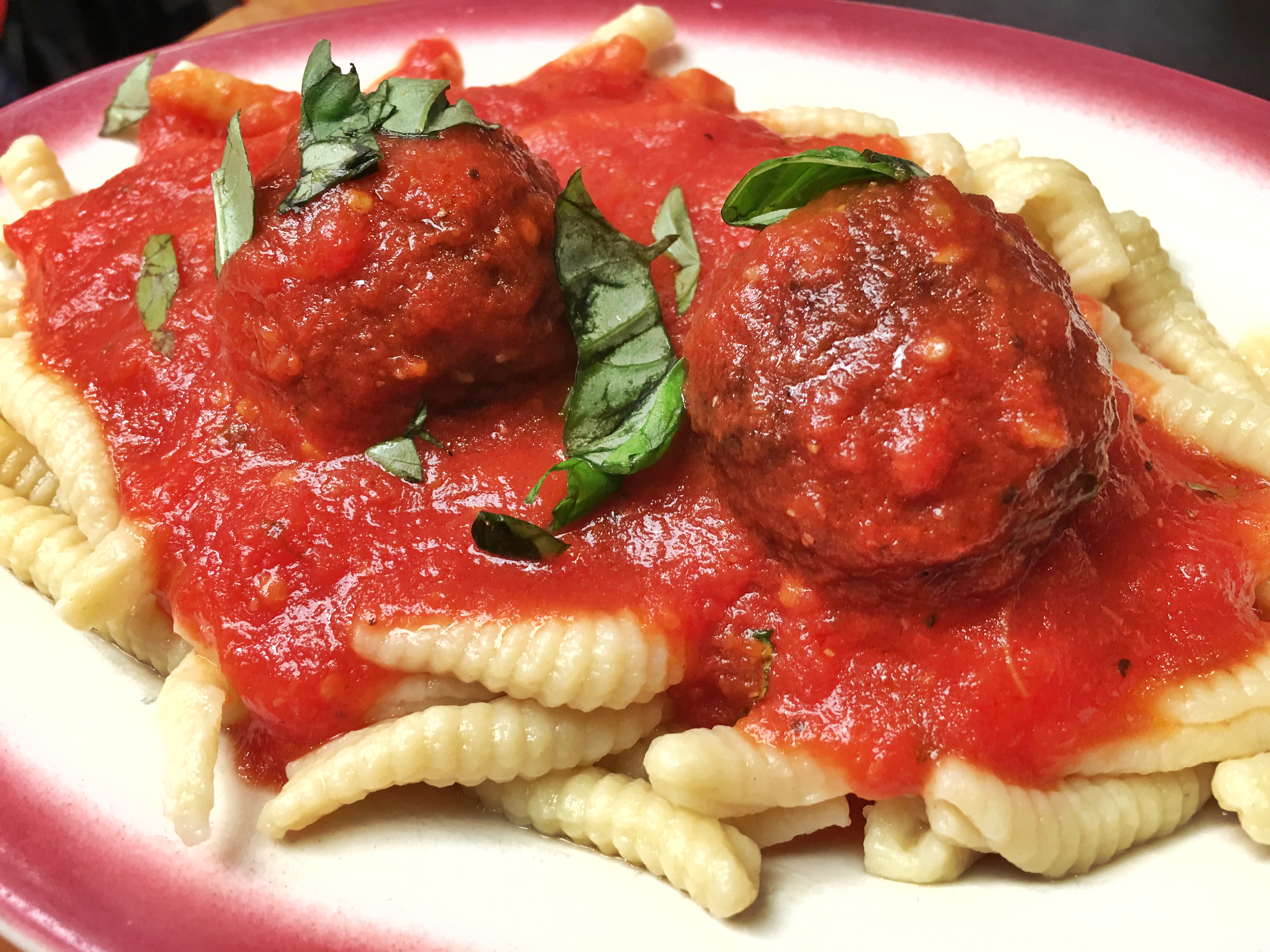 The Vitals:
the spot: Mamma Santa’s 12301 Mayfield road Cleveland OH 44106
the eats: Cavatelli with Meatballs
the bucks: $9.95
the full nelson: Old School Italian at its finest. The only thing missing is Goodfellas playing on the TV.

I grew up in St. Louis and absolutely cherished the Italian restaurant scene there. We had our Italian neighborhood, dubbed “The Hill” as well as plenty of off shoots from white table cloth fine dining to a local pizzeria chain. Mamma Santa’s reminds me of those old school Italian St. Louis joints, and honestly, is probably better and cheaper. Let just get down to brass tacks: $10 get you a plate of house made pasta, with house made meatballs, in house made sauce. And the house is run by a real deal Italian mother. Does it get better? Not really, no. The decor is spot on too with that faded dark wood paneling you would see in the basements of Midwestern homes. And the customers? They are as loyal as it gets. Pasta and meatballs has long been a common site to see on menus ranging from bad chain restaurants to the kiddie section at the Golf Club. But ask yourself this: when was the last time you had a plate of pasta and meatballs that was truly amazing? Sure, I can go on about how a dish like this, one so simple and taken for granted, just isn’t done right anymore. But Mamma Santa’s is more than just one dish. This is a Cleveland Institution that has been doing it right all along. A true gem. A Cheap Eats Cleveland treasure. 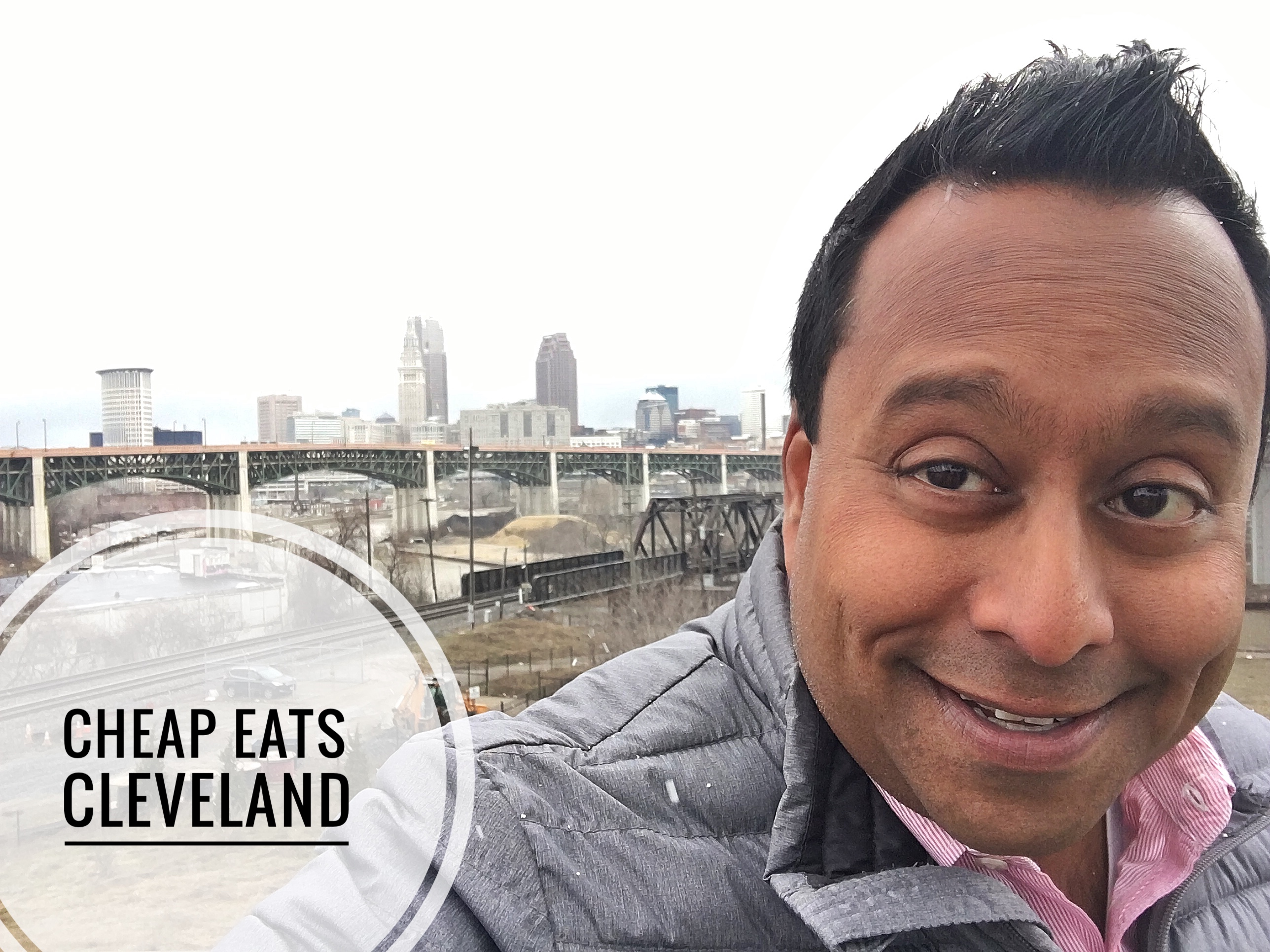 If you look carefully above in that pic you might notice a little snow. Well it was actually hail/snow/ freezing rain. We shot Cheap Eats Cleveland in the end of April. In fact it was so late into the spring that I even caught a Cleveland Indians game, and we still got a taste of that brutal lake effect winter weather. Being a warm weather guy for the last 23 years, I kept asking my Über/Lyft drivers about the weather. They would reply “that’s Cleveland”. They didn’t care. They simply endure. I mean, what do you expect from Browns fans right? Well, that blue collar, Midwest sensibility is exactly why I love the Land. The food is just the cherry on the sundae I suppose.

Until next time Cheap Eaters . . . Stay Thrifty. And warm!