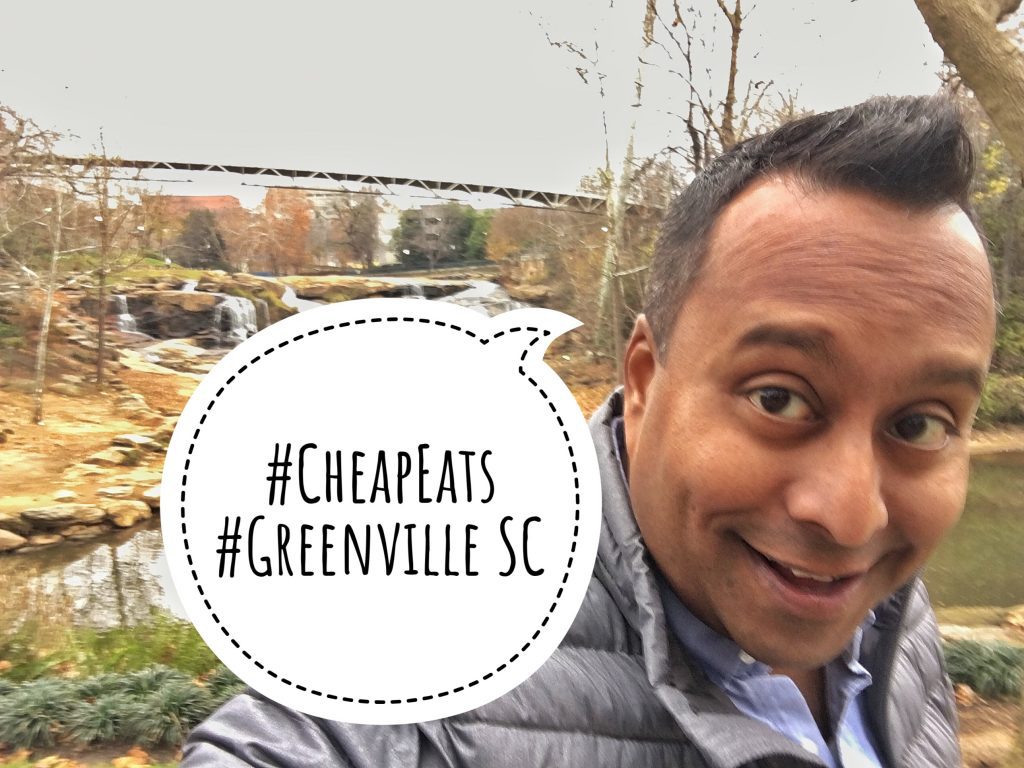 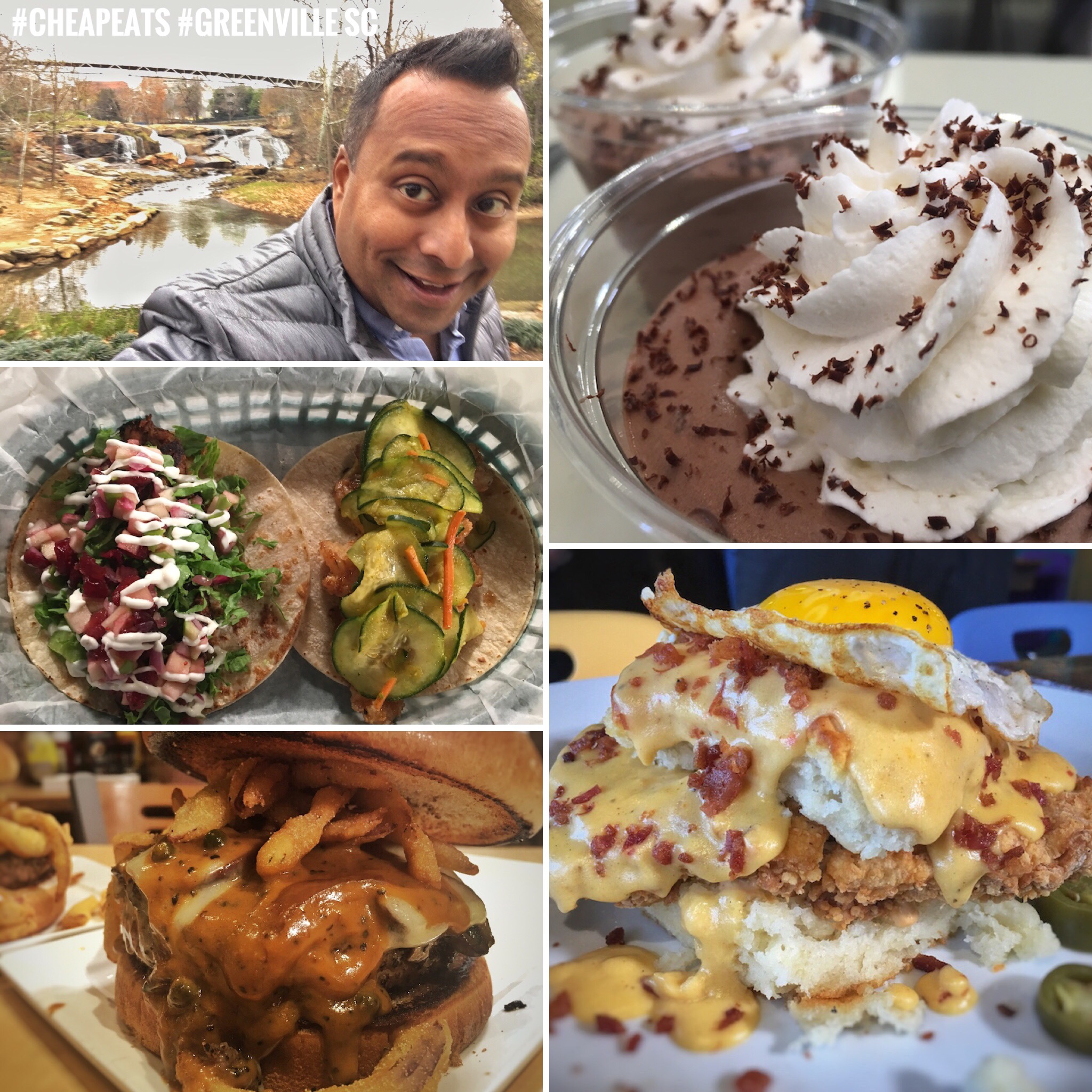 Greenville SC may not be on your foodie radar YET but trust me, if you spend time in Asheville or Atlanta, you will no doubt hear about this South Eastern up and comer. If the cranes and bulldozers don’t clue you in, I will flat out say it: construction means progress. I can’t say what Greenville was like before I got there because it was my first time here when we shot Cheap Eats but I do know that folks are excited about restaurants opening up and bringing in new peeps. But you aren’t here for a real estate report – you want them Cheap Eats! Well it is my solemn duty to share these eats. And share I shall. 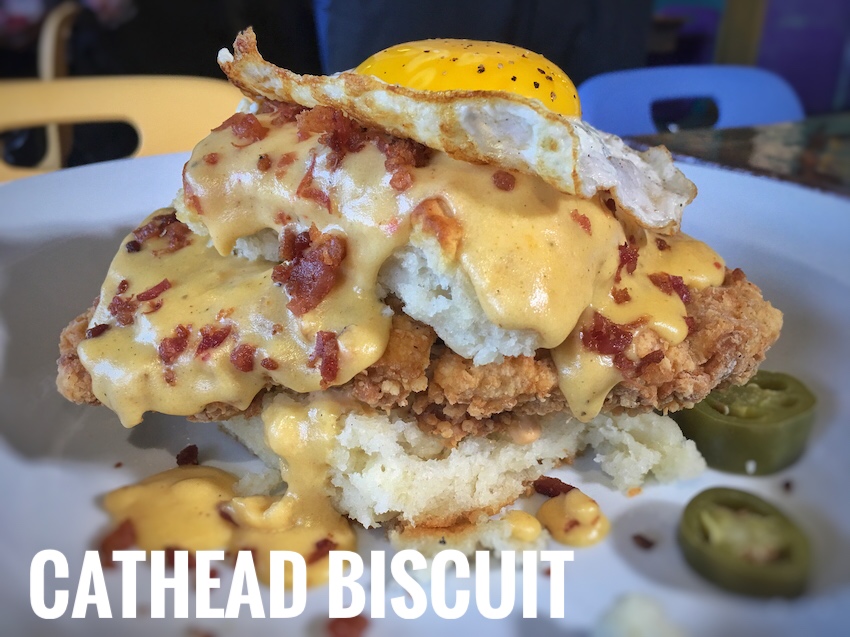 I did not grow up on biscuits and gravy. And I have had my fair share of mediocre ones too. A common theme amongst forgettable, take five bites and move on, biscuits and gravy is that it is just overwhelmingly filling. I suppose if I was a character in a Jack London novel, trying to warm myself in the Arctic tundra, needing every bit of energy to keep myself warm, I would lap up lard and not think about spicing up my rendered fat with say something like pickled jalapeños. But I am not freezing in the arctic am I? In fact I’m rocking shorts and thinking about my BBQ taco night on the grill for tomorrow. So when I see a biscuit with gravy that also rocks pickled jalapeños, I am very intrigued. Add a country fried pork steak, jalapeño cream cheese, and a sunny side egg for $9 and I’m saying “hey here is my $9”. Did I mention the gravy is a bacon gravy? Even my hypothetical Jack London novel version of myself is now pleased. Now about those pickled jalapeños . . . 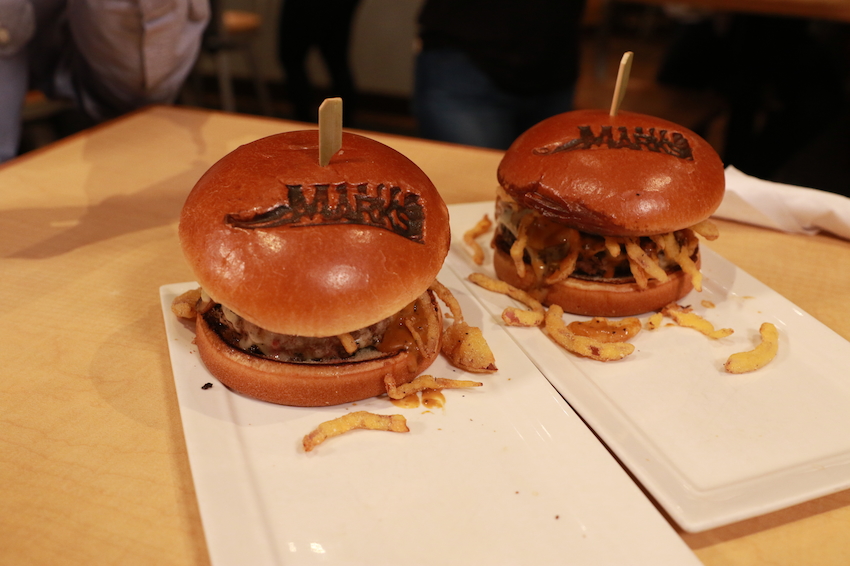 The Vitals:
the spot: Grill Mark’s 209 S. Main St Greenville SC 29601
the eats: Café Au Poive Burger
the bucks: $9.99
the full nelson: the burger every French Bistro should have on the menu

The burger experience can be broken down into two camps: the beef experience and the sandwich experience. The latter leaves less room for interpretation. I believe this is because the ultimate sandwich experience of a burger has been defined so well by the drive thru style double cheeseburger. Im talking two thin to somewhat thin, often smashed, well griddled patties, plenty of gooey cheese, some sauce and a crunch brought on by like likes of onions, pickles and some kind of lettuce. Think Big Macs, In-N-Out’s double double animal style, Shake Shack, Smashburger, Bobs Big Boy, I could go on and on. Then there is the beef experience. In this experience one might encounter cheese, perhaps even a strong flavored cheese like Stilton. Or a pointed green like arugula, or garlic aioli, caramelized onion. I could go on and on, but one thing will always be the focus: a thick beef patty, cooked like steak. I like both but I often long for the beef experience more. Add to this my love for Steak au Poivre: steak coated in peppercorns and finished with a pan sauce. Now we have a burger that I’m surely gonna drop $9.99 for. Now I never thought of having a steak au poivre sandwich but then again I never thought about how well Cremini mushrooms would go with an Au Poivre sauce. Or brie cheese for that matter. Some may balk at a burger that’s $10, even in this glorious burger renaissance, but think of this as a Steak Au Poivre for $10, that also happens to be some Bang for your Burger Buck. 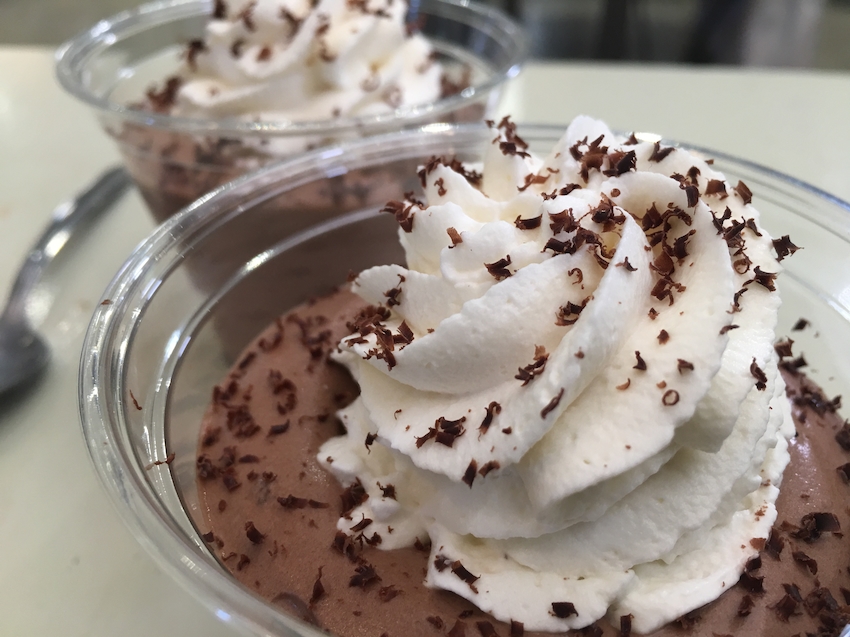 The Vitals:
the spot: The Chocolate Moose Bakery and Cafe 130 S. Main St Greenville SC 29601
the eats: Chocolate Mousse Pie
the bucks: $2.95
the full nelson: A mousse that’s not moosing around

As one might suspect, the Chocolate Moose Bakery and Cafe has a little fun with the homophonic nature of the words “moose” and “mousse”. The chuckles might end there but if you caught my little quip in the episode, “Im not here to moose around” then you know Im not here to mess around. What one should not  nor mess around with is the chocolate mousse pie, which is clearly a chocolate lovers dream. The single serving might not conjure up an image of a 9″ pie cooling on a window sill, but the oreo cookie crust certainly does remind you why a good crust makes for a great pie. Here the oreo adds substance to the light and creamy dessert without distracting from the flavors. Chocolate Mousse is one of those desserts thats become of a bit of an endangered species, not as ubiquitous as a Pot de crème at a French Bistro or a $5 cupcake at a cupcake only bakery. So grab one whenever you can. And at $2.95 a serving, you should be able to grab one anytime you want. 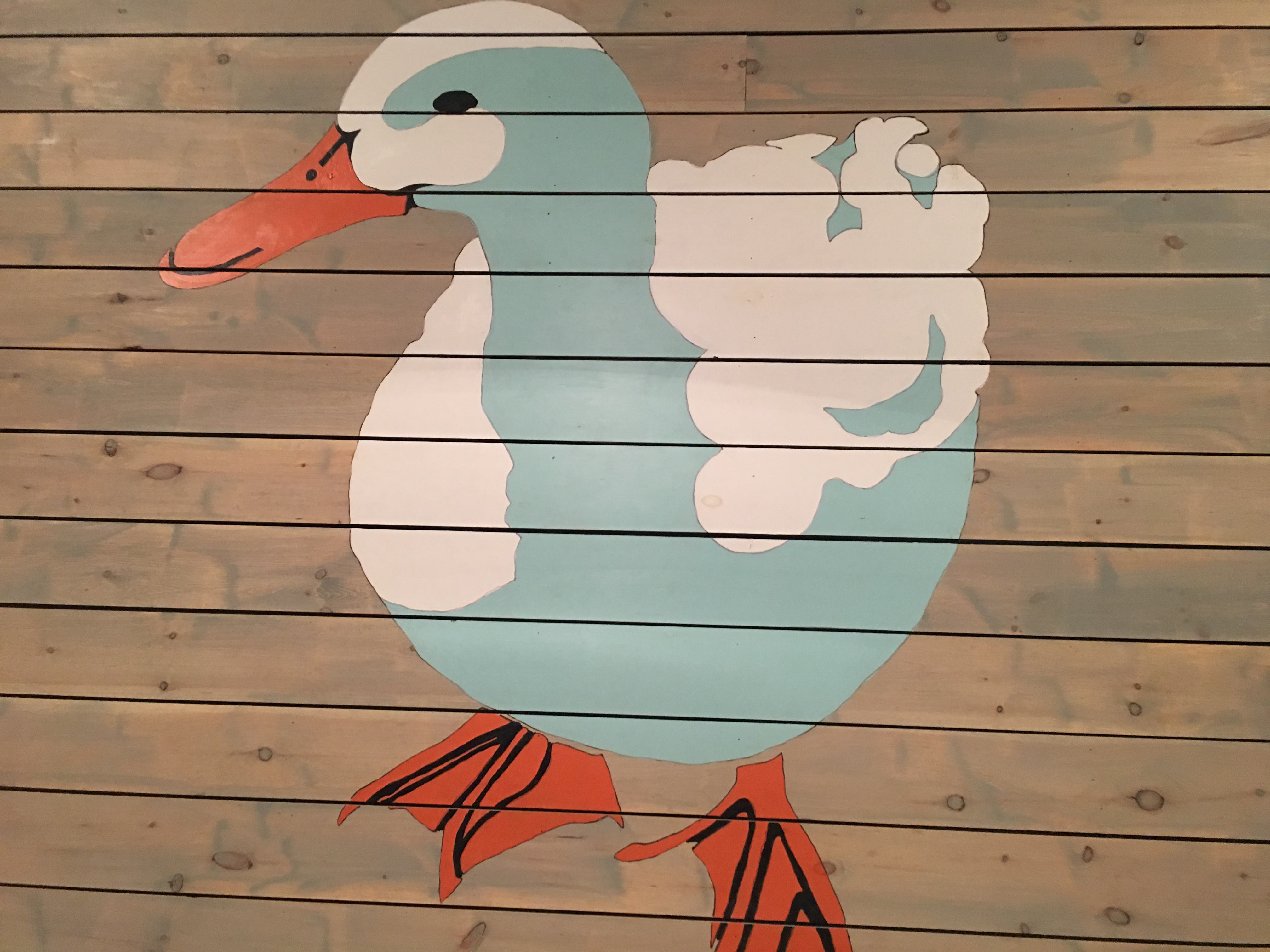 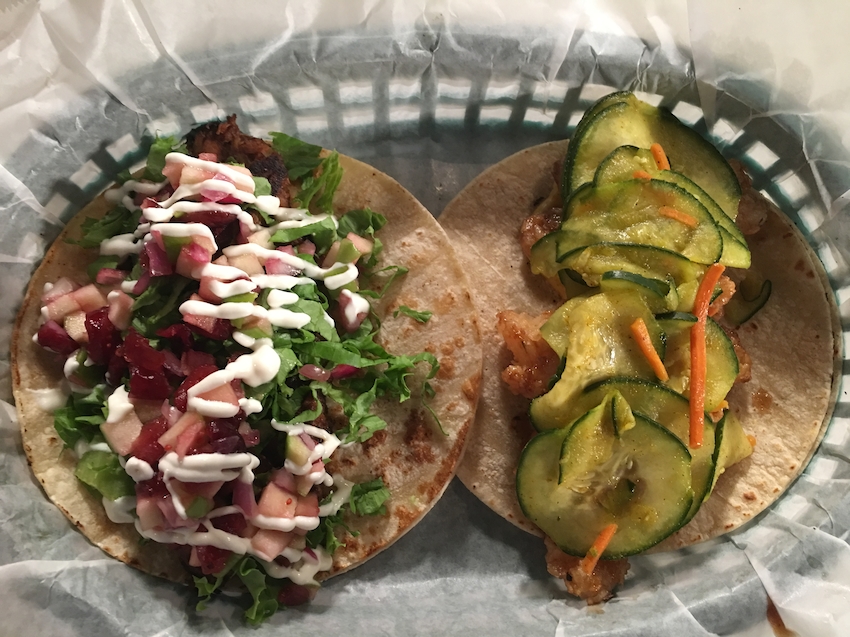 The Vitals:
the spot: White Duck Taco Shop 1320 Hampton Ave Greenville SC 29601
the eats: Bangkok Shrimp taco and the Duck Mole taco
the bucks: $3.65, $5.35 respectively
the full nelson: And you though innovative tacos were a West Coast thing

In what seems like a blink of an eye to yours truly: tacos, food trucks and everything that is possible upon a tortilla canvass have become as common place as a Coca-Cola sign. I remember stepping up to a roach coach in 2006 in the yet to be super gentrified Silver Lake neighborhood of LA, saying to myself “Yup, this is the one peeps have been talking about. You can do this. Just order. Its not that sketchy here“. And to think I was almost 30 and being weak sauce about grubbing tacos off the street. Cut to 2018 and I’m relatively fearless. The other day I had kitfo(Ethiopian steak tartar) that I ordered to go. So coming to Greenville to grub on Duck Mole and Asian inspired shrimp tacos should be no biggie right? Well no hesitation on my part doesn’t mean the peeps at White Duck are stepping softly on their taco game. A 38 ingredient mole would suggest otherwise. Or even the smarts about pairing duck with a sauce like molé. 38 ingredients may seem like a lot but molé is never a simple affair. Beyond the hours on the stovetop to produce a rich and complex sauce is the mind boggling iterations that come from the five base ingredients: chile peppers, spices, cocoa, fruit and nuts. I love a good medium rare duck but unlike a steak, duck needs strong flavoring to tame the gaminess. A good molé could have tamed the sons of Saddam Hussein. In contrast, the Bangkok shrimp taco seems somewhat more pedestrian, but like all great tacos, take note of the condiments. Yes, fried shrimp in a sesame glaze is familiar territory if you spent sometime in a Chinatown of any big city but cucumbers marinated in a curry sauce? That’s a game changer, familiar only if you happened to visit a Chinatown in India where the mingling of turmeric and Szechuan peppers is a common occurrence. Did I mention all of this is happening in Greenville SC? I told you tacos have become as common place as a Coca-Cola sign. 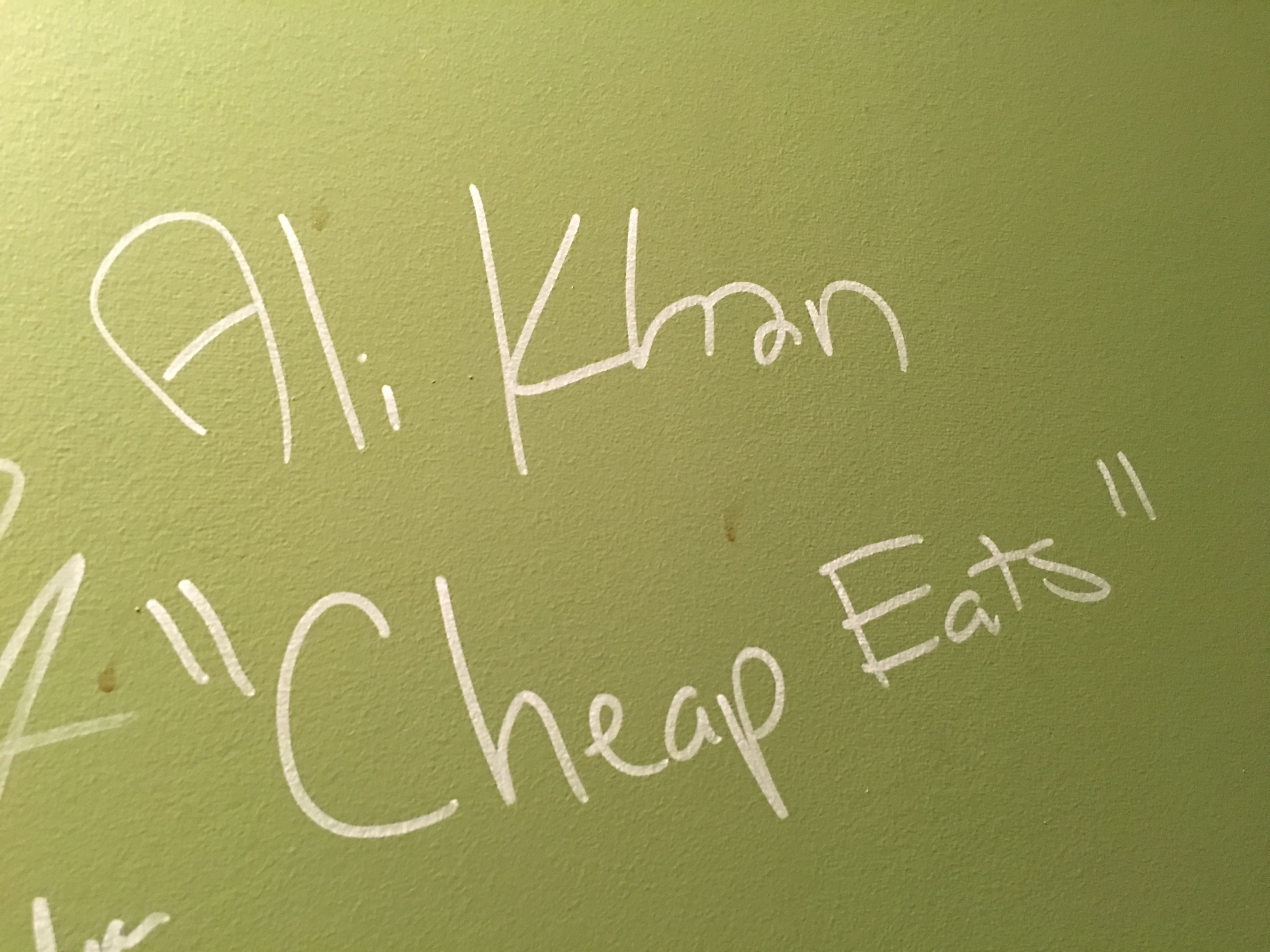 Yes my friends, I can give Greenville SC the Cheap Eats seal of approval. A southern town that can get as exotic as Duck Molé tacos if you want it to but doesn’t forget about its rich history in biscuits and gravy. And the fine dining, farm to table scene? Oh they have that too. So stay tuned for more posts on the Greenville food scene and until next time my friends . . . Stay Thrifty.