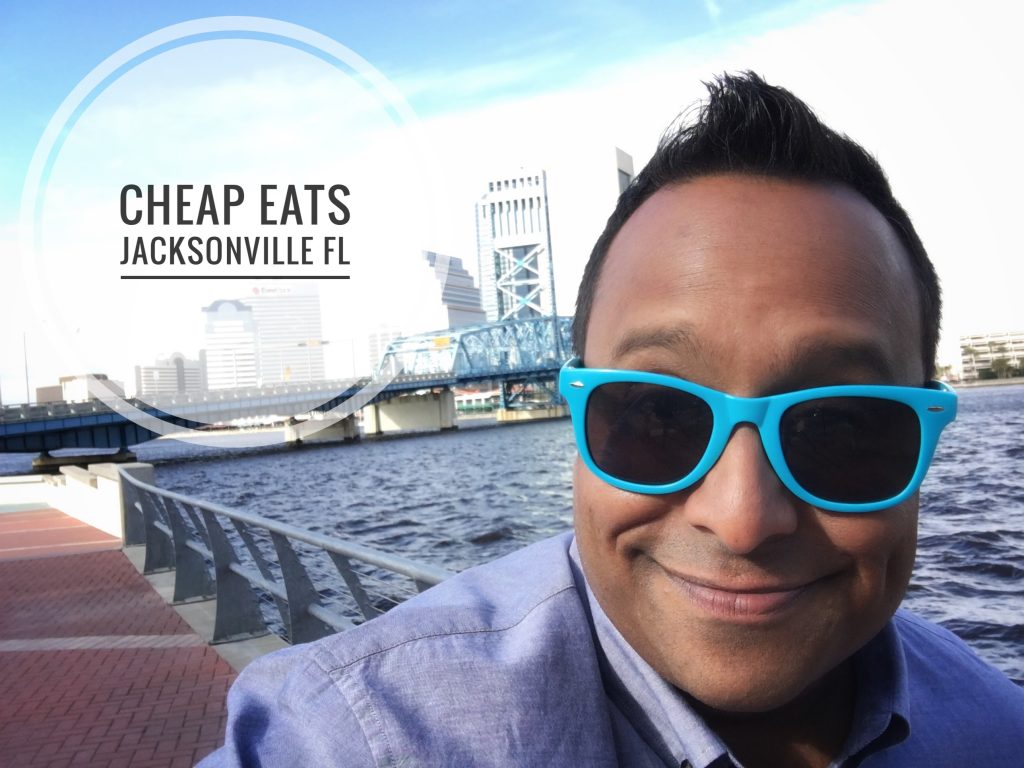 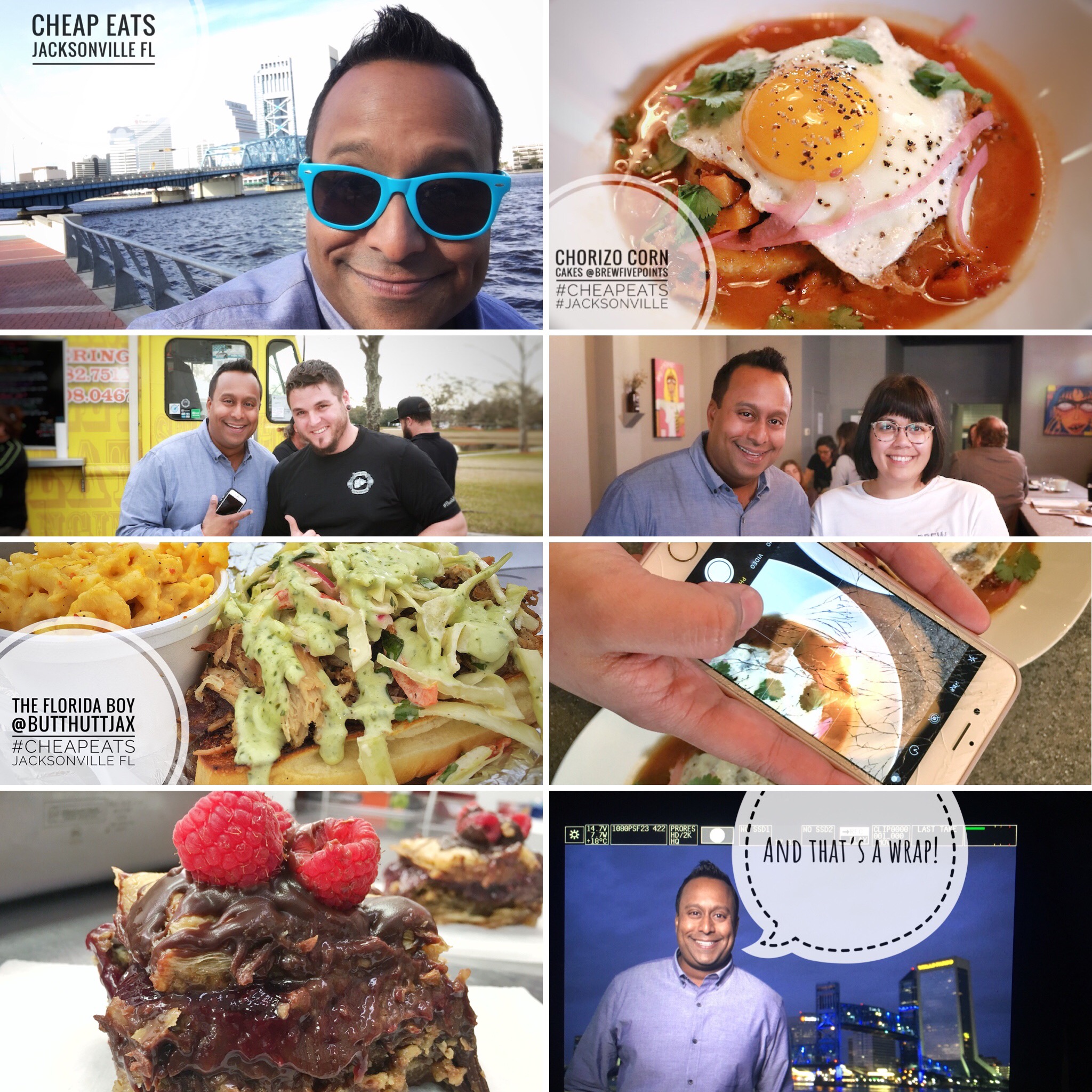 Cheap Eats Jacksonville was the second hit of the “one-two Florida culinary punch” that started with the left lead in St. Peterburg and followed up with the right cross in Jacksonville Florida. Straight up, I had no expectations about eating around these parts and man did I get a mouthful of solid Cheap Eats and as well as some killer Thai and some upscale dining as well. Regarding the latter – stay tuned for a future post on that, #bacon #hollandaise, but for now: strap in and get ready for another taste of Cheap Eats Jacksonville! 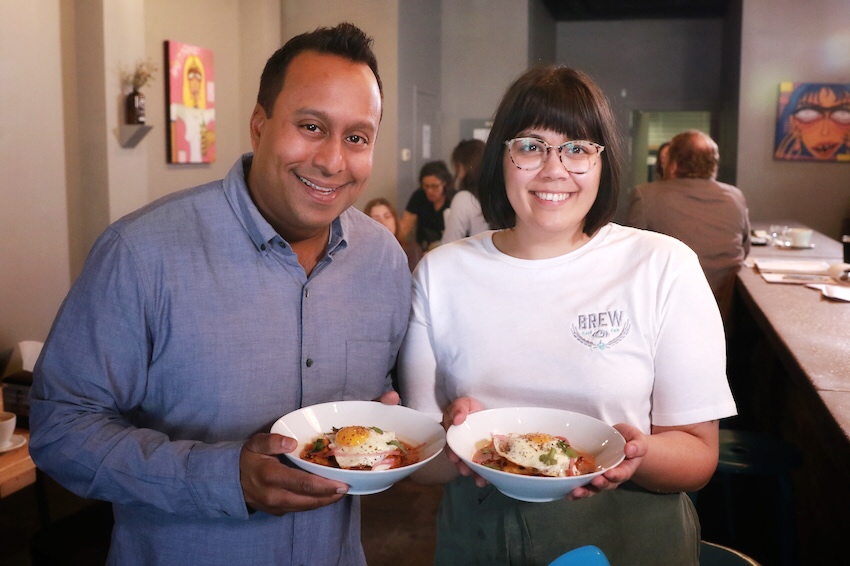 Ali posing with Calli from BREW and the Chorizo corn cakes dish. 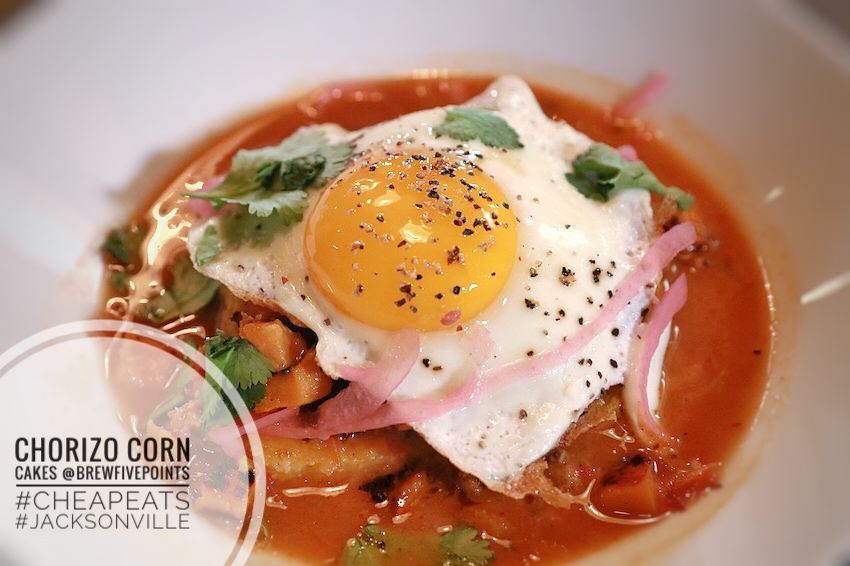 Chef Calli Marie is my kind of Millennial. She is a passionate foodie who turned her passion into her profession; something I certainly can relate to. She takes loads of pics of her food; also something I can relate too. And she rocks some serious fashionista looks; something I have no clue about but hey, I am over 40. Calli grew up in Texas which influences the menu at Brew Five Points. The intersection of American Southern and Mexican food describes classic Tex Mex but the menu here isn’t stuck with traditional sizzling plates of fajitas and queso. In fact the queso that comes with the Chorizo Corn Cakes happens to be vegan that is served on a dish that features pork. Throw in some fried corn cakes, roasted sweet potatoes, pickled red onions, chile guajillo sauce and a sunny side up egg, and for $9, this was not only a great start to Cheap Eats Jacksonville, but the way many local chefs start their day. If only I got more fashion advice. 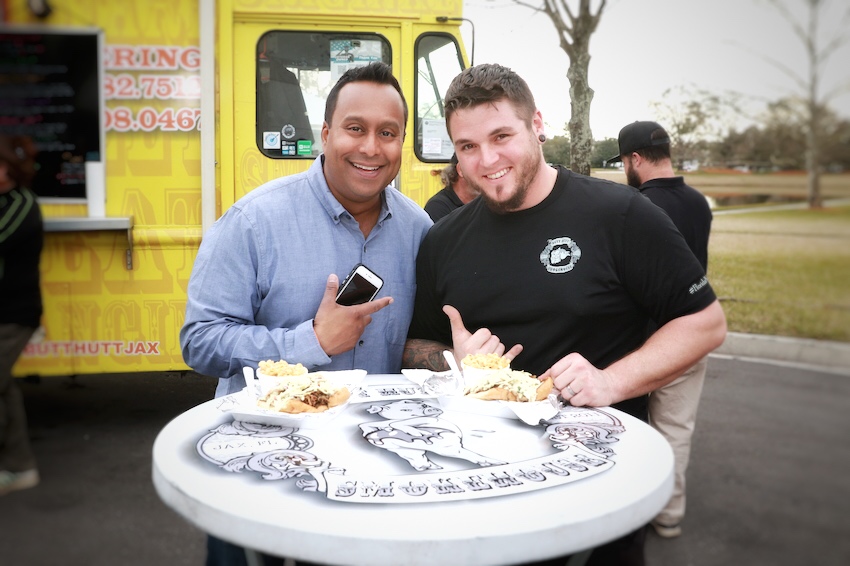 Ali posing with Chef Jacob Bander and the Florida Boy sandwich at the Butt Hutt. 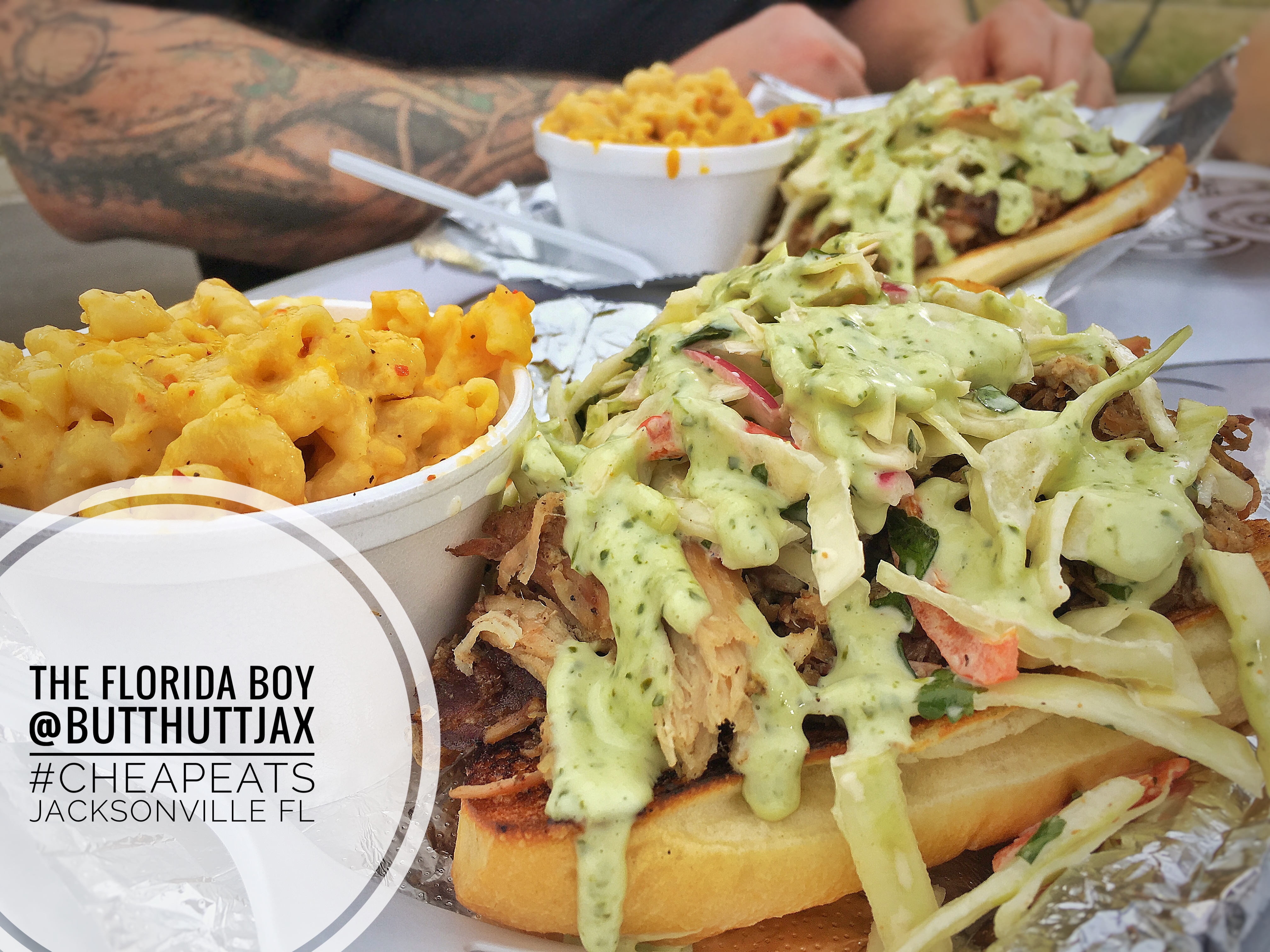 The Vitals:
the spot: Butt Hutt Smokehouse a roaming food truck in Jacksonville FL so check facebook, twitter or instagram
the eats: The Florida Boy
the bucks: $9
the full nelson: Florida might a full on barbecue movement here with these guys

If you have been watching the last two seasons of Cheap Eats, you know that I have spent a lot of time in the South and have had more than my fair share of pulled pork, including a visit to North Carolina, where it is indeed THE speciality of the region. And with that in mind, know that Cheap Eats Jacksonville found a pulled pork that is worthy of national competition. Not because they are emulating the Carolinas but because they are forging their own path of barbecue.

And who are they? Meet Jacob Bander, a Florida boy himself and someone who grew up watching Julia Child and cooking with his grandmother. Jacob is a self taught pit master who also attended culinary school. And he applies some of that culinary school know how to his process of smoking the pork shoulder in advance and then keeping the meat ready to serve in vacuum sealed bags in a sous vide machine, to ensure perfectly juicy pulled pork with significantly less wait times. But what really stands out here is the rub and sauce. Both of which feature flavors of the Latin culinary world to the tune of cumin and cilantro, ultimately reflecting Florida’s sense of place in the US.

But really it’s all about the sense of full when it comes to this Cheap Eats Jacksonville lunch; you get 7 oz of pecan smoked pulled pork with a cilantro slaw and a garlic cream sauce plus a side . . . for $9. I may have walked in hungry in the Jax but I sure wasn’t staying that way. 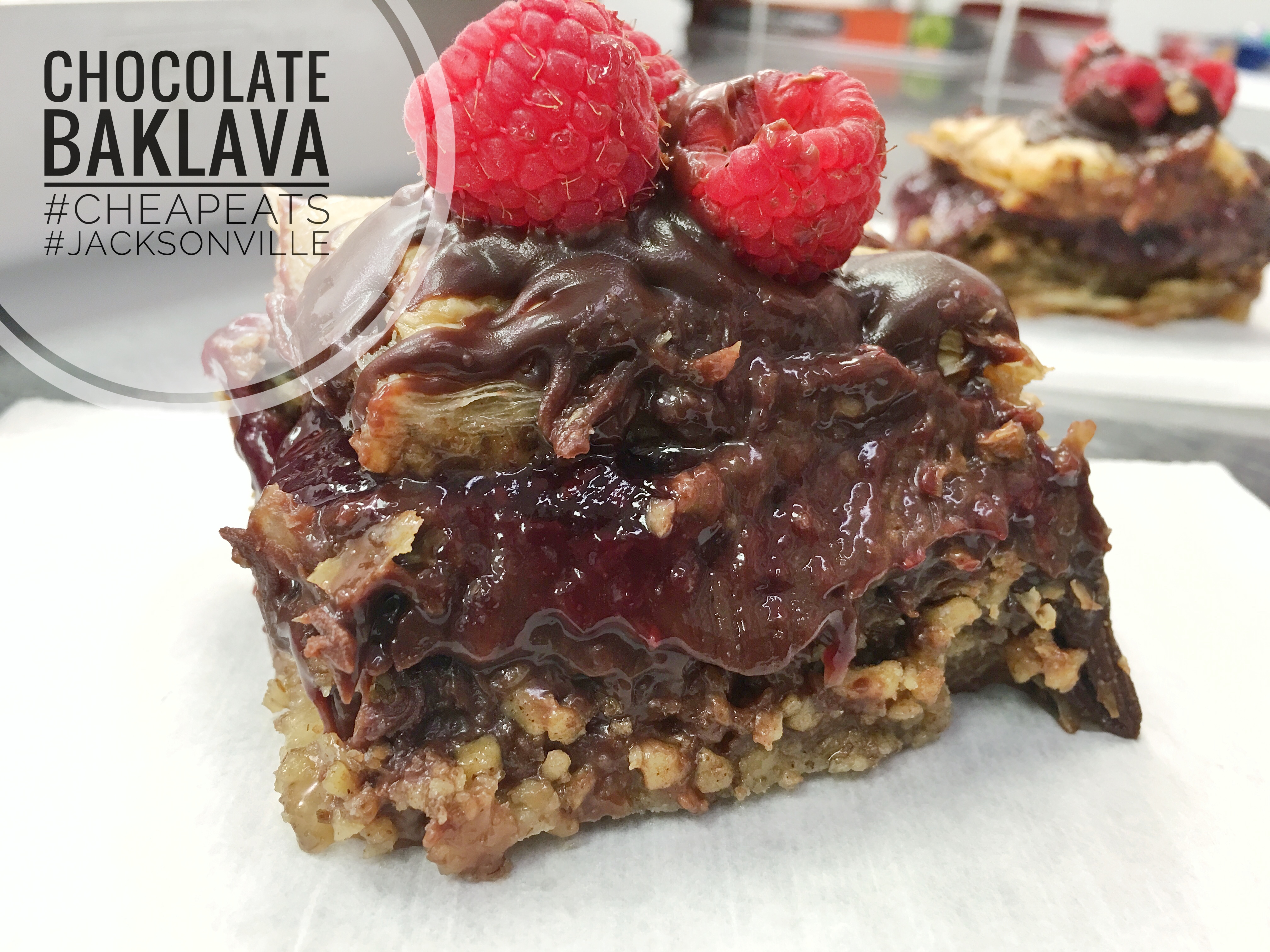 The Vitals:
the spot: Ya Ya Sweets a 5041 San Jose blvd Jacksonville FL 32207
the eats: Chocolate Baklava
the bucks: $6.50
the full nelson: Chocolate makes everything better

I grew up in St. Louis, eating plenty of gyros as well other assorted Greek eats, baklava being one of them. Not being the biggest walnut fan, I would just eat the luscious top: the layers of phyllo dough soaked in honey. Ya Ya Sweets, our snack spot for Cheap Eats Jacksonville, offered a sweet alternative – soak everything in chocolate. I don’t think I have ever eaten so many walnuts in my life. Mixing melted chocolate and heavy cream, the traditional honey walnut layers get a layer of this chocolate cream concoction(essentially a ganache)and then the whole baklava gets one more final pour. Throw in a raspberry and you won’t blink twice at the $6.50 price tag. And you wouldn’t care either because the Ya Ya making this Baklava, Jackie Biles, is the Greek Grandma everyone wishes they had growing up. 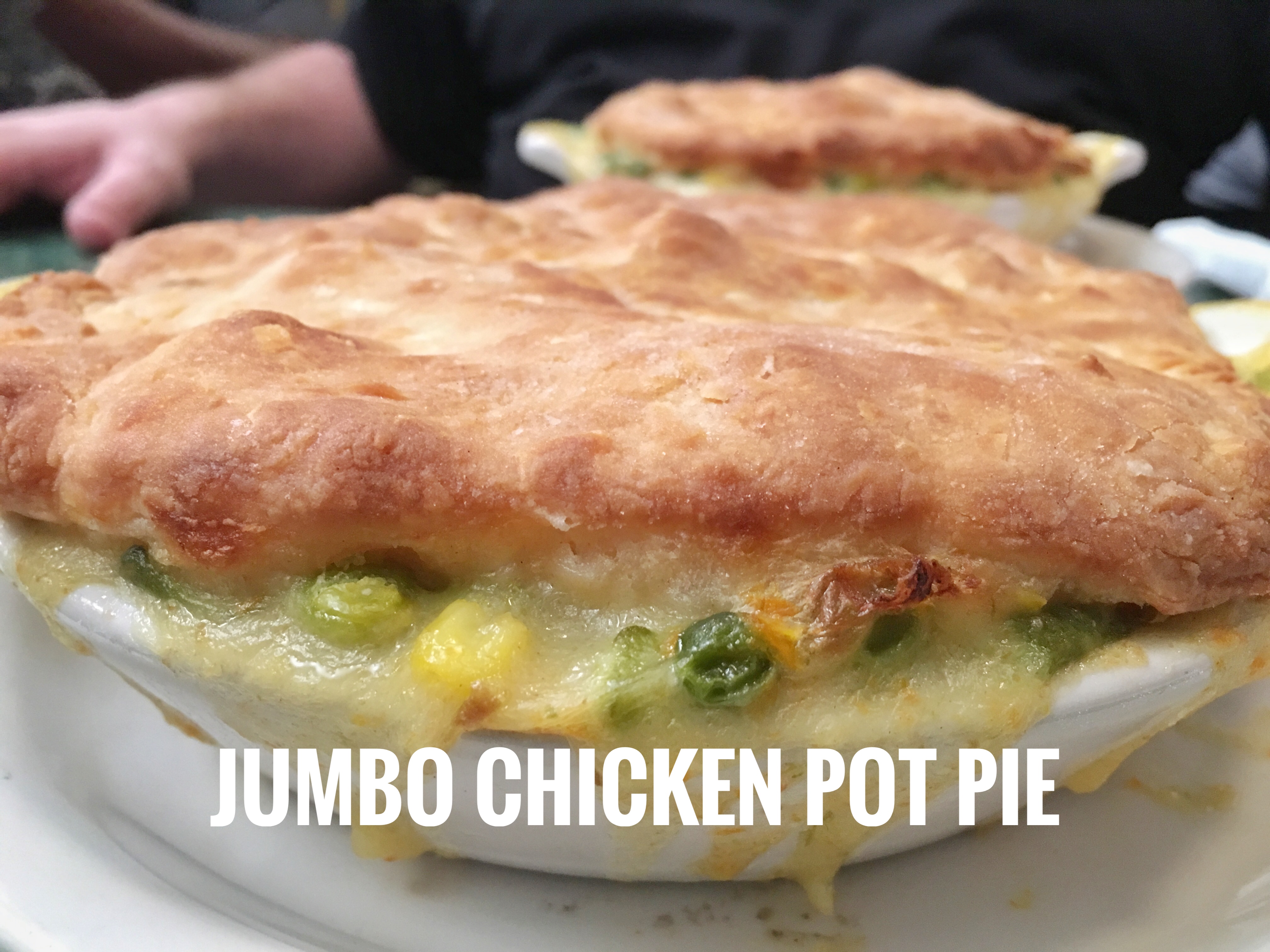 The Vitals:
the spot: Metro Diner 3302 Hendricks ave Jacksonville FL 32207
the eats: Jumbo Chicken Pot Pie
the bucks: $9.99
the full nelson: the biggest chicken pot pie I have ever had

If you have heard about Metro Diner before, well I’m totally not surprised, as this restaurant can be found in 13 states, boasting over 70 locations and it all started right here in Jacksonville. I have a soft spot for the classic American diner and Metro Diner is exactly that, opening its doors to folks in Jacksonville back in 1938. The diner experience a revival in 1992 and thanks in no small part to Chef Mark Davoli, who is a bit of a restaurant whisperer, brought tremendous growth and success to a true OG diner.

But I wasn’t gonna close out Cheap Eats Jacksonville with a Denver Omelette and call it a day. I had to pull out the big guns with the biggest Chicken Pot Pie I have ever come across. Replacing the traditional pie crust with a biscuit dough top, you get more filling, hence more bang for your chicken pot pie buck. Mark uses chicken tenderloins which I find are the best move when wanting the taste of chicken breast but also wanting to avoid a stringy texture that can come from overcooking the delicate muscle. Throw in the traditional peas, carrots and a rich gravy and you are gonna be very full and very happy. Comfort food at its finest: cheap, hearty and as classic Americana as smelling a charcoal grill light up on the 4th of July. 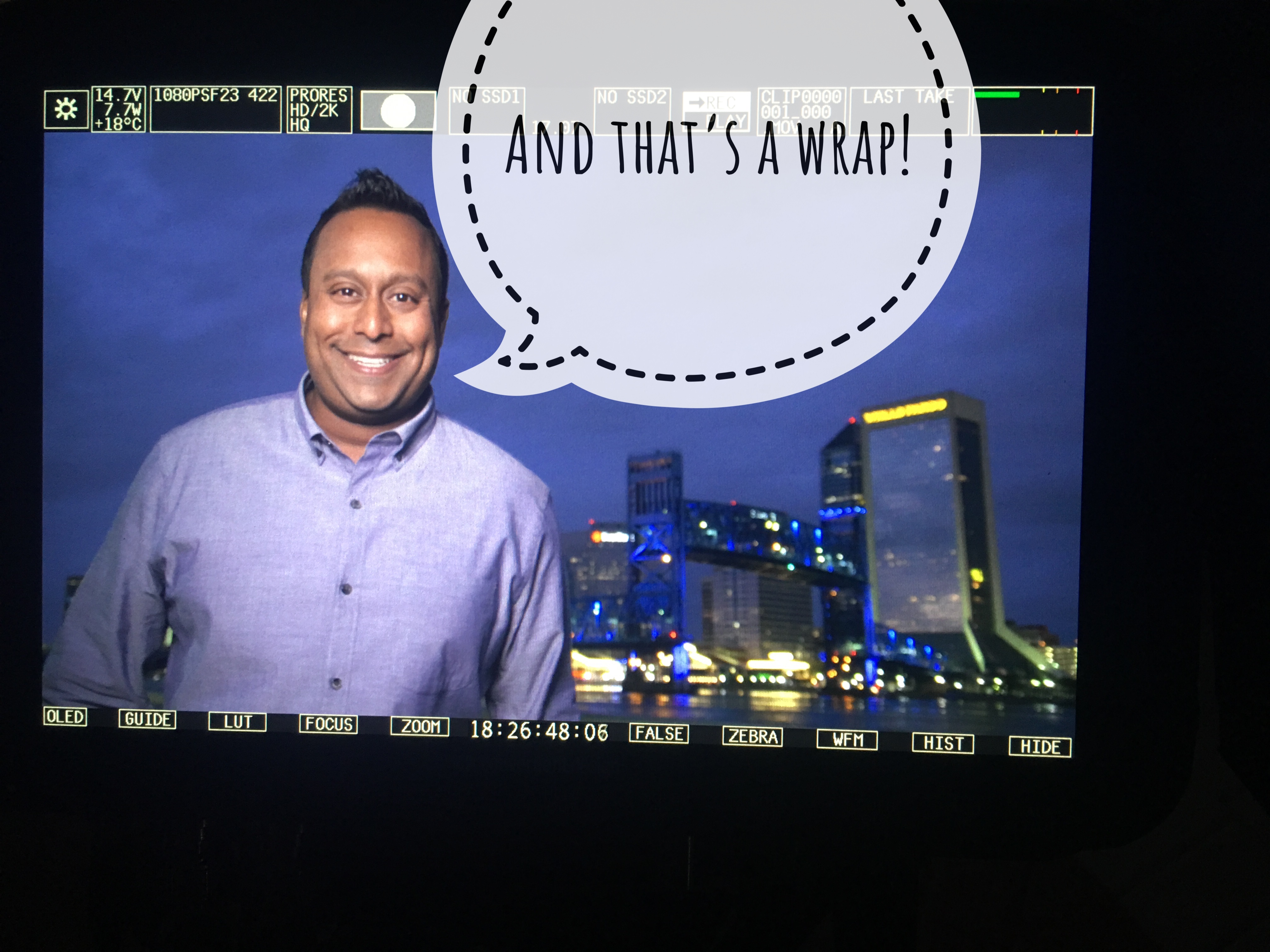 And that is a wrap for Cheap Eats Jacksonville! Great food, great people and a whole new area in Florida to put on the foodie radar. Like the Terminator said: I’ll be back. And you should too for a encore post on the other great restaurants I found in the Jax.

Until my next time my friends . . .  Stay Thrifty.