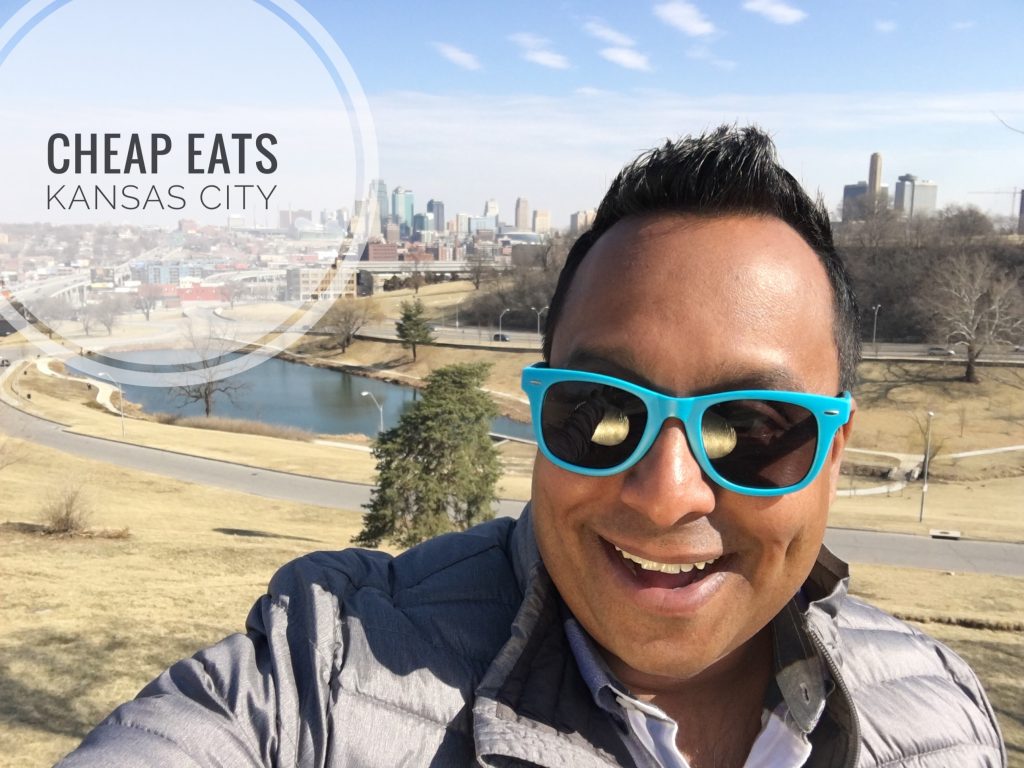 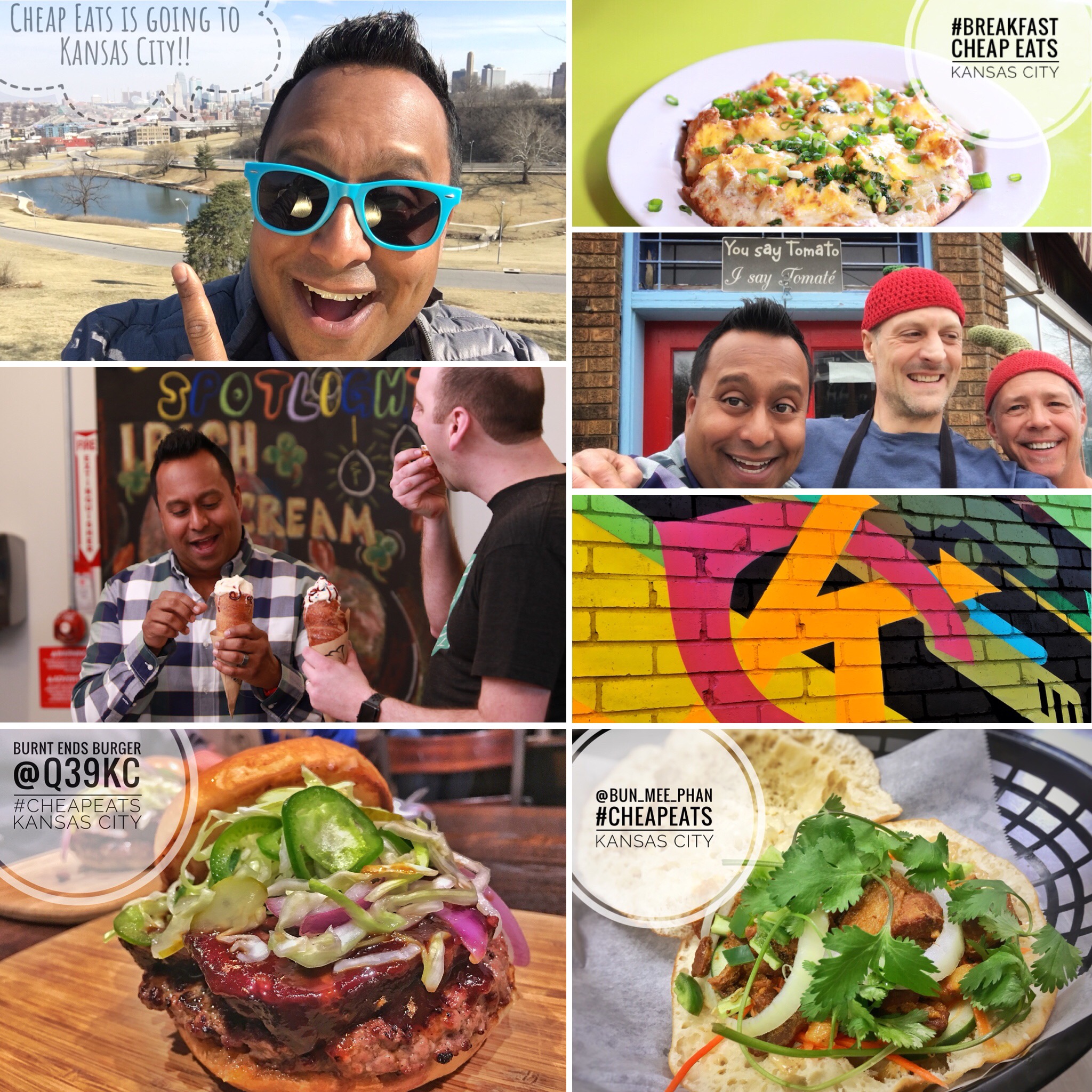 Being a native of St. Louis, it seems mind boggling that Cheap Eats Kansas City would be my first visit to KC . . . but that’s just the cards I was dealt. Beyond the venerable barbecue scene, Kanas City has some tasty diversity and some up and coming neighborhoods daring to do new things; like serving pizza for breakfast! Hungry yet? You will be so let’s take one more big bite out of Cheap Eats Kansas City! 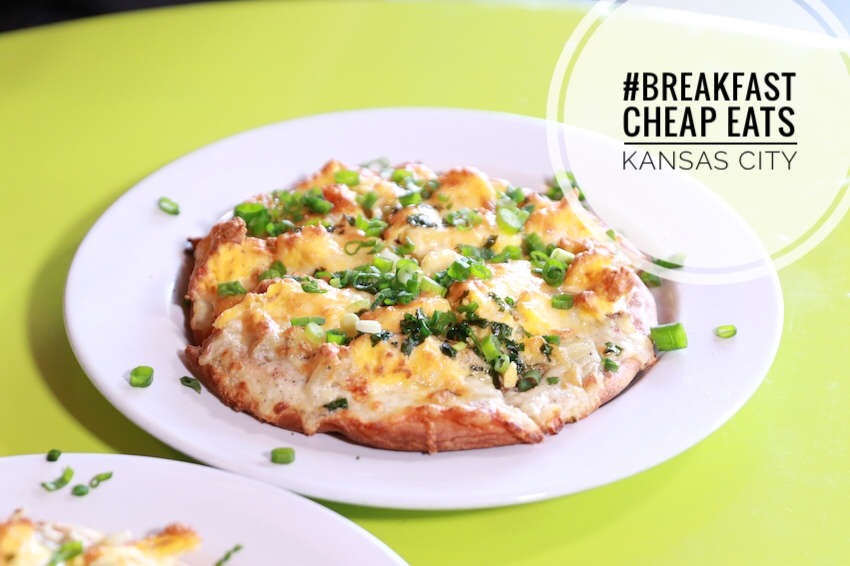 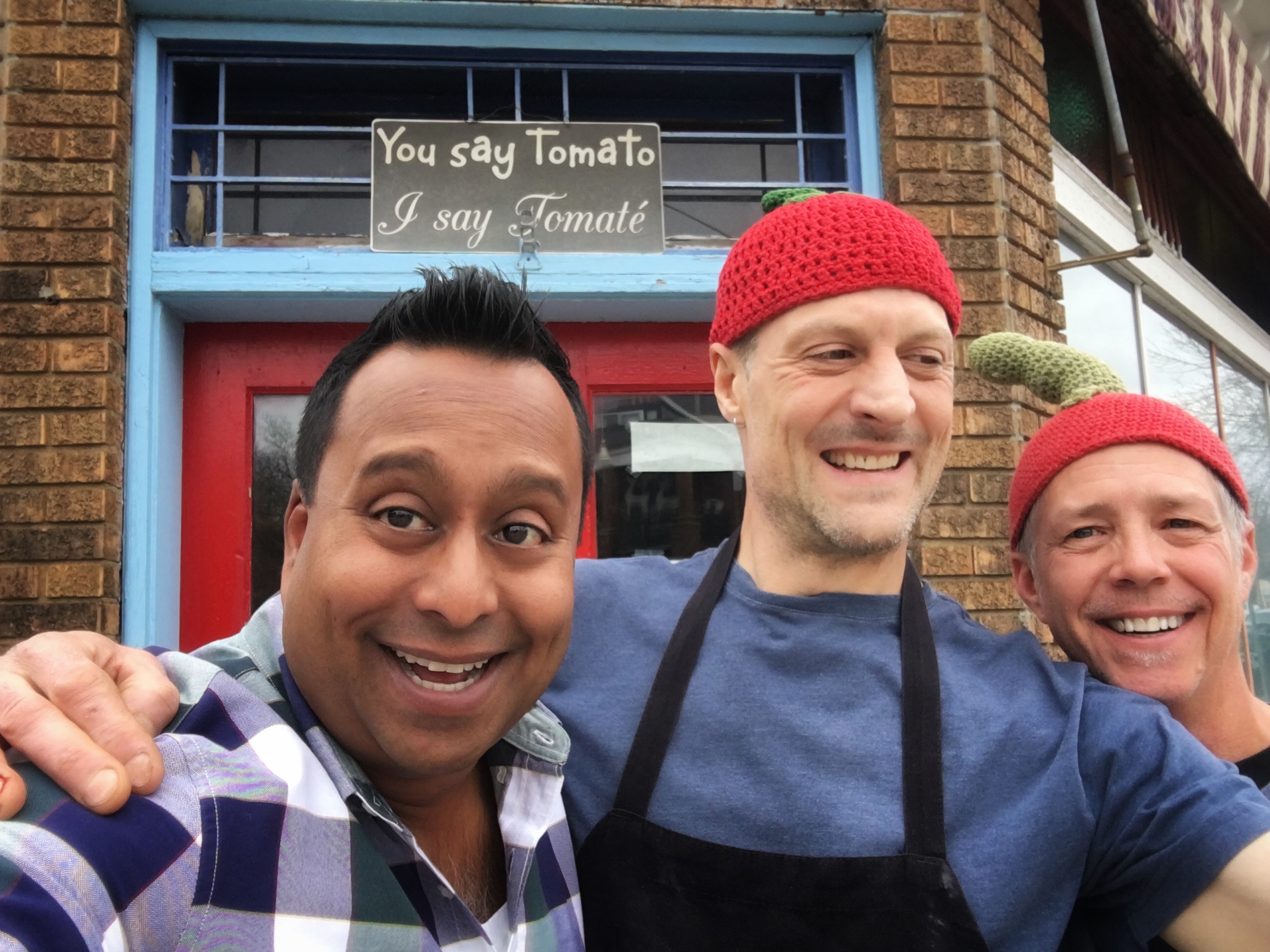 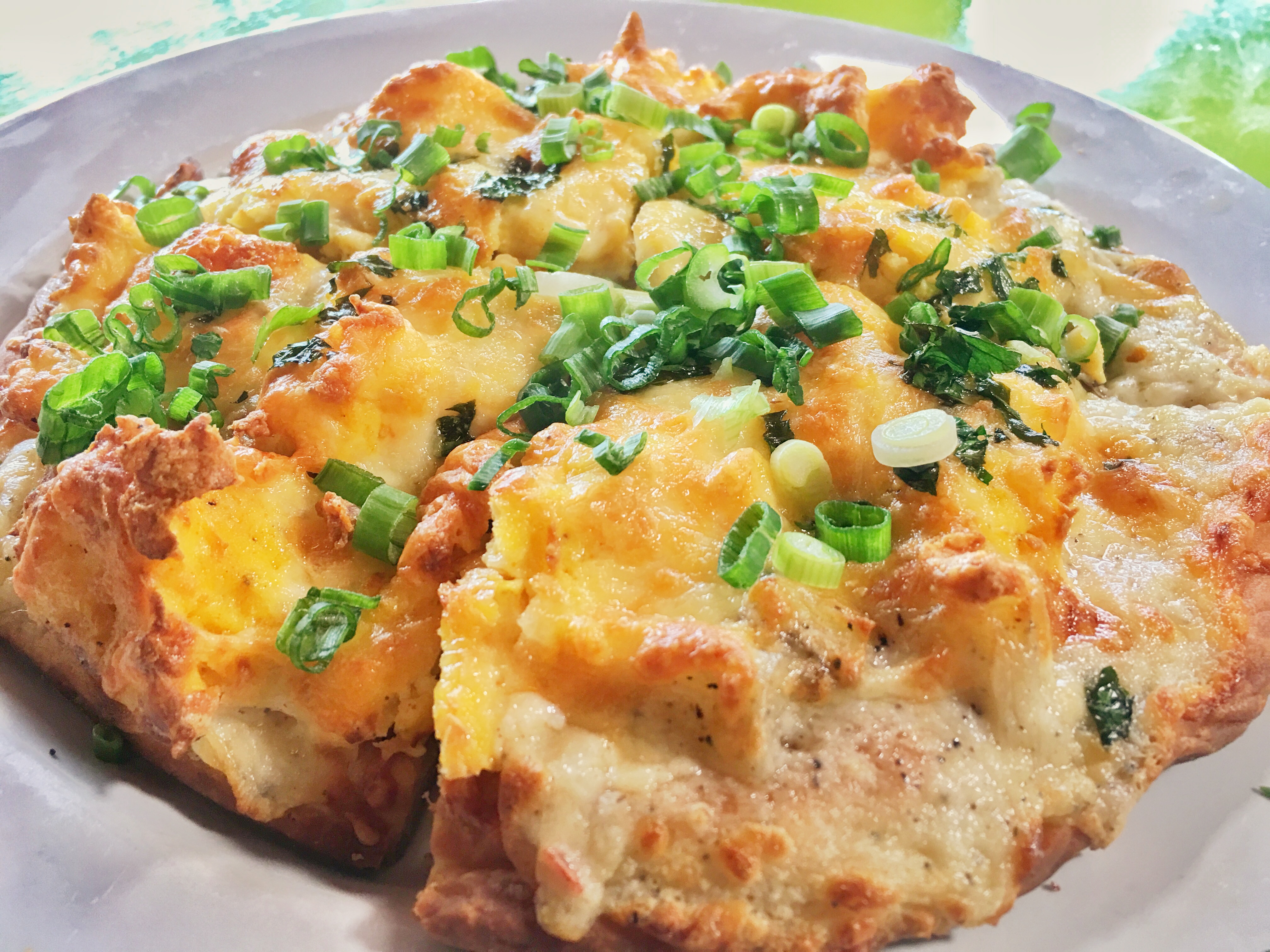 The Vitals:
the spot: You Say Tomato 2801 Holmes st Kansas City MO 64109
the eats: Breakfast Flatbread
the bucks: $9.95
the full nelson: a pizza for breakfast but also for grownups

You say tomato, they say pizza for breakfast, I say Cheap Eats Kansas City just found our first meal of the day! On paper, pizza for breakfast sounds fun, decadent and perhaps irresponsible. Well there is some maturity at work here thanks to Chef Mark Wingard’s smart play of building a vegetarian breakfast pizza topping base with eggs, potatoes and vegetarian country gravy. You can add on bacon, but you don’t need to, this meal is super hearty as is. And filling, though priced at $10, half this pizza is a full on meal. Pro tip right here Cheap Eaters: grab a friend and split the Breakfast Flatbread and try Mark’s Corned Beef Hash, which like the dough for the Breakfast Flatbread, is also made in house. You say tomato sounds like a top choice for a Cheap Eats Kansas City breakfast, I say: check out what we got for lunch! 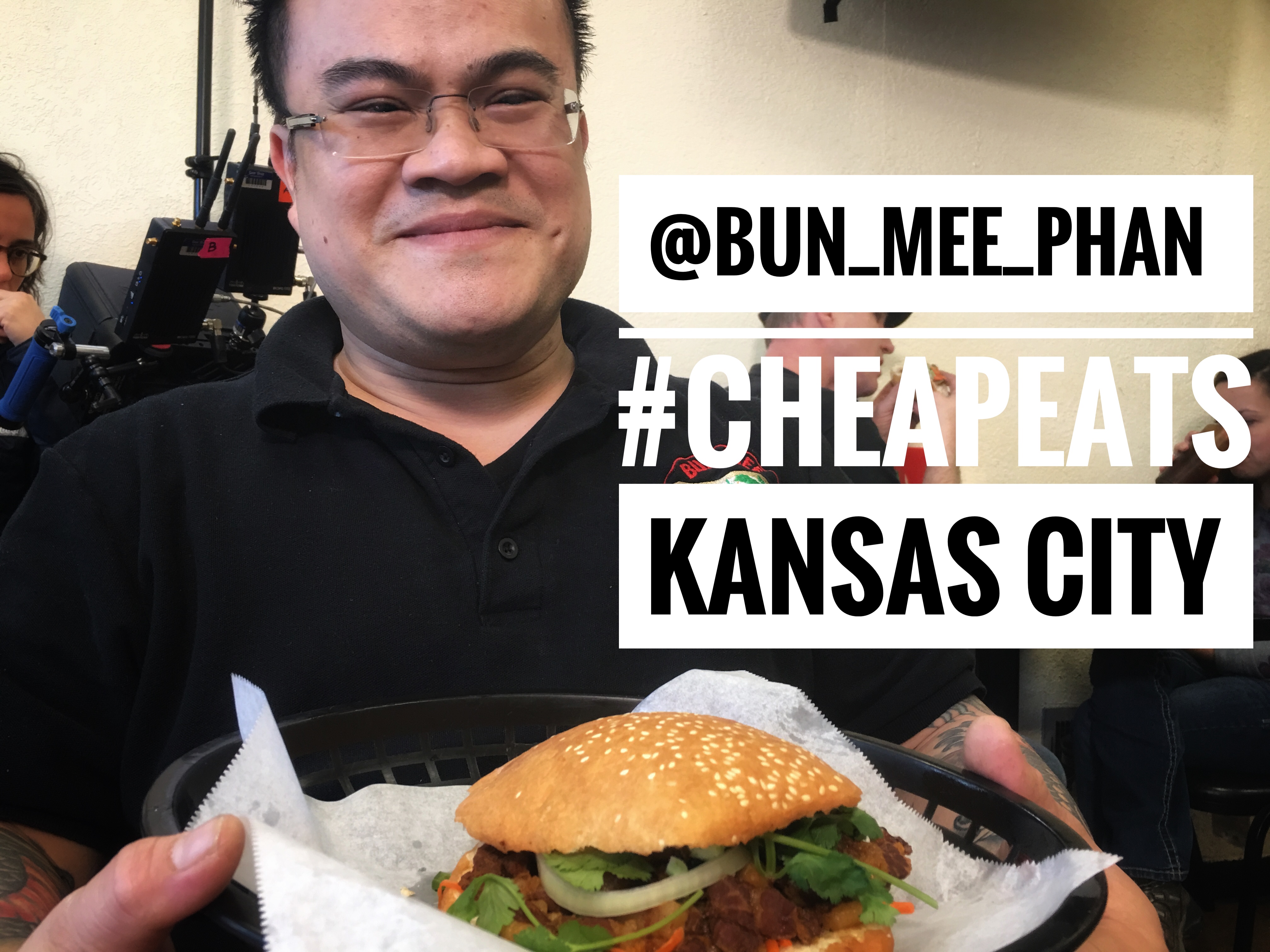 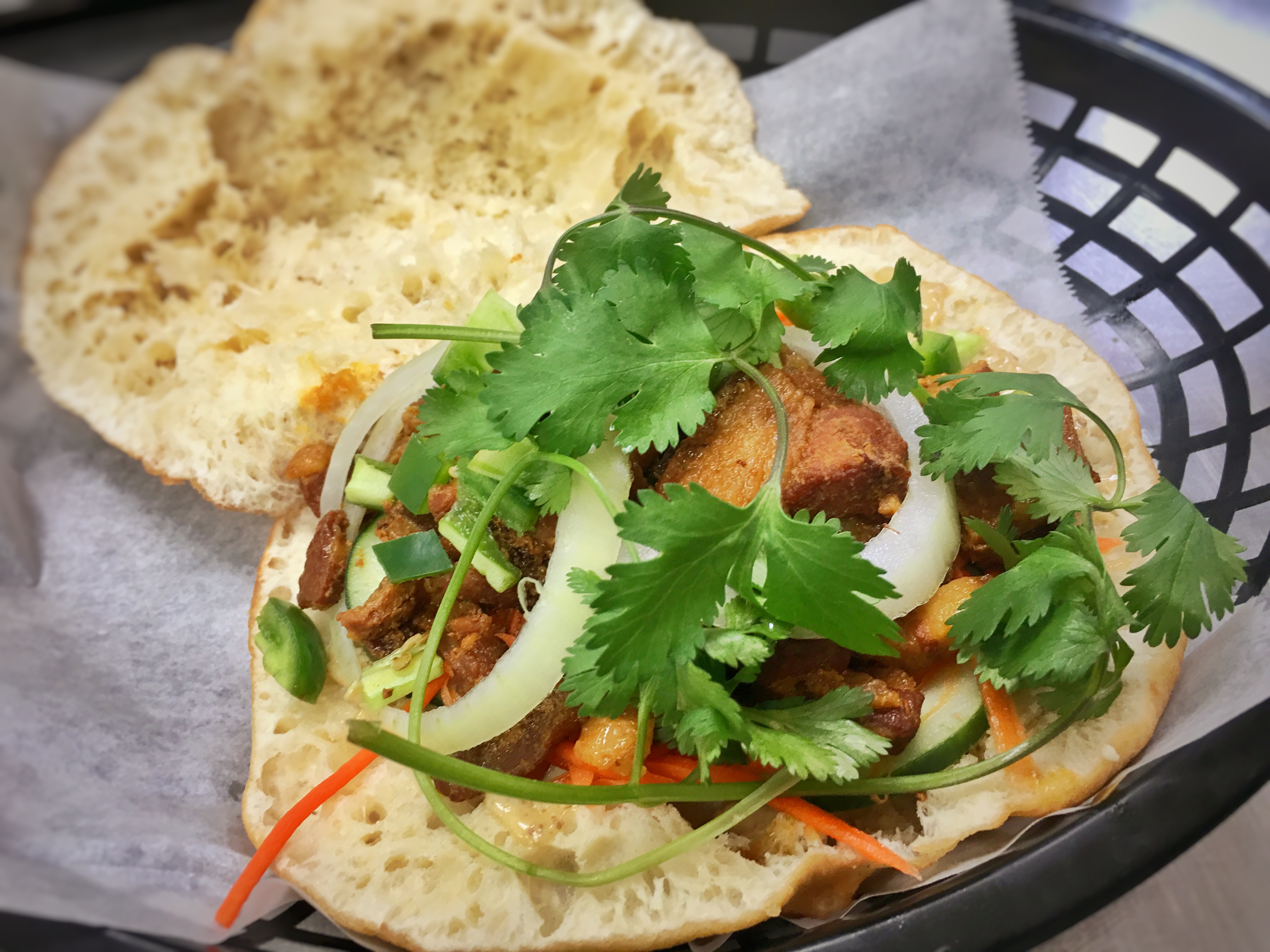 If you have never had a Bahn Mi, the hoagie of Vietnam, you are missing out on a Cheap Eats staple. I remember finding Bahn Mi joints back in my LA days for a measly $2.50 . . . that is Golden Arches prices right there cheap eaters. Granted I could usually crush two of those, but you won’t have that issue Bun Mee Phan, our lunch find for Cheap Eats Kansas City. The Bahn Tieu from Bun Mee Phan is a roundish relative of Bahn Mi, its most important distinction being the substitution of a beignet bread versus a baguette, which is more traditional. Everything in the middle, like the marinated pork belly, the pickled carrot and daikon and the paté spread, are text book Bahn Mi ingredients.

But my favorite part about Bun Mee Phan is without a doubt Jimmy Phan. Jimmy is the epitome of a Mom and Pop restaurant owner chasing the American dream, all the way from Vietnam. Look, Bahn Mi is like pizza, it’s almost always good but what makes Bun Mee Phan the place I would go back to over and over again, is knowing that I’m helping Jimmy live his dream. And that makes for a Kansas City Cheap Eats lunch that is straight up, priceless. 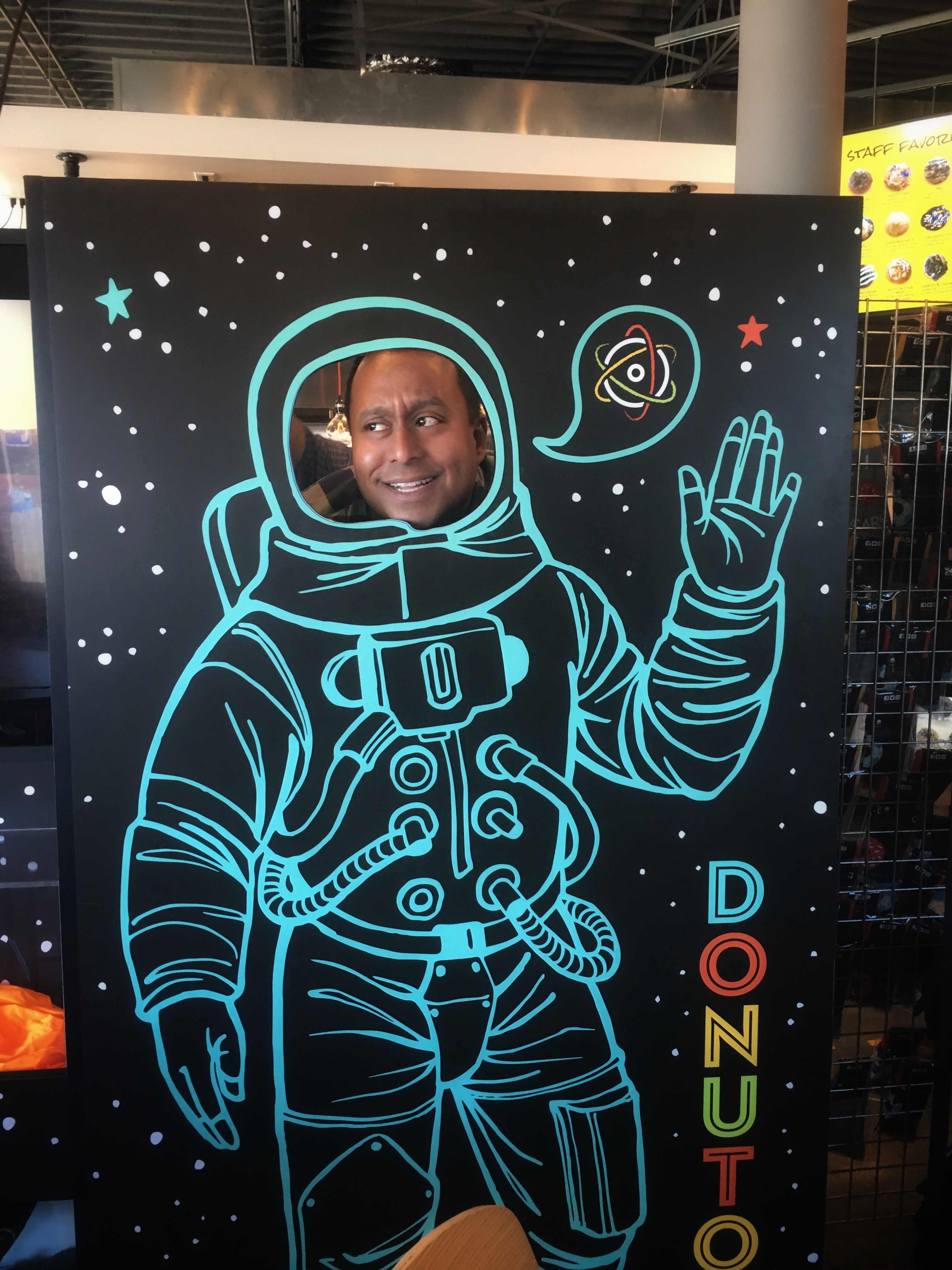 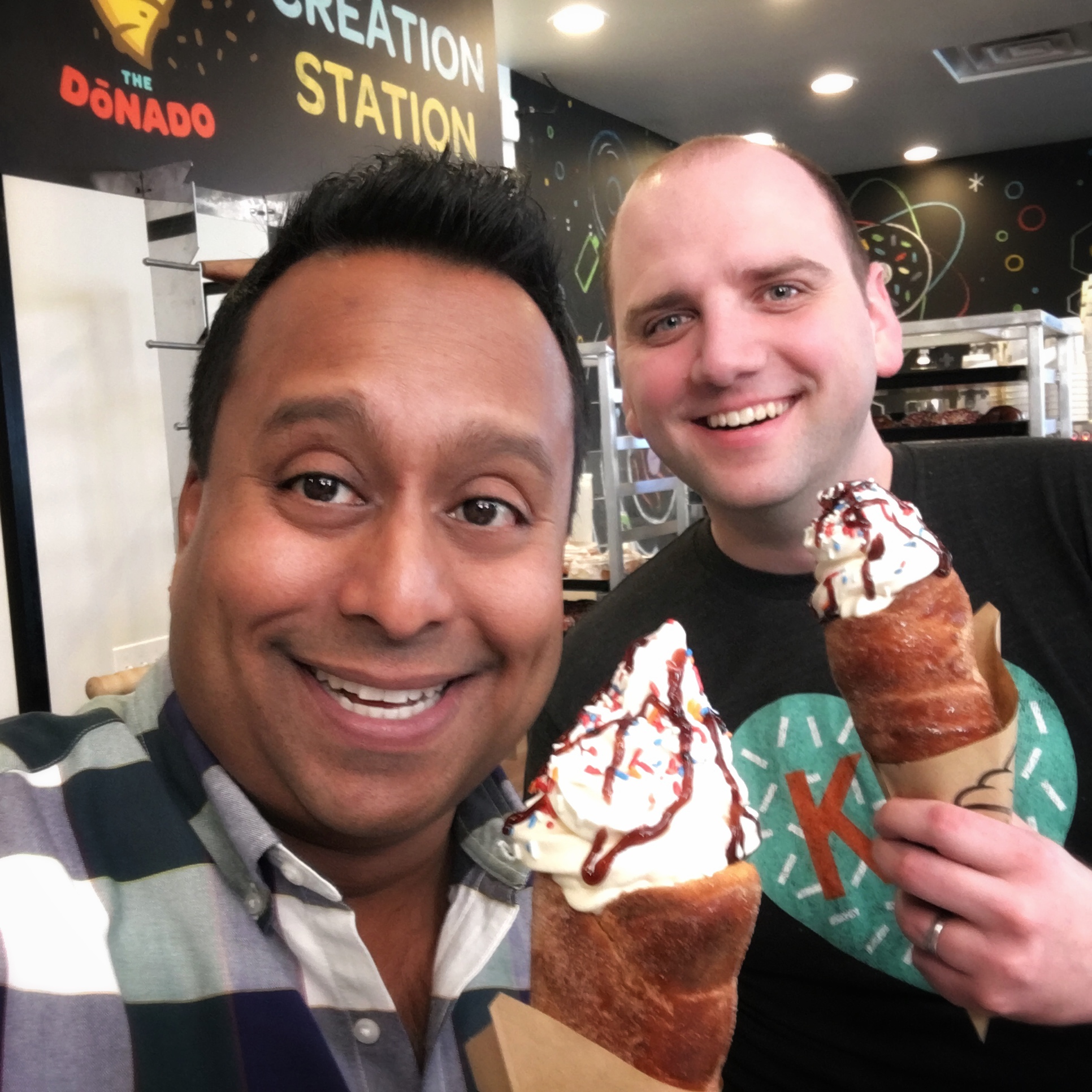 The Vitals:
the spot: Donutology 1009 Westport road Kansas City MO 64111
the eats: Donado
the bucks: $6.99
the full nelson: to boldly go where no donut has gone before

I think it is fair to say that the future of Donuts is at Donutology. From the infared fryer that cooks the donut cone to the soft serve ice cream that the donut cone is filled with; we have come a long way from dunking chocolate long johns in coffee. Which is all thanks to Andrew Cameron, the donut visionary behind Donutology. With a passion for fried dough dating back to his days in summer camp, Andrew had the foresight to add more “build your own” features to the donut dining experience like allowing customers to customize their donuts by picking the toppings, the icing, the drizzle, not to mention the type of donut itself. Be wary with all these options because your baseline Donado will run you $6.99, which gets you just sprinkles. Not the cheapest snack find for Cheap Eats Kansas City, but sometimes one has to take a hit for the evolution of the donut. Especially when that evolution involves a donut turned into a ice cream cone stuffed with a massive serving of soft serve ice cream. 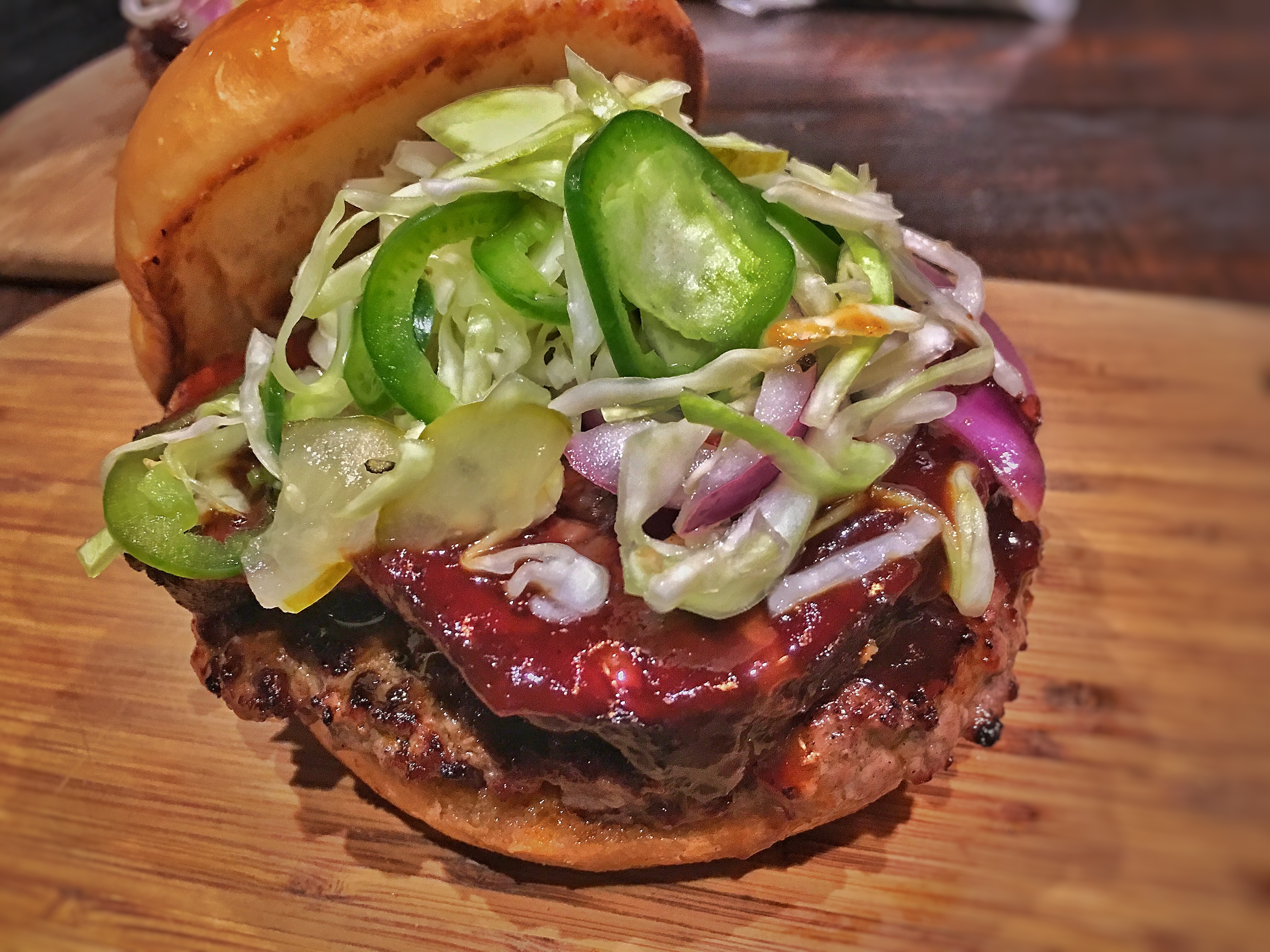 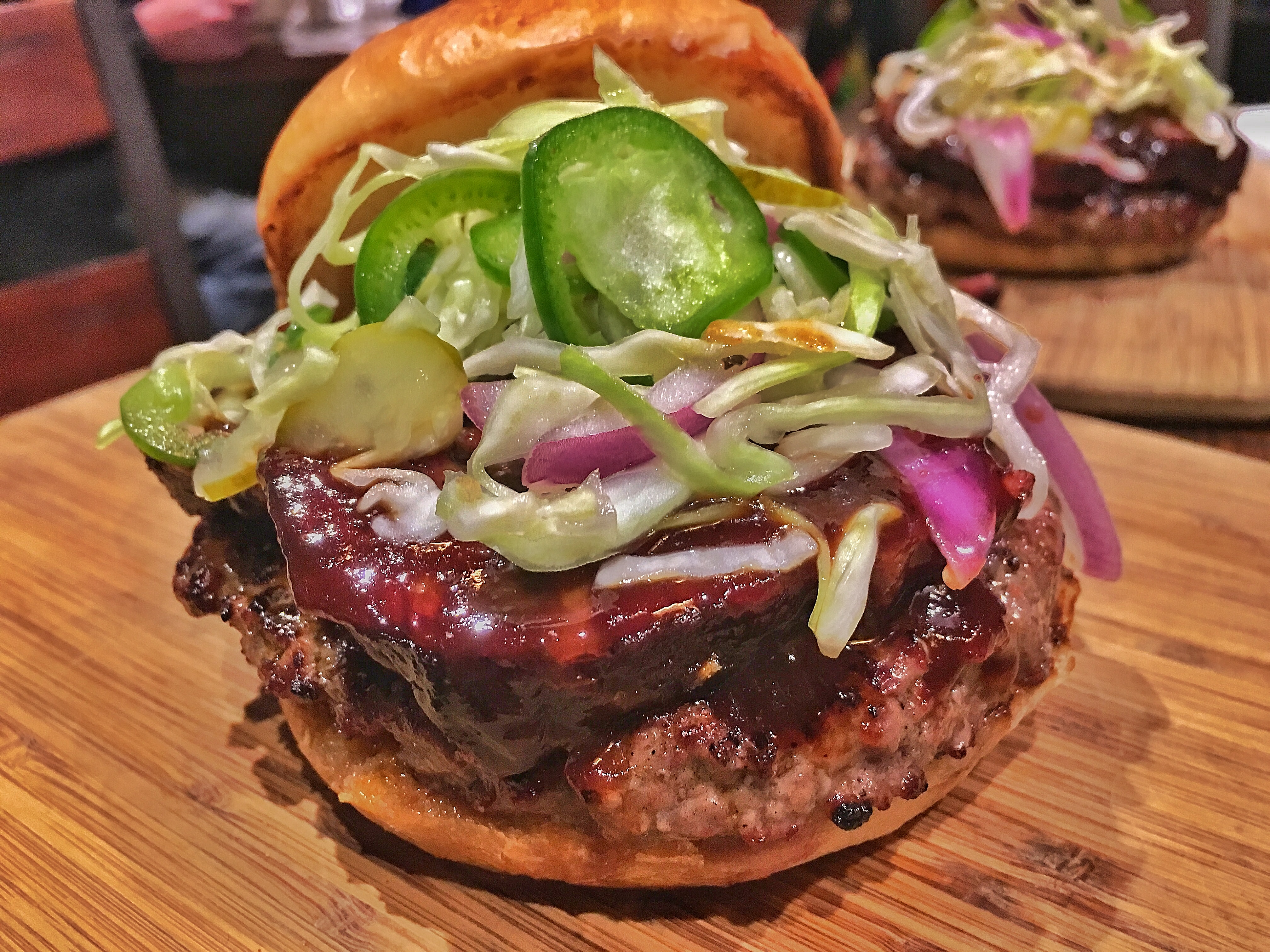 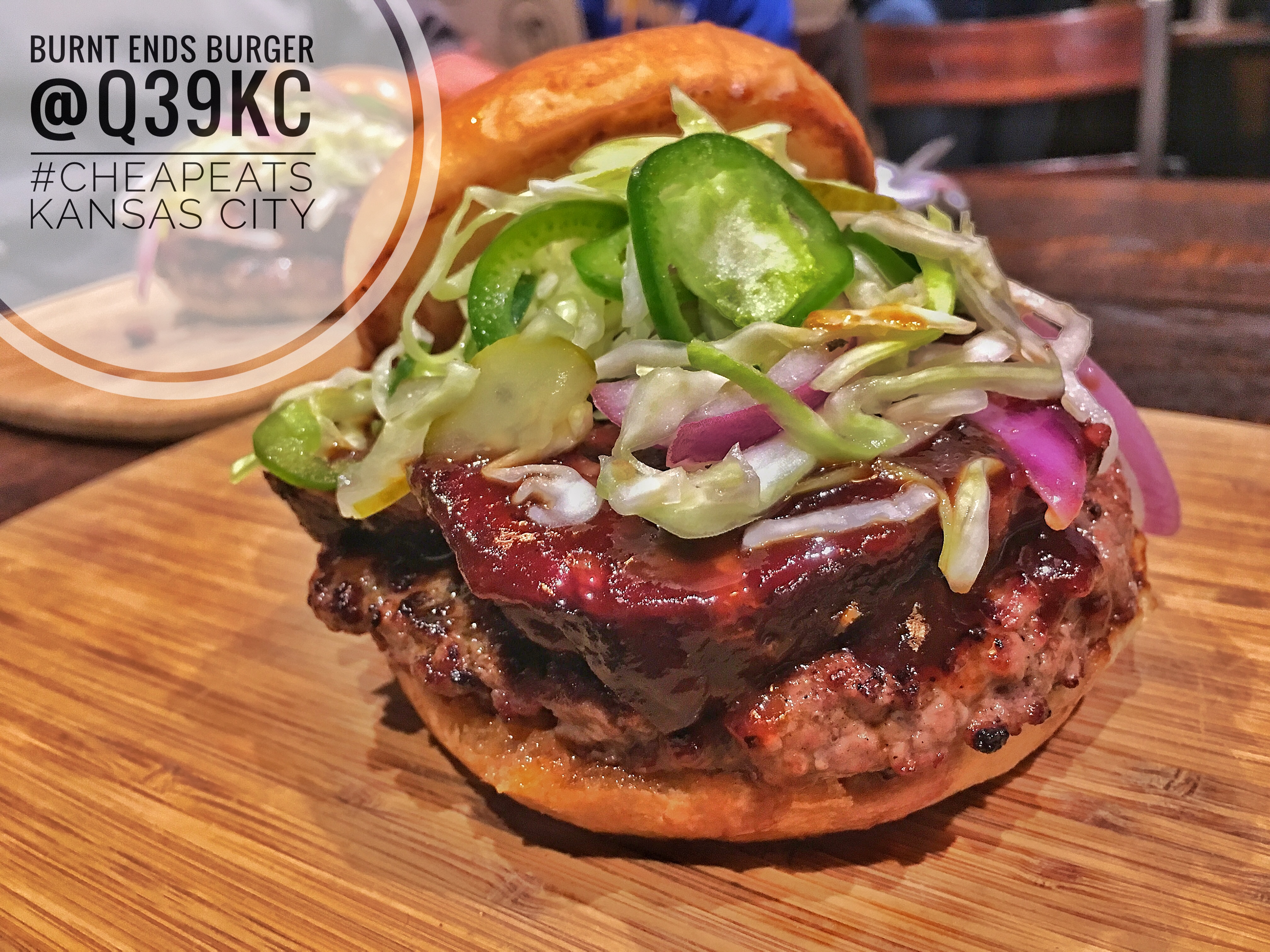 I am not shy about sharing my complete and total bias for Central Texas barbecue. I live 10 minutes away from Franklin Barbecue, whose namesake is the most celebrated pit master of the century. And that isn’t even my go to. That being said, I appreciate a good Carolina chopped pork, love the innovation we found down in Florida in Cheap Eats Jacksonville, and I can definitely tip my trucker cap to the BBQ sauce in Kansas City; Q 39 being a sterling example. You know I have a thing for burgers and some strong feelings against the needless addition of meat toppings(even bacon), chili and in general, barbecue sauce.

Q39 has a killer barbecue sauce that is sweet, which makes it generally more applicable. I love vinegar based sauces but try and put that on anything but pulled pork and you realize its limits. Q39 has one of those sauces you want to put on everything. As far as the burnt ends goes, Chef and Pit Master Rob Magee basically takes the moist end of a brisket and turns it all into burnt ends. I’m not much of a lean brisket guy so you know I’m gonna be happy here. And you get a slab of brisket too as opposed to say a mound of chopped beef. But the slam dunk on why I said “this was the best burger I have ever had”(bold words yes but remember this is a title that is always in a state of flux) was perhaps mostly due to the smart topping choice. A jalapeño spiked coleslaw in an acidic dressing is ALL YOU NEED for a burger boasting a 75/25 meat to fat ratio that is also topped with beef brisket. Oh, P.S. – NO CHEESE HERE. One issue with our burger revolution of the last 15+ years is everybody imitates everybody else. Tell me the last time you had a killer burger that had ZERO CHEESE? It’s a bold move and I respect the hell out of it.

Bottom line is that Chef Rob was obsessed about how to make a burger topped with brisket work and that’s the key here. What might seem like over the top meat mayhem is actually a well thought meat feast on a locally sourced bun. So worth the $12 and so worth breaking the budget. 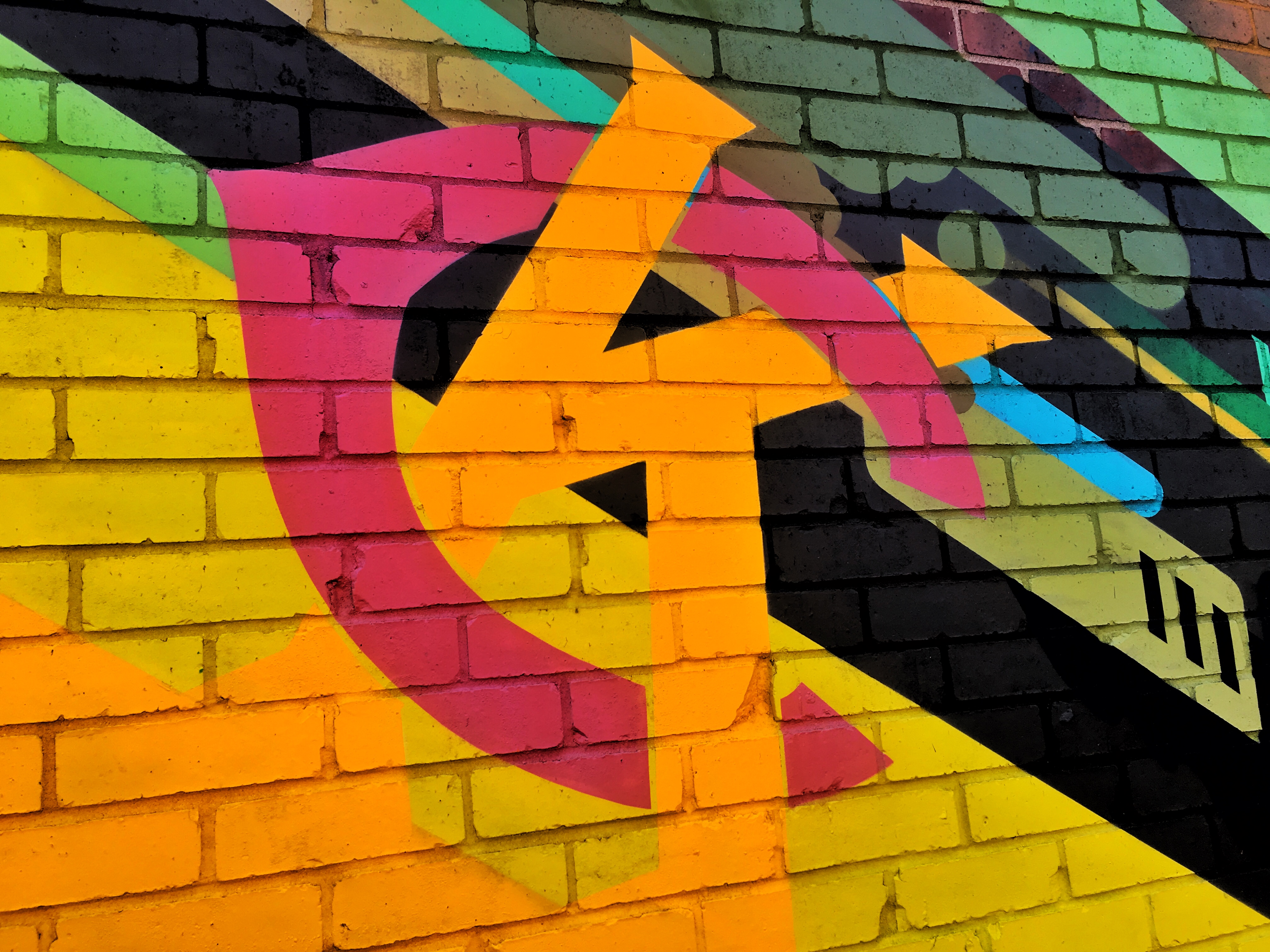 And that is how Cheap Eats Kansas City is done! I broke the budget but that burger was beyond worth it and if I lived in KC, I promise you I would be a regular over at You Say Tomato. Throw in some serious donut tech and Jimmy Phan and Kansas City turns into a city worth making a food vacay for.