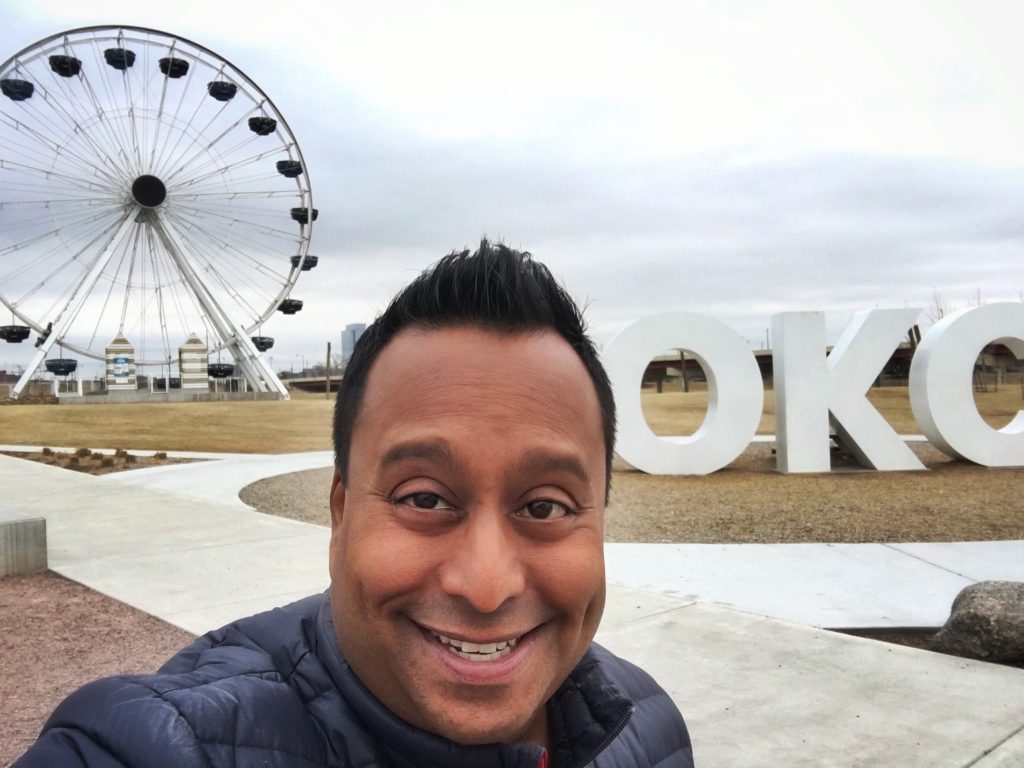 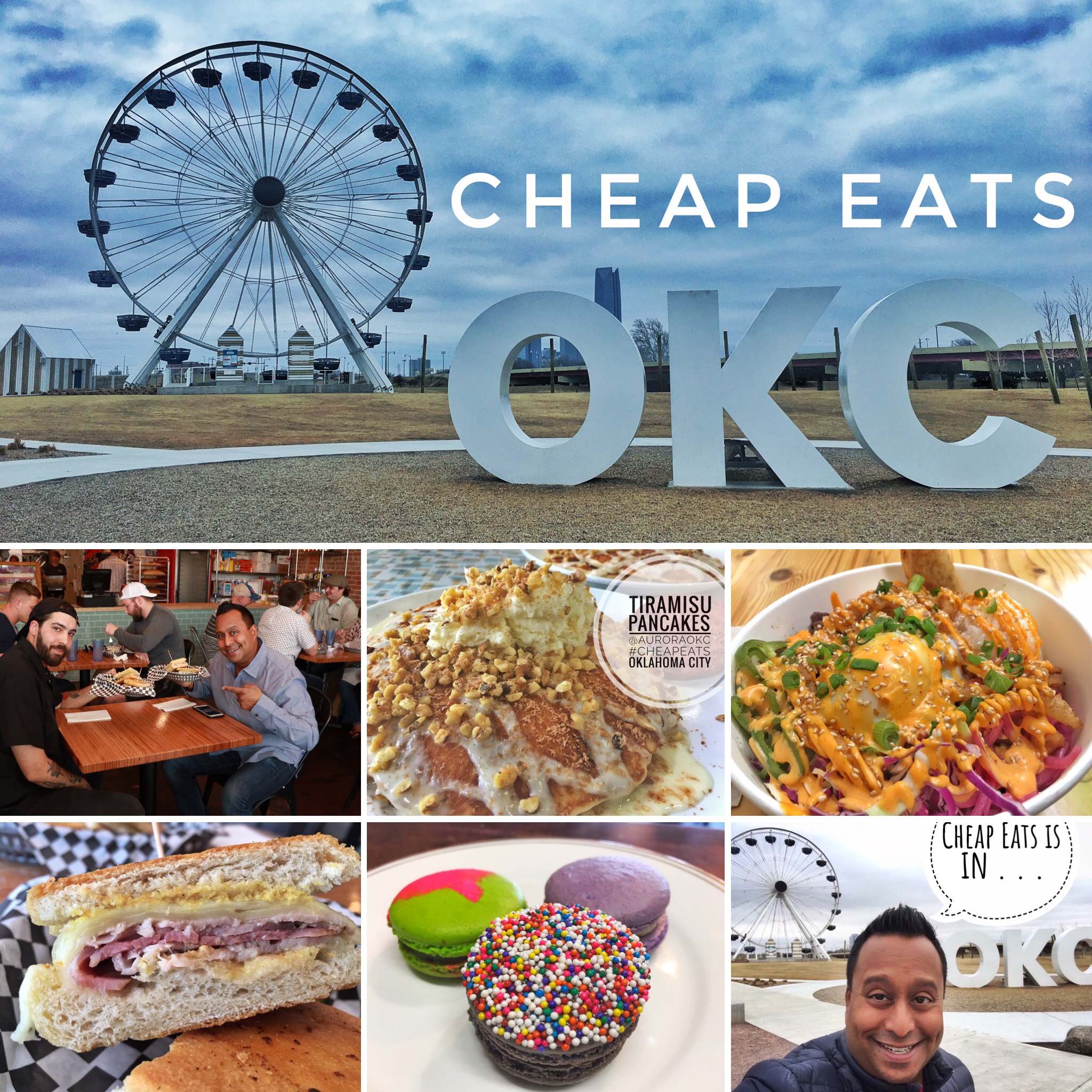 When I look at the line up for Cheap Eats Oklahoma City, larger cities with big food reputations like Chicago come to mind. With a population of just over 600k, you might not expect to find legit macarons in OKC, but low and behold, OKC has LEGIT Macarons. And I wish we had a deli as good as Scottie’s down here in Austin. Well, you know what happens now. I’m gonna stop beating around the bush take you back for one more bite of Cheap Eats Oklahoma City! 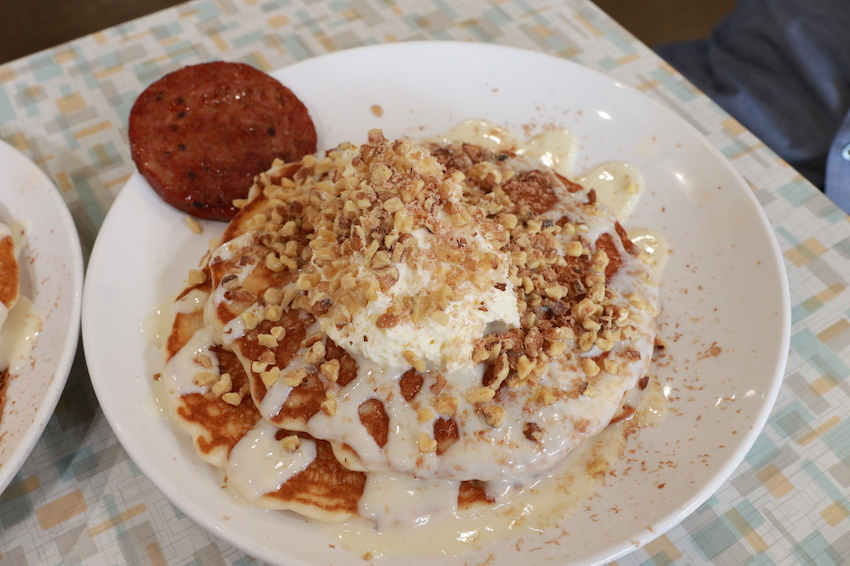 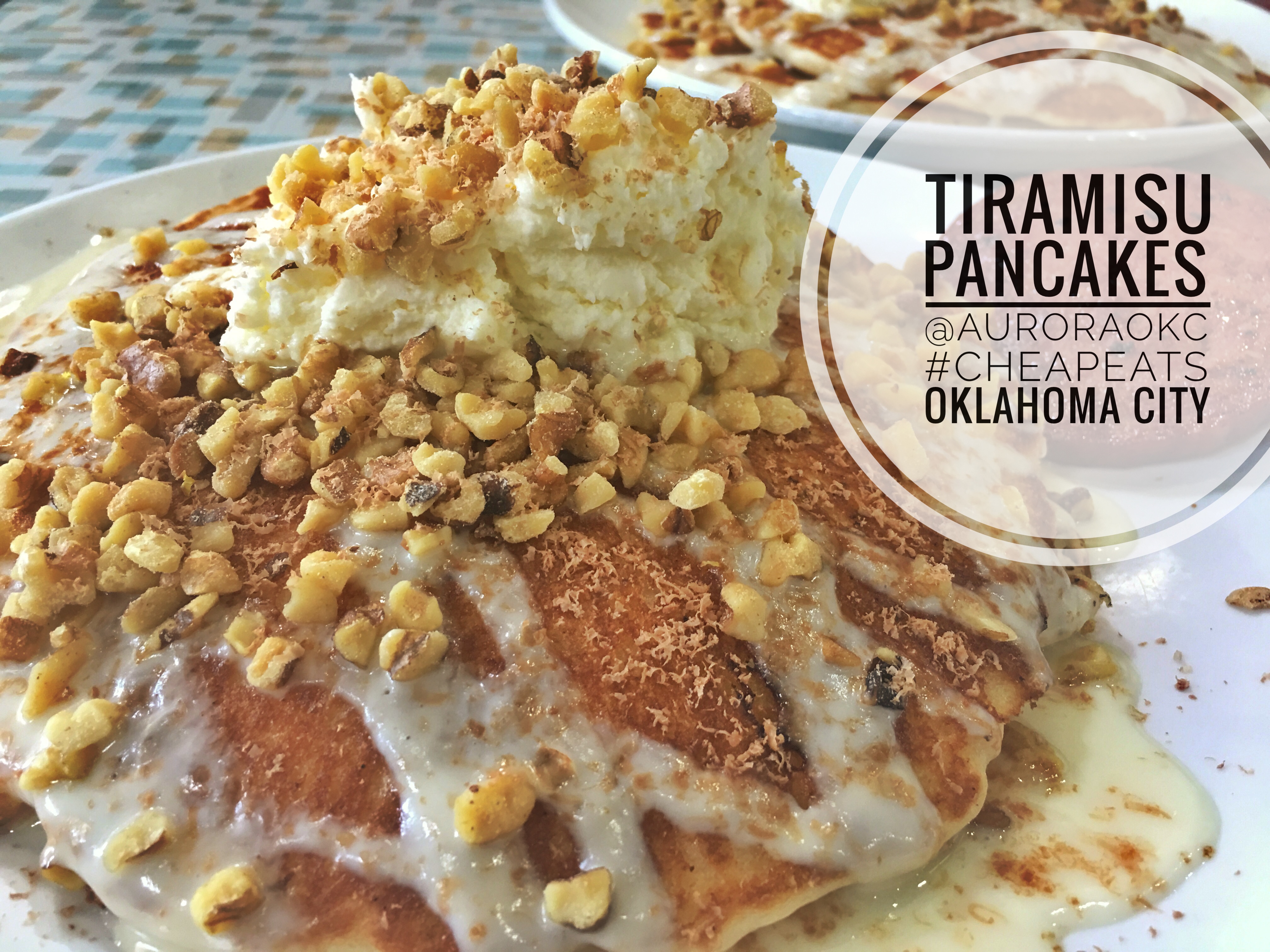 Aurora Breakfast Bar and Backyard has a vibe that is very much the standard for many restaurants down here in Austin. Think bright colors, appealing outdoor seating by way of picnic tables, cafe lights and astro turf for kids to run around on. Oh and throw the word “bar” into the mix and suddenly your breakfast becomes a gateway to some quality day drinking. Now, to pull off Tiramisu pancakes, you are gonna need a chef who has literally done time in Italy to honor the classic Italian dessert. Enter Chef Henry Bourdreaux who did just that plus a couple stints around Oklahoma City’s restaurant scene and managed to be named one of the top 5 chefs in town by the Oklahoma Gazette.

Hype is nice, but even better are pancakes soaked in a crème anglaise. He pulls off the Tiramisu effect with some smart ingredient swaps like walnuts for the lady fingers and almond cream for mascarpone. Truth be told, it never crossed my mind once on how to make Tiramisu, only to order it whenever I can get. So dropping $11 to get it for breakfast was simply a must order for Cheap Eats Oklahoma City. 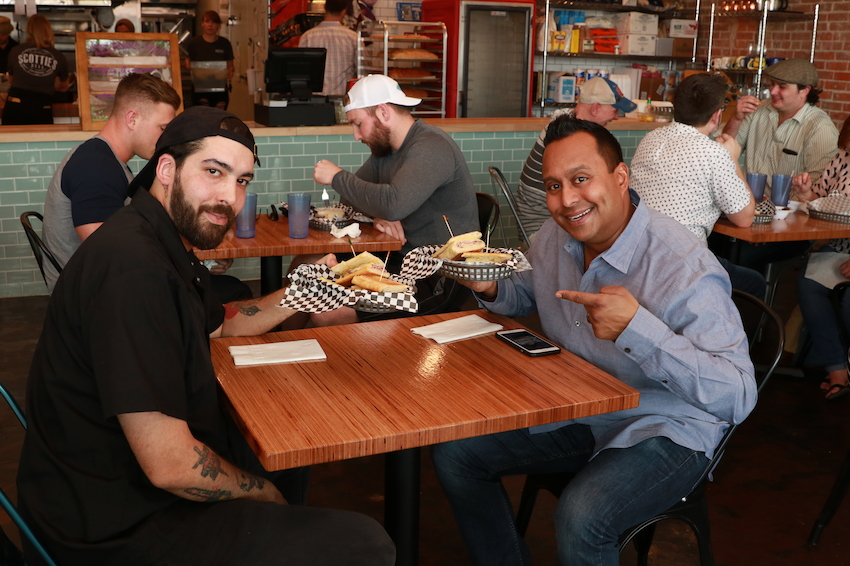 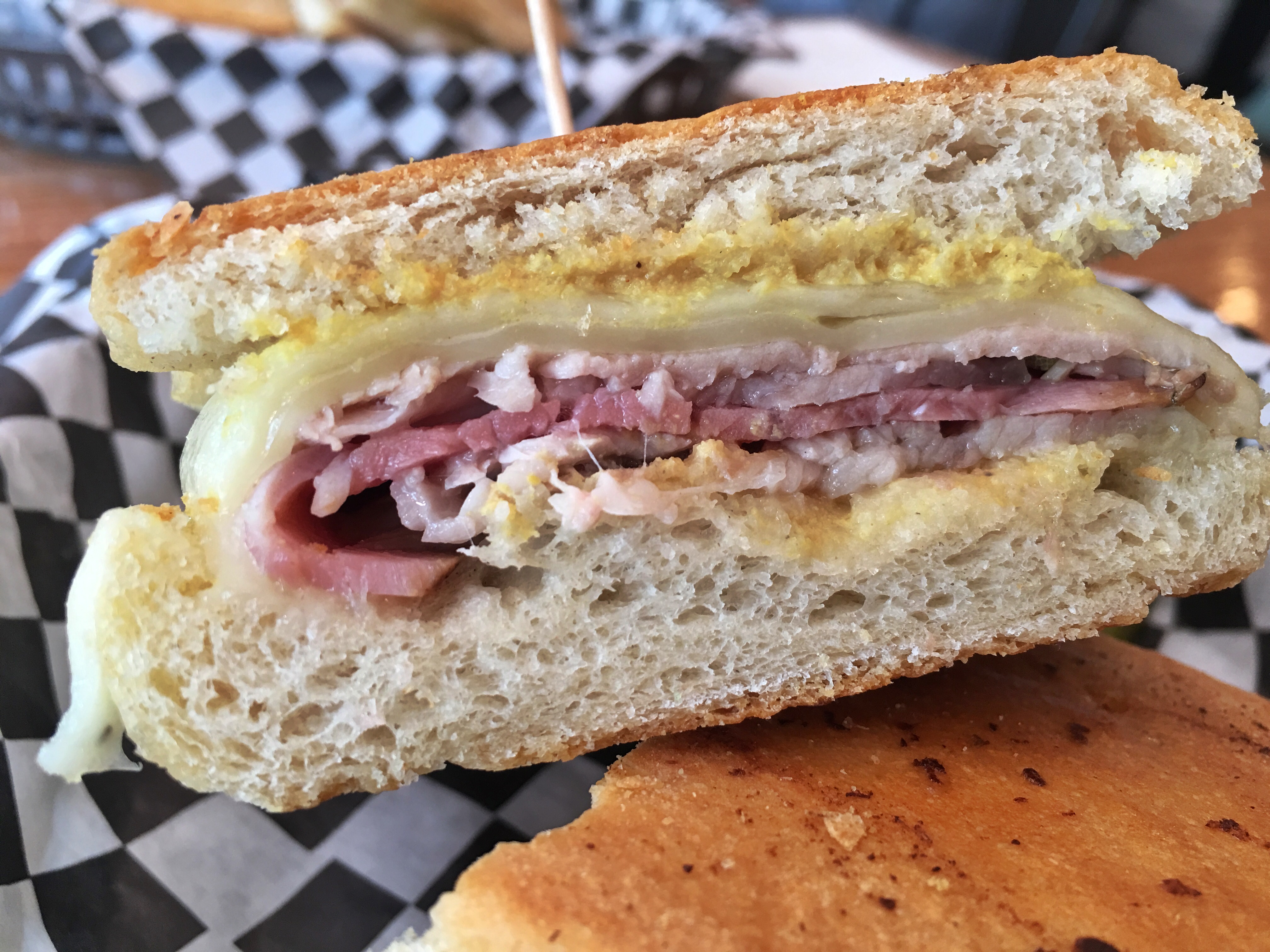 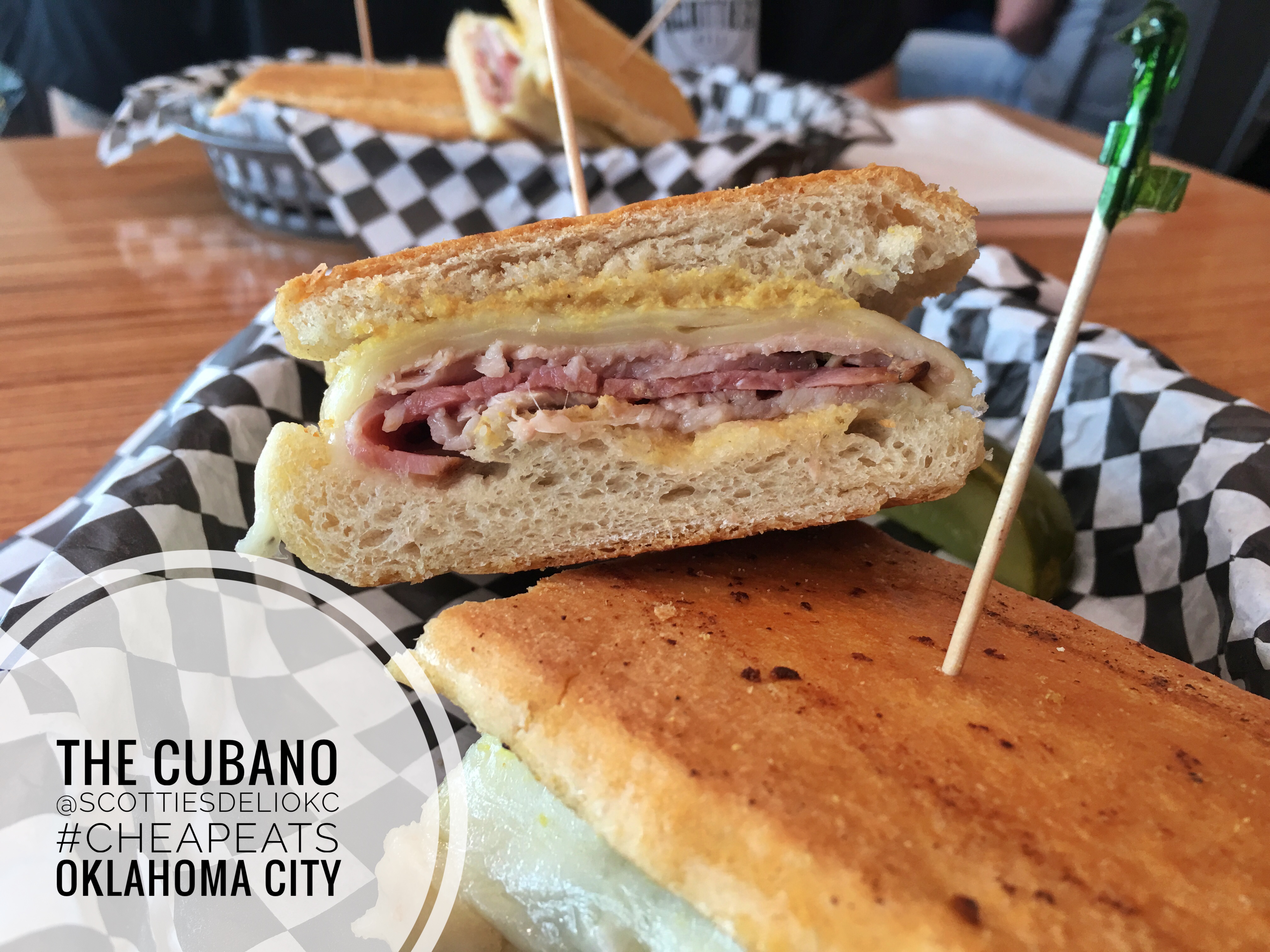 The Vitals:
the spot: Scottie’s Deli OKC 428 NW 23rd st Oklahoma City OK 73103
the eats: Cubano sandwich
the bucks: $9
the full nelson: one of the better sandwich shops I have ever been to

Scottie’s Deli is the truth.

And I say that after visiting some sandwich icons on Cheap Eats, in places where one might expect to find them, namely Philadelphia and New York City. But this is Cheap Eats Oklahoma City, and yes, one should be surprised to find something like a legit Cubano sandwich here. There might not be a sizable Cuban population in OKC, but there is a chef who also happens to be a Florida transplant by the name of Jake Red Elk and he is making moves in the kitchen. First he marinates the roasted pork in a classic Cuban mojo for 36 hours, plus he makes his own ham and mustard. I mean, how many delis have you been to that make their own hams and mustard? Sorry Miami, but the Cubano at Scottie’s deli in OKC is giving you a run for the money. Oh take a peek at that pressed bread on the Cubano. Yup, that bread is made in house too. I’ve had huge sandwiches and sandwiches stuffed with meat, but give me a sandwich where 90% of the ingredients are made in house and I’ll pay $9 bucks for it all damn day. This Cheap Eats Oklahoma City lunch is worth visiting twice in the same trip Cheap Eaters. 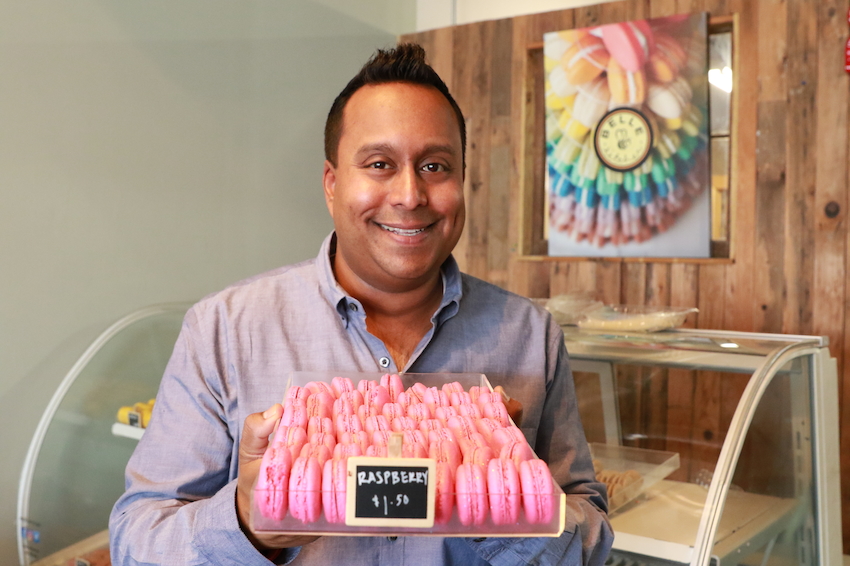 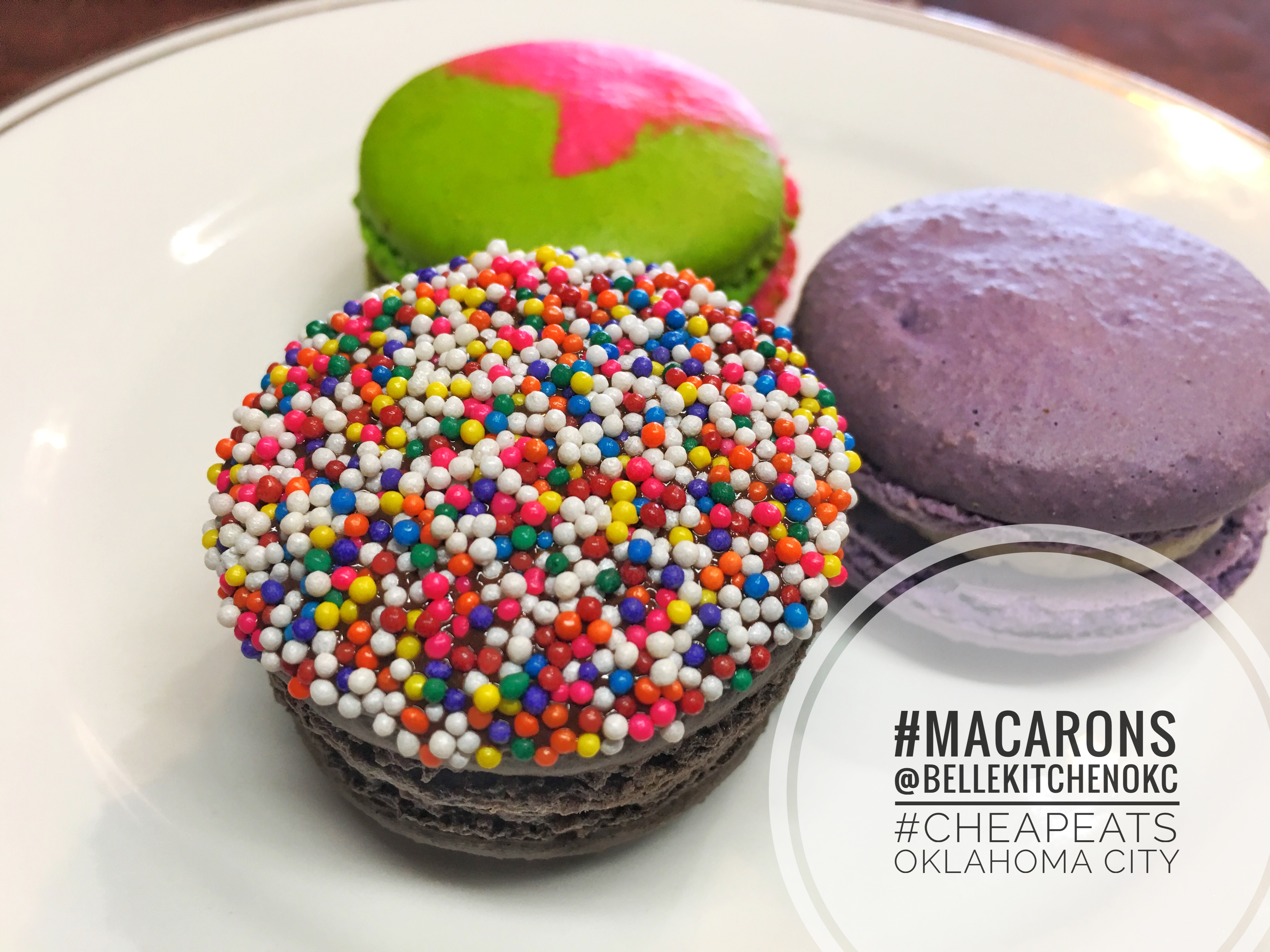 I pride myself on an upbringing where I was exposed to elegant foods. At a young age I was instantly attracted to shellfish and paté, and relished in taking on multiple course meals. Yet even with a penchant for French cuisine(I did grow up in the 1980s) I never had a macaron till Cheap Eats Oklahoma City. Well, I should say I never got the fascination for macarons until Cheap Eats Oklahoma City. I’m sure at some patisserie I grabbed one along with more familiar favorites like Chocolate Mousse or a Napoleon, and amongst that heavy crowd, the wonders of the Macaron were lost.

Essentially a cookie; egg whites, sugars almond flour combine to create a batter that is then baked. Light in texture and sweetness, the fun begins with the spiking of different flavors. Belle Kitchen does like to have some fun in this department, especially with eye catchers like the Strawberry Lime. Most fascinating though was the Honey Lavender. Chef and owner Cheryl Belle spent some time in the Provence region of France, where lavender grows wild and is used often in cooking. While most of us connect lavender as a fragrance, it works as an aromatic flavor as well. Without doubt the honey lavender macaron was one of the most interesting flavor profiles I have ever come across. Not bad for a $1.50 cookie. 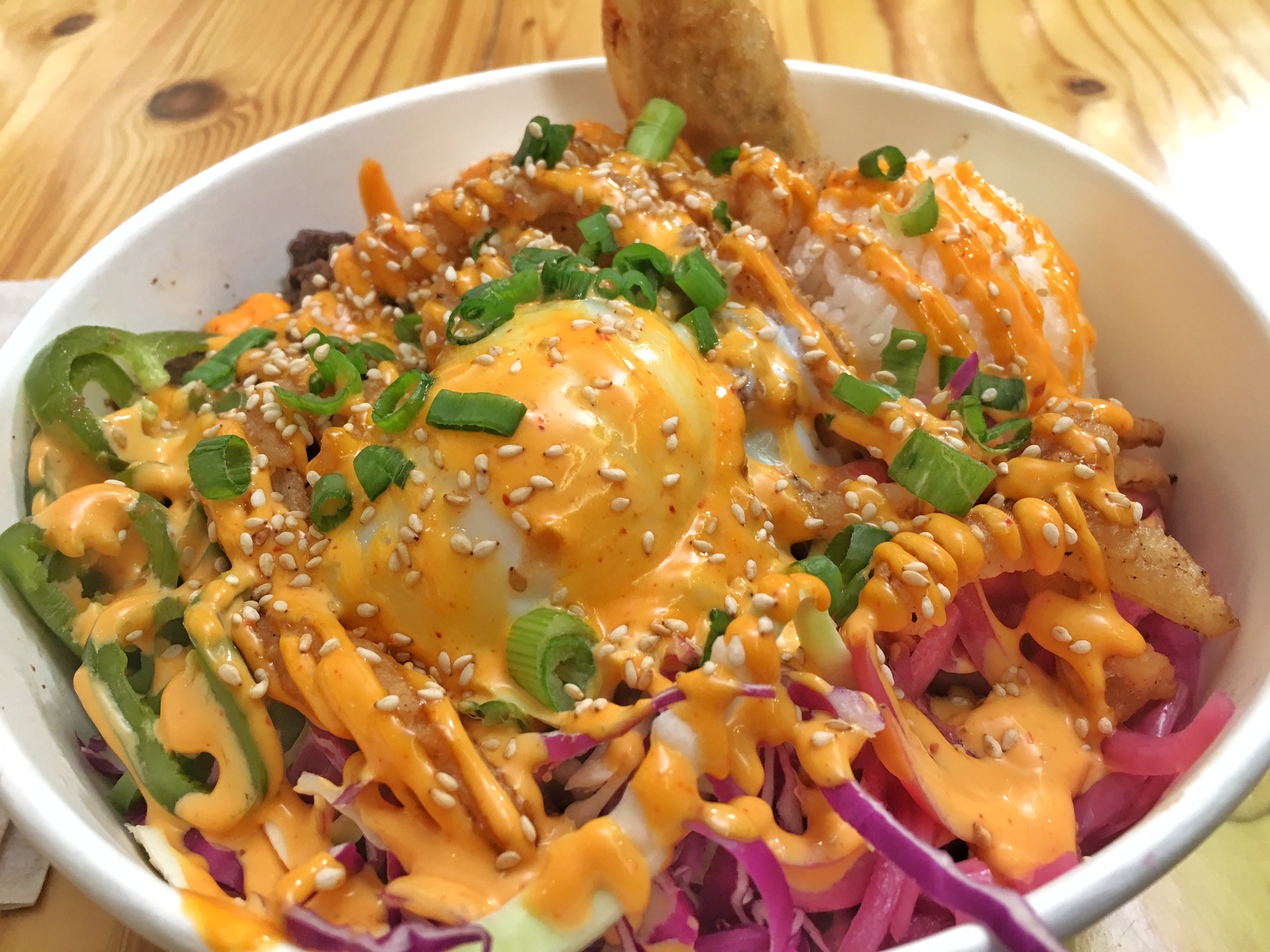 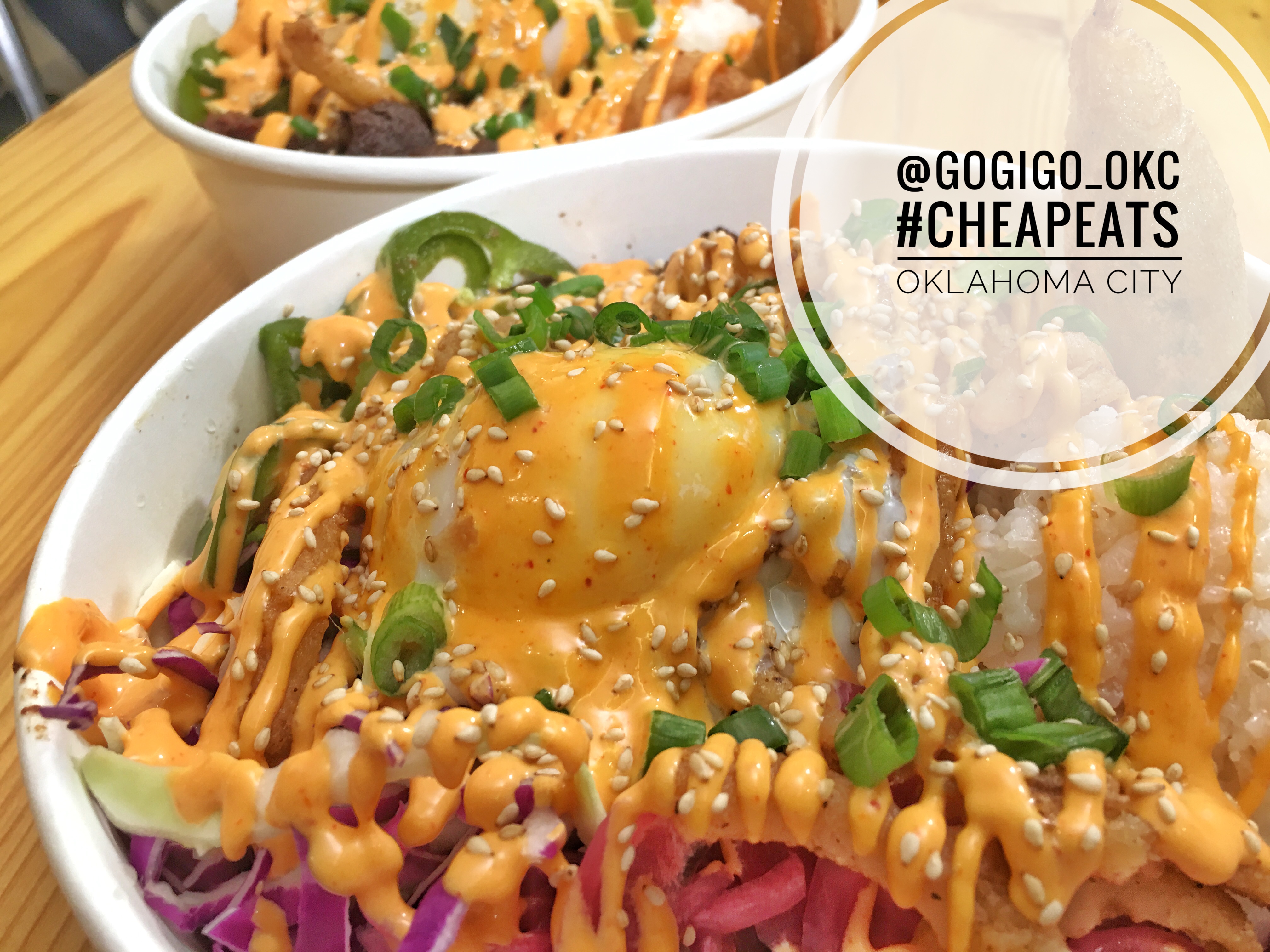 I’d like to think my 20 years in Los Angeles got me accustomed to Korean cooking. Long before Roy Choi united the taco with Korean BBQ, I found my footing amongst the strong flavors of fermented cabbage in Kimchi, the addicting sweet and savory combo of soy sauce and sugar in bulgogi(Korean bbq beef) and even figured out that adding a fried egg to a dish(bibimbap) is almost always an improvement. And this was back in the 90s. Still one cannot underestimate the power of introducing an entire cuisine through the prism of the fast casual concept. Which sums up Gogi Go to a tee.

Now $12 for a rice bowl might seem pricey for a fast casual restaurant but that is also exactly what made Gogi Go’s signature beef bowl a proper dinner for Cheap Eats Oklahoma City. This bowl be heavy and generous, and not just with the rice either. You get a good amount of thin sliced rib eye steak here and the cabbage plus the pickled onions and pickled peppers are flavorful compliments to the marinated rib eye. Speaking of marinade, there is a bit of a reverse order here. Chef Kevin Lee sears the meat and then adds the marinade onto the grill, essentially cooking the meat in a pan sauce. This move prevents the meat from steaming should the flat top become crowded. Now I do approach Korean BBQ like an American, meaning I tend to pick at the rice and go all in on the meat. But that’s not how it works at Gogi Go. Chef Kevin Lee told me that you need to crush the rice to really savor the meat and he’s right. Like sushi, the rice allows you to relish the flavors more in Korean BBQ. Serving it in a rice bowl ensures that mixing of the steak and the rice will happen.

All in all Gogi Go is a place that just makes me happy. A meal that’s almost enough for two to share and in a city where you might not expect to find a Bulgogi bowl, it all adds up to the fact that 2018 is an exciting time for Korean food in America. 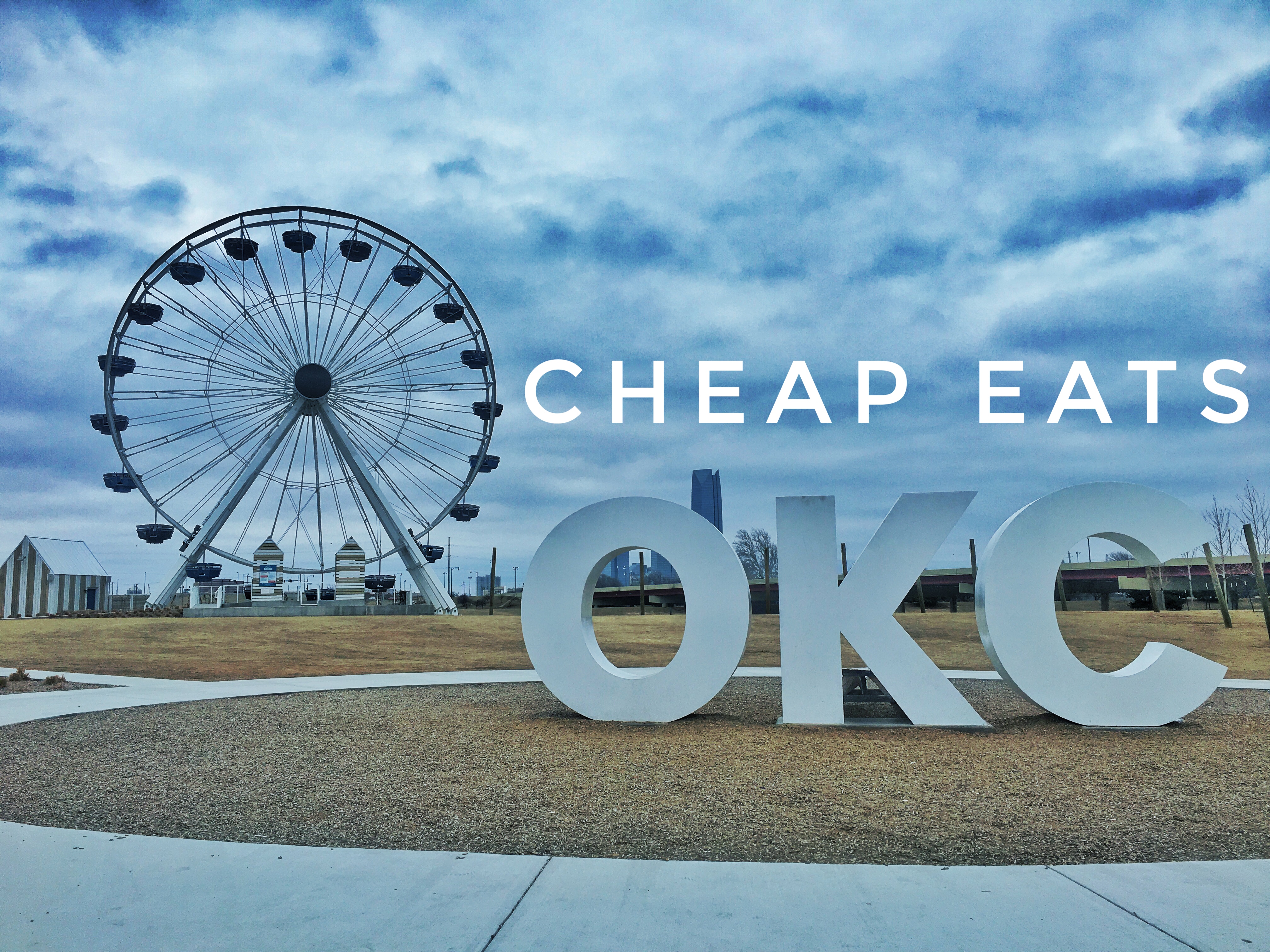 And that is how Cheap Eats Oklahoma City is done! One heck of a restaurant line up that speaks to a new sense of food diversity in America along with a level of cooking that raises the bar yet a few more notches. Not bad for $35 either. I guess the old saying is true: It Khan Be Done!

Until next time Cheap Eaters . . .