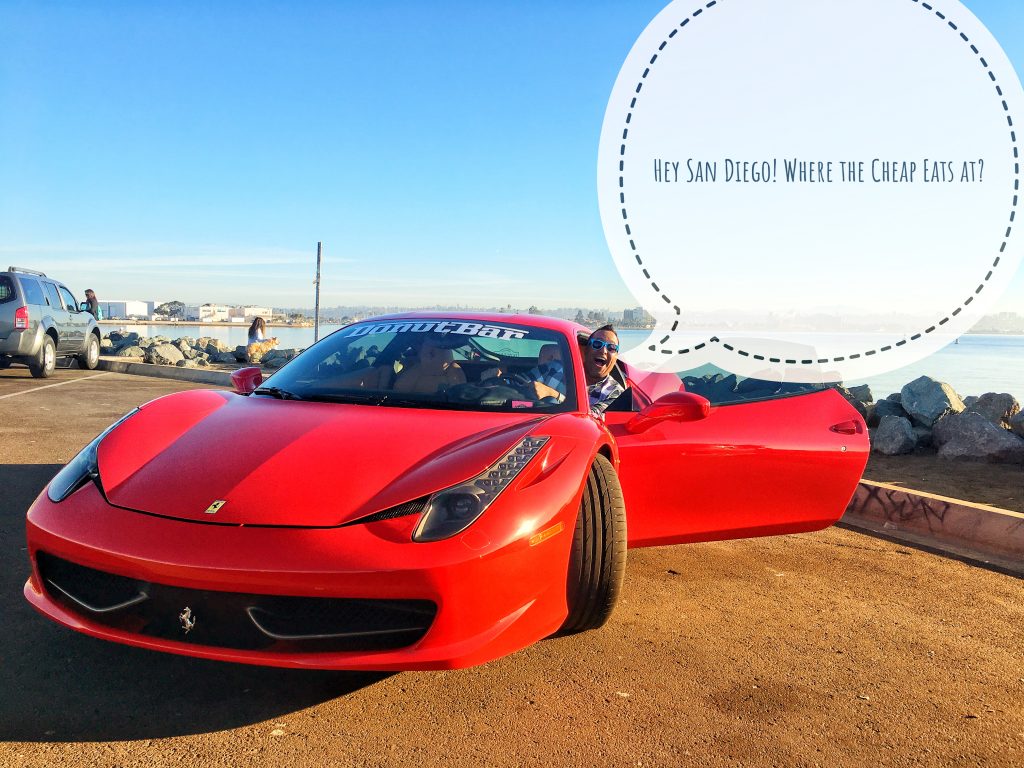 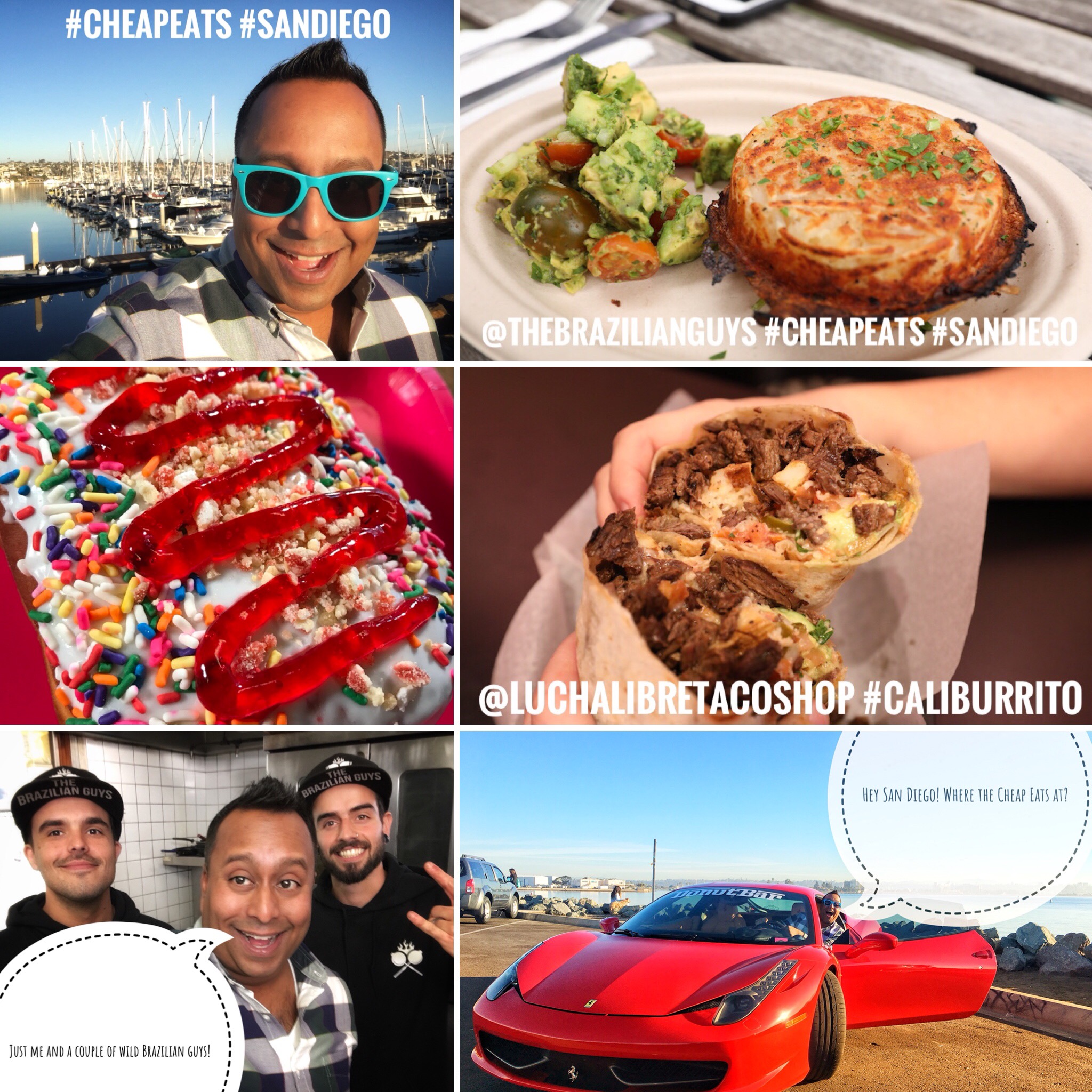 Ahh, San Diego. German for a . . . well, we all know how that line from Anchorman goes, so no need to rehash it on the interwebs for the millionth time. Instead I’ll just jump into the Cheap Eats scene in San Diego while fondly looking back at one of the most fun episodes of Cheap Eats we have ever done. Yes there were Ferrari rides that included doing donuts with a donut making guru. Oh and this was the episode where I found my all time favorite burrito that came with a serious helping of steak, shrimp, french fries and Mexican wrestlers. And that is just the half of it . . . so join me for a second serving of Cheap Eats San Diego! 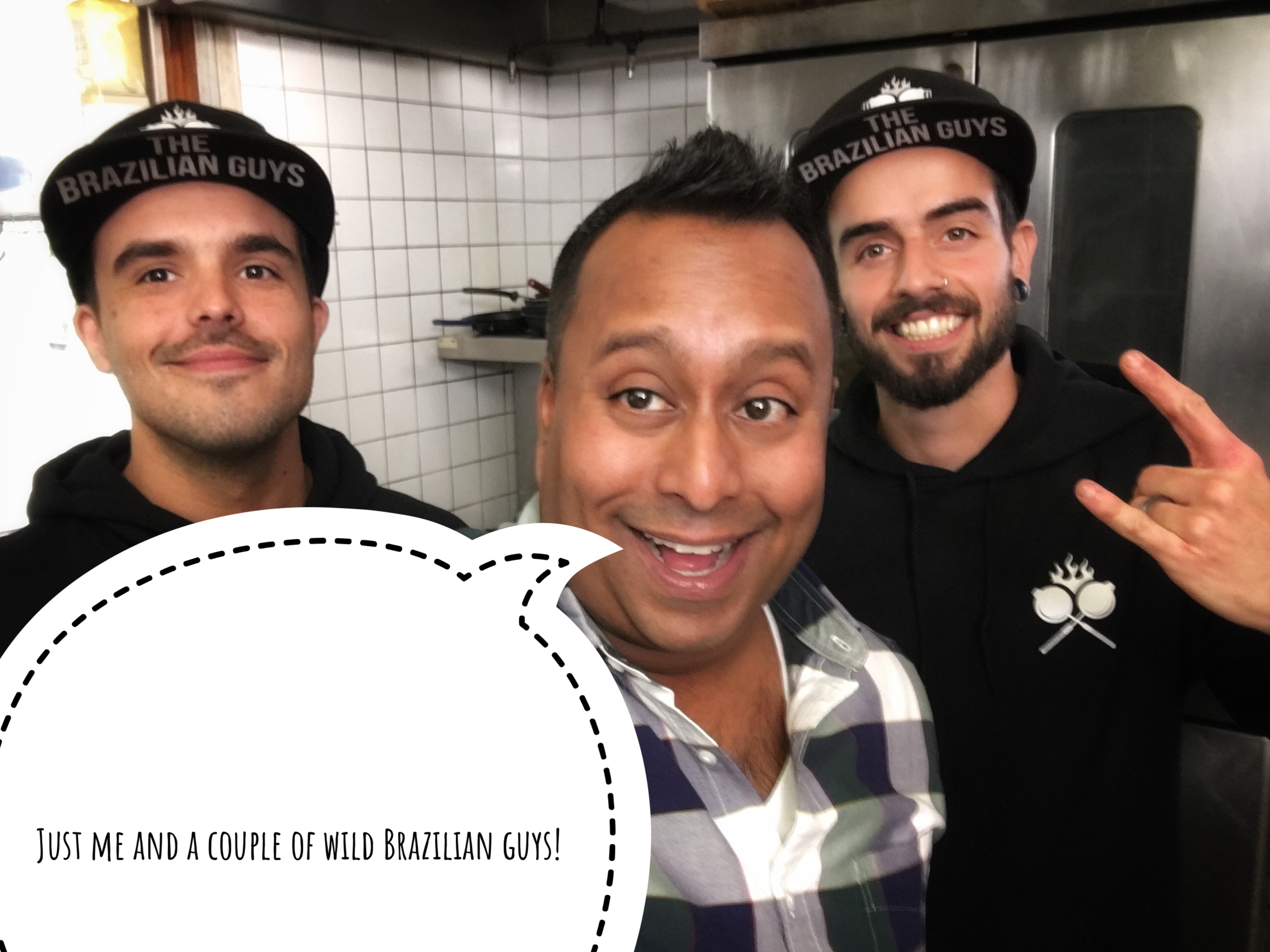 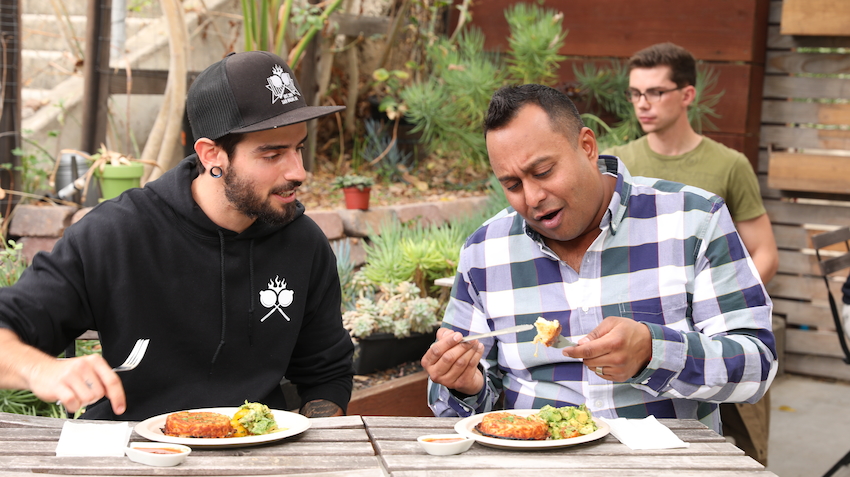 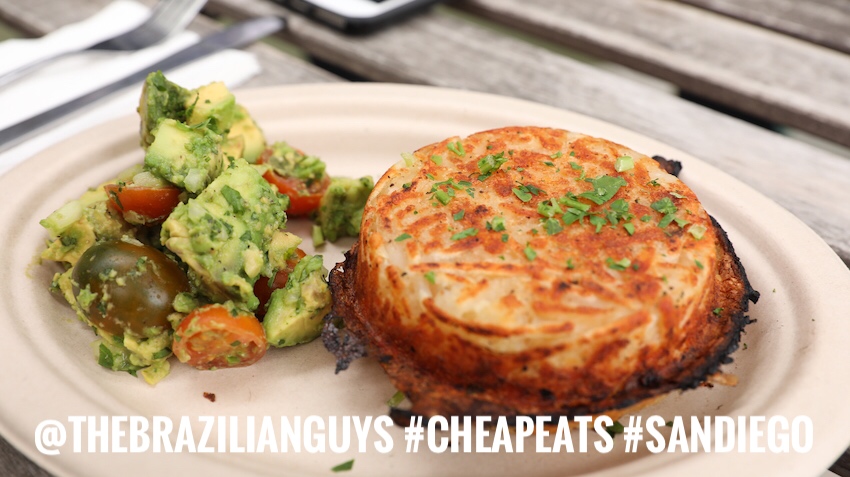 The Vitals:
the spot: The Brazilian Guys 3085 Reynard Way, San Diego CA 92130
the eats: Stuffed Hashbrowns with avocado, egg and cheese
the bucks: $8
the full nelson: because there is more to Brazilian cooking than just churrasco

I just adore hash browns. I like ’em at diners and I like ’em done up a lil fancy, like the ones we featured in Cheap Eats Birmingham. I even have a soft spot for the frozen rectangles you can get at Golden Arches. But Brazilian hash browns? Those are just next level. Essentially a stuffed potato pancake, Brazilian hash browns start off with the familiar shredded potatoes that get placed in cast iron skillets and then get stuffed with a number of different ingredients ranging from a Brazilian cured beef called “seco” to classic California avocados.  The Brazilian Guys employ special personal sized cast iron skillets ensuring that each hash brown dish is cooked to order. Because two pans are used, expect your taters to be golden on both sides. Now I love Brazilian churrasco, aka hunks of meat cooked on large skewers, but there is more to Brazilian cuisine than just meat. Like potatoes and cheese. And ucurum which is essentially annato seeds turned into an oil which contribute to the color of the potatoes when they get griddled in the cast iron pans. And salsa. The Brazilian guys do a “Brazilian salsa” that is similar to pico de gallo but also adds herbs like oregano and thyme, along with a secret ingredients the fellas declined to share. But I let that go because this dish was just so hearty and bursting with bright flavors. As tempting as it would be to go for the carne asada or the carne seco(dry cured beef), I was stoked to start my day in San Diego, meat free, with these hash browns for only $8. And I didn’t miss the meat for a second. How many times have you said that at a Brazilian restaurant? By the way, Ricardo Mendes and Camilo Quadros are even cooler than they look so best get yourself to see the Brazilian Guys when you’re in SD, I know I would. Because I did. And you best I know I’ll be getting back there soon. 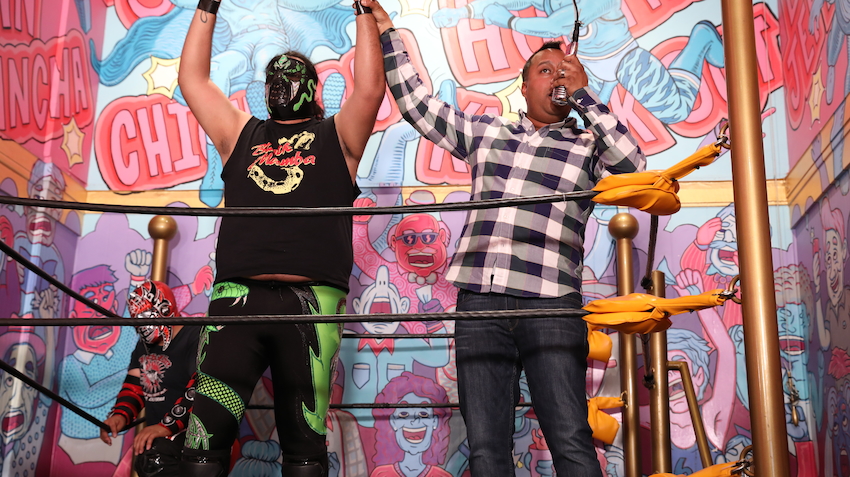 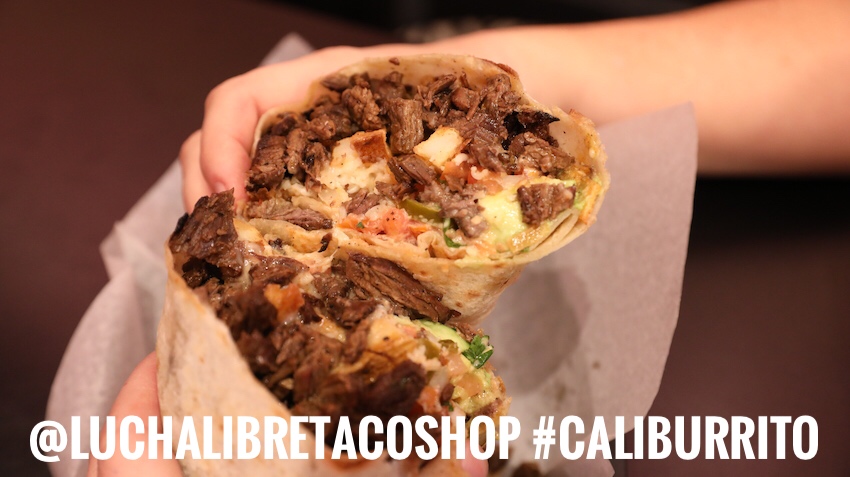 The Vitals:
the spot: Lucha Libre Taco Shop 3016 University Ave San Diego CA 92104
the eats: Surfin Cali Burrito
the bucks: $9.50 or $8.07 with the Lucha mask discount!
the full nelson: Why nobody does burritos better than San Diego

I’m making a big statement here: nobody does burritos better than San Diego. And even crazier is that I just went on a San Francisco burrito binge in the famed Mission District like a week ago(blog post coming soon). Now I’m not gonna get into a comparison of burrito styles right now. I think that if you like rice in your burrito, then you like rice in your burrito and that’s that. Or if you’re of the puro carne school(that’s “all meat” for you gringos out there)  – hey I hear ya, I feel ya, I understand. What I will do is get into the taco vs burrito debate and the pursuit of authentic Mexican vs American Mex. No need to analyze why this is a classic Cheap Eat: the Surfin Cali is one fat burrito stuffed with juicy skirt steak and shrimp for under $10 and it is one of my all time favorite Cheap Eats. Now let’s jump into the taco vs burrito debate first. I love tacos, and I love them more than burritos. Tacos are affordable tapas; the opportunity to sample a menu without breaking the bank. A single taco meal should range anywhere from three to five tacos, essentially creating a poor man’s multiple course meal and still run a tab well under $12, in some places well under $8. Now I love sampling the various fillings at a taco stand because ultimately you find that one(or two or three) filling(s) that absolutely crushes. If I have played my cards right, I might have a little extra saved in the tank and the wallet for one final order: a burrito of that succulent carnitas, beefy carne asada or spicy chorizo to just absolutely slay the Mexican street meal experience. Gluttonous? Perhaps but hey, nothing wrong with having a meal with zero regrets. In the case of Lucha Libre you can’t go wrong with the chicken or carnitas but what absolutely rocks is the pairing of steak and shrimp in a burrito laced with french fries. It is like getting a steakhouse flavor combo drizzled with the zest of Mexican spice via salsa and the bounty of Southern California with chunks of avocado. You can get a mix of meats in a single taco but you can’t squeeze french fries too, that is a burrito only affair making San Diego’s “Cali burrito” an experience no taco can match. Meat and potatoes is as American as it gets which is a great segue into the second topic of discussion: authentic Mex vs American Mex. I’m drawn to Mexican food because of the similar spices found in the cooking of my peoples: the Indian sub continent. Us Browns are down for the cumin and coriander and Browns ain’t scared of a little heat, or a lot of heat, however regrettable that may become later on. Which is why I love eating Mexican food in Mexico and from folks who are cooking for an audience that like strong flavors and traditional ingredients. But food doesn’t exist in a static state. Food is meant to evolve. And frankly there is plenty of room on my table for different interpretations if the taste is there. When it comes to Authentic Mex vs American Mex, I can’t say I love sour cream because it can water down the flavor when used excessively. I like my salsas spicy too – no need to deseed peppers in my book. But I also love me plenty of meat, and stuffing a burrito with steak and shrimp, while clearly a nod to the American palate, is pretty damn awesome. Adding french fries might seem like a gringo move but french fries are delicious and I tip my cap to Lucha for adding just enough to keep them from wading into the filler territory like a third string Mission burrito gets with the rice. For the same reasons that we keep salsa in the American pantry and toss a little on eggs at breakfast like it was Tabasco is the same reason I like fries in my burrito: it just tastes good. One does not have to live within borders or eat within them either. No, the Surfin Cali burrito aint authentic Mexican. But it is authentic San Diego. And authentic San Diego is pretty damn delicious. 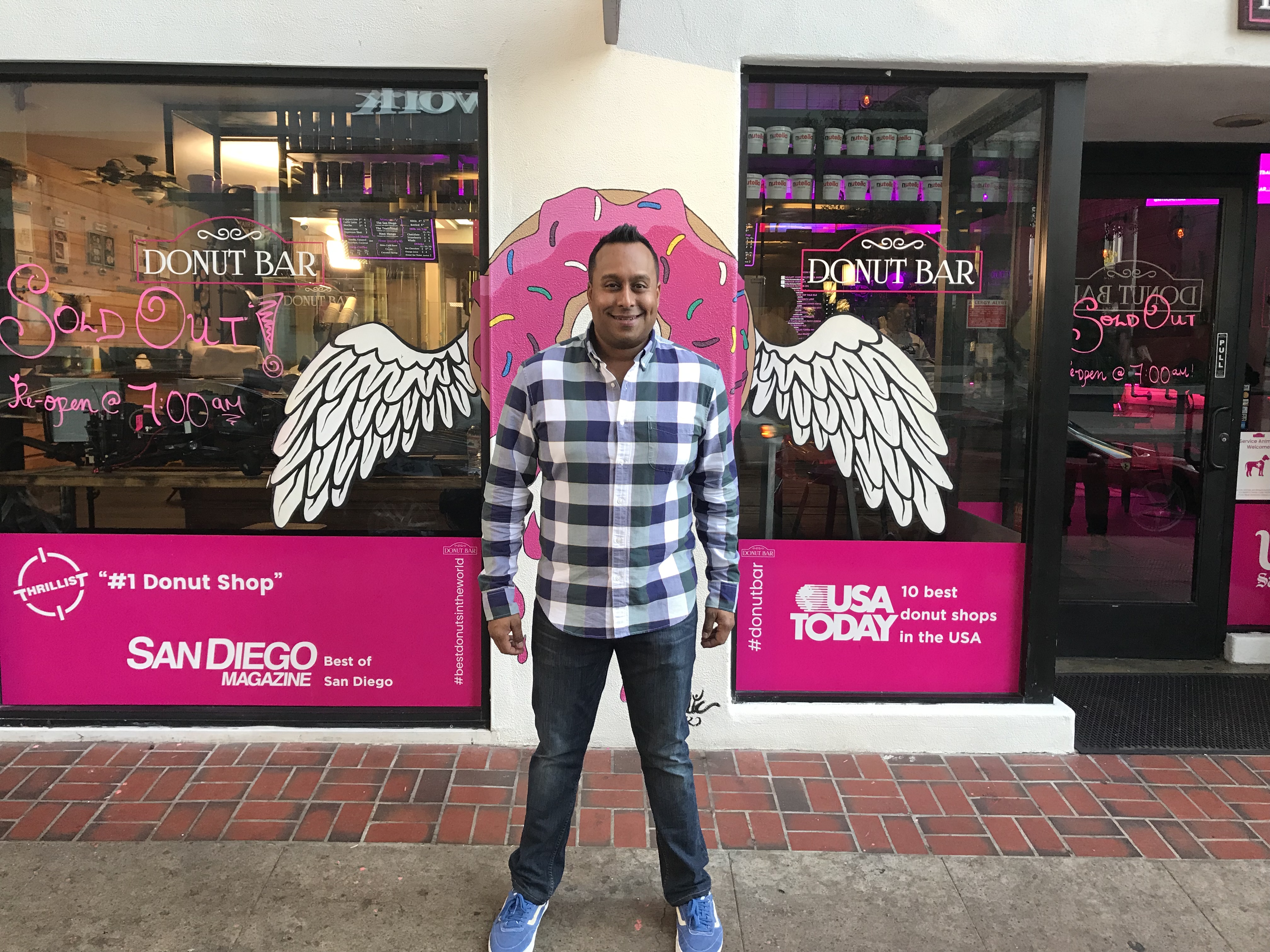 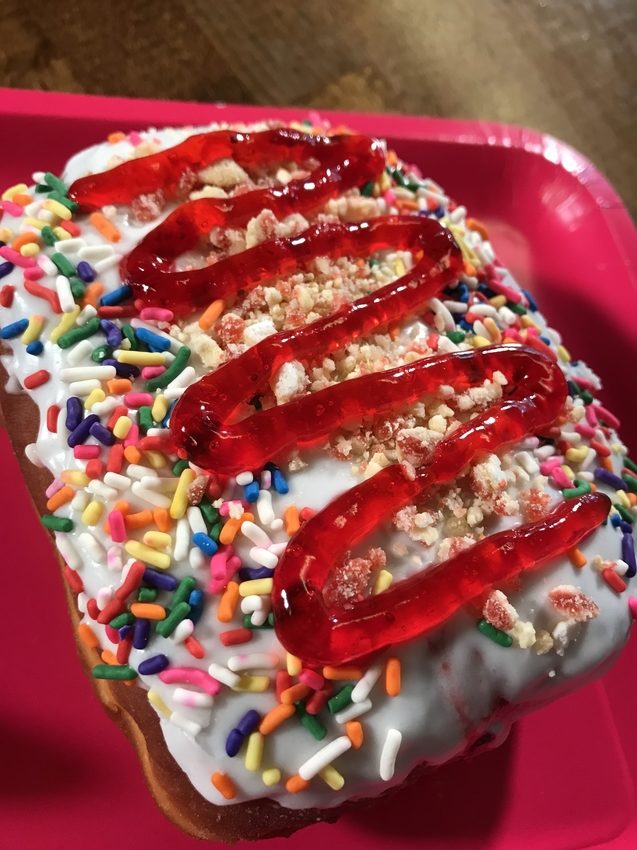 There is no shortage of donuts that will peak your interest at Donut Bar. From French Toast to a ham and swiss studded Monte Cristo, almost anything is fair game to be transformed into a donut at the Donut Bar. Which makes the Big Poppa Tart really a sort donut advancement inevitability. Chances are if you love pop tarts, you probably love donuts too. Which makes the idea of stuffing a pop tart into a donut a sort of snack evolution that Charles Darwin himself may have hypothesized if they had a Donut Bar in the Galapagos islands back in the day. Building a donut to embrace an entire pop tart pretty much means this snack is gonna be sized up for a full on meal but what literally tips the Cheap Eats scales is the strawberry compote that gets injected in here. Lovers strawberry compote rejoice, cuz you’re getting a Costco sized jelly serving. And for a mere $5, it might be cheaper than Costco too. 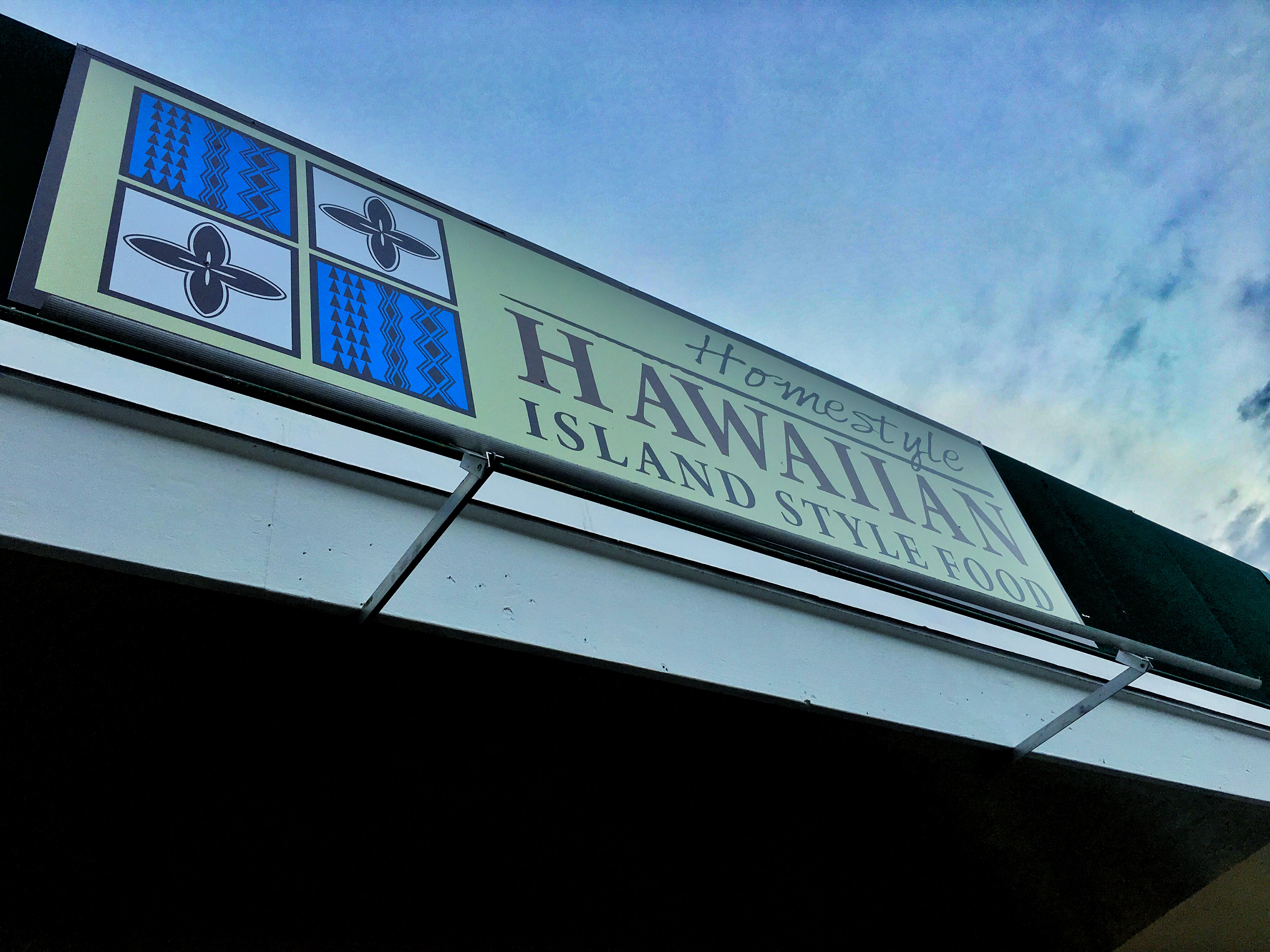 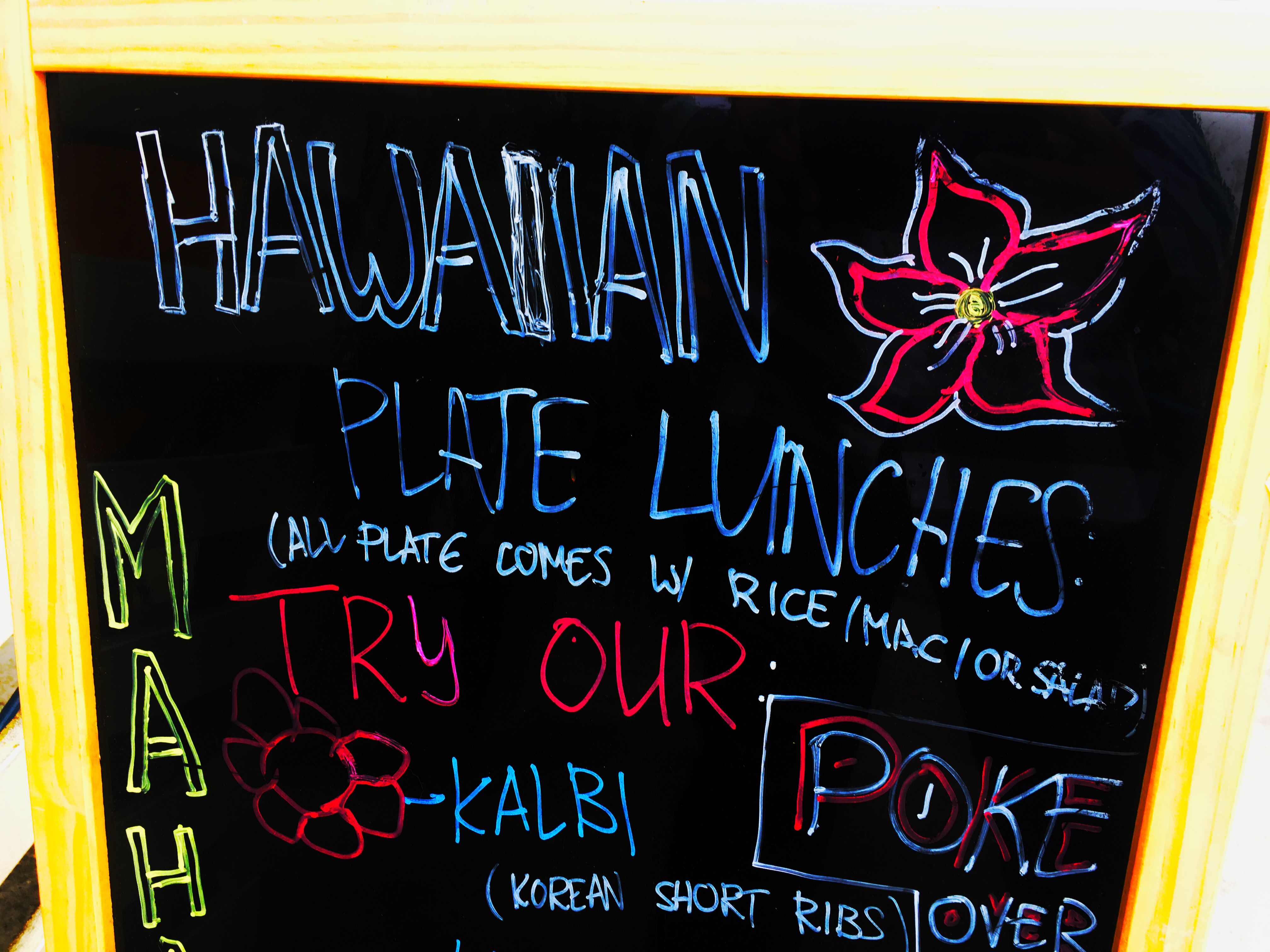 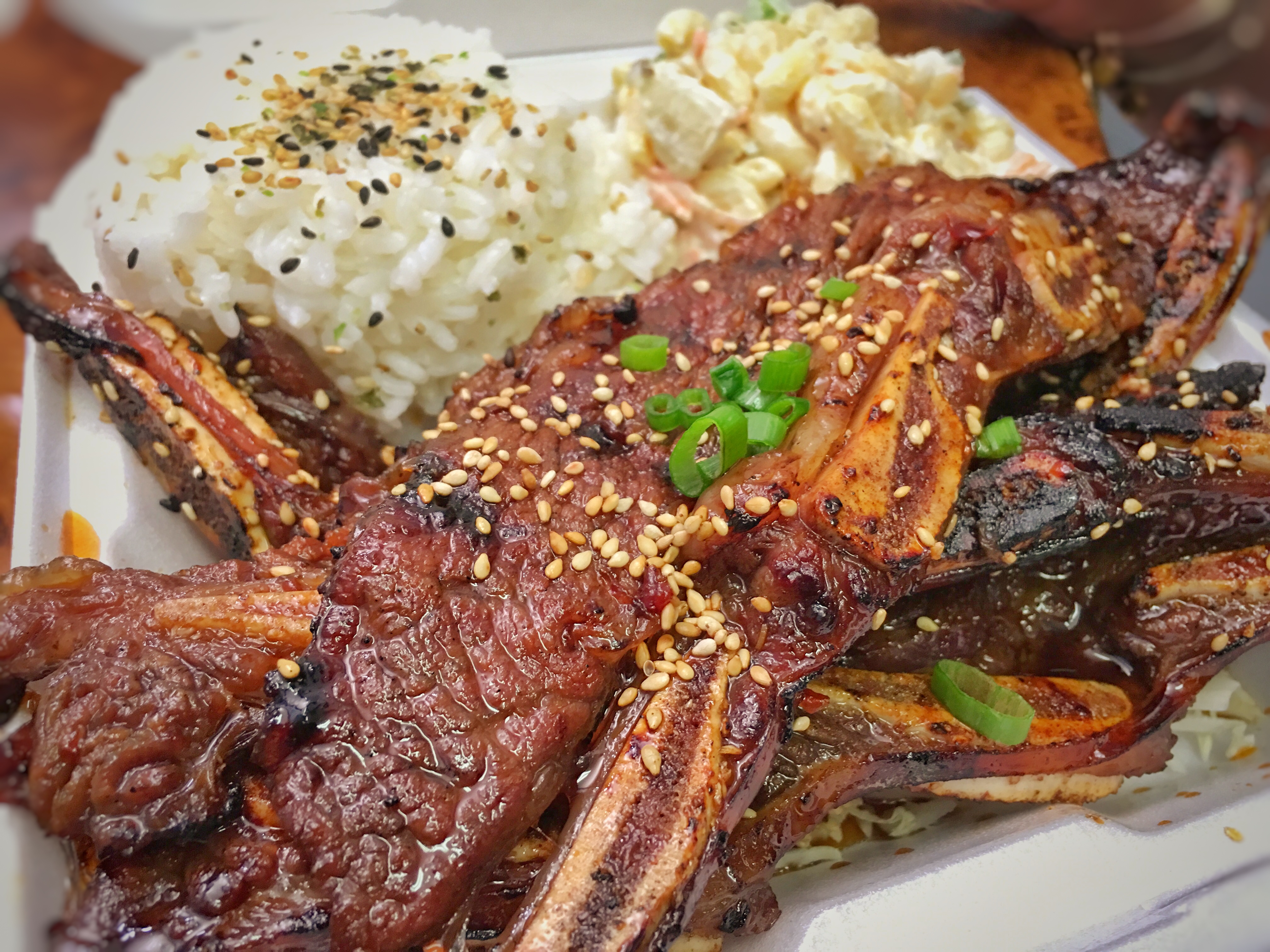 If you have ever had Korean BBQ you know the addictive power of marinated short ribs or as I like to call it: beef candy. Hawaii ain’t exactly Korea but the story goes that the Korean Short rib dish Galbi made its way to Hawaii via laborers who came looking for work and brought their families and culinary traditions in tow, and even got renamed as “Kalbi”. Sweeter than the Korean version, the Kalbi at Homestyle Hawaiian uses USDA choice short ribs cut flanken style which allows for a quick cook. Even though the marinade of soy, sugar, garlic and orange juice(plus a few more secret ingredients) sits for 48 hours, there is still a great chew to the short ribs. Rice with sesame seed plus macaroni salad ensures that you are getting the classic Hawaiian version of Korean Galbi and $12.95 for a hefty plate of sweet n salty beef candy is a welcomed deal in my book. And it’s cheaper than a flight to Hawaii . . . even if you are flying out of San Diego International Airport. 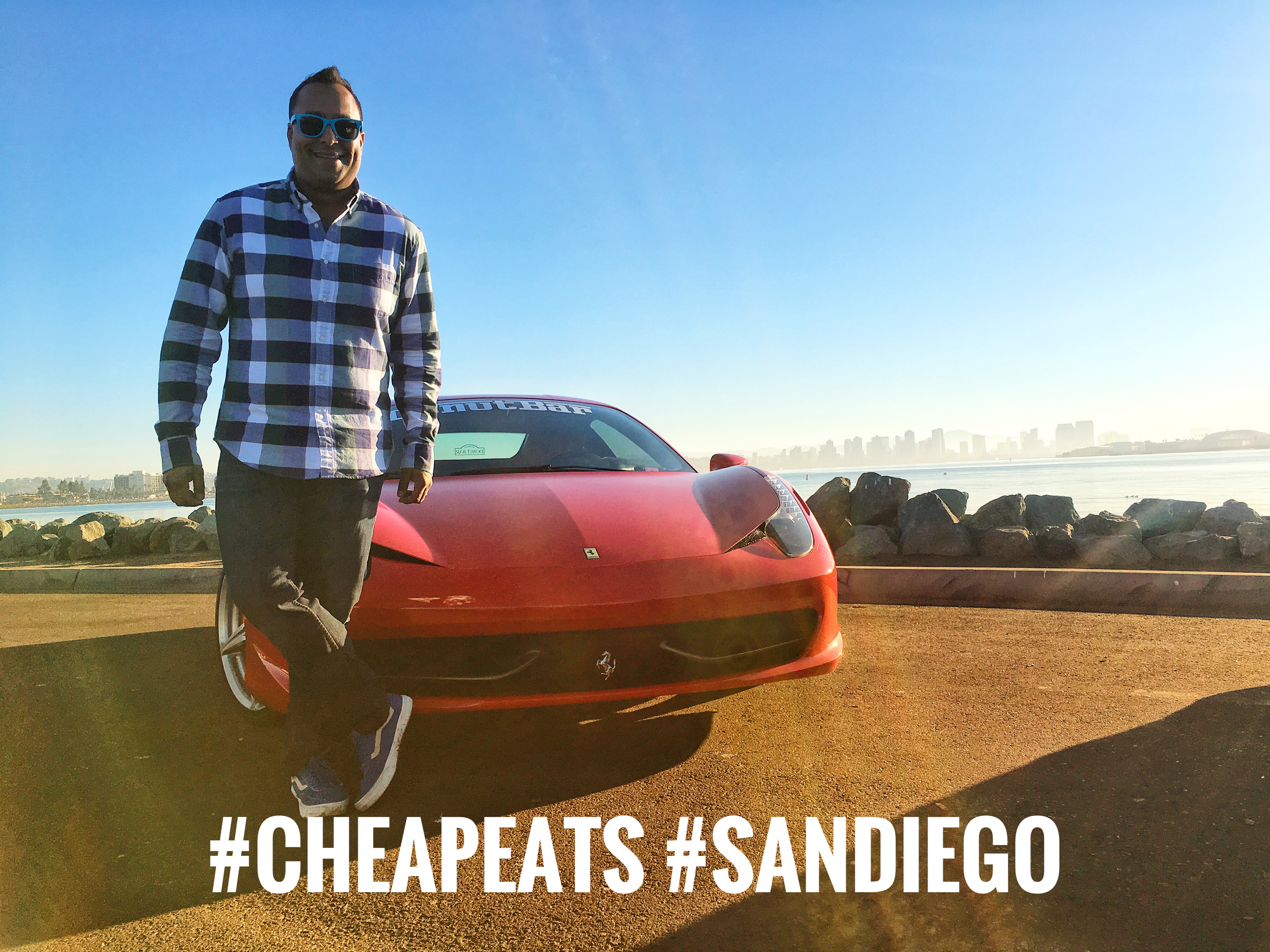 And that is how I rolled with Cheap Eats in San Diego! A baller’s paradise in SoCal for sure and a town where you might want to be saving your money for gassing up the Ferrari but when it comes to eating Cheap and eating well: SD is as chill as a breezy night cruising the coast with the top down. Pro tip as well: if you are down in San Diego, give Tijuana a hard look. The other side of the border has come along way since the troubling times of the mid 2000s and the food, craft beer and wine scene a little further south will impress. Just be careful not bottoming out your 488 GTB on those dirt roads, it’s an expensive tow back to La Jolla.