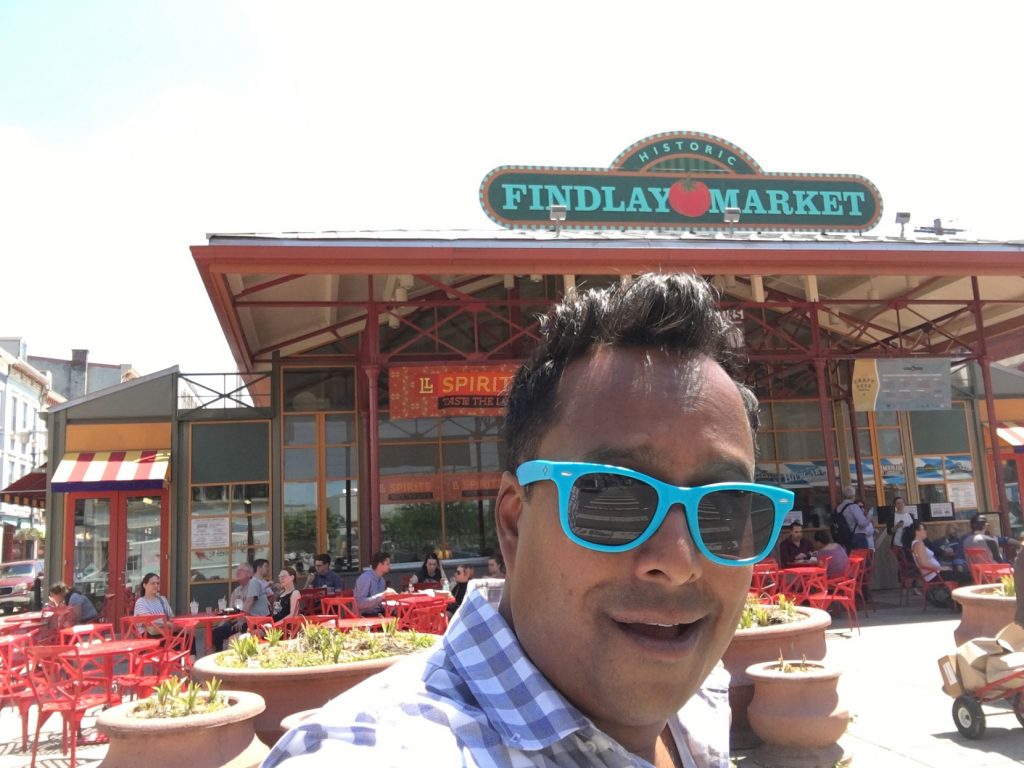 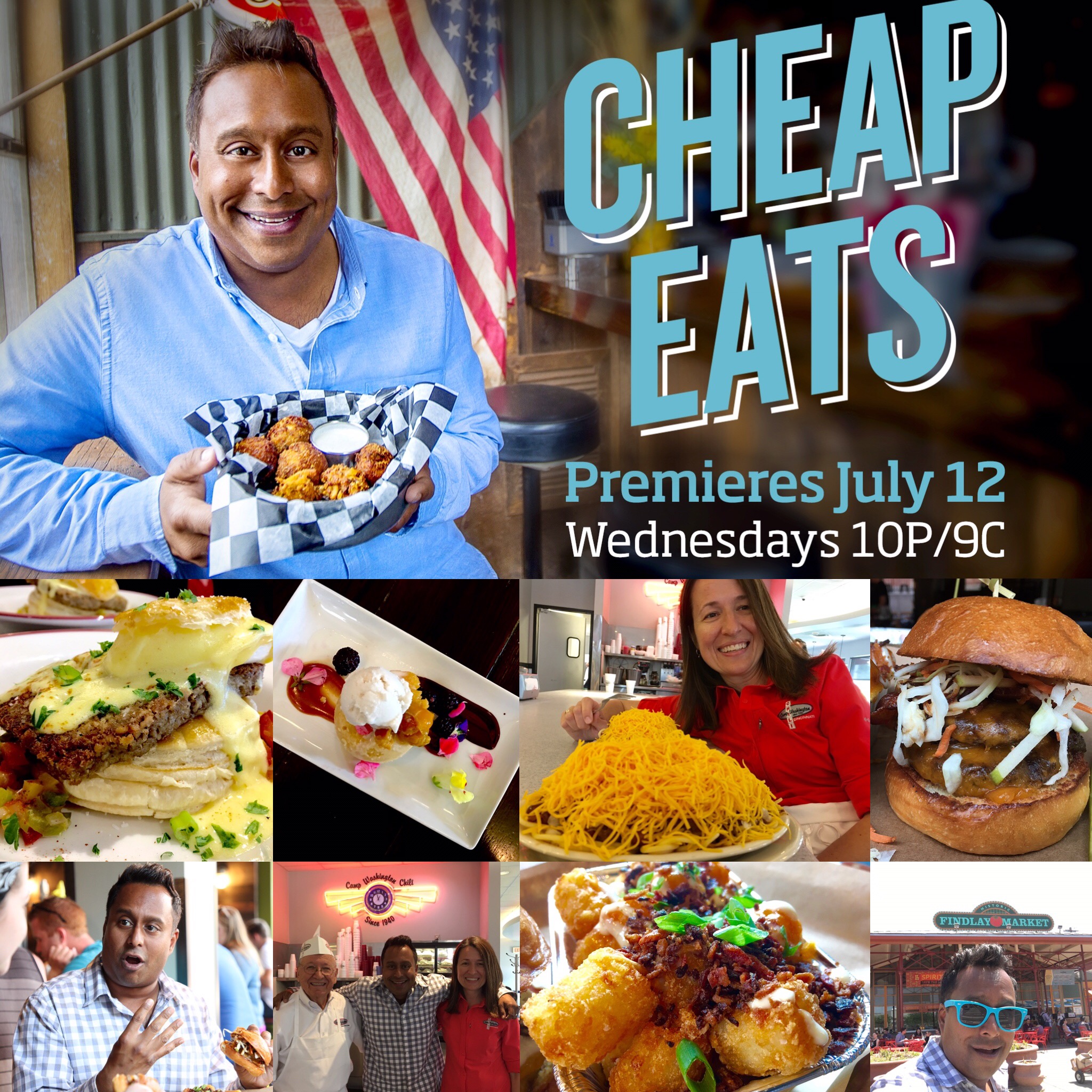 Yup. Cheap Eats went to the ‘Nati. And thanks to my Midwest rearin’, the town almost felt like home, or like a family member you see every summer, a cousin if you will. Just swap out the toasted raviolis for chili on spaghetti noodles, the Cardinals for the Reds and Cincinnati was like my hometown from an alternate universe. But even in an alternate universe, the same Cheap Eats rules apply: $35 to eat the town UP. And that we did, with a mix of local food traditions, some trending burgers and a snack that would look good on an episode of Mind of a Chef. But my mind, and yours, is clearly on Cheap Eats so let’s dig deep into the ‘Nati!! 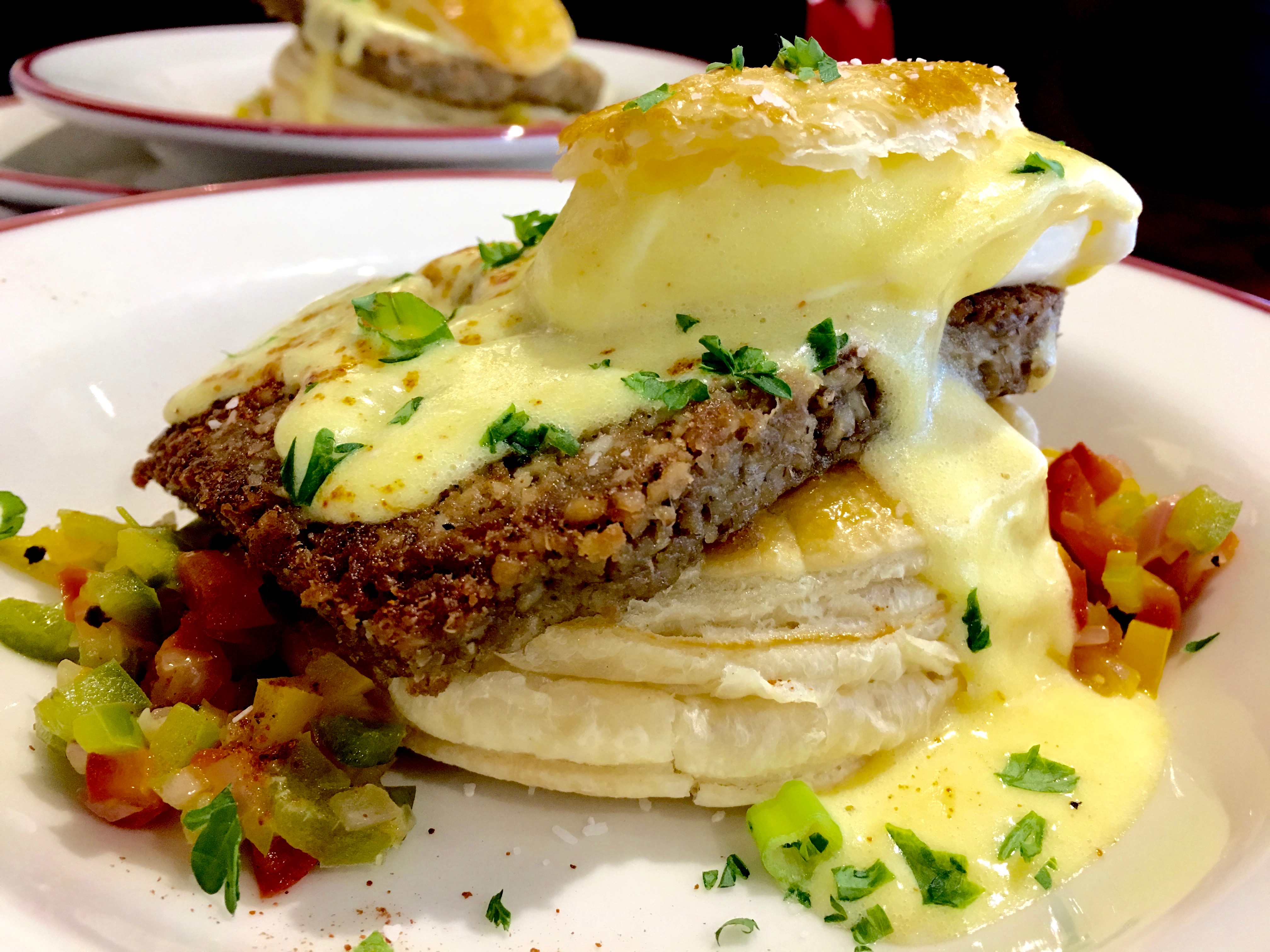 The Vitals:
the spot: French Crust Bistro and Cafe 1801 Elm st Cincinnati OH 45202
the eats: Puff Pastry with local goetta
the bucks: $9.50
the full nelson: a local sausage dressed in a perfect hollandaise? for goetta ’bout it

If you need proof as to why French food will always be important and relevant, for all time, just dip your fork into a perfect hollandaise sauce. There can be no better sauce for breakfast. Ever. While French restaurants might be in decline compared to years passed, some, when run well, endure the trends of pricey sushi joints, tattooed chefs obsessing over smoked brisket and $5 cupcake conglomerates. Jean Robert De Cavel is the man behind a well run, well actually, multiple well run French restaurants in the Cincinnati area, and lucky for us, we could squeeze in his commendable resumé into our Cheap Eats budget. His French Crust Bistro and Cafe illustrates perfectly the old maxim that breakfast is indeed the most important meal of the day. In the Cheap Eats world, hollandaise means brunch rather than breakfast and the Puff Pastry with local Goetta was just that. Poached egg with hollandaise on a puff pastry should be obvious enough at any French restaurant serving breakfast, but remember we are also in Cincinnati. And that means Goetta. To the uninitiated, Goetta is a sausage of German origin that has become a Cincinnati staple thanks to the influx of German immigrants from the 19th century. Similar to scrapple, grains(in this case pin oats), are combined with pork along with various spices and herbs to make a sausage that not surprisingly was a favorite of German peasants. All I can say is you gotta try it. If you dig a pork patty for breakfast, you will love the nuanced flavors that come with bay leaf and rosemary that season Goetta. Then top it off with a poached egg and perfect hollandaise plus a puff pastry to soak up all that goodness? You will walk out of French Crust saying “fo-goetta-bout it”. Look you knew I had to. Also special props go to Chef Carla Heiert who made this fine dish for me. This young lady grew up hunting and is no stranger to breaking down whole animals so you know she is gonna be particular about the Goetta she sources. And it was $9.50 – a heck of a way to start my Cheap Eats day. 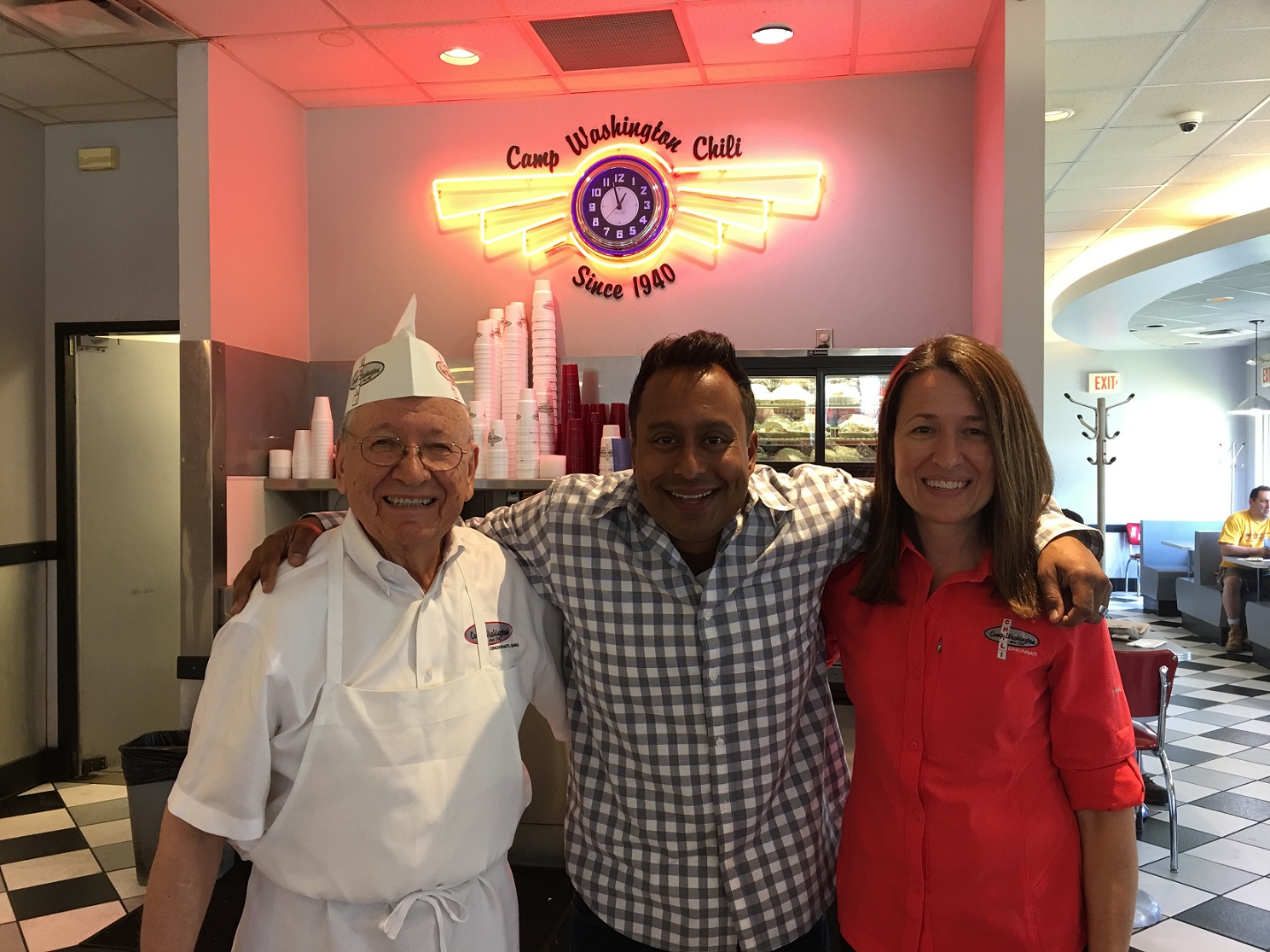 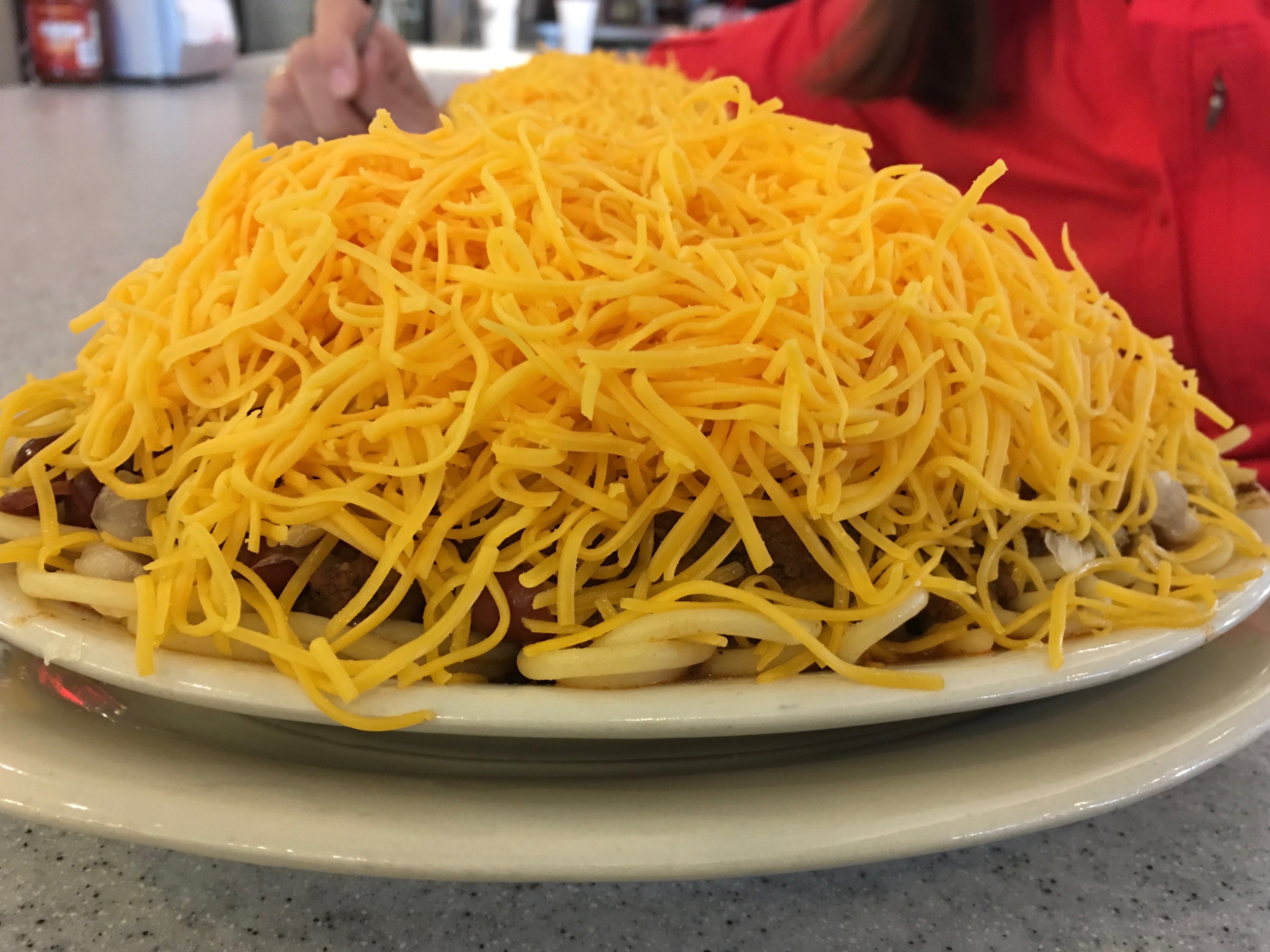 Chili 3-way, 4-way or 5-way is exactly what I love about Cheap Eats: a locally celebrated food tradition that is affordable, exotic to the out of towner and delicious enough to make you root for the Reds (just kidding, I’m Cardinals 4 life). Here is the run down: Cincinnati style chili is ladled over spaghetti noodles and topped with cheddar cheese – that is your 3 way. Add onions or beans and you’re at a 4-way, add both and you have a Chili 5-way my friends. Not nearly as kinky as it sounds right? The most important element to consider here is the chili itself. Dubbed “Cincinnati style chili”; the chili is actually the product of Greek immigrants who essentially converted a Mediterranean meat sauce called pastitsio into what is considered chili around these parts. For the first timer who may only be familiar with “Chili con Carne”, the popular chili version from Texas, expect a far more aromatic experience thanks to cinnamon, all spice, clove, nutmeg, chili powder and bay leaf among others. Because this chili is more a meat sauce, its natural to serve over spaghetti noodles. However any semblance of Mediterranean cuisine soon goes out the window once a bright layer of cheddar cheese is added to the plate. Me being me, I went for the full monty and added beans and onions. And for a grand total of $6.30 at Camp Washington, I mean why not? Now I mentioned that Cincy was a familiar town to because I grew up in the Midwest, specifically St. Louis; where my beloved local fast food chain known as Steak ‘n Shake offered a chili mac that was similar to the Cincinnati chili way system. Camp Washington’s is infinitely better. Winner of a James Beard award in 2000, Camp Washington is steeped in tradition as it is accolades. Founded in 1940, the same family still runs Camp Washington to this very day. Which is exactly why the prices are low, the blue color clientele remain faithful and the kitchen churns out 500-600 plates of chili 3,4 and 5 way a day. Camp Washington is not only Cincinnati classic, it is a Cheap Eats classic too. 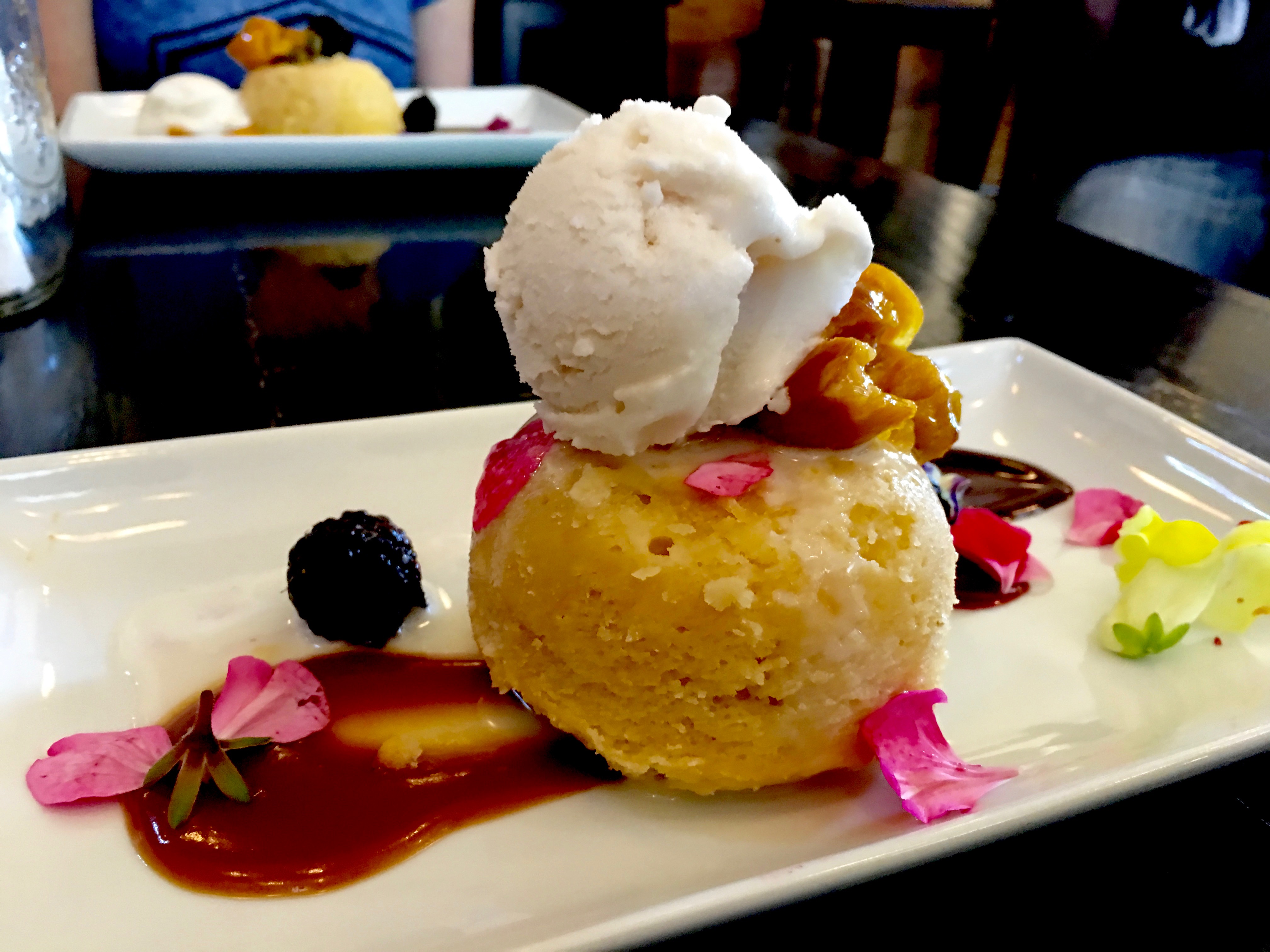 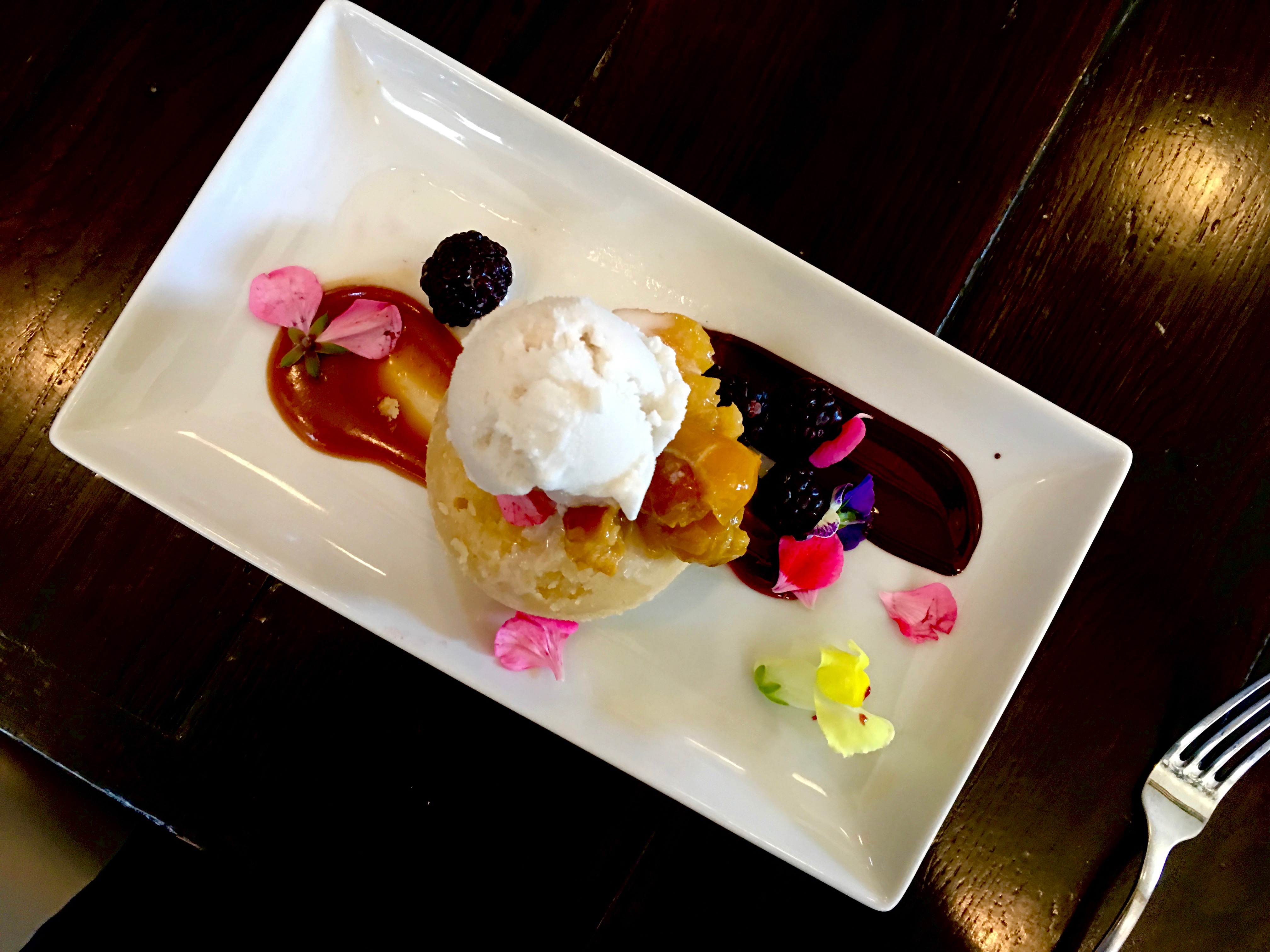 The Vitals:
the spot: The Littlefield 3934 Spring Grove Ave Cincinnati OH 45223
the eats: Lemon Ricotta Cake
the bucks: $6
the full nelson: one of the most complex and magnificent desserts Cheap Eats has ever countered

The Littlefield is my kinda restaurant. If I lived in Cincy, I would be a fixture at the bar. And what a bar. They like the bourbon and so does your Cheap Eats daddy. When we shot here, the crowds for Sunday Brunch spoke volumes as did the head turning entrées that I would would want to see at dusk as well. But we came here for snack on a budget. What we got was by far the most complex tasting dessert Cheap Eats has come across. On paper, Lemon Ricotta Cake conjures up the notion of a rich creamy cake with a citric punch of lemon. What you don’t know is that the cake’s important and uncredited co star are peaches that are poached in honey, cardamom, vanilla, salt and water. You also don’t know that the poaching liquid is reserved for an in house coconut sorbet that tops the cake; another uncredited star I might add. The cardamom hints that this dessert will taste like chai but Chef Shoshannah Hafner’s deft hand had me tasting memories of Indian desserts with infinitely better execution in texture and subtlety. That sound complex enough for ya? And it was $6 bucks. Boom. 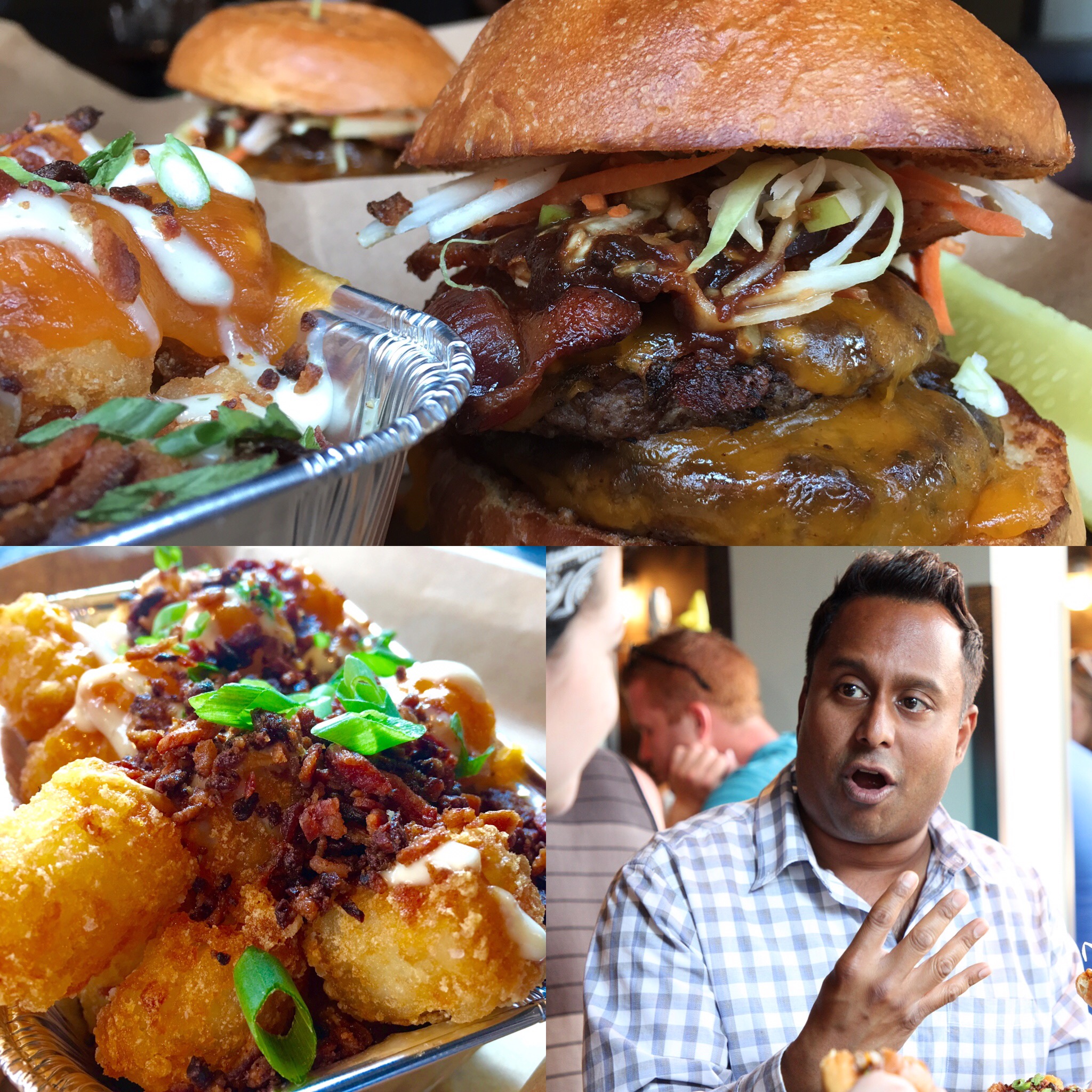 The Vitals:
the spot: Nation Kitchen and Bar 1200 Broadway Cincinnati OH 45202
the eats: Whiskey Bacon Burger with side car of tots
the bucks: $14

Now I gotta say, in the early days of Bang for your Burger Buck, if I stepped into a place like Nation Kitchen and Bar and saw a burger like the Whiskey Bacon Burger for $10, I would have stopped right there. I mean, two patties weighing in at 6 ounces plus bacon screams to me “you. will. be. full”. But these are the Cheap Eats days, where the bigger picture means getting the most of my $35, even if it means breaking the budget a bit. And once you try these tater tots, you will gladly drop the $4 bucks too. Loaded with cheddar bacon, green onion and a ranch sauce, picture loaded potato skins with far more crunch. Now back to that burger. Not gonna lie here, Nation cooks their burgers through which I typically accept only in very thin patties but the char is legit and texture wise it plays well with the crisp bacon and the crunch of the slaw. But what keeps you coming back, bite after bite is the Nation’s homemade barbecue sauce which really kicks it up a notch with bourbon, liquid smoke and sriracha. Nation Kitchen and Bar is essentially a gastro pub which means there is a chef here with a serious food program tailored to keep everyone from guys here to watch the game, to office coworkers on a Happy Hour tear, to hungry TV hosts, pretty darn well fed. Her name is Kayla Robinson, and believe me when I say she can hang with her boys. I mean, she puts whiskey and sriracha in her barbecue sauce. Boom.

And that was the ‘Nati folks. One heck of a Midwest food town. A fine fix of local food tradition, celebrated chefs and trending eats. I may have broken my budget in Queen City but ladies have a way of tempting guys like me to open up my wallet. And after four meals like that, let’s just say this lady earned her crown. Heck, I kinda paid for it. You will too.

2 responses to “Cincinnati in Requiem”