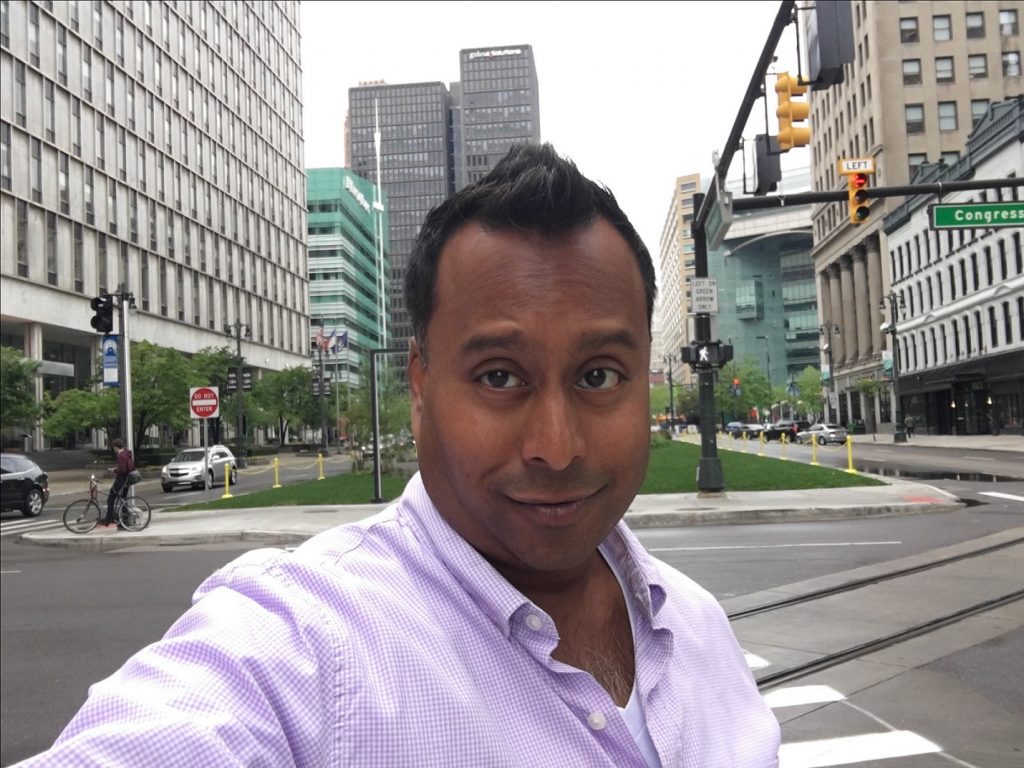 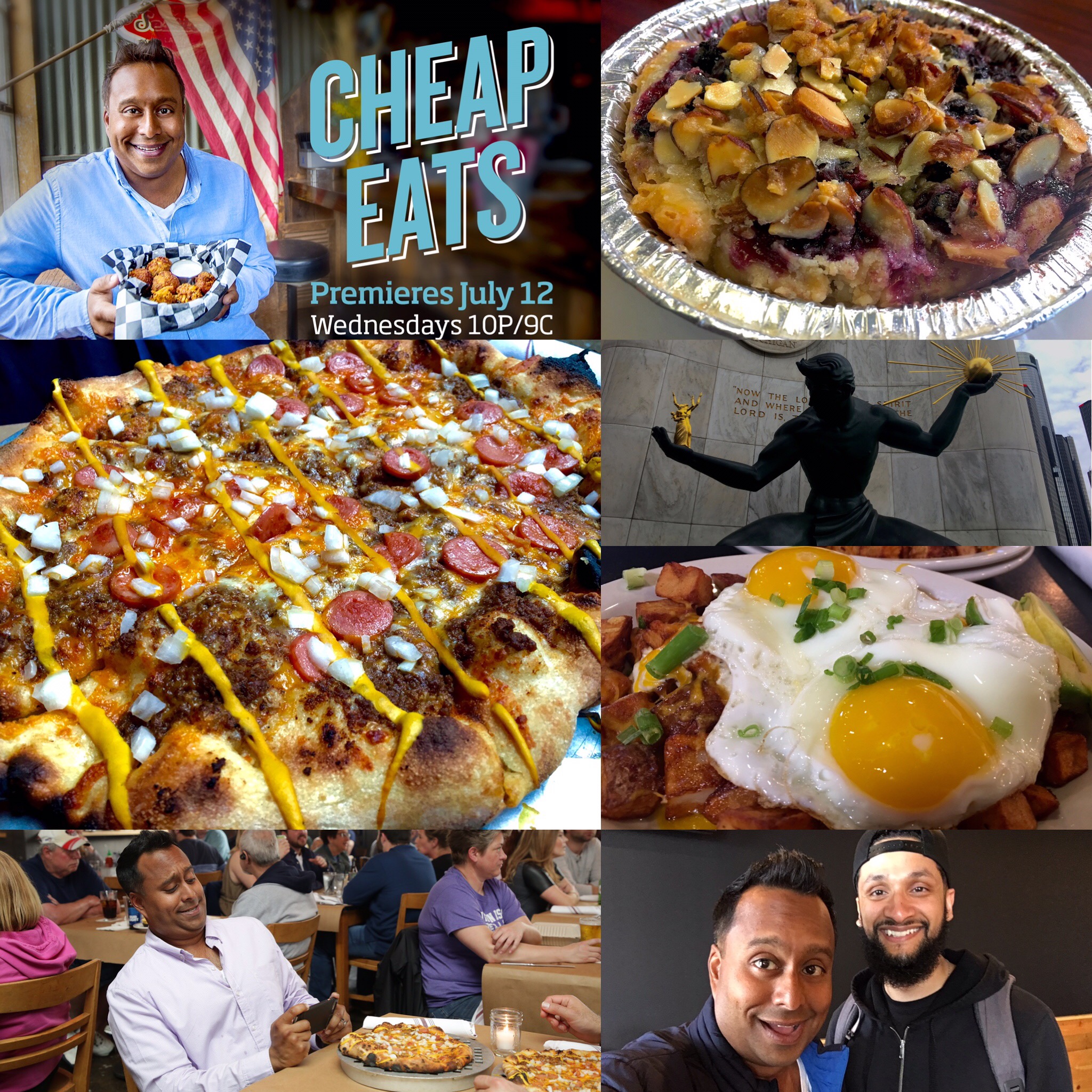 Motor City. Motown. You’re gonna find 8 mile here plus a few more miles. Detroit can and should conjure up some strong images, dare I say preconceived notions. Well, all I can tell you is what I saw and what I ate: a diverse American metropolis that loves their food, thereby supporting the communities behind it. There I go again, getting kinda PBS on y’all when I could just say that you could eat a week’s worth of shawarma and Coney Island dogs here and walk away satisfied. And yes I took it there and went a little deeper so on that note let’s take a BIG bite out of Detroit Michigan!! 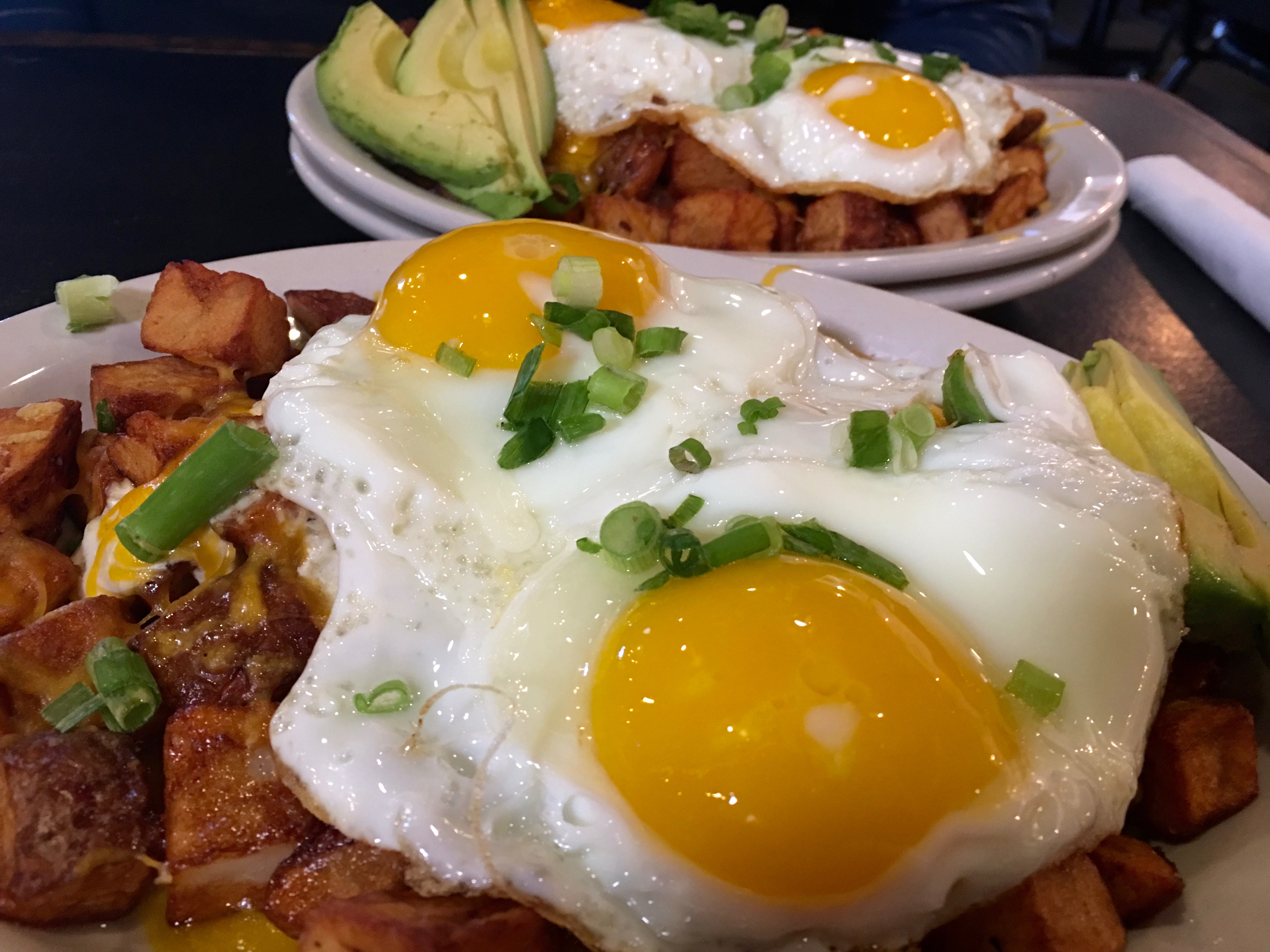 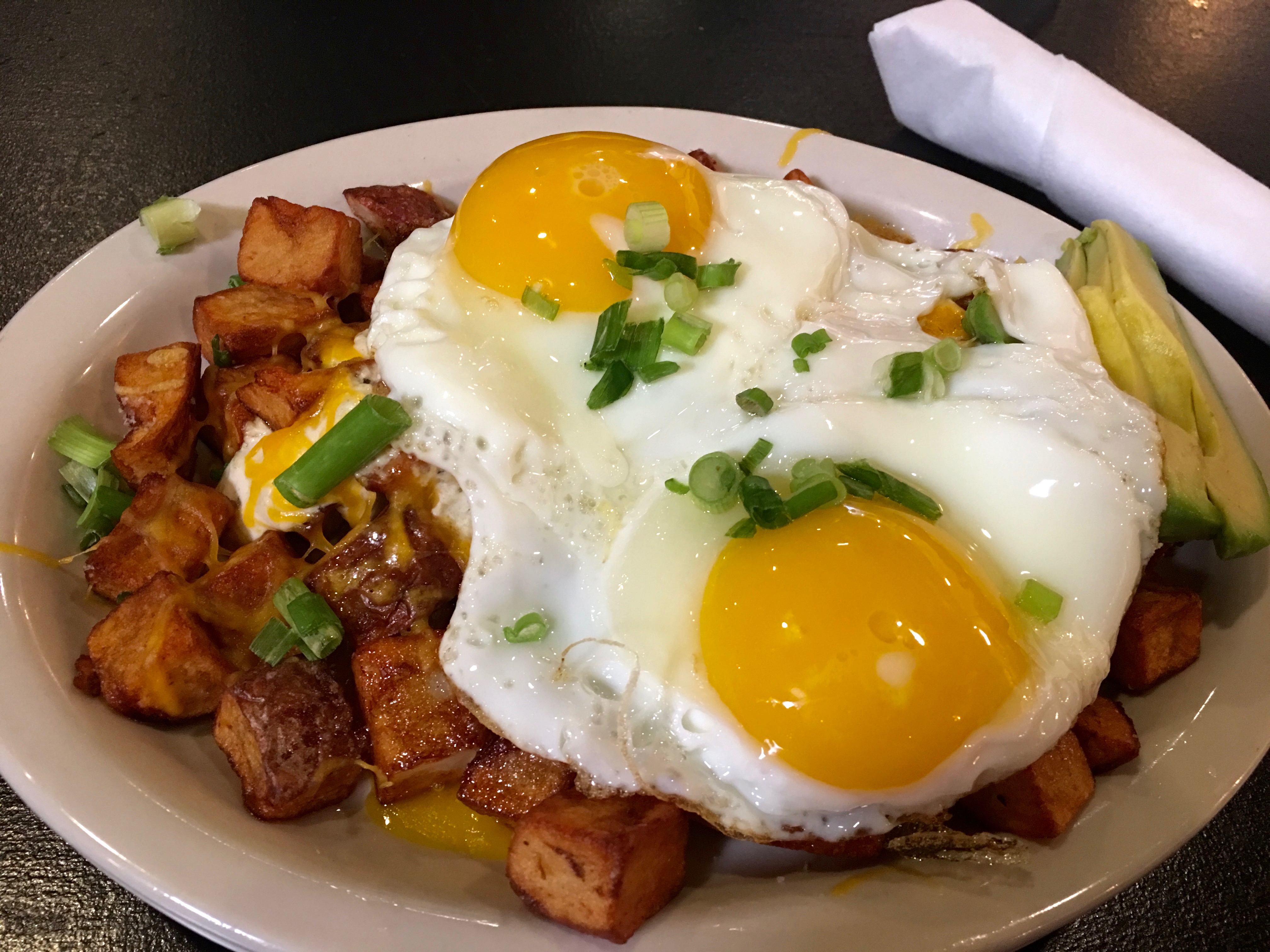 The Vitals:
the spot: Bobcat Bonnie’s 1800 Michigan Ave Detroit MI 48216
the eats: Bonnie’s Smothered Breakfast Potatoes
the bucks: $9.50
the full nelson: get a taste of Det-Mex for breakfast

What is Det-Mex you ask? Well, I could be up front about it and say it means Detroit Mexican but what its really about is how Mexican food has become as American as Apple Pie. In 2017 I think it is safe to say just about everybody in America is crazy for tacos and keeps salsa stocked in the pantry or fridge. But that doesn’t exactly mean American kitchens are firing up molé on a Friday night. It does mean that Mexican food, all over the country has become thoroughly Americanized. Which brings me to the Smothered Potatoes at Bobcat Bonnie’s; a hearty breakfast of country potatoes and eggs cooked to order smothered in a lime verde sour cream sauce. To me sour cream screams Tex- Mex, but I have never had it blended with salsa verde; which frankly makes a lot more sense than just dolloping sour cream on top of a “Mexican” dish. And since we are in Detroit, we can axe the “Tex” and swap in the “Det”. Voilá: Det Mex for breakfast aka Smothered Potatoes for just under $10. New American Mexican food genre plus a Cheap Eats breakfast. Not a bad way to start, Motor City, not bad at all. 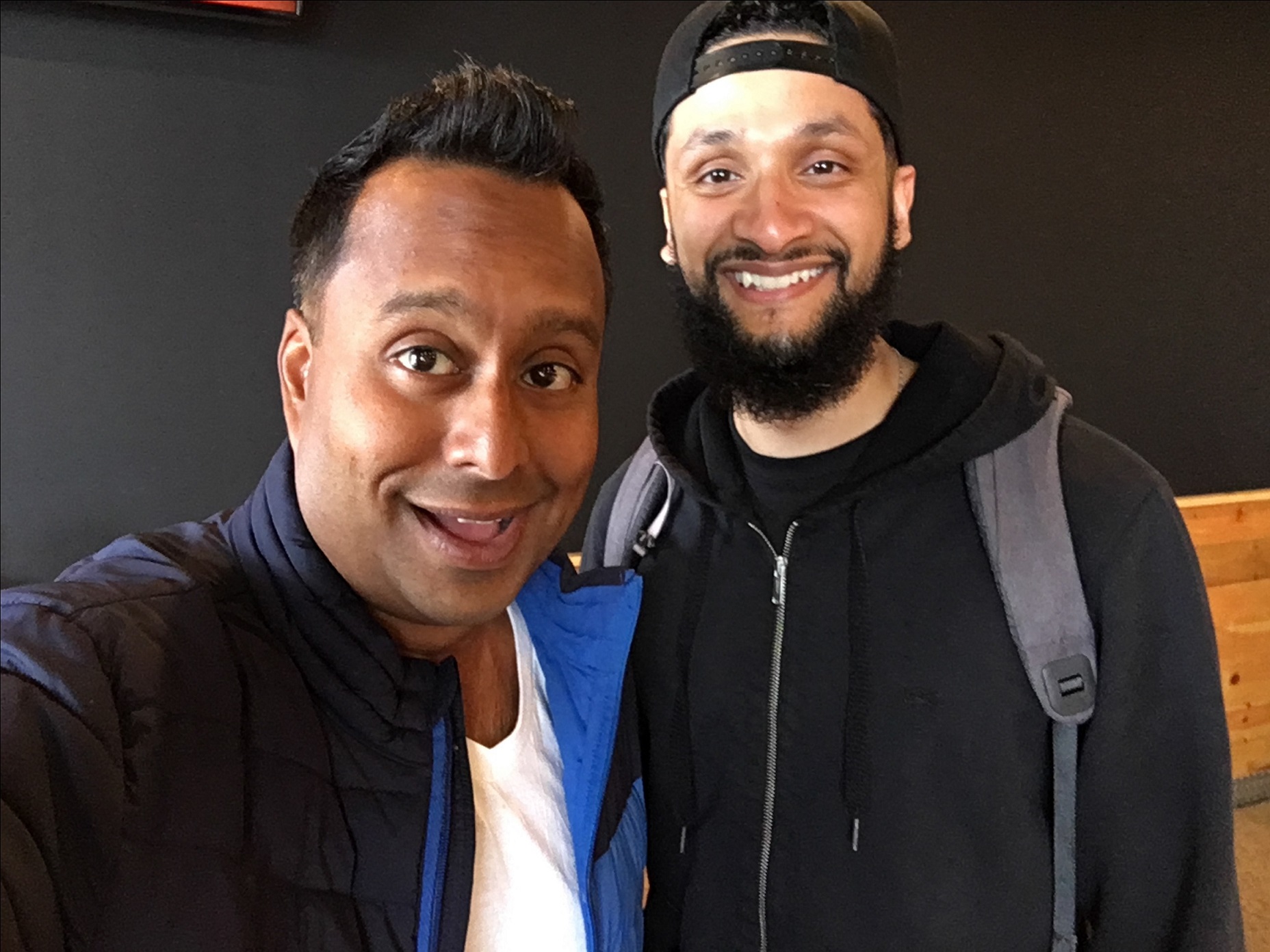 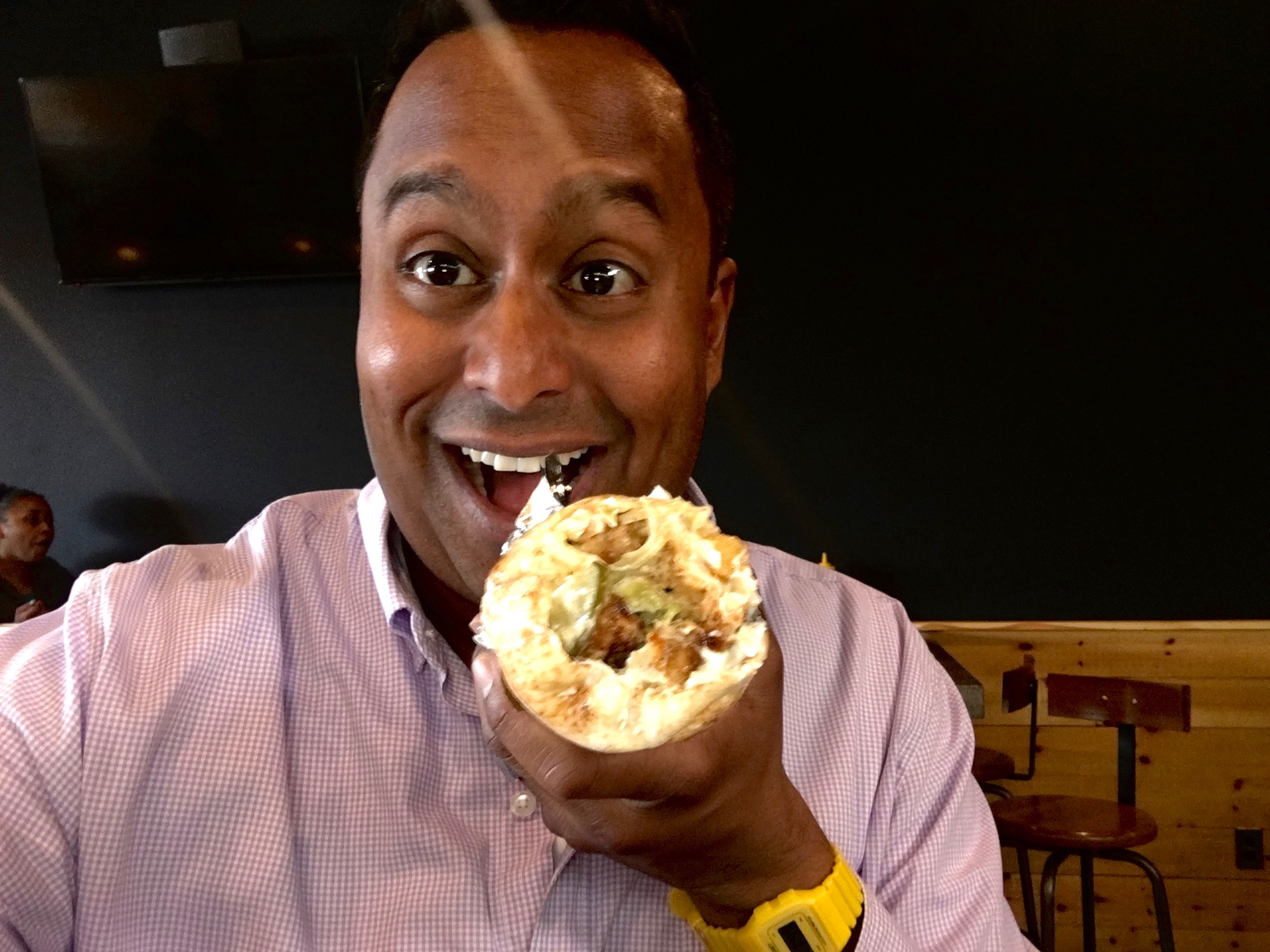 The Vitals:
the spot: Bucharest Grill 2684 E. Jefferson Detroit MI 48207
the eats: Bucharest Shawarma
the bucks: $5.49
the full nelson: the biggest shawarma sandwich I have ever had

There is a lot to be said about Middle Eastern food in Detroit. First off the neighborhood of Dearborn is home to more Arab Americans than any other city in the US. And that means serious shawarma game abounds. Now Middle Eastern food is more than just shawarma(vertical spit roasted meat in case ya didn’t know), falafel and kabobs. It is more than just cheap take out. But in the Cheap Eats world, this cuisine excels; just ask any broke college student. There’s no shortage of places to choose from when it to comes shawarma in Motor City, but one place just rang out by hipsters, Lyft drivers and Detroiters of all walks of life: Bucharest Grill. And for good reason: the shawarma sandwich is the size and weight of a Mission Style San Francisco burrito. But unlike a Mission Style San Francisco burrito, the weight comes not from rice and beans, but from a serious serving of chicken. Now about that chicken, something that frankly caught me off guard here was that at Bucharest, they use grilled chicken breast versus the stacked layers of chicken that cook on a vertical rotisserie, which is traditional. Which is better you ask? I could tell you it doesn’t matter but this method is arguably as good, if not better in some cases because A) the chicken is marinated and B) grilling the chicken means means more more of that seasoning is browned which means more flavor. Like I said, there is plenty of shawarma in Motor City, but for $5.49, you’re gonna get a belly’s worth of shawarma – and that’s the Cheap Eats way. 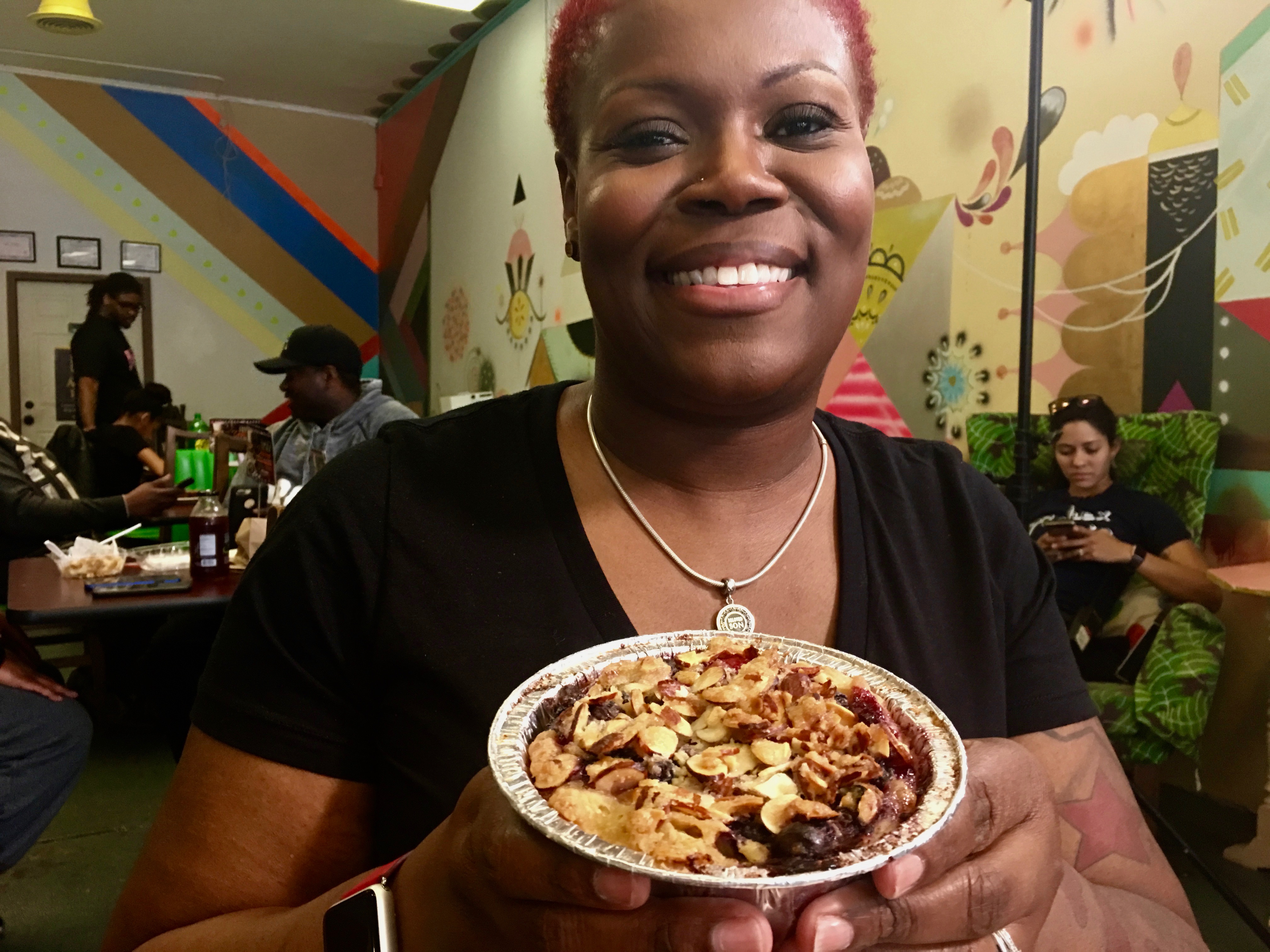 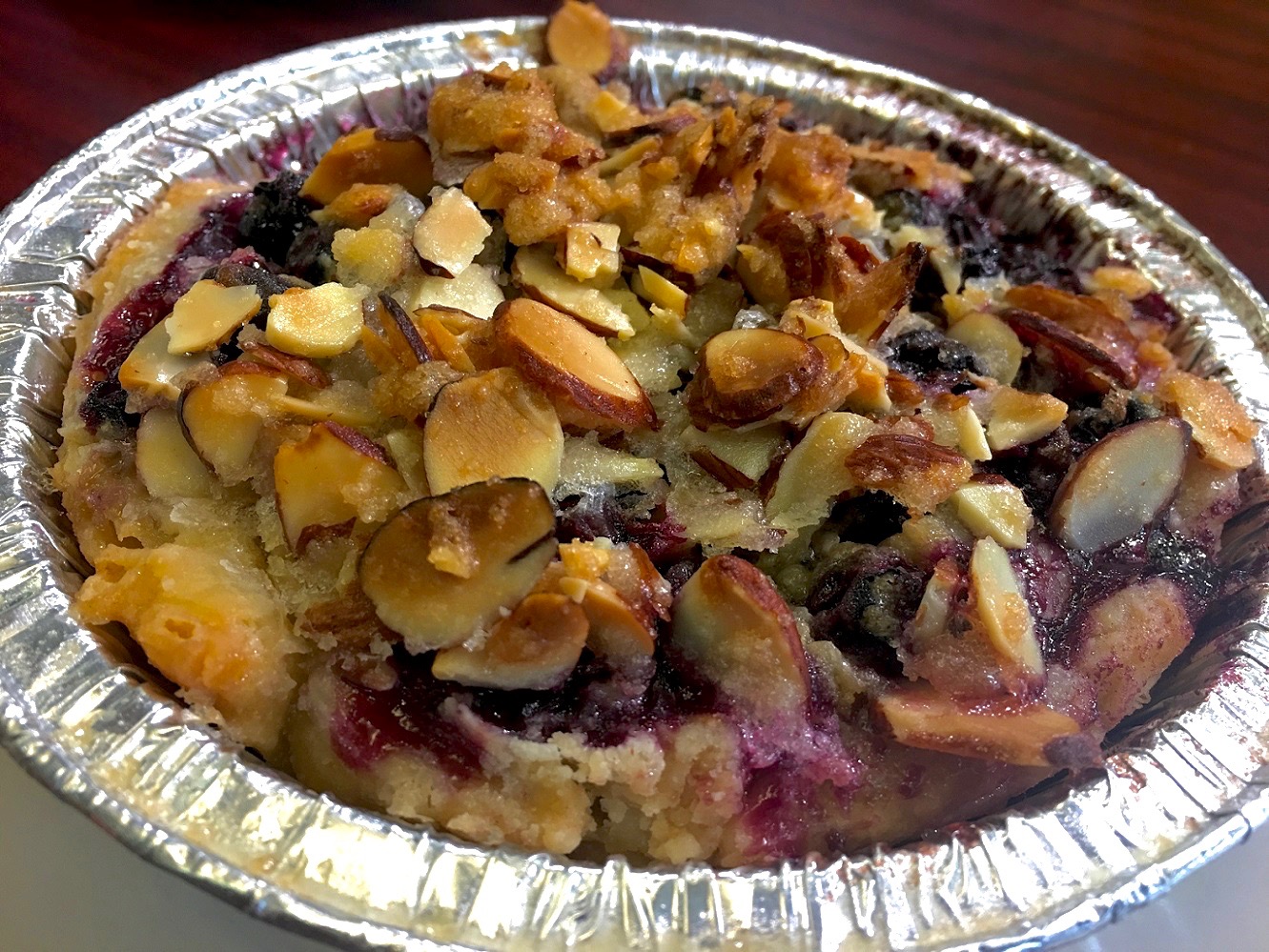 A good baker can make powerful friends. Just as chef and owner April Anderson, who has wooed the likes of Bill Clinton and Oprah Winfrey with her baking skills. With celeb customers and this being the era of $5 cupcakes, one might think that Good Cakes might be a budget buster, but April keeps it real with Cheap Eats prices and a sense of place. Livernois Avenue, where Good Cakes set up shop was once a go to shopping strip during the Motown era before falling upon hard times in the 1990s. Now the area is on a comeback and places like Good Cakes and Bakes are the reason why: independent businesses looking to bring up the neighborhood and themselves. Now you have to be wondering how I settled on Blueberry, Goat Cheese and Basil. I mean, its unusual right? Well that’s pretty much why: I wan’t a pie to challenge the palate.  And this pie certainly did that. April is one of those chefs I come across who is essentially obsessed with her craft. Beyond her training as a pastry chef, April studies up on Food Network and Cooking Channel shows, and this pie is the proof in the pudding that good pie making should never be easy as pie. See what I did there? And$3 for my own mini pie, well I may never look at a slice of pie again. 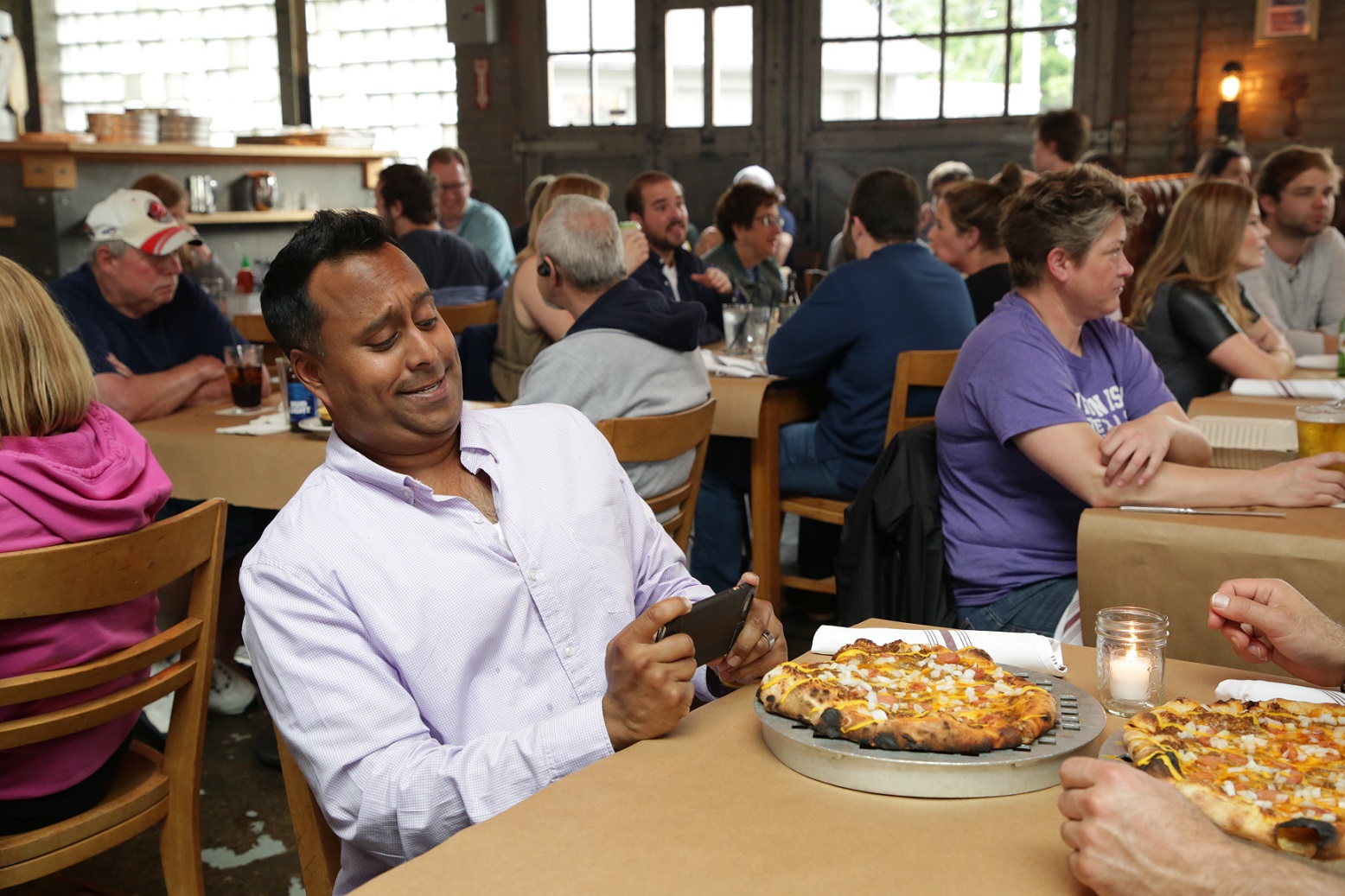 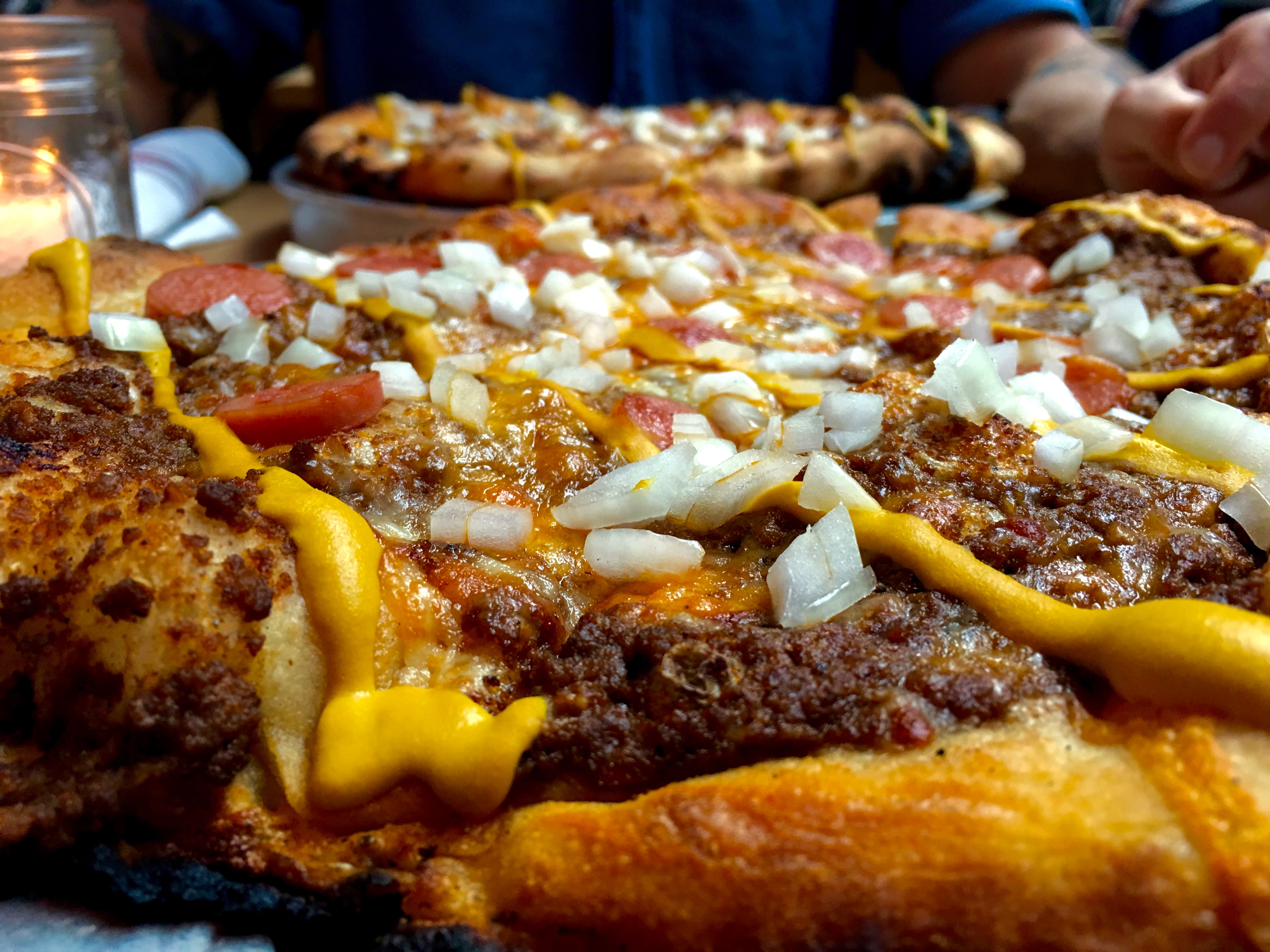 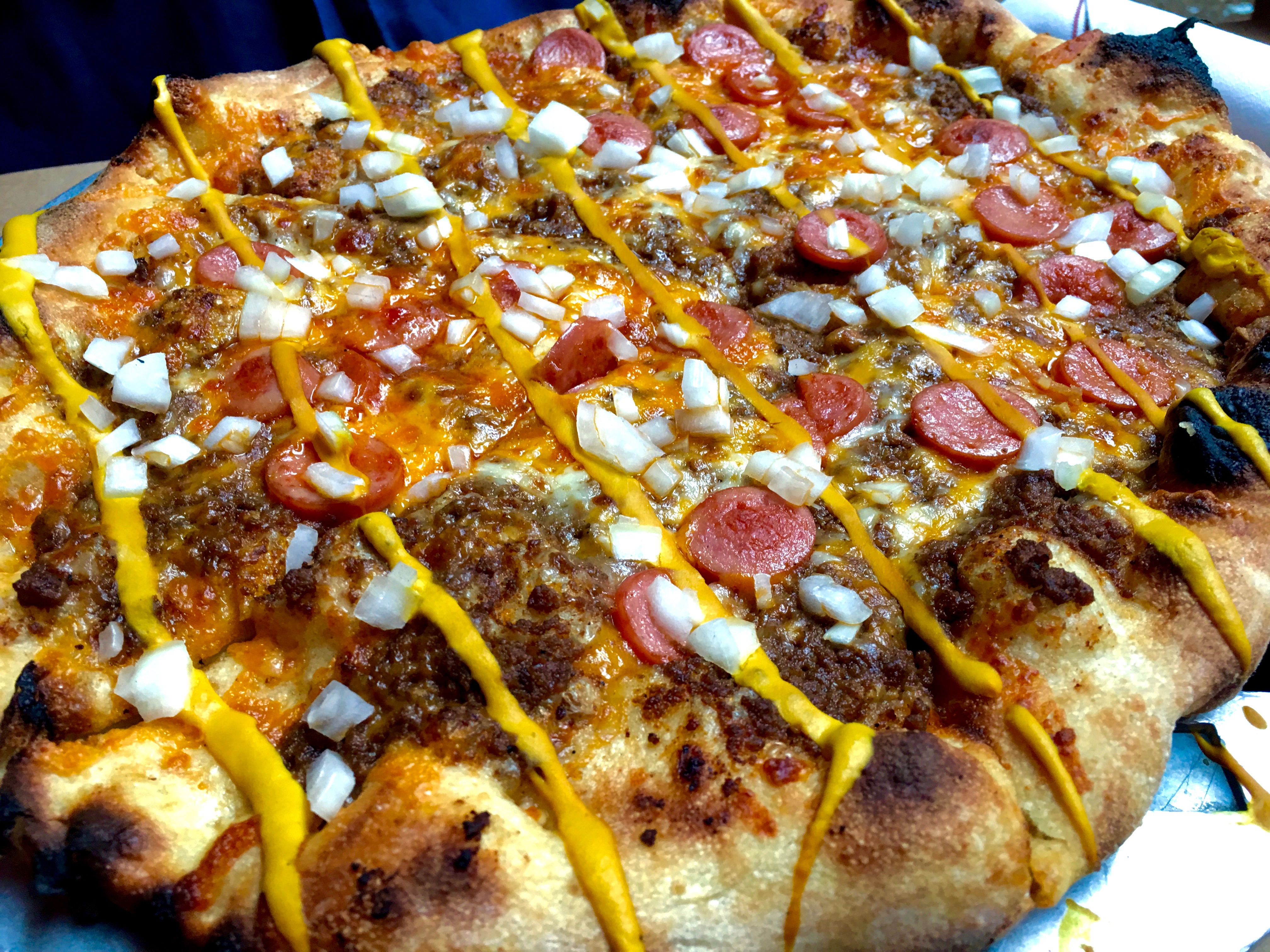 The Vitals:
the spot: Vinsetta Garage 27799 Woodward Avenue Detroit MI 48072
the eats: Sir Shakes Coney Pie
the bucks: $13.95
the full nelson: The most creative pizza making I have encountered

I might seem like a pure food adventurist: up for any challenge or new experience but I am also a purist. Especially when it comes to pizza. A good margherita pizza or sausage and peppers – fuggedaboutit! But playing safe can only get you so far and when I travel to a new city, I must welcome local food traditions with open arms. So Detroit has this thing for chili dogs. They call ’em Coney Island dogs and do yourself a favor and don’t run that past a NYer – they have strong feelings about it. But we can all agree that a chili dog done right, is almost an America rite of tube steak passage. Now convert that to a pizza and you could have a straight up food trend or food porn, or both. But the Sir Shakes Coney pie is more than fodder for Twitter or Instagram. It is in fact a well thought out dish that sacrifices nothing in the food quality department for something that is still fair game of your food porn hashtag of the week. First off observe the edges, signs of a high temperature and a wood burning oven. Next you will see the “sauce” which is actually a beef heart chili seasoned like the chili 5 way we scored in Cincinnati. I guess Greek immigrants brought there chili game to Motor City as well. Since this is a chili dog pizza, it would make sense to put hot dogs on a pizza but there aren’t just any old wiener. These are Winters 901 L hot dogs, locally sourced with a snappy natural casing. And yes that is yellow mustard and raw chopped white onion as finishing touches. And folks, the flavors worked. I mean if you can handle a chili dog, a chili dog pizza is a walk in the park. You have more breads to help cut into the rich spiced meaty flavors and let me tell you do not knock a beef heart chili until you try it: rich and irony, it works like paté to melba toast. Straight up the most thinking I have ever put into a bite of pizza: just pure pizza genius. 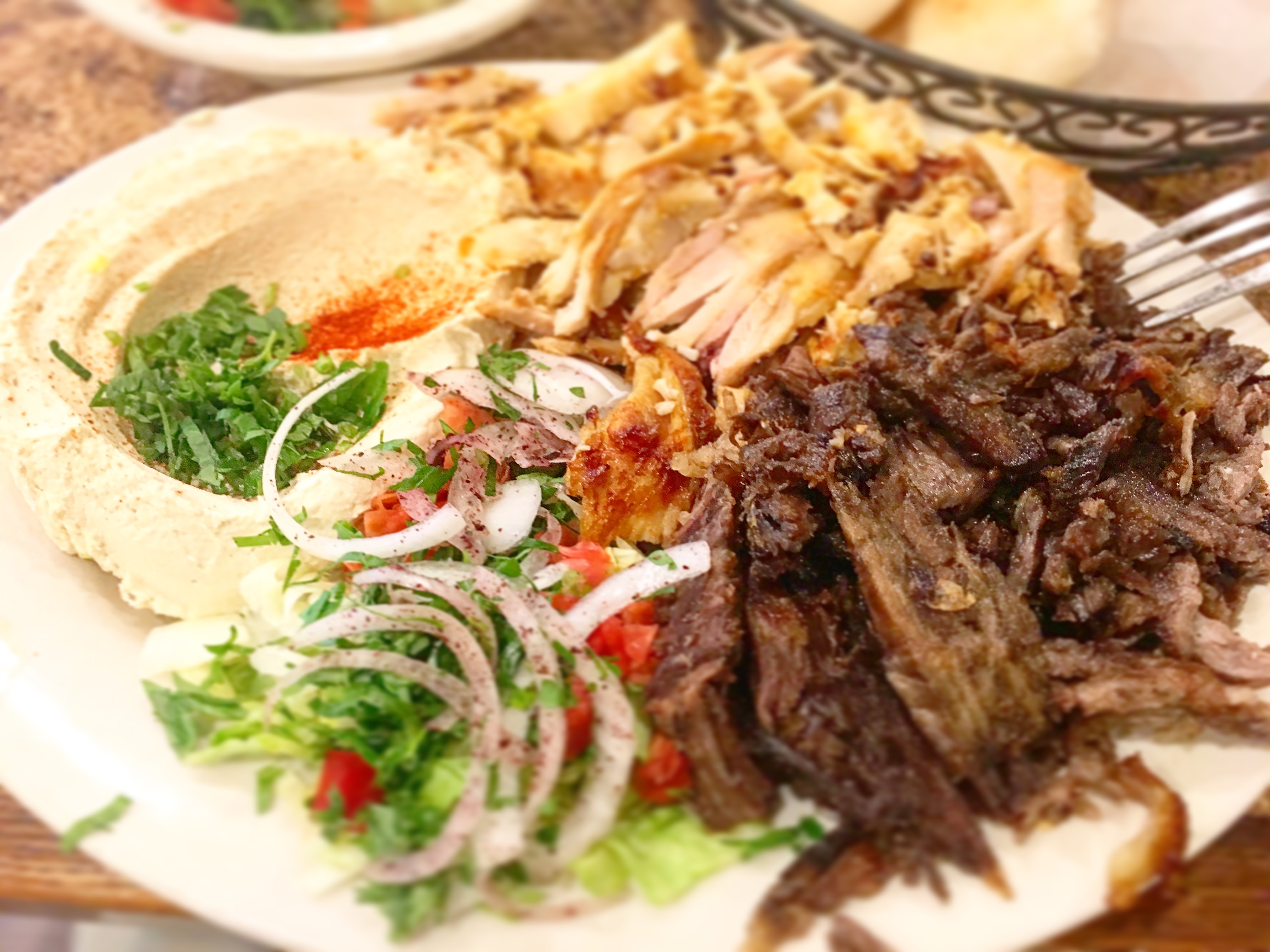 The Vitals:
the spot: Al Ameer 12710 W Warren Ave Dearborn MI 48126
the eats: Shawarma Combo plate
the bucks: $15.95
the full nelson: A big plate of some of Dearborn’s finest shawarma

This was my first time in Detroit so I had a lot of eating to catch up on. Dearborn, a neighborhood of Detroit that is home a the largest Arab American population has a bevy of restaurants featuring one of my favorite foods: shawarma. Now I may not have grown up on this stuff in St Louis(I rocked plenty of gyros though) but I did make it part of weekly diet in my years in LA. In fact, Zankou Chicken, a popular Lebanese Armenian restaurant just may have my favorite shawarma of all time but that doesn’t keep me from trying any reputable place I come across. Al Ameer won a James Beard award so it made for the perfect start. Being a glutton, I went for plate vs a sandwich and being indecisive, I went for chicken and beef. This is certainly top tier shawarma but its the details that really set Al Ameer part from even my beloved Zankou like the silky smooth hummus and their  uber fresh Toum; that white garlic paste that seems to be the Arab version of salsa or chimichurri. I will tell you that I had leftovers from this shawarma plate but over $15 is indeed pricey for a street food no matter how generous they are with portions. But you know what? I would go back here and get it again in a heart beat. 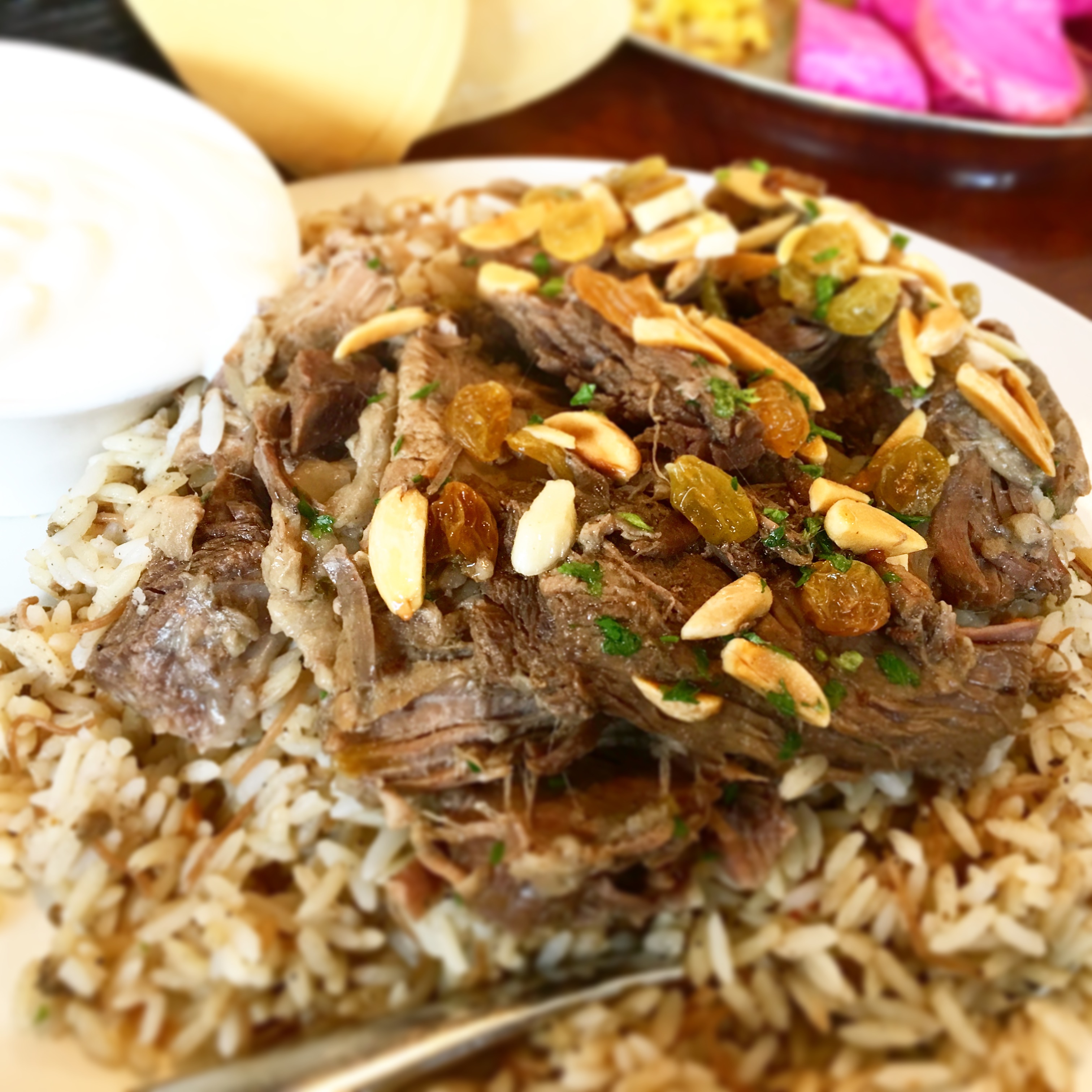 When you ask around about good Middle Eastern eats, folks in the know will try and steer you away from the typical fare like kabobs, falafel and shawarma to the prized dishes like lamb ouzzi. In fact when I was asking some ladies who were rocking a hijab about the best shawarma in town they just rolled their eyes and said try something different. “Like what” I asked? And the her eyes lit up as she said “like lamb ouzzi”. So this dish is the real deal. Try googling it and you won’t find much more information beyond some recipes and its popularity in the Middle East, particularly Iraq. Being of South Asian descent I can get down with a biriyani: the aromatic rich rice dish studded with meat. Ouzzi is this but eases up on some of the spices as one would expect in comparing Middle Eastern to Indian flavored dishes. The dollop of yogurt is like whipped cream on a frappaucino but it just pushed the argument that this rich, hearty dish is really meant for breaking a fast during Ramadan or celebrating nuptials. It may have cost me $16 bucks but I tore at this dish for three freaking days. Even though this was my first time having Ouzzi, it is safe to say that Al Ajami serves up some Bang for your Lamb Buck.

And that was Detroit my friends. One heck of an American city with history, diversity and a Cheap Eats scene that can keep you occupied for a good old stretch. I came for the shawarma, I stayed for the Coney Island pizza and walked away with a new hashtag #DetMex and got down with some pies good enough for Oprah Winfrey. Motor City – you’re my kinda town.