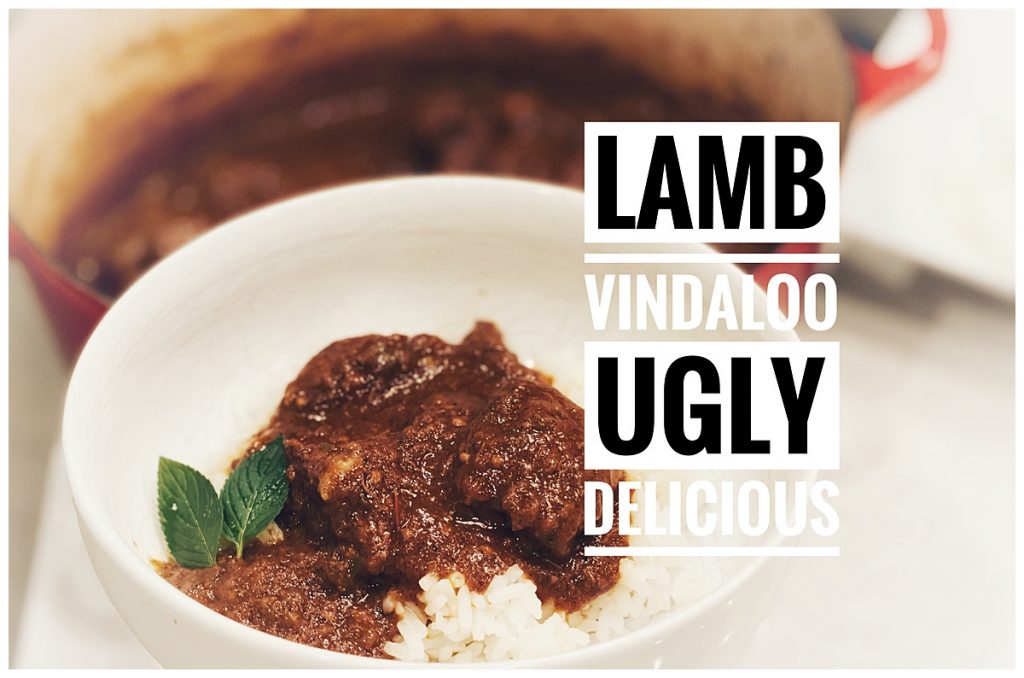 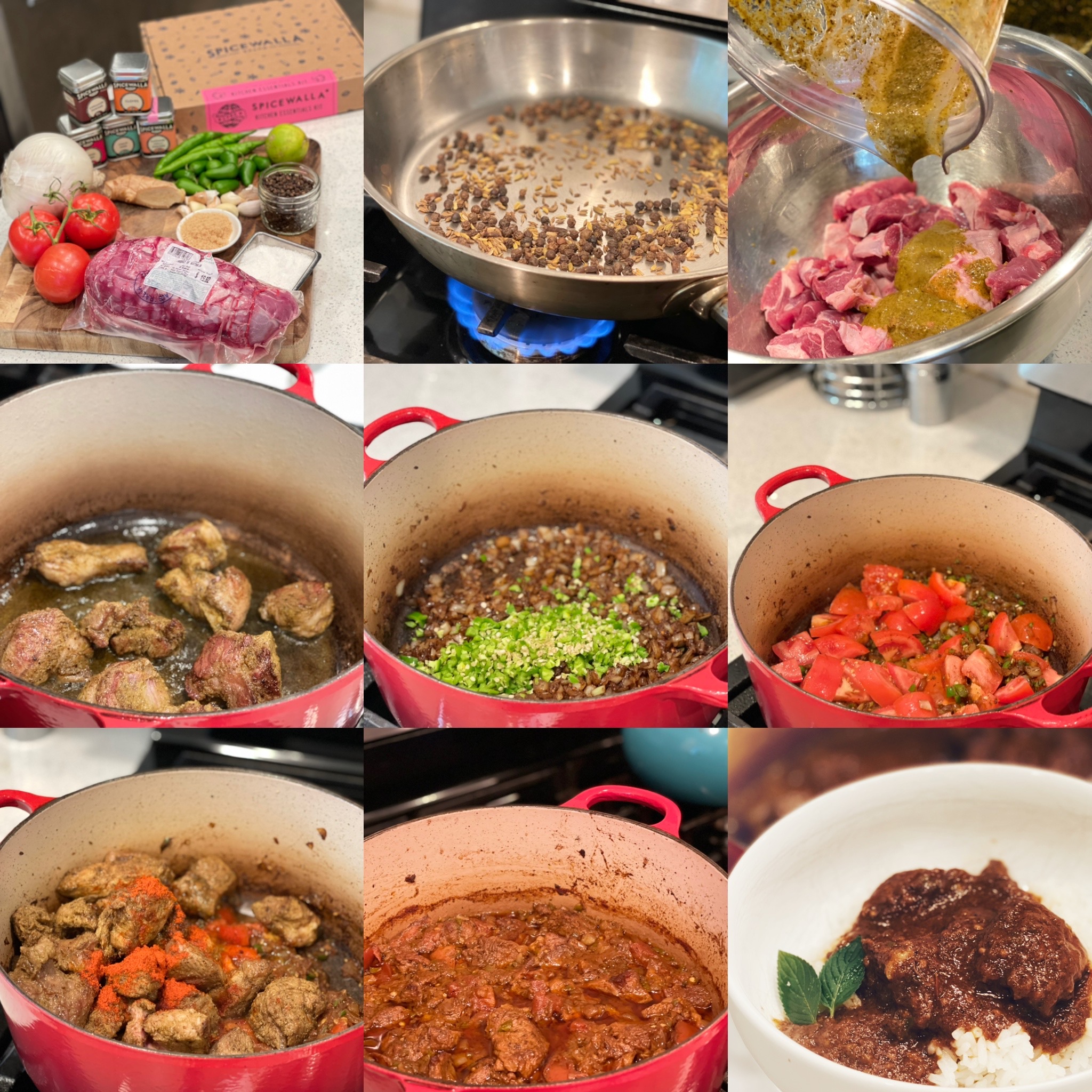 Lamb Vindaloo: a go to recipe

Like a lot of you, my first experience with Lamb Vindaloo was at an Indian restaurant. My parents immigrated from Bangladesh and our lamb curries were just called . . . lamb curries. Indian restaurants in the US are notoriously monotonous with their carbon copy menus, lunch buffets and decor. Which is more a reflection of the American appetite for Indian/South Asian food for that “ethnic option”.

Well times are changing. Diners are becoming more adventurous and the desire for “authenticity” brings me to sharing this ridiculously good lamb vindaloo. If you are remotely a fan of lamb curry, you’re gonna be very happy. 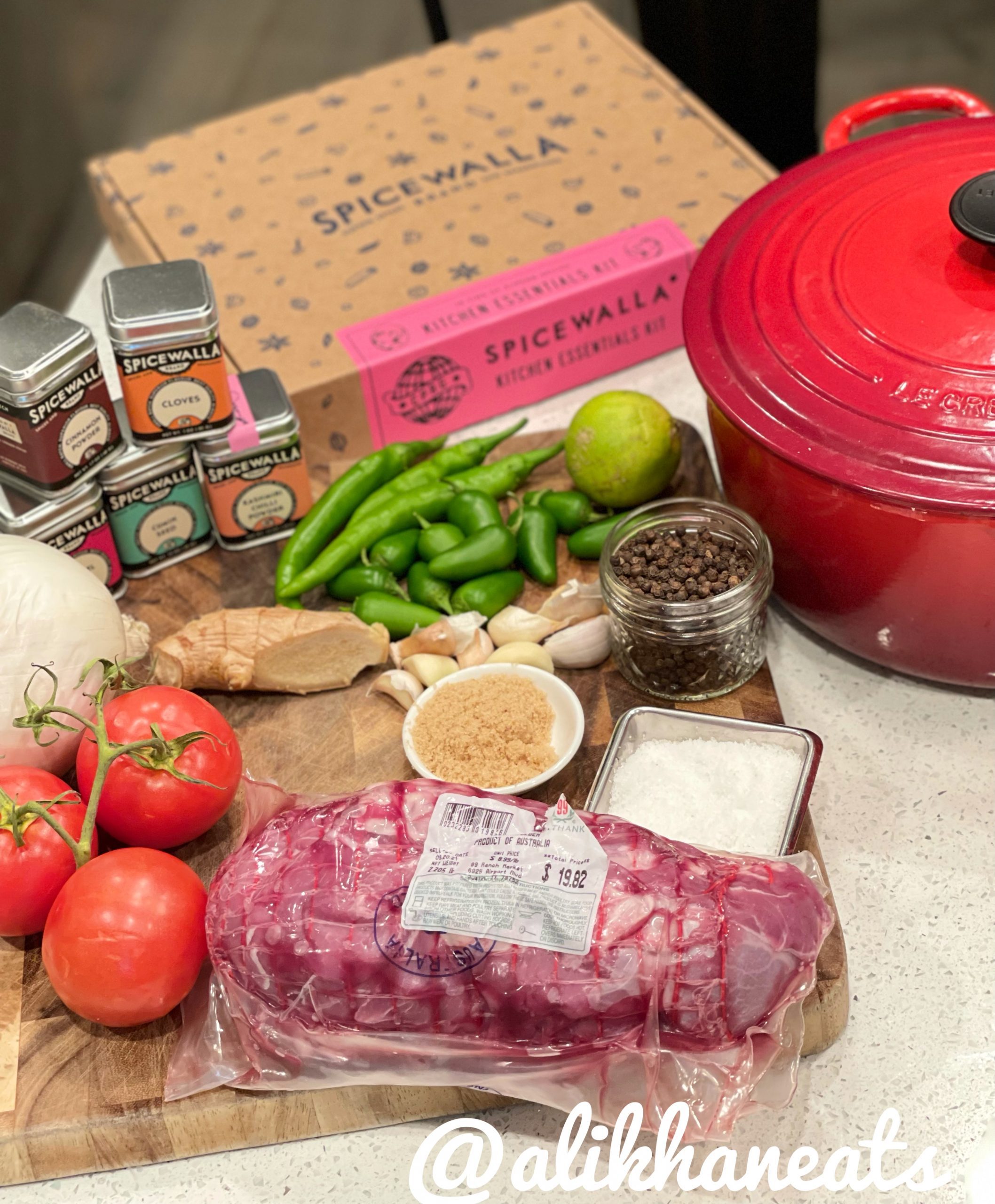 It’s all about the spices

Spices drive curry recipes. Sure there are curry recipes whose signature comes from the addition of butter and cream or spinach, but in every curry lies a certain combination of spices. Vindaloo is no different. Out the gate let’s talk about the spices you will need:

I got all my spices as a generous gift from my pal Meherwan Irani‘s Spicewalla. Chef Irani was featured in Cheap Eats Atlanta, is a James Beard Award semifinalist and is a force for making Indian food something to really respect in the US. In fact this Lamb Vindaloo is essentially his recipe with a few modifications from yours truly. 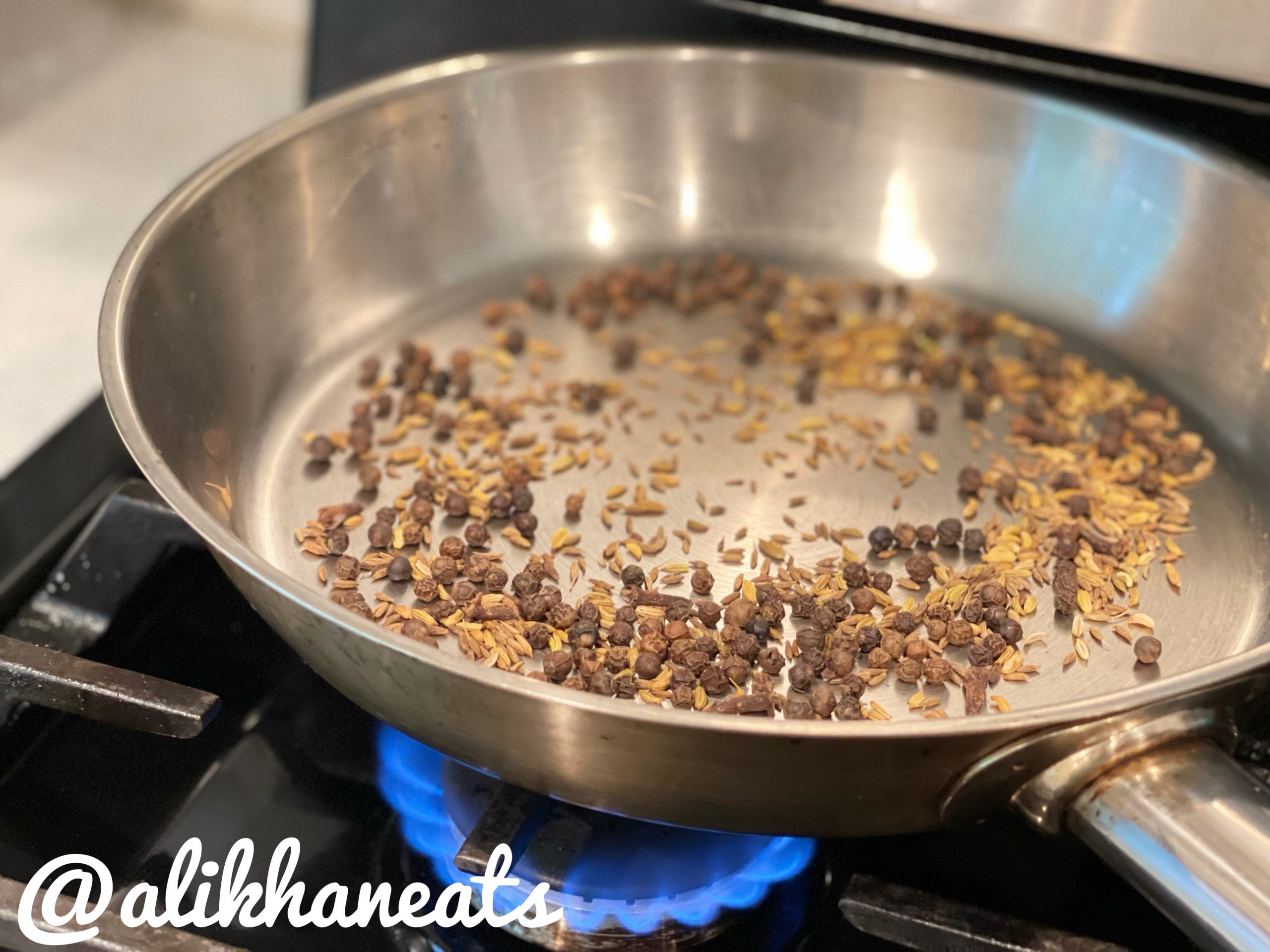 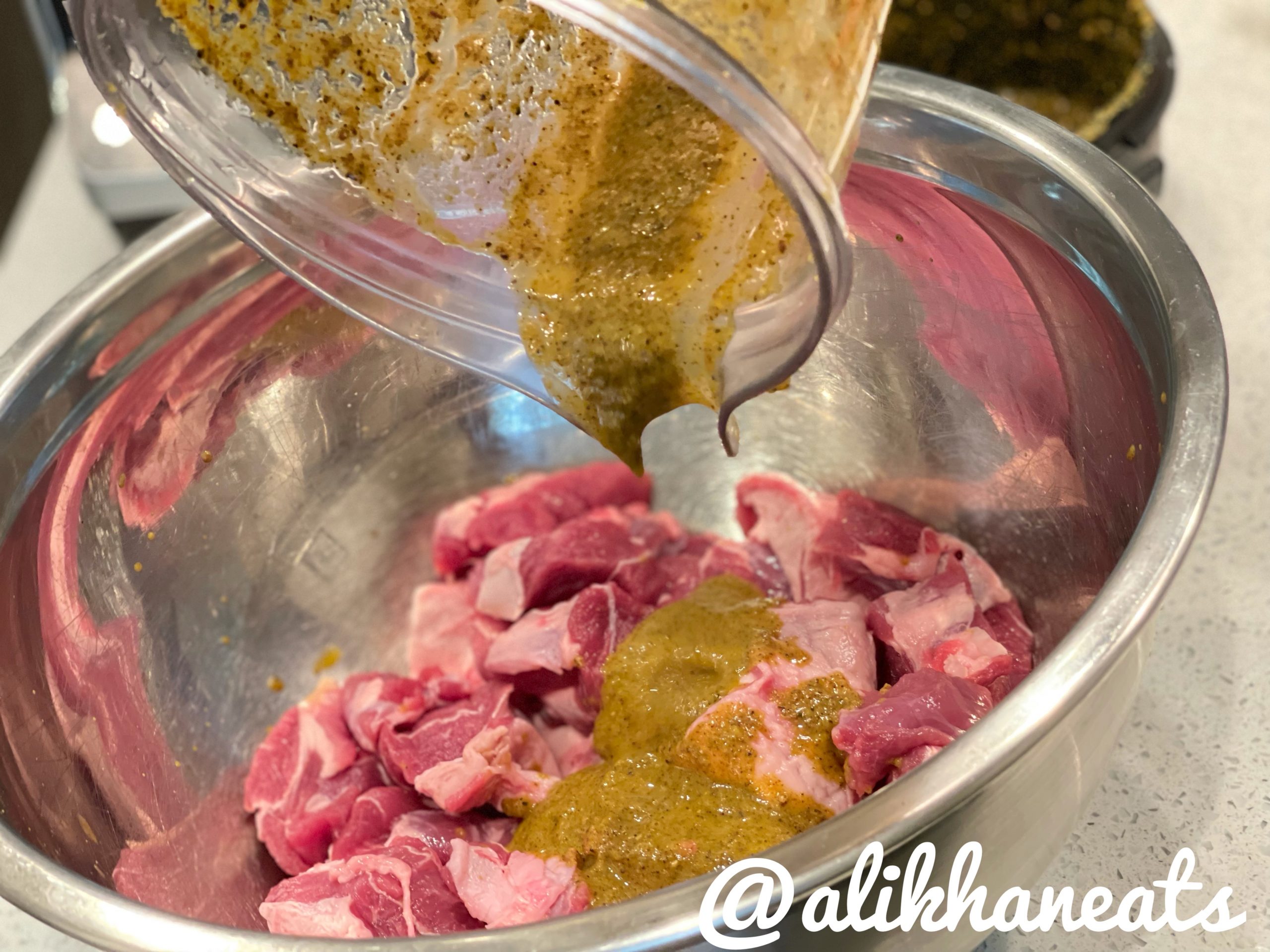 Cut the lamb shoulder up into 1.5″ pieces and place in a bowl. Toast the spices(fennel, peppercorn, cumin seed, and cloves) in a hot dry pan until the spices become fragrant(use your nose, don’t let the cumin burn!). Add the spices along with salt, turmeric, garlic, ginger,  1/2 of the vinegar, ground cinnamon, and 1 tablespoon of Kashmiri Chili powder into a blender or food processor and process till you make a paste.

Pour over lamb and marinate for a couple hours. I went for 3 hours, the original recipe calls for up to 6. Honestly I would try for overnight if I had the time.

*note I initially tried a food processor but was unable to grind the spices so I switched to my Vitamix blender. I added a bit more liquid so my marinade was not quite a paste but worked regardless. 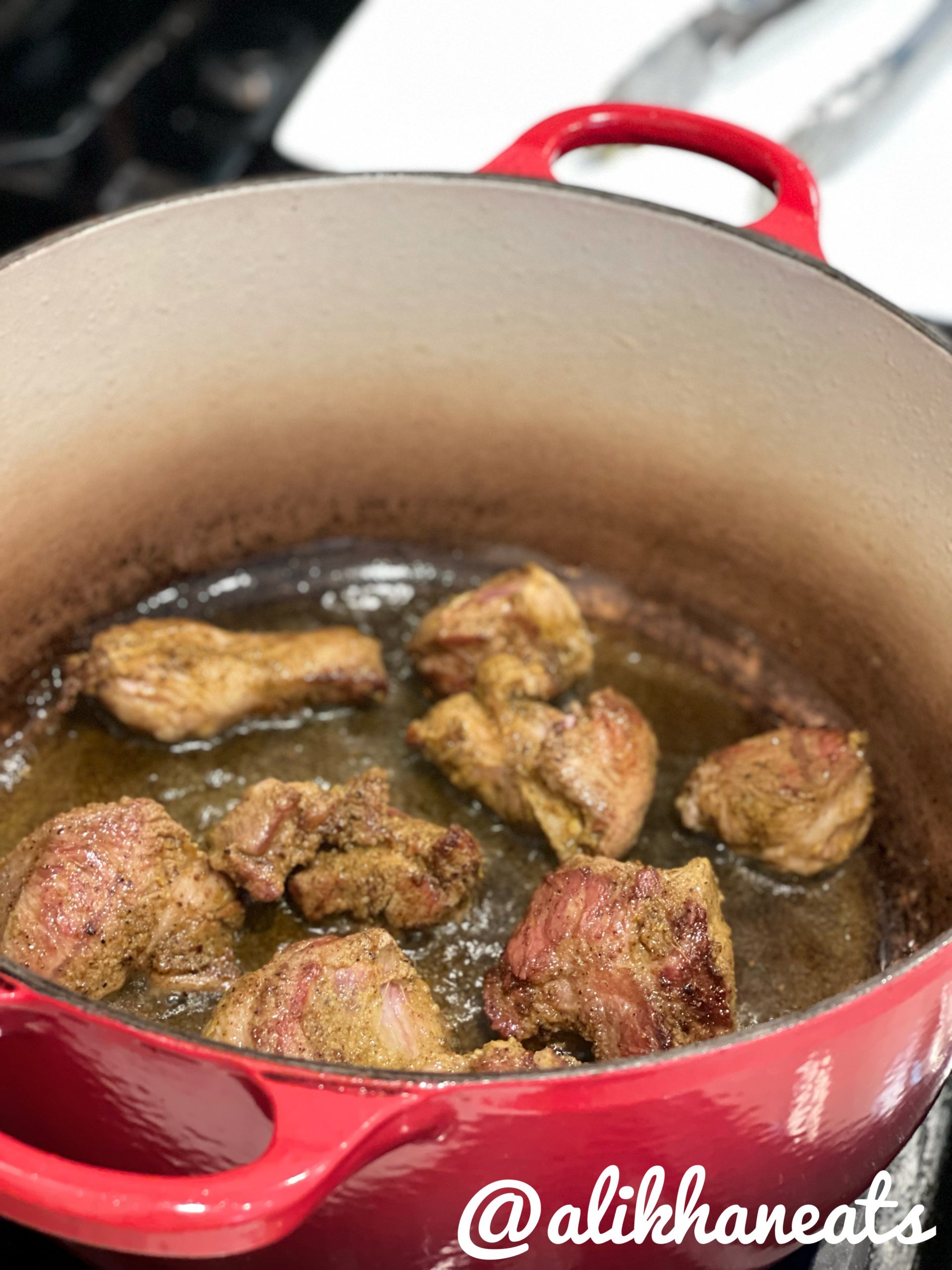 Preheat your oven to 300 degrees. Heat a couple tablespoons of canola oil in a heavy bottomed ovenproof pot until almost smoking. Sear the lamb in batches on all sides and set aside. Don’t rush this and overcrowd the pot. Your patience will be rewarded. Trust the process. 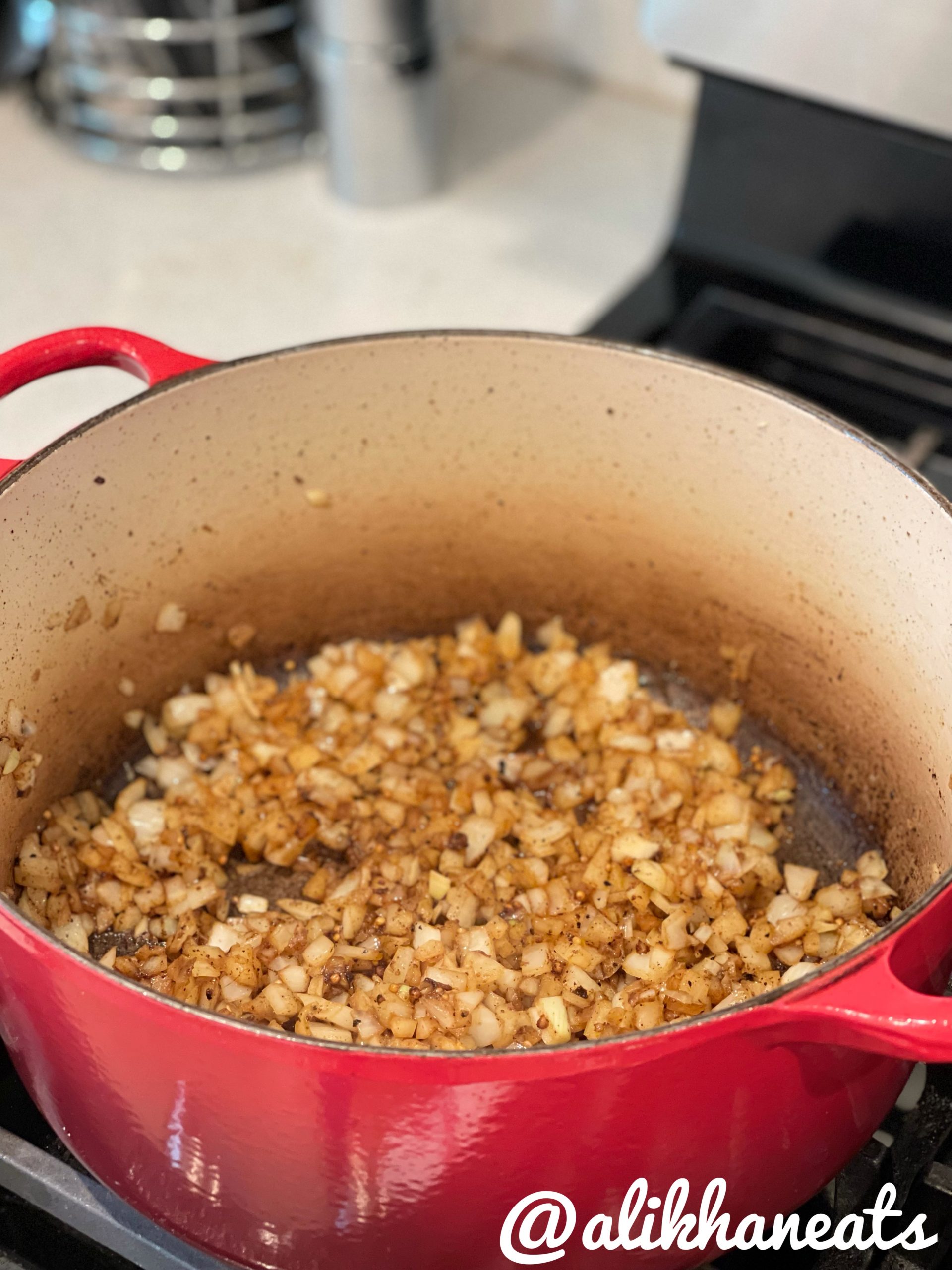 After the lamb has been seared, add the chopped onions. Cook them until they are well browned, being careful not to let the onions burn. Reduce the heat and add more oil as needed. This usually takes me about 10 minutes. 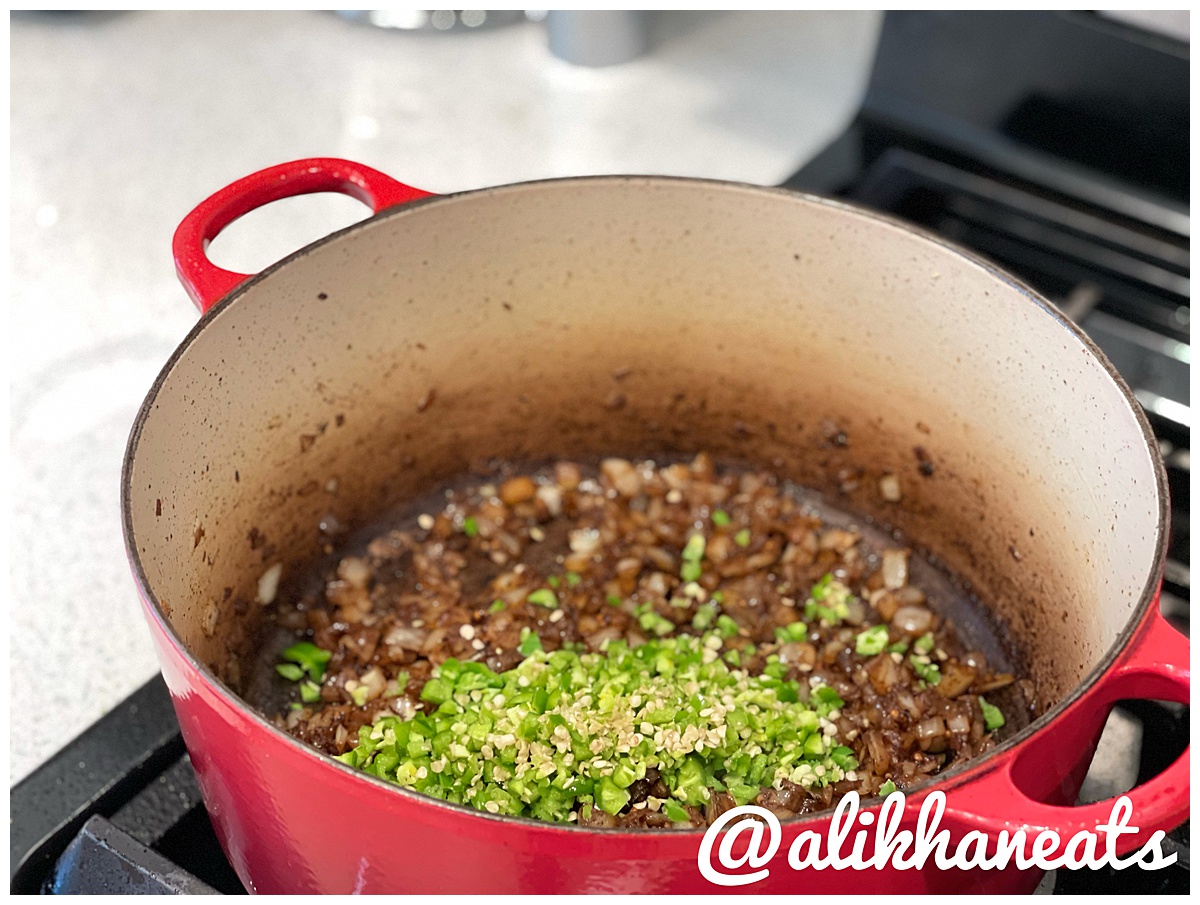 Meherwan’s recipe calls for dried whole Kashmiri chili peppers that give the Vindaloo a deep red hue. I didn’t have those so I subbed in some jalapenos from my garden. I used everything I got, which when minced probably up, added up to about a 1/3 of a cup. Also I kept the seeds in. Vindaloo is usually one of the spicier curries on the menu and lamb can take the heat. If I had to spitball a measurement here: two serrano peppers, three large jalapeño peppers. 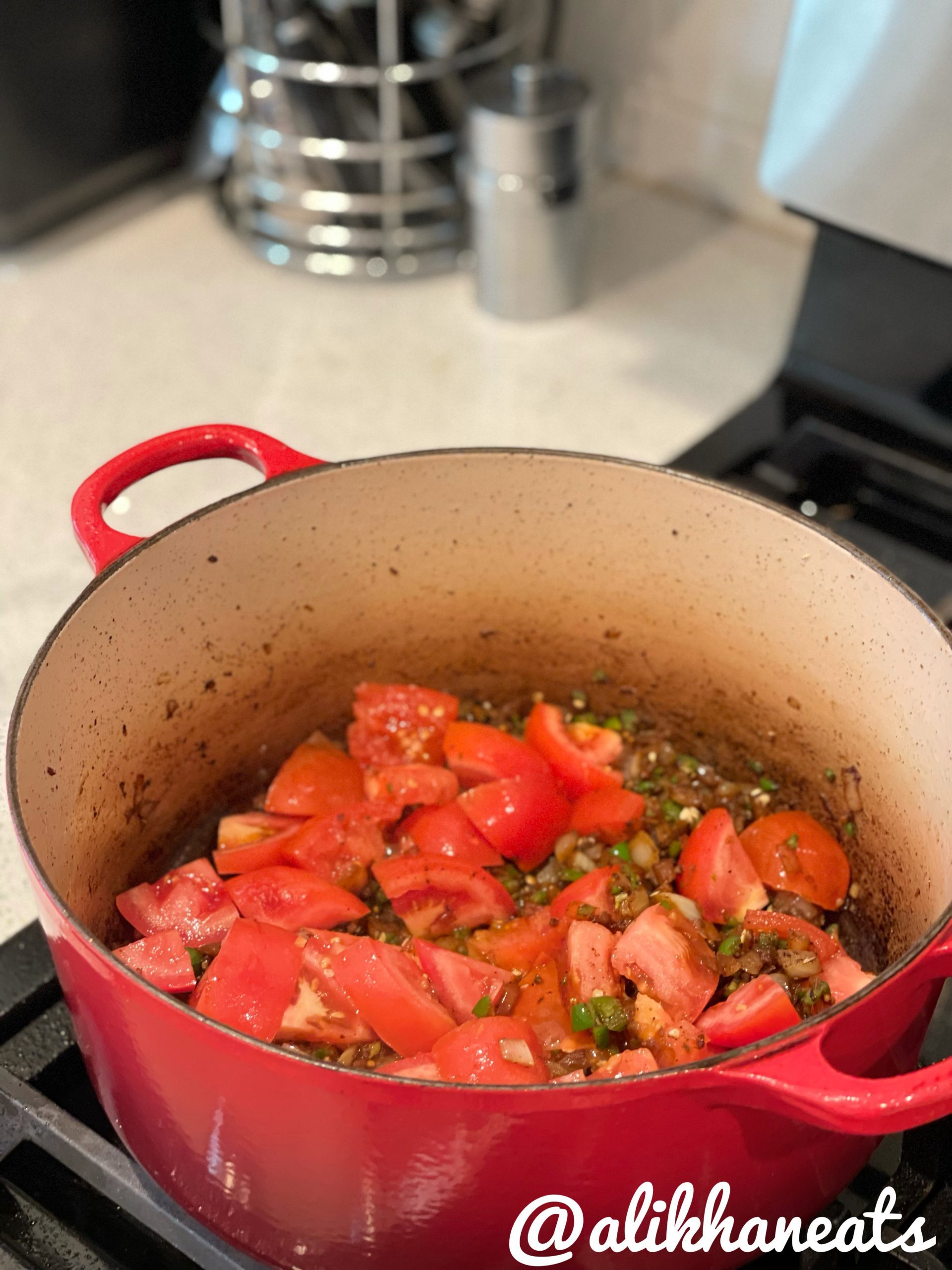 Now I deviated a bit from the original recipe here. I added tomatoes which was not in Chef Irani’s recipe. I’ve seen recipes use them but I can see how it’s not a game changer. Especially if you add a tangy tamarind paste like original recipe calls for. Again, an ingredient I did not have on hand but when life hands you lemons, make vindaloo with tomatoes. 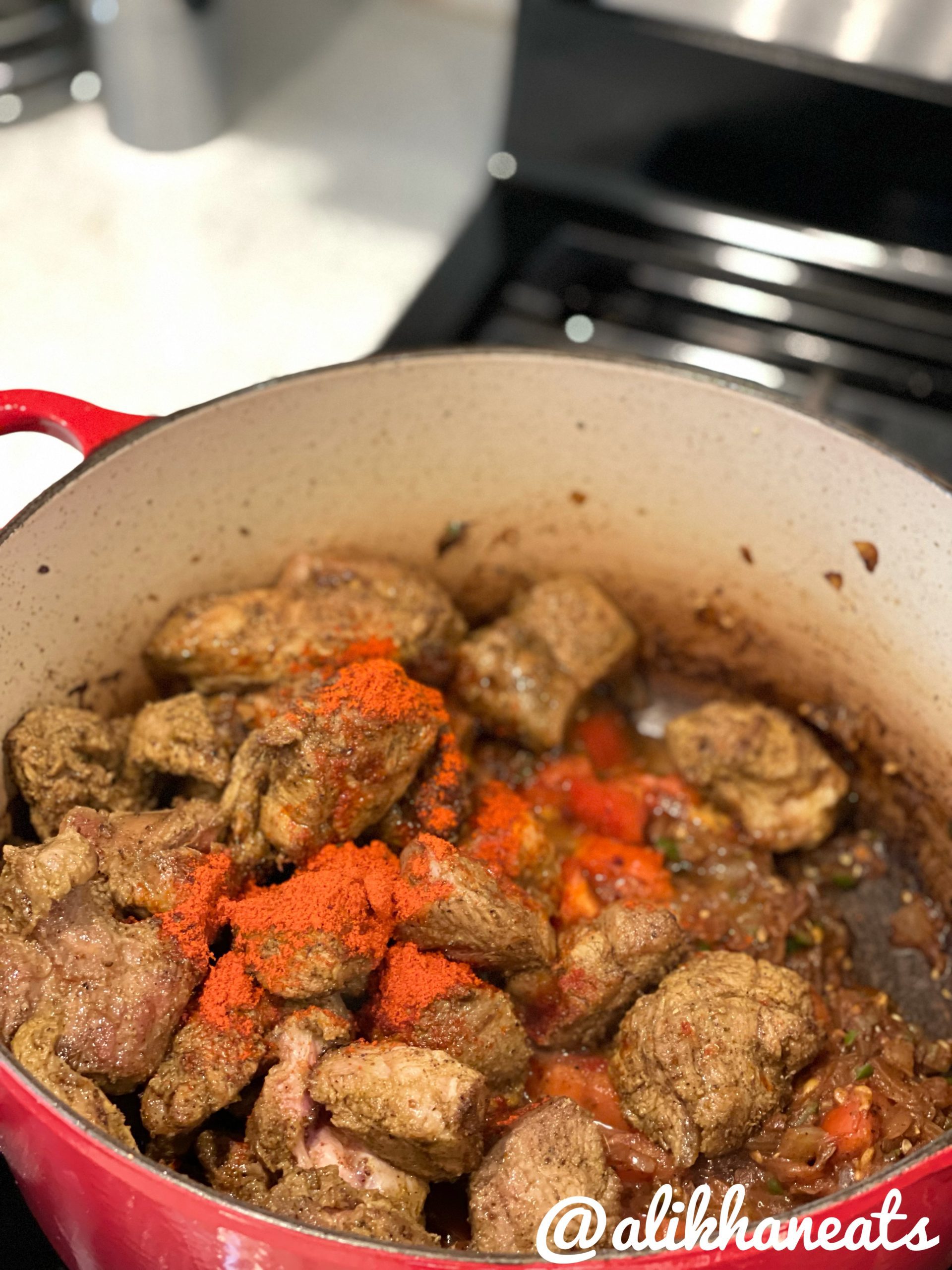 Step 6: bring back the lamb

I toss the tomatoes around a bit and let them soften. Then bring the lamb back, toss that around and bring in the Kashmiri chili. In hindsight I would have added more than the two tablespoons allotted just to pick up more of that fiery red in the finished product. Add the water. Then pop it in a 300 degree oven for 2-2.5 hours. 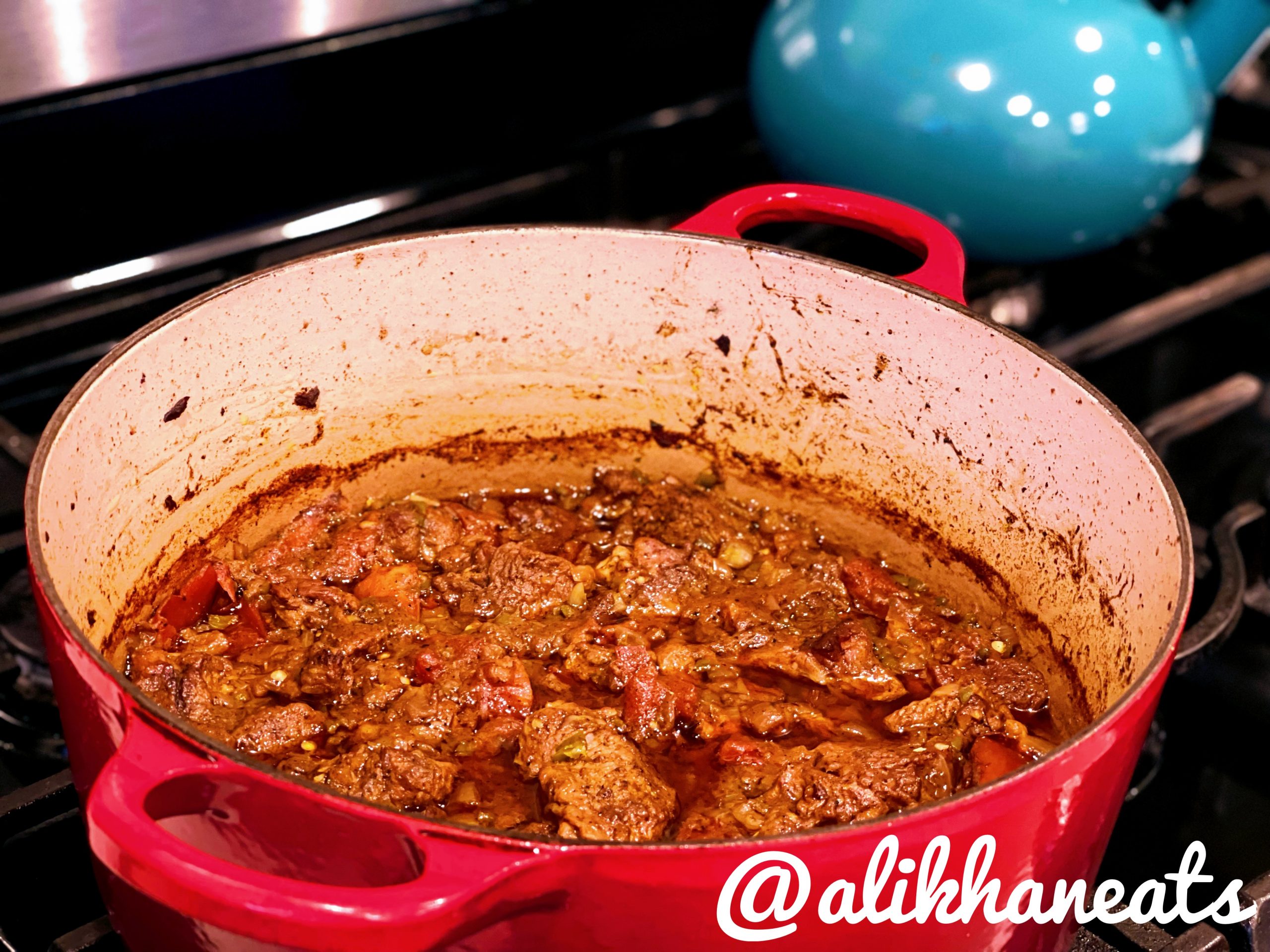 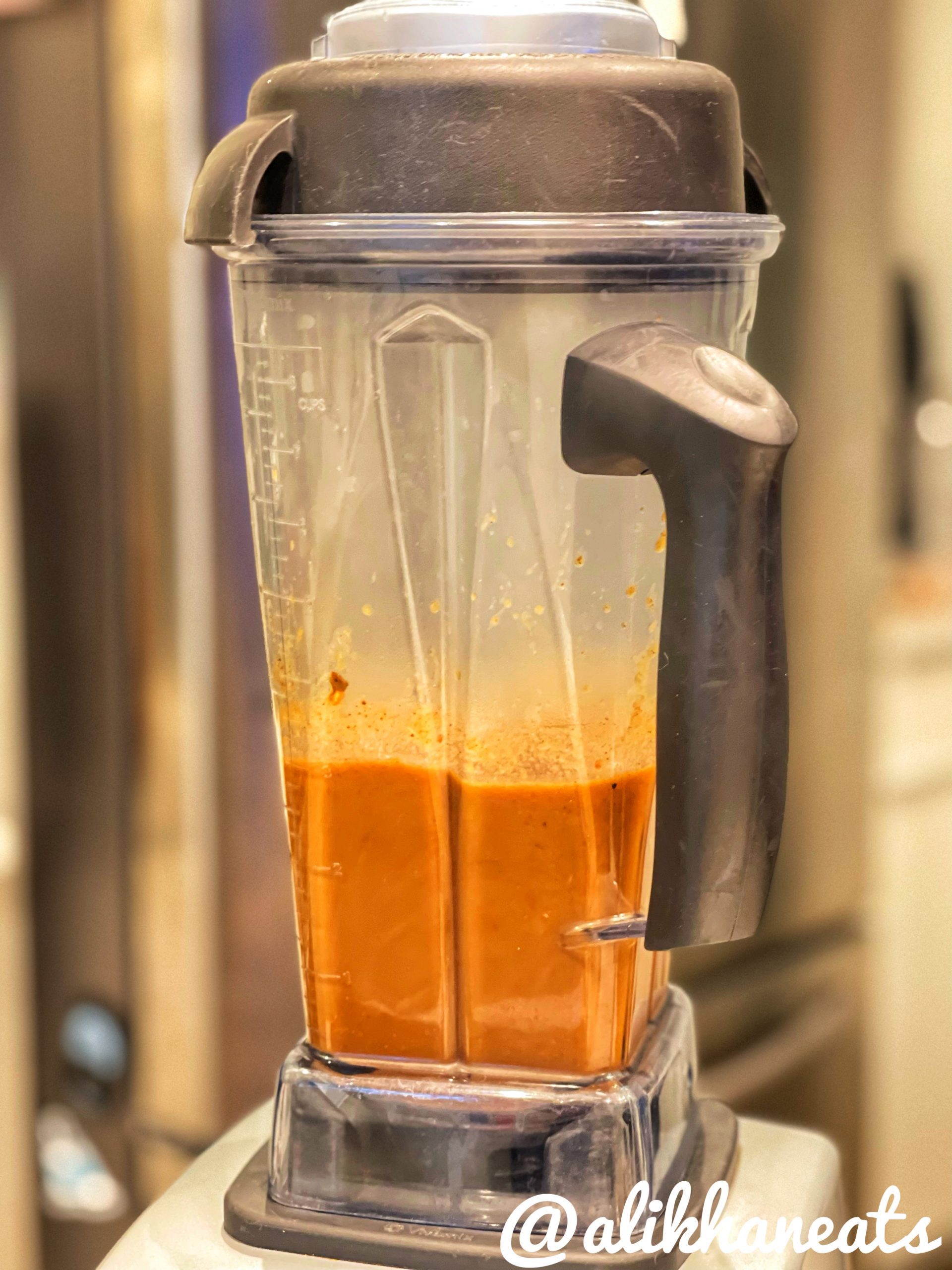 After two hours, check the lamb to see if it is tender, mine was almost fall apart after two and half. Remove the lamb and set aside. Carefully spoon everything left in the pot into a blender, remember it’s hot! Blend to your desired consistency. I like to start slow and gradually up the speed.

Return the sauce back to the pot. Add the brown sugar, the rest of the vinegar and salt to taste. Finally, bring the lamb back. I should add that the original recipe calls for jaggery, an unrefined cane sugar but I uses brown sugar in its place. Regardless, the sugar would be critical in balancing off the heat. 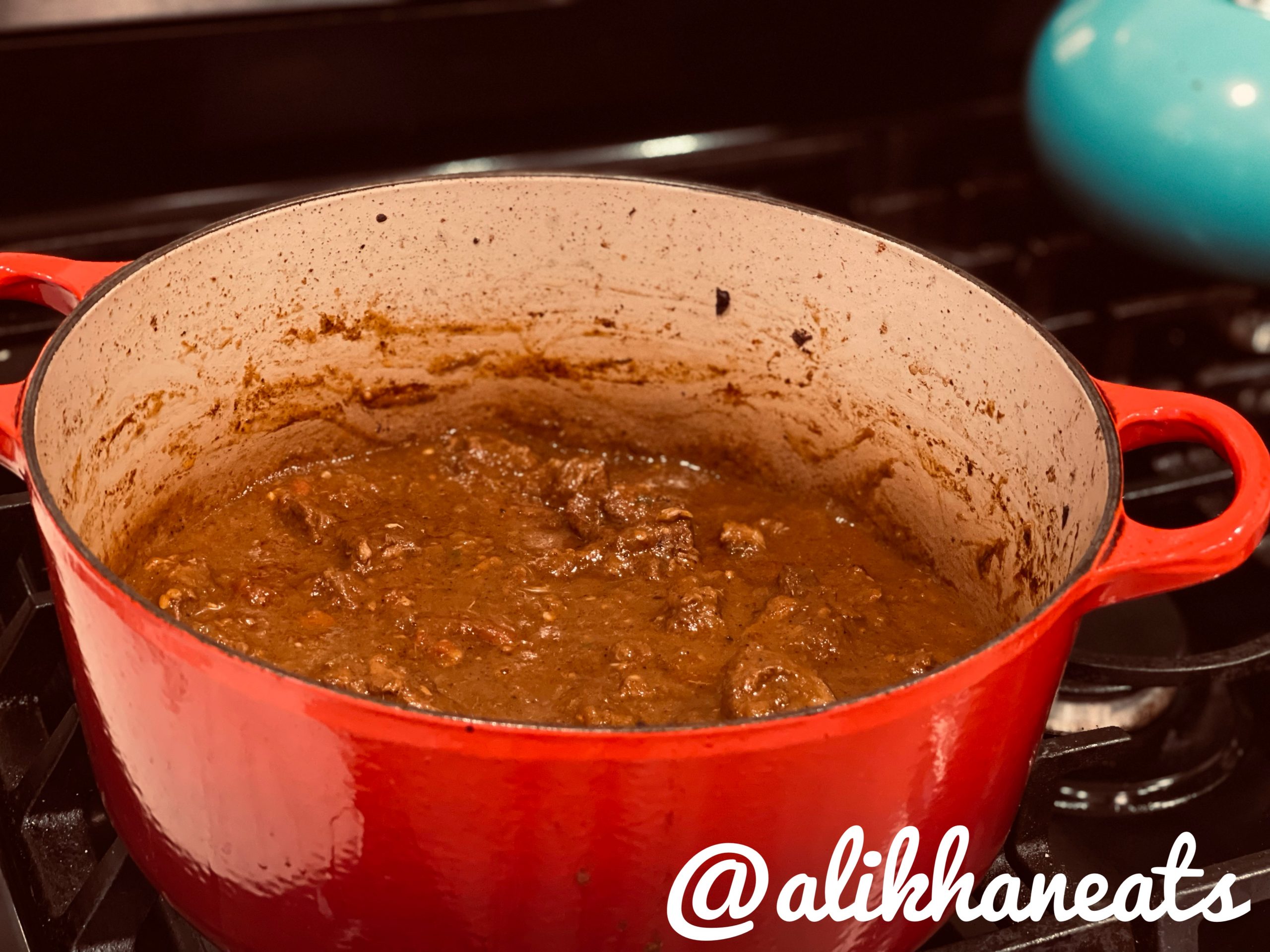 I suppose I could use some photo tricks and cook this in a black pot, add more Kashmiri chili powder and make this pop more red but that would detract from the truth. This lamb vindaloo is straight up ugly delicious. Like a killer carne guisada or a beef stew, the sea of brown is in fact an ocean of flavor. Cue the rice. 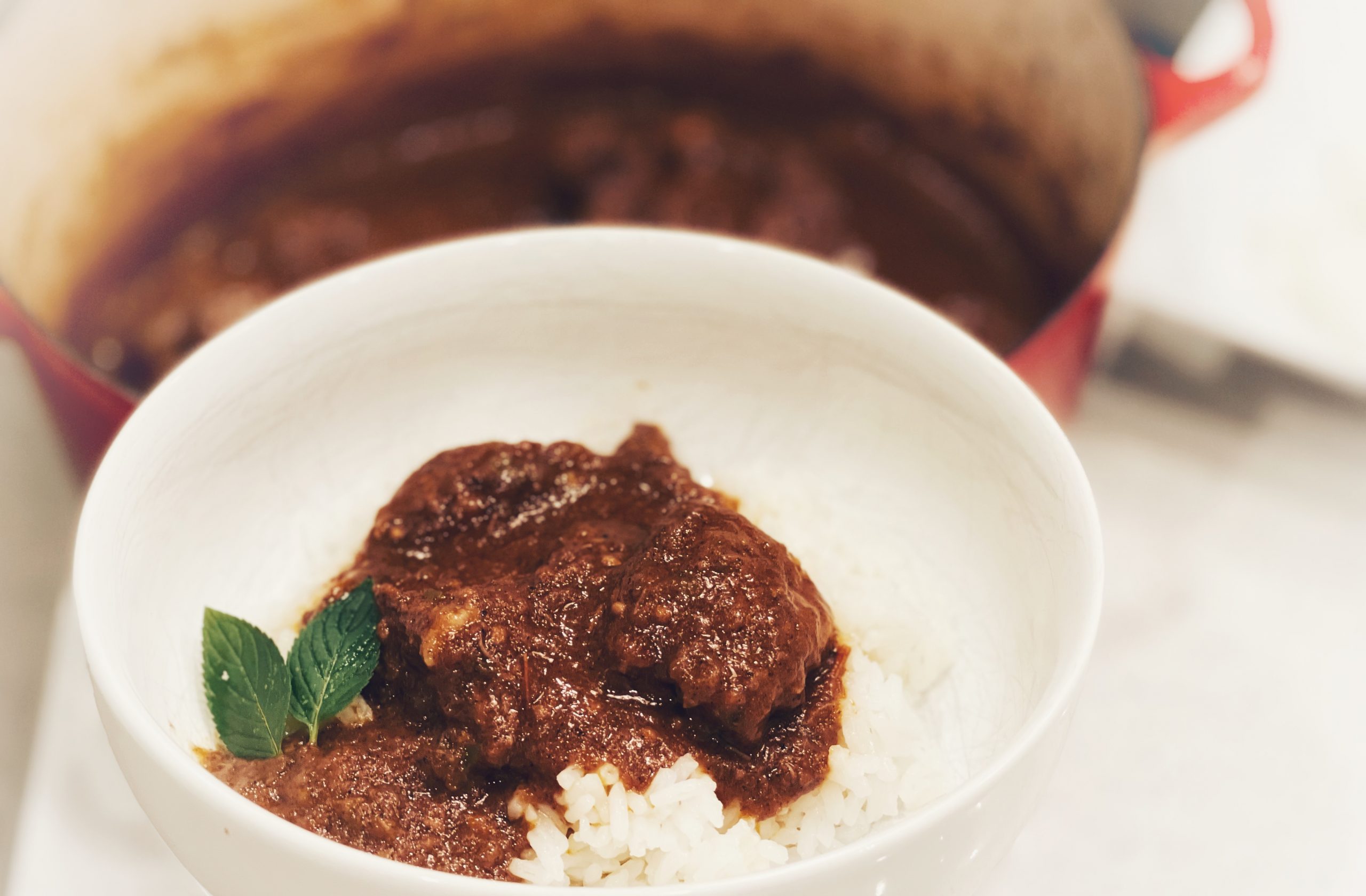 I threw some mint in there to give it a little pop. I mean, I had to try. But you know what? Who cares. As tender as the lamb shoulder came out, it’s the gravy that stole the show. So much flavor: rich, spicy and more importantly the heat and aromatic spice profile was balanced with a splash of acidity from the vinegar, and a kick of brown sugar when I finished the sauce.

A truly complex dish that is also just as comforting, this lamb vindaloo is the new gold standard. I really hope you try it.

One response to “Lamb Vindaloo: a staple curry recipe”