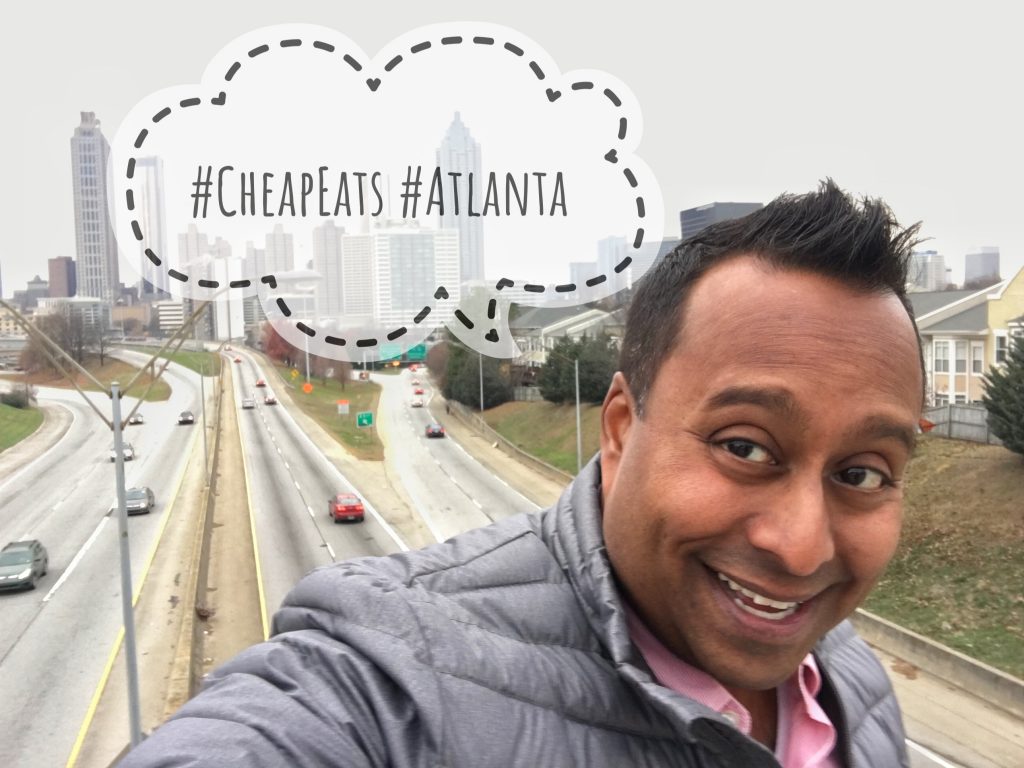 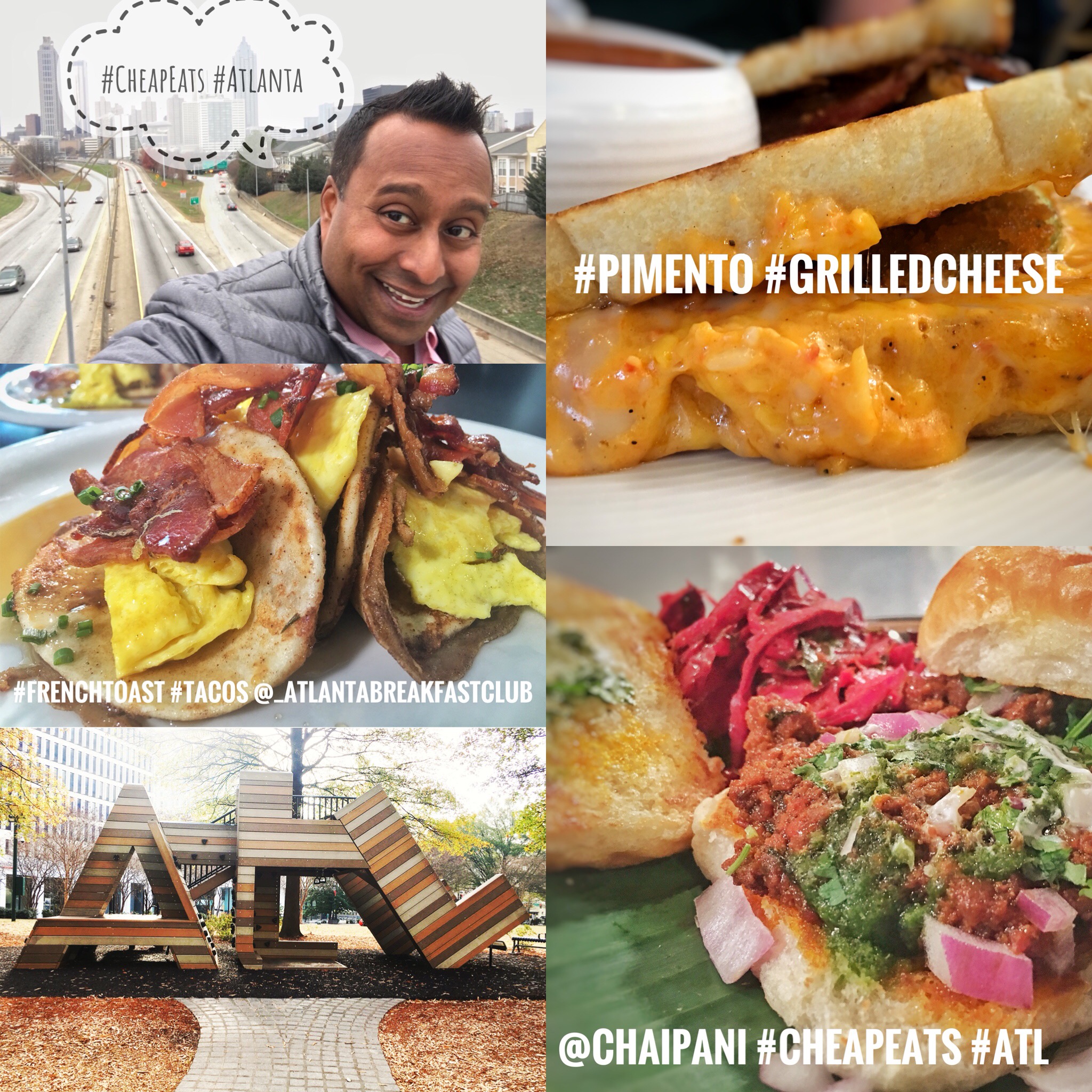 I may not be Childish Gambino but I am childish, and like Donald Glover . . . I am sooo down for the ATL!! Sprawling with a diverse community and great restaurants at every turn, Atlanta reminded me lot of Los Angeles, my old stomping grounds. And an added bonus: I have yet to visit a city in American where I saw such a diverse set of African Americans on a socio-economic scale. To put it bluntly, as my African American über driver did: Atlanta is a place where black people are doing well. They say Washington DC is Chocolate City? I say it’s Atlanta, and it is not just a city, but a thriving metropolis. But before I get too PBS on you . . . let’s get into to the Cheap Eats of the ATL! 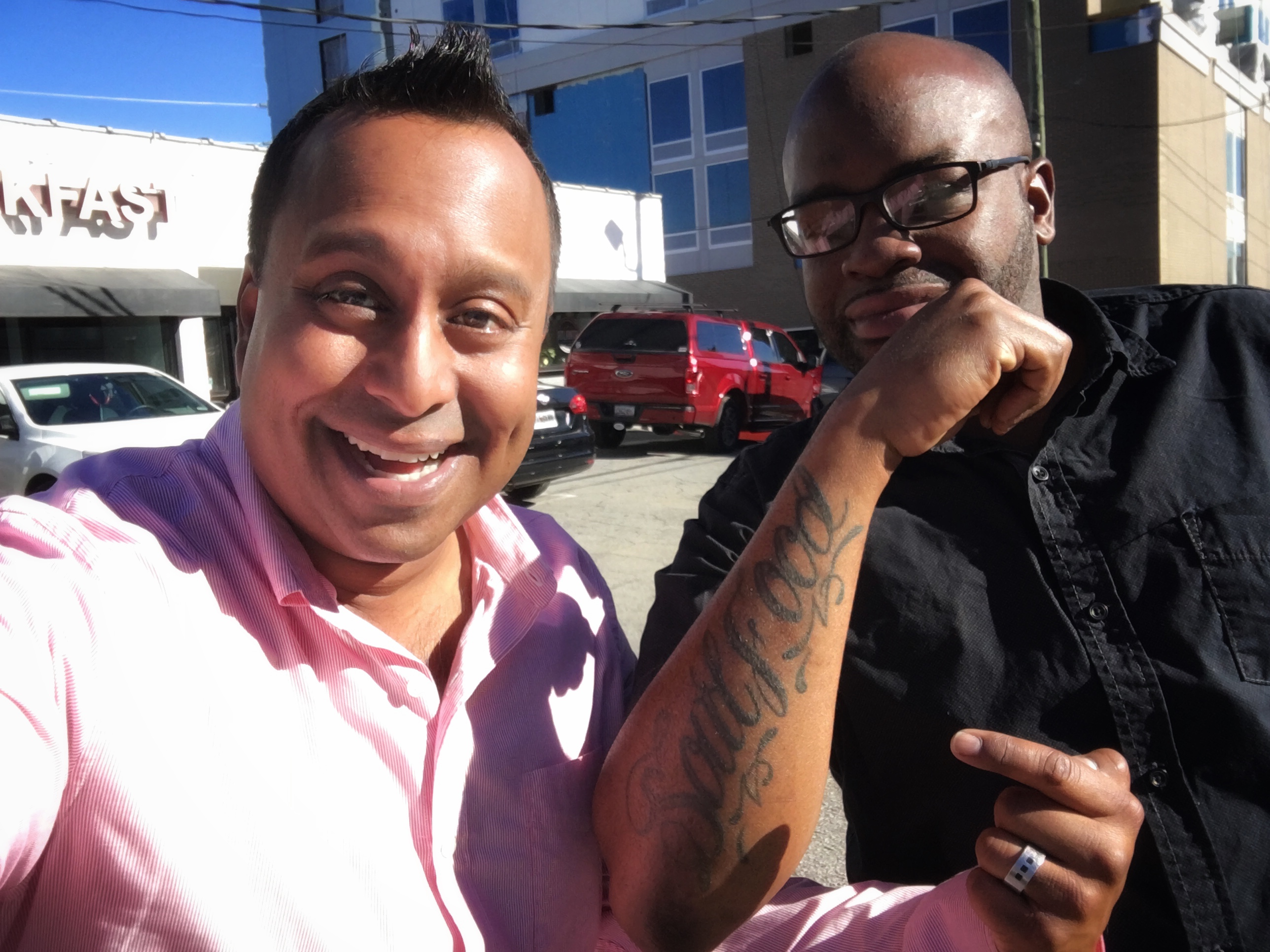 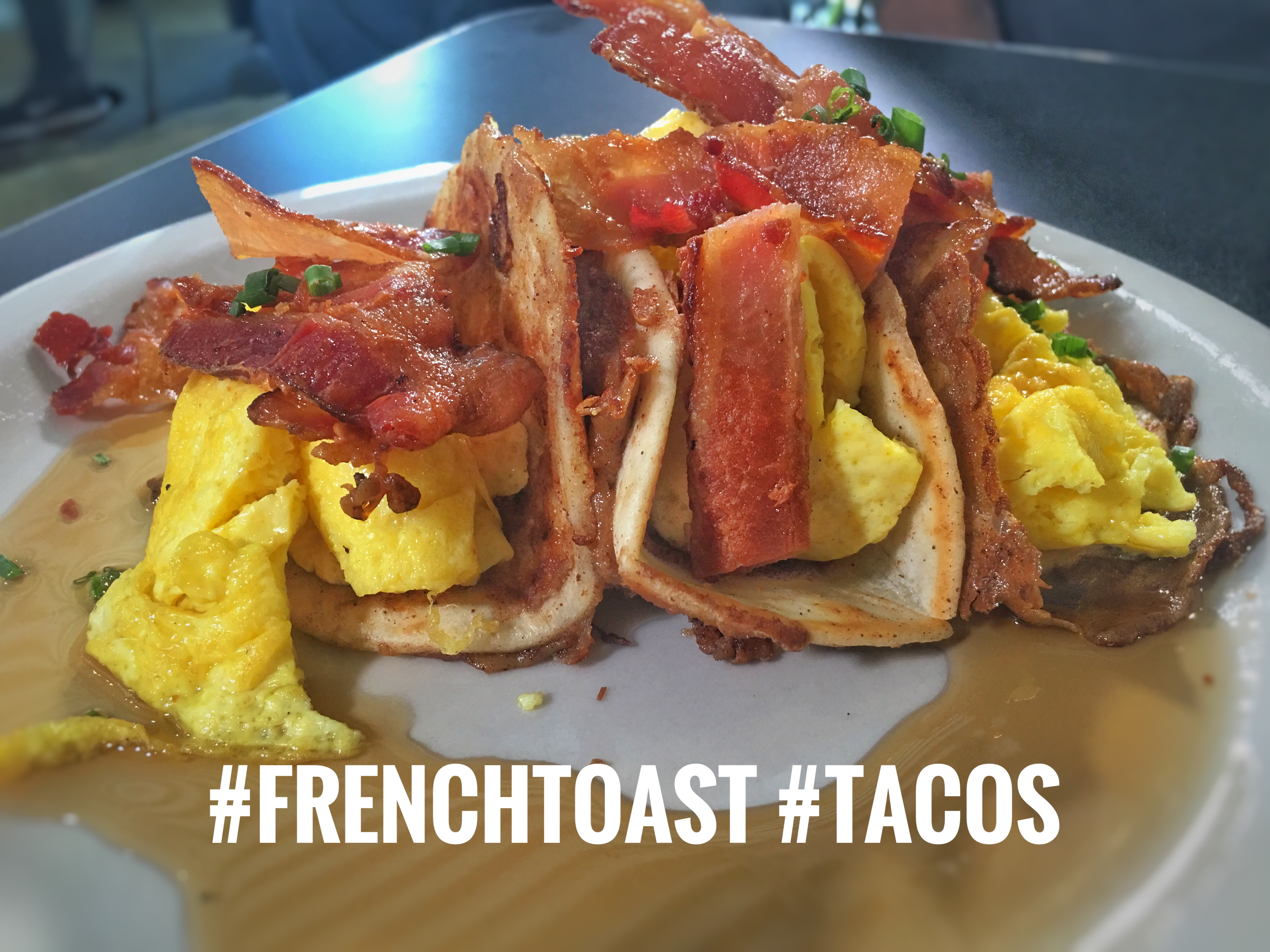 There’s a lot going in the mind of chef Anthony Sanders of Atlanta Breakfast Club. He loves breakfast and loves to experiment. He wanted to raise the bar during the early hours when he realized most chefs weren’t bringing their A game. When it came to the breakfast taco at Atlanta Breakfast club, he said he wanted to do something “bad ass”, merge an appetizer with hipster food and play with people’s minds. The latter is why I will always pay a little more for a meal; to experience something new that can still taste familiar and delicious. Which is exactly what you get with these French Toast Tacos. The bacon and perfectly cooked eggs are as familiar as it gets, as is the syrup that is drizzled over the plate. What is nothing short of “chef’s play” is how he turns a flour tortilla into French Toast. For starters he uses flour vs corn tortillas because the flour will adhere better to the egg wash. From there the tortilla is cooked in well browned butter and voilá, you have French Toast tacos! All in all it seems simple but it’s still complex, in fact Antony calls this “complex simplicity”: where a chef’s technique is applied to inexpensive ingredients. But all the love isn’t just for the tortillas. Anthony geeks out on eggs too. “Eggs should get the same respect as foie gras” he says and I could not agree more. And by respect I mean Chef Anthony cooks them slowly in clarified butter, a big pro move right there Cheap Eaters. If onions are the truffle of the poor, than eggs are the foie gras of the poor, and should be prepared with equal care. Complex simplicity at breakfast, and yeah, I’ll pay a little more for that anytime. 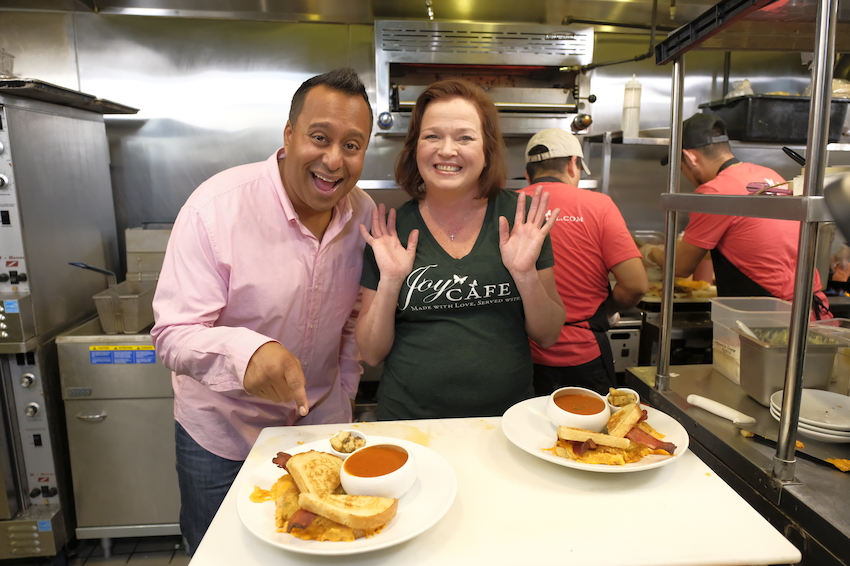 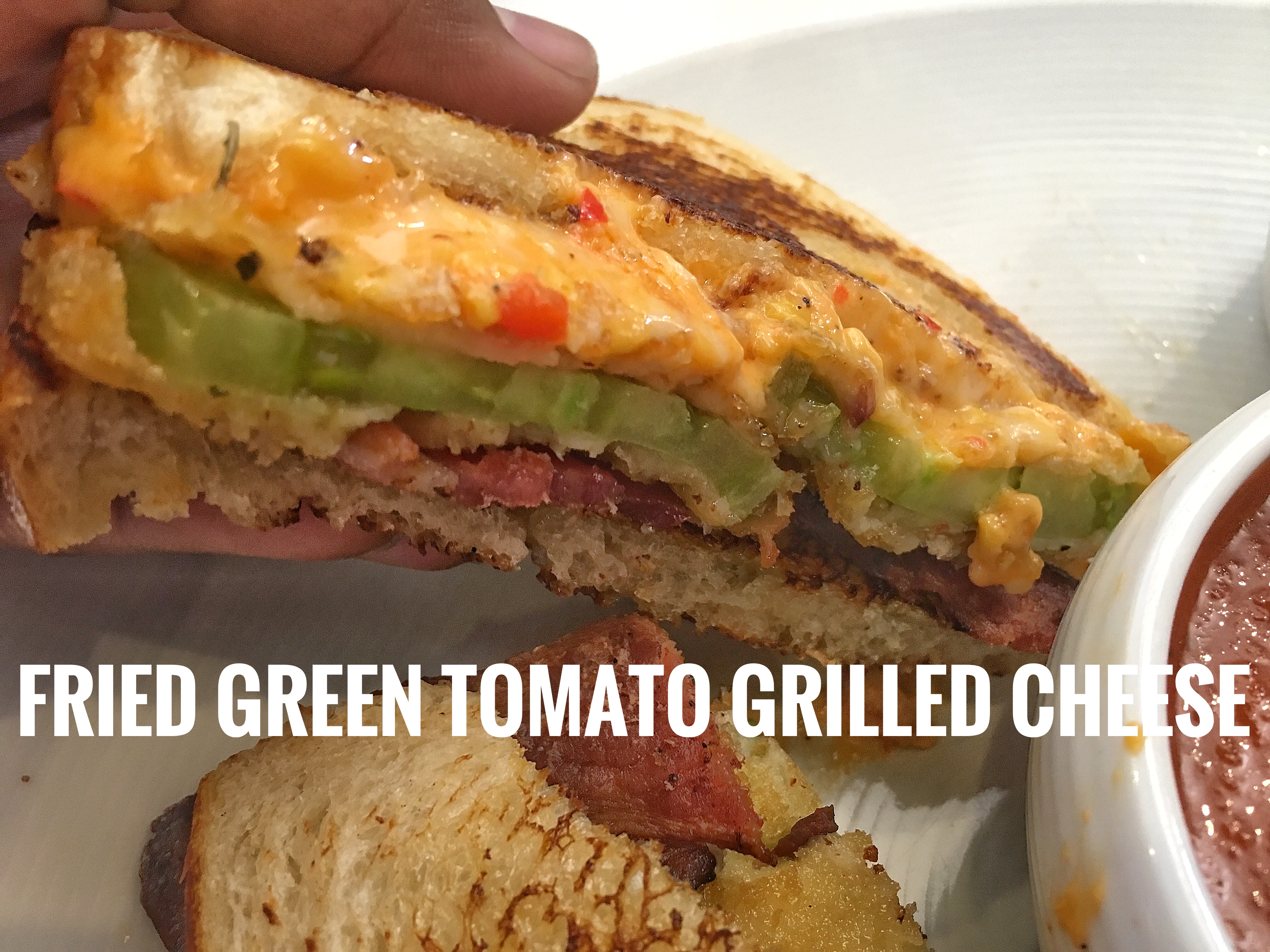 The Vitals:
the spot: Joy Cafe 1100 Peachtree st NE ste 110 Atlanta, GA 30309
the eats: Southern Grilled Cheese
the bucks: $10.50
the full nelson: Fried Green Tomato Pimento Grilled Cheese. And there is bacon. And a side of tomato soup. Your cravings are about to end

If one hears the words “Southern” and “cheese” one should assume pimento cheese is what is about to hit your plate and palate. Yes, the caviar of the South is certainly ubiquitous ’round these parts, even on grilled cheese sandwiches. I suppose if you are at the Master’s tournament where plain old pimento cheese sandwiches are worshipped, you dive right in along with the stiff upper lip crowd. But if you’re not in possession of an emerald blazer, the combo of cheese, pimento olives and mayonnaise may be a bit of an acquired taste. Look, I know the South is all about stick to your ribs kind of foods but this right here is beyond the realm of biscuits and gravy, as far as richness goes. Which makes the Southern Grilled Cheese at Joy Cafe a kind of excellent yet still slightly over the top intro. Yes, this is a pimento grilled cheese sandwich with bacon, but the addition of fried green tomatoes introduces some much needed acidity to counter the richness of the pimento. And frankly, bacon never gets in the way, unless its on a burger. Yes the green tomatoes are fried, but it gives the sandwich great textural contrast and some structural stability. And if you look closely at the pics, you will notice perfect amounts of all ingredients have been applied. This isn’t a massive ‘n messy hoagie that’s gonna give you slip and slide on the first bite, this is a well constructed sandwich with Southern roots deeper than a Georgia pine tree. Now, as with any great grilled cheese experience, so goes the requisite tomato soup. At Joy Cafe, Chef Joy Beber uses San Marzano tomatoes, adds some basil and uses some carrot in the base. No, this ain’t no can of Campbells soup people. Rich enough to warrant a split but balanced enough to eat the whole thing in one sitting, some may balk at spending almost $11 on a grilled cheese and tomato soup. But this is no ordinary grilled cheese, this is pimento cheese, the caviar of the South. And for caviar, this is a Cheap Eats deal. 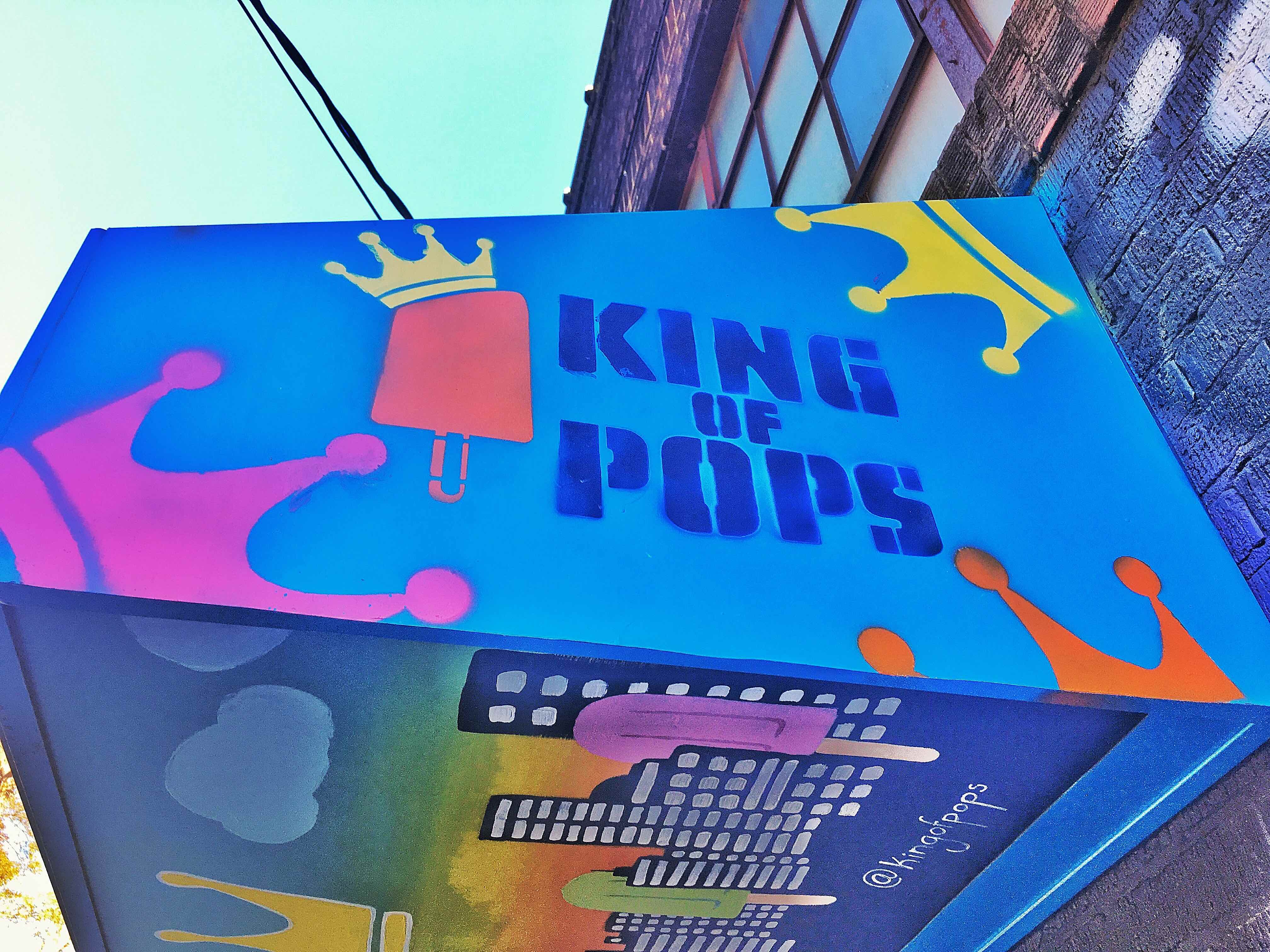 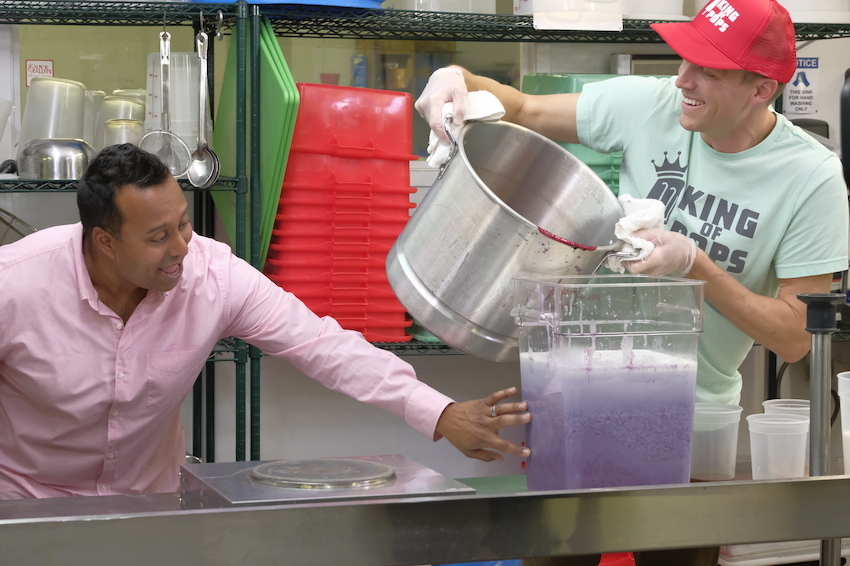 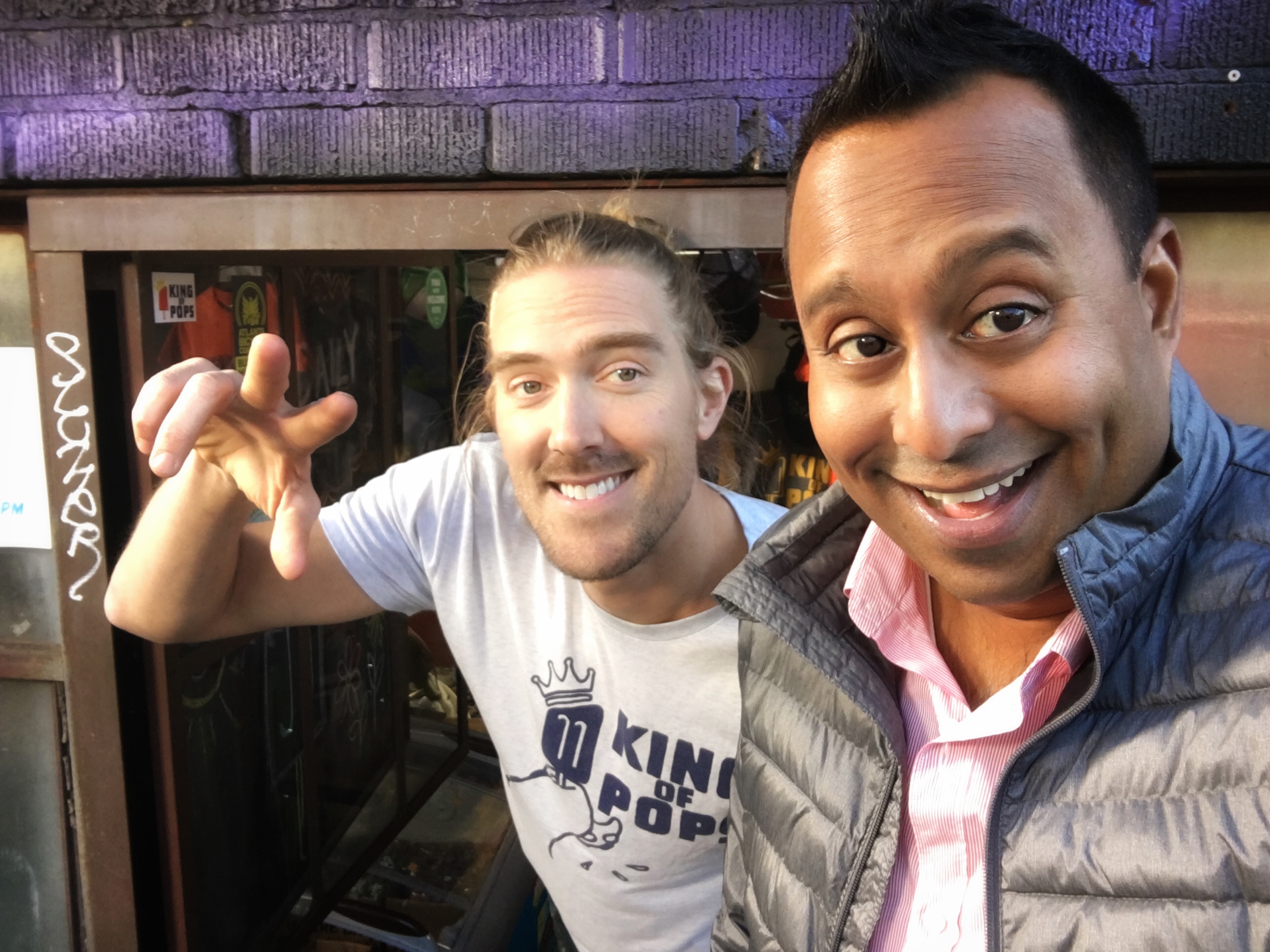 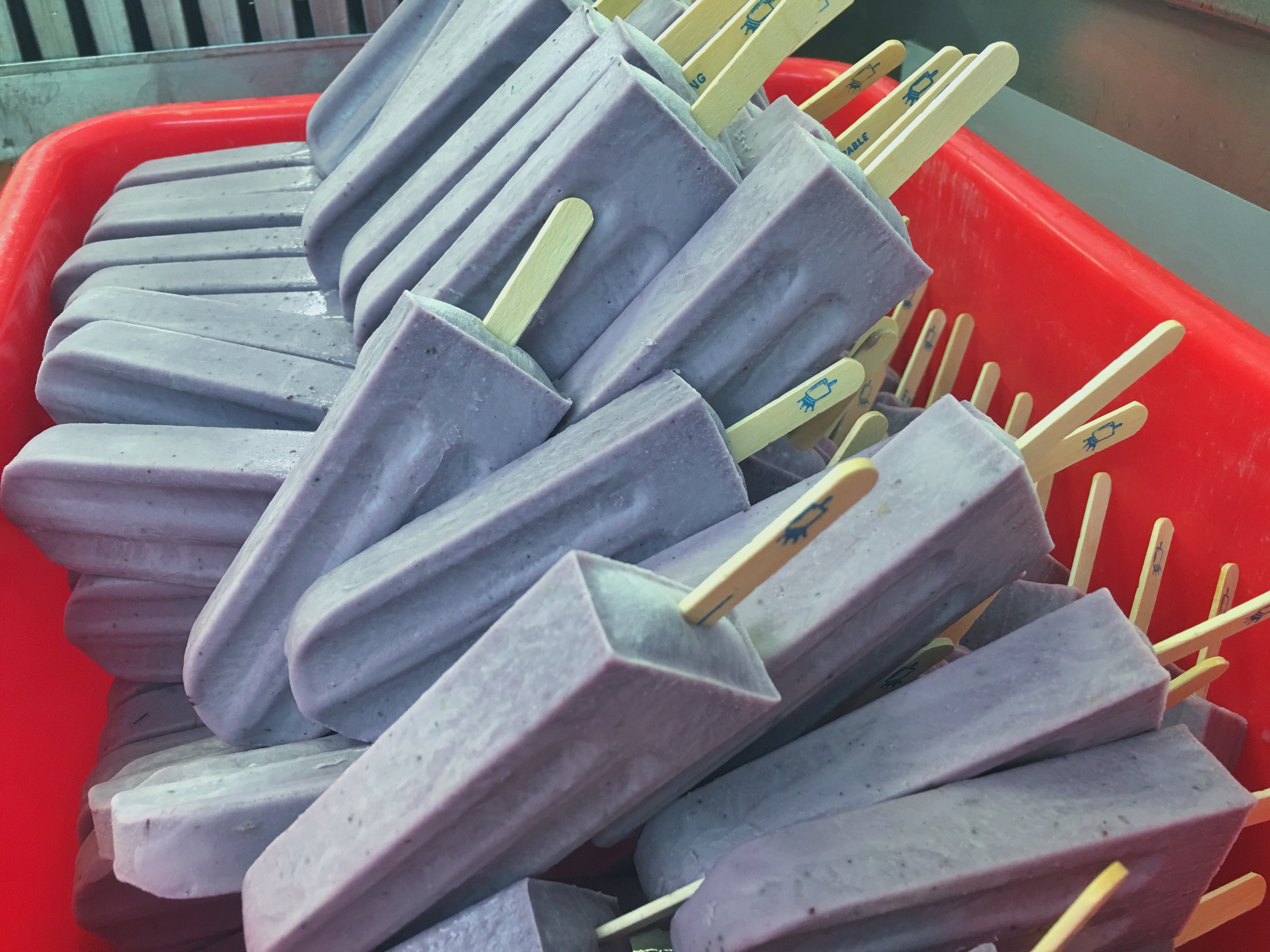 The Vitals:
the spot: King of Pops 337  Elizabeth st NE Atlanta, GA 30307
the eats: Blueberry Cobbler Pop
the bucks: $3
the full nelson: what Sprinkles did for cupcakes, King of Pops has done for popsicles

First off there are actually two Kings of Pops: brothers Steven and Nick Carse, who while visiting another brother down in South America fell for Paletas; a healthier version of popsicles that are huge in Latin America. And they aren’t the only ones who fell for paletas; I remember nibbling on more than my fair share in the streets of Los Angeles back when I called LaLa land home. Once you bite into a paleta, or a pop at King of Pops, you will instantly know the difference. Specifically to the tune of real fruit and the absence of sweeteners, along with more interesting flavor combinations like habanero and mango or in the case of King of Pops: blueberries, milk, cinnamon, cloves and vanilla. I don’t know about you, but I definitely made popsicles at home back in the day. All it takes is a mold, a freezer and your imagination. I never got past using Capri-Sun or Hi-C. If I did, maybe I would have come up with a combo of blueberry meets cool Autumn day pie with a creamy richness that made the entire pop experience come off slightly latte-ish. For $3 you really can’t go wrong, not for a pop fit for a King. Or two Kings even. 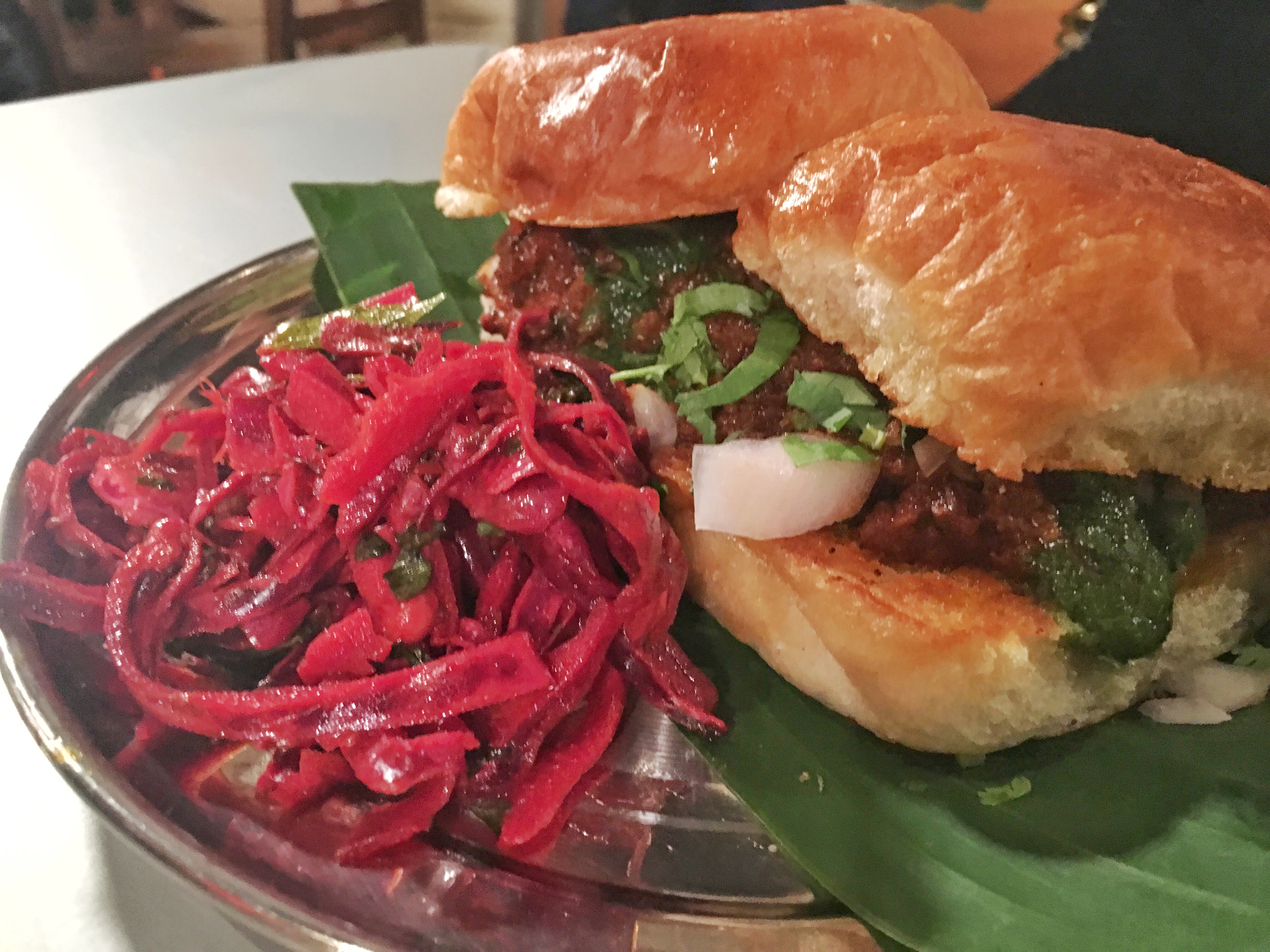 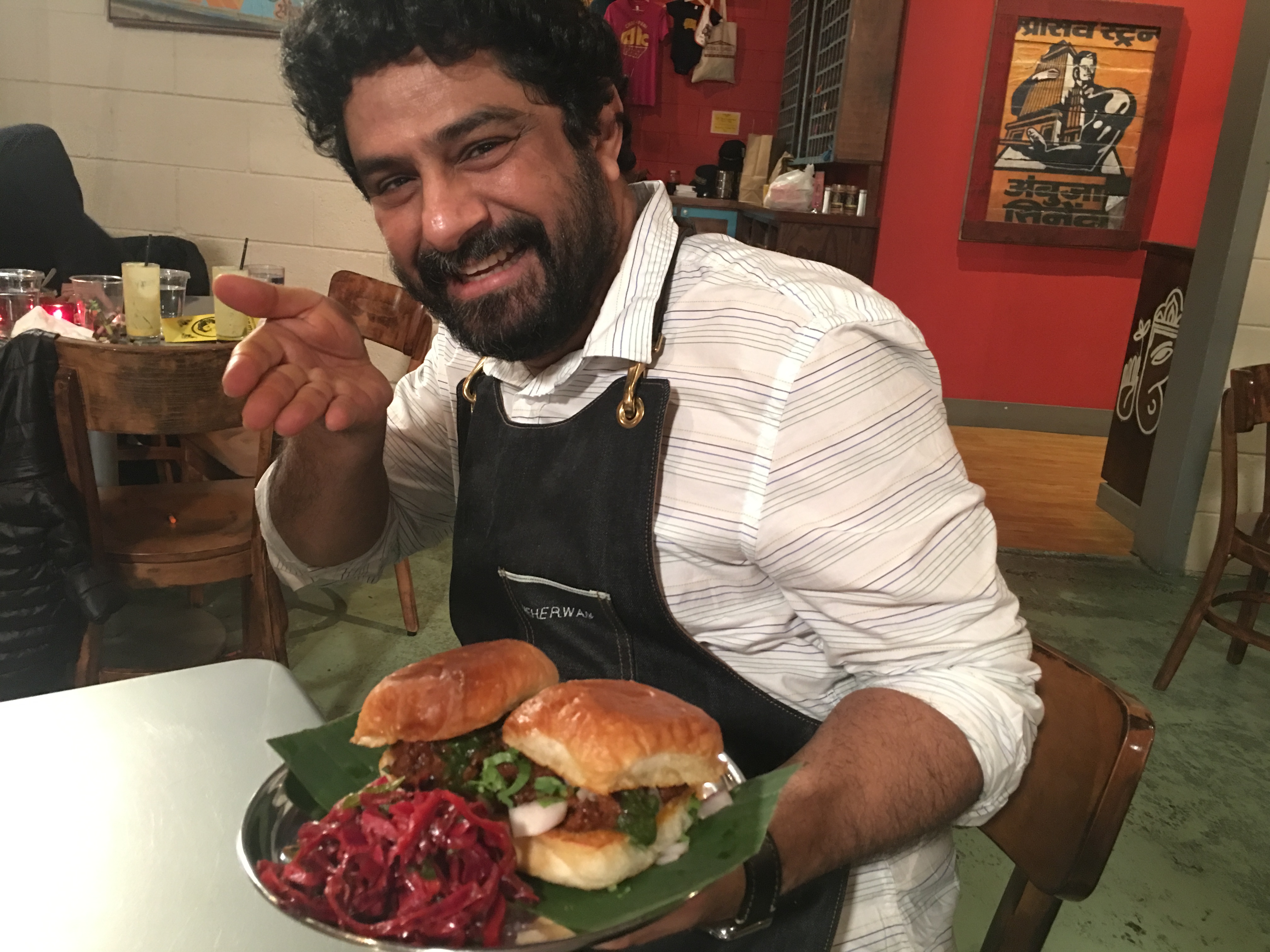 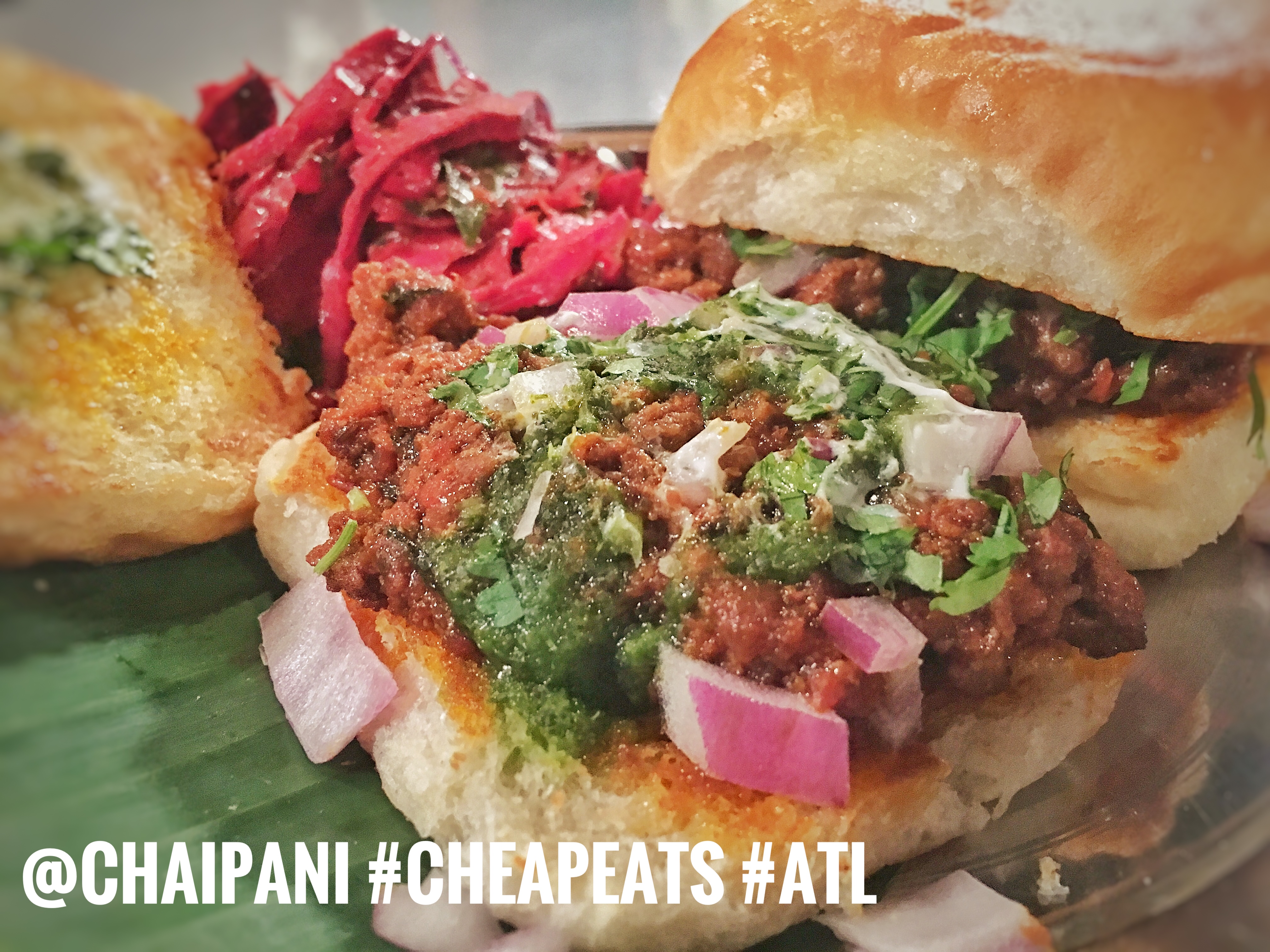 Chef Meherwan Irani is my brother from another mother and what he and his partners are doing with reinventing what it means to dine out for Indian food in the US is so desperately needed, I should be doing it myself. First off let’s just get a basic rundown of what it means to dine at Indian restaurant in America in 2018. First off, chances are you aren’t even dining inside the restaurant because like Thai, Chinese and Pho restaurants, we often eat this food to go or have it delivered, so not much detail is put into these dining rooms. There are exceptions but when it comes to Indian, too few and far between my friends. Next let’s look at the menu. Broken down my appetizer, animal protein and vegetable entrée, naan and rice, there will be a section devoted to items cooked in the tandoor(the oven where you get naan and chicken tikka) and the curries will go something like “curry, vindaloo, tikka masala, rogan josh, and saag.  If you’re lucky you will see a dessert section and a goat biriyani. And that’s like 90% of every Indian restaurant in America. Not a bad thing but c’mon, how about a little more variety for a country with four times the population of the United States? Then there is Chai Pani, with its über hip interior and menu focused on Indian street food which is almost an entire sub genre of Indian cuisine. Like Italian food, India has regions where culinary traditions stand in stark contrast to one another. On the west coast in Goa, where Portuguese colonists set up shop, you will see a myriad of seafood dishes and even pork, something you would never find in East Bengal(where my peeps hail from). Indian street food is  a bit different. A cuisine that has evolved with modern city life in India, street food often crosses lines on the map the way people in India do in search for work. The result is an eclectic mix of food meant to cooked and consumed quickly, food that is fast but a far cry from Taco Bell and KFC; both of which have made a footprint in modern India I might add. There is plenty to choose from on the menu at Chai Pani, but being a Bengali Midwesterner, I was instantly drawn to the Sloppy Jai, which while resembling a sloppy joe, in fact predates the dish by around five centuries. Basically it is dish called Keema; ground meat(in this case lamb) cooked with Indian spices; not quite a curry but the rendered fat becomes a bit of a sauce. Now I grew up on Keema but we had it over rice, never on bread. Well back in the day, when Portuguese colonists were in India, they introduced a bread called Pau which is basically like a Hawaiian Sweet Roll(go figure the Portuguese were there too) and they put Keema on the Pau bread. Basically the OG sloppy joe but frankly, Manwich tastes like water compared to Meherwan’s spice blend. And since we are talking spices, here is one important fact: when cooking with spices remember that they go stale quicker than you think. Like that ground cinnamon in your spice rack? It’s basically dead compared to getting a fresh cinnamon stick, toasting it and grating it. But that’s not to say whole spices can’t go stale too – they can. Which is why Meherwan imports his spices himself from India. My director kept going off about the intense aroma in the kitchen while we cooked the Sloppy Jai. Of course, growing up with South Asian parents, I knew the aroma all too well. Especially the next day when your clothes reek of cumin. Which of course ours did, but so worth it. If there is one place this season on Cheap Eats we went to that is truly doing something unique, and much needed as far as the American dining scene is concerned, then it is Chai Pani. This wasn’t just a Cheap Eats score, or even a gem in Atlanta, this is the future of Indian dining in America. And if that is the case, the future is bright my friends. 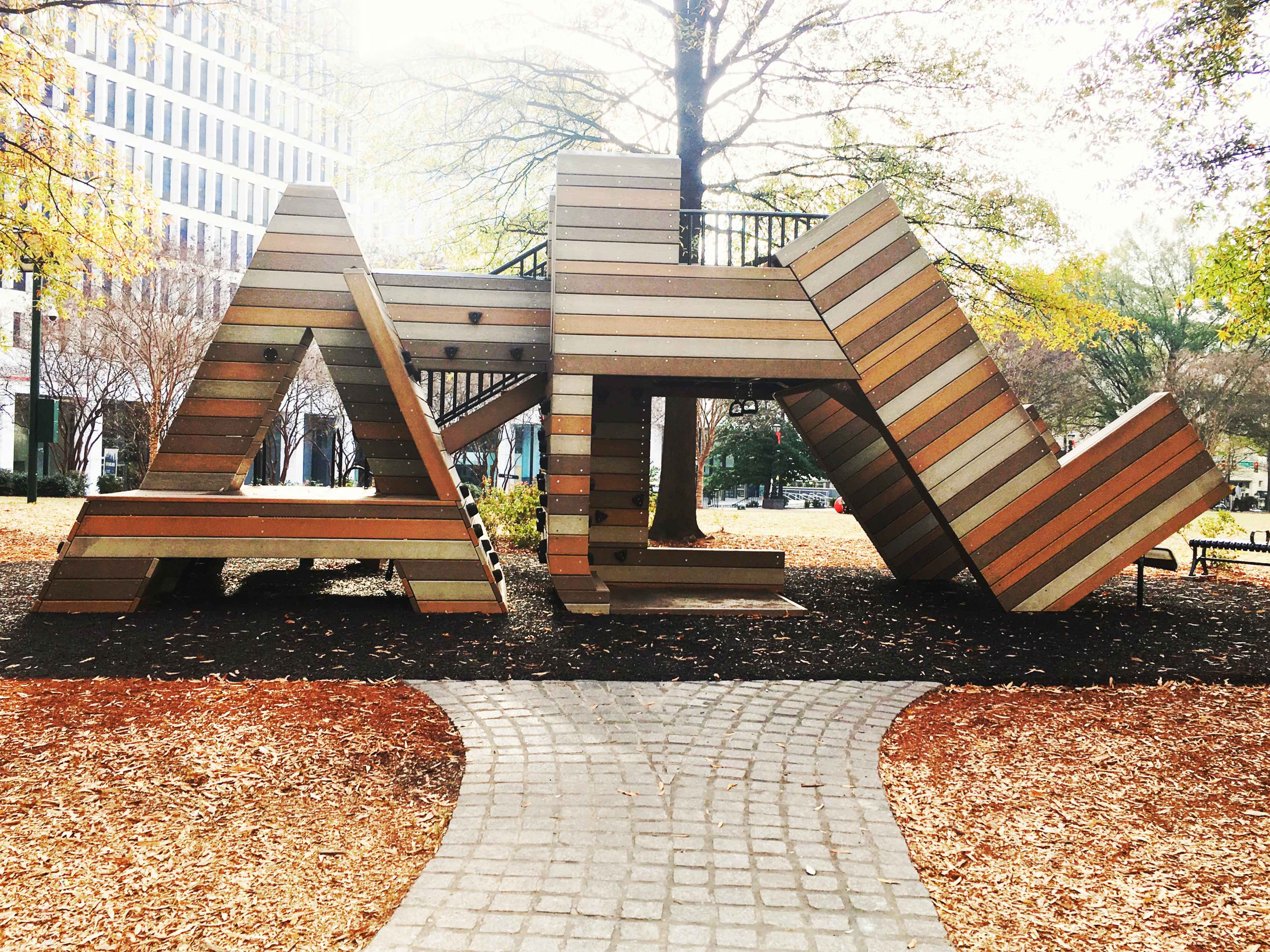 And that was Cheap Eats in the ATL! A city I absolutely adored: diverse, thriving and reminiscent of my old stomping grounds of Los Angeles. The great food never stopped coming. If you peak back at older posts you will find plenty of burgers covered here and be on the look out for my coverage of the food halls here plus a big taste of some serious Vietnamese cheap eats along Atlanta’s iconic Buford Highway.

Until next time my friends . . . happy Cheap Eats hunting!