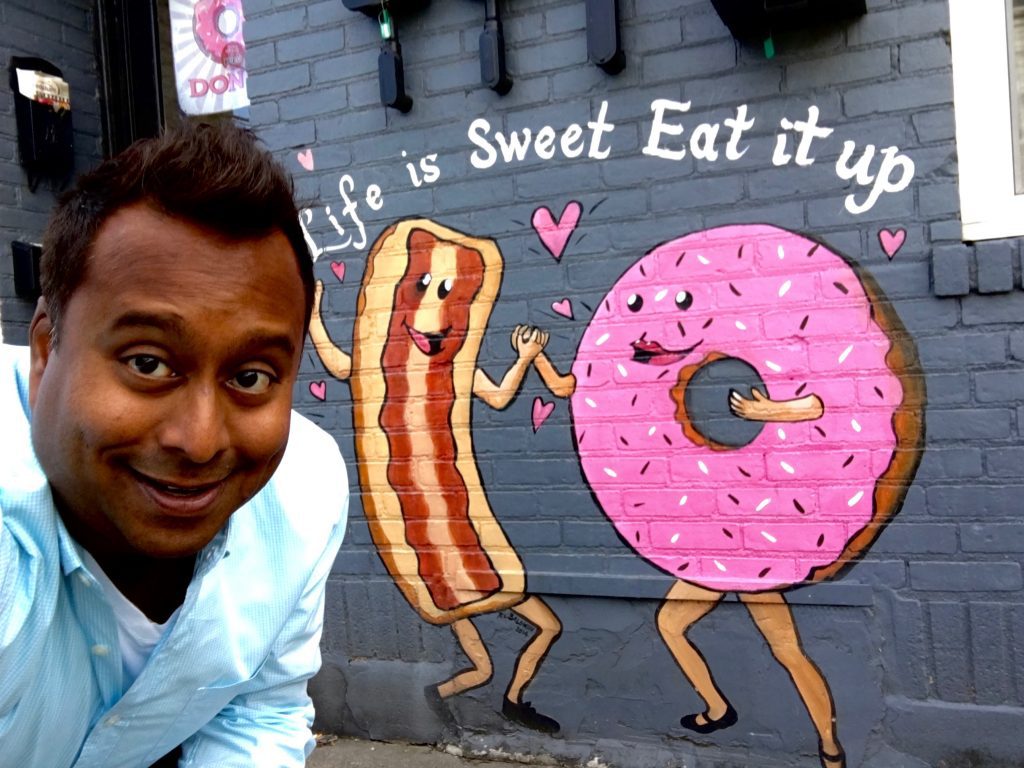 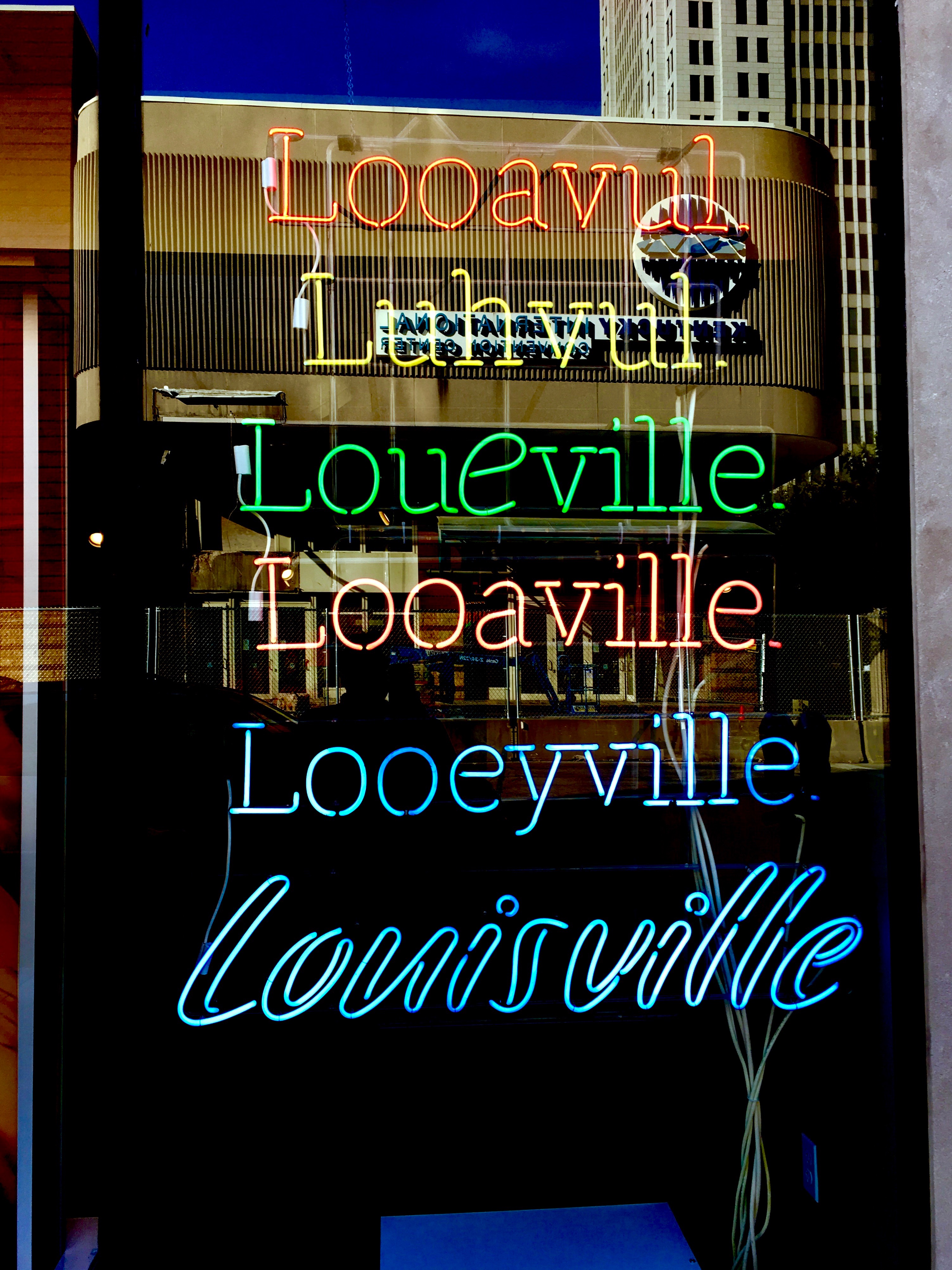 So how do you say it? I went with version one, the one with the drawl, and it earned me more than a few nods of approval. Invoking that drawl also reminds you that Louisville is a little bit Southern. As Baltimore straddles a line on the cultural map of the East Coast and the South, so does Louisville, with the South and the Midwest. This city might surprise you with a diverse set of famous former residents like Hunter S. Thompson and Muhammad Ali, Thomas Edison and even Tom Cruise. You probably know about the whole horse racing thing and the bourbon. And you probably could have guessed that both have been an integral part of Louisville’s history and identity for well over 230 years. Point is you have heard of Louisville but do you know what’s going on with the food here? First off, they got some food history, the most notable IMO being the Kentucky Hot Brown and yeah we found one fit for the Cheap Eats Budget. This is a city that has more than a few nearby farms. And beyond that solid farm to table showing is a grip of talented chefs who are having fun with food. And on that note let’s start off with the most fun breakfast we have found to date: 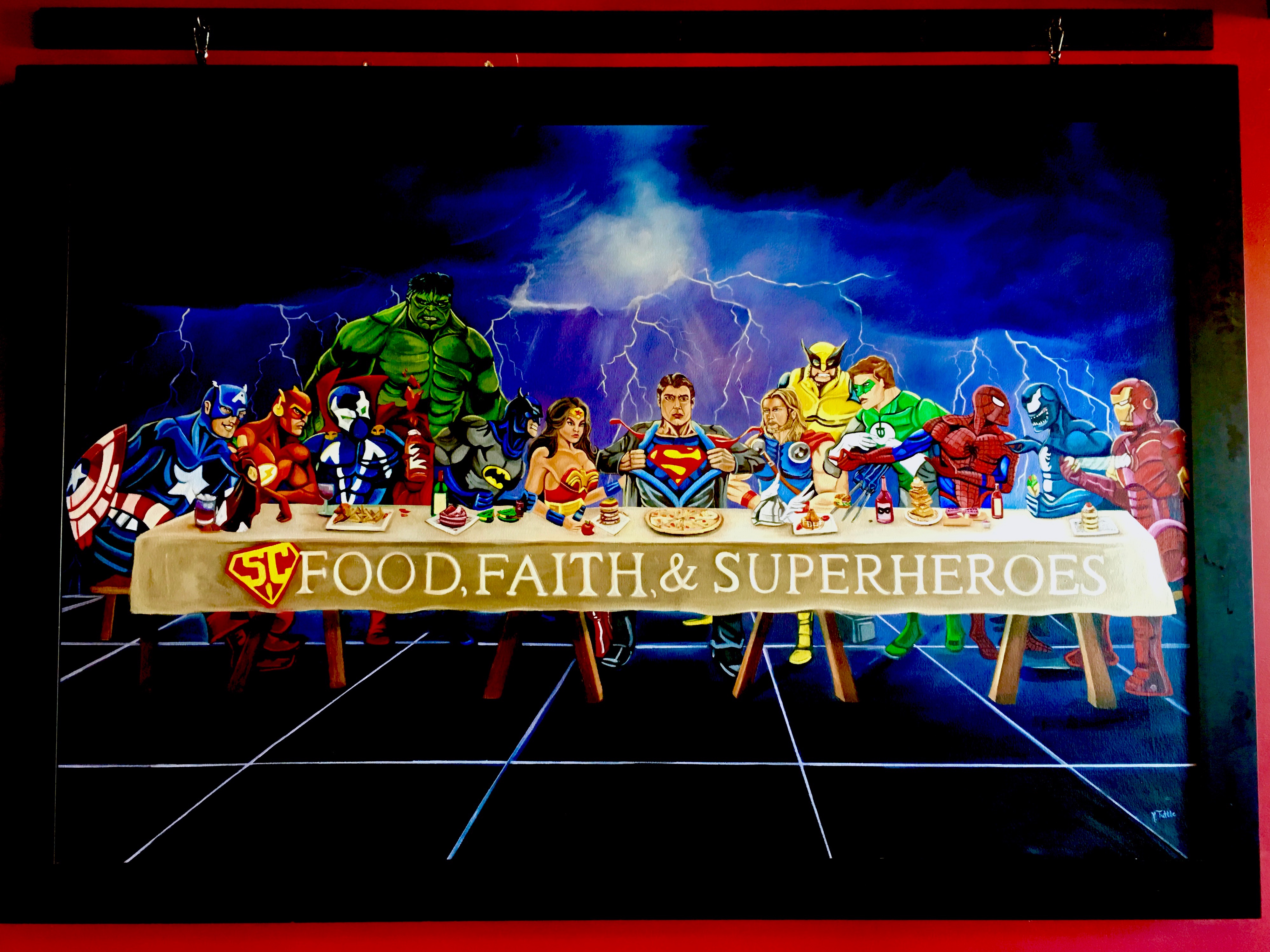 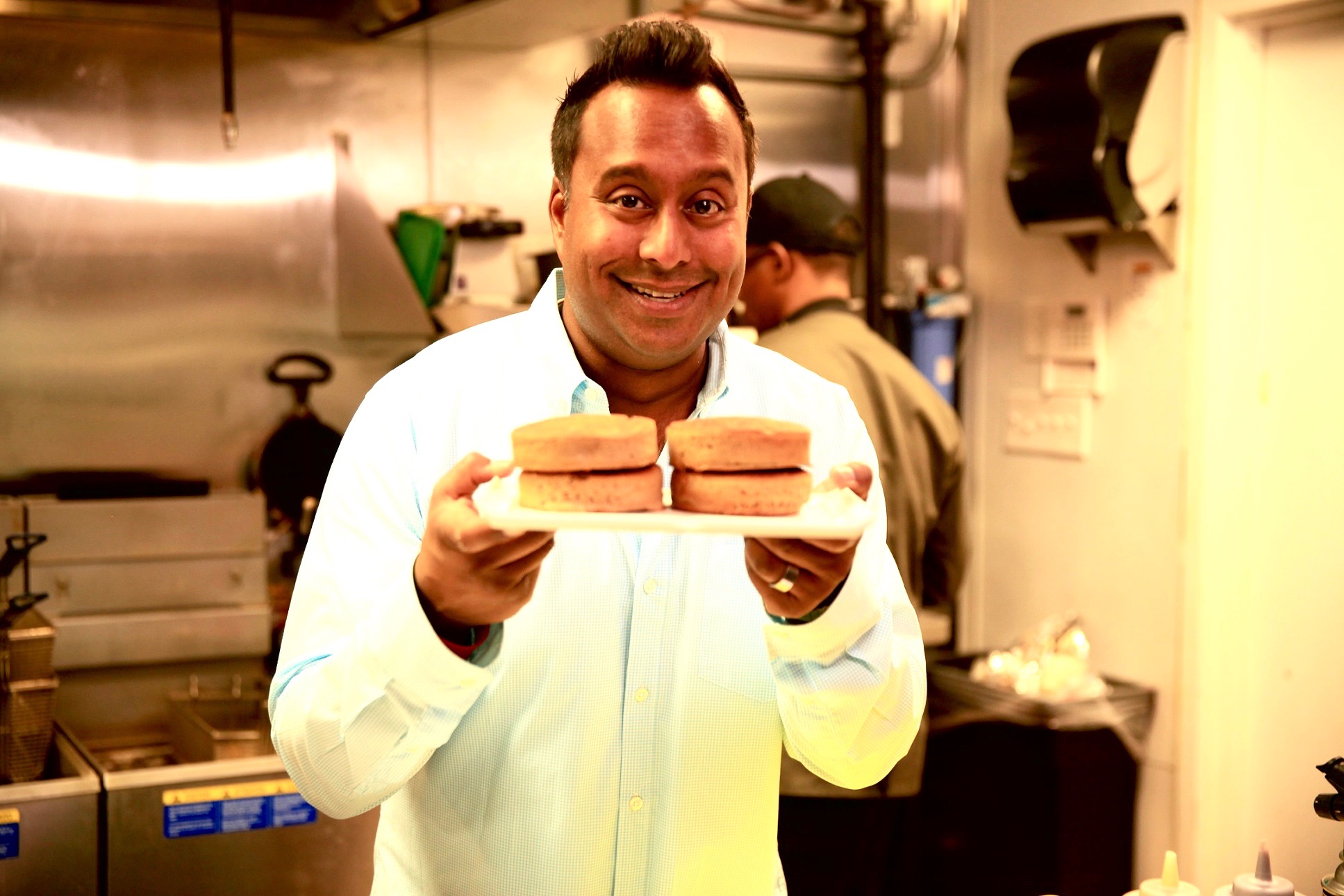 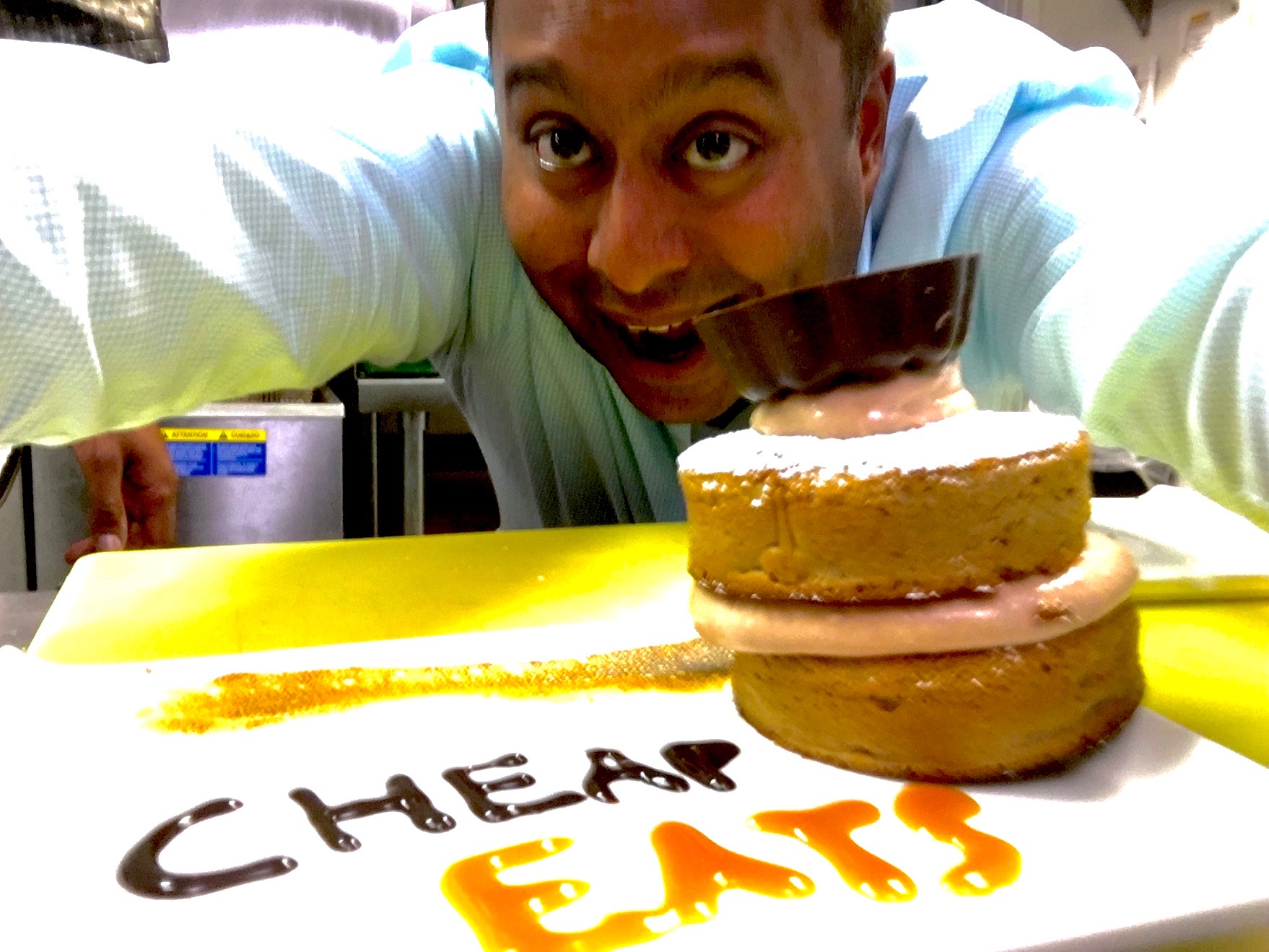 The Vitals:
the spot: Super Chefs 1702 Bardstown Road Louisville KY 40205
the eats:  1/2 order Liu Kang Hot Chocolate Pancakes
the bucks: $7
the full nelson: You can be serious about food without having to be serious

Darnell Ferguson is the type of chef I root for. Someone whose passion has taken him from humble beginnings in Columbus, Ohio all the way to the Olympics in Beijing and scored some stage time on the Rachel Ray Show too. For a young man, Darnell has an understanding of food that rivals chefs twice his age. A two minute glance into his restaurant and menu will tell you that he strives to make food approachable but that doesn’t mean it’s too simple either. Case in point: the Liu Kang/Hot Chocolate Pancakes. Set the Mortal Kombat reference aside and you will still crack a smile with pancakes that utilize chocolate mousse, a creme brûlée torch and powdered hot chocolate. This isn’t the first time you or I have seen dessert transformed into breakfast but it does rank high as a contender for the most fun way to serve chocolate mousse ever: in the morning with pancakes. The super hero theme connects more to Darnell’s work ethic, talents and good attitude for looking beyond the negative so that he can strive for the positive. For me, those comic book characters and the countless ways he can incorporate chocolate into breakfast, remind me of the Saturday Mornings of my youth. For $7, these pancakes are easily a Cheap Eats score but the money you save is a distant second when compared to the fun atmosphere you take part in when dining at Super Chefs. Its a wonderful thing when you get to see a good person living out his dream. It isn’t just breakfast on a budget, its Cheap Eats for the soul. 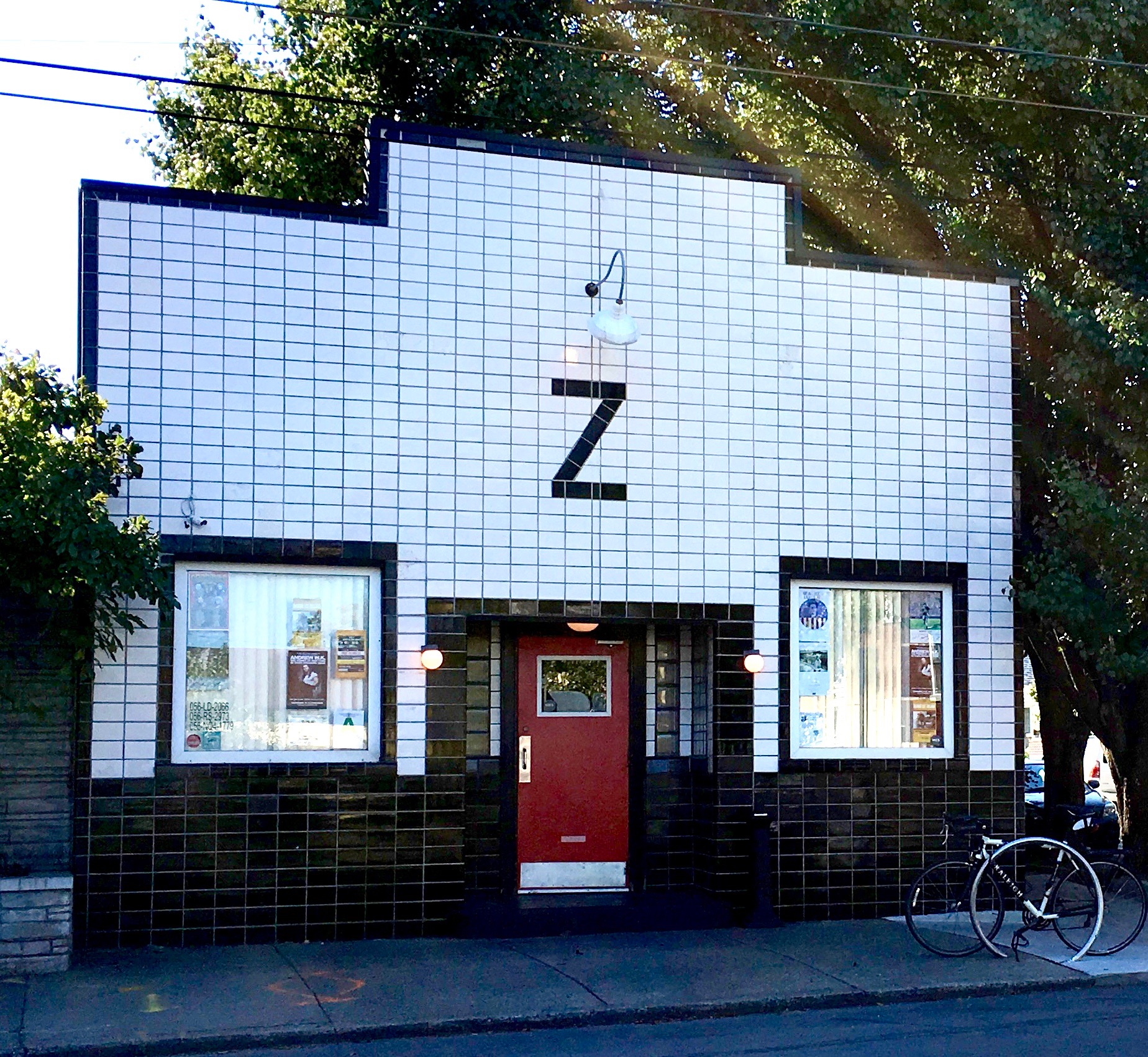 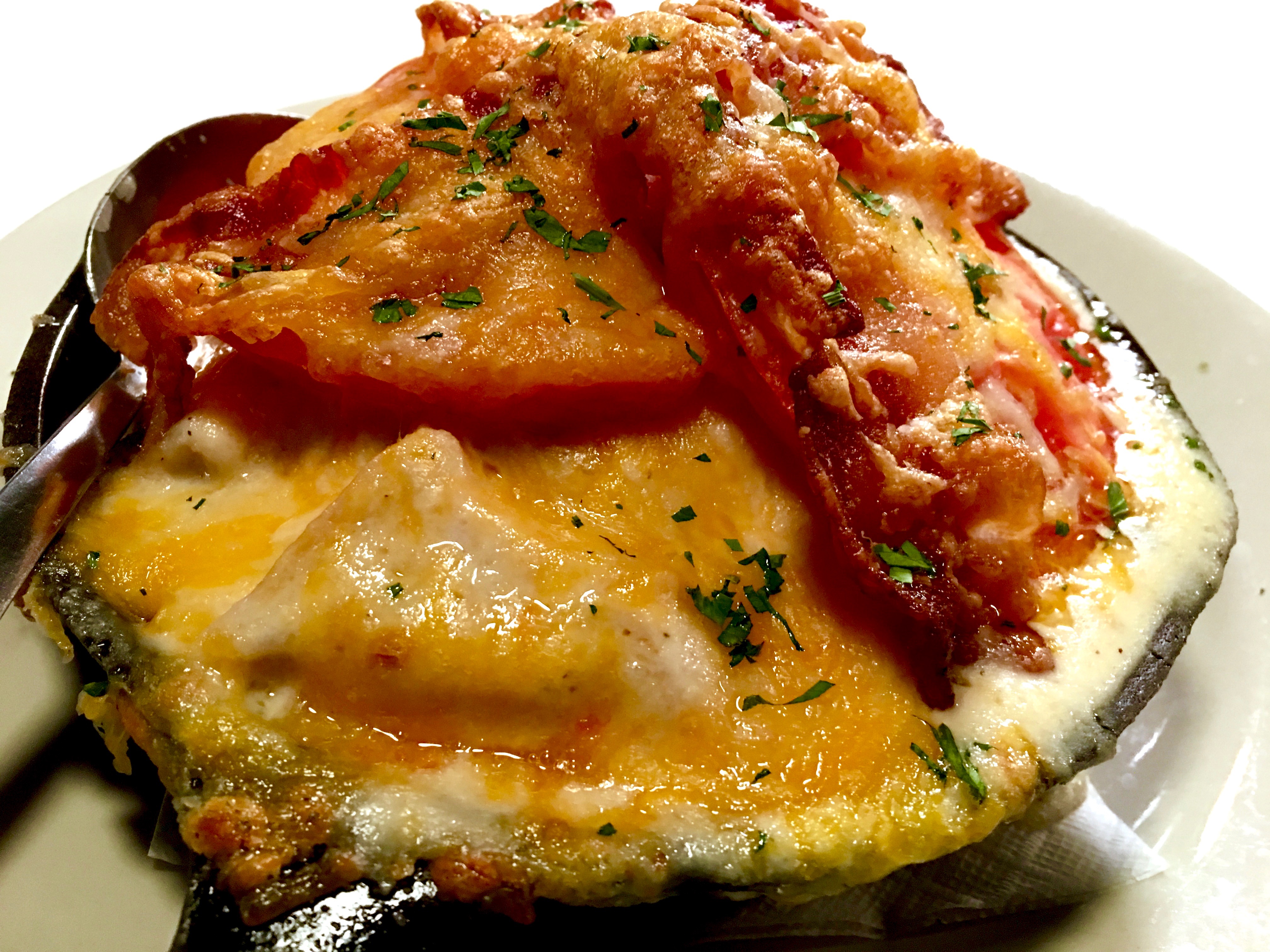 So the Hot Brown is the most famous dish in Louisville or so the internet says. What I do know is that as soon as I saw one on TV (yes, a food show), I knew I was going to have one someday. Like with any classic dish it is good to start with the classic version. I didn’t. The version I tried at Zanzabar deviates from the original by swapping out Mornay sauce with a beer cheese sauce, and we have Chef Noelle Prignano to thank for that. It is timely that craft beer, a local one at that, is part of this classic sandwich transgression. Though it is worth noting that the overall flavor effect, whether its Mornay or beer cheese sauce is similar: the fat of the cream, the pungency of the cheese(Guryere in the classic, Parmesan in the Mata Hari) and the nutty aroma of nutmeg dominate and, to paraphrase the dude, tie the sandwich together. And frankly bacon, turkey, tomato and pretzel bread need all the unity they can get. So go in to Zanzabar knowing that the Mata Hari Hot Brown is fine for first timers and veterans alike. And just like the original, this sandwich literally oozes with old school late night indulgence. It is down right historic, and at $12, you can make use of the remaining $8 off your Andrew Jackson with an incredible collection of vintage pinball machines. Or you can get a beer that the beer sauce is made with. That’s what the internet calls #winning. 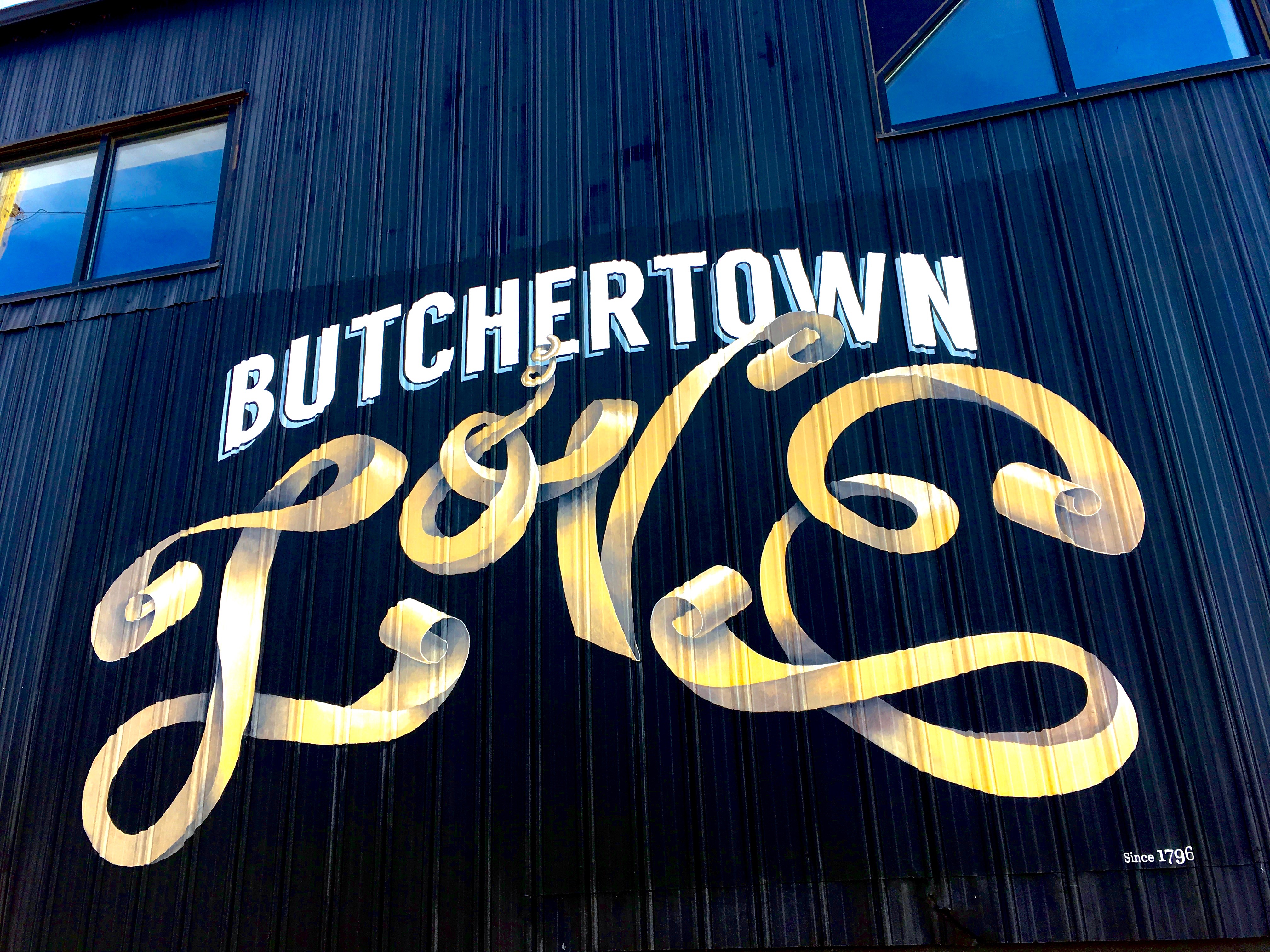 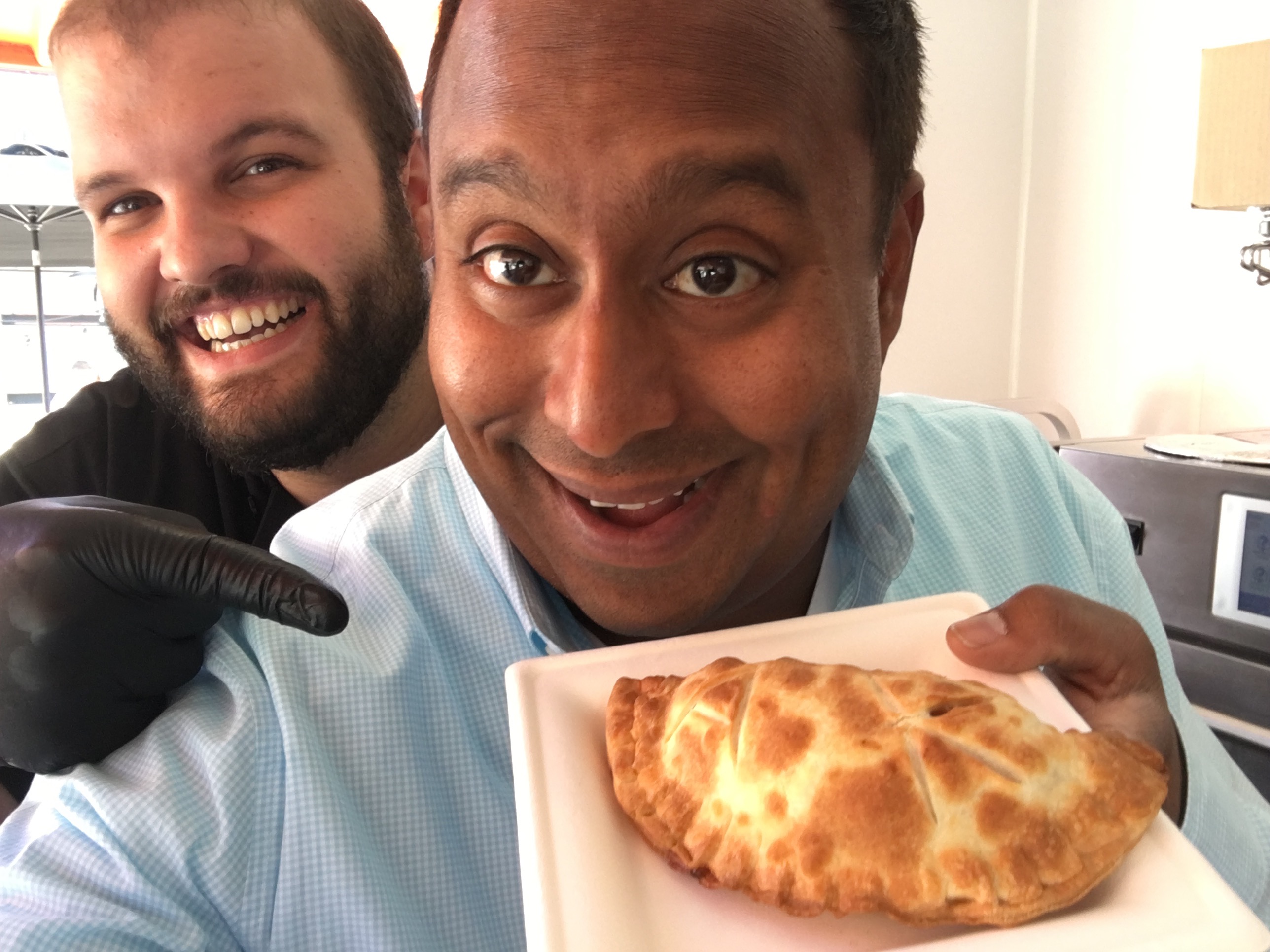 A long time ago, I was an eight year old who liked snack food. At some point this 8 year old and please feel free to conjure up a portly Ali pointing at an aisle in a grocery store, made the move and got his first hand pie. It was some prepackaged affair with promises of chocolate pudding inside. It sucked. Fast forward to 2016(at the time of shooting) and here I am facing up to some snack demons with far better results: a hand held, no spoons necessary, apple pie that evokes enough flavors and memories of the Fall to make me want to rake leaves. Butchertown Pie Company has a gang of pies: there’s the shifty Polynesian Al Pastor(BBQ Mexican Pork), the charlatan Channa Masala(curried garbanzo beans) and finally the Colcannon, an Irish hand pie that features potatoes, bacon, and leek among  other things and is rumored to have connections to the Southie Projects of Boston. Ok, so maybe my gang of pie analogy/bit went too far but you see they have plenty of savory versions as well. And they fall in the $5-$6 range – where Cheap Eats snacks thrive. How can they afford to sell these pies for such an affordable price? They have cut out the cutlery. Hand Held pies might be a South African food tradition but eating with your hands is always a welcomed custom in my Cheap Eats world. 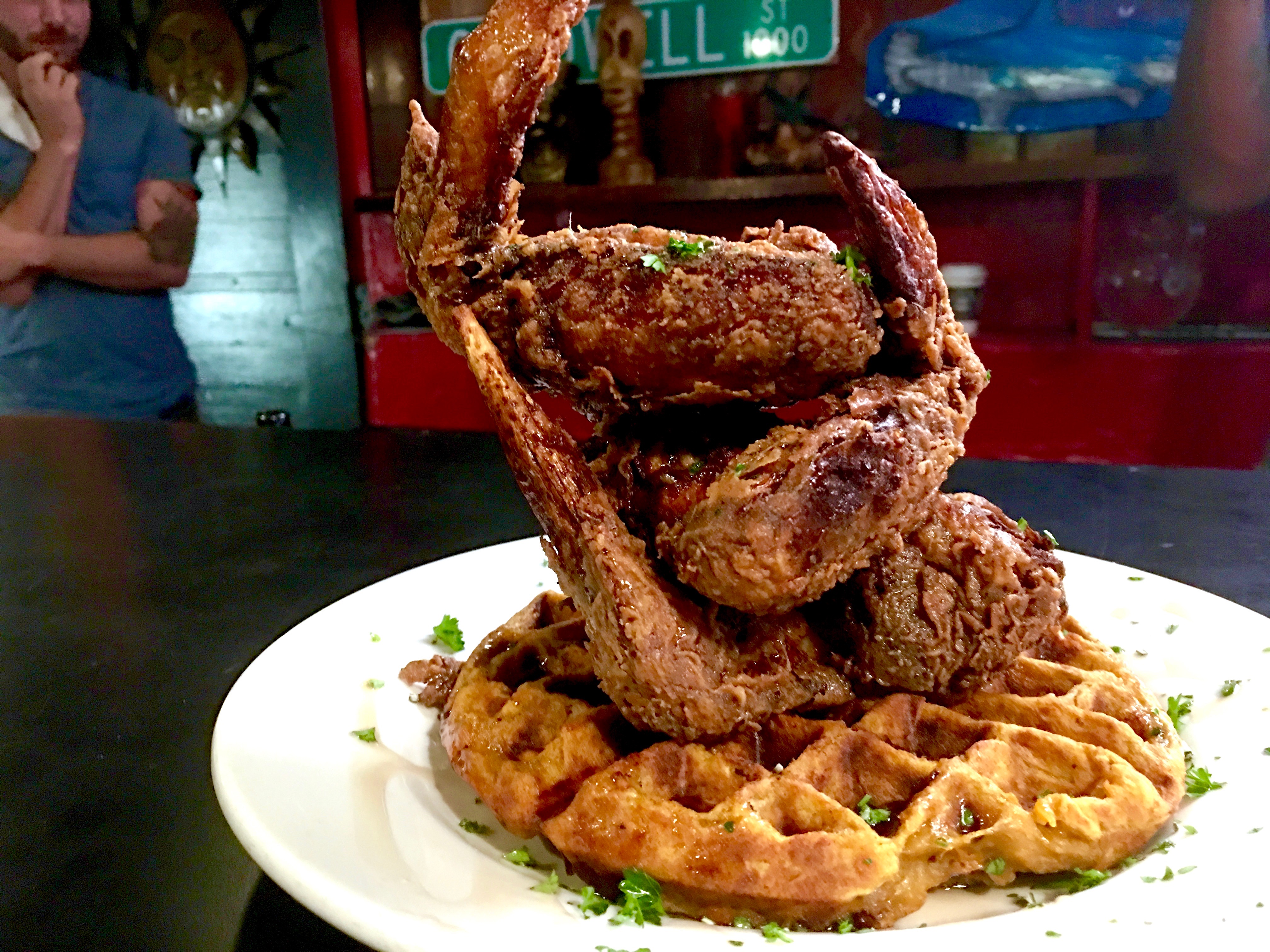 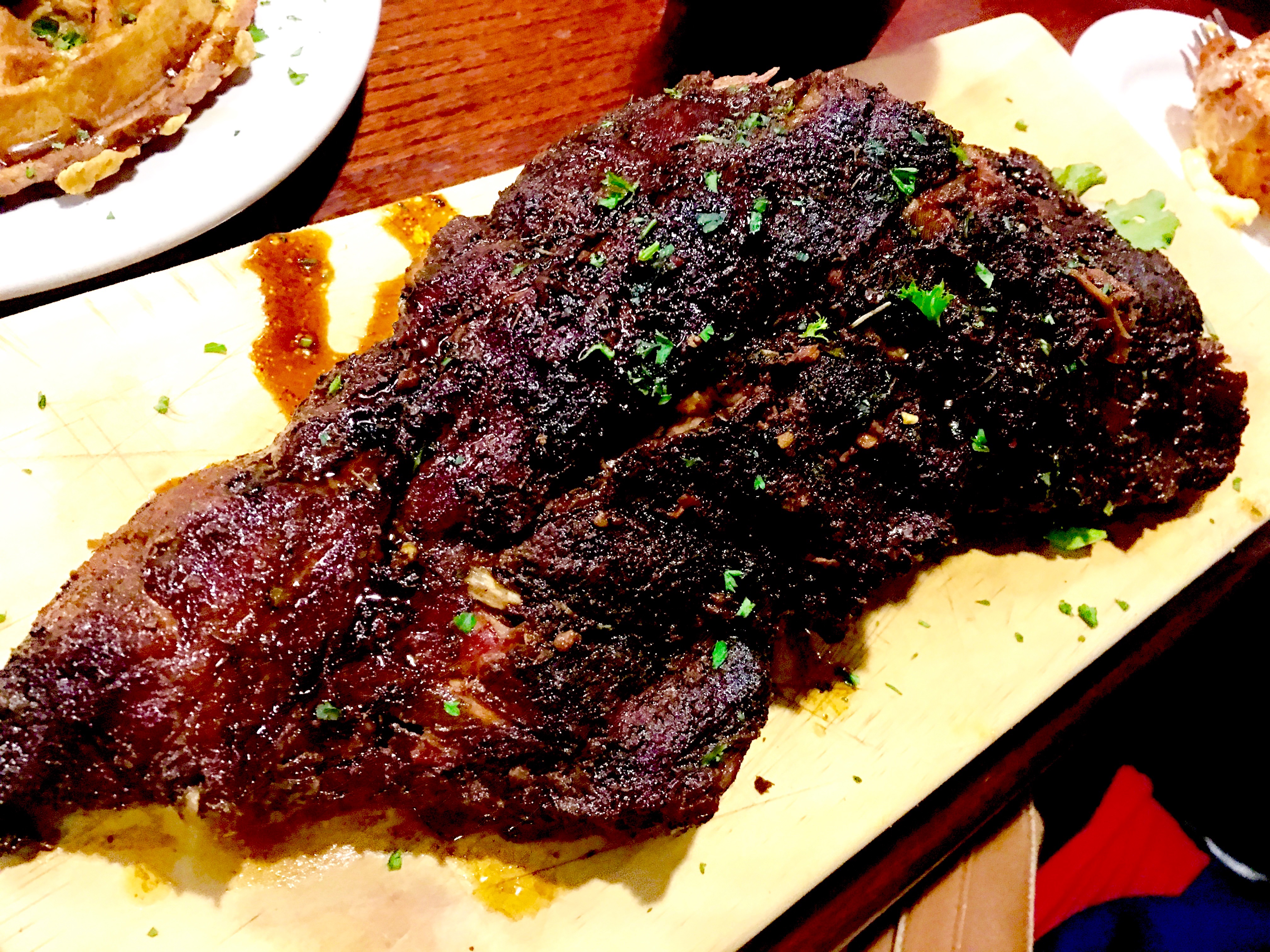 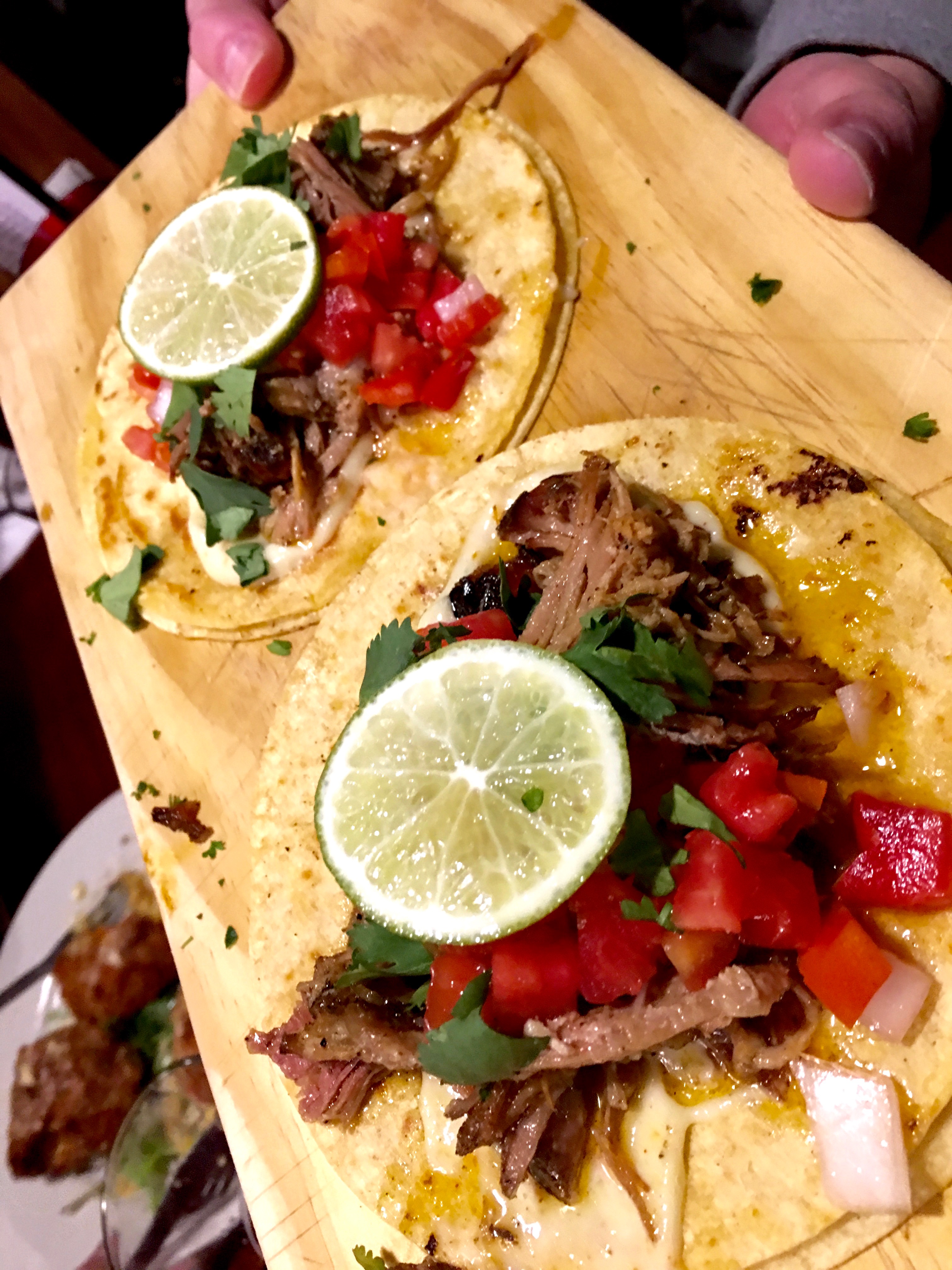 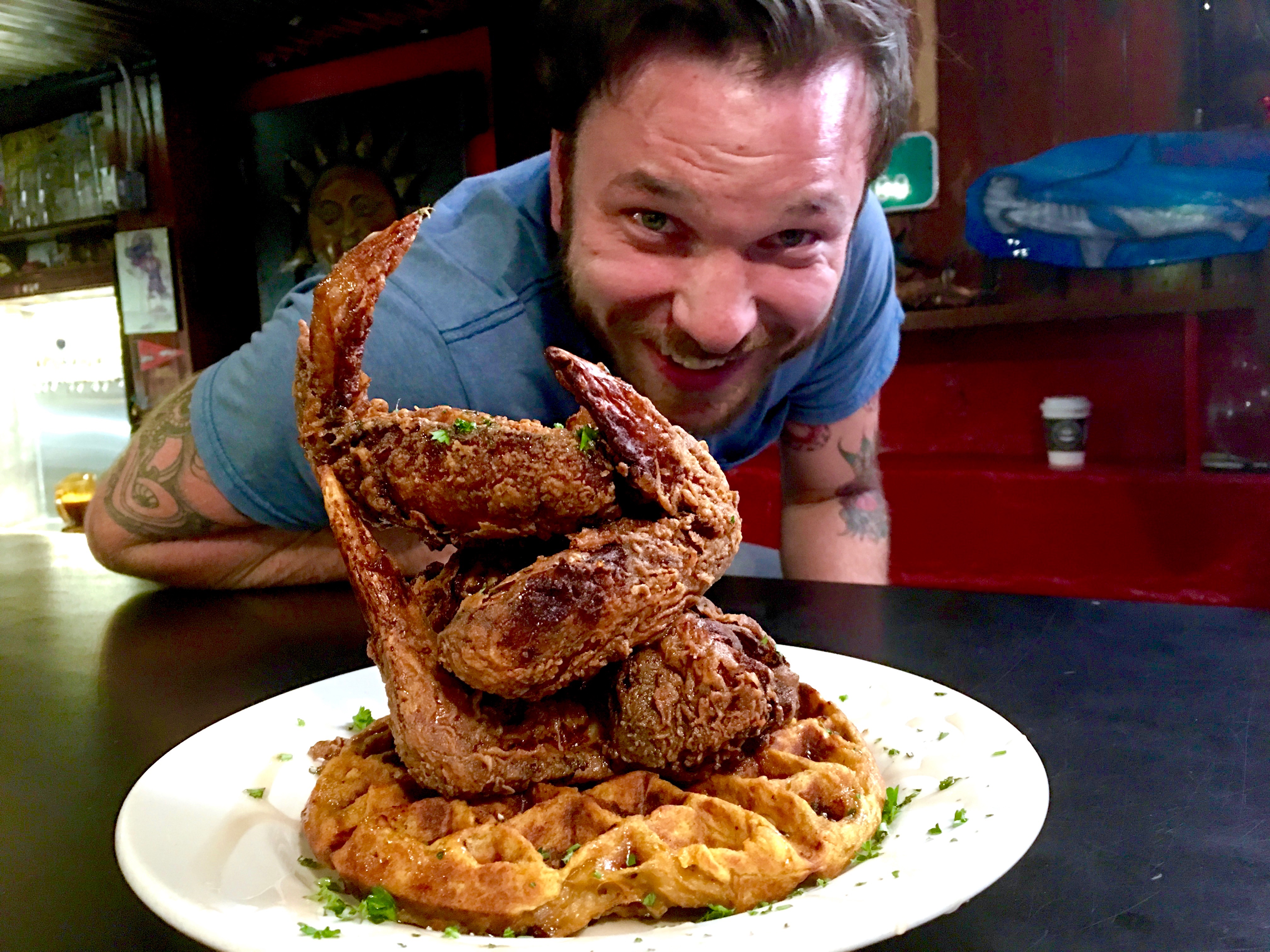 The Vitals:
the spot: Hammerheads 921 Swan Street Louisville KY 40204
the eats:  Chicken and Waffle, really though you can get everything
the bucks: $13
the full nelson: The jack of all trades that is the future of food specialization

If you would have told me a year ago that there is a place in Louisville that is doing fried chicken, elk burgers, tacos and ribs all equally well, I would have dismissed it as crazy talk. Not possible talk. The whole point of our great food renaissance is that we recognize the power of specialization. Well Hammerheads does it all. They are taking specialization to new levels and that is mostly because of Adam Buress, Hammerheads’ chef and a true food hero. When I first spoke with the dude he was going off on the quality meats he sources from local farms for his smoker and then talked about his vegan diet he had begun months earlier. In a time where it seems like all we see is that which divides us, a chef living a vegan diet is also doing farm to table barbecue, and doing it well. And doing tacos well. And doing wild game burgers well. You know the fried chicken was legit since I broke my budget to get it. I could tell you how they have Migo and Game, one a dedicated taco/latin small plates joint and the other a wild game burger concept as well as the OG Hammerheads, but what I think is far more important is what these guys will do next, and that is something I can only guess at. I hypothesize that they will perhaps jump onto the Filipino bandwagon but will inevitably stamp their brand of carefully sourced ingredients with a comfort driven chef’s vision. Whatever it is, the final product will impress me and that is something you inevitably will pay for. Hammerheads broke my budget but did so with remarkable quality influencing the overall decision of value. Dear Cheap Eaters, I do believe foods costs will rise and it is important to recognize why people are charging more and then determine if our hard earned bucks are going to the right place. What is on your plate had a life before the plate and one thing I can say about Hammerheads is this: that life was one that was raised humanely. On a slightly less preachy note, the best cut for fried chicken is the whole joint wing – you get the perfect mix of white meat that is a juicy as dark. Game over – he drops the fork. 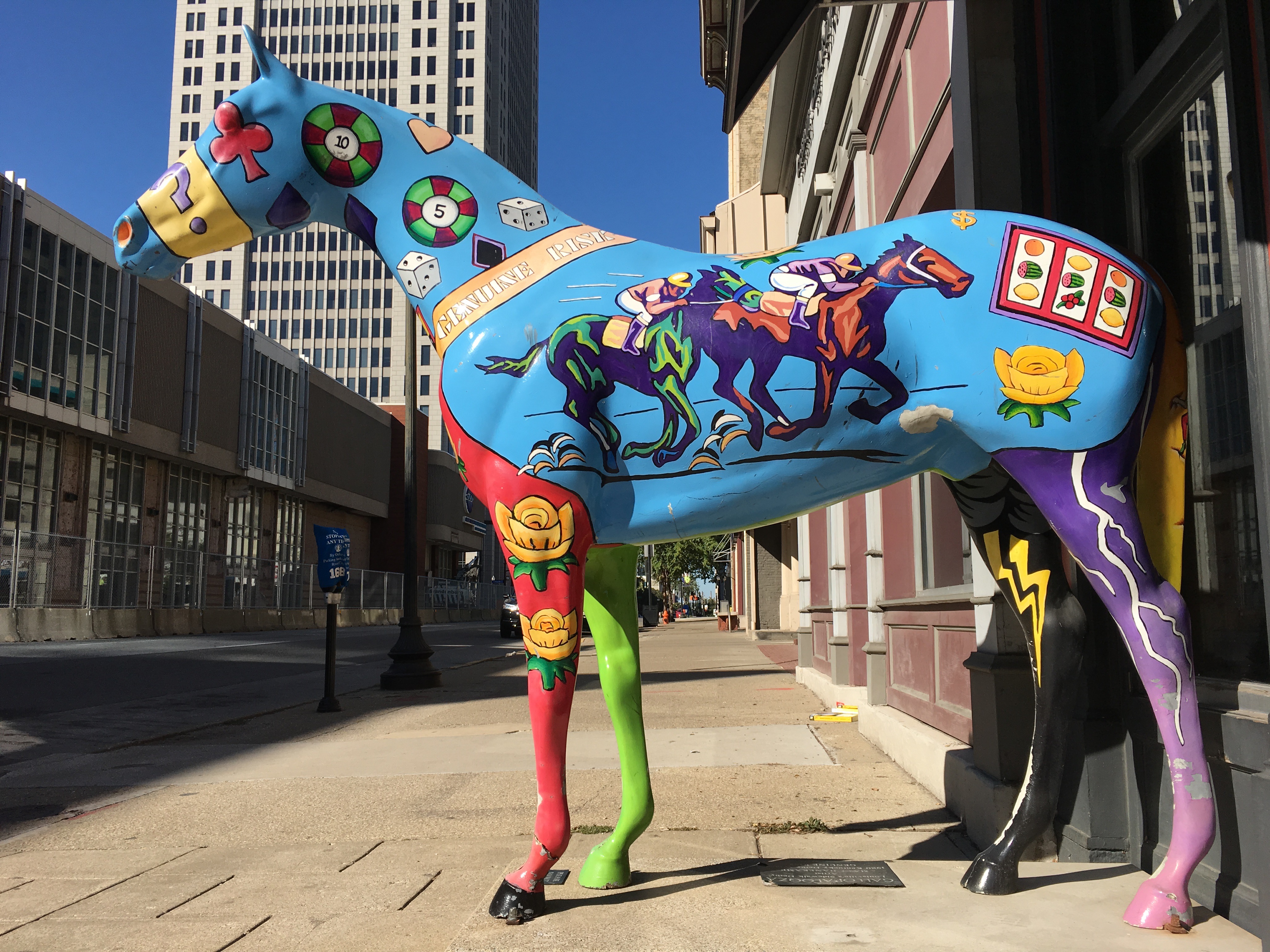 This was the closest I got to seeing a horse so you know what that means: I’m coming back Louisville!! And next time I’ll bring a little more change in my pocket. Which isn’t to say you don’t have your Cheap Eats – if anything I want to see how the other half lives and I imagine living high on the hog is a tasting endeavor in Louisville, thanks to a formidable pool of talented chefs. Of course I’ll have to let a few dollars ride on the ponies, which means I’ll need extra for some Mint Juleps to wash it down with. This is already become expensive and I’m still reminiscing on my last trip – maybe I’ll just stick to another round of Cheap Eats. I may have broken my budget by a few bucks but it is already sounding like a far better bargain than a weekend at Churchill Downs. But if that means another days worth of Super Hero pancakes, Kentucky Hot Browns, Hand Pies and farm to table fried chicken and waffles, well that’s just fine by me.