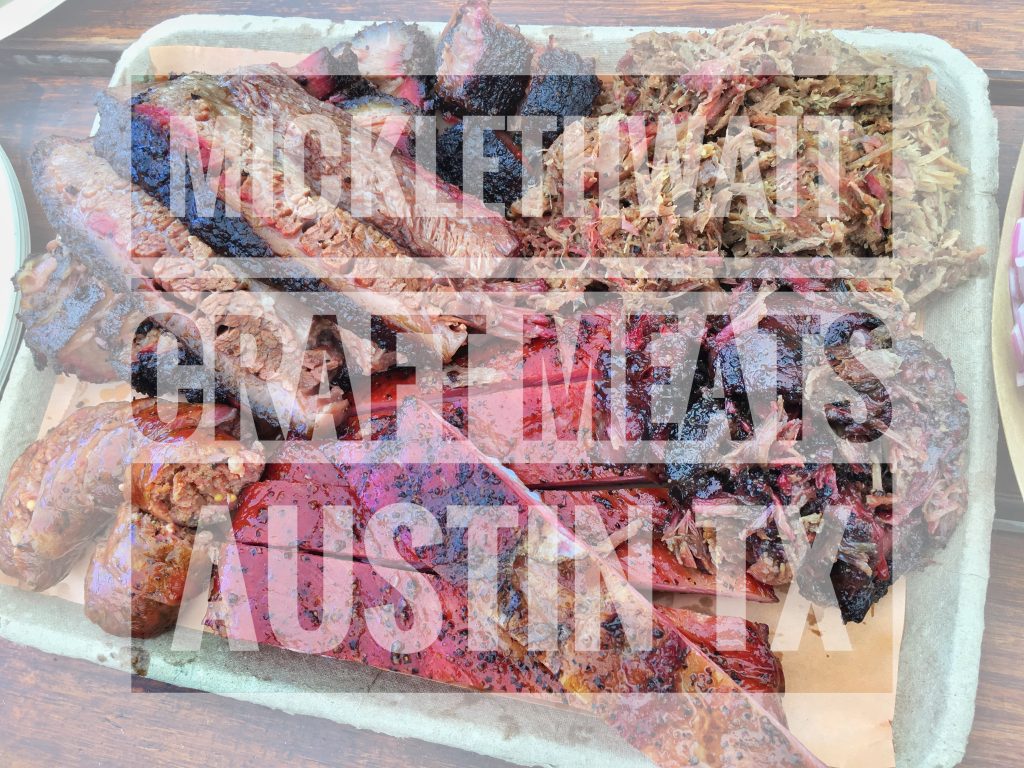 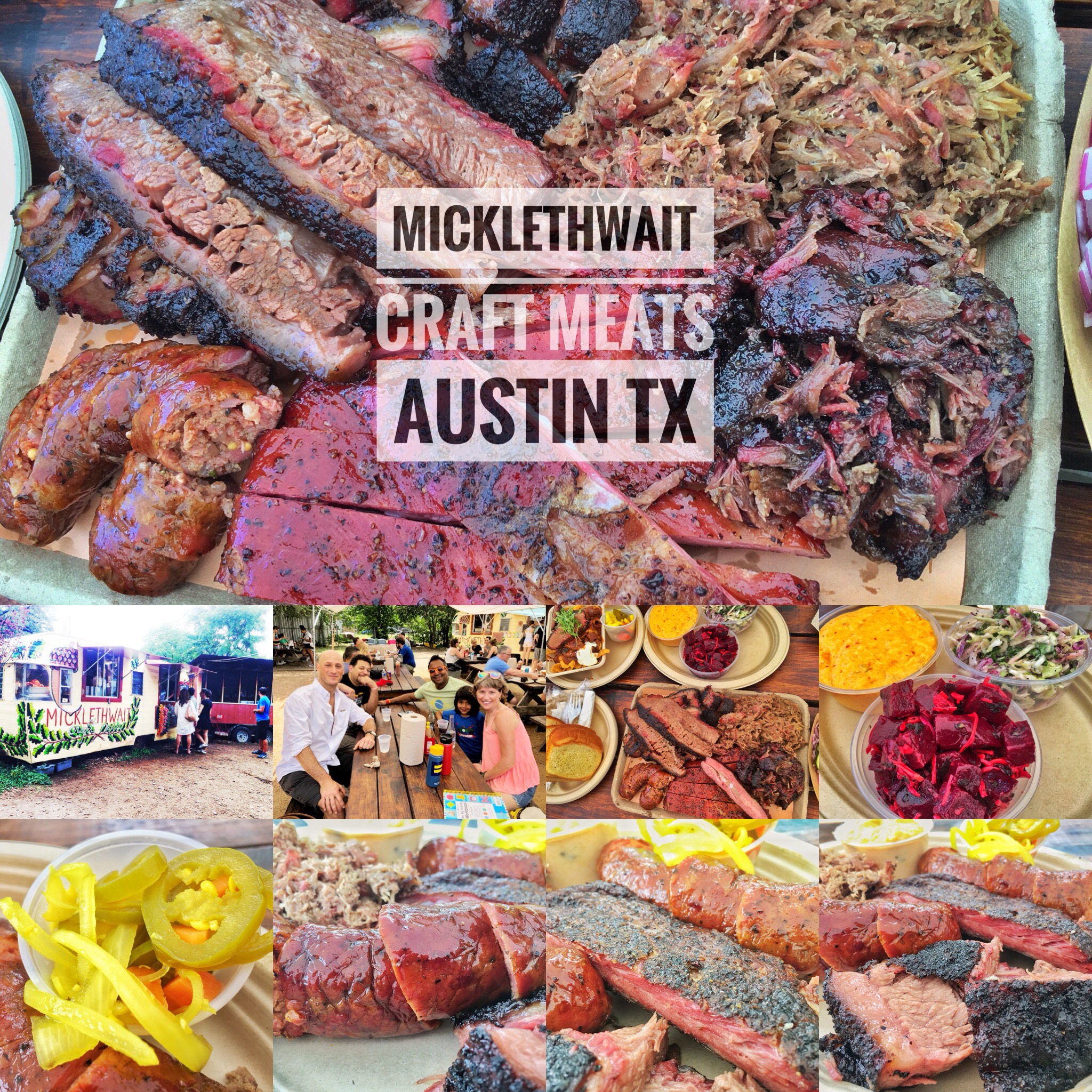 If I had a nickel every time someone visiting Austin asked “is Franklin’s worth the wait?” I would take that loot and head straight over to Micklethwait Craft Meats. The answer to the Franklin’s question is really subjective. Do you want to spend a full day waiting to eat at just one barbecue spot, in a town loaded with more smoked meat masters than even I have had time to try in 3 years of living here? Look, Franklin’s is indeed very very good. Their brisket can win over a vegan or at least a pescatarian and a little secret: their smoked turkey is one of the best things to ever have been pulled out of a smoker. But you will have to wait for hours and hours for like it was a damn job. If you have seen the post about Bang for your Brisket Buck or watched my episode on Best Thing I Ever Ate, you know my love for La Barbecue. But that too comes with a substantial wait. Enter Micklethwait Craft Meats, an East Austin food trailer slinging what I believe to be the most underrated barbecue in town. 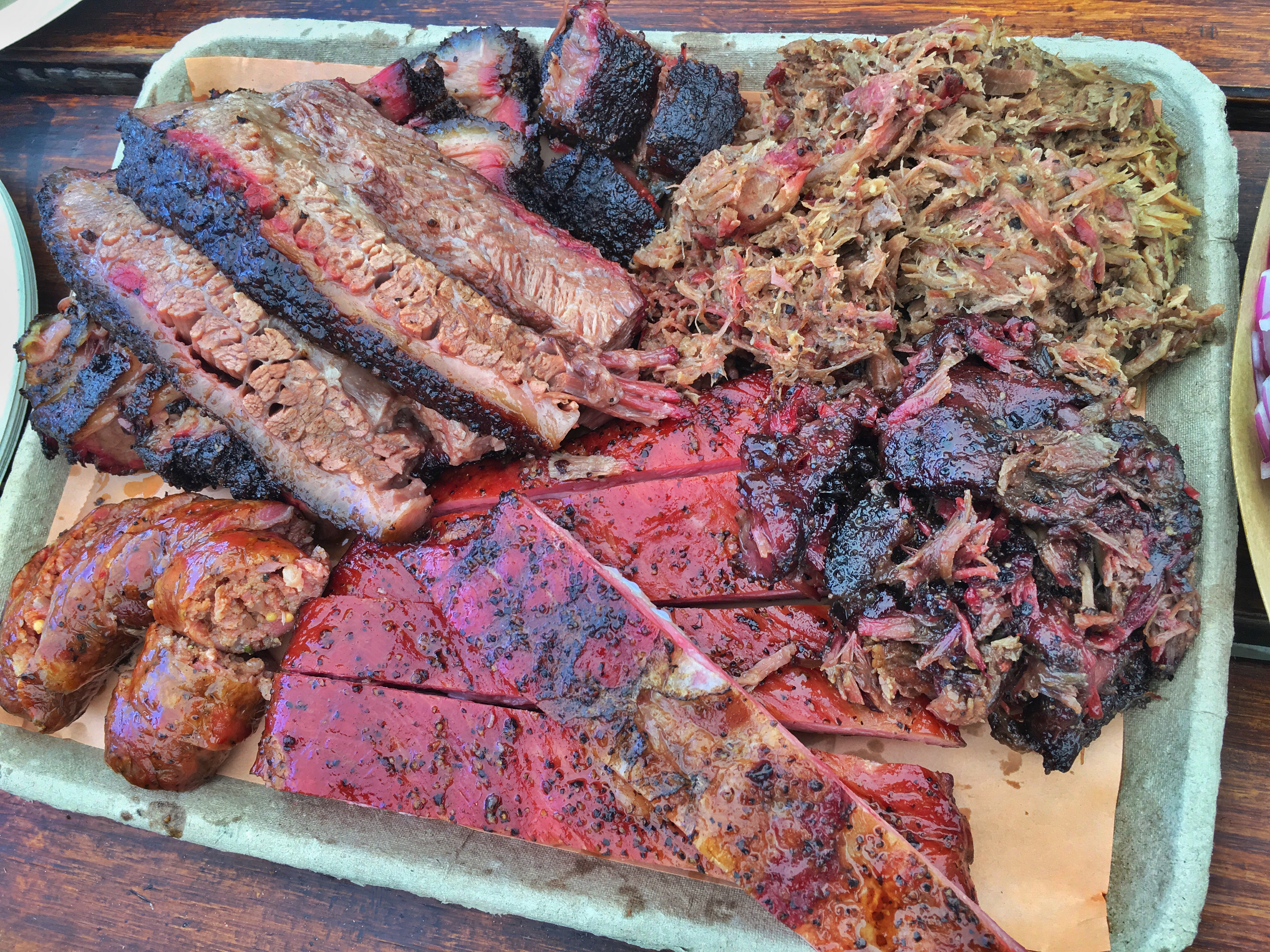 So this is what will get you into trouble at Micklethwait Craft Meats: you are going to want to order everything. And this isn’t even everything. Stand outs at Micklethwait Craft Meats are the rotating sausage menu which includes classics like Czech style as well forays into lamb and pork belly studded Andouille. Then there are true game changers like pulled lamb and beef barbacoa; which if you have not had is a dry smoked version of the Mexican the slow cooked meat that is a staple in Texas as well. Finally there is the ubiquitous brisket that is the measure of every great barbecue joint in the Lone Star State. But brisket is just the tip of the meaty iceberg at Micklethwait Craft Meat. 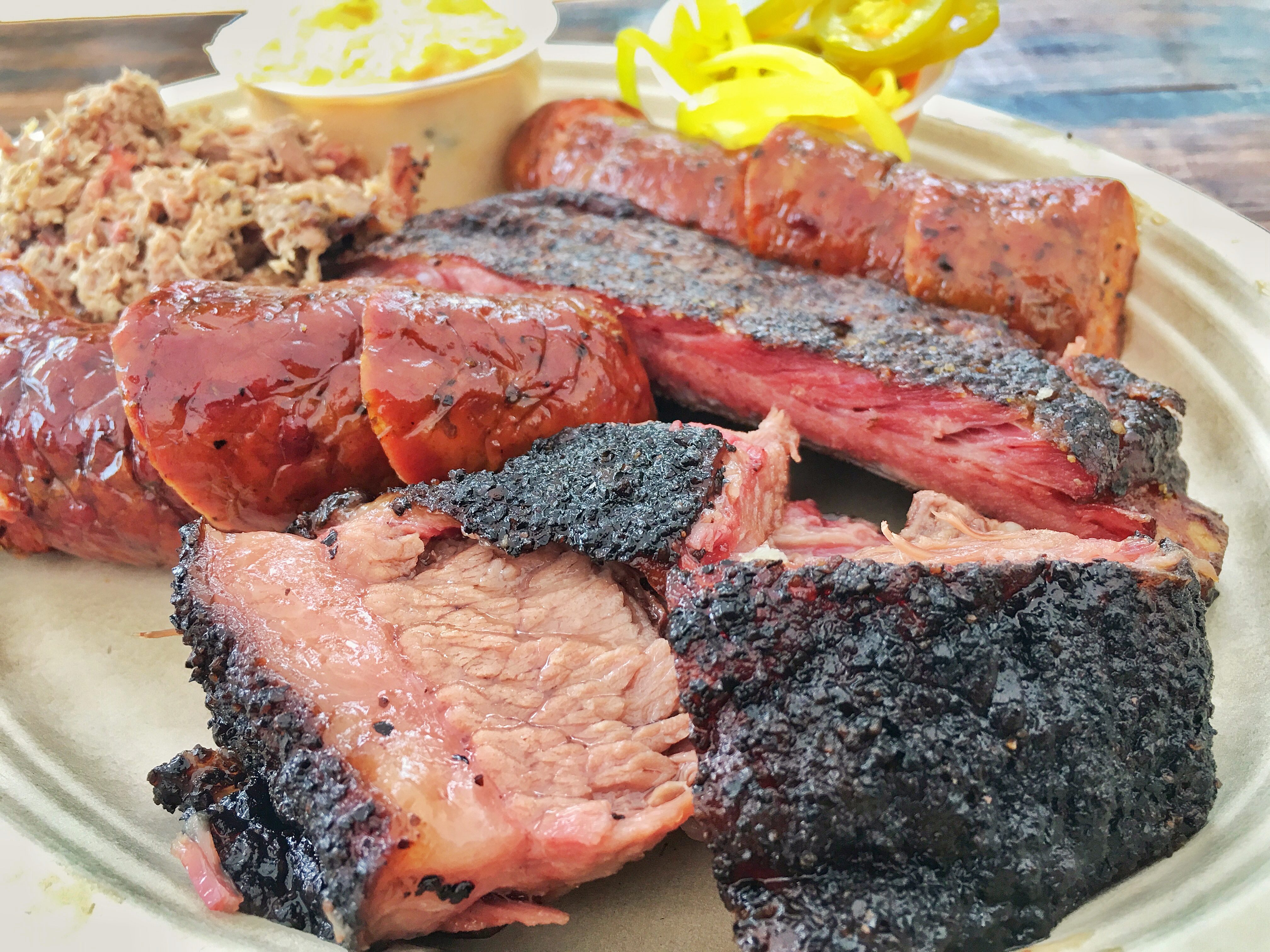 But what a brisket. With a heavy coating of multiple spices, the brisket rub at Micklethwait Craft Meats ain’t your typical mix of salt and pepper like one finds at Franklin or Louie Mueller. Bonded with the smoke of post oak and familiar seasonings like mustard powder, garlic powder and black pepper, close your eyes and focus your chi like Iron Fist and you might also get a subtle hint of coriander and celery seed as well as a kick of heat from the chili flake. A complex bark for sure, and as far as the bite goes? This is the brisket people talk about across the country about. If you are jonesing for a brisket fix, it doesn’t really get much better than this. 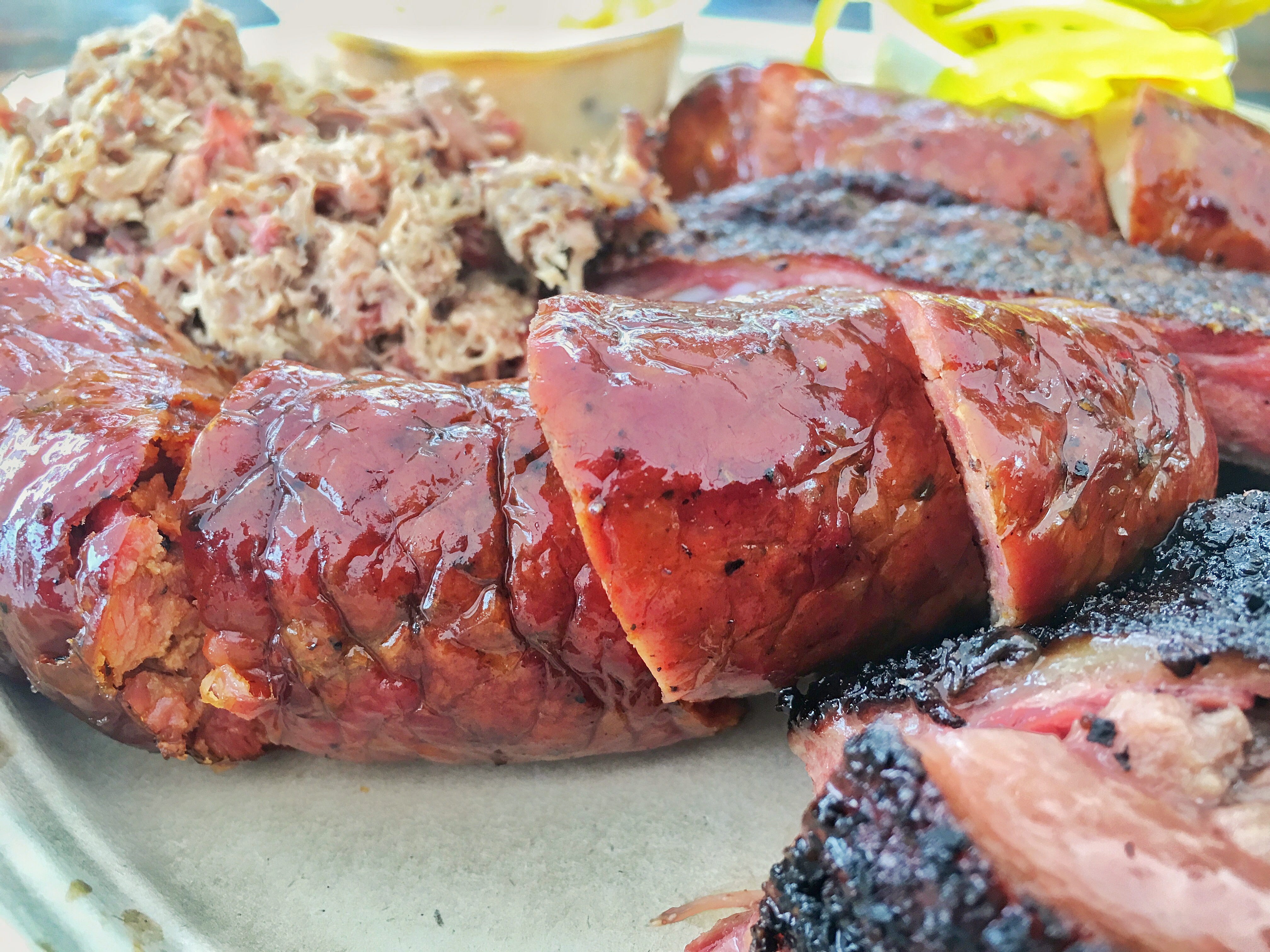 Sausage can be cheap filler or it can be the sign of a master butcher. The latter entails one making your own sausage which is the case at Micklethwait. In my backyard, an indulgent meat feast meal will include both grilled sausage and steak a la an Argentinian Asado. Cooking a steak to a perfect temp seems obvious but the the same holds true for sausage as well. I dug up an Eater article which states that Pitmaster Tom Micklethwait cooks his links to 155-160 degrees. Since he is making the sausages himself, he can afford the calculated risk of cooking pork to a temp that some might feel uncomfortable doing at home(for the record I cooked a Pork Shoulder roast last night to 135 because I got mine from a top quality butcher). Not only is the link juicy but the snap is incredible thanks to the natural casings Micklethwait Craft Meats uses. The meat is coarse ground, my preference for sure, but the key at Micklthwait Craft Meats is that the sausage is smoked to a perfect temp. That plus the rotating sausage menu make these links a must order. 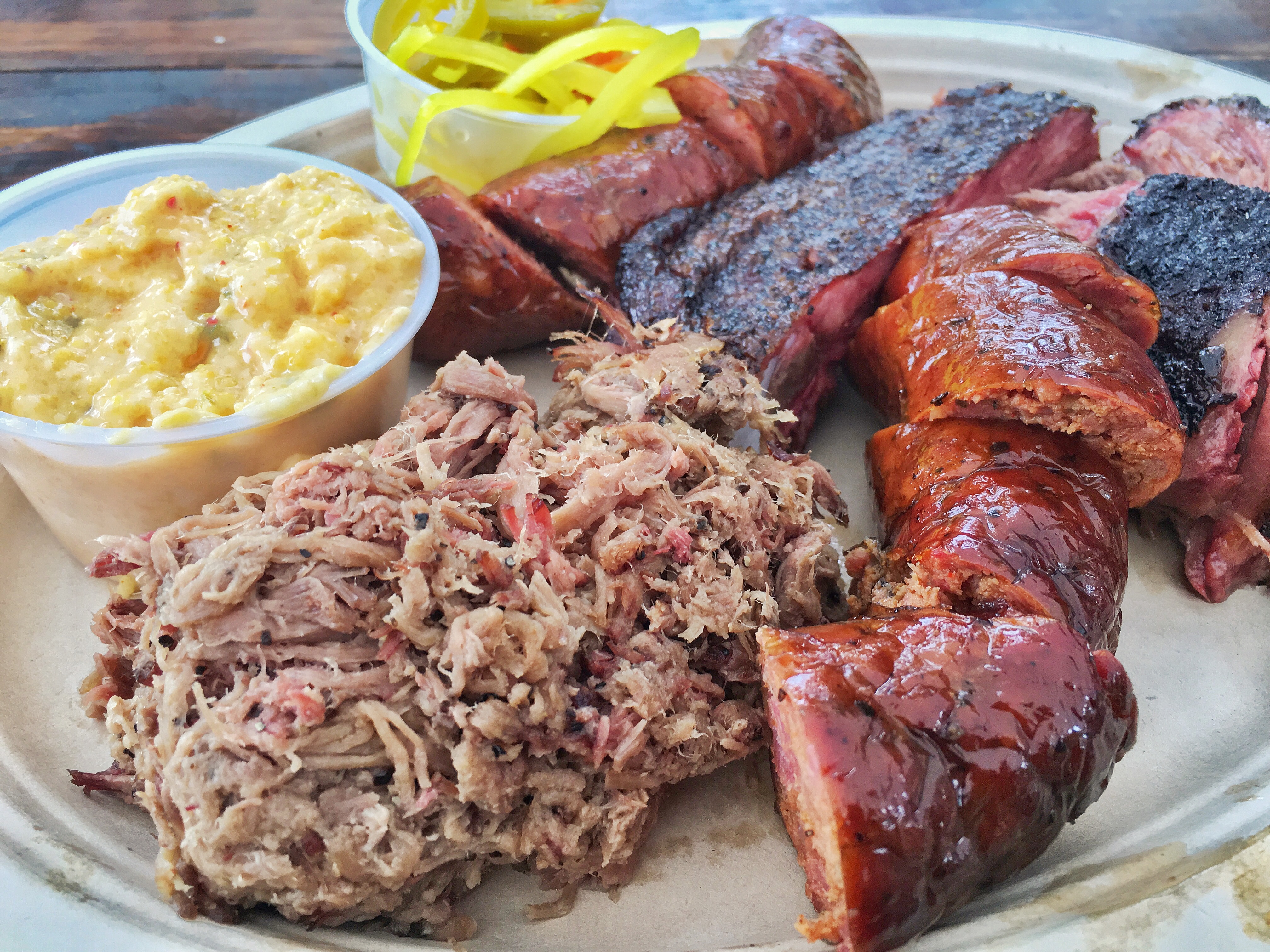 Then there is the pulled lamb. Growing up in a South Asian household, lamb was part of of the meat program so I have never cast any aspersions to this “other red meat” but I am also no stranger to the general hesitancy many have. The gaminess associated with lamb comes from the fat, which in smoked versions has been well rendered. Now remember that rub for the brisket? With all that coriander, mustard powder and chili flake, there is no shot for this lamb to be under seasoned.  When I took my first bite I could not put my fork down. There a few places to get top shelf brisket in town but pulled lamb from a Texas BBQ pit? That is as exotic as it sounds. Tender, moist, with a slight sweetness  brought on from the kiss of post oak, the pulled lamb at Micklethwait Craft Meats is the best thing on the menu. 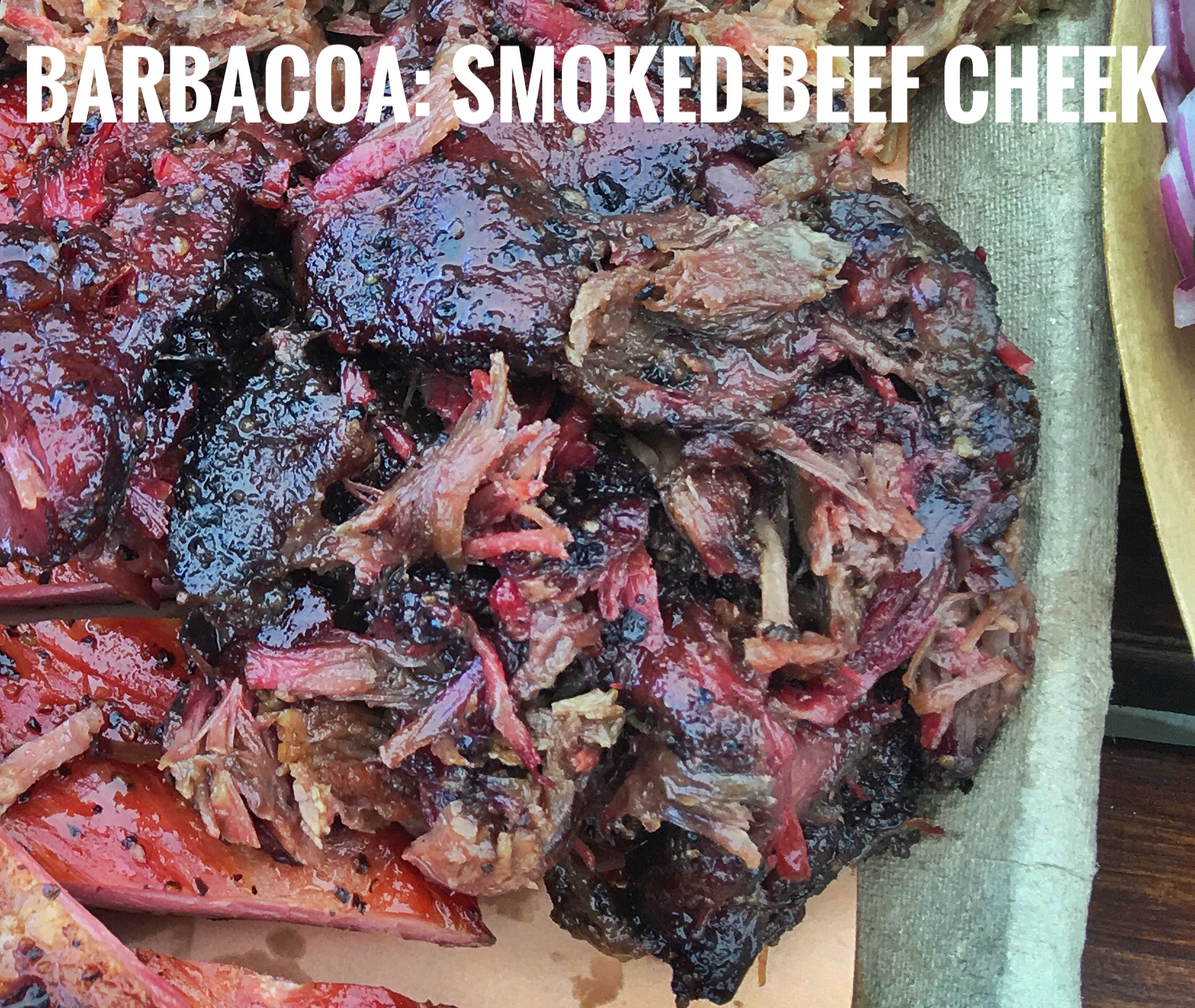 The first time I encountered cheek was on a tasting menu some 16 years ago at a long since shuttered 5 star type restaurant. In a meal that included lobster and fresh made pastas, the braised veal cheek was my hands down favorite. My second encounter was six years later at a dimly lit street corner taco stand I stumbled into after a wine tasting that digressed into wine drinking. The latter experience would be repeated often. Though the plating was lacking when compared to the first, my beef cheek tacos were close enough to the veal I had back in that elaborate dining hall, and at a fraction of the price. Then I came to Texas. Down here, beef cheeks are cooked “barbacoa” style which in pre Hispanic times meant cooked in a pit underground, wrapped in Maguey(cactus) leaves. Modern times allow for steamed versions via pressure cookers and modern tastes can incorporate different cuts as well like brisket or shoulder clod. But the cheek is the jam. It’s fattiest of the bunch but not possessive of the funk one gets from say lengua(tongue). These cheeks are smoked and while meltingly tender, I can’t say the smoker triumphs over the ancient method of steam and smoke found in the traditional method of preparation. Though the beef cheeks at Micklethwait Craft Meats take second place after the pulled lamb, this kind of “exotic” barbecue is exactly why you are here. 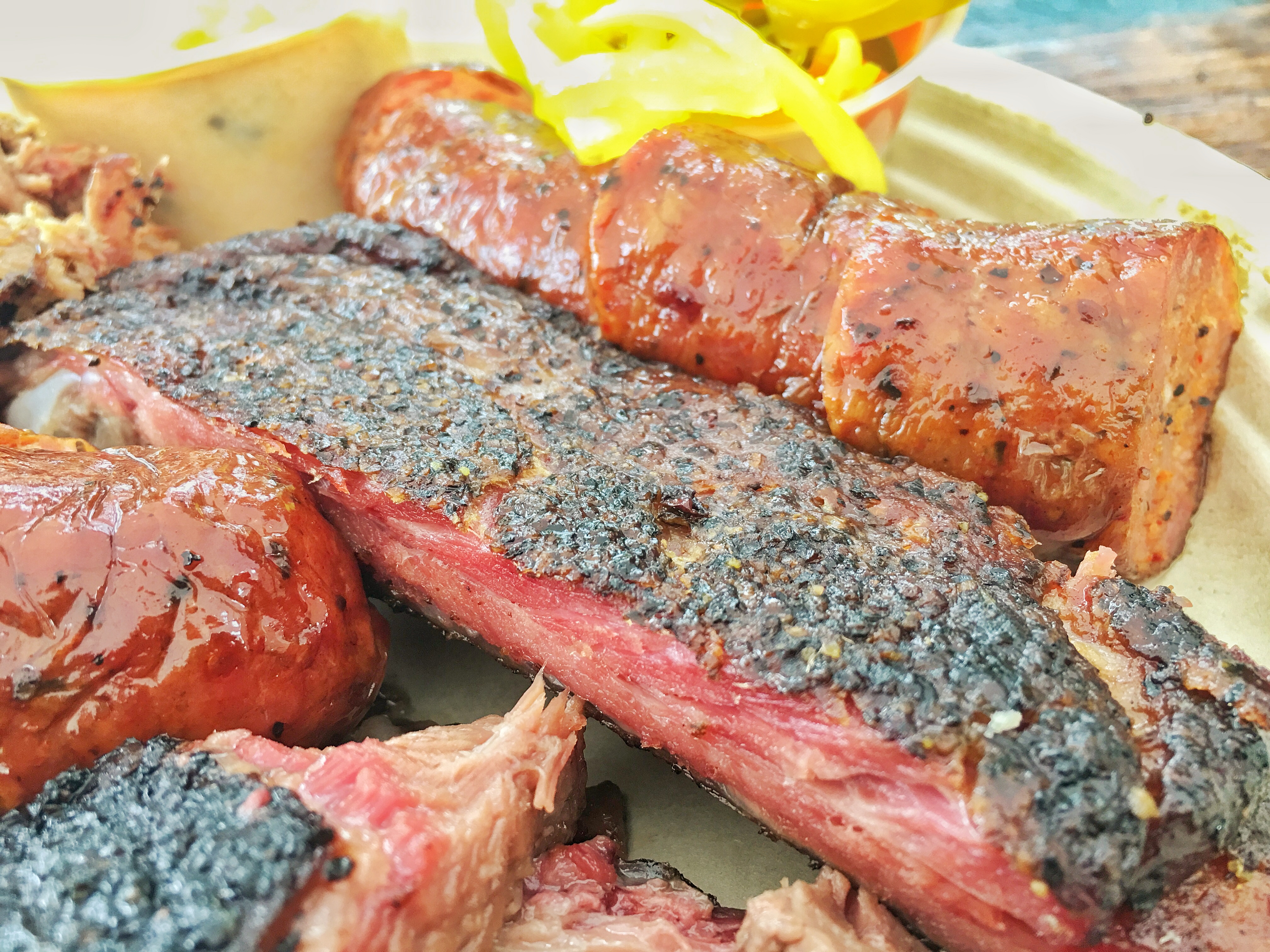 As much as I can raise my nose at the superiority of brisket in the state of Texas versus the rest of the country, I must also concede that this is not that land of spareribs.  Yes, spareribs, along with brisket and sausage, are certainly part of the Texas Trinity of BBQ, but their mastery belongs elsewhere, usually in states where fruit woods are part of the smoker equation. Still, when compared to pricey beef ribs, it is hard to say no to these spareribs, especially with a bark like that. This is meat to round out the meal at Micklethwait Craft Meats on value alone. And if the above is considered filler, you are eating damn well. 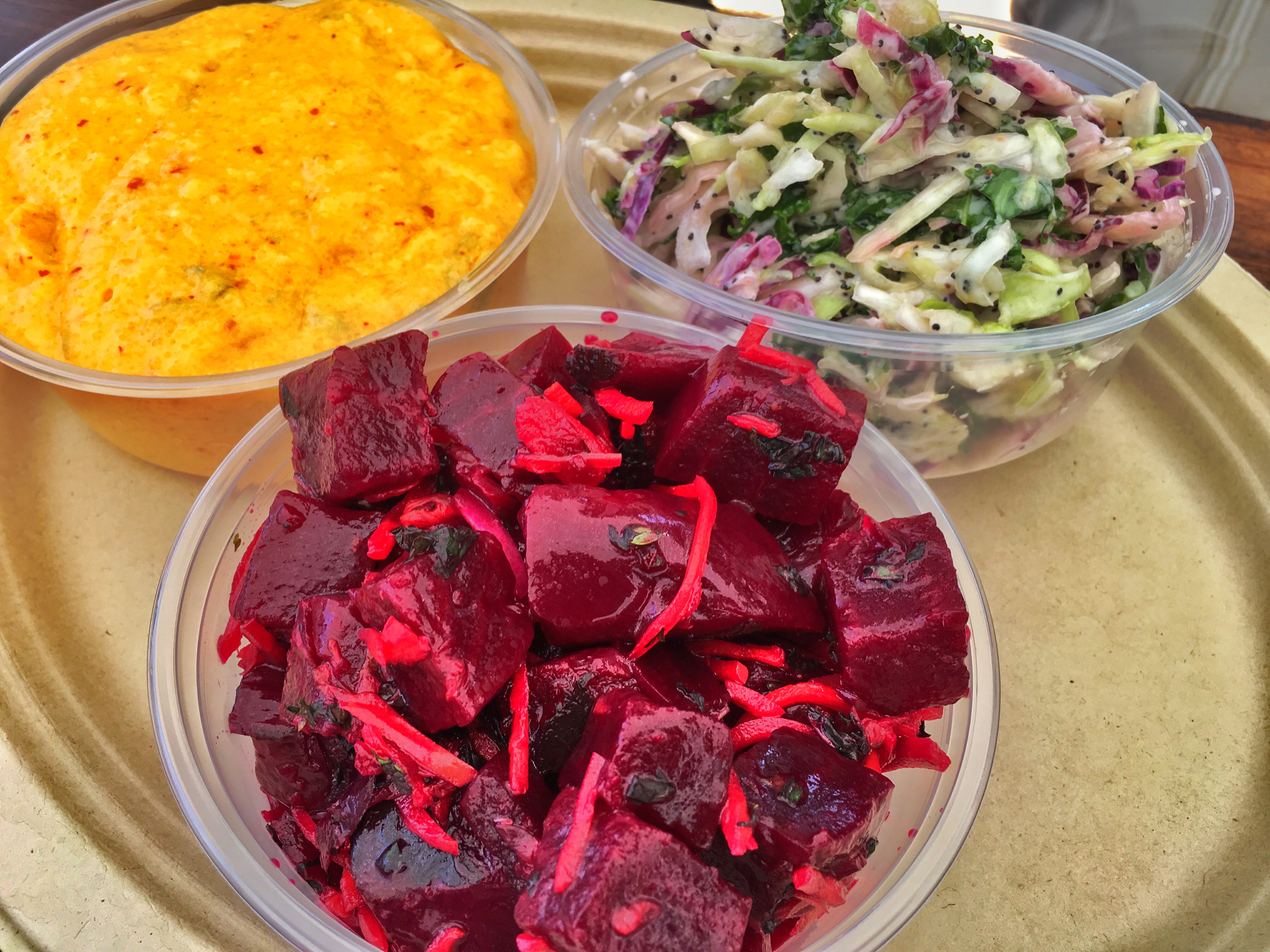 Do some digging about the great state of barbecue in Austin and you will find that the sides game is anything but a side dish. You could take a vegetarian to Micklethait Craft Meats and they would have a very good meal, especially with the roasted beet salad, the jalapeño cheese grits and the lemon poppy salad. They all make for fine pairings with the smoked meats but are certainly stand out dishes on their own. Usually when one finds sides of this caliber at a bbq joint in Austin it is indicative of a fine dining stint or two on the resume. Before manning the pits at Micklethwait Craft Meats, Tom Micklethwait manned the ovens as a baker at Vespaio, the slightly upscale restaurant just south of downtown Austin. Which is why the complimentary slices of white bread aren’t from Wonder but are made in house, though off site. 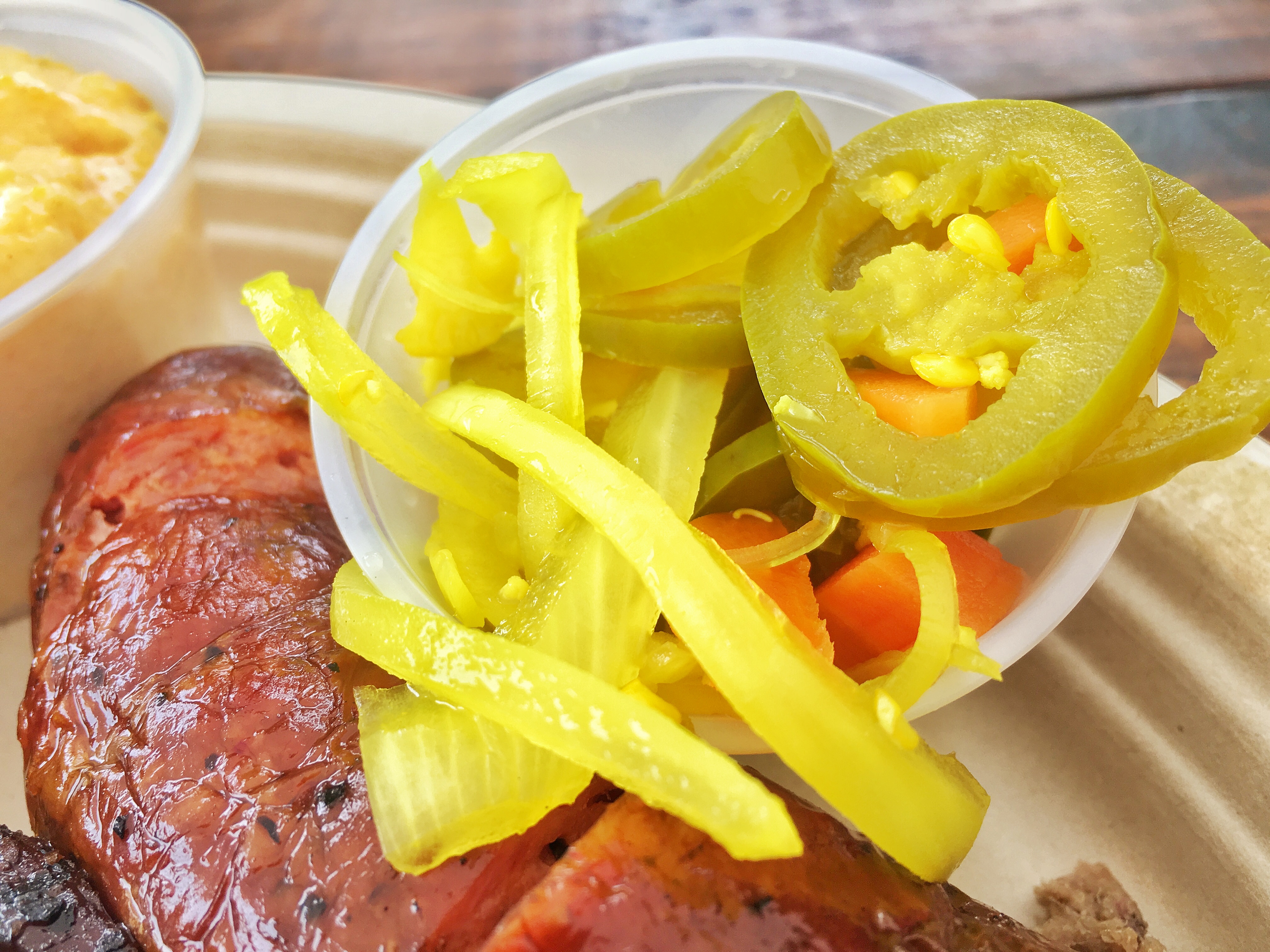 That escabeche though, that could be the best side of them all and its on the house. I seldom reach for barbecue sauce but I’ll take a combo pickled jalapeño, onion and carrot every time I’m at a barbecue joint. You get the acidity and heat from a spicy vinegar based bbq sauce but with little chance of smothering the meat with it. Like ginger at sushi, you could call it a palate cleanser but I see it as a bite of meat enhancer. 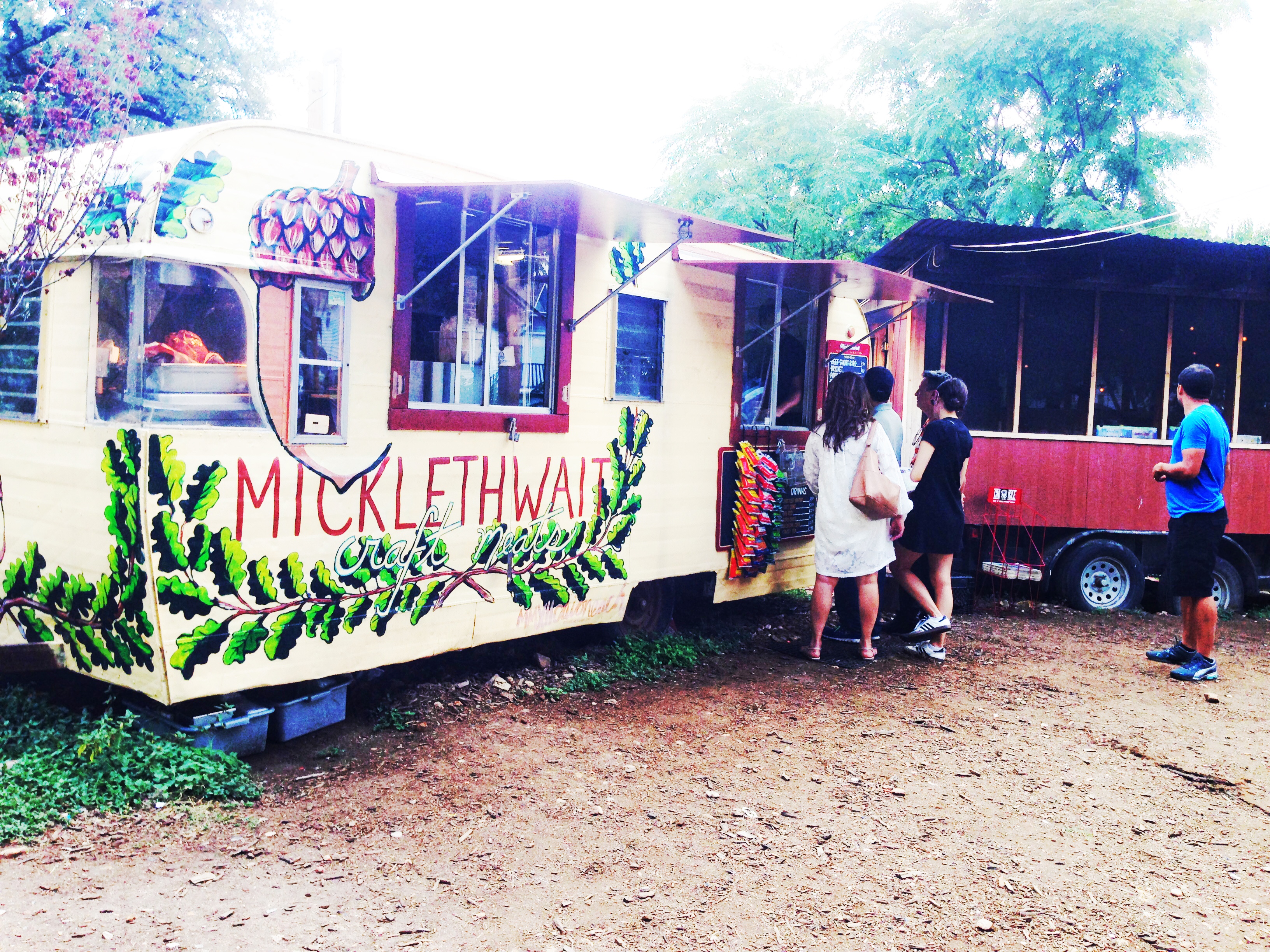 Yes my friends, Micklthewait Craft Meats is indeed the most underrated barbecue place in Austin as indicated by modest lines but heed this warning: time ain’t on your side. With a go time of 11am, these guys sell out – especially the barbacoa so don’t lag on getting over to this little trailer in central East Austin. You will be rewarded well. 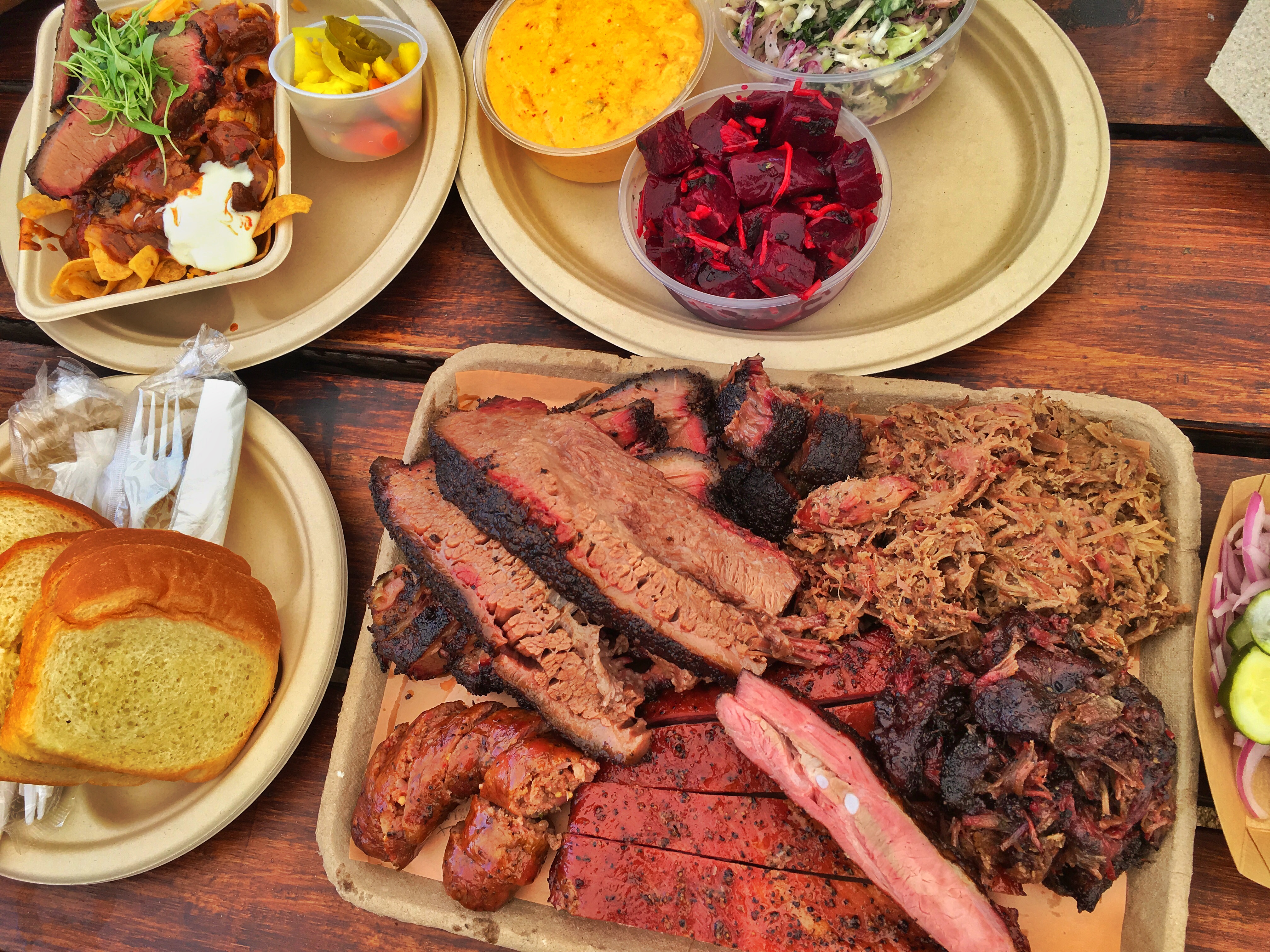